Evolution of our Kitchen Makeover

Now that we’ve been living in our home in Minnesota for four years, I thought I would share how some of the rooms have evolved since we moved in.  I did an “evolution” series on my last home (you can see the kitchen evolution post of our previous home HERE) and received so many great comments and feedback in response.  It was fun for readers to see the transformation all in one place while also appreciating how long a real-world makeover can take.  Some rooms come together quickly, but most rooms in most homes just evolve over the years.  Room makeovers aren’t really a before and after, but more of a then and now.  They will continue to be dynamic and evolve.  So, here is our kitchen makeover as it happened over the past four years.

This photo was taken the very first day we were in the house.  (You can read our amazing moving story HERE.)  We had literally just brought in the contents of the van and were getting settled with what we had until the two containers holding our stuff were delivered.  Now that I think about it, is it a normal thing to take your vacuum with you in the car instead of just putting it in the moving truck?  I guess I knew that cleaning would be the last thing in the old house and the first thing in the new house, so I wanted to have all of my go-to cleaning supplies. 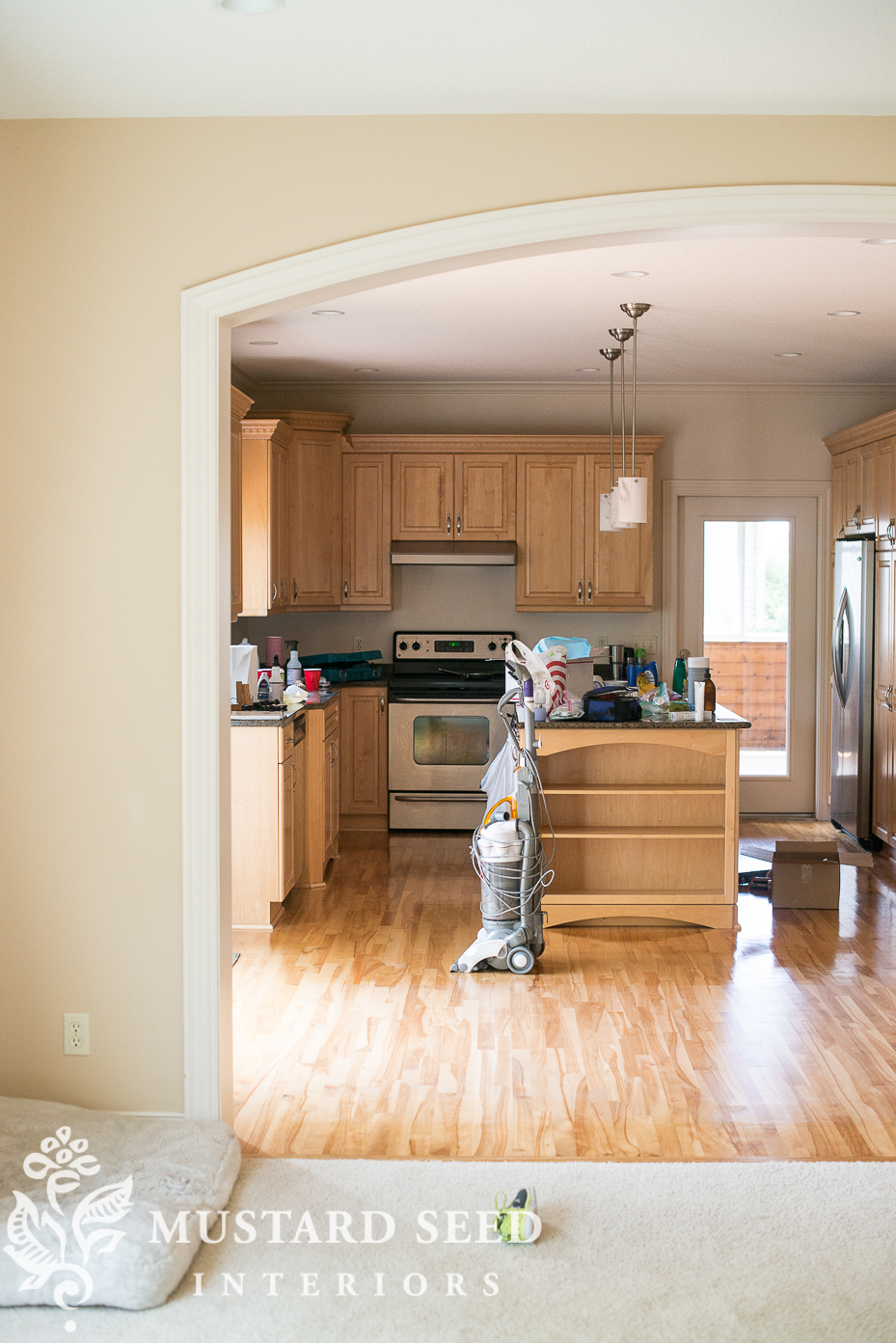 I actually really liked this kitchen initially.  I partly wanted a kitchen that was a total redo so I could design it myself around antique freestanding pieces, but that wasn’t going to happen in this house.  This kitchen was sturdy and in great shape.  It had a wonderful layout, plenty of storage, nice cabinetry, and I love the wood floors.  The changes I wanted to make in the room were almost entirely cosmetic.  Sure, we could’ve (and still could) remove the upper cabinets and do some built-in opening shelving, build a range hood, etc., but that just didn’t feel necessary for this kitchen.  This cabinet layout feels right for the style and surban setting of the house.  You can see a full tour of the kitchen when we first moved in HERE. 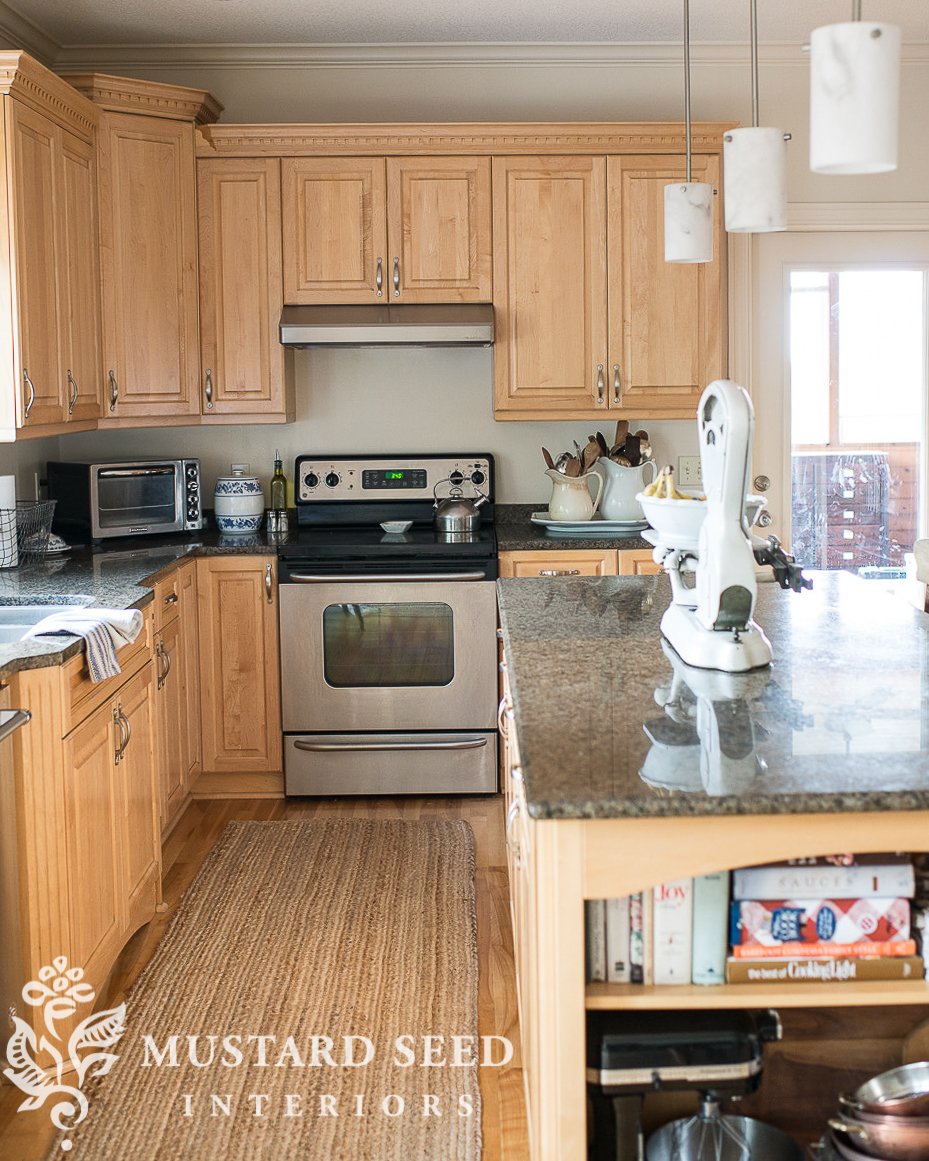 One of the first customizations we made was finding a hidden spot for the microwave.  I did not want to give up counter space for such a bulky appliance and I was determined to find an out-of-the-way place to put it. 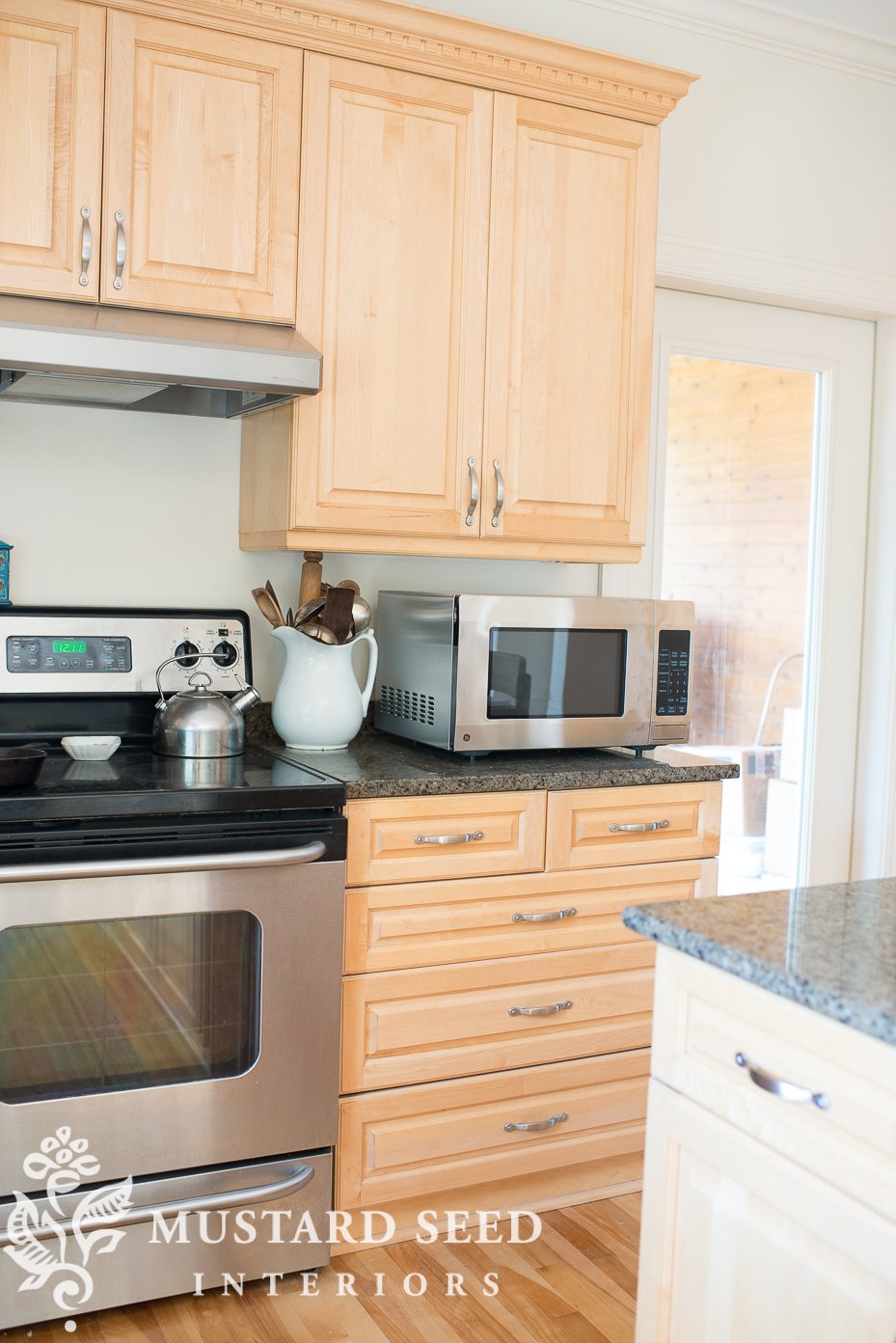 We ended up removing a shelf from the pantry and put it in there.  Fortunately, there was an electrical outlet for some above-cabinet rope lighting.  We’ve had it in the pantry for four years and it’s worked out great.  We keep the doors open when we’re cooking anything, which is 10-15 minutes at most for steaming vegetables.  You can read the original post about moving the microwave HERE. 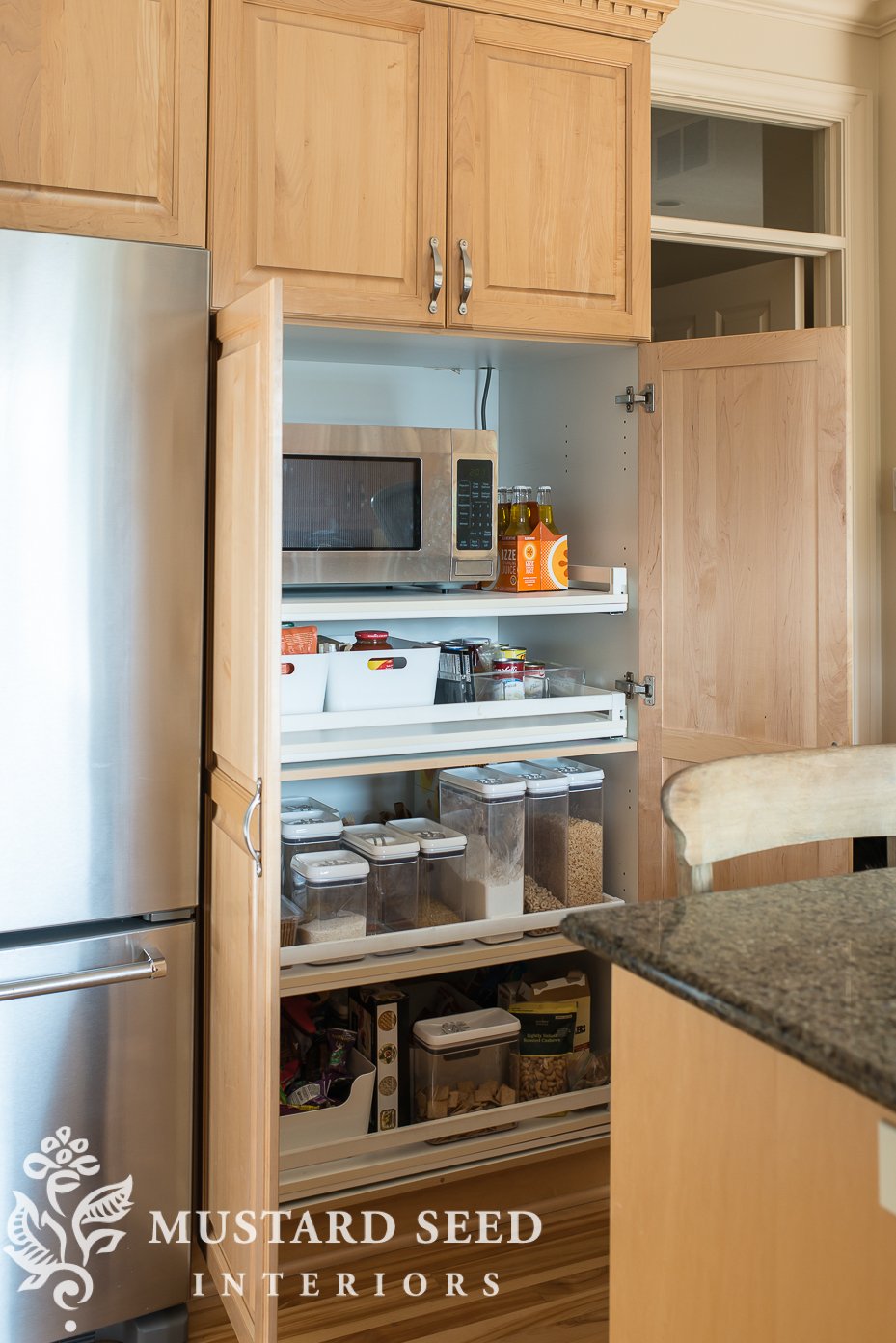 The other thing that happened almost right away was replacing the appliances.  THIS is the dishwasher we bought and THIS is the fridge.  We had them ordered before we moved in, so the fridge and dishwasher were delivered our second day in the house.  Both were over 13 years old and both were damaged.  We were replacing the stove, too, but that took longer to arrive and we needed to have some work done to switch from an electric stove to a dual fuel range.  I’ll share more on that in a minute. 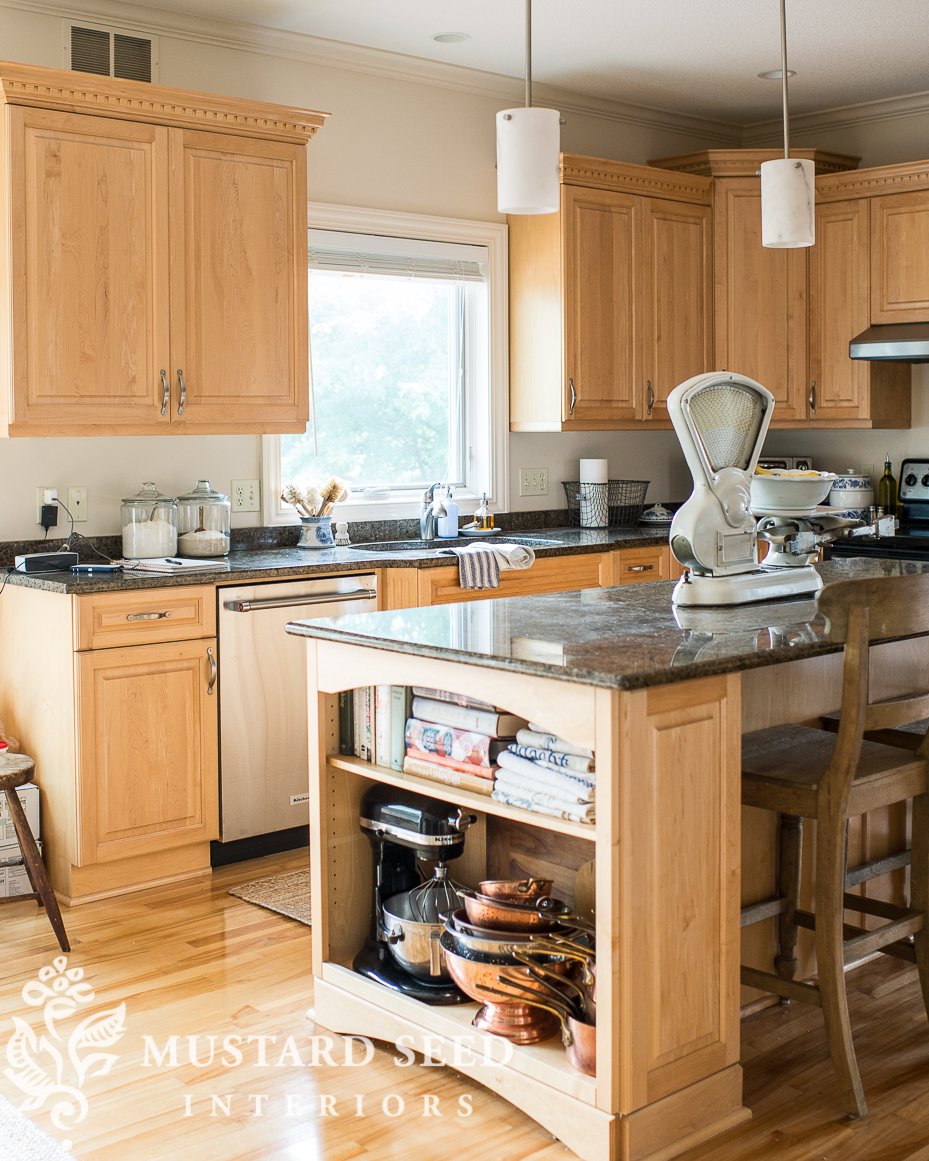 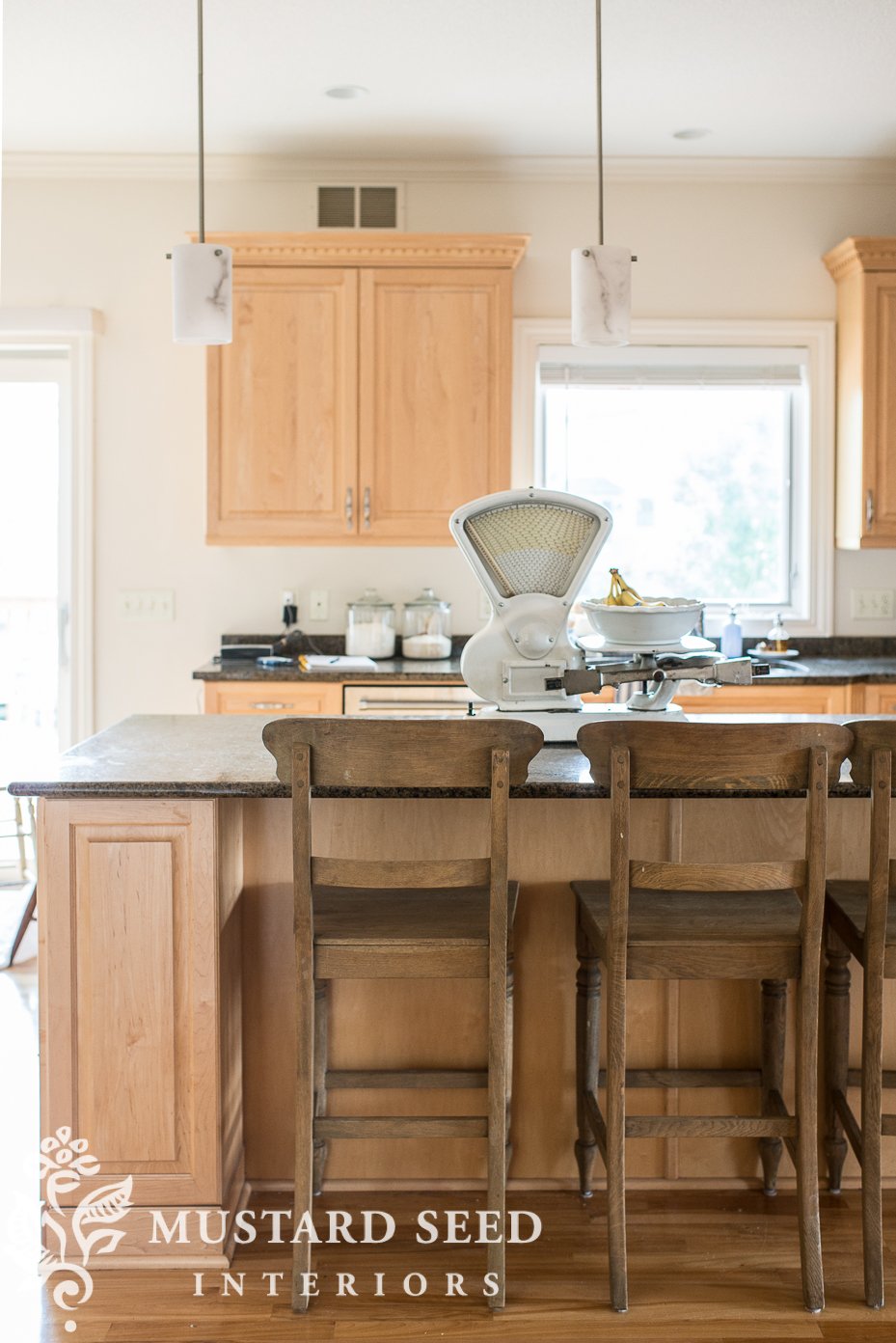 The other things on the initial to-do list were to swap out the modern pendant lights, hang my pot rack, and add some shelving to the awkward niche between the door to the laundry room and the butler’s pantry. 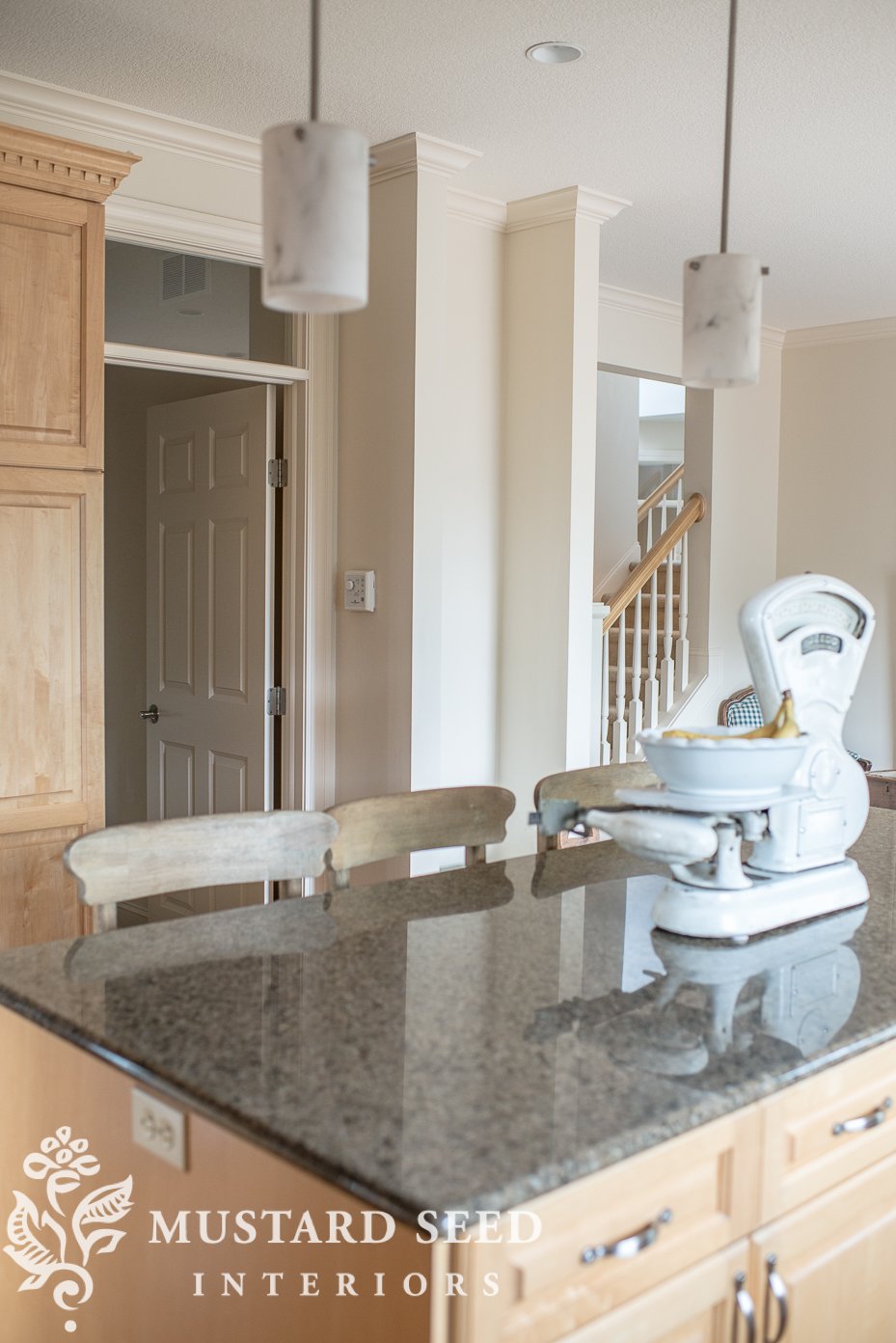 Here we are in the middle of full-on unpacking mode.  Those first couple of weeks in a house are so chaotic and exciting, aren’t they?  I really do think it takes a few years to really find your legs in a new house. 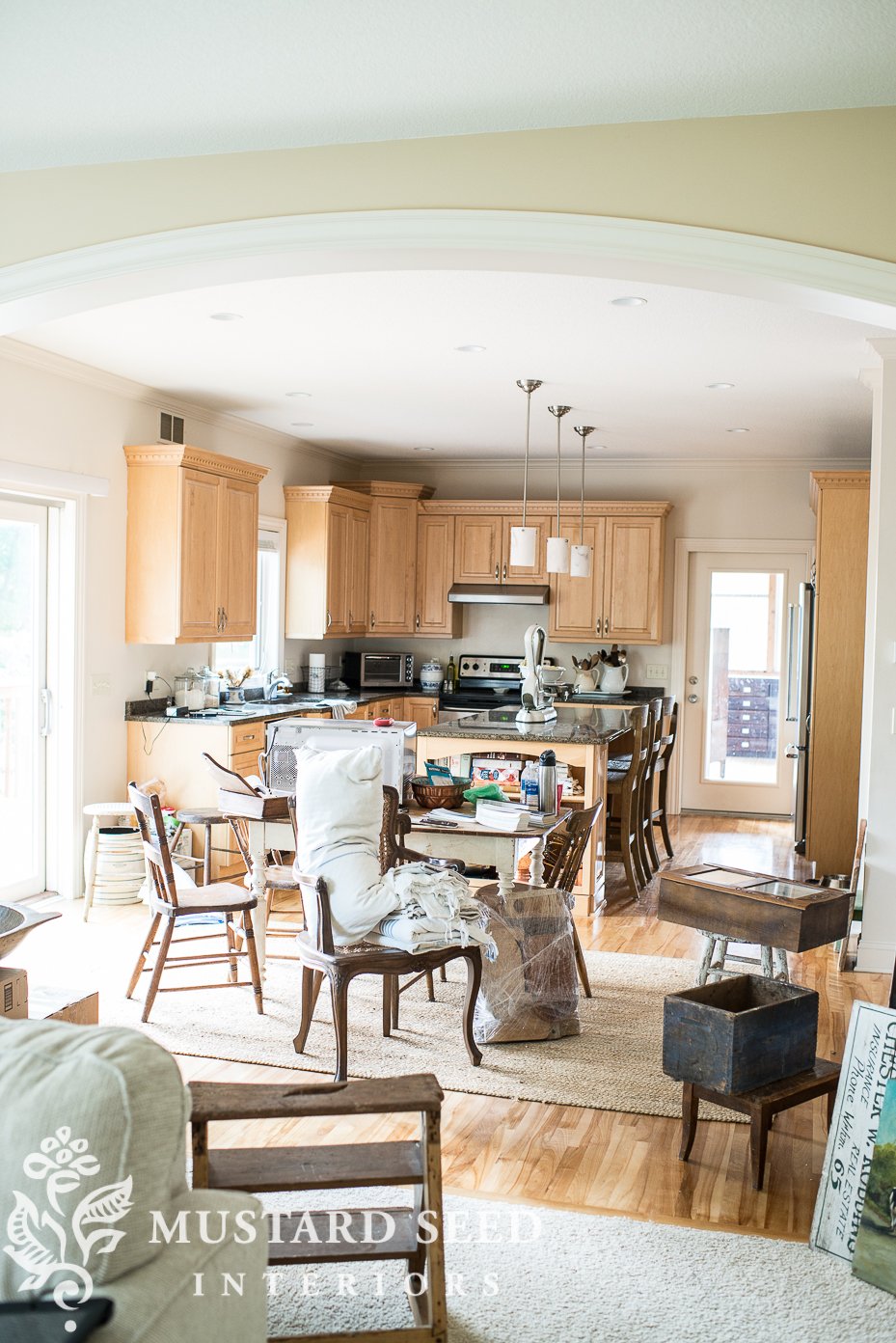 My brother and parents came to visit after we had just been in the house for a couple of weeks and they helped us knock out a bunch of projects, including swapping out the lights and hanging the pot rack.  My mom bought me THIS pot rack as a house-warming gift when we moved into our PA house and I was pretty determined to use it again.  It’s one of those things that makes a kitchen feel like it’s my kitchen.  And it provides incredible storage.  We actually use it to hang our everyday pots and pans, which is very handy and practical. 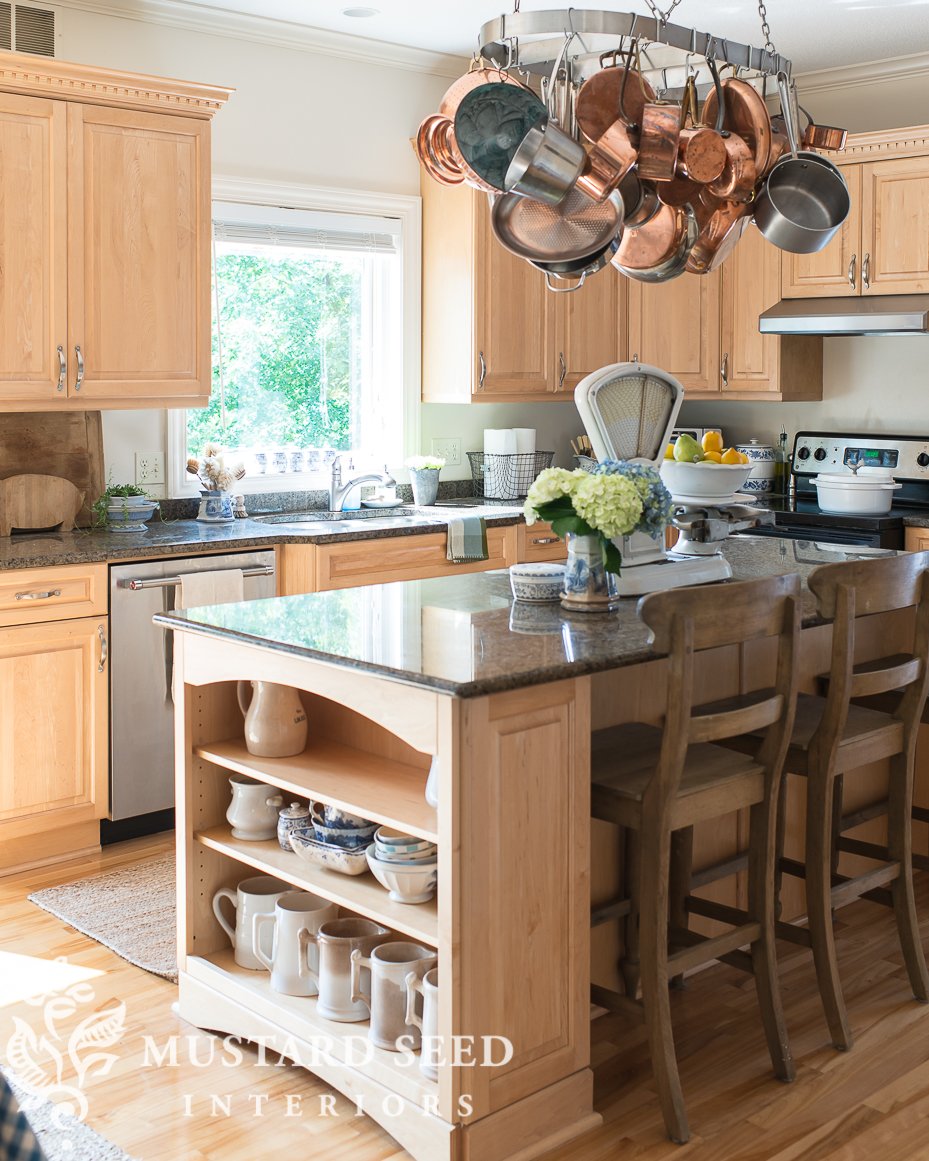 And I love the warmth and shine the copper adds.  You can read how we swapped out the lights and hung the pot rack in THIS POST. 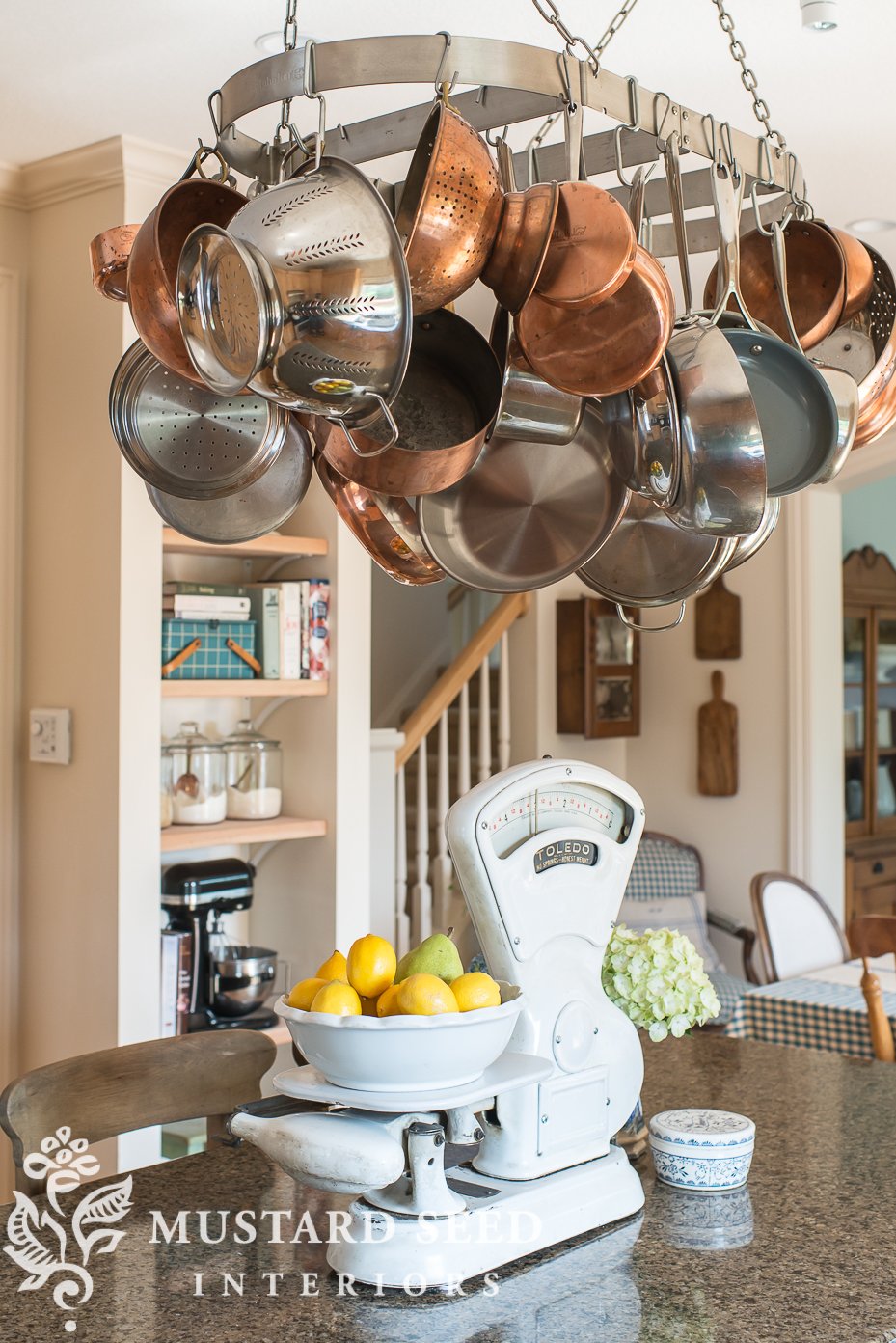 This niche was the perfect place to add some shelving and we kept it simple by using metal brackets and pieces of chunky 2 x 12″ boards.  You can read how we installed them HERE. 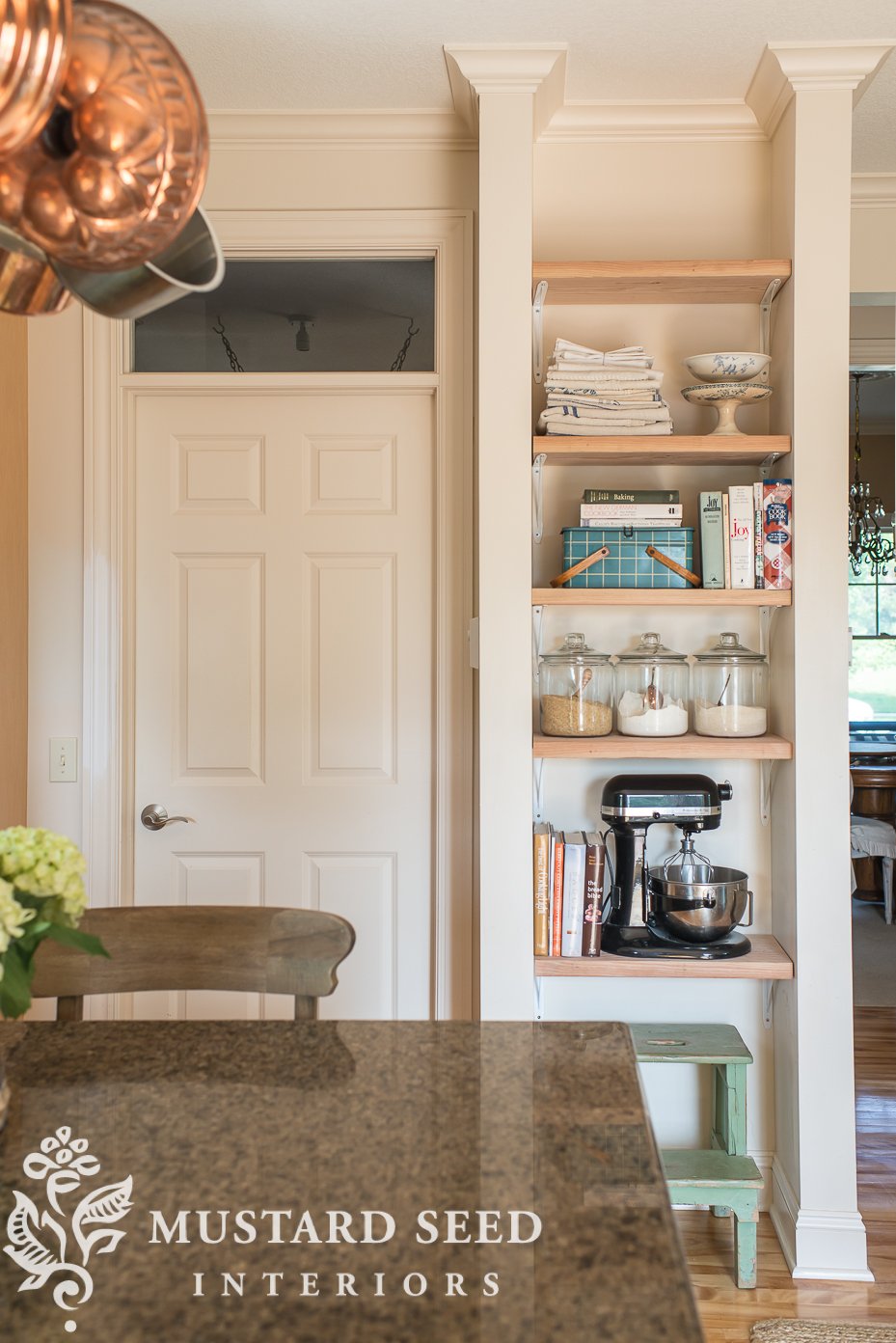 I have used the heck out of that shelving for the past four years and it was such a cheap and quick part of creating custom storage in this kitchen makeover.  It gave me a place to store my Kitchen Aid mixer, a place to tuck a step stool and a place to display cookbooks, folded linens, and dry goods in jars.

The kitchen was feeling a bit more like ours, but there was one big project on the list that I wanted to get done before our first winter in Minnesota closed in – paint the cabinets. 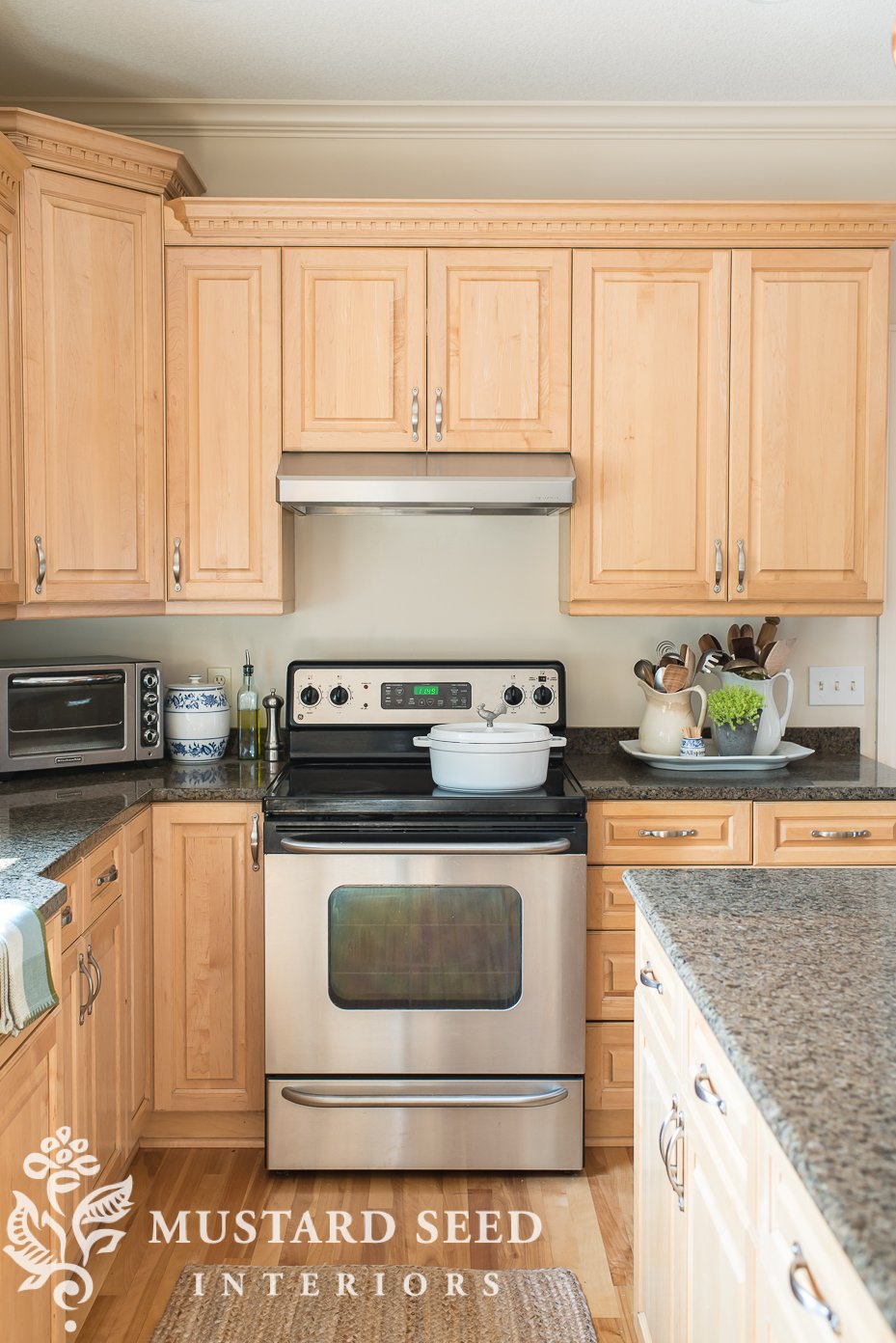 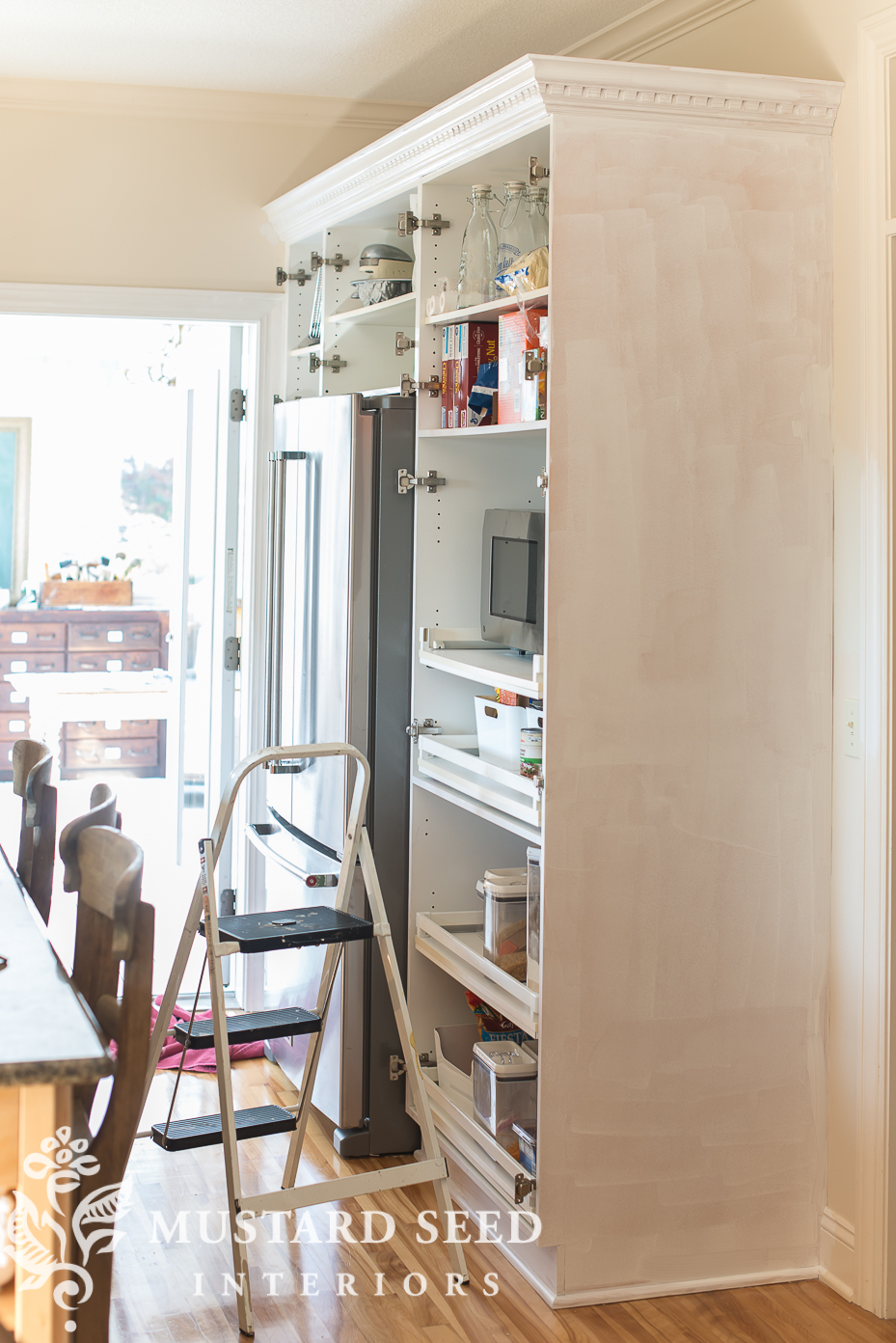 Midway through the cabinet painting, my new Dual Fuel Kitchen Aid range was delivered!  We had to have a gas line run in order to install it (which involved putting two holes in the guest room wall and closet), but it was something we planned for even before we moved in.  A gas range was one of the things on my must-have list and it was worth a couple of holes in the wall to make it happen.  The range I purchased is retired, but THIS one looks like the updated version.

I have loved this range and I’m so glad we splurged on a practical appliance we use every day.  Not only is it a pretty centerpiece surrounded by the white cabinets, but it’s such a hard-working range. 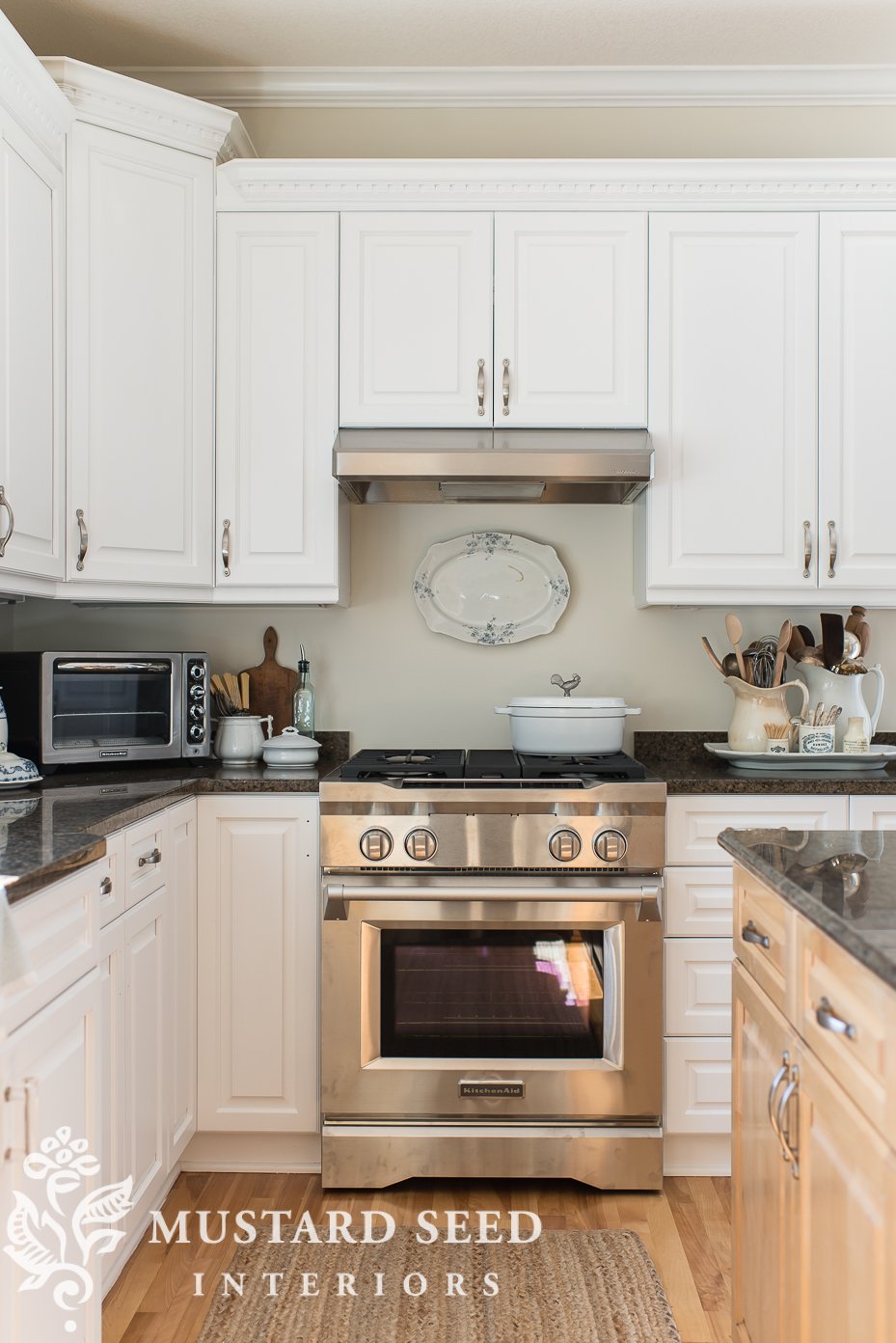 Once the cabinets were painted, which was arguably the most impactful part of this kitchen makeover, I replaced the modern cabinet hardware with these glass knobs that had a more vintage vibe.  These knobs are not rated well and, after living with them for four years, I can tell you why.  The screws do come loose pretty regularly on doors that are frequently used.  We’ve done so many things to mitigate that (like using rubber washers), but it still happens.  They can also break.  We broke a couple installing them and have broken 2-3 more since when we drop something that hits one of them.  These issues aside, I do love the look and I was able to get them when they were on sale, so I’m still happy with the purchase. 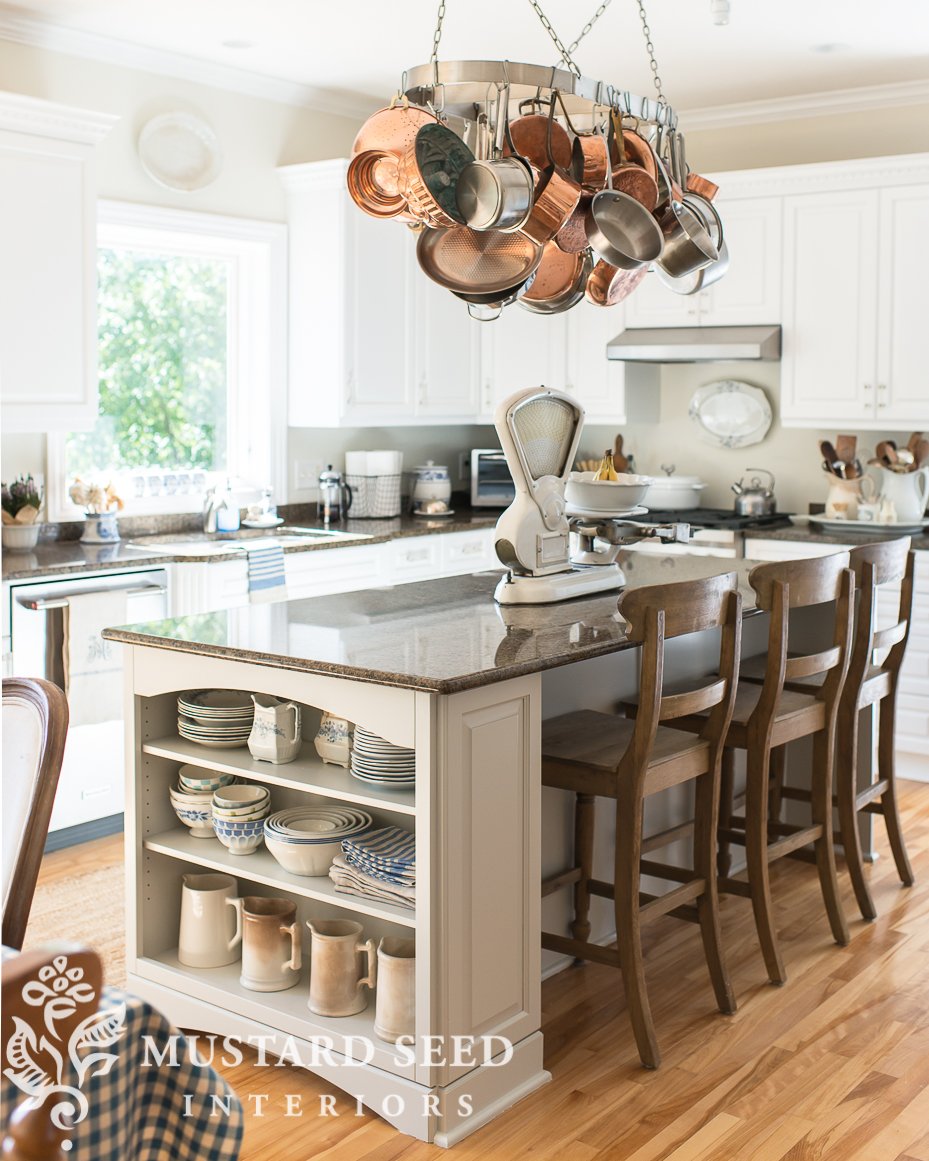 I painted the trim a bright white and the walls Pearly White by Sherwin Williams.  I knew at the time that it was unlikely to be the final color on those walls, but I wanted a fresh coat of paint on the walls in a color I liked.  It ended up looking much warmer in this house than in the dining & living rooms of our previous home, so I eventually changed it.  I think it had a lot to do with the light as well as the yellow tone on the floors.

But, at this stage of the kitchen makeover, I was still sort of feeling things out. 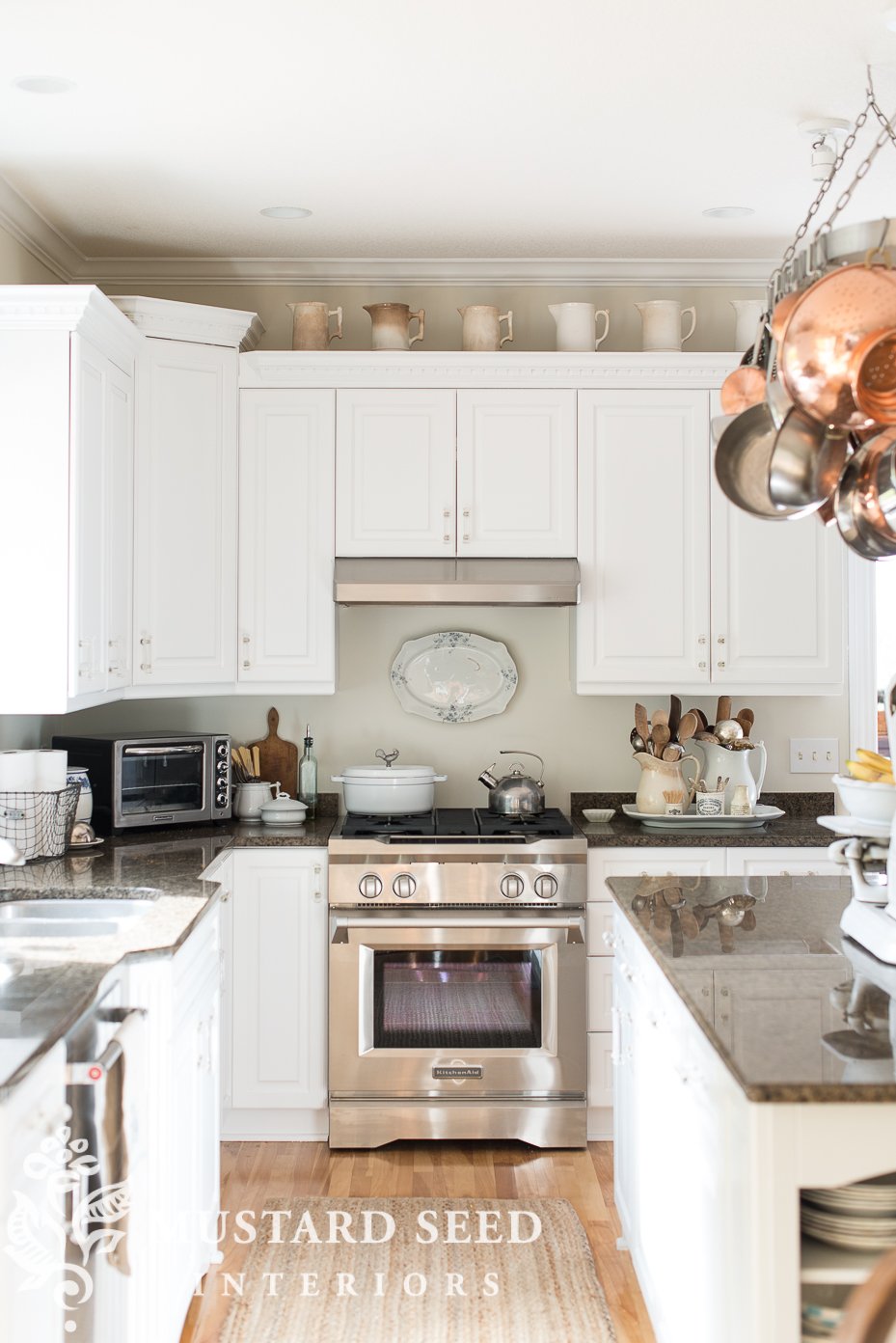 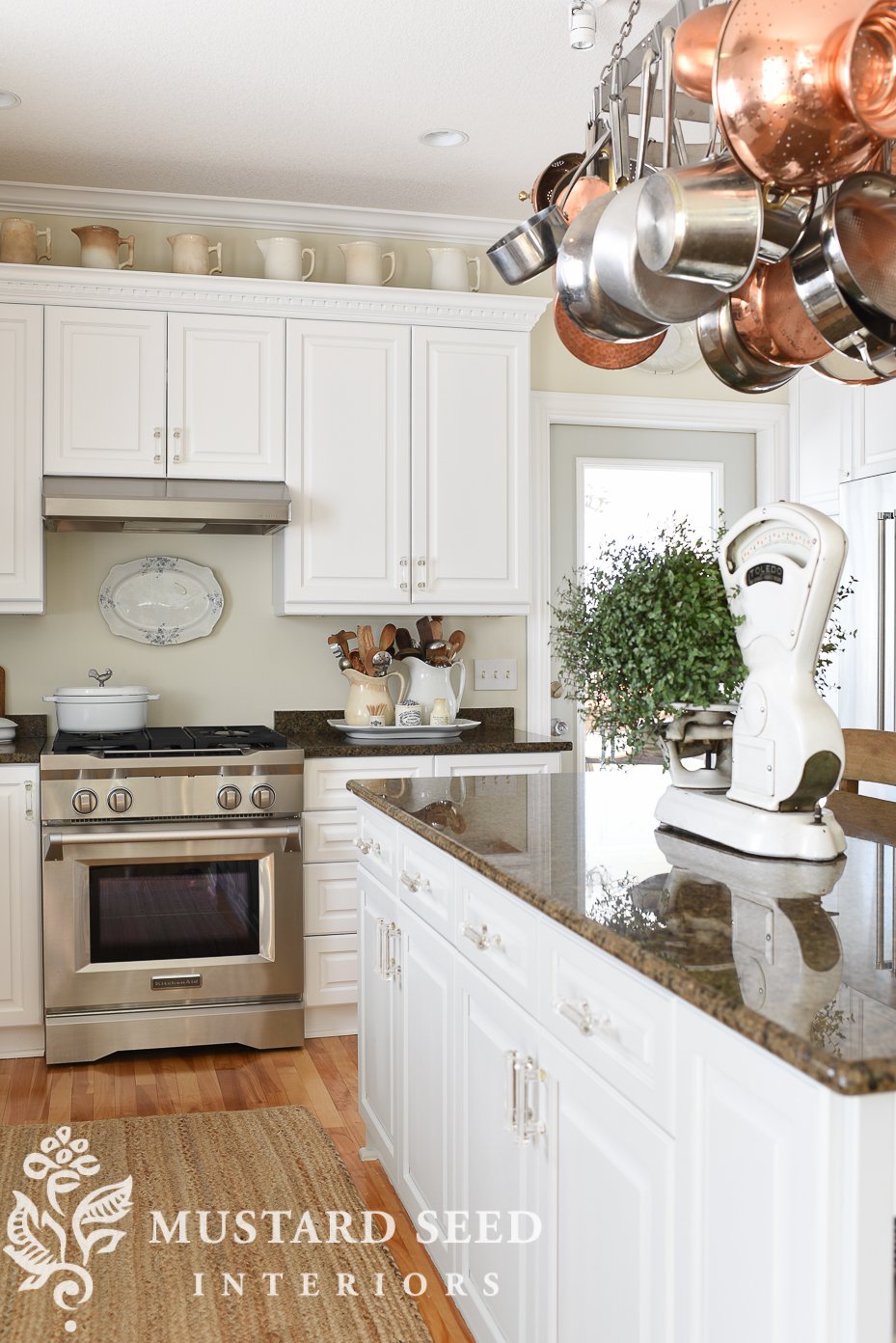 Looking back at these pictures now, I am so impressed with how much the kitchen was transformed with some inexpensive changes.  Other than the appliances, we had only added paint and accessories and changed out the lights and hardware. 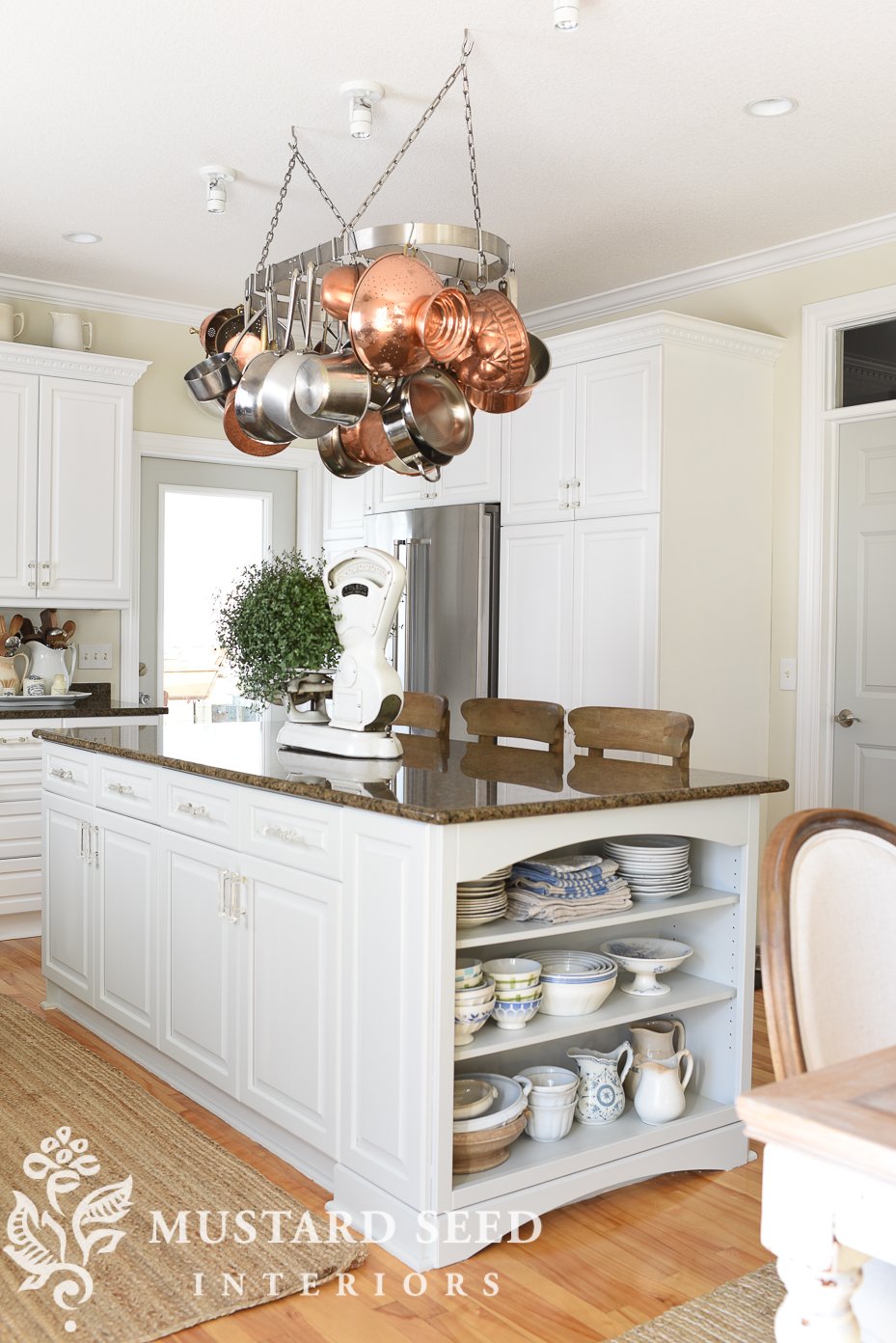 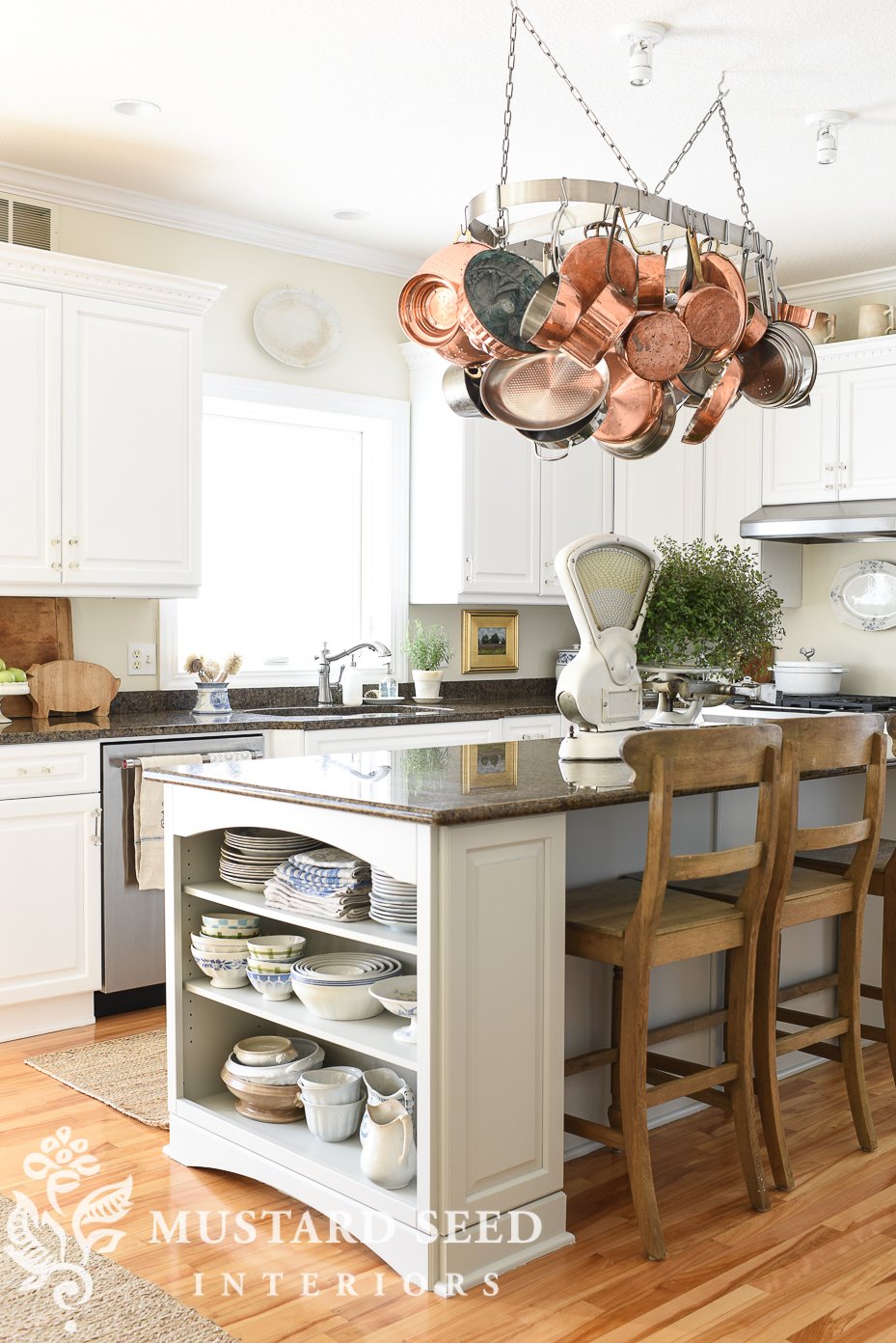 Our kitchen stayed like that for over a year before we decided to move forward with the kitchen makeover and change out the counters.  I had an opportunity to work with Hanstone Quartz as a sponsor and it was the perfect opportunity to lighten the counters and add a backsplash. 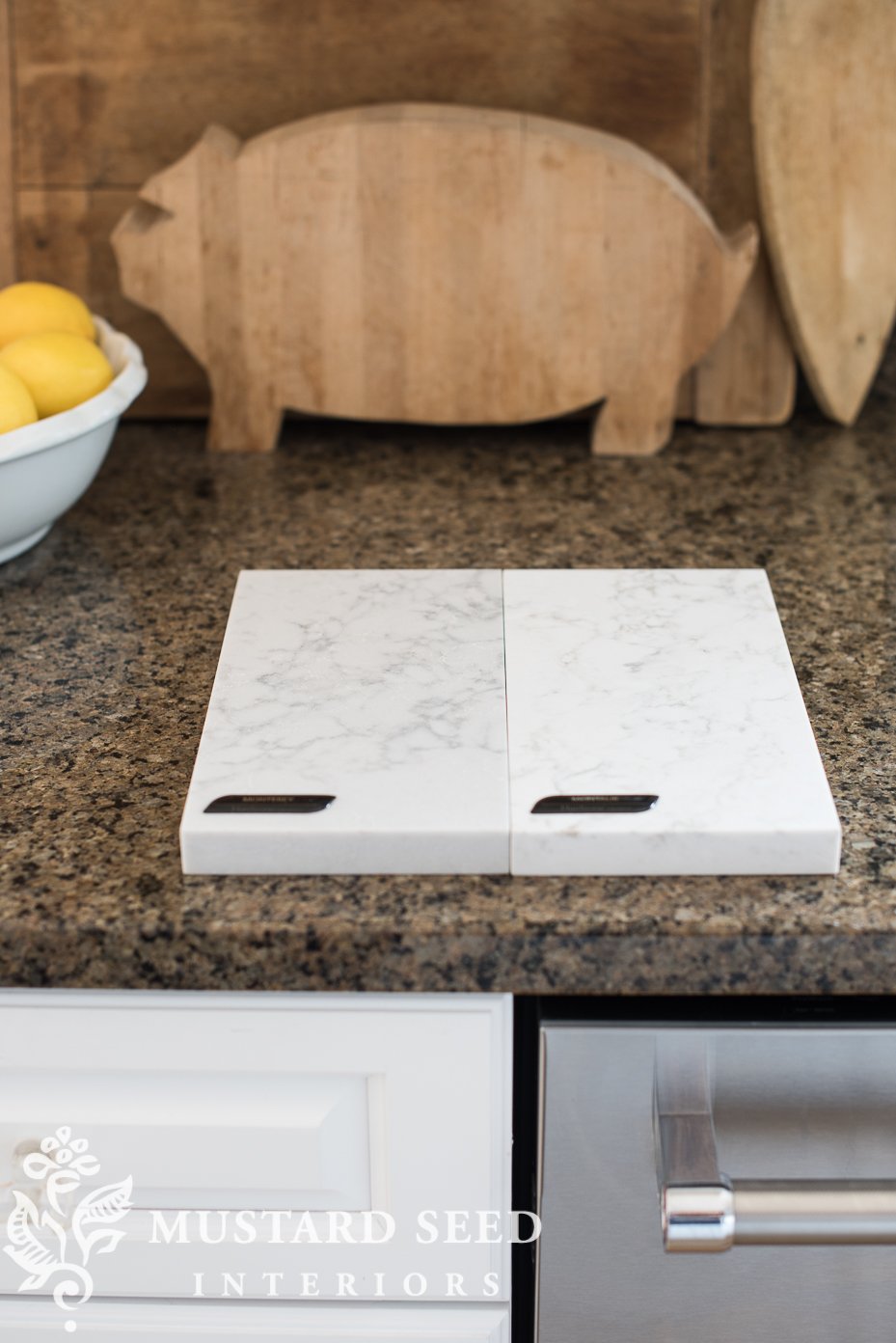 I selected Hanstone Quartz in Monterey.  You can read all about the counters HERE. 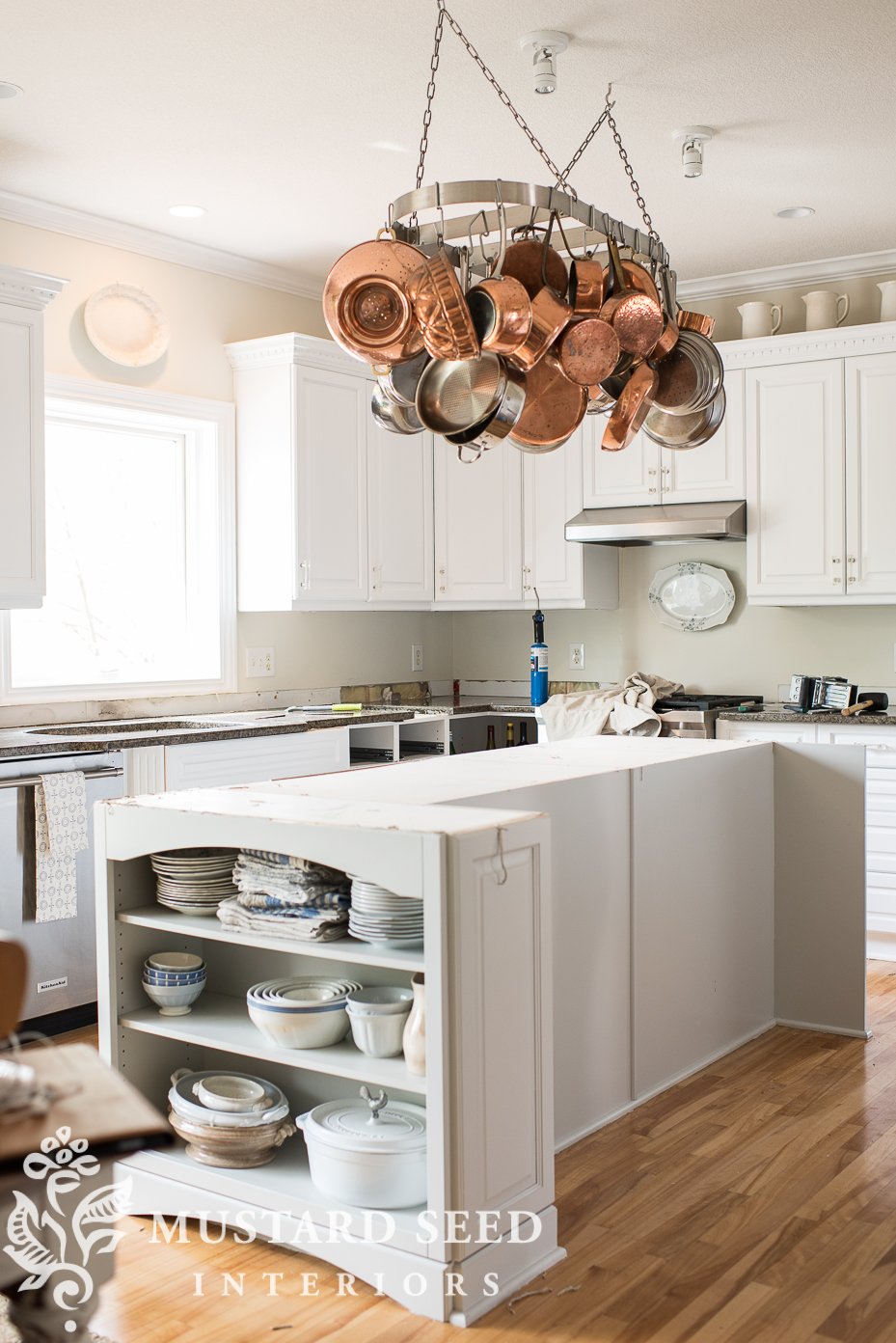 It was a huge difference that made the kitchen feel brighter and even more like my style.  We added a marble backsplash in a classic subway pattern.  You can read about that HERE. 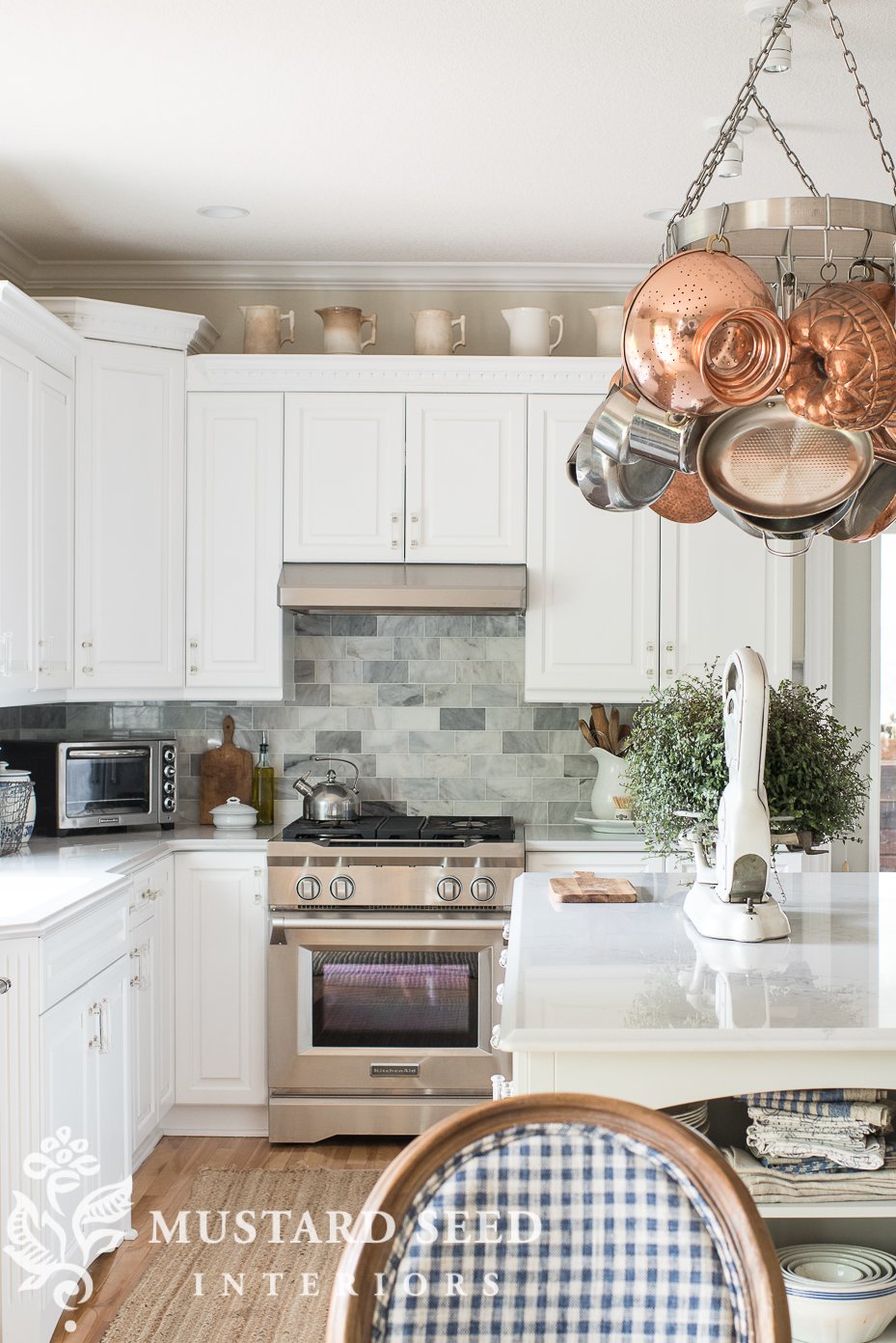 Once the new counters and backsplash were in, it was time to do more painting to tweak the wall color and add a pop on the island to make this kitchen makeover feel complete.  It was all looking a little pale in person. 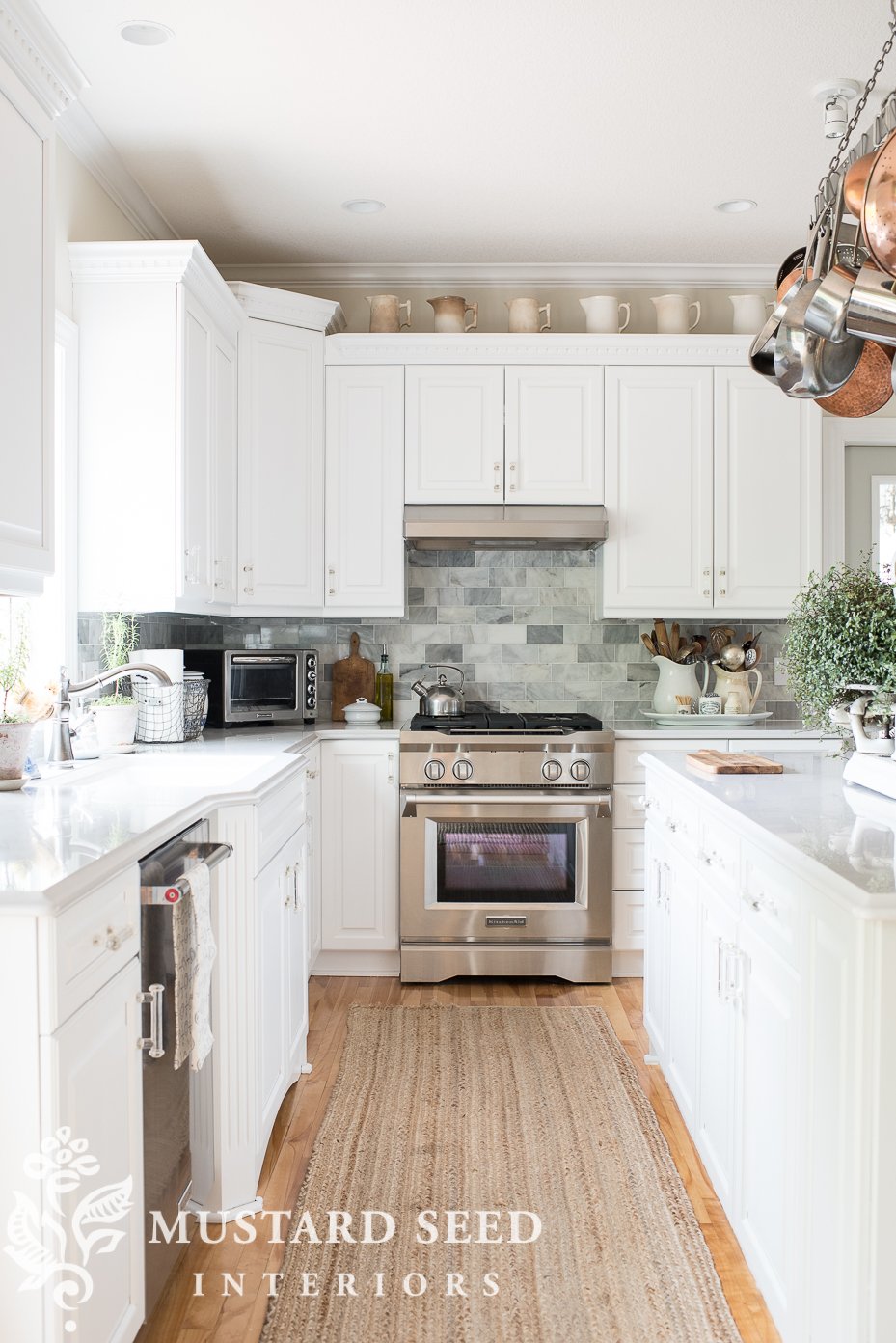 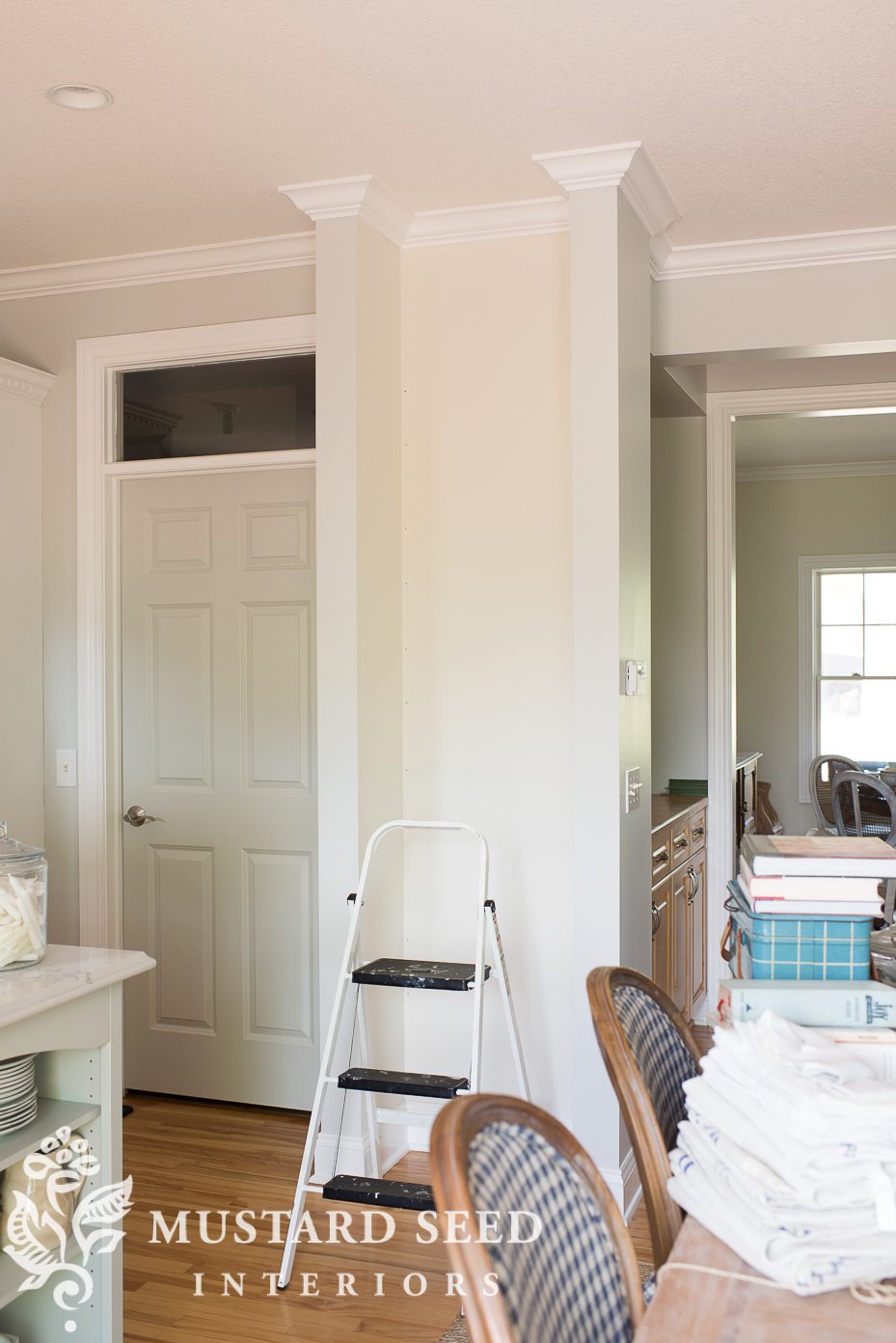 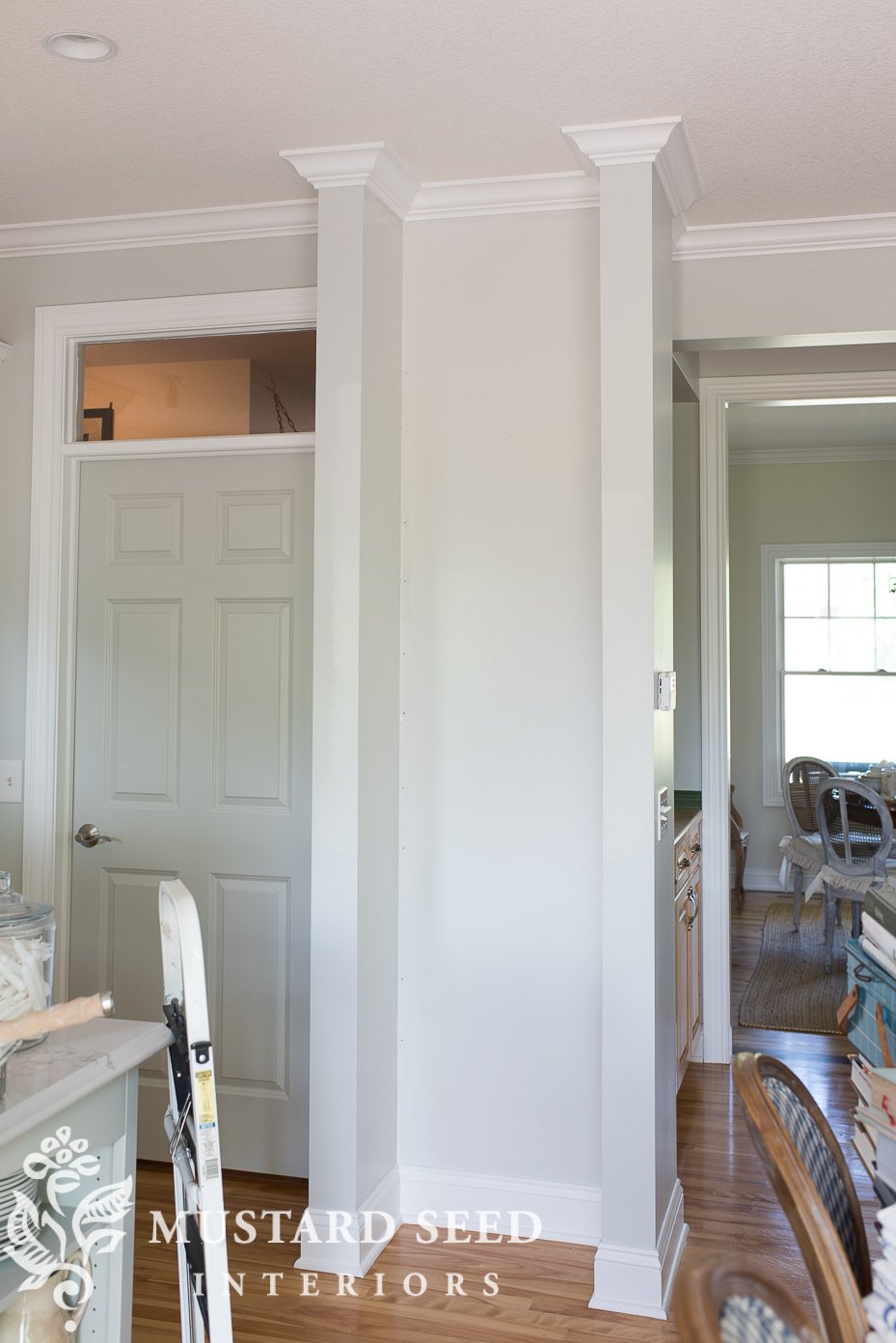 The new color is Stonington Gray mixed at 50% strength.  (You can read about customizing paint colors HERE.)  And I painted the island in a custom green I designed.  You can find the recipe for that color HERE. 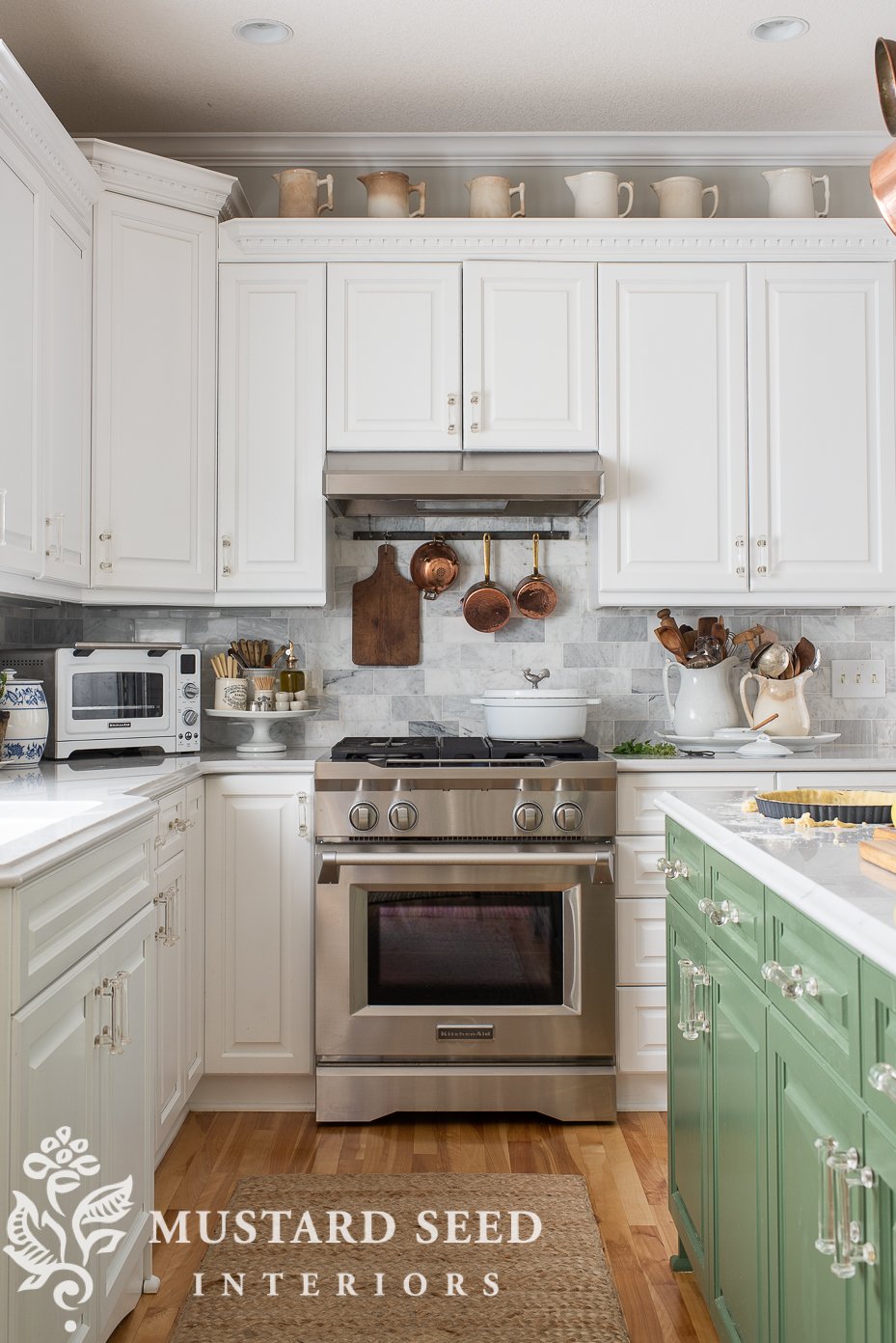 It was gifted to me by Maria of Dreamy Whites and it’s like she knew I had the perfect spot for it!  You can see how I hung it HERE.

I’ve tweaked the accessories now and then, but in large part, our kitchen has remained the same over the past year. 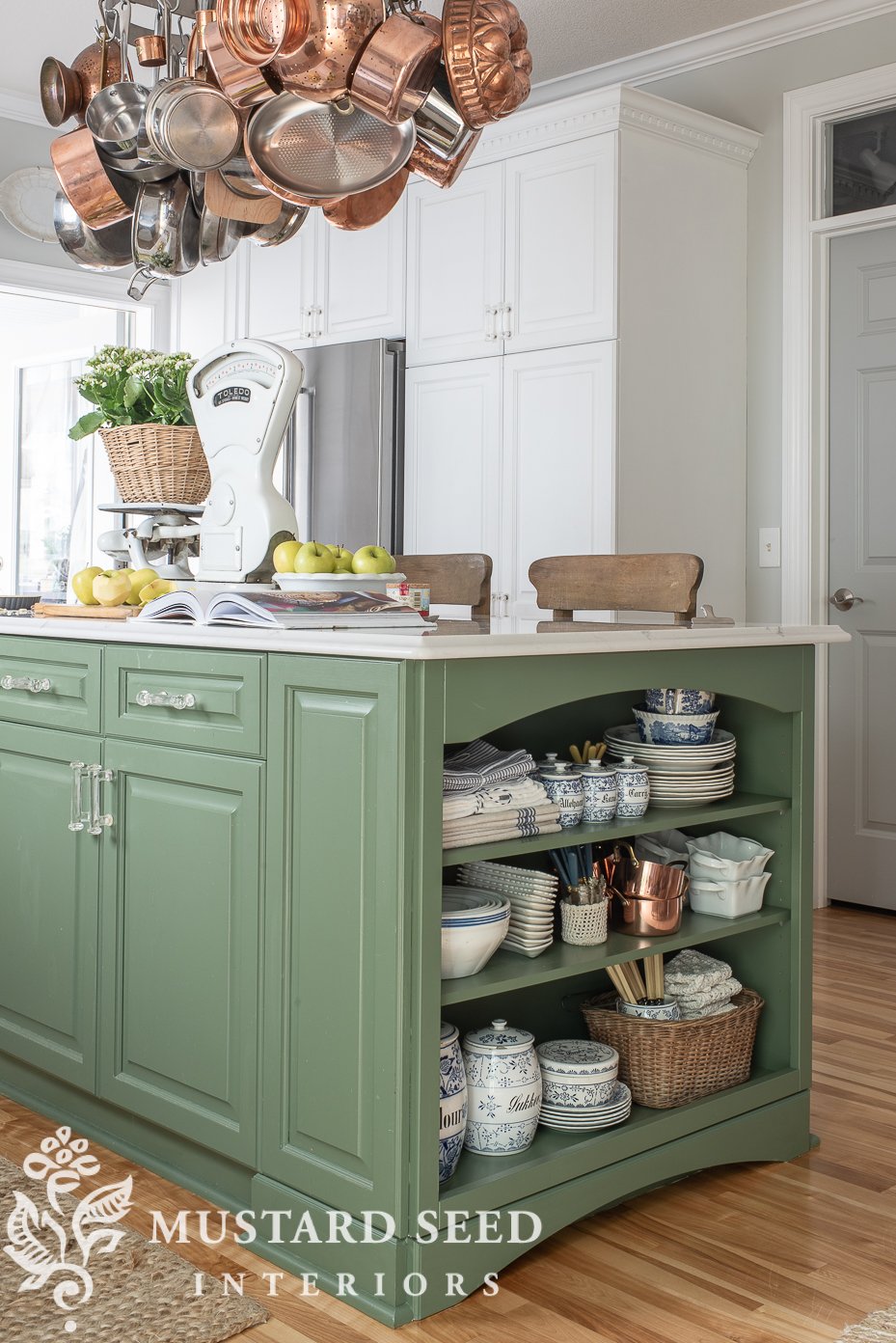 And it’s a great kitchen.   Very functional, lots of storage, and now it’s not only a great kitchen, but my kitchen.  And that’s what working on your home is all about.  It’s not about trends and what other people like, but what you like. 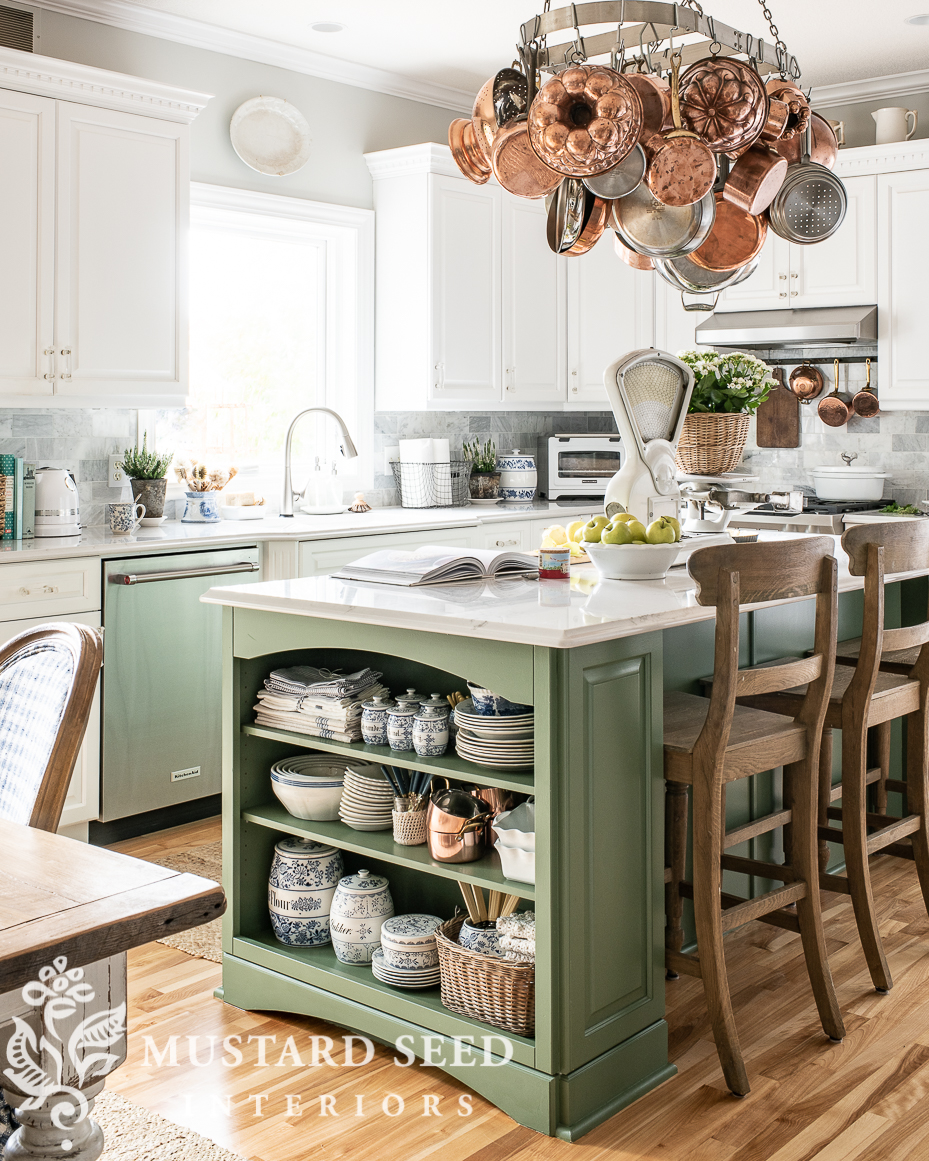 I hope you enjoyed this little tour through the evolution of our kitchen makeover and took away a few ideas to use in your own. 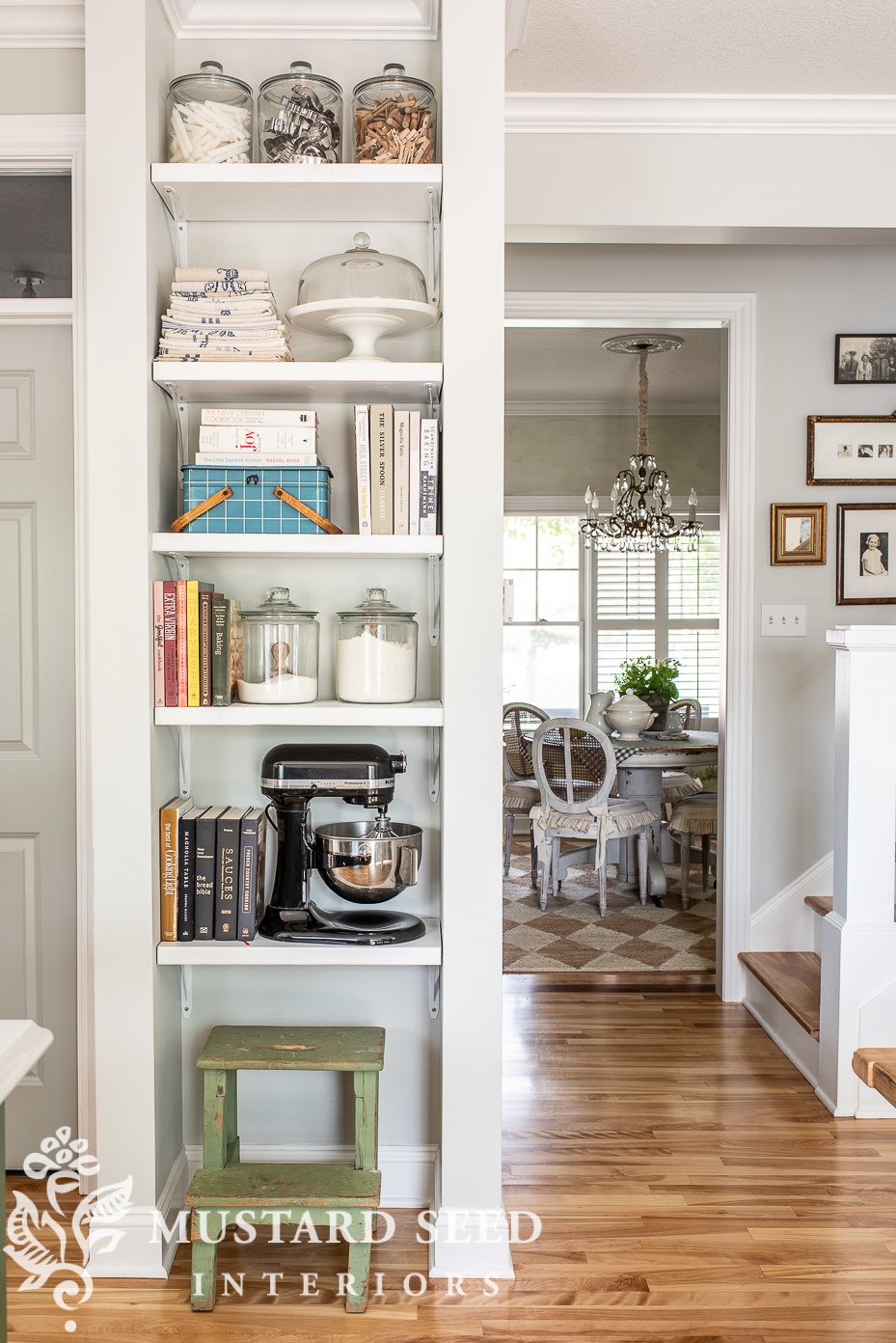