In my post about the pot rack, you could see the new open shelving in the background… 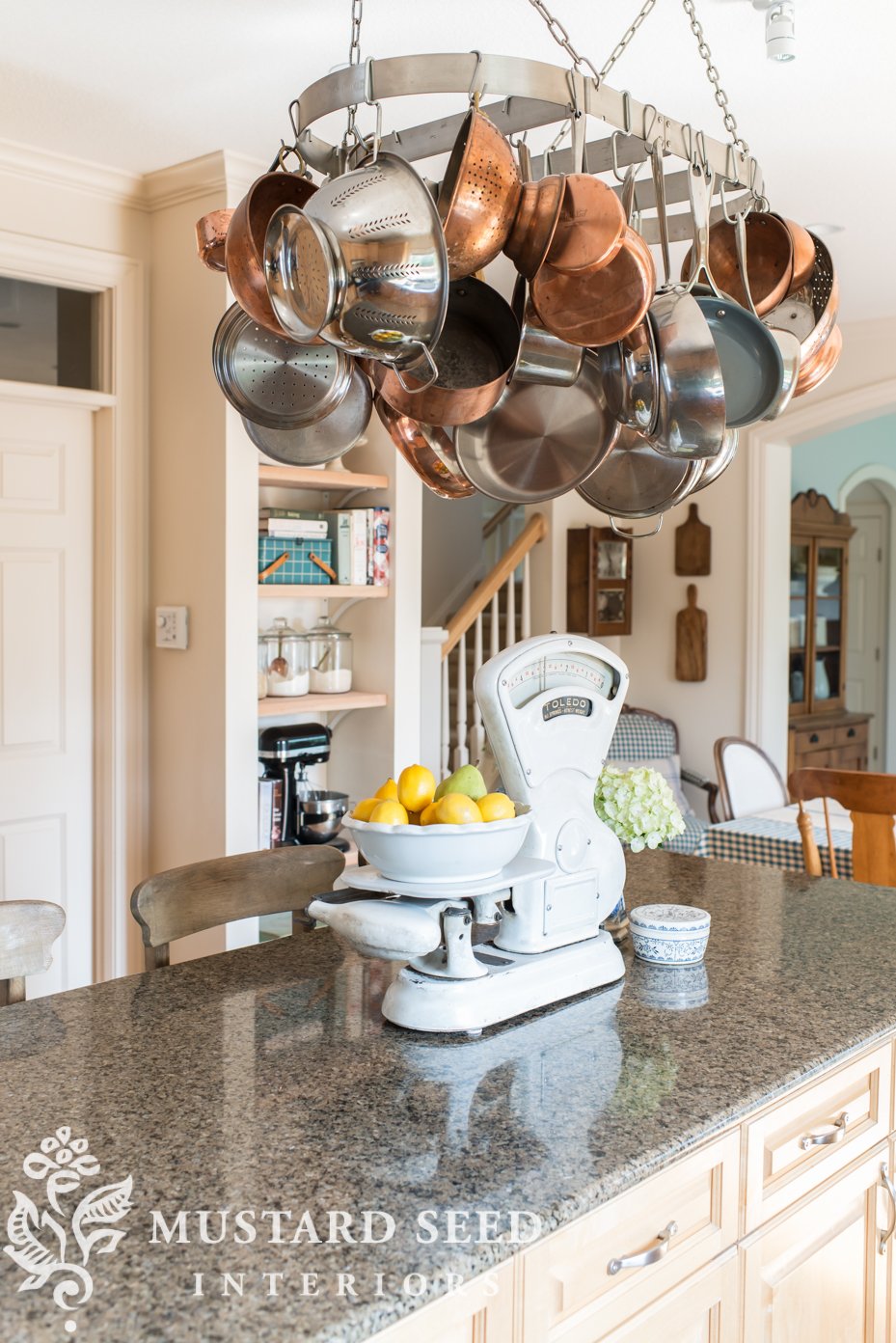 When I first spotted this somewhat awkward alcove, I immediately thought it was begging for some shelves. 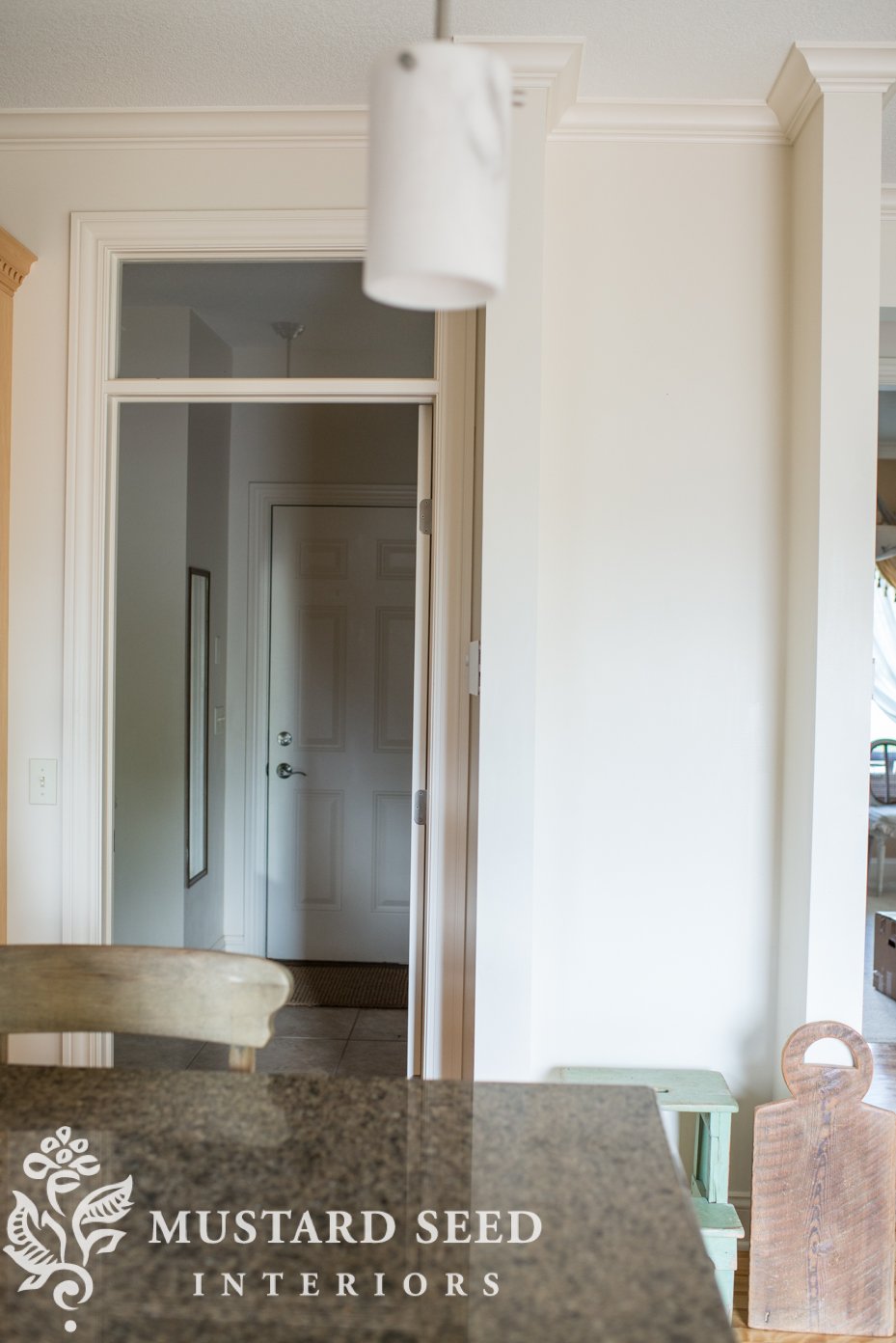 And I realized once we were unpacking that I was really missing some open shelving in this kitchen!

It was one of the projects on my list to complete during the two days my brother came to visit.  Late one night, we talked about possible ways to install the shelves…floating, bracketed, built-in, etc.  We also checked out the space in more detail to see what ideas would actually be possible.  It turns out that there are only studs at the back corners of the cubby, so any shelving had to be mounted there, not the back center or the sides.  There just wasn’t anything to screw into, but drywall.

After over-complicating things, we balled up the plans and just decided to do 2″ x 12″ shelves with simple metal brackets.  I felt like the brackets would visually disappear once the shelves were painted and styled.

It’s a good thing we took the simple route, because these are some wonky walls!  Nothing is plumb or square, so each shelf had to be custom-cut to fit the exact space. 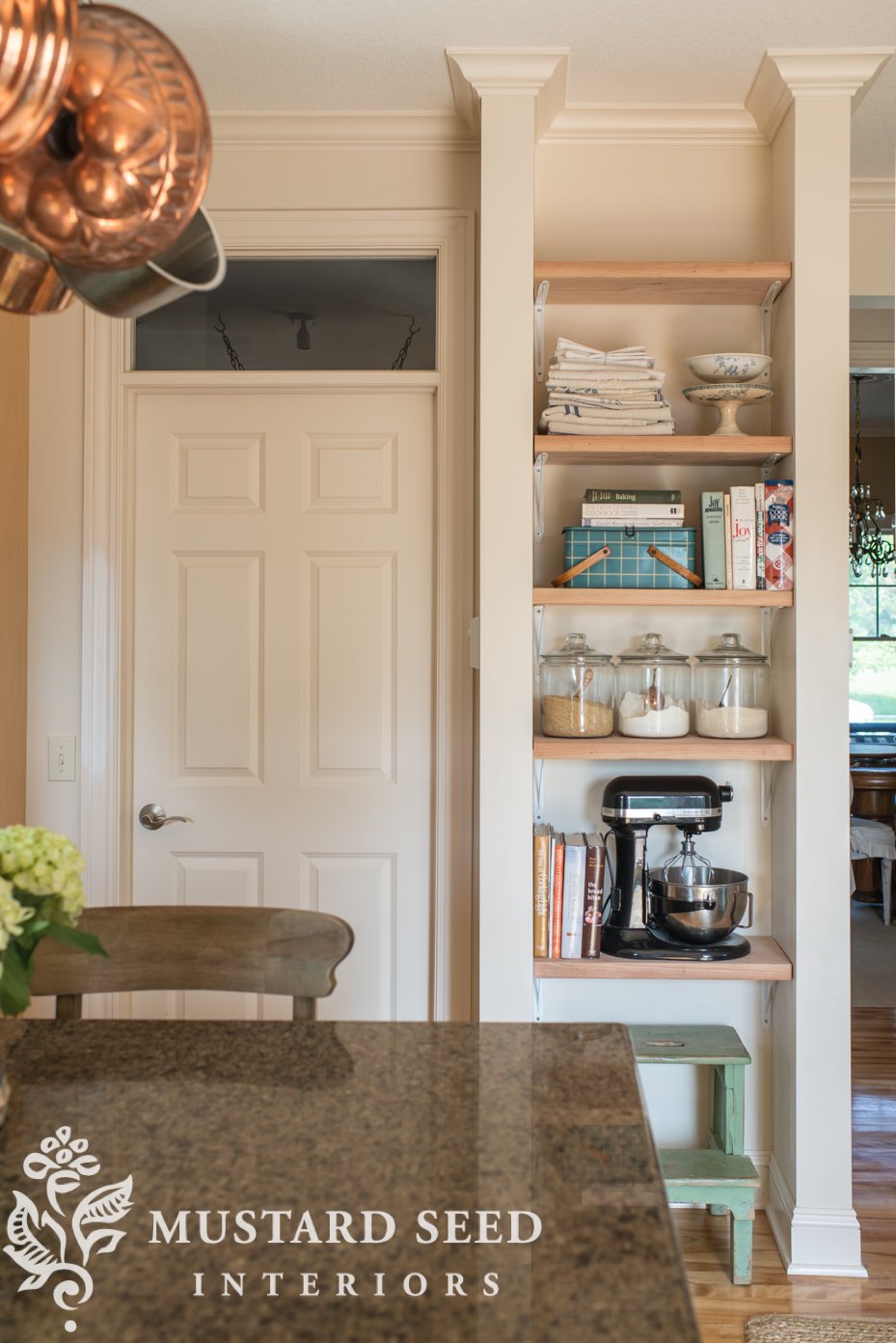 Of course, they still need to be painted and I need to put something on the top shelf, but I love how they transformed that little nook, making it functional and visually more interesting. 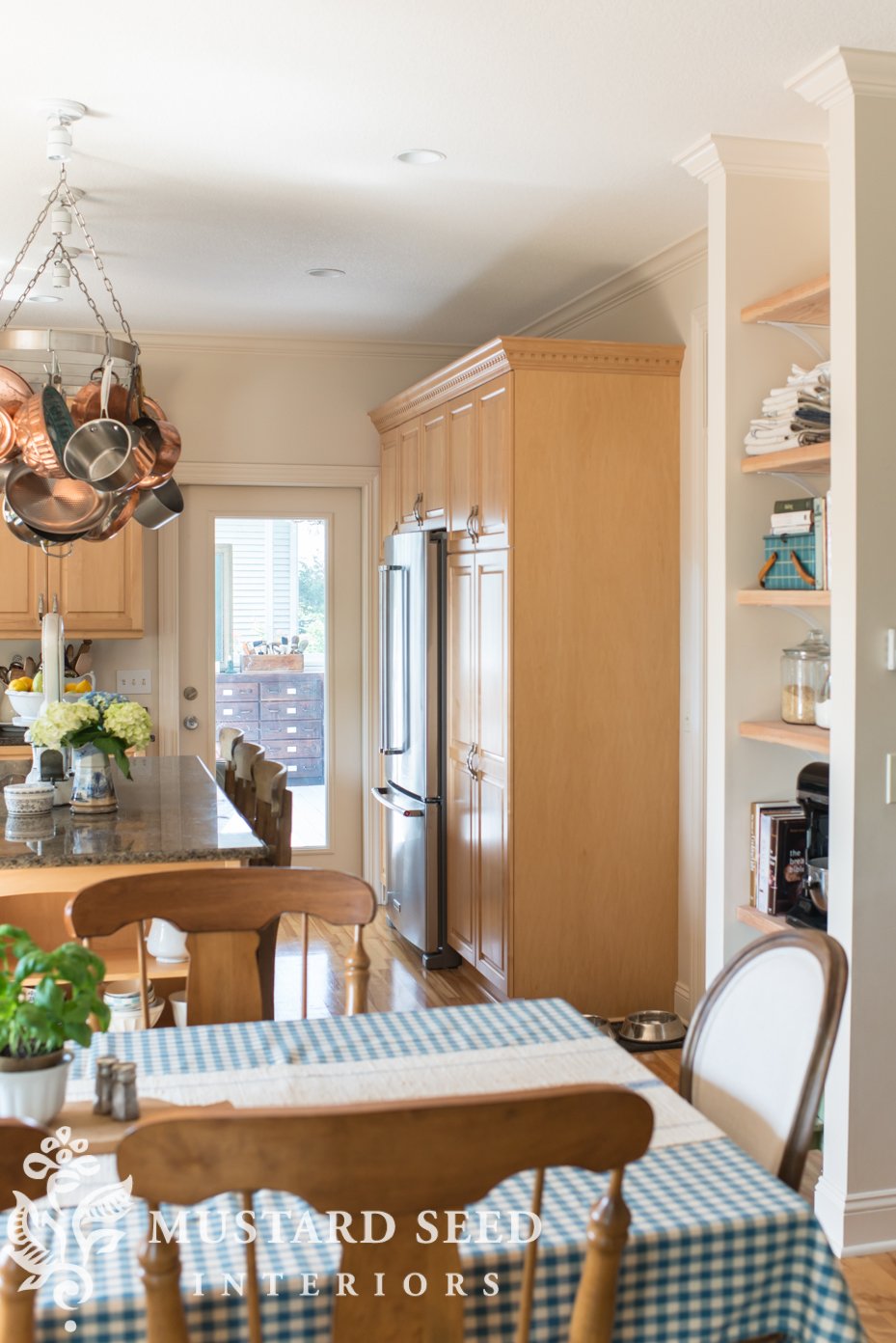 Now, it probably would’ve been smarter to paint everything and then install shelves, but when you have a house full of family there to complete projects, you just put the cart before the horse and sort it out later.

I cannot wait to paint this kitchen!  Right now, the walls and the trim are a pale beige/off white that almost has a pinkish cast.  I’m really missing the contrast a bright white trim offers, too.  I’m going to paint the walls in Pearly White by Sherwin Williams (mixed in Aura by Benjamin Moore) and the trim will be All White by Farrow & Ball.  You can see a swatch I painted on the left side of the laundry room door frame.

Well, you can sort of see it!  The wall color is the same value, but just a cooler white.  The trim is more noticeable.  It’s one of those changes that looks subtle as you’re painting it on, but then you realize the whole effect makes the room look entirely different.

I plan to start painting the cabinets and more of the walls and trim this week.  It will be exciting!!

While we’re talking about the kitchen, I wanted to share where we put the microwave! 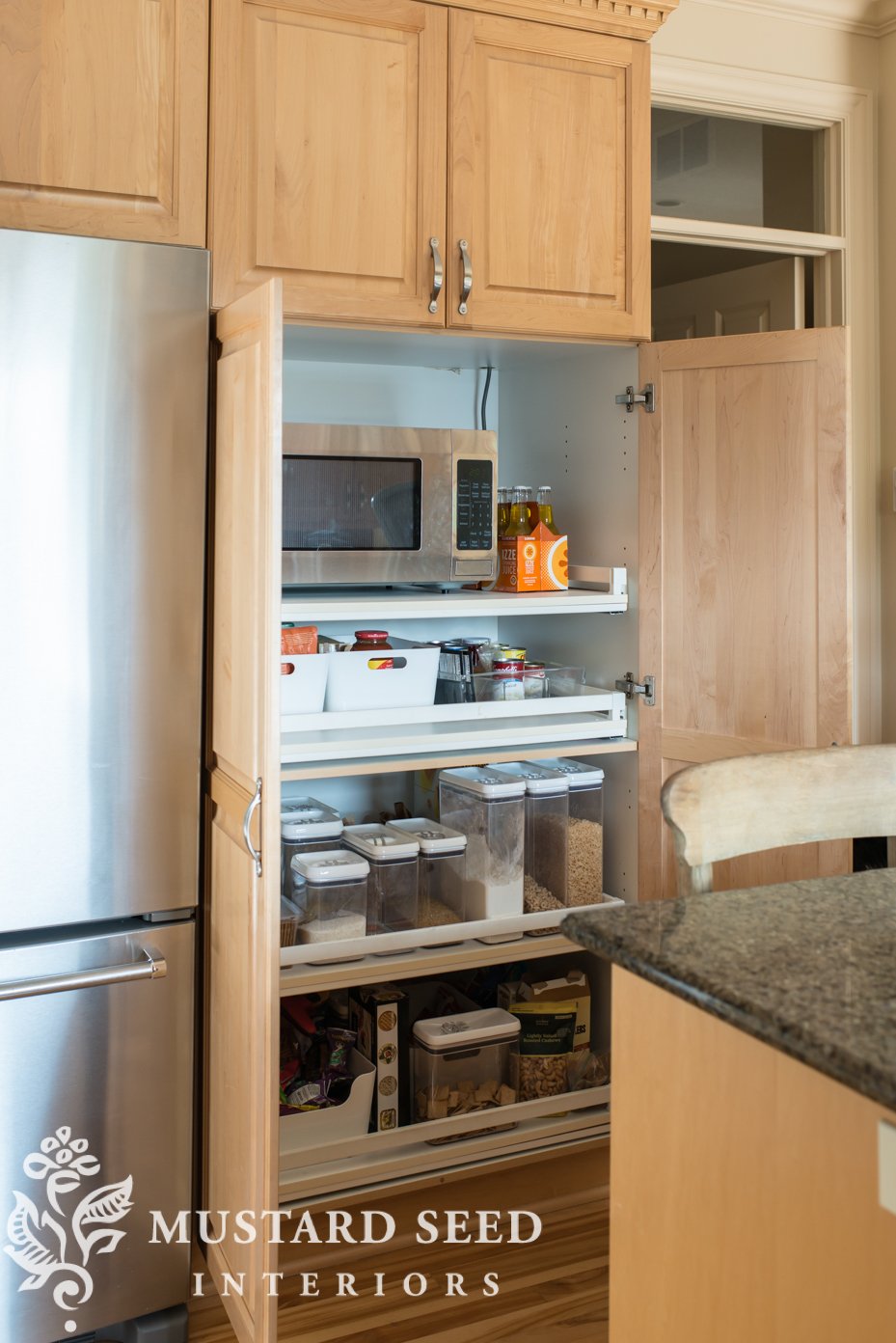 Yep, it’s in the pantry.  Yes, we have to keep the doors open while we’re using the microwave, but it’s a tradeoff I’m willing to make to keep the microwave off the counter.  Maybe somewhere down the road we can build it in somewhere, but this is a great solution until that day (which may never come).

First, we made sure the shelf could support the weight of the microwave.  These are heavy-duty slides, so that wasn’t a problem.  (In our last house, the slides were not very sturdy and they kept falling if we put on too many can goods!  We installed new slides that would hold more weight.  Fortunately, these are already upgraded.)  Jeff did make one modification, though, and he cut off the front of the shelf, so we could open the microwave door.

Now, we had to figure out how to get power to the microwave.  We actually had outlets on top of the cabinets for lights, so we drilled a couple of holes through the upper cabinets and ran a cord to that outlet.

I’ll admit, it is a bit of a pain to have the doors open while microwaving something, but this isn’t the 1980’s when I’m using my Microwave Cookbook to cook a roast for 45 minutes.  We just use it for a few minutes here and there to thaw a bagel, steam some veggies, or heat up leftovers.  We can deal.

Oh, I was going to say to check out my Instagram stories for updates, but many of you mentioned that you didn’t know how to do that.  I did a bit of research and there is a way you can watch them from your computer.  I found an extension you can add if you use Google Chrome as your browser.  Just click HERE to go to the Chrome Store to install it.  I did it on my computer and it’s much better than viewing on the phone.  You can also search for specific people’s Stories, which is a nice feature.  It looks like this… 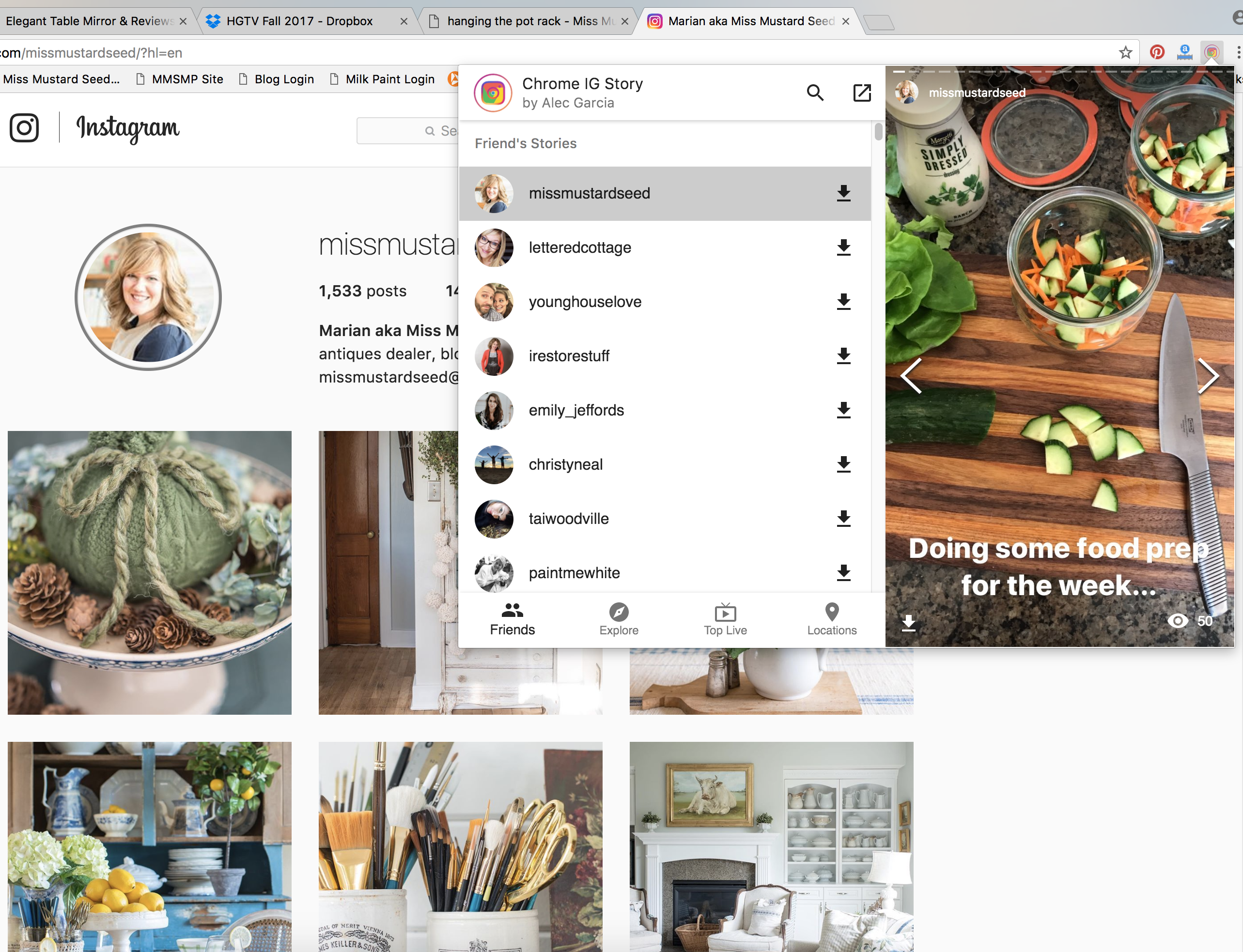 I share a lot more of this-and-that kind of things on the Stories and also what I’m up to for the day, if you’re interested!