I must confess that as I looked at this big, empty house, I felt a little intimidated by it.  When we bought our PA home, there was a lot of obvious work that needed to be done.  This house, though?  It’s beautiful.  Would my chippy, crusty antiques look like junk?  Would my ironstone look completely out of place?

The moment of truth came Saturday morning when an army of people from our church showed up to help unload our truck.  Before we talk about the kitchen and how my stuff looks in the house, I have to give public kudos to all of the people who showered love on us on moving day.  The 28′ truck, that was packed floor to ceiling, was completely empty in 45 minutes.  And once the truck was empty, many people stayed to help with everything from putting together beds to removing shrink-wrap from furniture, assembling shelves, and unpacking boxes.  A team of guys even hooked up my washer and dryer, down to making sure the doors opened in the most convenient direction.

It was an awesome display of service that I will never forget.

Once everyone left, I walked around and took in each room.  I could feel the ideas and excitement bubbling up.  I could see it.  It might take some figuring out to get it all just right, but my style is going to work in this house.  I think I knew in my gut that it would, from the moment I looked at the pictures in the listing, but I was second-guessing myself!

Most of the help I’ve had over the past week has been focused on the kitchen.  Since that room is the furthest along, I thought we would start the tour of my new house there.

Now, my last kitchen was pretty great.  It was probably the best part of the house and it was going to be tough to beat.  I don’t know if this one beats it yet, but I’m optimistic that it might!

It’s a U-shaped kitchen with a large island.  Nice maple cabinets, granite counters, and maple floors provide the bones of the space. 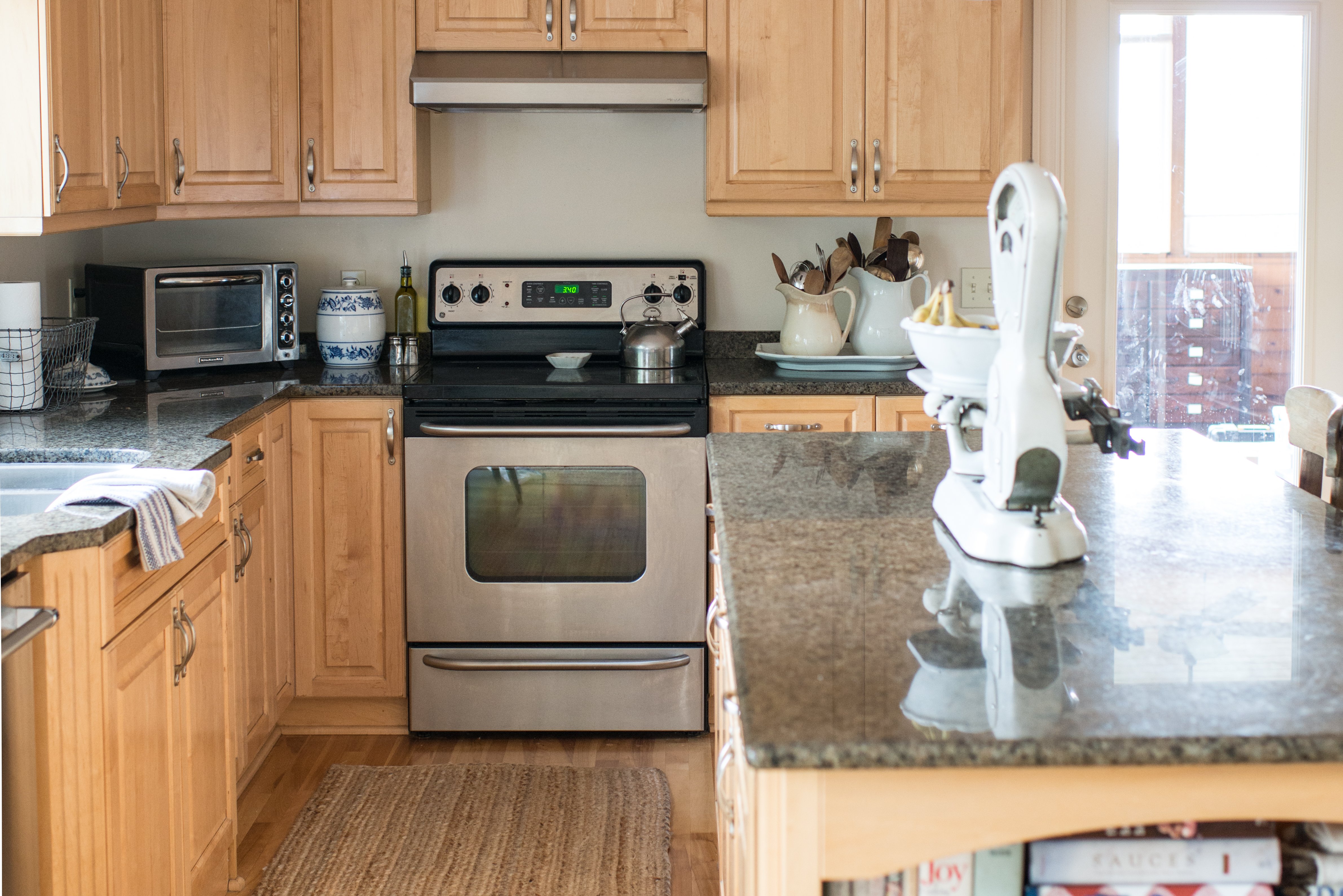 When I first looked at pictures of this house, I noticed right away that one thing couldn’t be checked off my “must” list for a house…a gas stove.  I know for some people, the kind of stove wouldn’t matter, but I like to cook and it’s a big deal for me.  My fellow gas-range-lovers will agree.  Can I get a witness?

Here’s the thing.  I am not good at cooking on electric. 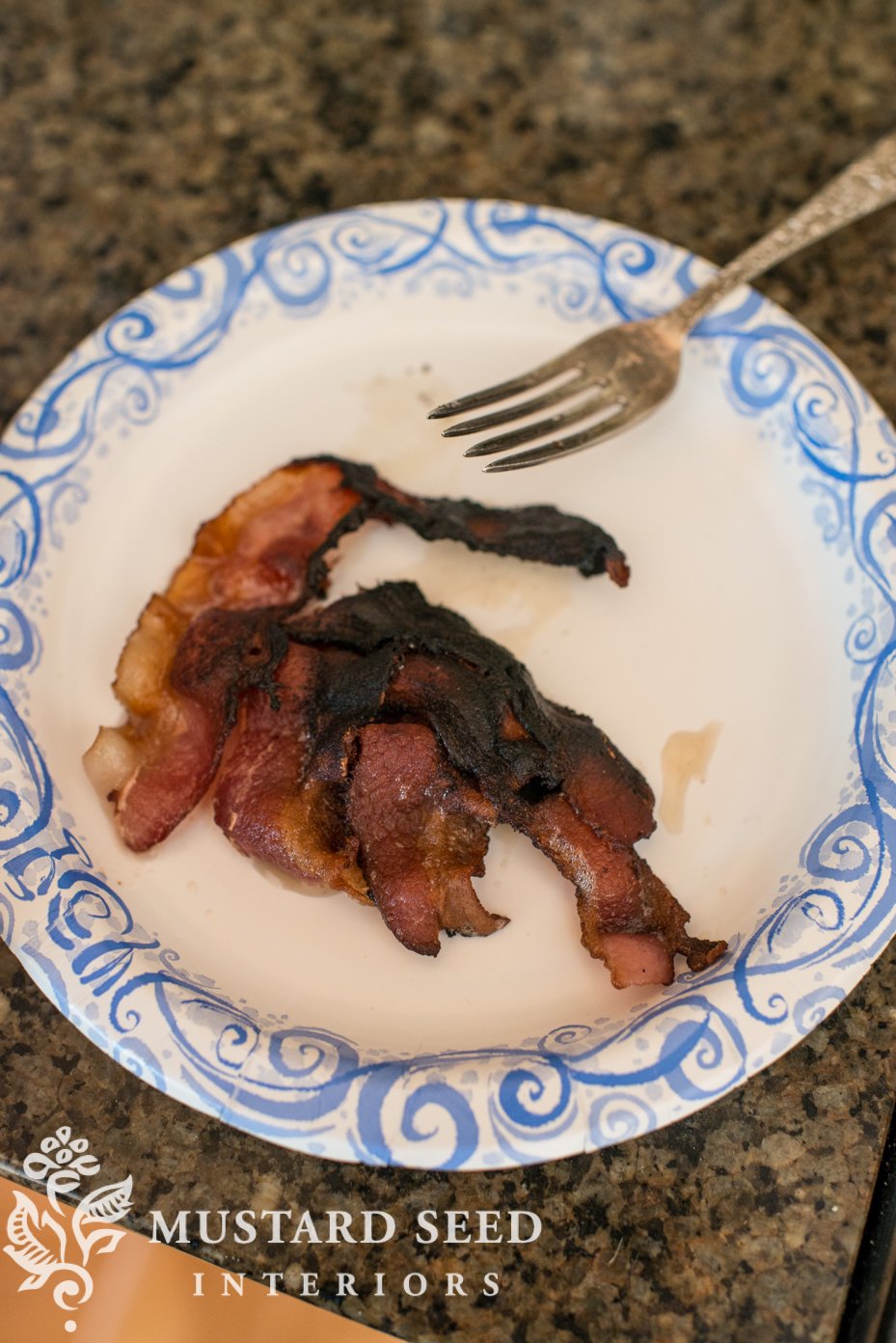 Beyond all rational explanation, the bacon is simultaneously burnt and raw.

I showed the evidence to Jeff this morning and he pointed out that I was probably not paying attention.  Okay, I wasn’t fully attending to the bacon, which isn’t completely uncommon for me, but if that was the only factor, it would’ve been just burnt.  This was uneven cooking at its finest.  It was the stove.  Not my multi-tasking.

But it doesn’t matter, because we made a pact when we decided to pursue this house – we would run a gas line and buy a gas range.  I’ll keep you posted on when and how that will happen.

The other changes I want to make are cosmetic.  As I’ve thought through the projects, I’ve decided to go with a splurge and save plan.  There are a couple of things I want to splurge on, like a beefy gas range and marble counters, and some things I want to save on, like painting the cabinets and installing a tile backsplash myself.  I’ll also forego the popular apron-front sink in favor of a less expensive white drop-in or under-mount sink (that won’t involve modifying the existing cabinet or purchasing a new one). 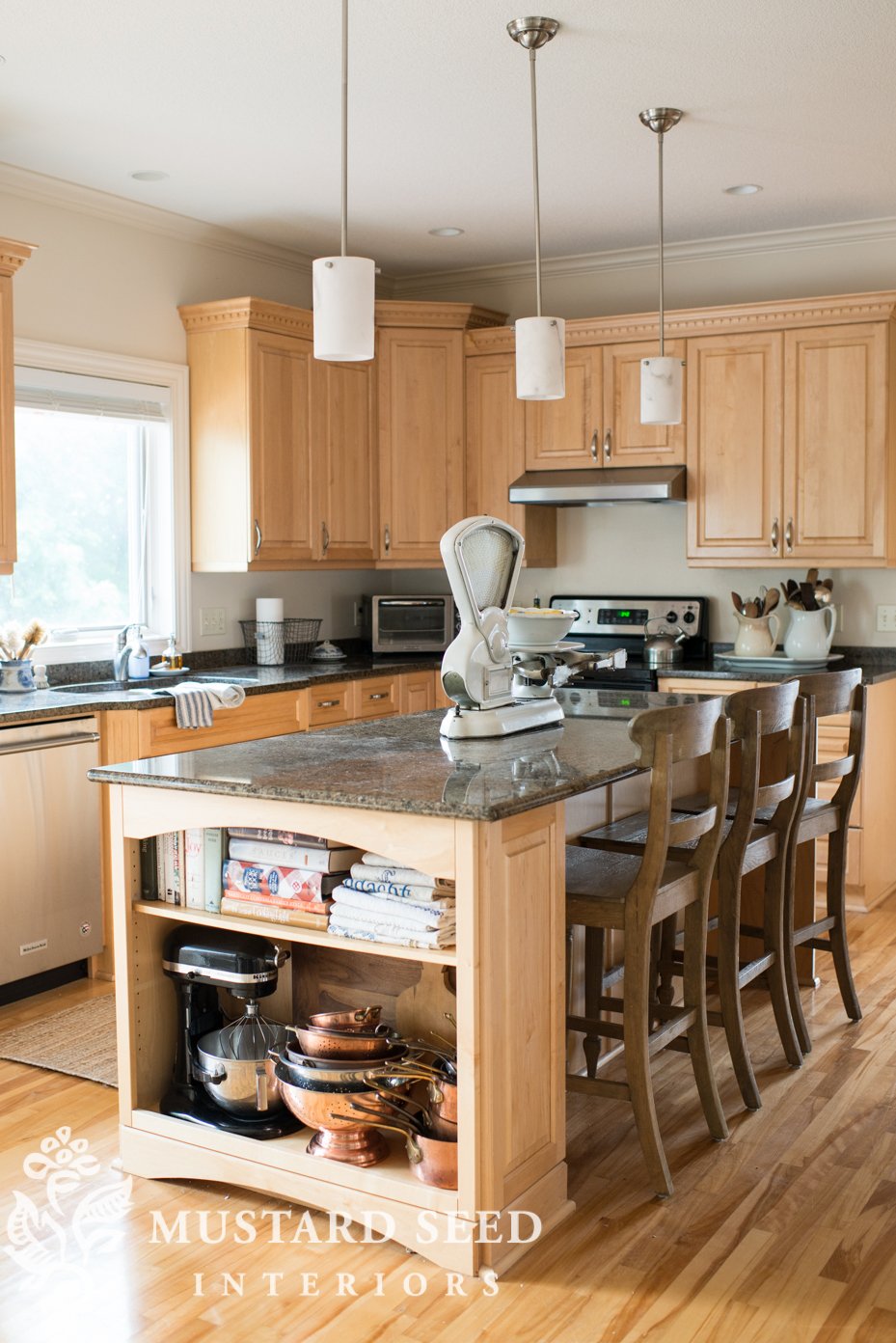 We’re also going to switch out the modern pendants for recessed lights, so I can hang my pot rack over the island.  I wasn’t sure if I was going to hang the pot rack, but I love the texture and warmth it brings to a kitchen.  It might not work, but we’re going to give it a try.  I do have a plan B if it doesn’t. 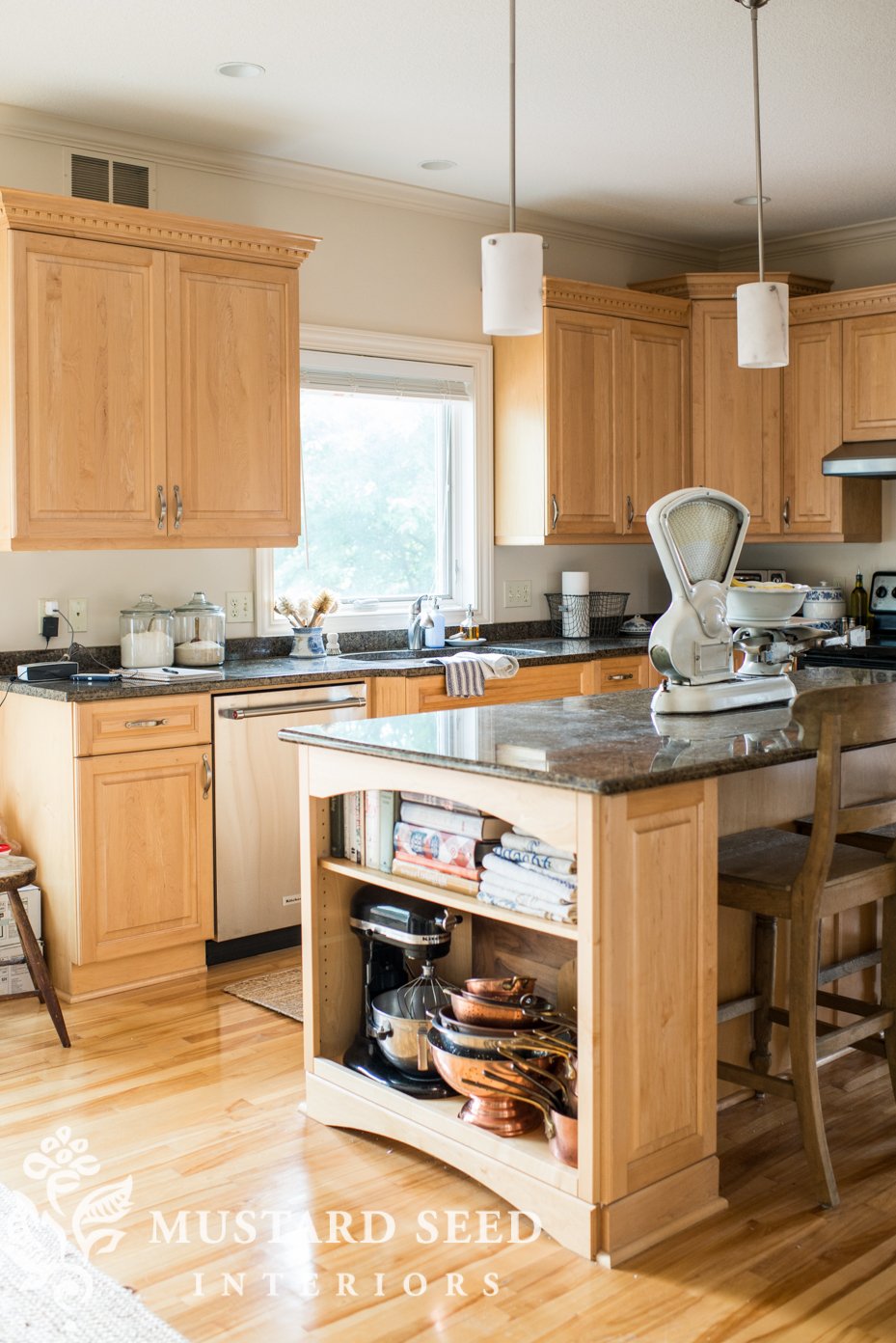 In addition to the good bones and great light, I love how this kitchen looks great from many different angles!  It’s a very photogenic space! 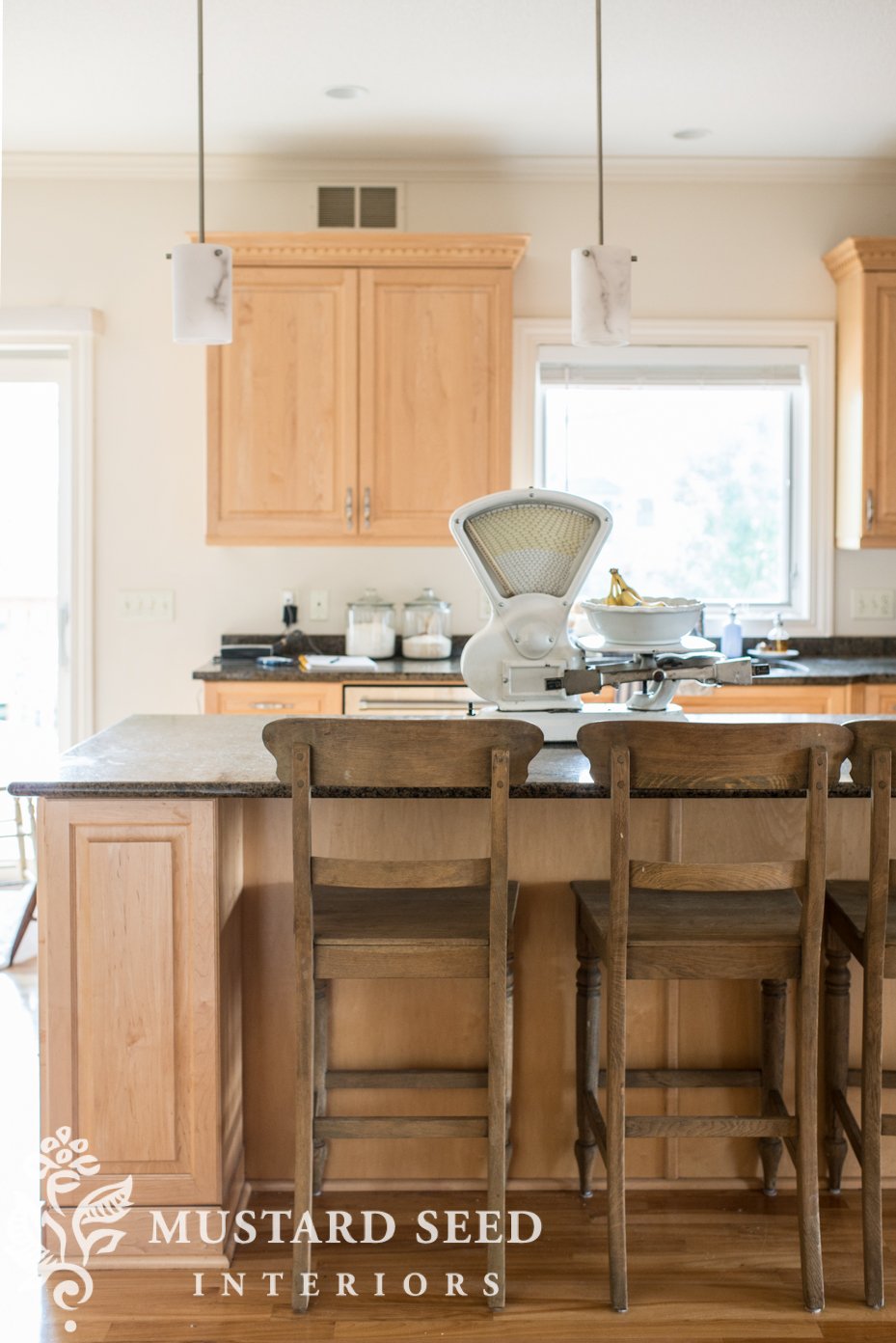 There is a little alcove between the laundry room and hall to the dining room and I think it’s a great place for some open shelving.  I can just picture stacks of ironstone… 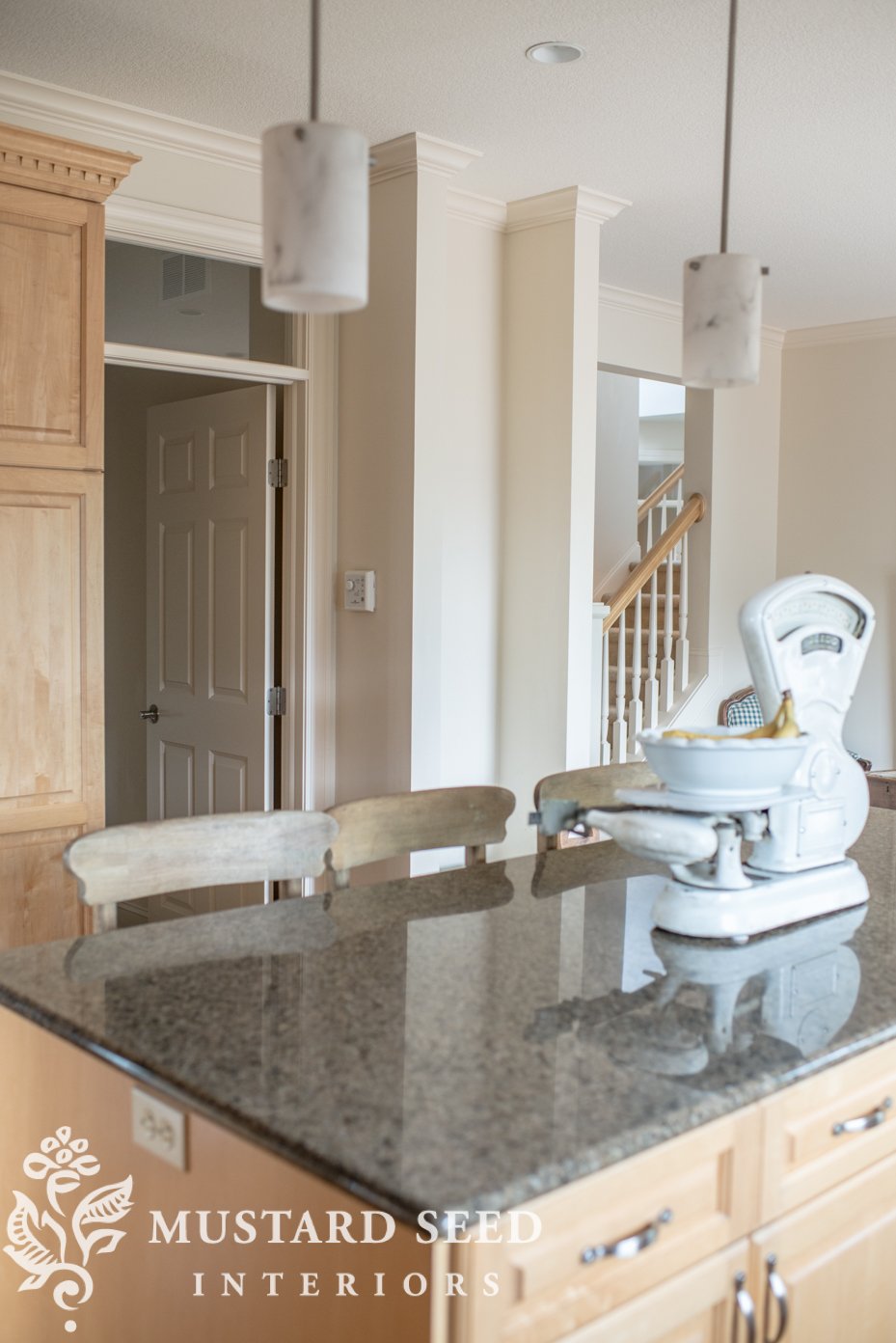 And our “double stool” fits in the recess perfectly, so we’ll keep a place for it under the shelves. 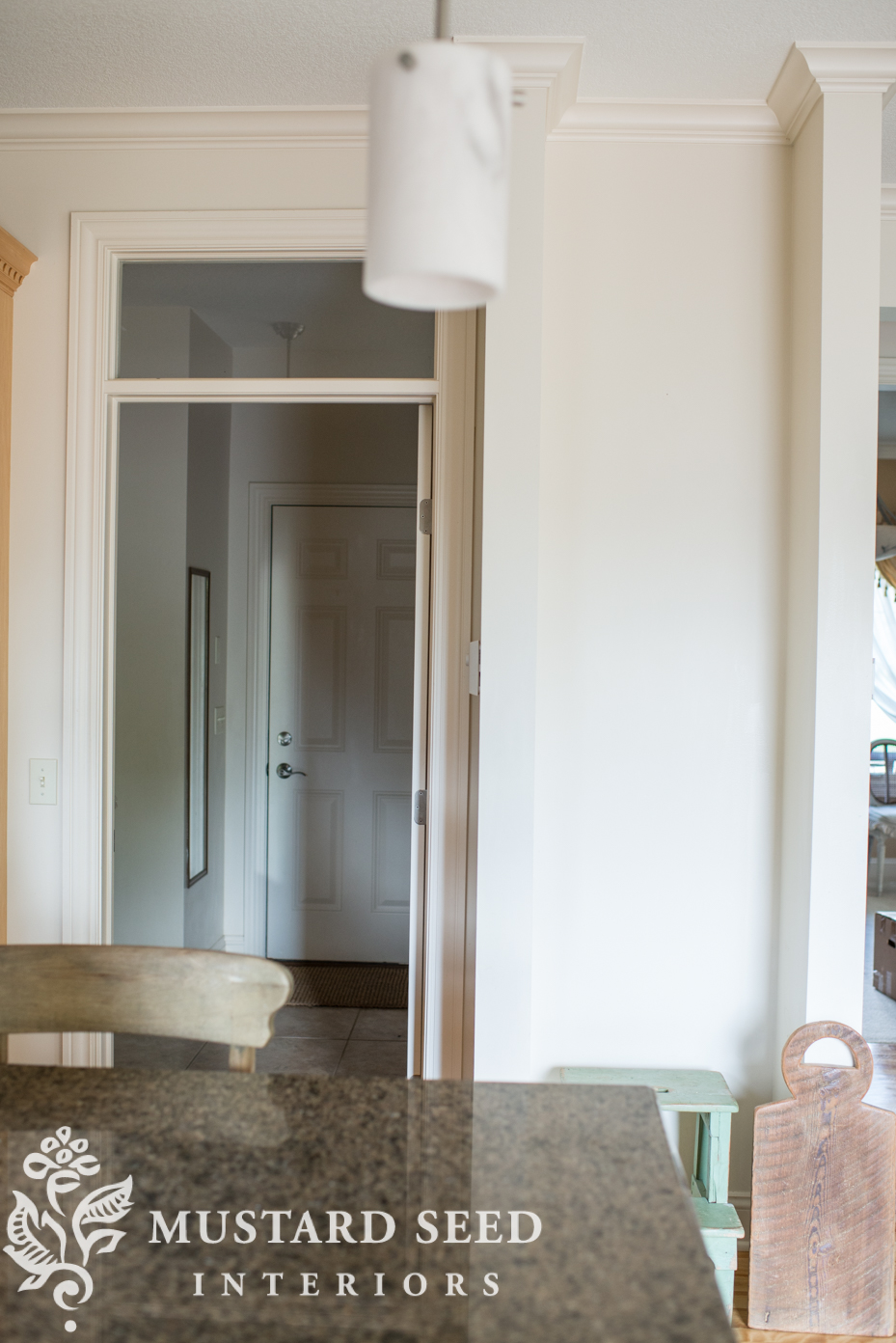 There isn’t enough space under the cabinets for my Kitchen Aid mixer, so I put it in the shelves at the end of the island.  It’s out of the way, but visible and accessible. 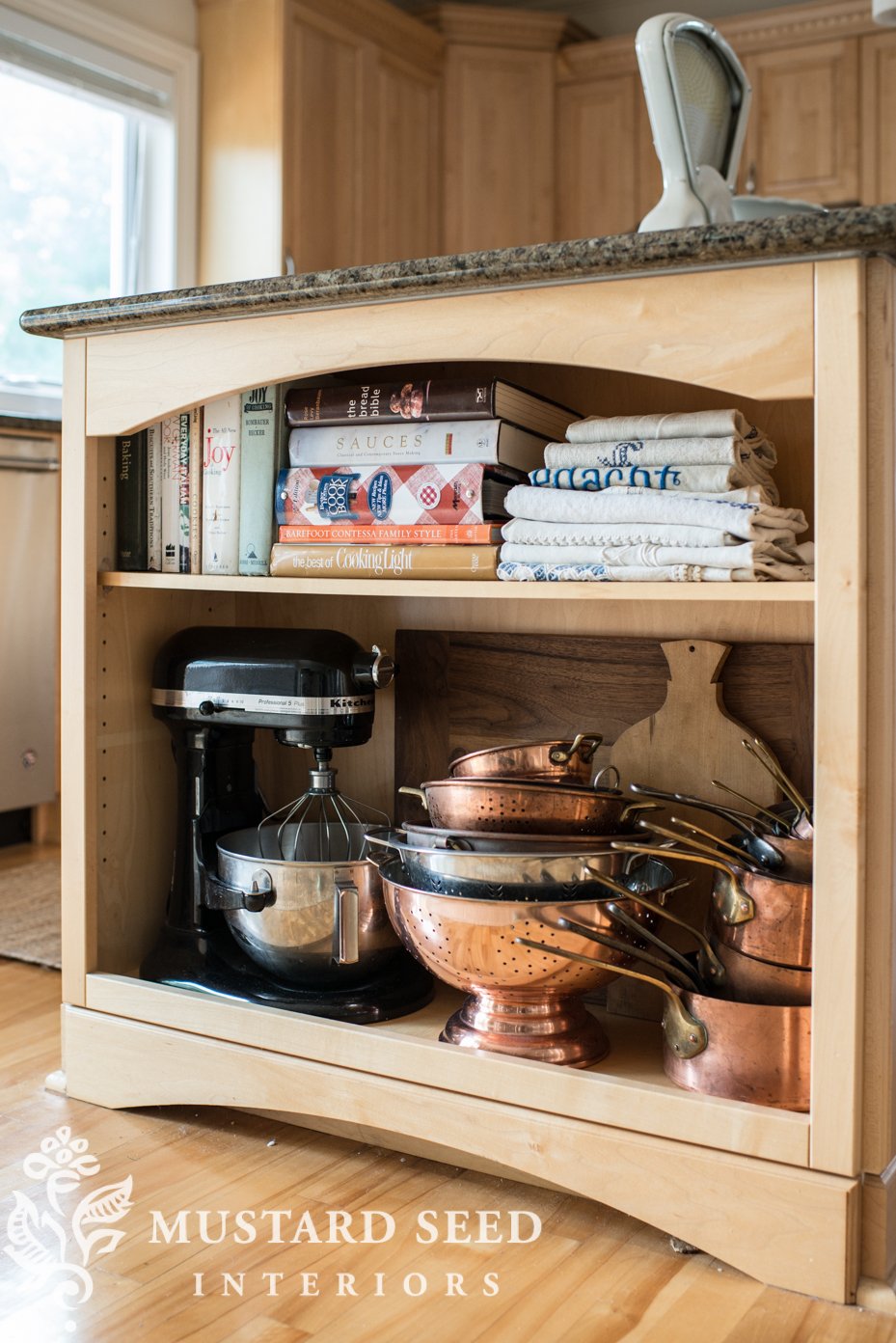 Yeah, I didn’t vacuum before I took this picture.  I figure you’ve already seen the dirty toilets (and my bare hand in them), so what are a few crumbs and dust bunnies between friends? 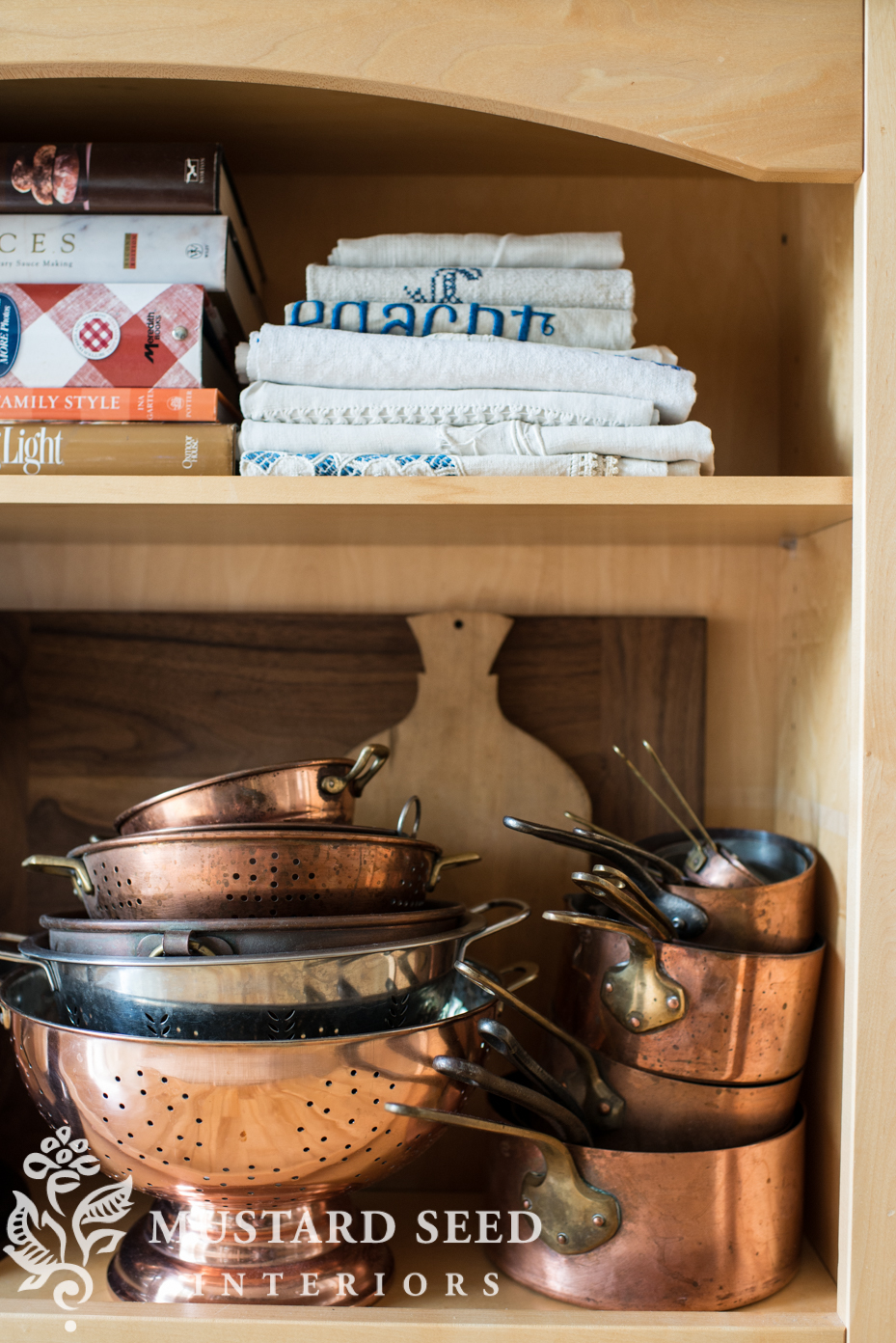 Most of the copper will hang on the pot rack once it’s installed, but I’ll probably keep a few pieces here.

While this kitchen doesn’t feel as big as my last kitchen, it is well thought out and has some upgrades that I love, like a trash drawer, large pantry, and these storage drawers next to the stove… 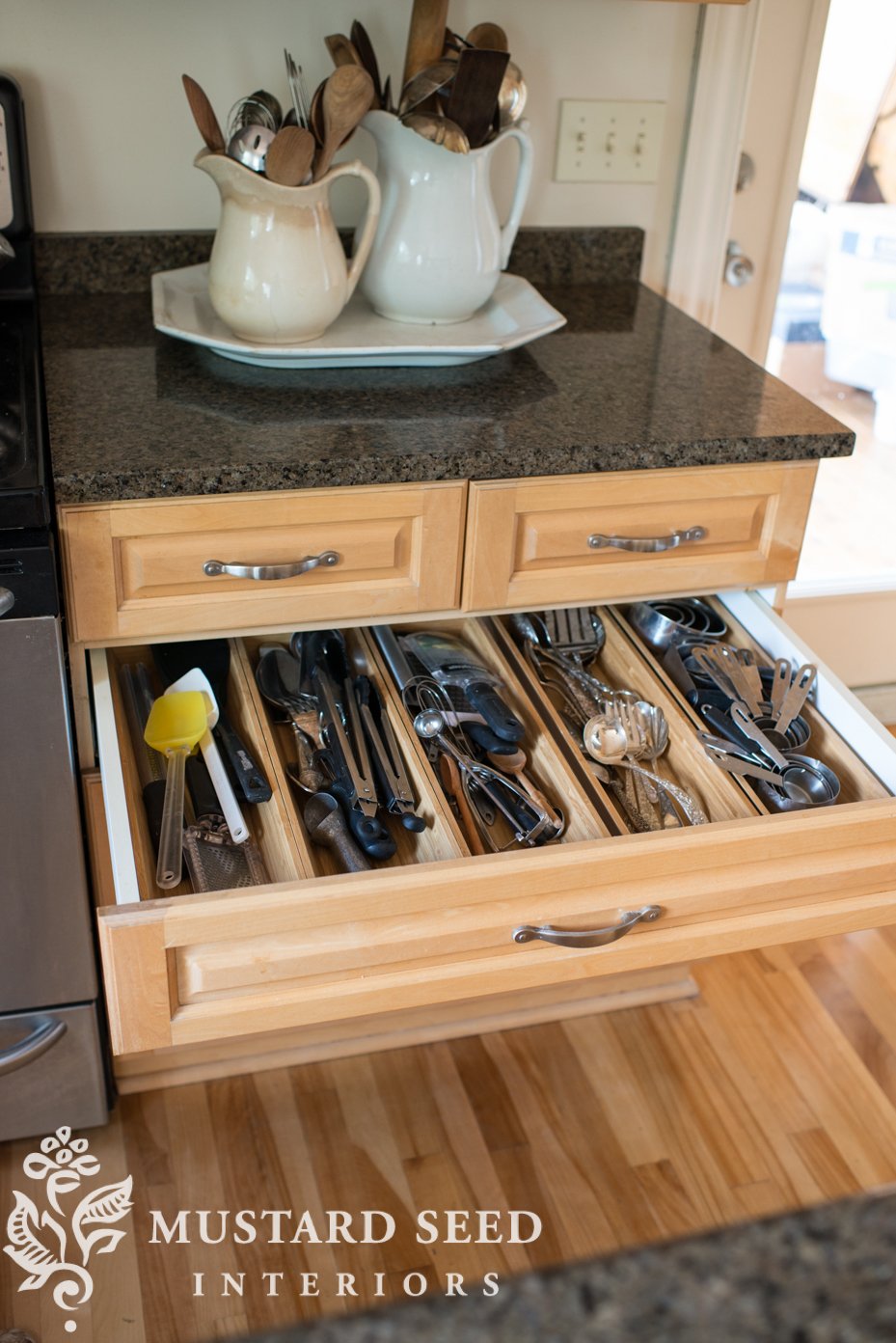 I already had the bamboo organizers from Ikea and they fit perfectly!

Everything is sort of thrown in there at the moment, but that’s how it is when you move.  At least they are in a drawer. 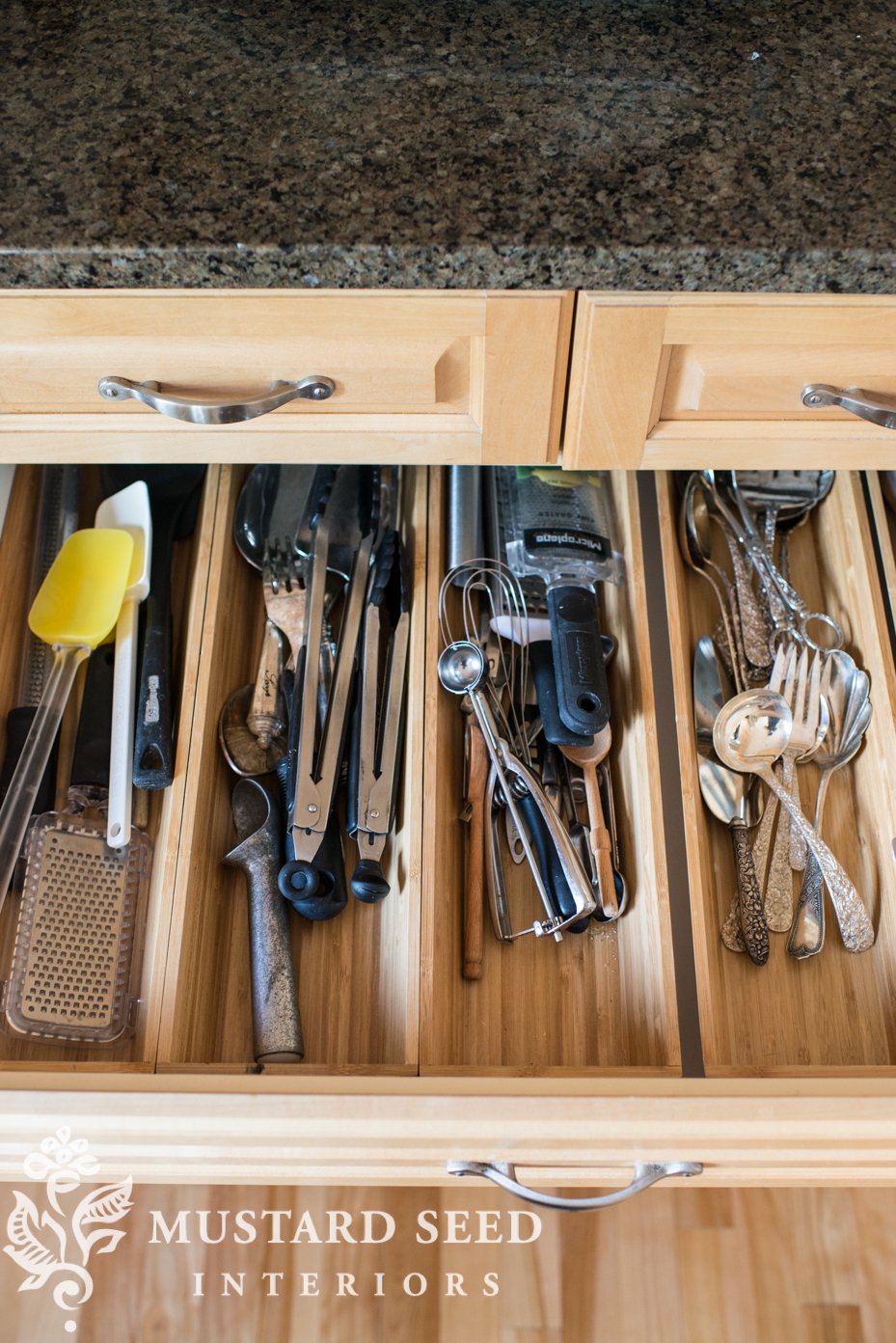 One early struggle was figuring out where to put the microwave.  When we were in a tiny townhouse, we lived without a microwave for two years, because I refused to give up counter space for one.

There is a lot of work surface on the island, but not a lot of space for countertop appliances.  The microwave was taking up too much real estate for my taste. 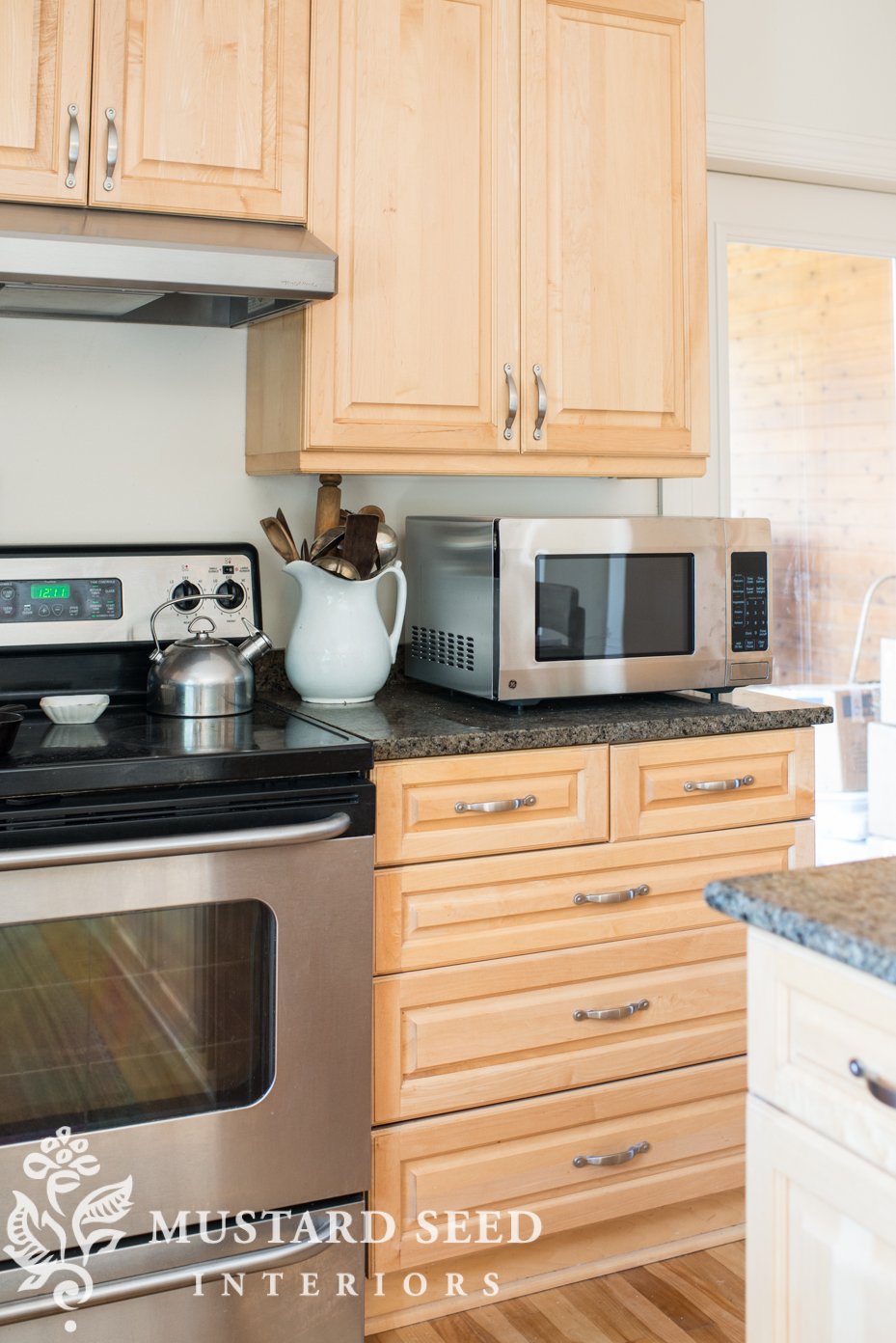 So, we came up with a solution to put it in the pantry.  I’ll show you how we did it in another post. 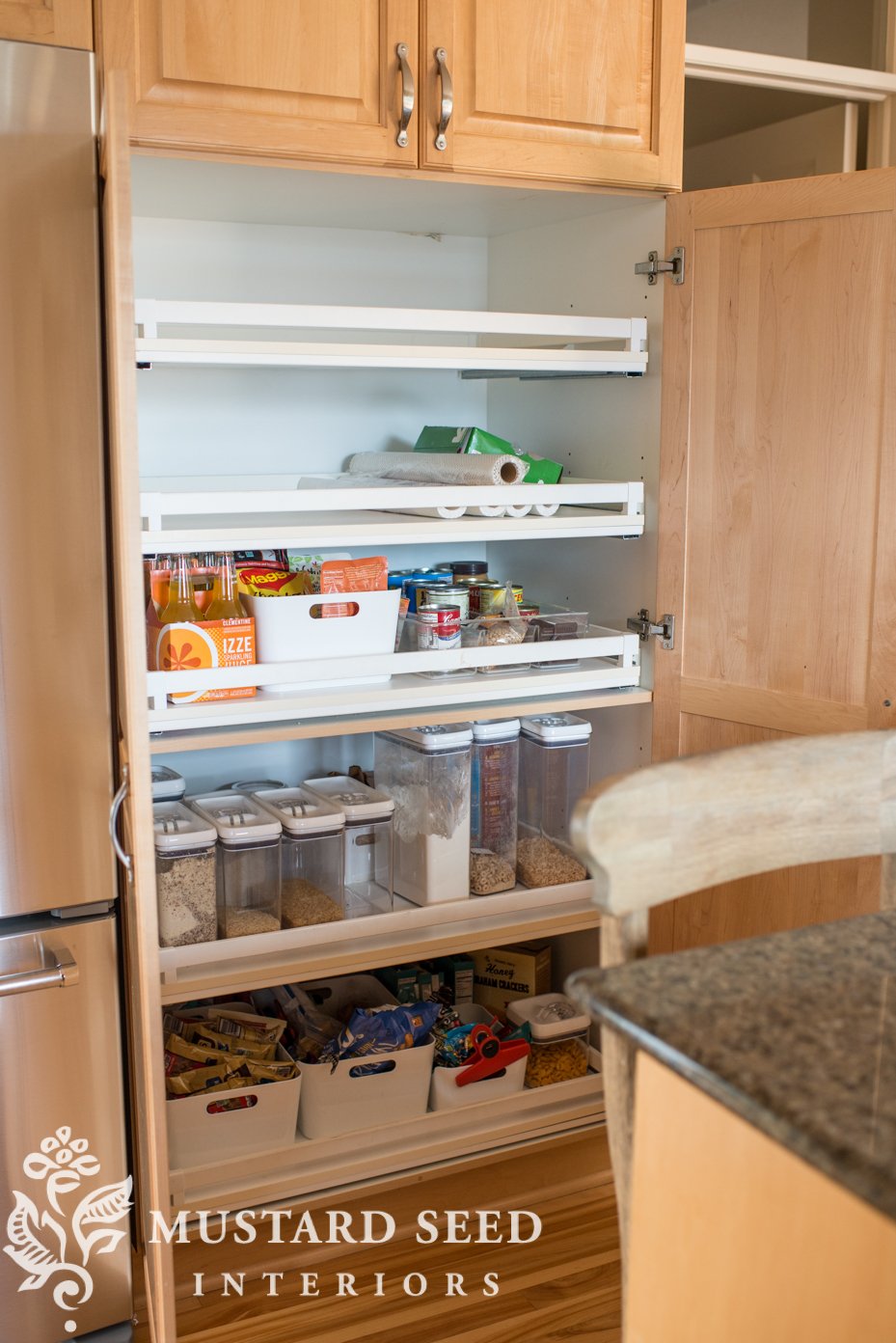 In addition to moving the microwave, we have done a few other things in the kitchen already.  We had to replace the refrigerator right away.  It had a large crack in the freezer and the ice maker and water dispenser weren’t functioning.  I had never had the need or occasion to pick out my own appliances before, so that was fun!  I went with Kitchen Aid and I’ll share more about it in another post as well.

It’s so sleek and pretty! 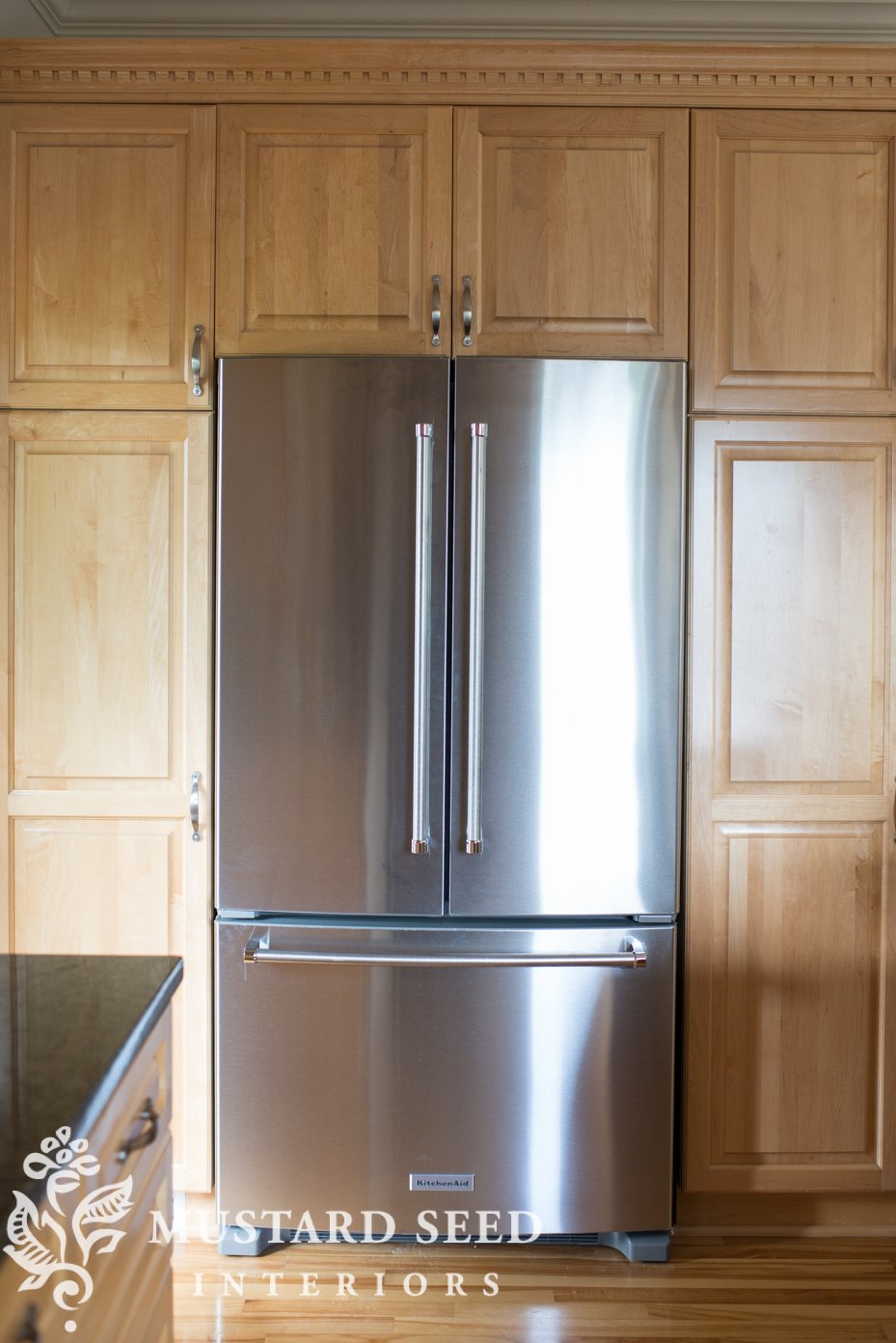 And, a small thing, I replaced all of the fluorescent bulbs, which cast an unnatural orange light, with daylight incandescent bulbs.  It’s amazing what changing out lightbulbs can do!

So, there is the kitchen!  I can’t wait to see my vision come together and share the process with you.

And, lest you think I am unpacked already, let me take a few steps back… 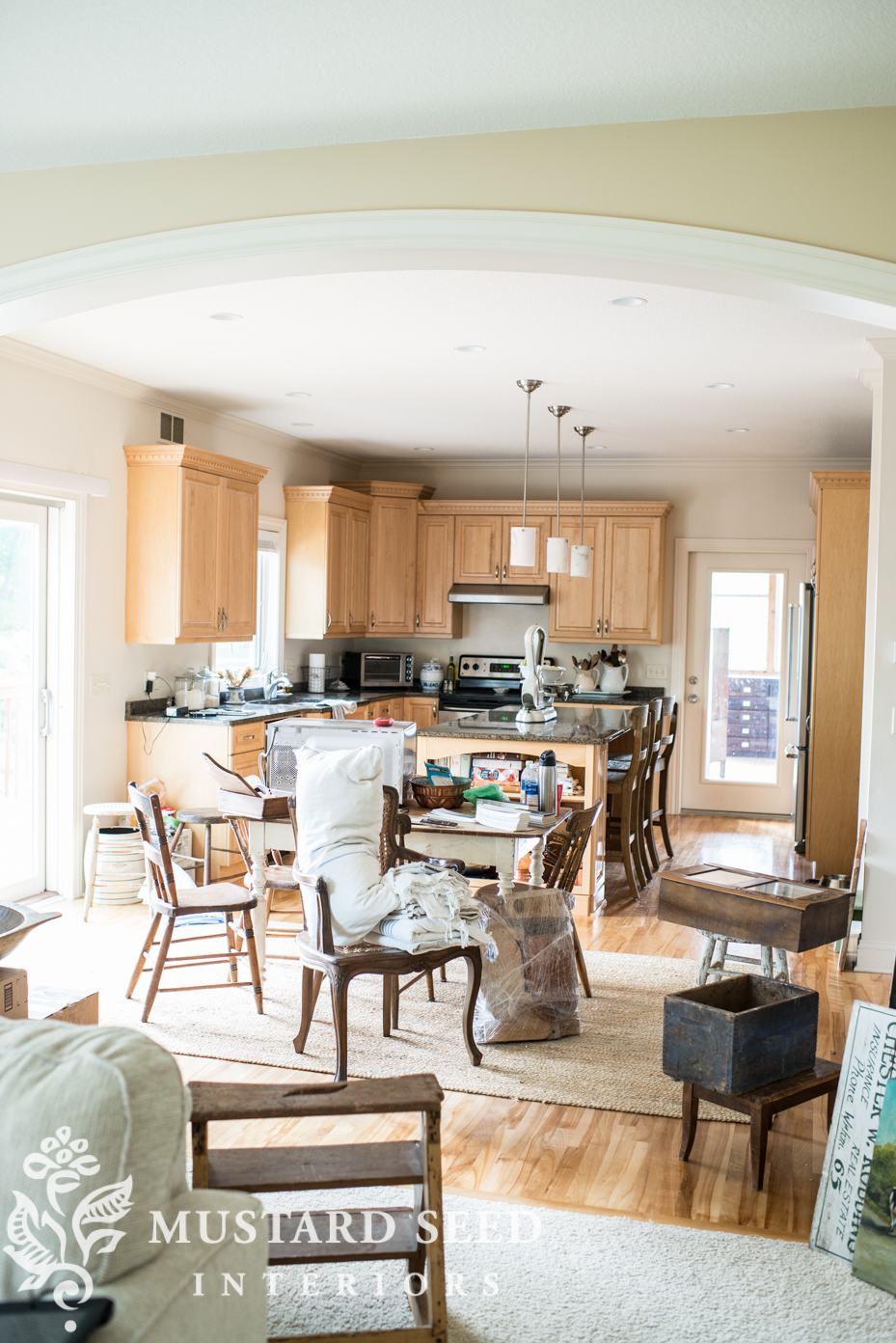 There is still a lot more to be done, but we’re making progress!