I finally made some more progress on the basement family room makeover in the latter part of last week.  Jeff helped me hang the deer head and I finished painting the fireplace surround and mantle.  It didn’t look bad before, but it just didn’t look like “me.”  The shiny black granite tile specifically felt a little too modern for my aesthetic.  So, I used the same technique I used when painting the granite tile around the fireplace upstairs.  (You can find that tutorial HERE.)

And, it works so much better for the decorating direction I’m heading. 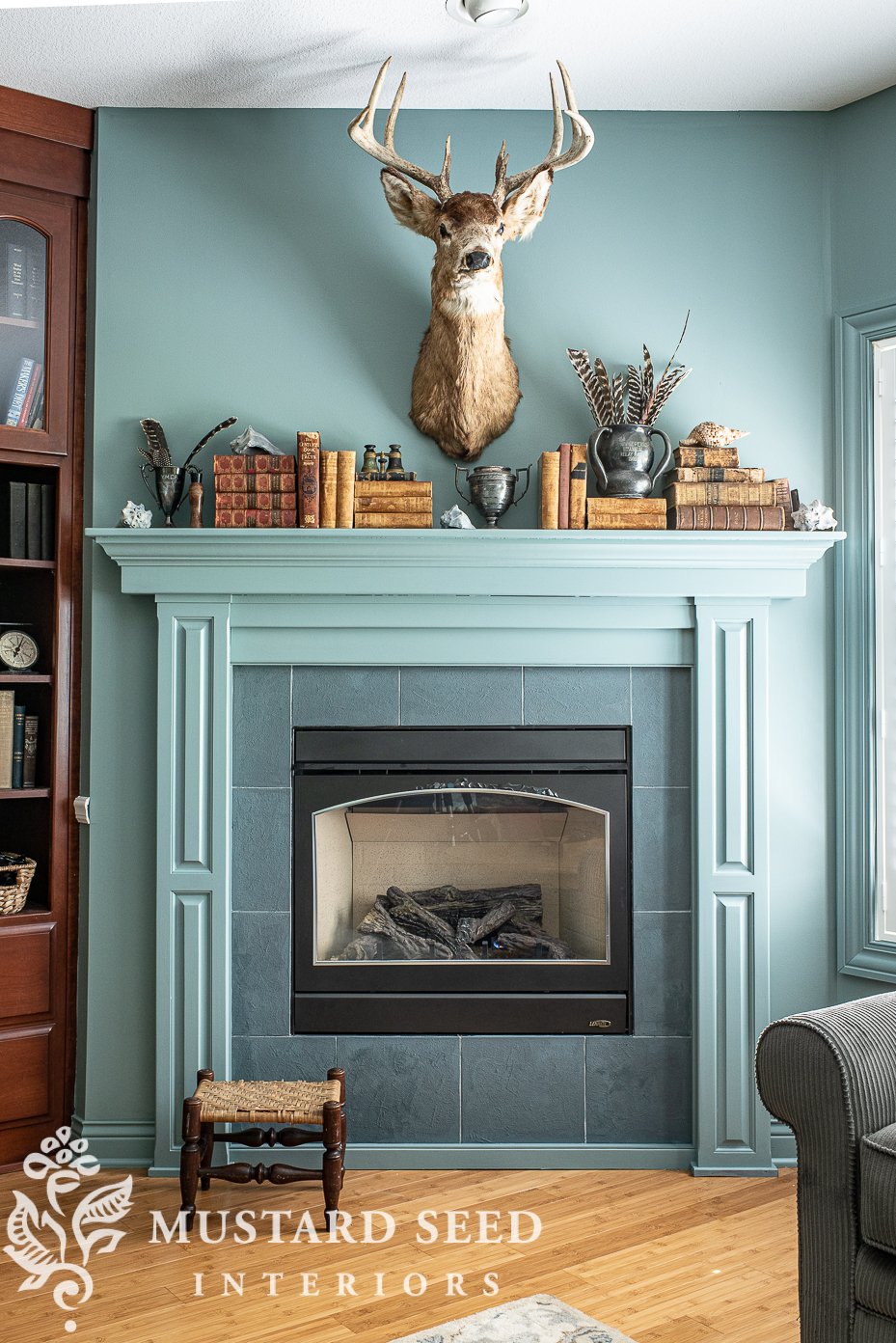 Here is how it looked before… 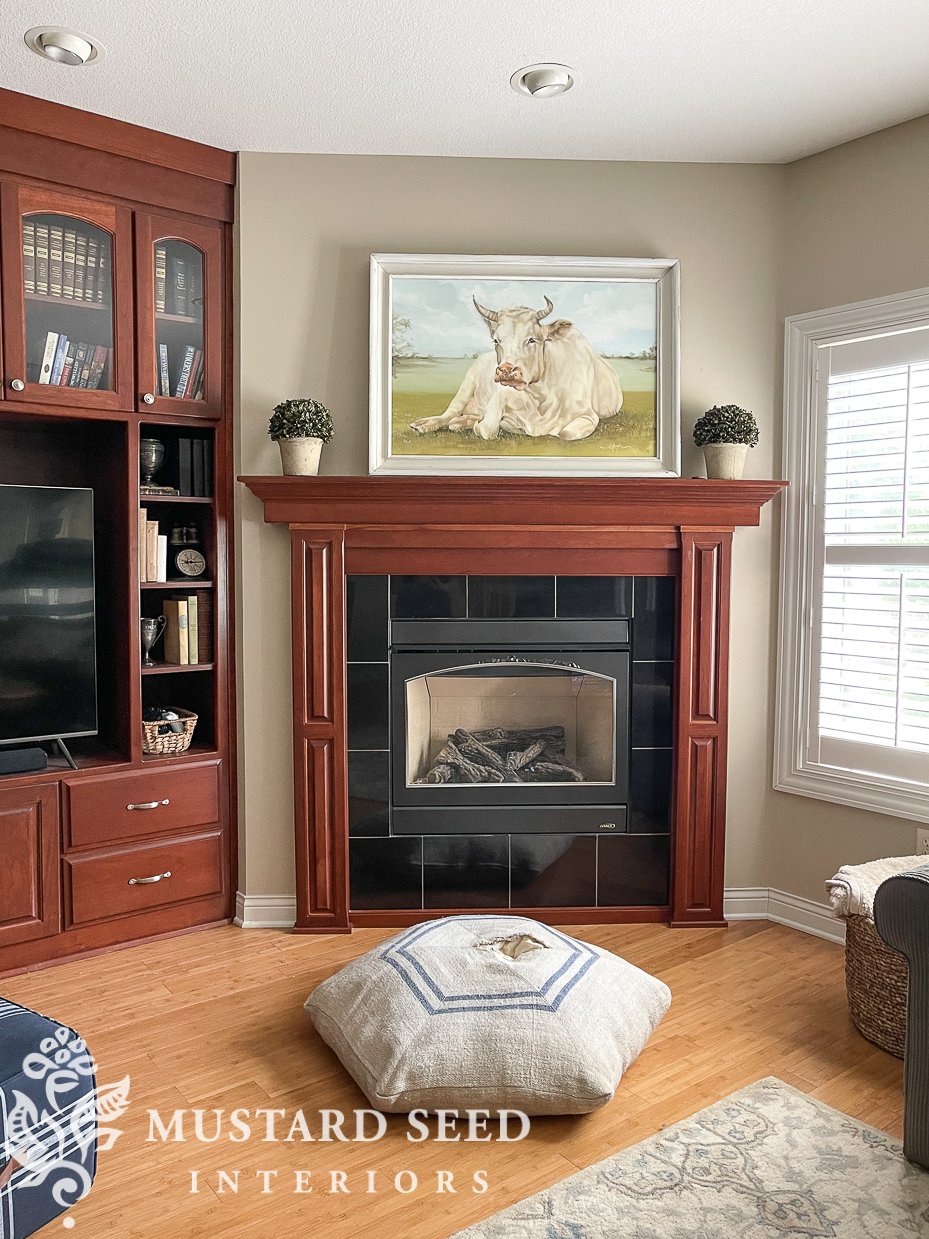 The walls are painted in Oval Room Blue, Modern Emulsion finish by Farrow & Ball from Dreamy Whites.  I used a STIX primer tinted to Oval Room Blue to prime the fireplace surround and the tile.  Once that fully dried over three weeks or so (I’m being facetious because I was just procrastinating), I painted a cost of Nicrotex textured paint over the tile.   This is a product used for creating a “grippy” texture on climbing walls and we used it when we built a climbing wall for the boys during the lockdown.  As I was brushing it on the plywood climbing wall, I realized that it would be great for making the flat granite tile look more like stone or slate.  It worked like a charm on the upstairs fireplace, so I repeated that trick here.

So, I brushed two coats of Nicrotex over the primed granite… 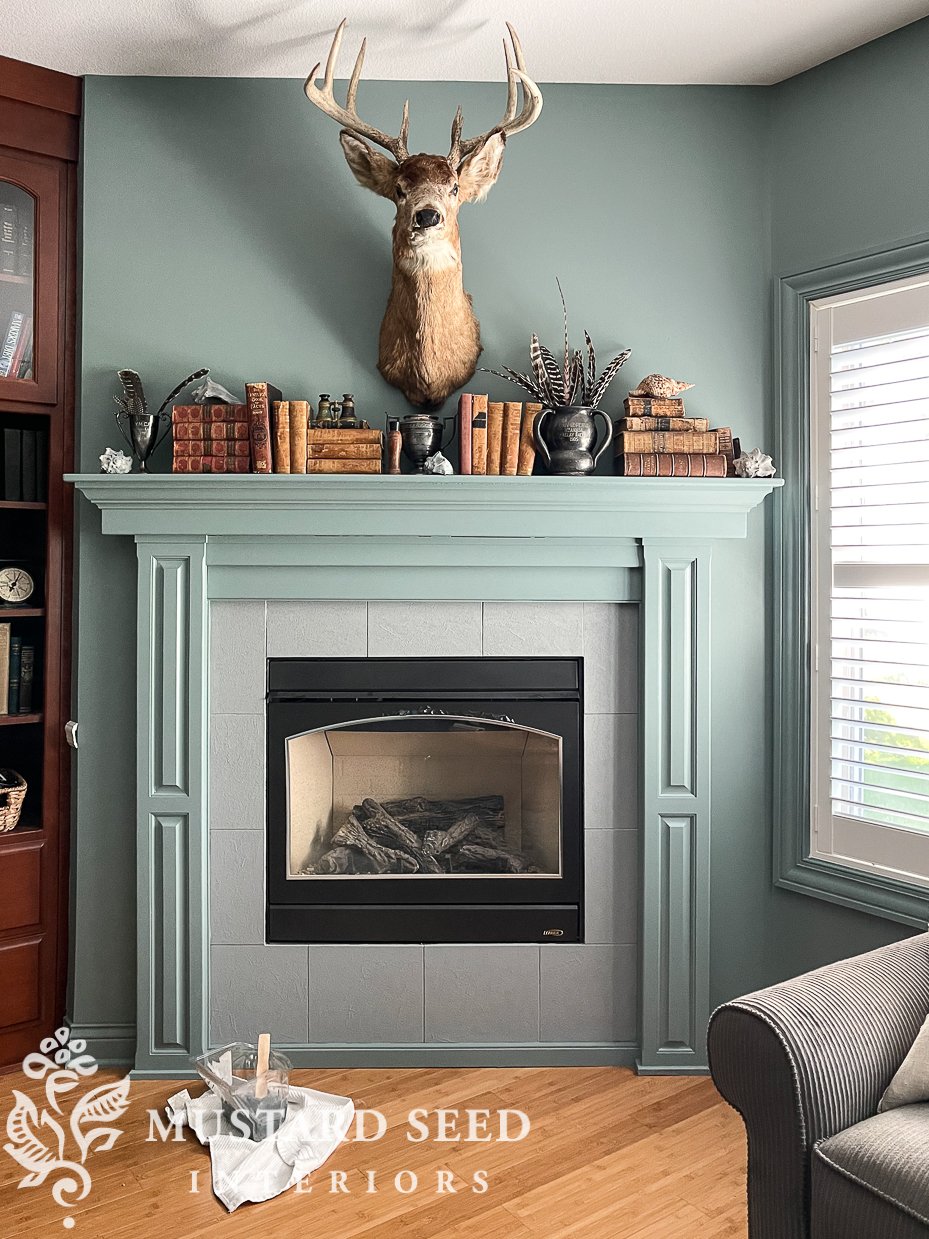 The color of the Nicrotex was terrible against Oval Room Blue, but that was okay because I knew I was going to paint it.  I mixed up a batch of MMS Milk Paint – two parts Trophy (a warm gray) and 1 part Artissimo (a dark navy blue) to create a dark blue/gray.  Not only would it make the painted tile look more like slate, but it would provide a nice transition color between the blue trim and black firebox. 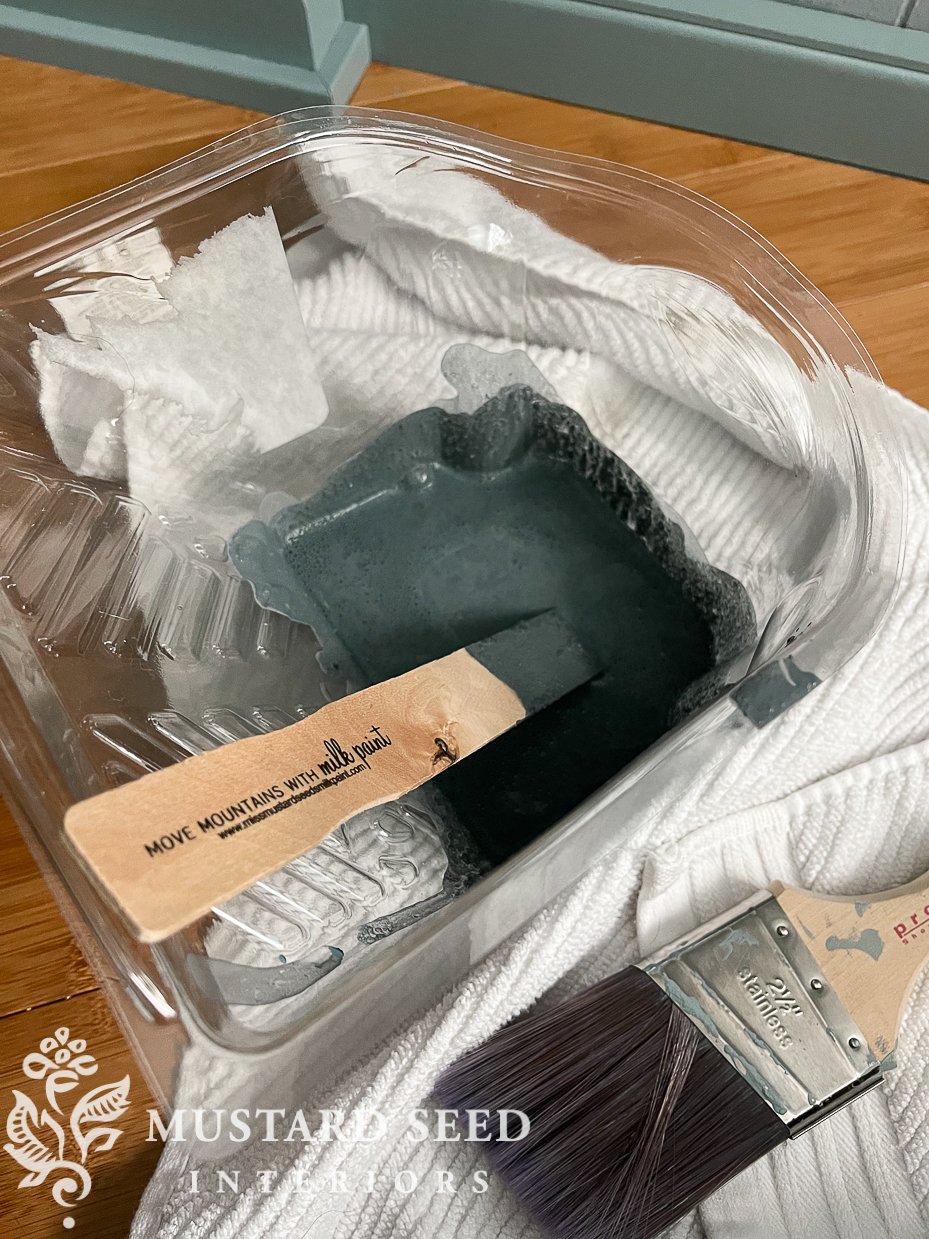 I carefully brushed it on, leaving some of the grout lines unpainted, so they would look more like real tiles and less like painted tiles. 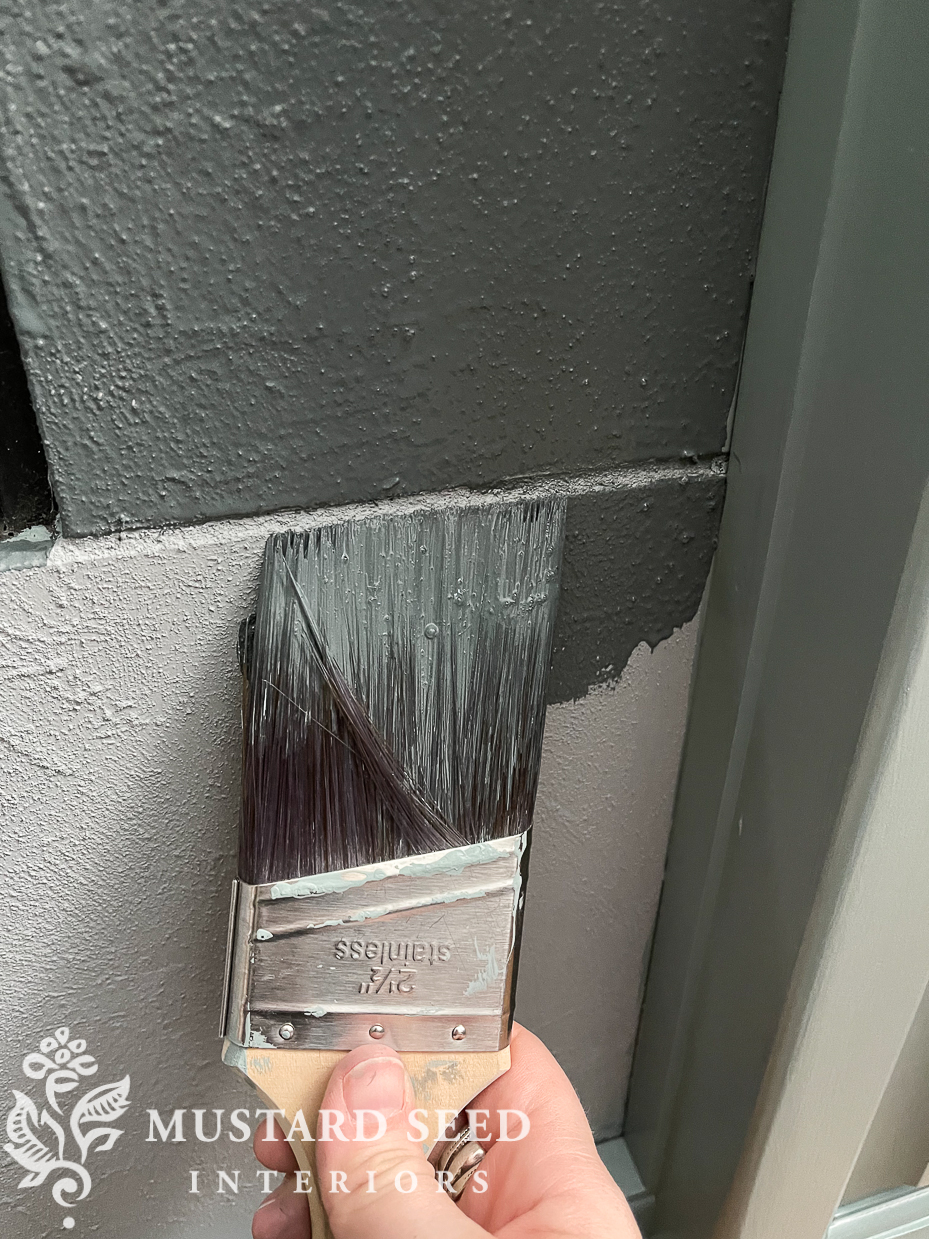 The paint is still drying a bit when this picture was taken (hence the darker spots), but I love how it turned out.  For just using paint that I already had, I’m really pleased with the results.  Now, I need to fix where the paint chipped around the fire screen.  Last year, the fan wasn’t working properly to vent the heat, so heat was building up, causing the paint to bubble and flake off.  I’ll share the process of sanding it and repainting it in a high heat paint.  That’ll be the finishing touch to make this fireplace look sharp. 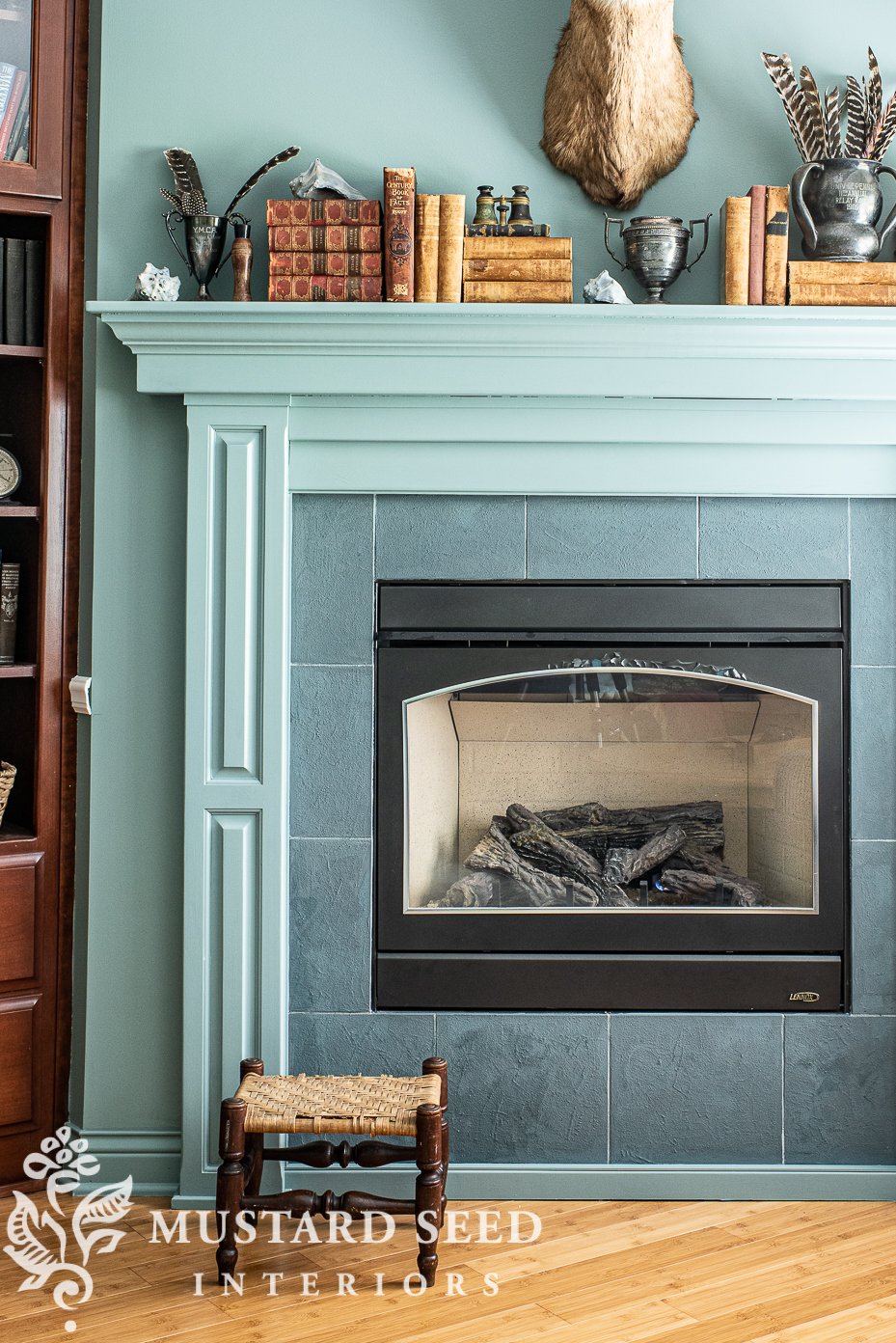 And, let’s talk about the deer head.  For those who hate taxidermy, just close the browser and look at things that inspire you.  I really do get it.  Taxidermy sort of creeps me out, but I envisioned a deer head in this room and I happened to find one at Gold Rush Days for $50.  I liked this one because it was $50 (not $300 like the others) and it had cute ears, nice antlers, and a sweet face.  I also like that it’s vintage (from the 1940s or 50s.)  The only issue was it had some areas missing around his nose.  I was able to “make a new nose” out of a piece of vintage leather the dealer gave me for that purpose.  I would’ve made a tutorial for that, but I didn’t even enjoy doing the job and I doubt my audience is interested in DIY taxidermy repair!  I couldn’t even believe I was doing it!  But, it was a $250 cost savings and therefore worth it to me. 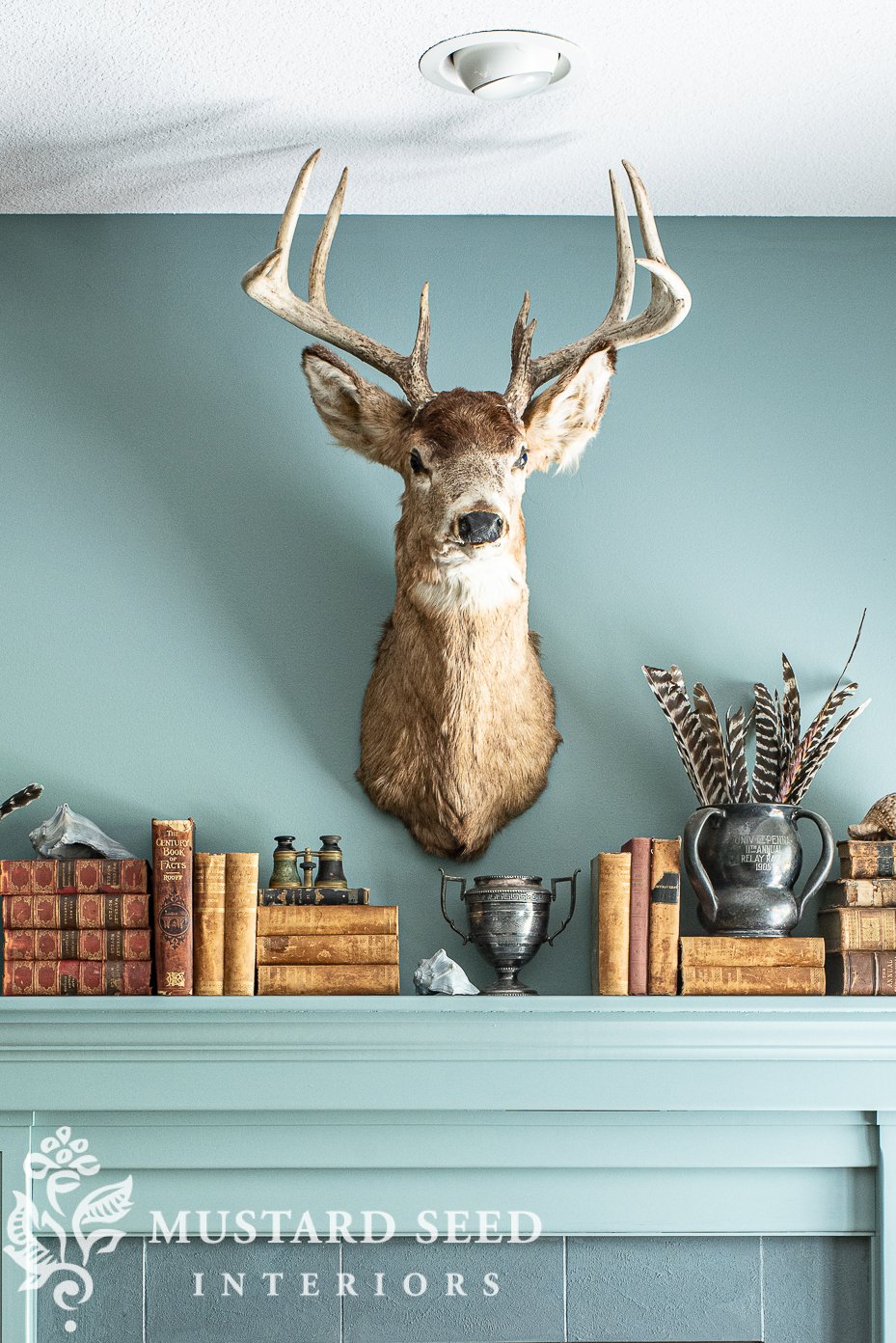 I was going to have a deer-naming contest, but I mentioned that to Jeff and the boys and they came up with a name.  Karlsen.  Karlsen the deer head.  It started out as Carlson, but then they decided he should be Scandinavian, so it became Karlsen.  That was not the name I was expecting, but it made us all laugh and it stuck. 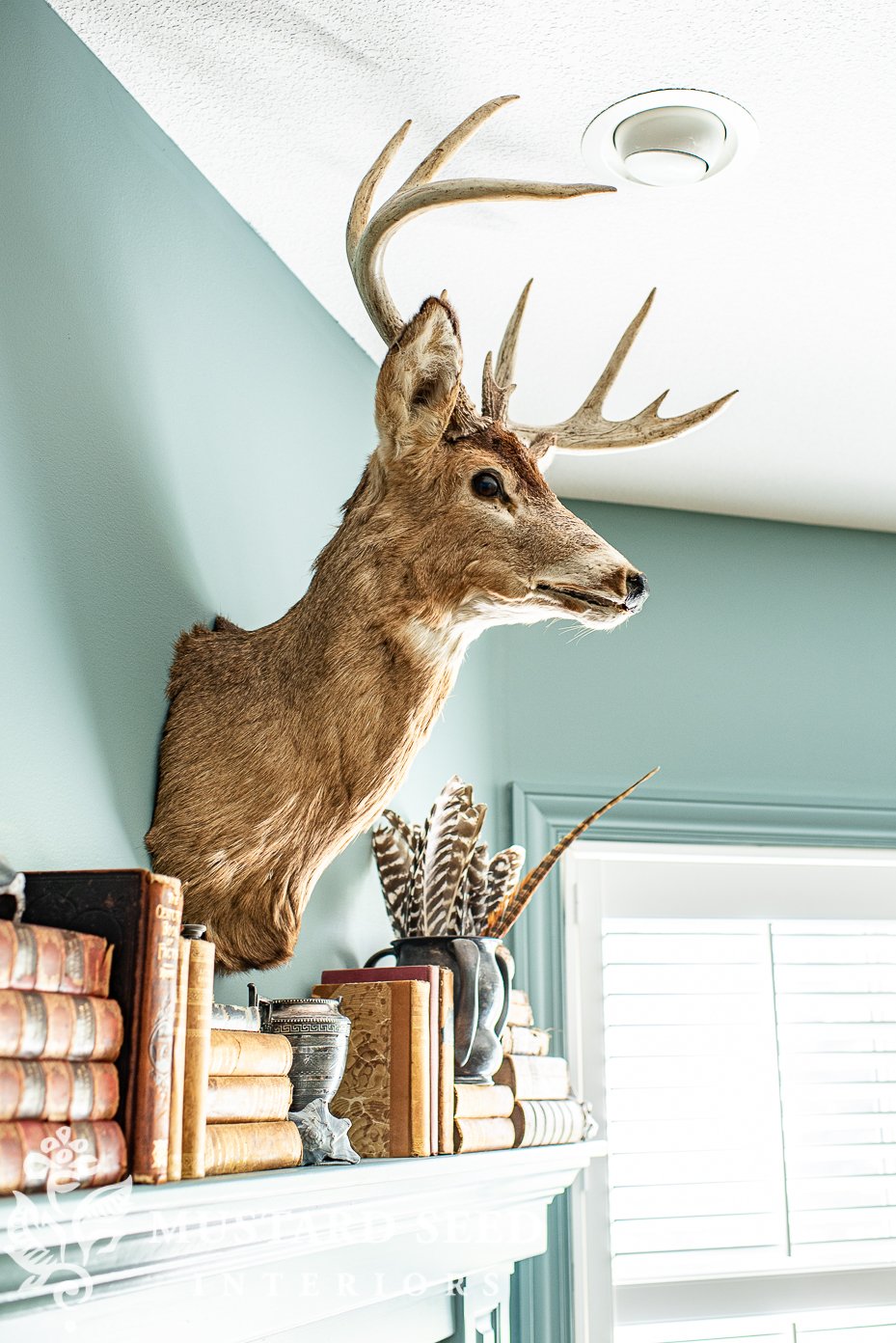 Karlsen will definitely get some festive decorations for Christmas and maybe other holidays, too. 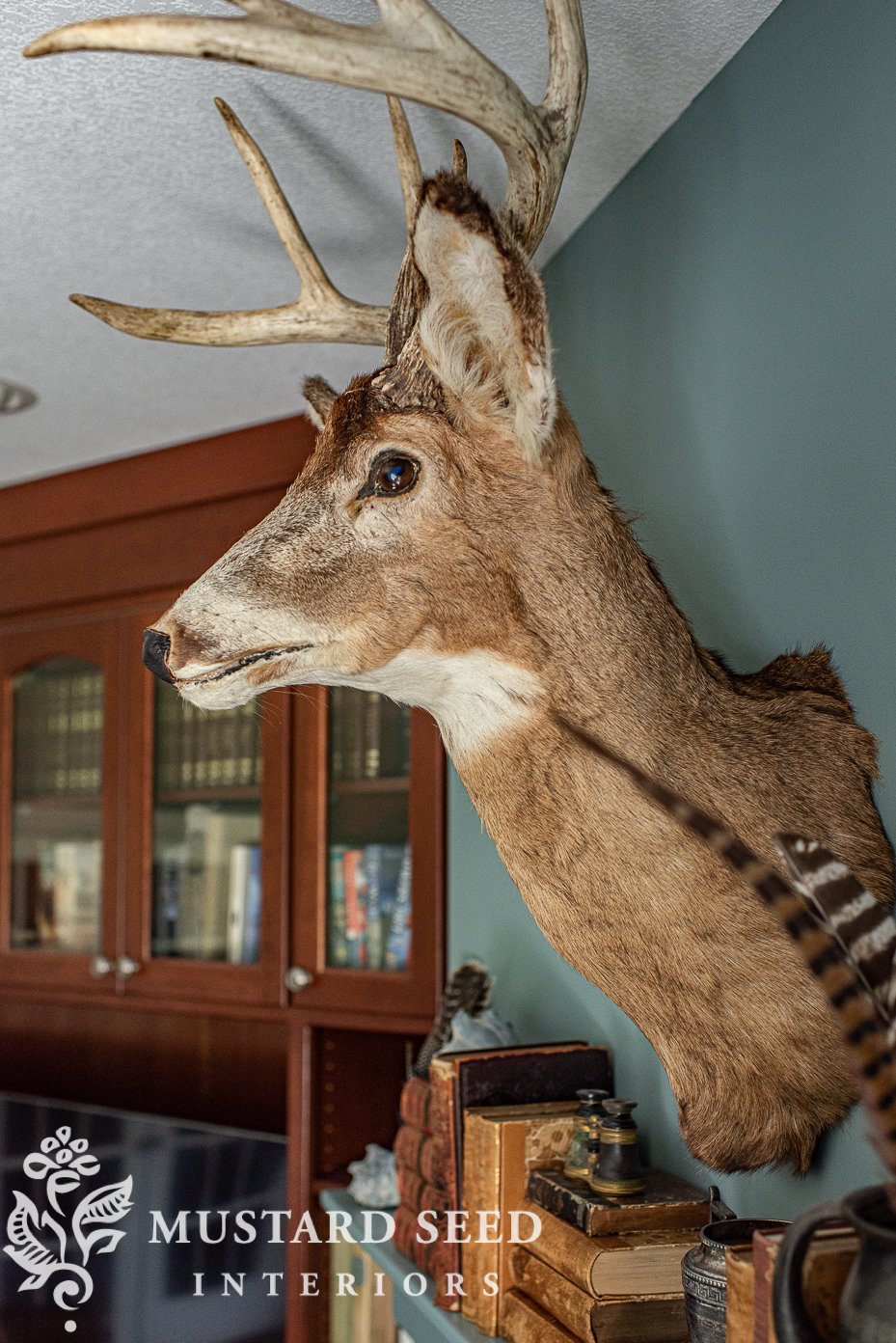 My Opa had a deer head in his den and it always scared me when I was a little girl.  When the house was full of family,  I would have to sleep on the sofa bed in the den, which meant the deer was looking straight down at me.  To make it worse, my Opa hung a wasp nest he found on the antlers, so I would have nightmares about a deer and an army of wasps chasing me!  But, as I got older, it became a staple in Opa’s house, which was our “home base” as a military family, and Karlsen is a little reminder of that. 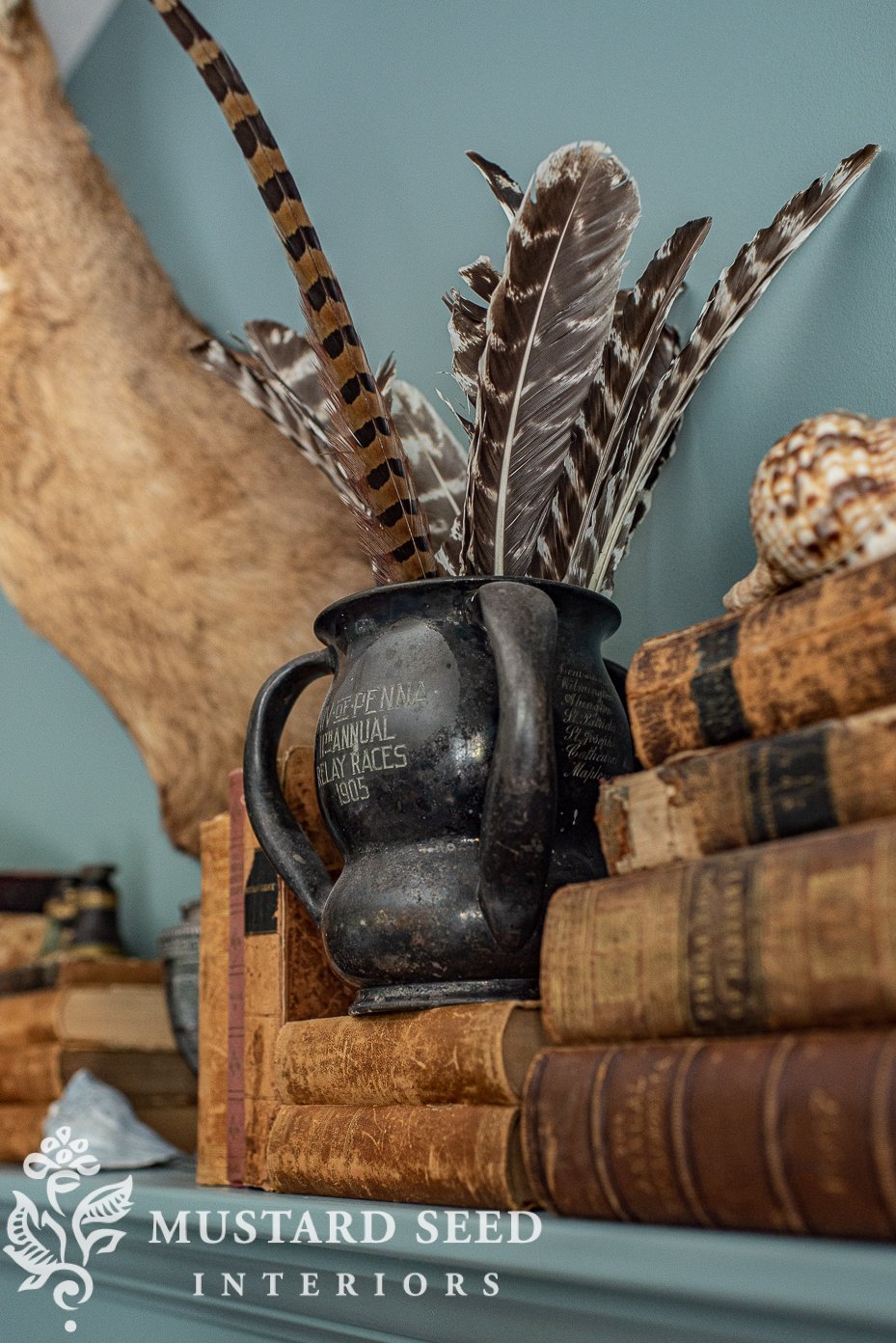 The mantle is filled with old leather books I’ve collected over the years.  Some are from Etsy or antique stores and others are from yard sales.  I included a 1905 relay race trophy from my Opa’s attic, an antique wooden duck caller that belonged to him, and some natural elements like shells and turkey feathers. 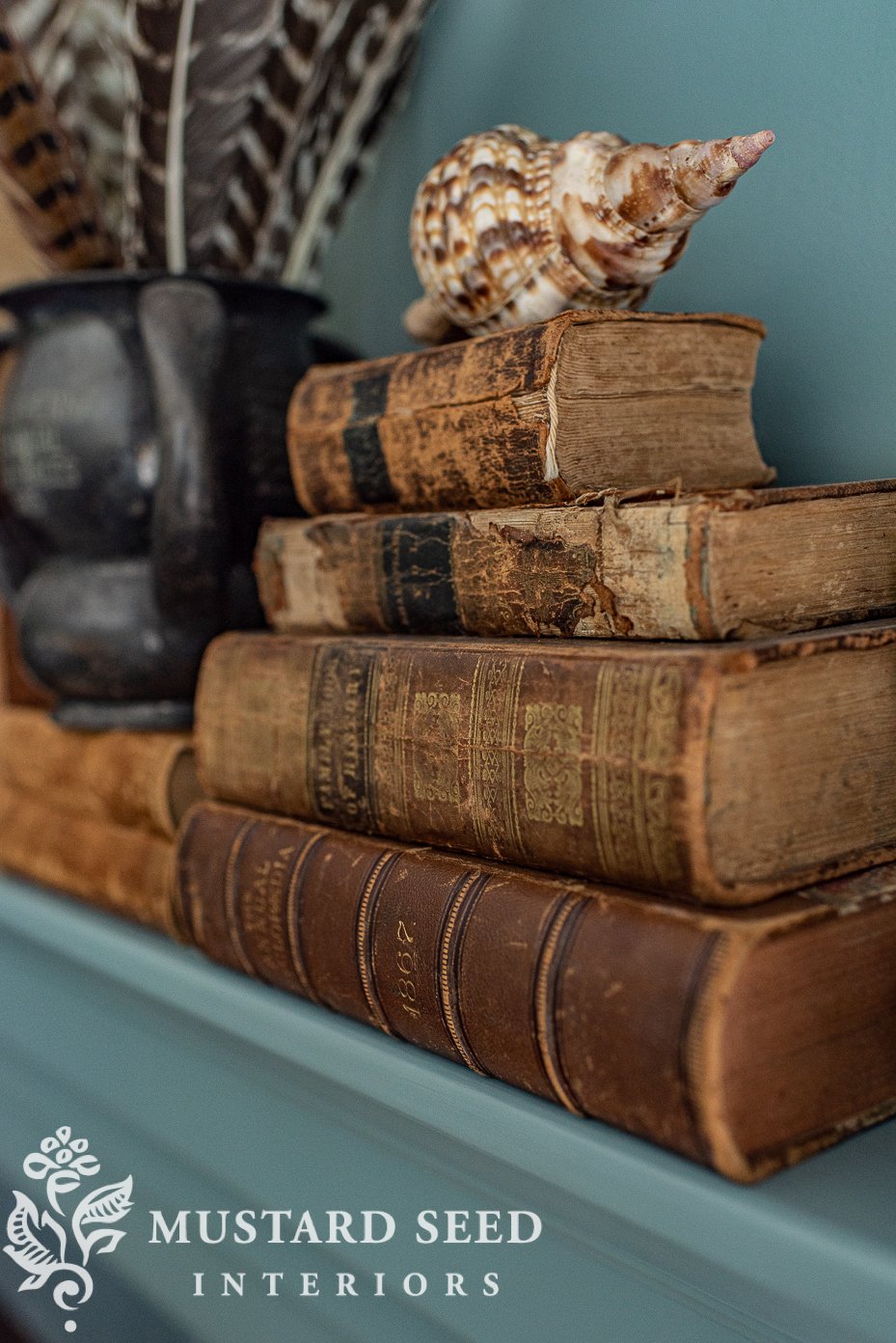 It all creates that “gentleman’s library” look I’m going for in this space.  Whether you’re a Karlsen fan or not, he fits with that aesthetic nicely.

Next up, I’ll fix the fireplace screen, finish painting, and finish the chair rail!