This weekend was Gold Rush Days in Oronoco and Rochester, MN!  We don’t have a lot of antique shops in my immediate area, so I look forward to this event every year.  It’s actually the same event held in two separate places.  The original Gold Rush Days takes over the small town of Oronoco, MN and a spin-off event happens simultaneously at the Rochester, MN fairgrounds.  They are both large events and it’s worth going to both if you have the time.

I started out of Friday meeting Cheri, my antiquing buddy.  We’ve been to Gold Rush Days twice before and we always have a good time together.  We have similar tastes and are familiar with each other’s styles, so we help look for things on our lists.  I had actually made my Gold Rush Days list weeks ago, so I could be focused and intentional about what I bought.  Of course, there are always things that speak to you when you’re there, but it helps me a lot to have a plan.  Otherwise, I get overwhelmed and distracted! 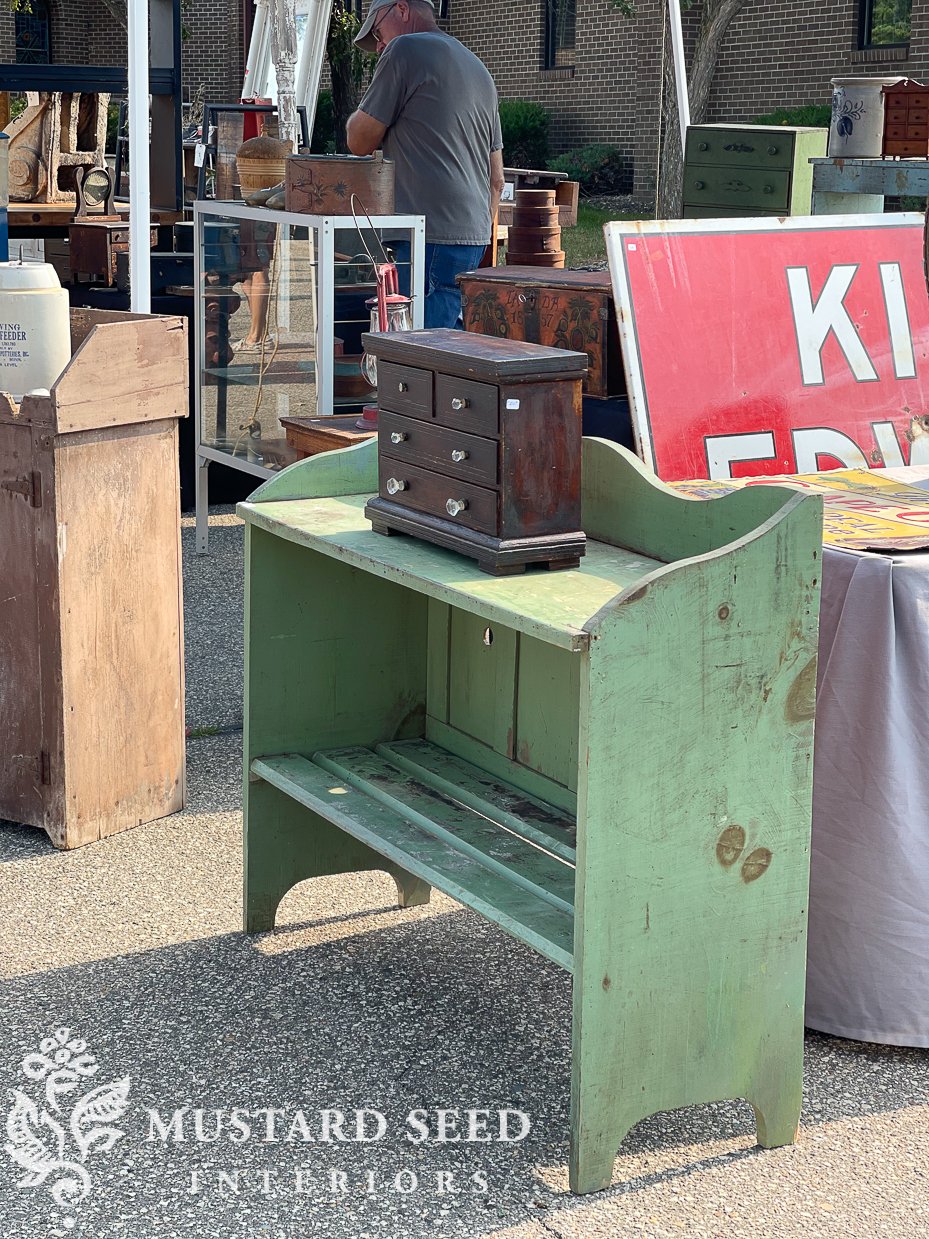 My Gold Rush Days 2021 list was – a cabinet for the basement family room to hold puzzles and games, a deer head, antique leather-bound books, and gold frames for paintings.  Of course, I was always going to be on the lookout for cool art supplies, papers, pens, and pencils.  Most of my shopping, though, was going to be geared towards the basement family room makeover.

Even with a list and a room in mind, it’s hard not to be distracted by all of the wonderful and unique things. 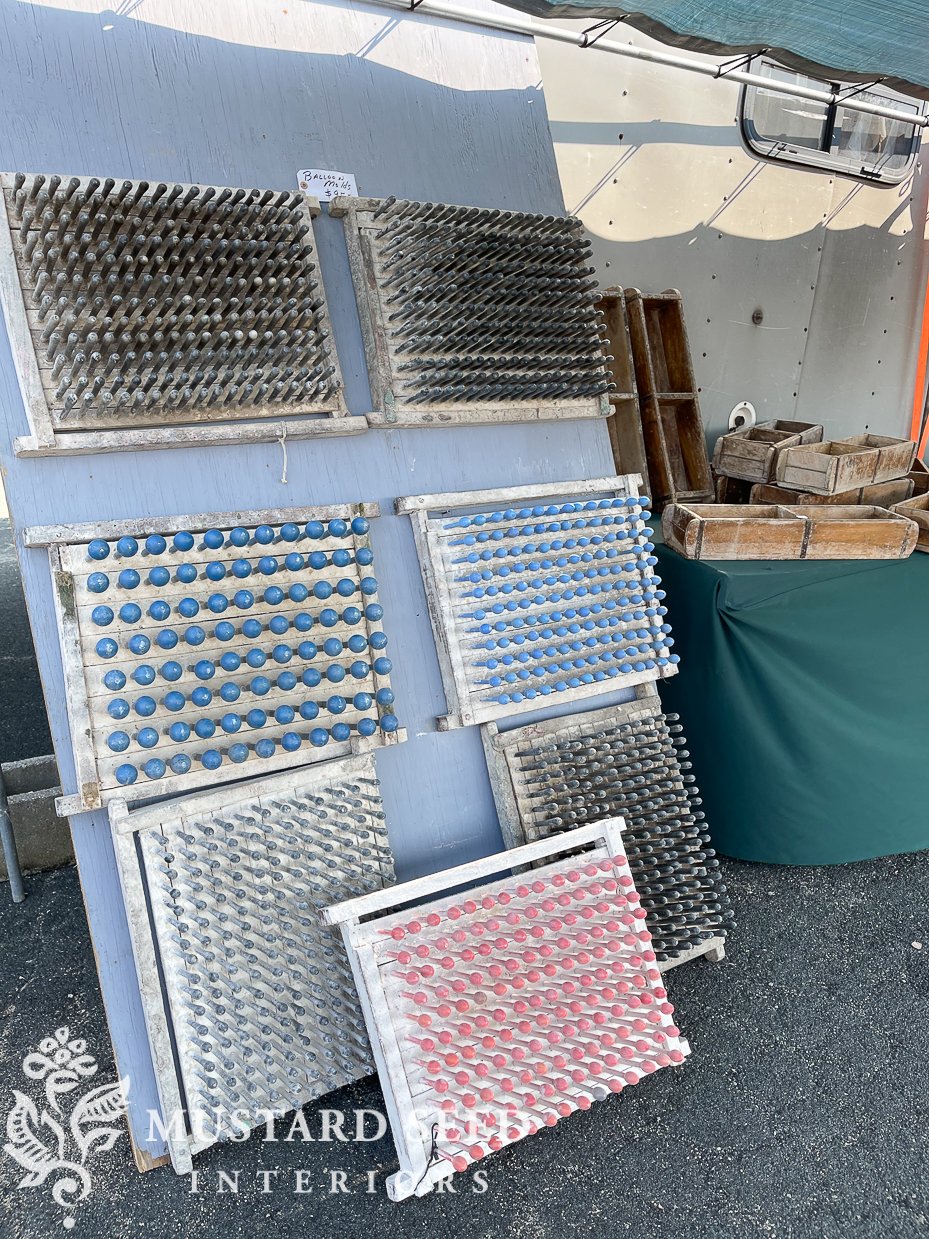 These are balloon molds!  Aren’t they so cool?  They would make very interesting 3D artwork. 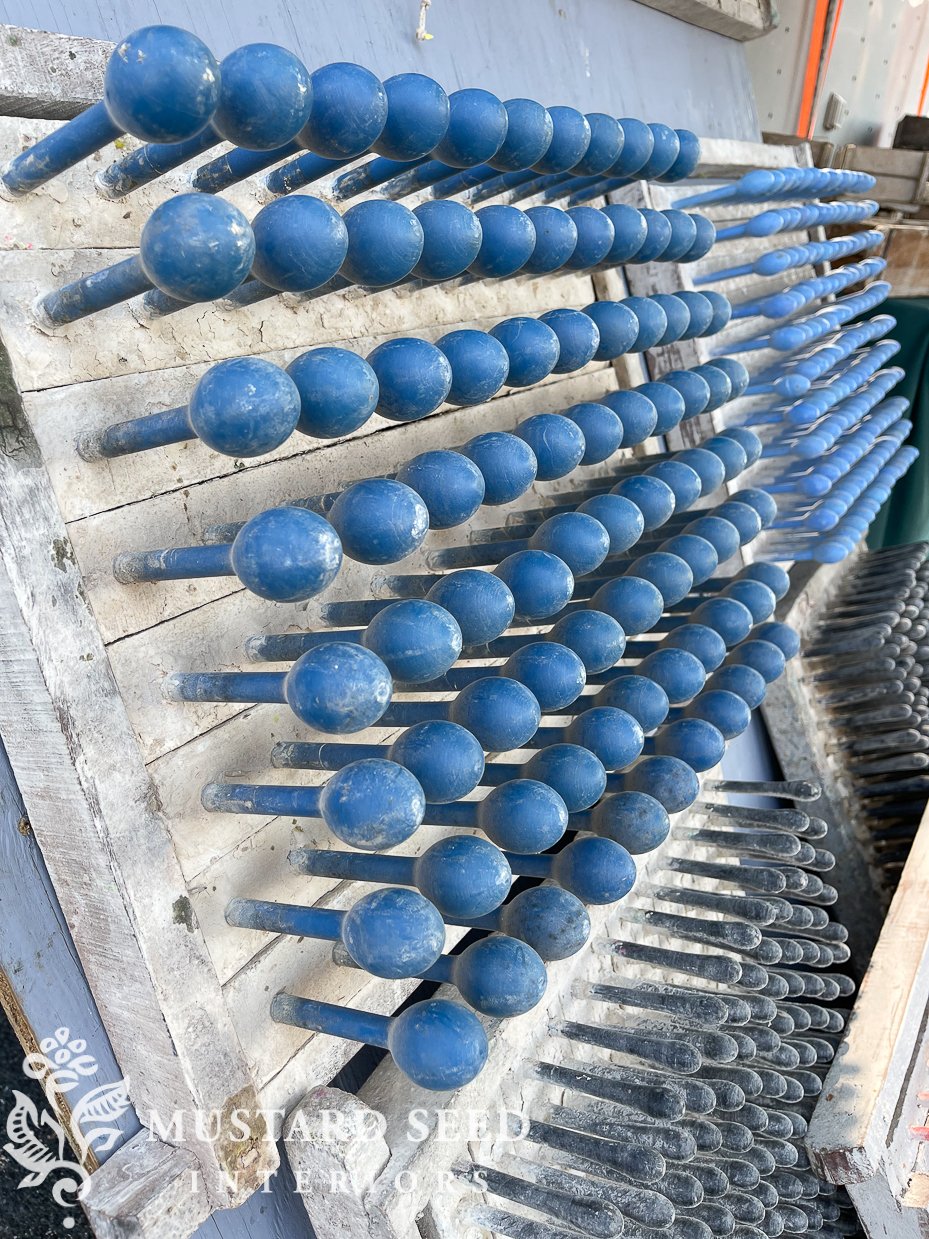 I’ve been looking for a Victrola to replace the one I sold when we moved.  This one was gorgeous but was way out of the price range of what I would spend. 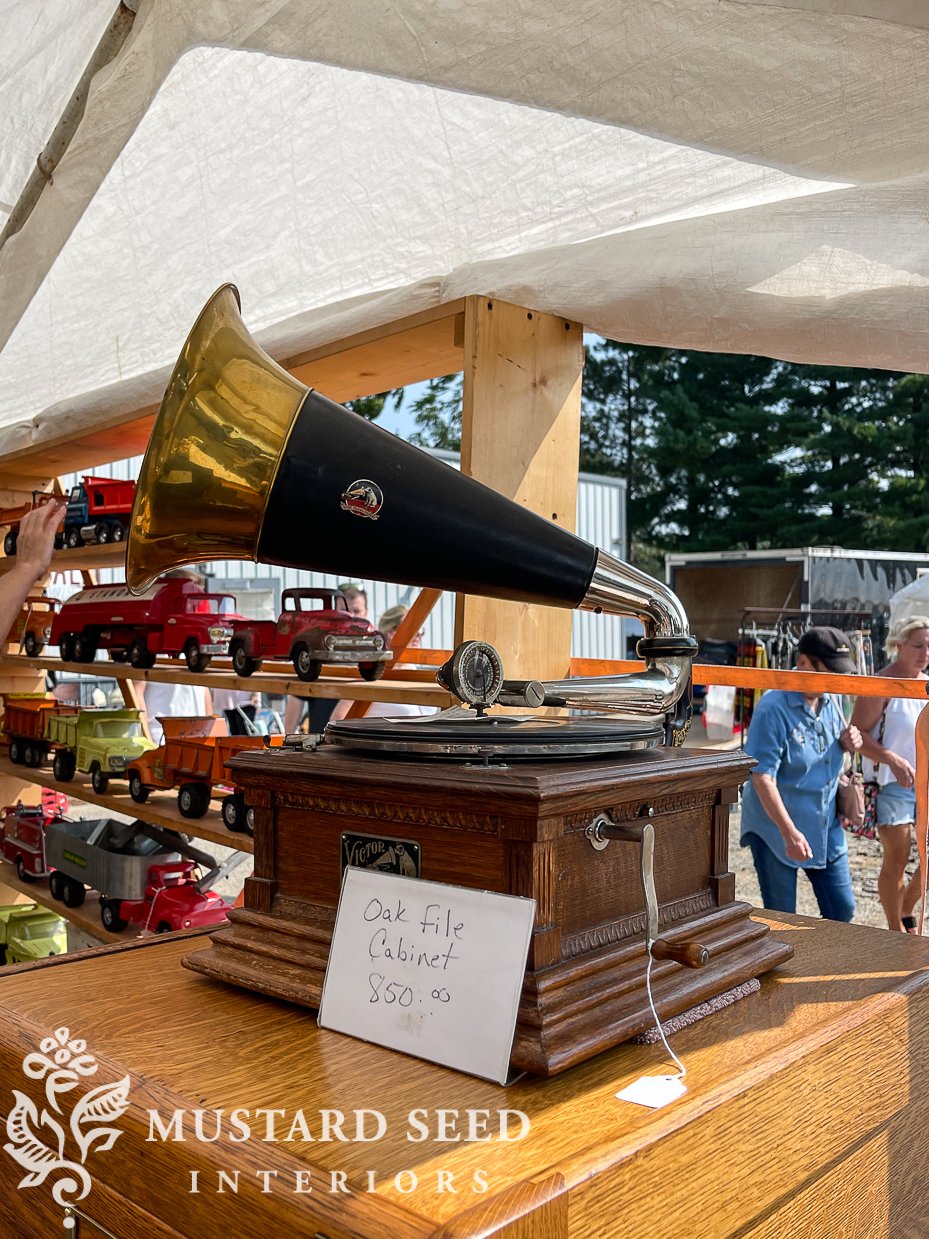 It was a simple thing, but I also loved this framed fly swatter!  I didn’t end up buying it, but I was tempted.  I love the idea of framing antique, everyday items. 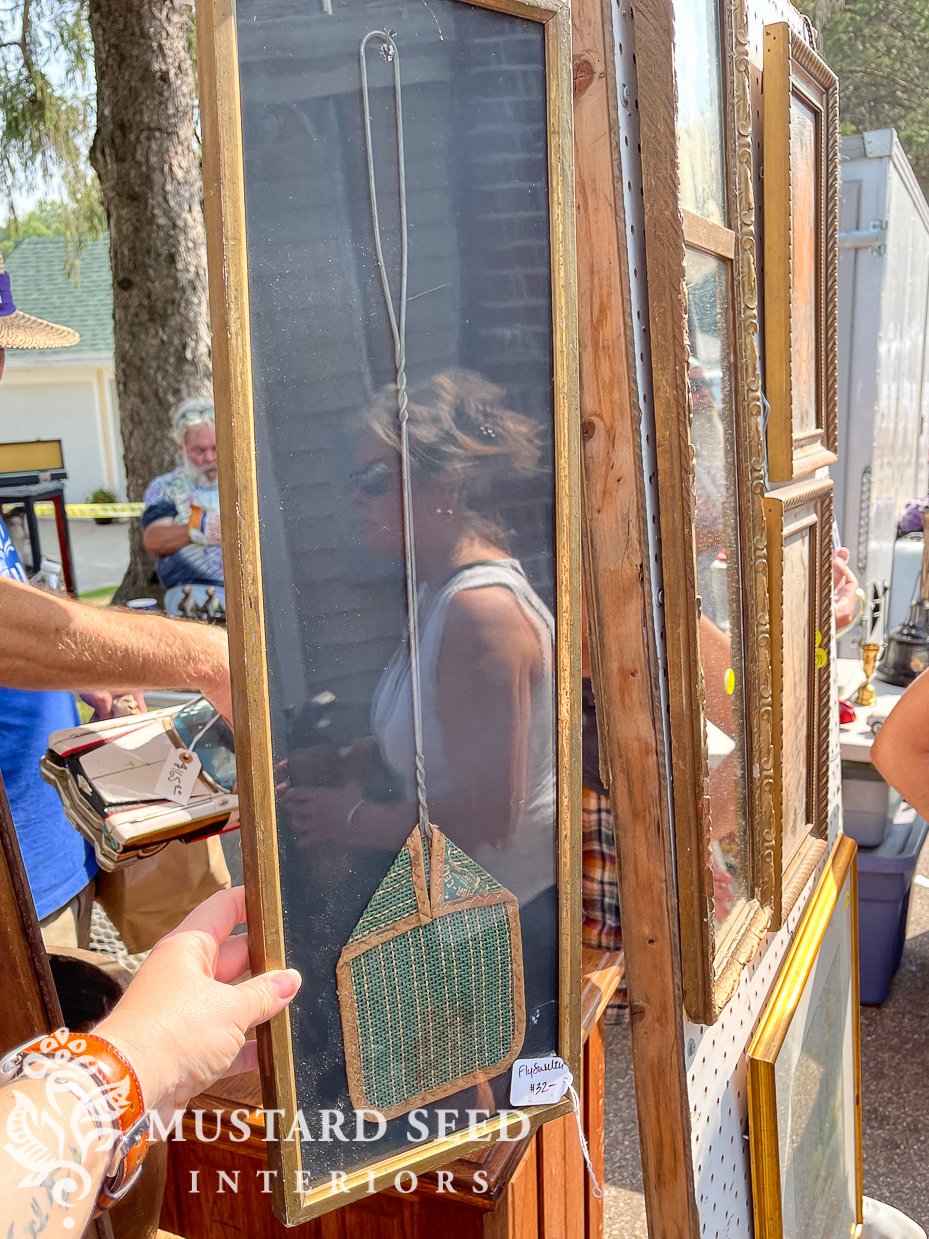 After about 30 minutes of looking around, I came across the first promising cabinet for the basement.  The size was good, I love the pine finish and the white knobs, but it felt a little primitive for the look I am going for.  It was a possibility, but I felt like I should keep looking. 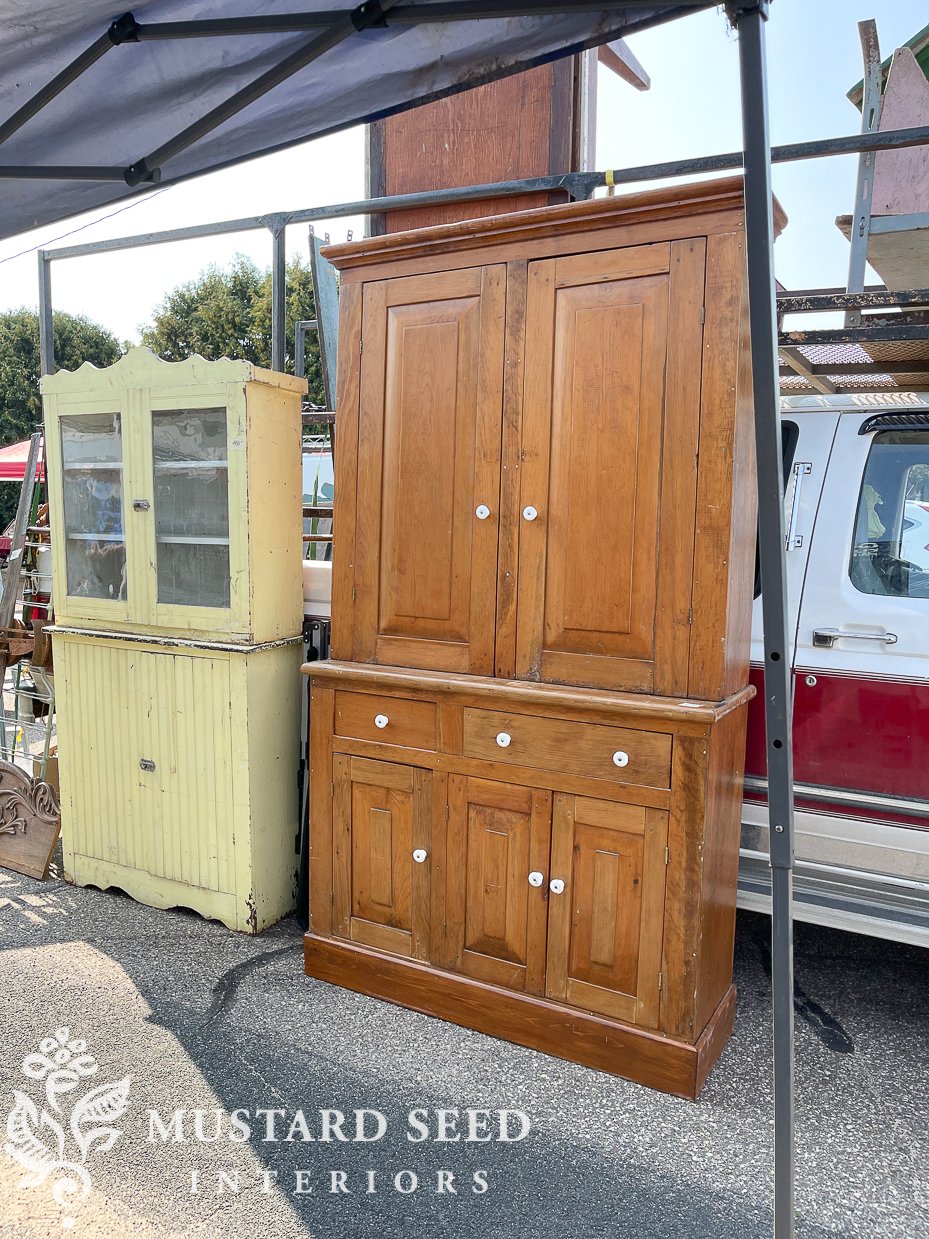 And just a tent or two over, I spotted this beauty.  I knew right away it was a winner.  It has more of an English library look and the darker wood would better complement the built-ins around the TV.  It’ll also provide great closed storage for puzzles and games.  At $450, it was also a good price. 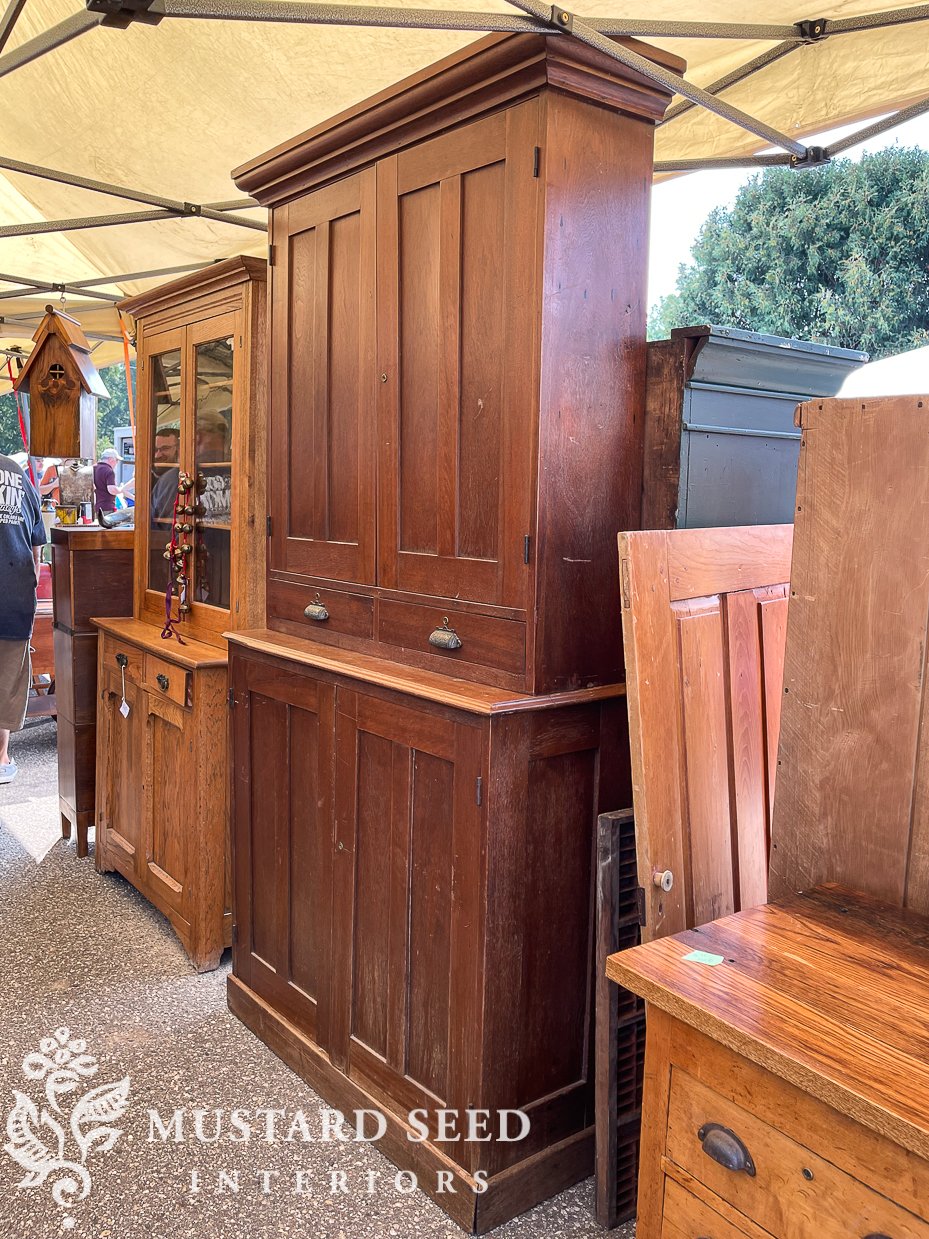 It is in super condition, but it is missing the key (which was also used as a handle to pull the doors open), so I’m going to add a couple of antique latches when I find the right pair.  It’ll also give it a little rub down with some Hemp Oil to hydrate the old wood.

First of all, let me say that I know not everyone is going to love the deer head and that’s okay.  I just imagined a deer head hanging up on the wall as I’ve been working on the basement.  This one is from the 1940s-50s, so there’s nothing that can be done to save it now. 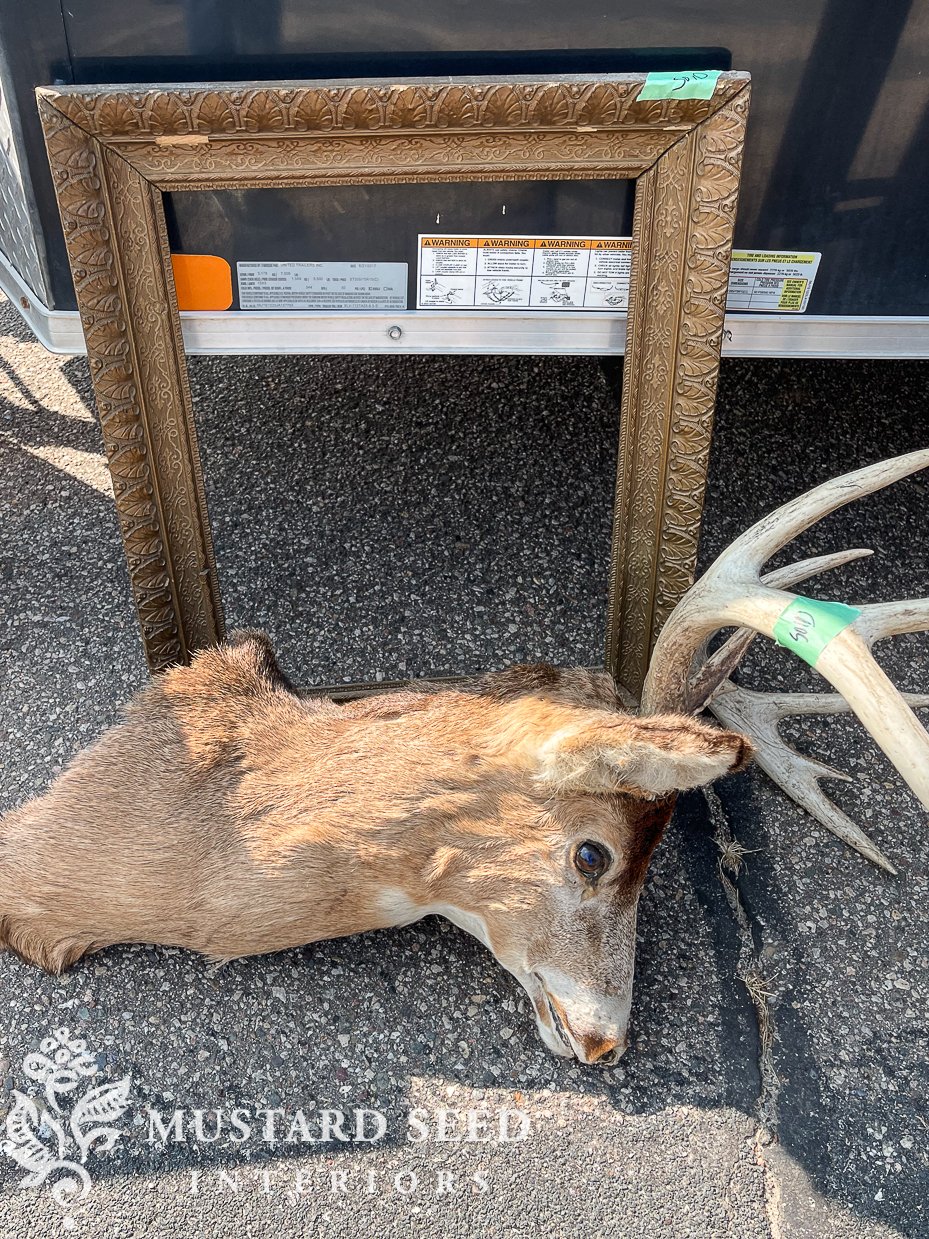 The gentleman I bought it from had several deer heads ranging from $50-$300.  Of course, the $300 head was the prettiest, but I really didn’t want to spend that much on it.  I thought the $50 one had a nice face, fluffy ears, and an impressive rack, but the nose was a little messed up.  It’s from the 1940s-50s and had a classic look, but was a little worn from age.  The seller mentioned fixing the nose, so I asked how he would do it.  He said he would make one out of epoxy and paint it black.  There happened to be some black leather on a table above the deer.  Hmmm…  I think I could probably fix the nose with a little black leather.  The gentleman agreed that was a great solution and offered to cut a piece off of the leather for me.

So, I’ll get this old boy fixed up and looking nice to hang in the basement.  He will need a name, so let me know if you have any suggestions.

As an aside,  I never thought I would be fixing the nose on a stuffed deer head as a DIY project!

One of my surprise purchases was a couple of starched detachable collars.  These were made in the late 1800s to early 1900s so a gentleman could just have his collar washed and not the entire shirt!  Isn’t that interesting?  I guess most of the shirt would be covered by a vest and coat, so the collar just had to look crisp and clean.  (Nevermind that the armpits were probably what needed to be cleaned the most!)

Anyway, I inquired about the collars and the seller said the entire display was $525, but everyone wanted to buy his cuffs and he wasn’t selling them seperately.  I let him know I was interested in the collars and he said he could sell those, no problem.  $6/each, but he would only sell me two.  So, I picked out two.  I’m planning on framing them in shadow boxes in the bathroom. 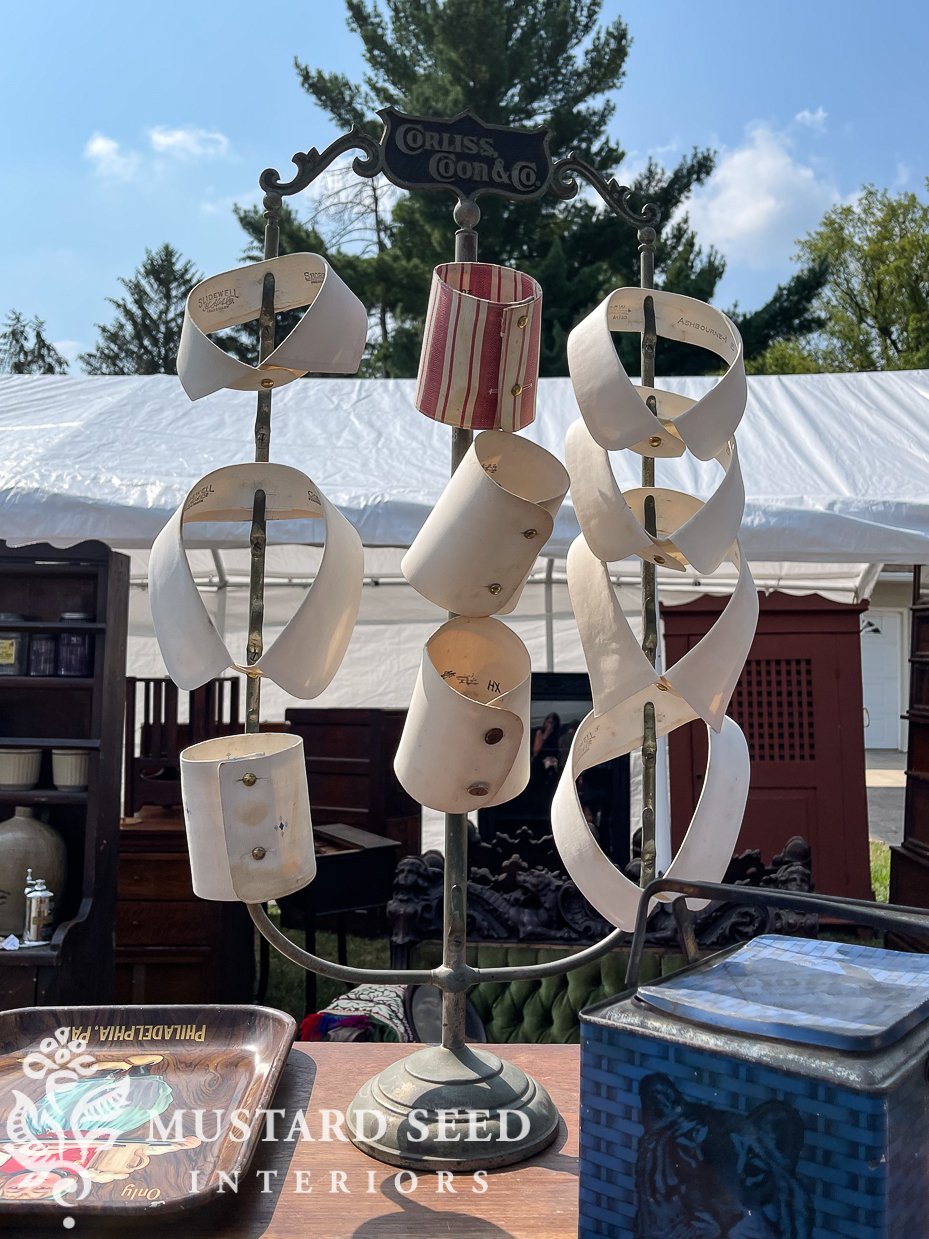 I told Cheri not to let me buy any baskets, but I managed to sneak one in as I was loading the cabinet in my van! I have bought a basket from this vendor at Gold Rush Days each year and I couldn’t resist this antique German basket with a lid and original hardware for $60. 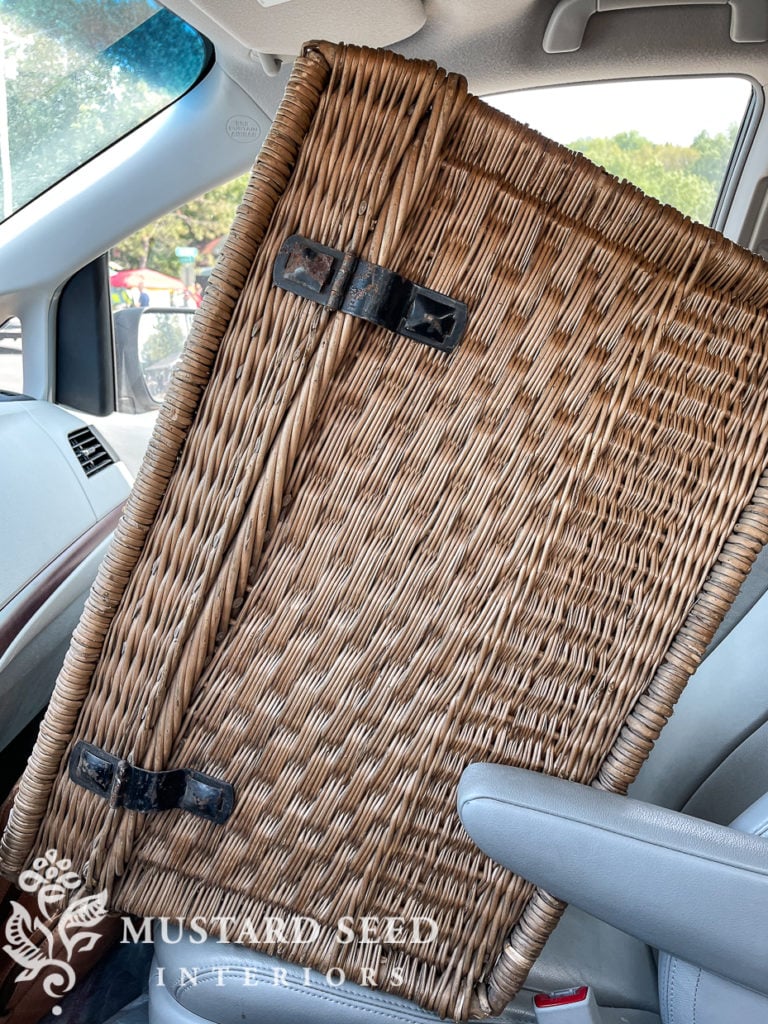 The next day, I was still feeling high off of my great finds and decided to go to the Gold Rush Days event in Rochester.  Since this one is at the fairground, there were vendors outside, but also in the barns and buildings.  Because there were more vendors set up indoors, I think there were some higher-end pieces at the Rochester venue. 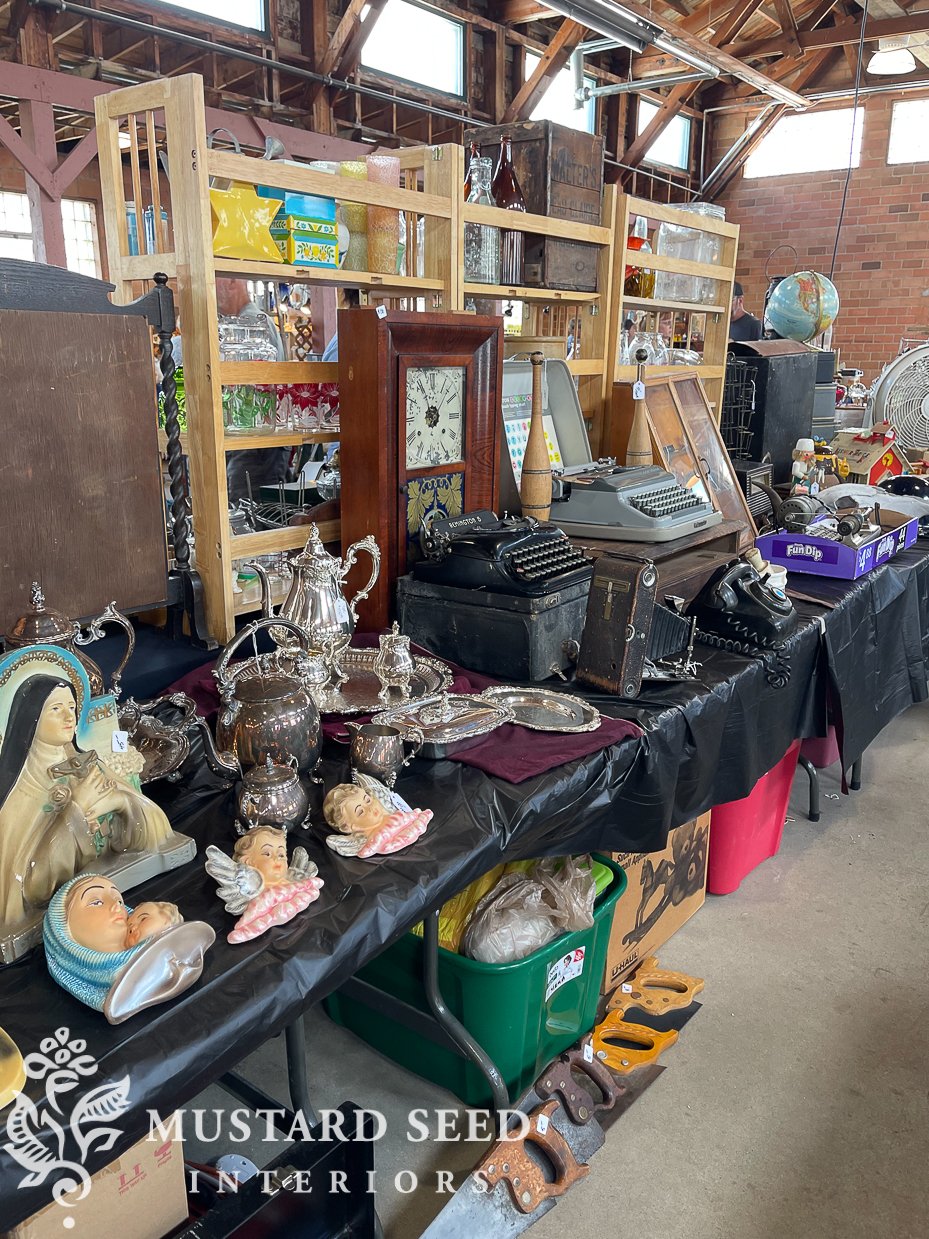 There seemed to be more antiques from Europe at this event as well.  Of course, that is what I was drawn to the most, but the prices were high as well as the quality.  So, I did a lot of admiring. 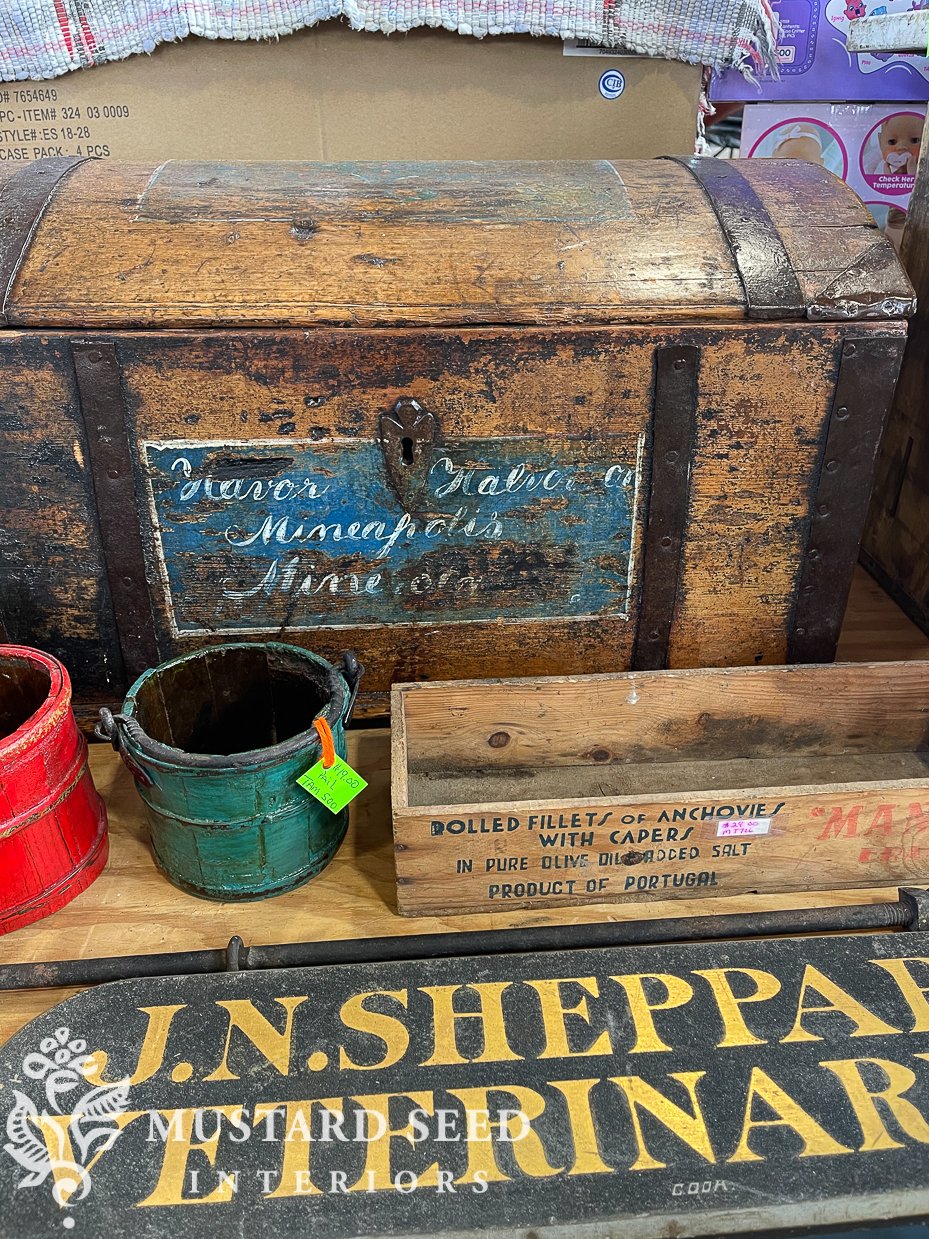 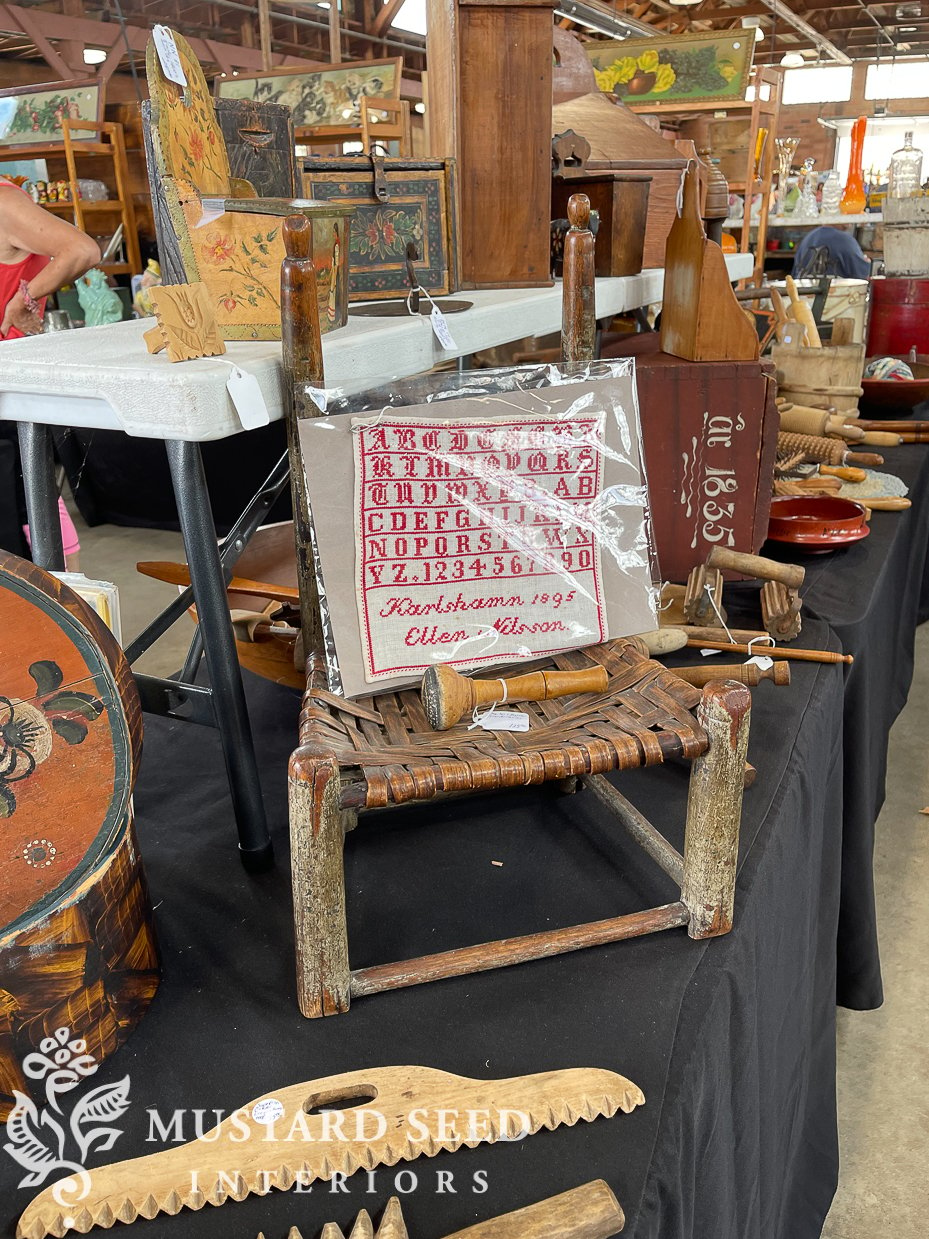 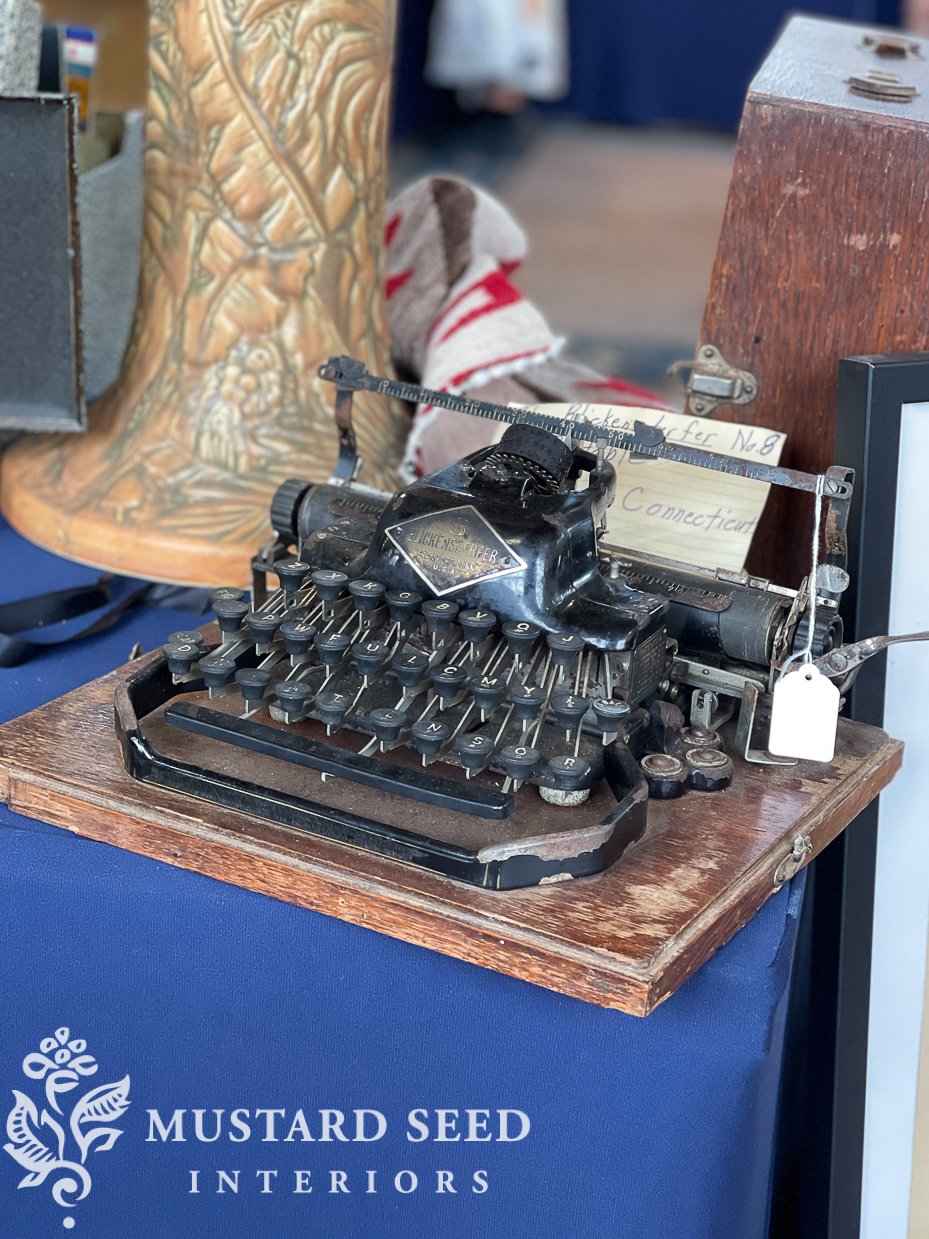 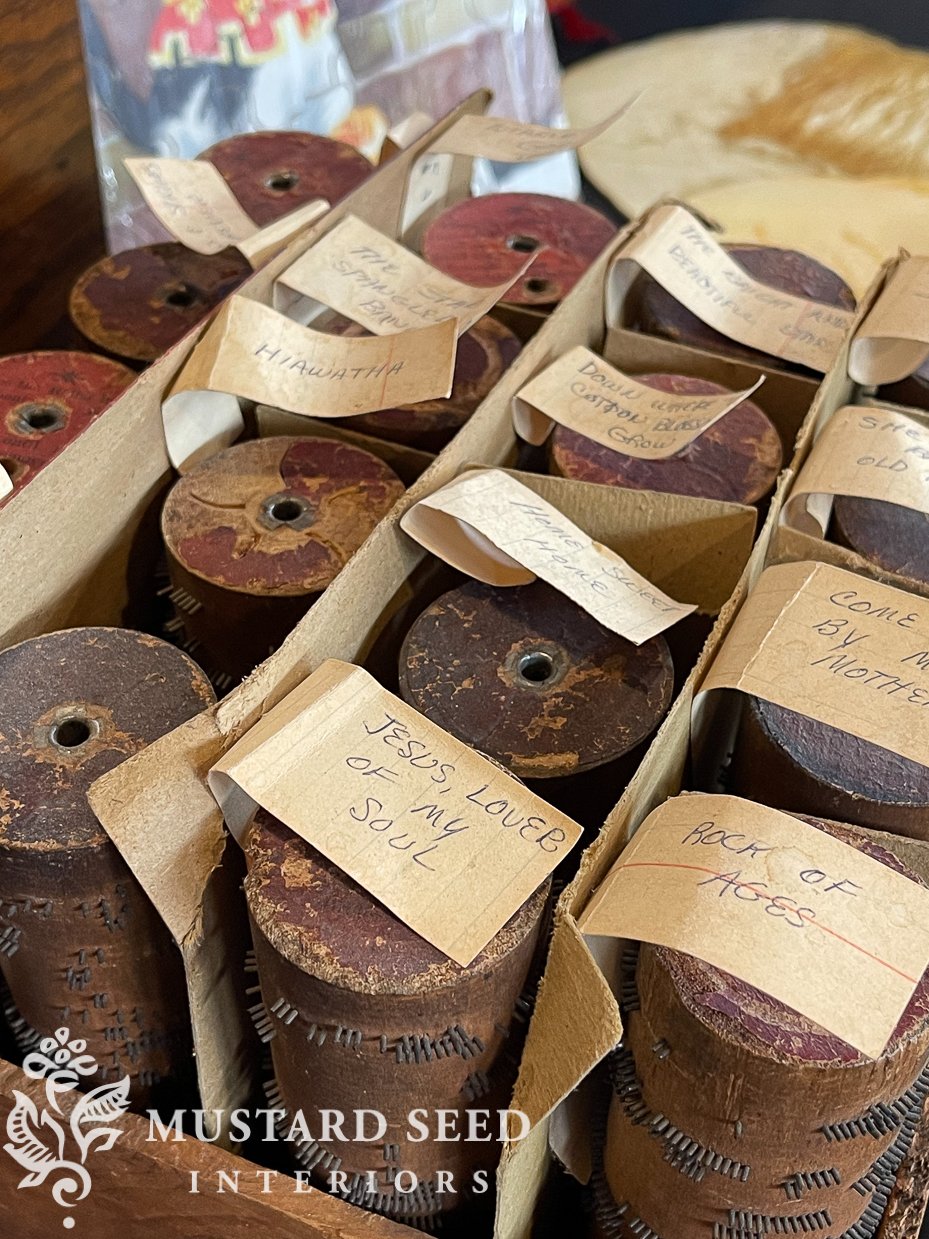 The antique hand-painted bench was spectacular!  It was over $3,000, but it is a genuine antique and a very special piece, so it’s probably worth that. 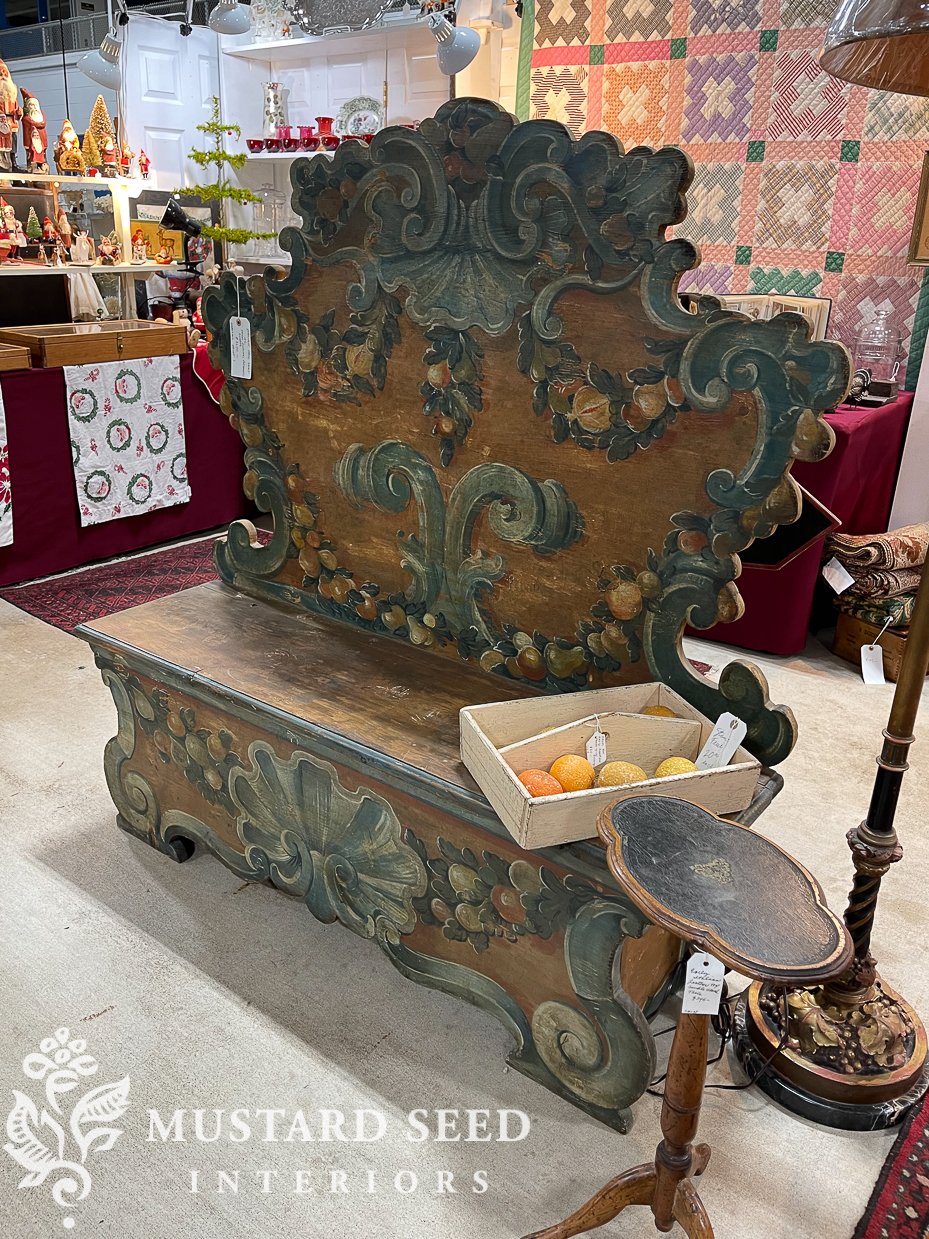 I took pictures so I could use the painted detail and colors for inspiration. 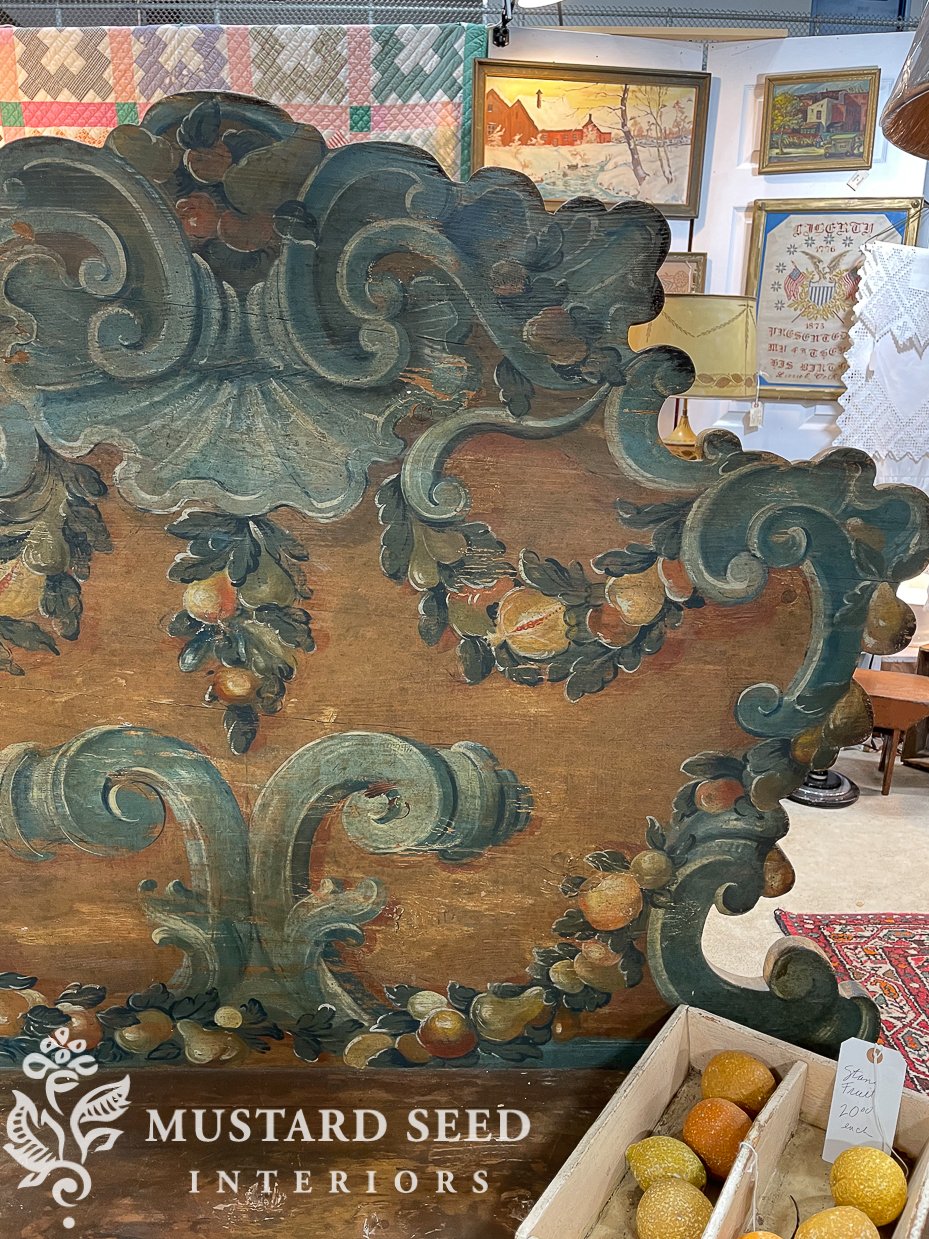 I also loved this pine wardrobe.  If it had been a steal, I would’ve bought it and found a place to put it, but it was priced pretty high. 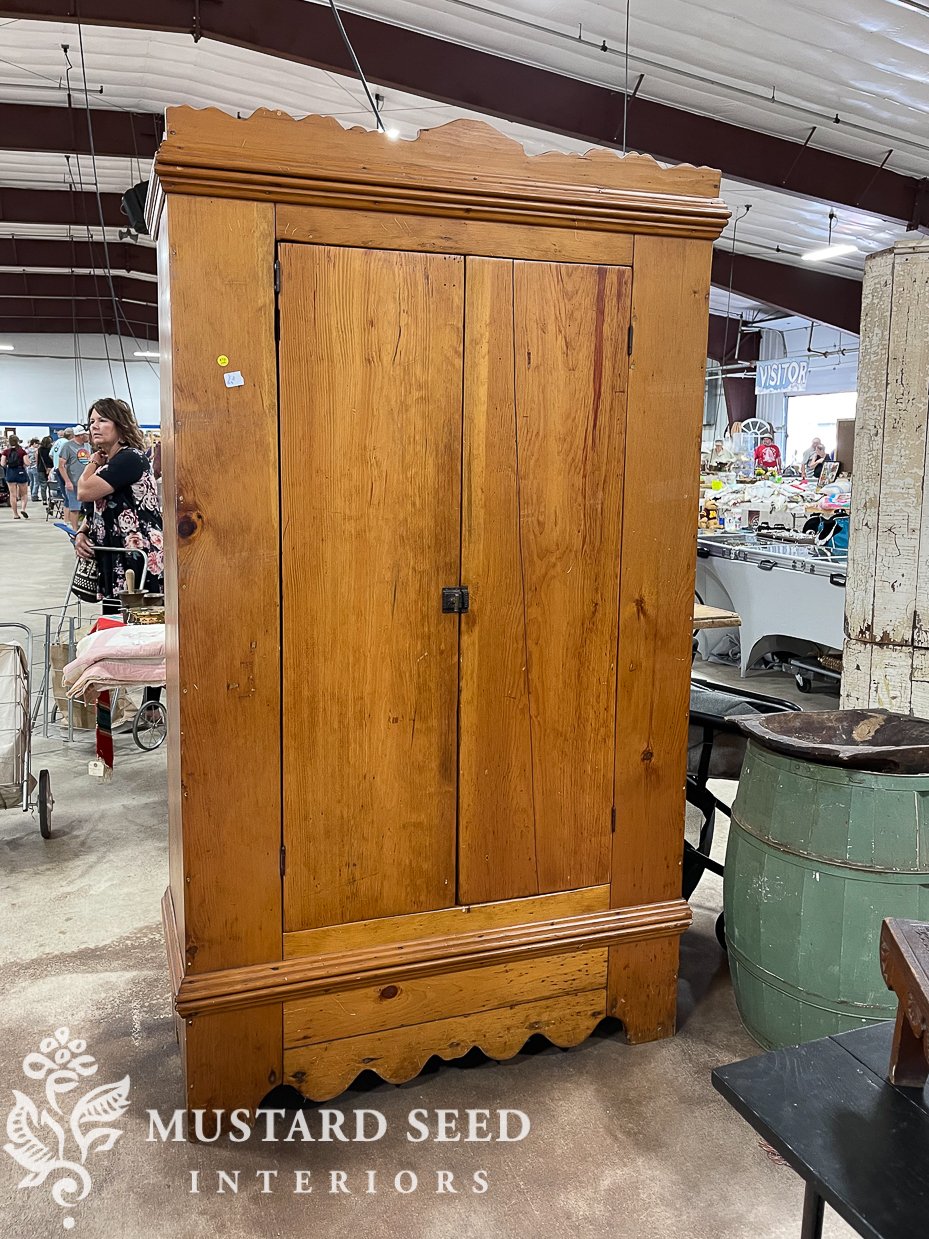 I also loved this seed cabinet!  It was in incredible condition and would be a perfect piece to build a kitchen around or to use as a storage piece in a studio.  My studio is about maxed out, though! 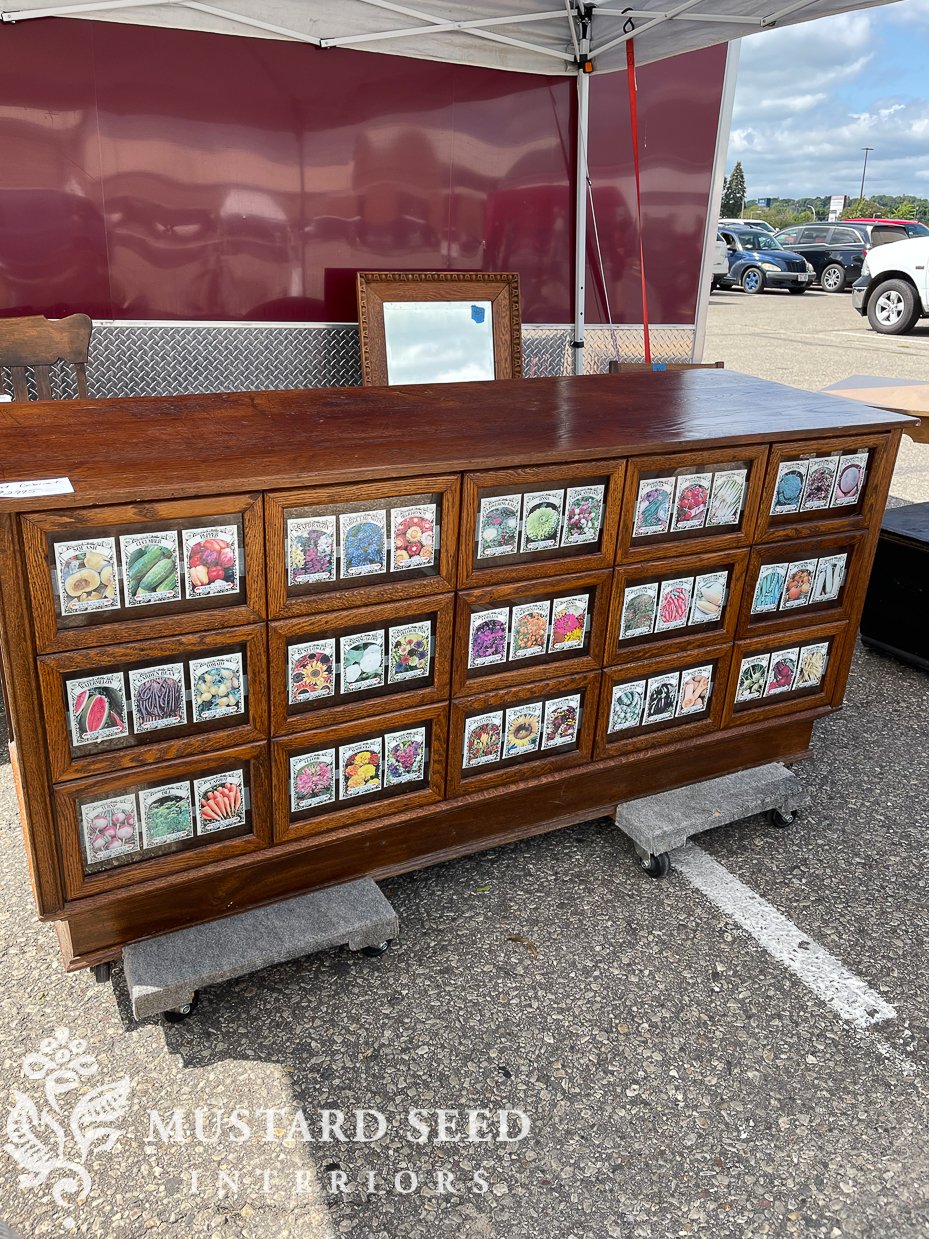 I was very tempted to buy this rug! 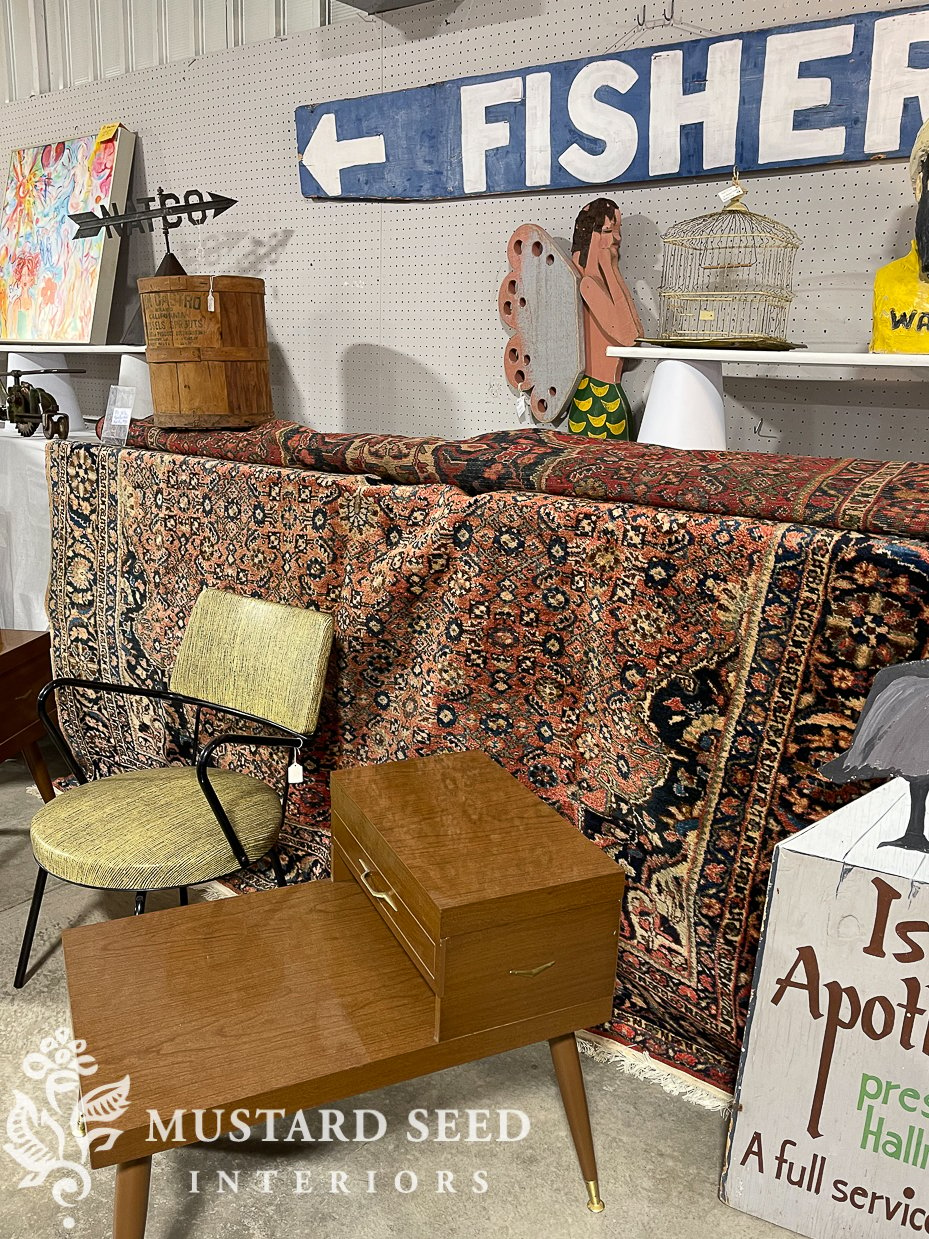 The colors were soft and beautiful and it would look great in either my living room or family room.  Even though it was a good price, it was a bit more than I wanted to spend and, since I have rugs in both rooms already, it was hard to justify the purchase.

I did buy a few small things, though.  The ceramic pastry cutter… 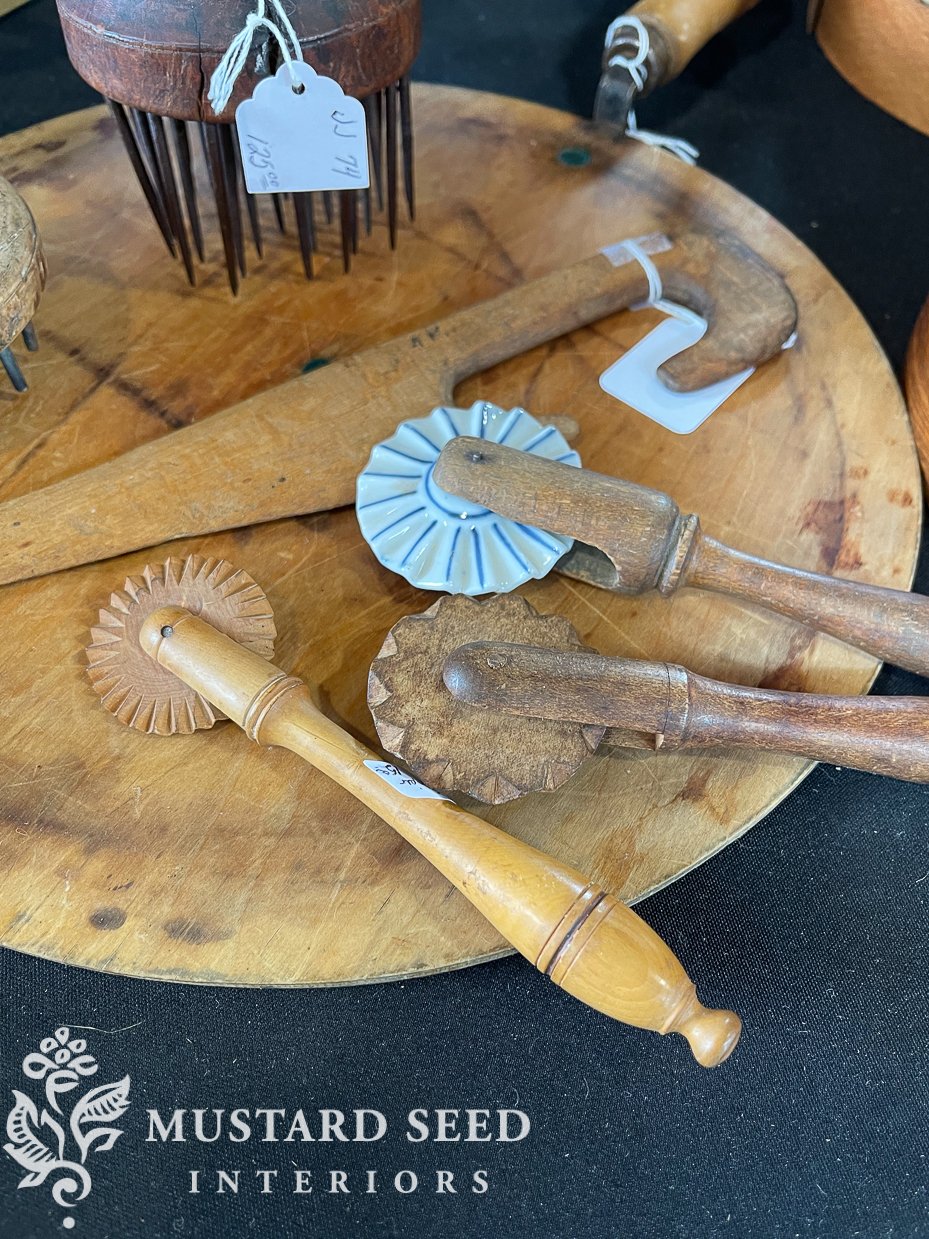 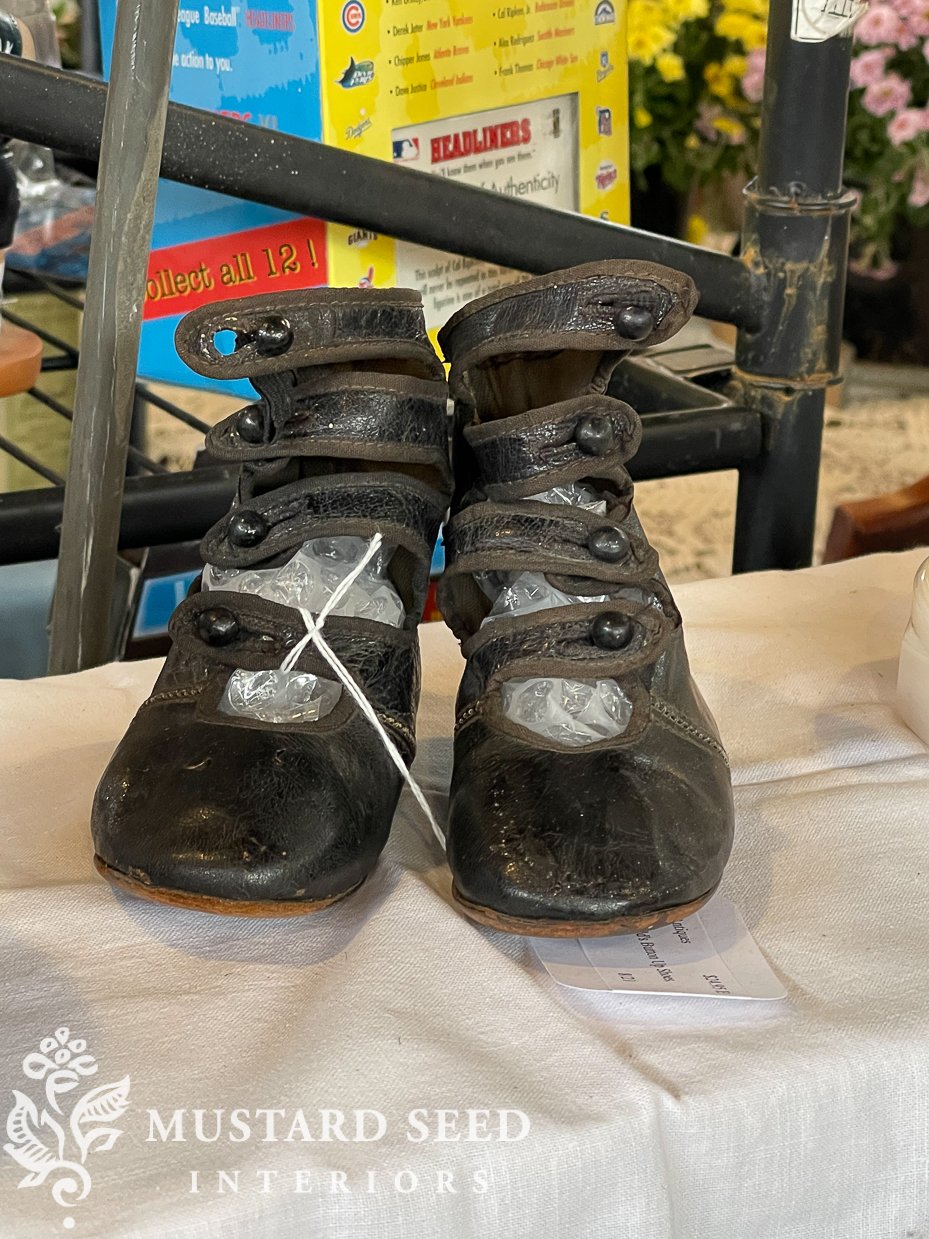 A couple of books, and a few other little things.  I’ll share them all in another post!

While it was fun to be out shopping for antiques and awesome to find a few pieces on my list, the highlight of both days was having conversations with some of the vendors.  I heard stories about collections of WWII letters, fountain pens, carved wooden spoons, and more.  I especially like talking to the older vendors who have been doing this forever.  I enjoy hearing about their passions and why they collect and sell the things they do.  I have found most people are eager to share and teach me something I didn’t know.

After hanging out in the house for the better part of a year, it was nice to connect with others, even in just a quick chat about antiques.

I’m already looking forward to Gold Rush Days next year!  It’s always the third weekend in August if you want to try to attend.