I was going to share all of my Gold Rush Days finds in one post, but when I started editing the photos, I realized that would be a pretty long post.  It’s not that I bought so much stuff, but each piece has a story with it and different aspects of it to show.  I didn’t want to rush through it, so I’m going to break up what I purchased into a few posts.  Today, I’m going to share some antique papers and books I found.

One booth was curated by a woman who obviously appreciated old letters, photos, albums, etc.  I lingered there for quite a while, picking through the boxes and flipping through books.  She was selling several bundles of letters for $10/each, tied up in a light blue ribbon.  Let me just acknowledge that I do not need any more old pieces of paper or people to research, but I just couldn’t help picking up one bundle.  You just never know what’s going to be in those envelopes.

Well, my instinct paid off.  What I thought would be a bundle of letters from the 1930s and 40s (based on the postmarks I could see) about mundane daily activities ended up being a lot more interesting. 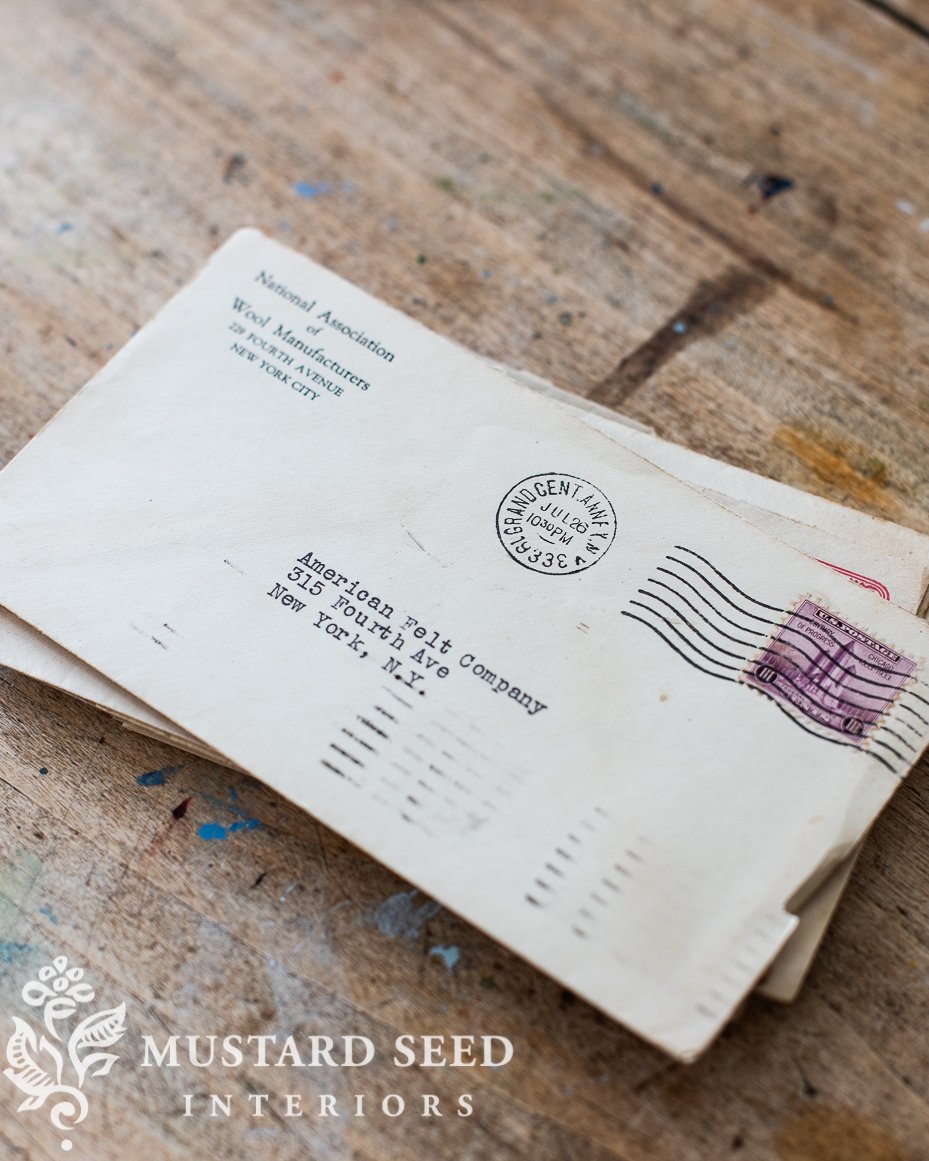 The first envelope held three calling cards from the mid-1800s, something I’ve actually been browsing for online!  I haven’t bought any, because they can be pretty pricey for one small piece of paper.  I figured the contents of the first envelope were likely a fluke, but the second one yielded a beautiful invitation.  Each envelope, in fact, contained something interesting – a receipt, a recipe, a letter from Italy… 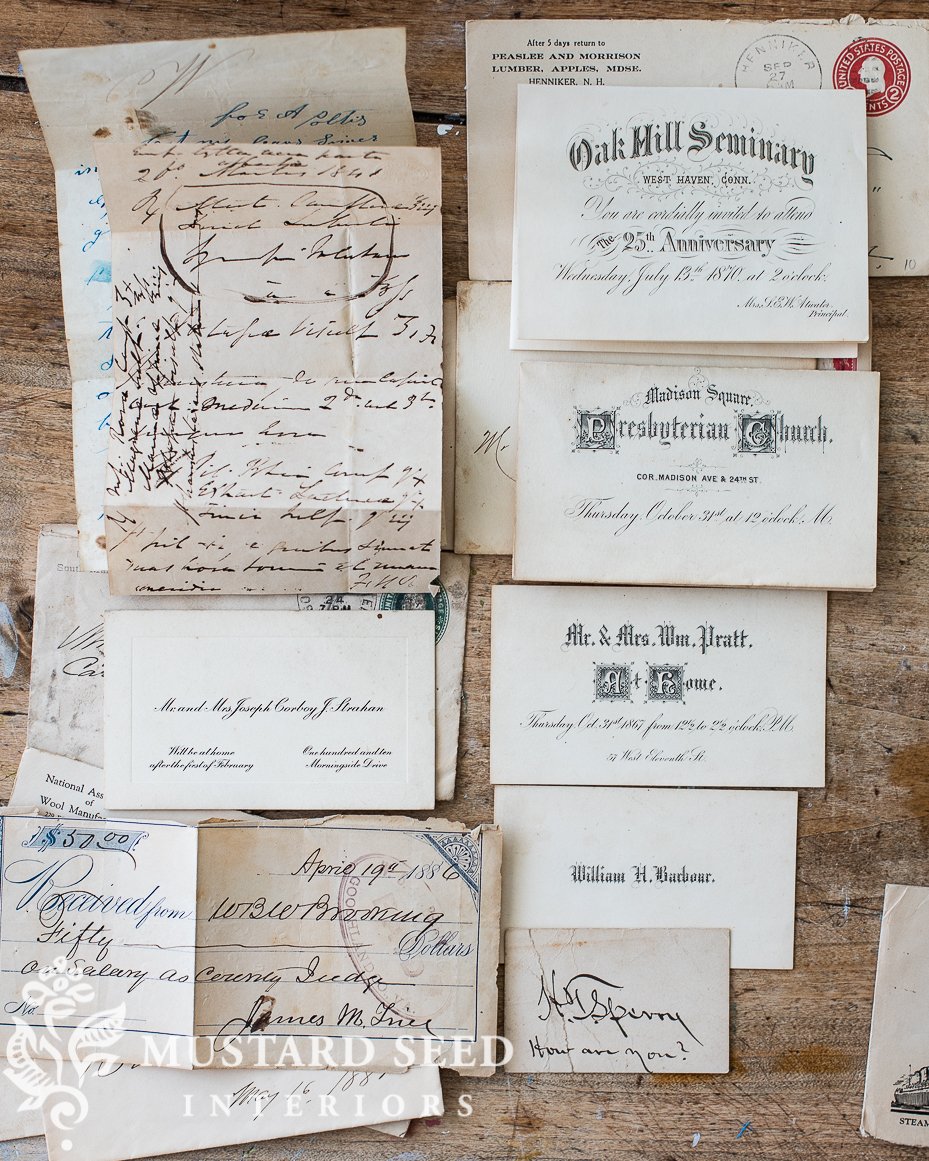 The calling cards are definitely my favorite.  I am planning on framing them. 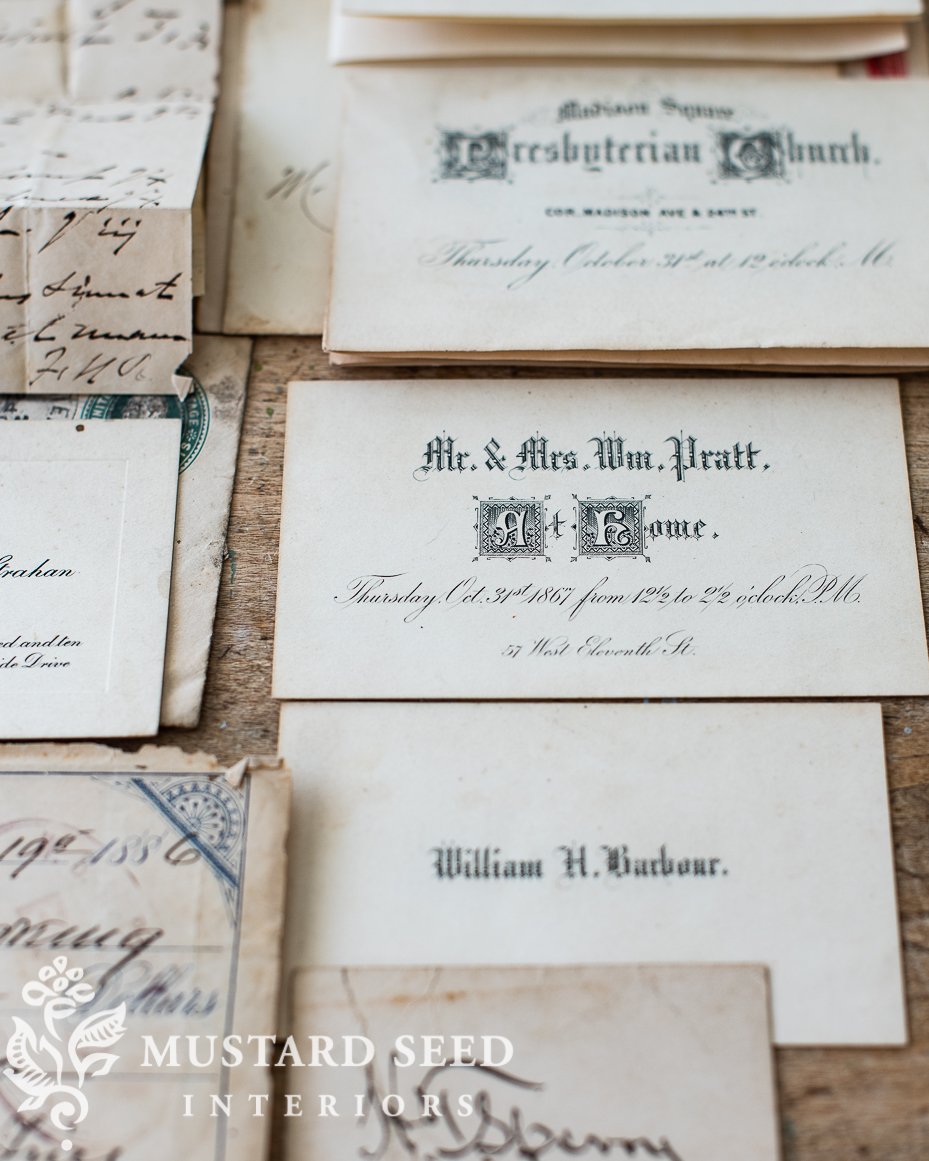 The invitations are so beautiful, too… 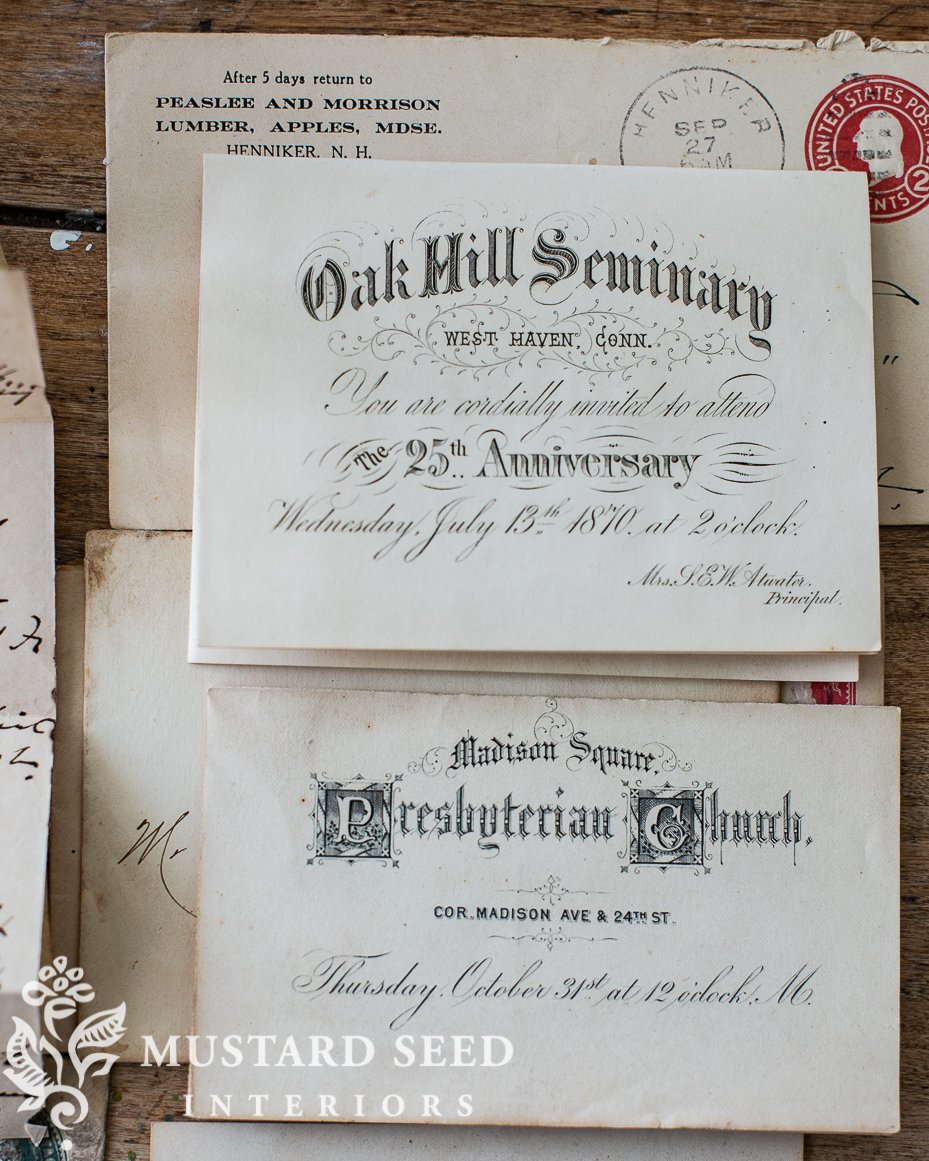 This letter is from 1841, but I haven’t been able to make out any of the words.  The writing is so messy!  It looks like it could be a list of items…?  I’ll have to study it a bit more carefully to see if I can figure anything out. 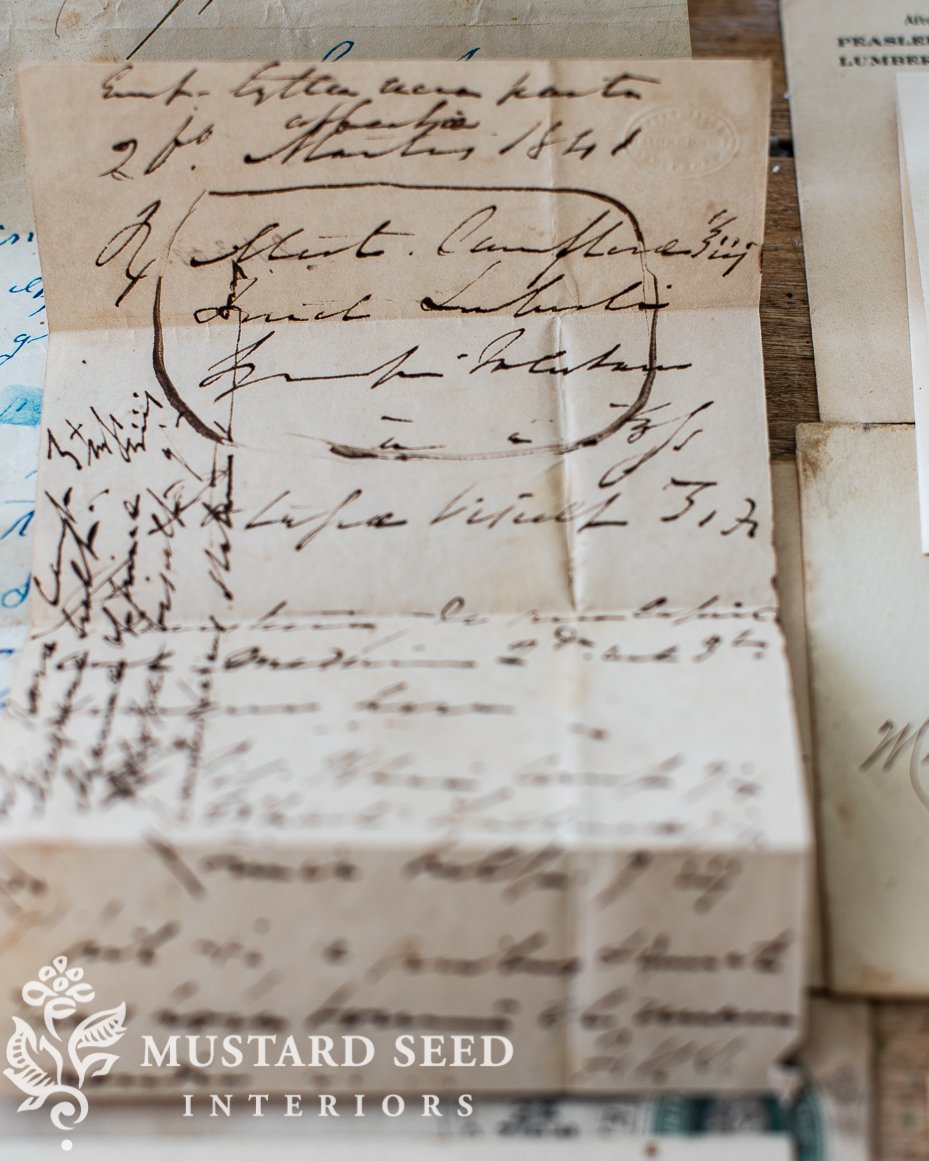 Some of the envelopes are from the mid-1800s as well, but I’m not sure why some of these items were in envelopes posted in the 1930s and 40s.  Well, this mystery was to my advantage.  I got some truly special pieces of ephemera. 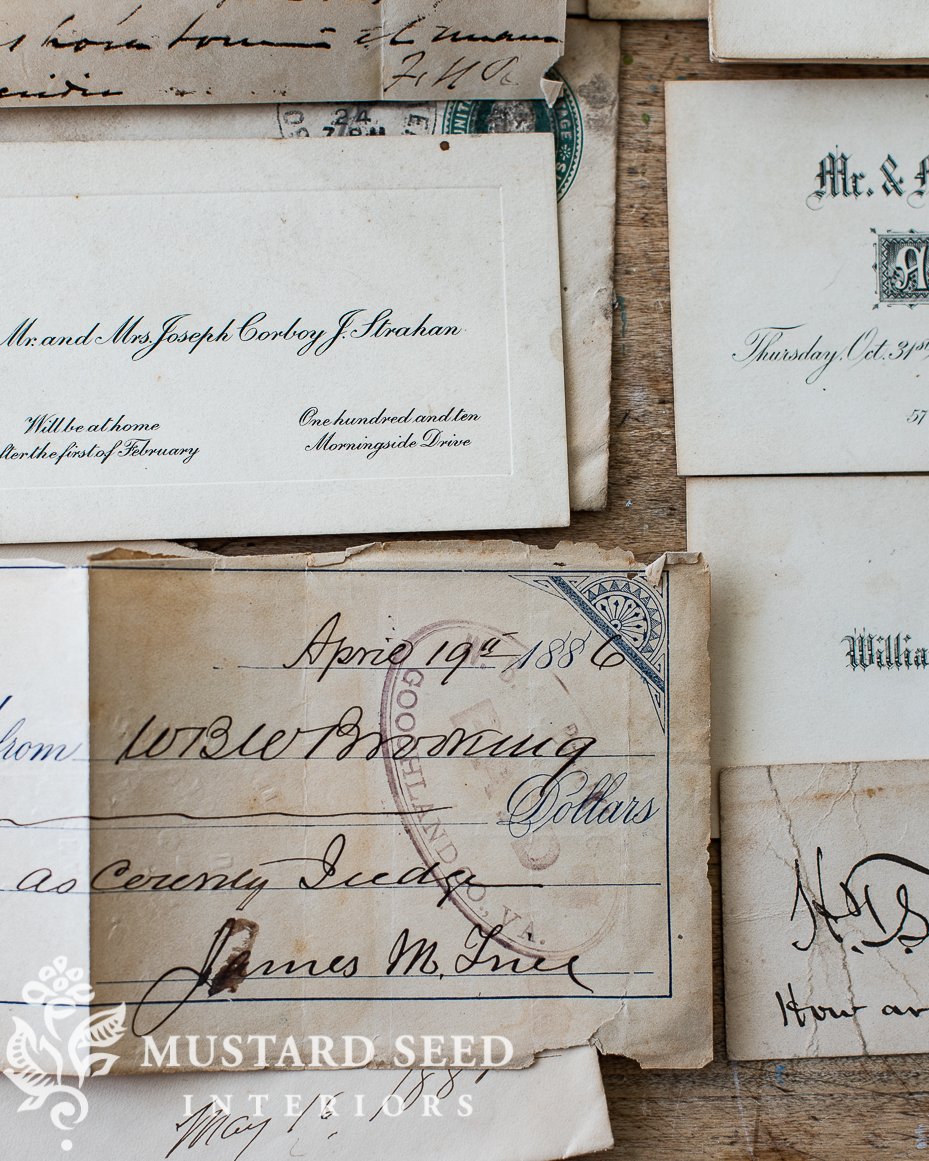 I thought this one was a letter, but after looking at it a bit more carefully, I realized it’s a recipe… 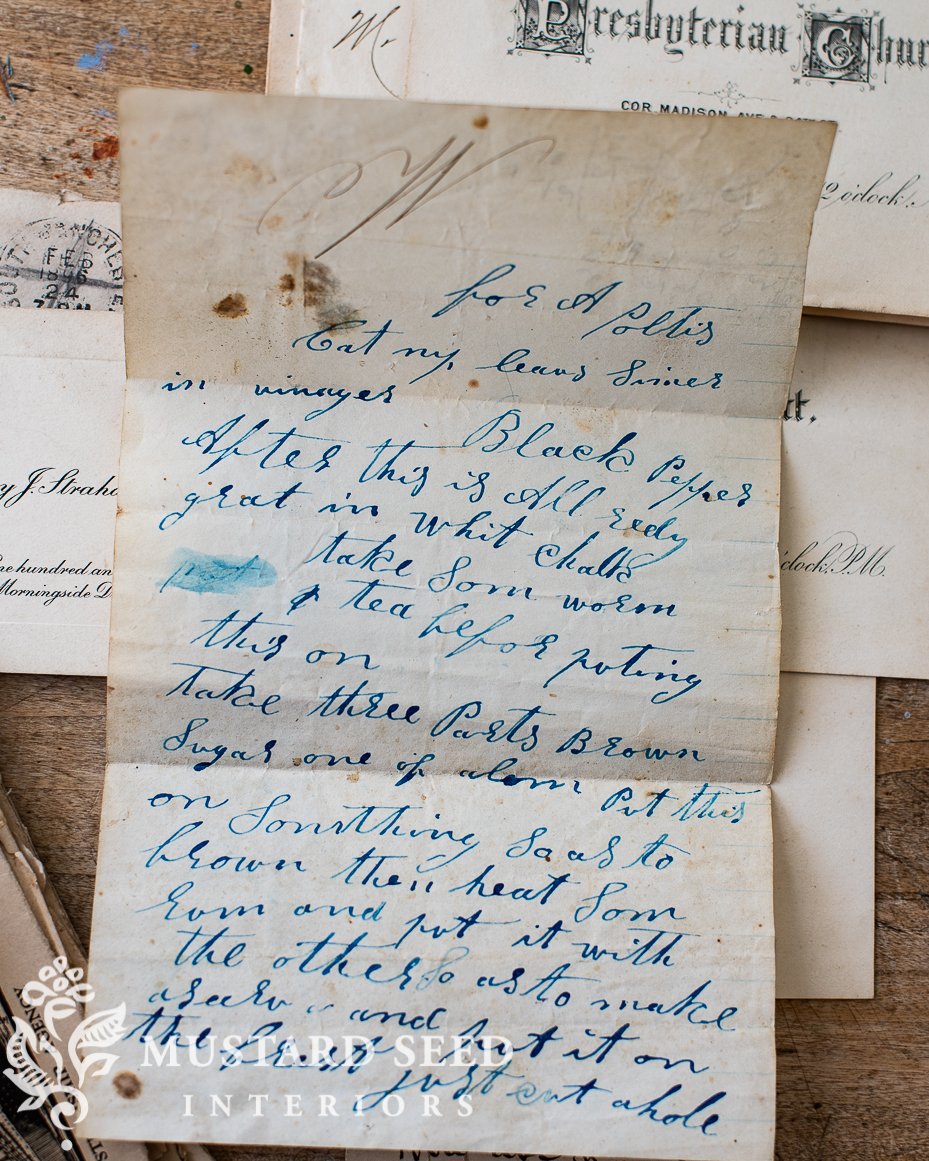 I have no idea what kind of recipe this is.  It looks like it could say “poltis” (poultice) at the top, but it does say to “eat whole.”  At the bottom.  This recipe seems to contain beans, vinegar, white chalk, black pepper, tea, brown sugar, and rum!  Any ideas?  Whatever it is, I love the handwriting and the misspellings.  There is something endearing about it.

My Instagram followers helped me identify the following letter as Italian.  I recently learned that letters written on stationery with black borders mean the writer is in mourning.  Isn’t that interesting? 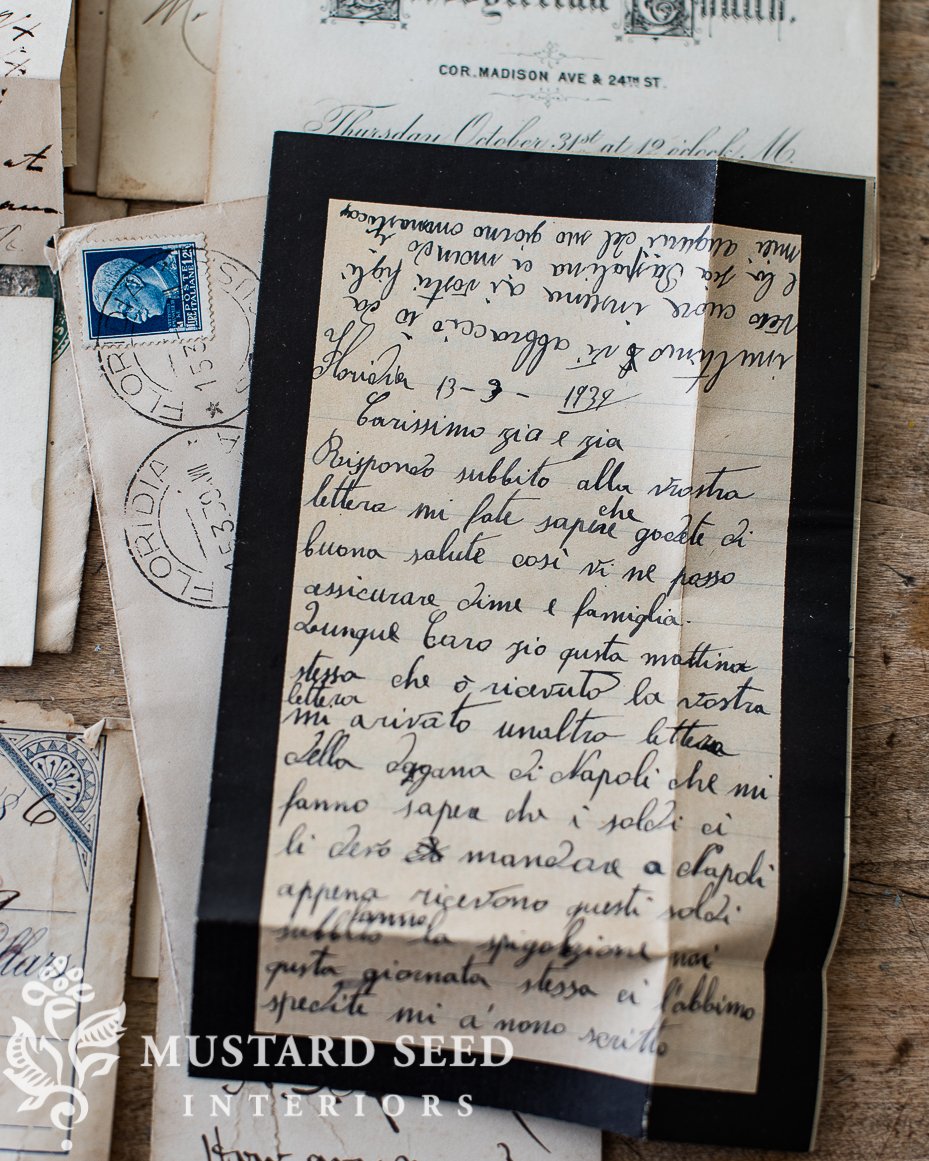 I also bought an autograph album from the 1930s and 40s for $20.  I was sort of hoping it was blank because it would make a lovely little sketchbook, but the contents are special 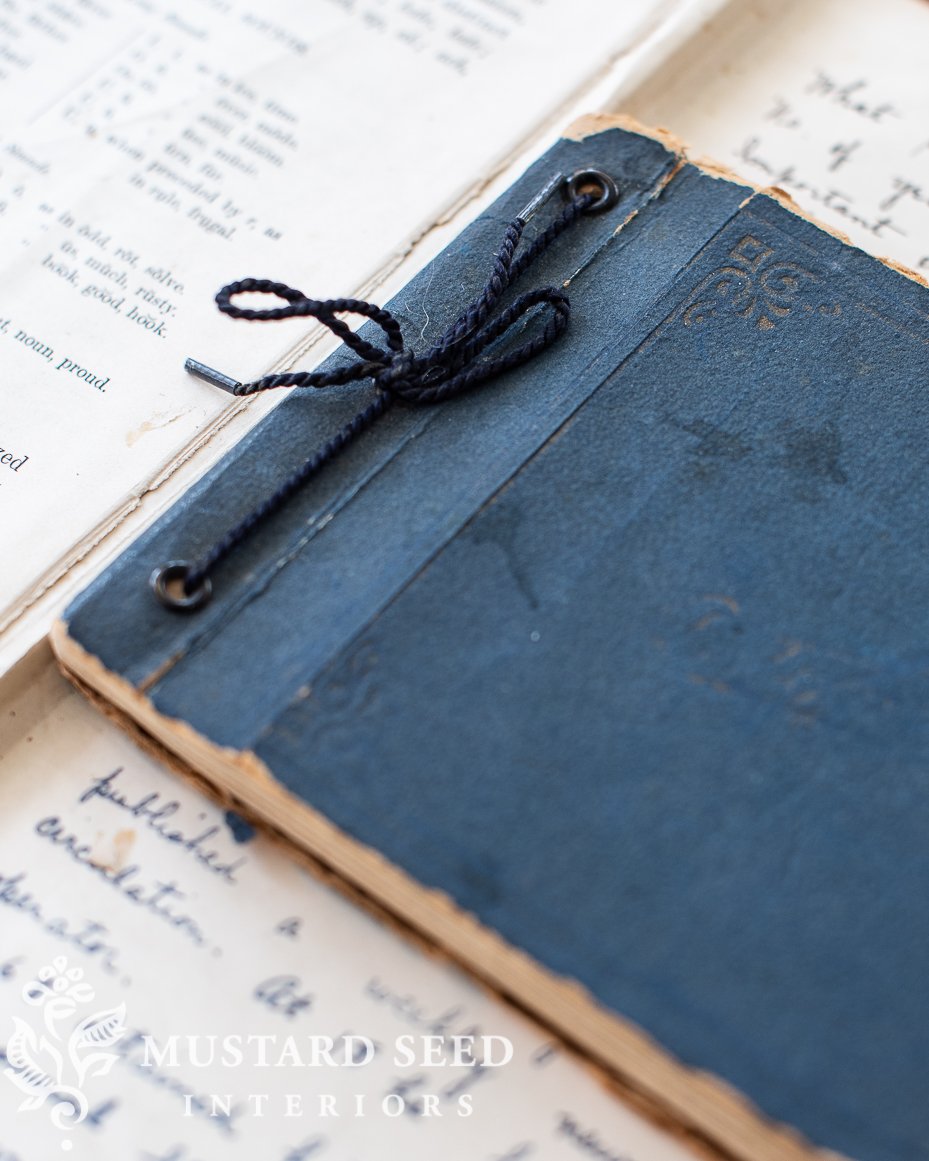 It is completely full (most pages front and back) with notes of encouragement to a woman named Katherine/Catherine/Kay.  (It’s like my yearbooks to Marian/Marianne/Marion.)  The notes span from 1934 to about 1940, but the entries are not chronological, so I might be missing some dates.  Most of the quotes, poems, and verses are either directly from the Bible or have a Christian message. 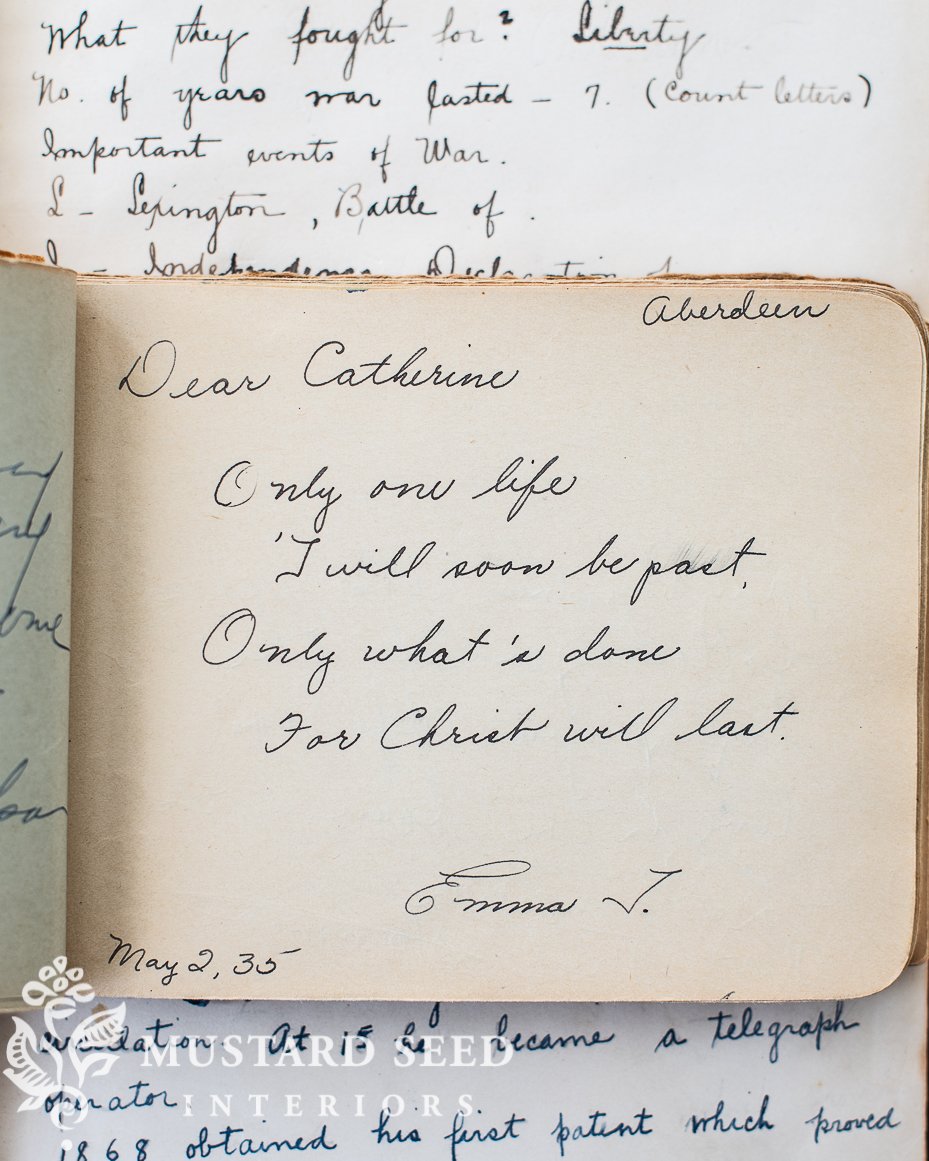 There are entries in California, Idaho, and even my husband’s alma mater – Moody Bible Institute in Chicago! 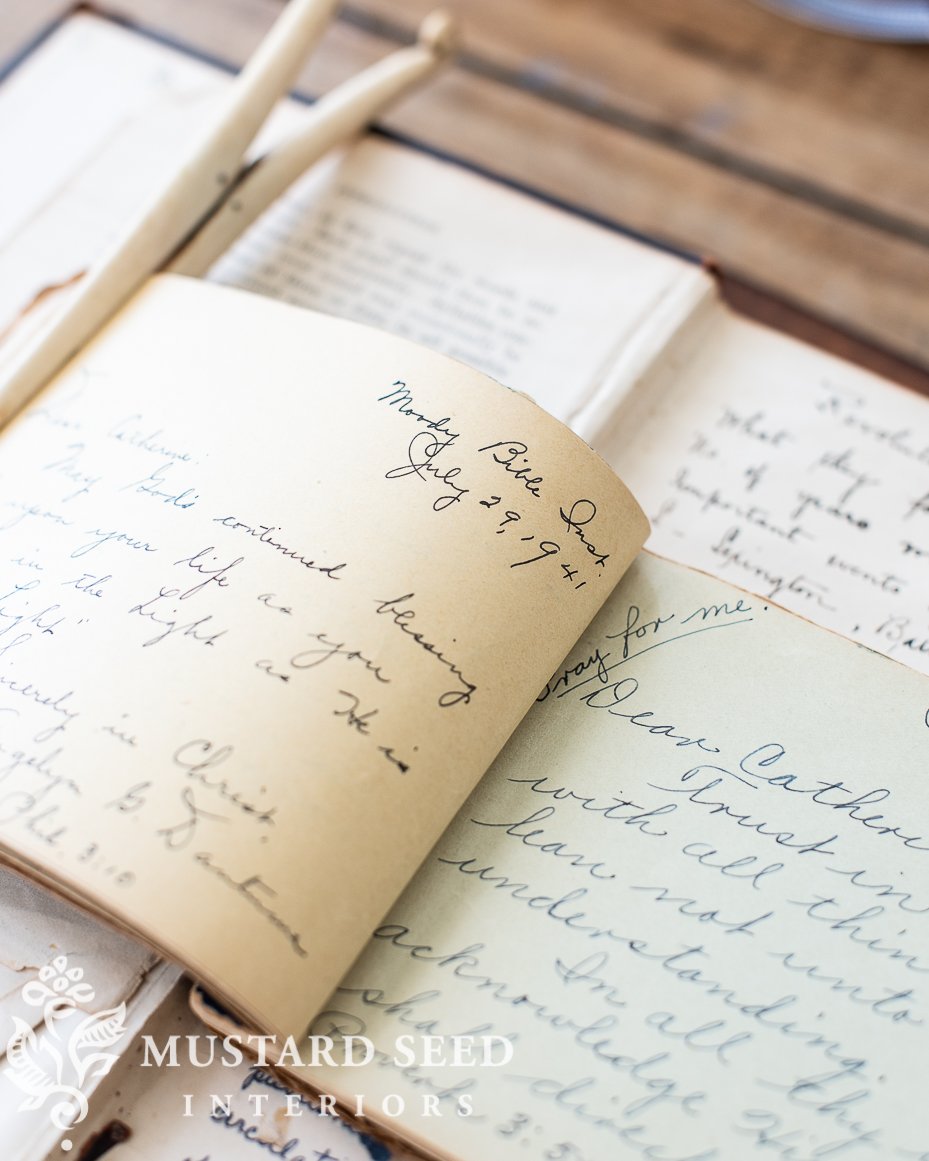 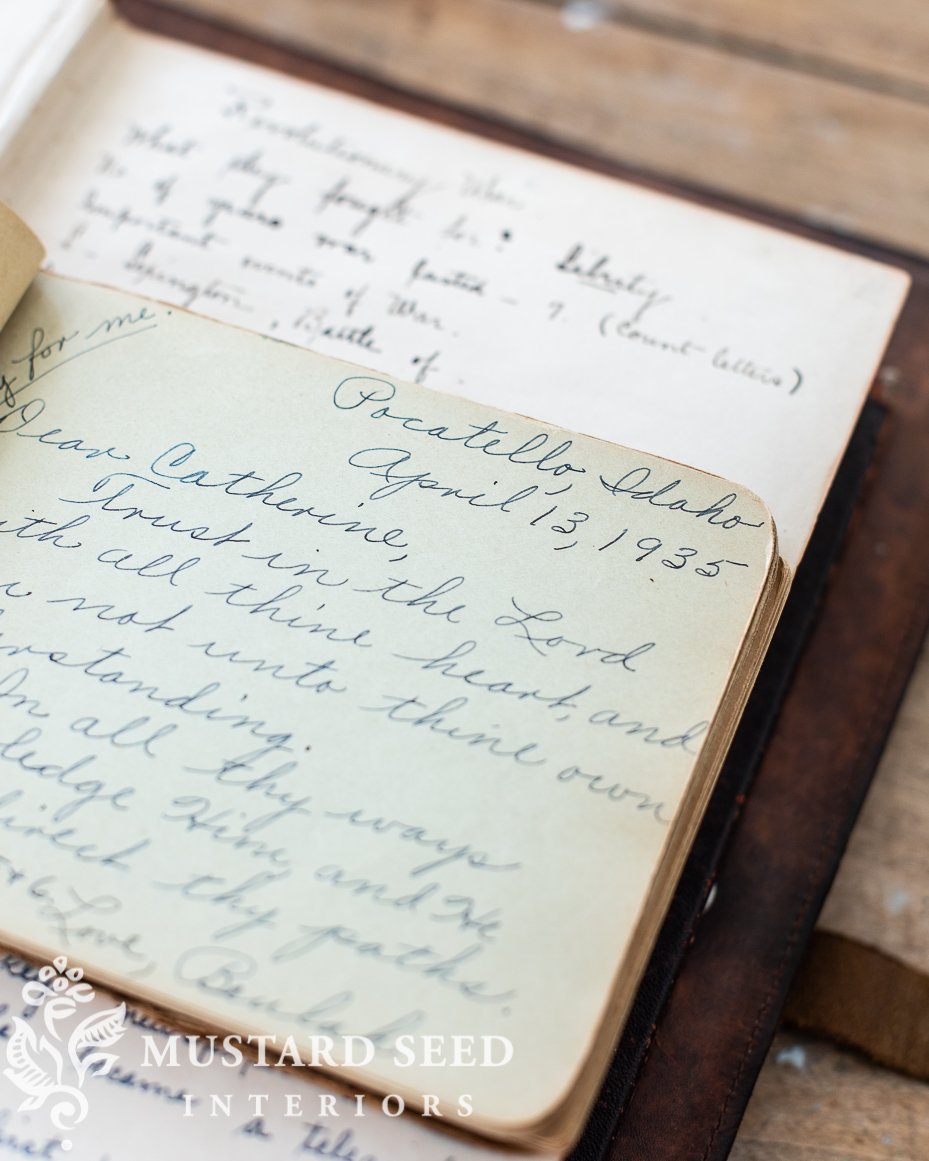 I have enjoyed reading through this book even more than I thought.  Words that were encouraging and uplifting almost 100 years ago still carry the same weight today.  We live in a tough, uncertain time, but when I think about what was happening in the world during the late 1930s and early 1940s, there was great hardship and uncertainty as well.  Likely more than I’ll ever understand. 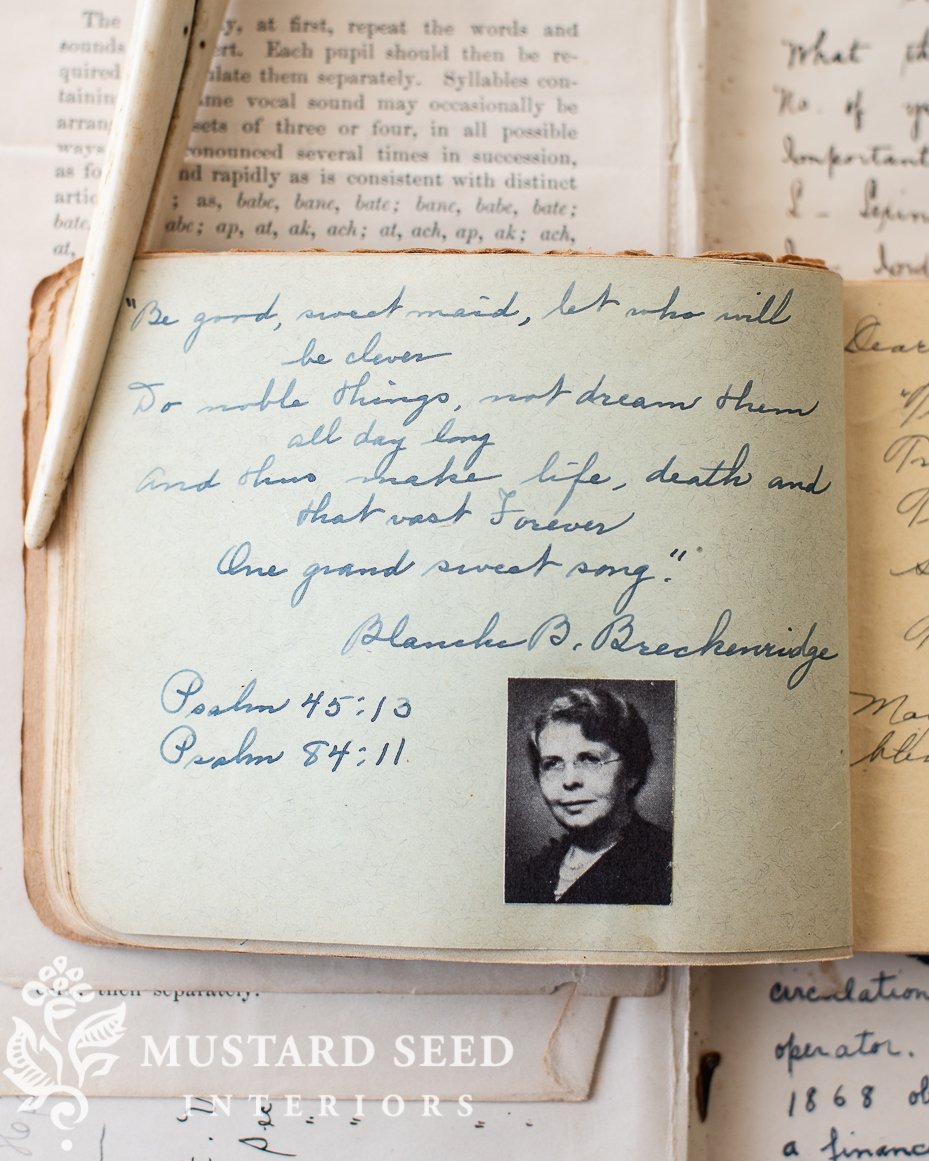 This entry made me smile because the handwriting reminded me of my Opa’s writing in his final years.  He never had great penmanship, but his writing became shaky as he got older and looked very similar to this.  You can tell letters were written slowly and more deliberately, with a trembling hand. 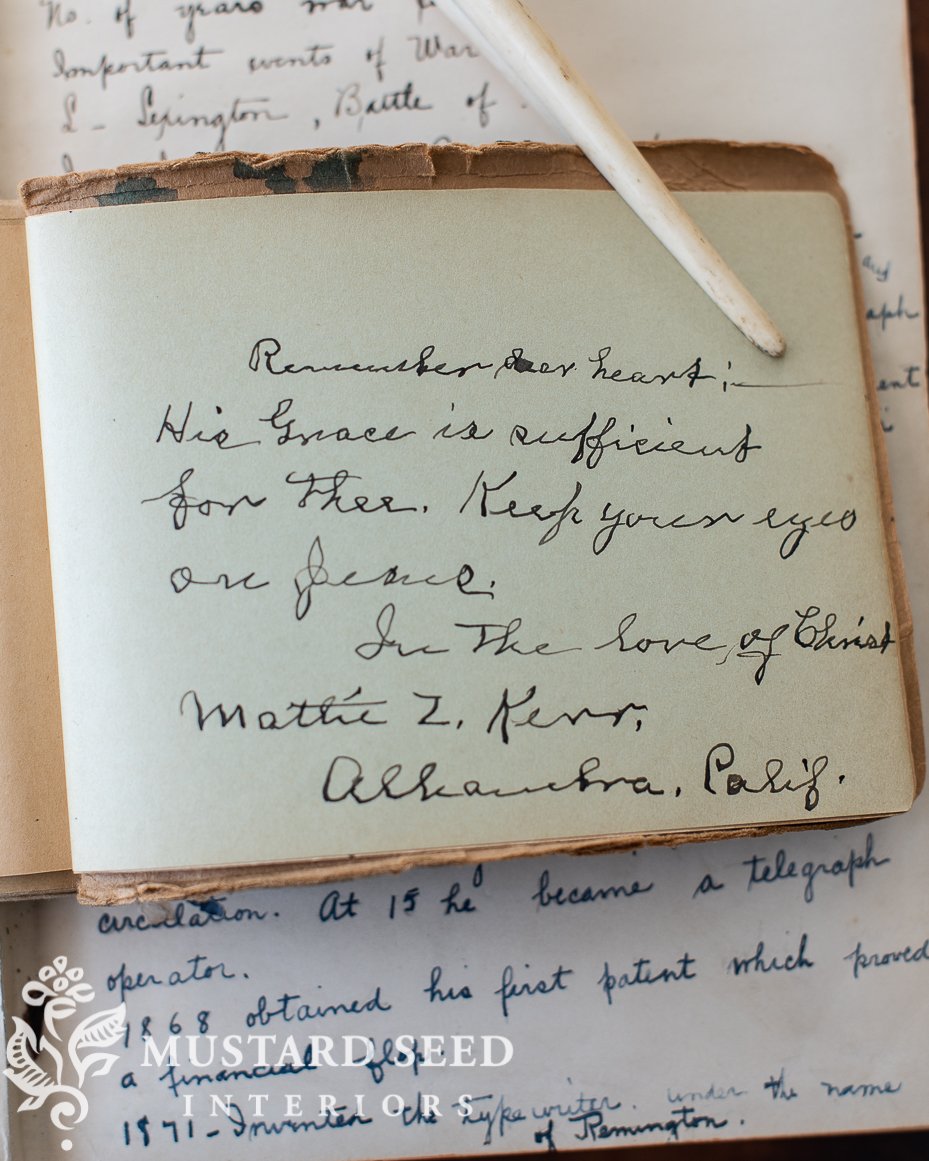 I don’t know what I’ll do with this book, but for now, I’m really enjoying the encouragement from it.

I also found a sketchbook for $25!  Actually, Cheri is the one who spotted it and pointed it out to me.  The first few drawings weren’t much more than scribbles with a ballpoint pen, but some of the sketches are quite nice. 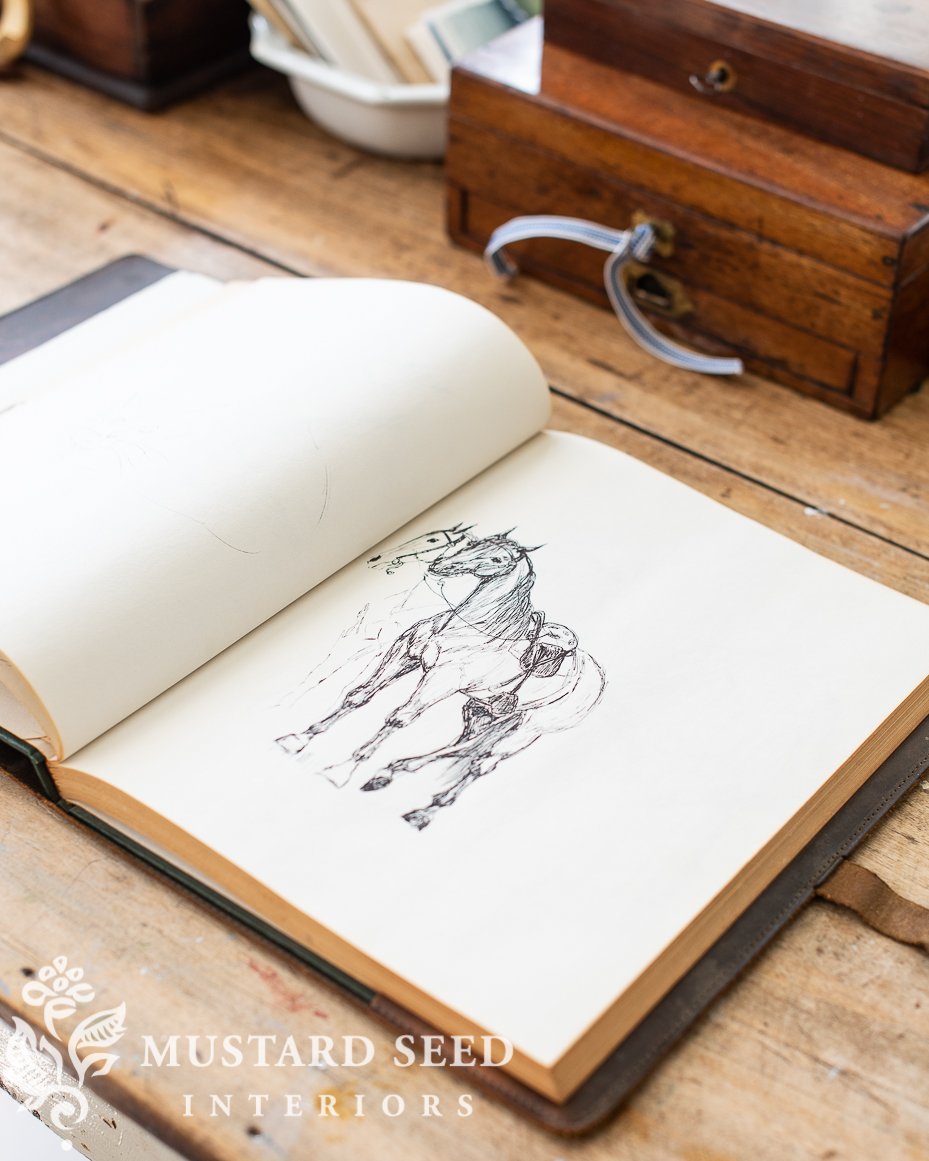 There is no writing in the book at all, so I have no idea if this belonged to a man or a woman and when it was bought or used.  While the leather cover with a sailing ship embossed on it has a masculine look about it, the drawings make me think this belonged to a teenage girl.  Maybe not, but that’s the vibe I get.  The sketches are mostly of horses and a few costumes.  I believe they are costumes instead of daily outfits because of the ballpoint pen drawings.  The ballpoint pen was invented in the 1880s, but it wasn’t widely used or affordable until almost 1960.   The sketchbook has some age to it, but I’m guessing it’s not any older than the 1960s and it might be more modern than that. 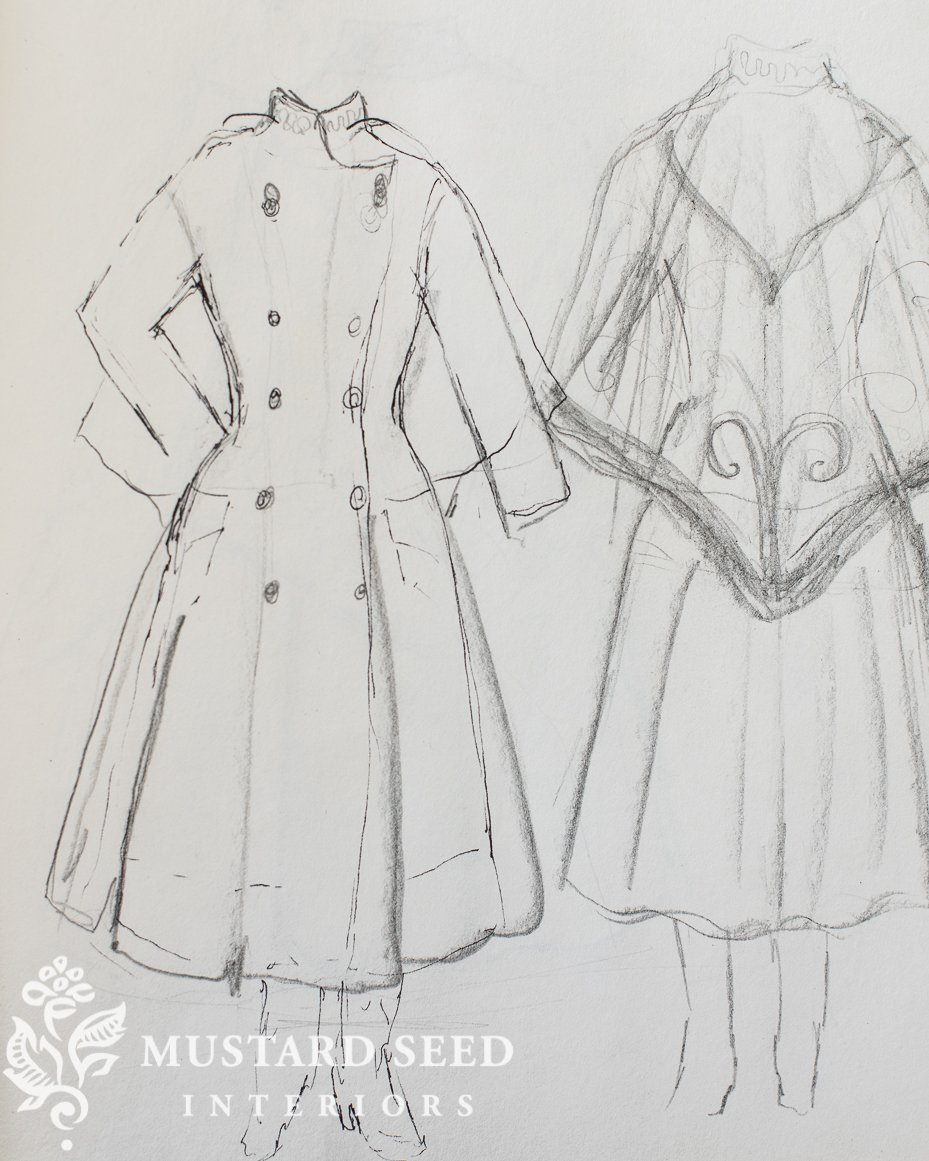 I am going to tear out the scribbled pages, but I’ll leave a few of the nicer sketches in the book and make little notes about them before I add my art to the blank pages.  It’s about 75% blank and it’s a nice paper that has yellowed a bit with age, so I’m excited about using it. 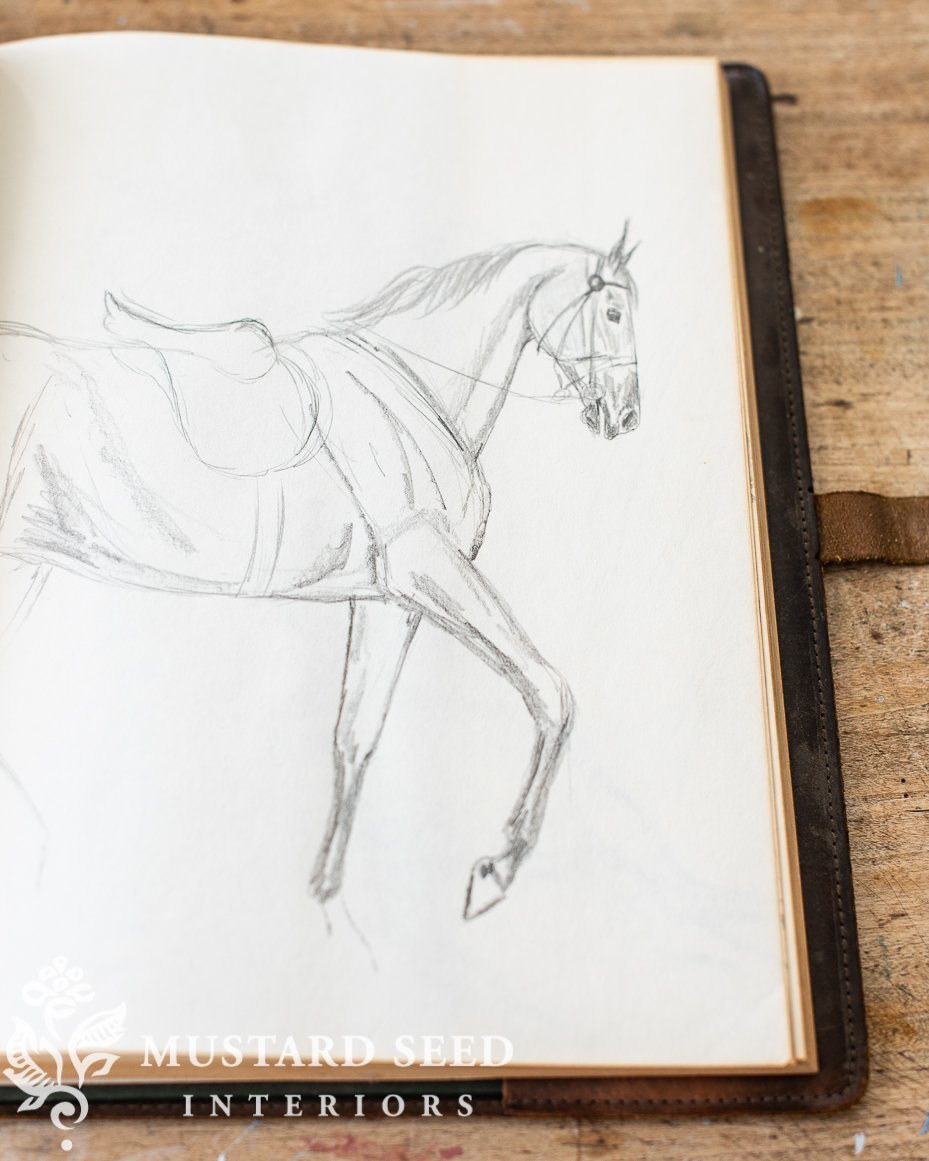 I bought this antique book (printed in 1905), The Century Book of Facts, for $10.  Leather-bound books were on my list to use in the basement, but this was the only one I found!  Well, I did find a few more, but they were incredibly expensive. 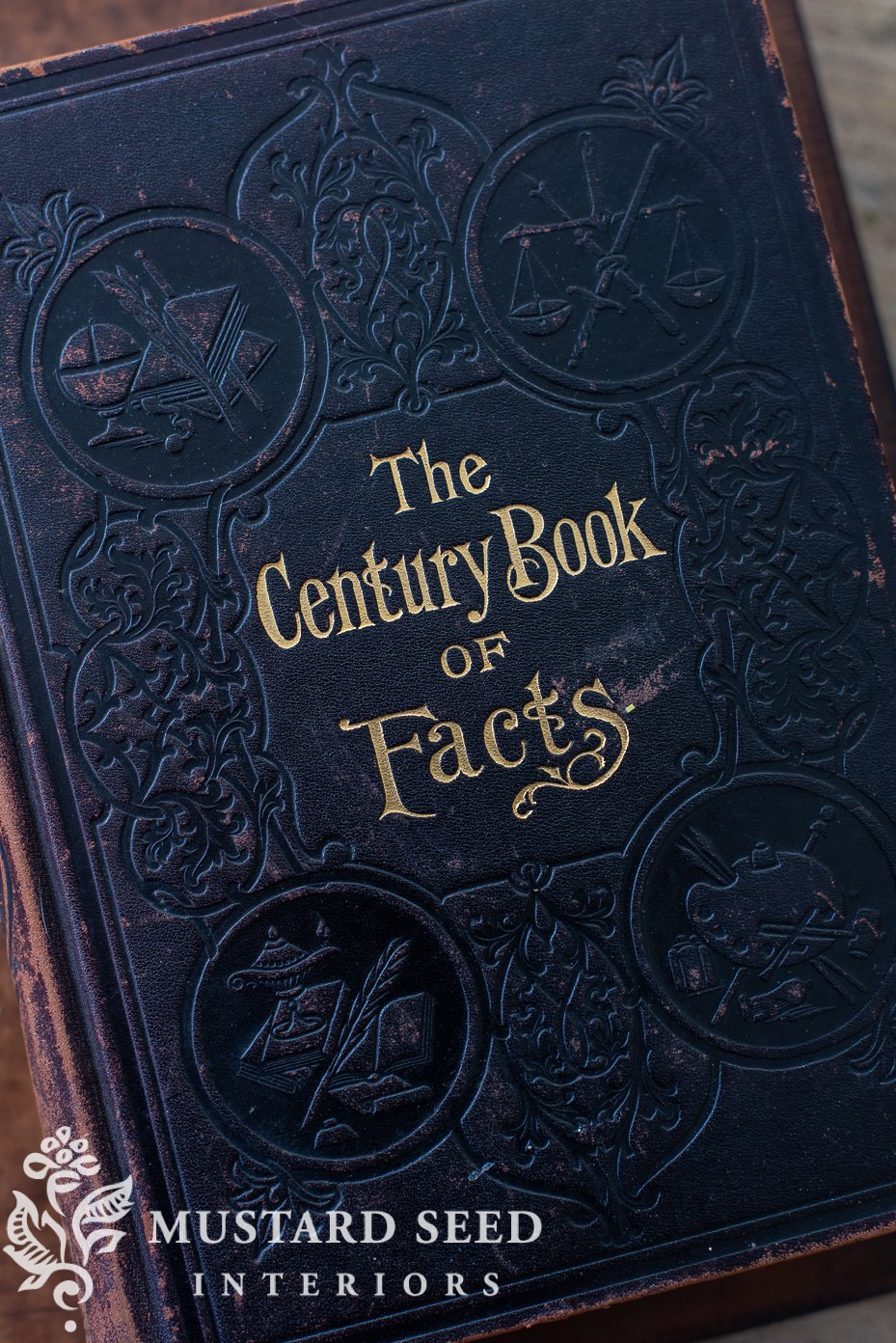 It has a pretty leather spine… 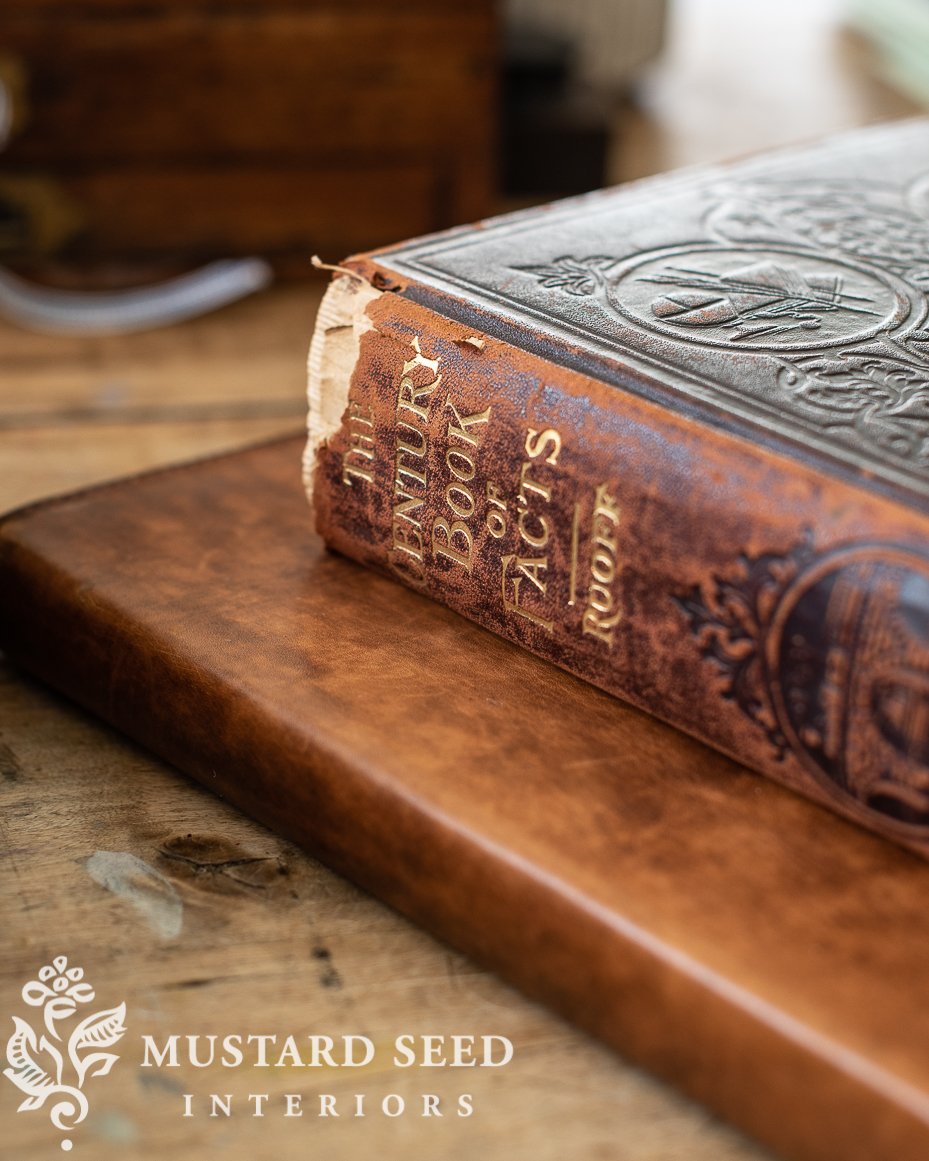 …but what sold me on it was the handwritten notes on the inside of both the front and back cover.  There are notes about the US Revolutionary War, Thomas Edison… 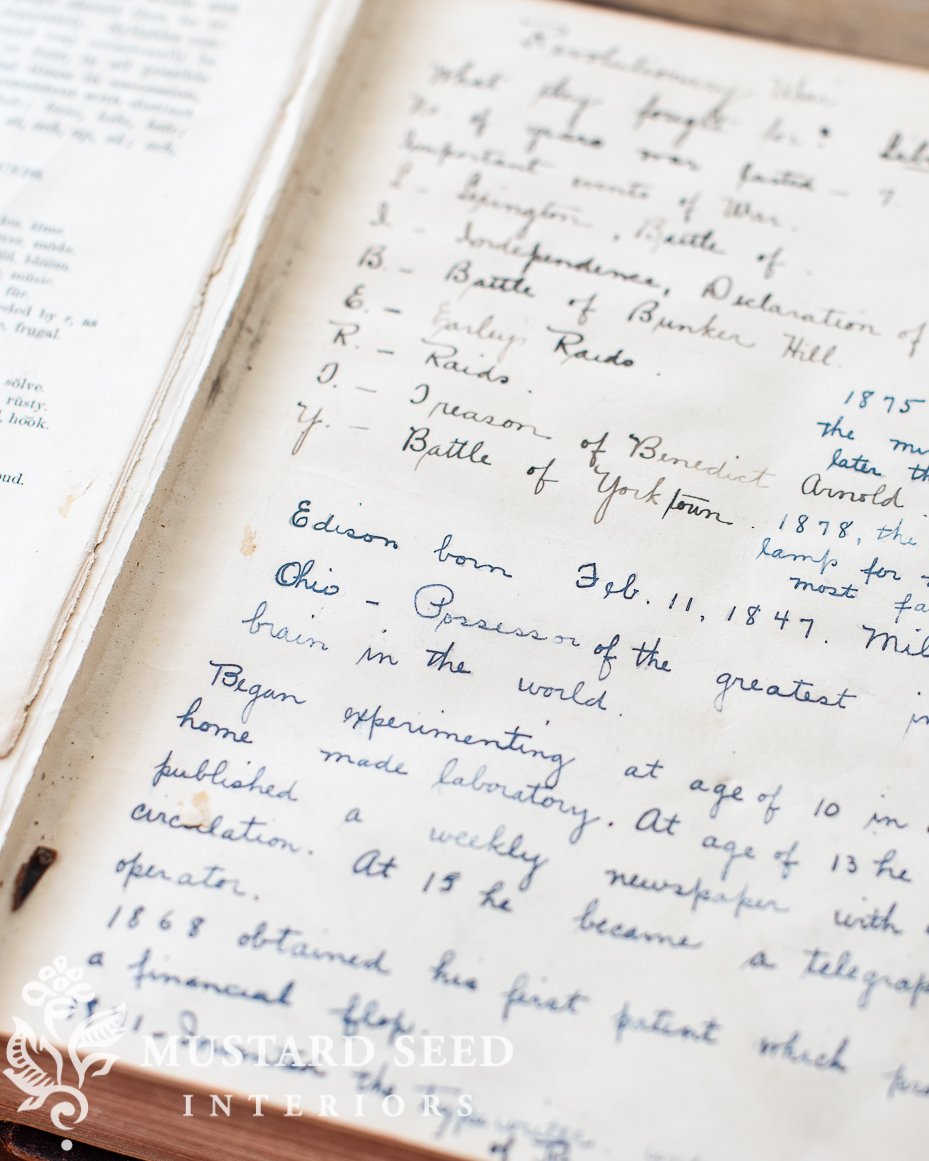 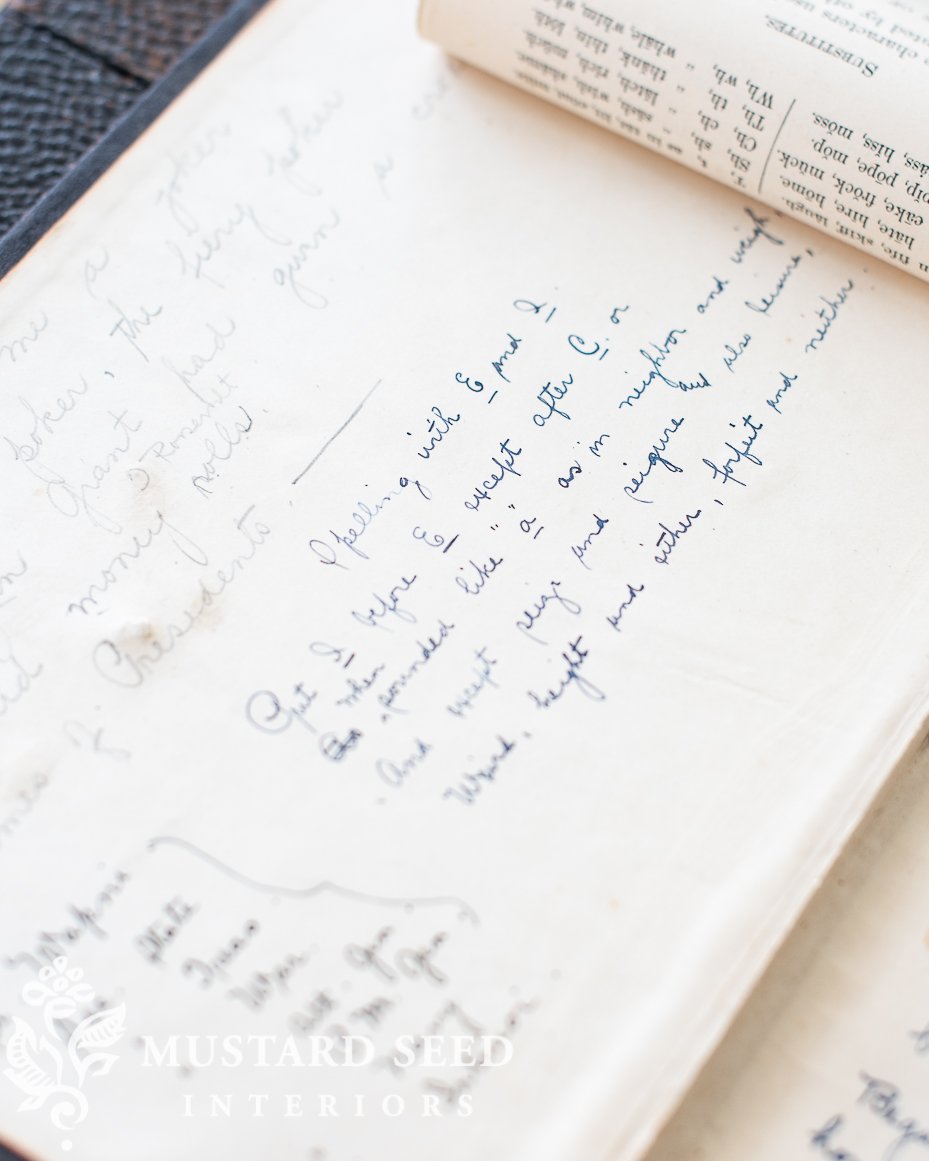 Inside the book was an advertisement for baby prams and cribs… 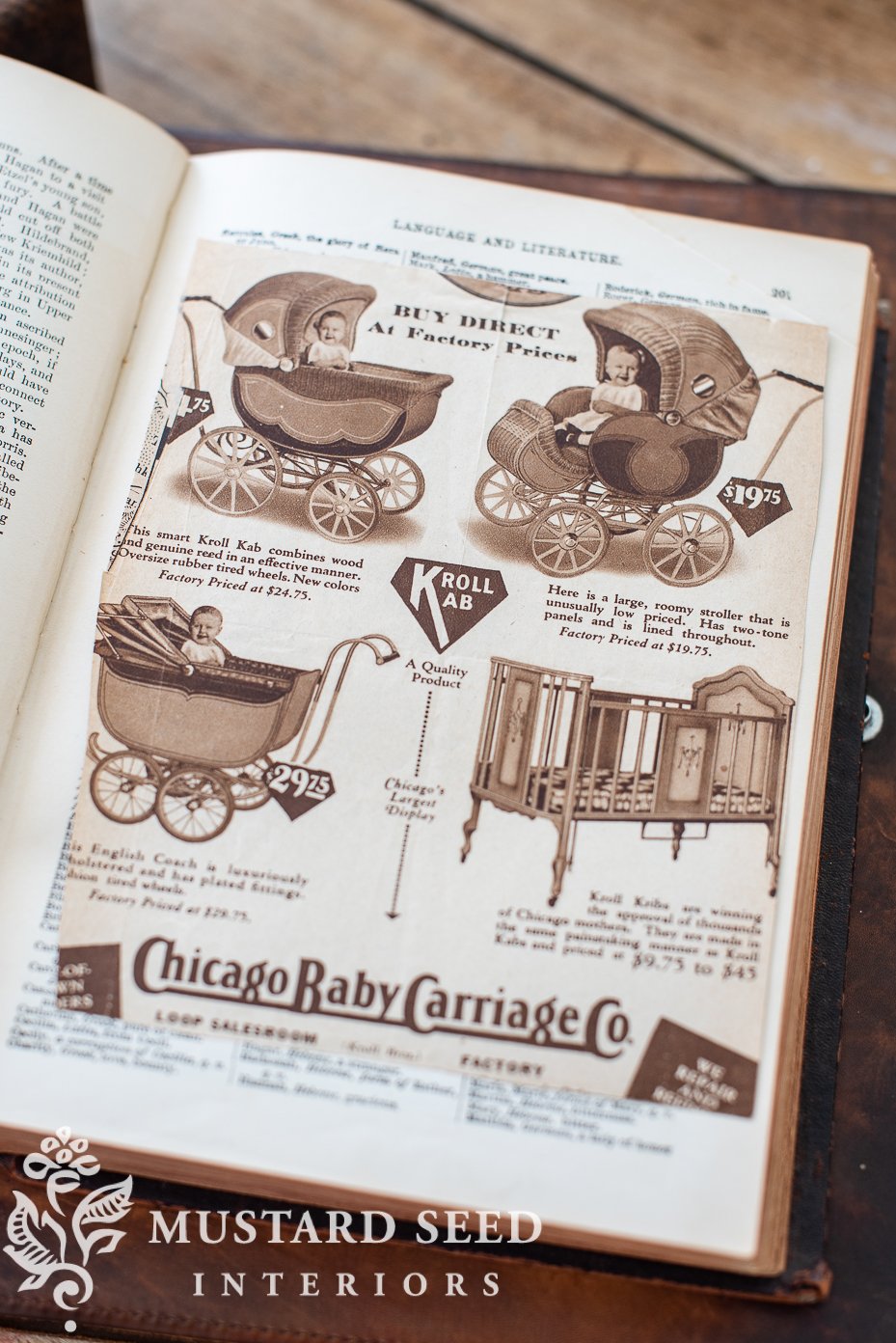 …and on the back cover were greetings for different occasions.  I thought this was interesting – a collection of words for writing cards and letters. 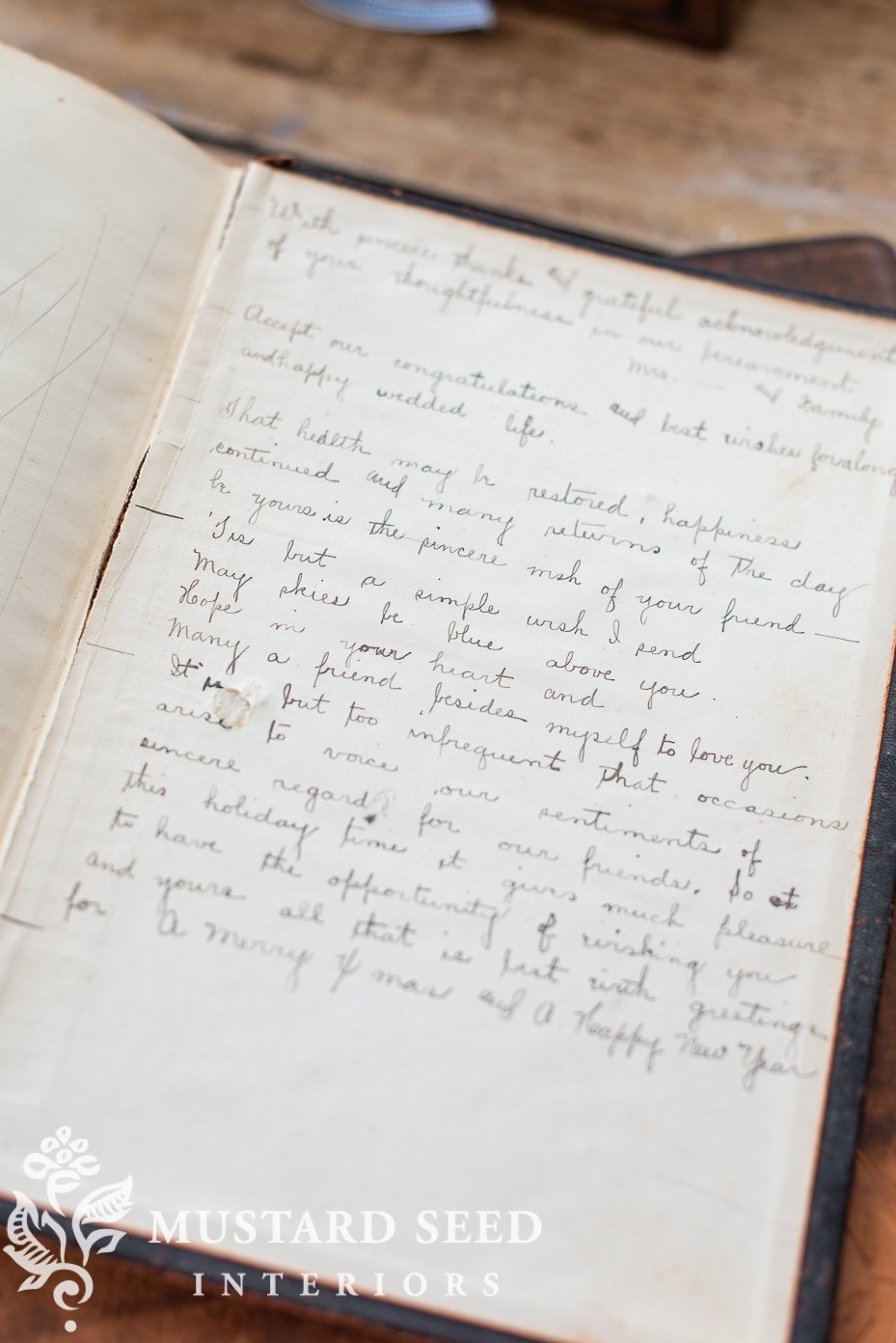 And, the last book I bought was Men, Women, and Manners in Colonial Times from 1897! 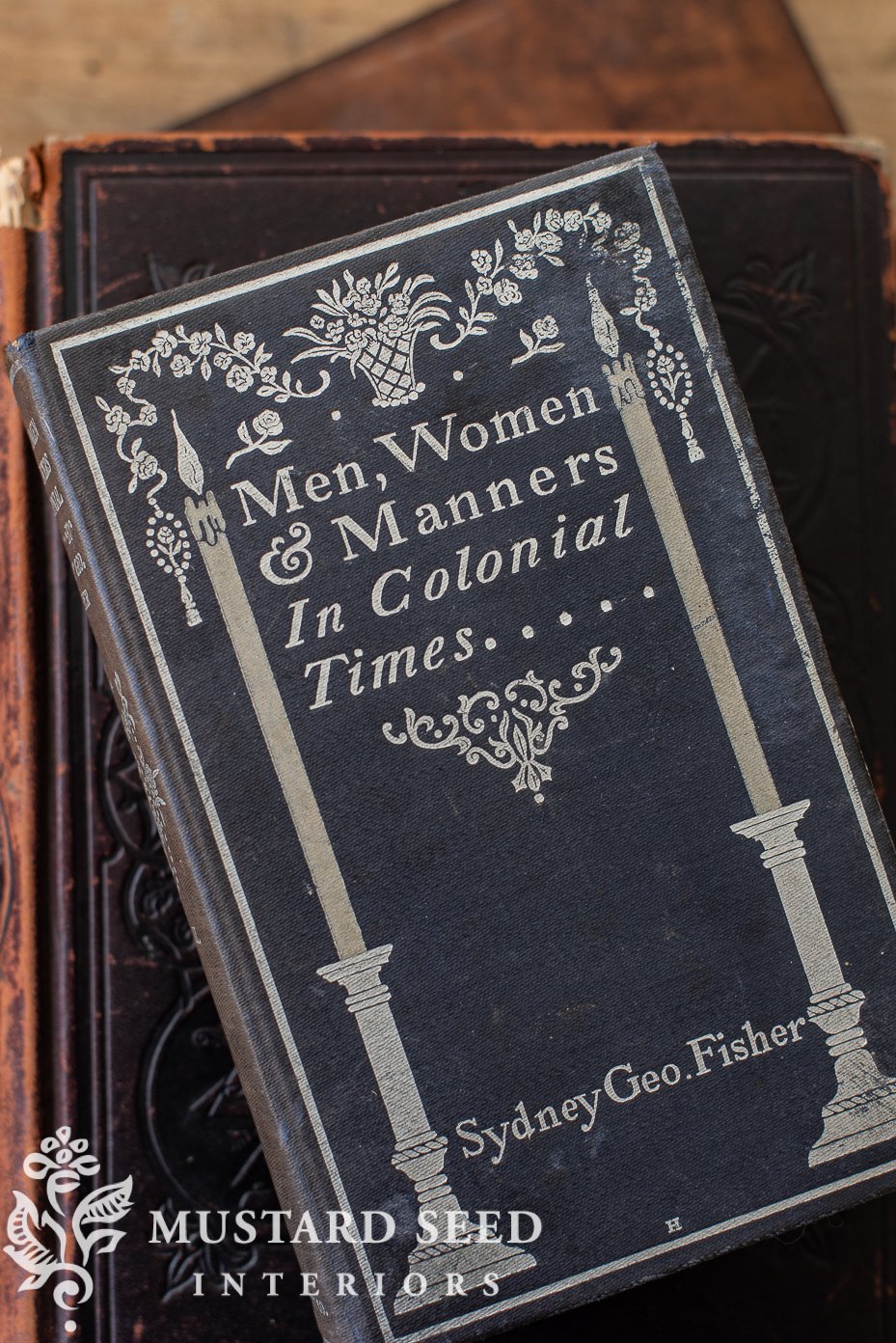 It’s funny, I’ve read some of it and I can’t make out if it’s historical fiction or a non-fiction history book!  It was just $5 and I bought it more for its decorative value than to use as reading material. 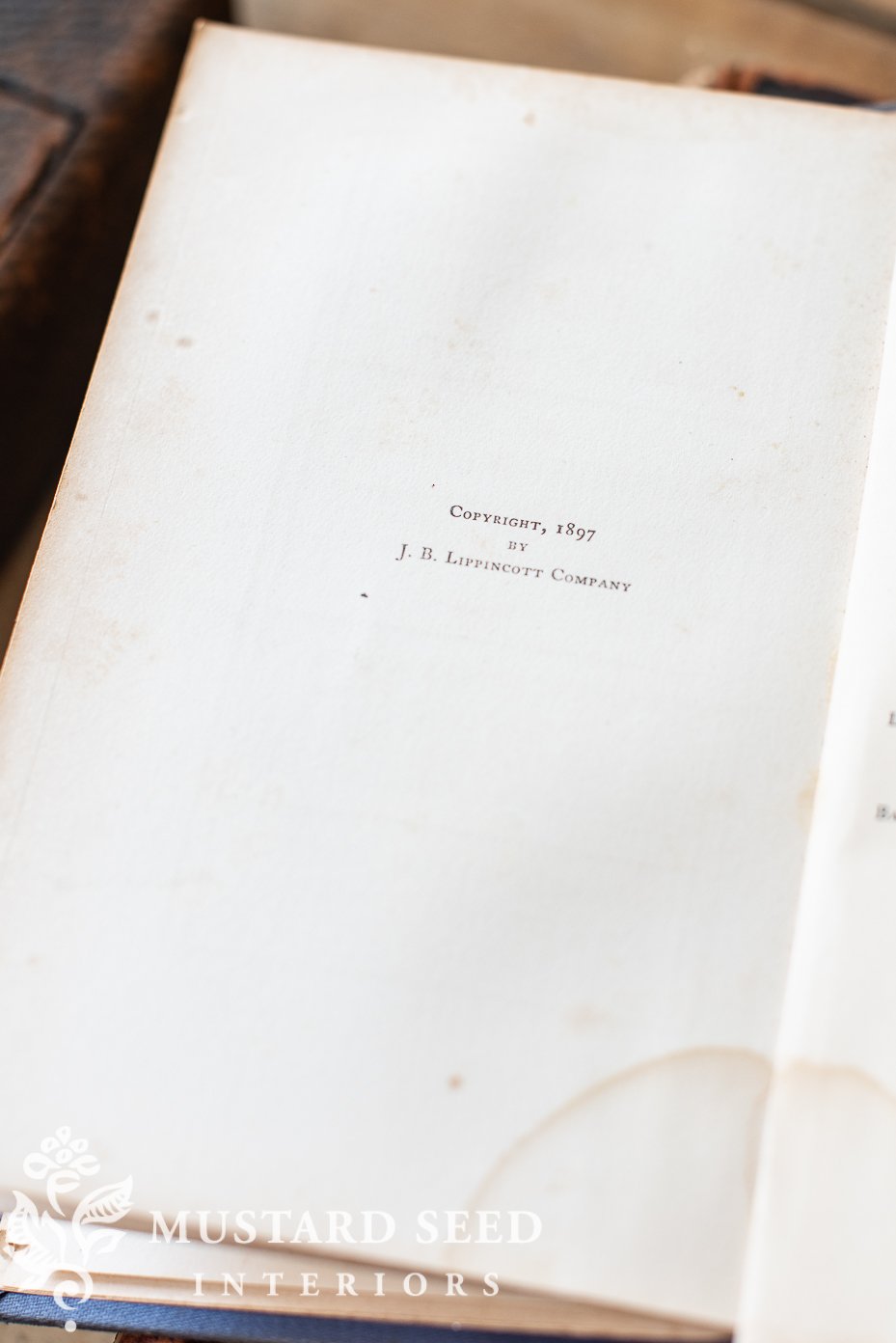 The pages have “fluffy edges”, which I love the look of. 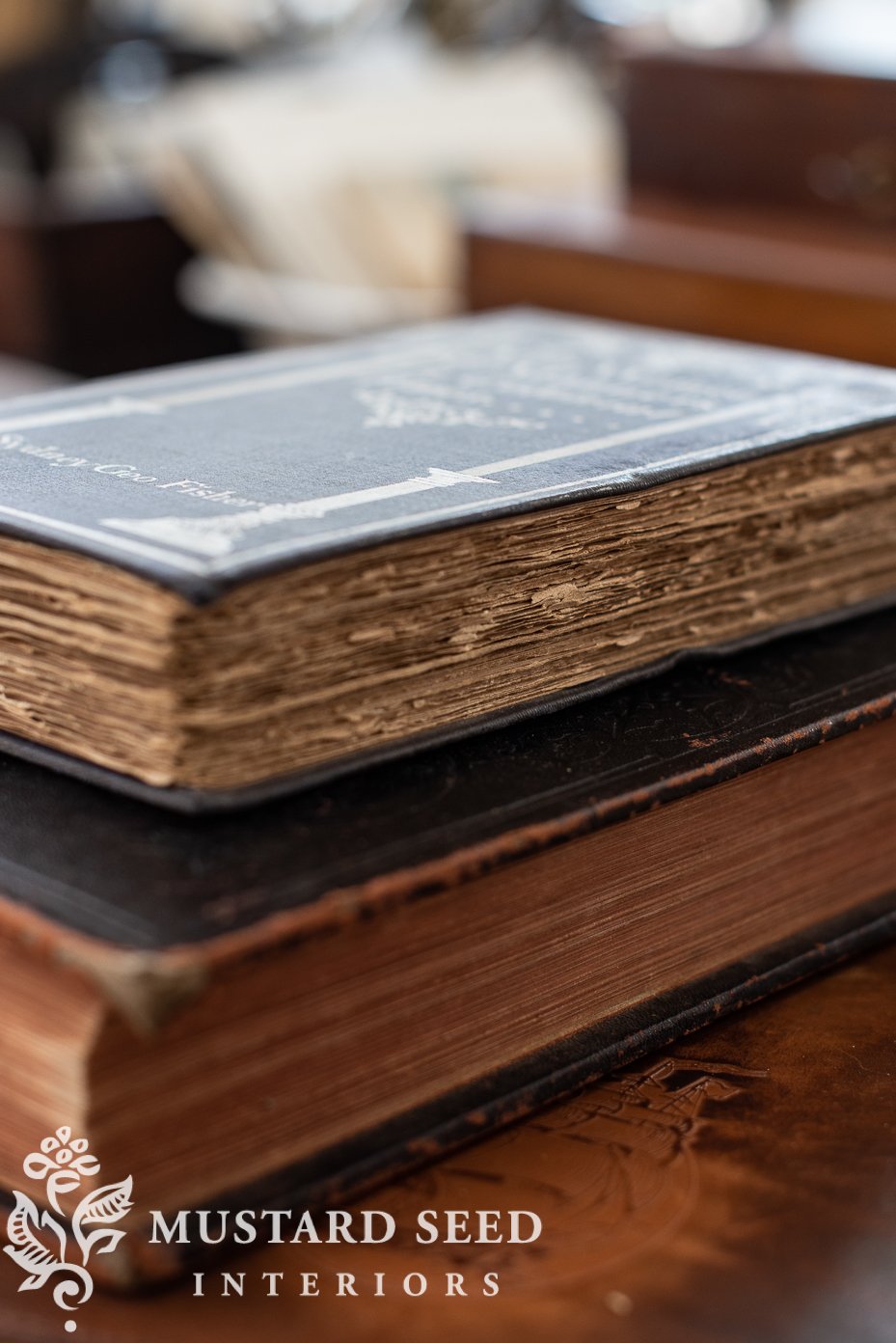 Not that I need “decorative books”, because I have plenty of real ones, but I want to scatter some old books around the basement to reinforce that English library vibe.  I was joking with a friend that I’m going to become one of those people surrounded by stacks of books and old paper.  I seem to be on that trajectory, but I am a bit too tidy for that.

Does anyone else like buying old papers and books?