I hope you had a good three-day weekend!  We ended up doing a lot of work in our yard when it wasn’t raining.  It was hard, muddy work, but we got so much accomplished!  We dug up a bunch of plants and bushes to replace with hydrangeas and hostas, we moved and raked out a big pile of gravel, we built up some areas that were eroding, and I transplanted some perennials to new locations.  I even took the time to sketch out a plan and make a list of the plants I need to transplant and purchase, so I won’t be overwhelmed when I go to the garden center.  I took a bunch of pictures of the before and our progress, so I’ll share those in another post.  Today, I’m sharing about decorating mistakes and the newly-toiled daybed.

In decorating, mistakes are sometimes made.  It’s not a mistake in the sense that it’s wrong or bad, but in the sense that it wasn’t the right choice for you.  Such was the case with this yellow fabric I bought almost three years ago for the sewing room.

Not only was it a mistake, but it was about 10 yards of mistake!  I still like the cheery yellow fabric and I tip my hat at myself for trying to step outside of my comfort zone, but this wasn’t a choice that was true to my design aesthetic.  I knew it as I was stapling it onto this antique French daybed.  And, then I did what I do when I know I went in the wrong direction…I neglect the project.  I never made the custom double-welting to cover the staples.  I just let the bed and the whole room sit unfinished for a couple of years.

Last year, I finally took a step in the right direction and ordered a massive amount of inexpensive blue and white toile to starch on the walls, make curtains, and recover the bed.  A couple of weeks ago, I finally hauled the compressor upstairs and reupholstered the bed to get the project rolling. 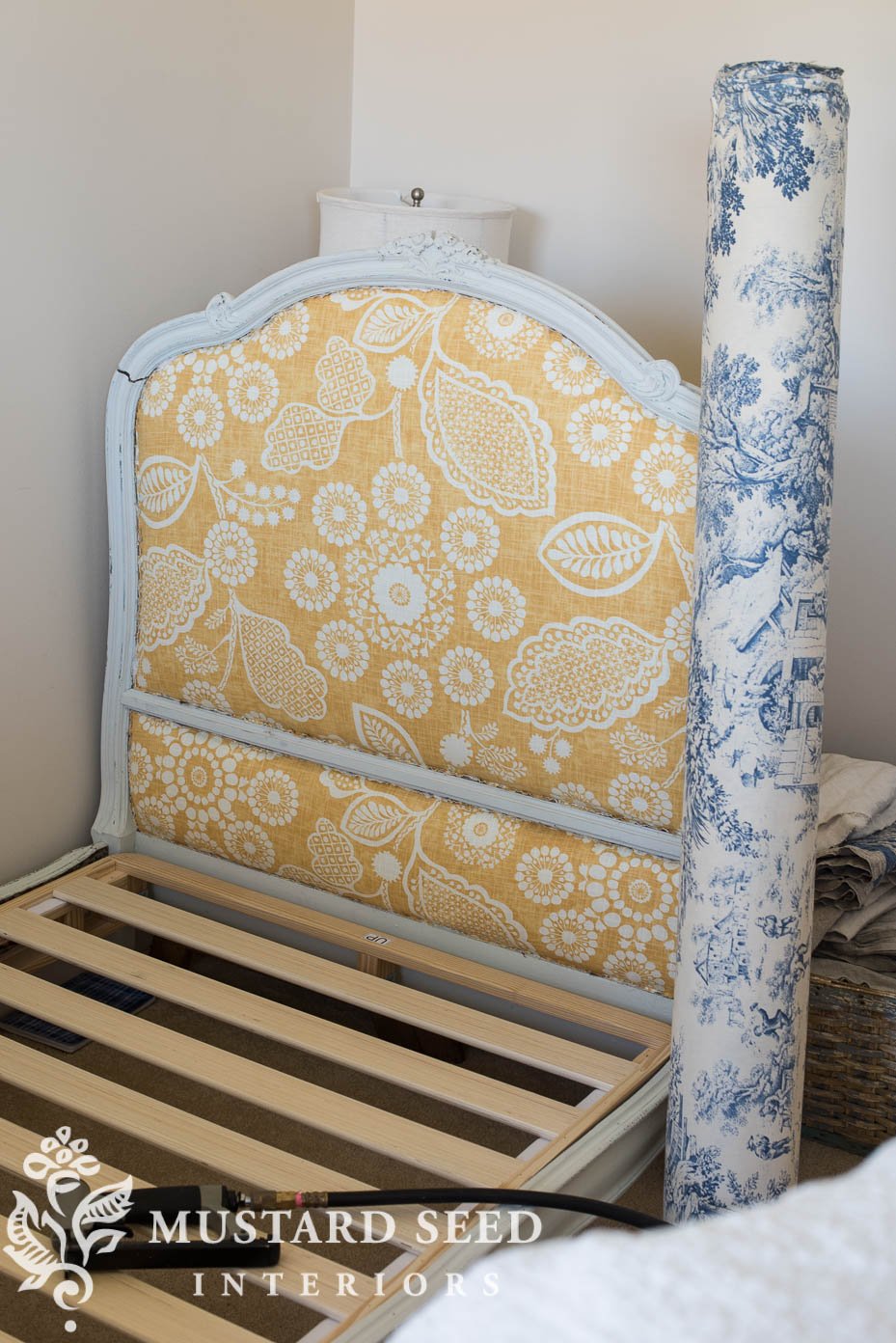 Since I did fairly neat work with the last upholstery job, I just left it in place.  I typically strip a piece before upholstering it, but that really wasn’t necessary in this case.  I was upholstering flat panels and had already painted the frame and made the necessary repairs.

You can see my post on painting the frame HERE. 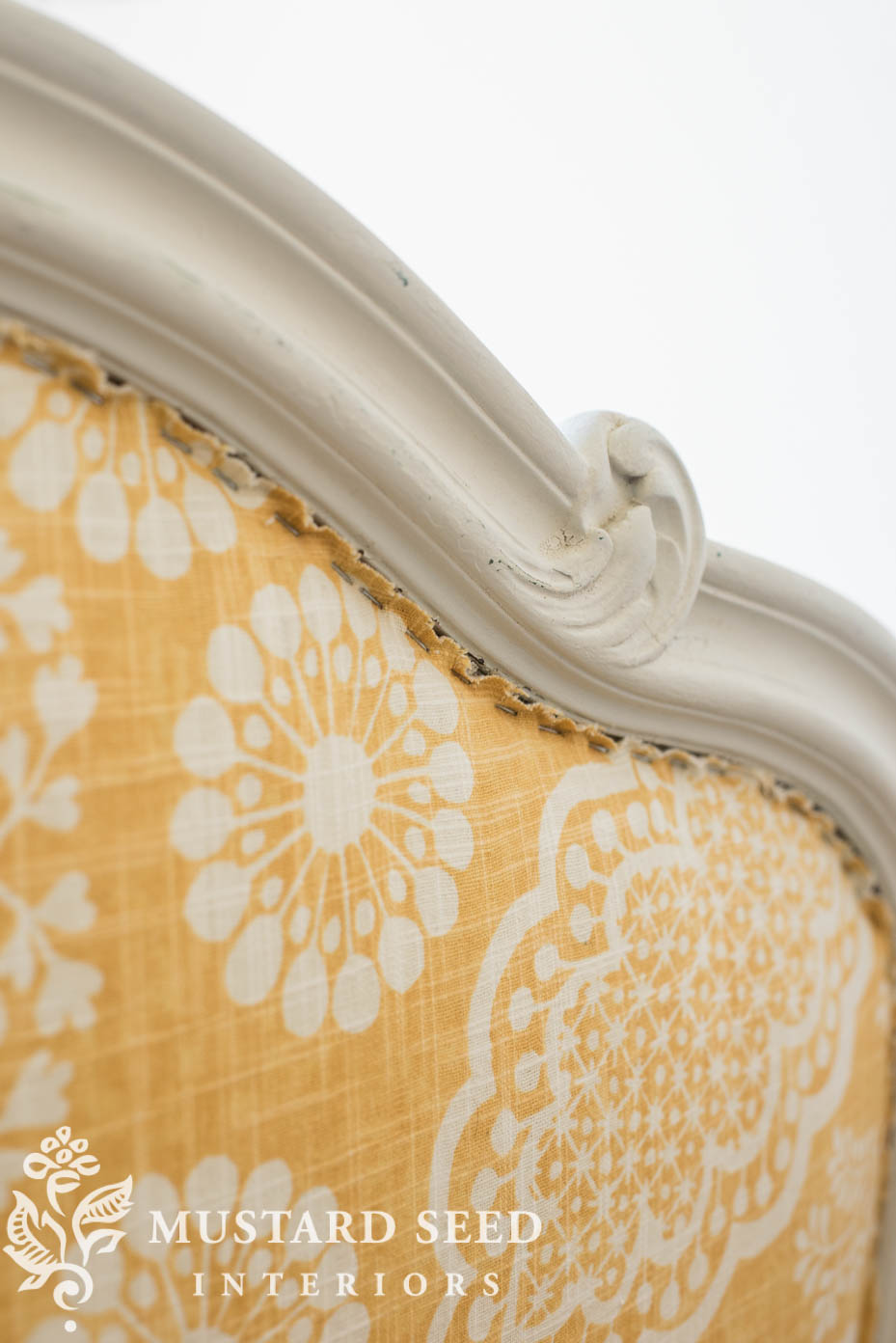 As soon as I got the first two panels done, I knew this was the right direction.  Unlike the yellow fabric, I didn’t have to talk myself into liking it.  I just knew it was right…right for this bed, right for the room, right for me. 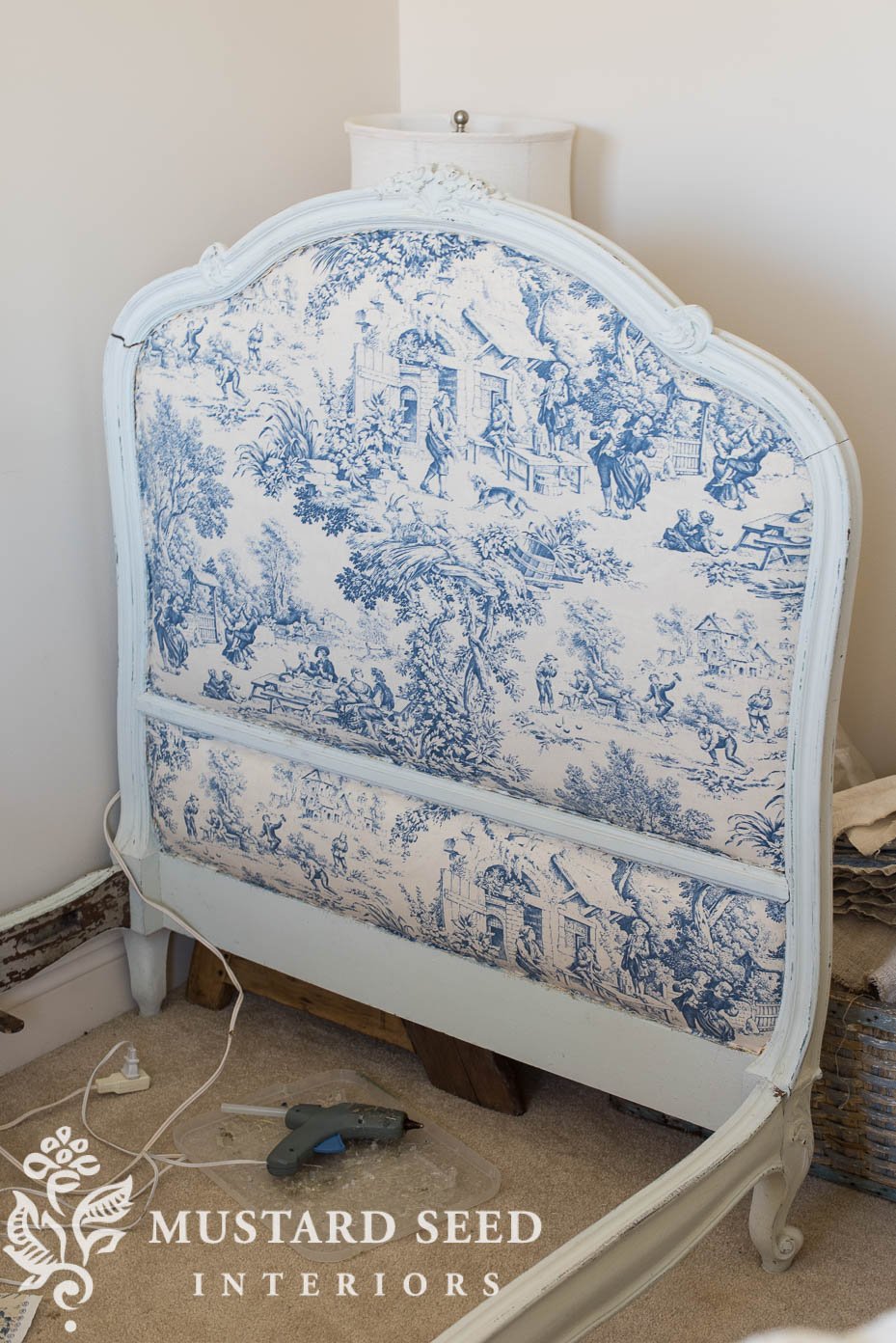 The fabric is Festin in Bleu by STOF.   I applied it to the bed using 3/8″ staples and my porter cable upholstery staple gun.

I didn’t make a tutorial for it, because it’s basically like covering a big chair-back.  If you reference THIS TUTORIAL, it’ll show how to do that.  I had some navy braided gimp trim in my stash and there was enough to use it to trim out this bed.  I was so excited when I counted out the yardage and saw I had enough.  I love how the dark blue frames out the toile. 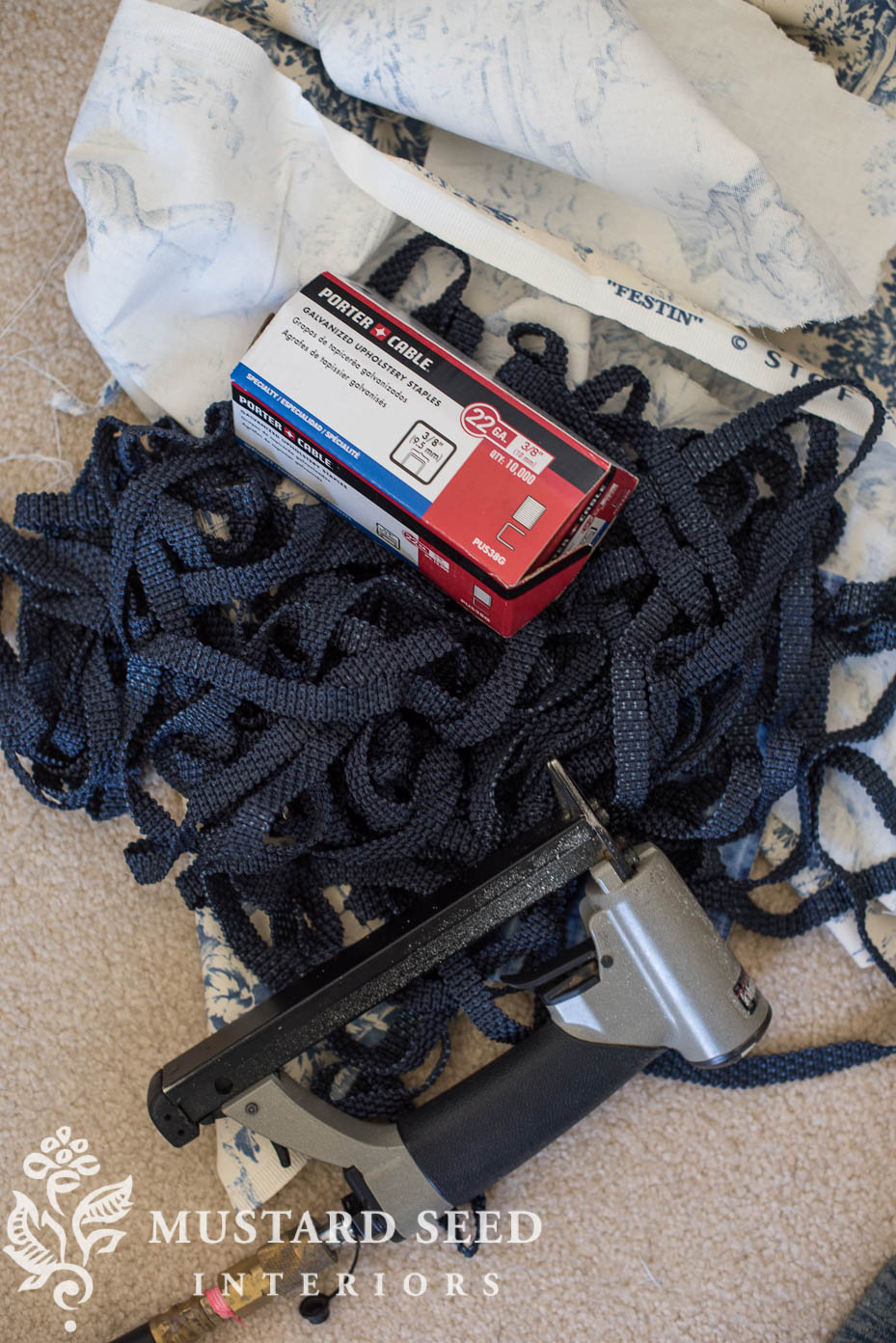 I attached the trim as I usually do – with a hot glue gun.  I’ve been using that method for years and it’s worked great.  There is specialty upholstery glue you can use, but I always have glue sticks on hand.  It’s easy and effective.

And it looks so good!! 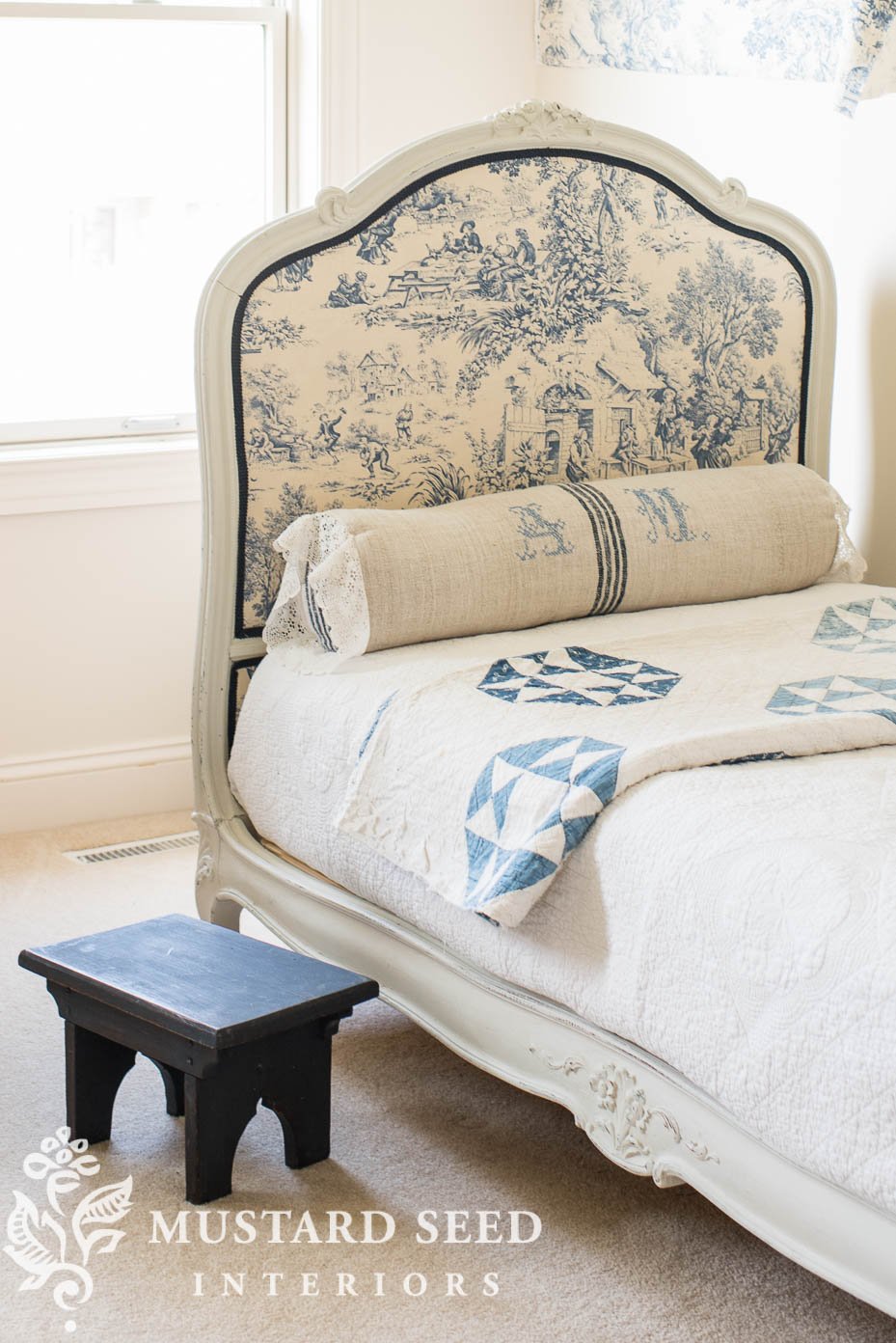 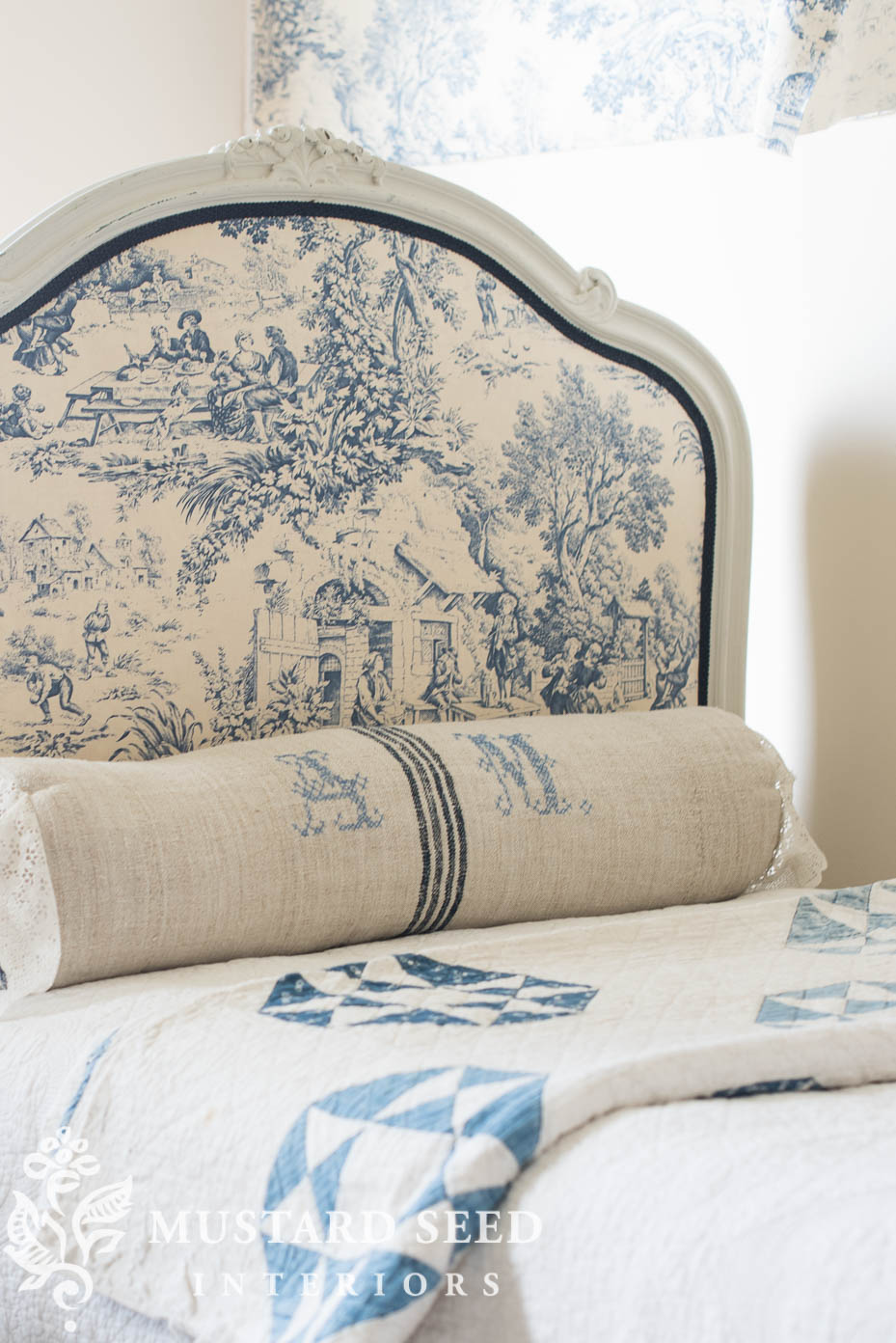 It has me motivated to get that peachy cream on the walls taken care of! 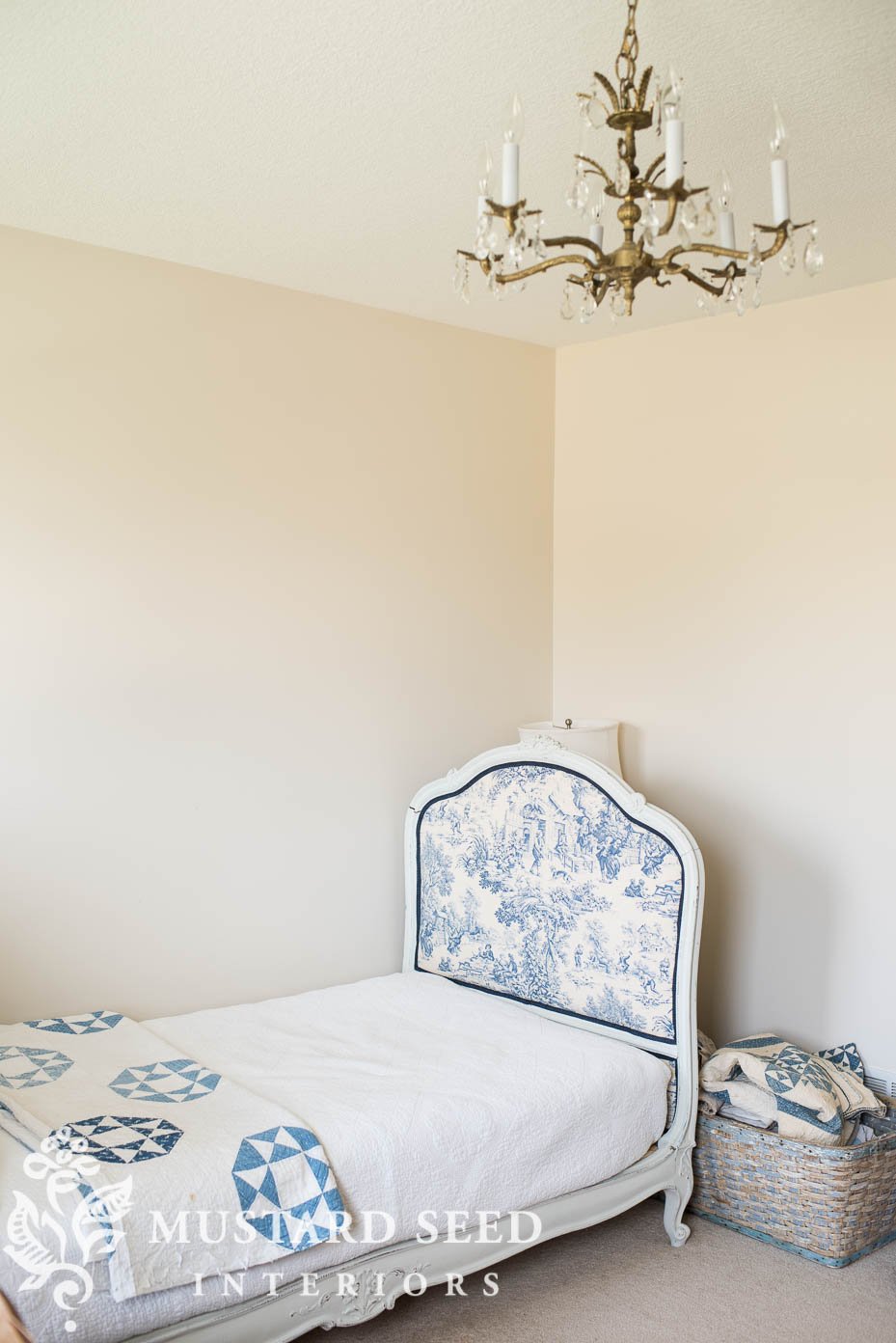 This room is also a bit of a catch-all, so I need to find homes for all of the things I’m storing in here. 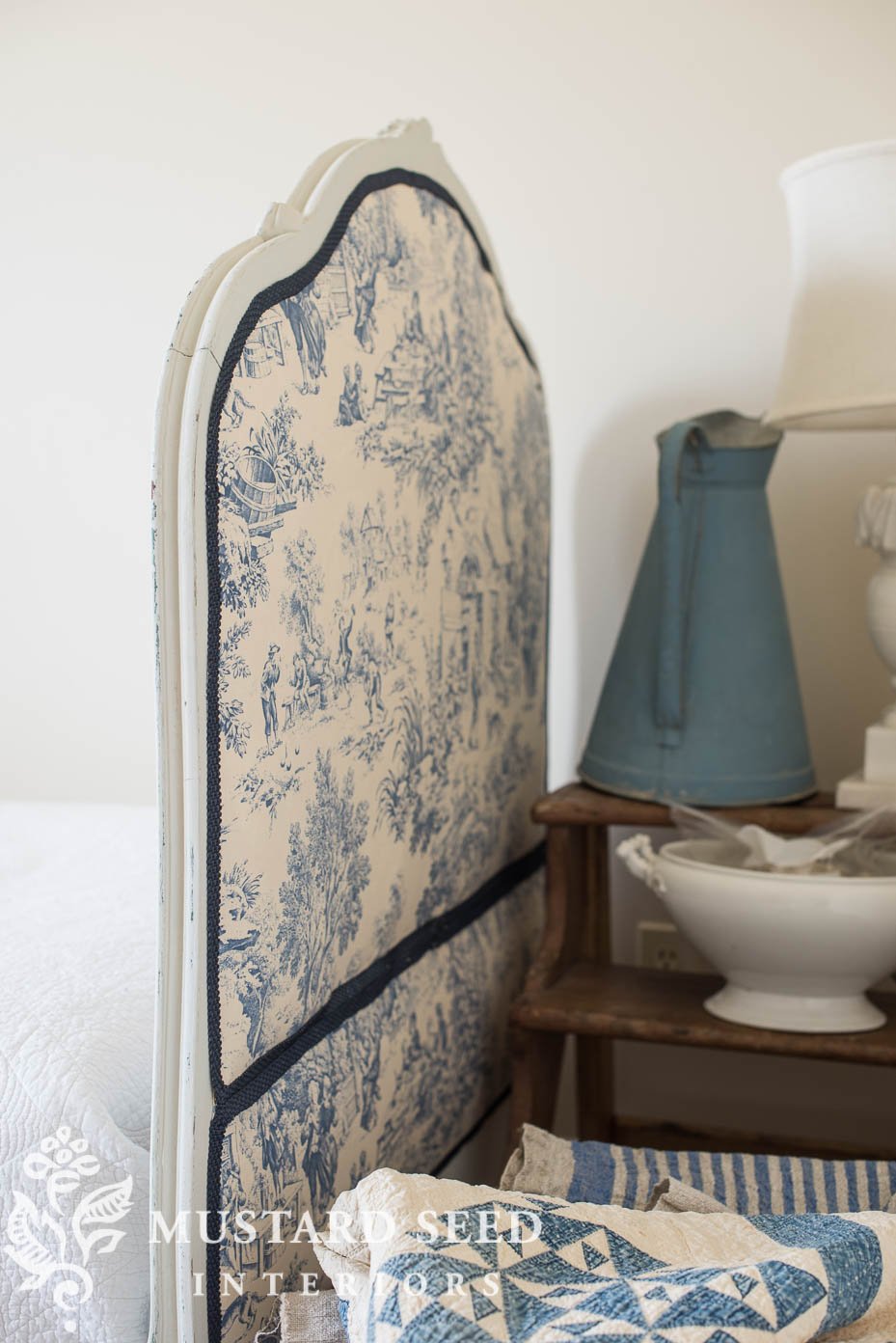 In addition to being the sewing room (I have my machines in here, my fabric stash, and my sewing & upholstery supplies), this is also the “pet room.”  Sebastian likes to sleep on the daybed, so it usually has a blanket over it and his pillow.  (He actually likes to sleep with his head rested on a pillow!)  And we have the litterbox and the cat’s food in here.  We have to keep it up out of Sebastian’s reach or he will eat it!

The litter box is tucked in behind the daybed… 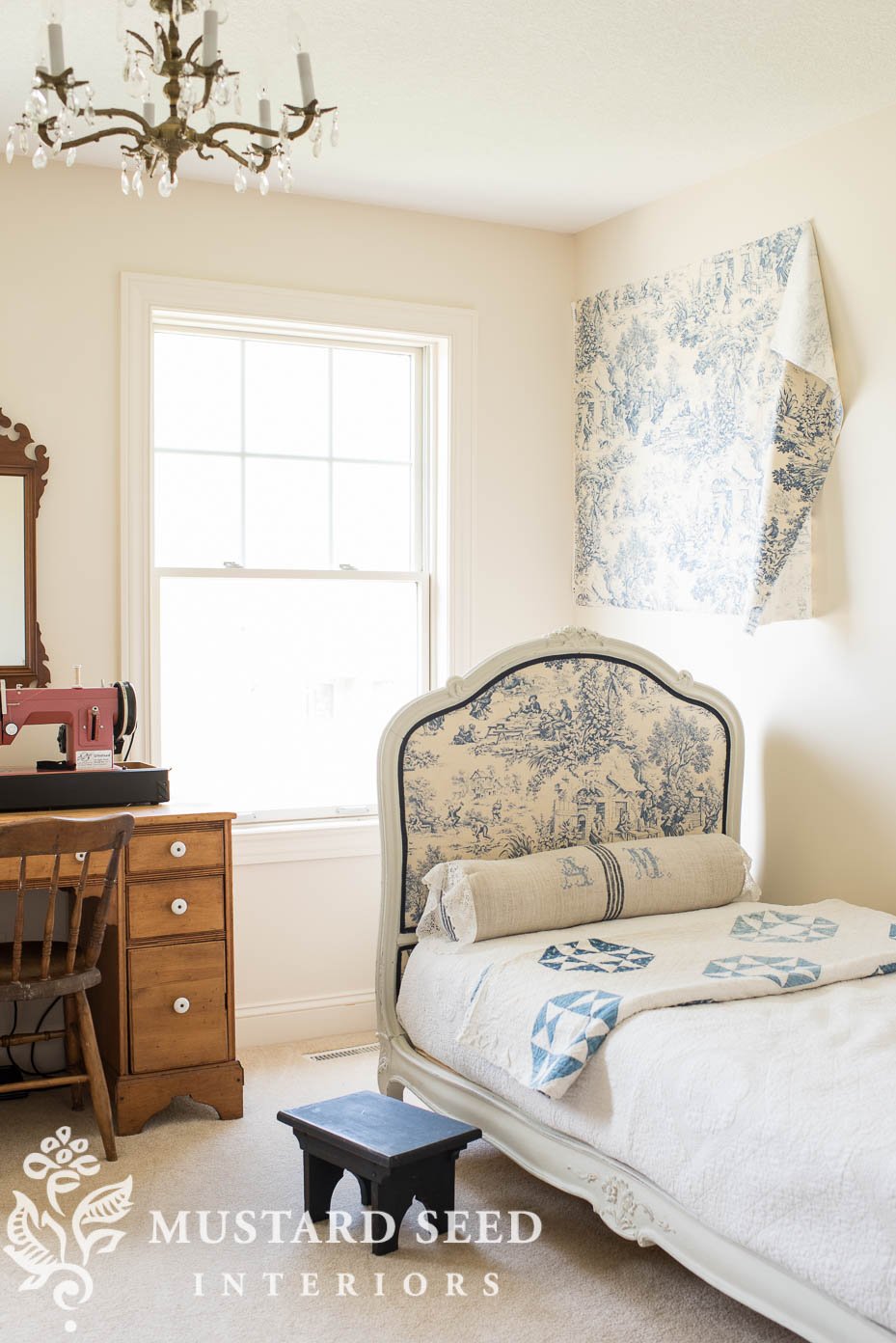 I pulled the mat back for the pictures, but we usually have a litter-catching mat in front.  It’s not anything glamorous, but it’s out of the way and fairly hidden.  The funny thing is that you would think the cats might be spooked when I’m in there running the sewing machine, but I think the rhythmic sound is a cue for them to jump on the desk and eat to disrupt my project or drop a bomb in the litter box.  It happens every time. 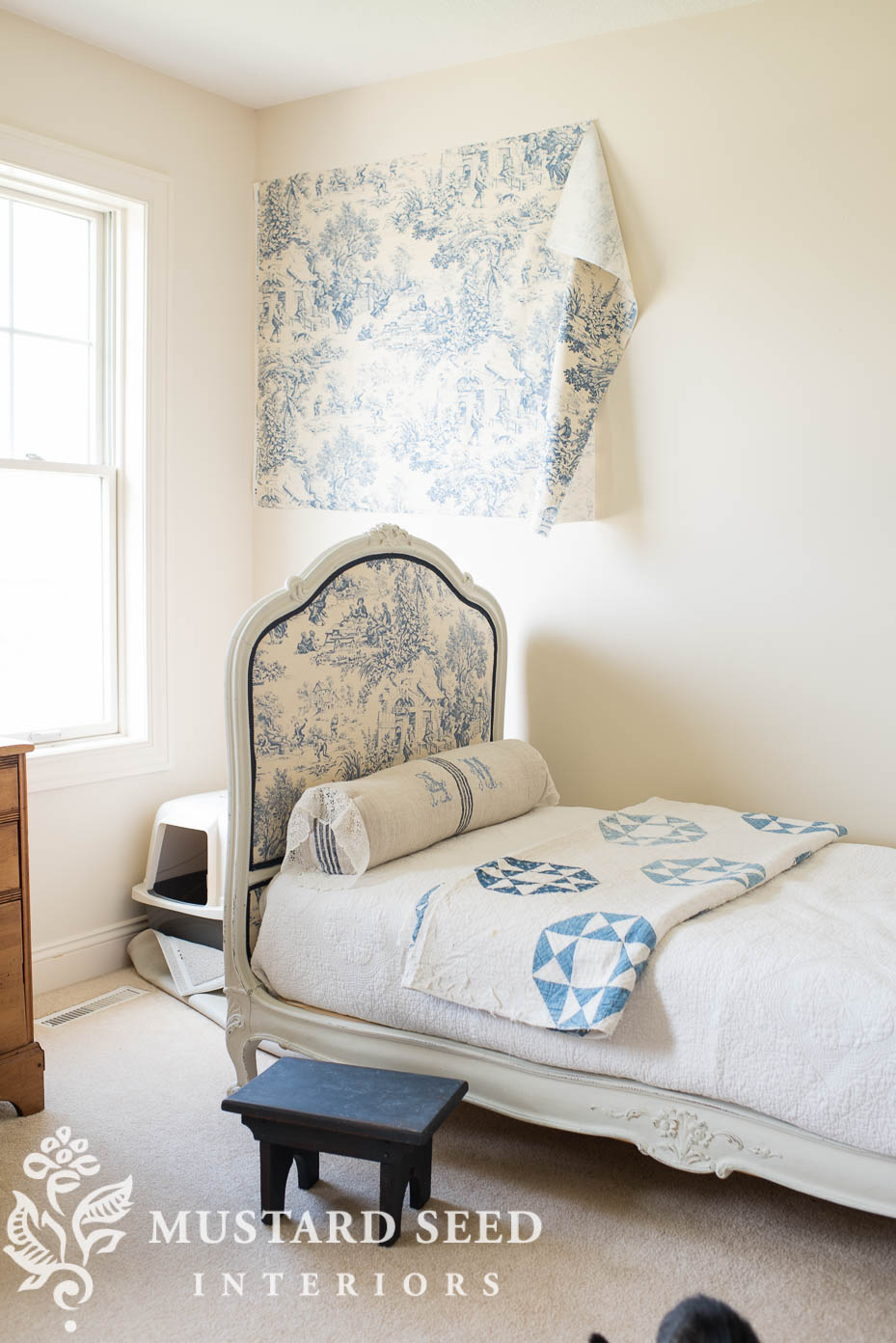 We are kicking around the idea of doing some built-ins around the bed, which might enclose the litter box, but we’re still not sure if we’re going to go that route.

Now that things are opening up a bit in Minnesota, we’ll go to Home Depot soon to get the materials to do the picture frame molding, and then I can start starching the fabric to the walls.  I also ordered some dark blue linen to make a bed crown.  The linen will be on the interior and the toile on the exterior.  I think it’ll look striking and make a real focal point of the bed. 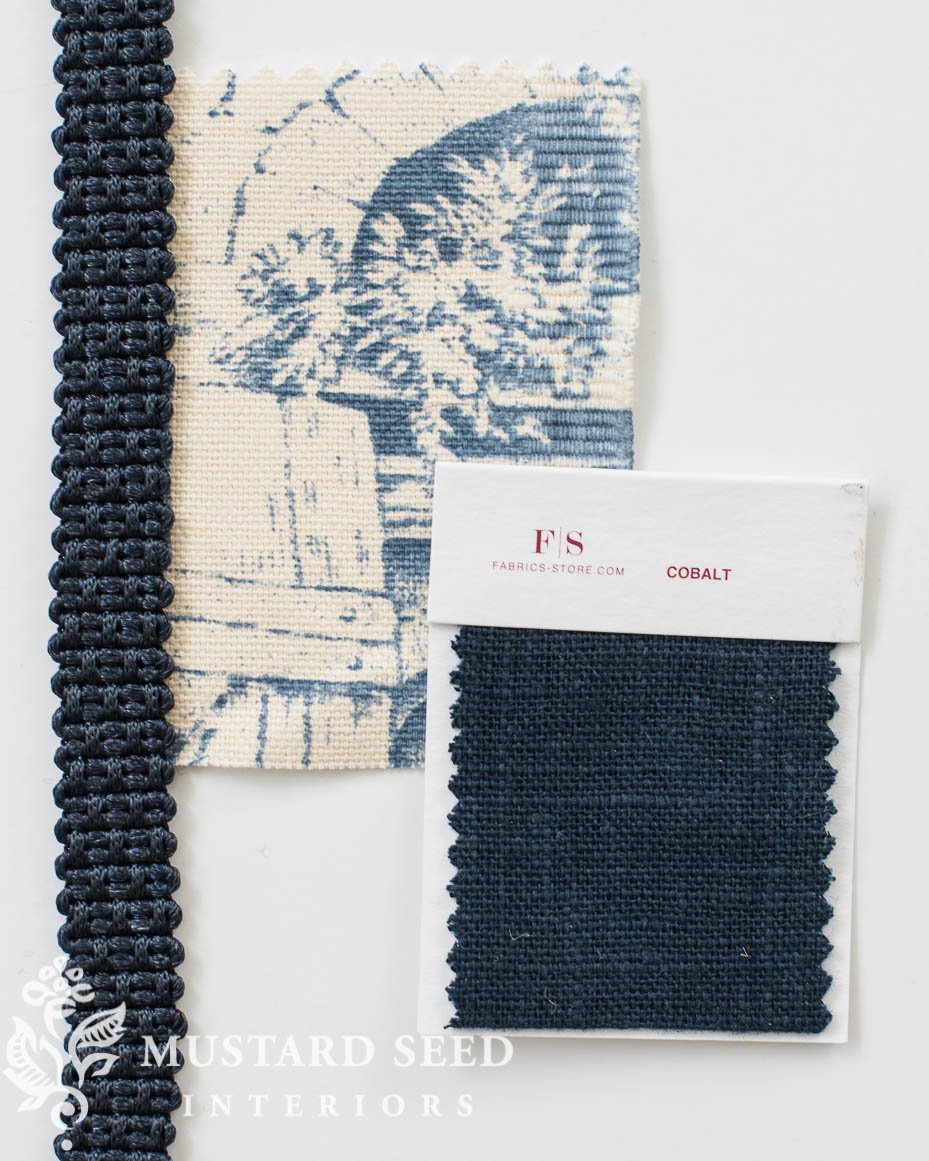 As I said earlier this week…  progress is slow and steady!