Years ago, when I first had issues with my shoulder, I cracked a joke about recliners.  I was in the ER for severe shoulder pain from calcific tendonitis and the doctor suggested I sleep in a recliner to take some pressure off my shoulder.  I looked at him and said, “Do I look like someone who would have a recliner in my house?”  I just meant it as a joke and it probably wasn’t too effective given I was wearing an oversized hoodie, sweatpants, and Crocs.  I probably looked exactly like someone who would have a recliner.  Anyway, all of this is to say that I had to eat my words when Jeff was desperately shopping for a recliner I could sleep in after my shoulder surgery.  And, I had to admit two things.  First of all, recliners are pretty awesome.  Second, recliners have come a long way from looking like something plucked out of a Winnebago.  In fact, there are recliners that look like very traditional pieces of furniture like wingback chairs and rolled armchairs.

You’re all so savvy that I’m sure these two relatively recent revelations to me aren’t new at all to you.

My mom has a wingback recliner and you wouldn’t even know it’s a recliner.  I sat it in when we were staying with them and it was surprisingly comfortable.  It’s not as comfy as an overstuffed recliner, but it’s perfect for reclining and watching a movie.  As we were moving furniture back into the living room after the floors were refinished, I imagined getting a wingback recliner to put next to the sofa.  With this set-up, we could have comfortable movie-watching seating for our family of four.  Two could sit on the sofa, one in a wing chair with a footstool, and one in the recliner.  Since this is our only sitting room at present (I’m using the formal living room as a studio), I want to balance comfort and aesthetics carefully.

So, I’ve kept an eye out for a wingback recliner on Facebook Marketplace and one finally turned up last week for $40.  For $40, I can try it out and see how we like it.  The chair isn’t perfect, but it is pretty comfortable and it’ll be a fun upholstery project.  Of course, I am going to reupholster it!  I might use the fabric on the bolt behind the chair, but that will likely be the curtains.  I’m still deciding. 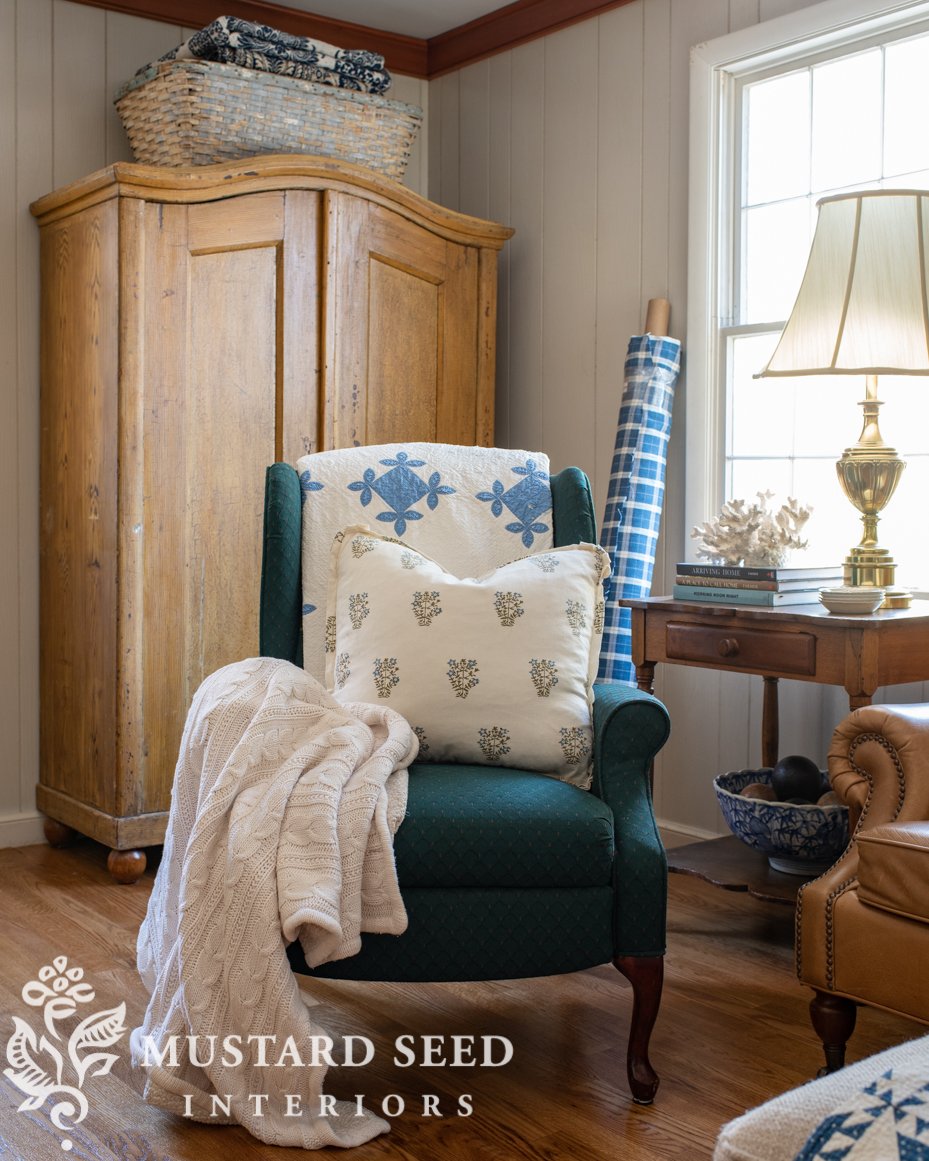 When we first brought it into the room, I threw a couple of quilts over it, but it looked like I was trying to hide something really hideous and that just wasn’t the case.  The chair was improved by taking off the quilts and just letting it be until I get to it.  With an antique blue and white quilt folded over the back, a comfy cable knit throw, and a pillow that ties in the green just enough, it works.

I’ve never recovered a recliner before, but I think I’ll be able to figure it out.  I plan to do a bit of a hybrid of upholstery and slipcovers, so certain pieces, like the back, arms, and seat will be removable and washable.  The moving parts will likely be reupholstered, but we’ll see as I get into it.  I’ll share the process, but if you want to see how to make a slipcover for a wingback chair, you can find a video slipcover series HERE. 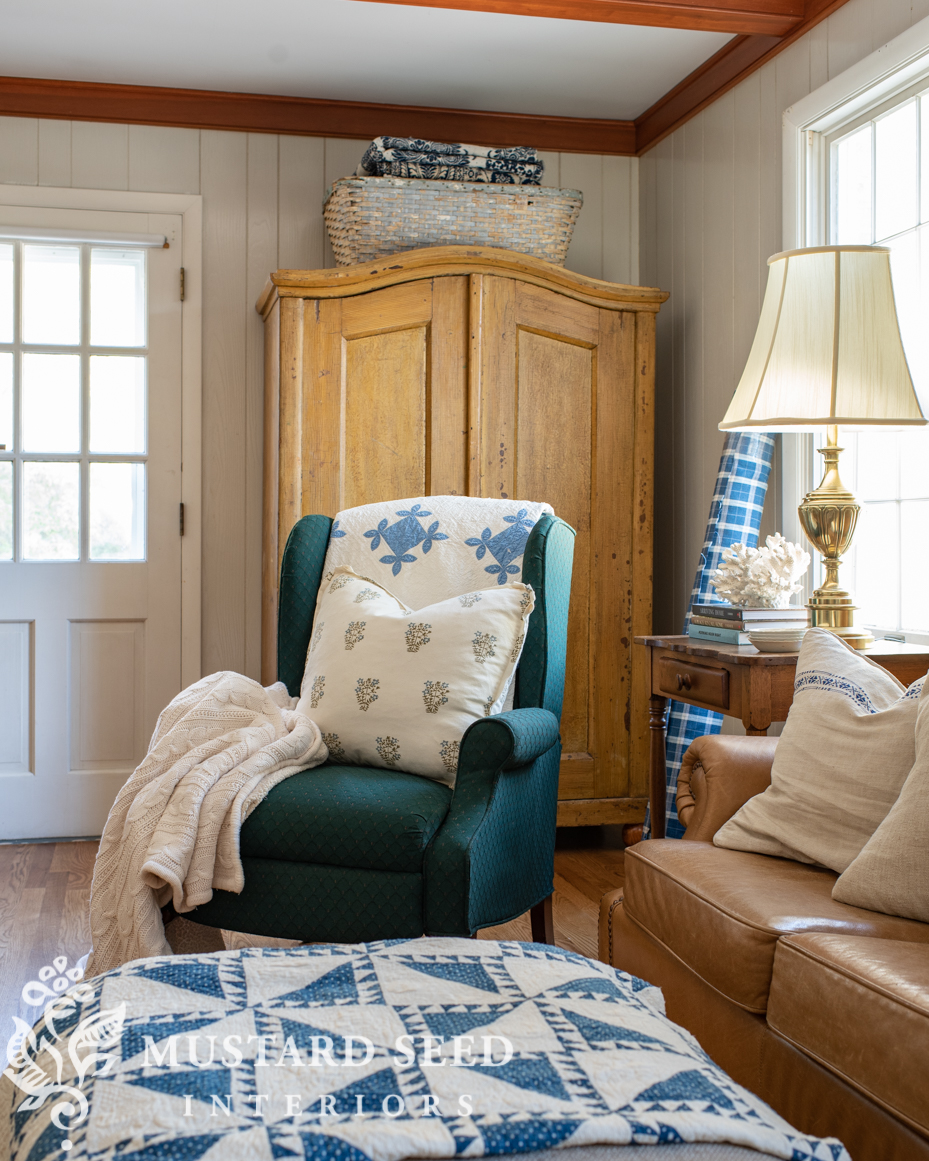 It’s been so nice to have this room usable again with the finished wood floors!  We still have a lot to do in here, but it is at least a comfortable place to sit and relax.  We condensed two pretty large rooms into this one smallish room, but we really love it.  It feels inviting and just right.  Just enough…not too much. 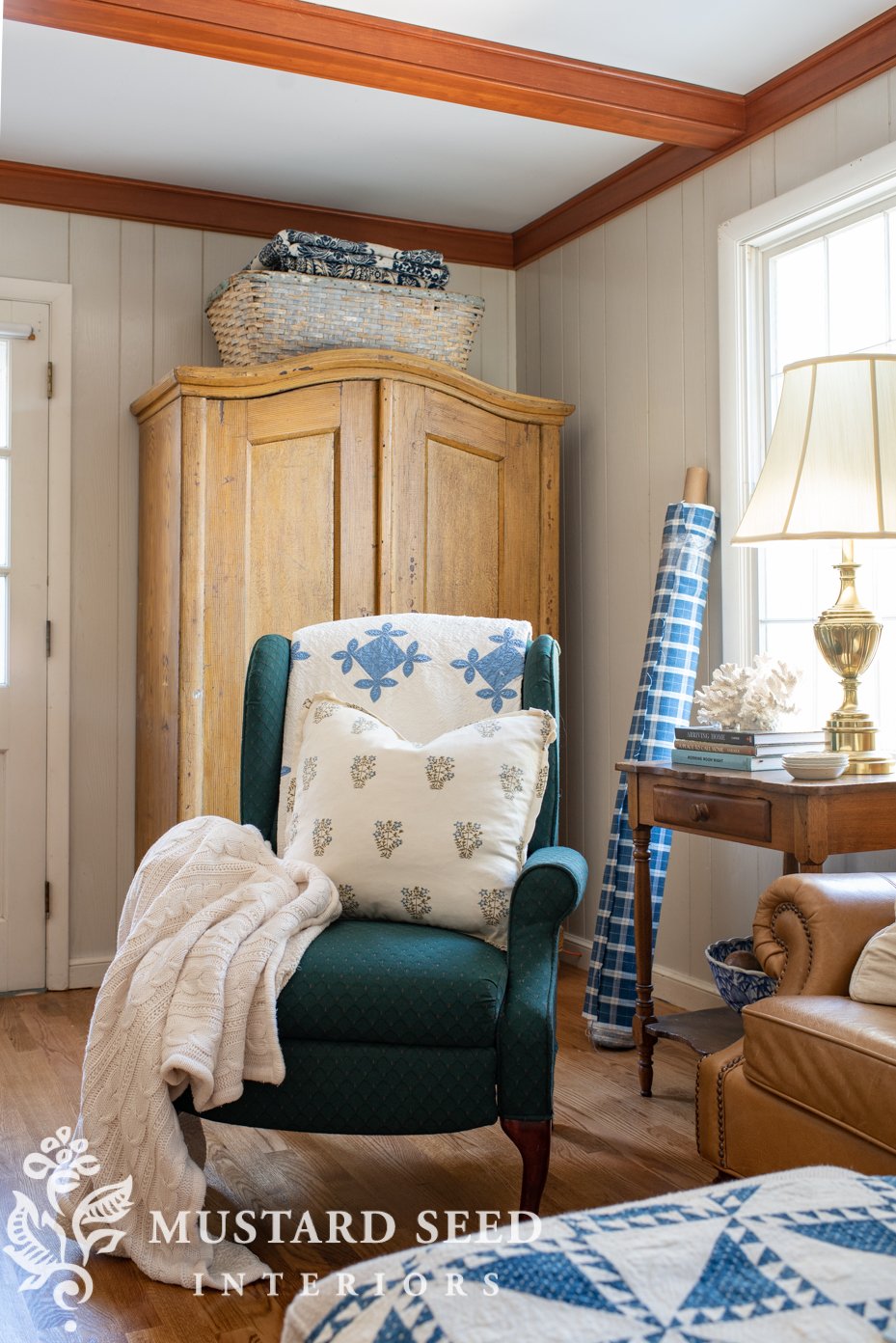 Jeff and I picked up a few other small pieces last week, so I’ll be sharing those, too…