I’ve had the painting-checkerboard-floors itch for a long time!  Back in 2012 I was contemplating finishing my dining room and living room in a two-toned stained checkerboard pattern (you can find that post HERE), but Jeff didn’t love the idea and talked me out of it.  I was slightly relieved because the prospect of doing all of that geometry made me nervous.  I just wasn’t sure I had the patience or attention to detail to pull it off well.

When we moved into this house, I knew the studio would be the perfect candidate to finally try a checkerboard floor, but there was just so much to be done that it seemed to be silly to crawl around on the floor taping off squares for an entire day.  I just needed to get paint on the floors and then deal with more elaborate ideas later.

Can you believe this is what the studio looked like??  I sometimes forget how much it’s been transformed. 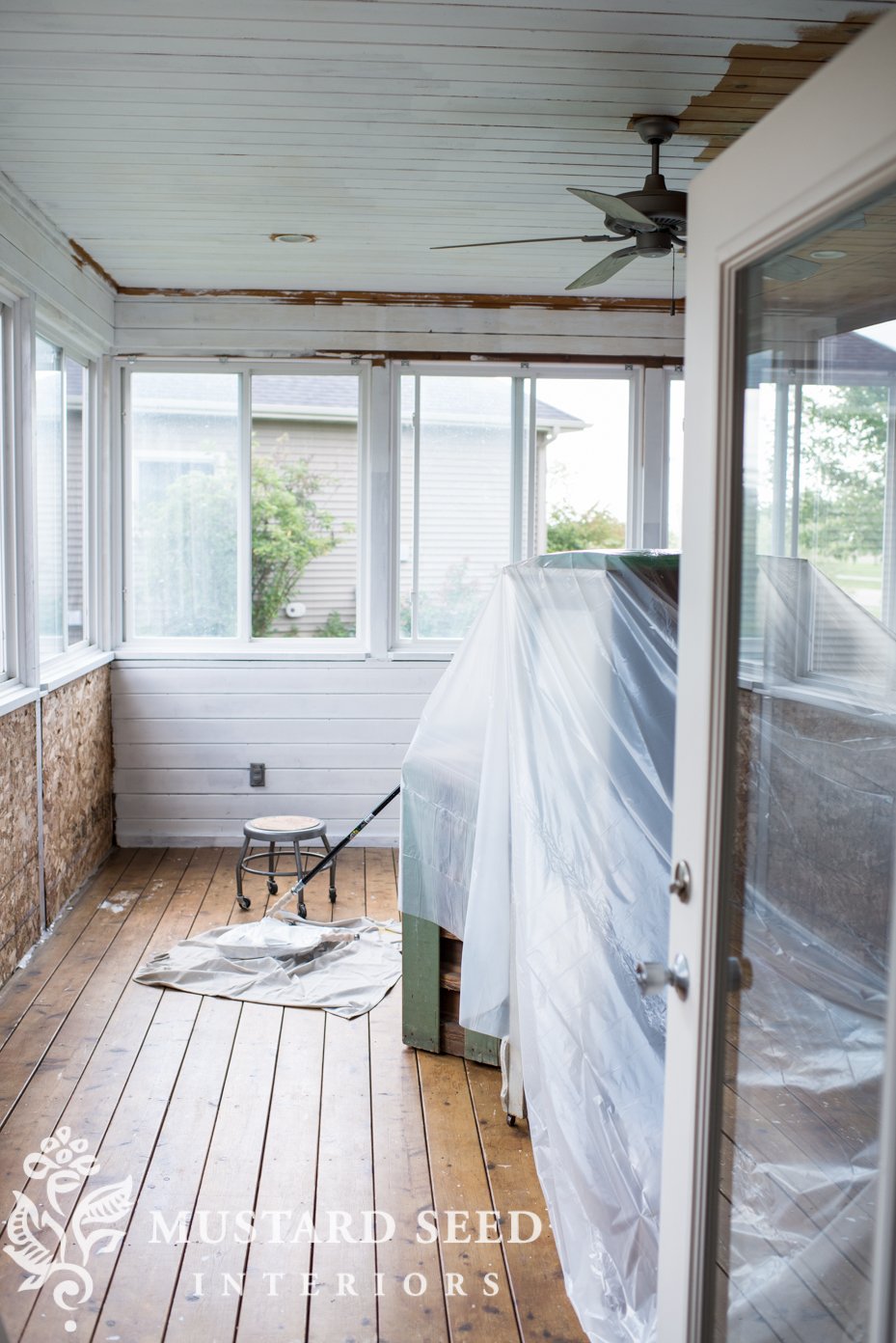 You can find the post on painting the studio floors the first time HERE.

What I’ve learned in the 2.5 years since I painted that floor is that the original polyurethane layer is unstable.  From being in an uninsulated space and exposed to extreme temperatures for 13 years, it was no longer sticking to the deck boards very well.  So, as I’ve scooted furniture this way and that, the original finish would chip, taking my quality primer and fresh enamel paint along with it. 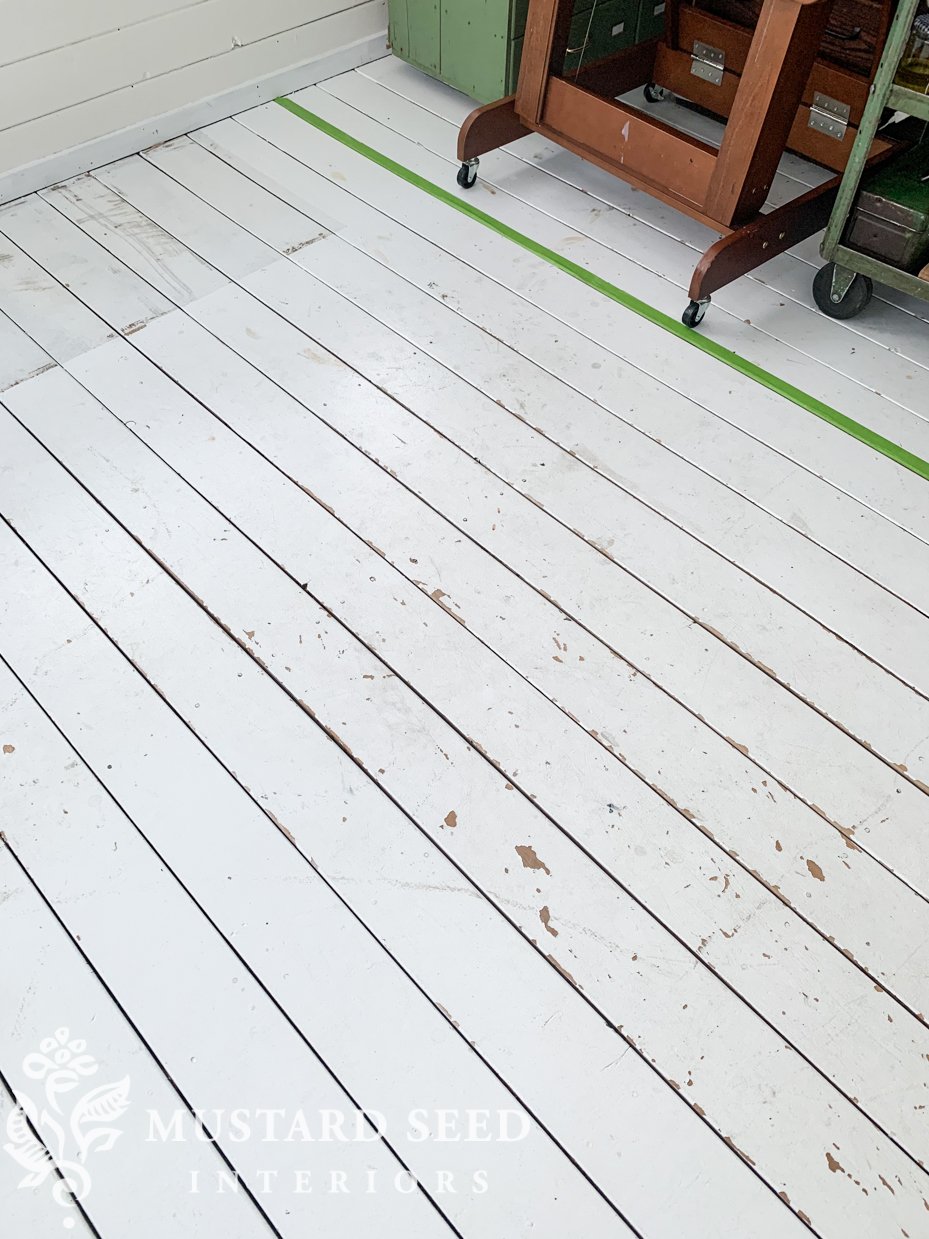 If I could hit the rewind button in this scenario, I would slow down and take a day to sand down those floors.  My foresight was not that good, though, so I’m in the position where I either need to take everything out of the room, rent the sander, and start fresh OR just put a prettier bandaid on top of the old bandaid.  Since it’s a studio where paint will be dripped and furniture will be scooted, I’m opting for the prettier bandaid of painting checkerboard floors.

Since I have some massive pieces in the studio, I’m going to paint the floor in two stages.  I moved everything over to the right side of the room and taped off a line dividing two boards.  This gives me a place to stop that won’t be visible when the whole floor is complete.

painting checkerboard floors | applying the primer and base coat

I applied a coat of Aqua Lock Primer and two coats of Rust Scat Semi-Gloss Waterborne Enamel over three days, waiting for each coat to dry for 24 hours.  It’s not necessary to let the primer and paint dry that long between coats, but I’ve learned it’s better if you’re patient with paint and give it more time to dry than not enough. 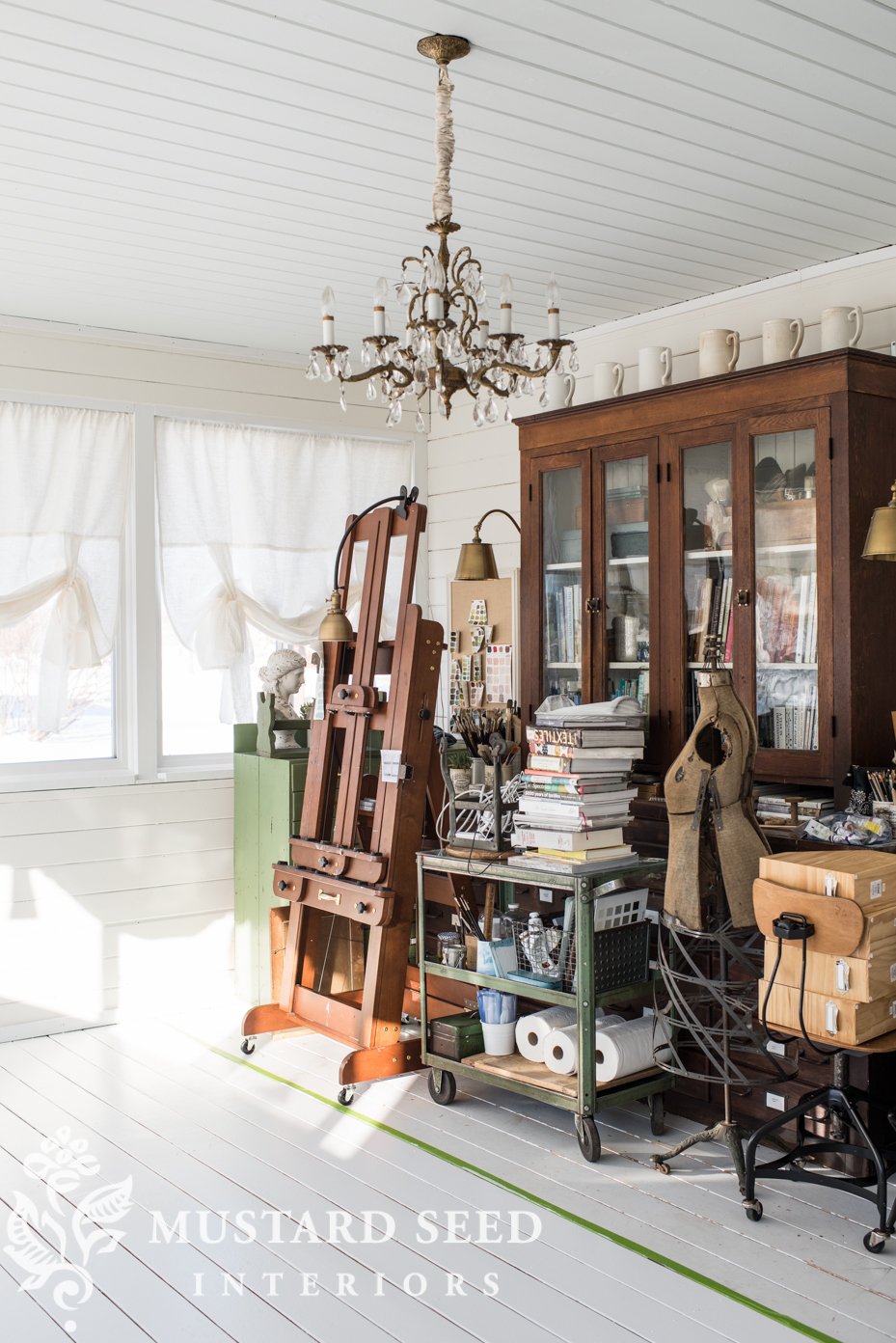 It looked so good with just the fresh coat of paint, but I knew painting a checkerboard pattern would make it really special.  It would be tedious, but I believed it would be worth it. 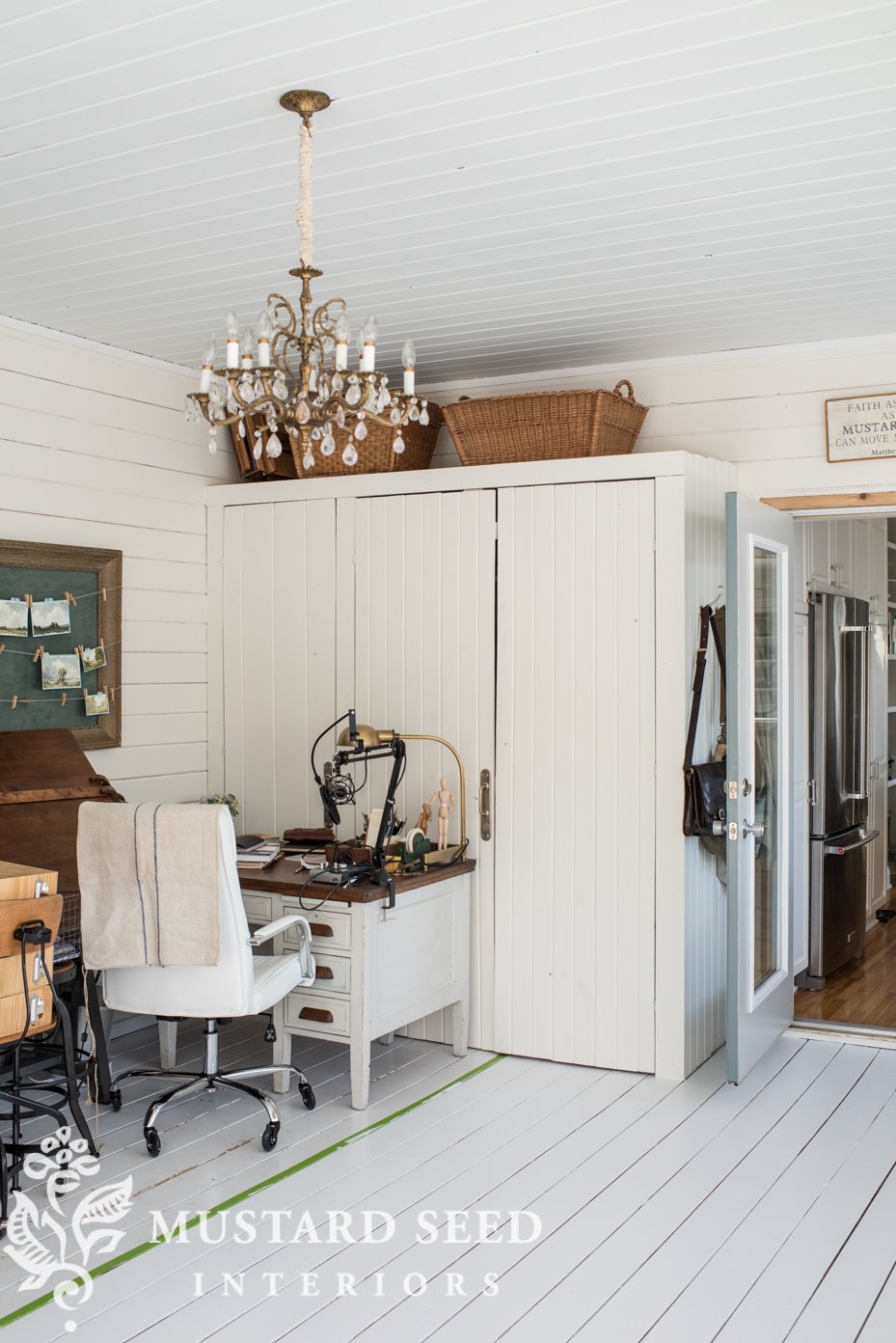 When the paint was dry and I opened the studio door, everyone wanted to be in the open space!  It was so funny.  At one point, all of the animals and both boys were in there, just sprawled on the floor. 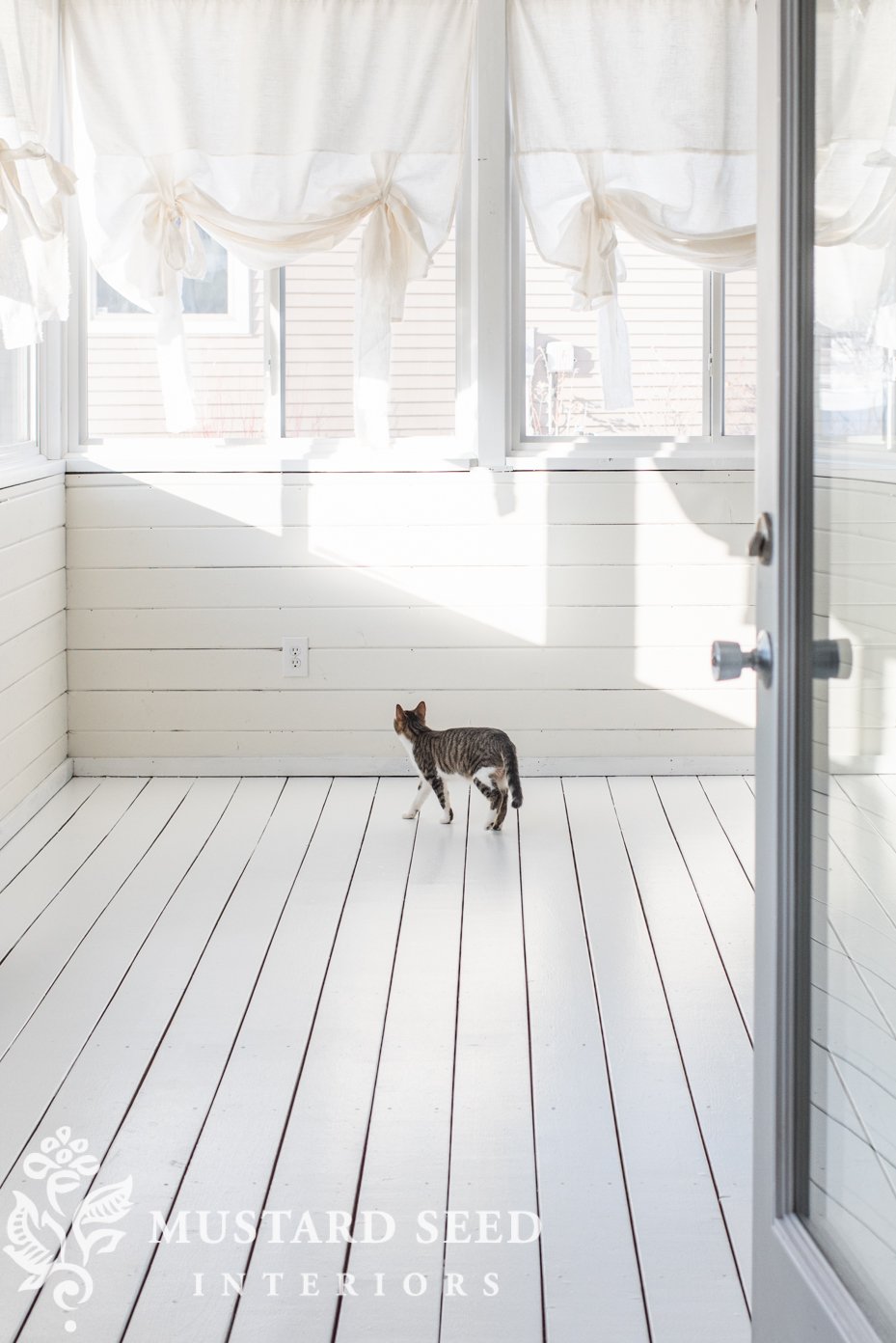 I cleared my schedule on Thursday to work on the checkerboard.  My original idea was to measure, mark, and tape, using the floorboards and a yardstick for reference.  Well, after taping down three squares and pulling them back up twice, I knew that wasn’t going to work.  It was too inconsistent.

(By the way, the cats were fascinated by the whole process and “helped” me or supervised or took a bath in the sun a lot!) 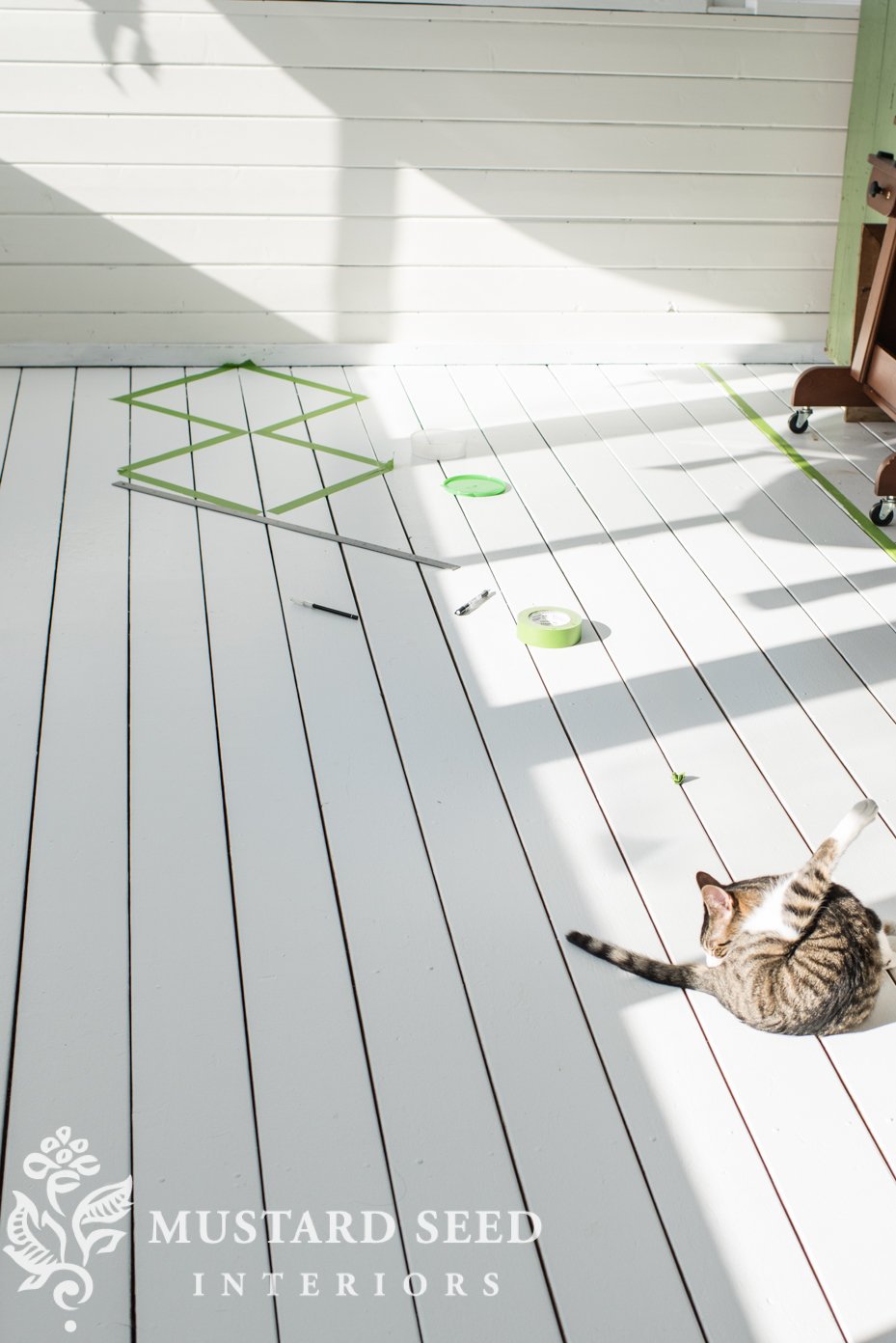 So, I changed my game plan and went to my go-to trick for consistency – making a custom template.  I do that for a lot of things…  hanging a curtain rod, cutting out a new seat for a chair, installing picture frame molding, etc.  I measured and cut a template out of black foam core board and used the lines created by the floorboards as chalk lines.  The key is to make sure the template is square.  In order to do that, I used a T-square.

And then the project was off and running. 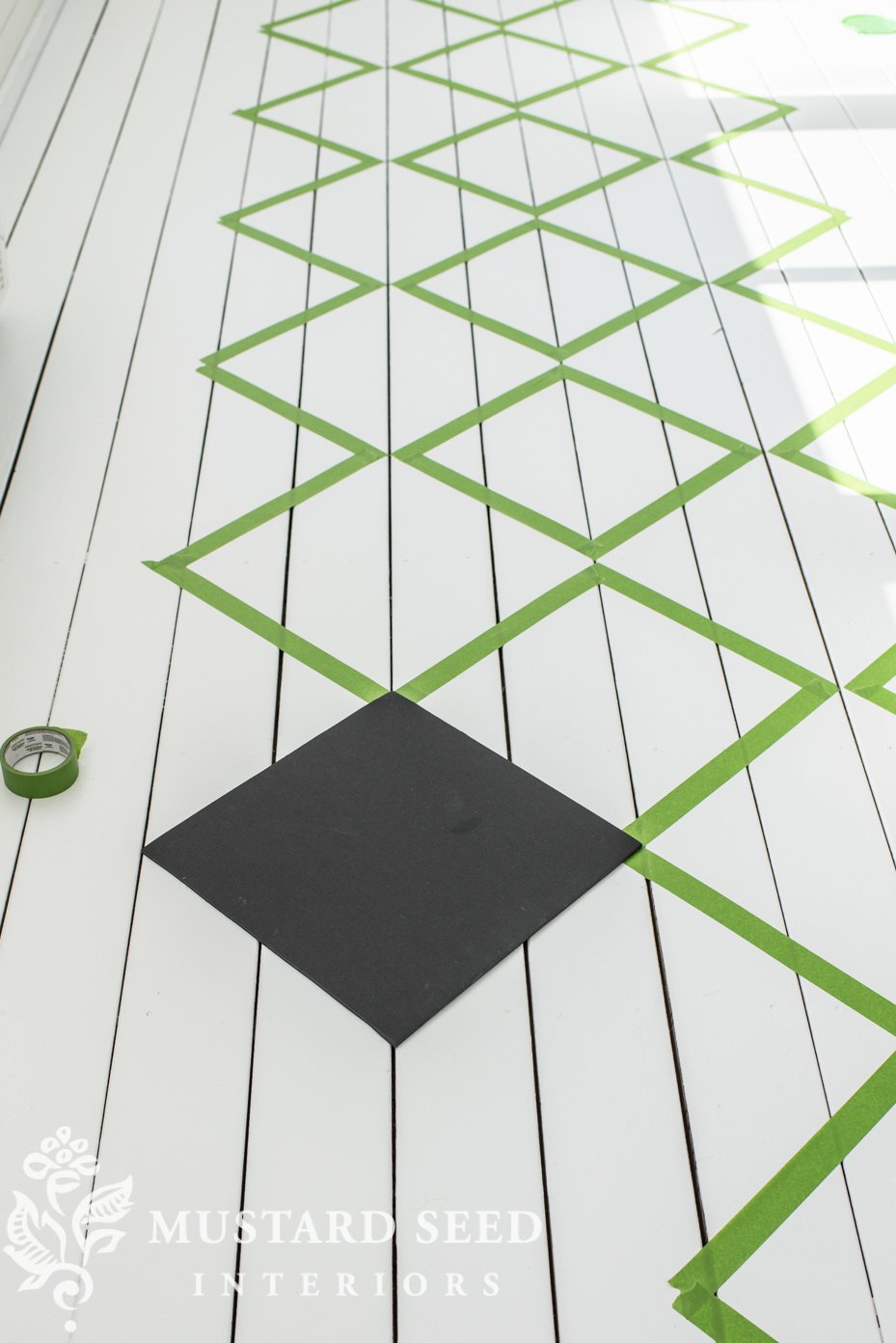 …apply Frog Tape around all sides… 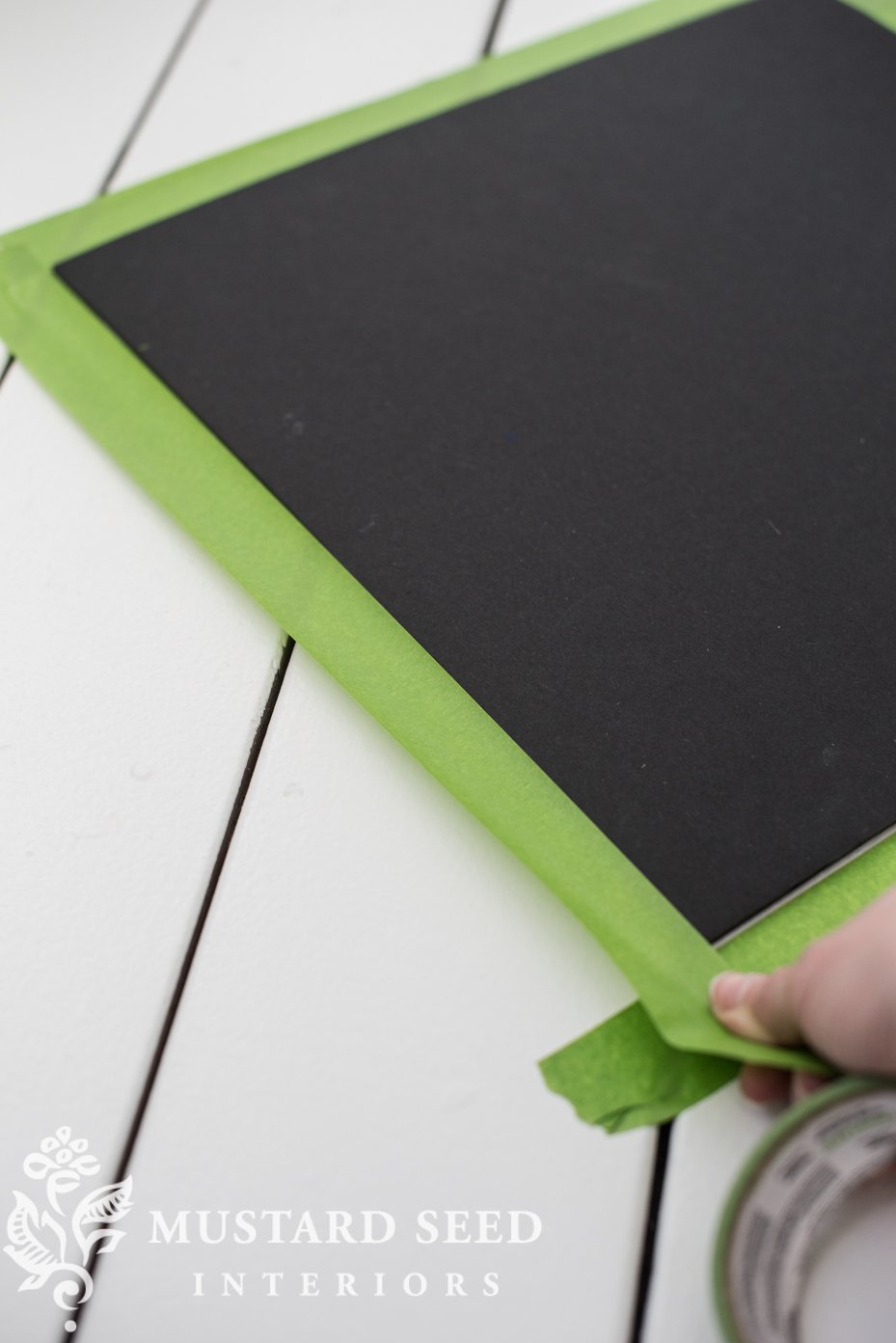 …and would cut the overlapping tape out of the squares I was painting with an Exacto knife. 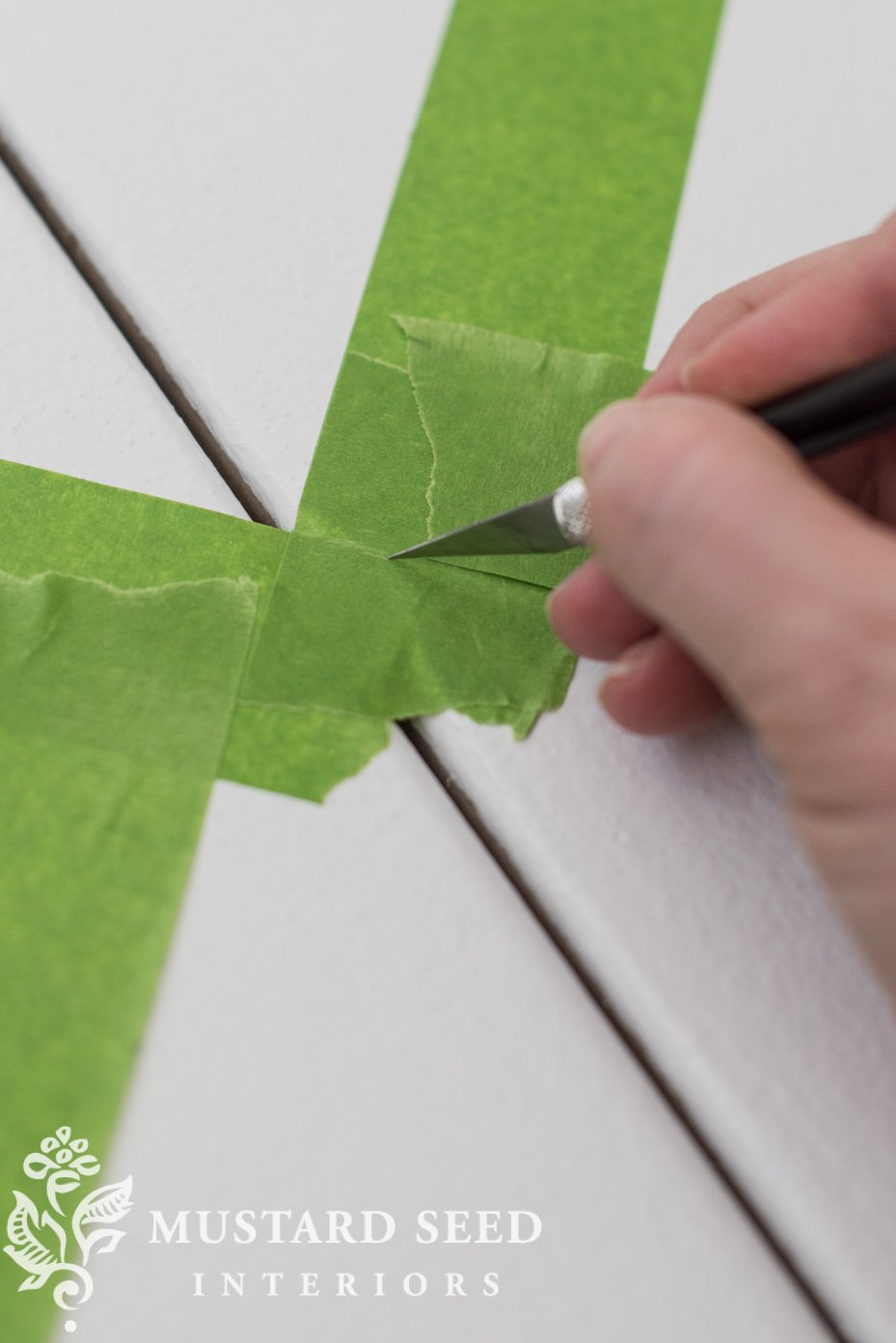 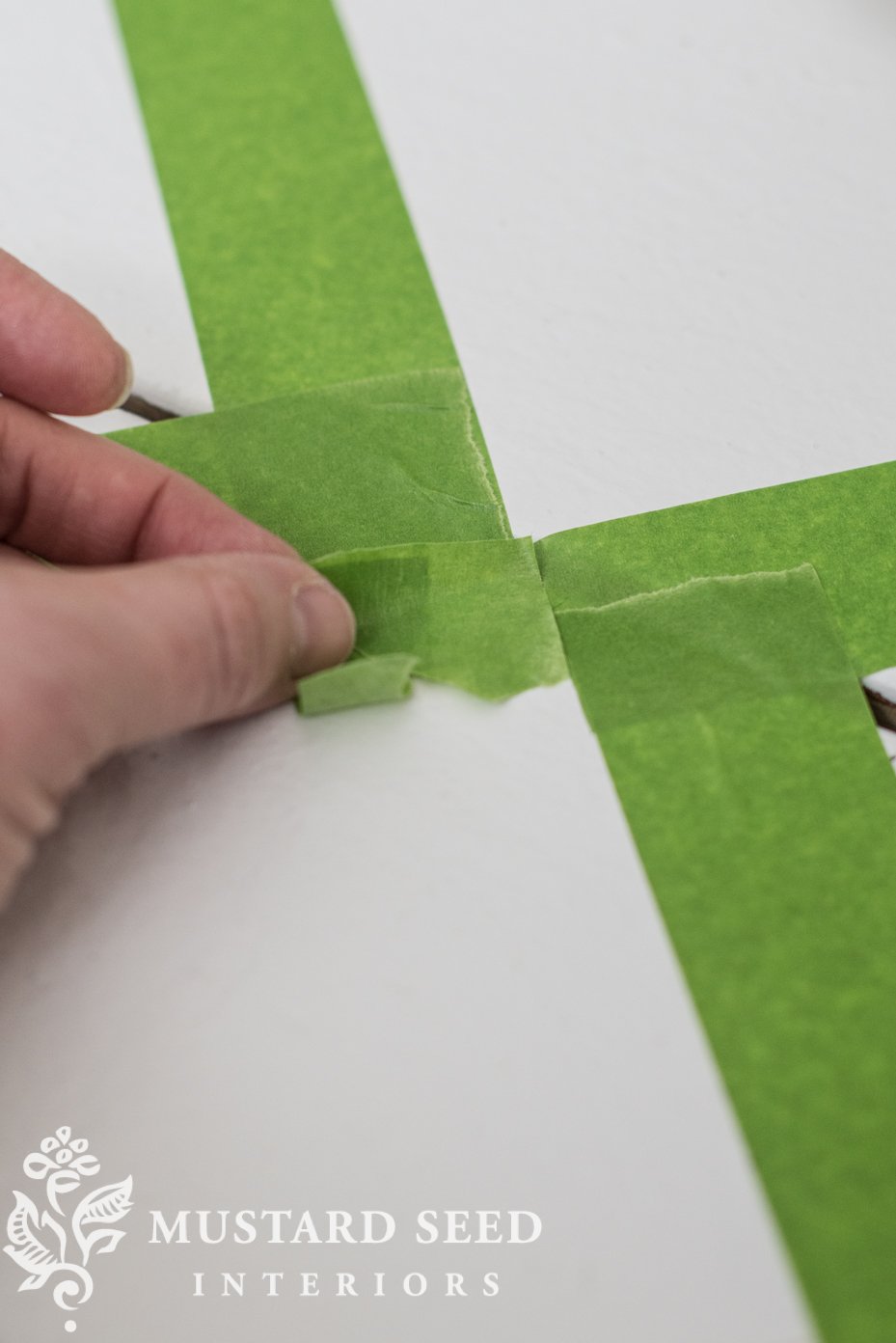 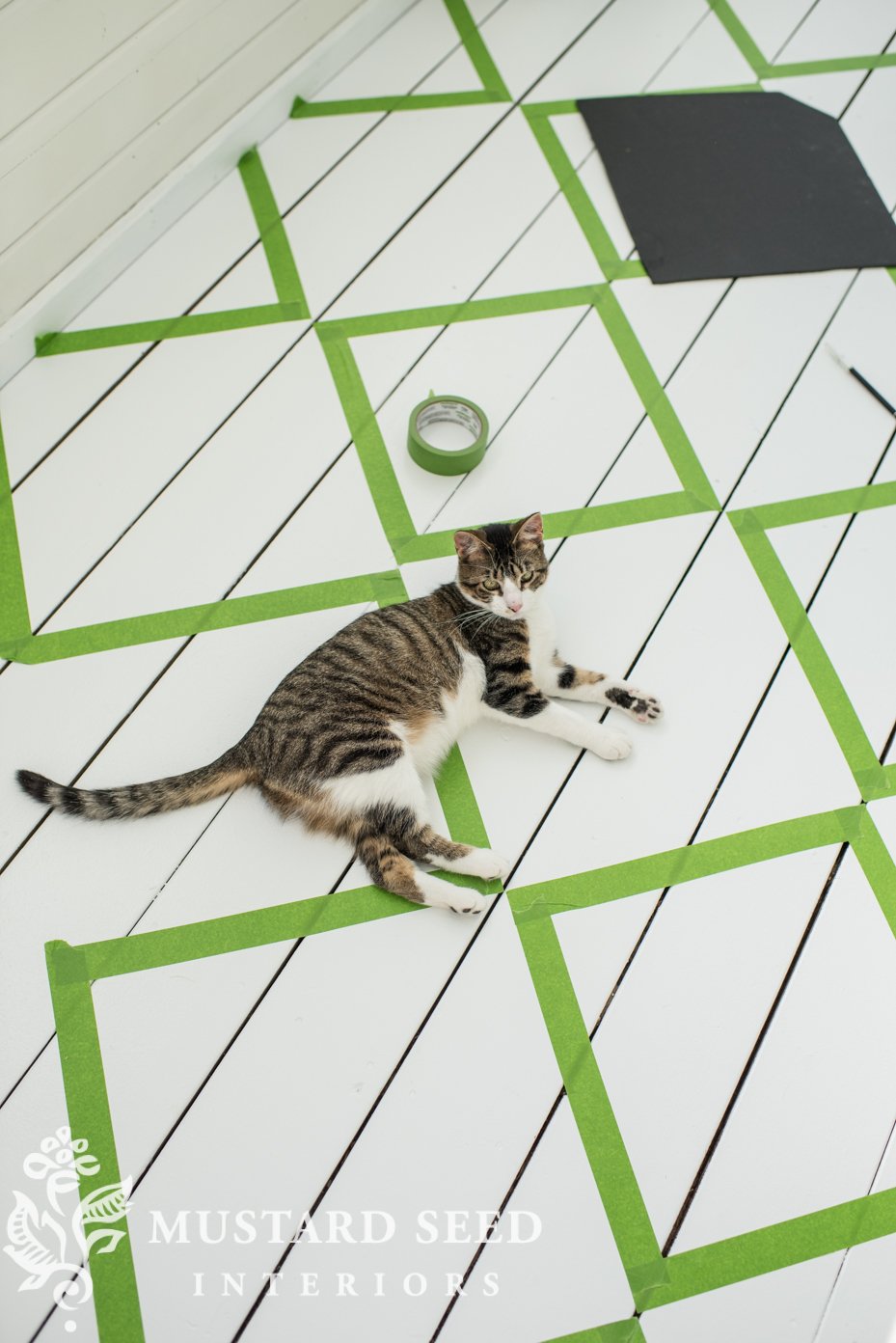 creating checkerboard floors | adjusting the template for the edges

The nice thing about the foam core board is that it’s very easy to cut and relatively inexpensive, so I could make templates that fit specifics areas.  I made one with a corner cut off for the squares along the right wall. 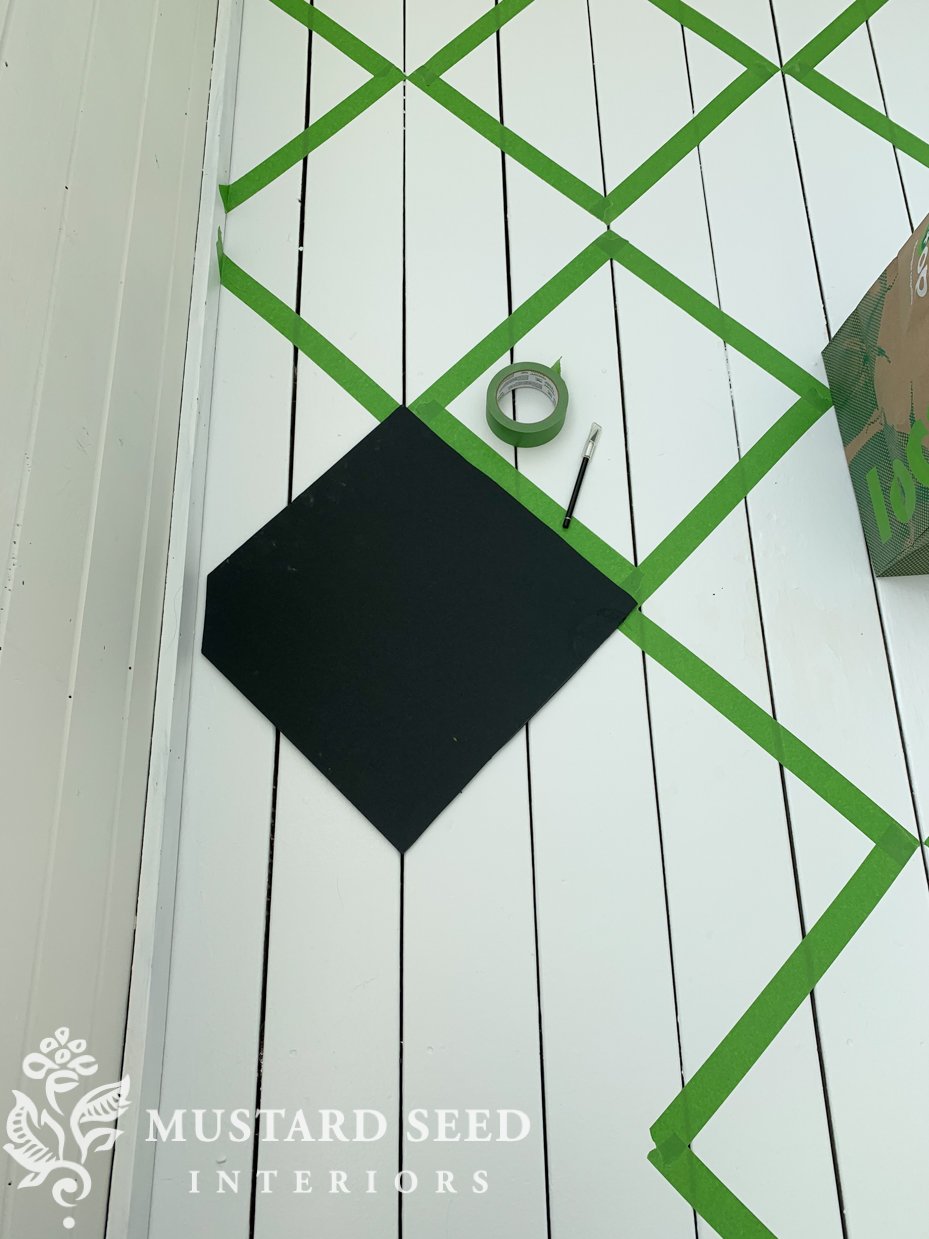 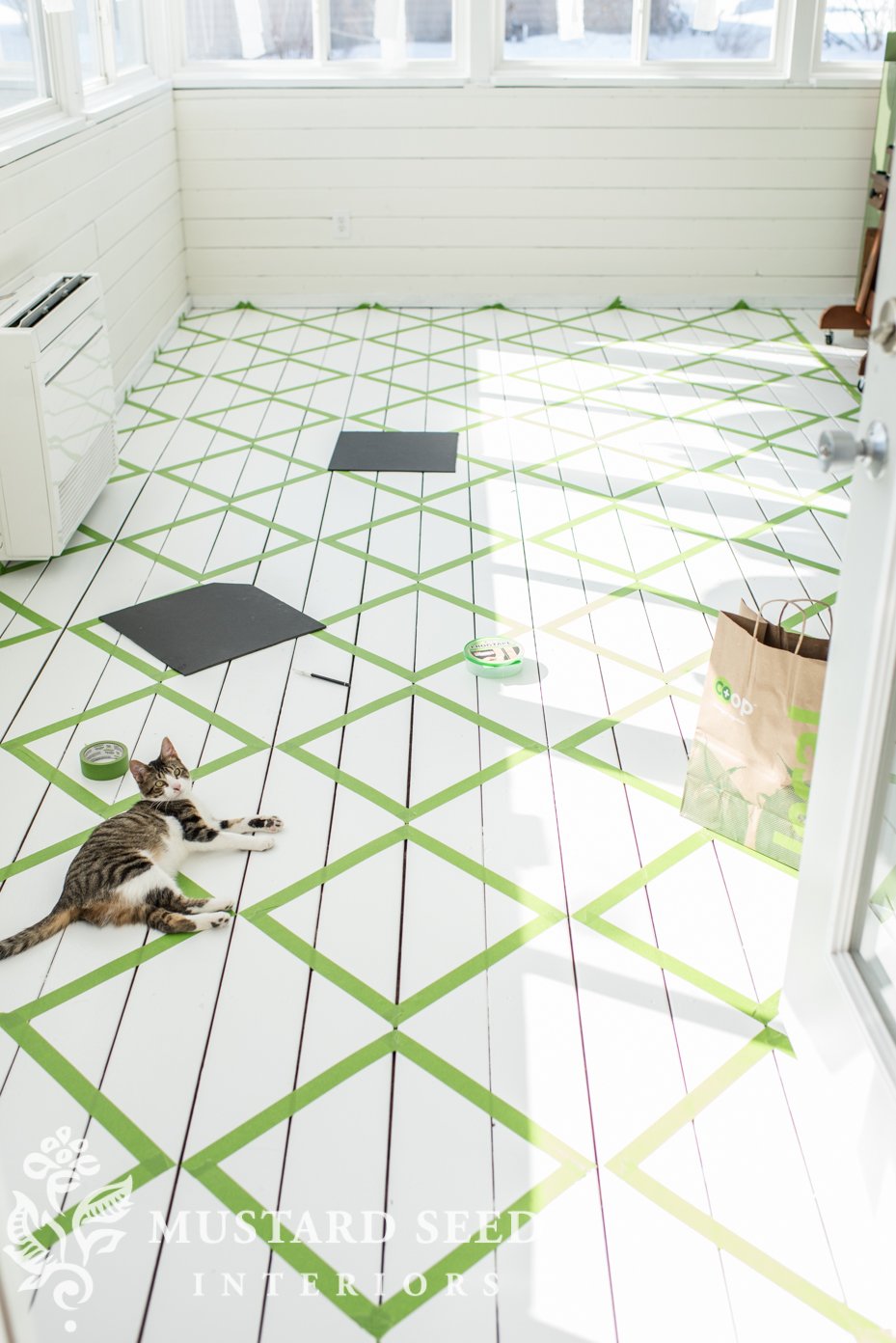 It took me about 3-4 hours to tape off the whole room, but that included the time I was trying to figure out the best way to do it!

In part two of painting checkerboard floors, I’ll share about the painting and tape-removal process…you can find that post HERE.