mixing a custom color & fixing too much chipping

The first thing I have to say about painting these two antique washstands is that I didn’t follow my own advice.

But, before we get into that, let me show you how the pieces looked before… 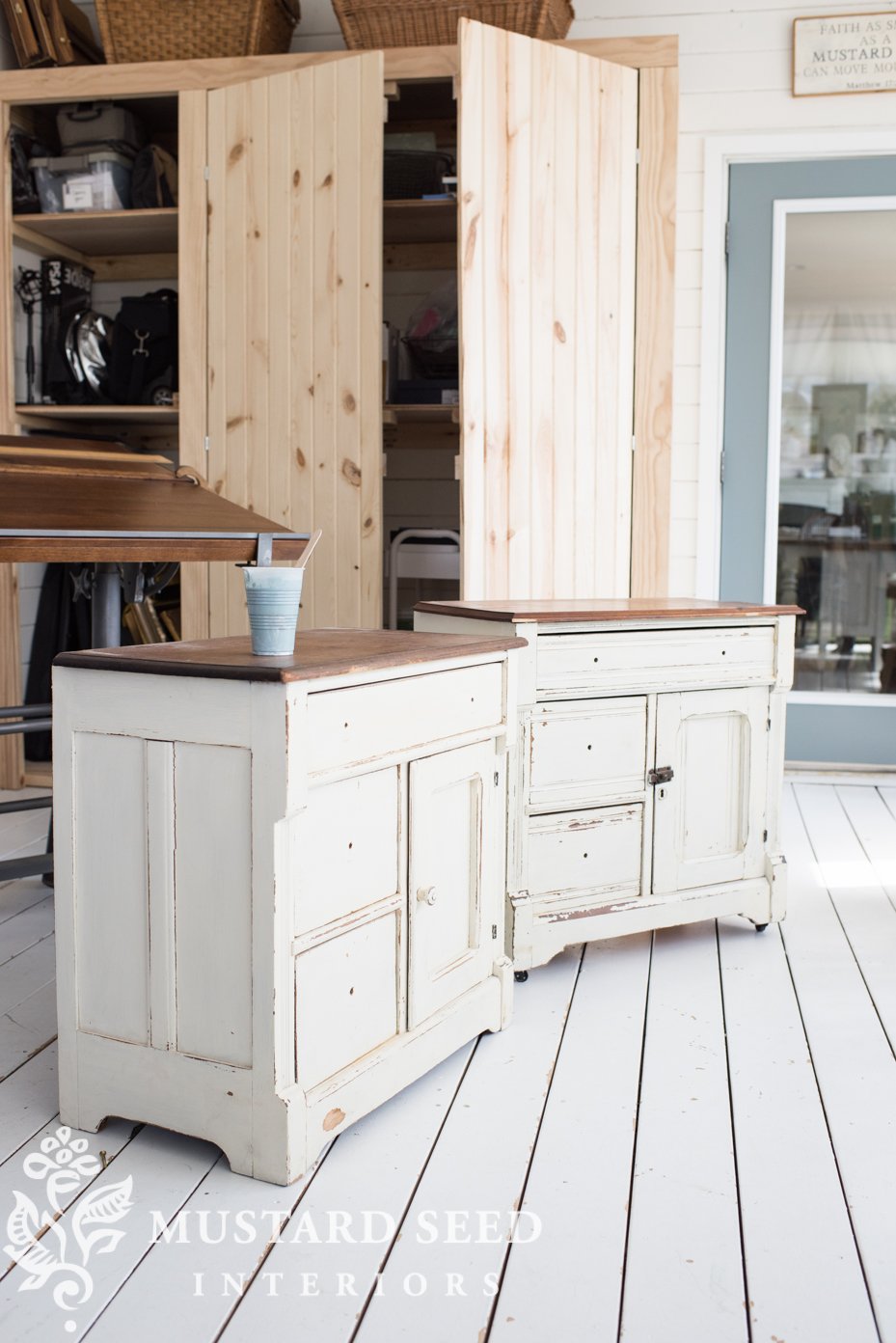 I painted these pieces in MMS Milk Paint in Linen a few years ago for our master bedroom in PA.  They were the perfect size for that long and narrow room, but they looked dinky against in our new home’s higher ceilings. 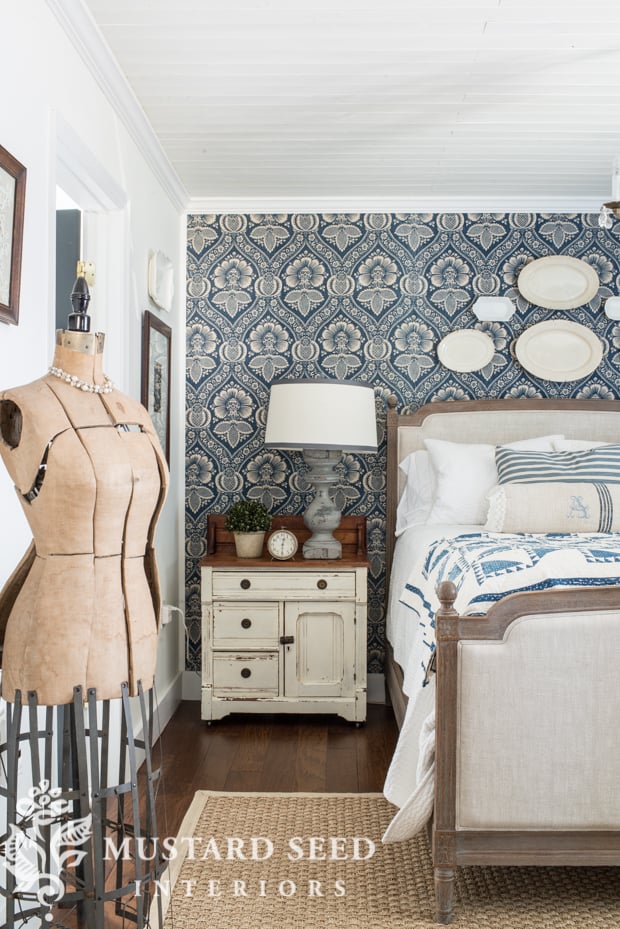 I knew I was going to sell them when I found replacements for them.  As I was working on the guest room, I found two dressers to flank the bed and that meant I needed to get this pair ready to sell.  I could’ve sold them as-is, but some of the paint rubbed off during the move and I felt like they could use some freshening up.  Chris, my Junk Bonanza booth-mate, is bringing a lot of blue pieces, so I decided to work with that (you know blue was such a stretch for me, but I went with it) and paint these two a custom-mixed blue.

When I’m painting a piece in a custom mix, I am a bit impatient about it.  I like to just mix the color on intuition and start painting.  I don’t like painting out swatches, waiting for them to dry, comparing colors, etc.  So, I mixed up a cup of a blue/green.  I knew if the color was off in any way, I could tweak the mix when I apply the second coat. 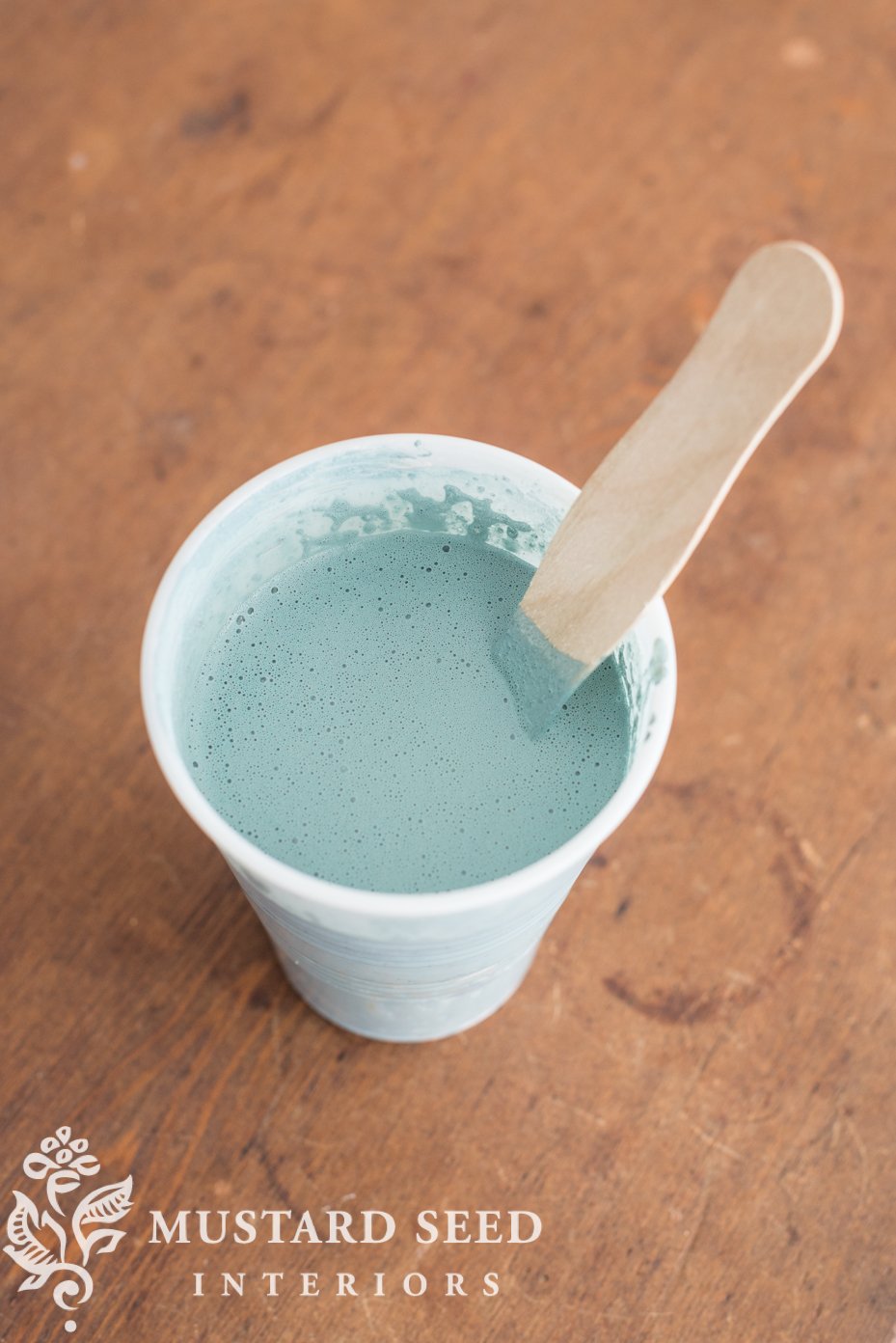 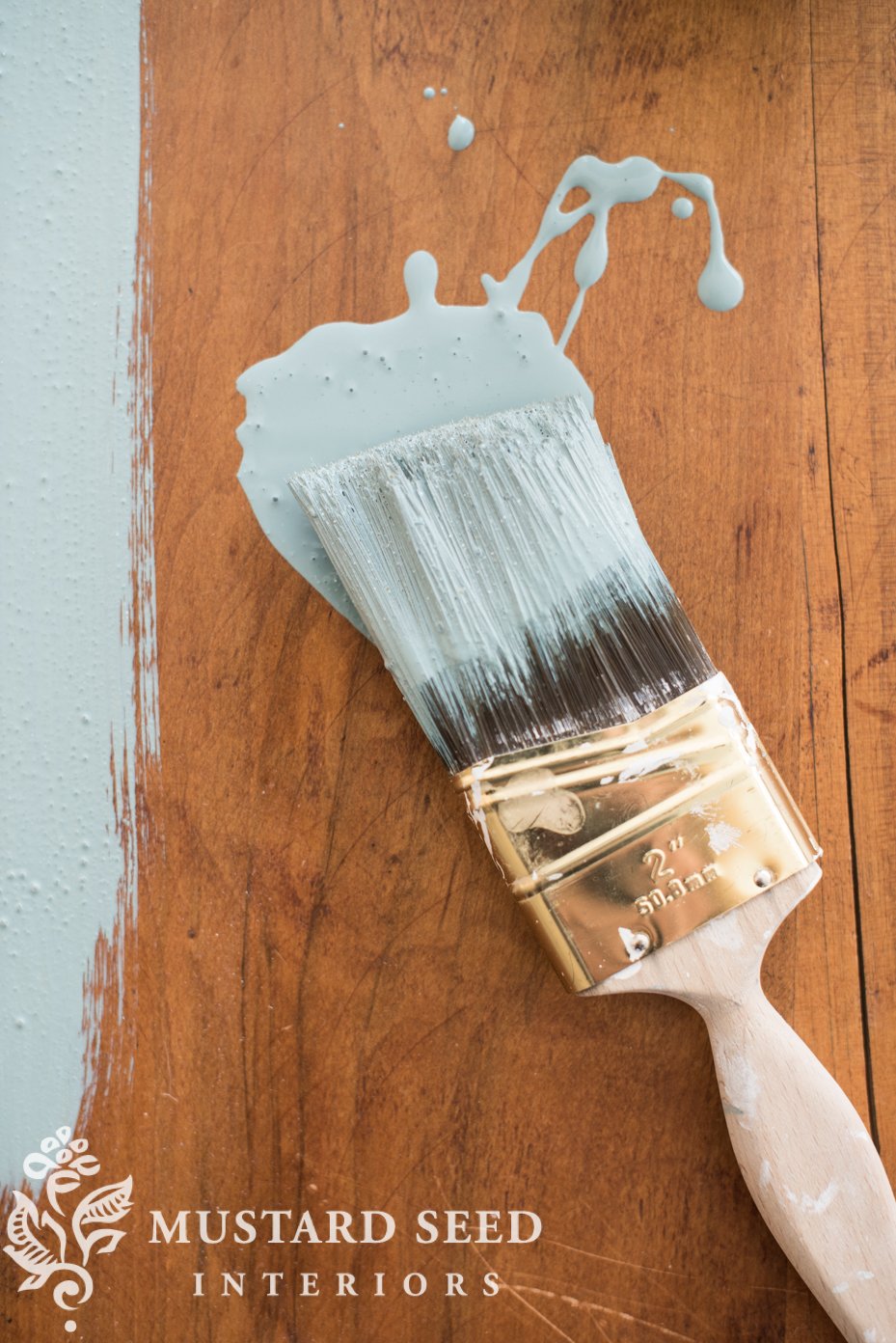 I had a feeling when I started brushing it on that it was going to be a bit bolder than I intended, but it was still a pretty color.  To show how much (or little) paint I used, this is what was left in the cup after putting a full coat on both pieces. 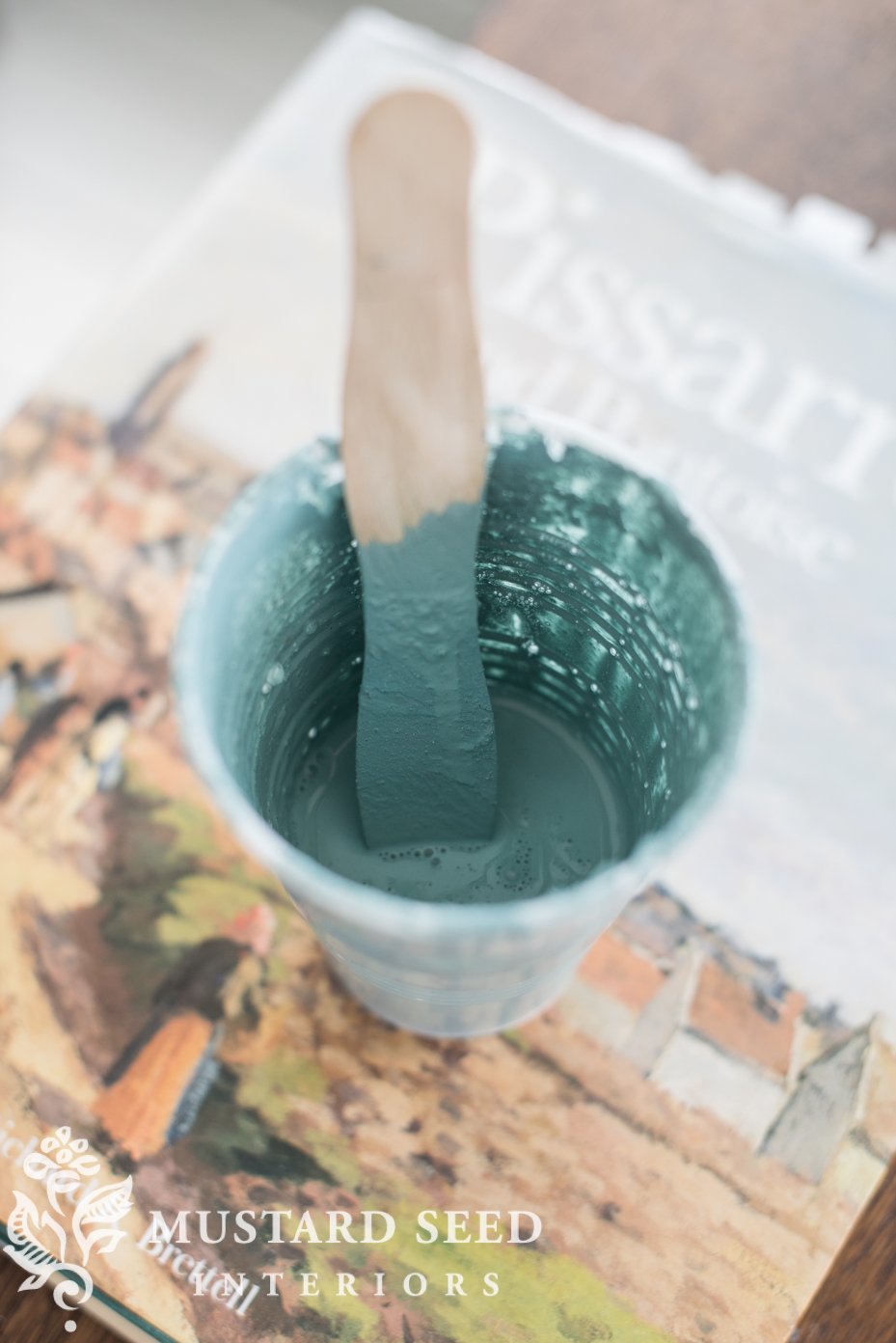 Once the paint dried, my gut feeling proved to be correct.  The color was too strong for what I envisioned.  So, I added some Trophy (to gray the color) and Linen (to lighten it and warm it up) to the paint remaining in the cup. 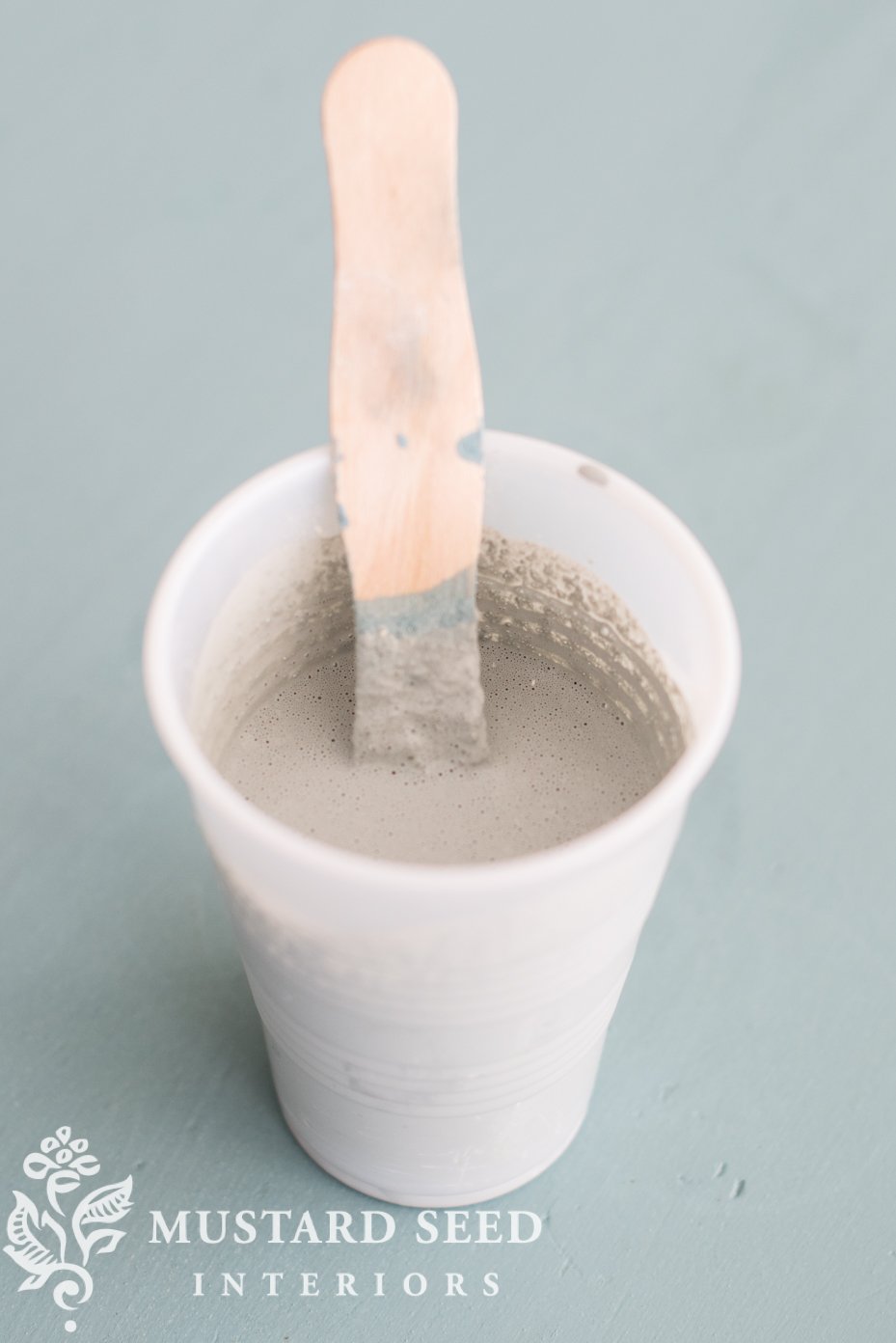 But once it was brushed on the piece and dried, it was the pretty pale blue I envisioned… 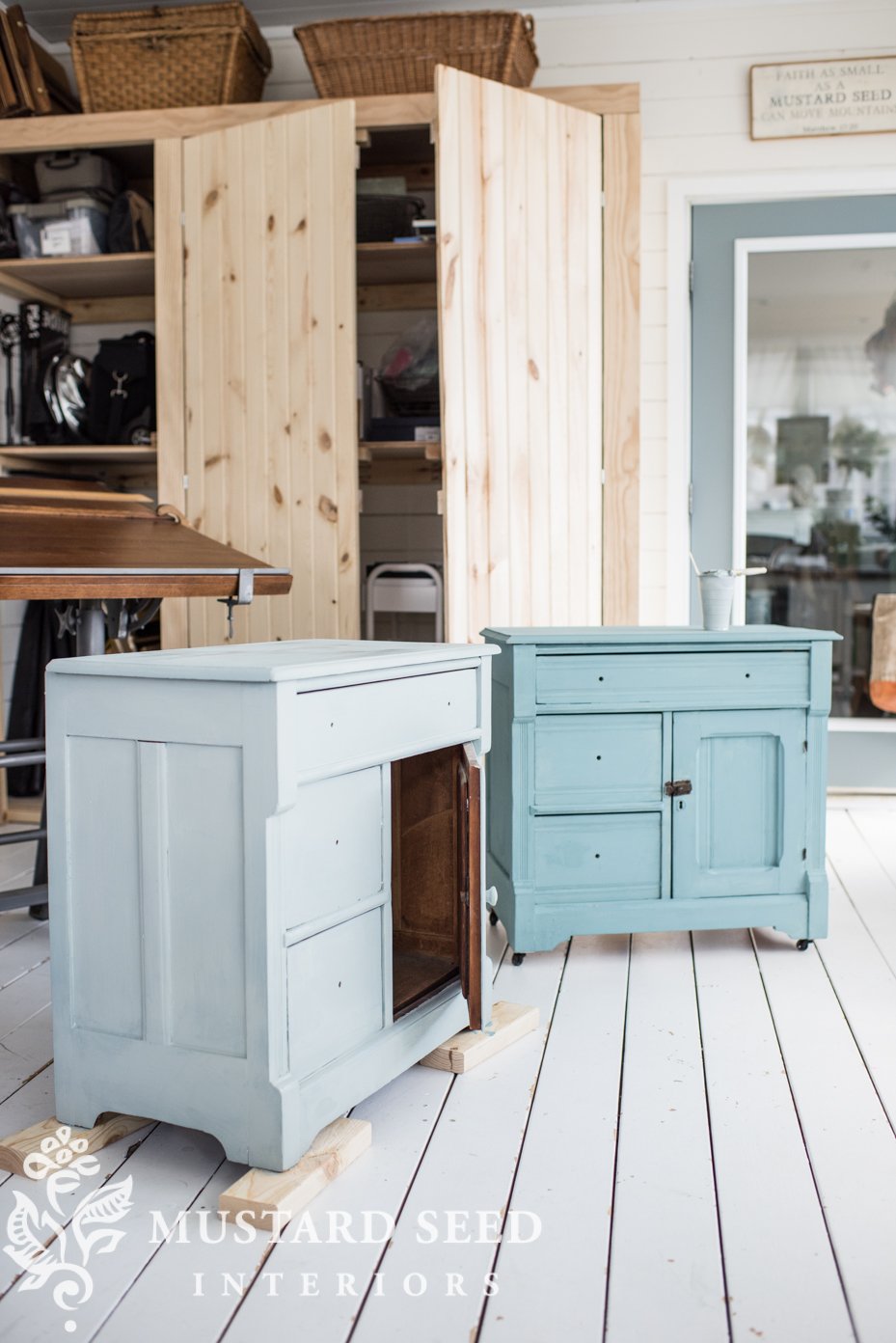 Since this color was mixed into the remnants of an already mixed custom color, I decided to make it again, so I could share the recipe.  The recipe for the second custom color is: 1 pt Trophy + 1 pt Kitchen Scale + 1 pt French Enamel + 2 pts Mora + 4 pts Linen.  I know that’s a complicated recipe, but it would be a great way to use up excess milk paint from other projects or even use sample packs.  I made the mix with 1 tablespoon measurements and that was enough to paint these two pieces. 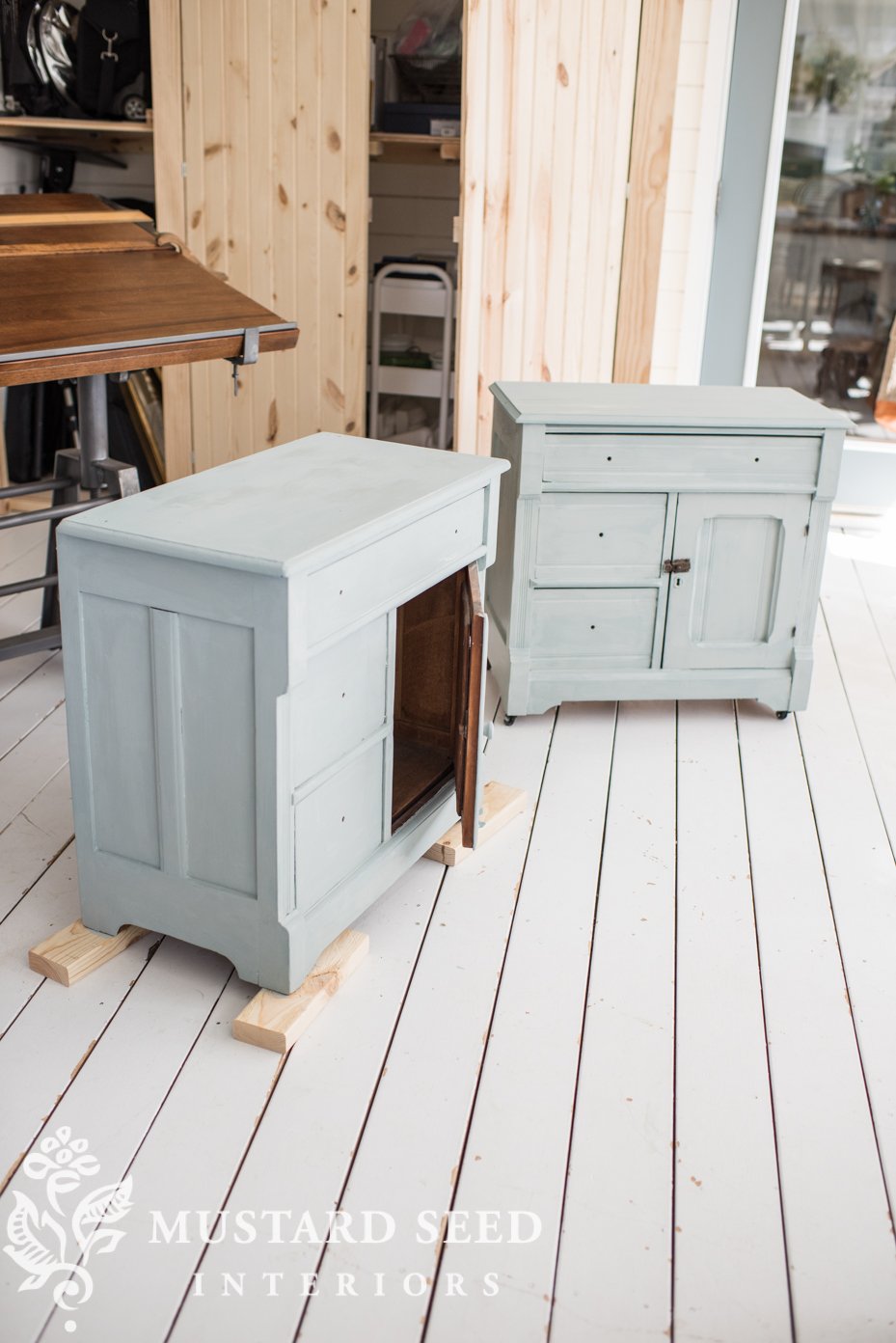 Now we get to where I didn’t follow my own advice.

In my workshops and demos, I always suggest giving a piece a light sanding prior to painting.  It typically takes less than 15 minutes and it helps a lot with adhesion.  Well, I didn’t do it.  I did it when I painted these pieces the first time, but I didn’t bother sanding this time.  I just went right into painting and the milk paint didn’t stick well to tops, which were an unsanded, hemp oiled-surface. 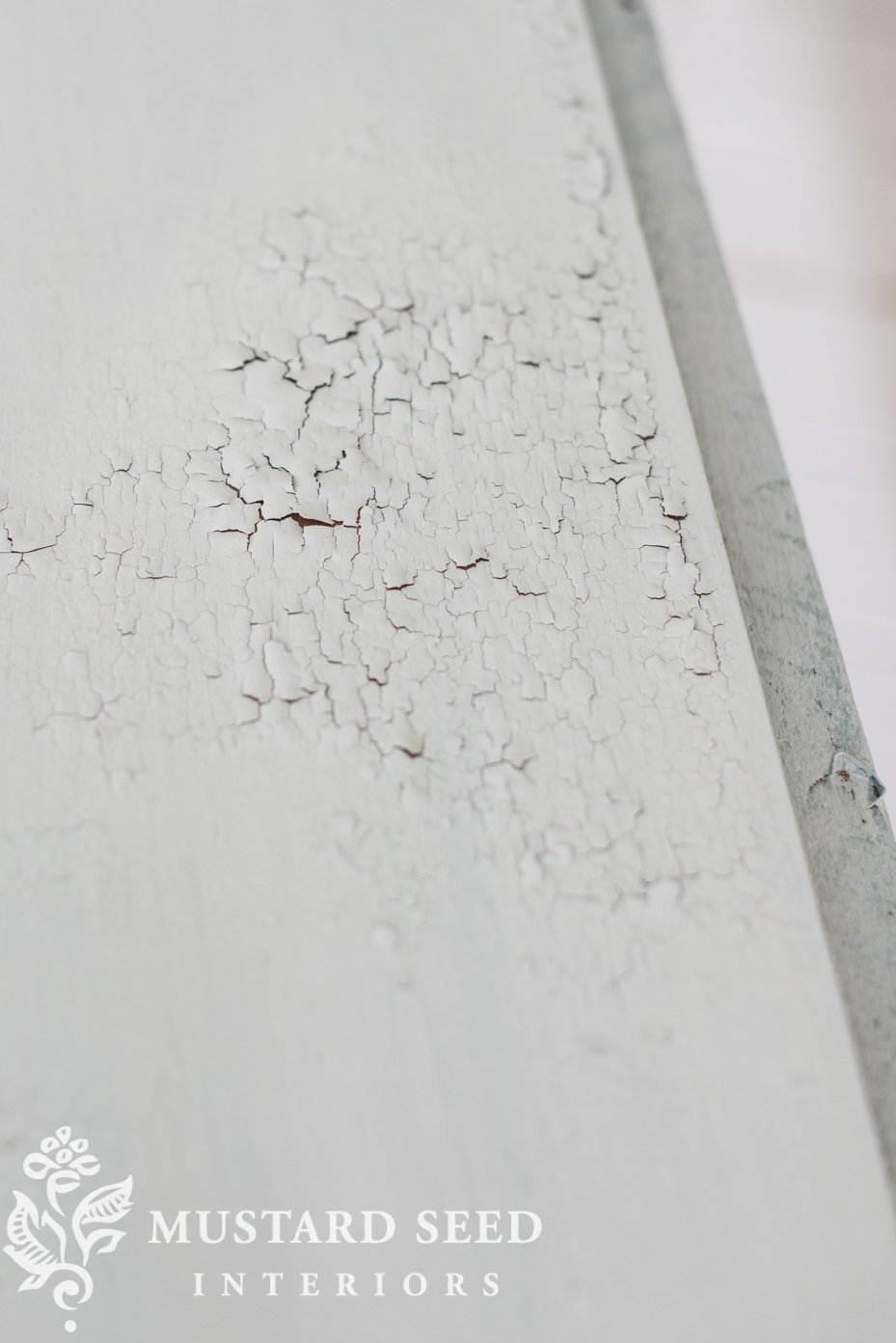 But, it gives me the chance now to share how to fix it when a piece chips too much for your liking.

I sanded it with 60 grit paper to remove all of the loose paint and then to rough up the surface to give it tooth (something for the paint to grip.) 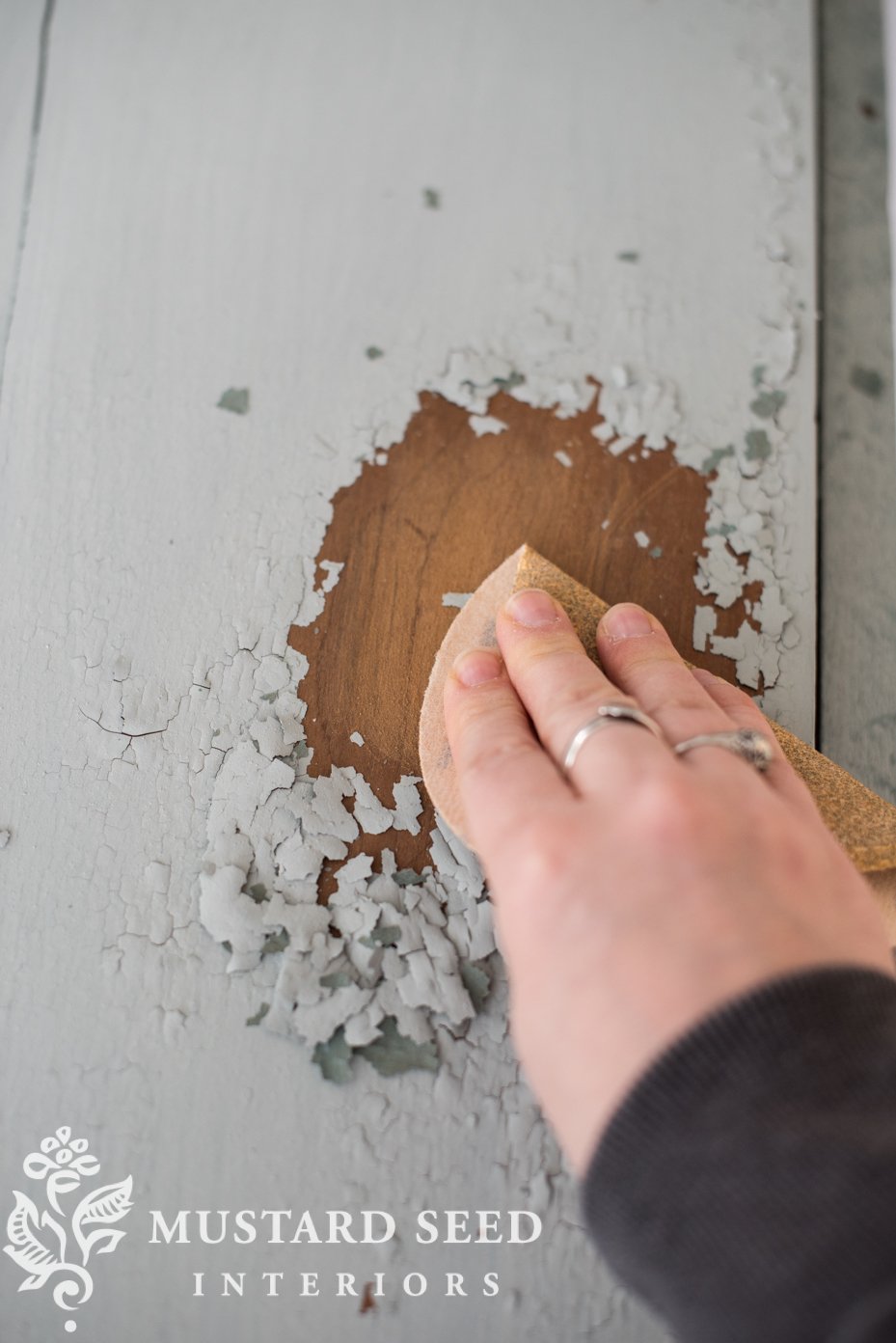 I started sanding by hand, but I finished up with the palm sander, so I could rough it up quickly and thoroughly. 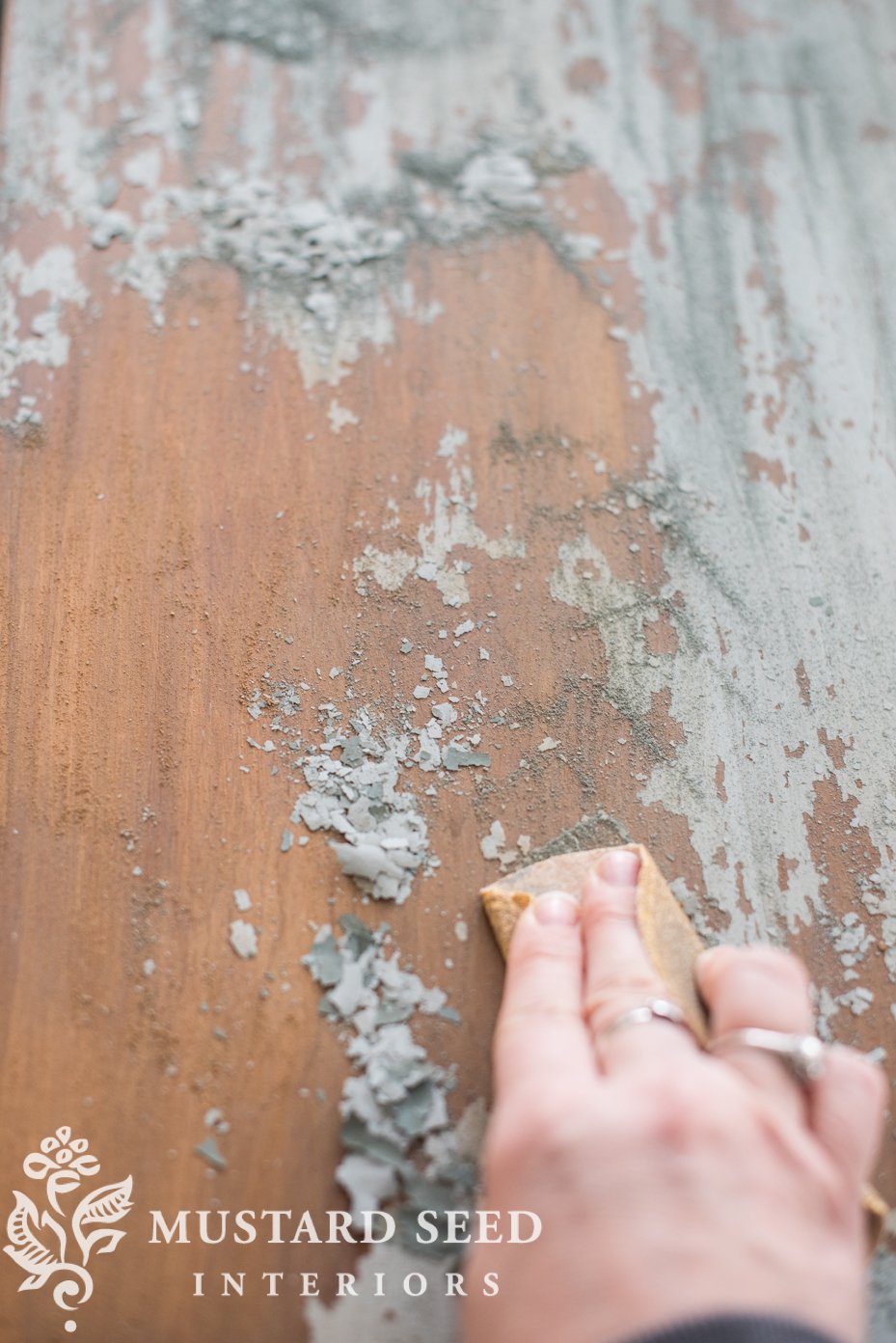 I vacuumed off the dust and chipped paint and then painted on another coat.  It stuck like a champ. 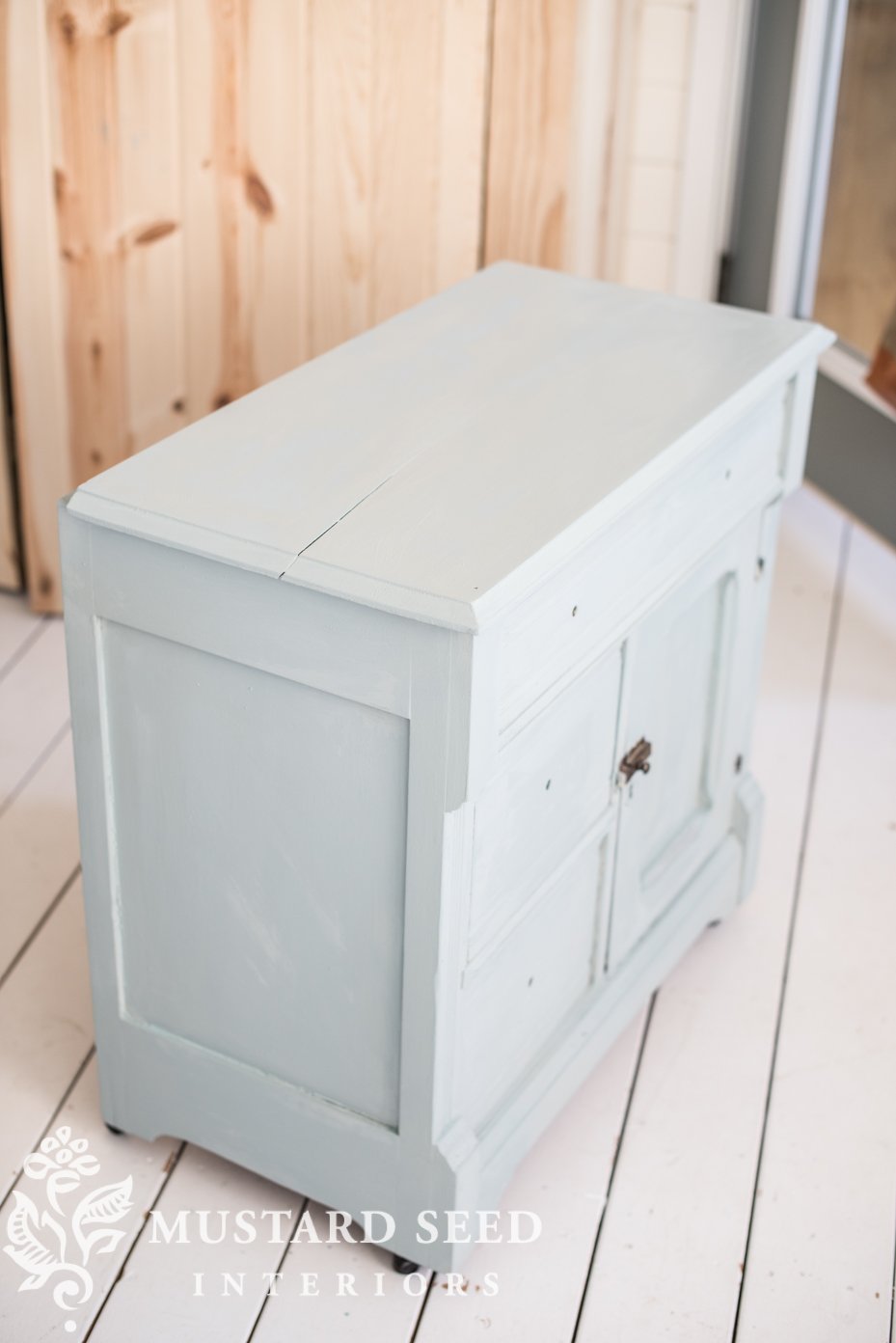 Had I taken the five minutes to sand the tops in the first place, it would’ve saved me having to sand and repaint, which can be annoying.  I could’ve added Bonding Agent, too, but I preferred the look of Milk Paint on its own for these pieces.  It’s just a personal taste thing, though, not a right or wrong choice.

I finished them off with Tough Coat to provide durability and to seal a few areas where there was some great crackling and crazing.

Also, if you’re into furniture makeovers and milk paint, I’d like to invite you to join our “move mountains with milk paint” group on Facebook.  We launched the group a few weeks ago and it’s been such an awesome place to hang out.  I’ve been inspired by all of the beautiful pieces people are creating with our products.  We share exclusive tips and tutorials from retailers, host a Furniture Feature Friday “party”, and share our weekend DIY & furniture rehabbing wins each week.

You can click HERE to find the group and ask to join.