Last week was the first week that I felt like I was settling into a new routine.  The previous weeks were about figuring out this new normal…the stress of feeling like I’m bringing toxic waste into the house when I order groceries or check the mail, the struggle of learning how to do school from home, the worry of the unknown, trying to sleep after reading the news.  I know so many of you can relate to the upheaval.

But, I’m settling now, just as one would after a move or starting a new job, having a baby, or some other life-changing event.

I’ve grown used to having groceries delivered and wiping them all down before bringing them into the house.  The boys have gotten into their own routine and have been doing schoolwork with more independence.  We’ve been able to treat ourselves with one outing to Home Depot to get plants and ordered curbside pick-up from Olive Garden for a combined celebration of Mother’s Day and Jeff’s birthday.  I’m reading the news less.  And I’m much more at peace with the fact that we just need to take things one day at a time.  I don’t need to have next month’s questions answered today.

I’ve started filling out my planning sheets again and my schedule isn’t as subject to unexpected changes popping up during the day.  And work, for me, has felt surprisingly normal.  I’m still writing, working on projects for clients, recording podcasts, editing video, making things.  If anything, I’ve been feeling even more creative and productive over the past couple of weeks.

This has led to a longer idea & to-do list, which is both awesome and overwhelming.  So, I’m just trying to work through one thing at a time, bouncing between artistic work, home projects, writing, photography, and chipping away at future projects.

Friday was an open day for me without any appointments except for my 2:00 live painting class, so I worked on upholstering the bed in the sewing room and painting scrap pieces of plywood to use as backdrops for photoshoots and still life vignettes.  I’ve been wanting to do both for a long time, so I pinned myself down.  I’ll share about the bed in another post, but the backdrops turned out great! 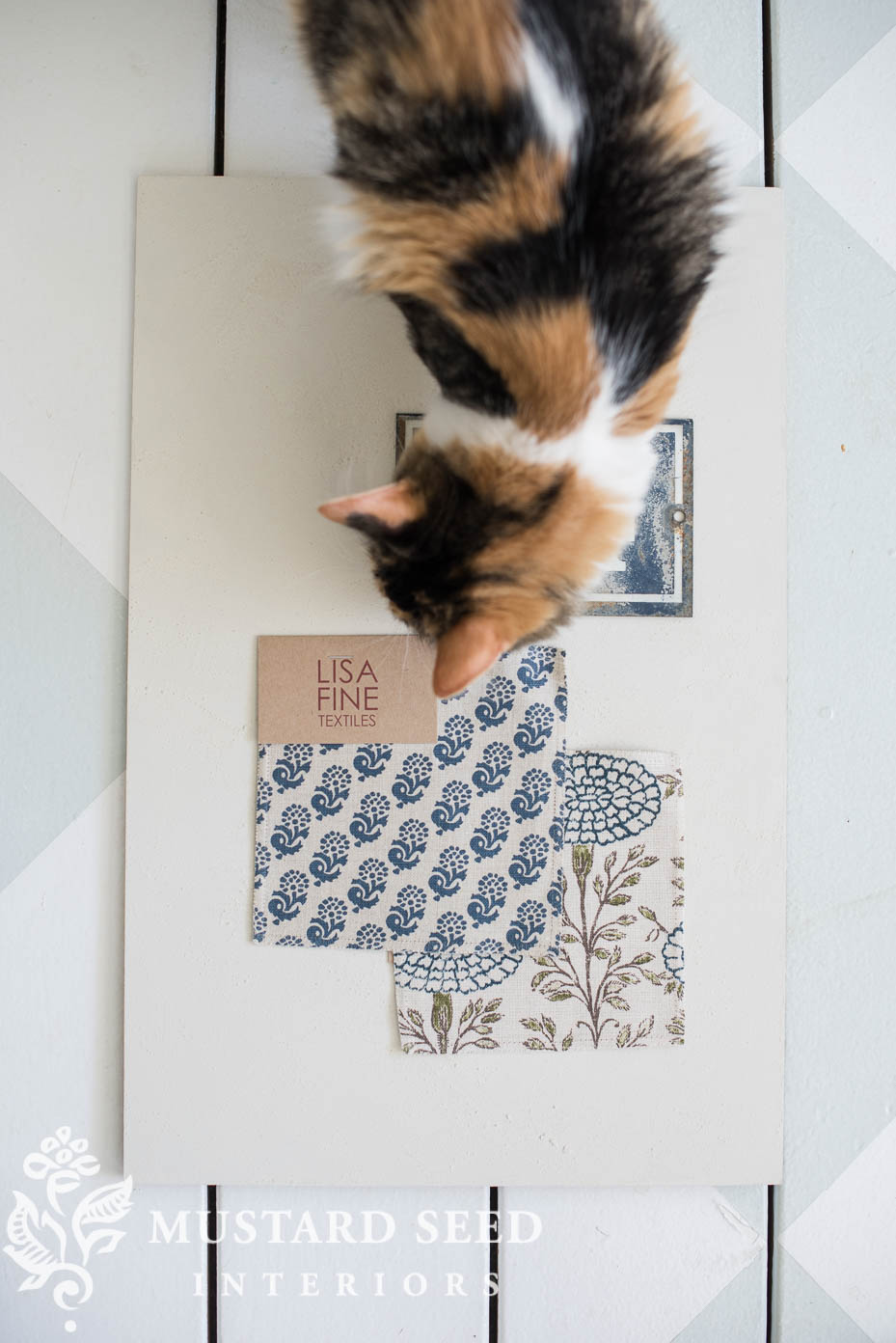 I painted them in various shades of Miss Mustard Seed’s Milk Paint including Farmhouse White, Aviary, the “custom vintage chalkboard mix“, and a few other custom-mixed blue/grays.  And then I took some time to take pictures of them.  I will show you how the others turned out in another post.  This is the vintage chalkboard one… 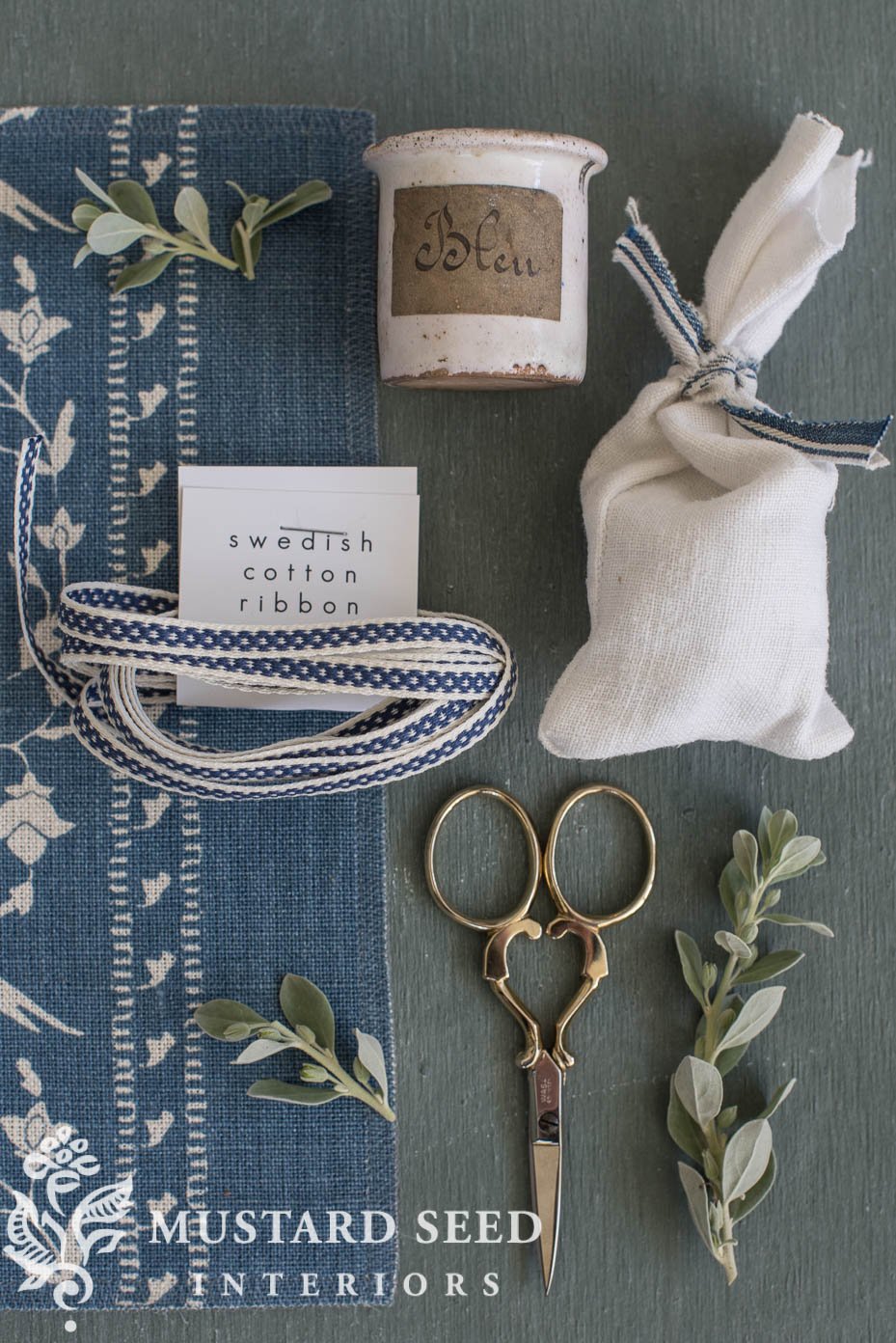 They are going to be so fun to use and I will probably make some more. 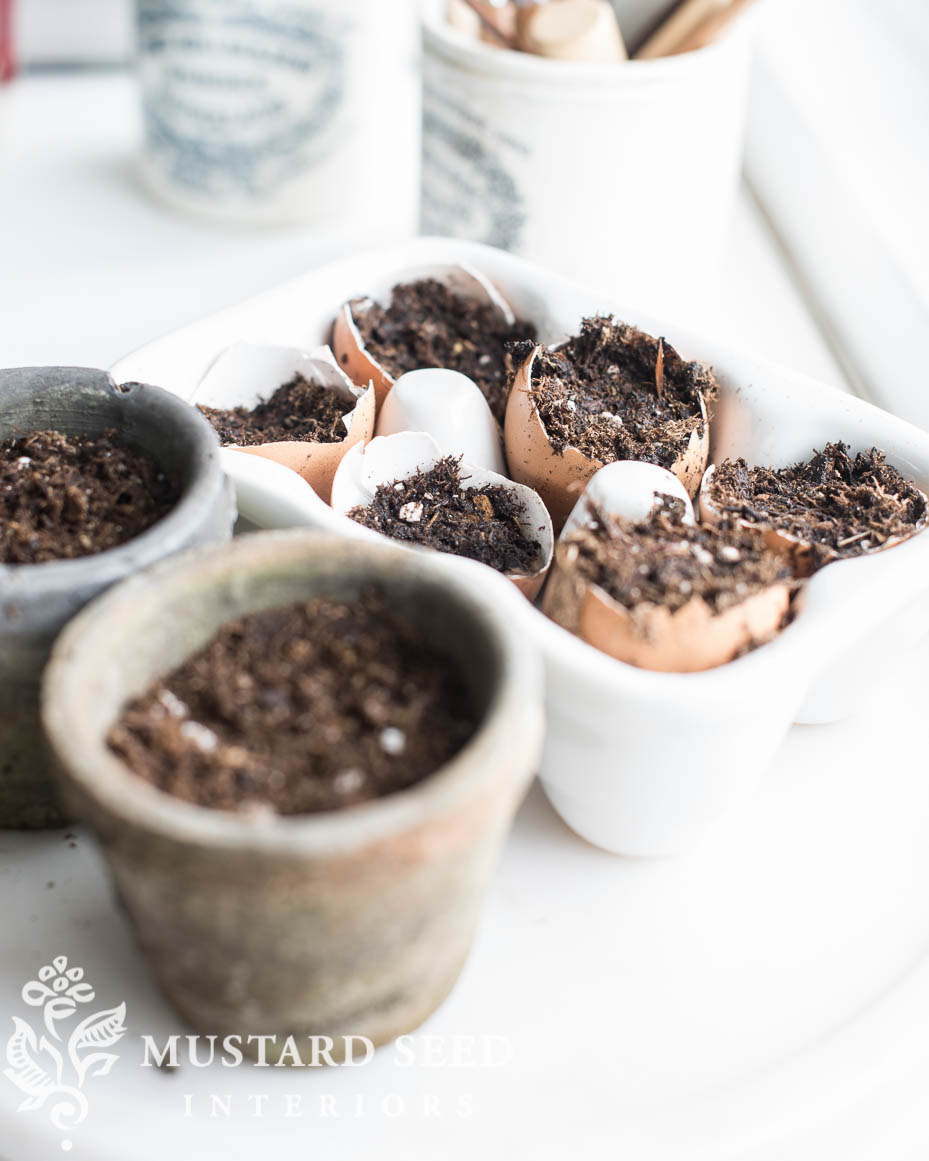 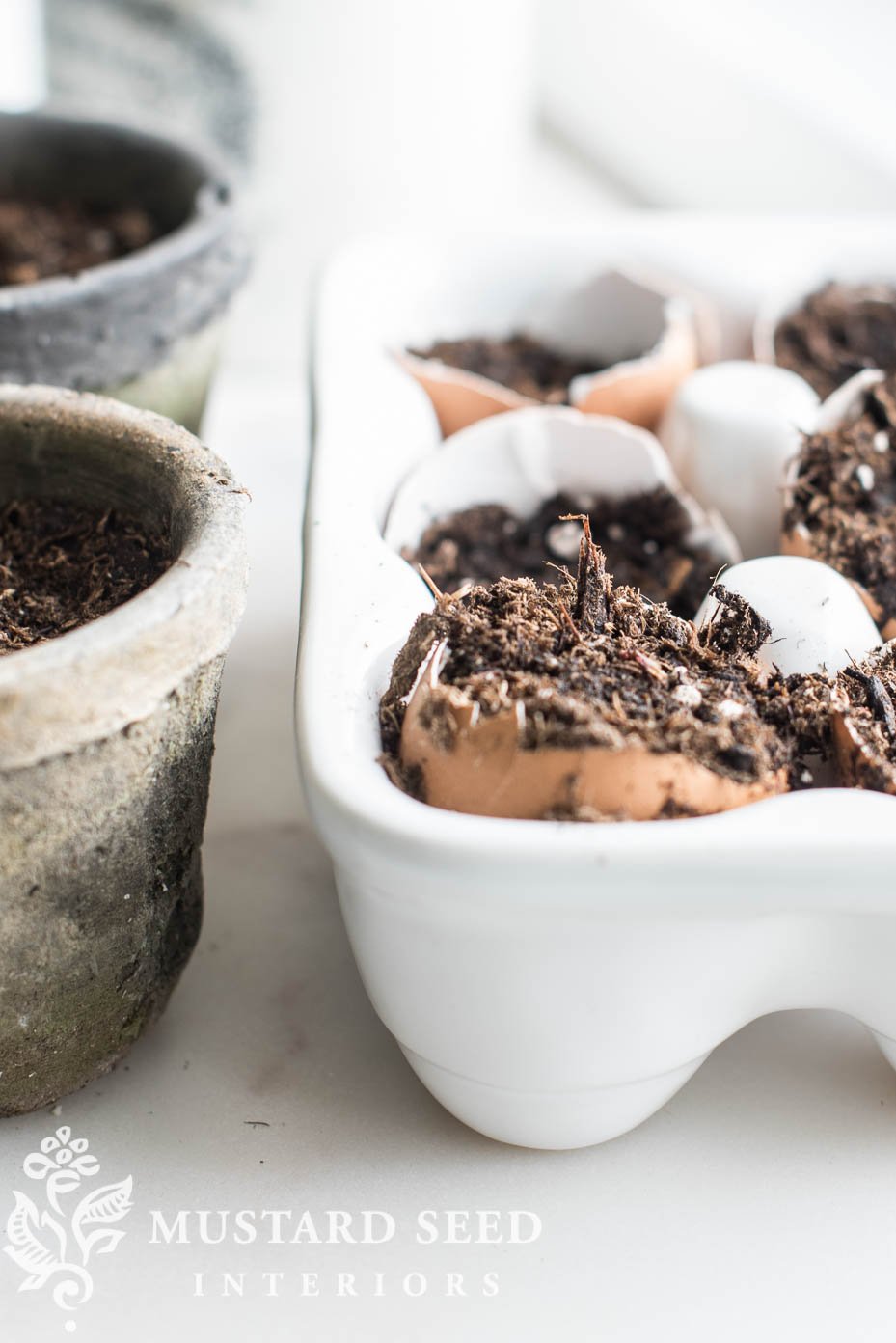 We’ve been having freezing temperatures at night, so I’ve kept them in my studio in their own little greenhouse.  The kitties have been very interested in them, so the cover is also protecting curious paws from upending them! 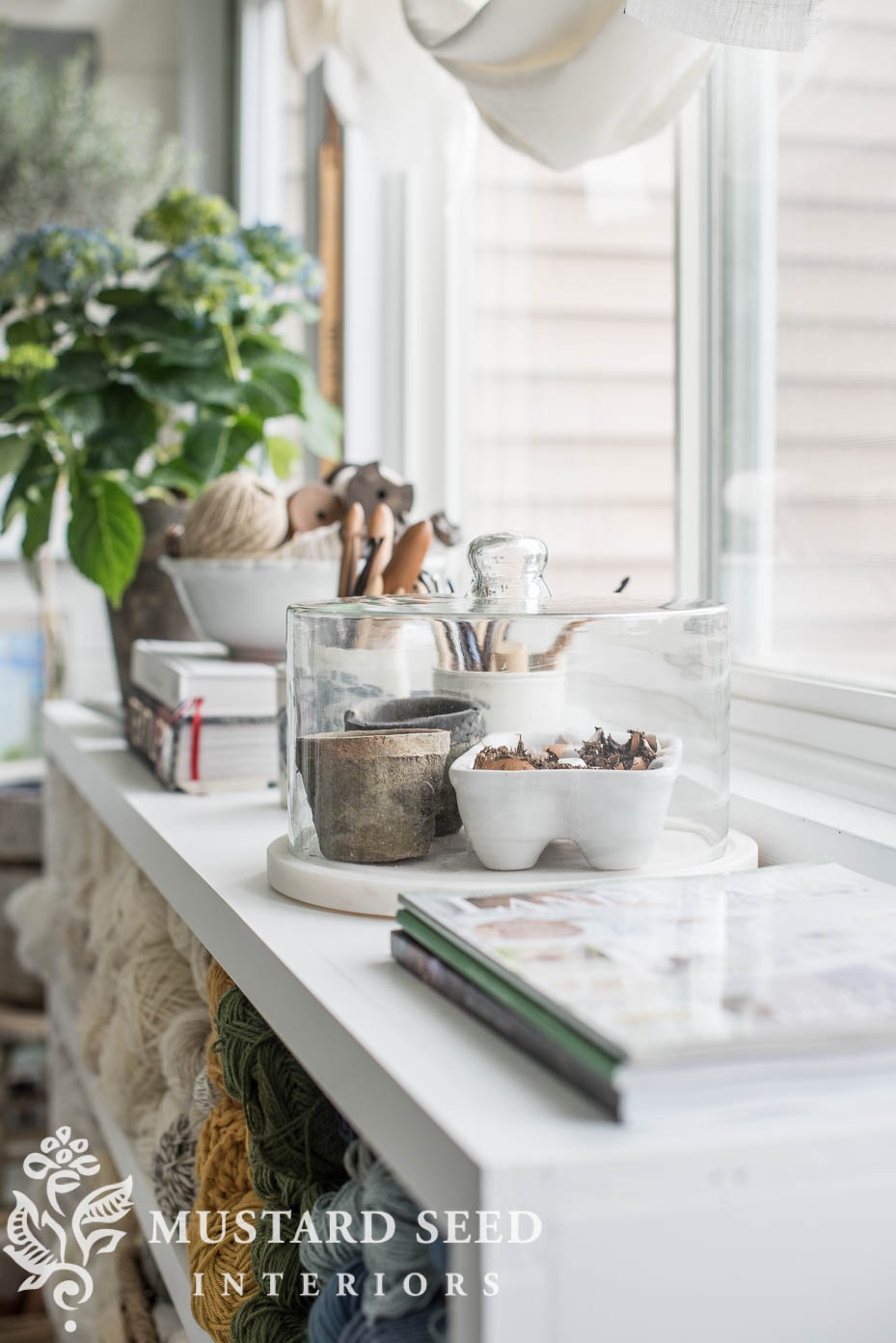 And I made some blueberry ink!  I found @tanya.val on Instagram a few weeks ago and was fascinated by all of her homemade inks.  I decided I would give it a try… 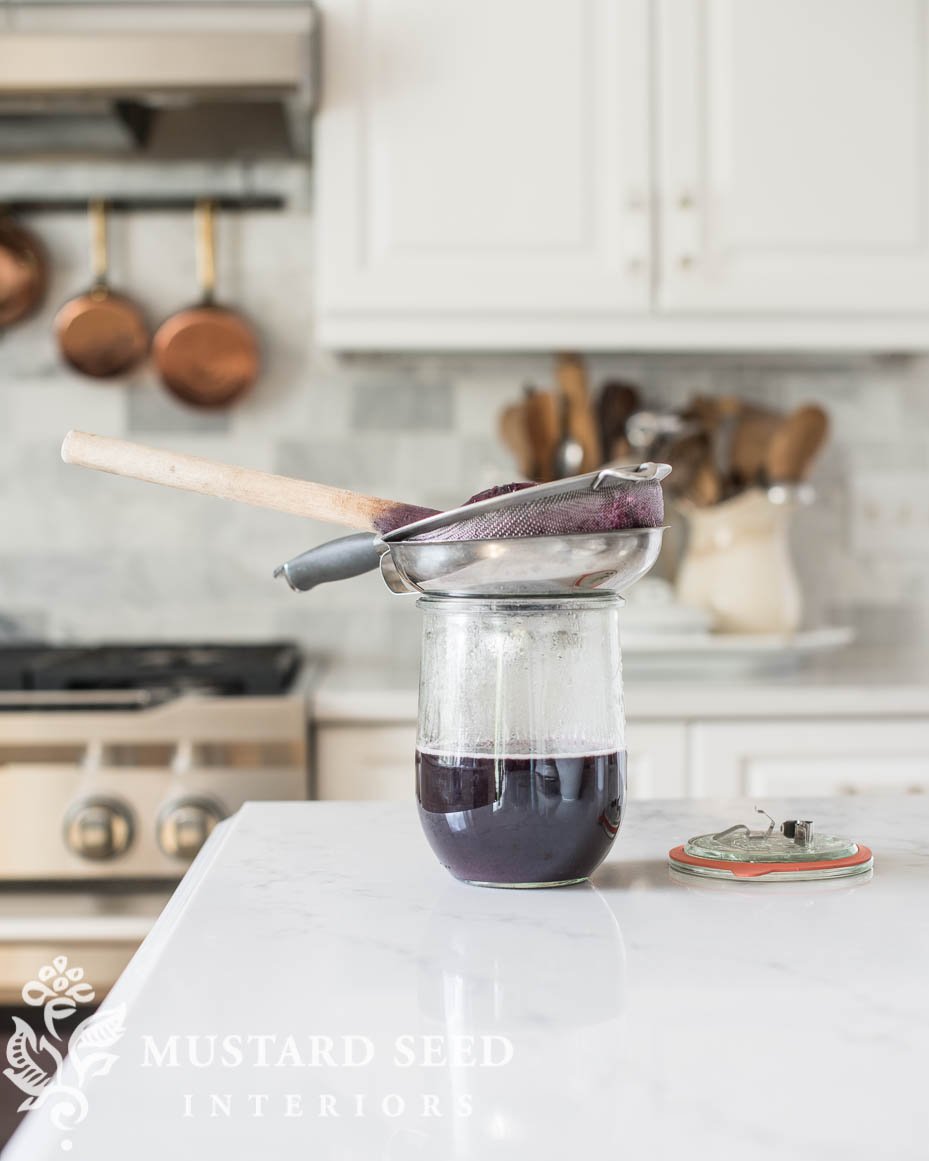 I ended up dying a wooden spoon in the process! 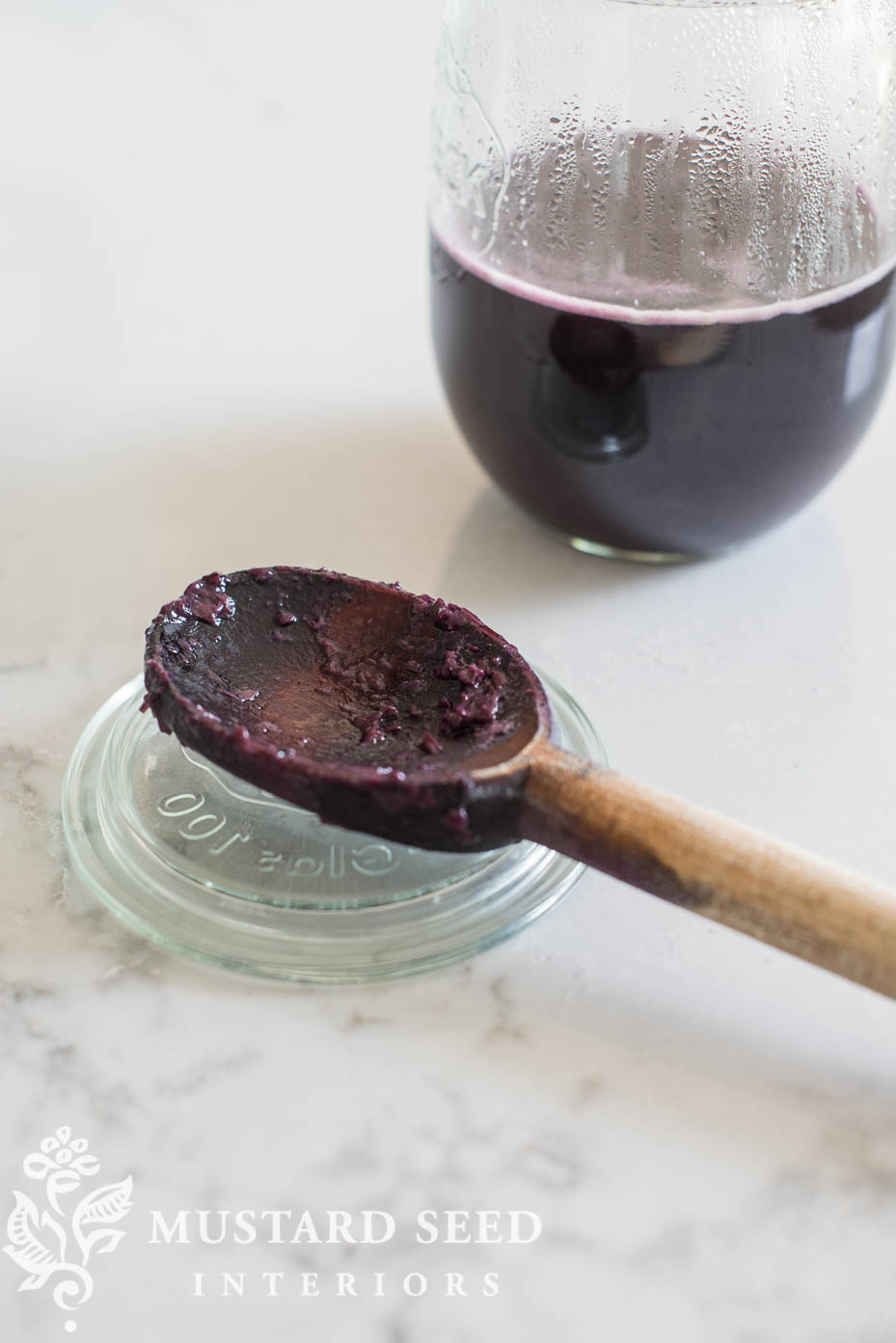 My ink was a little thin after the first try, so I let it simmer and concentrate later in the afternoon.  I don’t know what I’m going to do with it, yet, but it was a fun activity. 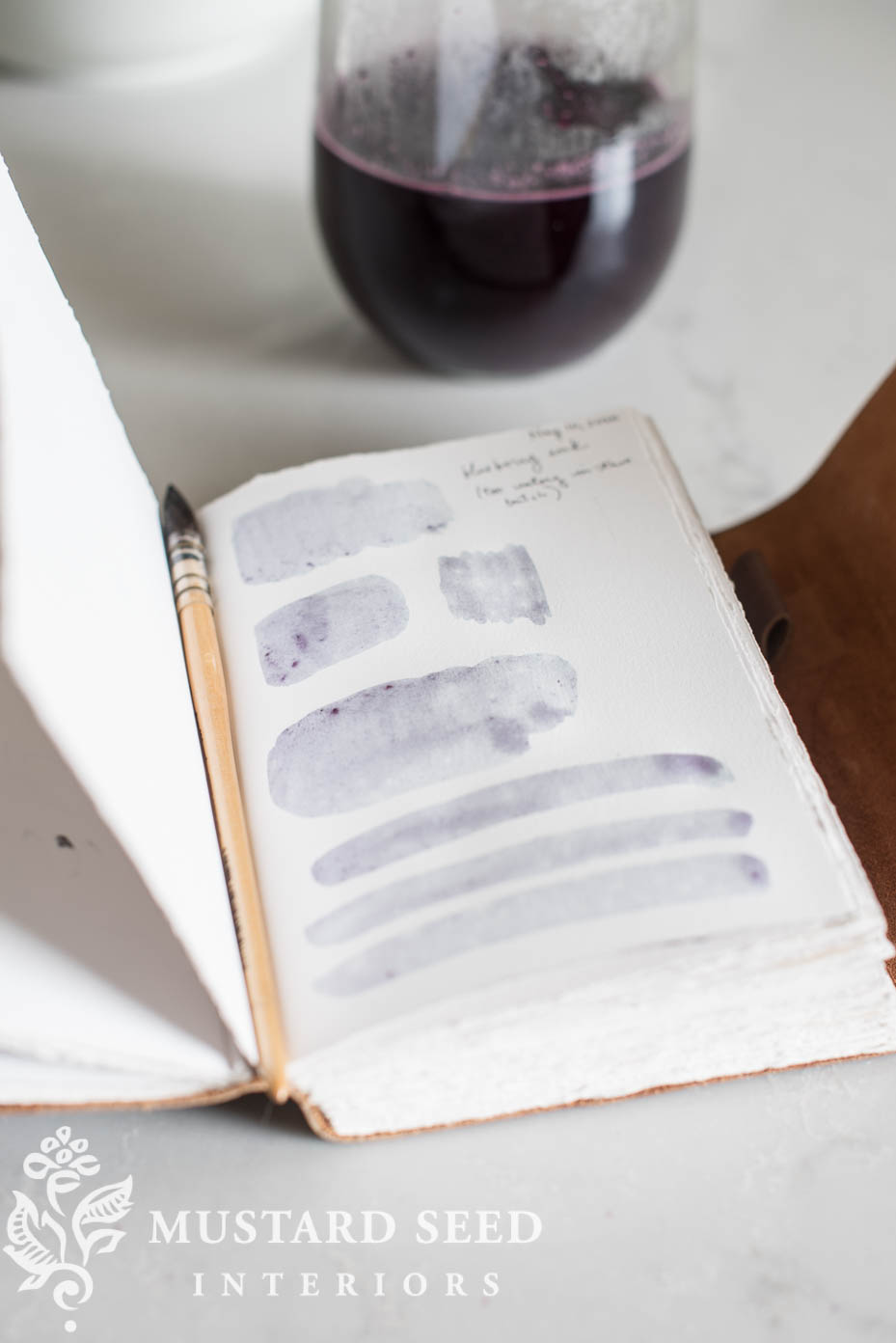 On Saturday, I was supposed to do an Instagram live with Shaunna about our mentoring group and new community, but I had a splitting migraine.  I thought it might keep me down and in the dark for a few hours, but I was in bed all day!  Thankfully, I only had a ghost of the headache on Sunday, so I was able to paint, make the blueberry ink, and do some other fun and creative things.

We ended up doing our live event this morning to talk about running a business in tough, uncertain times.  It’ll be live for 24 hours on my IG Stories if you want to check it out.  I hope it will be encouraging to those who need it.

And today, we’re opening up the TCe Creative Business Mentoring to new members!  This is Mustard Seed Mentoring, but with a new name.  Shaunna’s been involved with it from the beginning, but she’s going to take a more active role.  If you’re an entrepreneur in need of some information, encouragement, motivation, and mentoring, this might be a good fit for you.  We’ve seen our current members doing some impressive things to thrive during this difficult time. 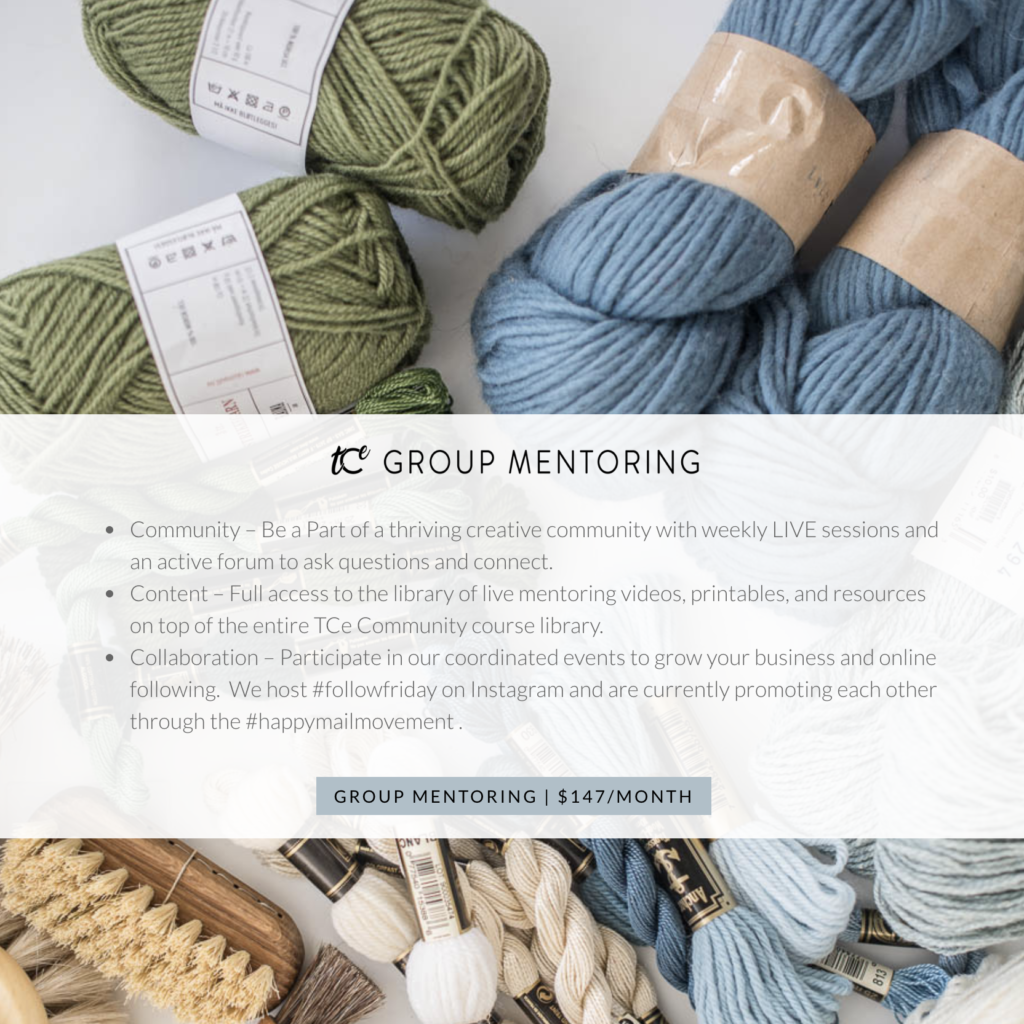 And, we are launching something totally new for those who want support and community at a gentler pace (and a much lower price.)  We’ve launched the TCe Community – a community for creatives and entrepreneurs to connect, collaborate, and learn together.  Members will have access to hours of course videos on starting and running a creative business as well as branding.  In addition, we’ll release new weekly printables and answer questions during a monthly live Q&A for just $7/month.  You can find details on the TCe Community HERE. 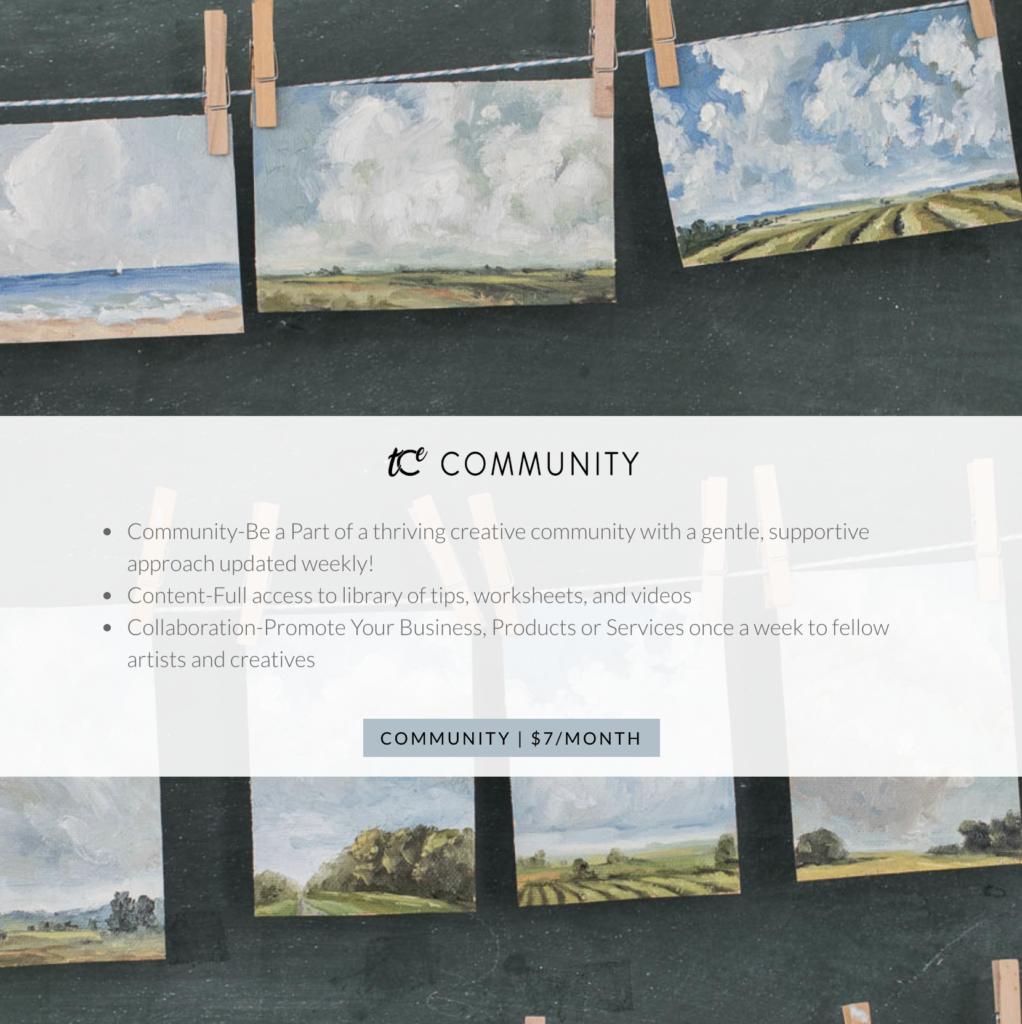 Because we know there are people struggling during this time, we are donating half of the profits from our first month to Save with Stories to provide meals to kids who aren’t getting their lunches at school.  We also have scholarship slots available for our mentoring group for those who need more personalized mentoring, but can’t afford the cost due to financial hardship.

On today’s Instagram Live, Shaunna said, “We want to do well and do good with our businesses.”  I love that and we are launching these programs with that spirit.  We want them to do well, but we’re also hoping to do good with them.  We hope they will encourage and equip those who need it.

So, there is a lot going on!  I also have a lot of posts in the queue for you…  a dining room decorating dilemma, part two of the parsons chair slipcover tutorial, a tasty make-do banana bread recipe, an upholstered daybed, a recovered ottoman, a still life painting class, a new crocheted dishcloth pattern, another #happymailmovement giveaway and more!

Oh, speaking of, the winners of the 10 mini oil paintings are… 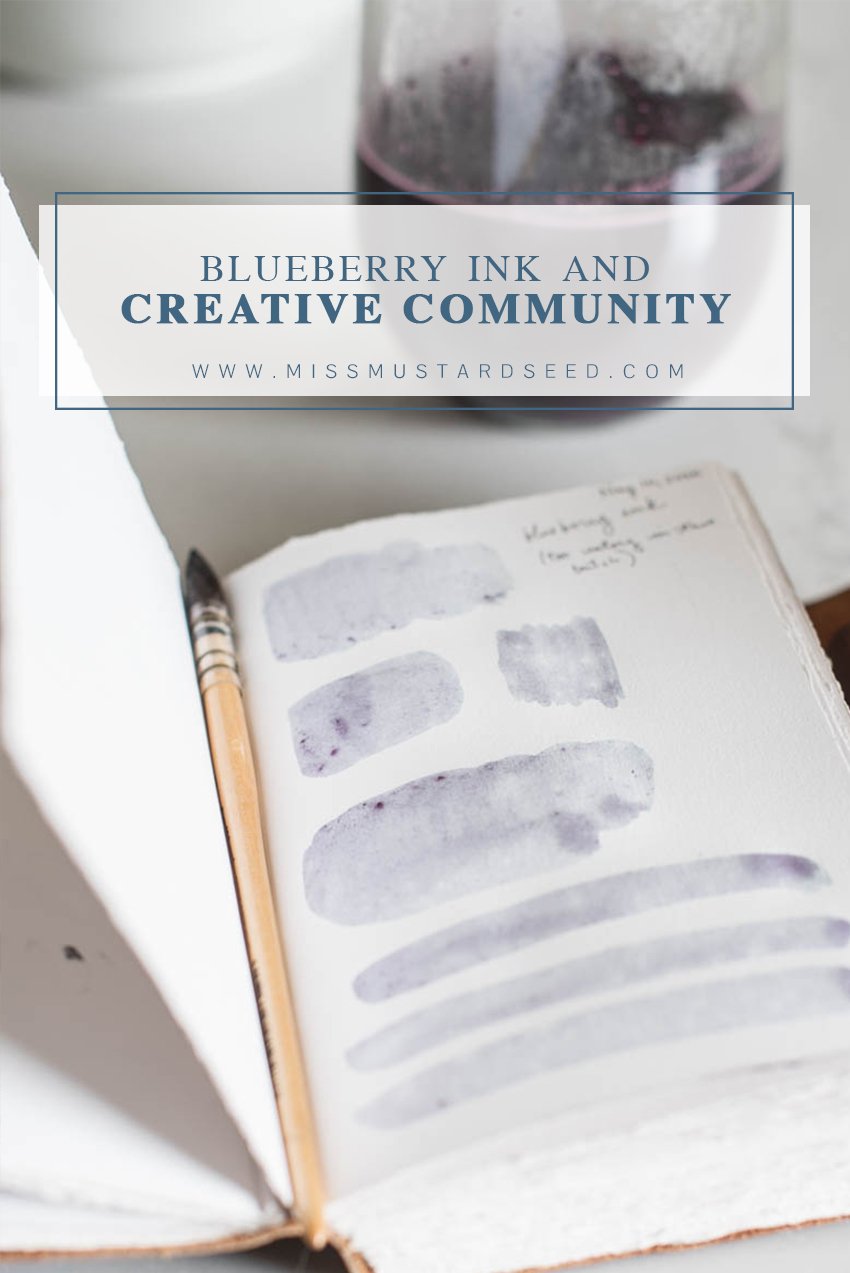 decorating, projects, and recipes for Spring