As I shared yesterday, the past couple of weeks in the studio have been devoted to getting things finished that have been hanging around for way too long.  I’ve ignored some of them, because I knew they would be a pain-in-the-rear to work on, like the French chair with nailhead trim (yet to be revealed), and I ignored others because I just didn’t know what to do with them.  I knew they had potential and I wasn’t quite ready to give up on them, so they languished in “the stash”.

This oversized Eastlake mirror frame, minus the mirror, was one of those pieces. 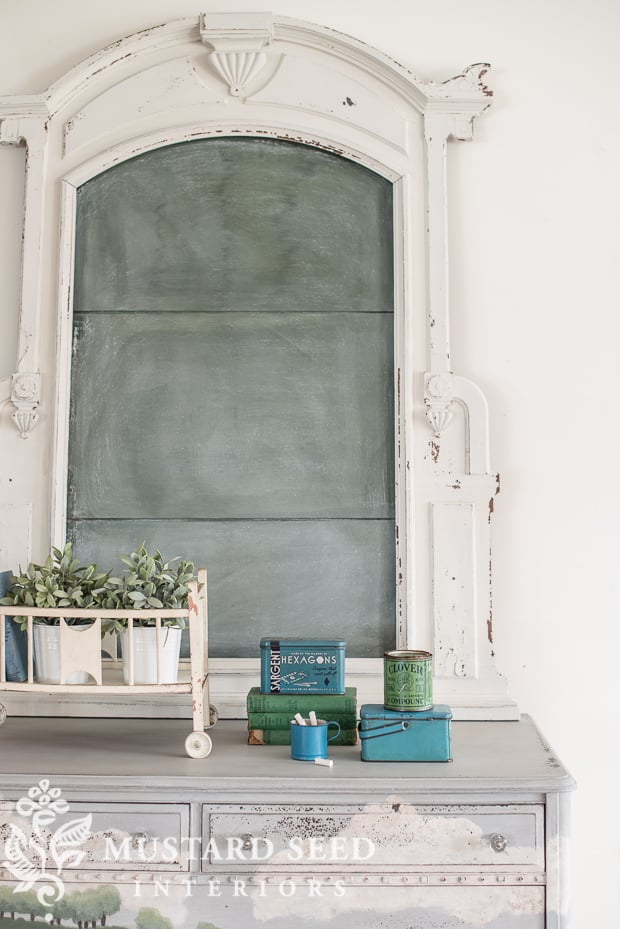 I picked it up at a yard sale about three years ago.  I just loved the shape of it and the patina on the wood.  I immediately thought it could be a chalkboard or perhaps I could have a mirror custom cut for it.  I initially discarded the idea of a chalkboard, because it felt too overdone at the time and getting a mirror cut was a bit more than I wanted to invest.  I tried to sell it as is at Lucketts 2014, but it didn’t sell. 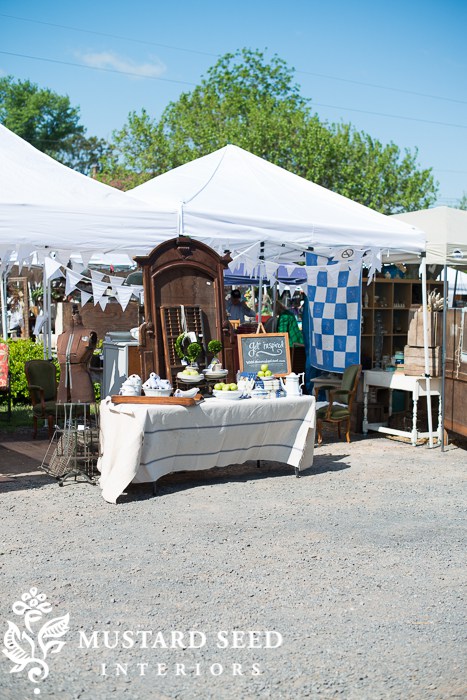 And it’s been hanging out in my house and then at the studio ever since.

One problem with it is that it is massive.  I didn’t realize how large it was until I got it home from the yard sale and tried to prop it up on a dresser.  It scraped the ceiling when I tried to stand it up!  I originally spotted it in a large barn, so my perception of the scale was way off.

The other problem is that, without a mirror, it felt like a big, light-sucking hole in whatever space I put it in.  It was dark and massive and those two things usually don’t contribute much to the decor of a room.  They tend to detract.

So, despite the pretty tone of the wood, I decided to paint the frame in Farmhouse White and the inset wooden boards, that were meant to back the mirror, as a “vintage chalkboard”.

I used the color recipe created by Allison from The Golden Sycamore when she made her “vintage-eclectic chalkboard gallery“.  She used Miss Mustard Seed’s Milk Paint – two parts Artissimo to three parts Boxwood.

This piece was so dark that it took three coats of paint on the frame and the inset boards.  I didn’t use Bonding Agent, so the paint could chip and flake on the frame and would soak into the raw wood boards.  I lightly distressed the frame with worn (well-used) 100 grit sand paper and wiped it down with a microfiber cloth.  I decided to leave the milk paint raw in this case. 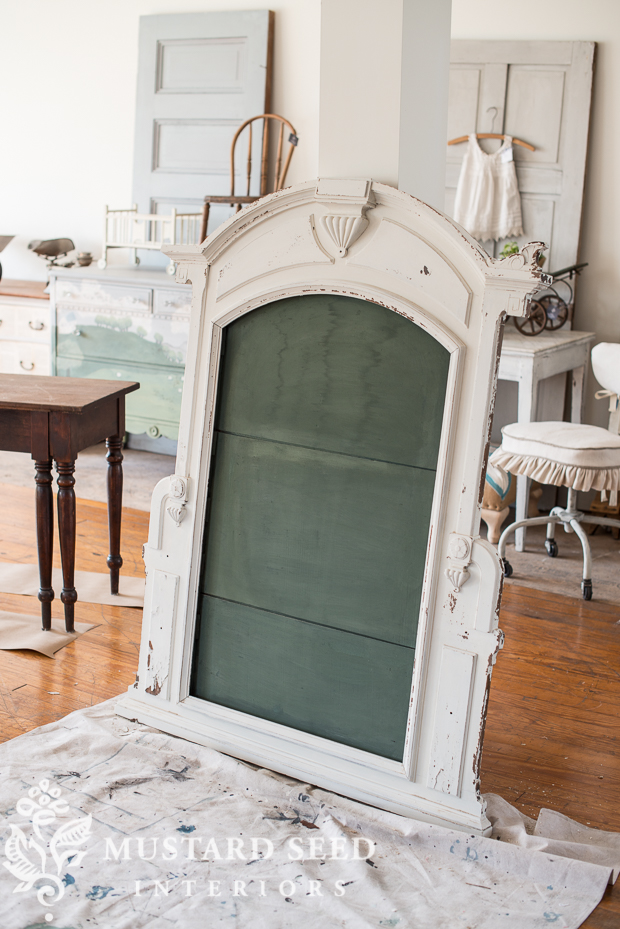 The inset boards were raw wood, so the milk paint soaked right in and it won’t ever chip or flake.  That paint soaked in like a stain and the multiple coats built it up to a nice, opaque surface that will hold up to lots of writing and erasing. 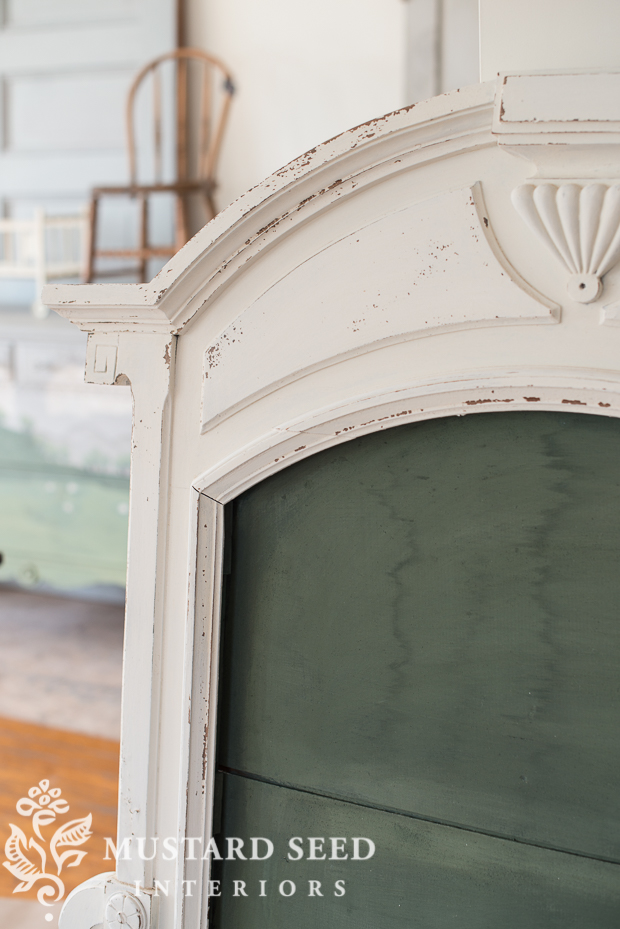 The color recipe that Allison created was spot on.  The key to making it look like a chalkboard, though, is seasoning it with chalk. 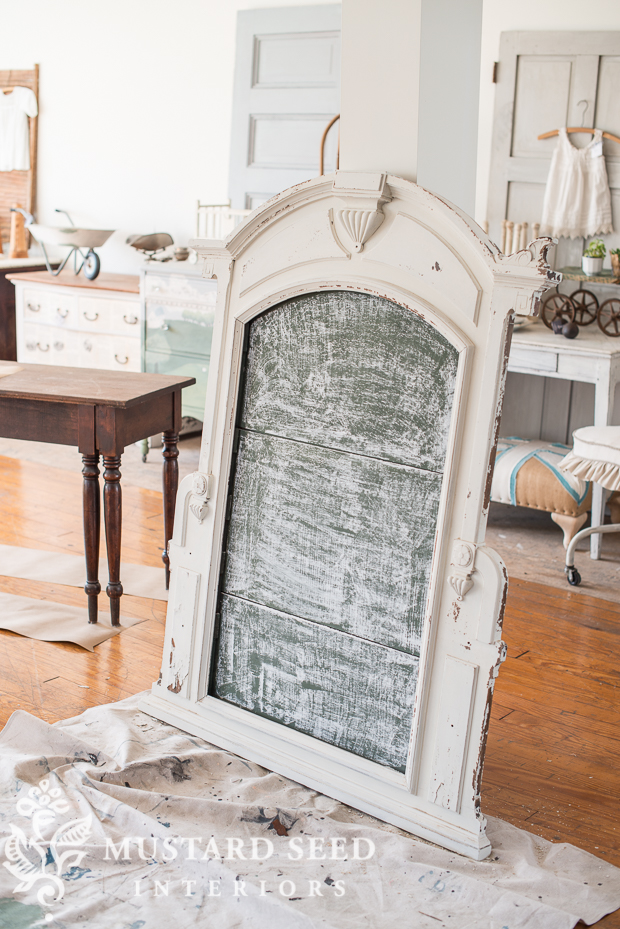 I rubbed the entire surface with a piece of chalk… 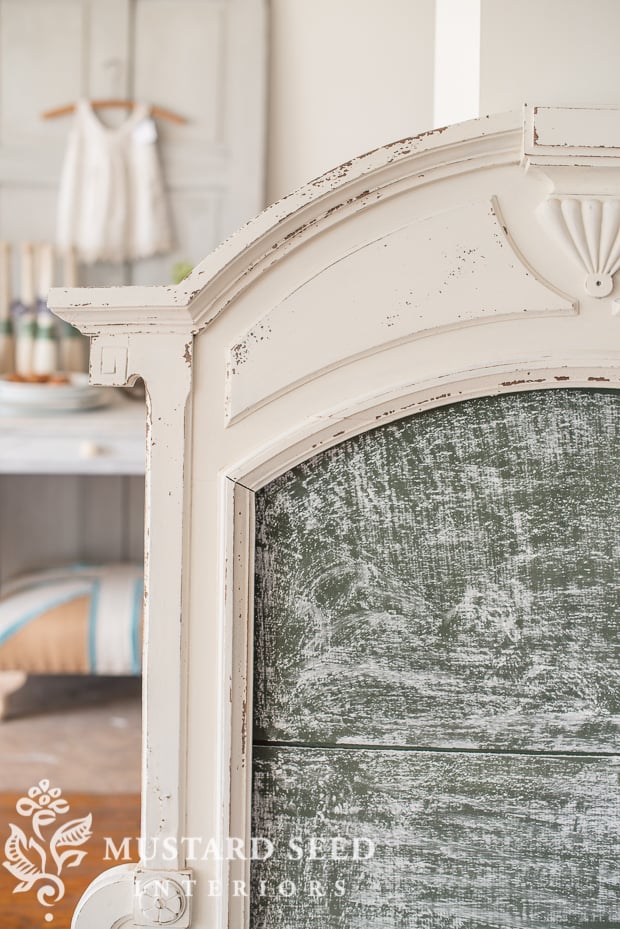 …and then wiped it off with a dry cloth to get the “smeary-chalky look” that softens the paint.  It also prevents lettering/drawing from being “burned” in the surface, meaning you can see it even after it’s erased. 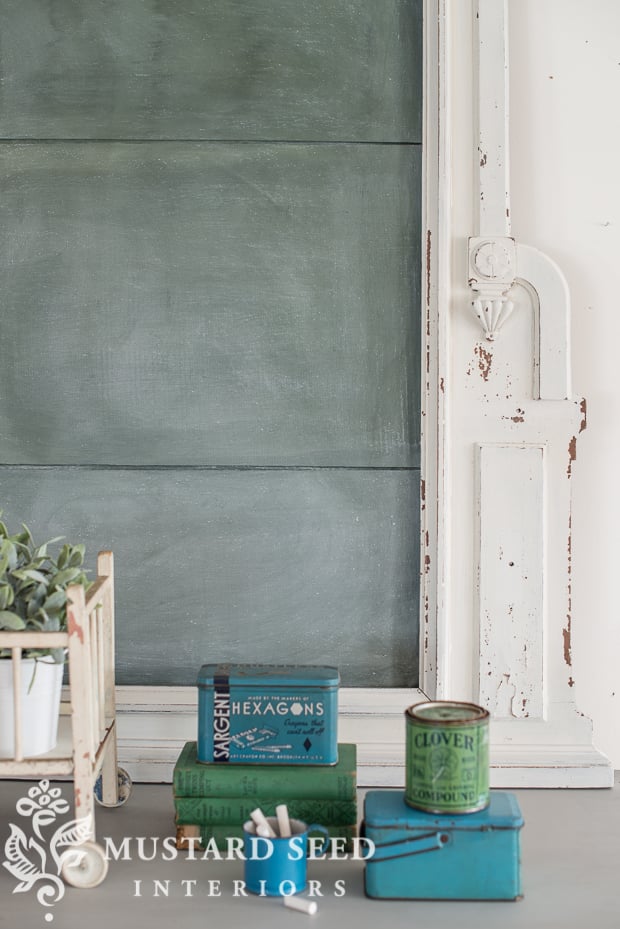 I love, love, LOVE the way it turned out and I can’t believe this gem sat around for so long.  I guess it needed to wait until just the perfect time for inspiration to strike.  It may not have been as good if I forced it. 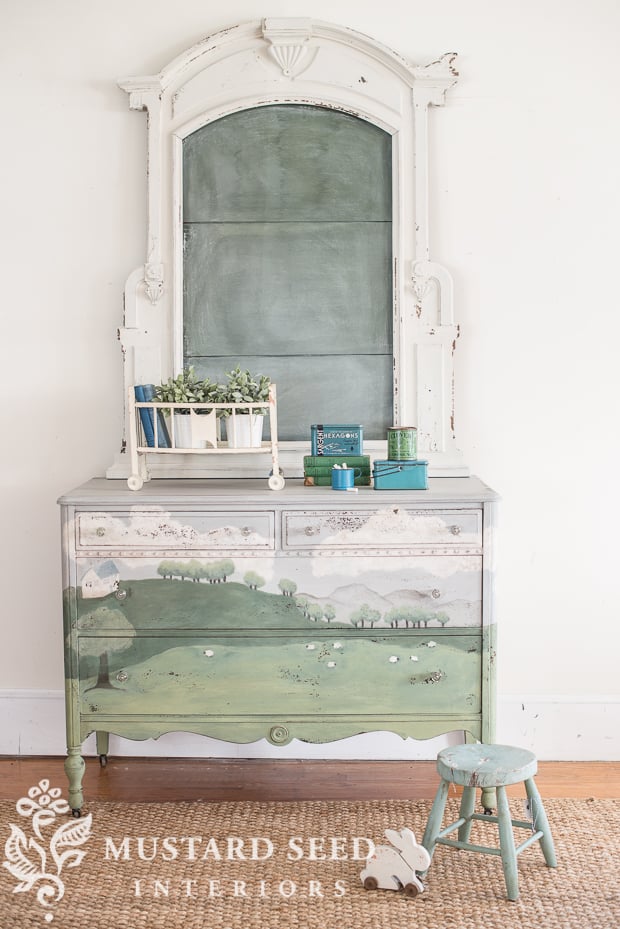 While I was resistant to painting this piece at first, it was absolutely the right decision.  It detracts from the chipping veneer and missing pieces and visually lightens it up a bit. 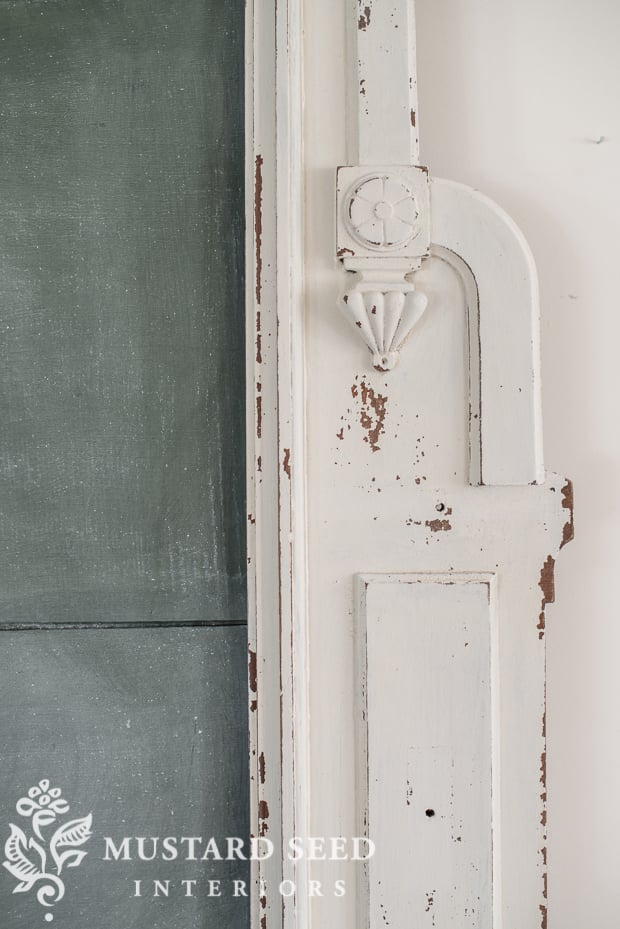 I even love the seams of the inset boards.

I’m just smitten and having a love fest with the entire thing. 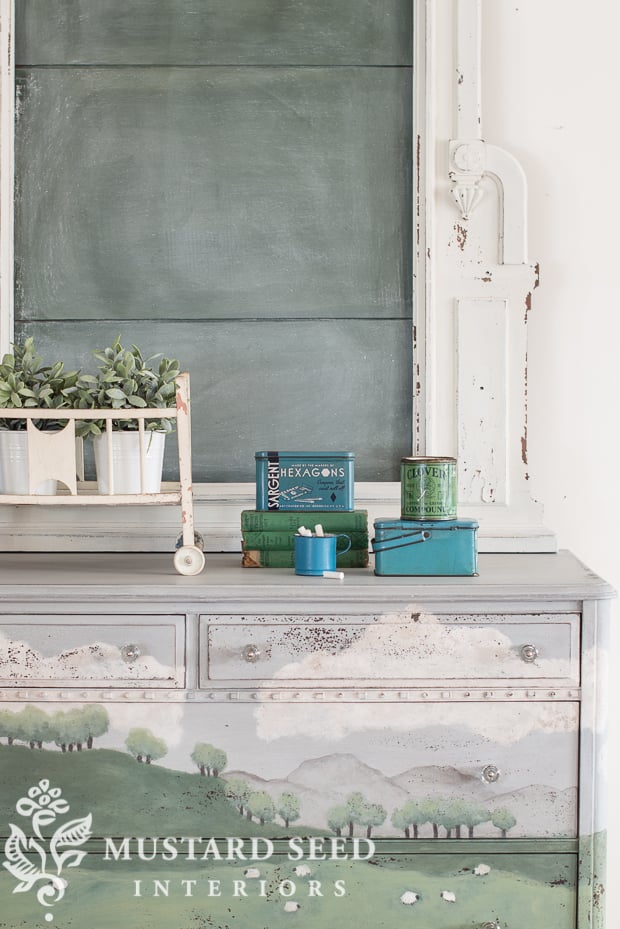 I paired it with the landscape dresser and some old tins, books and a doll bed filled with a couple of artificial plants from Ikea. 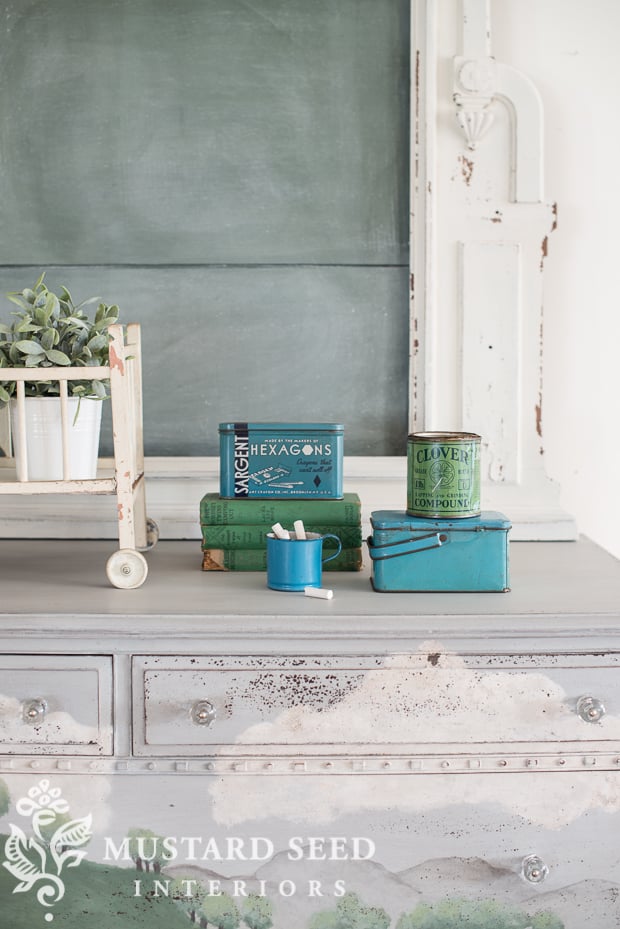 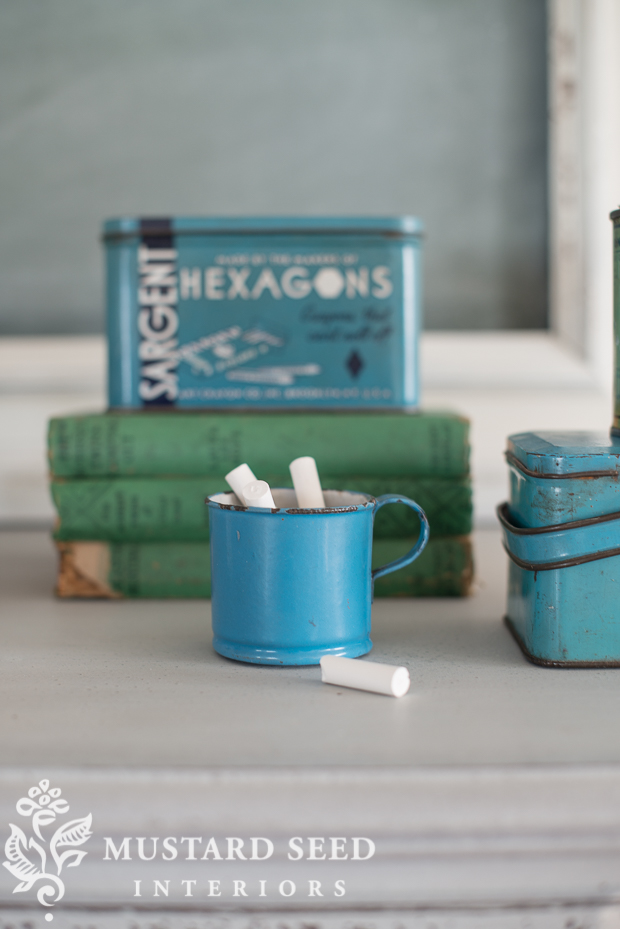 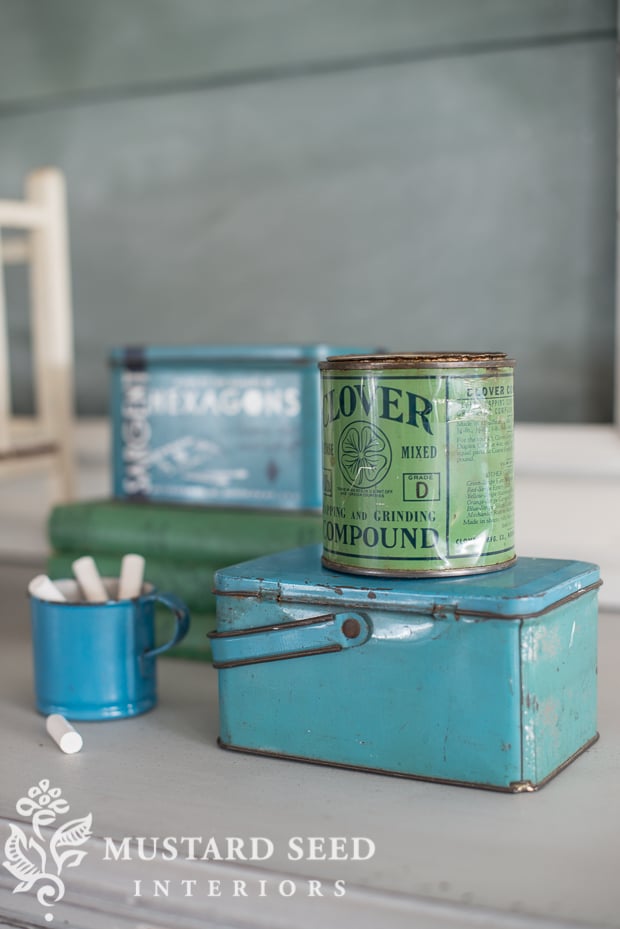 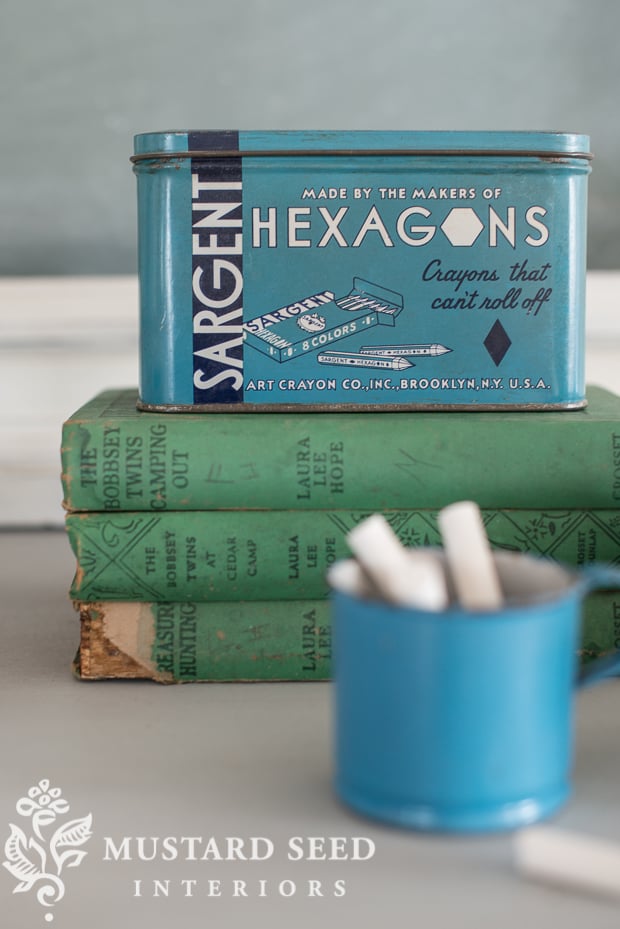 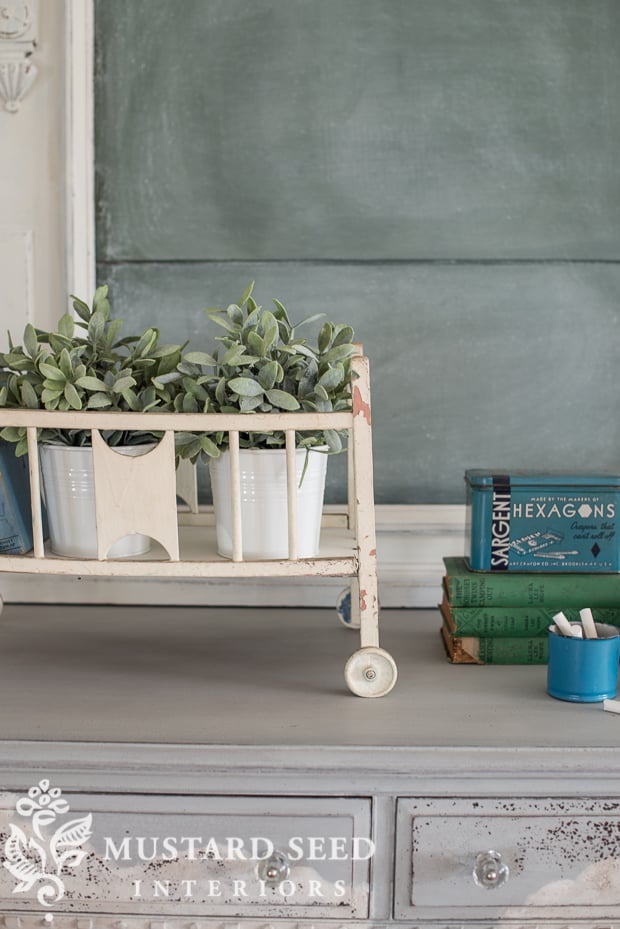 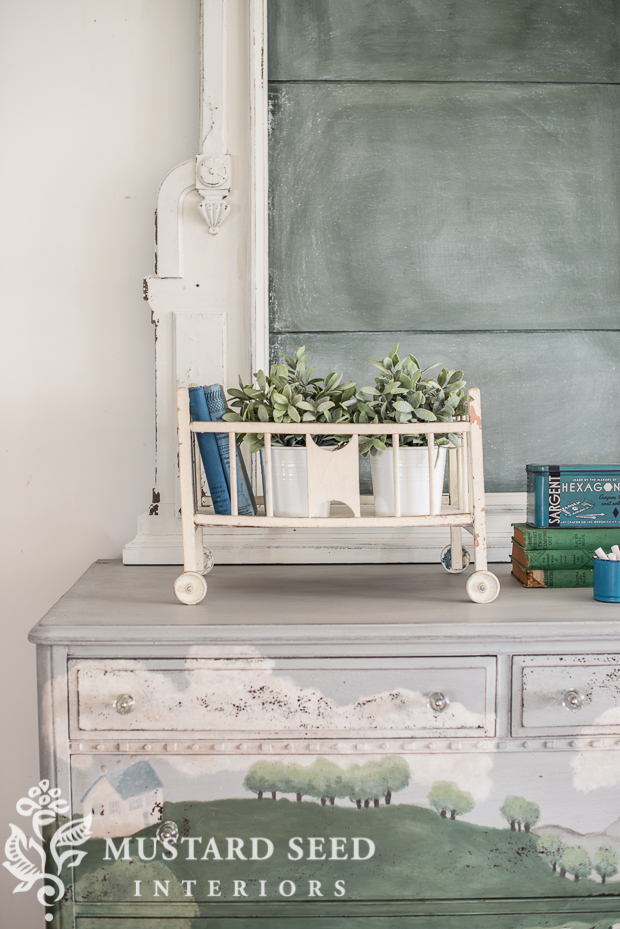 Man, I wish I had the perfect place for this!!  Maybe I’ll find one, but more than likely, it’s headed to Lucketts 2016… 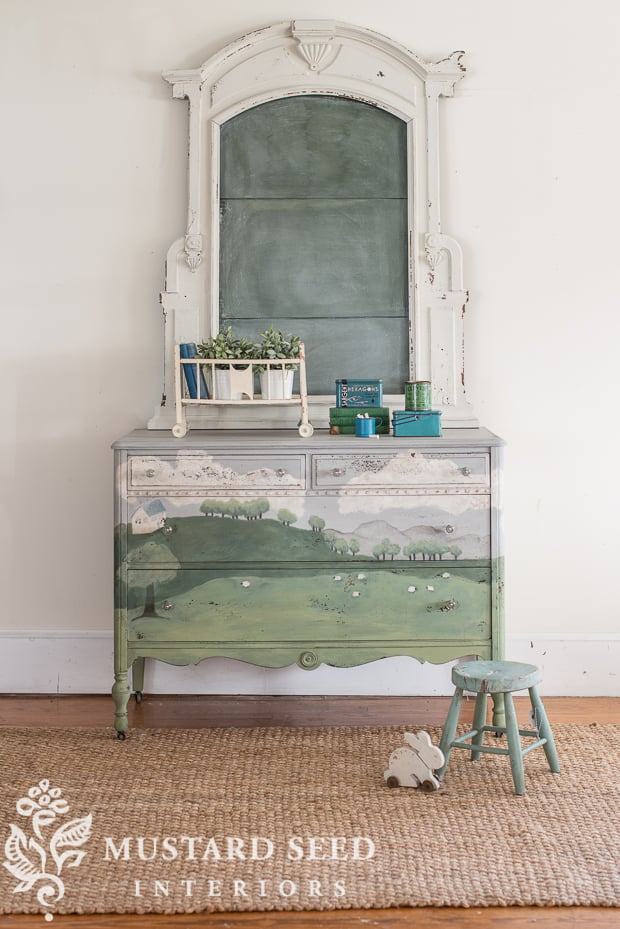 …and I bet I won’t be taking it home this time.

I think everyone named Mary should enter my next giveaway.  Clearly, it’s a “lucky” name!  🙂