Saturday night was a rough one.  Jeff and Marshall (my oldest) slept in a tent set up in our backyard, so that meant I was on overnight diabetes-duty on my own.  For those who don’t know, Calvin, our youngest is a type 1 diabetic.  This is just a normal part of our lives and we all work together to manage it, but the most wearisome thing about diabetes is it never takes a break.  It doesn’t sleep.  It doesn’t care if you’re traveling or if you want to have a special treat on a holiday.  It has to be considered and dealt with all the time.   And Saturday night, it was demanding.  His equipment wasn’t working, so I had to test his blood sugar every 1.5-2 hours and try to sleep in between with alarms sounding.  I woke up grouchy, groggy, and with a headache.

It felt like jetlag; like I just got home from Italy and needed to focus on staying awake all day to try to get back on my local time.  Except I wasn’t on a high from going to Italy!  I was on day 39 of abiding by our state’s stay at home order.  I sat out on the deck for a while to soak up the sunshine as if I were solar-powered.  I told Jeff that I either needed to go all day or take a long, hard nap.  There was no in-between.  I chose to go all day, so I busied myself with household chores, worked on a few organization projects, and painted.

Over the past few weeks, I’ve mentioned how much I miss plants and fresh flowers to Jeff. My friend, Cheri, brought me some flowers last week.  I enjoyed them so much and did everything I could to extend their life and enjoy them, but cut flowers will only last so long. 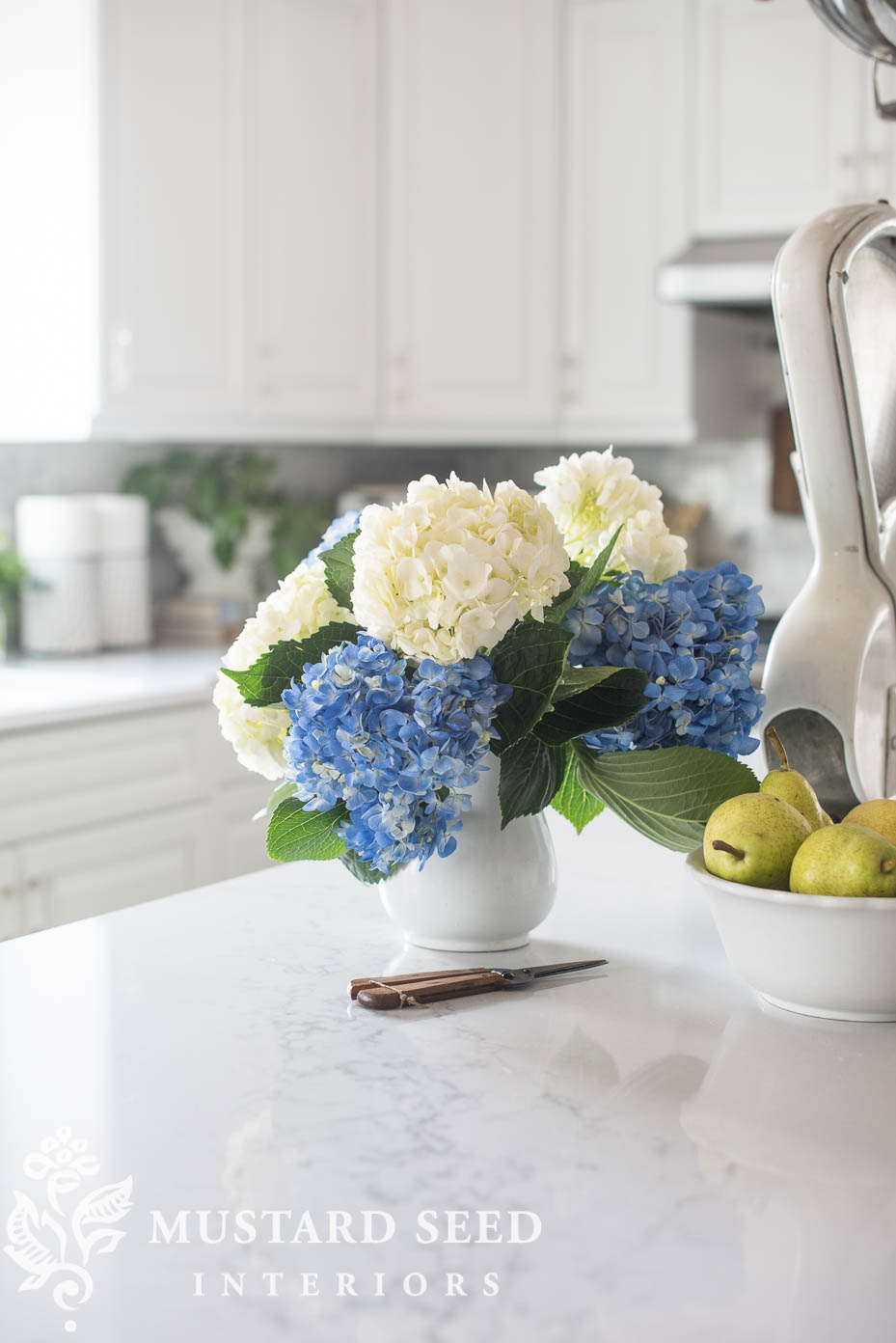 Additionally, this is the time of year when I’m usually hitting the nursery to pick up some herbs, adding a few new houseplants, and buying some ferns to flank the front door.  I felt like none of that would happen this year and I was mourning that.  I’ve been snooping around online for plants, but never actually ordered any.  In the early afternoon, Jeff suggested that we go out and get a few plants.  We would wear masks, just shop in the outside area, and be quick.  We would also turn around and go home if the store was too crowded or the lines too long.

I waffled about it for a few minutes but decided the risk would be low and it would be a good pick-me-up.  I would have some herbs to grow and plants to tend as well as some flowers and greenery to use in photoshoots.  So, we went.

We experienced the surreal new normal of everyone wearing masks, waiting in line to get in the store, and the awkward tension hanging in the air as we’re all trying to navigate the changes.  I grabbed plants as quickly as I could, made some split-second decisions, loaded up the bottom of the cart with potting soil, and checked out. It was a strange experience, but worth it just to be out of the house for a little while and have a van full of living things to bring into my home! 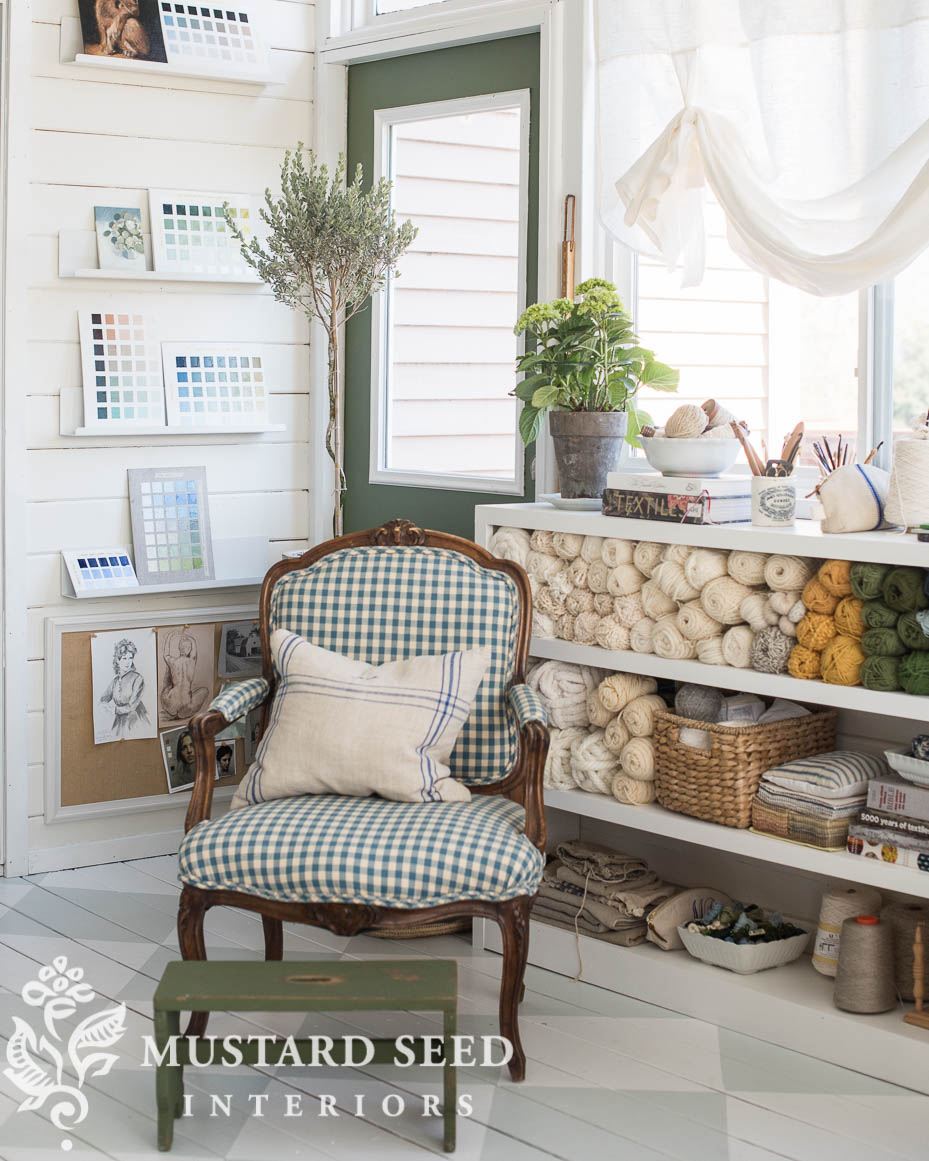 I bought a couple of topiaries just because I liked them!  Those were the split-second decisions!  I wasn’t sure where I would put them, but I knew I could find a place.  I put one in my studio in an antique white bucket on a stool.  It’s a corner that gets a lot of light, so hopefully it’ll do well.  I also grabbed a potted hydrangea.  I’ll keep it in here a bit before I transplant it to a larger pot and move it to the deck. 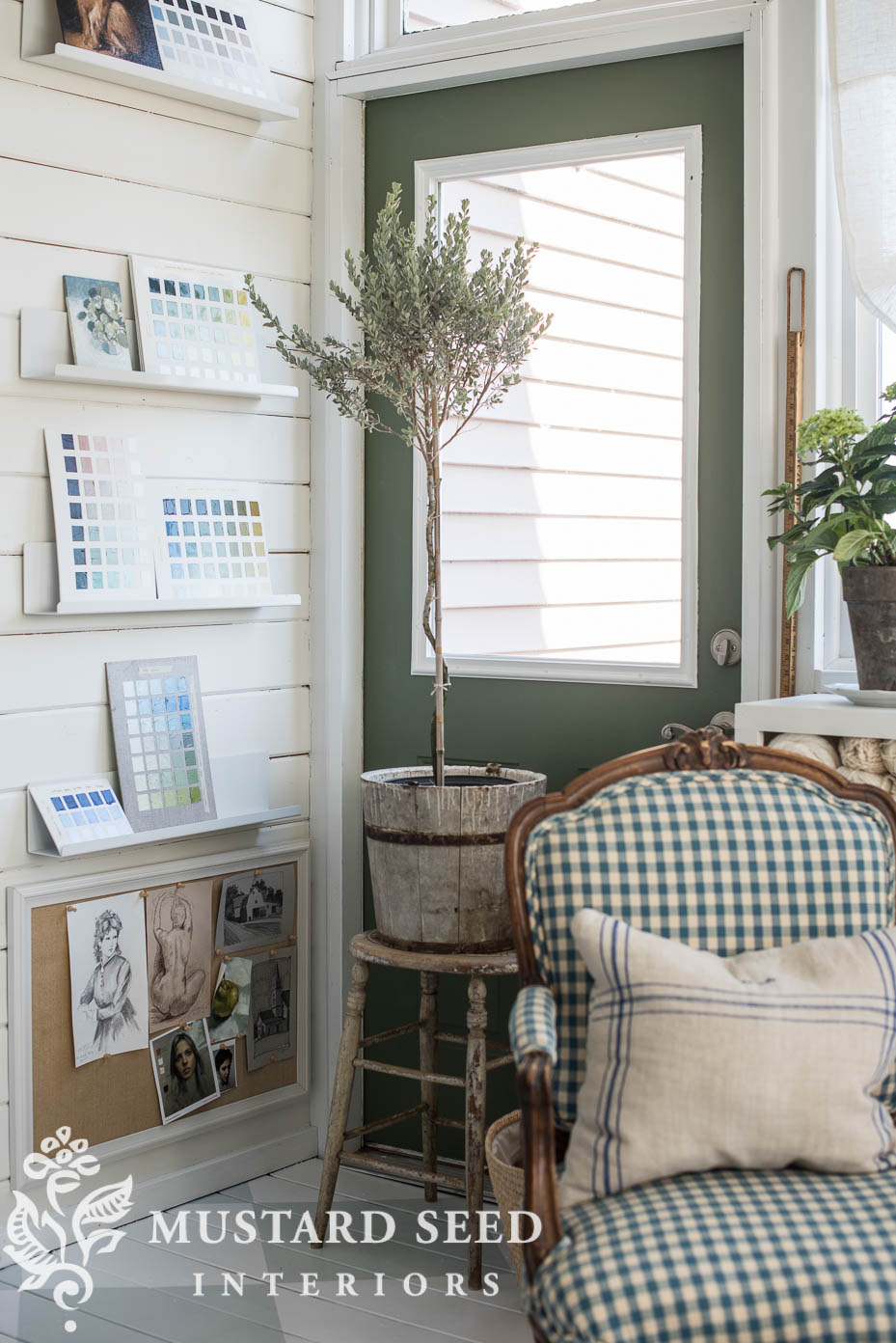 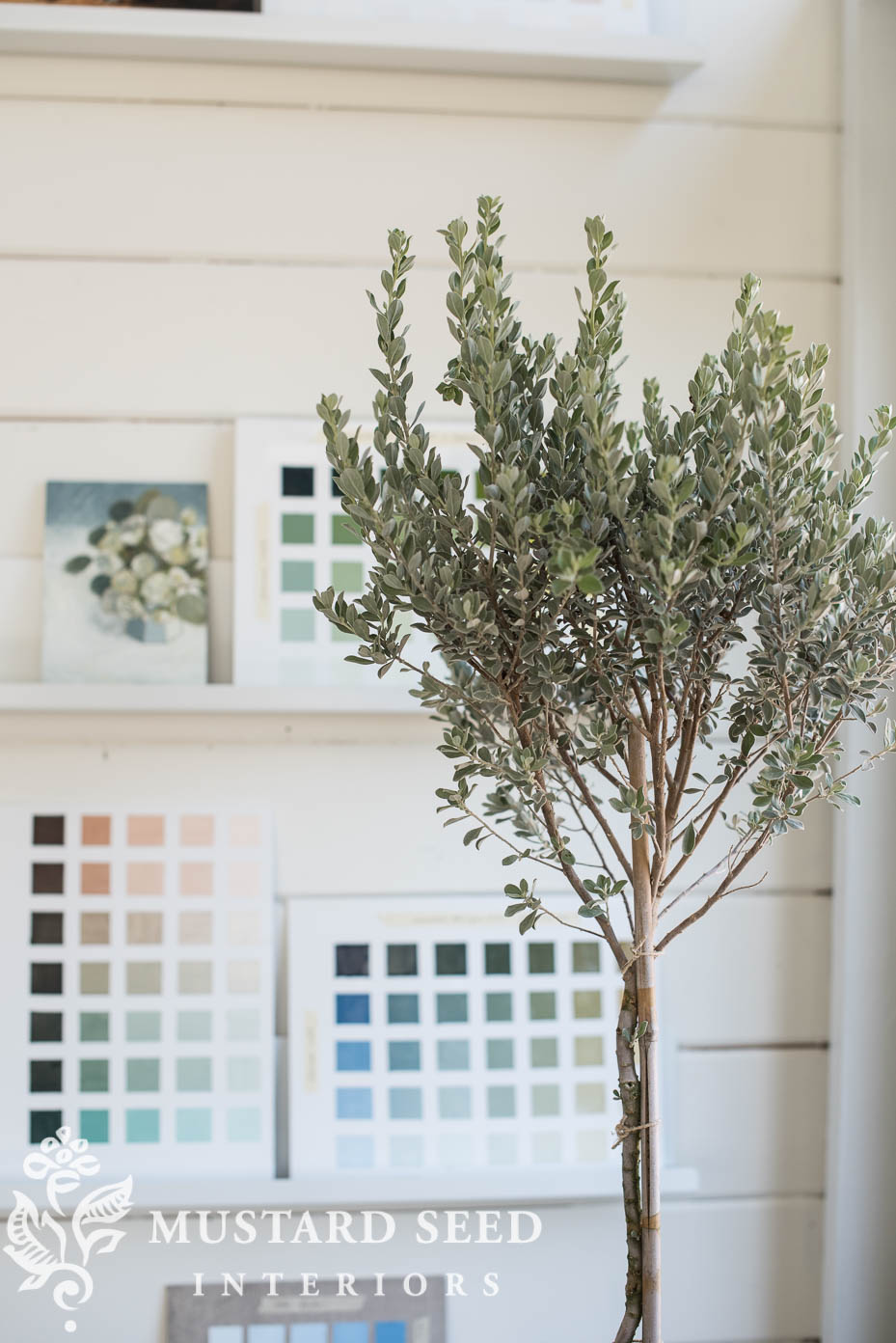 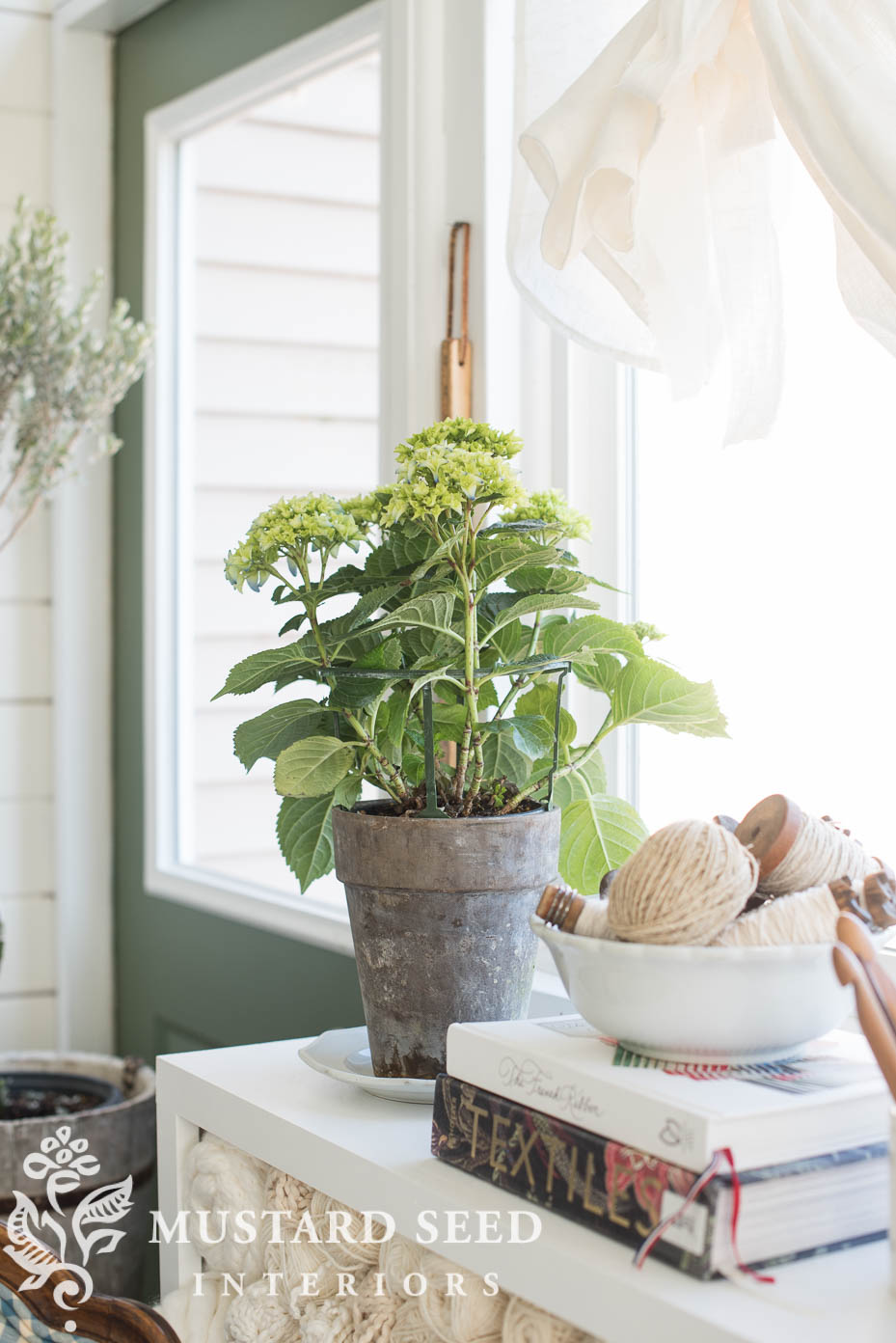 The other topiary ended up on the deck to add some height behind the wash tub herb garden. 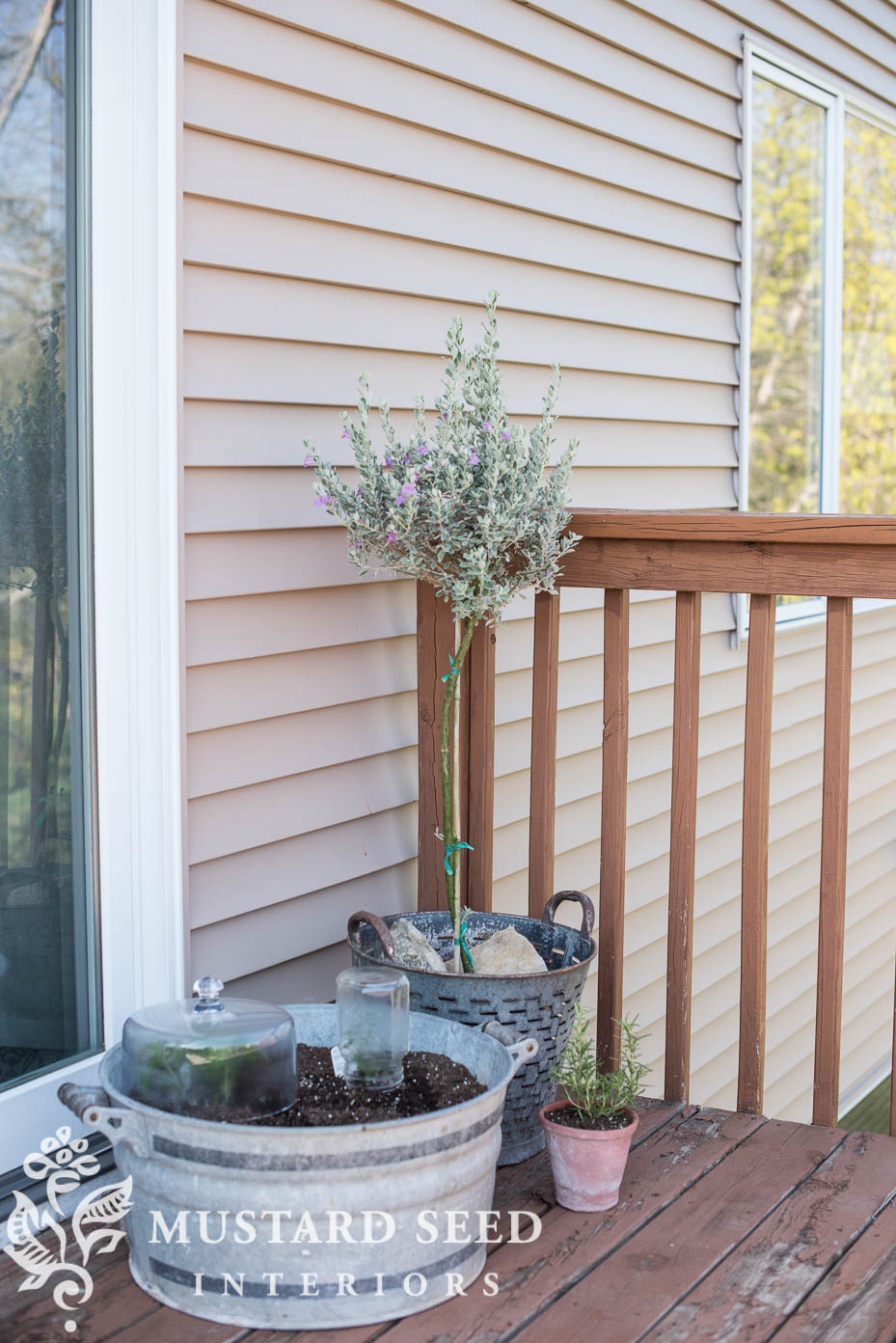 Our nights are still getting close to freezing, so I’m putting “cloches” over them at night to protect them.  I’m using a cake dome and a quart-sized canning jar! 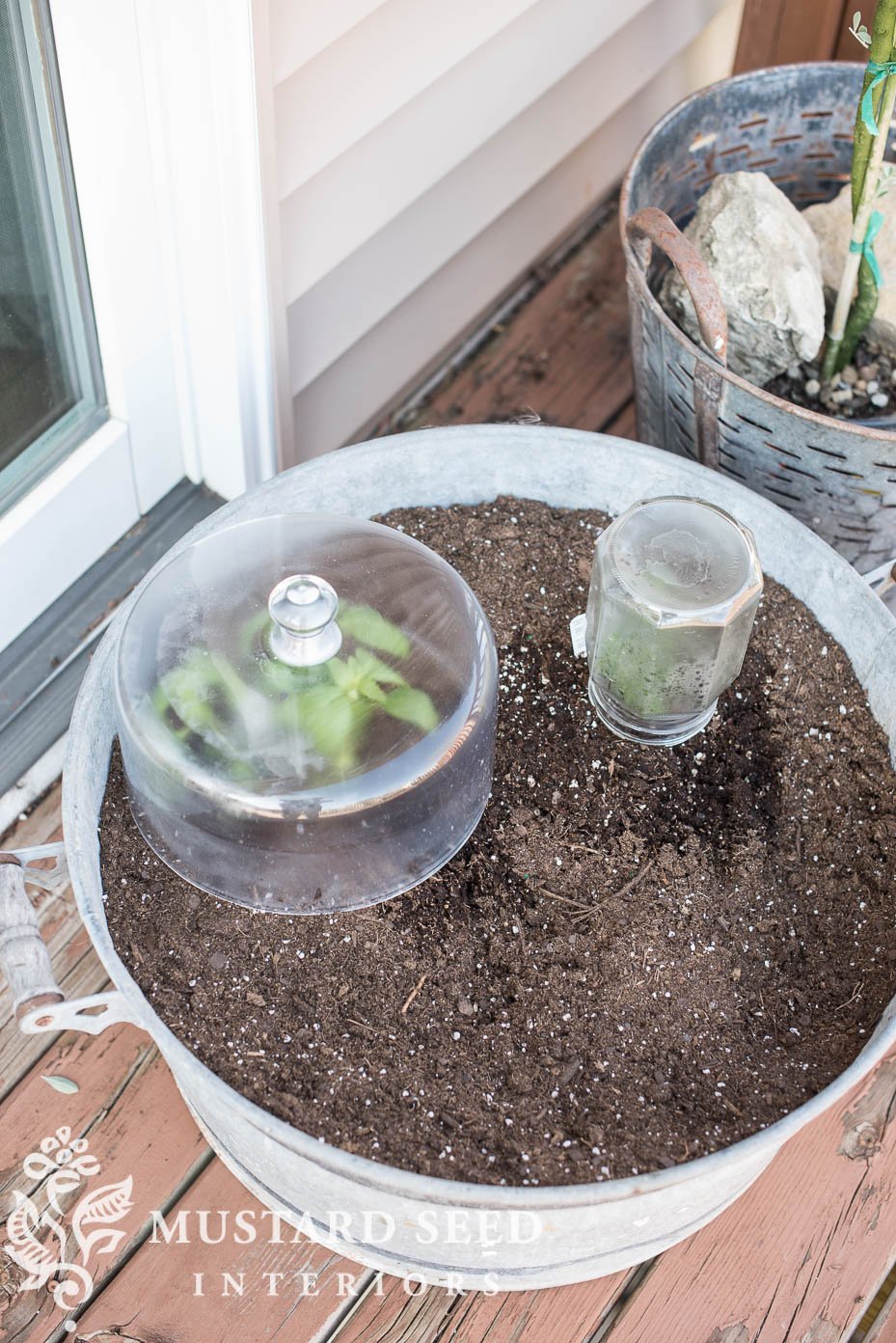 We started cleaning out the garage this weekend and I decided to move this oak desk/table to the deck.  It’s been hanging out in the garage waiting to be painted and/or sold for a while.  I thought it was better to put it to use.  It’s definitely going to get weathered out here, but that’s okay.  It wasn’t an expensive piece and it’s nice having a table under the window to act as a little potting bench.  And I’ll eventually see some plants from the window. 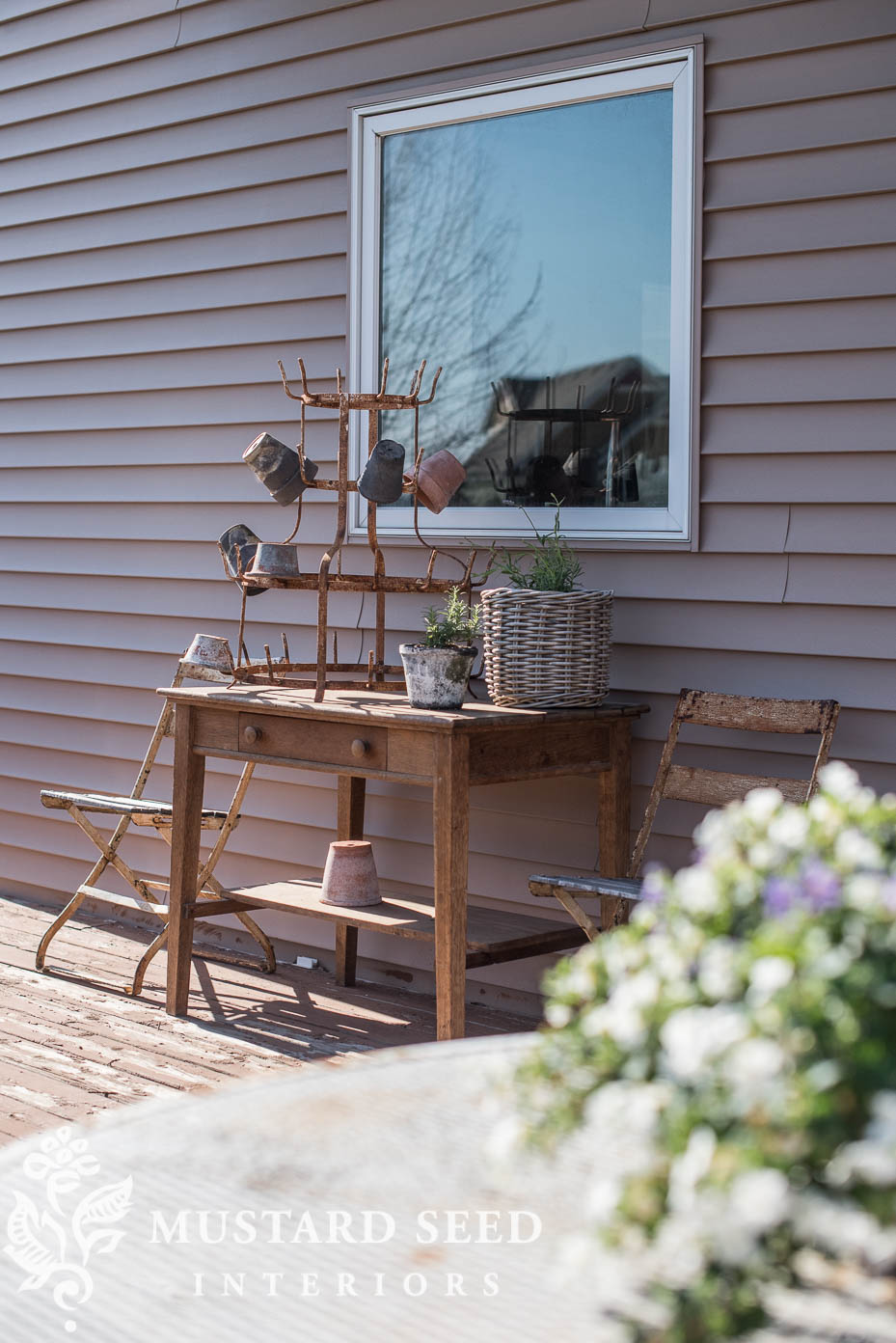 I planted some lavender and rosemary to put on the table.

I also bought a flowering plant for the center of the iron table.  It makes our view out the sliding door so much more inviting. 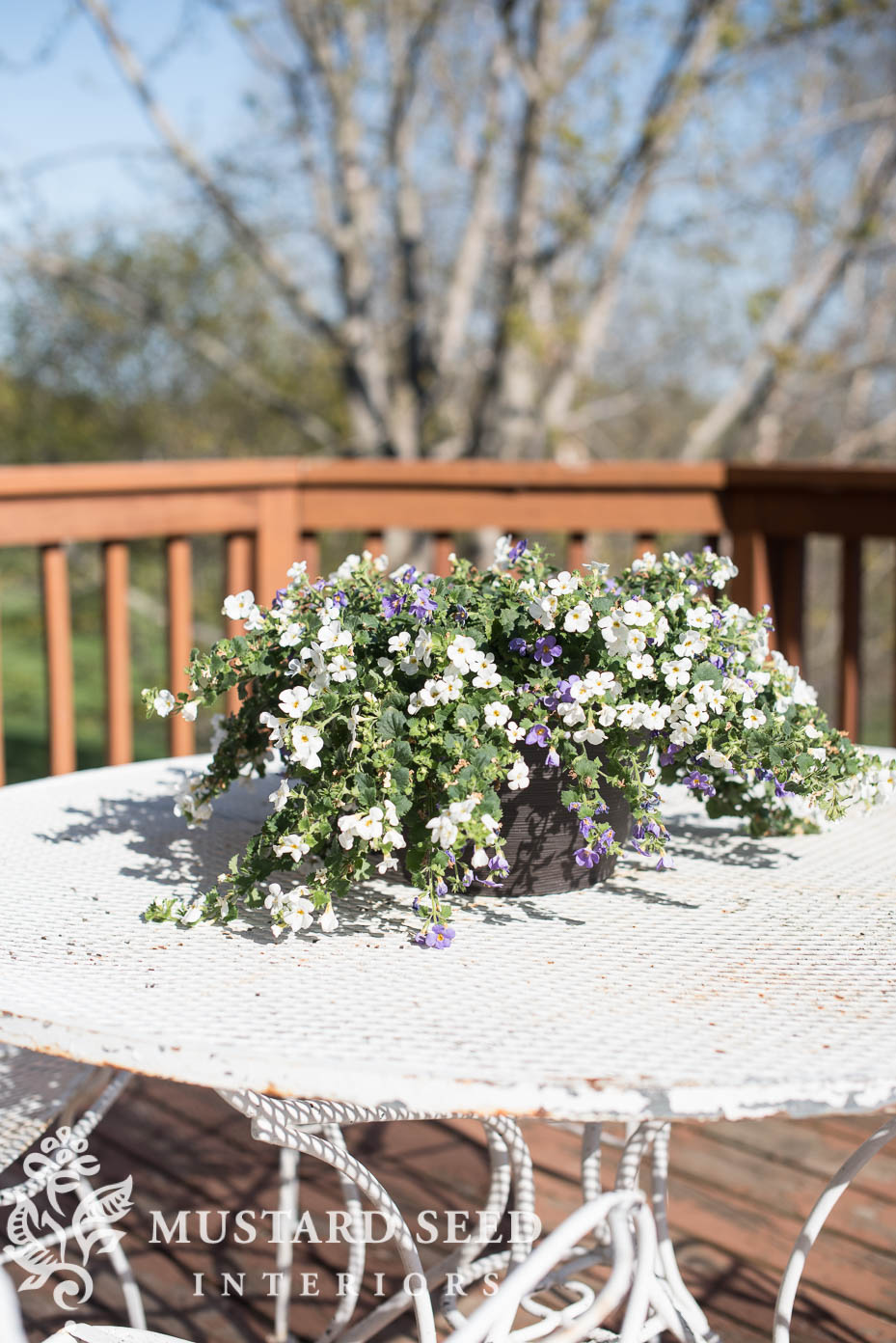 Since we moved in, our deck has been a bit of an eyesore, which is why you don’t see it very often.  The deck was sloppily painted in a rust color that has been slowly peeling for almost three years.  The peeling has gotten worse over the last year and it now flakes off when you walk on it, when it’s windy, when you try to sweep, etc.  We even track flakes into the house!  In addition to the peeling paint, some of the railings are getting wobbly, the steps are crooked from settling, and some of the boards are starting to rot.  The paint is just cosmetic (and a bit messy), but the other issues are concerning given that we’re two-stories in the air when we’re on it.

As I was walking around, potting my plants, I heard a crack and felt a board give under my foot.  I let out an involuntary gasp and imagined one of my legs dangling through a hole in the deck!  That didn’t play out in actuality, but it was enough for me to call Jeff out and start a more serious conversation about replacing this deck in the future.  We can at least start getting some quotes, so we have an idea of how much it will cost and bump it higher on the home improvement priority list. 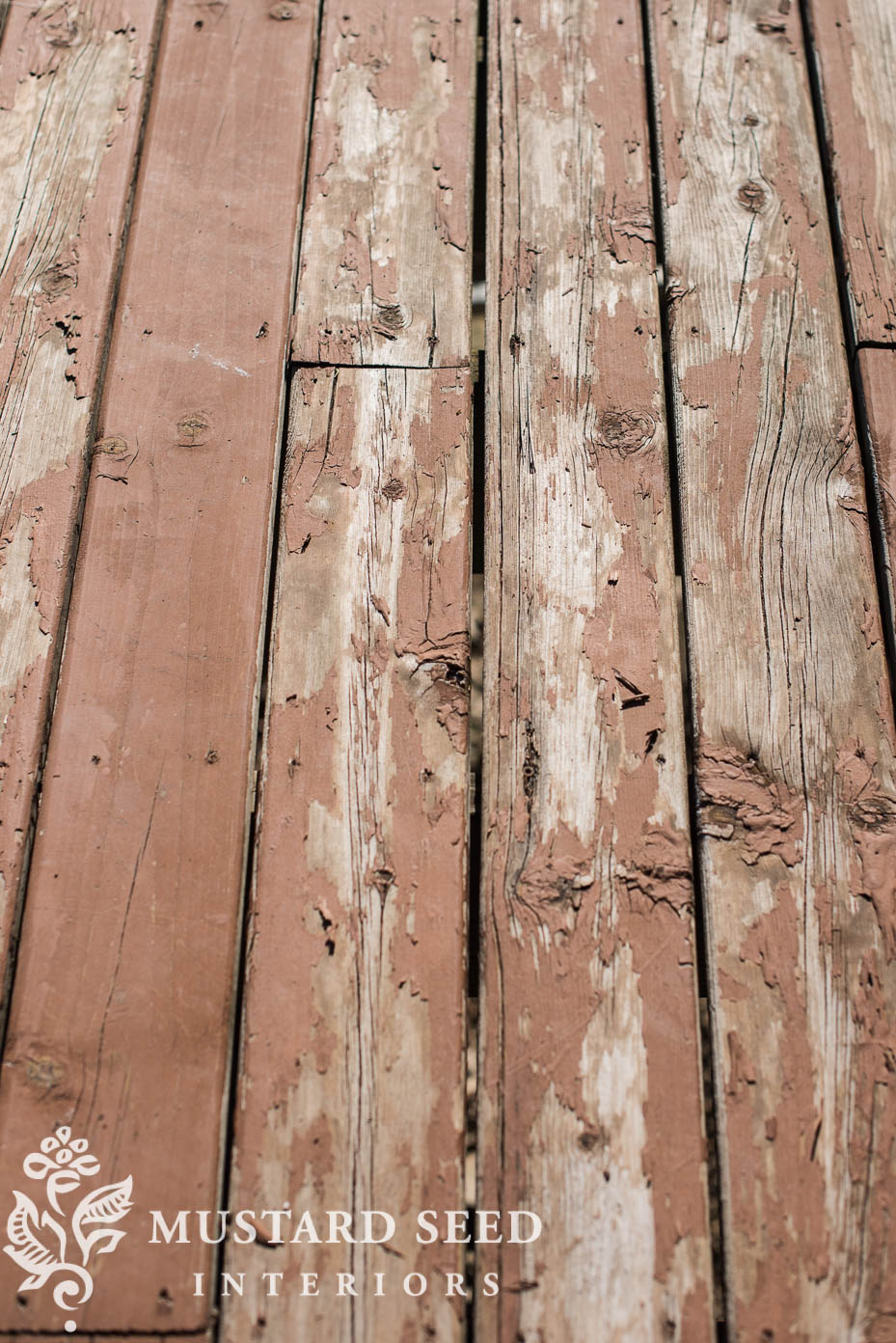 Anyway, back to the plants.  I also bought a few thyme plants to nurture inside. 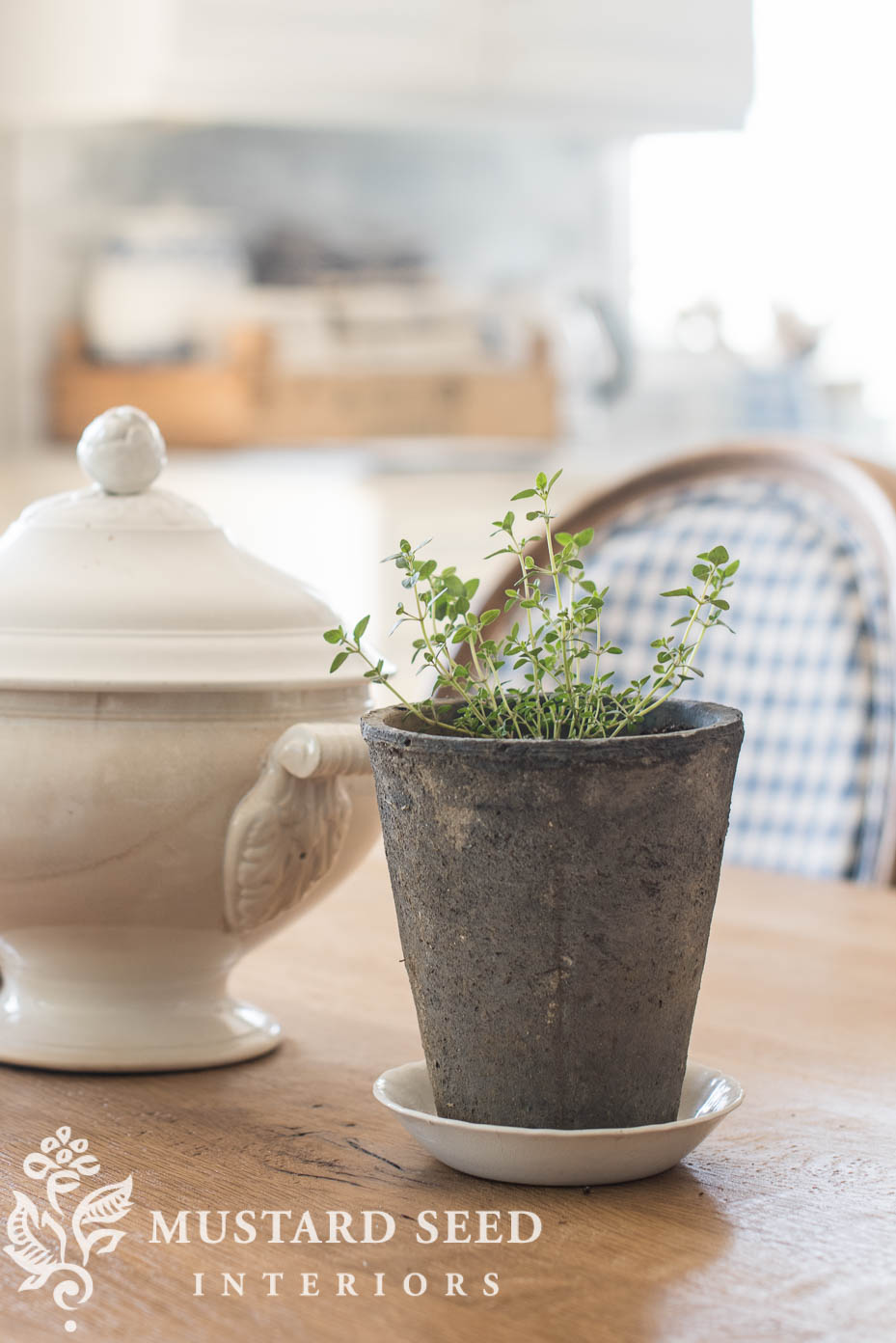 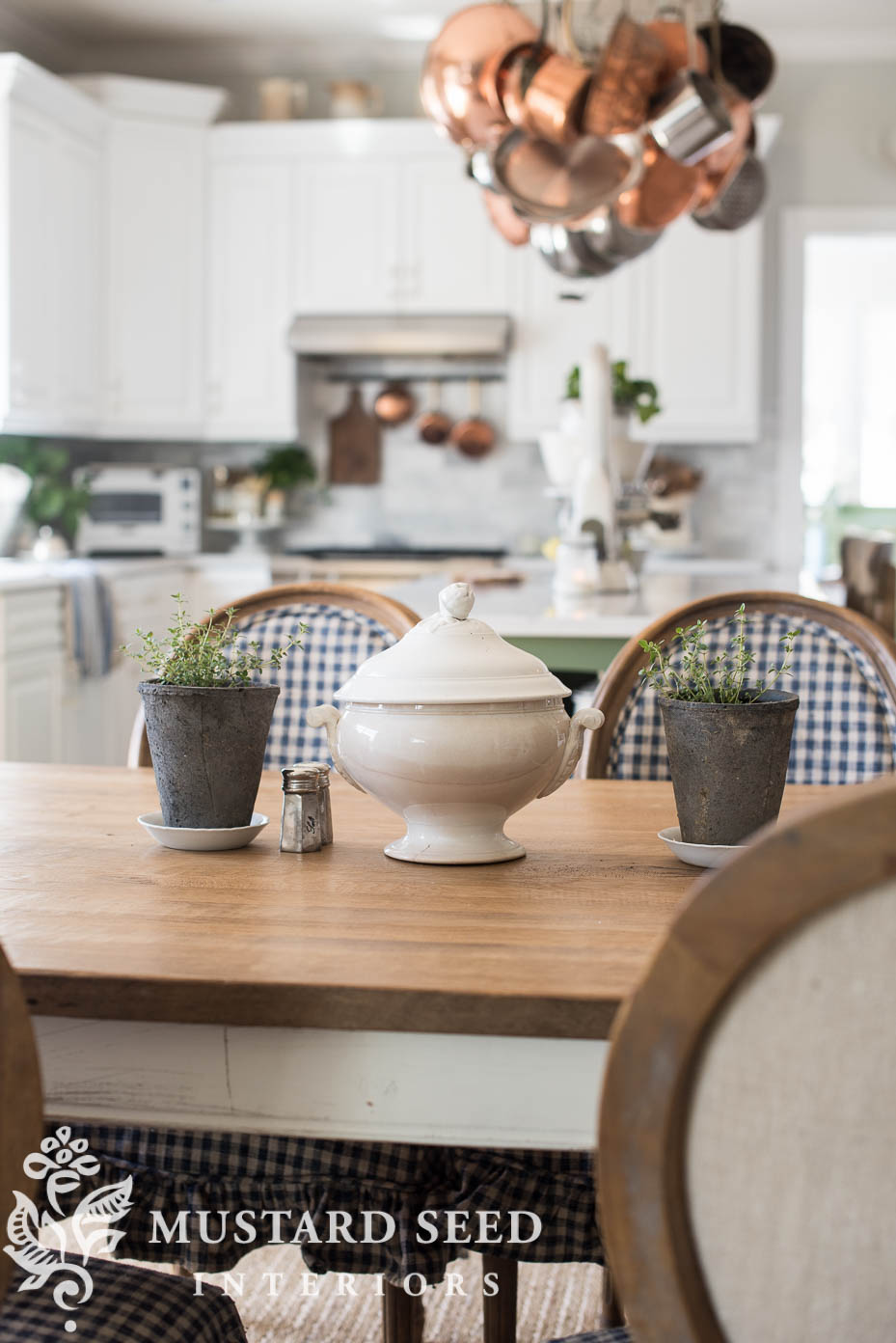 I puttered around most of the afternoon, potting, watering, and making sure everyone was set up in their new home.  It felt almost like a normal weekend and was just the pick-me-up that I needed. 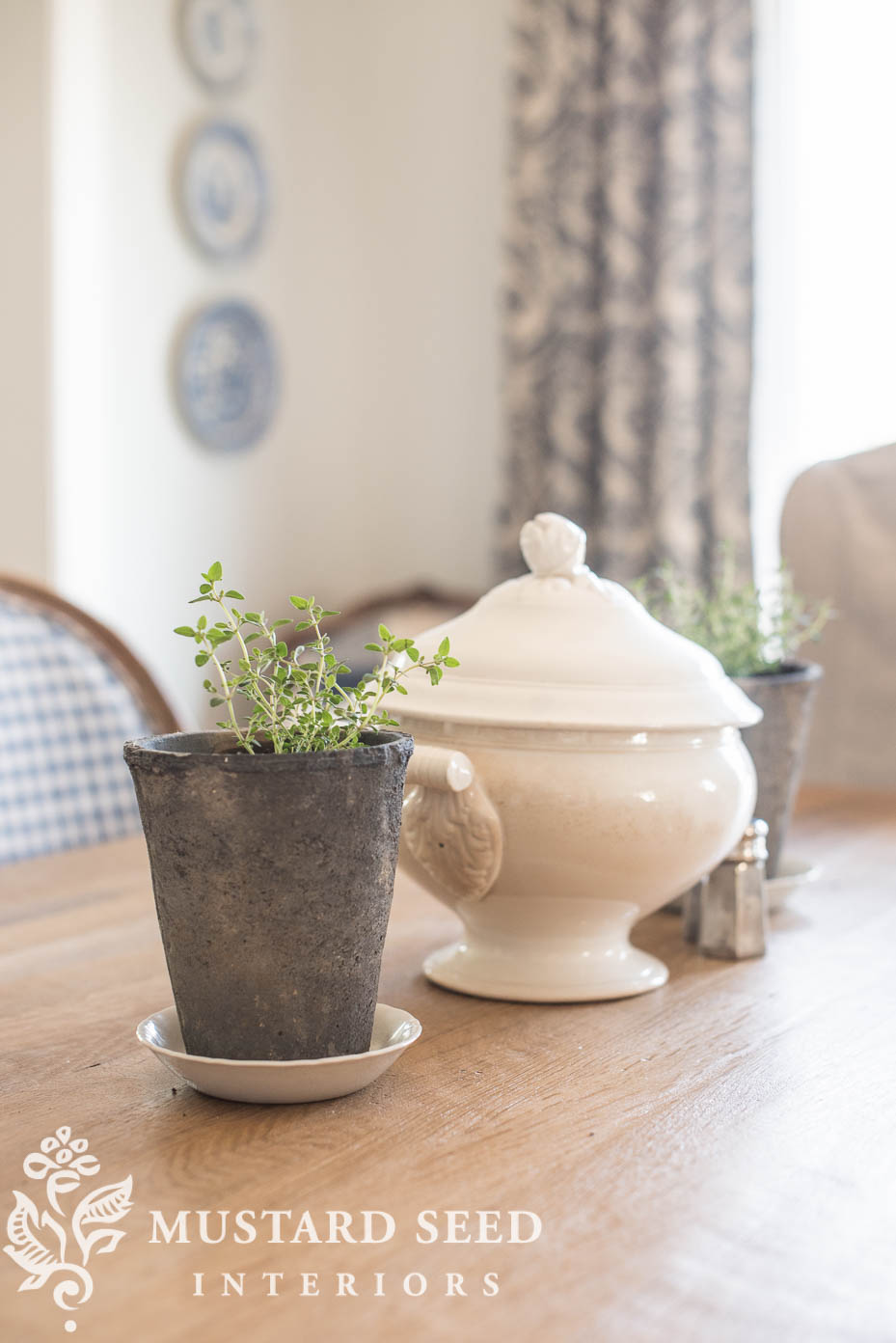 What’s been a good pick-me-up for you these days?