how to make a gathered sink skirt

I actually made this sink skirt and shot a tutorial for it over the summer, when I was working on a flurry of projects for my book (coming this fall.)   It was supposed to be a tutorial for the book, but I decided not to add it in.  There were a few reasons for that…

1 – I couldn’t get a really great shot of it, because the bathroom is so small, the lighting is poor, and the mirror would reflect the brightly lit foyer.

2 – I wasn’t sure if it really was a good project.  I sort of made it up as I went along, literally using materials I had leftover from other projects.

4 – I wasn’t sure it would be practical long-term.  I even planned on making a new one almost immediately after finishing this one.

But, it grew on me and we’ve had the sink skirt in our bathroom now for about eight months and it’s doing great.  So, I thought I would share the tutorial here on the blog. 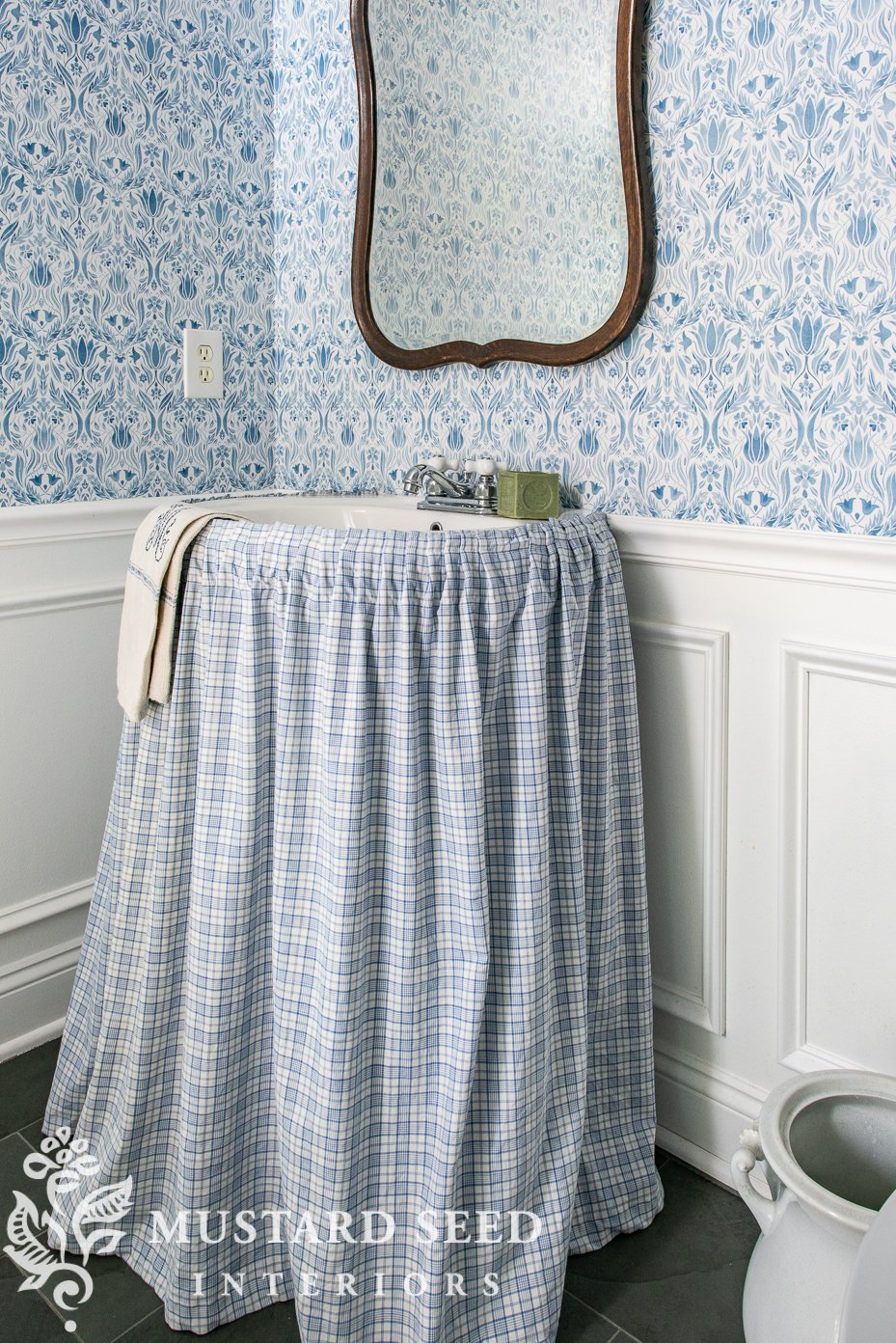 Before we get into the sink skirt tutorial, can I just say that this bathroom makes me happy?  It’s so fresh and cheery.

So, to make the sink skirt, I used a remnant of an antique German duvet cover.  It had some burn holes in a corner, so I was able to get it for a good price several years ago.

To determine how much fabric you need, measure the height and girth/width of the sink.  You’ll need the height measurement plus a few inches (I left about 8″) for hems on the top and bottom.  You’ll need 2 1/2 – 3 times the width, so there’s plenty of fabric to gather.  It is a skirt after all and I have to admit that I’ve never grown out loving a swishy, twirly skirt.

Hem the sides, top, and bottom.  To make a neat hem, I’ll fold the fabric over twice, iron the fold, pin in place, and sew. 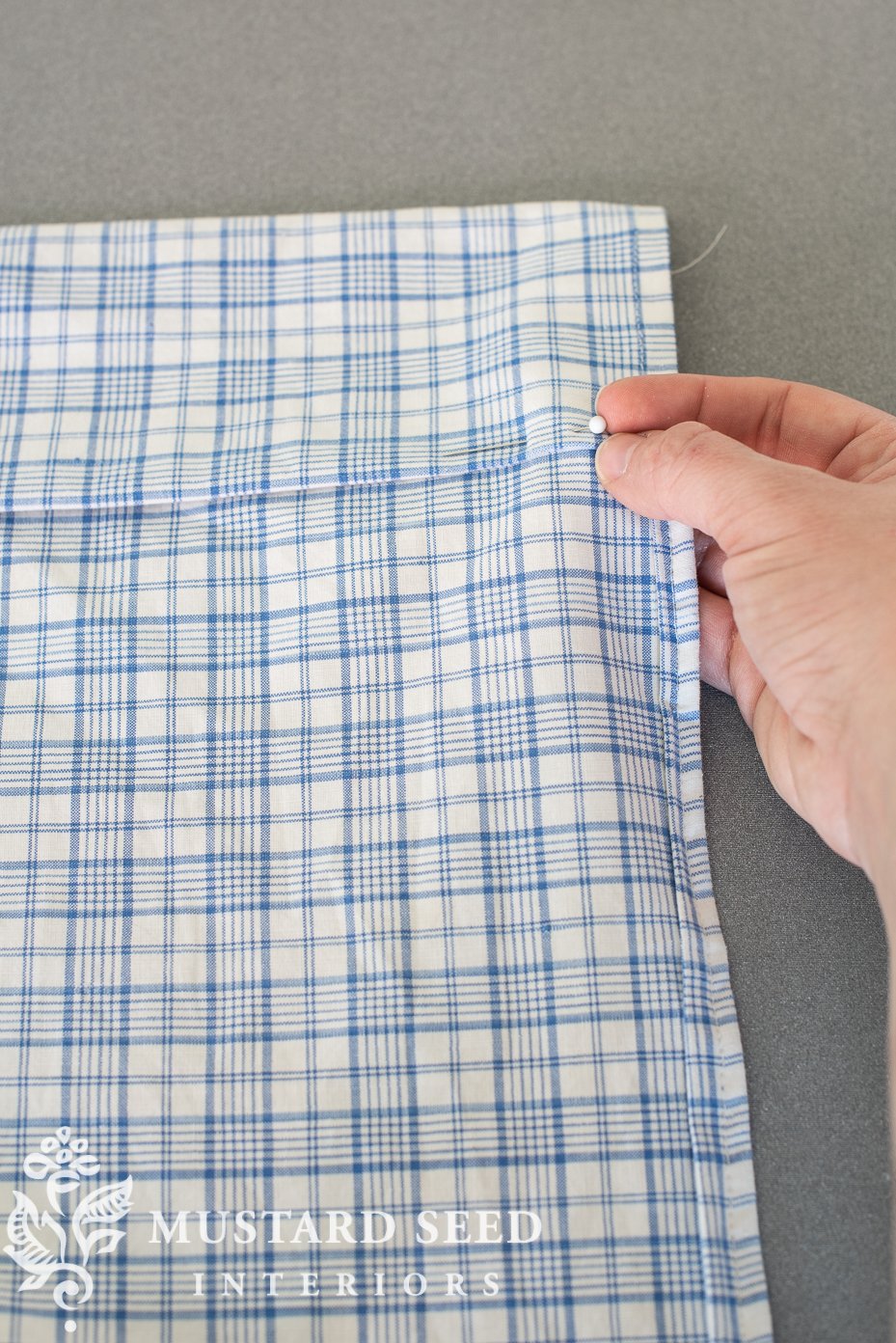 The measurement of the side hems doesn’t matter very much.  You’re simply hemming to hide the raw edges.  The top and bottom hem need to be measured to make sure the skirt will just skim the floor.

Once hemmed, cut a piece of pencil pleat tape to the width of the skirt and pin it along the top, leaving about a 1/4″ gap at the top.  The piece of pleating tape I’m using was actually cut length-wise for another project, but I just went with it. 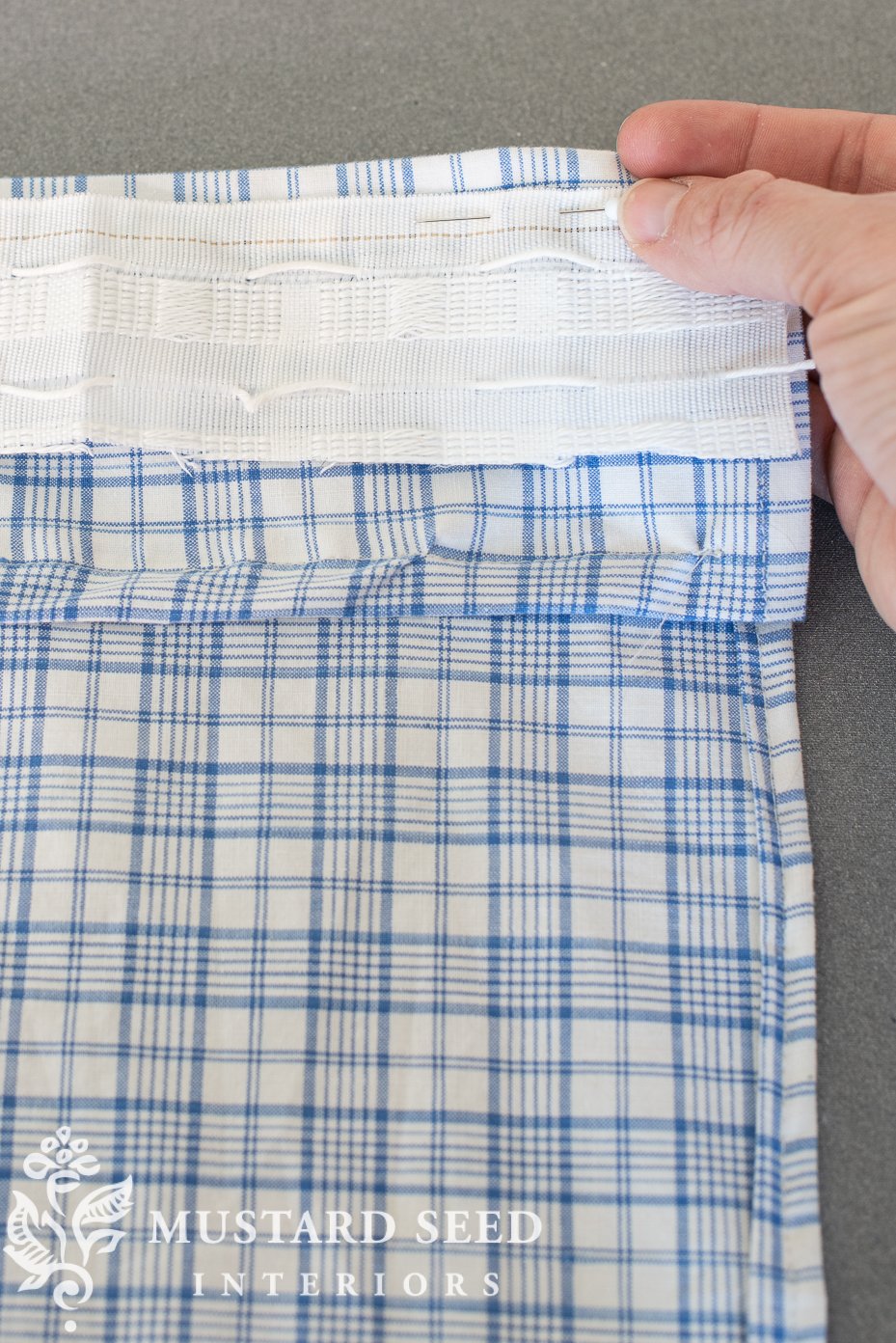 Sew the top and bottom of the tape in place. 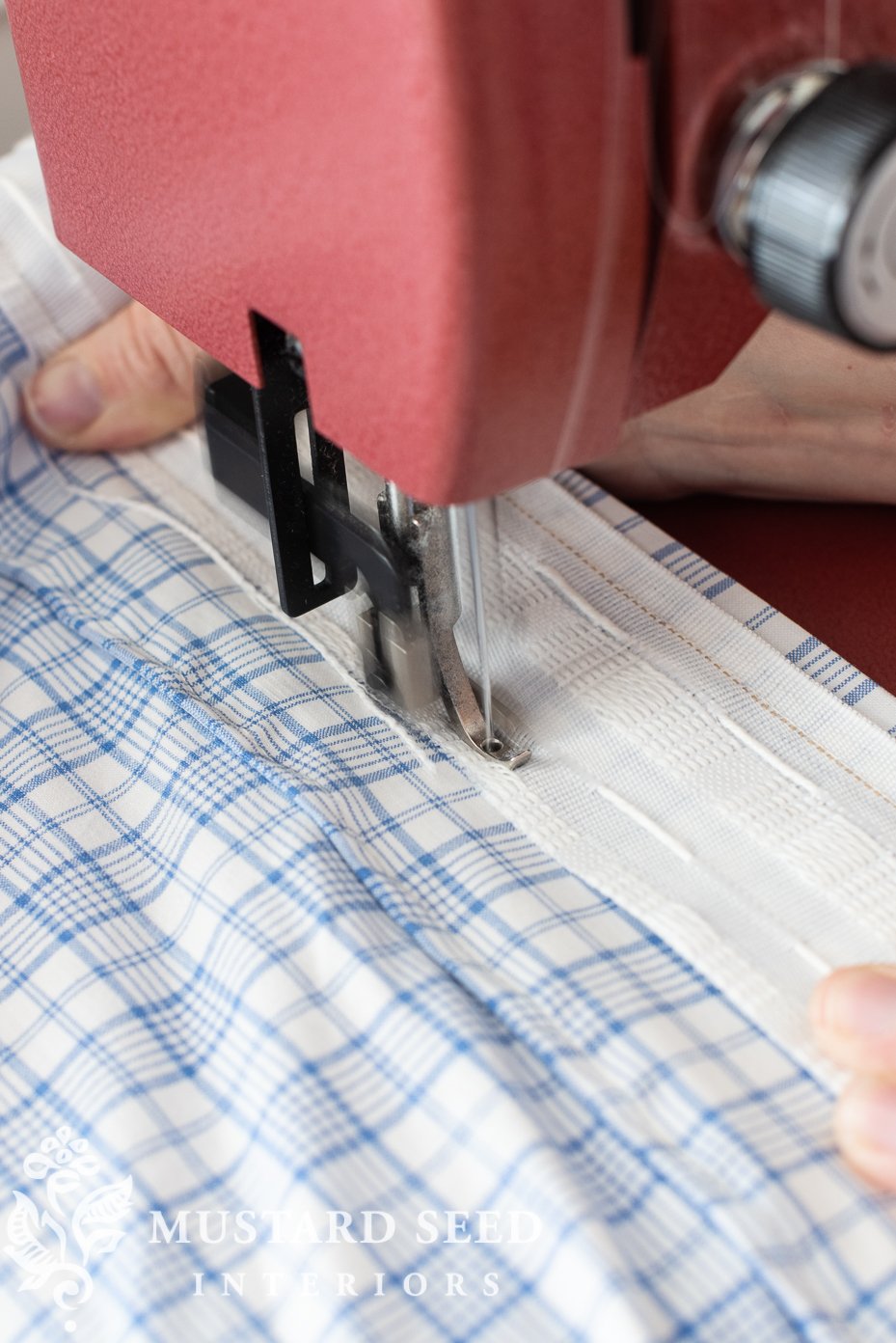 Draw the strings of the pleat tape until the gathered fabric is the width of the sink.  Tie off and tack down the strings.  Make sure the fabric is evenly distributed. 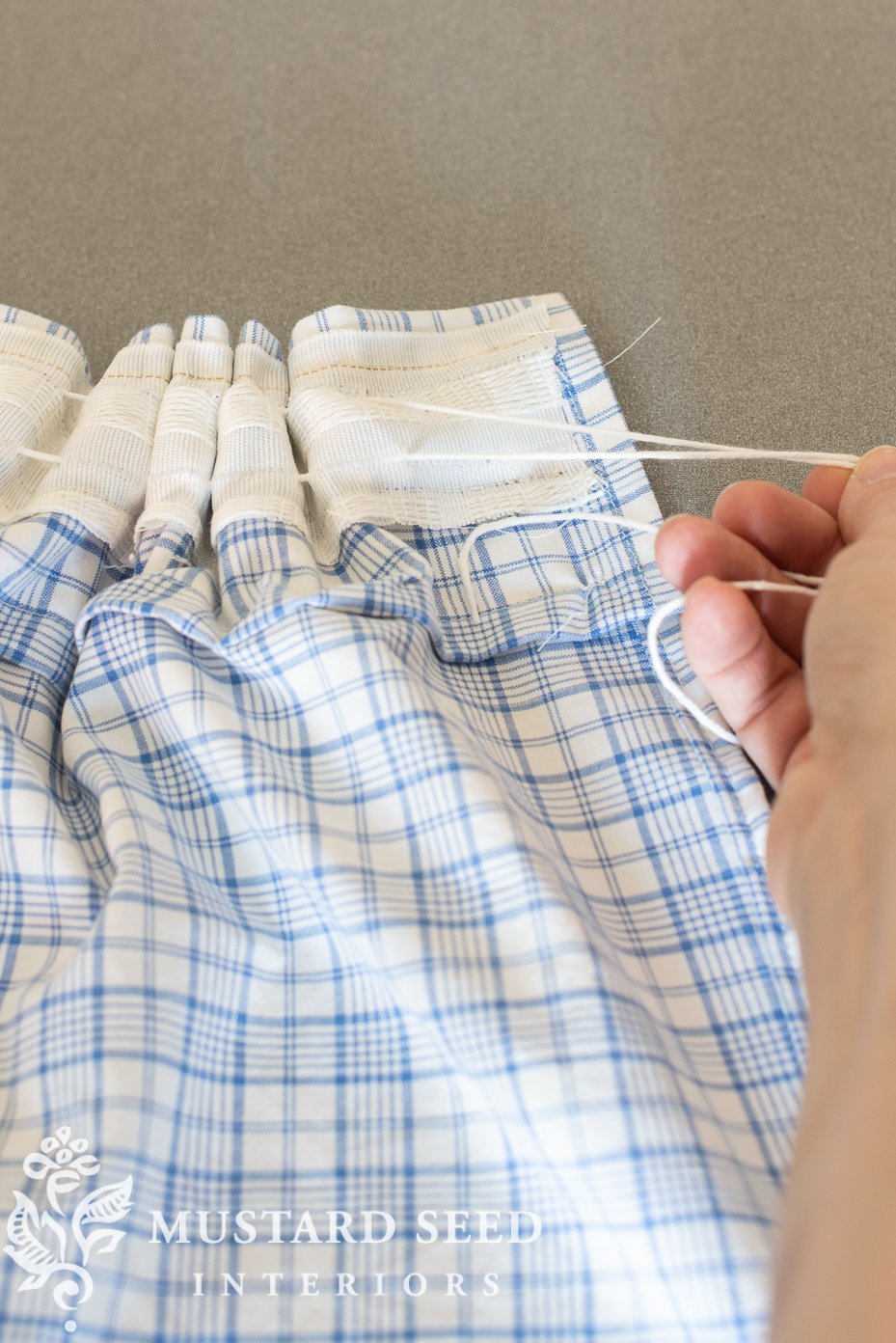 This is where the tutorial goes off the rails a bit!  I used stick-on Velcro tape for both the sink and the skirt… 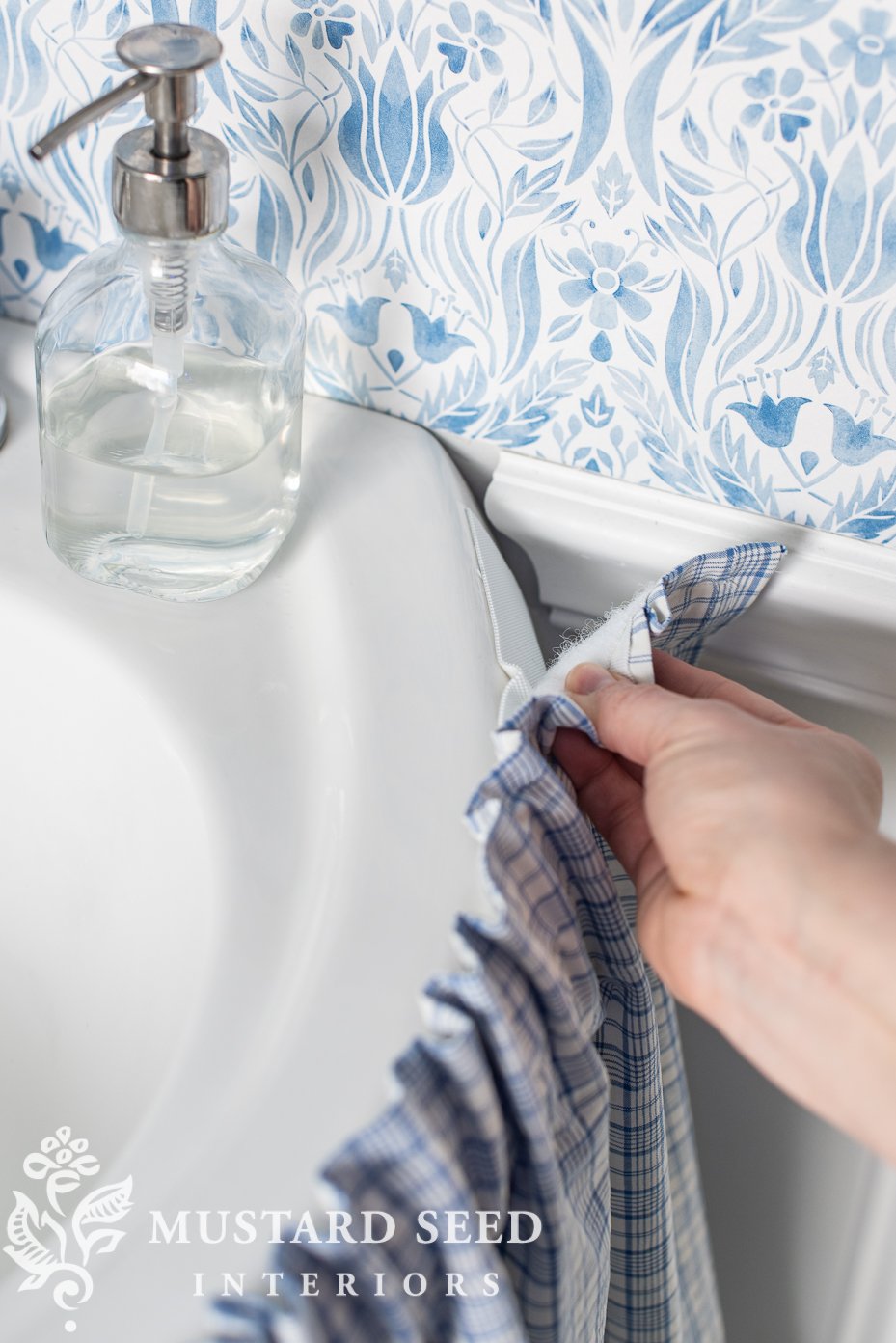 This meant the pleats sort of stuck out from the sink… 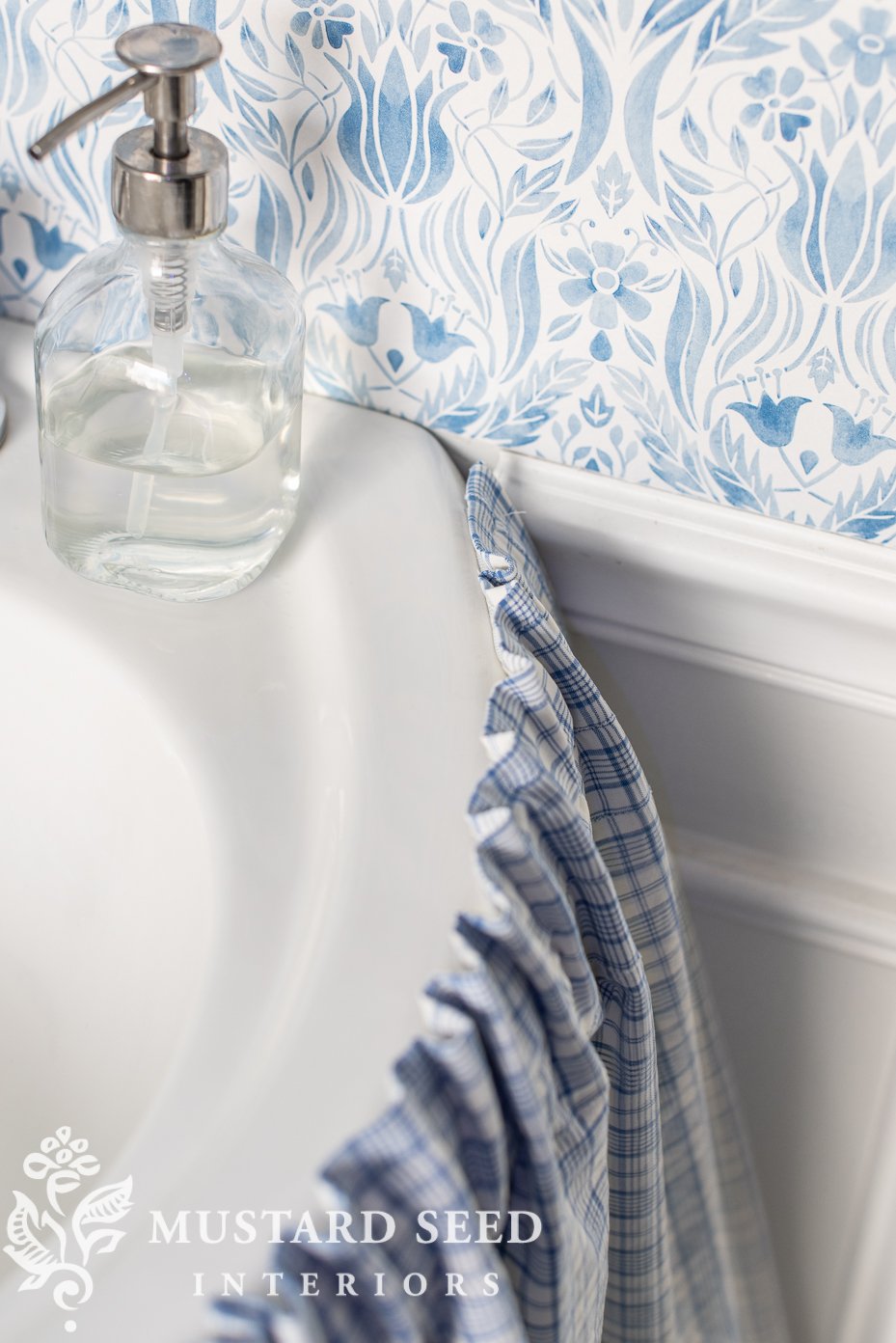 I actually liked the look of it, but I wasn’t convinced it would stay long-term.  I decided to order sew-on Velcro tape to sew it on the skirt instead.  This would flatten out the pleats and better secure the Velcro and therefore the skirt to the sink. 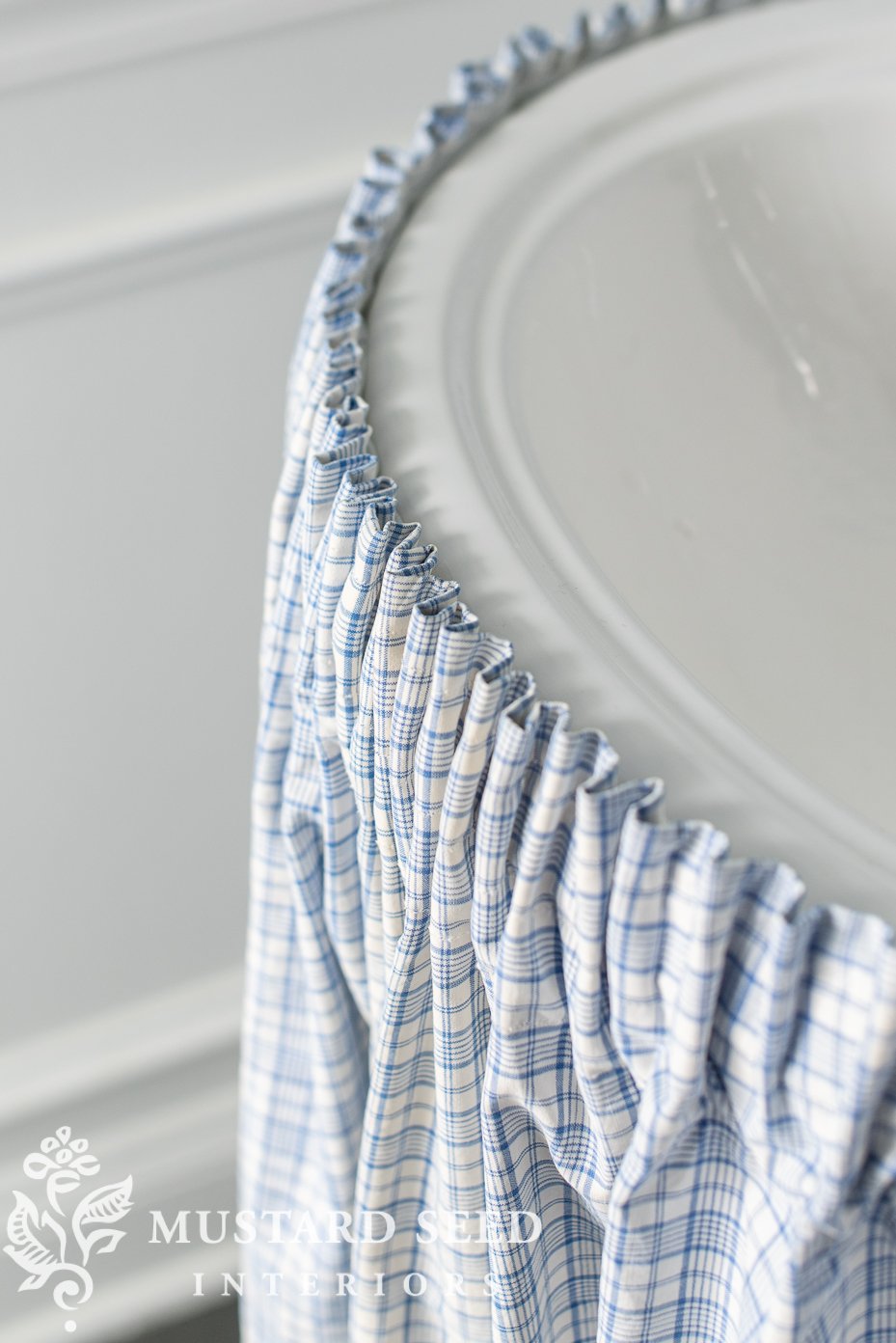 And, the pleats ended up being a little wonky when they were sewn down.  In hindsight, I would’ve just pleated the skirt by hand and skipped the pleating tape.  That’s what I was planning to do when I remade the skirt and maybe I’ll do that one day, but the wonkiness hasn’t bothered me as much as it did initially.  There’s something sort of sweet and cottagey about it.  It adds a little quirk and character to what was initially a very boring, beige suburban bathroom and a cheap pedestal sink from a big box store. 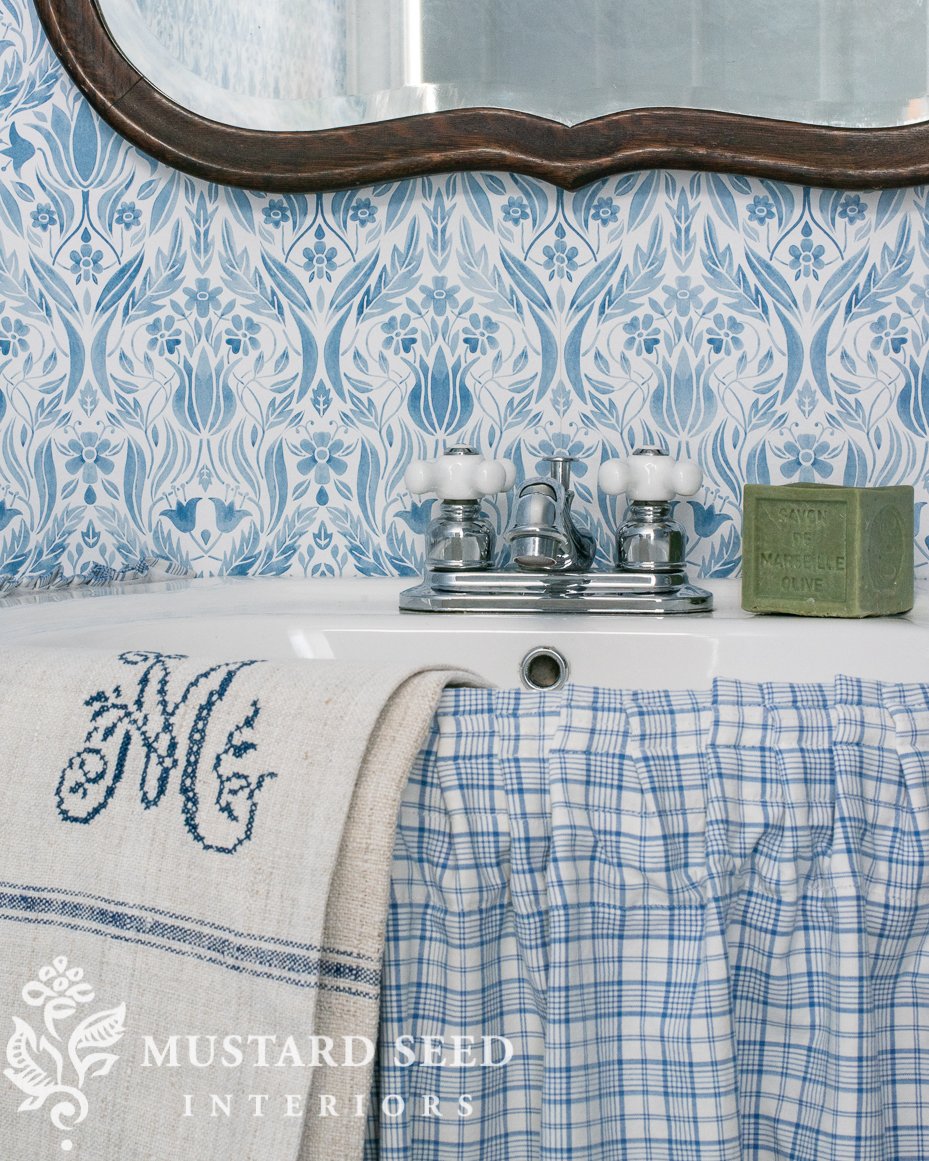 I can also tuck a small tote of cleaning supplies under the sink, which is nice to have that little bit of storage.  (Although the cats like wrestling under the skirt, too, so they often up-end the small tote and send the bottles rolling across the floor!)

So, there you go!  You can see why this sink skirt project didn’t make it into the book.  It was a good idea that ended up being an imperfect, make-do, meandering sort of project.  But, sometimes those work out and can still be inspiring…

Picture Frame Molding in the Half Bath

Preview of the Half Bath Makeover