Let me start off by saying this was supposed to be a tutorial, but it won’t be.  The reason is that I mindlessly deleted all of the process photos!!  Ah!  I try to keep my camera card “uncluttered”, so I delete all files once they are uploaded.  Well, I got a little overenthusiastic in my decluttering and deleted these files before I put them on my computer.  Not only did I delete these pictures, but also pictures for a freelance tutorial.  I redid those because I had to, but this will just be the tutorial that wasn’t meant to be.

Anyway, I’ve been looking for something to hang over my range, but I just haven’t come across anything that is just right.  I even did some thorough shopping of my house and tried a few different platters, trays, breadboards, etc.  I would hang one and leave it for a day or so and then change it out.  Nothing was quite right.

I liked the idea of having something there, so I decided to make something to use as a “placeholder” until I find the perfect piece.

Since I don’t have photos for this specific tutorial, I’ll refer you to one I wrote on making an antique sign a few years ago.  You can find that tutorial HERE.  I made this sign in a similar fashion.  The only difference is that I used this raw wood sign from Hobby Lobby (it was the perfect size for above my range) instead of an old piece of wood and I drew the lettering with chalk prior to painting it instead of using the tracing paper.

I used MMS Boxwood for the base color, white acrylic paint for the letters, and it’s all finished in MMS Hemp Oil. 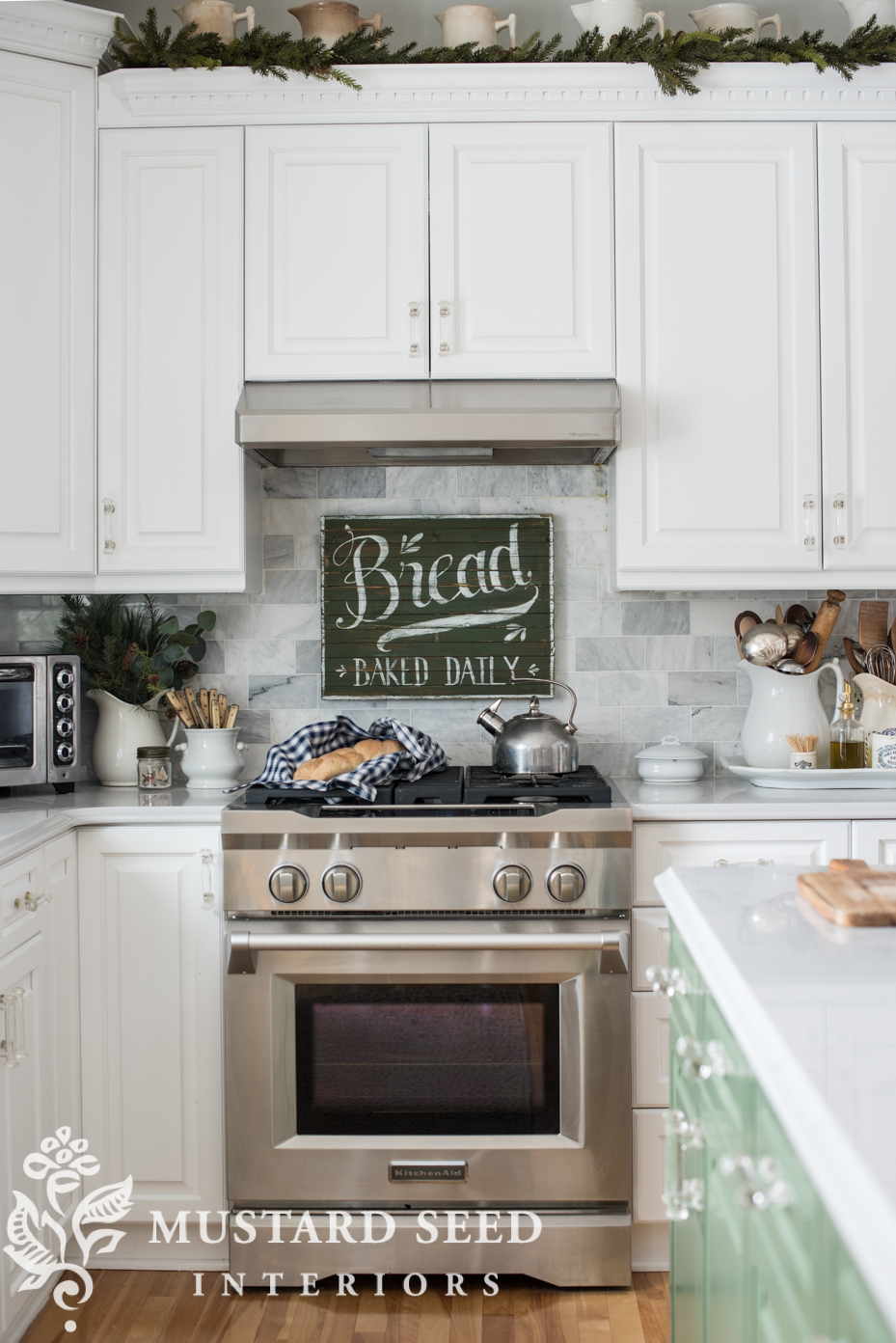 It adds just the right amount of color and interest above the stove.  The nice thing is that it was a quick & inexpensive project, so I can swap it out or take it down entirely any time.  I already had all of the paint and I caught the sign on a 50% off sale, so it was only $10. 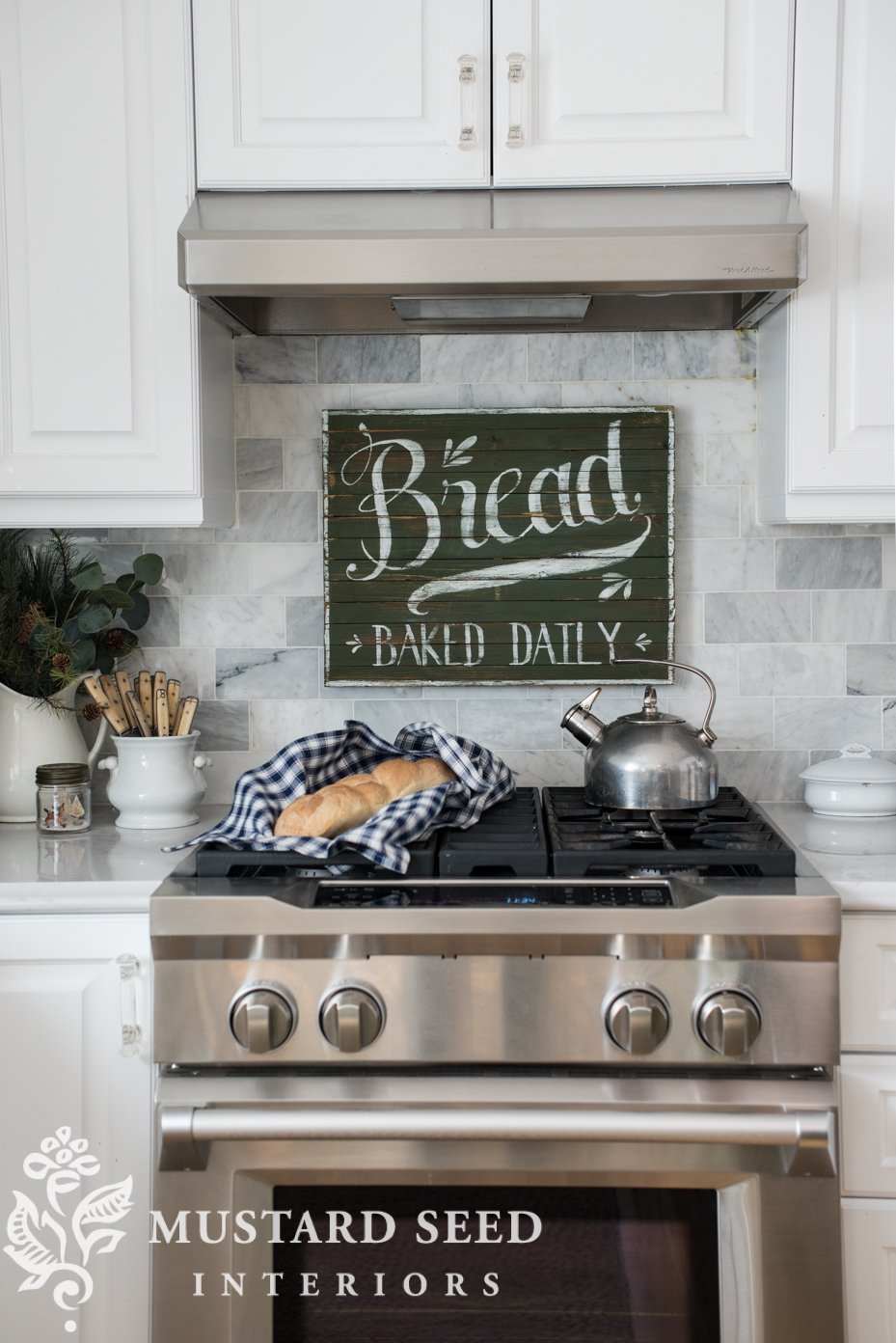 It’s hung with 3m velcro strips, so there isn’t any damage to the tile and, again, I can change it out if I find something I like better. 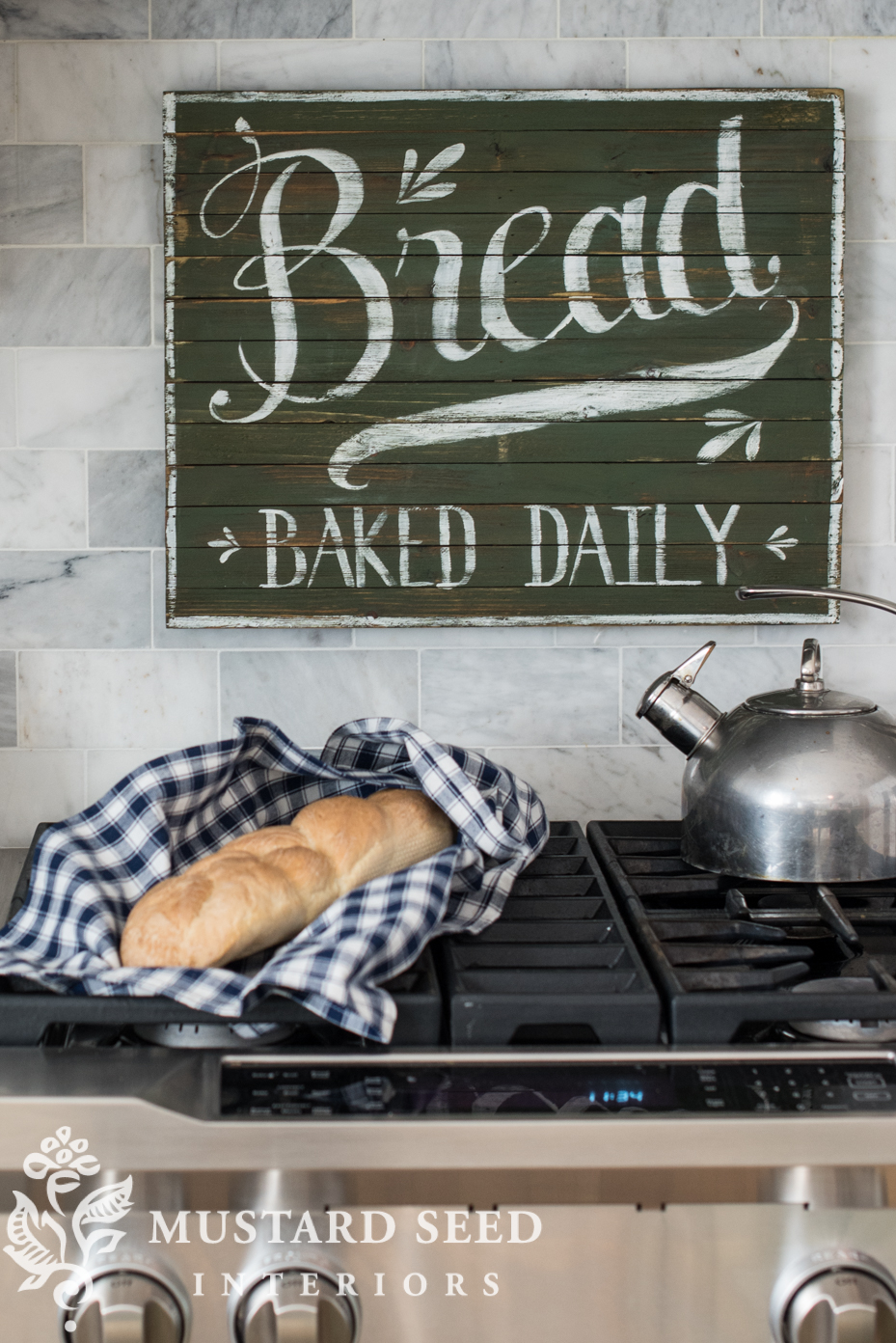 I’m definitely not baking it daily, but I did bake some bread when we were snuggled inside during the snow storm.  I used to bake bread about once a week, so it was fun to dust off my kneading and shaping skills.  I found my favorite recipe with all of my handwritten notes on it; all discoveries made from baking hundreds of loaves of bread. It’s been years since I looked at it.  I was rusty, but it was still tasty! 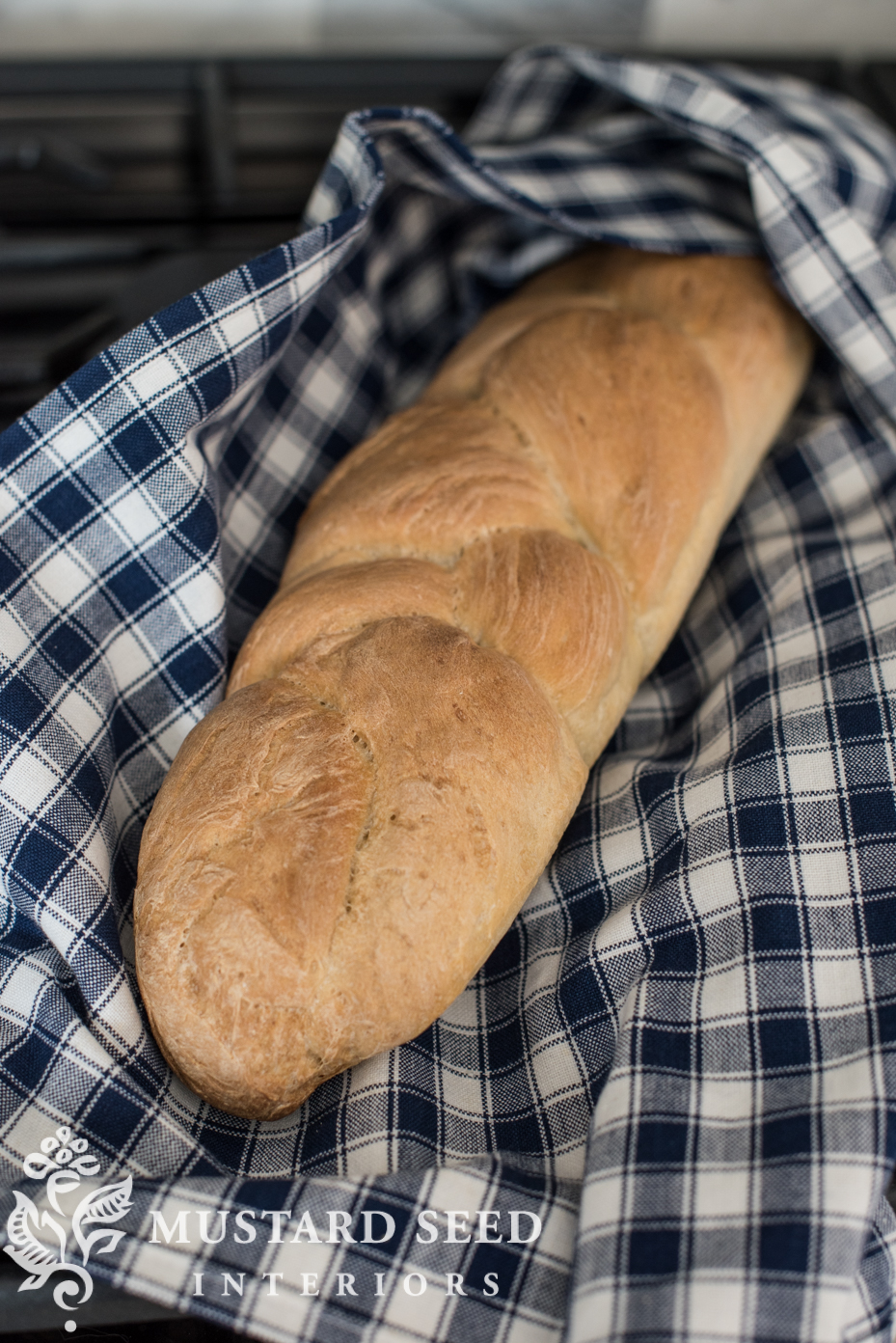 And, because it’s Christmastime, I added some greenery in an ironstone pitcher and a jelly jar snowglobe beside the stove… 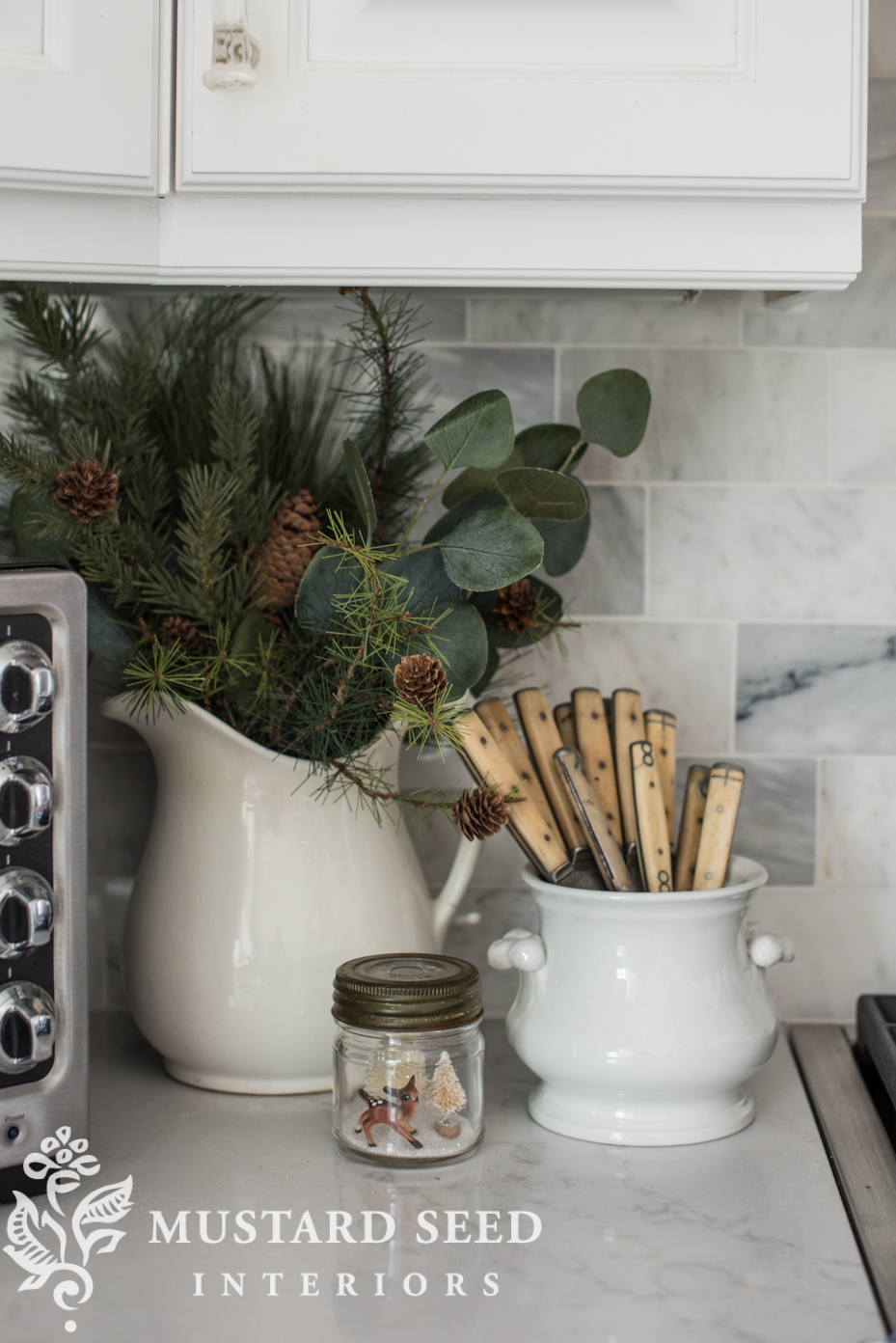 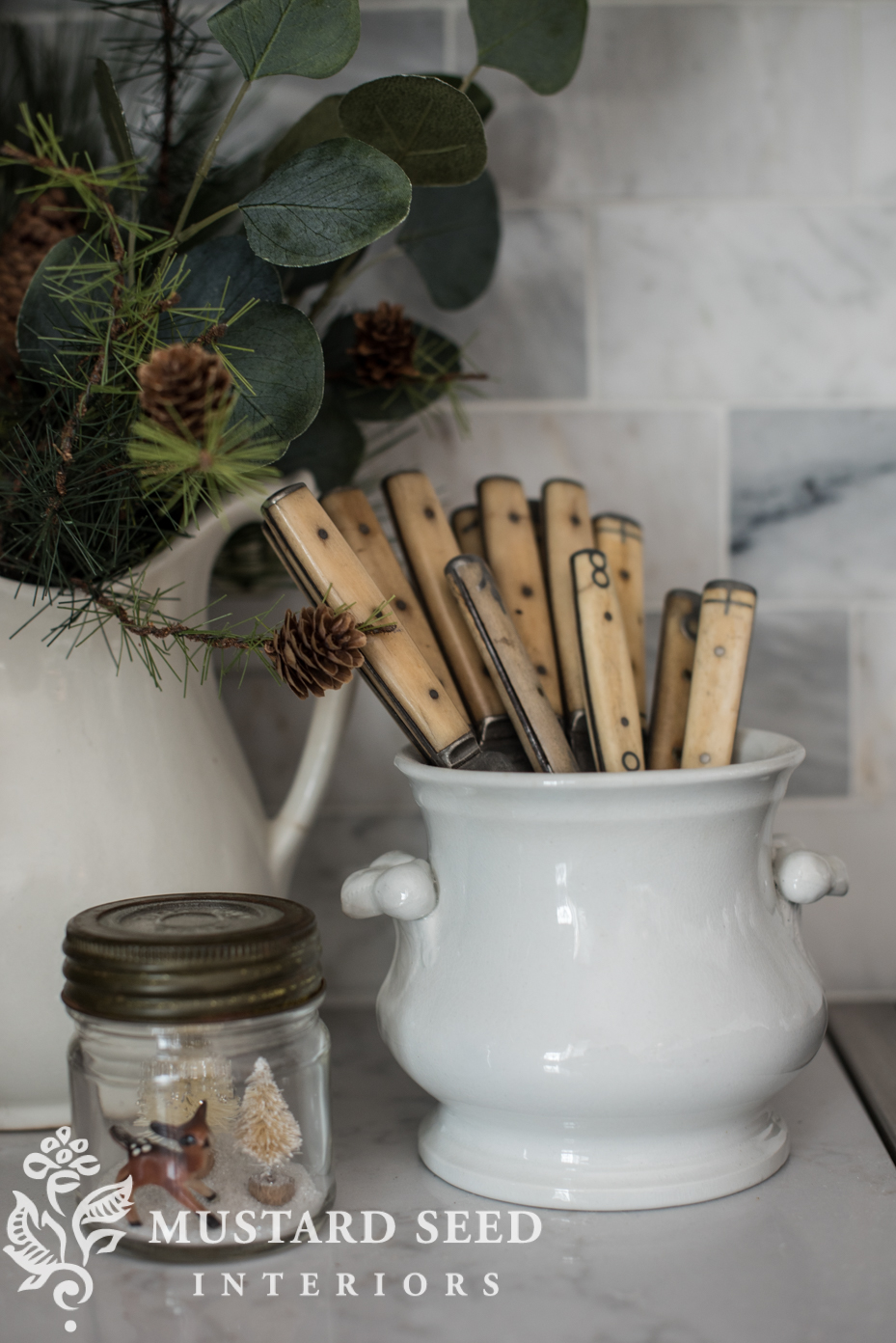 Can you tell how much I’m enjoying my home during this season?