The tile in the foyer is finished and we are one step closer to having the foyer and powder room makeovers complete!  So, there is still more to do before a reveal, but I thought I would share how this space is looking currently and also the details on the Montauk blue slate tile as well as our grout choices. 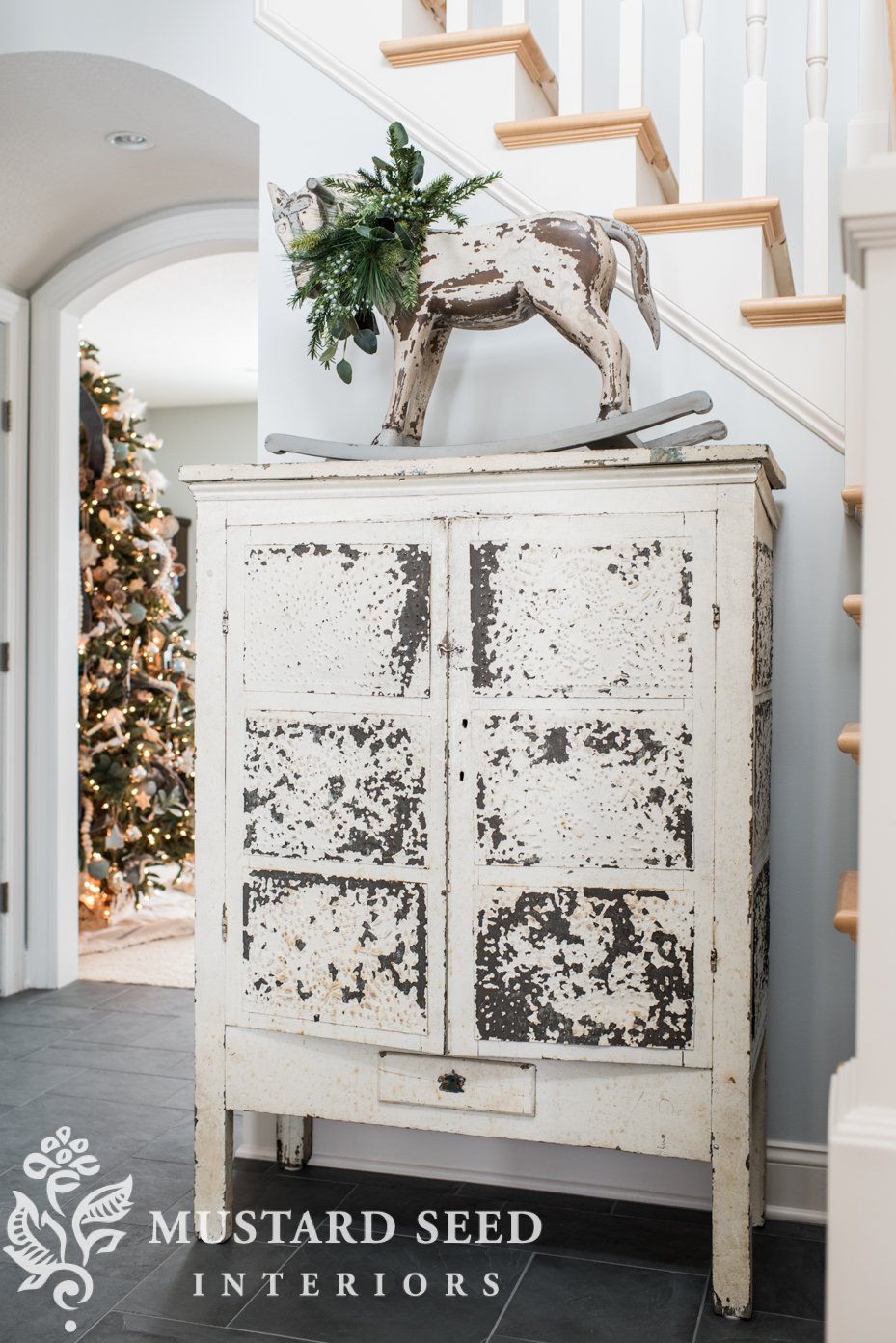 I wanted to use a material that fit the traditional style of the house, but also worked with my aesthetic, which lands somewhere in an American farmhouse style meets European influence vein.  What came to mind to meld all of those styles AND to stand up to shoes and boots during a Minnesota winter AND a dog AND two boys were slate and brick.  I had considered a limestone, too, but I just couldn’t picture it.

After talking to the professional who was going to install it and getting Jeff’s opinion, I settled on the Montauk Blue slate tile.  Brick was going to be much more labor-intensive (and therefore expensive) to install and Jeff wasn’t excited about it.  As I started shopping for slate, the tile expert cautioned me about getting slate that was low quality.  Some are very uneven and prone to flaking.  He said he won’t even install low quality slate.  So, I did a lot of research, ordered some samples, and ended up getting the Brazilian Gray (Montauk Blue) Cleft Slate Pattern Tile.  (Just an FYI, this isn’t sponsored.) 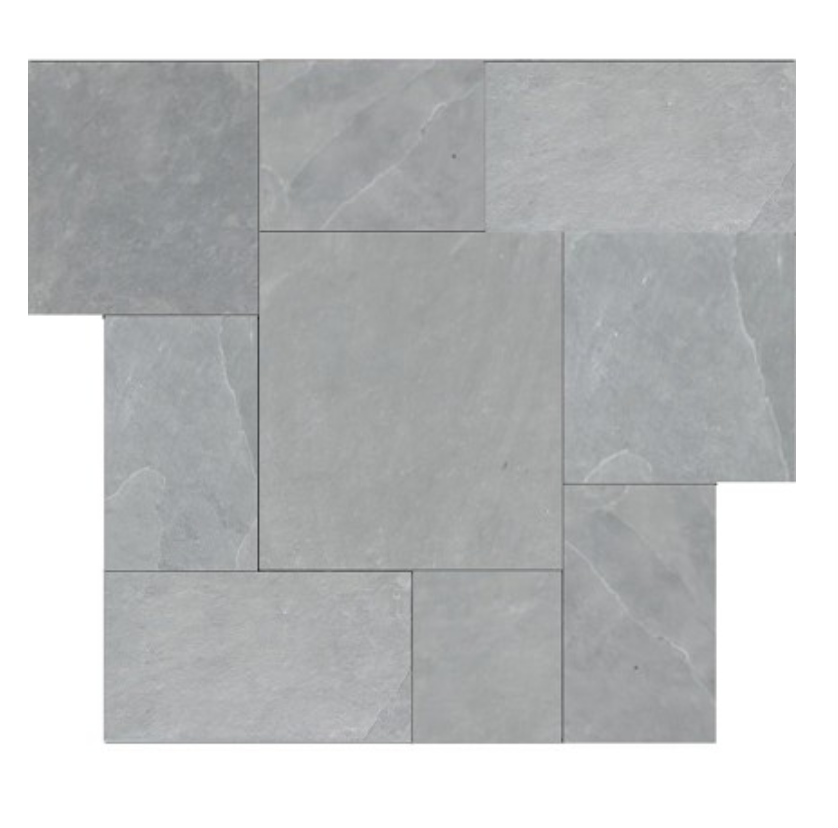 And yep, I ordered it online.

Here is the blurb about the tiles from the website, “These Brazilian Gray/ Montauk Blue Slate Tiles are calibrated for quick and easy installation and have a smooth surface and uniform thickness. Their thickness is 1/4″ with a completely flat machined back. The tiles are naturally slip-resistant. The slate tiles are suitable for residential and commercial areas especially high traffic areas. They are suitable for exterior application in freezing and non-freezing climates”

The description sounded good and the sample looked and felt high quality.  I got the approval from Jeff and the “tile guy”, Chad, and placed my order.  Unfortunately, the patterned tile was on backorder, but Jeff and I felt like it was worth the wait.  Now, I have to give credit where credit is due and tell you that Jeff was the one who was insistent on the pattern.  I would’ve been fine with offset rectangles, but he didn’t waver.  He’s rarely opinionated when it comes to decorating choices, so I listened.  And, he was right.

The pattern did make the tile a challenge to fit together, though!  To make sure we got it right, I printed up about ten copies of the design, so we could lay it out on the floor and see the repeat. 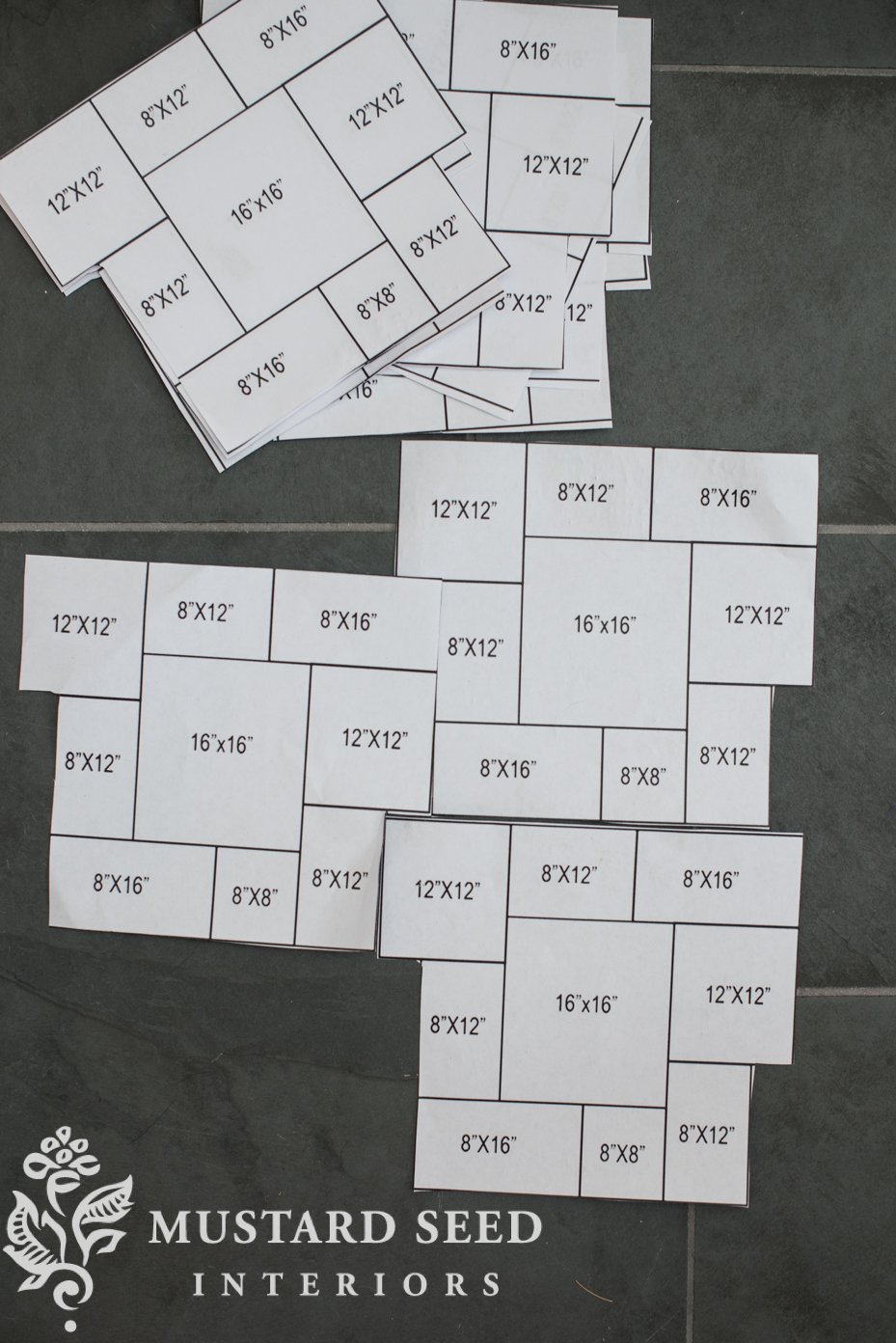 I love the pattern, because it looks random, even though it’s not.  It took Chad and his co-worker about 6-7 hours to install it and they did a fantastic job.  It was amazing to me that they were able to demo the old tile and lay the new without having to even remove the quarter round! 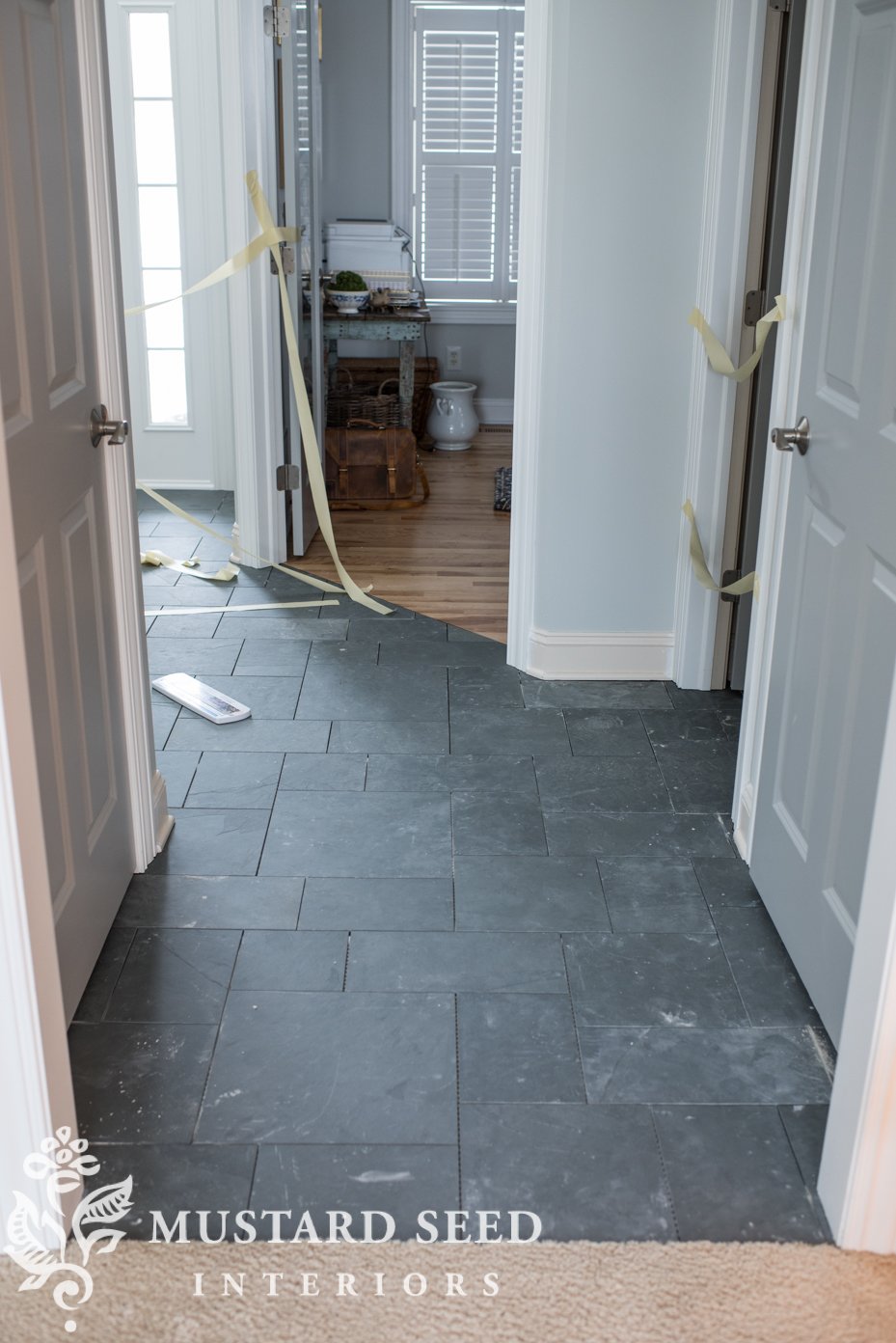 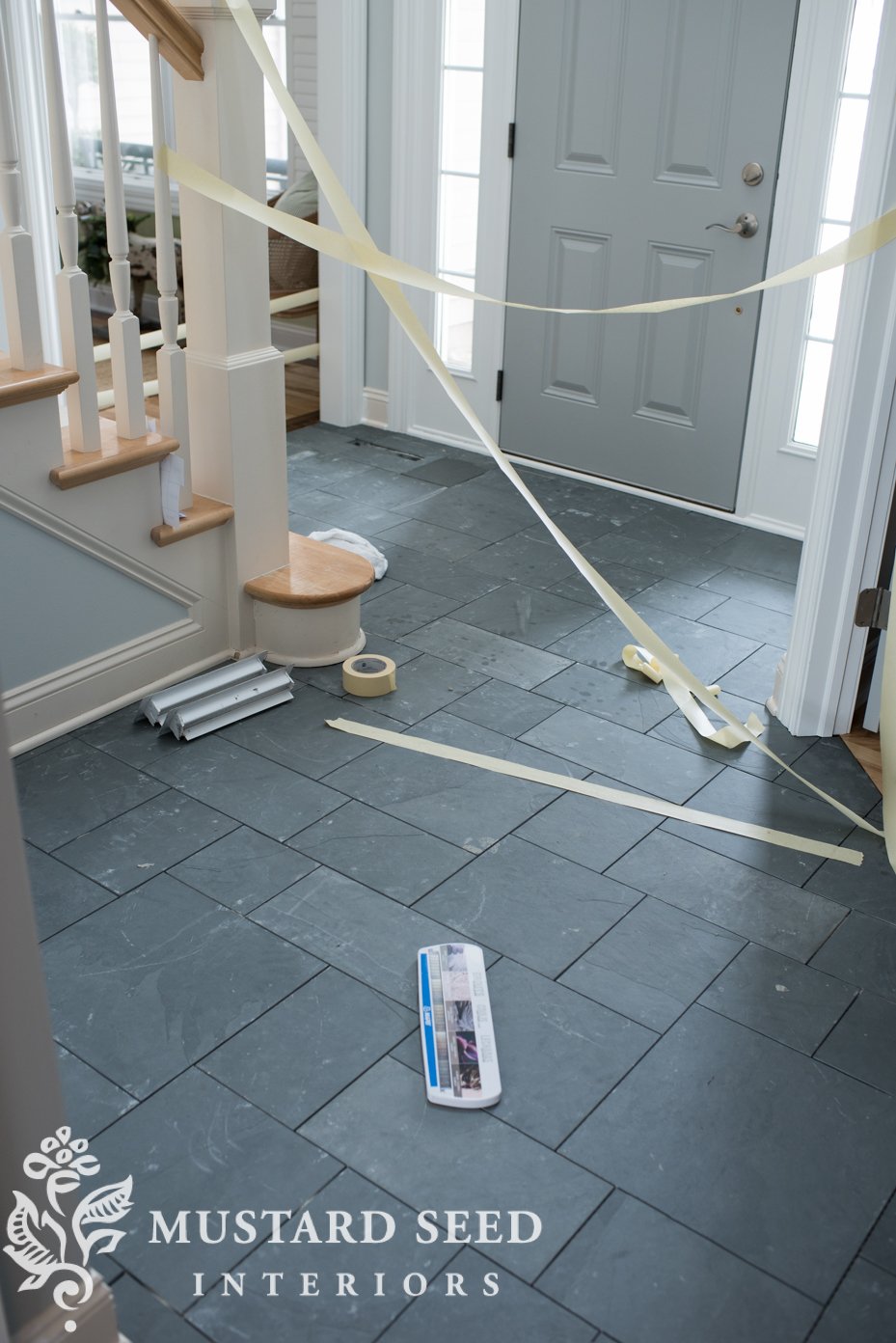 They sealed it with a matte stone sealer (Enrich & Seal Stone Enhancer & Sealer) and then applied the grout.  I selected the grout color “Iron”.  It’s a warmer mid-to-dark gray that was a little lighter than the tile color.  I wanted a bit of a contrast, but not too much.  I also wanted a darker grout, so it doesn’t show dirt. 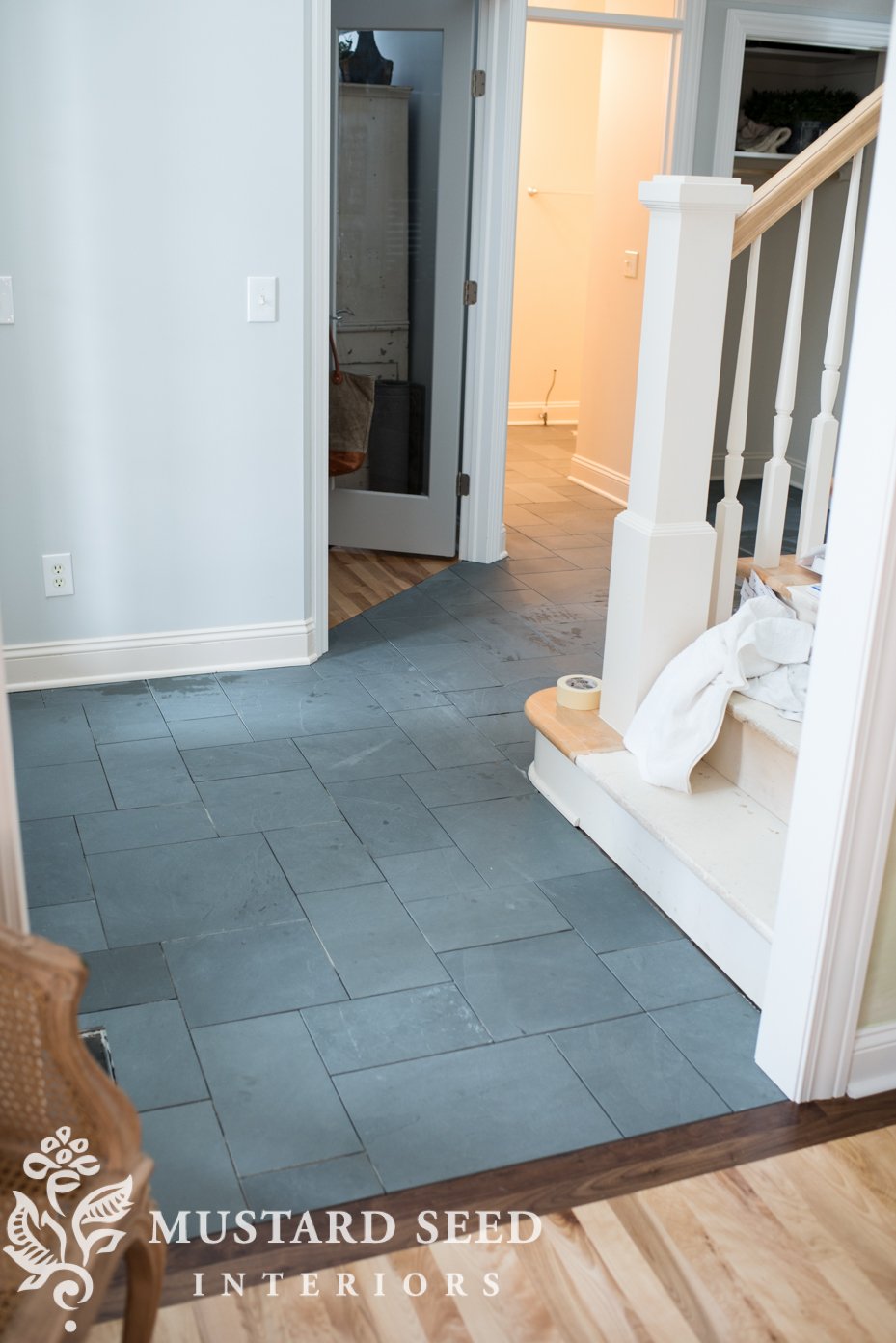 And here is how it looks finished… 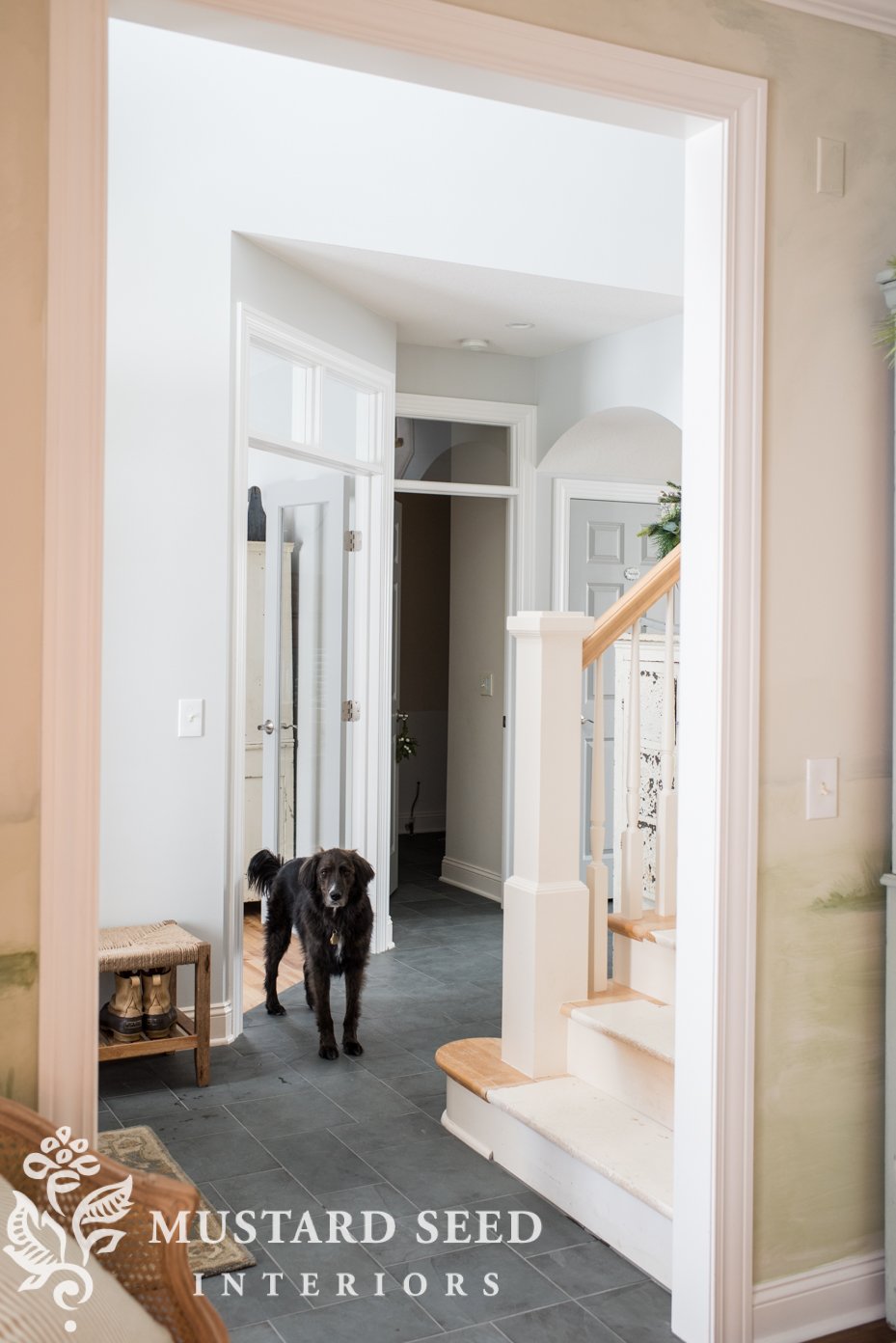 Well, the tile is finished.  I still need to prime and paint the baseboards (I did that today, but these pictures were taken a few days ago).  I also need to hang some things, finish the bathroom, and the steps will be done in January.

I ordered a 3 x 5 braided jute rug to put by the front door.  I couldn’t fit a rectangle 3 x 5 because of the air vent, but an oval one will work.  I want to have a larger place to kick off wet shoes and snow gear.  We try to come in through the laundry room/mudroom when we’re really wet/snowy/muddy, but that doesn’t always happen.  (As you can see from the drips on the floor!) 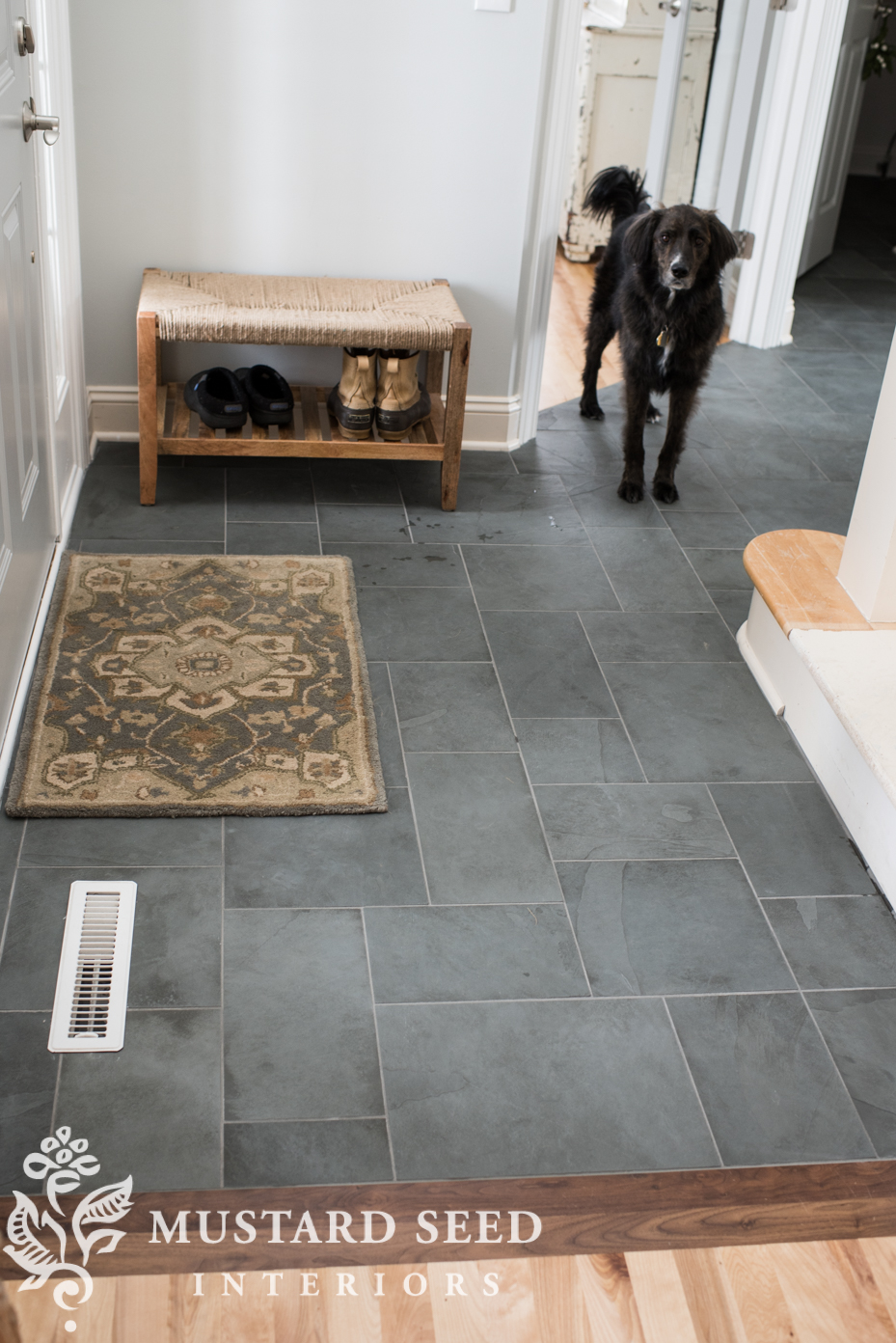 It’s hard to really capture the beautiful texture and variation of the slate in a photo, but you can sort of see it in the picture below, as the light passes over it. 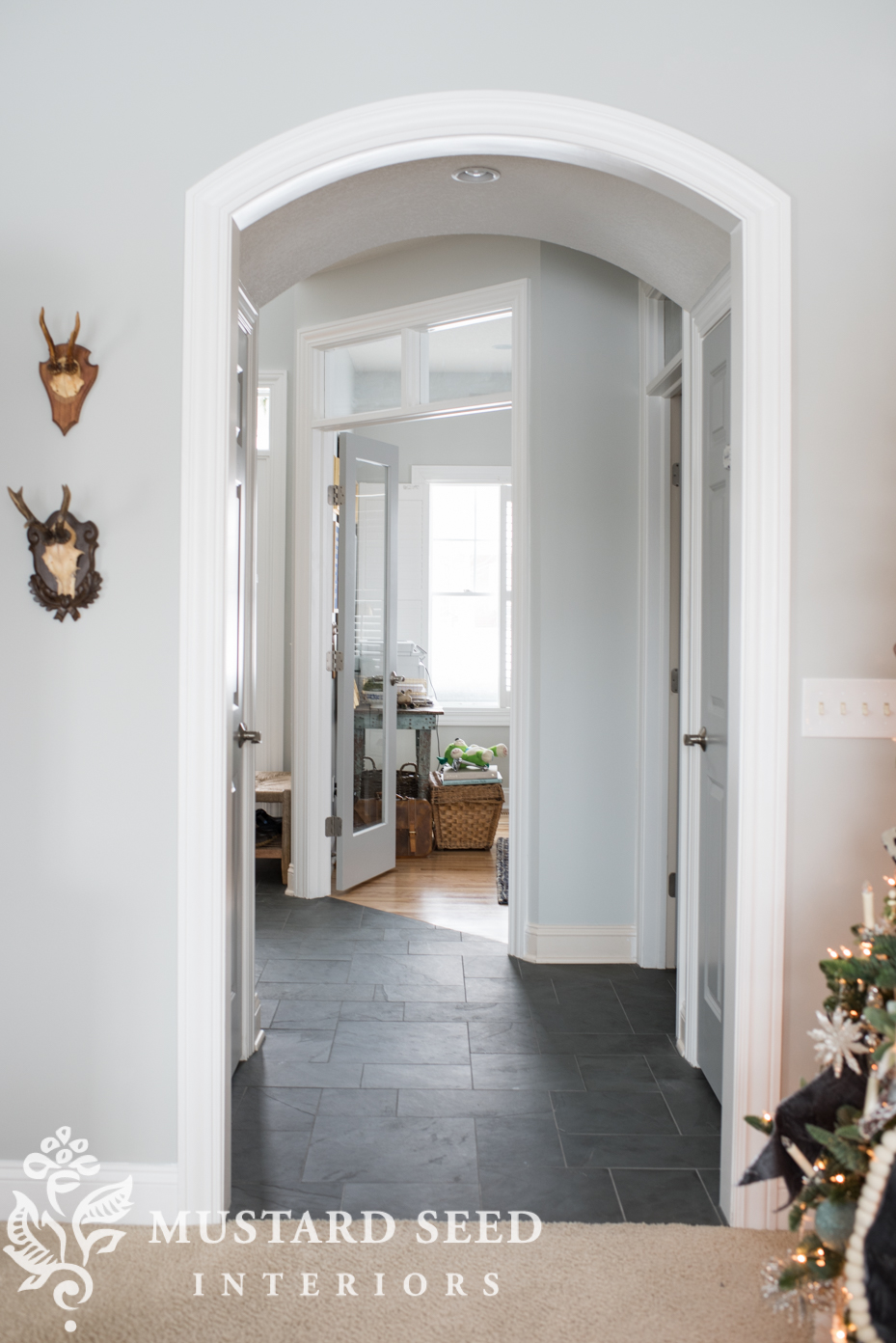 Even though it’s gray, it adds a lot of warmth and definitely has more character than the large beige tiles that were there before.  We’ve made a lot of changes to this house, but Jeff & I feel like this is one of the best.  It’s transformed the foyer from a ho-hum space you just walk through to a proper room that demands some attention. 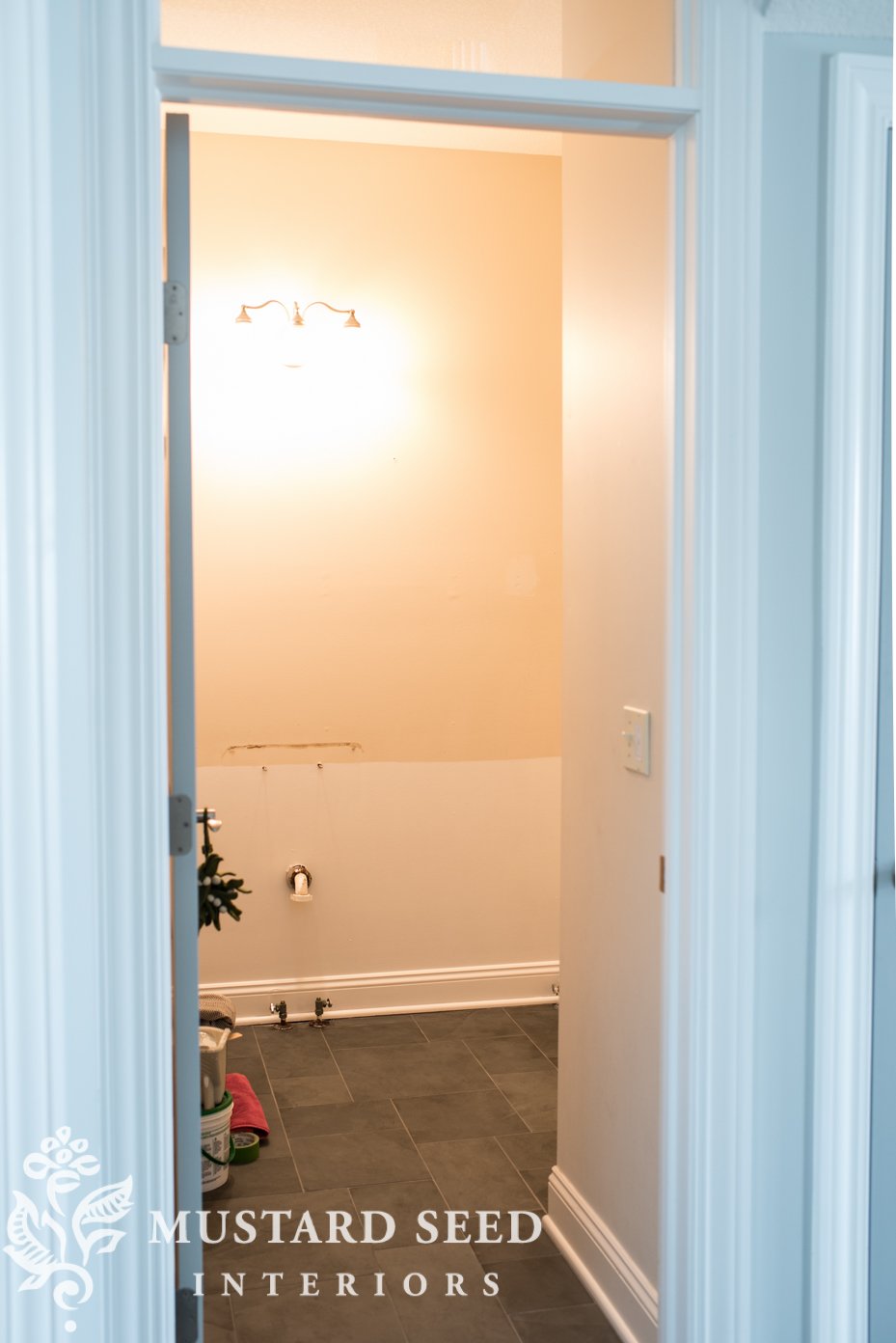 And, even though it’s a tiny room with just a sink and a toilet, I am very excited to bring together the details of the half-bath.  I was painting in there today and it’s already looking like an entirely different room!