I always have to fight the urge to wait to post something until it’s completely finished.  As I shared in yesterday’s post, I went to a concert over the weekend where Jason Gray performed a half-written song.  This also brings to mind that some of my favorite pieces in the Musée d’Orsay and the Louvré were those that were simple studies and unfinished works.  Much of what we experience in our life is unfinished or half-done.

So, it is in that spirit that I am sharing my half-finished stairs today!  This was an unplanned project, but one I’m so happy we’re doing for reasons of practicality and aesthetics.

Wall-t0-wall carpet is generally not my thing.  I’m okay with it in certain rooms but I draw the line at kitchens, bathrooms, and stairs.  Well, most stairs.  Our stairs going down to the basement are carpeted and that’s fine.  But 13-year-old beige carpet on a beautiful split staircase that is the focal point when you walk in the front door?  Carpet that took 30 minutes to vacuum, but it still looked grubby?  Carpet that was chewed on by the previous owner’s cat?

It’s over the line for me. 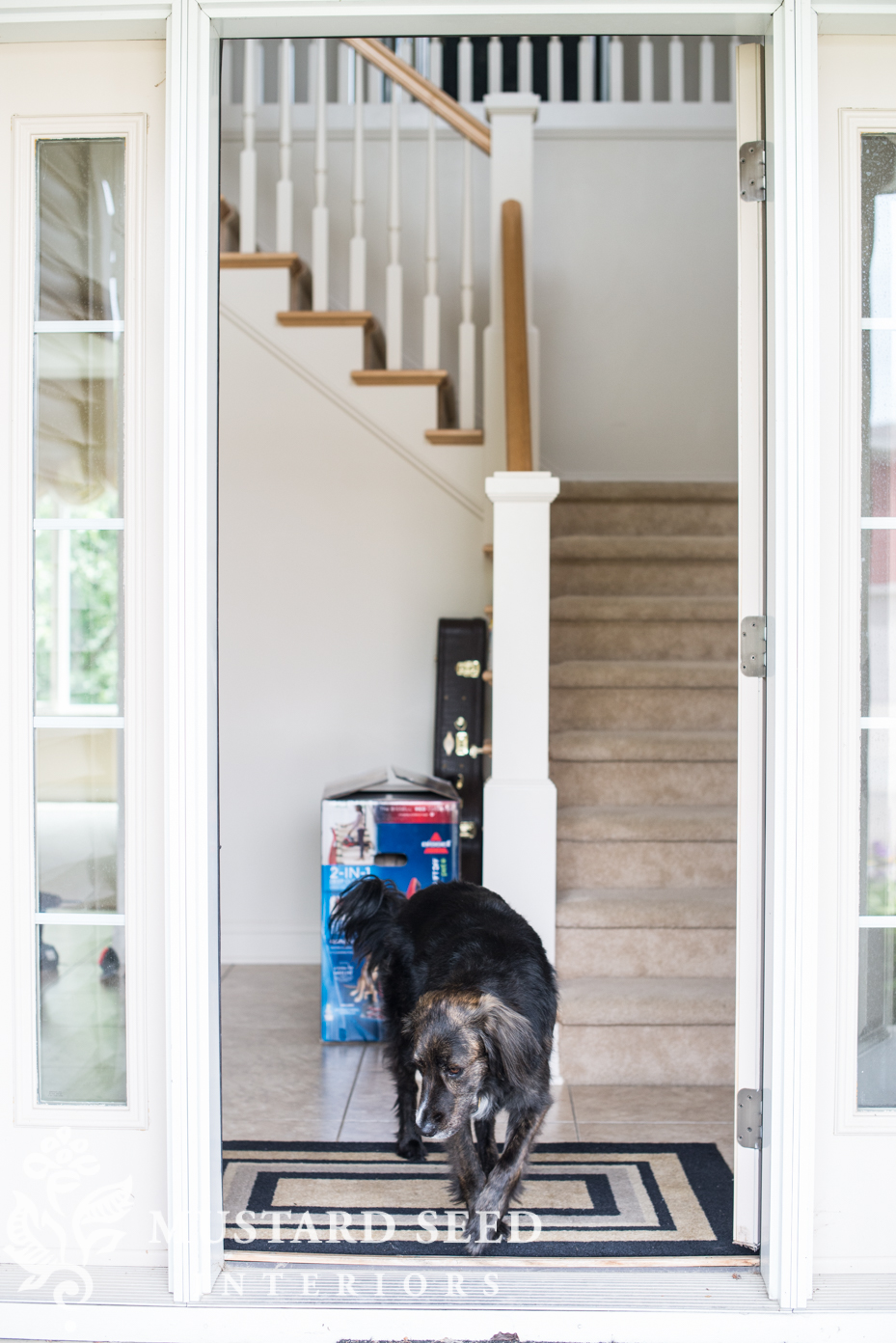 I knew I would want to rip it up eventually, but I wasn’t sure what we would do after the carpet was up.  Would we be lucky and find hardwood treads and stairs in good enough condition to stain or paint?

With that hope, I ripped up the carpet.

We were not lucky.  The steps were particle board.  Particle board will not look finished no matter how much I painted it.  Even a pretty woven carpet runner wouldn’t do the trick.  To make matters worse, the treads were glued down, so any efforts to rip up a tread resulted in an hour of making shredded wheat out of said tread. 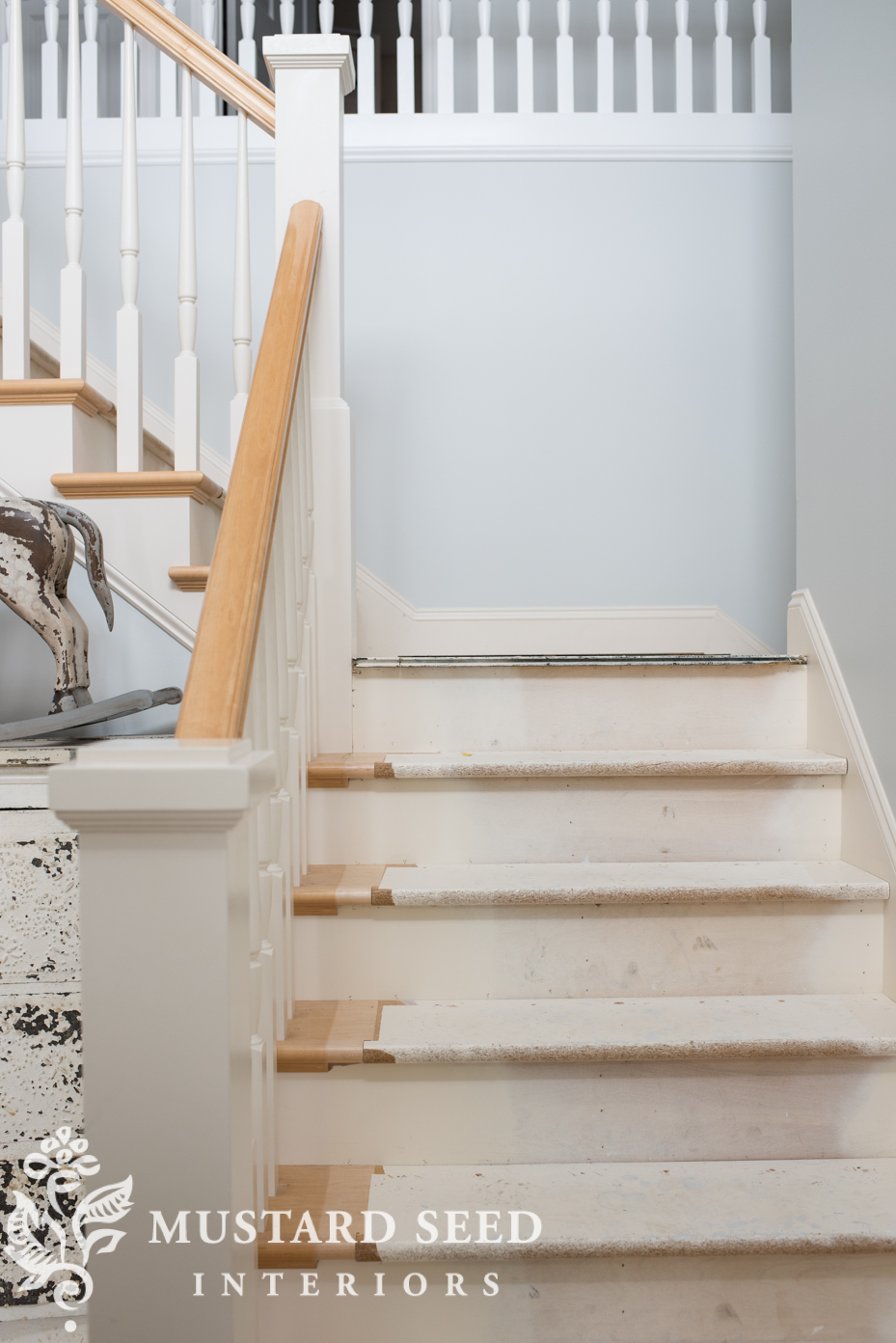 Basically, it was a mess and the fact that we had ripped up the carpet forced a decision.  After Jeff and I worked together to remove and replace just one step, it was clear that this was a project beyond our DIY abilities.  So, we could either have new carpet installed or have the steps done properly in hardwood.  Even though it the was the more expensive option, we opted for hardwood.  The fact that our staircase was a little fancy (with returns and molding and a curved bottom step) added to the cost.  And, they basically had to rebuild the staircase, which involved removing the banister on the foyer side.

It was a big project, but it looks amazing and we think it was worth the investment.  This is one of those “forever” decorating decisions.  These stairs won’t ever have to be recarpeted or repainted.  They won’t ever go out of style.  They are done. 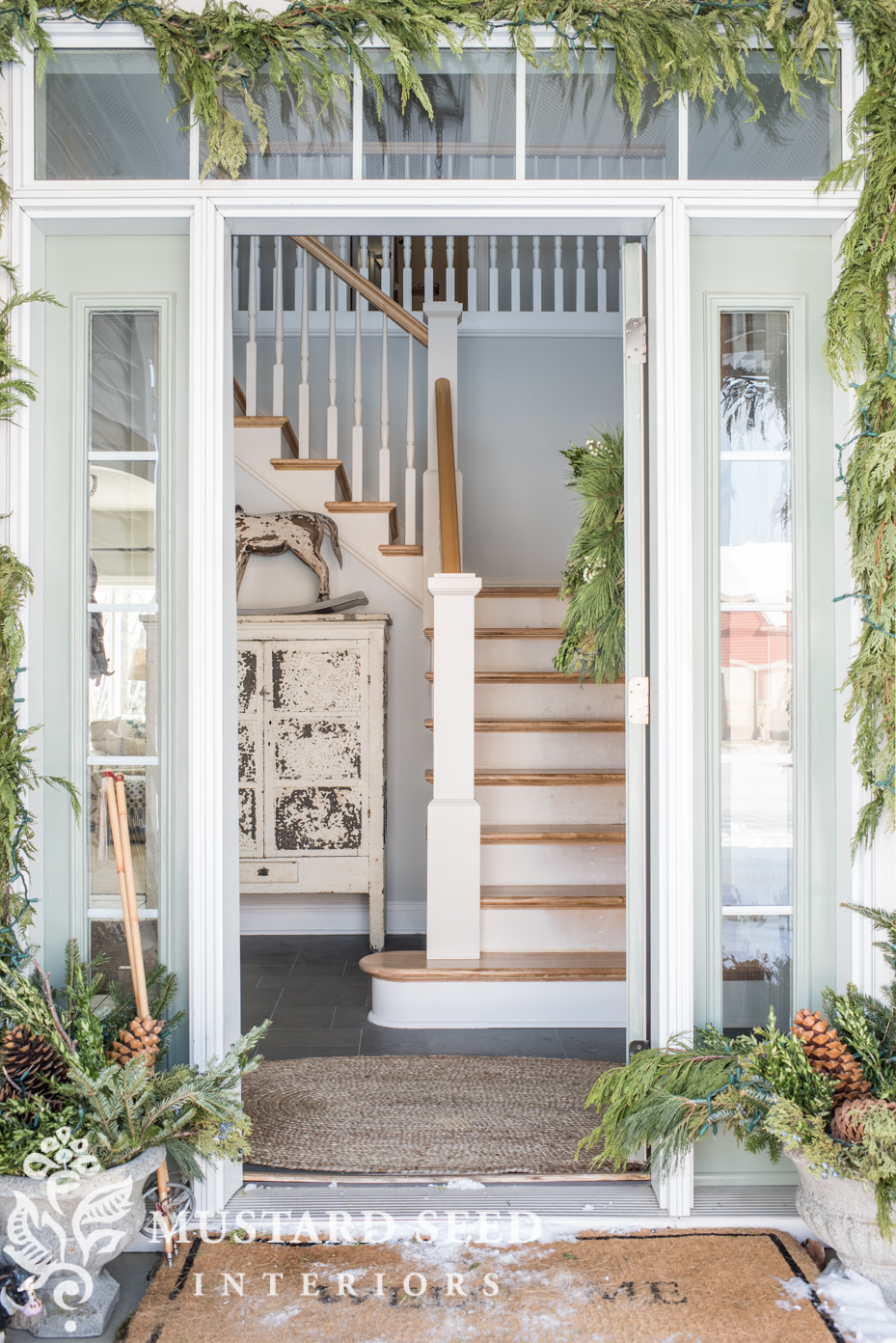 (The risers, baseboards, spindles, and newel posts still need to be painted, but the steps are done!) 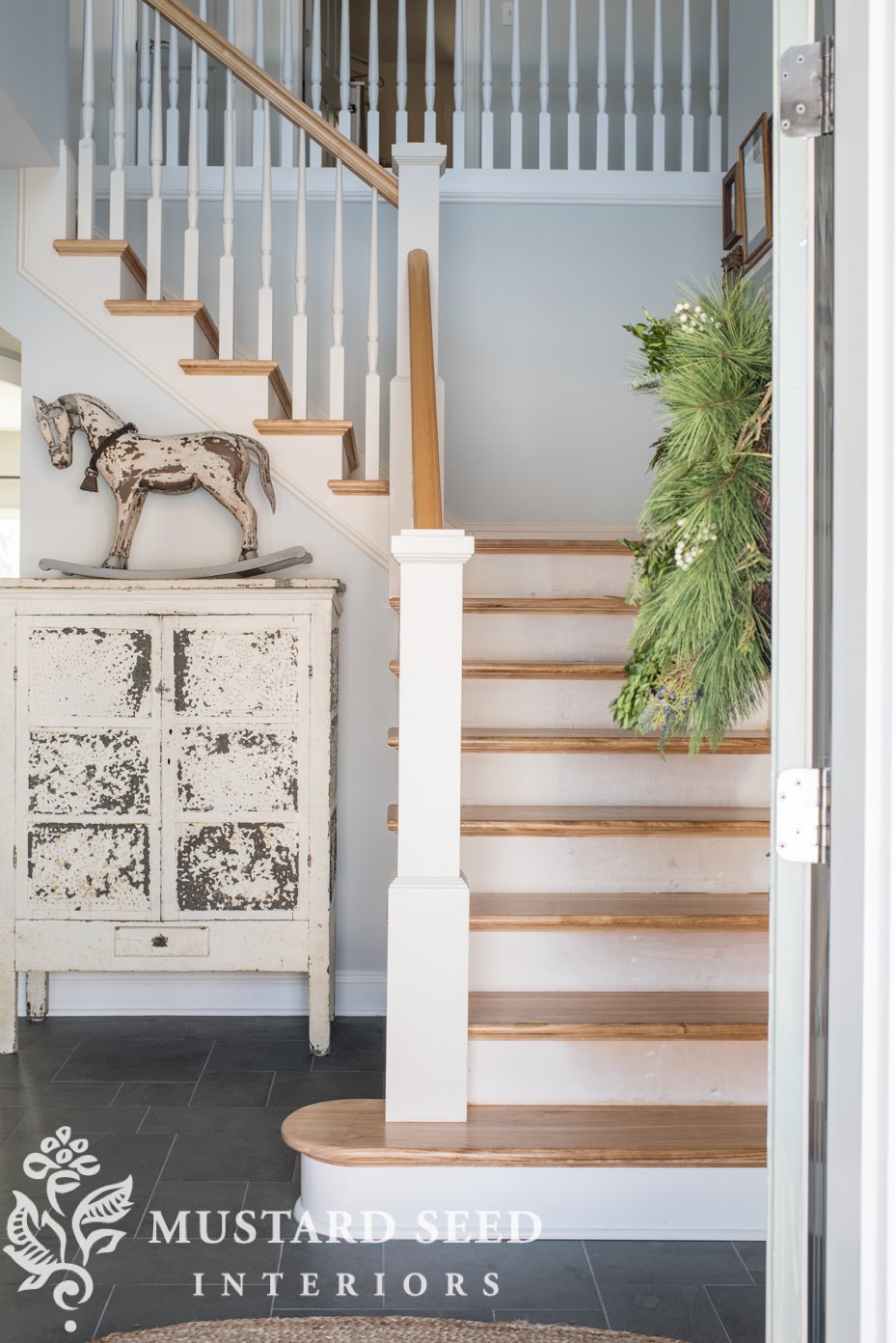 I can’t wait to see how the bright white will contrast the wood treads and make everything look crisp and finished. 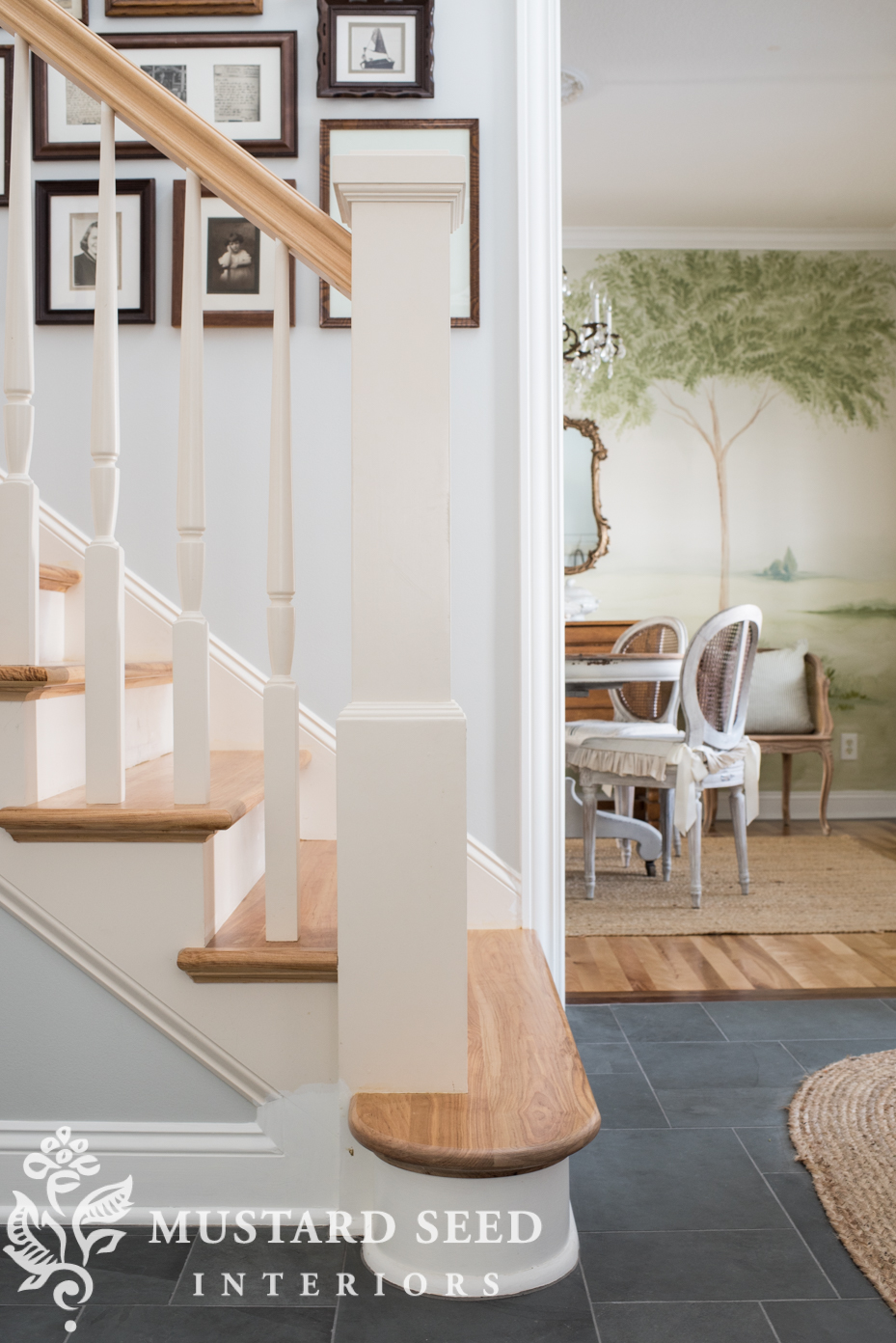 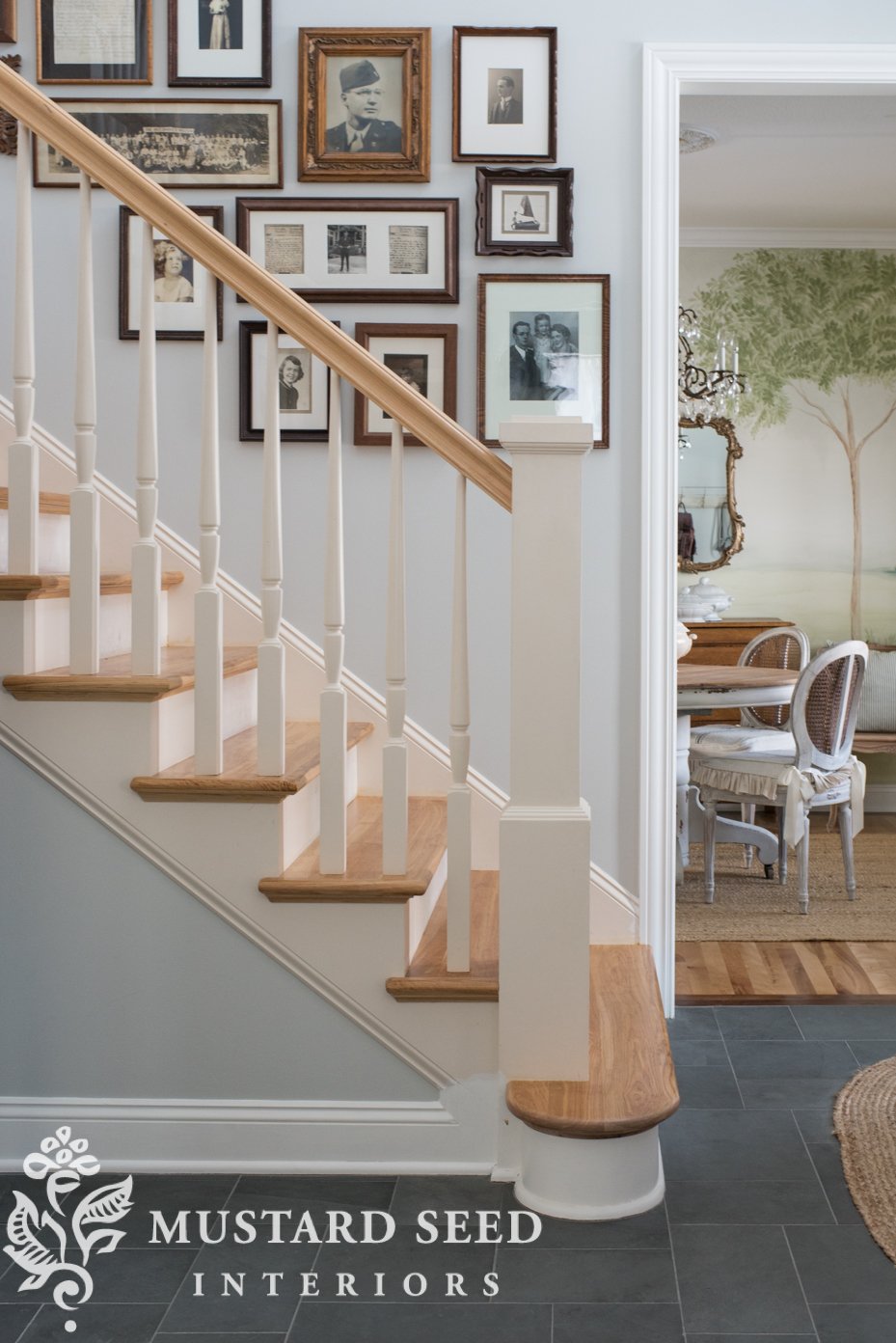 Here is how the back steps looked before… 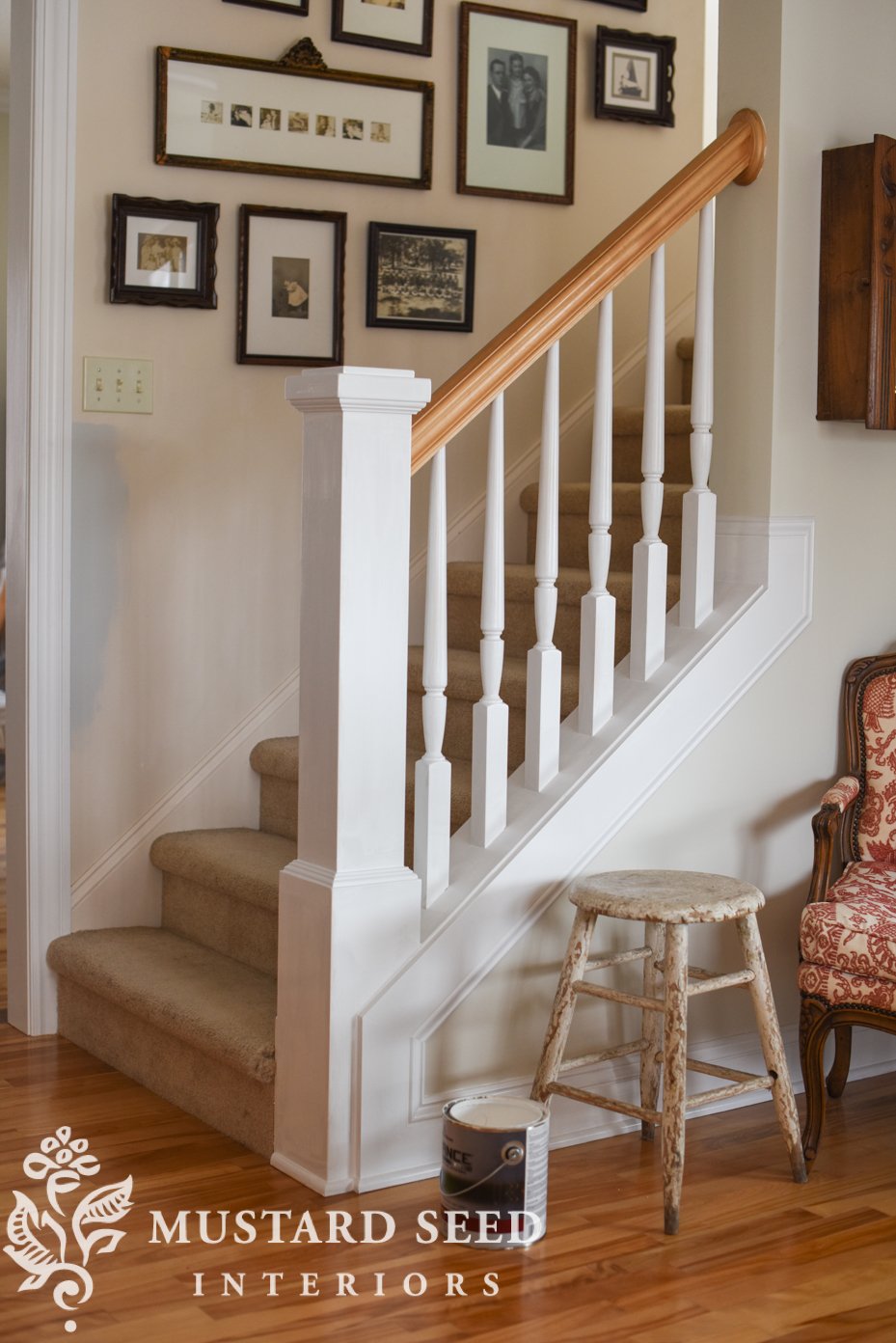 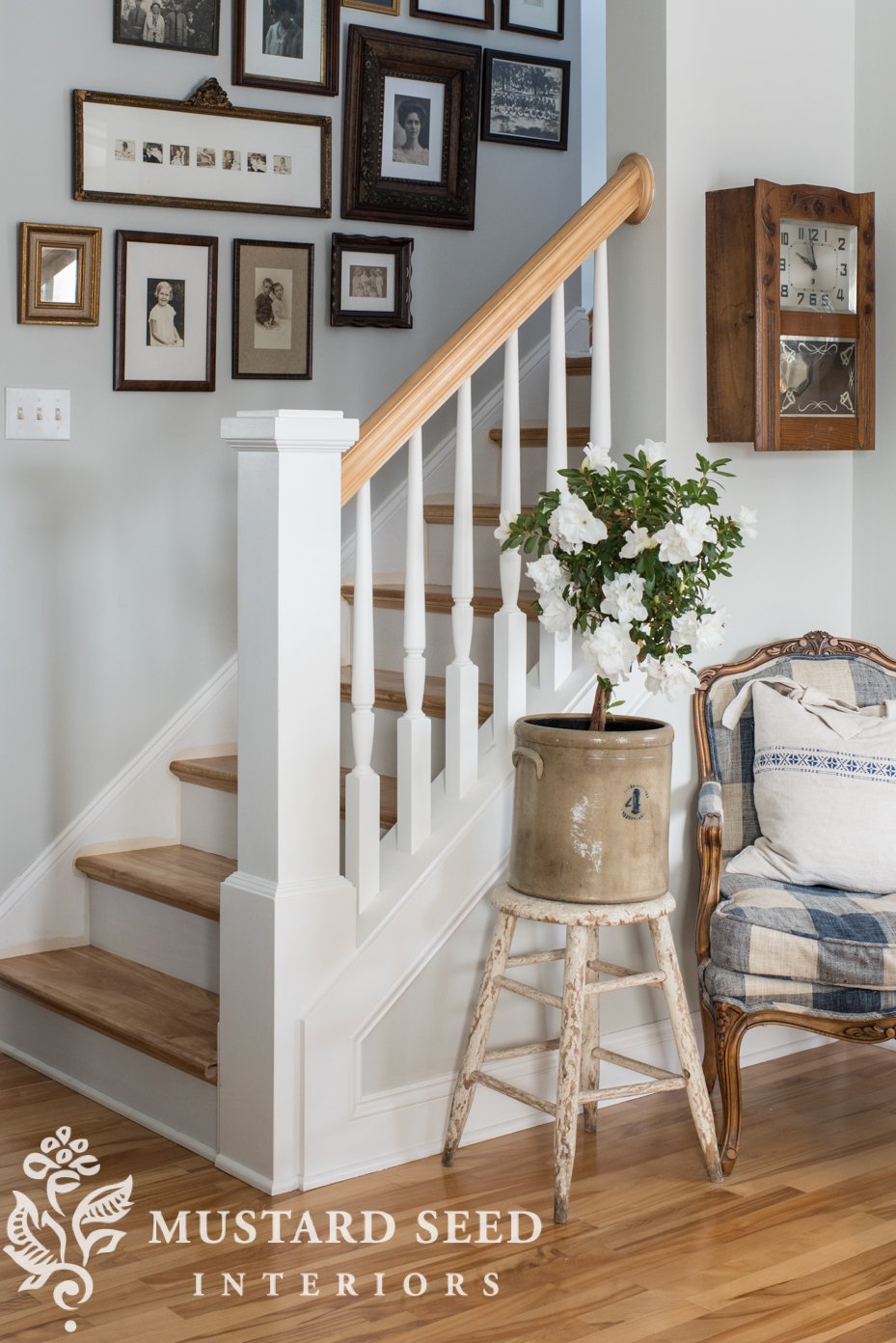 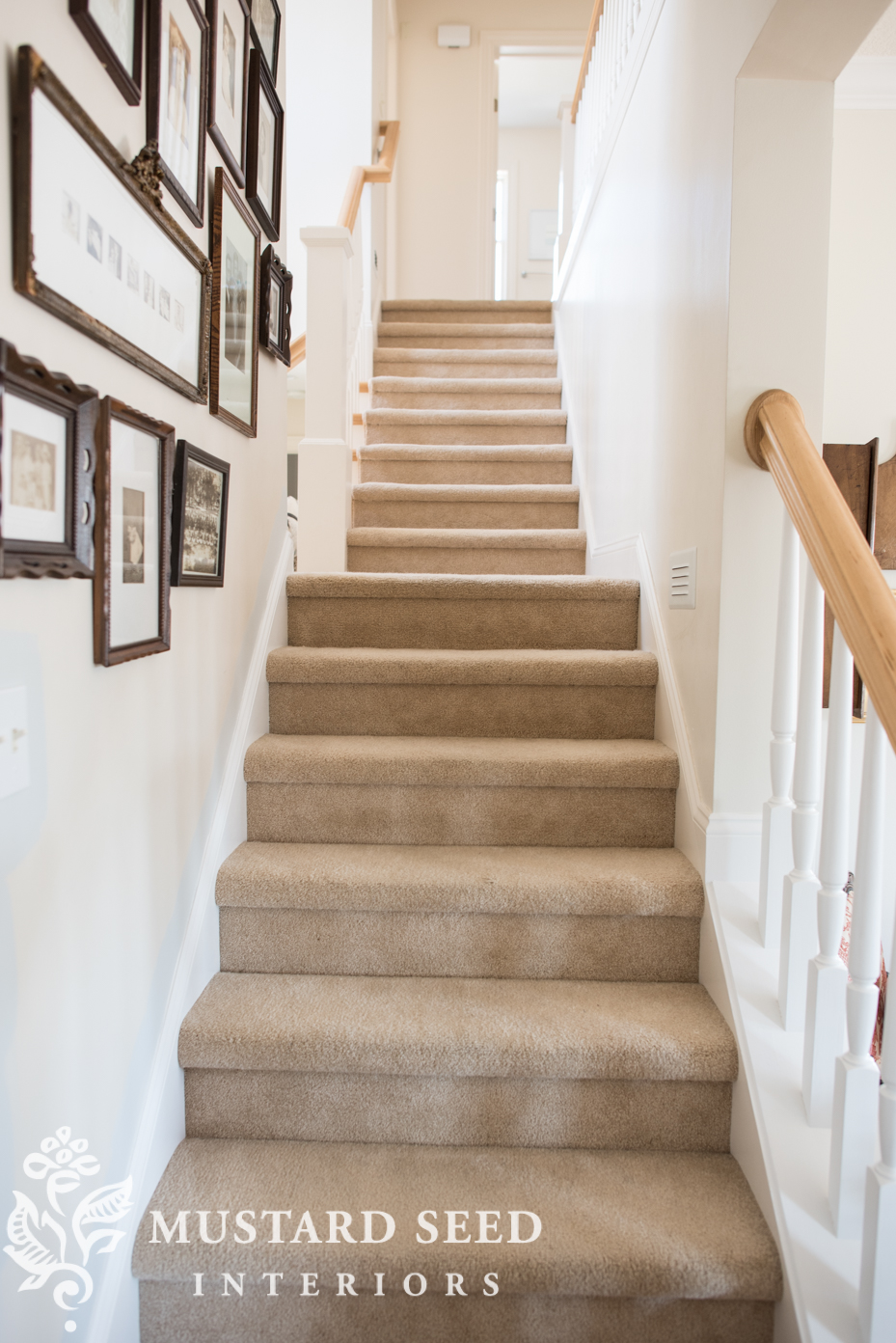 I thought they might be slippery or loud, but they really aren’t.  And they are sooooooo much easier to clean.  The neatnik in me is happier knowing that dirt and fluff aren’t hanging out where every tread meets every riser.  I also like that I can mop the steps if a certain dog and two pre-teen boys track mud up to the second floor or spill something.  (Marshall was already balancing mixed berry applesauce while carrying up his laundry basket and spilled it down the steps!) 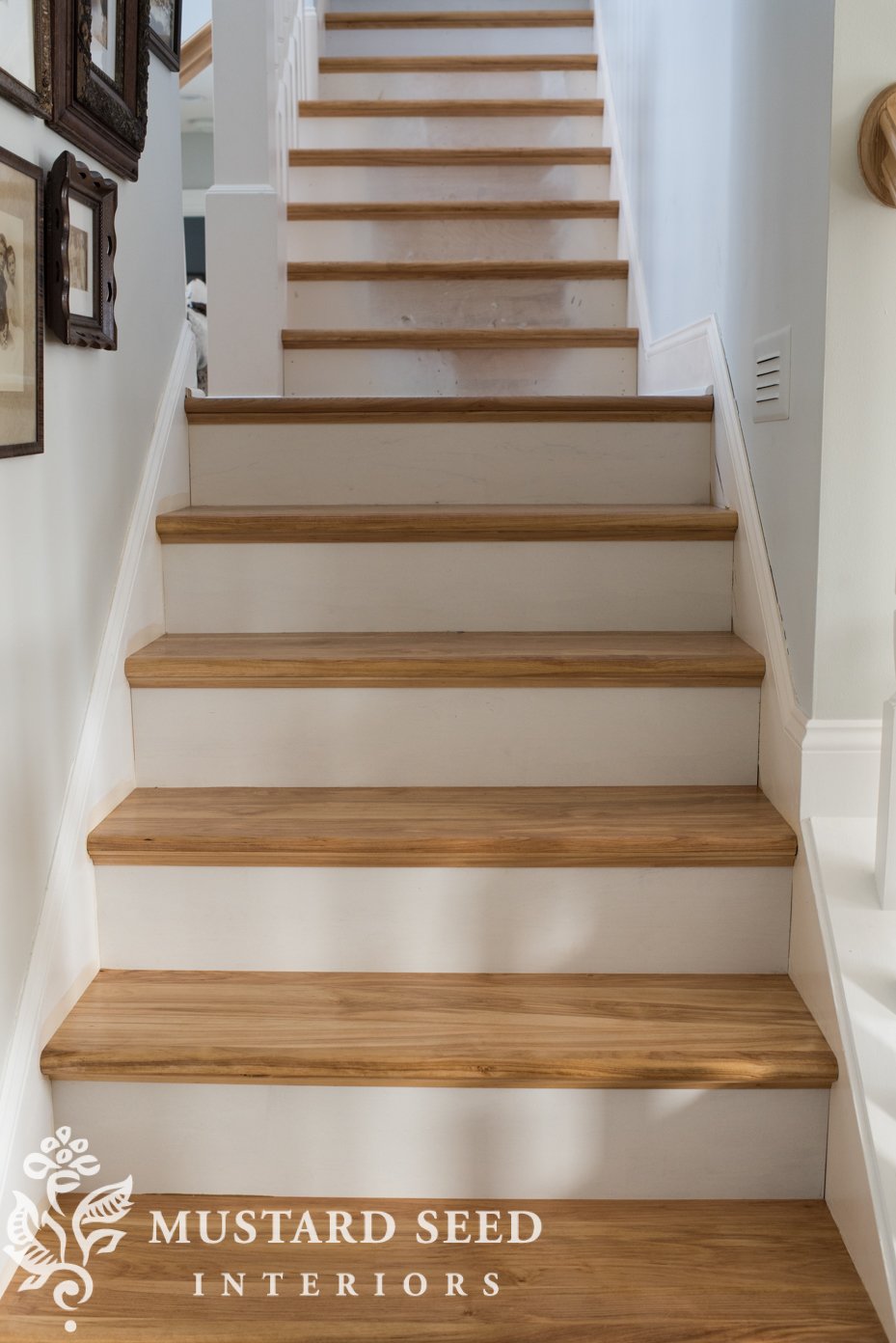 Even without the fresh coat of white paint on the risers and baseboards, I can see that these hardwood treads elevate the look of the staircase and every space it connects.  These stairs are now the architectural feature they should be, instead of just a method to get from one floor to the next. 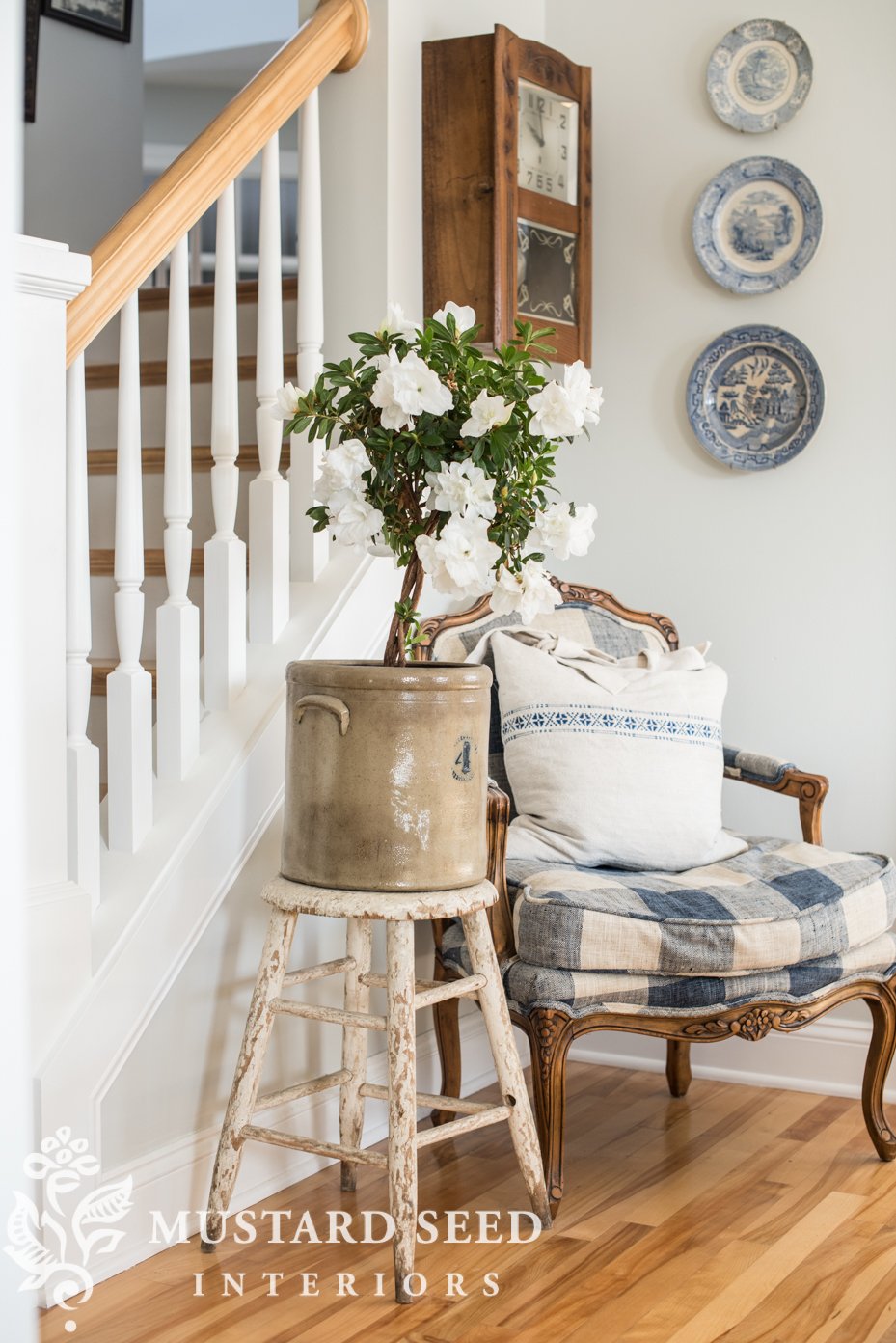 Of course, I’ll share more pictures when they are finished, finished…

Have you ever started a DIY project and realized you were in way over your head and had to hire it out?