This week I’ve been working on organizing our kitchen.  It’s one of the spaces that has been bugging me the most (organizationally speaking).  I hadn’t moved things around since we moved in and, after cooking in this kitchen for a year and a half, it has become clear that some things were put in the wrong place initially.

Everything looked neat and orderly from the outside, but there were a few messy cabinets behind those closed doors. 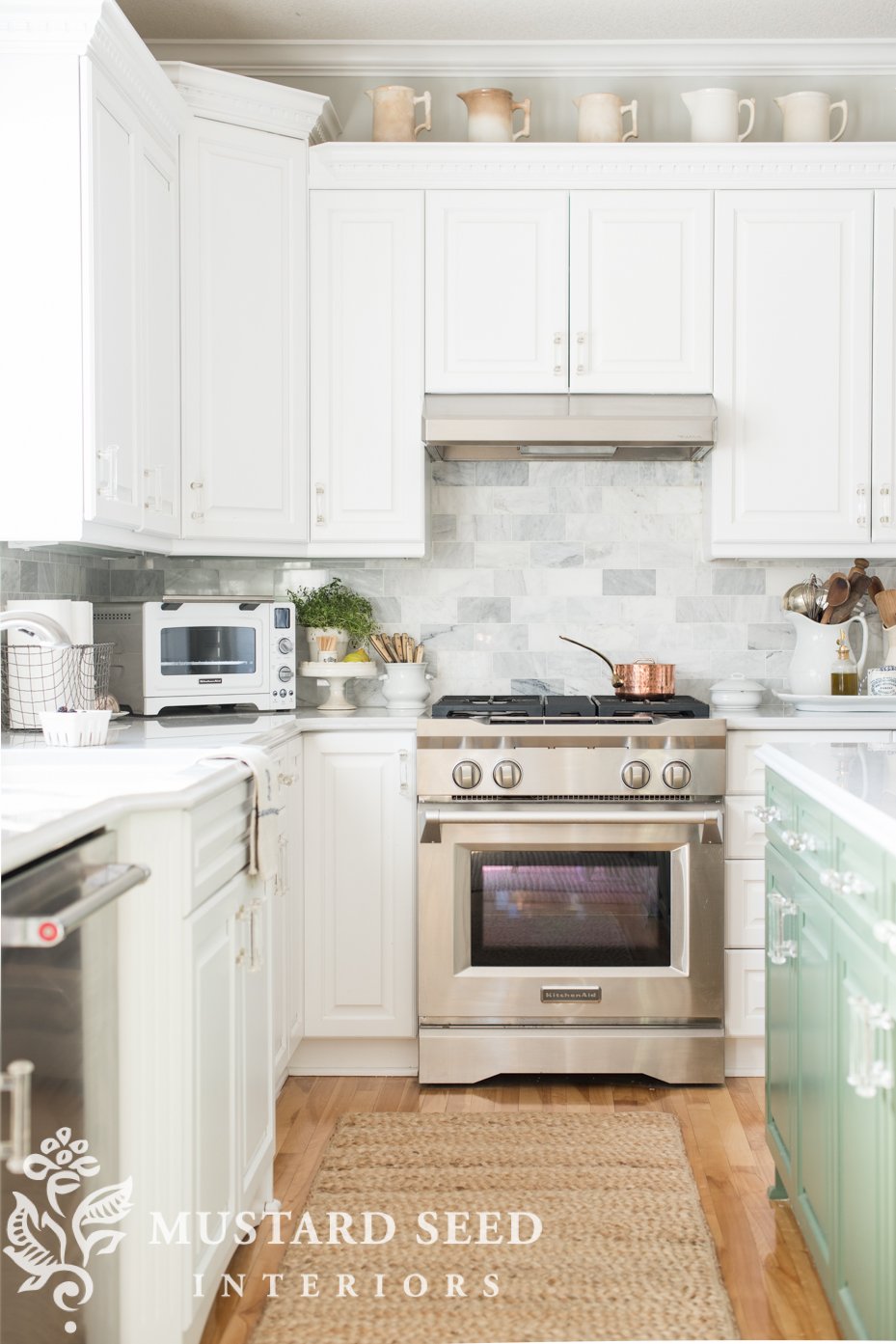 One of the biggest problem areas was the deep, skinny cabinet to the left of the fridge.  I decided to use it for my baking gear and ingredients.  It ended up being okay for the gear since baking dishes, rolling pins, etc. fit well in a deep, narrow space, but it was not working at all for the ingredients.  All of the little jars and boxes were buried, disorganized, and things were hard to find.  I often bought multiples of something simply because I couldn’t find it.

So, I moved the baking ingredients and used that cabinet strictly for things that fit well in the space. 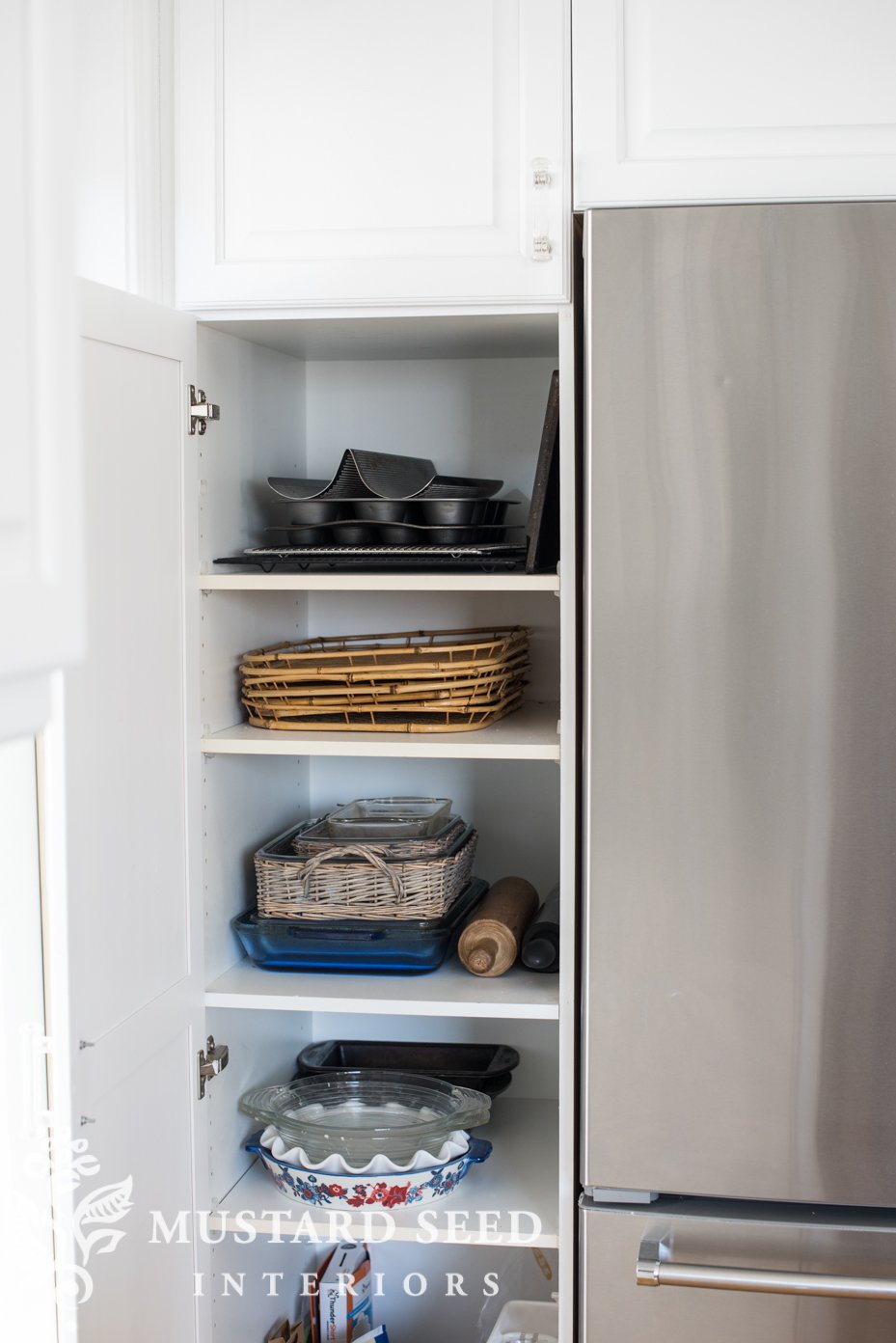 My recipe binder and some cookbooks were above the stove where they were hard to reach and would often slide out at me.  I moved them to the upper cabinet along with some baking dishes I seldom use but didn’t want to get rid of.  (The antique juicer belonged to my great grandmother.) 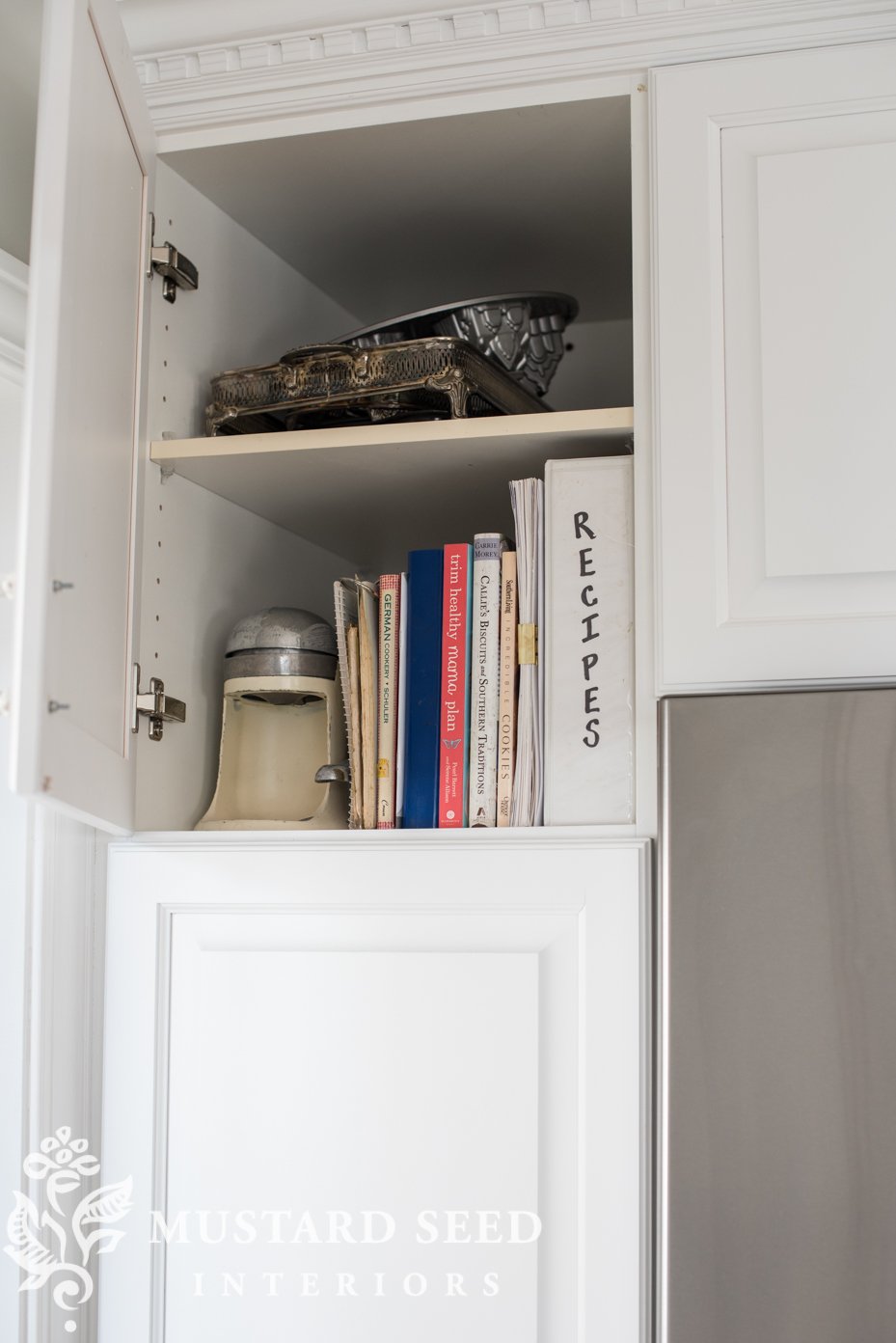 I need to update my recipe binder!  I put that together when I was a newlywed, so it’s almost 20 years old!  Do you like my block font?  I was laughing at it when I edited this picture.

My favorite cookbooks are on the open shelves between the laundry room and butler’s pantry. 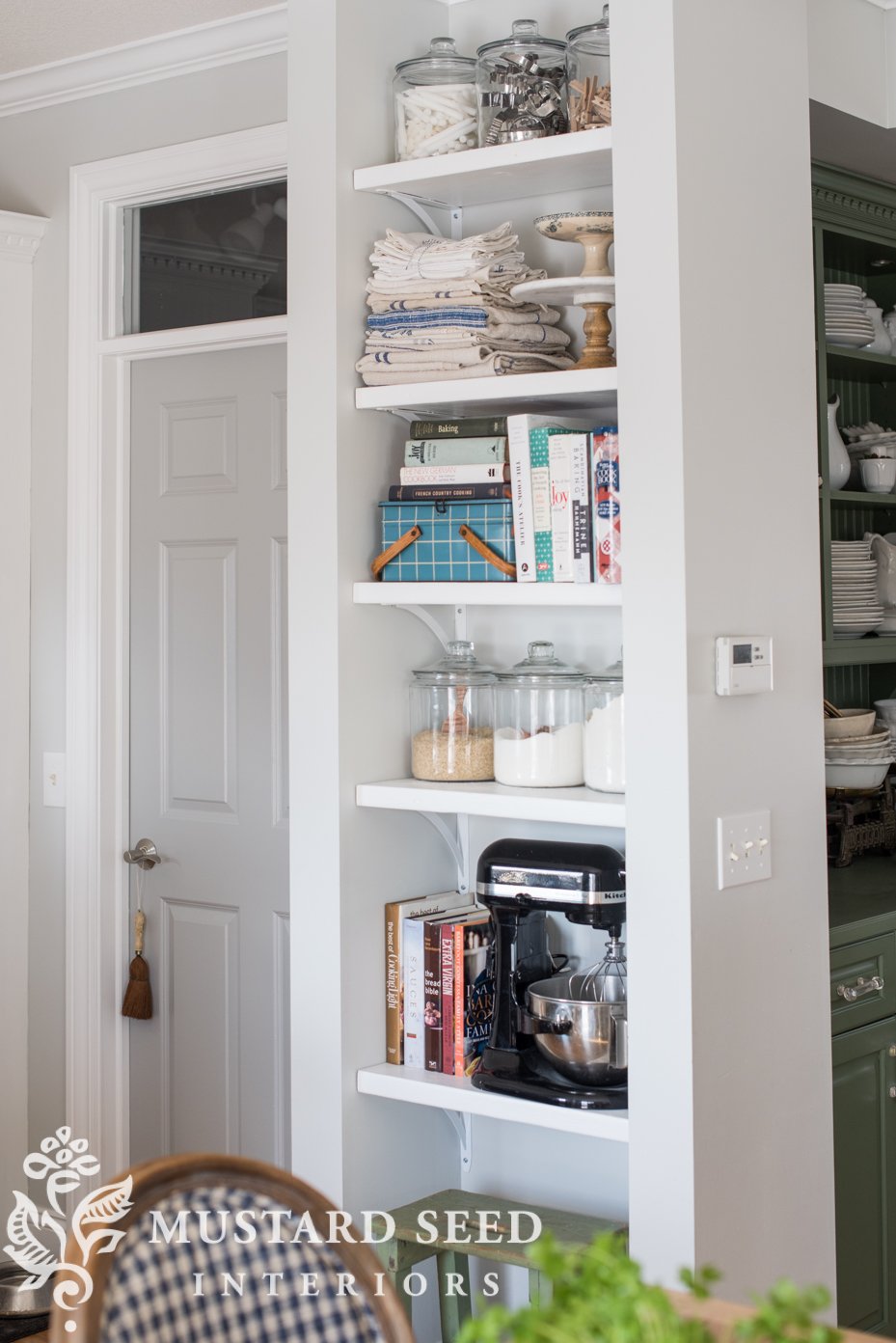 Now I had free space above the stove I filled it with round cake/tart pans, some pots that don’t fit on my pot rack and lids.  The lids were in a jumble in a drawer by the stove, so this was a great solution.  They are organized better and the drawers will be easier to keep tidy. 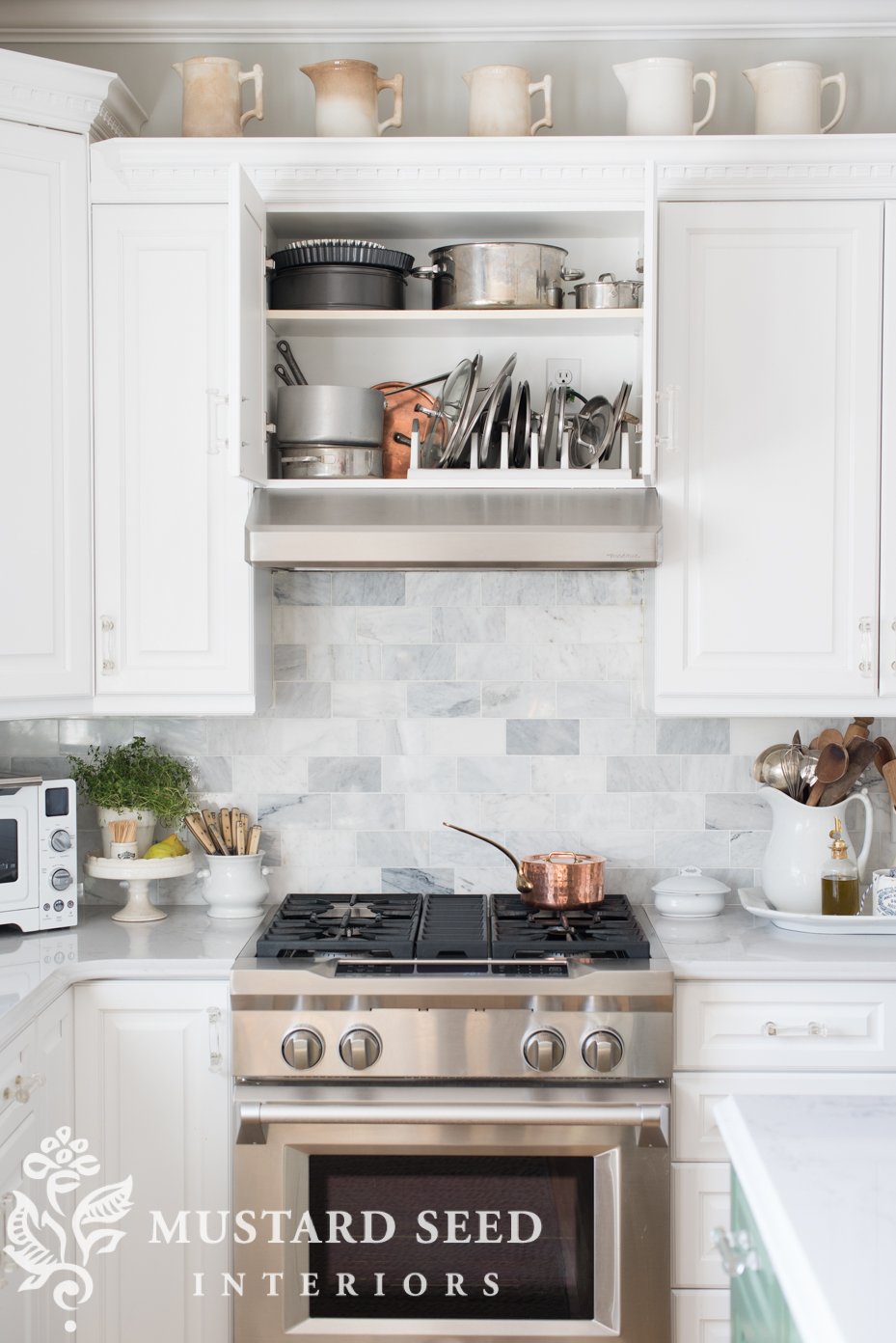 I moved the baking ingredients to the lazy Susan in the corner cabinet to the left of the stove.  It was filled with just a few bottles of olive oil and wine I use for cooking, but otherwise, it was empty.  All of the ingredients fit easily and now I won’t lose any in the back of a cabinet. 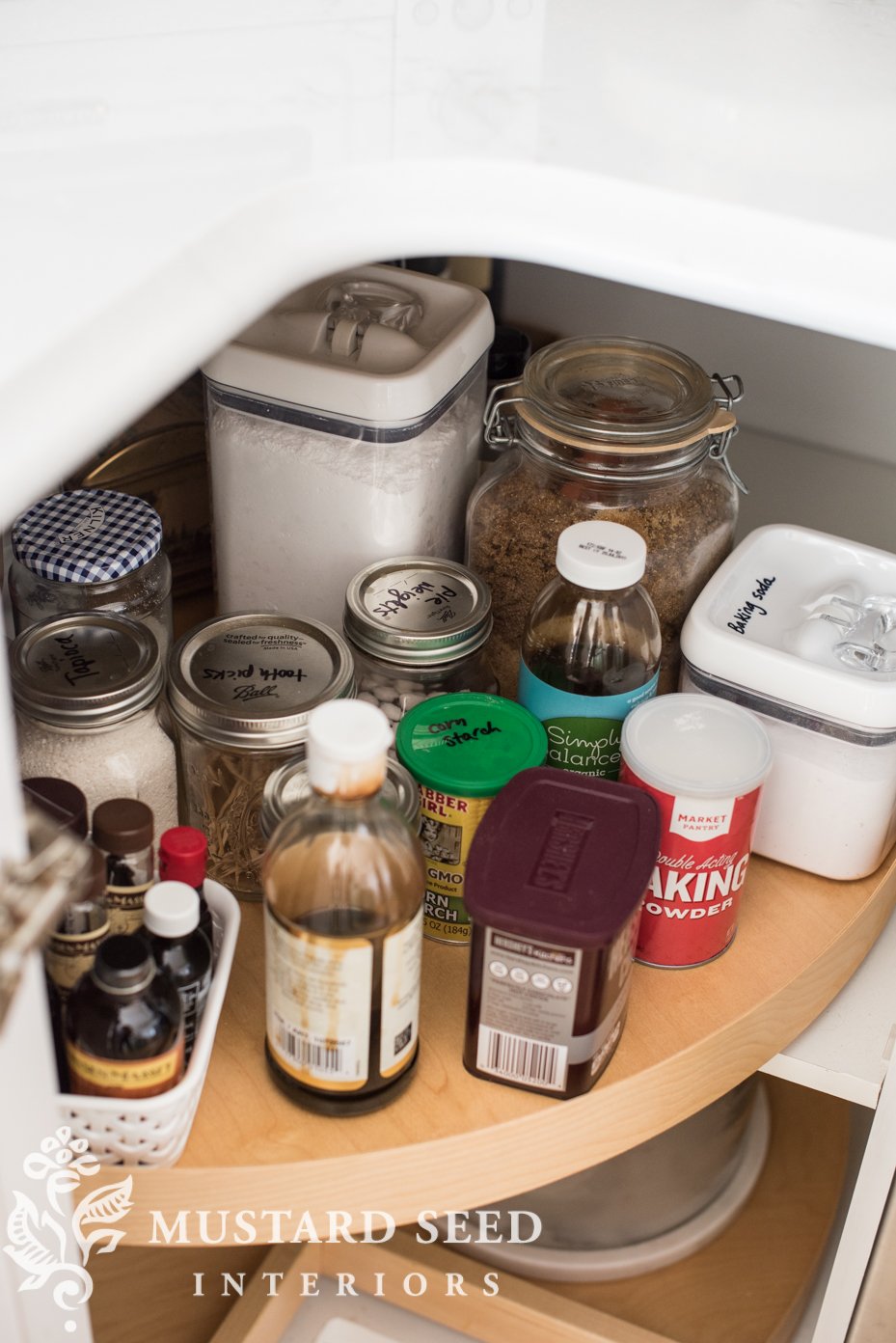 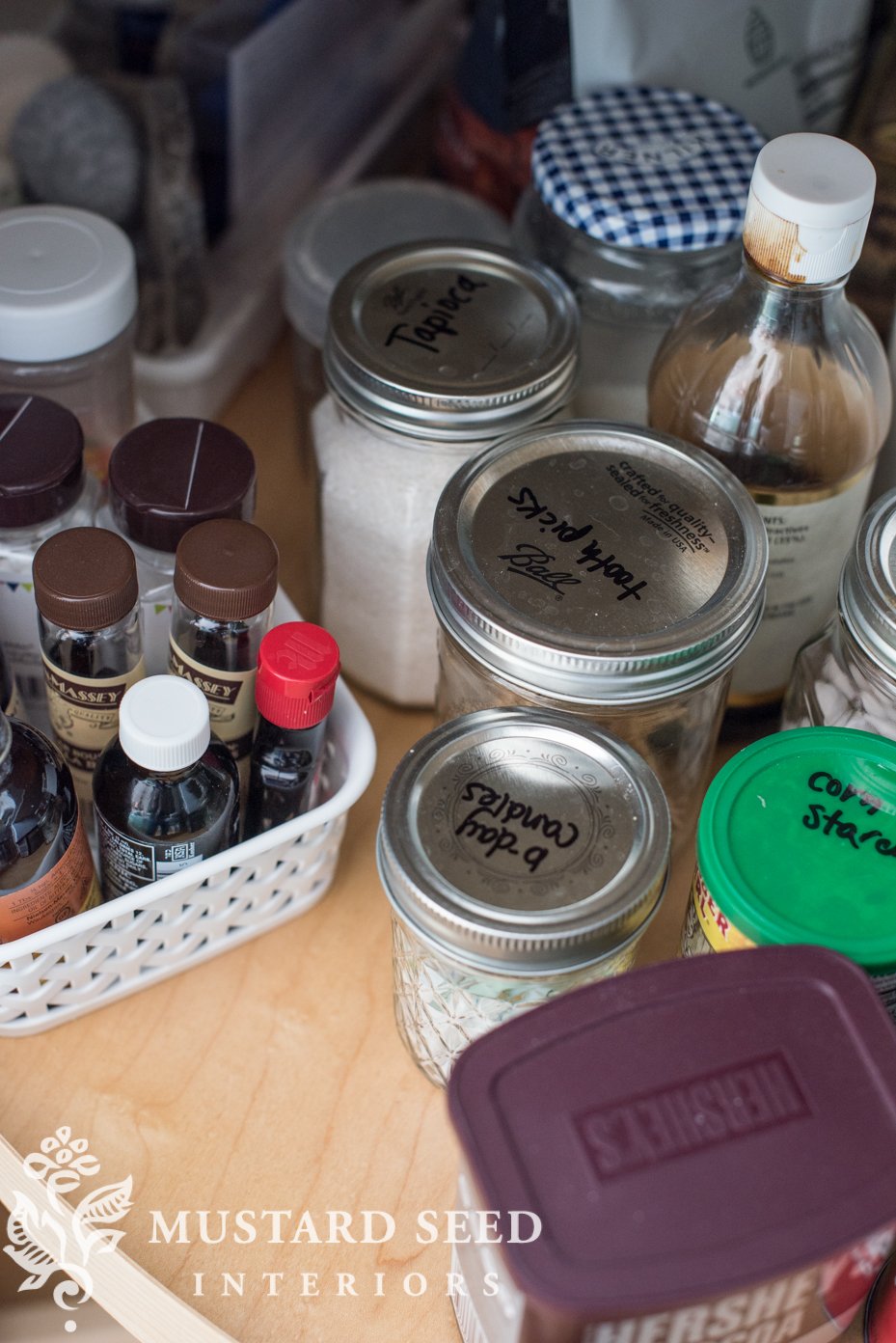 Back in that cabinet was hidden a lifetime supply of Almond Extract!  I guess I kept buying bottles because I couldn’t find it. 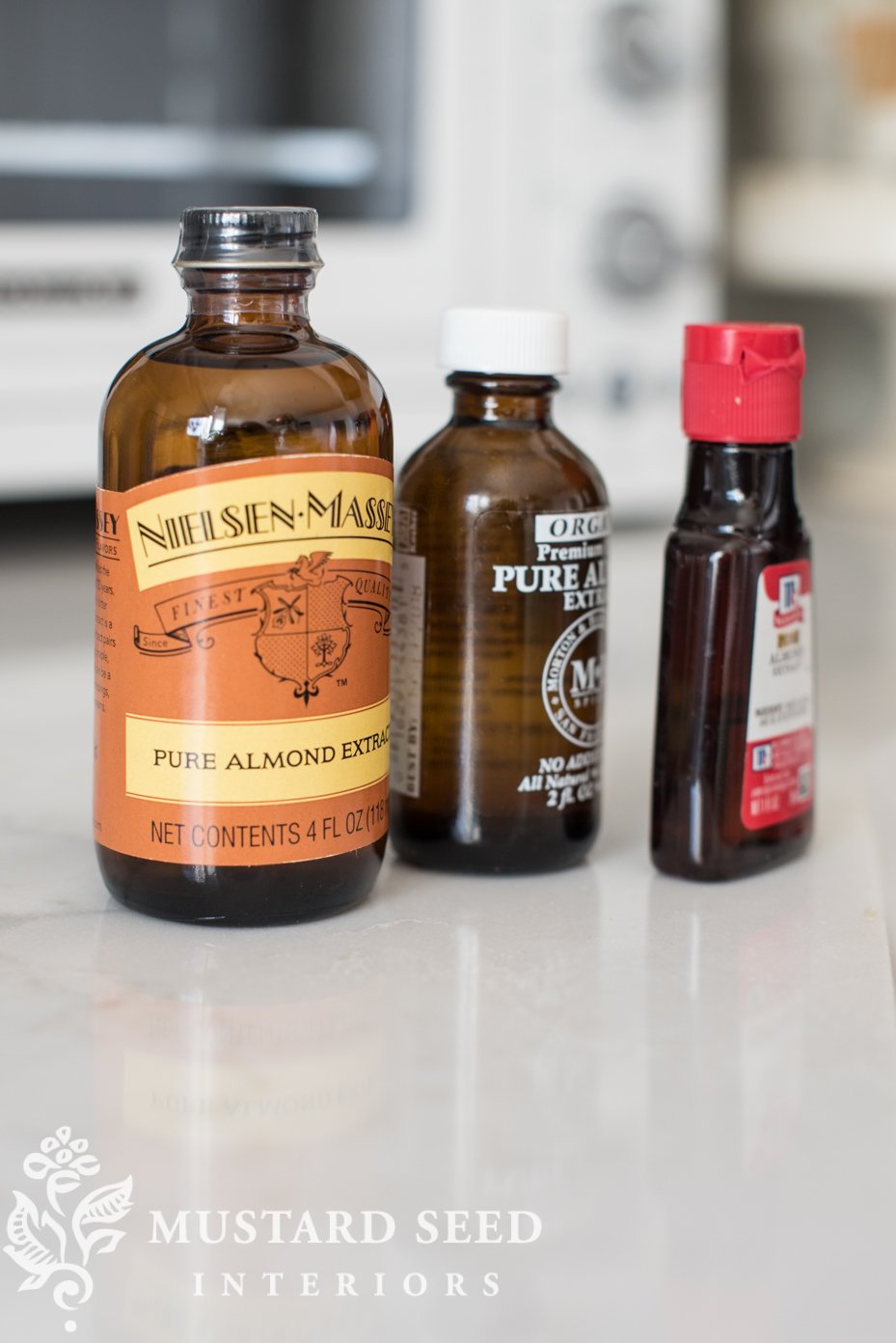 I also found seven jars of honey while cleaning out the cabinets.  They were spread out in three different places in the kitchen, so we couldn’t see the honey hoard.   I showed Jeff how much we had and he laughed.  Apparently, he’s been buying a new jar when he can’t open an old one!  Don’t worry, I introduced him to running the lid under hot water.

Thankfully, the honey will never go bad, so all of those bees who gave their life’s work to fill those jars will not have done so in vain.

Another problem area was the skinny cabinet by the stove.  I was trying to keep too much stuffed up in there, so I cleaned out my spices and moved them all to a drawer just to the left of the stove.  I just kept the things I use regularly for cooking here and now I don’t have to dig for what I need. 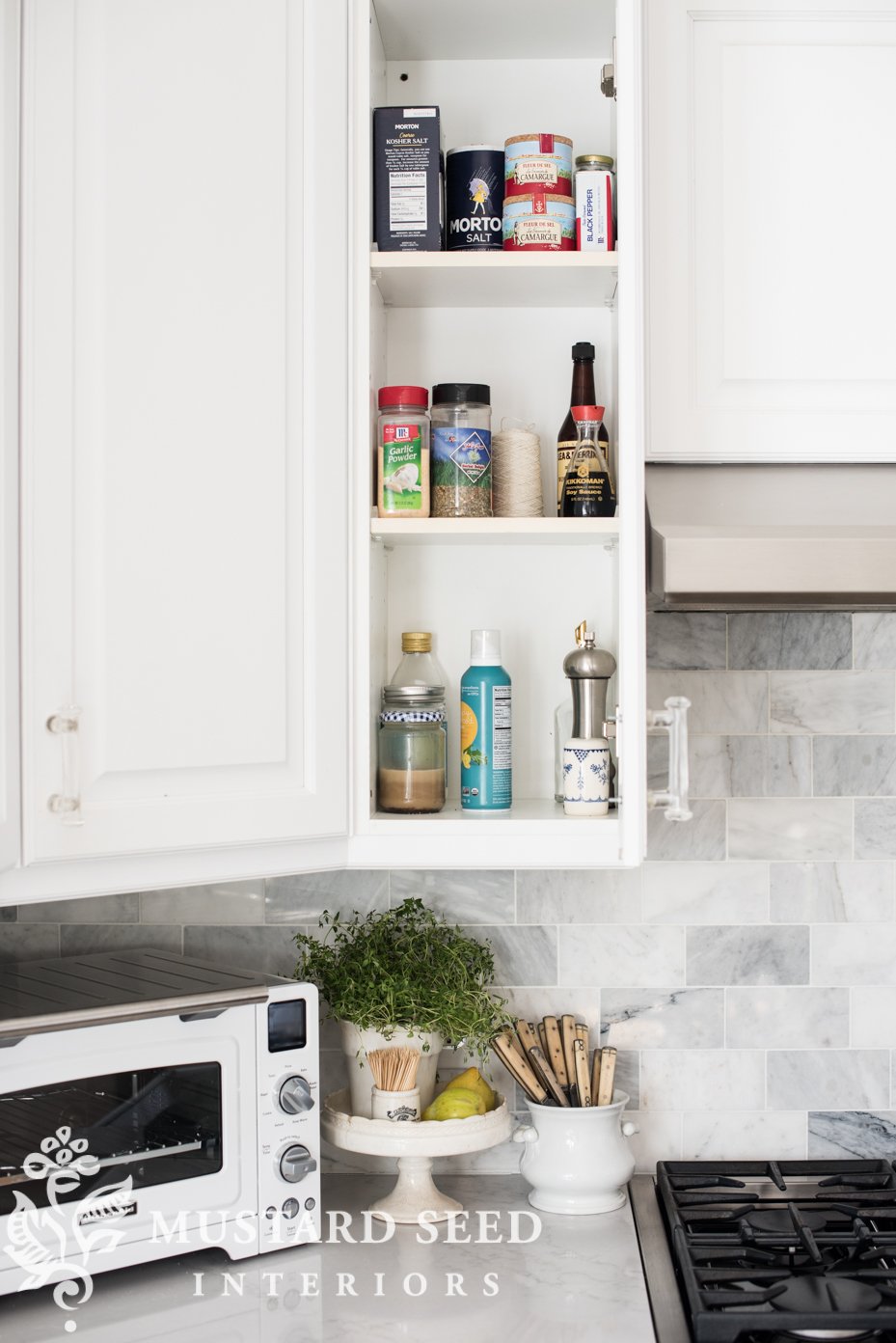 One of my favorite storage spots is the “dresser” to the right of the stove.  Deep drawers in the kitchen are brilliant and, if ever I design a kitchen from scratch, it will include lots of drawers!

I keep all of my cooking utensils and measuring cups/spoons in the shallowest drawer.  Some bamboo organizers from Ikea happened to fit perfectly to create some division. 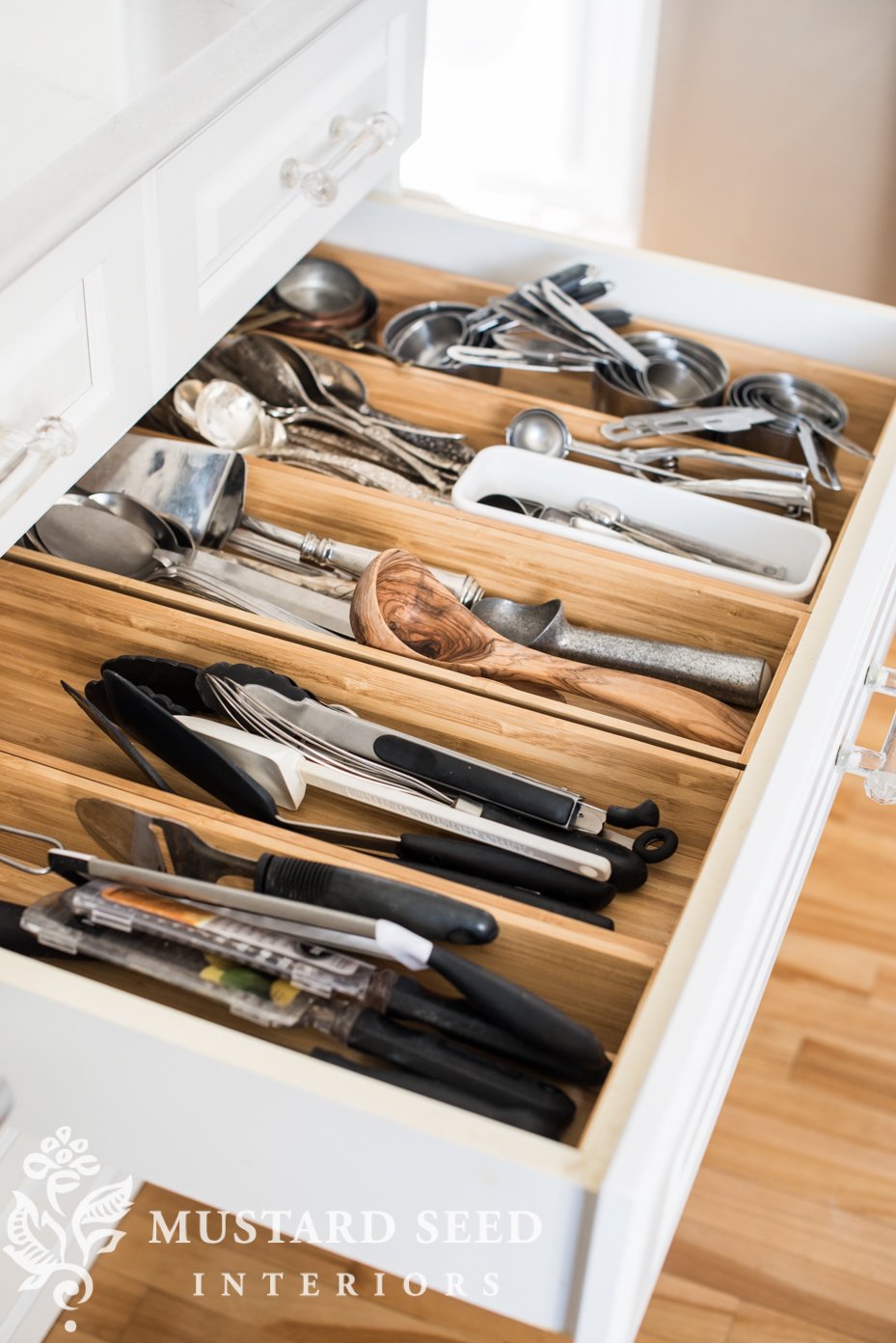 I used a small plastic organizer to further divide the small measuring spoons.  (And I know I have a lot!  I went through a big-time cooking/baking phase pre-kids, pre-business and I had a thing for kitchen gear.  I could probably thin them out, but it’s nice when I’m making a few different recipes simultaneously and can just get a clean cup or spoon.) 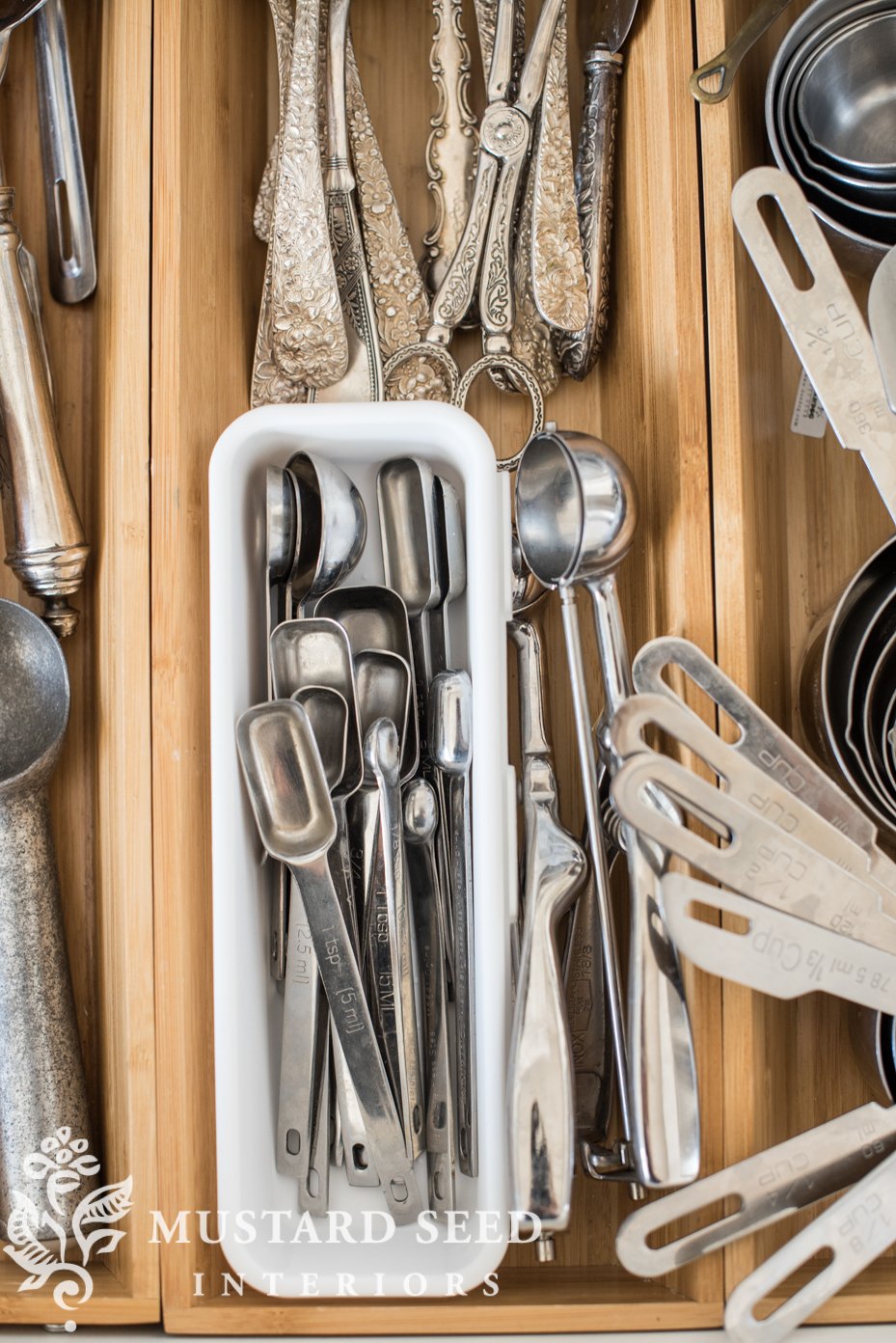 And, with the lids up over the range hood, the drawers aren’t overloaded and messy. 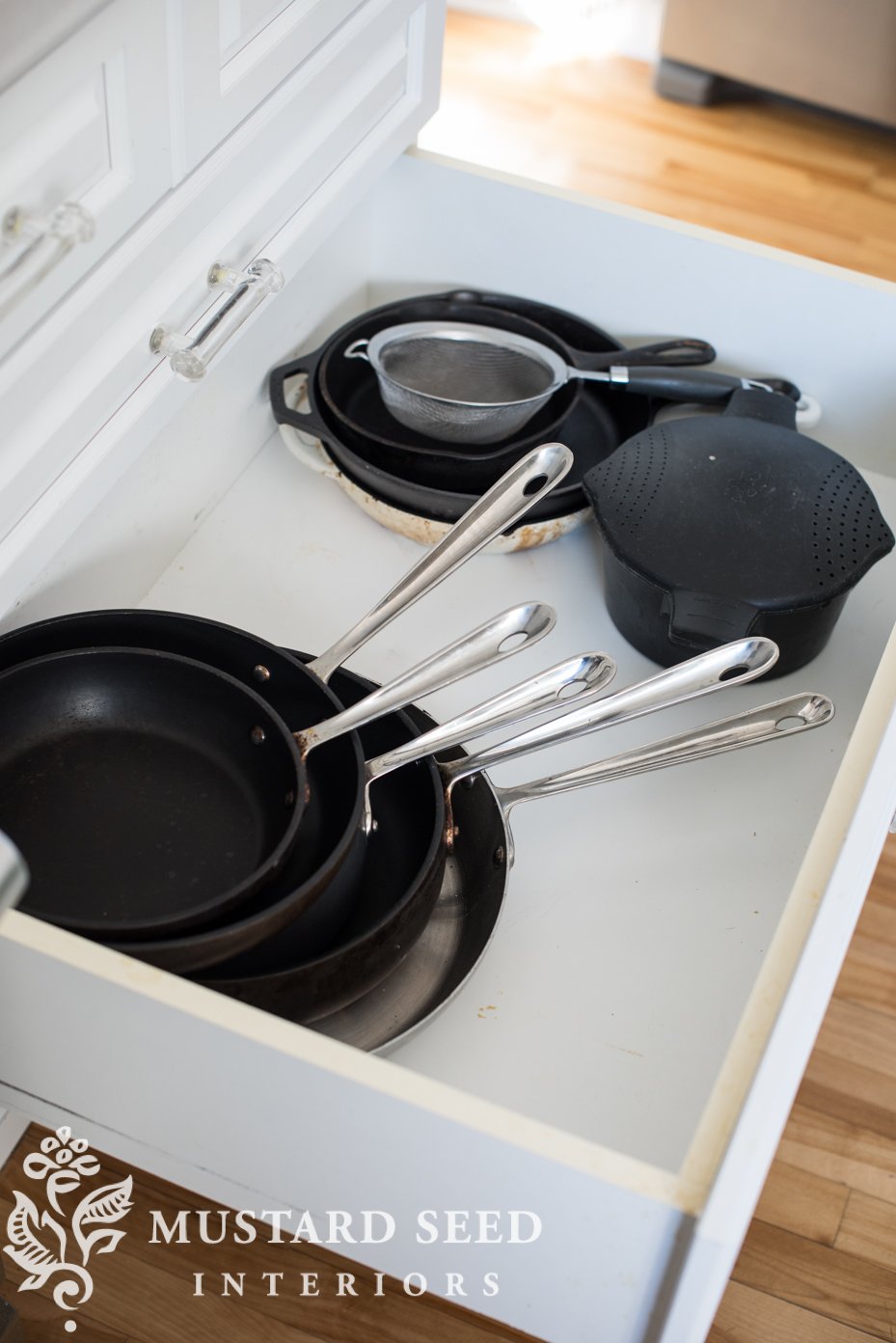 I do have a few of the largest lids in the bottom drawer with the baking sheets since they were too large to fit in the upper cabinet.  These are relatively contained, though. 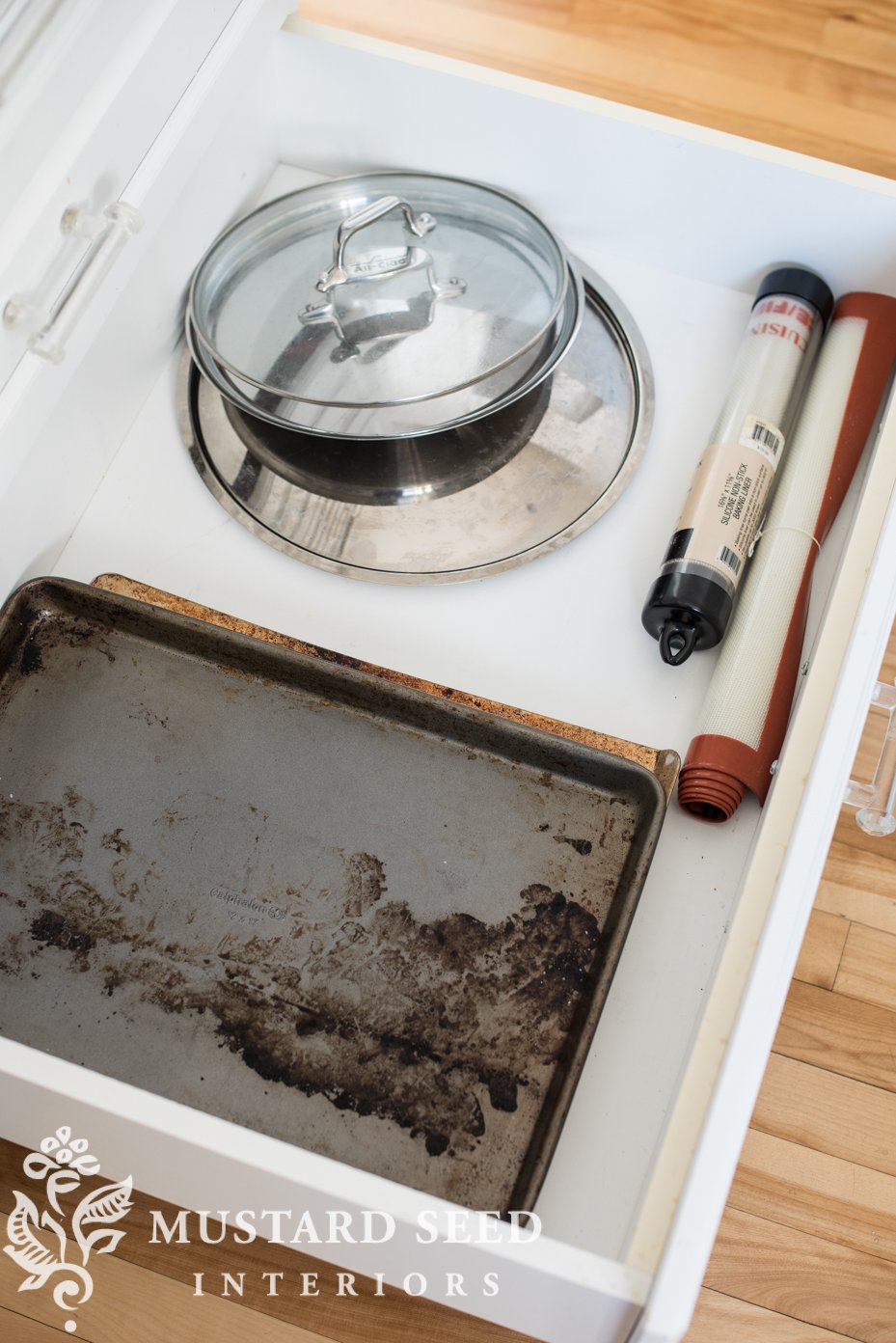 Just ignore the state of my cookie sheets!  I always use foil or parchment paper, so I’m not too concerned about how they look!

I won’t show you inside every cabinet, but those were the problem areas and how I addressed them.  With the rest of the cabinets, I straightened things out, moved some things around, and made sure the stuff I use most is easily accessible.  I did a pretty good job getting rid of things when I moved, so I am only bringing a few things to the thrift store.

We might eventually add sliding shelves to some of the bottom cabinets to make things even easier to reach, but it’s fine for now. 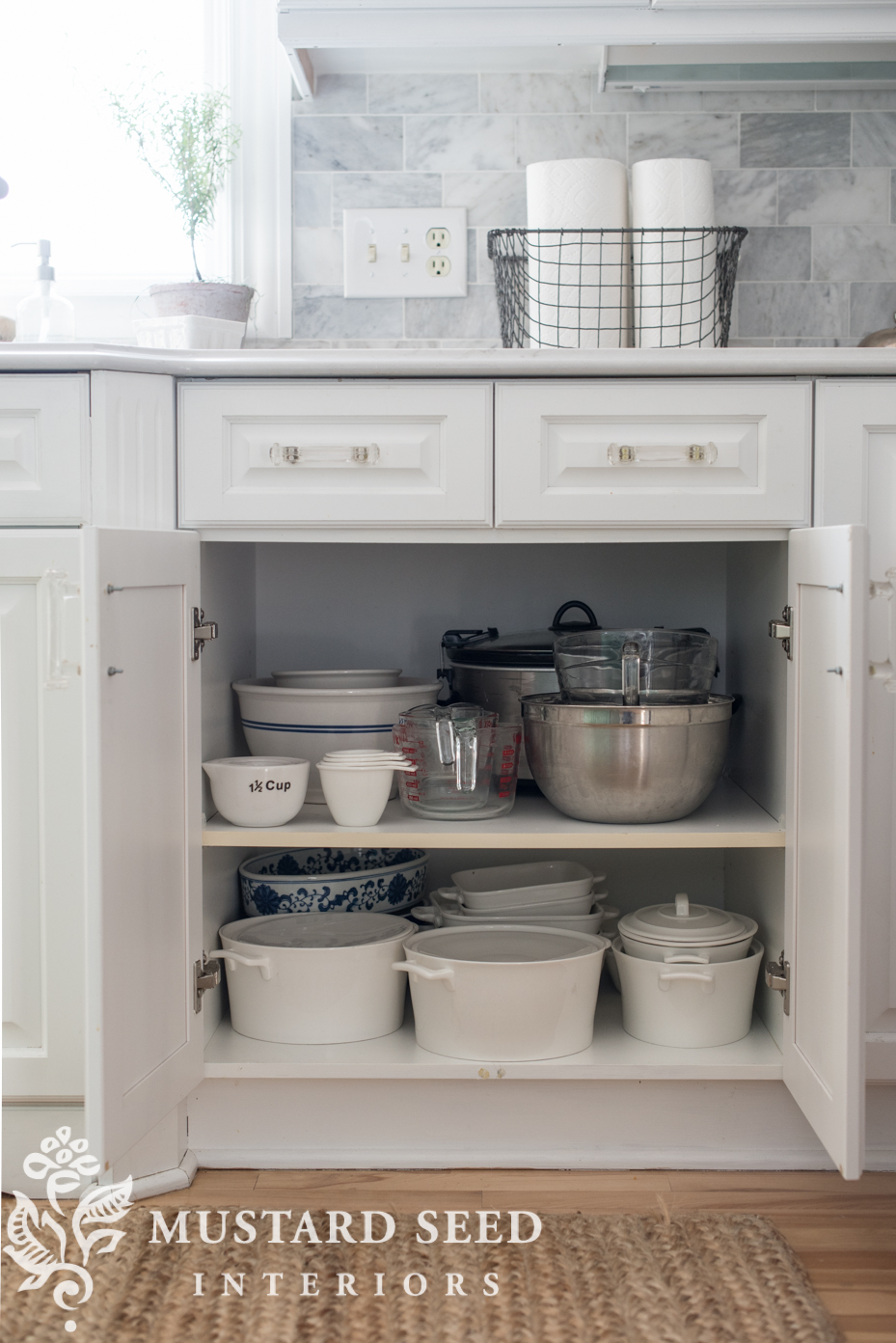 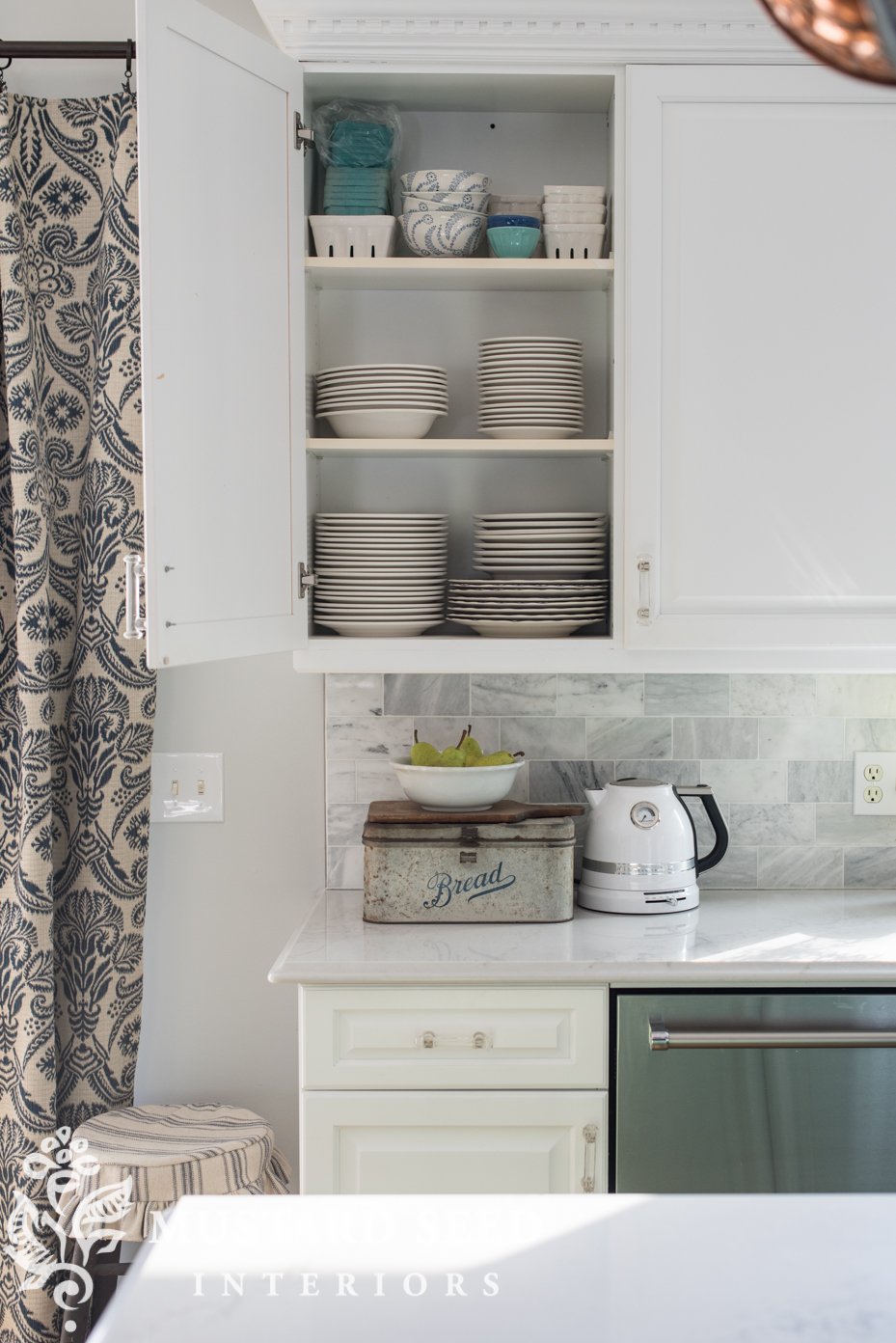 One thing that has gone on my to-do list, though, is painting the inside of the trim on the bottom of the cabinets.  I didn’t do that when I painted the cabinets and I can often see that unpainted wood in my pictures.  It won’t take long and it’ll be a nice finishing detail. 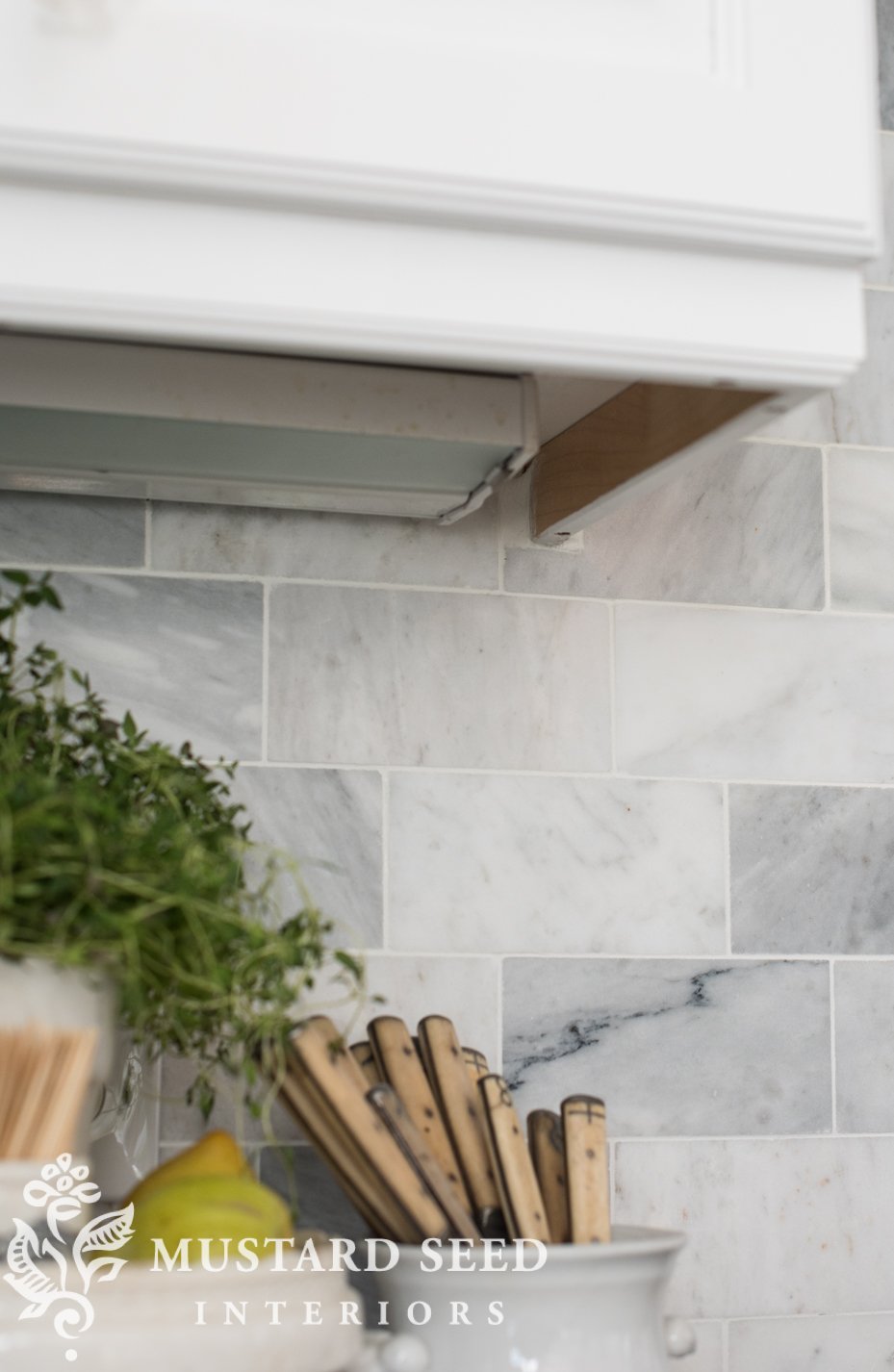 All of the changes happened behind closed doors, so it’s not a dramatic makeover, but it is to me.   The changes are not only more functional, but it feels more like we’re fully settled into the kitchen.  It’s no longer in the post-move-dump state, but everything is in a well-thought-out place. 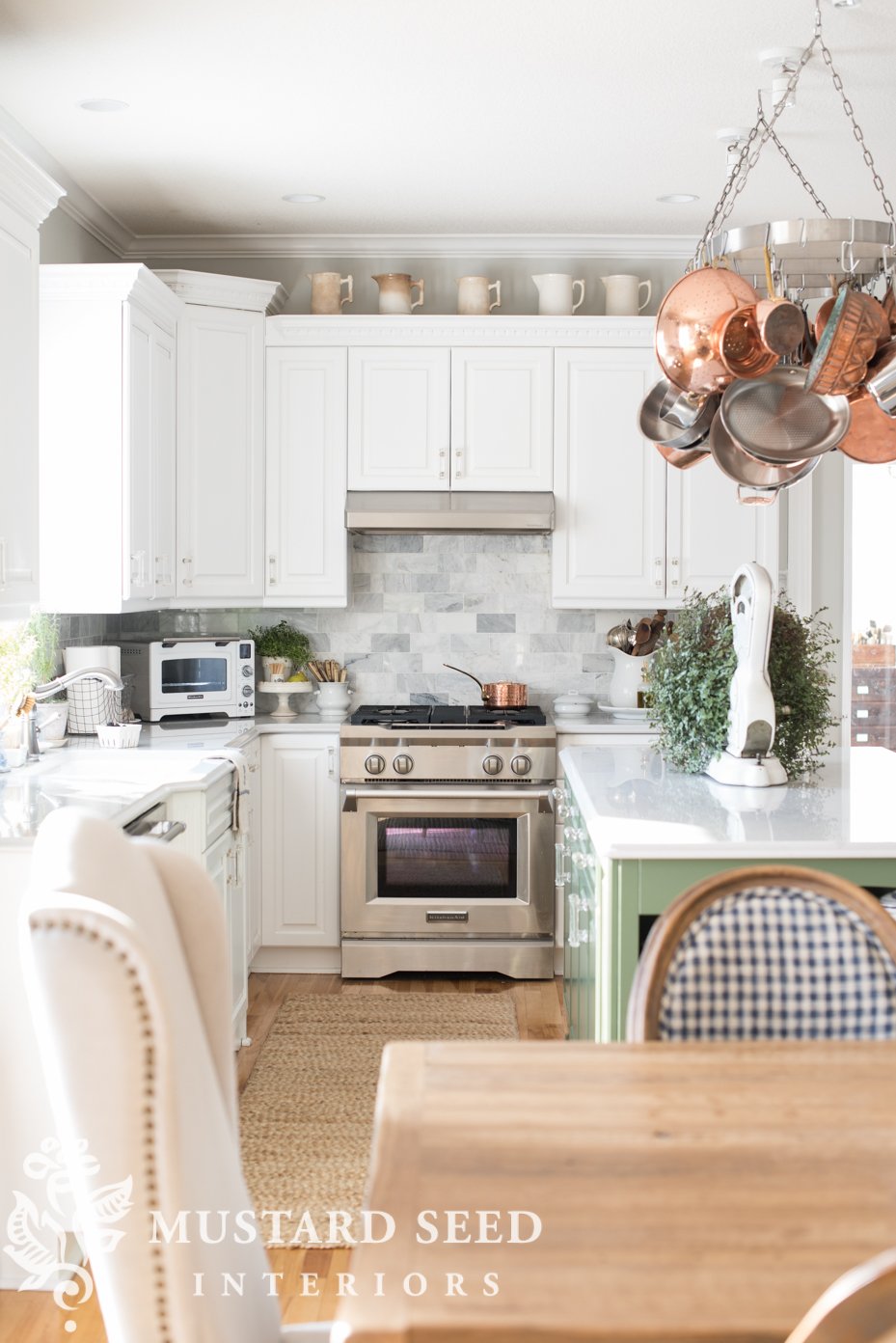 And just for fun, here is how the kitchen looked shortly after we moved in.  We already had a new dishwasher installed (the old one was damaged from hard water), hung the pot rack, and switched out the lights over the island, but everything else was as we bought it. 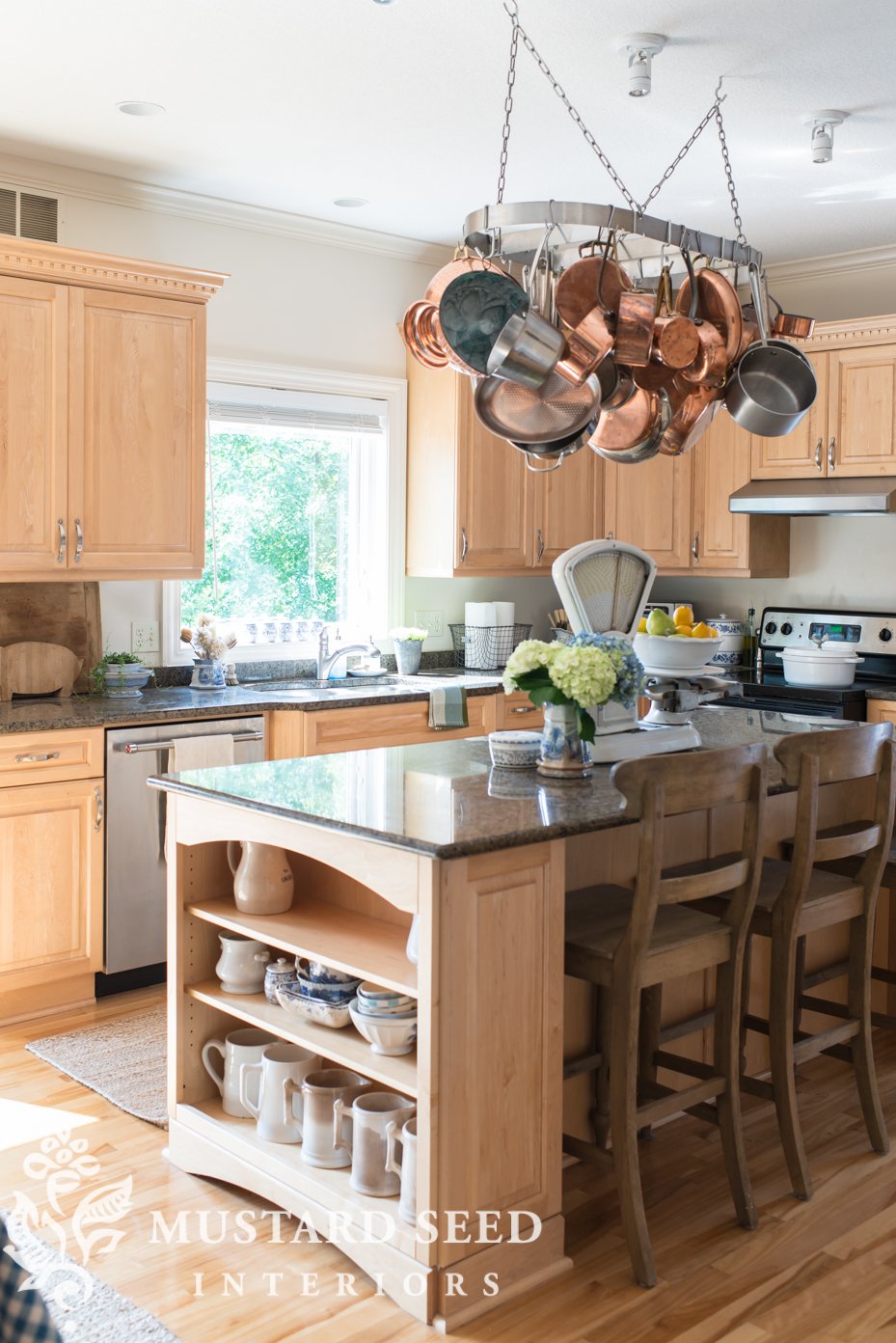 The change is pretty incredible, isn’t it? 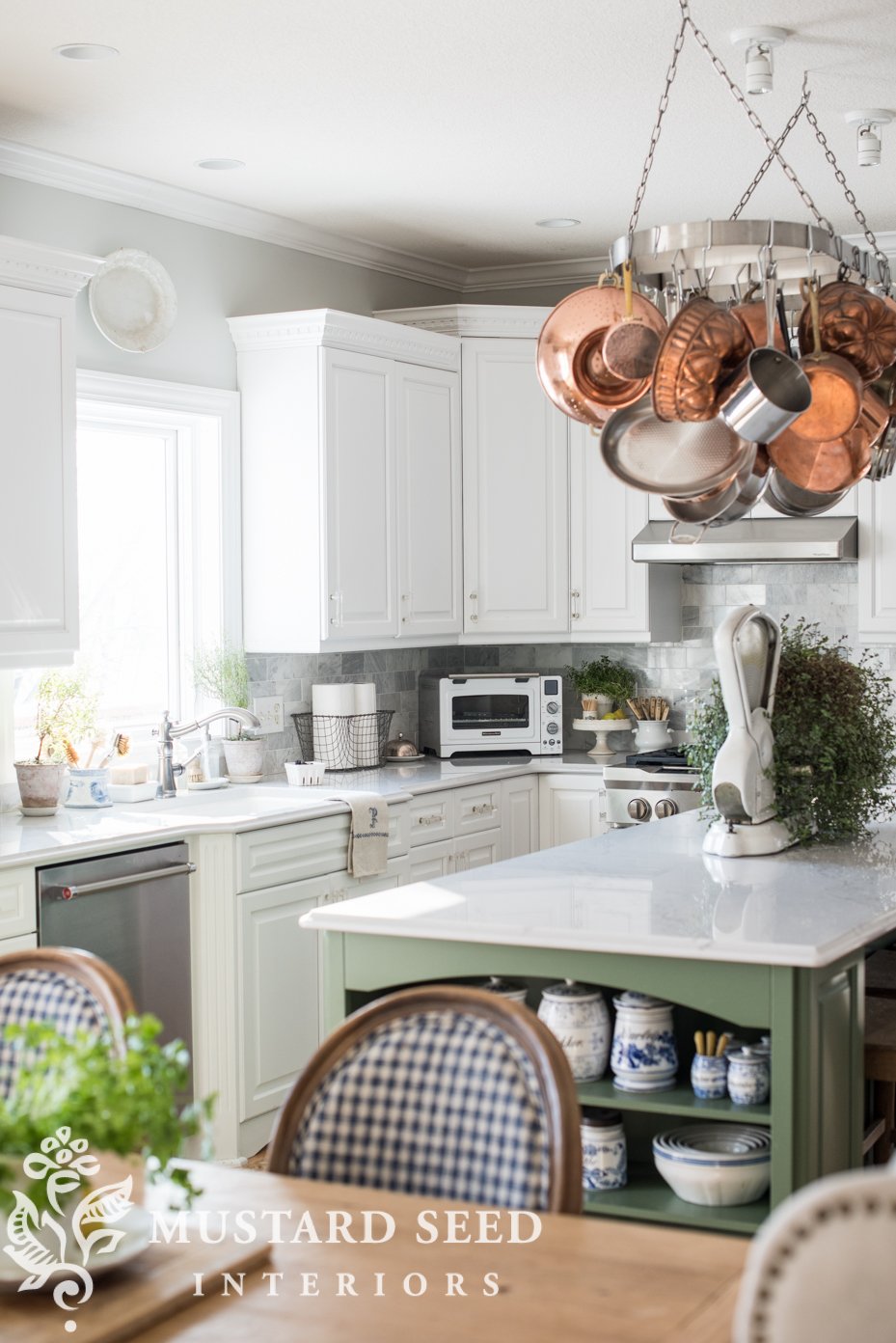