Disclosure: This post is sponsored by Walmart. As always, all opinions and words are honest and my own.

Believe it or not, there are rooms in this house that have been furnished, but are otherwise untouched.  I haven’t painted the trim or walls or intentionally decorated them.  One of those rooms was the boys’ bathroom.  And, it was probably the worst room in the house.  The paint had been slopped on the walls, getting it on all the tub, floor, and all of the fixtures.  The faucets were crusted from 13 years of running without a water softener and the light fixtures were rusted.

With some paint, repurposing, new fixtures, and a few new accessories, this bathroom feels like a completely new space.  The best compliment I received was when Marshall looked over my shoulder while I was editing the photos and asked who that bathroom belonged to.  (He hadn’t seen it finished, yet.)  “It’s yours!” 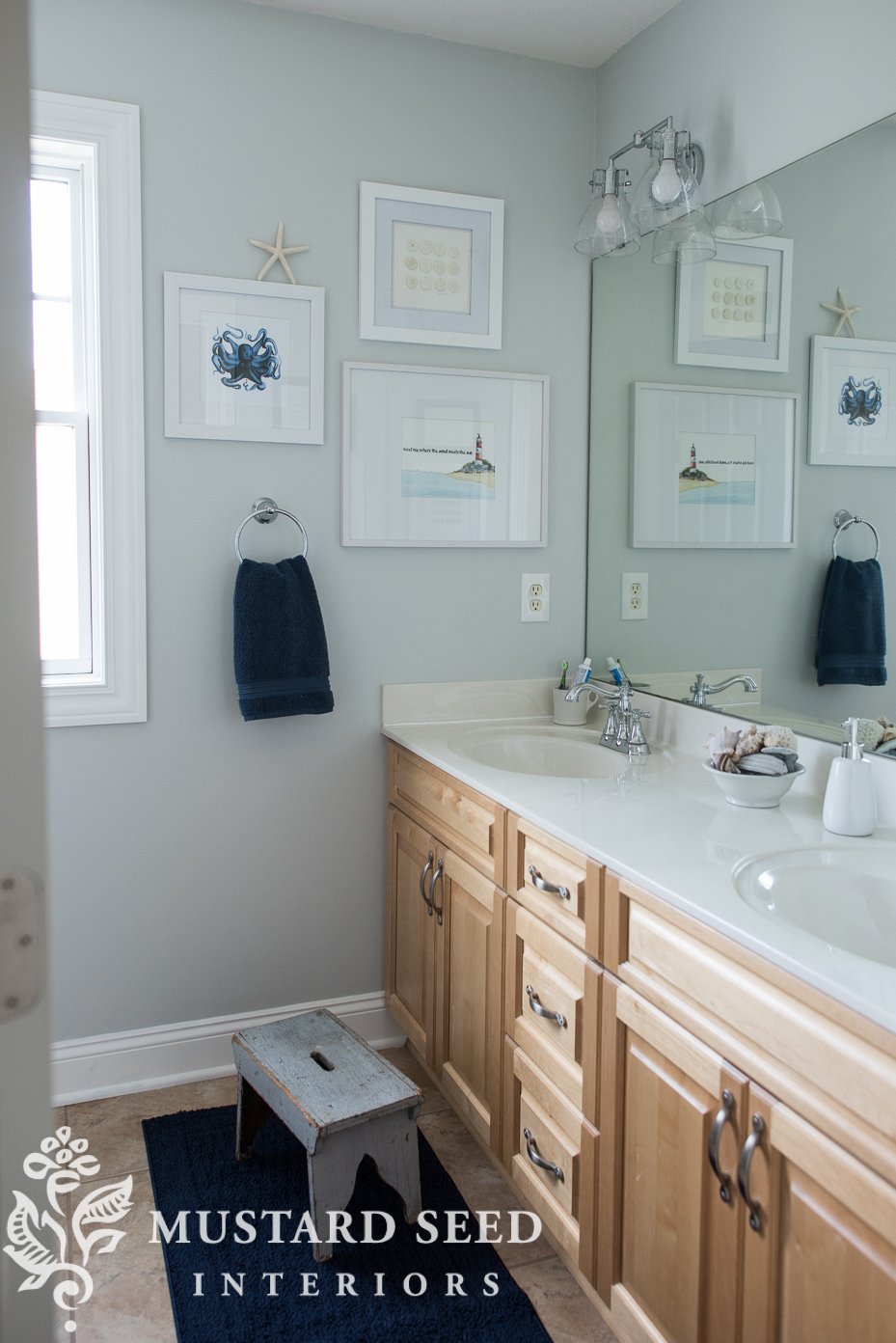 Here’s how the bathroom started… 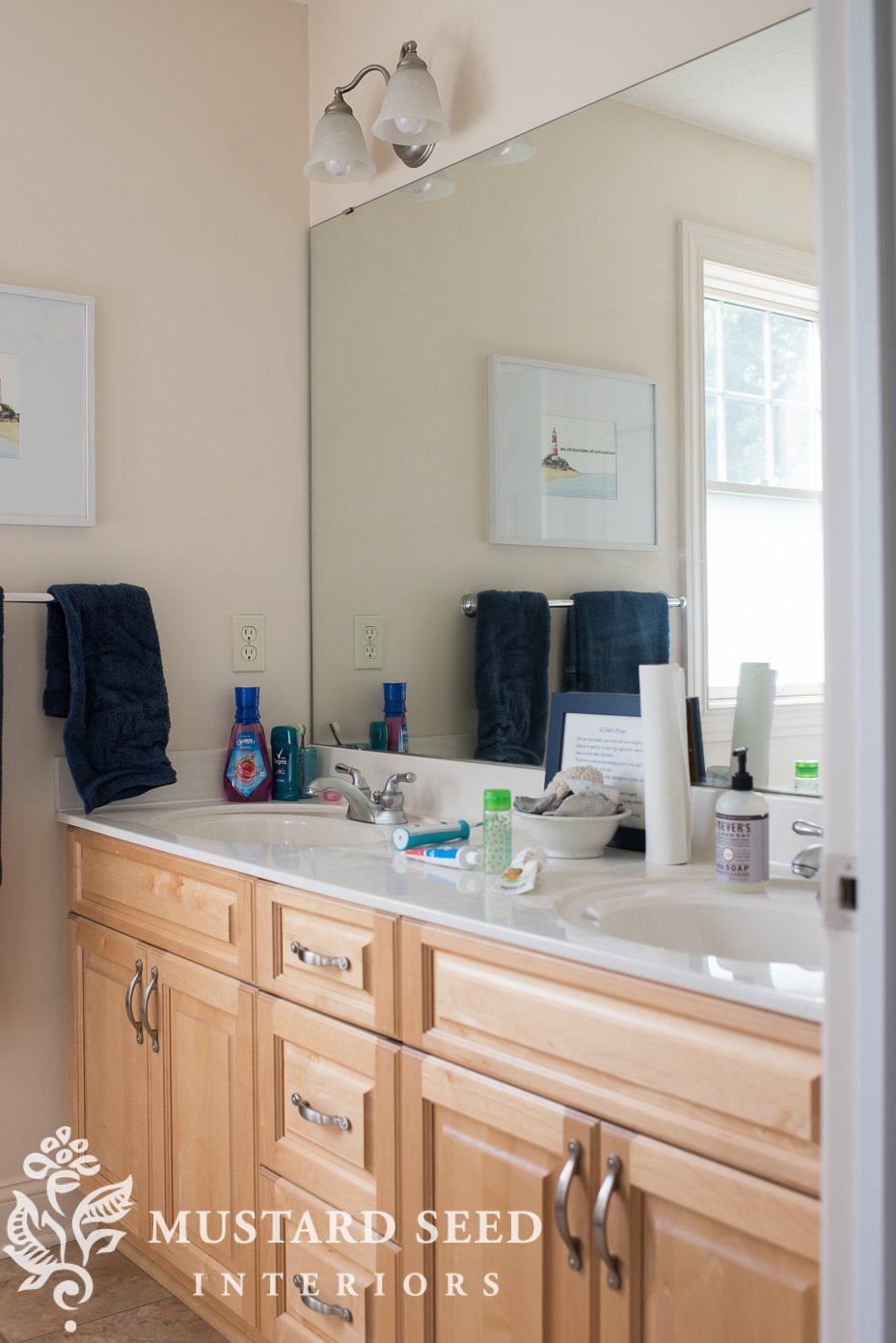 It had the same peachy off-white walls and trim as the rest of the house.

The shower curtain rod was crusted with hard water residue and the sticker was permanently affixed to it, so I decided to replace it.  I also wanted to install the rod higher.

You can’s see it in the photo, but the tub had splatters and drips of the wall paint all around the edge and the top, so I took some time to get those cleaned up. 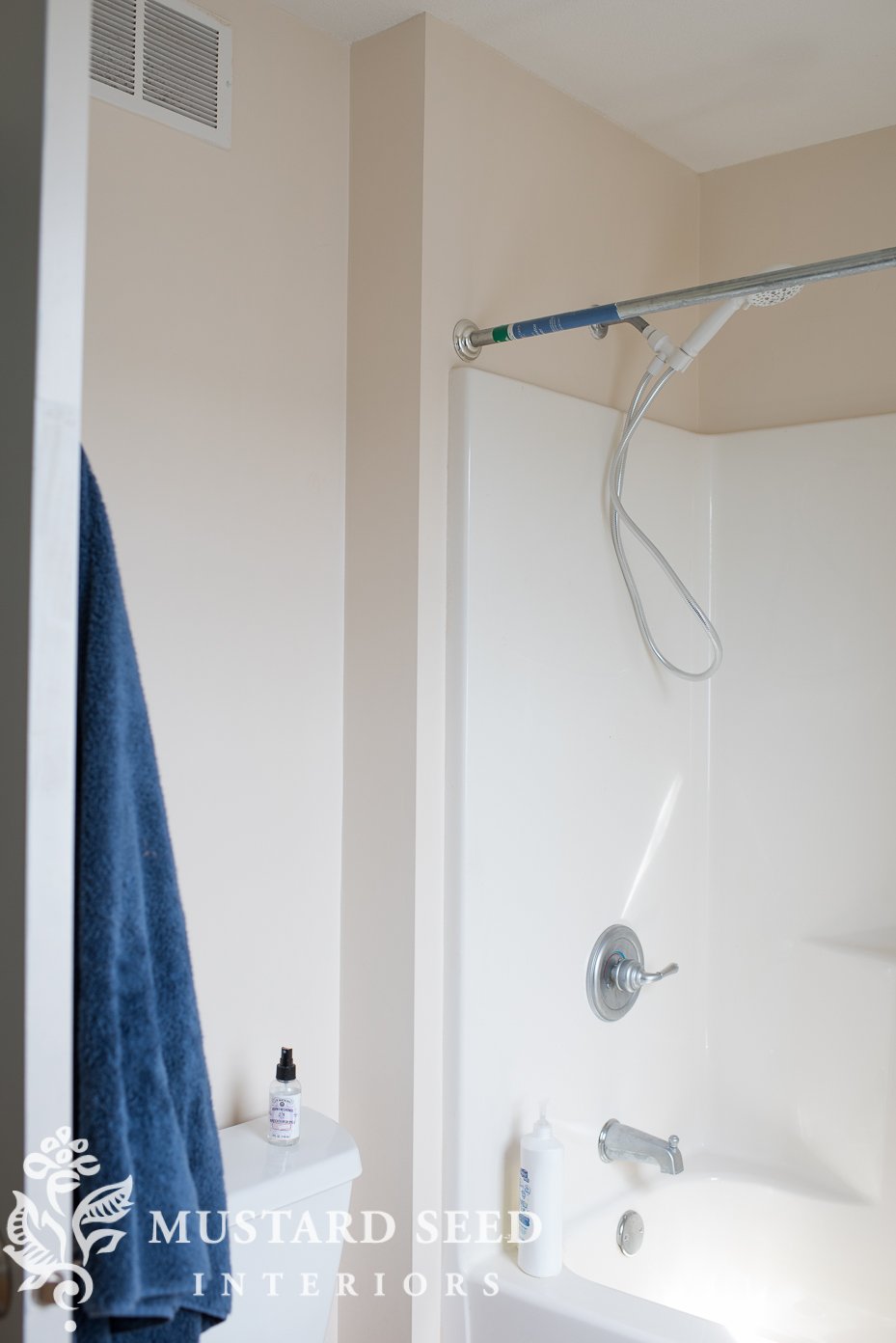 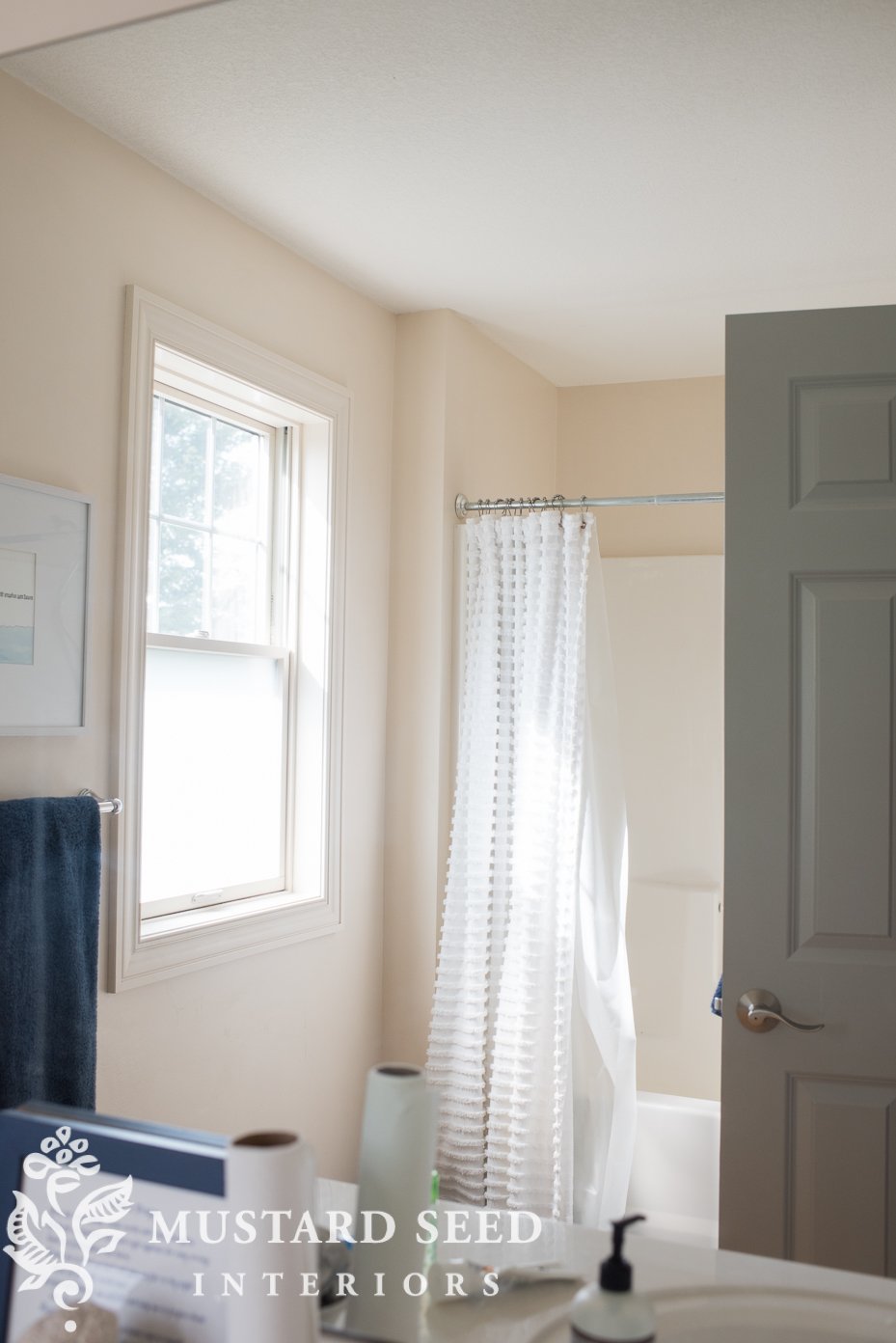 And here is a closer look at the rusted light fixtures… 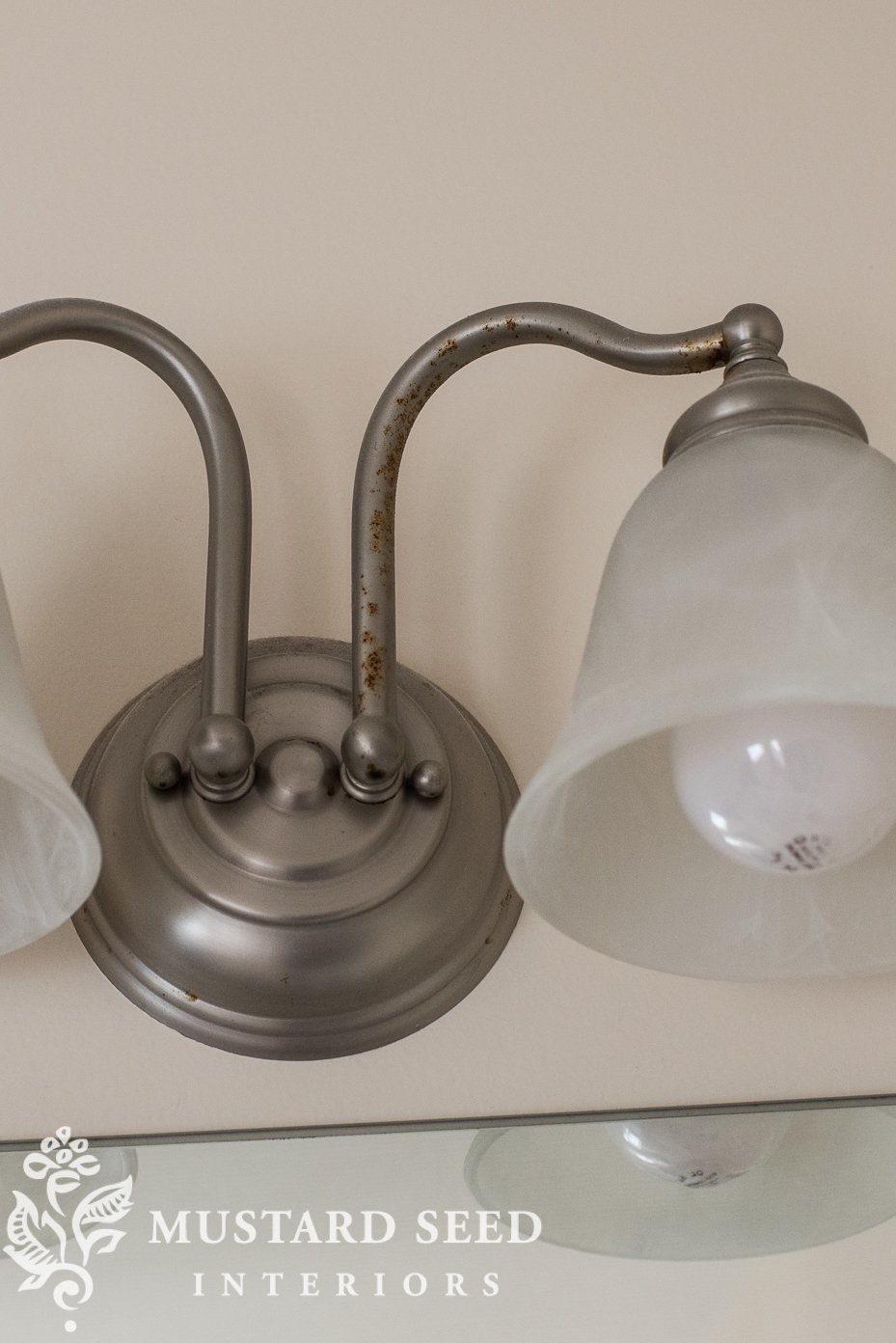 So, now that you’ve seen how the room started, let’s back up and break down the refresh.

I knew going into this makeover that I didn’t want to spend a ton of money on a bathroom for two pre-teen boys.  So I ended up combing Walmart Home for things that were nice but would be inexpensive.  The light fixtures, faucets, and accessories all elevated the room without busting the budget.

First of all, I painted the walls and trim the same colors as the hallway.  I looked at all sorts of paint and wallpaper swatches and thought about different techniques I could try, but in the end, I decided to use paint I already had and keep it simple.  That was partly to keep the budget down and partly because I’m still having issues with my shoulder and I didn’t want to get too ambitious.  Plus, a mid-tone color is great for a bathroom.  It’ll hide splashes and splatters.

It also looks cohesive given that the room is at the end of the hall, so you can see it from anywhere in the hall and from the bottom of the steps. 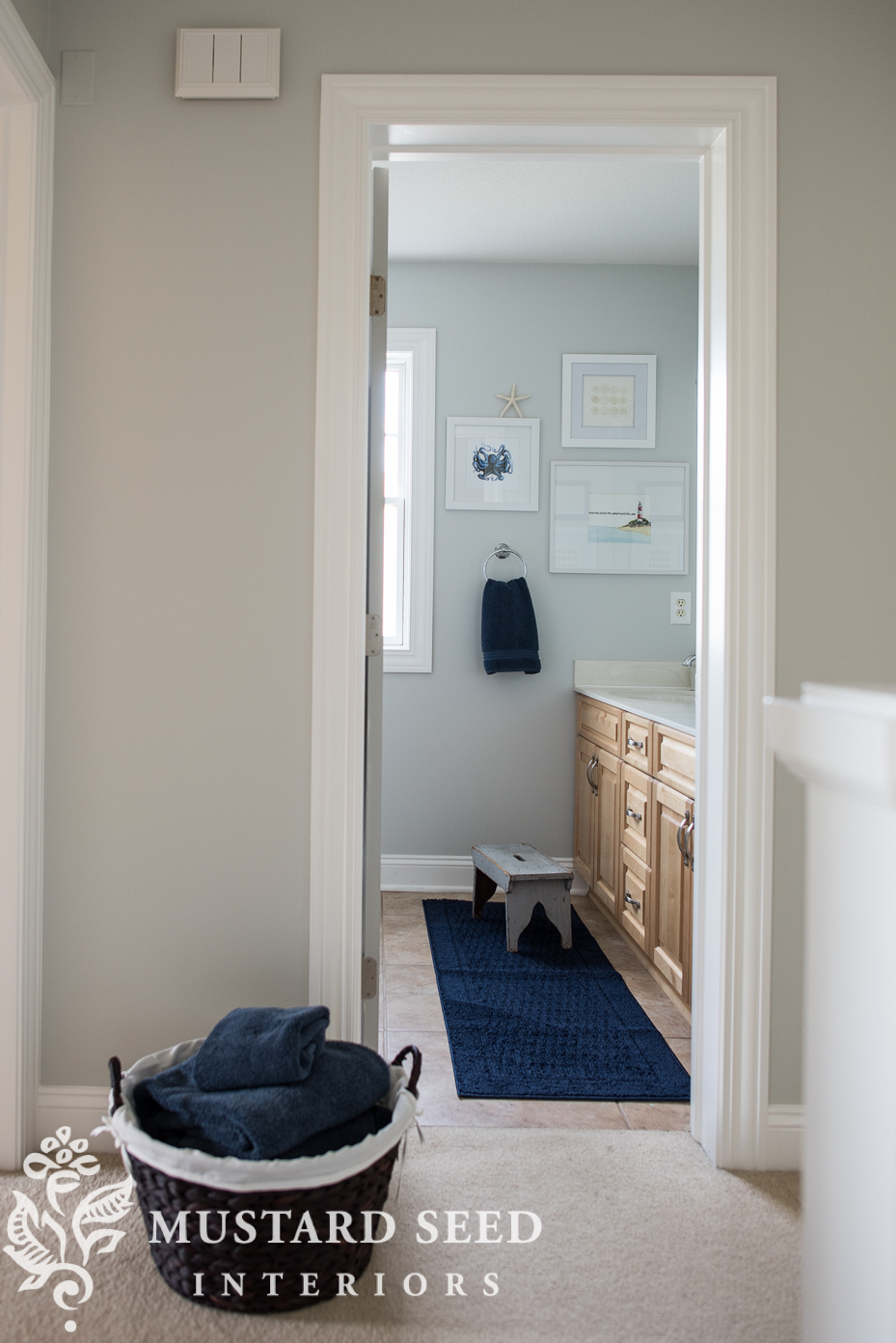 HERE’s a link to the lined laundry basket.  (I need to throw that rug in the dryer to try to get the creases out!) 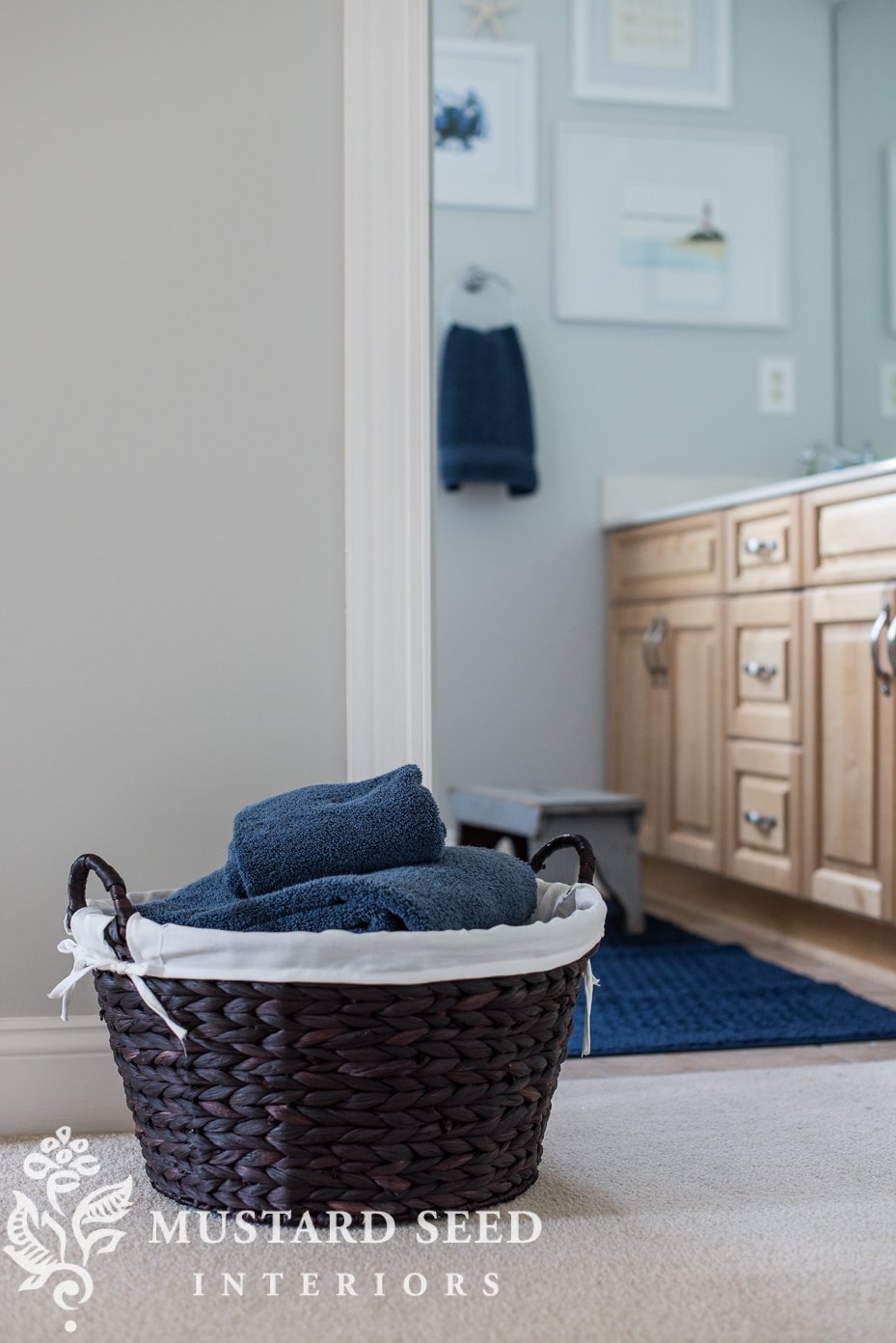 I removed the towel bar and replaced it with THIS towel ring.  I find towel bars to be messy and prefer hooks for bath towels and rings or hooks for hand towels.  I rehung my original lighthouse watercolor, but I added an octopus print and some shell art I made.  A tutorial is coming soon. 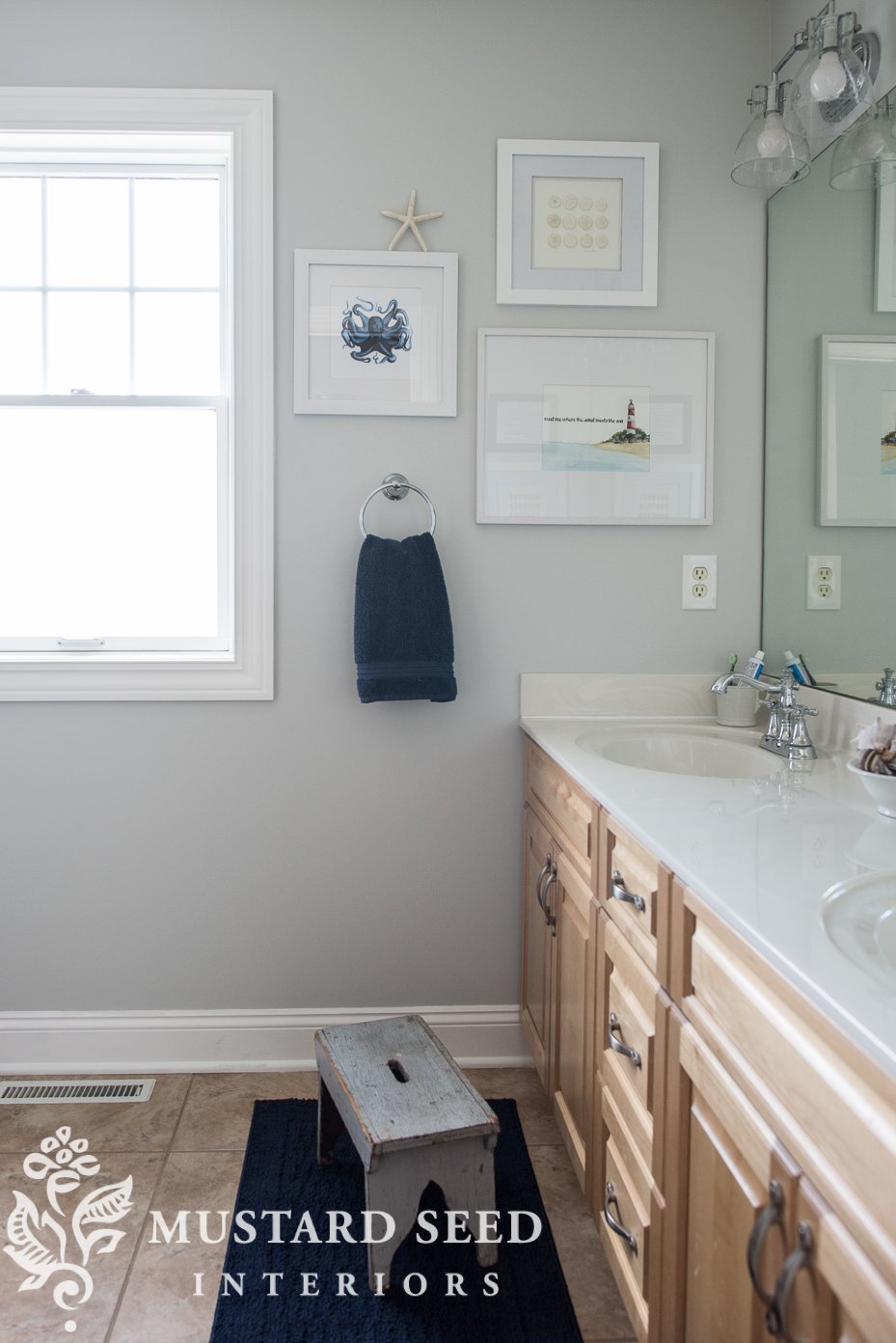 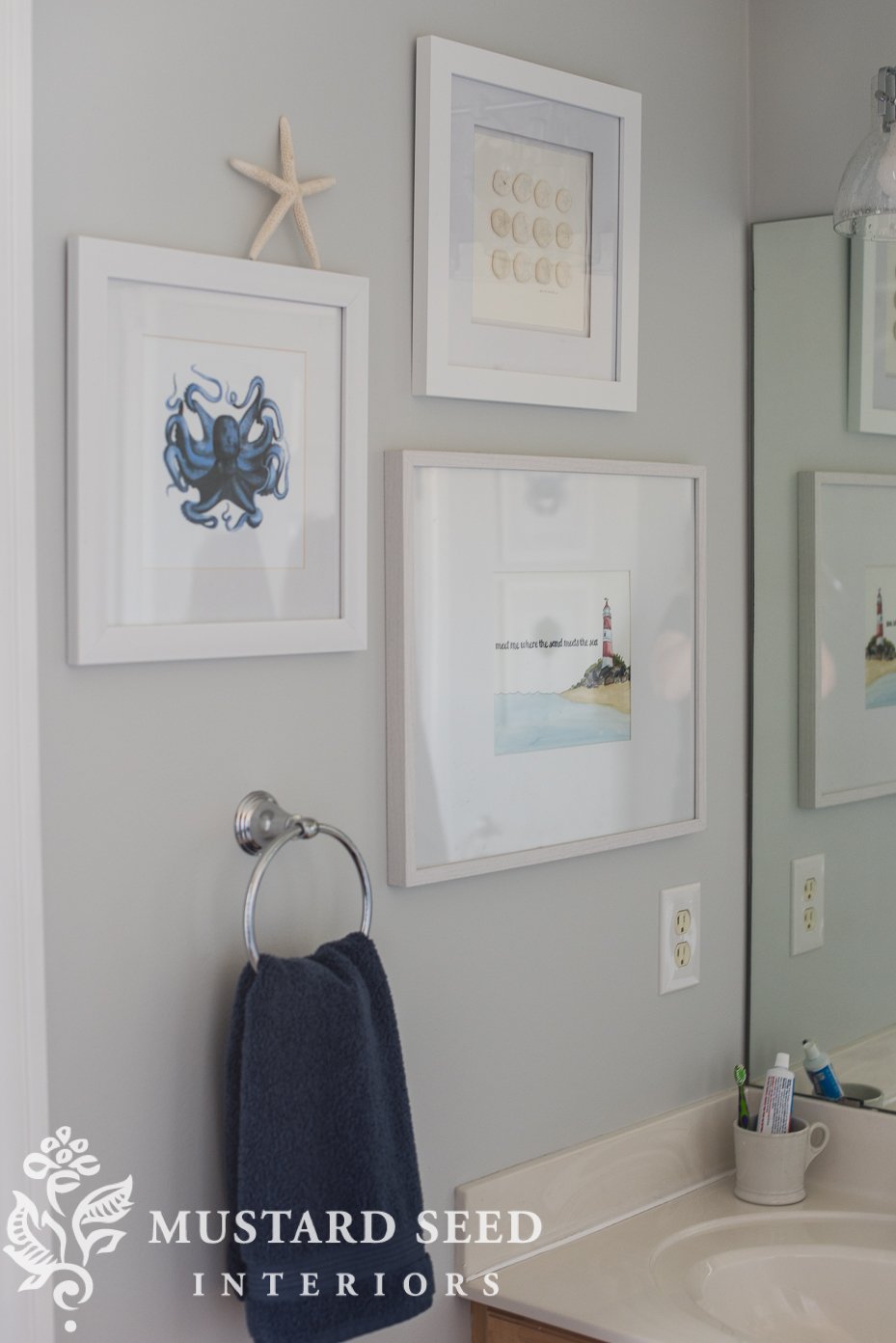 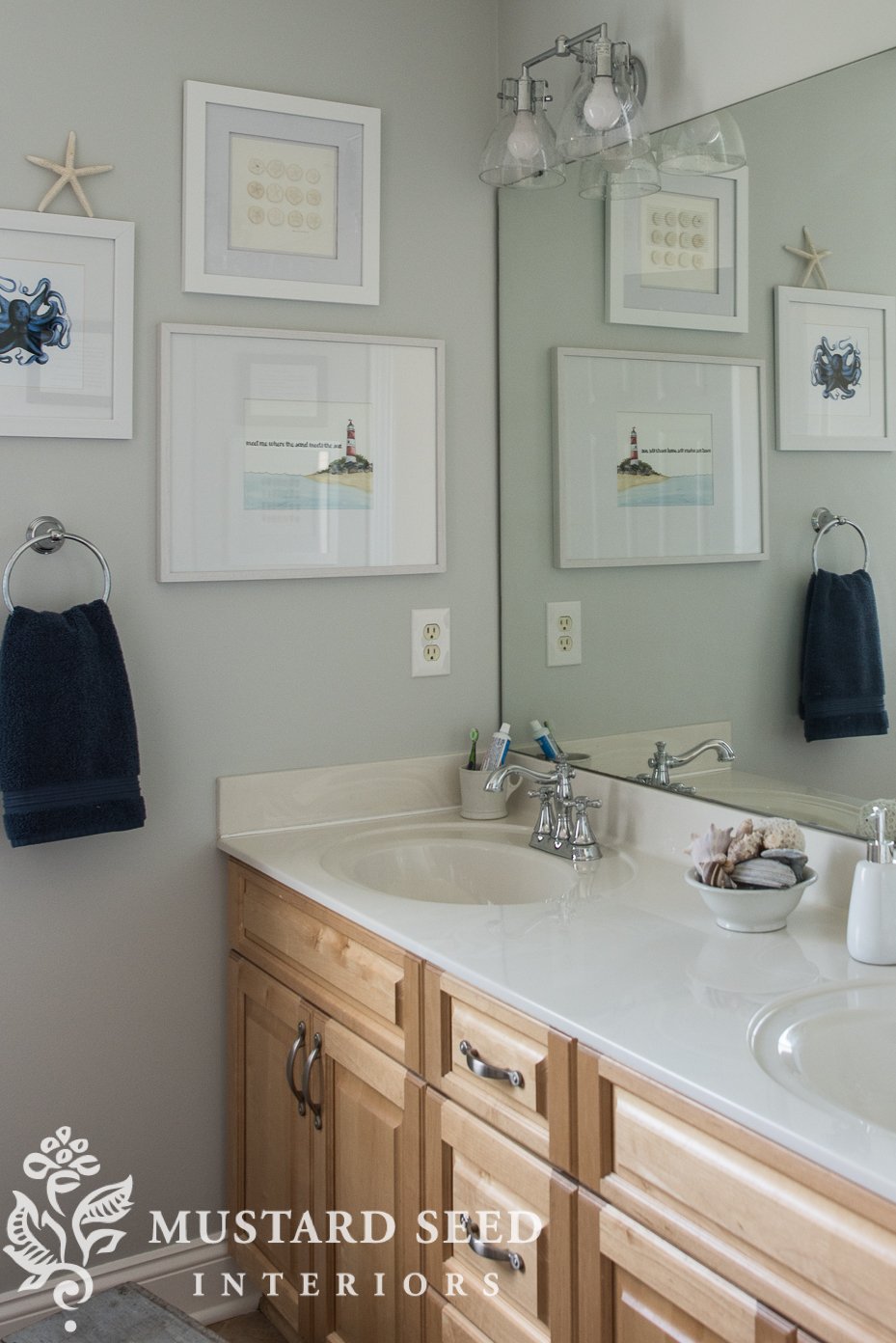 The light fixtures ended up hanging over the mirror a bit, but I really don’t mind the look.  If I could redesign it, I would move them up, but that’s a bit more involved than a refresh!  The fixtures have a clean, nautical feel that works well with everything else.  THESE are the ones I bought. 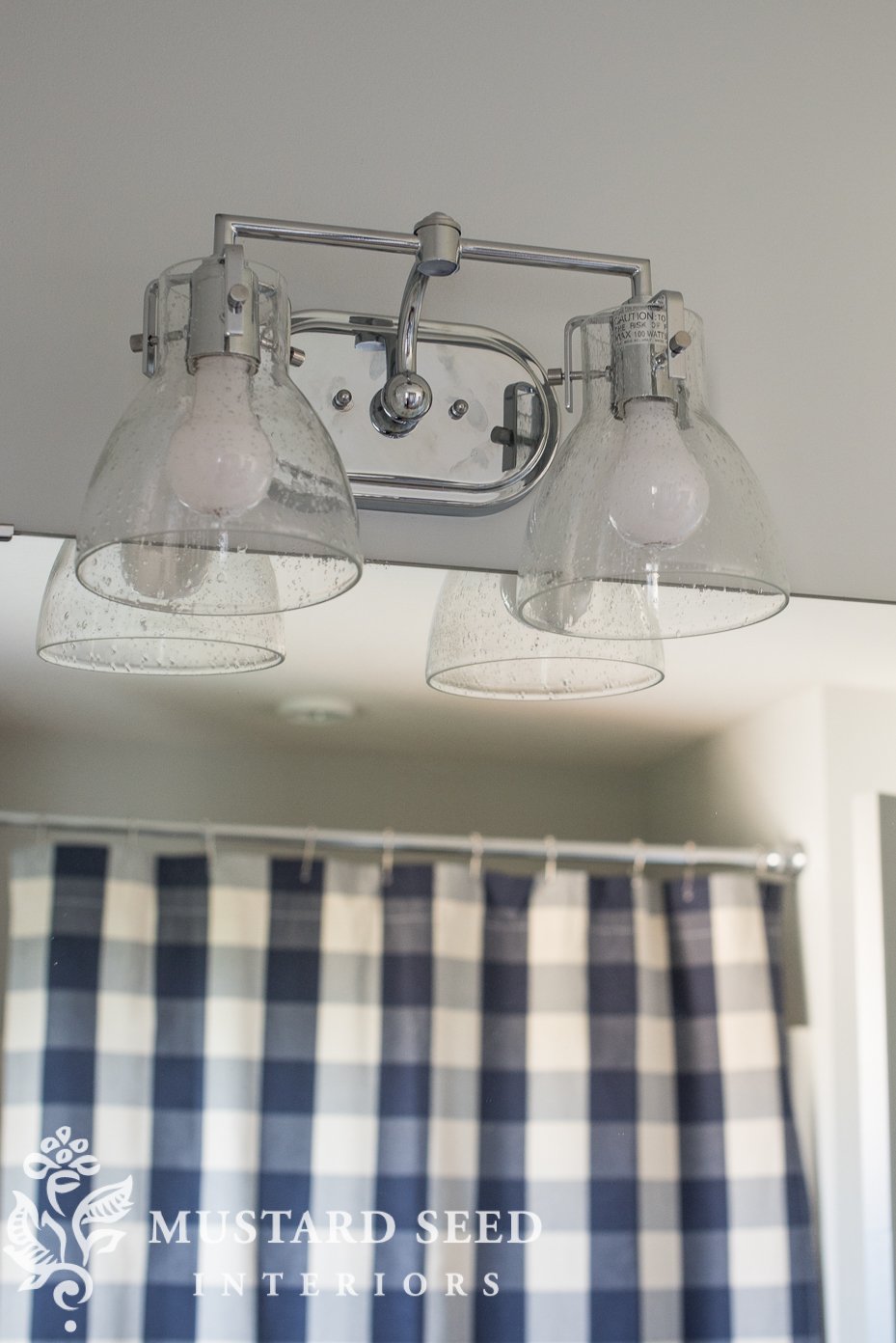 The biggest splurge in the room is the Cassidy faucets from Delta. 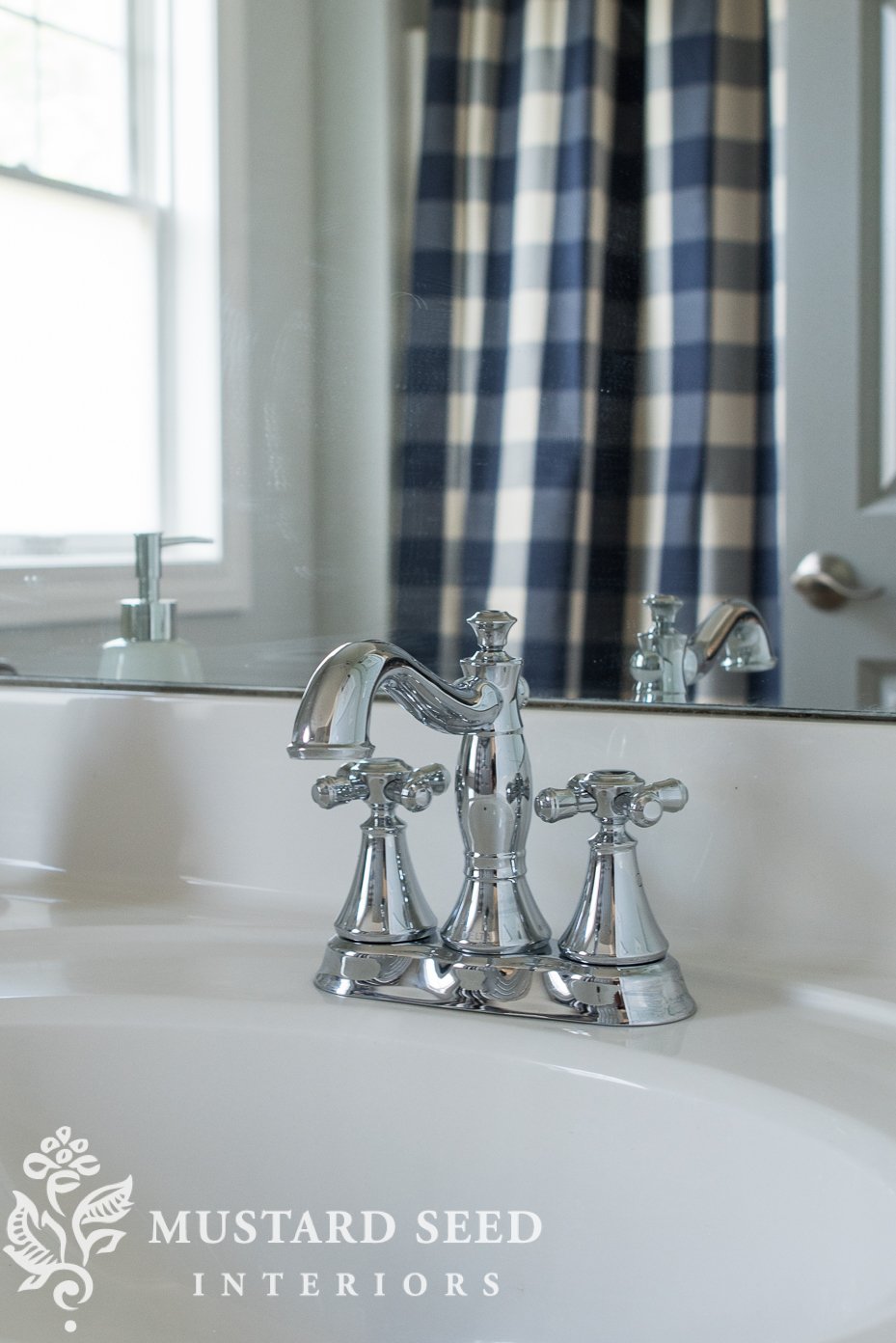 They make such a difference, though!  I love the handles and the spout that gives a little more room for washing hands and getting a drink after brushing teeth.  And the faucets needed to be replaced for the sake of function, not just looks. 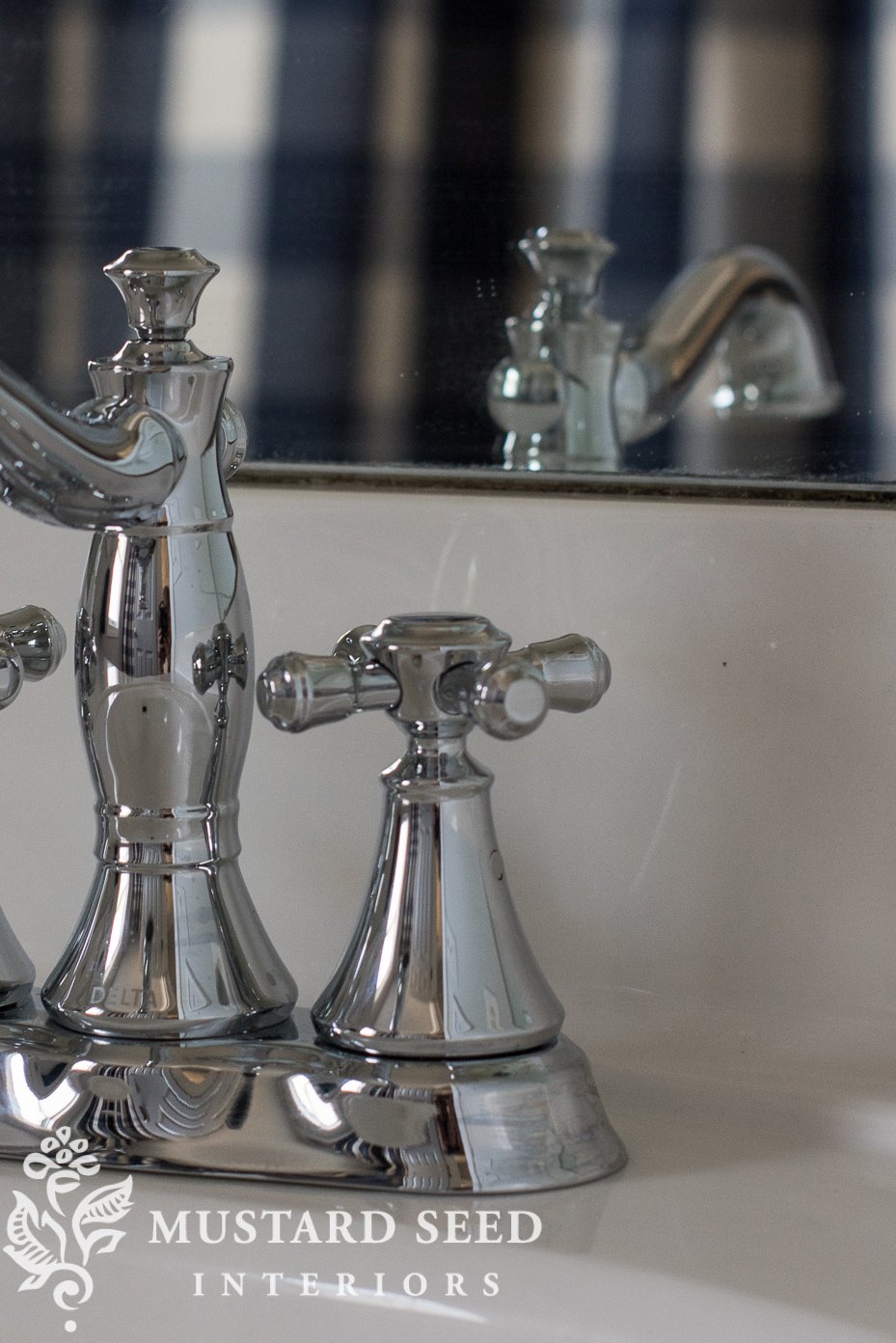 I also picked up an inexpensive soap pump.  I couldn’t find it online to provide a link, but I purchased it at my local Walmart. 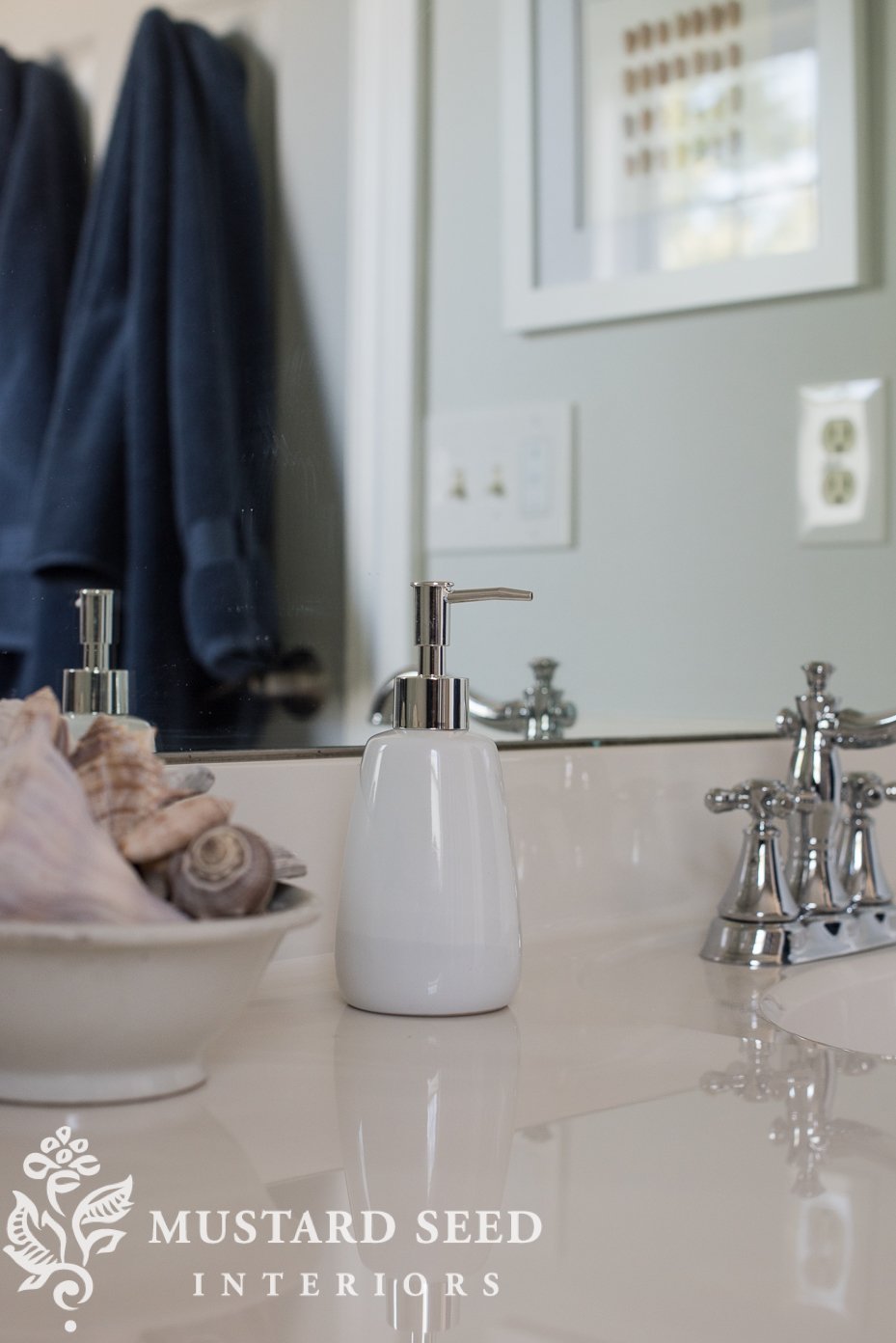 On the other side of the sink, I hung another piece of shell art (THESE are the frames I used) and a framed Child’s Prayer that I was given when Marshall was born. 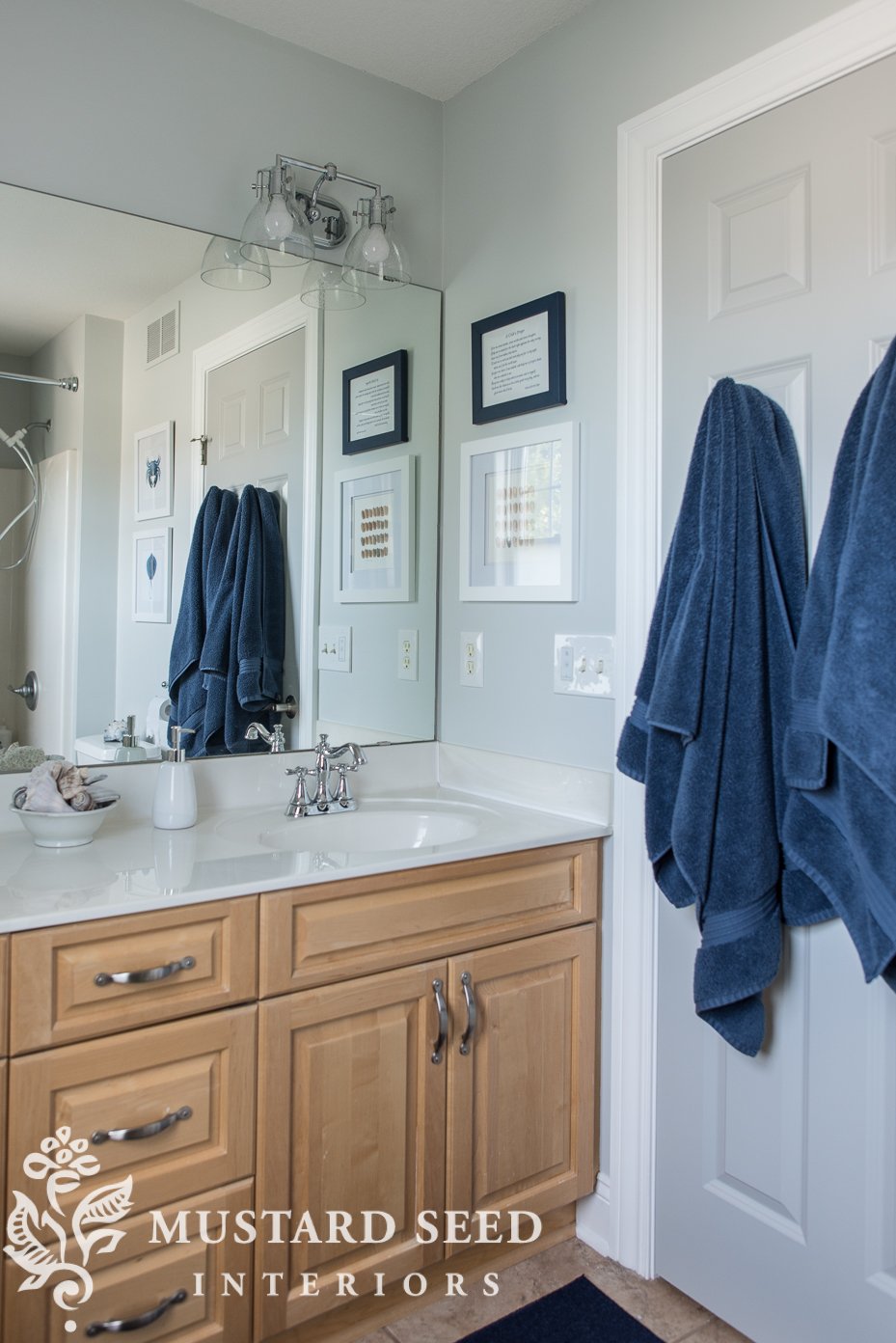 It’s a beautiful reminder for our boys (and us) and I try to always have it hanging in a visible place. 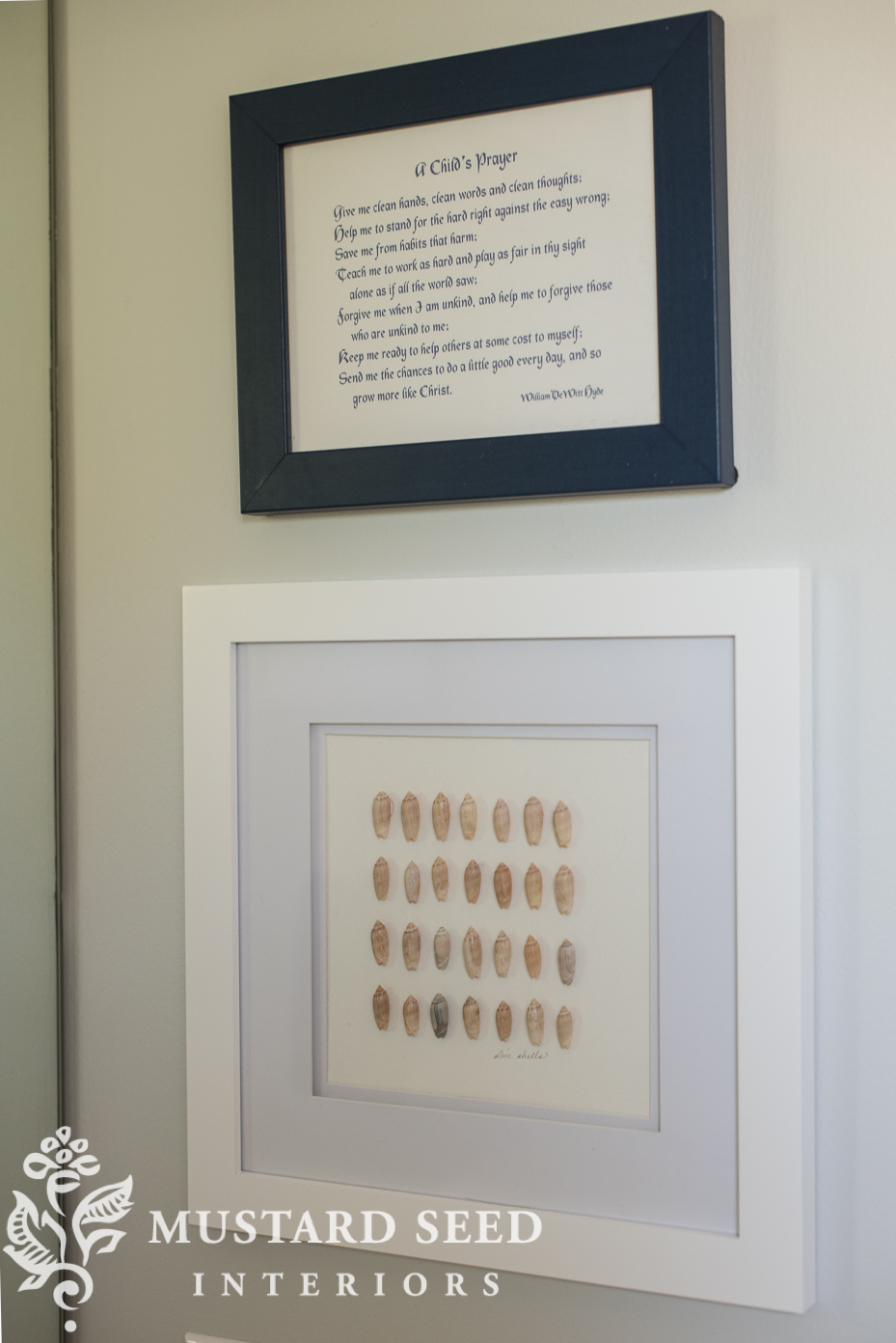 On the floor in front of the sink, I added a runner with a rubber back, so it won’t slip around and will catch drips.  It’s also thin enough to fit under the door as it opens and closes.

I found this sweet antique stool at Gold Rush a couple of weeks ago and it’s perfect for this room.  The boys are tall enough that they don’t need a stool, but I’ll put it under the window. 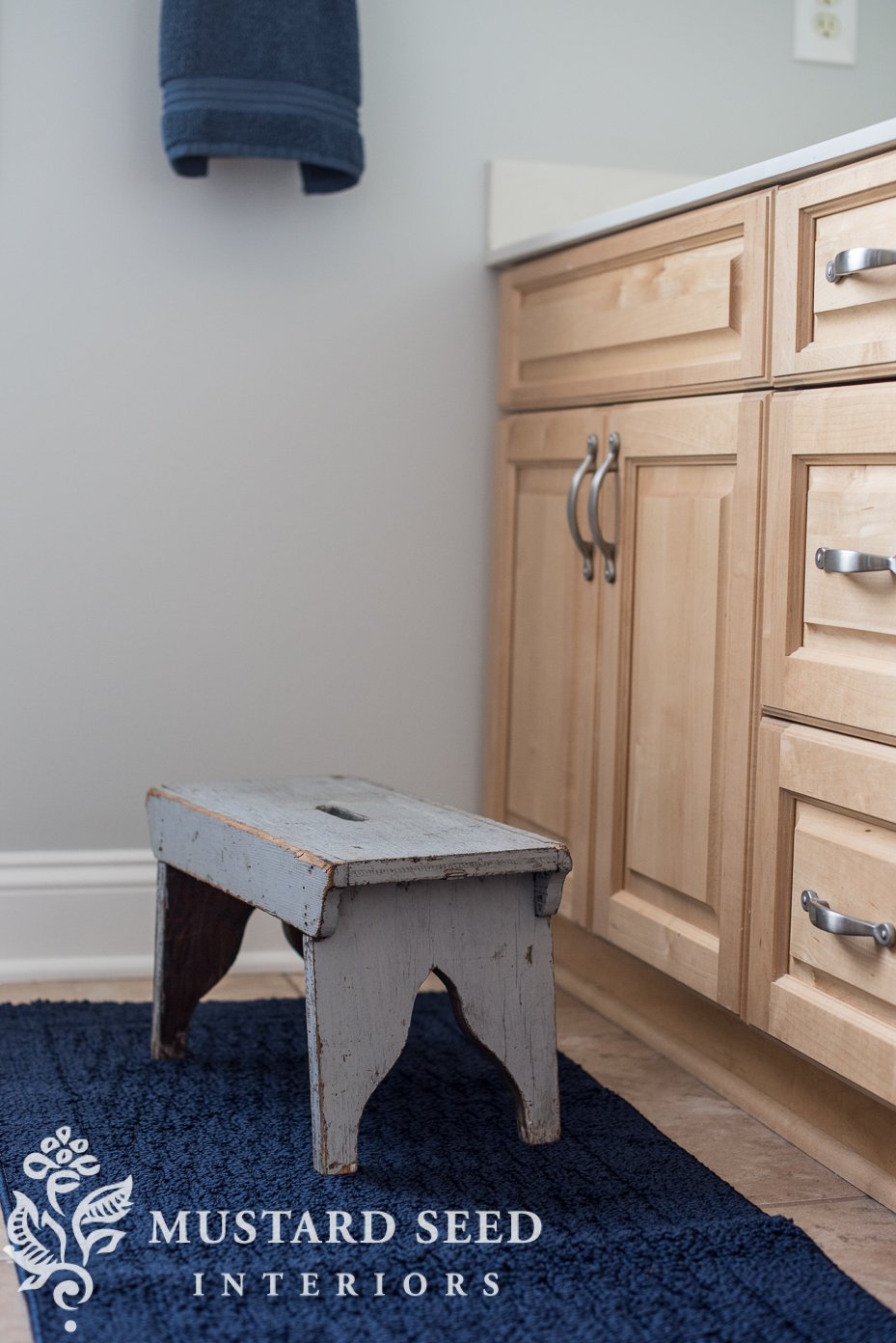 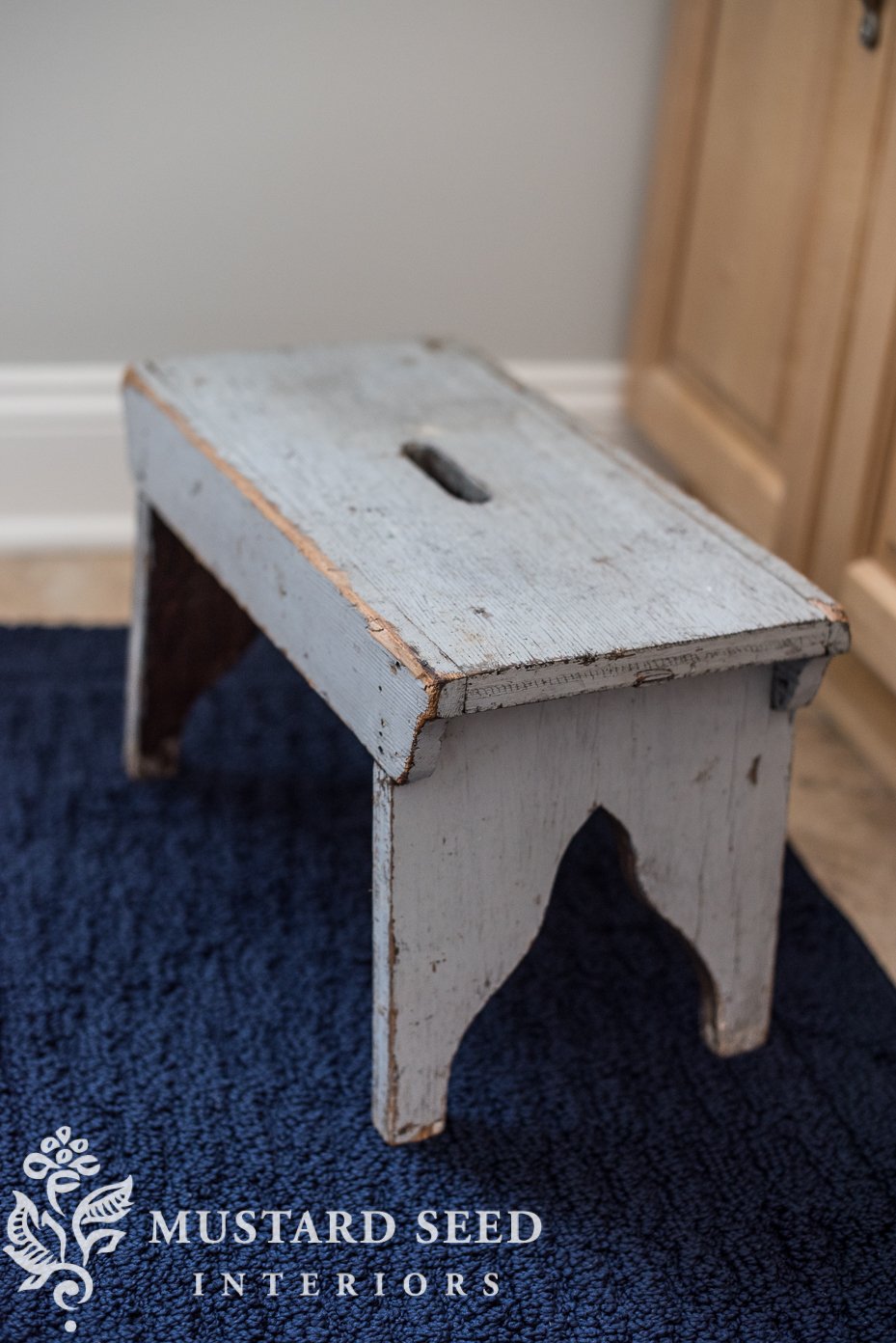 On the other side of the room, we hung two coastal wall art prints (they came in a set with the octopus.) 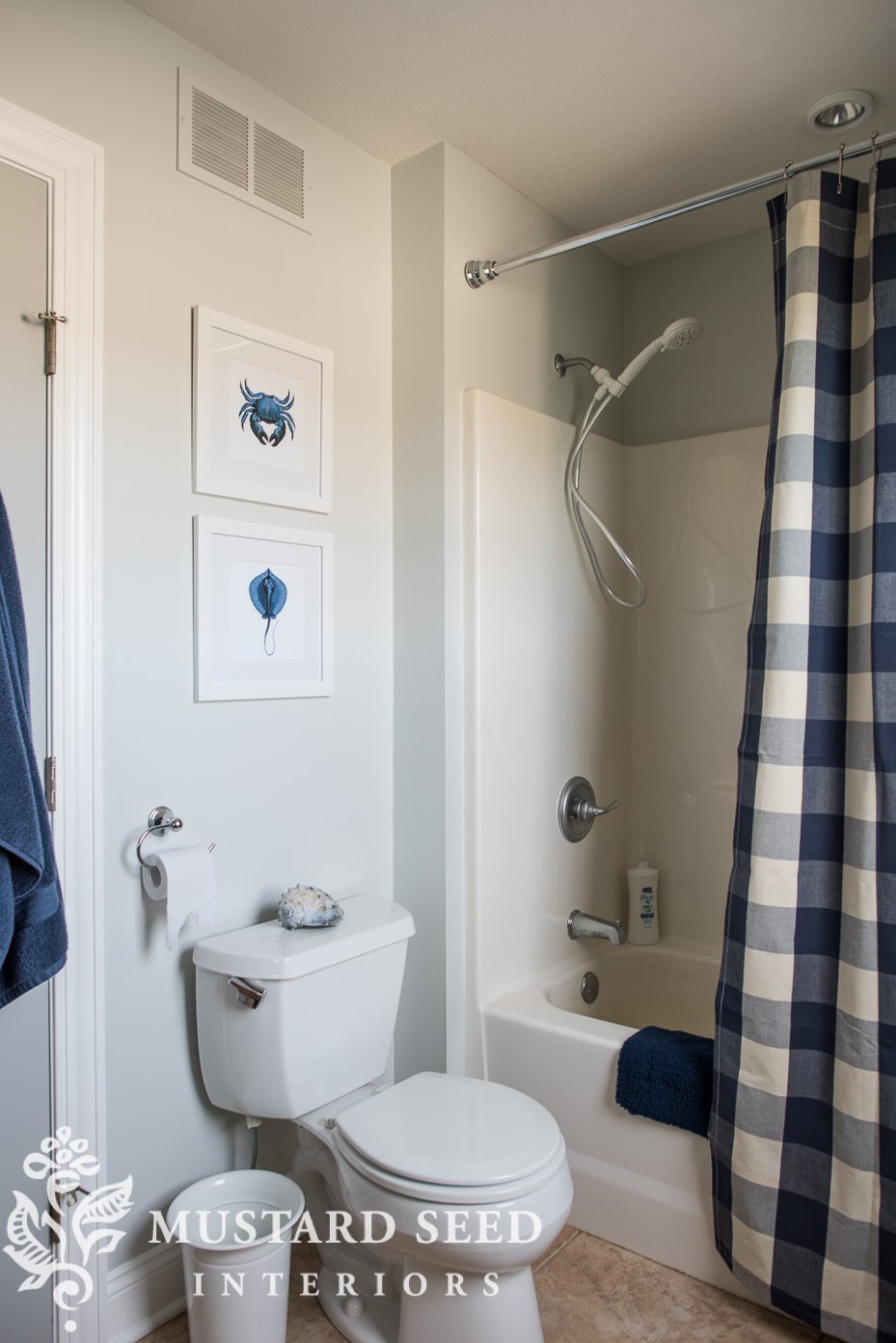 I used the TP holder we already had, but I cleaned it all up (it was splattered with paint) and it looks like new!  I’ll share how I did it in another post. 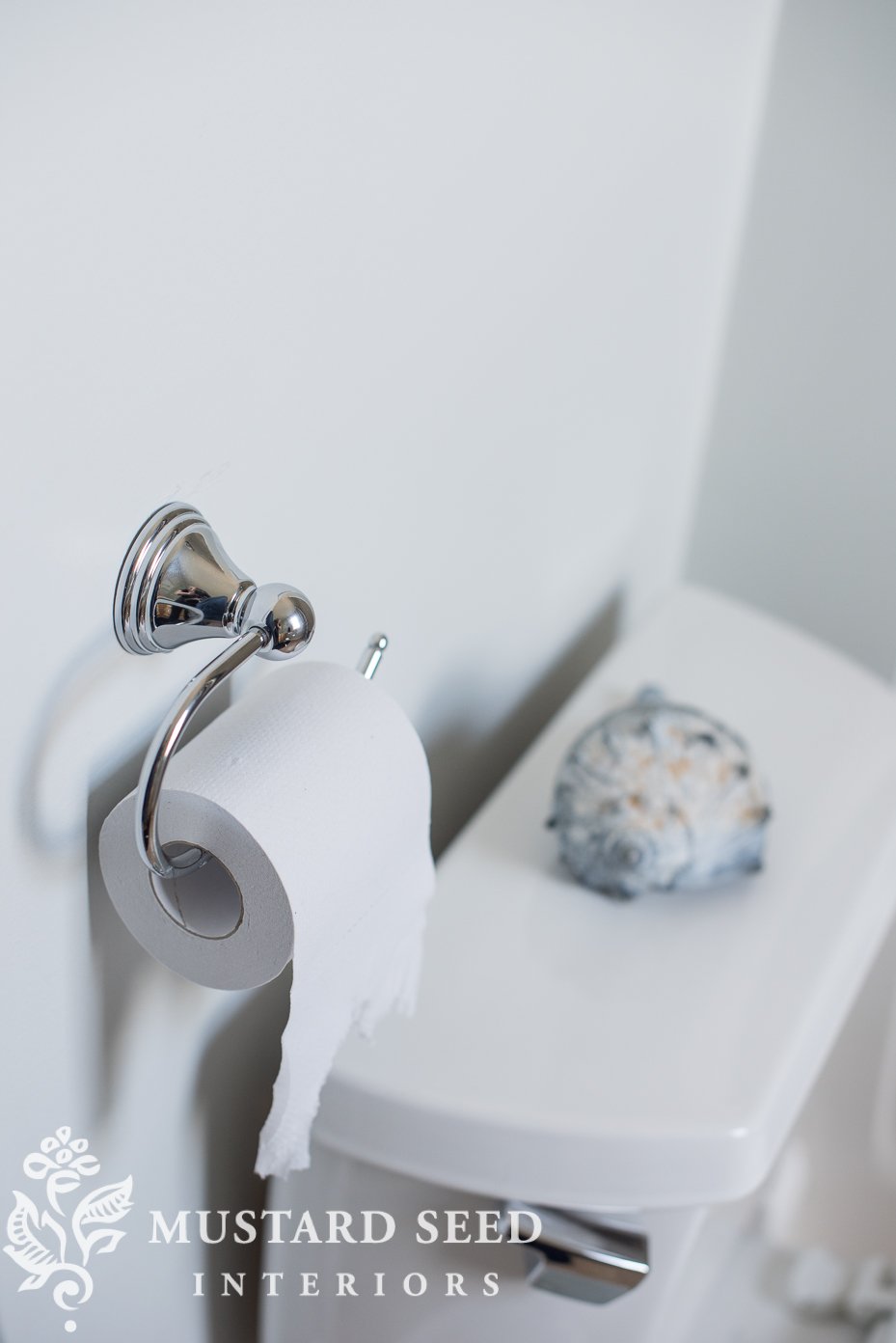 We removed the old shower curtain rod and replaced it with THIS ONE.   The trick to raising a shower curtain is to use a shower stall liner.  They are longer but not as wide as a traditional shower curtain.  The reduced width means they will fit a hemmed piece of decorator fabric, too!  A longer curtain visually fills the space better.

I modified a curtain I made for Calvin’s room in our PA house by adding buttonholes at the top for the shower curtain rings.  I will share a tutorial on how to make a custom shower curtain.

Since this isn’t as wide as a typical shower curtain, I will make a second one (I already have the fabric).  When open, we can have a curtain on either side or push them both to one side. 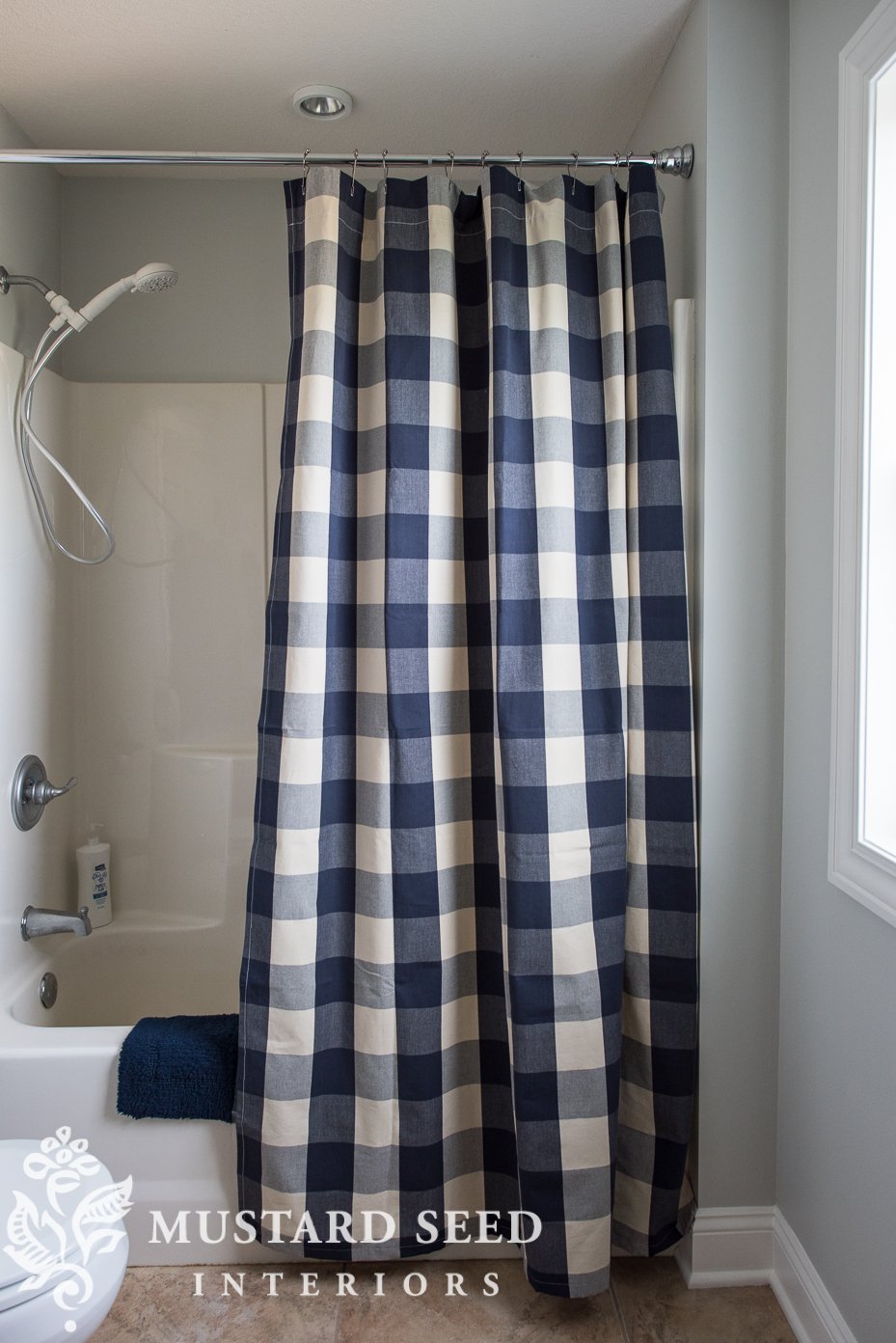 I like THESE RINGS, because they slide across the rod easily, they don’t pop open, they don’t rust, and they look nice and clean. 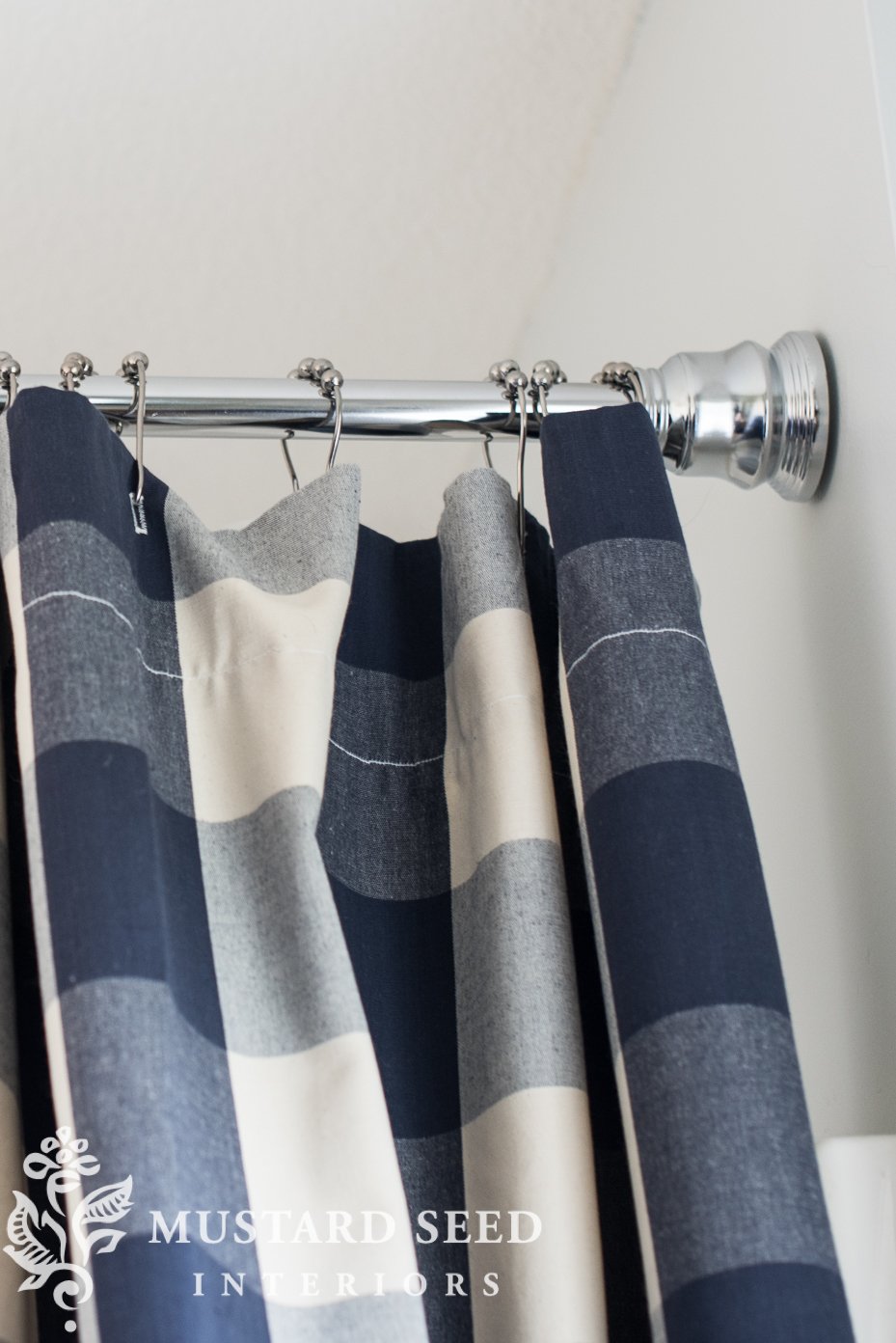 So, that’s it!  Quite a dramatic difference!

At some point, we’ll replace the floor tile with leftover slate from the foyer project.  I’m also planning to replace the cabinet hardware, so it matches the chrome fixtures (or I might go with glass), but I haven’t found something I really love, yet.  I also might paint the cabinets eventually, but we’ll tackle the floors first before I decide.

I asked Calvin if he liked his new bathroom and he said, “Oh yeah.  It’s awesome!” 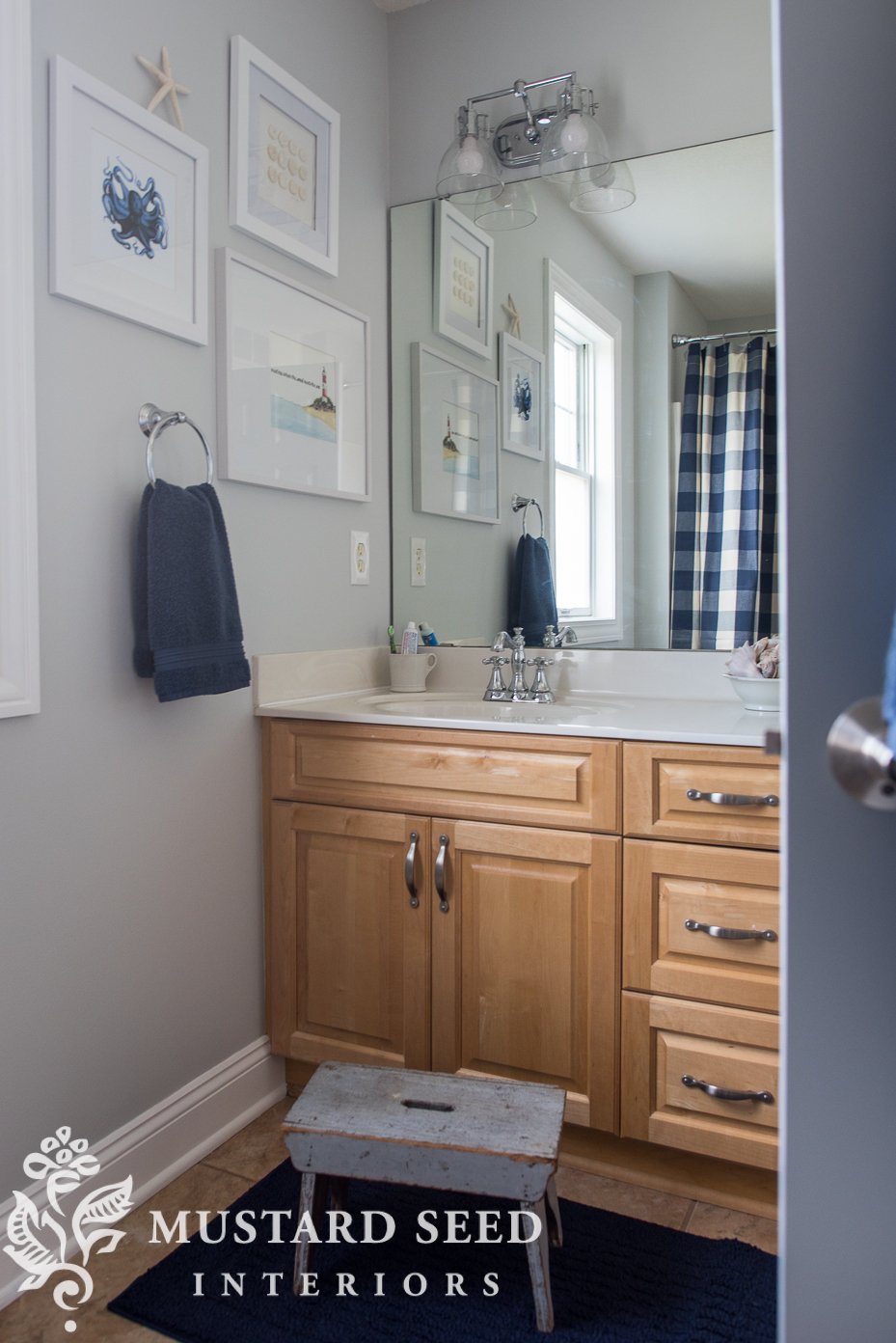 I’ll share how I cleaned the TP roll holder and tub along with tutorials for the shower curtain and custom shell art soon!