I’m having one of those days where I feel like I could write about five blog posts.  I just want to chat and tell you what I’ve been up to, what plans I have and some things that are are my mind.  The past few days, I’ve been in much more of a “doing mood” than a “taking-pictures-and-talking-about-it” mood.  And now I feel like chatting, but I don’t have a ton of time to write those five blog posts today.  So, I’m making a note of those things and I’ll share them here and there.

Today, though, I want to share the most exciting thing.  We finished the range hood!!  The counters made a huge difference, but the range hood is definitely the icing on the cake.  It looks so custom and gourmet and high end and all of those things that are desirable in a kitchen. 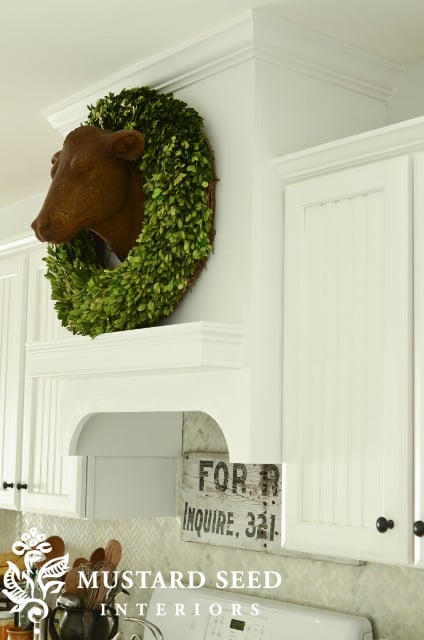 I posted this peek of it on my Facebook page yesterday…

…and had quite the reaction to the cow head.  Some people thought it was a REAL cow head!  Now, I’m not opposed to taxidermy, but I don’t think I would want a stuffed cow head right above my stove.  No, it’s a metal cow head.  Though, I understand that looking up at this while cooking some hamburger meat might be unsettling enough… 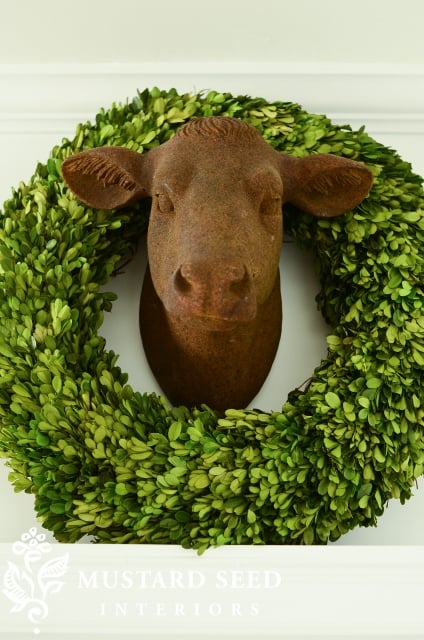 I am a vegetarian and my family doesn’t eat meat at home, so it’s not an issue for me.  The cow and I can be at peace with one another as I’m flipping a black bean burger.

So, why do I like the cow head?  Despite my denials, I guess I do have a thing for cows.  I don’t want to fill a curio with cow figurines, but I really love my cow paintings.  The cow head ties into that, but it also reminds me of the bullheads hung in European butcher shops.  I grew up in Germany and I tend to sway towards things that remind me of the decor I loved so much as a child.  (My dollhouse was filled with hand painted bauernmalerei beds with red-checked feather deckers.) 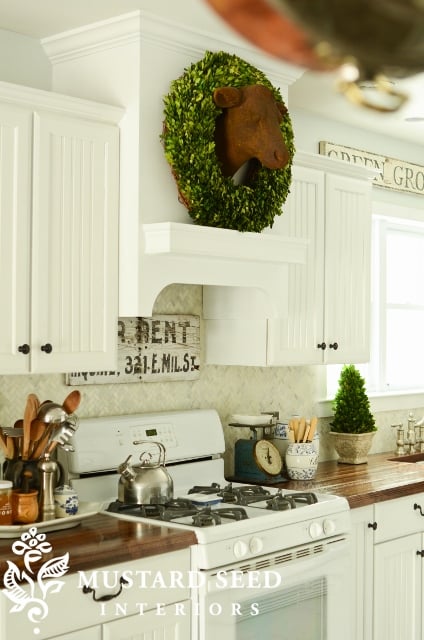 I think I’m going to have a lot of fun decorating the range hood, though.  Sometimes I might put up a platter or tole tray or hang mini-stockings for Christmas or line up some ironstone sugar bowls.  We’ll see.  For now, though, I love the cow head.  Do you think she needs a name?  I’ve decided to name my newest cow Hyacinth.  A reader suggested that and it just stuck in my mind.  So, now I have Eulalie, Adele and Hyacinth.  What shall we call this one?

In other kitchen news, we’re learning how to live with butcher block counters.  So far, they’ve been very durable.  We have gotten a couple of dings and scratches, but that’s going to happen and they don’t look bad.  I do have felt pads on the bottom of things that are regularly on the counters to minimize that…

We did have a mishap with a plastic shopping bag.  My husband set it on the counter, as one would think it would be okay to do, and the bag stuck to the counter and left a mark and some coloring from the graphic on the bag.  We were both pretty bummed, but it wiped up with mineral spirits and you can’t see a thing.  I imagine that won’t happen once the finish has cured for the full 30 days.  Until then…no plastic bags on the counter!

I’m also still working on organizing the kitchen cabinets.  With the new sink, we had to move the trash from the cabinet under the sink.  The pipes prevent the can from going in all the way.  So, I installed a slide-out trashcan holder in the cabinets next to the fridge. 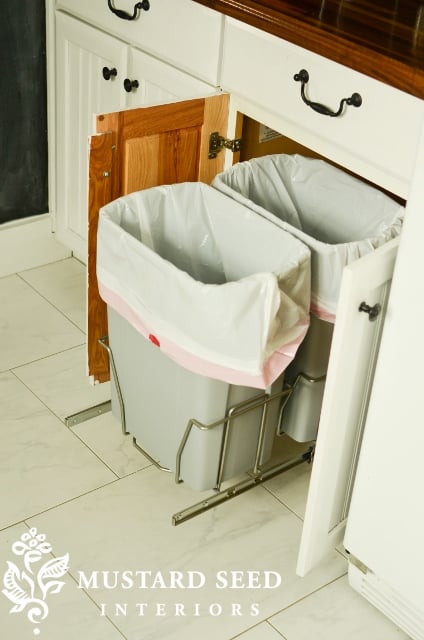 …and with the cow head and wreath moved to the range hood, I have a free chalkboard wall.  I’m going to create some kind of butcher shop inspired chalk art, I think.  Again, I don’t know what it is with the whole cow/meat/butcher thing…  I mean, if you take all of the meat out of an old European butcher shop, it’s a pretty amazing looking place – warm woods, beautiful display cases, a chalkboard filled with products and prices, marble tiles…  Are you following me? 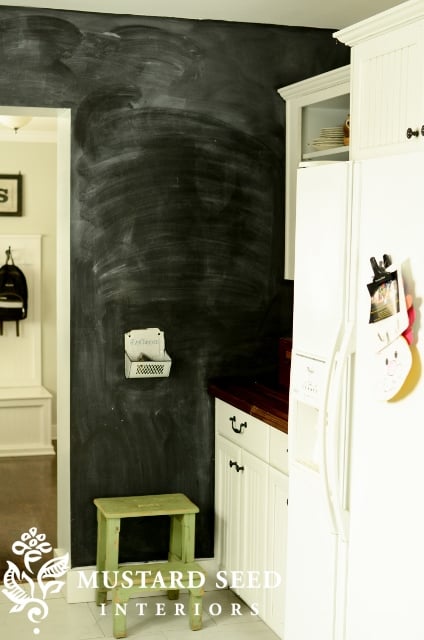 And lastly, I thought I would share another round of freelance projects for HGTV.com that I’ve been working on…  Halloween costumes!  I was really hesitant to take these on, but I found I had agreed to do six of them.  It’s definitely not my forte, but it’s pushed me to be creative in new ways and I’ve had a lot of fun doing it.  I don’t think this will be a regular gig for me, but I’m glad I gave it a try.  Here’s a preview of the feathered wings I made…

They were definitely my favorite and I must admit that I couldn’t help tying them on.  Since I have boys, I had to “borrow” a girl for the tutus and frilly stuff.  My poor four-year-old boy did have to be a fit model for me, though, and his face was a riot when I was trying to tie a tutu on him.  Just a part of being Miss Mustard Seed’s son.  Poor guy.

A parade of furniture, a cow head staring at you while you’re eating a snack and now tutus.