Before I get into today’s post, I wanted to apologize to those who still want to buy hemp sheets, but they are sold out.  I was floored with how quickly my largest order ever was exhausted!  We do have some more from that shipment to list, but the weight is a bit different.  I will give everyone a head’s up before I list them (most likely early next week.)

Also, I will place another order for hemp sheets when my source has them back in stock, so if you would like to be on a “waiting list”, just send an e-mail to marian@missmustardseed.com and let me know how many you would like and you can have first dibs.  They are $110/each.

Now, to today’s decorating dilemma!  I think there are times when someone designs or remodels a space and they have an idea and implement it without really thinking through how it’s going to function.  If you have an awkward space or room layout in your house, you know what I’m talking about.  It’s the thing that throws a whole room off and leaves you scratching your head.  How in the world did someone think this was a good idea?

Such is the case with our design dilemma today.  Susan asked for some help with the twelve shelves above her fireplace.  Here is her e-mail and a picture of the space…

“I have a new house that has 12 (yes, 12) shelves above the fireplace….6 and 6. I would like to send you a picture and get some feedback about what I could put on these shelves. I have a collection of vintage dishes that are collecting dust in my pantry that I have been thinking about. I have put a few of them on a couple of the shelves to get an idea. Yay or nay?” 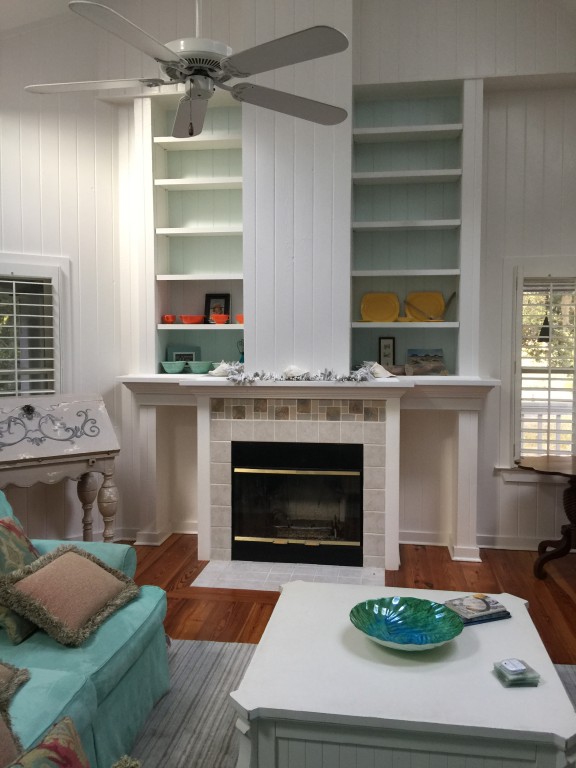 The good news is that the fireplace and shelves look really well done.  Everything looks high quality and I love the wood planking and trim.  The rest of the space appears to be beautifully finished, too, with plantation shutters and wood floors.  So, there are a lot of good things going on here.

What makes it a little awkward and challenging is the long, narrow “wall” above the fireplace and the shelves that go up for days on either side.  The little cubbies flanking the fireplace are a little tricky, too.

So, I’ve given it some thought and this is what I came up with… 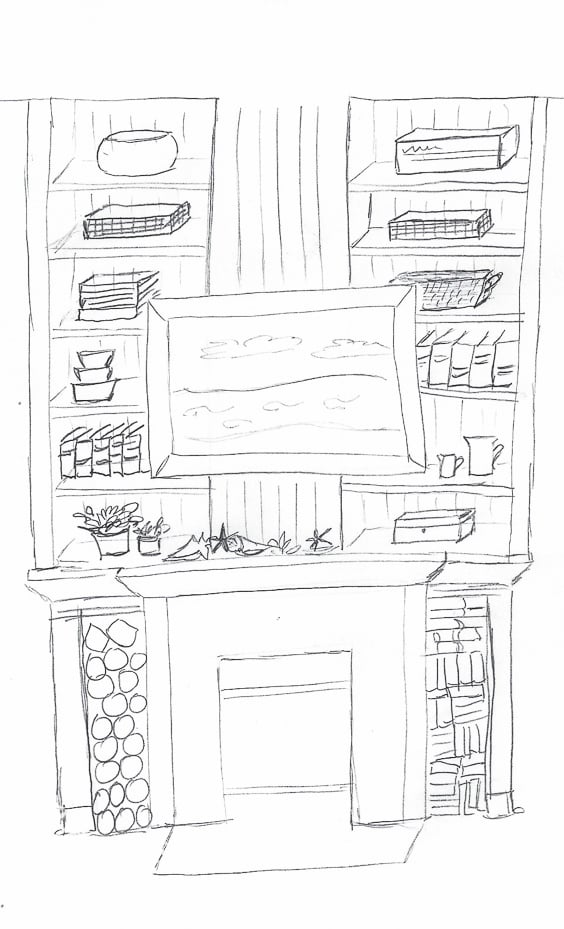 Let’s talk about the cubbies first.  I immediately pictured them filled with neatly cut logs… 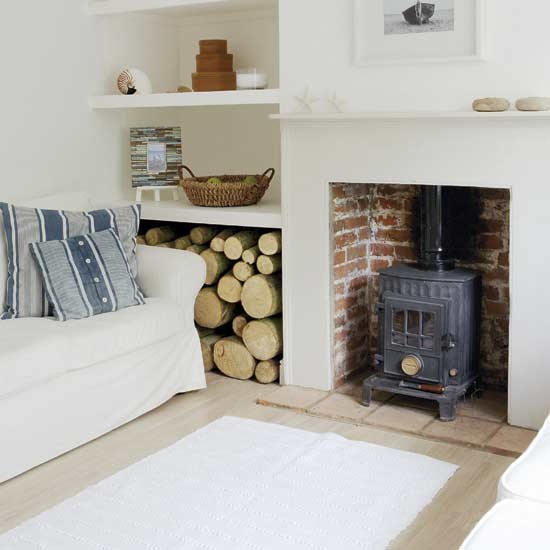 They would just be decorative, but they would make sense of those cubbies.

Another less conventional option is to fill them with books… 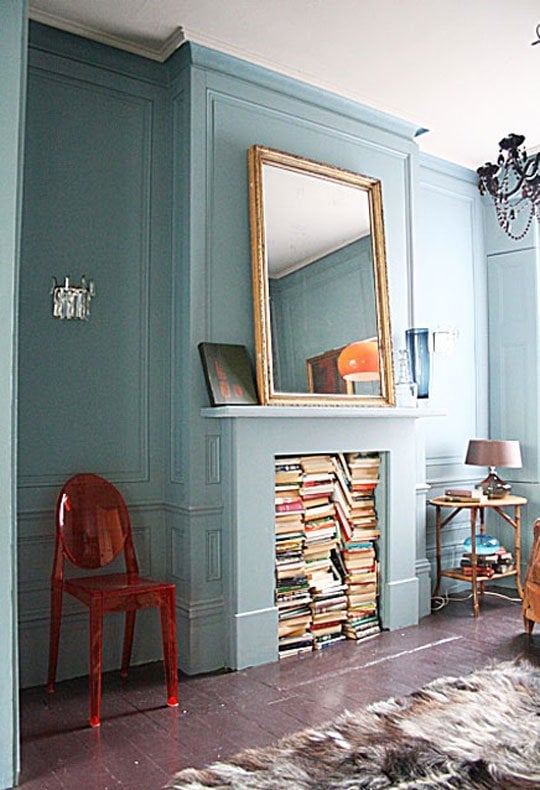 The example in the photo above is perhaps a little messier than I’m thinking, but it’s the right idea.  Stack books tightly in the cubbies, keeping them either all in the same color family or with the pages facing out, so they are all white/cream.  Again, I’m not suggesting this as a functioning library, but as a way to store books that you don’t use, but aren’t ready to get rid of.  Or perhaps a way to decorate the space with some yard sale or thrift store books.

In my sketch, I drew logs on the left and books on the right and I think you could use both of these options or one or the other.

Above the fireplace, I suggest hanging a big piece of artwork.  Yes, allowing it to cover part of the shelves.  Again, this is a little unconventional, but it is a “thing” and “acceptable” among designers.  I think it’s an interesting visual choice, actually.  This is a different room style, but you can see how nice it looks… 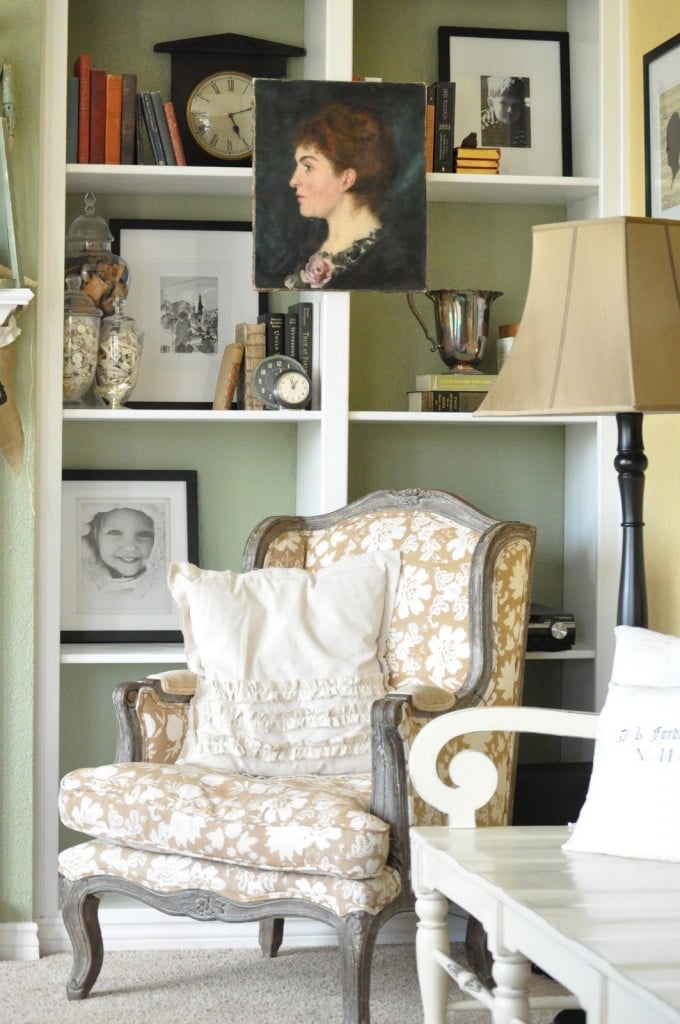 I think a seascape with a pretty turquoise in it would tie in with the sofa and create a real focal point above the fireplace.  It’ll draw your eye to the painting instead of the awkward stretch of wall. 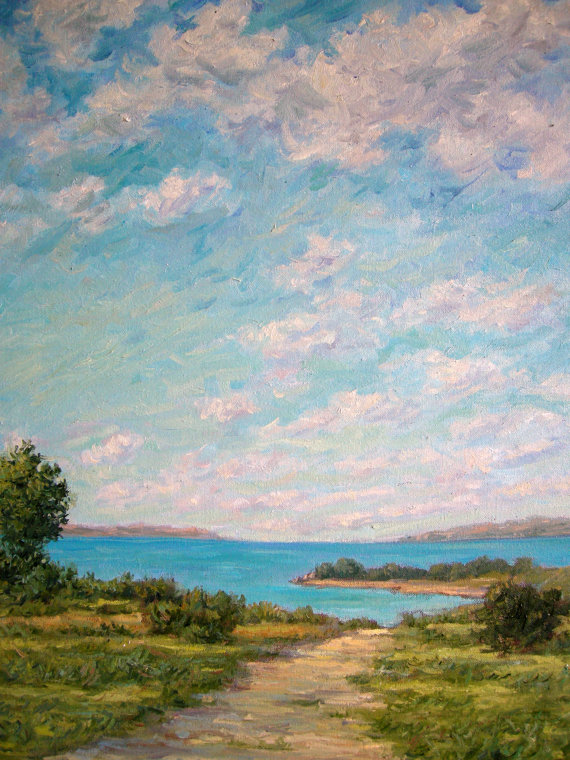 Another thing I would suggest is painting the wall behind the shelves white.  It looks like they are a pale aqua right now (or that may be a shadow), but I think painting them all white would help them blend in a bit better.  Ordinarily, I like the back of shelves painted a color, but I think in this case, it just draws attention to their awkward layout.

I would fill the shelves with a mix of textures, natural elements, pieces to add texture like woven baskets and a few pops of color.  I think the colors of the vintage dishes are fun and they would be nice scattered throughout the shelves, but with twelve shelves, they need to be mixed with some other things. 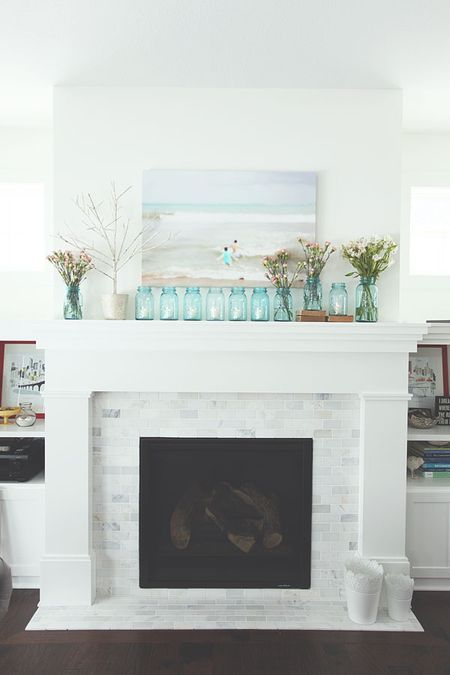 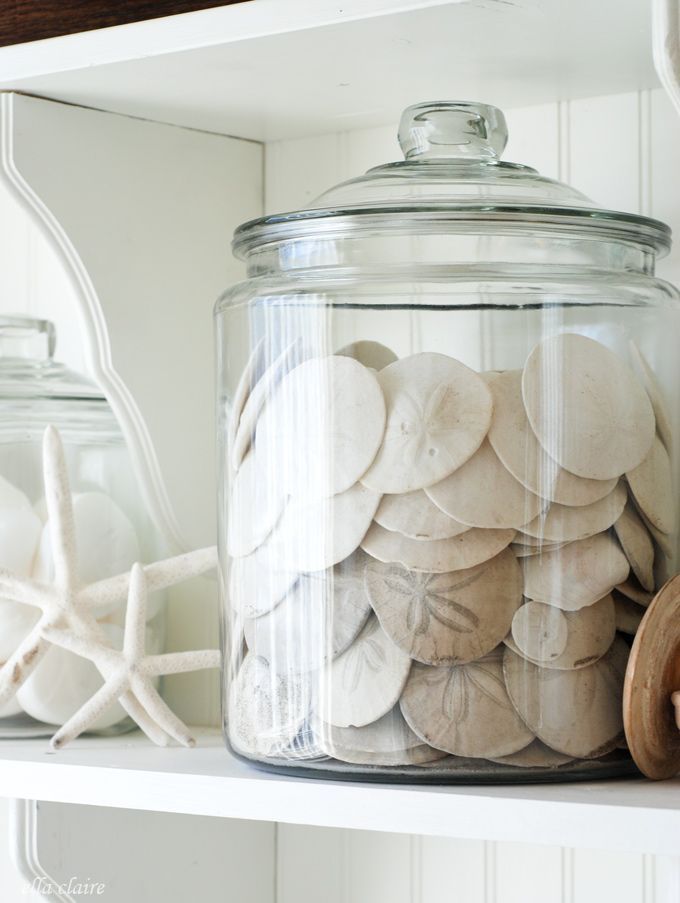 …and I like this mixture of books, creamware and shells. 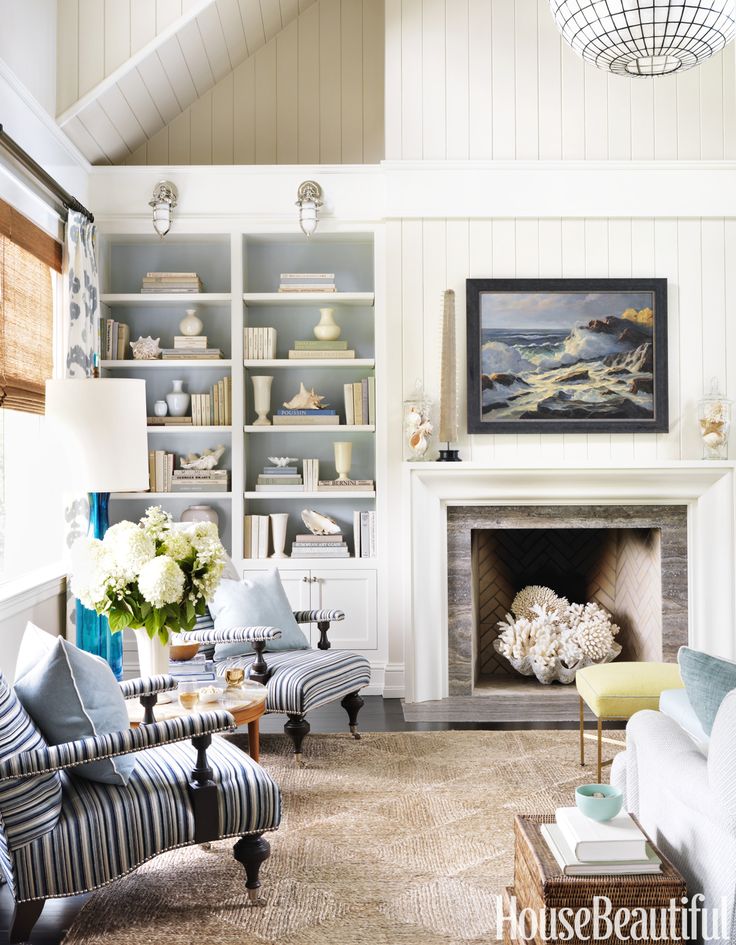 Since Susan has so many shelves, I would also suggest adding a few larger items to fill up a few of them.  Baskets are a great option, because they can be budget-friendly, they add great texture and can be used for extra storage, if needed. 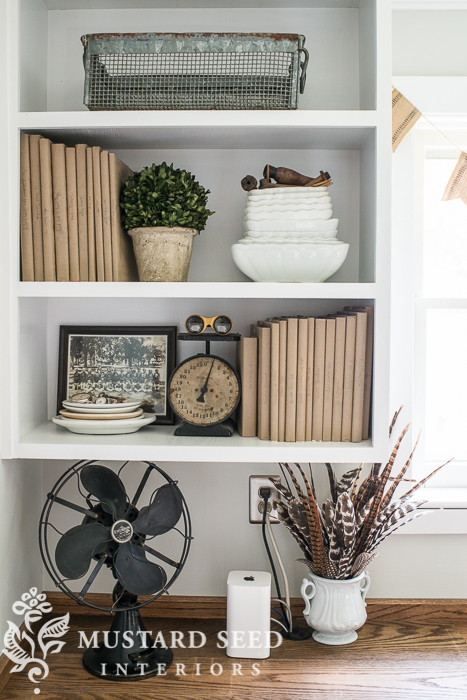 I would also mix in a few low-maintenance or even artificial/preserved plants to add a touch of greenery.  Succulents would be a nice option and would fit well with the coastal feel of the room. 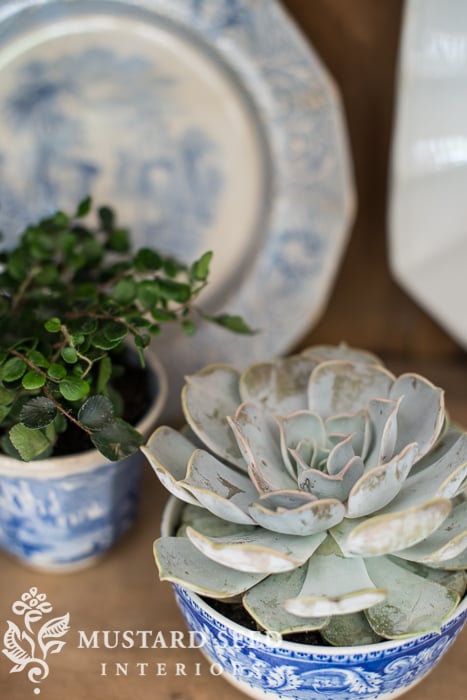 Susan, I hope you’re inspired AND that you share with us what you end up doing to the space.  Obviously, take whatever ideas work for you and follow wherever that leads.  I know sometimes I just need a fresh set of eyes to get my creative juices going.  I think your space has a ton of potential and won’t take much to be fantastic.

Thanks for sharing your space!