tips I learned from the pros stripping wallpaper

I told you I would only write a couple more posts about stripping wallpaper, so let’s just get one out of the way.  This post is prompted by the people asking if I snooped and picked up some tips from the pros who were stripping off our wallpaper and glue.

The bad news is that they didn’t have some magic product or technique that made the paper and glue magically fall off.  It was still messy, laborious, tedious, and challenging just as it has been for me and every other human who has had the misfortune of having to strip wallpaper.  There is just no way around it.  I did pick up a few things, though, that I thought I would pass on.

If you missed it, you can read how my mom and I removed the wallpaper glue in the primary bedroom HERE.  We’ve since been using a steamer and find that works well. Both methods are about wetting the glue so it can be scraped and/or scrubbed off.

In the rooms where the glue was dry, meaning the paper just peeled off leaving the dry glue on the wall, they used an orbital palm sander to remove the glue. Several of my blog readers used this method and I was tempted to try it, but I really didn’t want to kick up that much dust.  An entire crew, though, could pretty quickly seal off a room and knock it all out.  I would just caution you, especially if the wallpaper is on the older side, that the glue could potentially contain hazardous materials like arsenic, lead, mercury, cadmium, and asbestos.  Sanding the glue and sending the particles airborne can be dangerous. 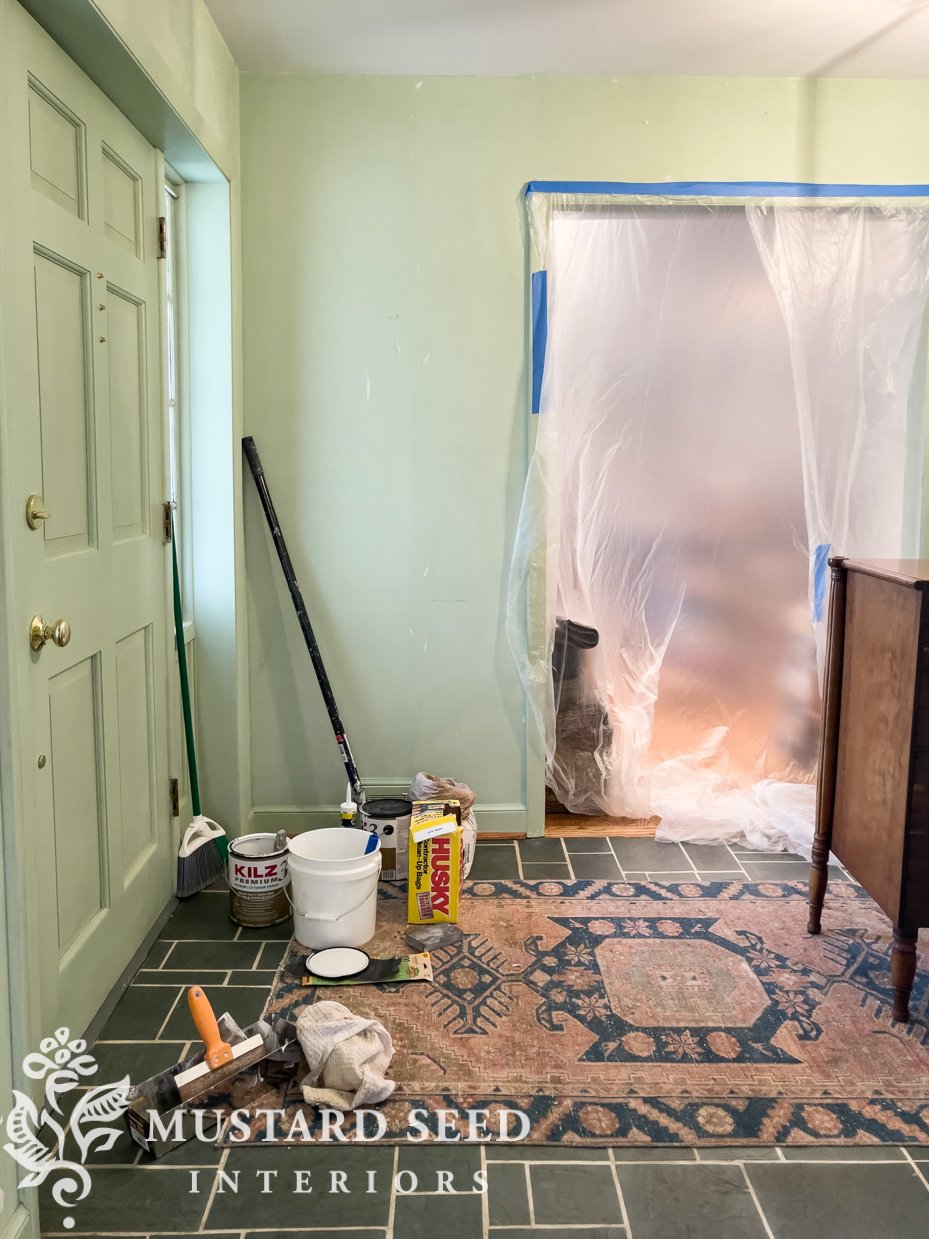 For the paper in Marshall’s room, which didn’t peel off easily, they used spray bottles filled with warm water.  As far as I could tell, they were just using warm water and then scraped off the saturated paper with a putty knife.  The trick to this room seemed to be numbers and experience.  Since they’d stripped a lot of wallpaper, they were all pretty efficient and three of them concentrated their efforts on this one room until it was done. 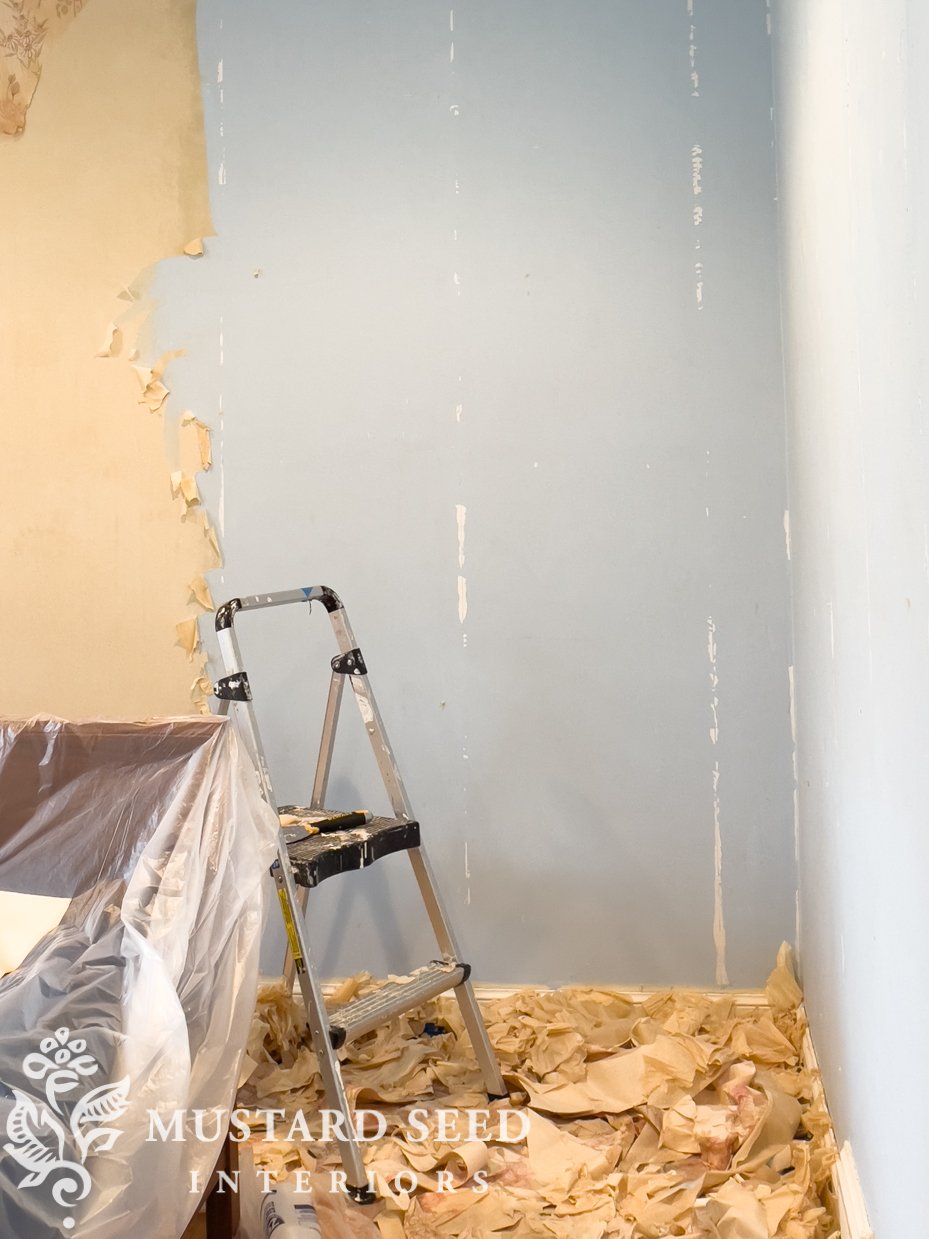 While they did do a good job, there were still some remnants of wallpaper glue remaining and, to address that, they used a quality primer.  This was the same approach I took when I stripped the wallpaper in our primary bedroom.  We scrubbed and scrubbed but we couldn’t get every bit of glue, so we finally put on a coat of quality primer meant for challenging surfaces and that did the trick.  Remove all of the glue you can, but a good primer will take care of the rest.

I used Cover Stain Primer and that did an excellent job.  I peeked at their cans and they were using Kilz Premium and it seemed to accomplish the same thing.  Both are a high-hiding primer meant to stick and cover surfaces that might otherwise resist paint or have bleed through.  I have yet to paint over their primed surfaces, yet, but I’ll let you know if one performs better than the other.  You know I’m a paint nerd, so I love those kinds of experiments.

I would make two suggestions as far as the primer coat is concerned.  1. ) Allow the walls to completely dry before putting on the primer.  I know it’s exciting to get a fresh coat onto the walls, but it’s best to wait so you don’t cause more problems by putting the primer on damp drywall or plaster.  2.)  Allow the primer to dry/cure for a few days.  I noticed with both of the primers that the surface felt a little tacky for about 24 hours.  I would let the primer sit for 24-48 hours before applying paint to give it a chance to harden a bit more.  Primer is more effective when you let it cure for a while in most cases.

Since I am putting color on all of these walls, I am going to prime the walls one more time with a tinted primer.  This will reduce the number of coats and provide one more layer of insurance over the walls that have been stripped, scrubbed, patched, and sanded.  It’s one more layer to add to the walls of an already long process, but it’ll serve you well when you get to that final coat of beautiful, fresh paint.

So, I’m heading to the paint store to have some primer tinted and I’m getting the paint for Marshall’s room.  I’m getting most of my paint in the Farrow & Ball brand from Dreamy Whites, but Marshall wants the same color he had in his MN room, which was Newburyport Blue by Benjamin Moore.  We don’t have a Benjamin Moore dealer in our area, so I’ll get the color matched.