I know that many of you come to my blog for furniture makeovers, tutorials, antique finds, and home decorating inspiration, but I couldn’t take a piece of furniture or my sewing machine with me on the plane to China!  What I could take, though, was my sketch book.

I was painting a portrait a couple of weeks before I went on my trip and the thought occurred to me that time completely slips away when I’m engrossed in a sketch or painting.  Well, that sounds like a perfect activity to bring on a 14 hours flight – just the kind of place you want time to run away from you.

So, I brought along my sketch pad and some inspiration pictures to work off of.  I actually got overly ambitious and even brought watercolors, but I never had the chance to pull those out.

I had an “art afternoon” with Katie before I left and she brought along a book of Rembrandt sketches to use as a reference for studies.  I made a few photo copies of ones I liked and that’s where I started.  I had never tried to sketch off of someone else’s sketches, but it was such a great exercise.  I learned a lot just in copying the direction of his pencil strokes and the values he used to create depth.  (I know I misspelled his name in the sketchbook!) 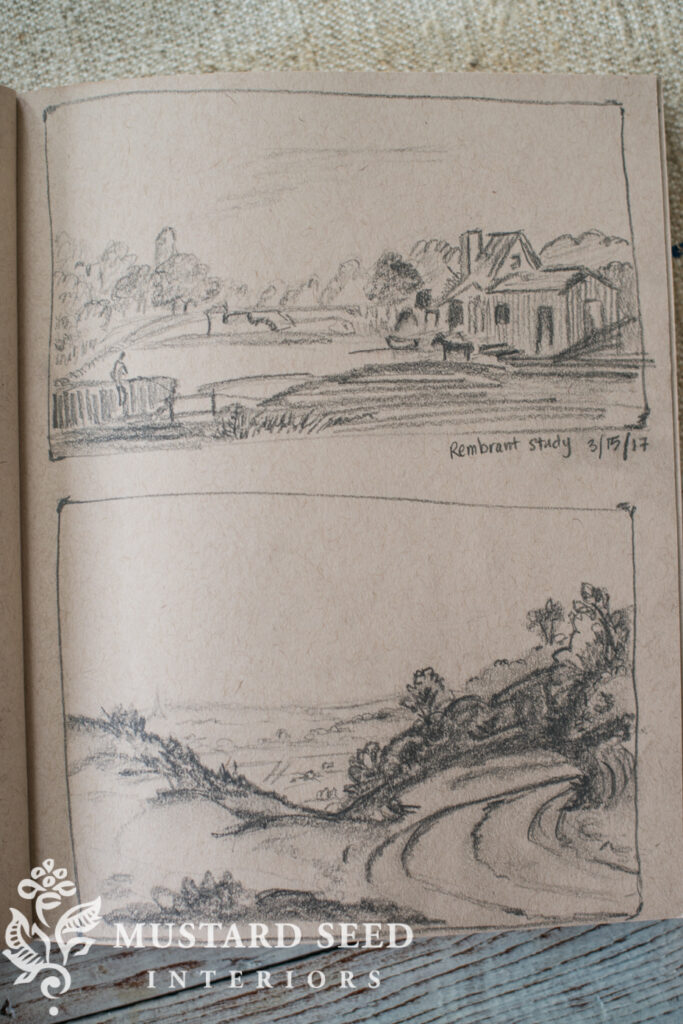 Those were pretty quick sketches, so I moved on to a portrait, since those take me a bit longer. 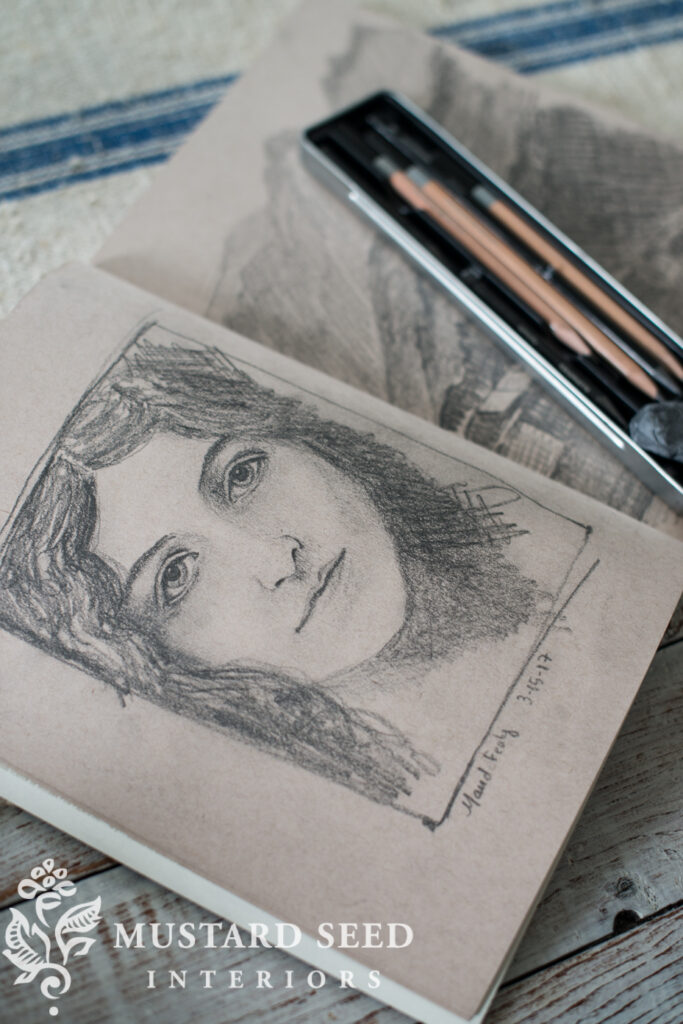 This one was off of an old sepia-toned photo of Maud Fealy. 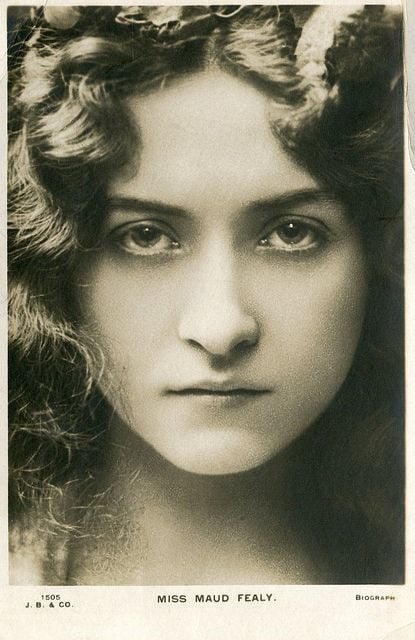 My Maud looks a little happier than the actual Maud, but I’m generally happy with how it turned out, especially since I was sketching on a tray table under a single reading light! 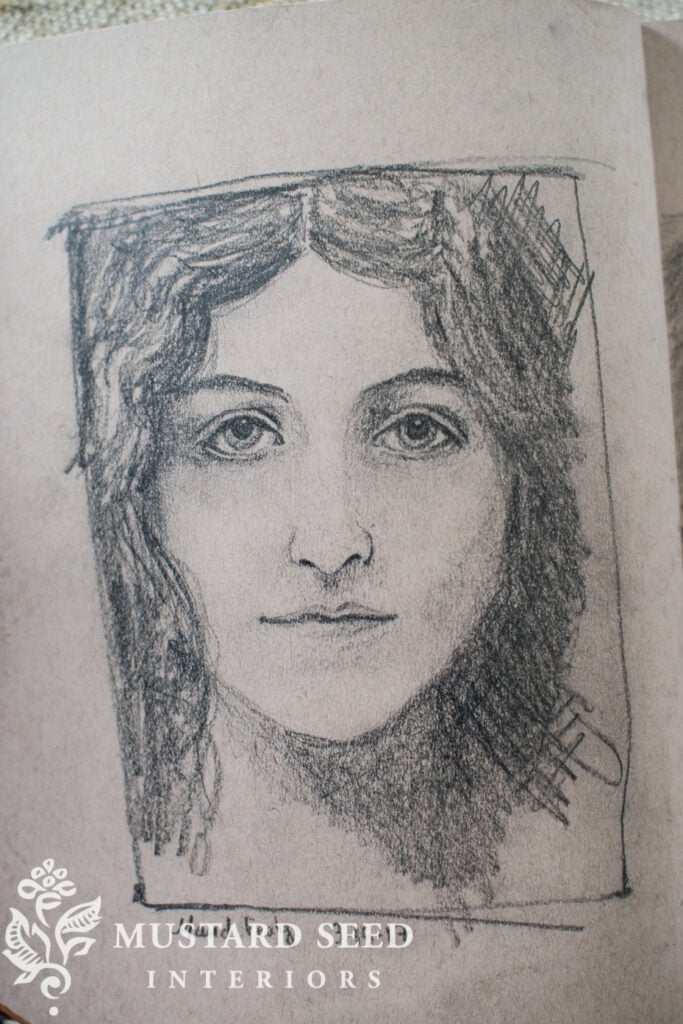 I also took some time to sketch while I was at the Great Wall.  I honestly felt a little eccentric and was self-conscious as people kept looking over my shoulder.  I had it in my head that I wanted to sketch while I was there, though, and I had traveled 14 hours to get there, so I wasn’t going to NOT do it just because I felt a little silly about it. 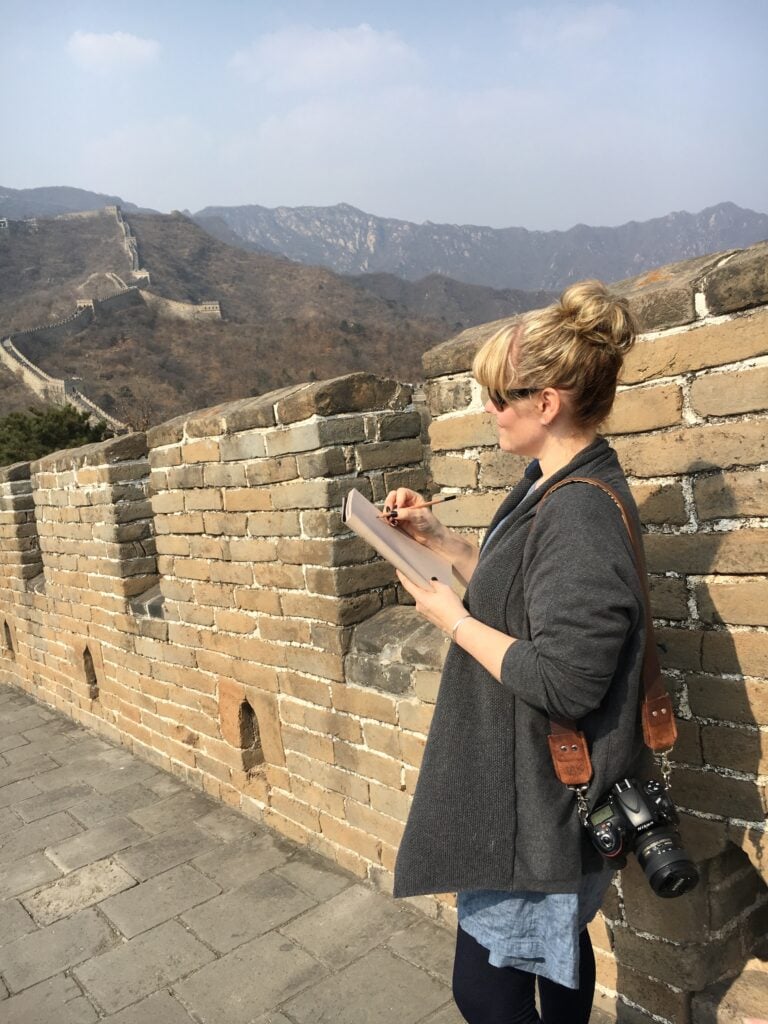 I didn’t sketch anything remarkable, but I tried to capture the shapes and values that I saw and I finished it up on the plane on the way home. 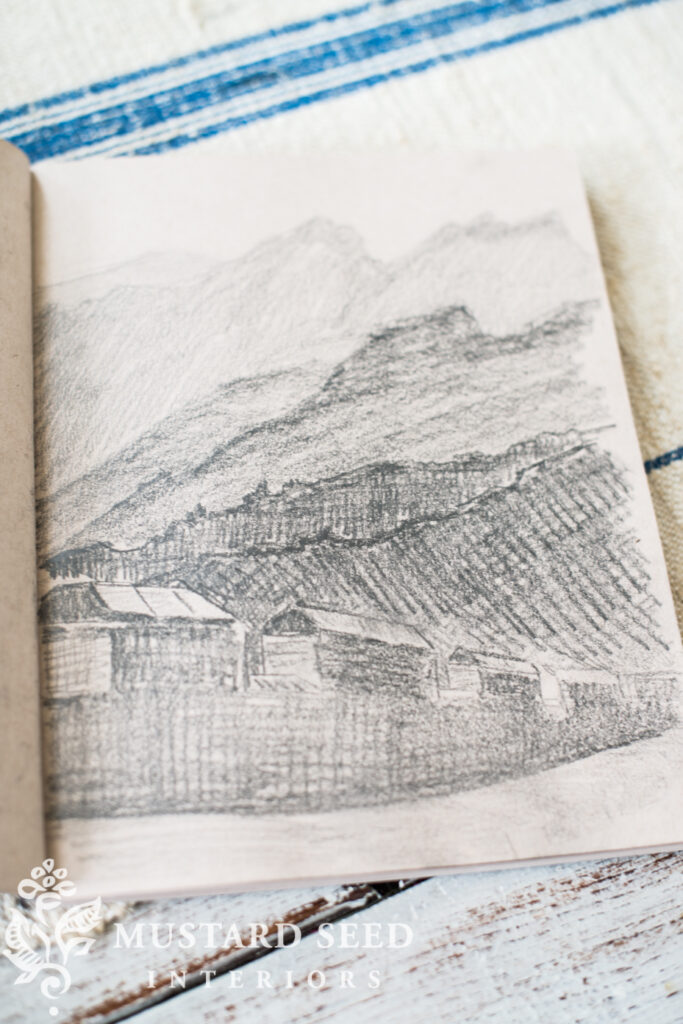 The mountains just behind the wall ended up getting a little darker than I intended.  The shadowed side of the wall should be darker, but I know that for the next sketch I do.

Here was the section I was sketching… 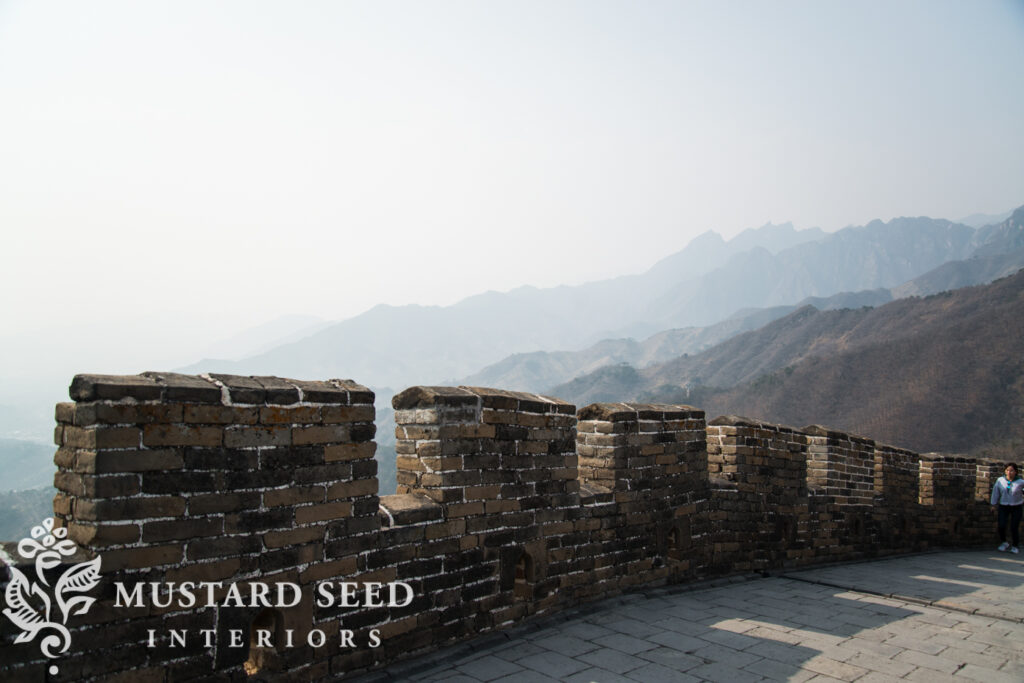 And I sketched another portrait on the plane home as well, this one of a child. 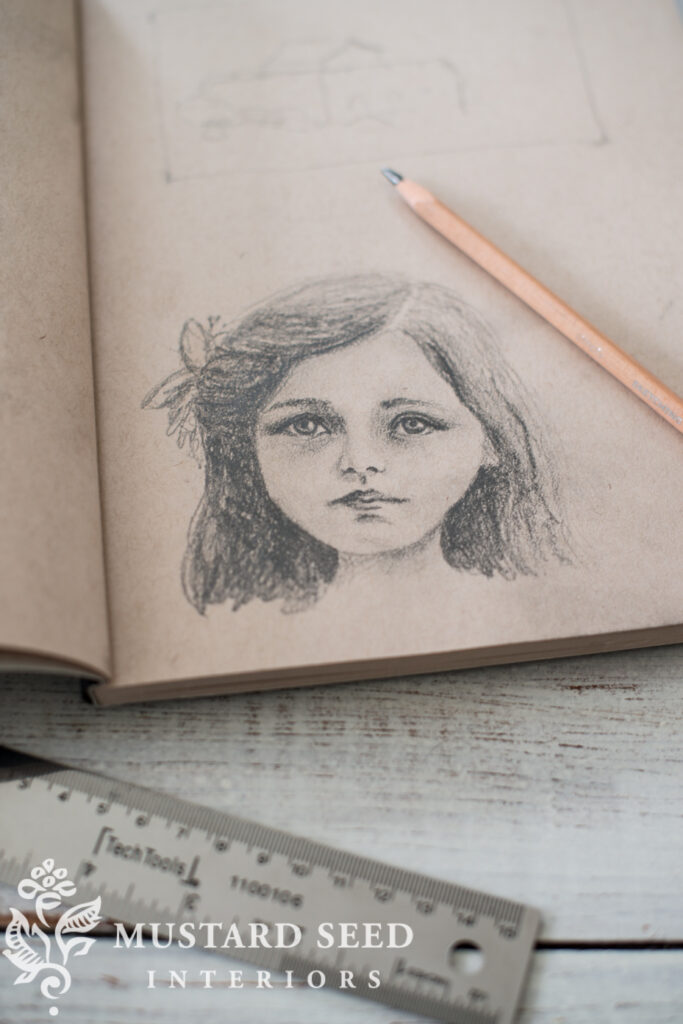 The right eye (our right, her left) is a little off, but I erased it and redrew it so many times that I finally just let it be a little off!  Sometimes you just need to finish something and then try it again. 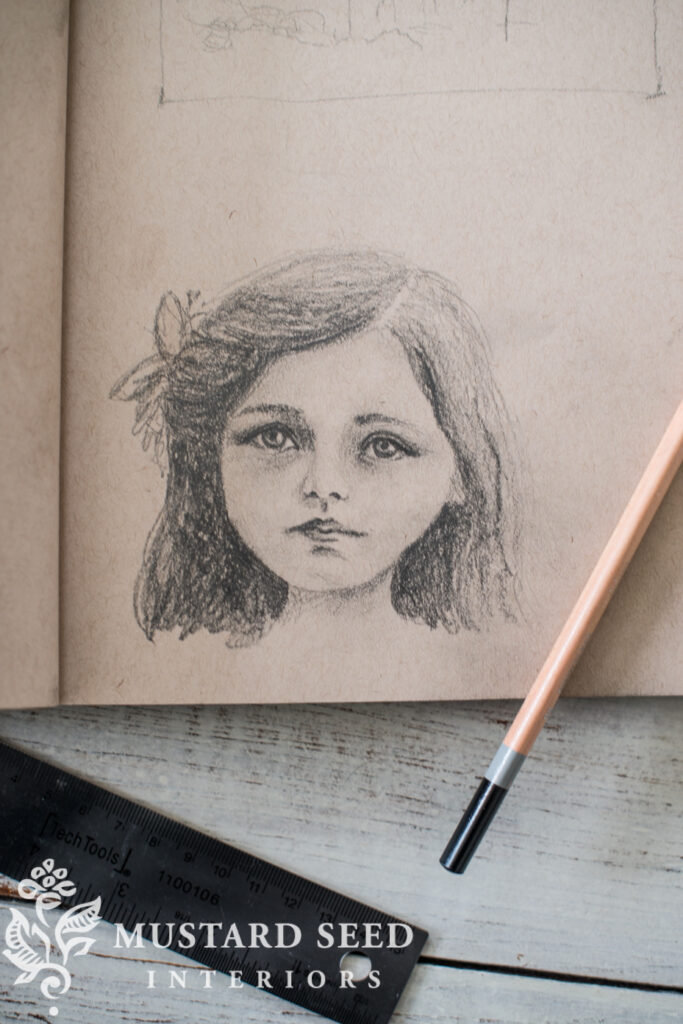 I am playing catch-up this week, but I am hoping to squeeze in some time to do some sketching and painting.  It has become my therapy!

I had to take Calvin to an endocrinology appointment today, but I’ll be back in the studio tomorrow and slowly, but surely, we’re making some progress on pieces for Lucketts…

the by-product of a beautiful environment