My boys were really little when I started my business, both in diapers, in fact.  As a stay-at-home mom and new entrepreneur, one of the things I enjoyed most was getting out of the house and going to Hobby Lobby.  I would just meander, usually pushing one cart and pulling another (one kid in each cart or two kids in one cart and the other cart for purchases.)  I know it was a spectacle, but I had to find a way to make it all work.

It was that point when my boys began disliking Hobby Lobby.  Even before they could read, they could recognize those capital orange letters.

So, we’ve made a joke out of it.  Every time we drive by, I’ll ask if I can stop in there for about an hour to look around and they’ll throw their heads back and sigh out a big, “Nooooooo!”

Well, I tried this old routine on them when I picked them up from school a couple of weeks ago.  Marshall played his part perfectly, but Calvin surprised me.  “Yes!!  Can we please go?  I want to look at art supplies!”

I looked through the rearview mirror at him with a quizzical expression.  “You really want to go?”  He begged me to go.  Now, I wasn’t prepared for that and with homework to do and dinner to make, we really didn’t have time.  Calvin also didn’t have any idea of what he needed.  He just wanted some art supplies.

I told him we could go another time, because mommy loves art supplies, too.  He was disappointed, so I suggest we take an inventory of what he has and we can figure out what he still needs.  I also told him I could give him some of the student watercolors I was using when I started, since I’ve switched to professional watercolors now.  These student ones are so much better than the “kids watercolors” he was using.  We actually made some color wheels together and I ended up with all of these beautiful shades and he ended up with mud.  He looked at his wheel in disappointment and said the green looked like “garbage green” and he was right.

So, I gave him the Windsor Newton student set I used for a few months.  And he wanted all of the loose tubes of student colors to fill the empty half-pans in the palette to make sure he had all of his colors.  And then he noticed my travel brushes and my watercolor journal and my miniature ruler and he wanted all of those things, too!

I had to draw the line somewhere, because an eight year old really only needs so many art supplies, but I did give him supplies that I didn’t use or need and I told him we could buy a few new things, like a watercolor journal. 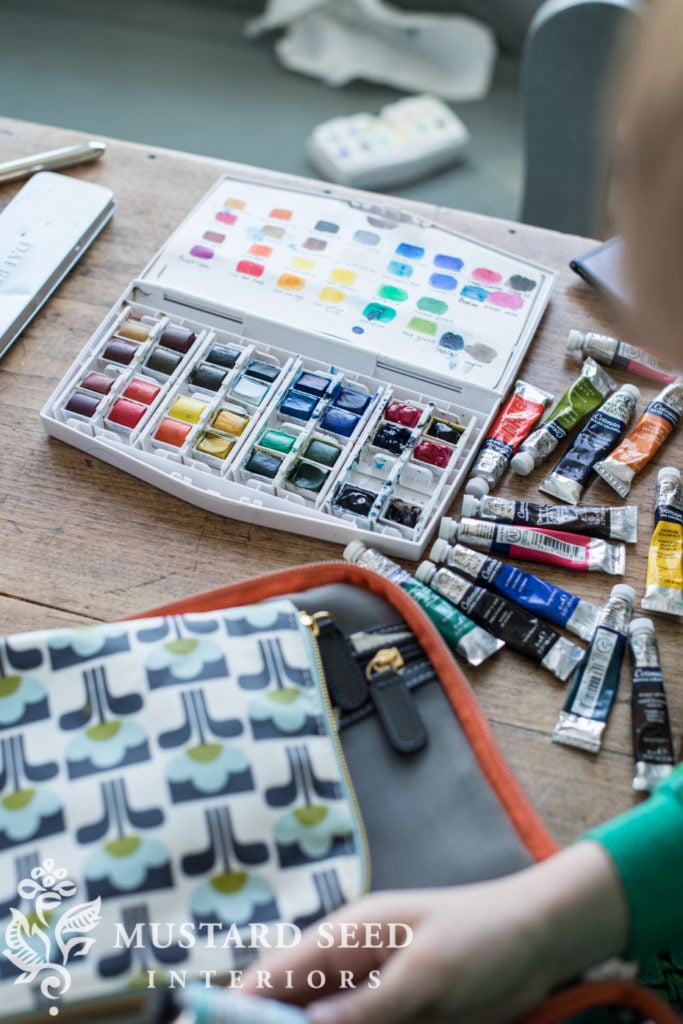 It’s been so special.  We’ve been painting watercolors together most days and he even “took” a cloud study class with me.   His attention span is a little short, which is to be expected, but then he went on to paint a landscape while I worked on more clouds. 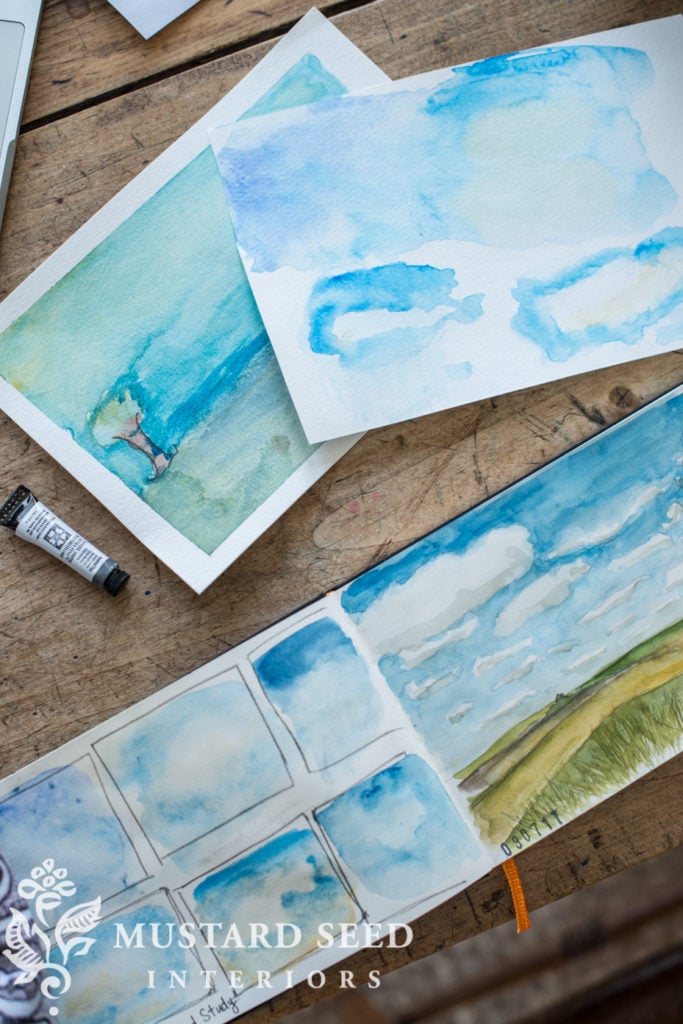 He’s been so excited about it that he carries his art bag with him to school on Mondays, when they have art, so he can use his own supplies. 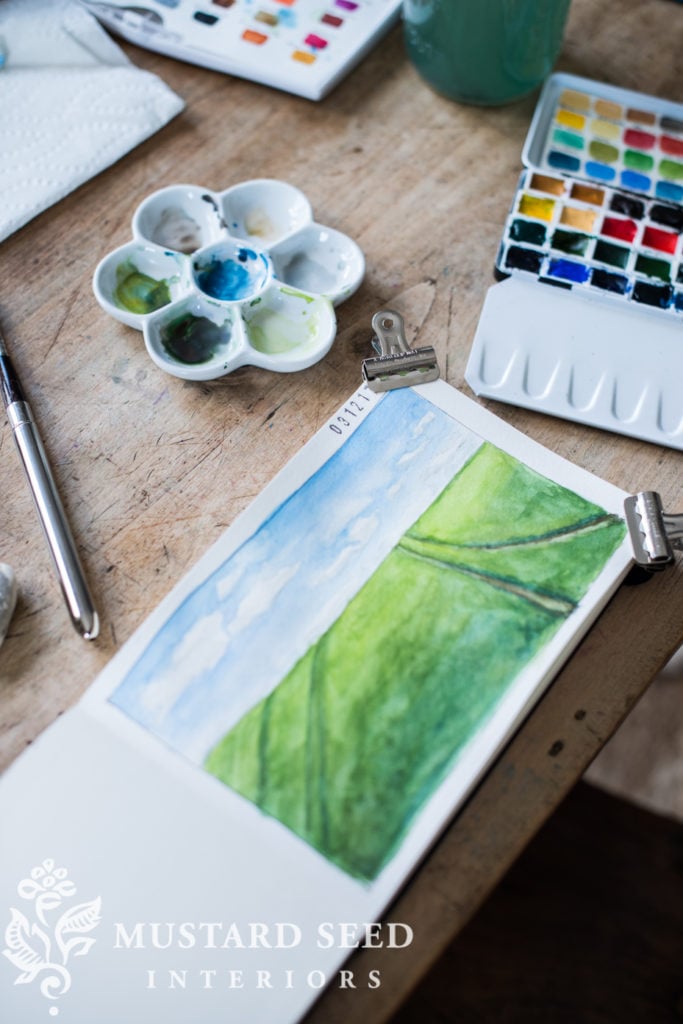 I tend to be someone who likes to dive right into “the good stuff” in a project as well, but I’m learning through these classes that there is so much value in all of these exercises.  I have a long way to go, but I do see improvement. 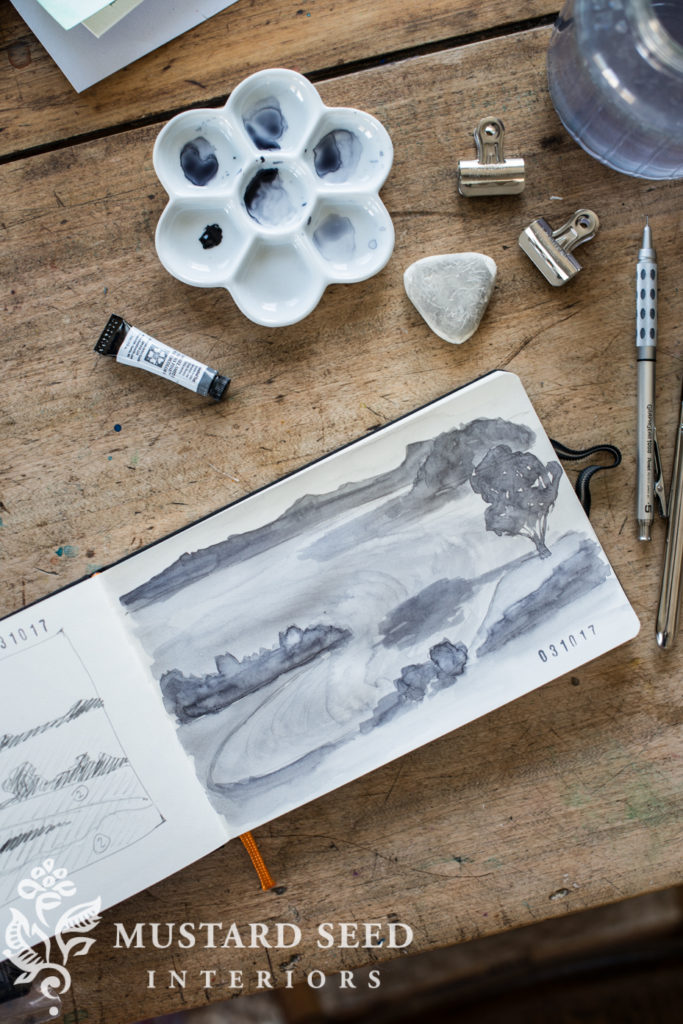 And I see improvement in Calvin’s work, too.  He took his watercolors to my mom’s house when she was watching them for a couple of hours to give Jeff and I a chance to grab a nice dinner for our anniversary (it’s been 18 years!) and the landscape he painted was good!  The sky was darker on one side and lighter on the other, so it looked like a storm was moving in.

With having two boys, there is a lot of rough and tumble, but I love that we can have these quieter moments together, too, when we can bond over a hobby we have in common. 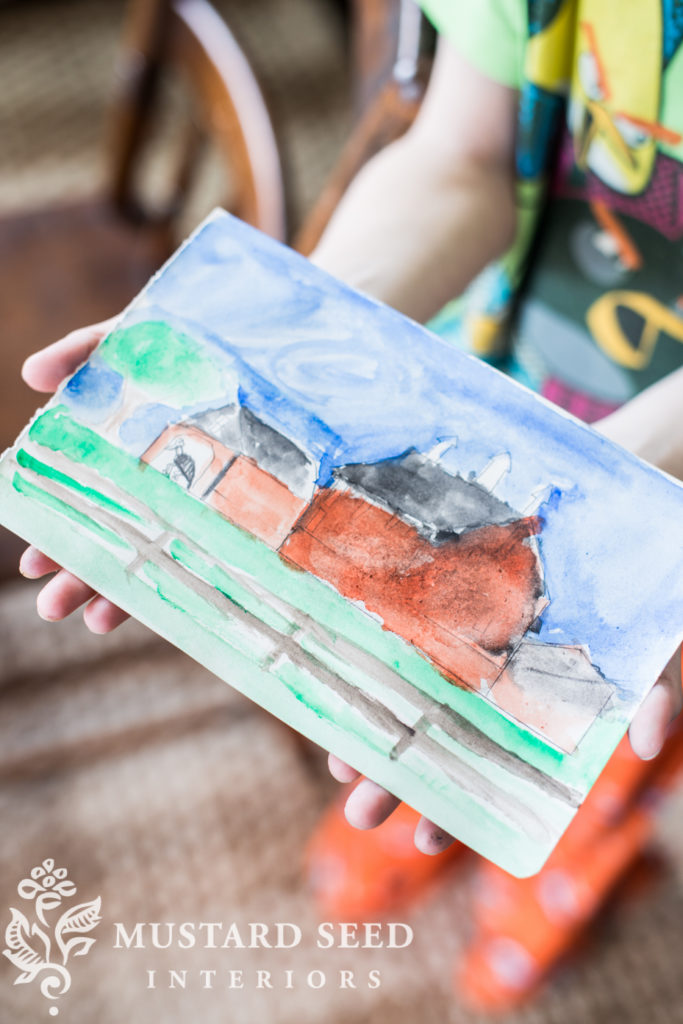 (Jeff said he really liked the velociraptor in the barn, but I told him to keep his commentary to himself.)