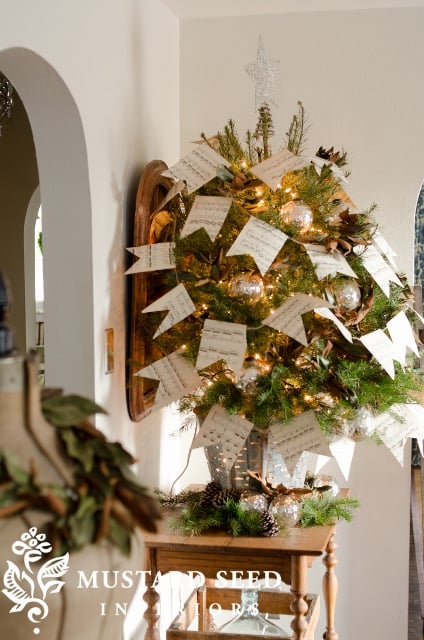 I’ll admit it.  I was a bit of a loaf yesterday.  I would try to get some work done, but I would end up standing in a room, staring around blankly.  I finally surrendered to the fact that I was tired and just needed to chill.  I watched some TV, worked on e-mails and just let the rest of the Christmas decorating and house cleaning wait.  Today, I was ready to check some more things off the list.

Instead of putting up two full-sized trees (like I have the past couple of years…sometimes twice), I decided to do the full-sized tree in the family room and a table-top tree in the living room.  I’d get the exact same feeling, but with less work (and less expense.)

The pickings were slim for little trees at the tree farm.  They were all a bit more plump than I wanted, but I just went with it.  It ended up being just the right size. 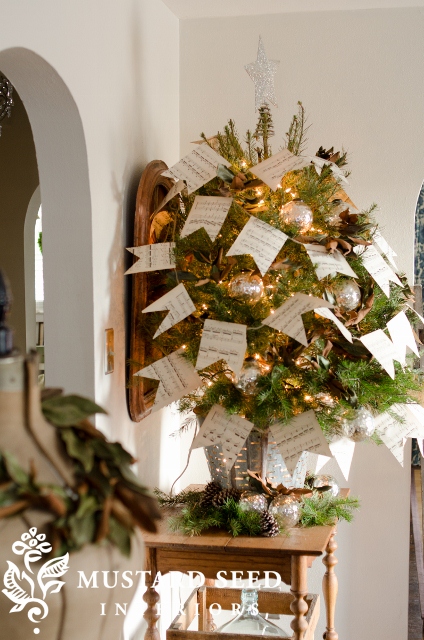 I kept the decorations simple…dried magnolia from my in-law’s tree, sheet music bunting, white lights and some mercury glass balls. 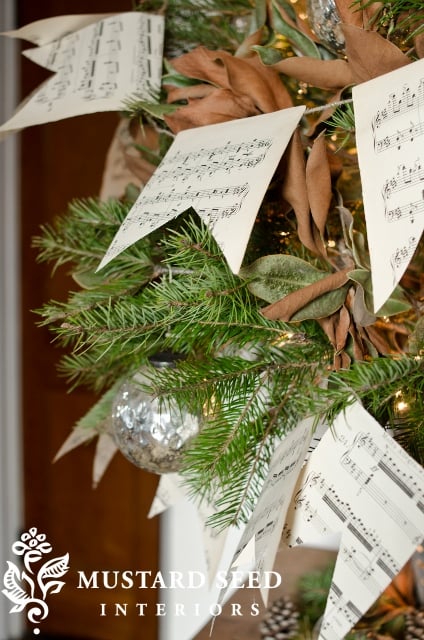 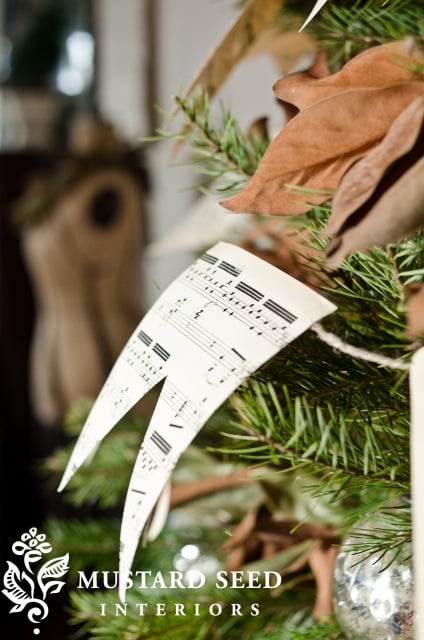 I am in love with the olive basket used to hold the tree.  I used a smaller galvanized pail on the inside to hold the water.  Four bricks standing on end hold the trunk up.  I have to admit that I was pretty proud when I thought of the brick idea.  I really wasn’t sure how to hold the tree upright and I had one of those decorating strokes of resourcefulness hit me.  It held the tree in place and it’s perfectly straight and secure.

I put lights between the two buckets and it looks really pretty when they shine through the holes in the olive basket.

An inexpensive metal star that I glittered last year tops it off.  I couldn’t get the star totally straight, but it looked sort of cute sitting at a slight angle.   My husband was pointing out that it’s crooked and I said I didn’t mind and thought it was kinda cute.  “Well, if it’s good enough for Miss Mustard Seed, it’s good enough for our house.”  I have a full blown alter-ego now that we’re talking about “her” in the third person. 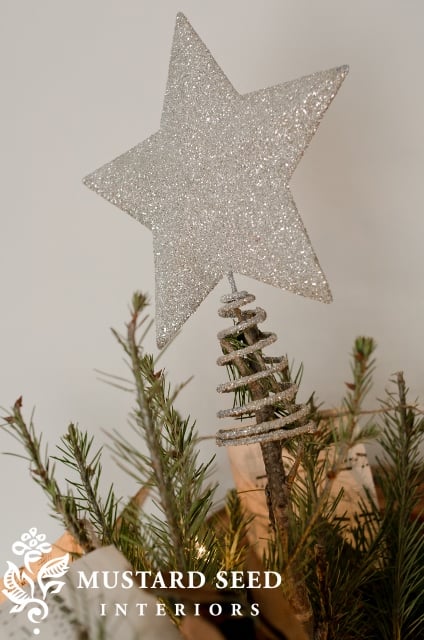 I also thought I would slip a couple of holiday tips into this post.  For starters, I have grown a great fondness for fresh greenery and like to tuck it here and there when decorating for Christmas. 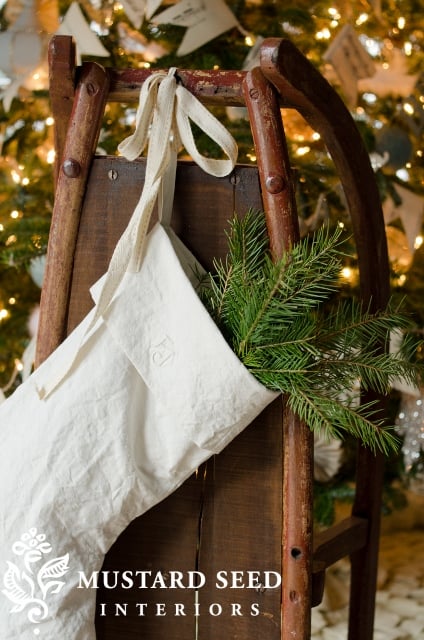 Some varieties will survive quite a while cut and won’t shed too many needles even as they dry.  Others will dry to a crisp and sprinkle needles all over the house.  For the former, I just clip them and tuck them in as is.  For the latter, I wet a paper towel, wrap it around the base of the stem and tuck the entire thing into a small baggie. 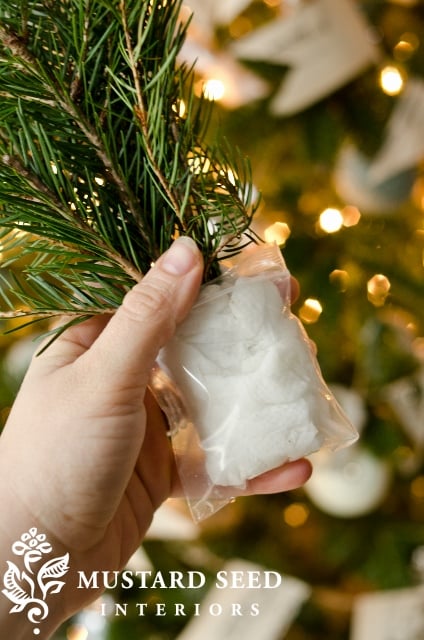 It’s a very simple way to extend those fresh greens.

One last little tip for your photography of your holiday decorations…  Everything looks better in pictures when there are tree lights in the back ground.  It screams “holiday” and sets the mood instantly. 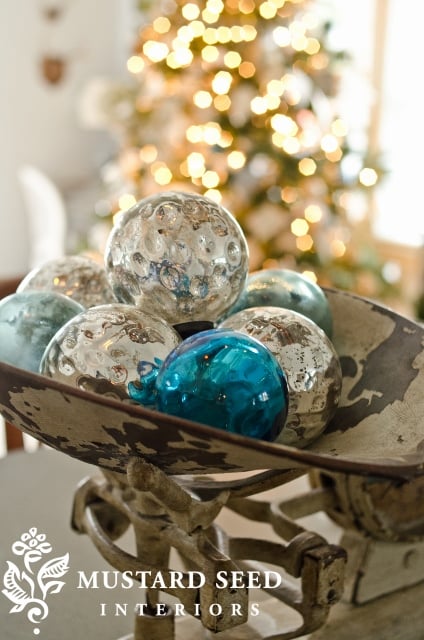 You don’t have to get technical or super fancy with lenses.  Either set your f-stop to a low number or, if the term f-stop is totally foreign to you, set your camera to the closeup setting.  Usually that’s a flower icon on the dial.  Set what you want to take a picture of a few feet in front of your tree and get nice and close to it.  Focus the camera on the object and snap away.  Make sure the exposure is reading the object you’re shooting, not the lights.  It’s best to have a light source on the object as well (like a window) so it’s not just back lit by the tree.  Try it out! 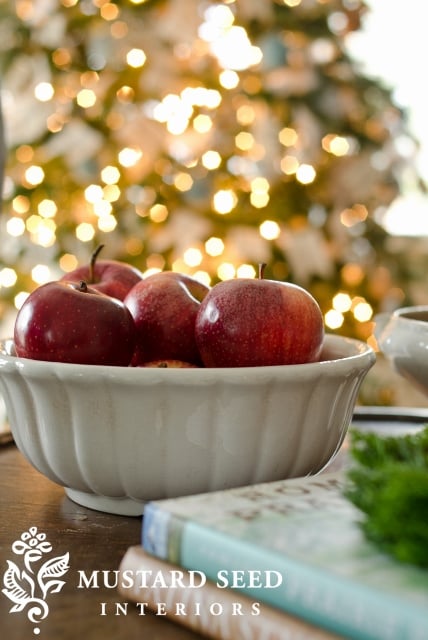 Apples and candy canes.  You can’t get much simpler than that! 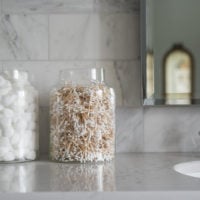 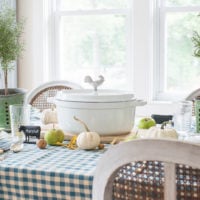 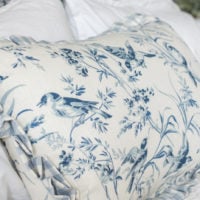