My brother called the other day and asked how I was doing after “the post.”  I knew exactly which post he was referring to and you probably do, too.  “I’m really fine!  99% of the comments were constructive and they helped me think through what’s next.”

My brother pointed out that it’s time for the next.  “You have been telling a story, as you’ve been working on your home over the years.  Now that your home is pretty much done, that story is coming to an end.  It’s time for a new story, now.”  It was one of those times when someone says something simple, matter-of-fact, but profound.

I love the way he phrased that.  It’s not that I’ll never talk about my house again.  There are still finishing touches and you know I can’t help but rearrange some furniture!  But it’s time for some new stories.

I felt a bubble of excitement at all of the new stories I could tell.  And we’re starting one of those new stories today…a story about Megan and her office/studio.

You may remember Megan.  She attended my BYOF (bring your own furniture) milk paint workshop and then came to the studio several times to help us out as we were preparing for Lucketts.  (This is one of the pieces she and my mom worked on…) 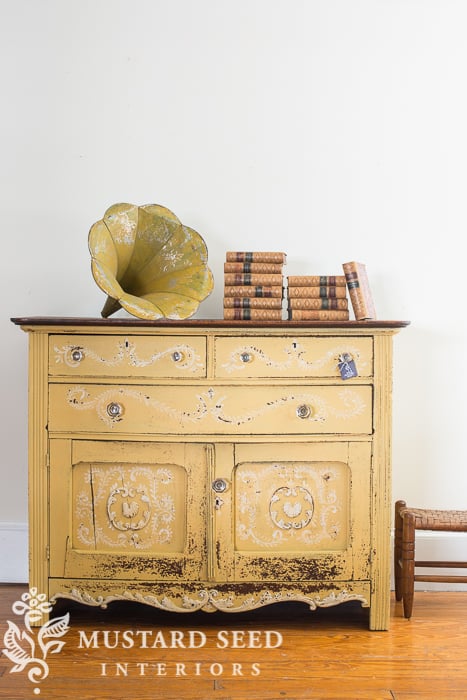 We ate our packed lunches, listened to “whiney girl music”, as my dad calls it, crawled around on the floor in paint splattered sweats and did a lot of chatting.  Chatting about business, blogs and family.  When I mentioned that I was considering working with design clients, she volunteered to be my guinea pig.

A few weeks ago, I was ready to start looking at some spaces, I asked Megan to send some pictures of her house, specifically the room she would like us to work on.  Megan sent us pictures of her master bedroom.  As Kriste and I reviewed the photos, we talked about some things we could do, but the room looks really nice as it is.  We decided to check things out in person to get a feel for Megan’s style, what she has to work with and what she hopes for the space.

Last week, Kriste and I paid a visit to Megan’s house.  She gave us a tour through each room, starting with the living room, her favorite.  As we got to the end of the first story, Megan sheepishly motioned to a pair of French doors that were closed, a curtain drawn behind the door.  “Showing you this room is like that nightmare when you show up to middle school in your underwear.”

It was her office/studio and creative space.  The space is small, but a workhorse.  I made a mental note of what an improvement we could make in that space and we continued to tour the house.  Once we reviewed all of the spaces that were makeover potentials, my mind kept wandering to the office…a space for Megan to create.  I know, for me, that would be the biggest gift.  When I suggested that to Megan, her eyes lit up and we started talking about how she uses the space, her needs and her wish-list.

Here’s how it looked when we toured the room.  (Keep in mind that the rest of her house was spotless and this was the room everything was tossed into to clean before we arrived!  And, here it is on my blog.  You’re welcome, Megan.) 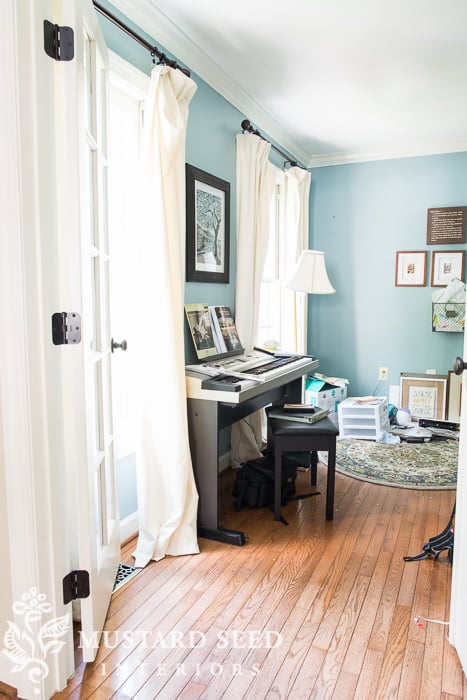 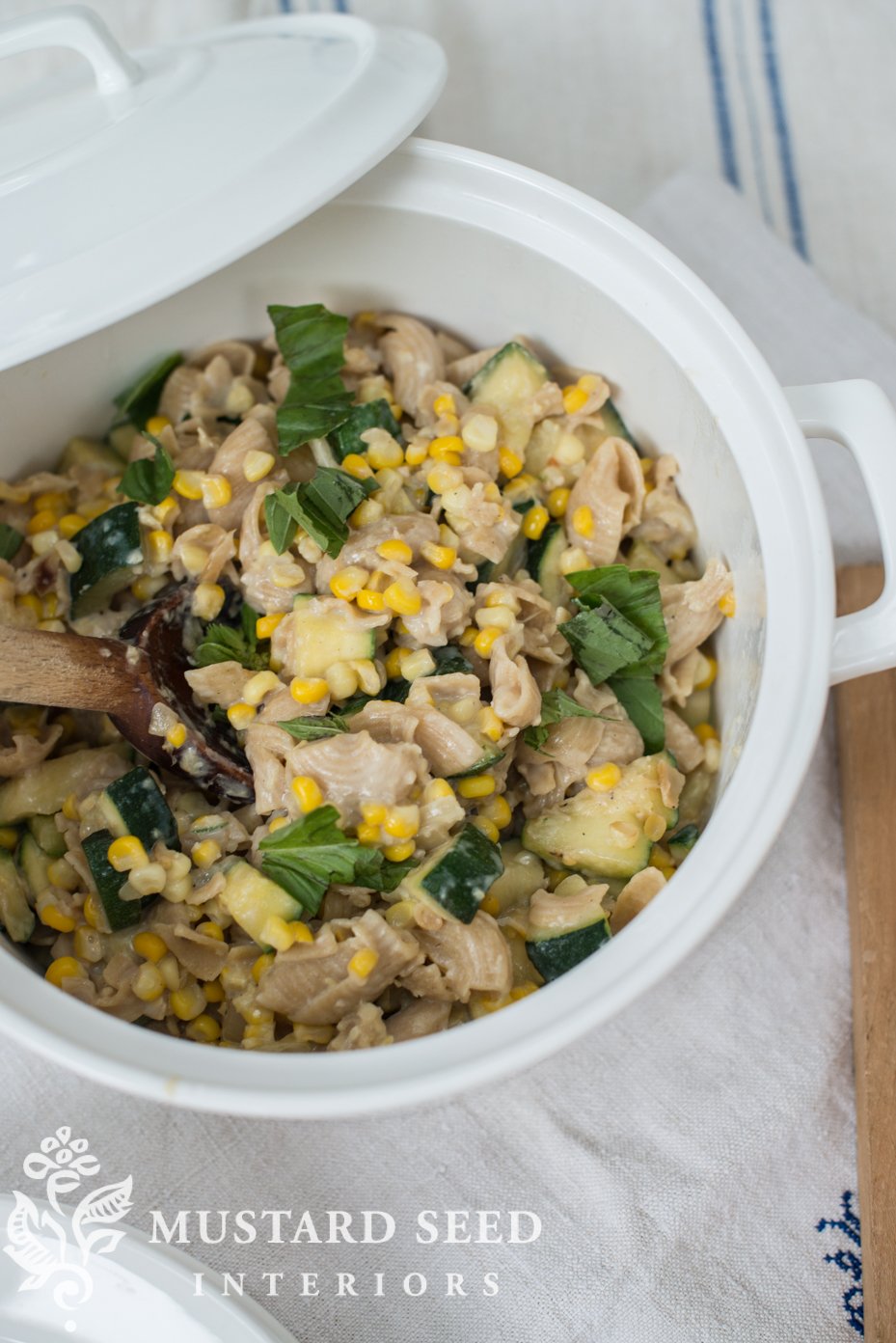 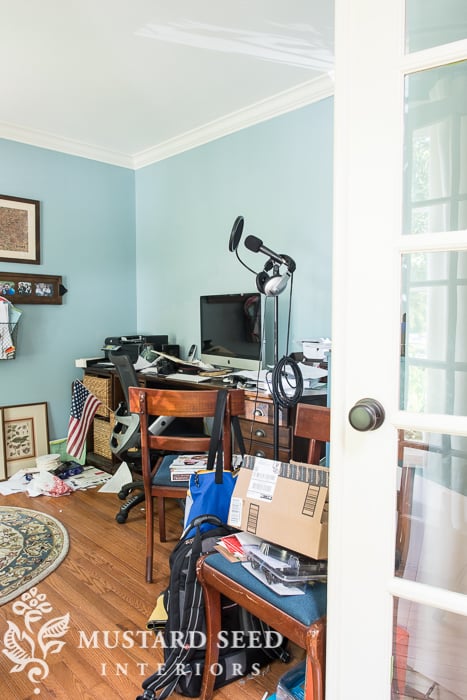 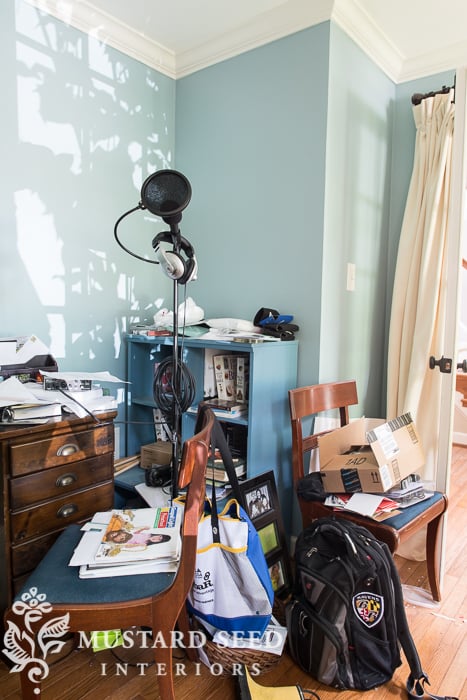 When I asked Megan what she loves about the space, there was a pause and then an, “Ummmmm….”

So, not much.  She did point out the crown molding.  Okay, that’s something.  Since there isn’t much in the room that she loves, we started with things in other rooms that she loves.  This corner cabinet… 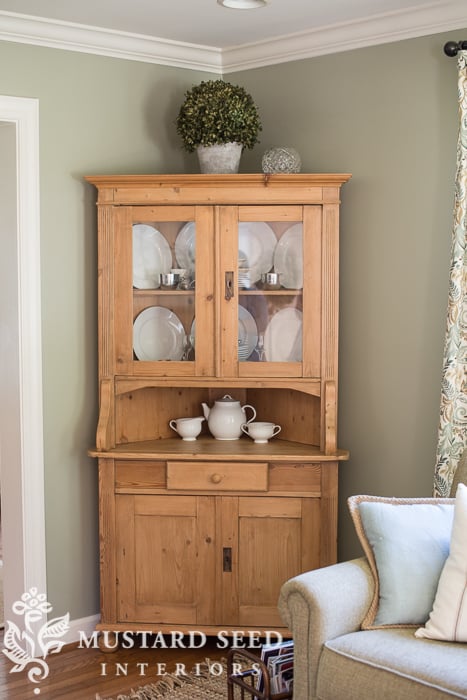 …a set of blue & white dishes… 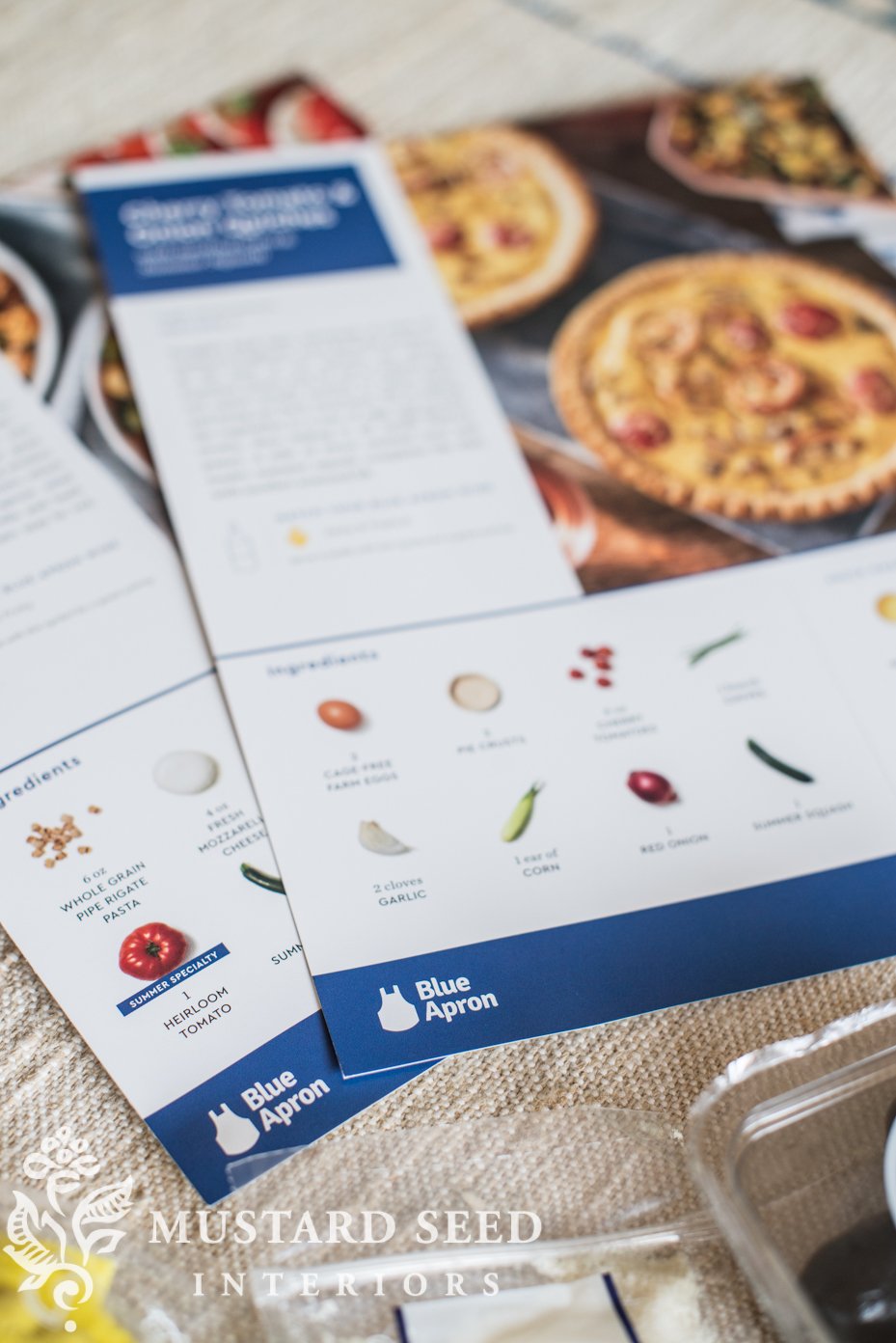 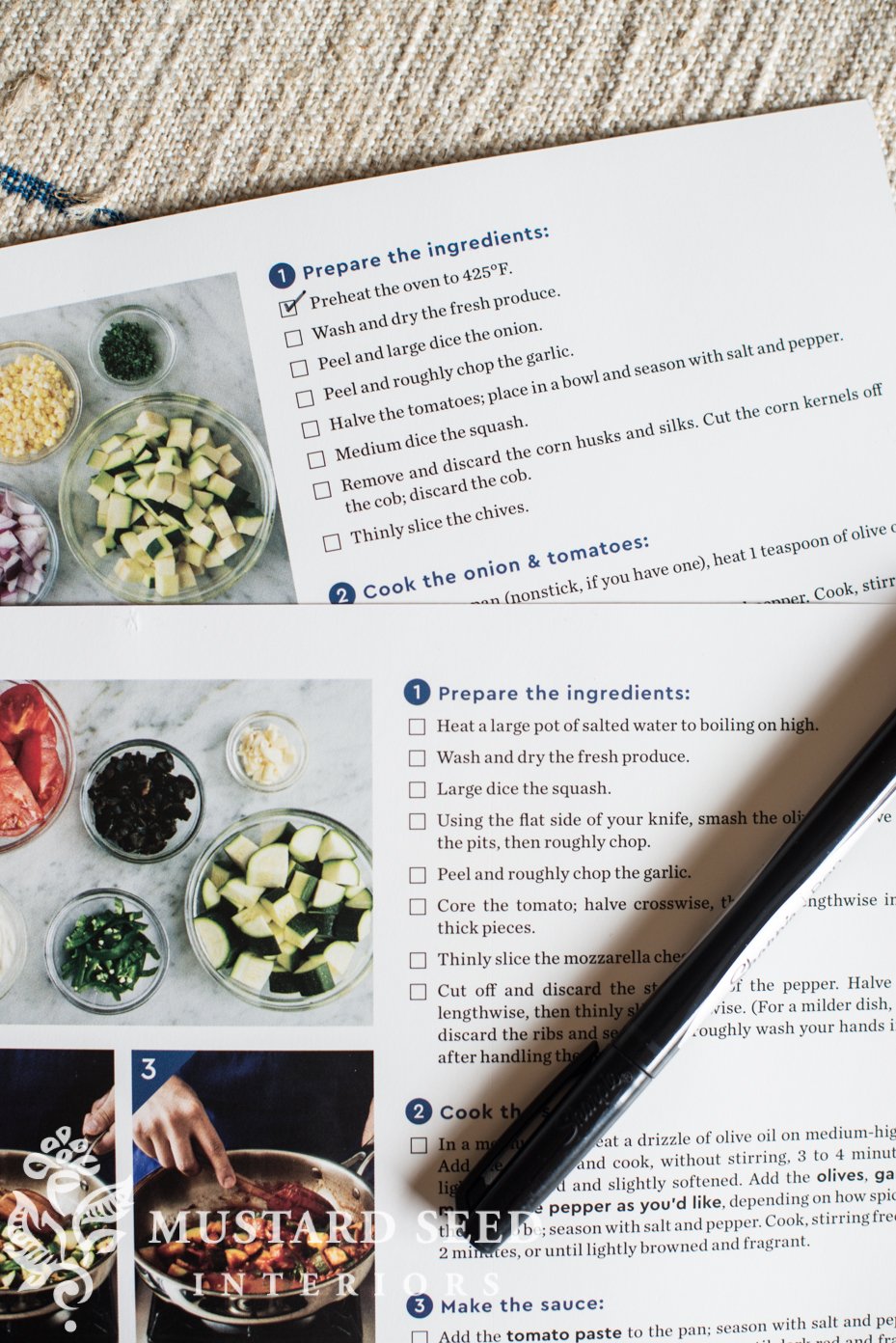 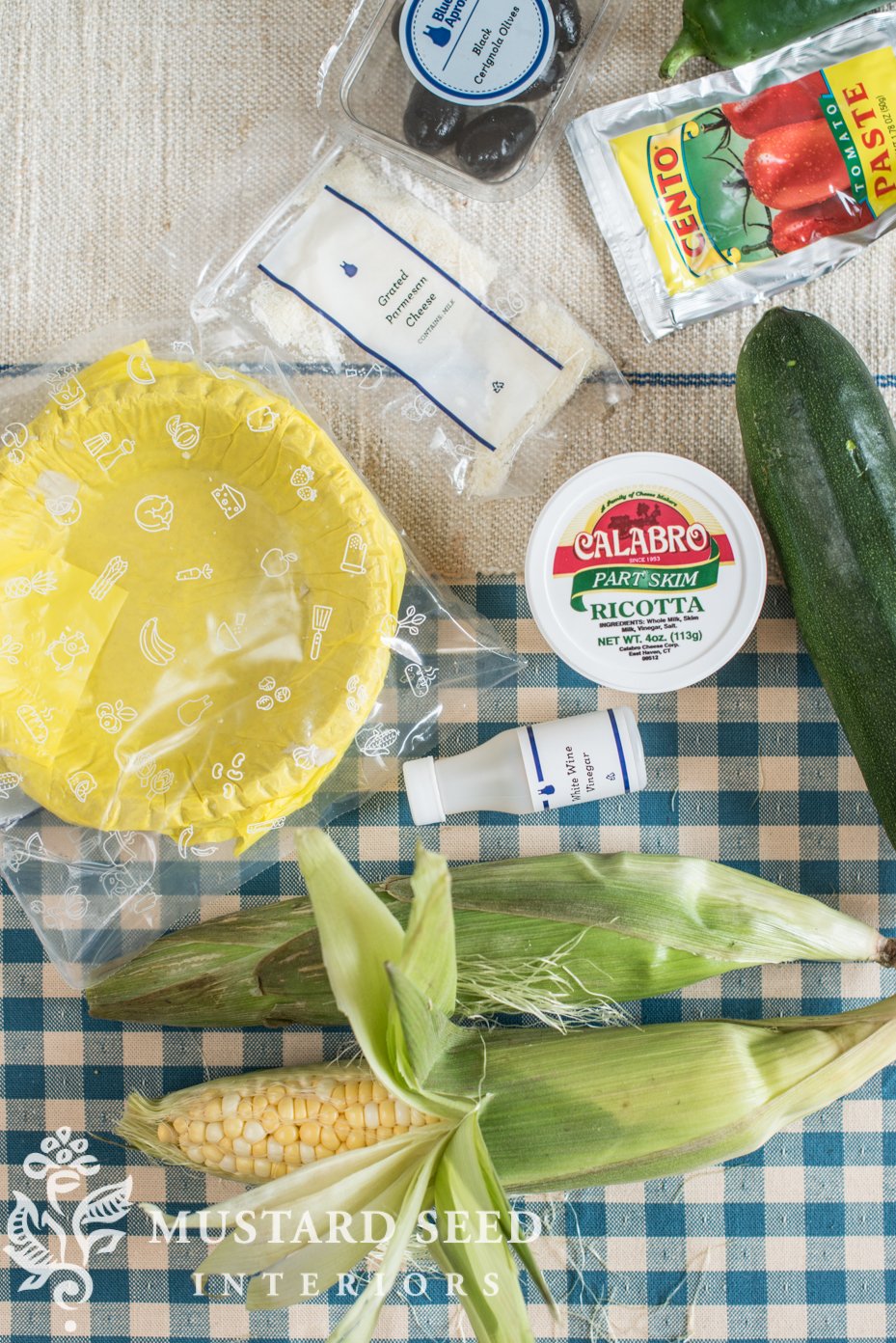 She also pointed out the contrast of the white cabinets and black appliances in the kitchen, a galvanized light and bead board wainscoting in the bathroom, jute rugs.  She is farmhouse at heart, trying to come out from under heavy traditional furniture that was passed down to her.

We kicked around some ideas, dug through her basement stash (another middle school underwear moment for her), took measurements and gave Megan some homework.

We’re hoping to have the space done in about a month and I’ll share updates, projects and decorating ideas you can use in your space along the way.

Up next in the series – the budget, the plan, our inspiration and a few nutty ideas…

If you want to hear Megan’s side of the story, check it out on her blog, Mercy in the Middle.

For part two of the makeover, how we made her a new office chair out of a couple of broken ones, click HERE.