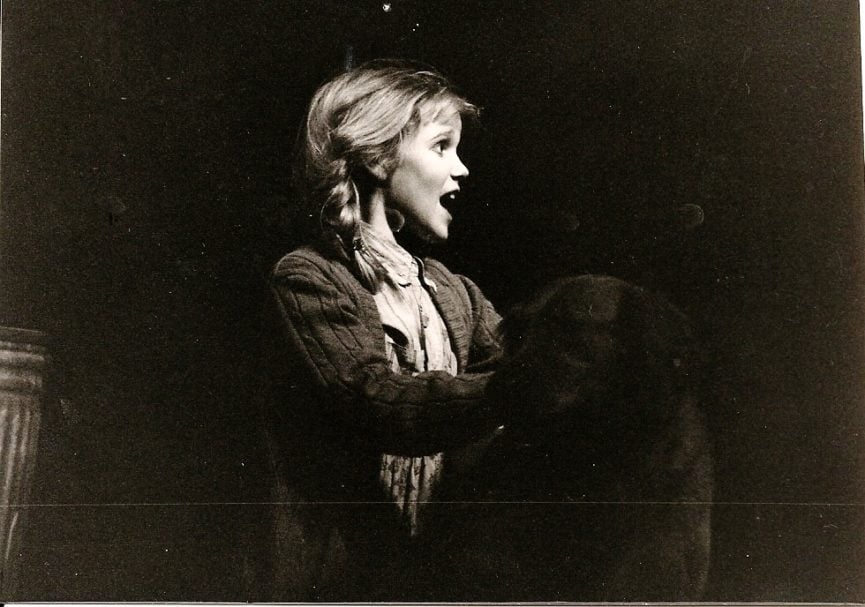 I’ve been thinking about that word a lot lately and have been challenged by it as I’ve been reading books like Essentialism and The Creative Habit. If I had to draw a diagram of my creative journey, it would probably look more like a spiderweb than a straight or even meandering path that heads in one direction.  And, I have to be honest, these books have made me feel like that’s wrong.

I once was on a straight path that led to Broadway. The markers on that path were plays, voice lessons, dance classes, monologues, auditions, stagecraft, improvisation, and hours of rehearsals. It was practicing a routine until I could do it without thinking and rehearsing a script until I could mutter it in my sleep. It was singing scales to improve my range and learning how to stand in the hotspot of a light without looking at it.  It was wearing crazy costumes, dying my hair, and putting on a new character every few weeks or months, depending on how long a show would run. I was focused and determined from the time I listened to Andrea McArdle belt out Tomorrow on my tape player to when it came time to chose which college I would attend and what I would study.  Of course, I went to a fine arts college and earned a degree in musical theatre, so I could continue on the path that started when I sang Together at Last with my dad when I was four. 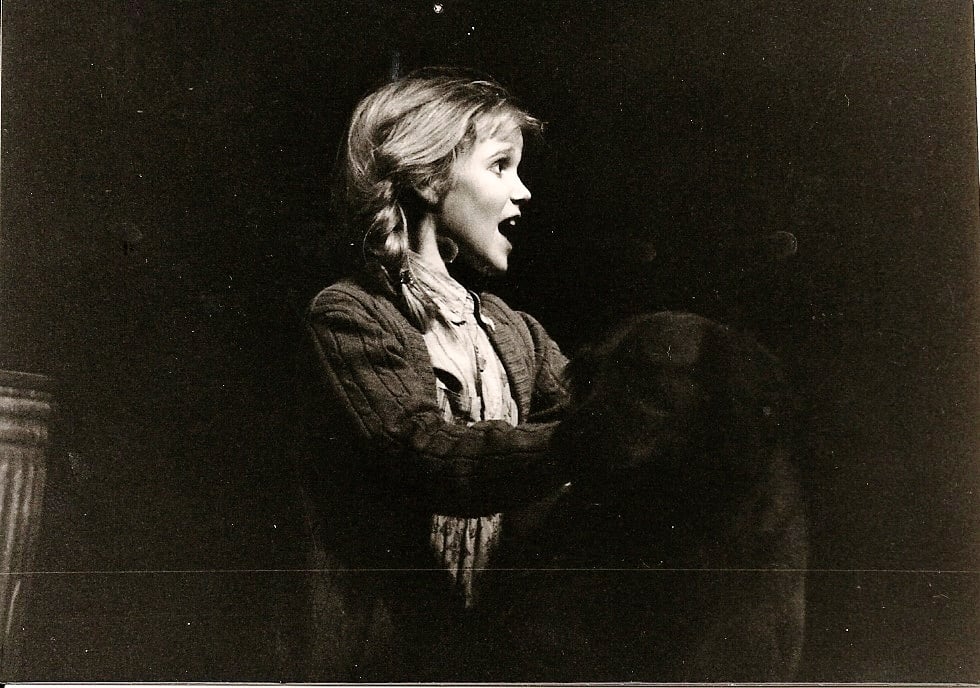 When I decided to marry someone on the path to being a pastor, musical theatre was something I agreed to give up.  It wasn’t that I could never act, sing, or dance again, but it just wasn’t going to work as a profession.  Over the years, I’ve been involved with church plays and drama camps, but I became a creative without a one thing to pursue.

I need to insert here that I don’t regret that decision.  There are times when I wonder what it would be like to be on stage again and how far I could’ve gone with it, but in my heart I know I was good…but not that good.  I often got roles because I was spunky, eager, reliable, and determined, not because I was the best.

Anyway, with professional theatre in my rearview mirror, I knew I needed a place for that creative energy and all of that determination to land and it landed on my home.  Like a virus needing a host, my creativity needed a new place to dwell in order to survive.  It dwelled in sewing curtains, painting furniture, rearranging rooms, and making do with thrift store finds and hand-me-downs.  It lived happily there for many years but evolved, spiderwebbed, and inhabited other creative pursuits over the years – writing, photography, styling, designing, drawing, painting. 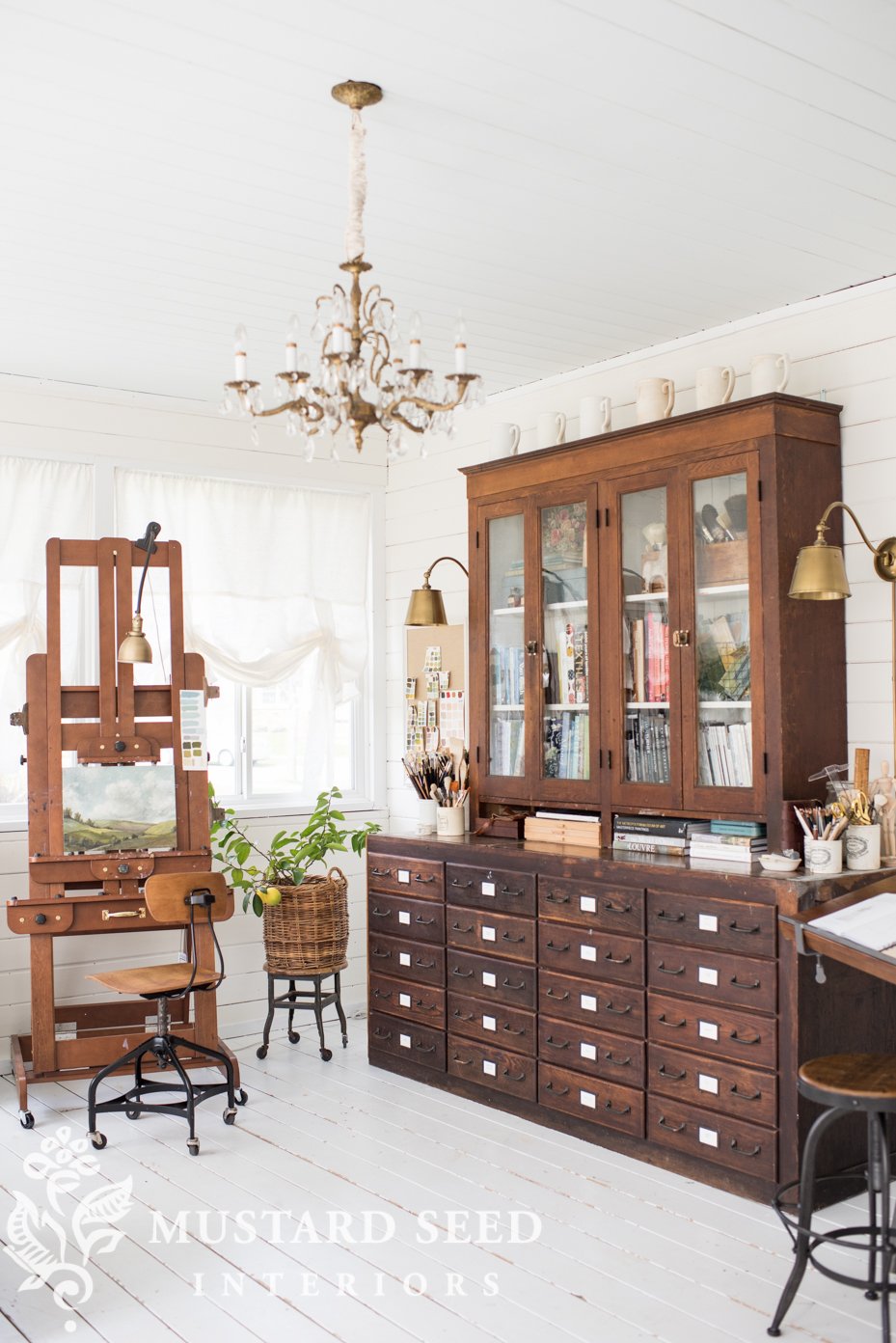 And all of this is now trying to coexist inside my very finite 41-year-old self.

I teeter between the thrill of reinvention coupled with the glorious variety of choosing what I’m most in the mood to do each day and the stomach-knotting fear that I will forever be a Jill-of-all-trades and a master of none.  I will be spread and pulled instead of intentional and focused.  I will one day disappear into obscurity as someone who could never quite make up her mind.  The furniture I’ve painted and upholstered, the home products I’ve designed, and my oil paintings will be scattered across second-hand stores in the US and will never be of note.  They will be pretty things, but not great things.  And I will be a could’ve been.

I sat down to write a short Instagram caption about mastery and it turned into this blog post.  Mid-caption, I had a creative crisis.  My throat grew tight, which happens when I feel stressed.   I realized that in trying to type out a simple caption, I’ve unearthed something bigger.  What I had to say wouldn’t be contained in the 2,000 character limit Instagram imposes.  What I had to say might be more appropriate for a private journal than public consumption, but almost out of habit, I clicked over to my blog dashboard and started writing in the blank box of a WordPress post draft.  It is something I’ve done over 3,000 times before and it felt like the place to work this out.

I recognize the humor in the fact that I’m writing while wearing my paint-smeared artist’s apron.  I was going to paint, but my creativity pulled me in a different direction.  It needed words more than colors today.  Fitting, though, that I was following a creative rabbit trail while struggling with my tendency to follow creative rabbit trails.  It speaks to the days when I would work on my house while wearing dance shoes, not out of whimsy, but out of distraction.  I put on shoes to do one thing and ended up doing another. 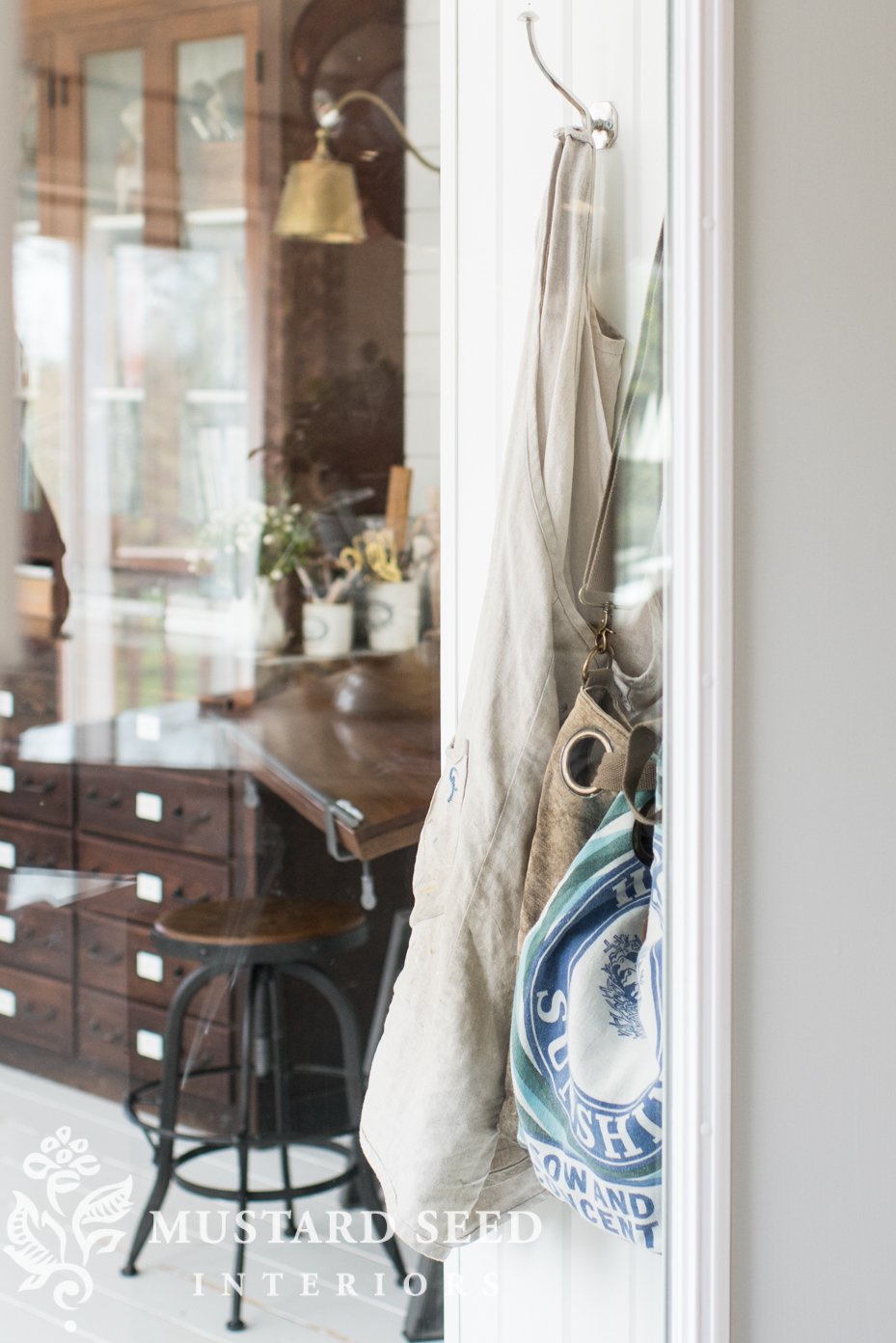 Now that I’m sitting, poised to write, I realize that my creativity led me here without providing a clear plot much less a tidy ending.

My brain tried to carry on a rational conversation with my creative soul.  So, where are you going with this?  Why are you bringing this up now?   What is your point?

I sit for a minute, hands on my lap and away from the keys.

My rational brain argues that even Twyla Tharp, one of the instigators of this blog post, was a choreographer who also wrote a book.  A beautifully written book, mind you, that displays her love of words and her skill at using them with care and precision.  As I ponder that thought, a flood of people accompany her.  People who were skilled at many things and brought a variety of creative offerings to the world.  As the examples rush in and out of my rational brain, I feel my throat relax, and my creativity, which was so vocal and demanding just a few minutes earlier, takes a step back and waits patiently for my response.

I sit for several more minutes, this time with my fingers hovering over the keys.

I had to walk away.  The answers weren’t going to appear across the blank screen no matter how much I willed them to.  This question needed space and time.

The answer showed up hours later when I was sitting on the benches at the climbing gym, leather journal opened in my lap to write between watching the boys scurry up a wall.  To allow the questions to hang a while longer, I did a few creative writing exercises…jotting down short observations, stories, and descriptions about the people around me.  I flipped over to my unlined insert and sketched a few scrolling motifs with birds and flowers.  I wrote out a few crazy business ideas.  I then turned to my lined insert where journaling and freewriting lives.  I toyed with those questions again and the answer appeared.  Sometimes, for me, journaling is like magic.  It conjures up something that was there, but I couldn’t find it.  It can only appear when graphite makes contact with paper at just the right moment.

I wrote, Maybe I want to be fulfilled more than famous. 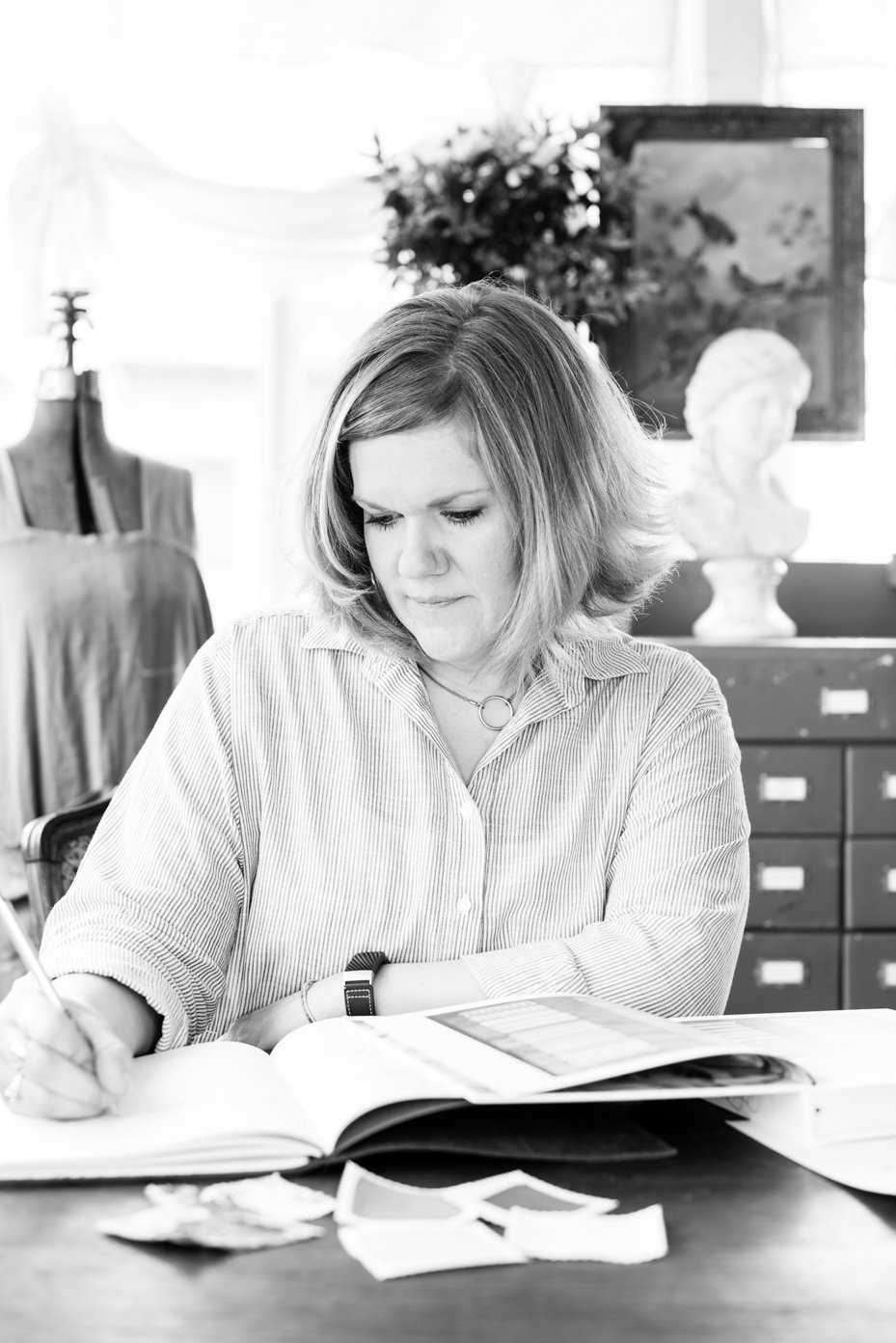 I marinated in those words and they soothed the agitation I felt.  They combatted my rising panic stoked by the idea that there was a sudden great need for me to pick a lane and stay in it.  Maybe one day I will focus on just one thing.  Until then, I might just make some pretty things and write some encouraging words.  I am resigned to the fact that it will continue to be an exercise in futility to succinctly tell people what I do all day and how I make money doing it without sounding like a bit of a nut.

But my focus will be on creative fulfillment and celebrating the diversity of each day.  I will take slow and prudent steps along the strands of web I wove together over the years and ignore advice that oversimplifies the unique nature of one’s creative journey.

I will live in the pursuit of progress over perfection…not just in one discipline, but in my whole self and all things worthwhile.

May’s Books of the Week

for the love of old books & burning Charlotte Brontë

95 Comments on “mastery & all things worthwhile”