On Saturday morning, the Lucketts Spring Market didn’t start until 10:00.  That gave my team a chance to catch a collective breath.  We all slept in a little bit later and were treated to an amazing breakfast by our hostess at the Zion Springs Bed & Breakfast, Chris.  Waffles topped with strawberries and whipped cream served with a side of bacon was the most decadent breakfast I’ve ever had on a morning of a market!  And, it was all served on blue & white dishes, which is a small thing that made me smile. 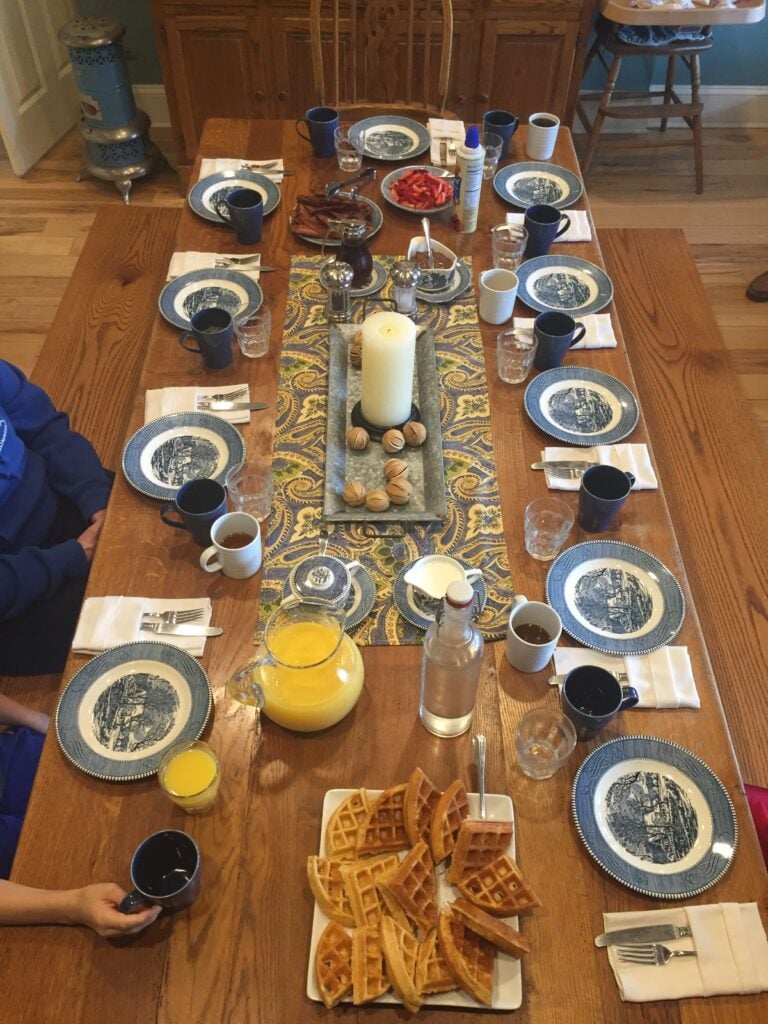 We also gained two more helpers, Stephanie (of the blog Stephanie Spring) and her husband, Eric.  When I met him, I immediately realized he was an unspoken answer to the question, “Who will be able to take my mural down?”  (He’s 6’7″!!)  Anyway, the handiness of Eric’s height aside, it was nice to have some fresh energy, given we were all pretty tired from the work of the previous days. 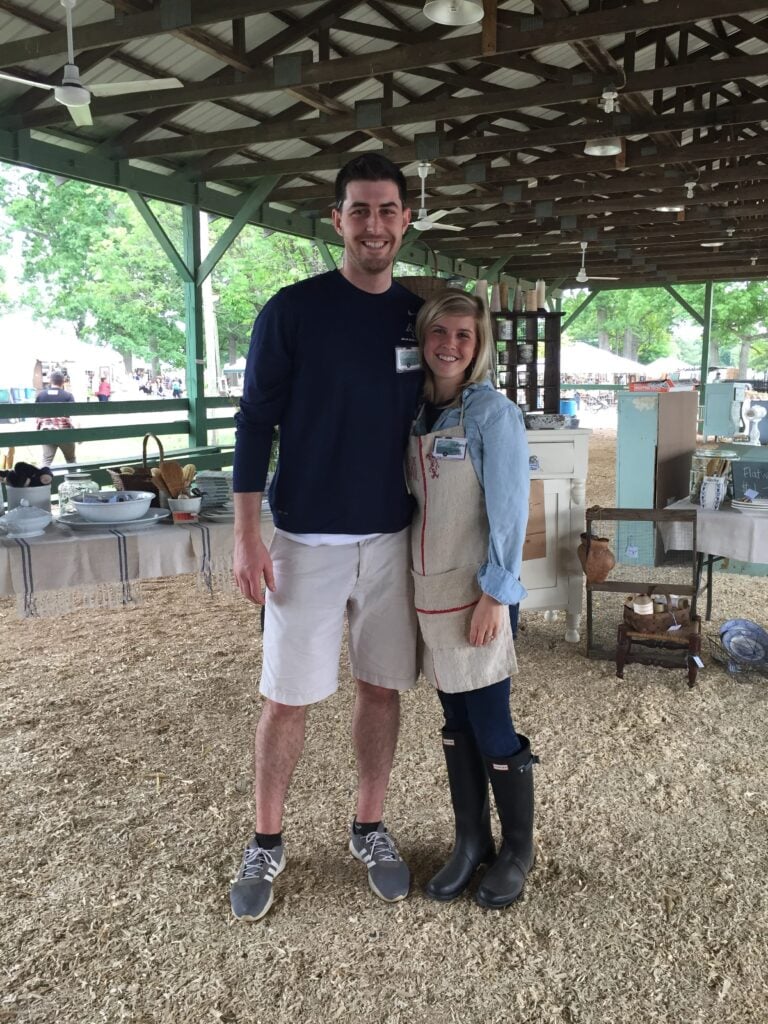 …and we really needed it, because Saturday ended up being the busiest day of the event.  It wasn’t our busiest day when it came to gross sales, but it was busy because there were a lot of people to talk to and visit with… 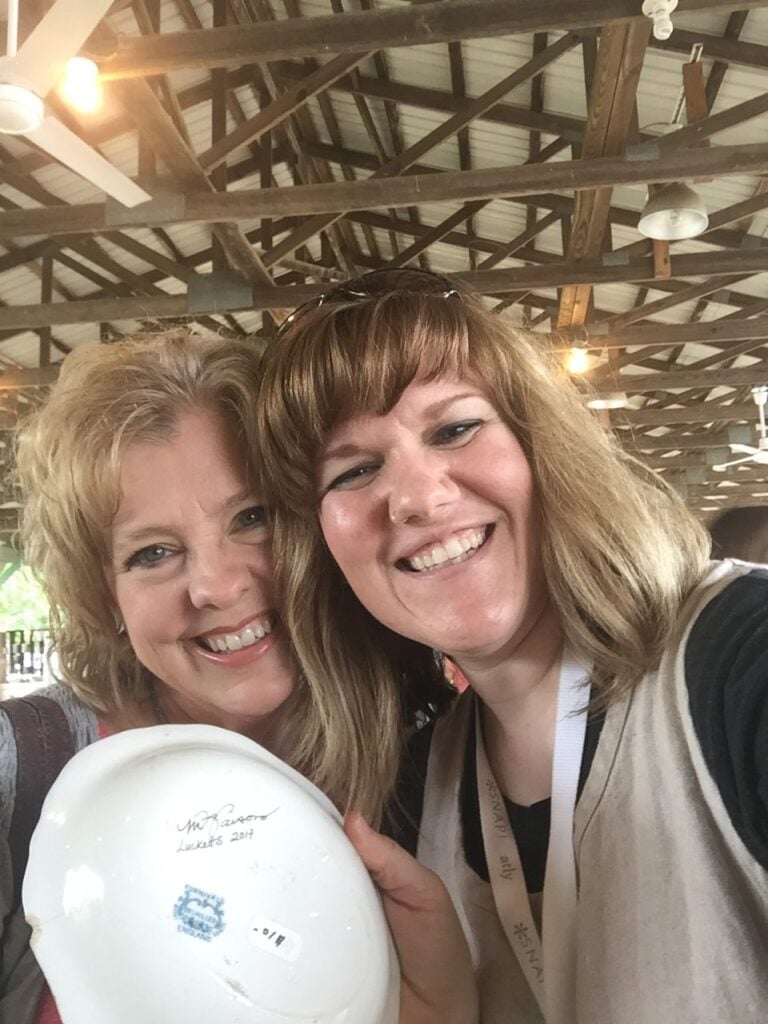 …and many furniture pieces sold and were collected, so we were constantly rearranging the smalls and the remaining larger pieces and, if that wasn’t keeping us busy enough, we decided to find a piece of furniture to buy and paint on the spot!

I think the idea started out as a bit of a joke, but when Emily, Jenn, and I realized we were all actually serious about the idea, I told them to grab $100 from the register and let’s have a bit of fun with it!  Emily and Jenn were set loose in the market to find a good piece to paint.  They came back in about 15 -20 minutes with a pretty antique dresser that would benefit from a coat of paint, propped up on a dolly.  They even came under budget and snagged it for $75. 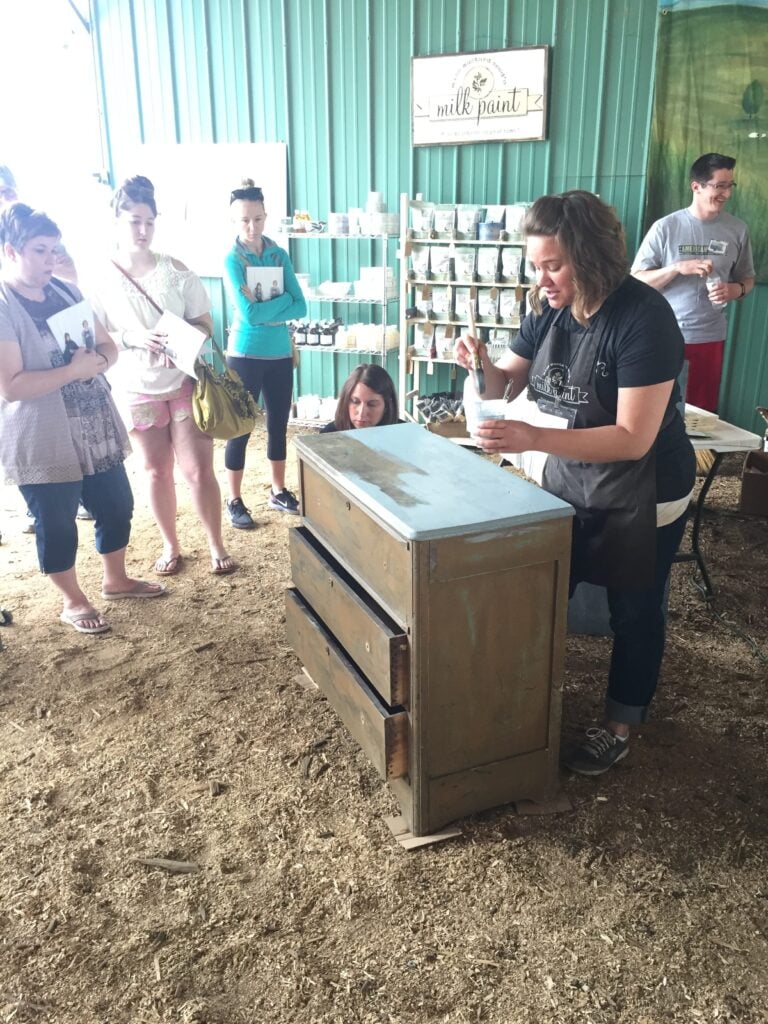 …and they both went straight to work! 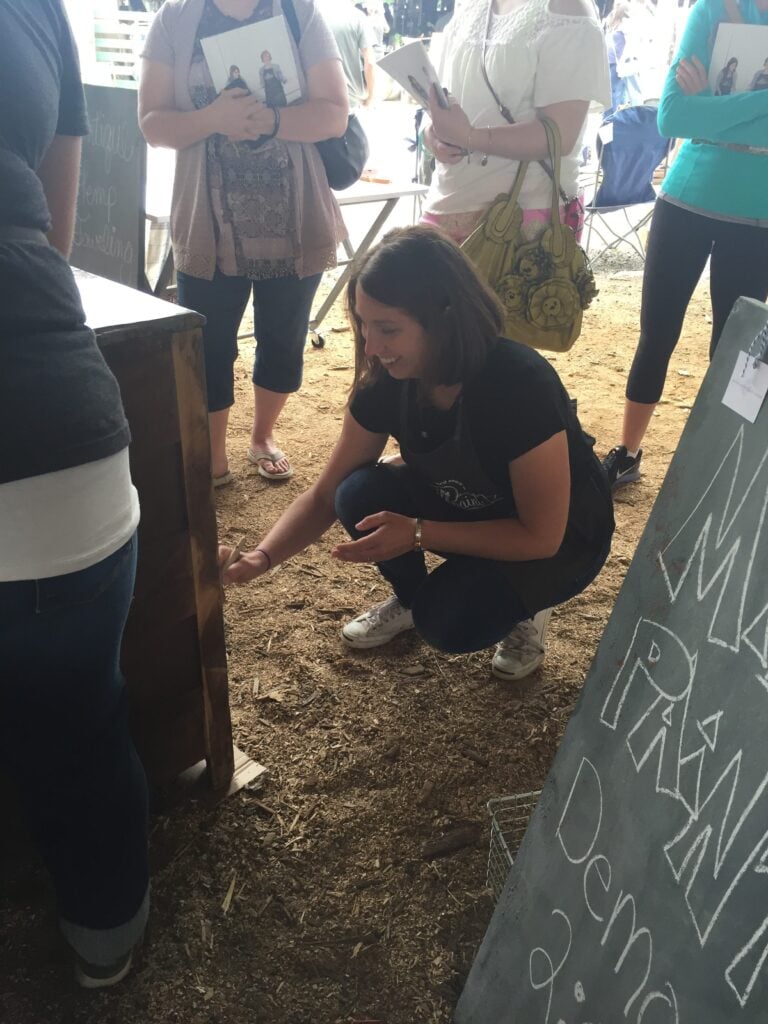 They used my mom’s favorite color from the line, Bergere.  And my, oh my, it proved to be a brilliant idea, because it drew a crowd and the milk paint and finishes started flying off the shelves.  Jenn explained milk paint and answered questions while Emily painted and encouraged onlookers to brush some on as well. 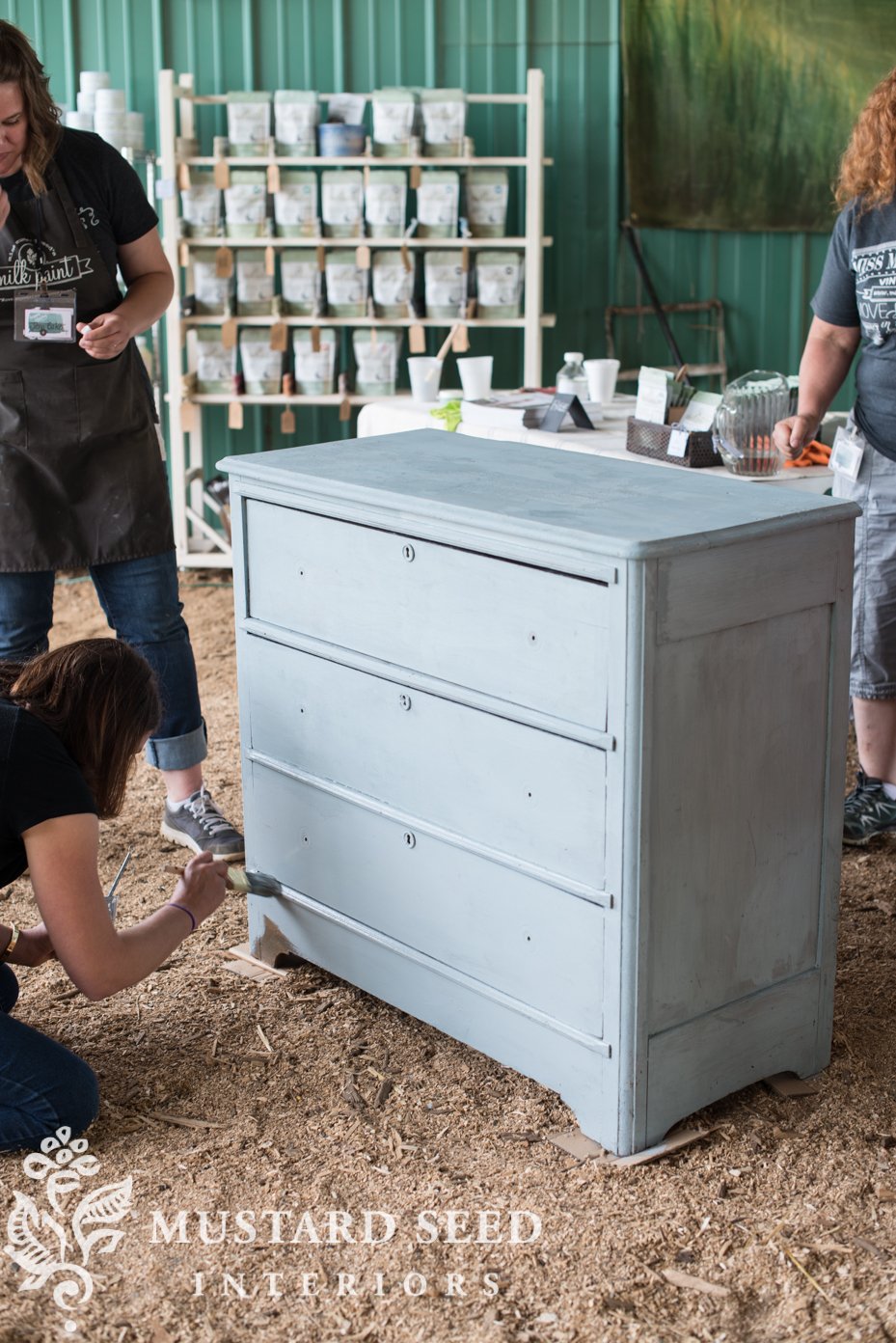 There were times on Saturday when the rearranging was overwhelming.  I know that sounds silly, but I really wanted my space to look nice for shoppers and there were times when stuff was haphazardly placed on the ground or on any free surface.  I would work on an area and turn around for a minute to talk to a customer, then turn back to that area and what I was working on would be gone!

It started to become a joke that if we wanted to sell something, one of us just needed to touch it.  As soon as something was moved, it sold!

Jenn, Emily, Stephanie, and Diane were all amazing at jumping in to restyle a space and the guys were always at the ready to shuffle furniture around at our direction.  Jeff even did some on-the-spot improvements and added hinges to the green grain bin that hadn’t sold, yet.

(And, by the way, Jeff was doing all of this with a swollen hand.  It was like the stay-puff marshmallow hand and we all sort of poked fun at it, even Jeff.  Well, he learned after the show that it was, indeed, broken and he’s now in a cast!)

There was finally enough of a lull Saturday afternoon that we were able to get the remaining furniture in somewhat of an organized fashion.  We did have to use a couple of folding tables draped with antique hemp sheets, because we were running out of places to put the smalls.

As the day was winding down, I went around with my fat Sharpie marker and cut prices for Sunday morning.  Sunday was going to turn into Miss Mustard Seed’s yard sale!  (Without a foot bath, old easter baskets, or a table of $.50 baby clothes.)

With the booth ready for Sunday shoppers, we decided to pick up a bucket of chicken for the group and have a leisurely dinner at the B&B. 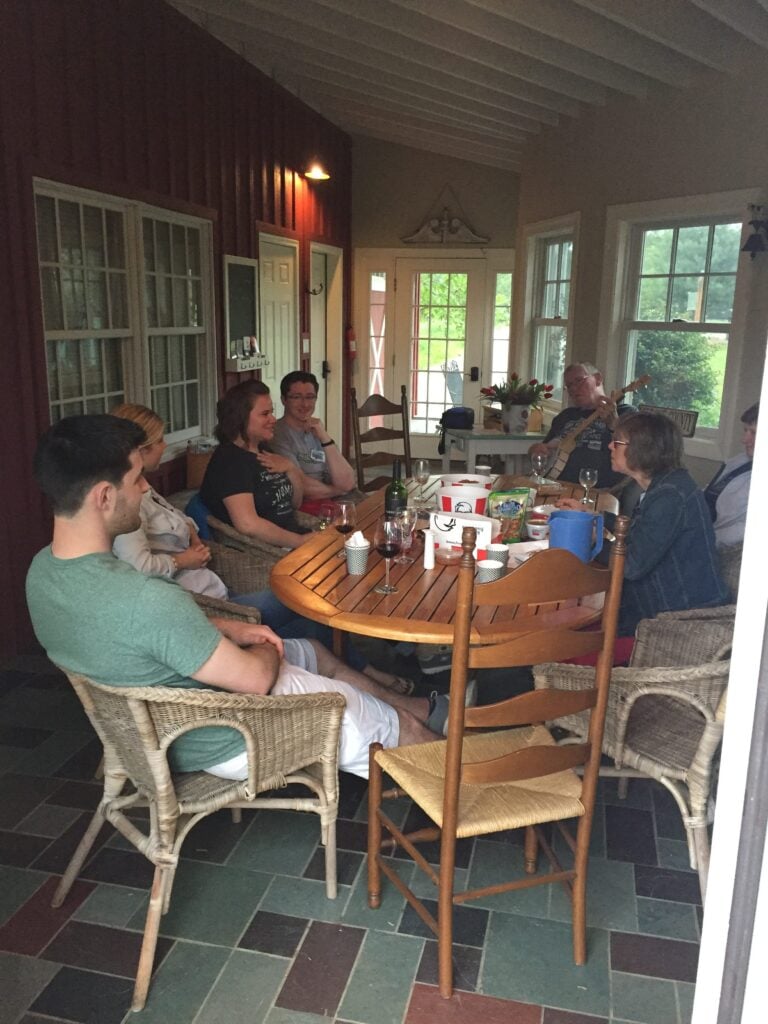 It was a delightful evening after day where none of us had much of a chance to slow down.

Sunday morning started at 10:00 again and, again, we were appreciative of the more relaxed morning that opening time afforded us.  Chris and her team served us quiche, coffee cake, and fresh fruit before we headed off for the final day of Lucketts.  She managed to top the waffles from the day before.

Jeff and I had to pick up the truck that we rented for the return trip.  We weren’t sure if we would need it or not, but we didn’t want to take any chances!

When I arrived at our space, a little bit later than I had planned, my mom shook her head and laughed.  “Everything’s gone…”

What she meant was that dealers had come by my booth Saturday evening and Sunday morning and pulled tags off of pieces they wanted to purchase.  In addition, I had sold the dry sink overnight and Diane sold a couple of pieces in the morning before we arrived.  It took a few minutes to sort it all out, but we were basically left with just two pieces of furniture.  The jelly cupboard from my home and a small wash stand we purchased on Saturday and painted on Sunday.  (I didn’t get a picture of that one!)

We had quite a bit of ironstone plates left, so we moved them to a “dollar table” and they started to sell pretty quickly. 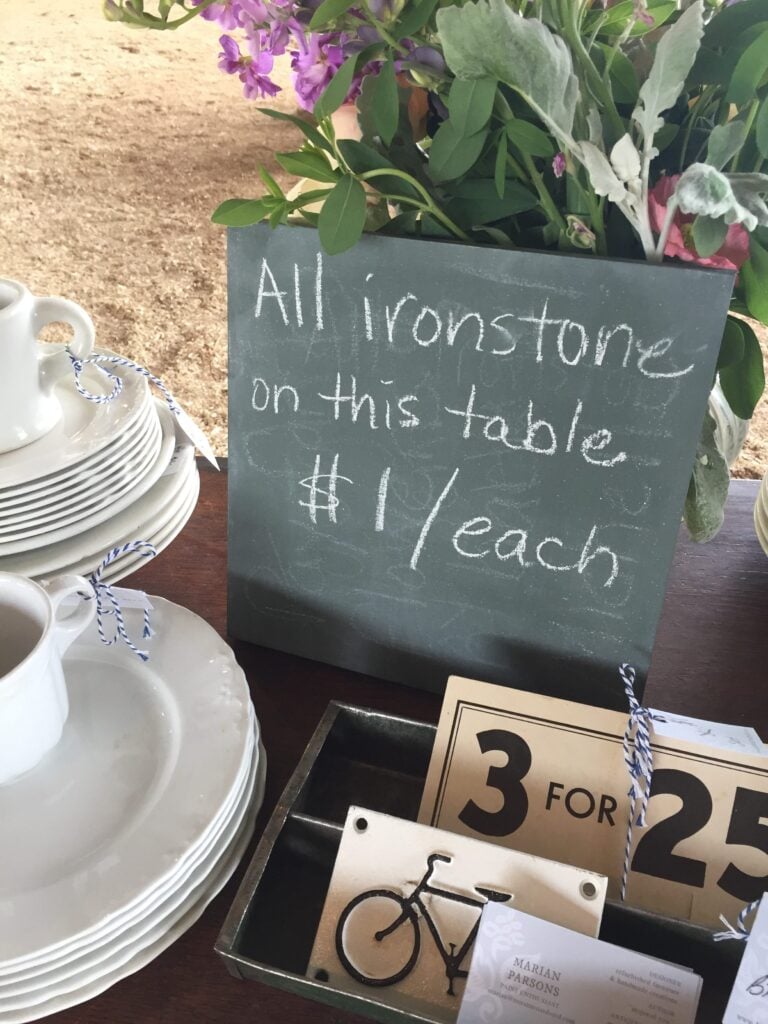 While Sunday was relaxed, we had a pretty steady stream of shoppers looking for bargains among what was remaining. 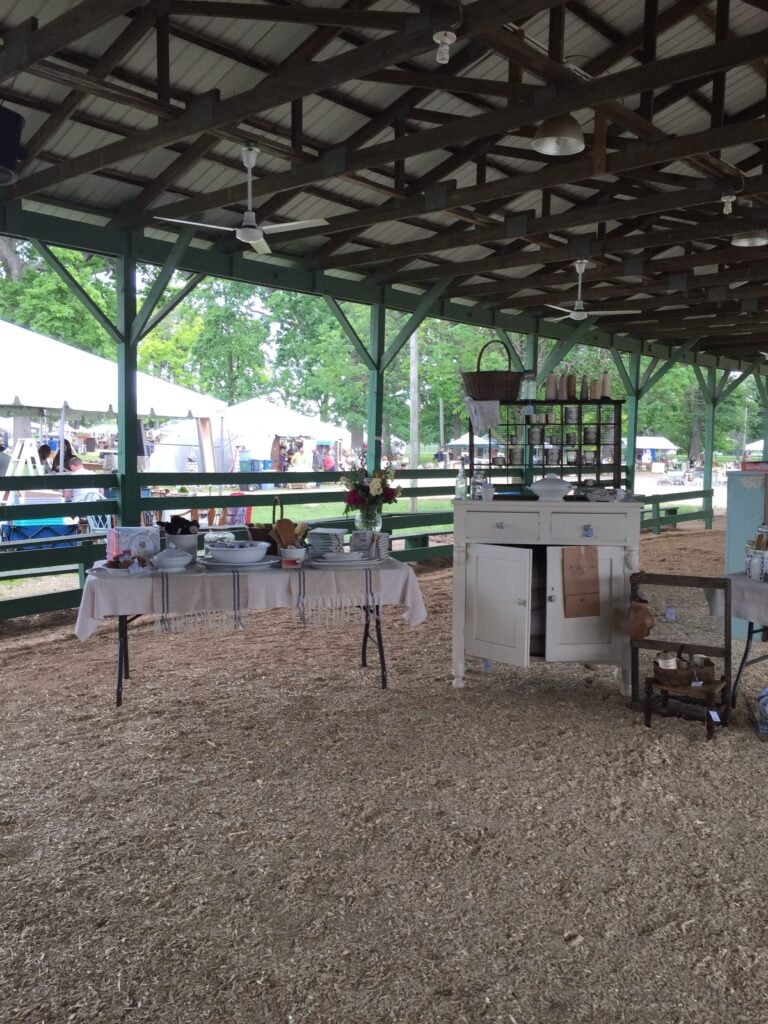 Jenn, who was a total machine all weekend, taught one more milk paint demo.  The owner of the B&B had a table that needed to be painted, so Jenn used that piece for the demo. 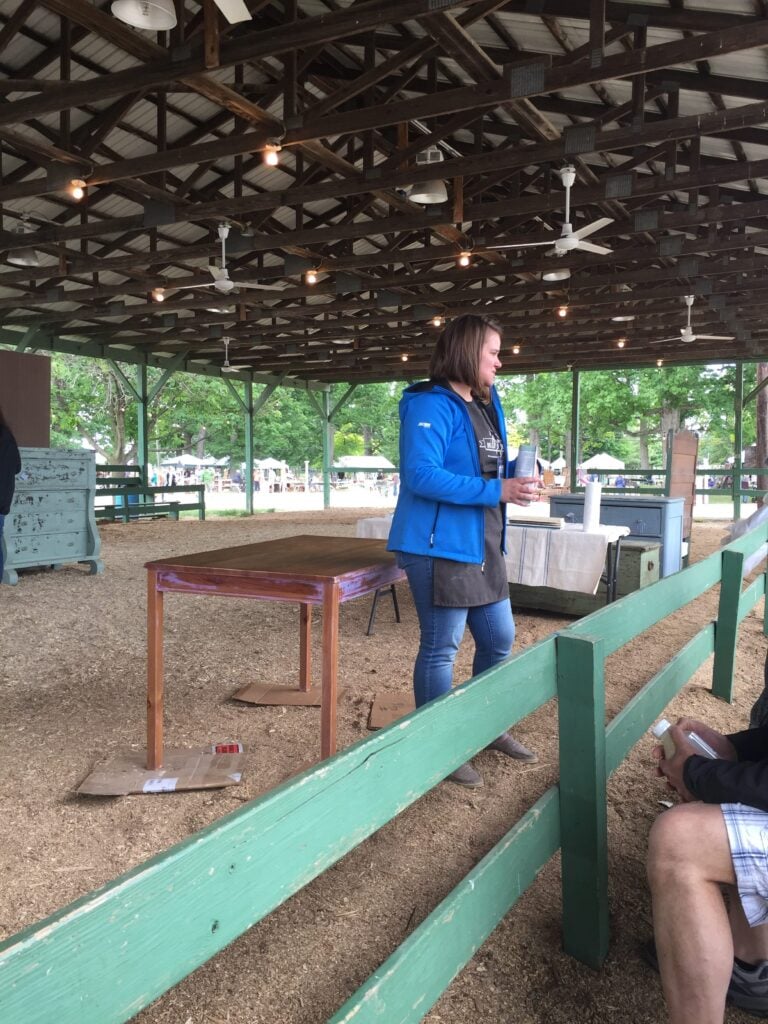 And Sunday was the first day we I had the chance to walk around to visit other vendors, do some shopping (although I resisted buying anything), see how the market was set up in the new venue.  It was the first time I saw I had my own directional sign, which was a fun little surprise! 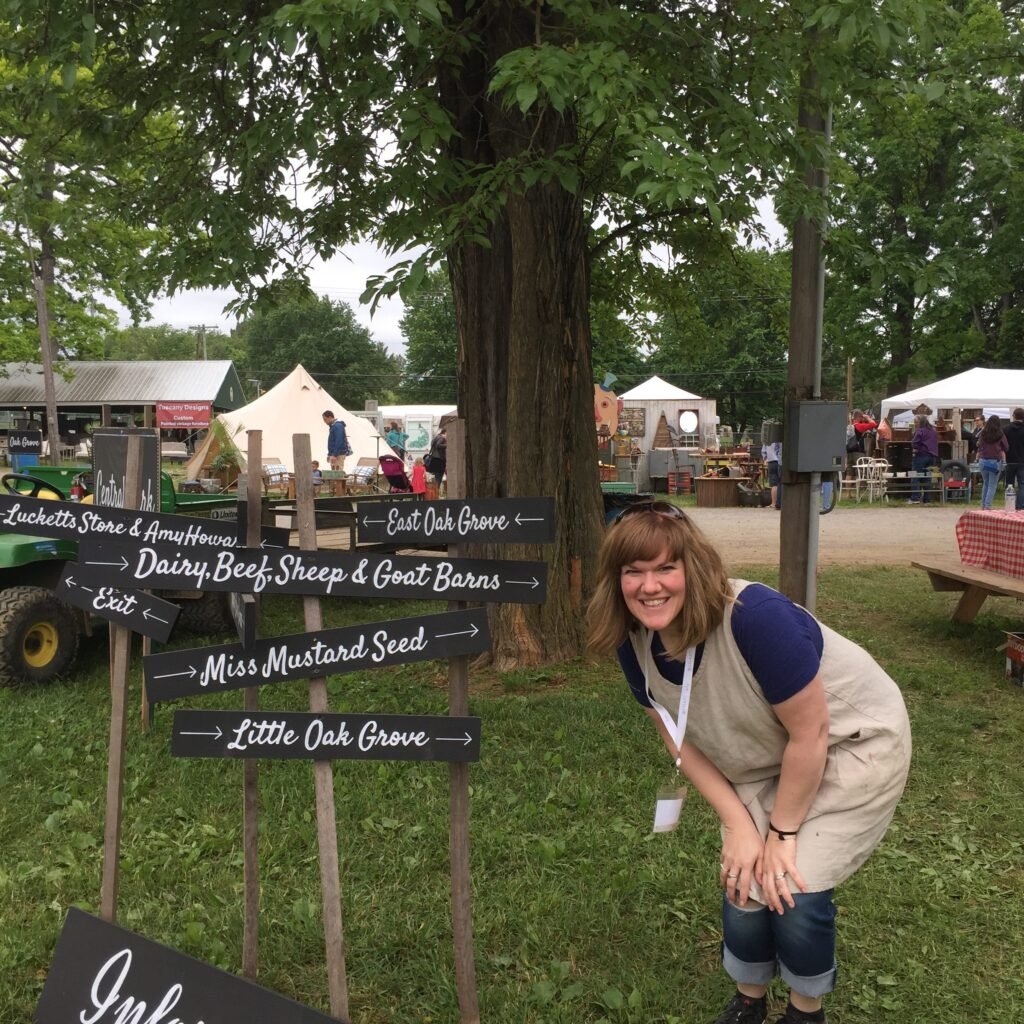 By the very end of the day, all of our furniture had sold.  Our counter and display pieces had found new homes as well.  All that was left to pack and load were smalls and things we needed for the event, like chairs, a ladder, coolers, etc.  I didn’t realize how little was left until I tidied up the studio on Tuesday.

This is all that was left… 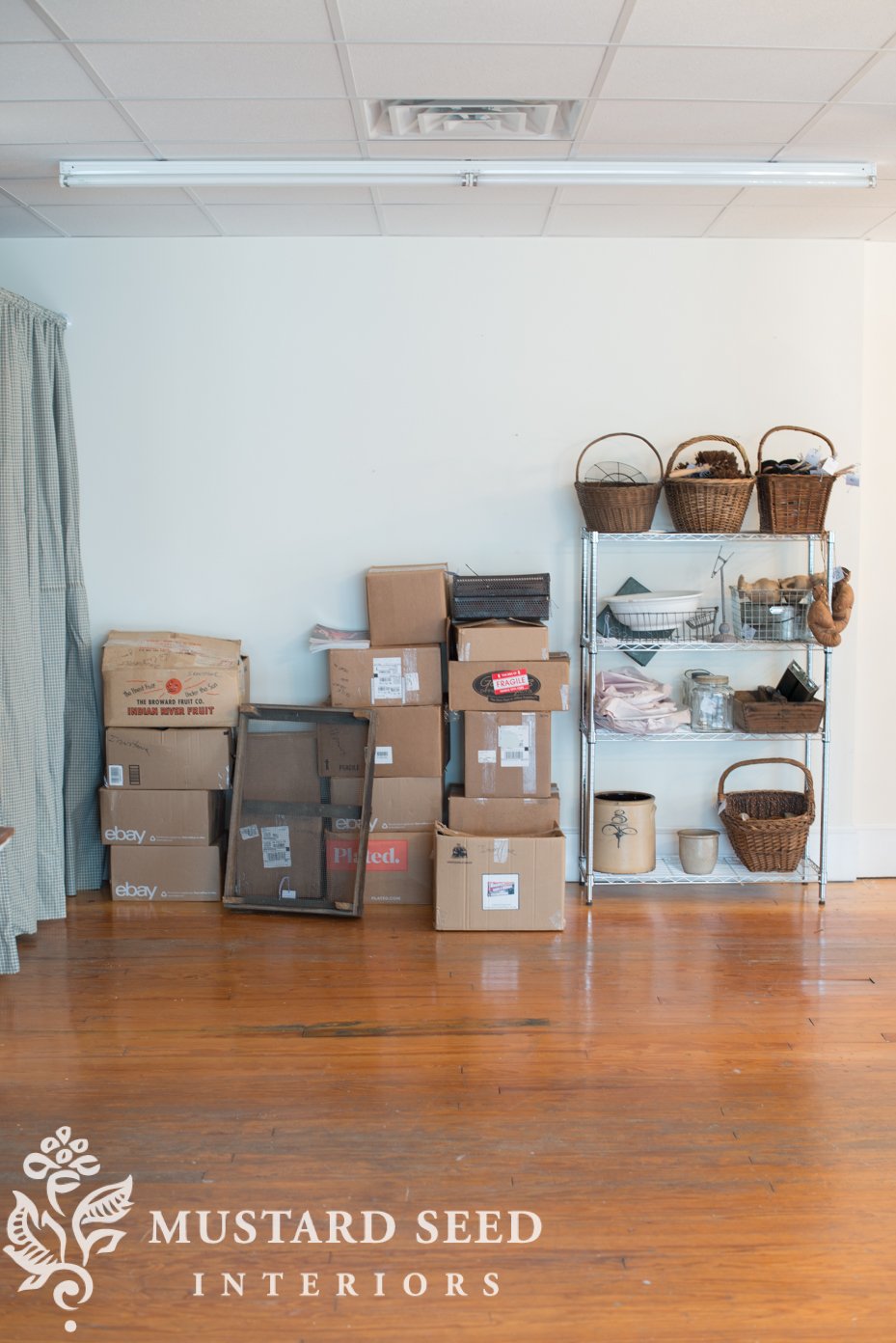 The boxes are filled with a mix of milk paint, ironstone, books, and some other smalls.

We came to Lucketts with two 20′ trucks packed with stuff, so it’s pretty amazing that this is all we have left!  And all I have to say about that is, thank you!

Thank you to the organizers of Lucketts, my reliable team, and amazing customers.

Thanks to all of you for continuing to be a part of the story of this business.

A walk down Lucketts lane 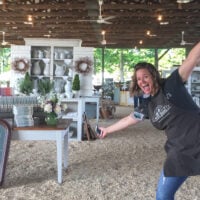 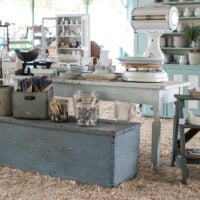