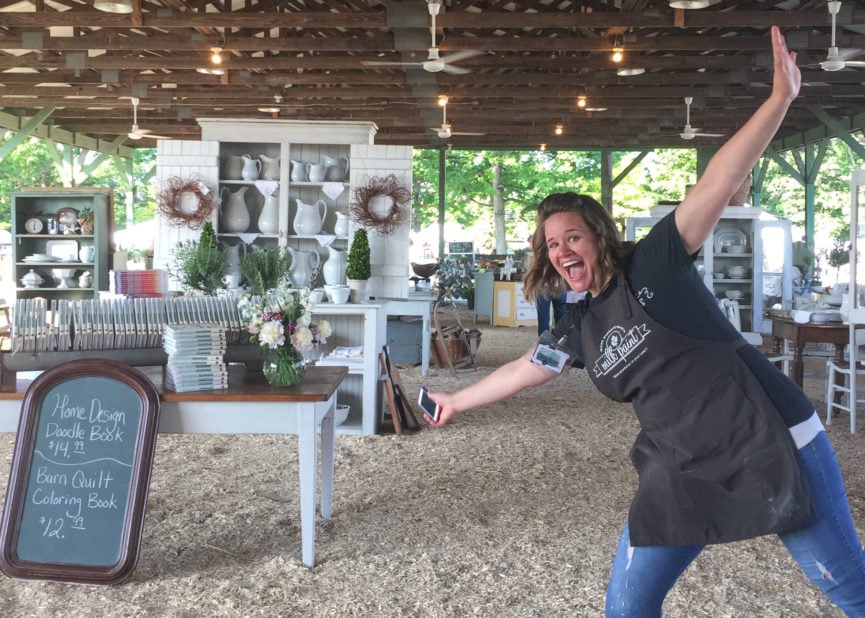 If you missed part 1 of the Lucketts 2017 recap, you can check it out HERE.

Friday was VIP day, but it was a little different this year.  The VIP tickets were essentially for early admission from 8:30 – noon.  At noon, the gates opened to general admission, so we were expecting a morning rush and another possible rush in the afternoon.  Our space was as ready as it could be when the gates were opened to the VIPs. 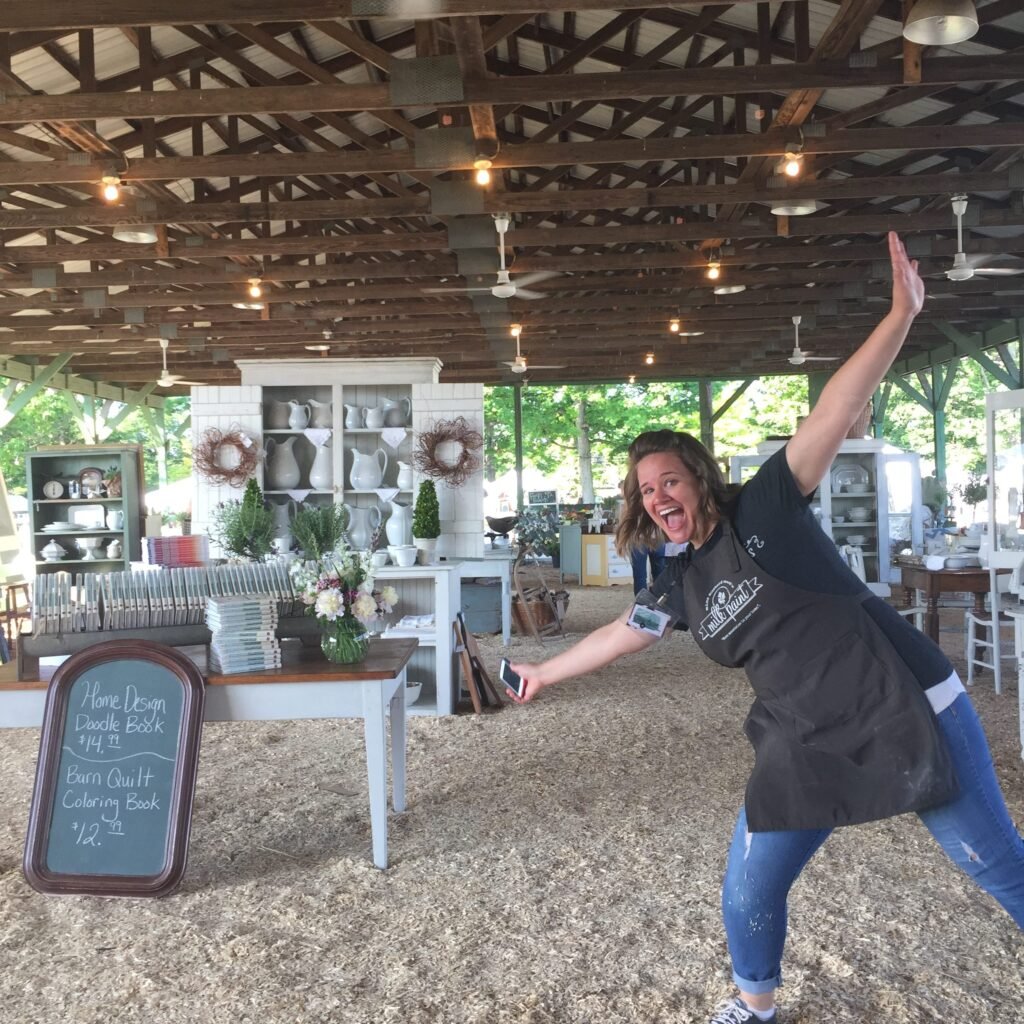 (And we were excited, as you can clearly see!)

At our old location on the Lucketts grounds, we were pretty close to the entrance, so we could see the wall of people approaching.  At this new location, we were a bit of a hike from the entrance, so the crowd was diffused a bit once they arrived to our booth.  We later heard from vendors near the entrance, though, that there was a train of shoppers, with wagons in tow, who made a beeline to shop my space!

Once the people made it, we started to fill up quickly and I was thankful for all of the extra room we had this year.  What felt not-so-cozy and spread out at set-up looked comfortable once it was populated with shoppers.  I got the sense that people could really see and appreciate the vignettes and the “rooms” we created.  There was a relaxed vibe that was definitely missing last year as our line grew to a 45 minute wait.

We had four registers working and still had a bit of a line, but we got people checked out and on their way pretty quickly.  I even started processing quick cash sales to help with thinning out the lines. 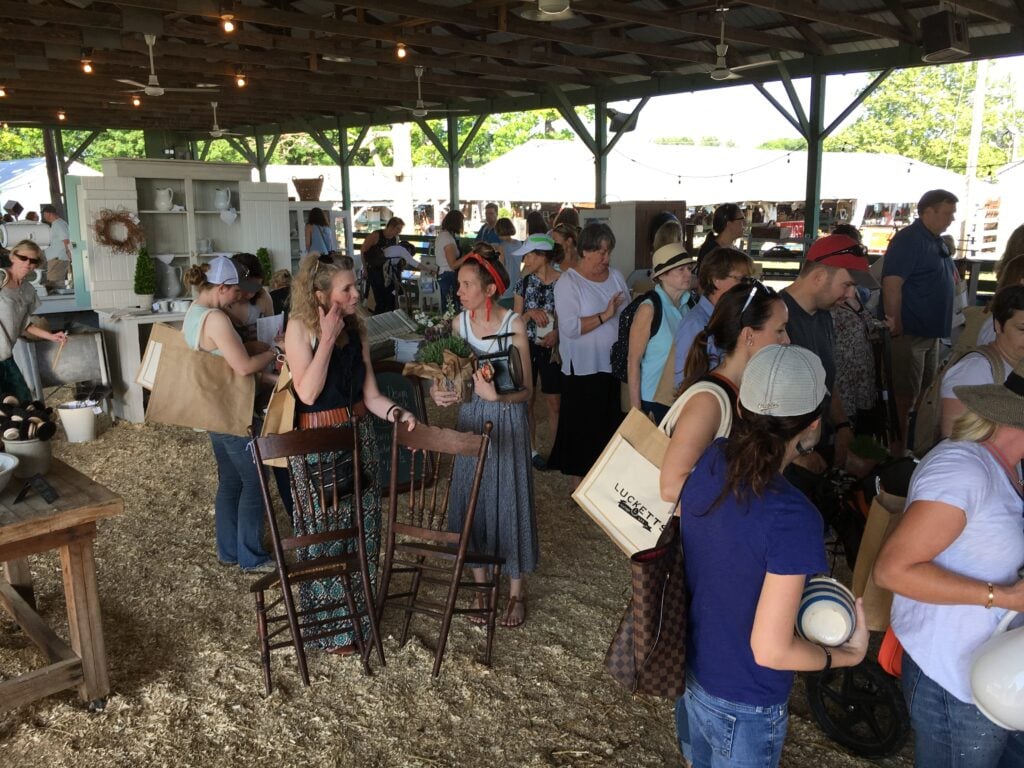 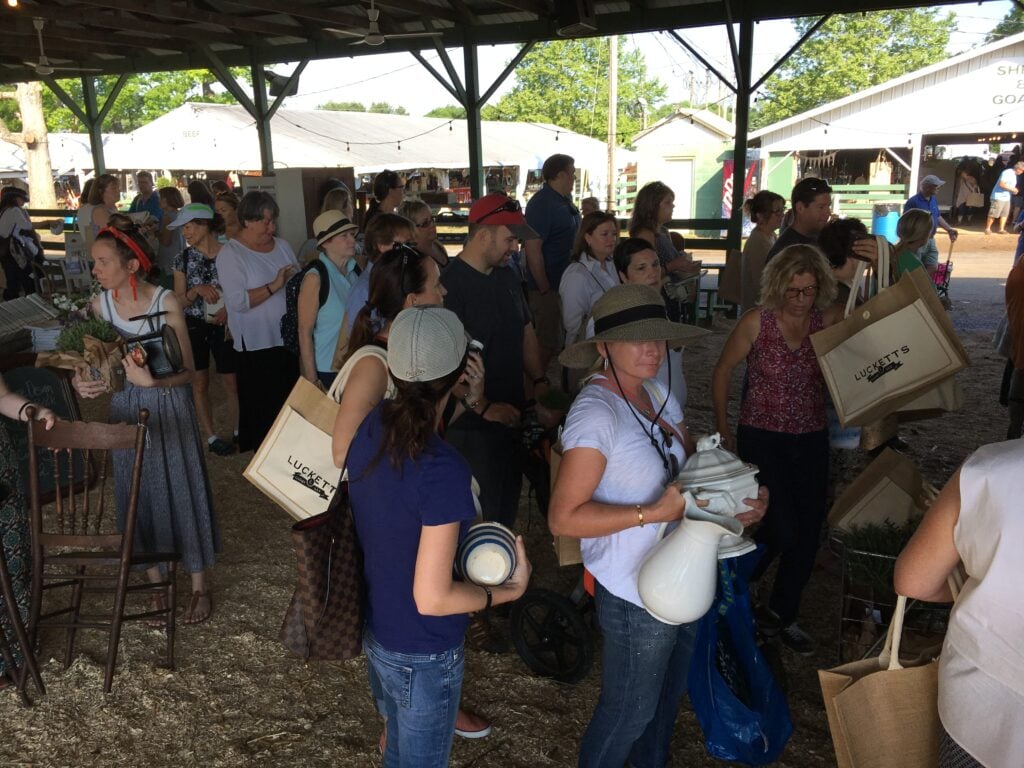 I was asked to do a milk paint demo for the local news channel in the middle of our busiest morning, but we had a little bit of a lull, so it worked out perfectly. 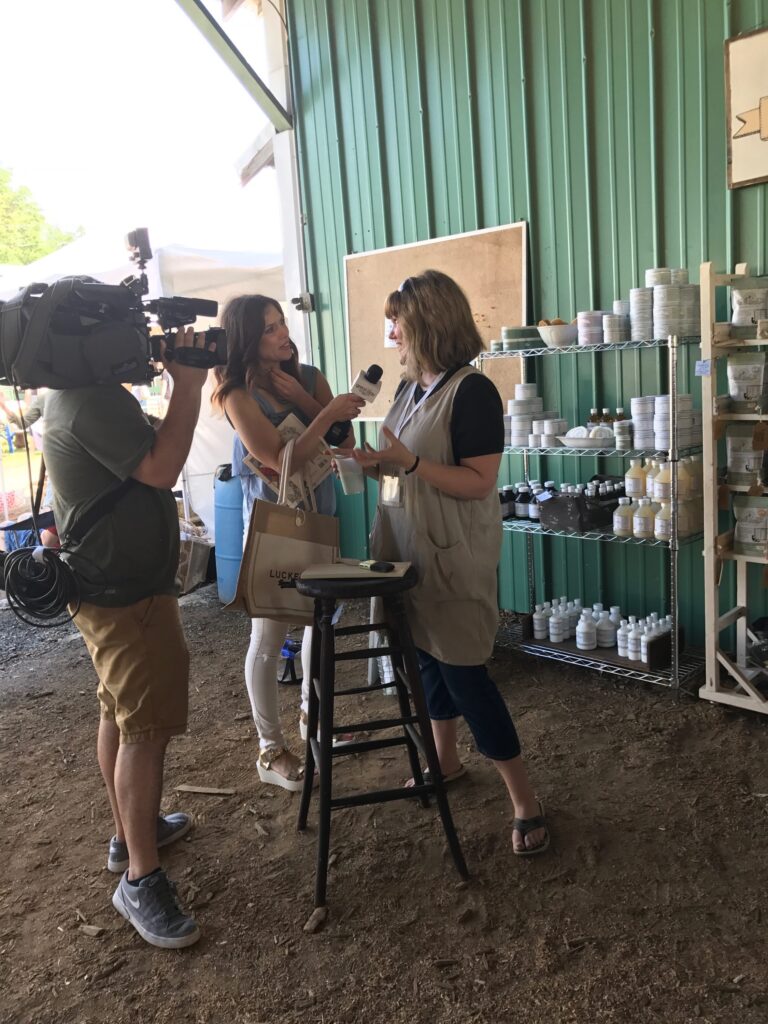 I know I talked about milk paint, but I really have no idea what I said!  The whole event was a bit of a blur and that was just another part of the blur!

The day was full of sales, meeting readers and regular Lucketts shoppers, and talking about paint and antiques.  My team, that was mostly made up of people who hadn’t worked at my booth in previous markets, worked together like a well-oil machine.

My mom, Debbie, Jenn, and Diane ran the checkout counter.  My mom has been checking out customers since my second Lucketts Spring Market and Debbie, who seems to be good at everything she does, has been helping me paint and prep for Lucketts while Kriste was on maternity leave.  Diane and Jenn would jump off the register when the lines slowed.  Jenn, of Eight Hundred Furniture, who is a MMS Milk Paint retailer and the manager of the MMSMP Instagram account, would answer milk paint questions.  Diane, who is a five year Lucketts veteran shopper and antiques dealer at Suite Pieces in Long Island, New York, would lend a general hand to customers.

Emily of Penny & Ivy, who also helped with Lucketts prep and is a fellow “furniture gal”, and my husband, Jeff, helped customers with questions, carrying bulky purchases, etc.  My dad and Jenn’s husband, Mark, worked two wrapping counters and managed the packages we were holding for customers while they shopped.

And Susan, one of my long-time readers, worked the cutting counter… 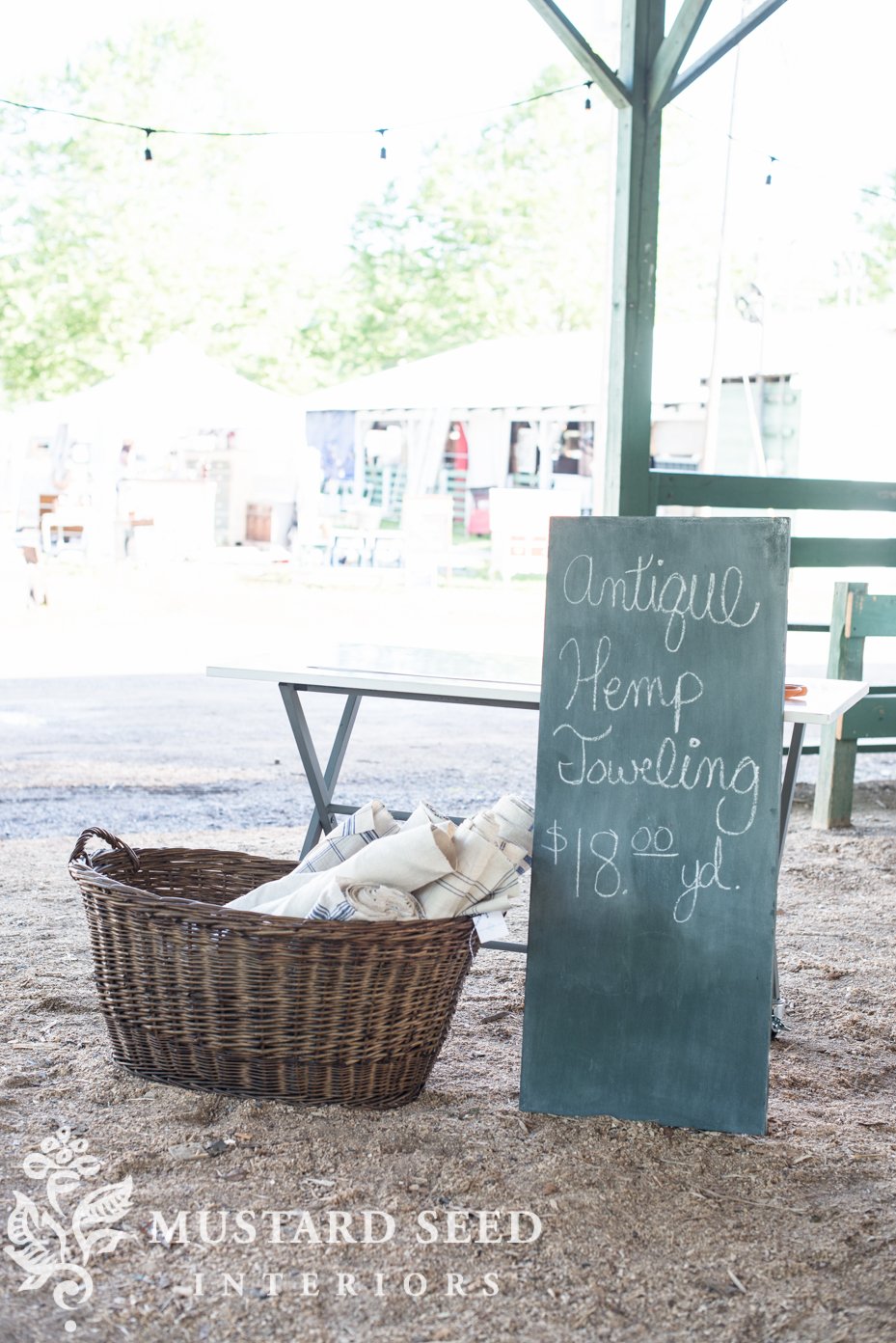 Basically, if you hang around me long enough, I’m going to put you to work!

By the end of the day, we sold about 2/3 of our inventory and had to do quite a bit of shuffling around and staging to get things presentable for our Saturday shoppers. 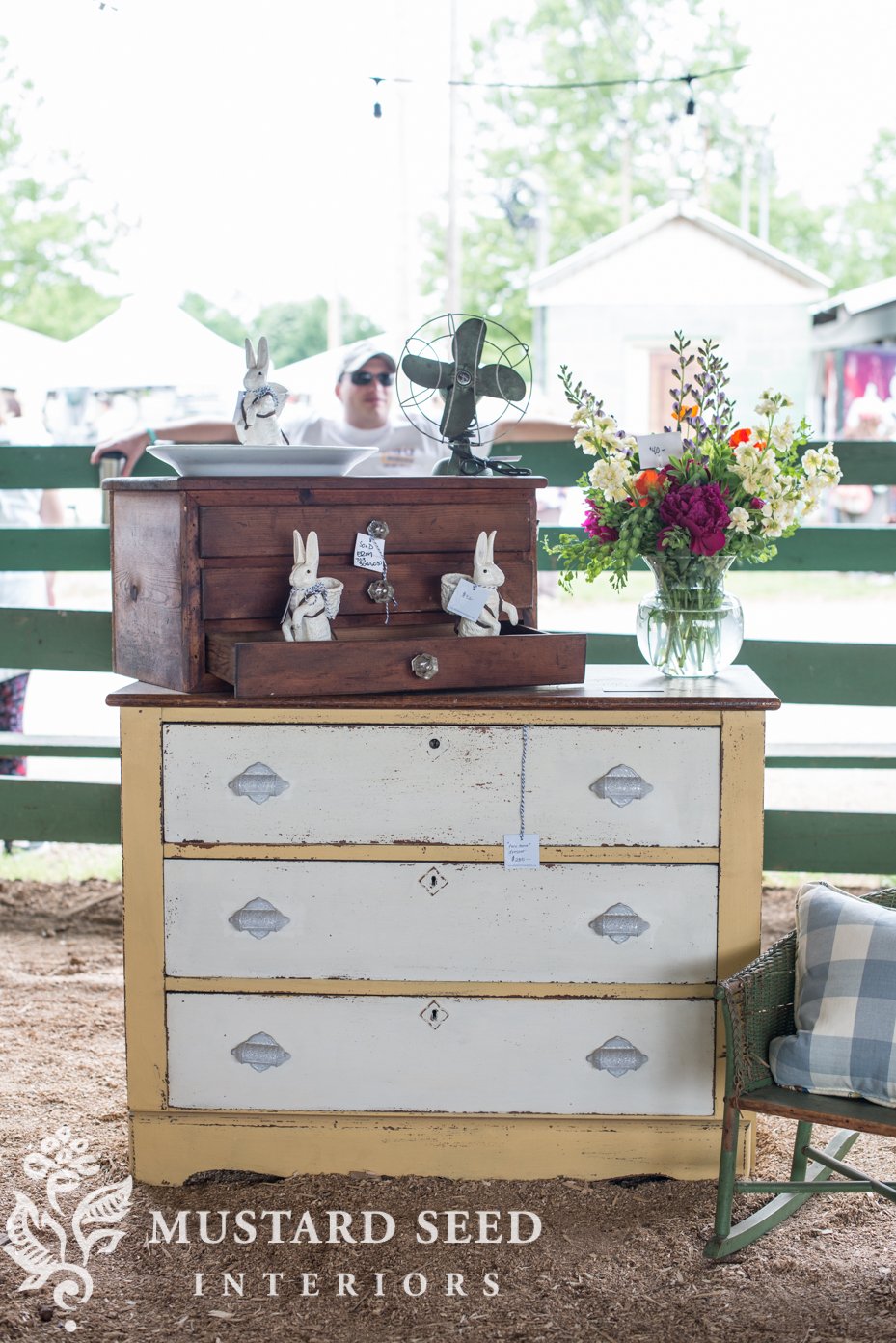 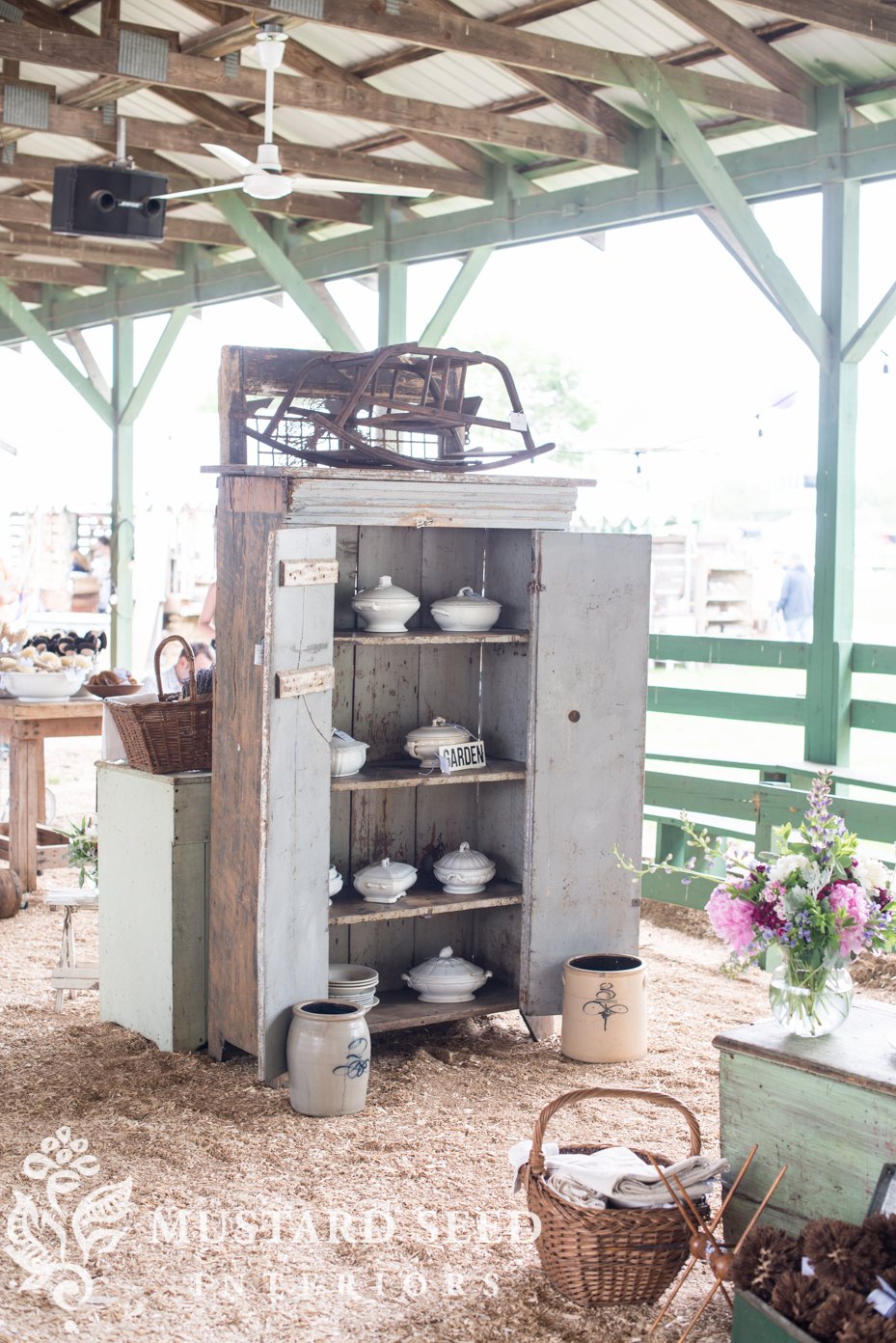 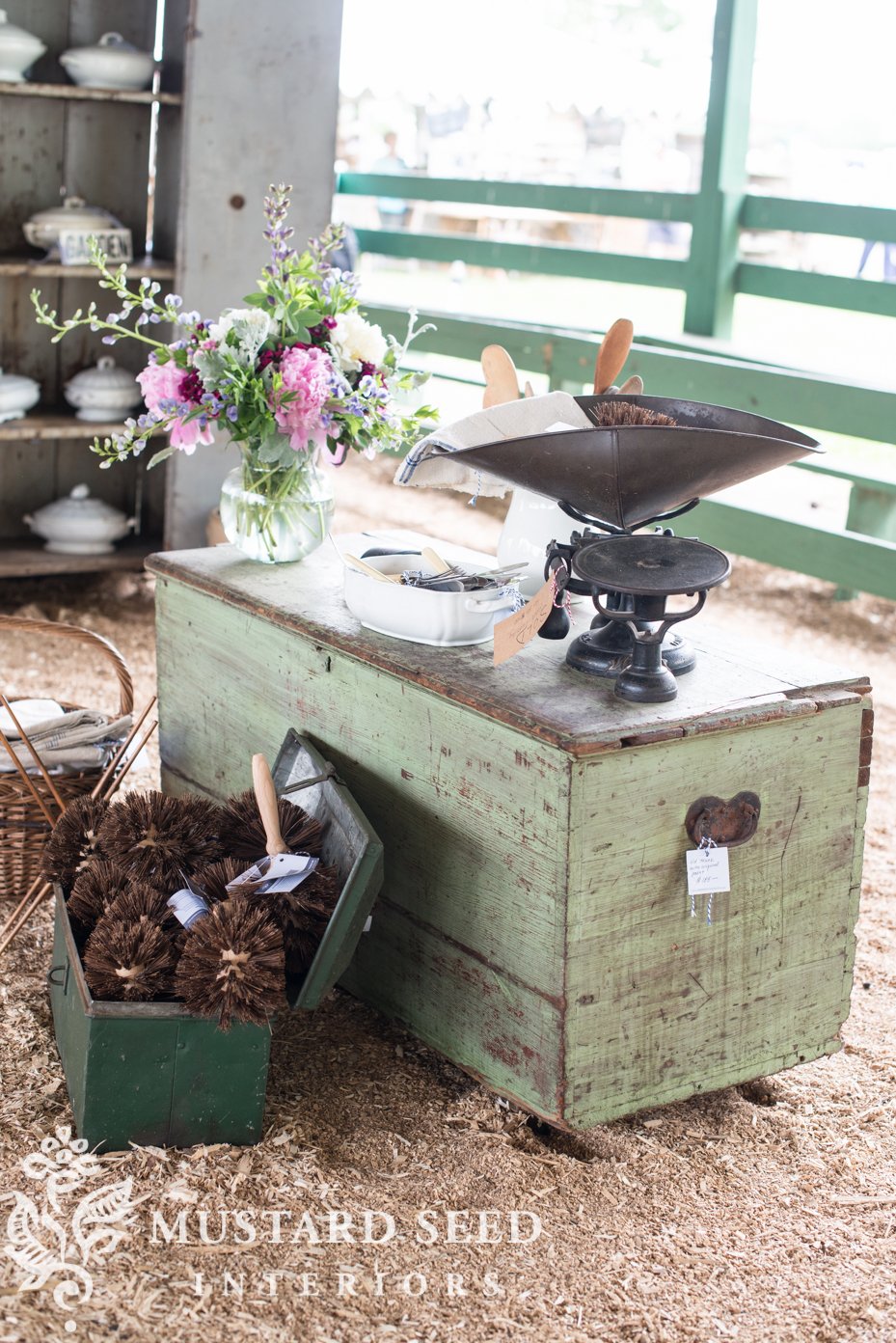 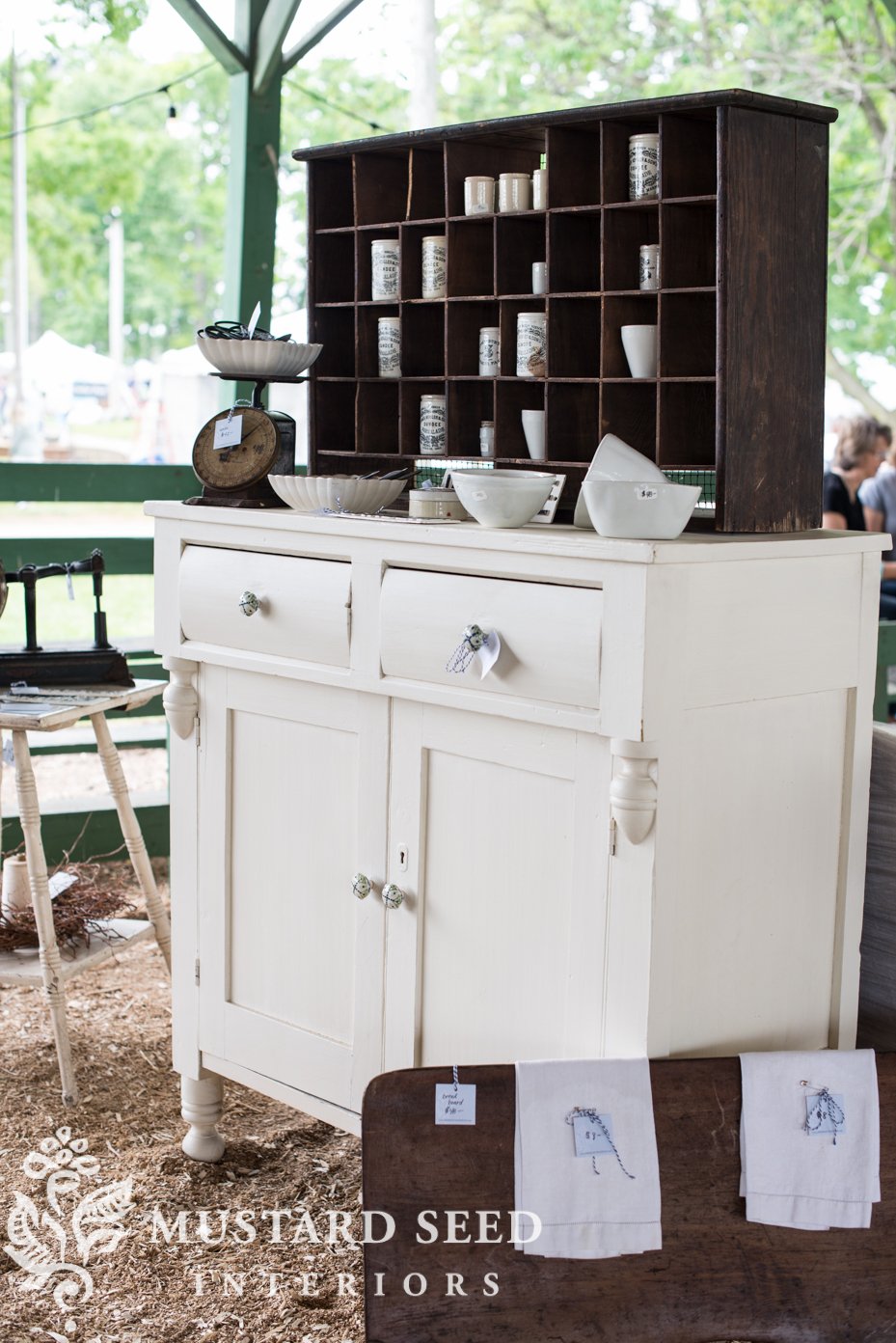 The space looked pretty sparse compared to what it was, but if it was staged in my old 10 x 30 space, it would’ve been a pretty good showing!  It was all I had, though!