I have a soft spot for antique chairs and I have bought many over the years.  The majority of the chairs in our home are old.  I have learned, though, that when it comes to the chairs our family sits in every day for meals, it’s nice to go with chairs that aren’t petite in scale and potentially rickety. The use of “decorative chairs” in our house over the years has become a joke in our family.  Recently, I told Jeff I passed up a $6.00 French-style upholstered chair at a thrift store and his reply was, “Why?  Was it actually comfortable and you could sit in it?”

Okay, okay.  I earned that, but I’ve gotten much better at making sure you can sit in all of the chairs in our house.

Anyway, in addition to having sturdy chairs, I also wanted ones that were relatively comfortable, with padded seats and backs, since we host a weekly small group at our house and often need to pull the chairs into the living room for extra seating.

So, not long after we moved here, I purchased THESE reproduction oval-back French chairs in Linen from Wayfair.  I knew that the light-colored upholstery wasn’t going to last long and planned to slipcover them and customize the backs from the beginning.  You can find the tutorial for the slipcovers HERE and for upholstering the backs HERE. 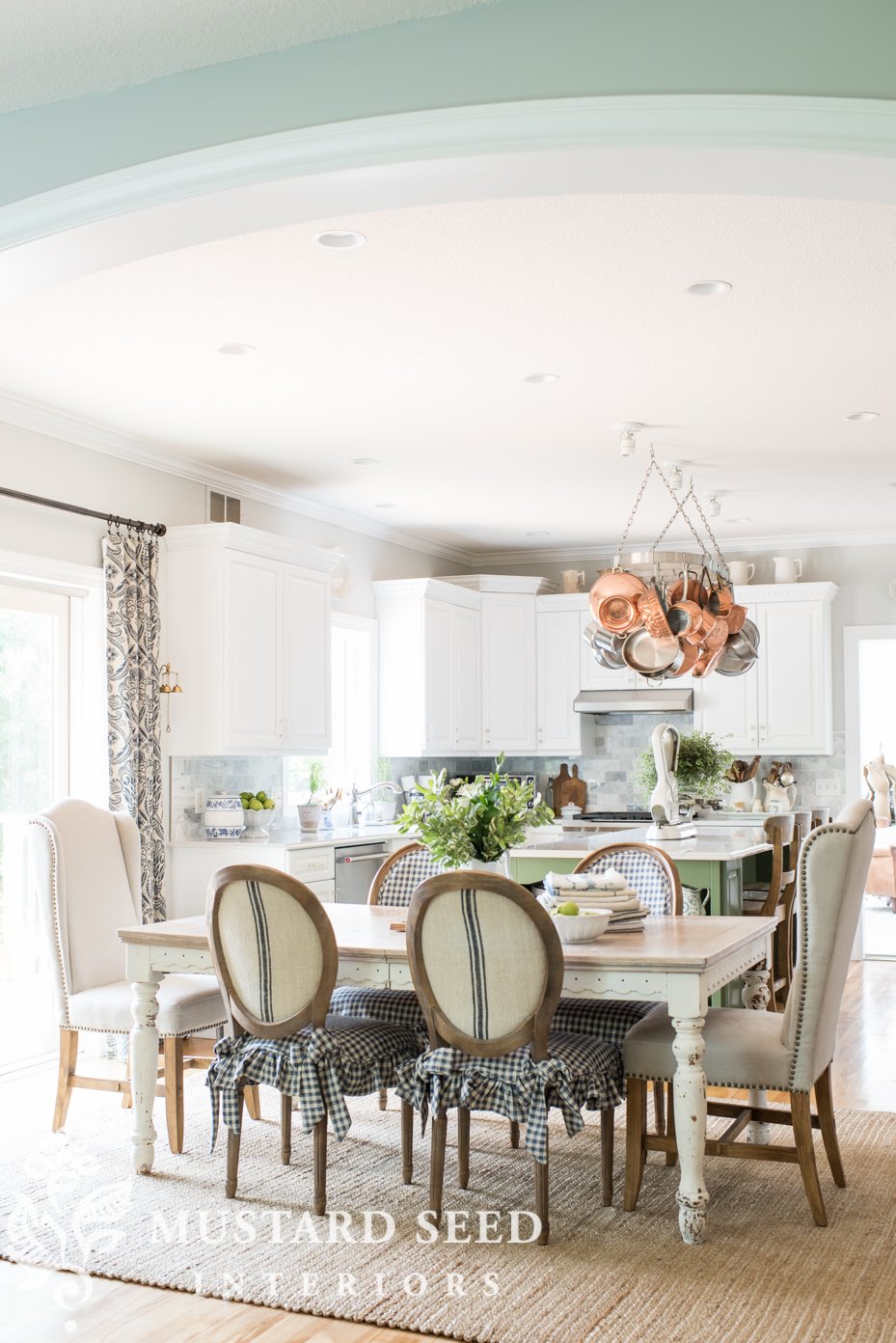 After a few months of trolling around, I landed on the Daphne Upholstered Dining Chair, also from Wayfair.  Now, when I ordered them, the listing was $400 for a pair of chairs and now the listing is just for one.  I originally only received one chair, but they sent me another one when I pointed out the discrepancy in my order, so I think it was listed incorrectly and I ended up benefitting from that. 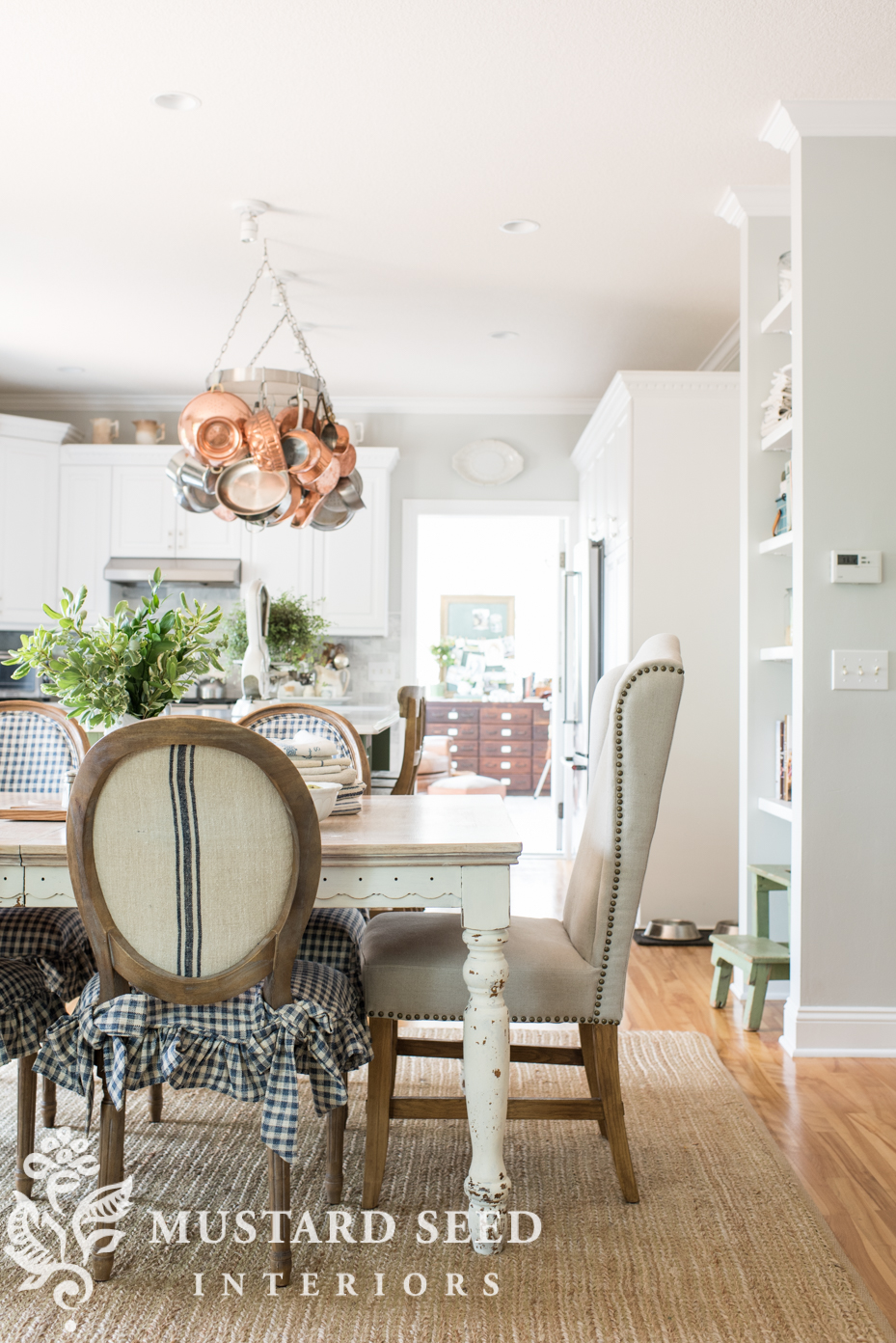 It turned out to be a good deal for me, but it is a bummer when I’m sharing the source and the chairs cost twice as much as when I bought them.  Sorry about that!

I did find THESE CHAIRS for $160/each, though, and they are a similar style. 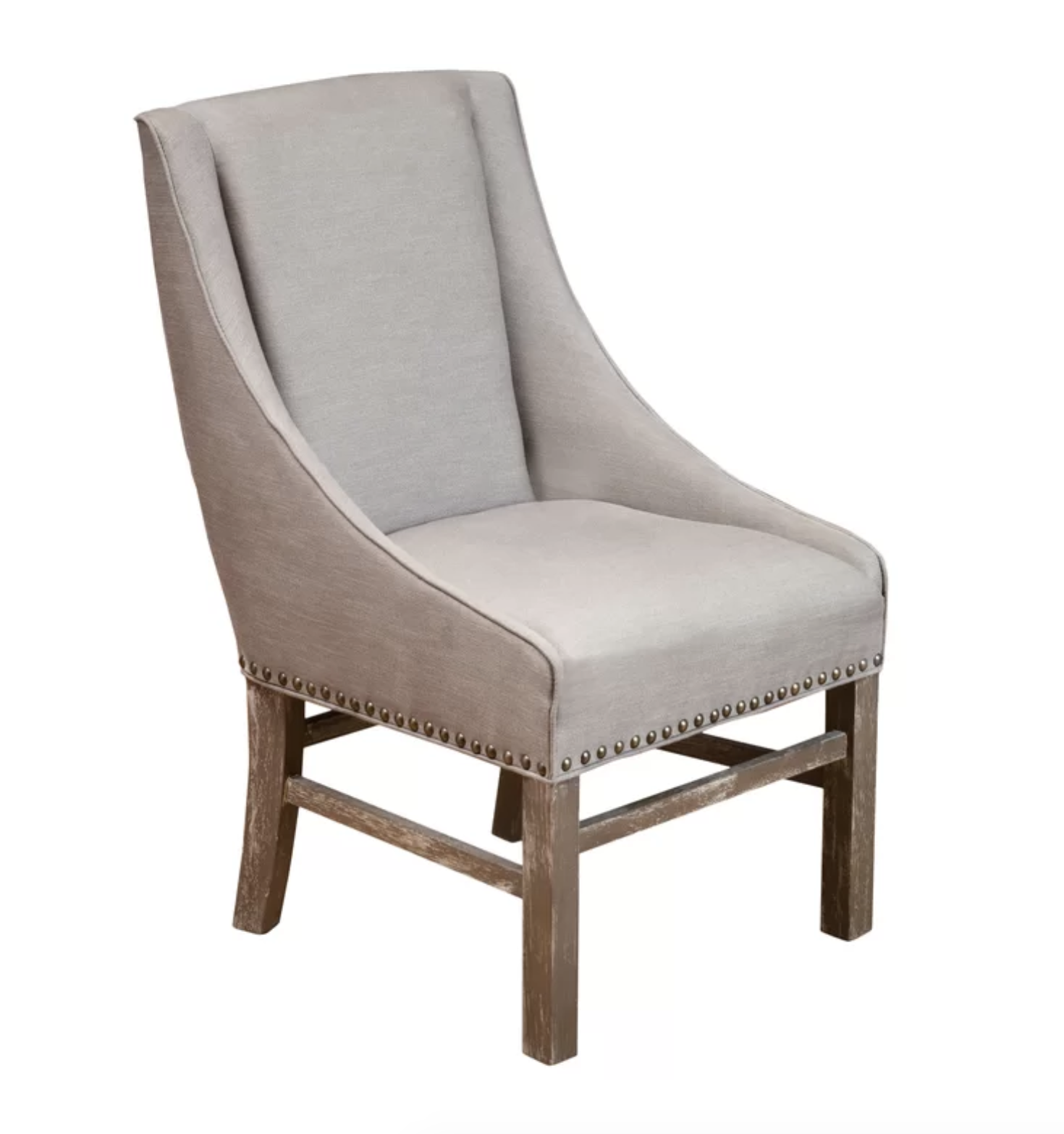 I am planning to make slipcovers for these chairs as well, but not out of the checkered fabric.  Again, I want them to have a look that’s coordinated with the side chairs, but not matching exactly.  They’ll stay as is for now, since I have other projects already in the works. 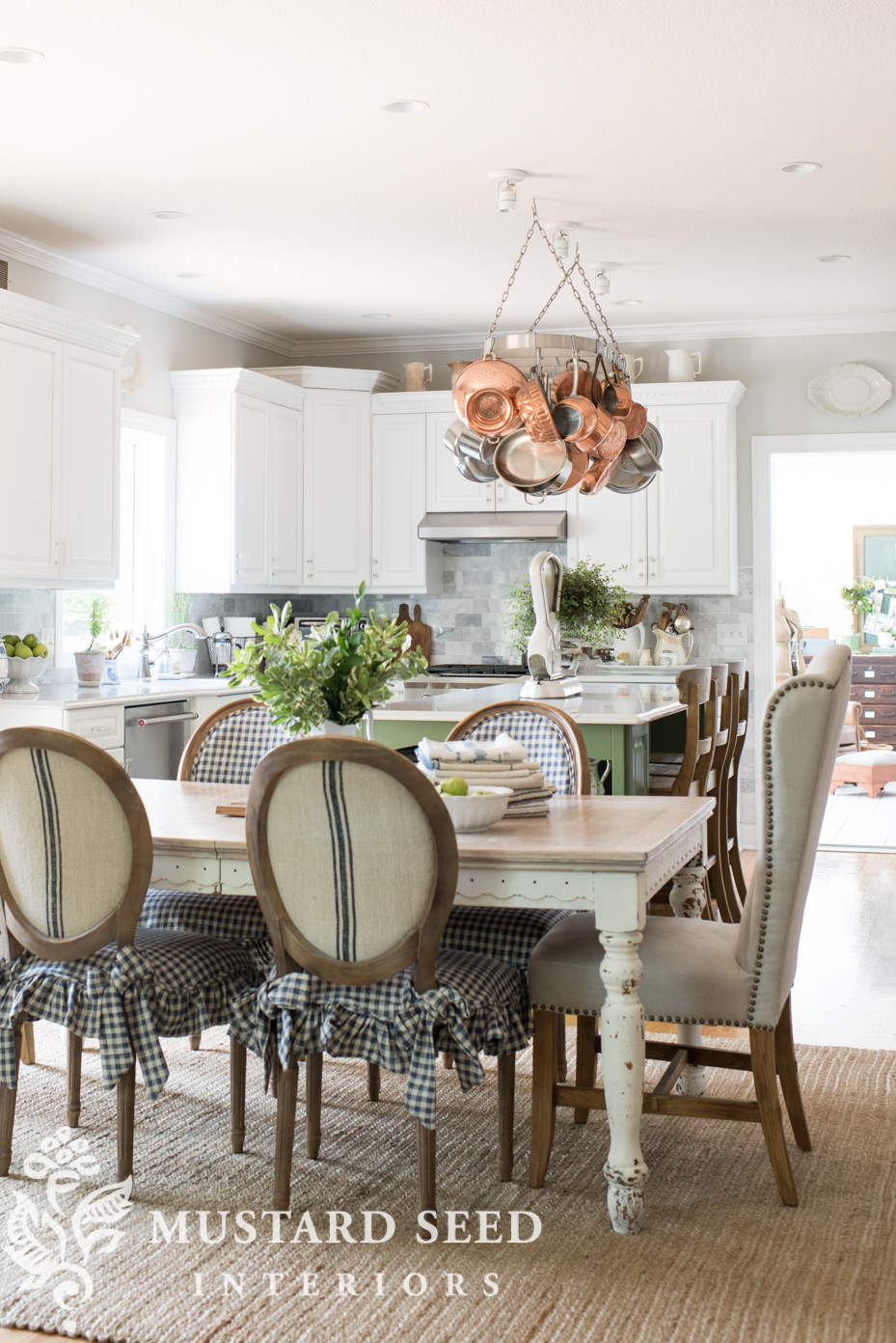 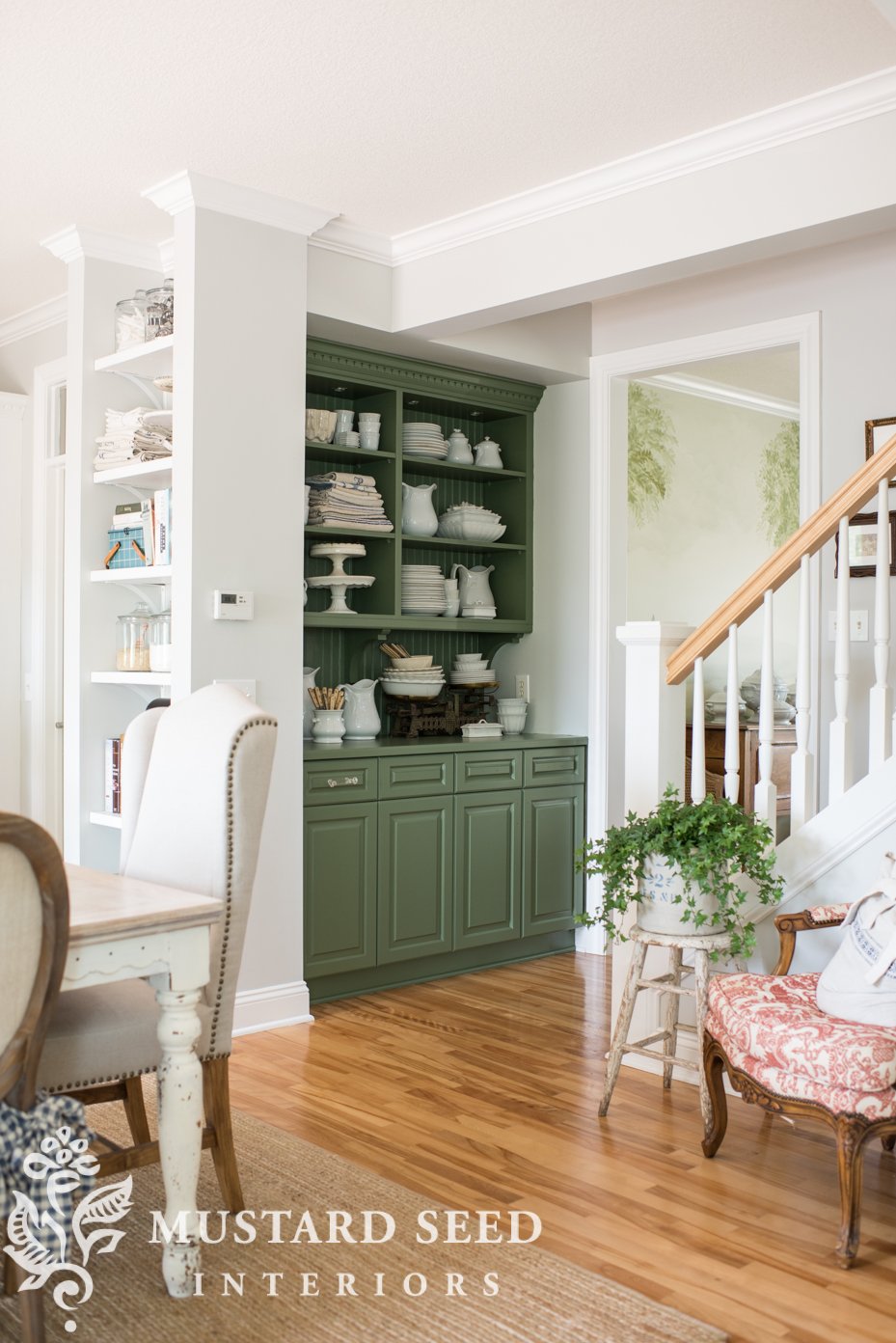 I know some of you love the addition of red to the room, but it doesn’t work for me, especially with the boxwood island and butler’s pantry.  Also, you can’t really see it in the pictures, but the fabric is pretty stained and worn.  It really is time for a refresh.

I already started pulling out all of the nail-head trim and I’ll share how I reupholster these when I’m done dismantling them!

Disclosure: This is not a paid sponsored post, but I did purchase these chairs with gift cards I’ve received as compensation for my participation in WayFair and Joss & Main advertising campaigns.  This post contains affiliate links.