I thought I would share a little bit more about our time at Isle of Palms this year.  If you’d like to read about our trip last year and the things we did, you can check that out HERE.

Of course, the highlight of our time at the beach for me is always walking along the beach, collecting shells.  I will write a post sharing how to decorate with shells, showcase some of my favorite finds, and share what catches my eye.  You can read my tips on shelling at Isle of Palms HERE and see who won the shell collection competition of 2022 HERE. 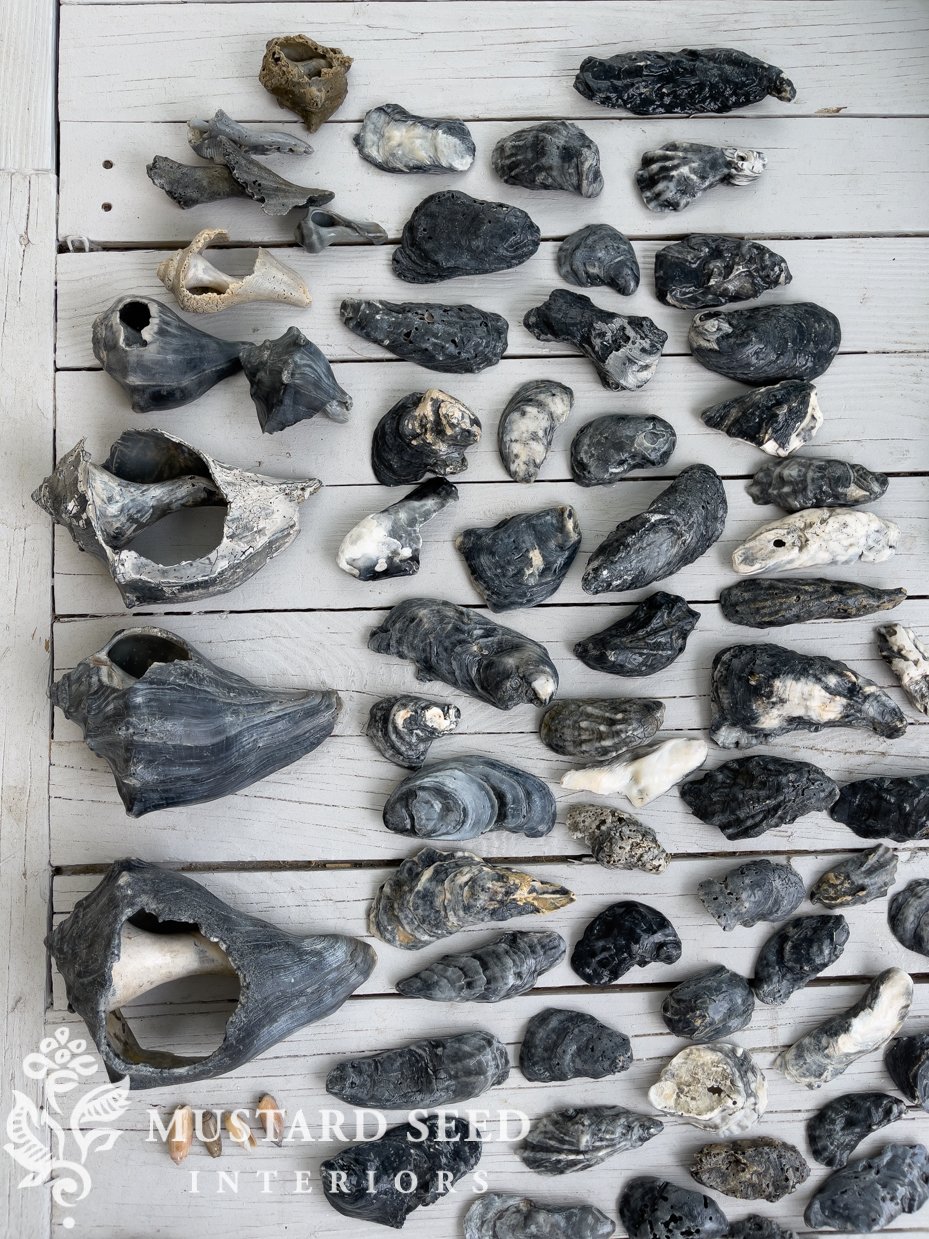 The contest was just a bit of fun, but I love the shells I brought home.  They are still sitting in bags because I’ve been preoccupied with packing, but I am looking forward to painting some of them as subjects and using them for various projects.

I will admit that when I was shelling, it was a bit like shopping while hungry.  I had been looking forward to it all year, so I picked up any and all shells that caught my eye!  I will put them all to use, though.

So, let me share about the house, since several have asked.  We stayed in a different house on Isle of Palms this year so that we could have a heated pool.  We stayed in May of last year and the pool water was cold even then.  We knew it would be frigid in March.  As an aside, I loved the weather in March.  I hate sitting on the beach when it’s sweltering.  I just melt.  But the air was crisp and cool and perfect for me most days in just a sweatshirt or a light linen dress.  I even waded in the ocean and it was tolerable.  Cold, but tolerable on a sunny day.

HERE is the information on the house we rented last year… 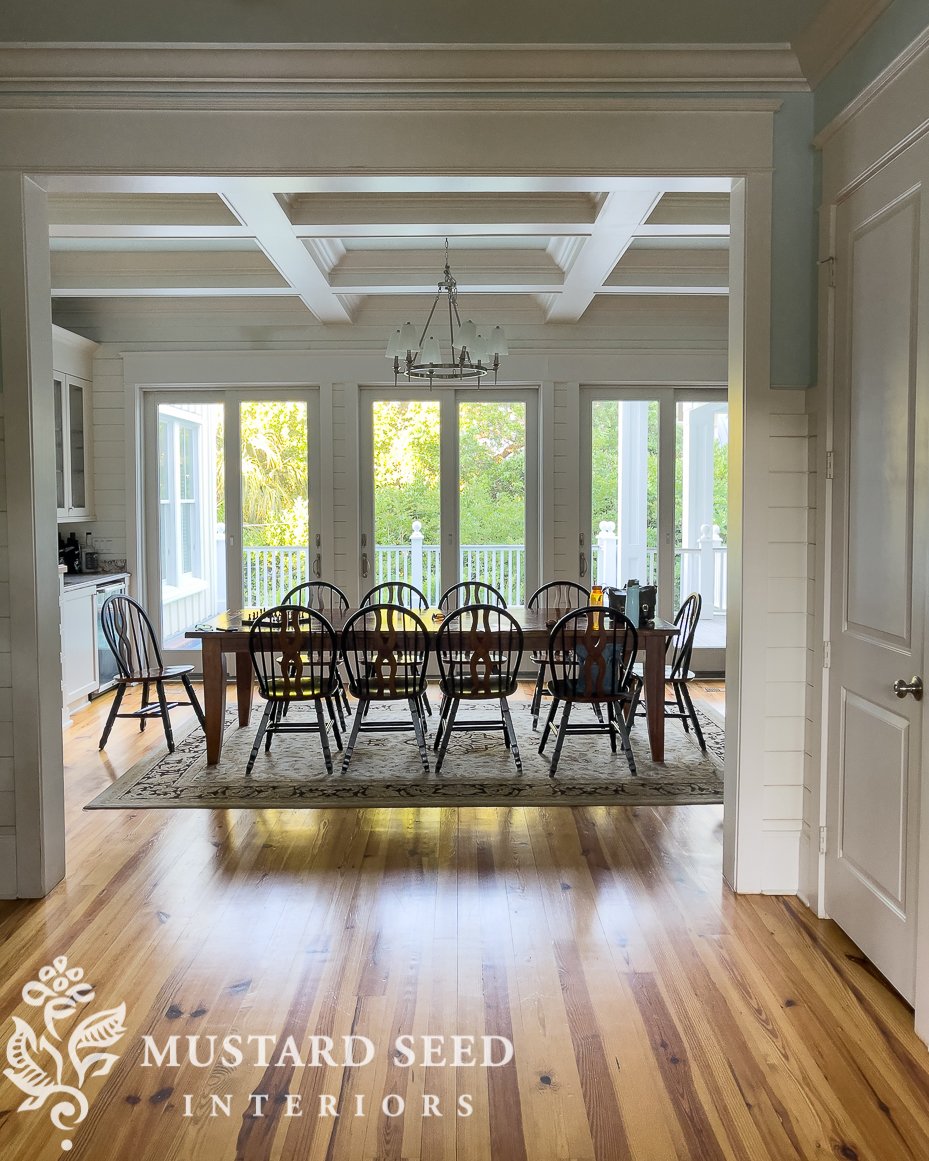 THIS is the house we rented this year… 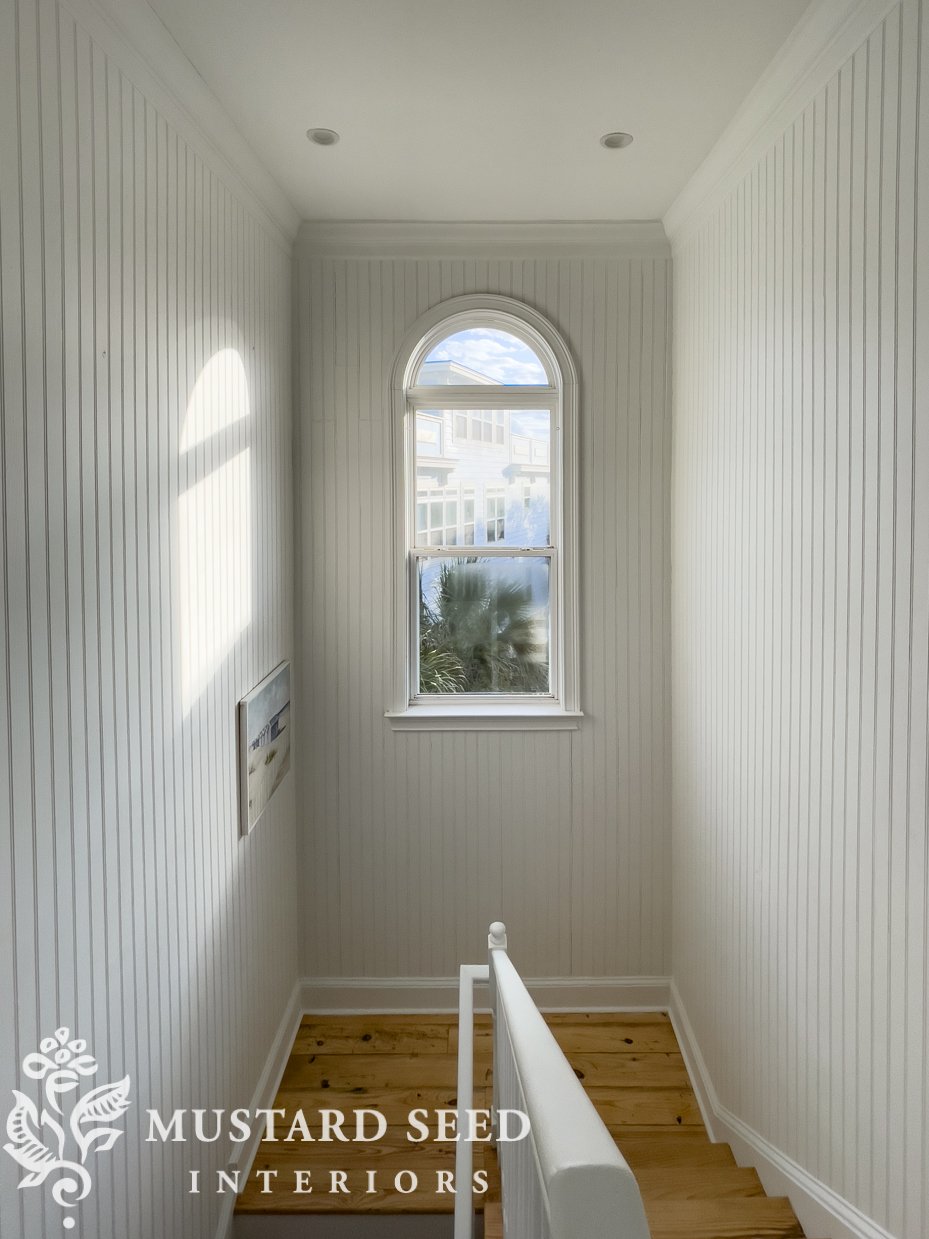 Both houses are wonderful places to stay, so we’re really comparing awesome with awesome and it’s just a preference as to which house is more your speed.  The house we stayed in last year was preferred by most of our group.  We liked the beach better, how the house was situated (surrounded by trees), and the public living spaces, which were larger.  That house also had a pingpong table in the basement and a den upstairs, offering nice options for playing games.

The house we stayed in this year on Ilse of Palms had a large, heated pool that the boys spent lots of time in.  I enjoyed sitting out by the pool as well, reading books, and judging jumping competitions. 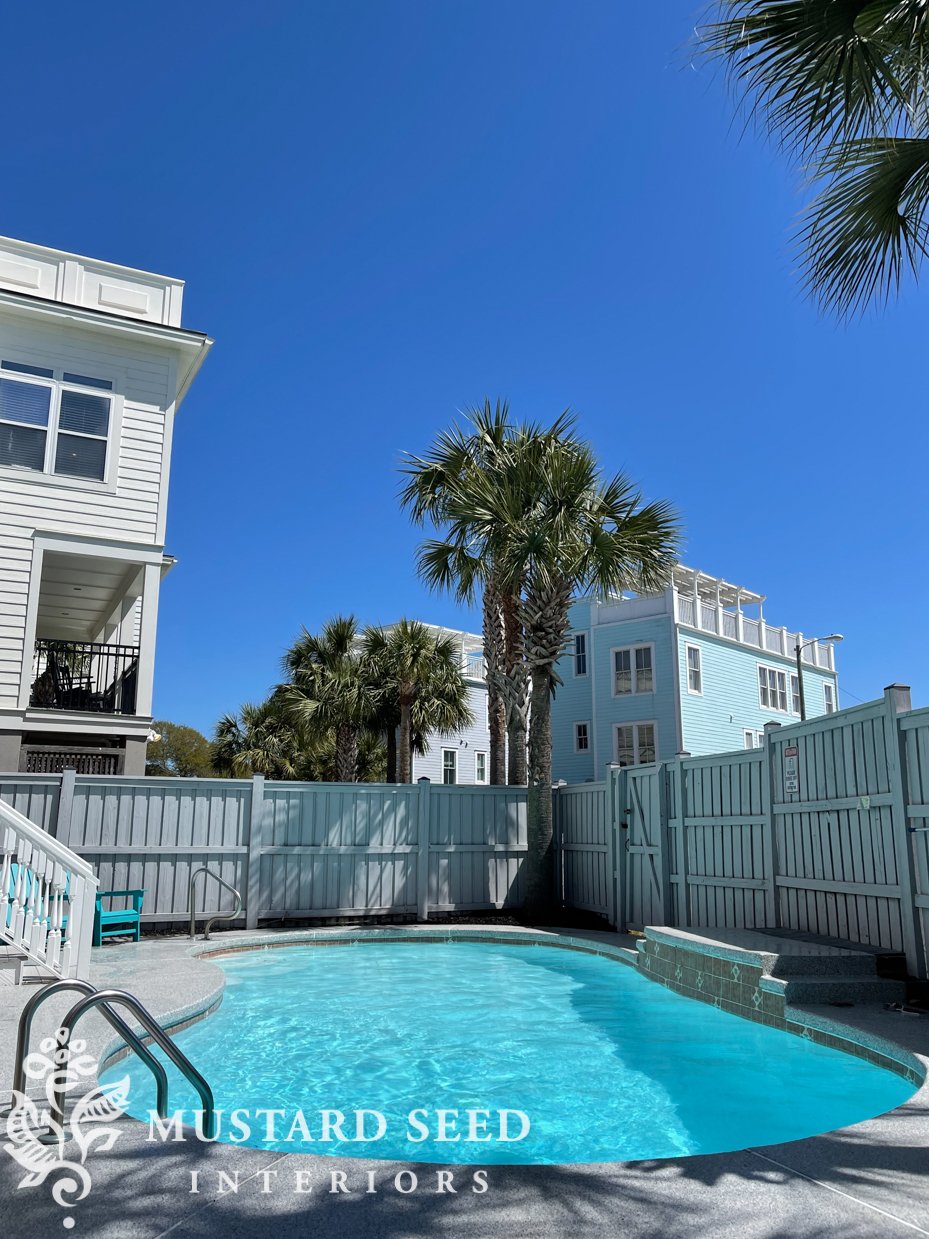 The house we stayed in this year offered more sleeping accommodations, had new/comfortable mattresses and sofas, and a nicer pool, as I mentioned.  This house was also situated in the heart of the island and was within walking distance of restaurants and shops.  It was also a little closer to the beach, but not by much.  This beach was friendlier to walkers in that it was flatter and you didn’t have to walk as far to get to the surf.  The parking by the beach access was for golf carts only, though, and it wasn’t as good for shelling.  I did walk pretty far on that beach and ended up finding some nice shells, but not as many as on the other beach, and there were a lot more live shells.

This house definitely felt a bit more like a “party house.”  You could hear the bands and bustle from the restaurants and bars nearby.  The decks overlooked a parking lot and stores, so it didn’t offer a very nice or relaxing view.  The most entertaining view we had was when a car was towed and the tow truck driver couldn’t get the wheels to lock, so after many attempts, he just put the car back where it was.

So, I think if you prefer a quieter part of the island that’s a longer drive from stores and restaurants, the 2021 house would be your pick.  If you’re staying with a group of friends and you want to hang by the pool, walk to grab an ice cream, and be able to walk to a variety of places for meals, the 2022 house would be better for you.  Both houses have elevators, hotel-style rooms with private bathrooms, a washer/dryer, and a pool, and are about 1-2 blocks from the beach.

Last year, we hauled our beach chairs and umbrellas out to the beach, but my mom finally decided to rent chairs and an umbrella.  It’s a small thing that made trips to the beach so much more enjoyable.  We knew that chairs and a well-planted umbrella were waiting for us anytime we wanted them.  So, she had them set up again this year. 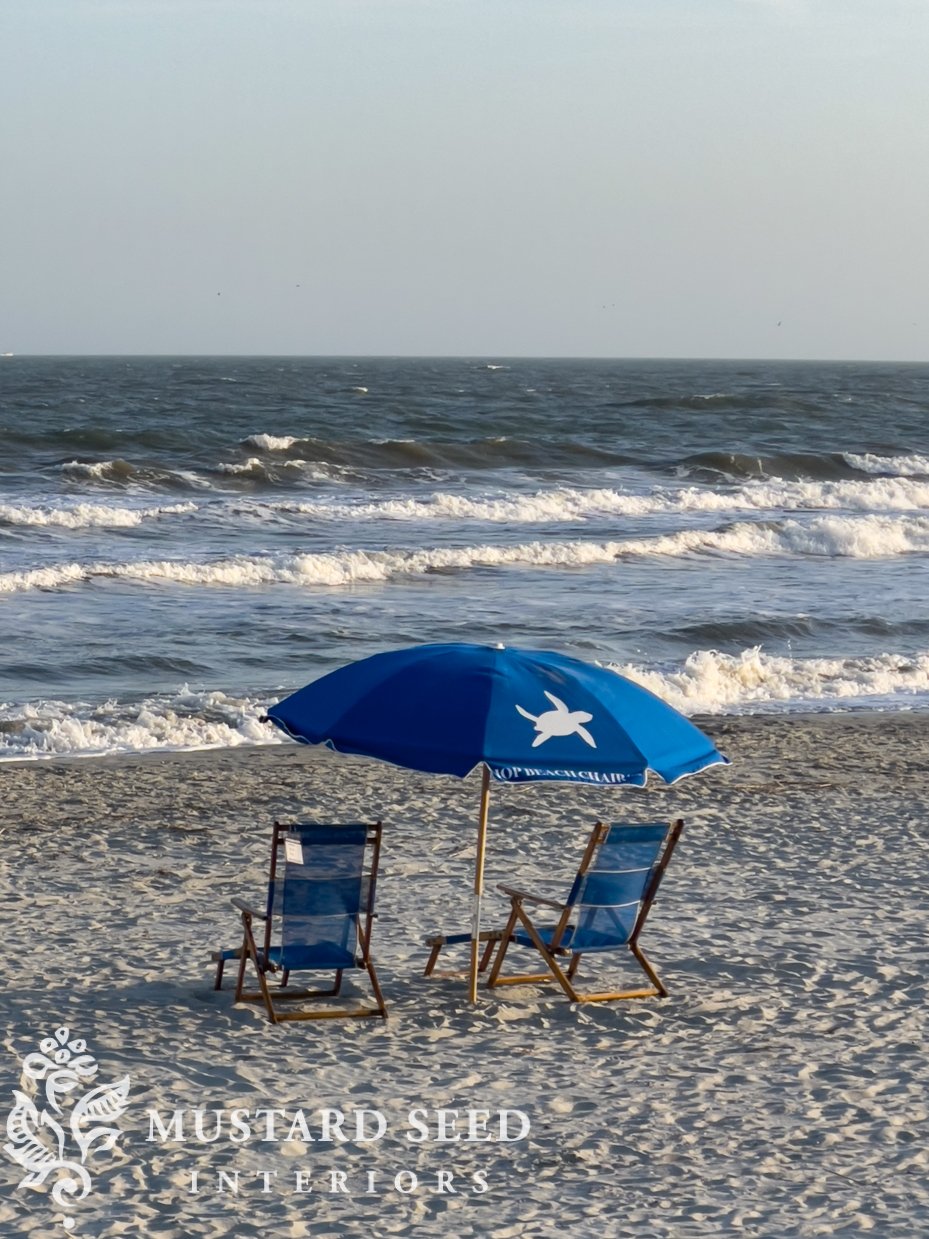 We ended up spending more time at our “old beach” because it was much better for shelling, but most people in our party spent some time in the beach chairs.  When we were leaving them for the day, we would tell a nearby family or couple that they were welcome to use them.

We did have one mishap with the umbrella, though.  It was a particularly windy day and my mom and I were sitting out, reading our books.  We had been there for over an hour without incident, so we were completely caught off guard when the umbrella suddenly took flight.  First of all, it’s amazing it didn’t hit me in the head, but it must’ve flown straight up and then proceeded to careen down the beach.  My mom and I looked at each other stunned for a moment and I realized that, since I was the daughter in this scenario, I needed to run after it.

I popped out of my chair and started after the umbrella.  My main concern was it was going to hurt someone.  This is a heavy wood and canvas umbrella and was set on a path that would’ve caused some destruction.  “Look out!!”  I yelled into the ocean wind.

Fortunately, the wind took a turn and blew the umbrella towards the ocean where it landed in the surf, safely away from people sunning in beach chairs.  I arrived at the edge of the ocean, out of breath.  I looked a minute at the umbrella and back at my mom.  I held my arms up, silently asking if I should go into the ocean after it.  She waved her arms at me in reply, indicating I should go get it.  I pulled up my Capri legging and held my linen dress up as I went tromping through the surf.  The wind pushed the umbrella just a little further.  I felt like a cat playing with a laser pointer.  The umbrella always went just a little more out of my reach just when I thought I had it.  I sloshed through the water, dropping my dress and not worrying at all about getting wet at this point.  If I didn’t grab this umbrella, it would be lost to the ocean.  I dove for it and caught a corner of the fabric, enough to keep it from flying away again.

While all this was happening, the group of sunbathers were sitting in their beach chairs, watching the scene unfold.  I rolled my eyes and thought to myself, “Yeah, I bet this is entertaining.  This is probably going to end up on TikTok or something.”  Some middle-aged lady pathetically chasing down an umbrella to the trending tune Oh No.

The wind tugged at the open umbrella as I struggled to turn it against the wind and close it.  My mom said she thought she was about to witness a Mary Poppins moment as I was whisked away by a beach umbrella.  Fortunately, I got it closed and dragged the umbrella, heavy with saltwater, back to our chairs.  I threw it to the ground and fell back on the beach chair.

We were a little more cautious when opening the umbrella during the windiest part of the day!

In the evenings, we would play games and one night, we did a drawing lesson together.  We watched a few of the videos in THIS Domestika class and my mom, my great uncle, Calvin, and I drew in our sketchbooks. 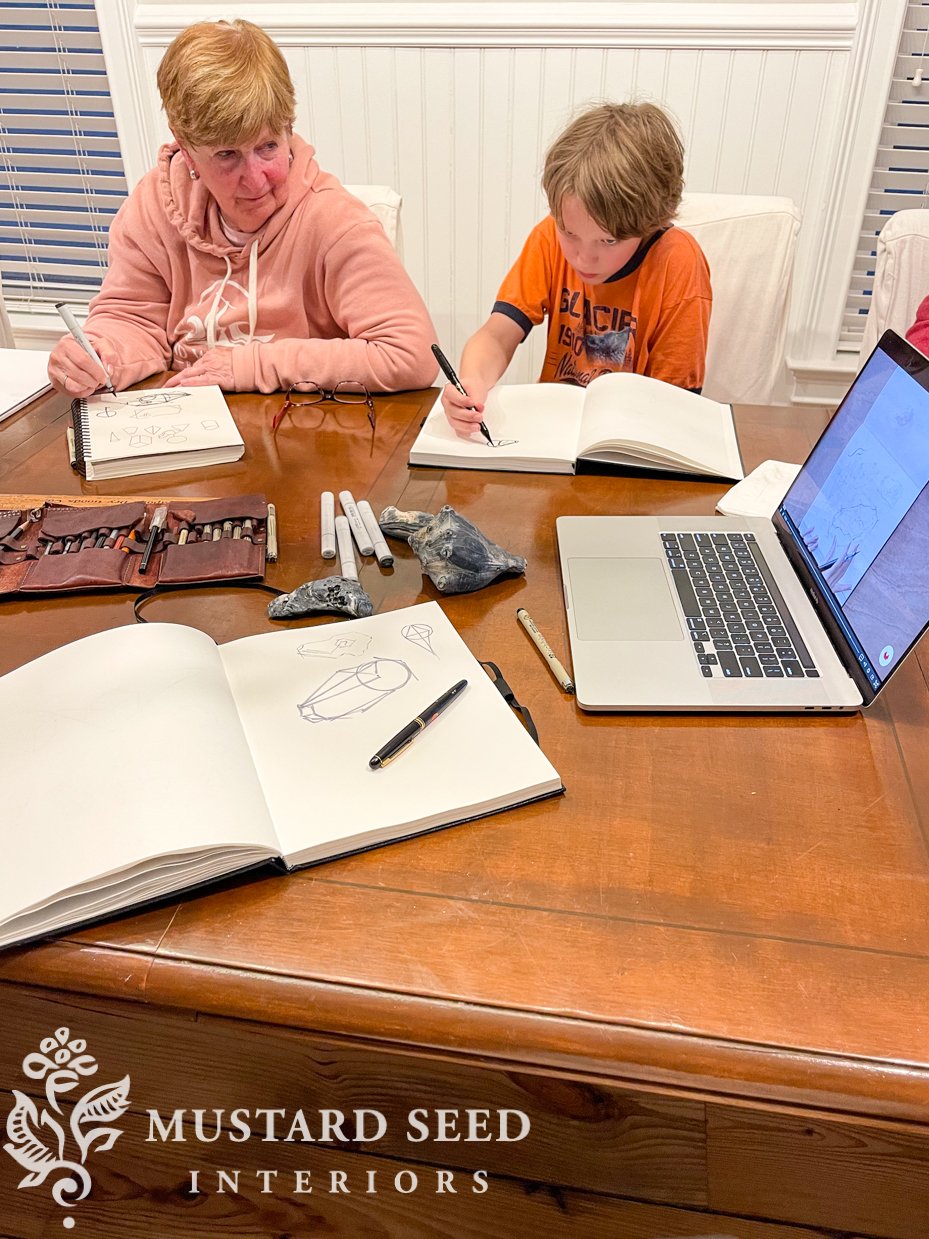 We followed the course for a while and then drew things in the room – shells, chess pieces, paint tubes, my dad’s pocket knife, etc. 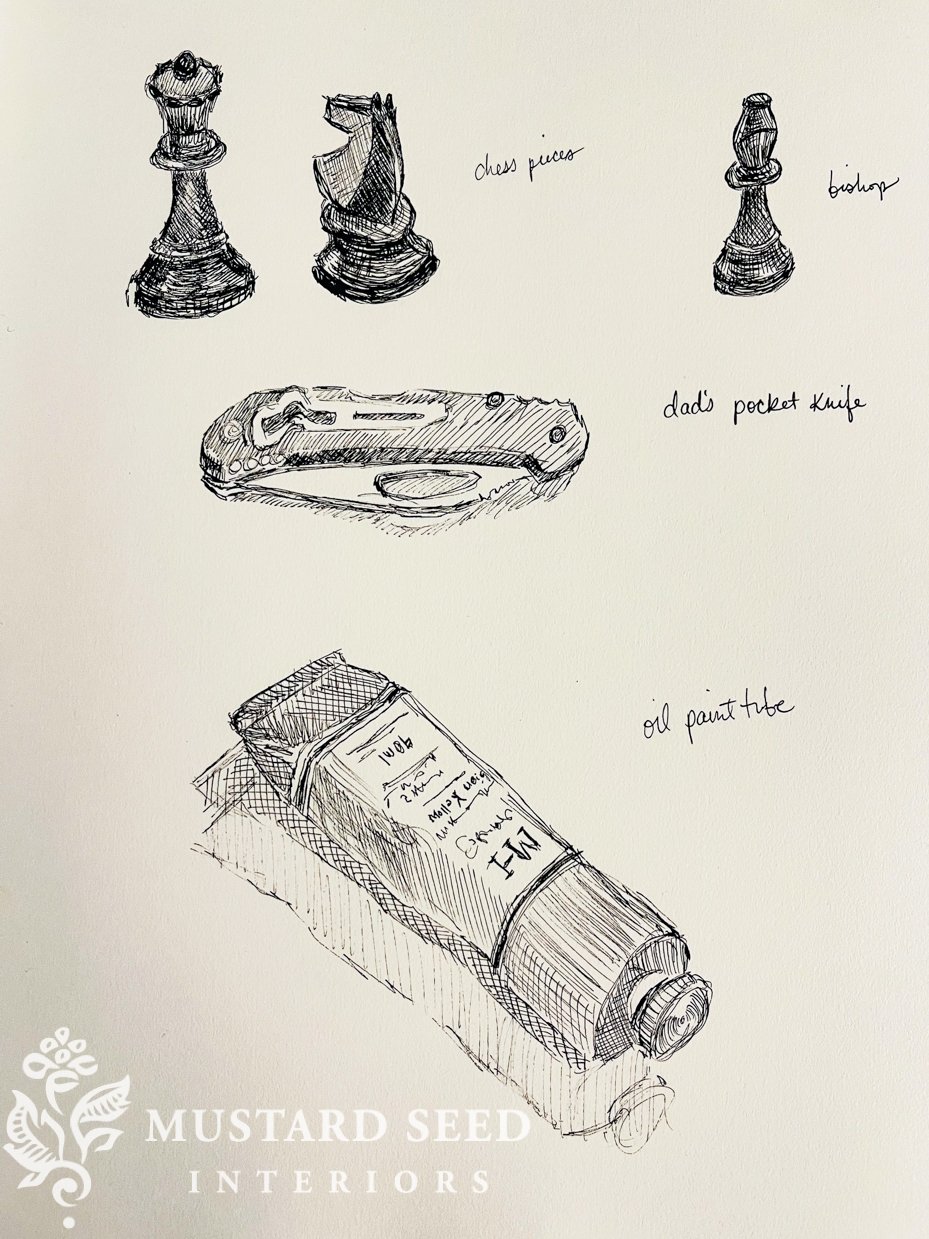 We also played the game Telestrations, which is so much fun.  It’s a combination of Pictionary and the old gossip game of Telephone and it’s a riot.  We all laughed so hard.

The men of the house went to Sea Biscuit most mornings to get breakfast while we were out shelling or walking on the beach.  They would bring us back biscuit sandwiches, which were delicious.  The ladies decided we needed to do a meal out, though, so we went to The Long Island Cafe to have a ladies’ lunch and then went to The Village Bookseller at my request.  Everyone in our group enjoys books, though, so I didn’t have to do too much convincing.  It’s a sweet little book shop and everyone bought a book except me!  In fairness, I already have a lot of books, so most of the books that would interest me were ones I already owned. 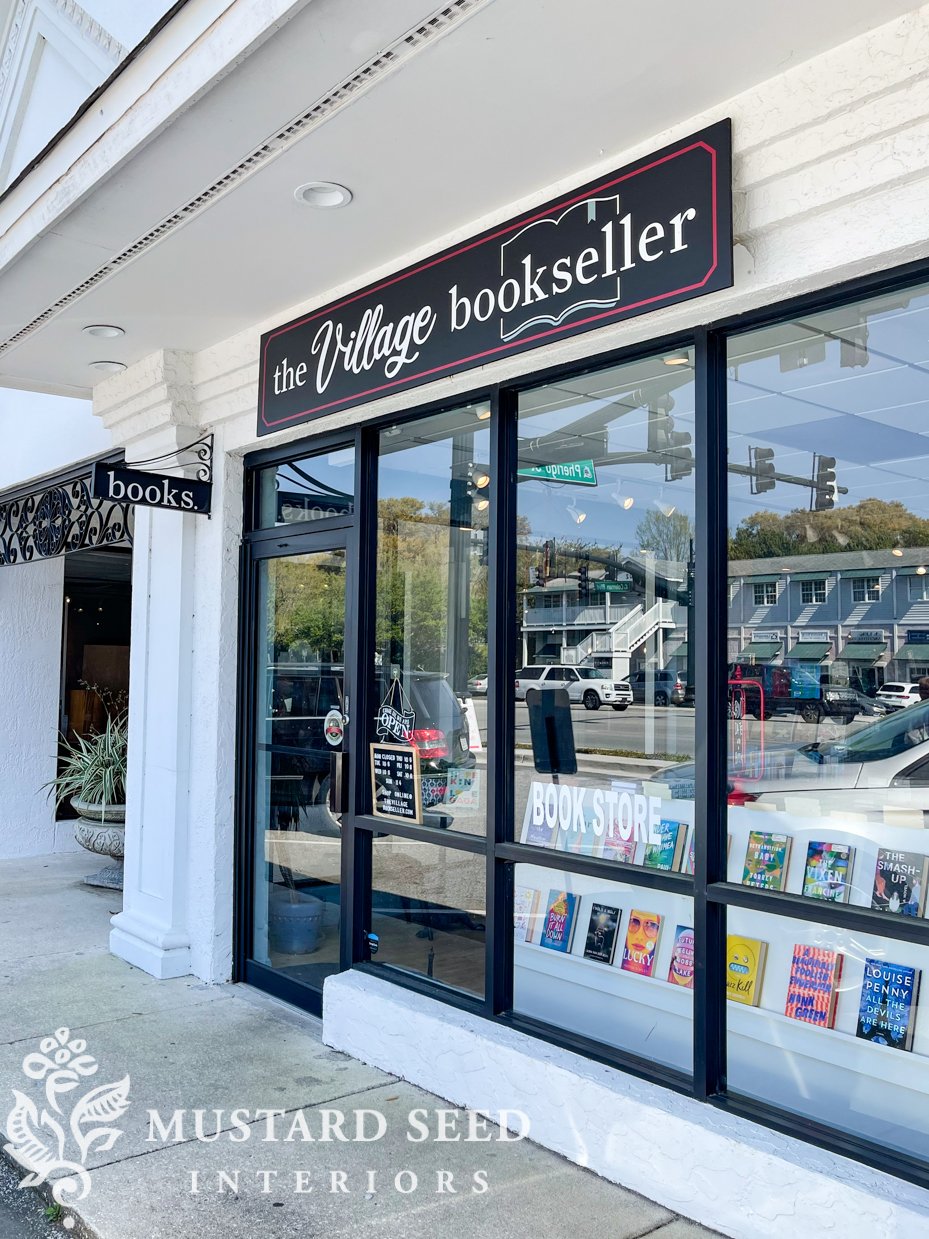 I was tempted by their “blind date with a book” section.  Isn’t that such a fun idea? 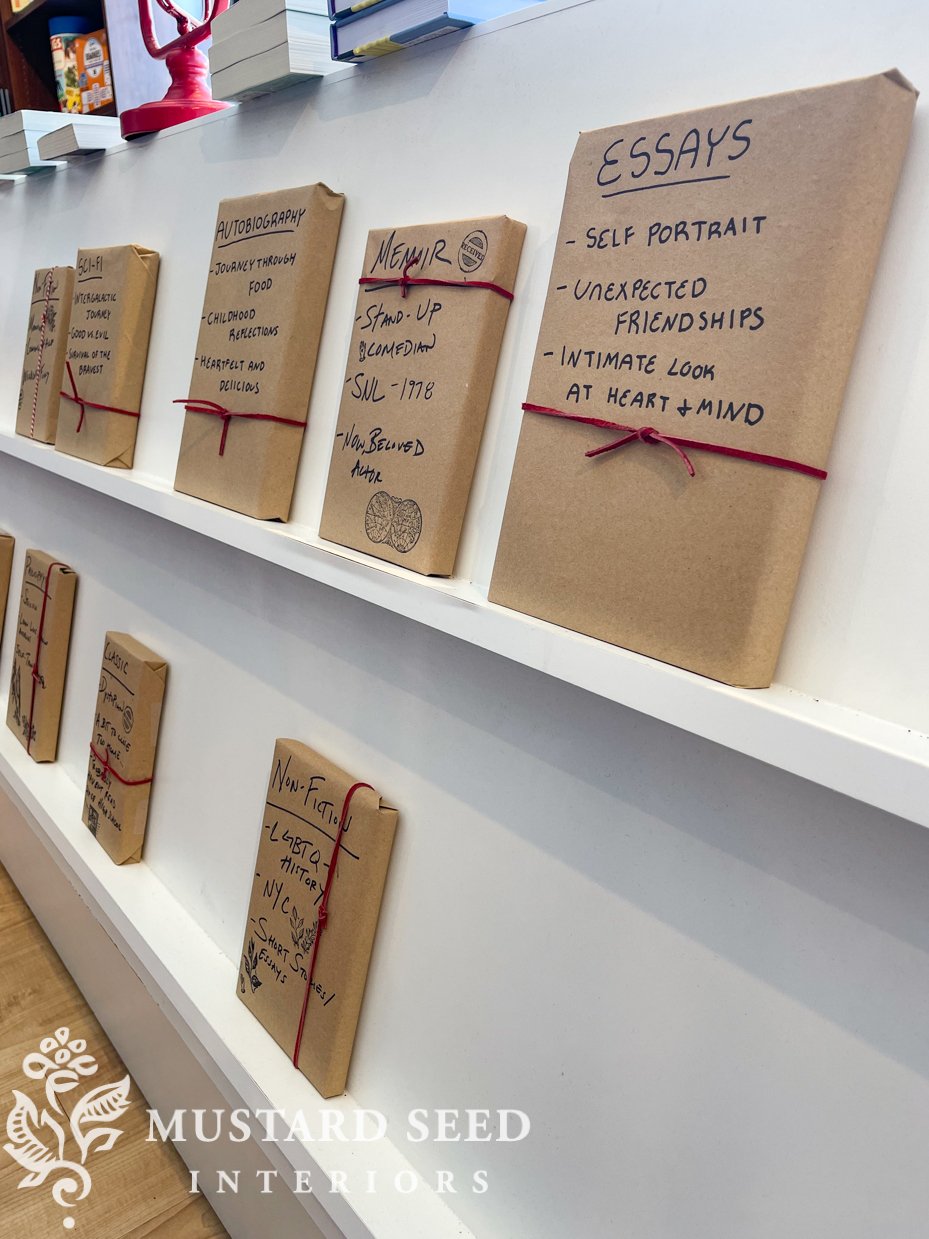 We also toured my great aunt’s beautiful house and I’ll share about it in another post.  She has amazing taste and is a talented decorator.  I got permission from her to take photos and share them here on the blog. 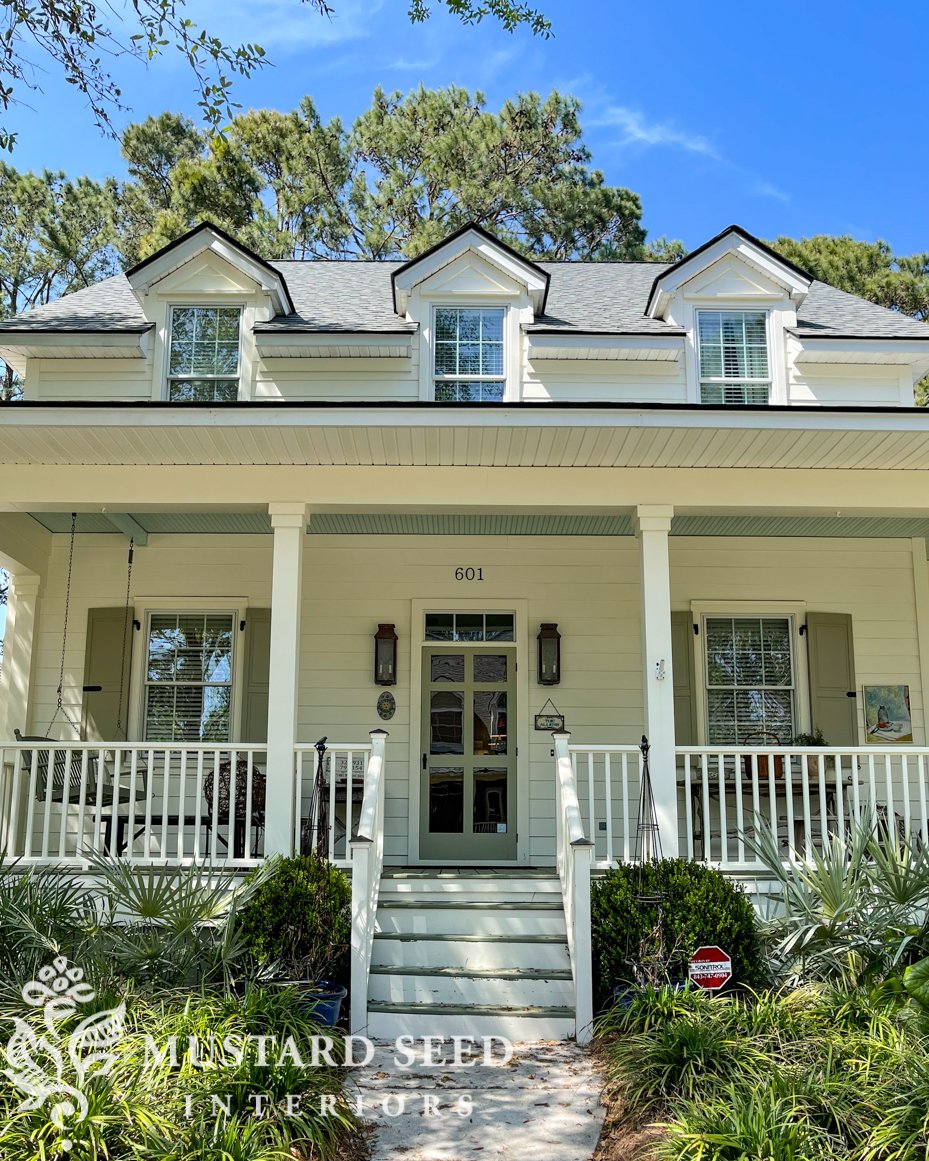 Another highlight of the week was my birthday dinner at Acme Lowcountry Kitchen.   It was a short walk from our house on Isle of Palms and we had heard good things about it, so we went there.  Oh my…everything was so amazing.  I got the crabcakes and grits and was just in heaven.  Jeff ordered the fried grits appetizer, which I was a little skeptical of, but they were mouthwateringly good.  It made me wonder if I could make fried grits at home.  Everything was over-the-top good. 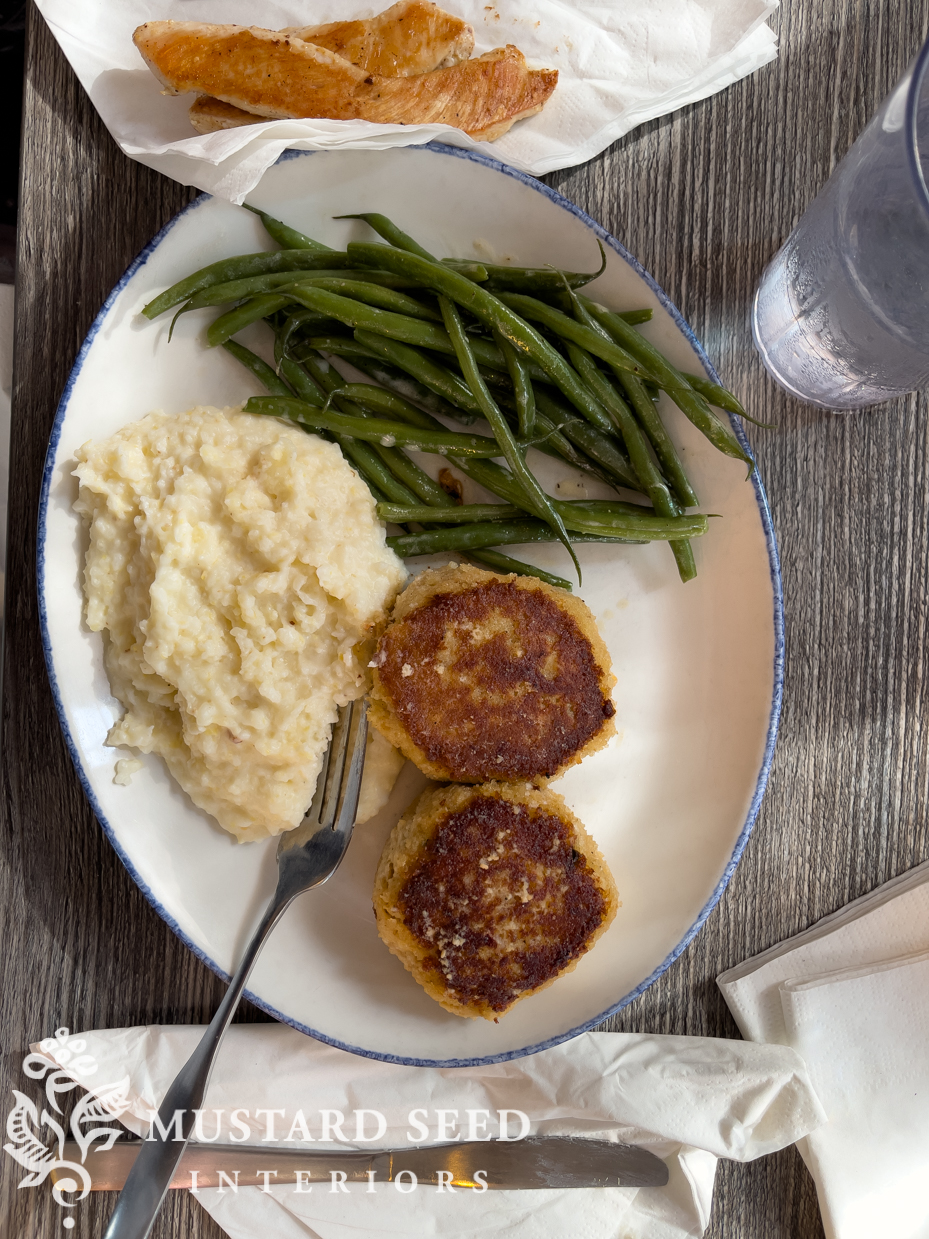 We didn’t go to Charleston this year, but the men went to see the Hunley, a recovered Civil War submarine.  I really just wanted to spend time on the beach and with family.  With all of the wonderful diversions there on the island, there wasn’t much need to venture out.

Since we’re moving this year, we’re not sure if we’ll go back next year, but spending a little time at Isle of Palms is becoming a bit of a family tradition.

PS – I was able to get a post up today, so things are running better on my site.  It’s still loading slowly, but that should be resolved by tomorrow.  Thanks for your patience as we do a little bit of virtual housekeeping.