installation of the new kitchen counters

Disclosure: This post is sponsored by HanStone.  All opinions and words are honest and my own.

Monday was the day and it was like counting down the days to Christmas.  I think HanStone needs to make an advent calendar to countdown to counter install day.  Filled with dark chocolates and bite-sized samples of coordinating backsplash tile.

Anyway, before the install could happen, our fabricator and installer had to come to the house to measure for the new counters.  We used a local company, The Pinske Edge in Rochester, MN.  (And, just to explain, the material for the counters was provided by HanStone as a part of the sponsorship, but we paid for the fabrication and installation.)

On the day of measuring, I had to clear off the counters, so they could have full access to those as well as the walls and cabinets.  I was expecting a guy with a tape measure and notepad, but the process is much more sophisticated and precise than that these days.  He used a special tape and flat, rectangular plates with black dots on them in various patterns and sizes.  He then took digital photos of the kitchen and, when imported into the software, all of the measurements can be precisely calculated by the size and relationship of the dots.  This way, they can account for any undulations in the drywall, cabinets that aren’t completely square, etc.

Since our current counters fit well and we liked the layout, they used those as the template. 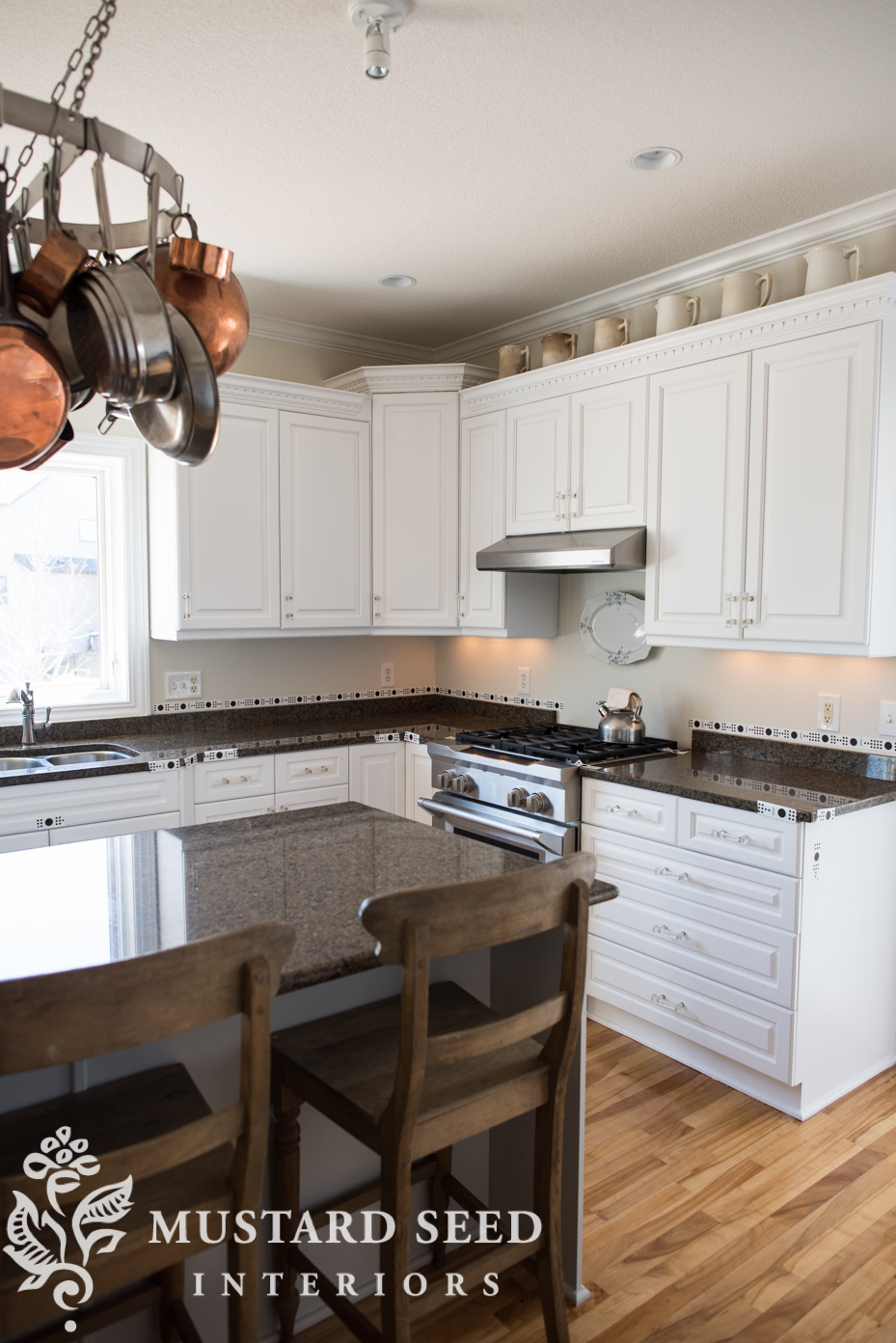 A couple of weeks later, the counters were cut and ready to be installed.  When I saw them in the truck, I couldn’t believe they were for our house.  I have dreamed of white stone counters for years and now I was minutes away from having them installed in my house. 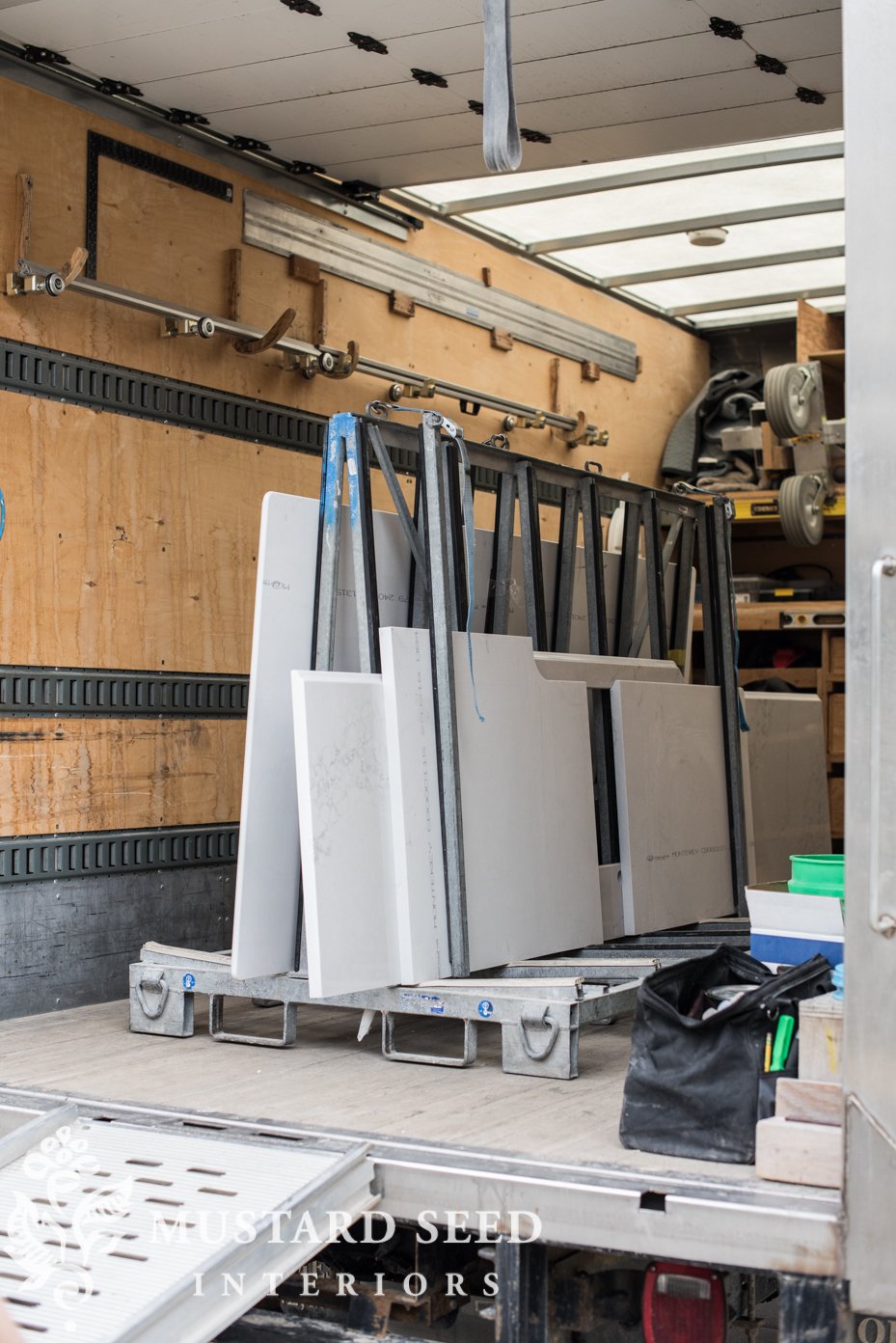 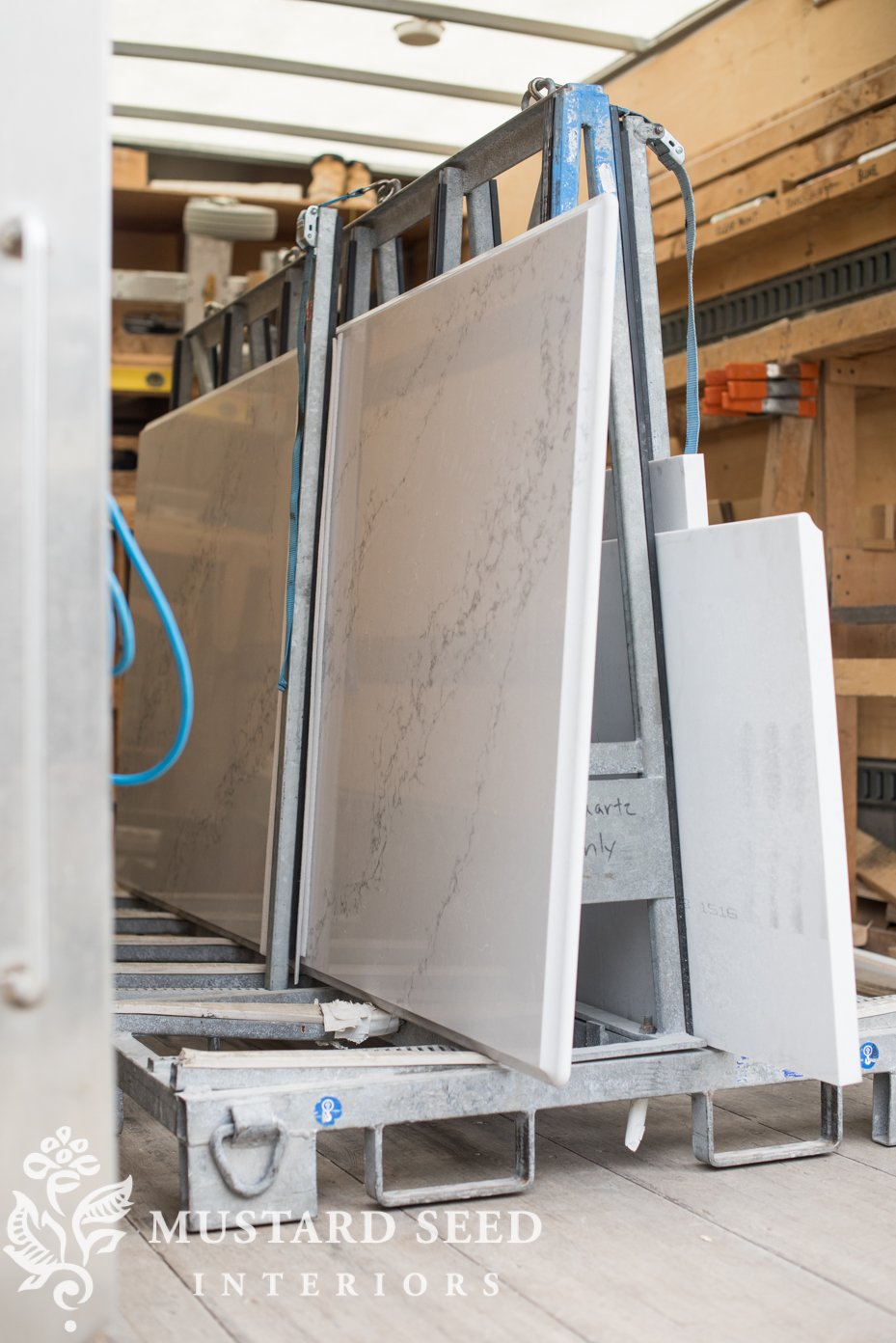 They first had to remove of the existing granite counters and that was the hardest part of the job.  Jeff and I also had to figure out what to do with them!  Originally, one of my friends thought she would be able to use them in her house.  Our kitchens have almost the exact layout, but her island is tw0-tiered and at an angle.  The rough measurements worked, but once they got to the finer details, these just weren’t going to fit.

So, I did what I do when we want to get rid of something quickly…  I listed them on craigslist for free.  There are times when I know I can sell something and probably get some decent money for it, but I remember the days when money was very tight and people were so generous with us.  There were many, many times we were able to get things for free and it was such a blessing.  I was hoping these would be a blessing to someone.

I received multiple replies to my ad within an hour, but the first one was from a sweet couple who is building a home completely out of reclaimed and recycled materials.  They were in the process of designing the kitchen and these pieces would work in their layout.  They showed up during the removal, so the heavy pieces of granite could be loaded directly into their trailer.

The counter removal process was a bit of a nail-biter, because they were really, really well installed.  At one point, with all of us watching on, the remover/installer said he wasn’t sure if they would be able to get them out all in one piece.  But, they patiently worked on them, wanting to save the counters as much as the potential new owners.  And they did it! 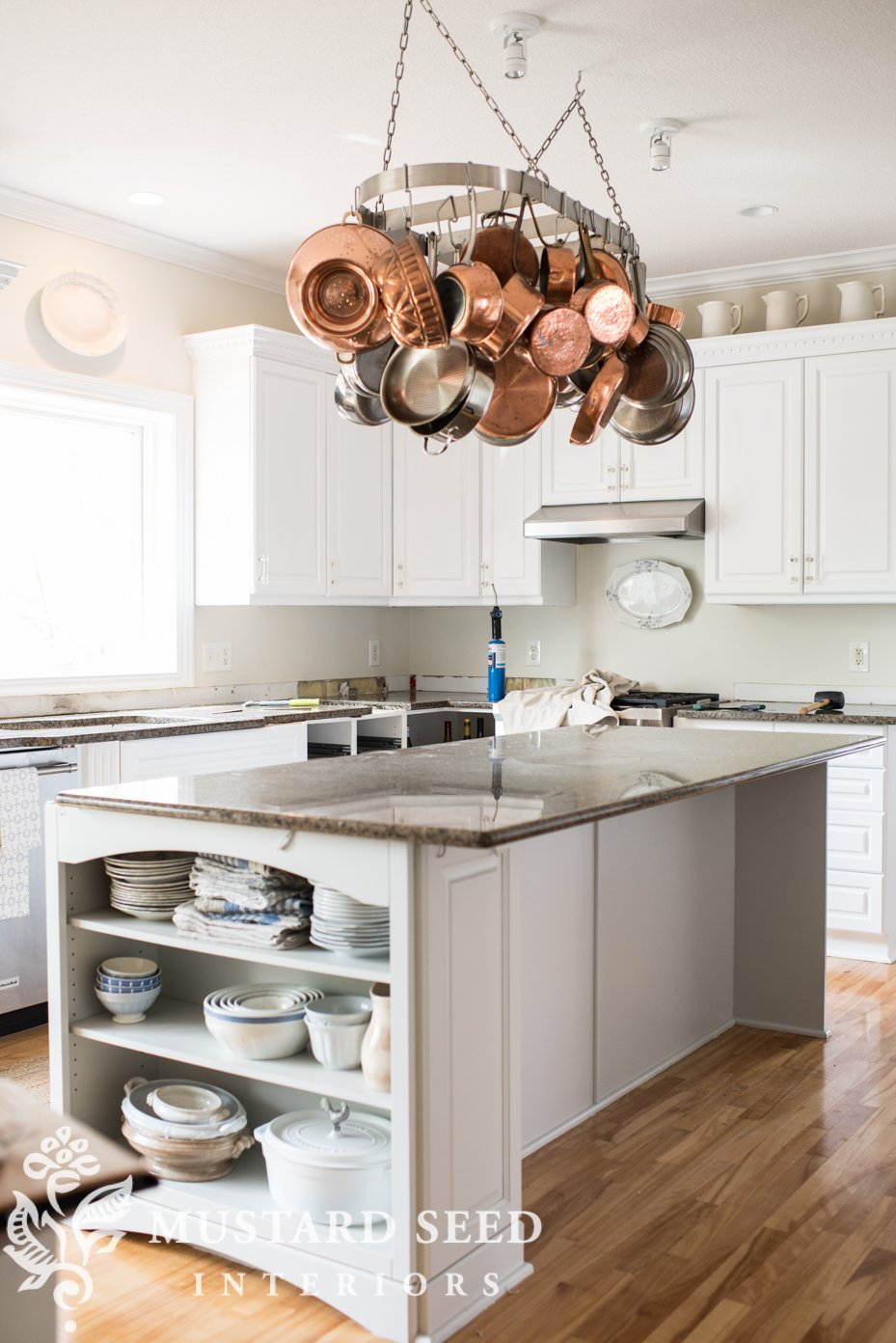 They were able to get all of the pieces out intact… 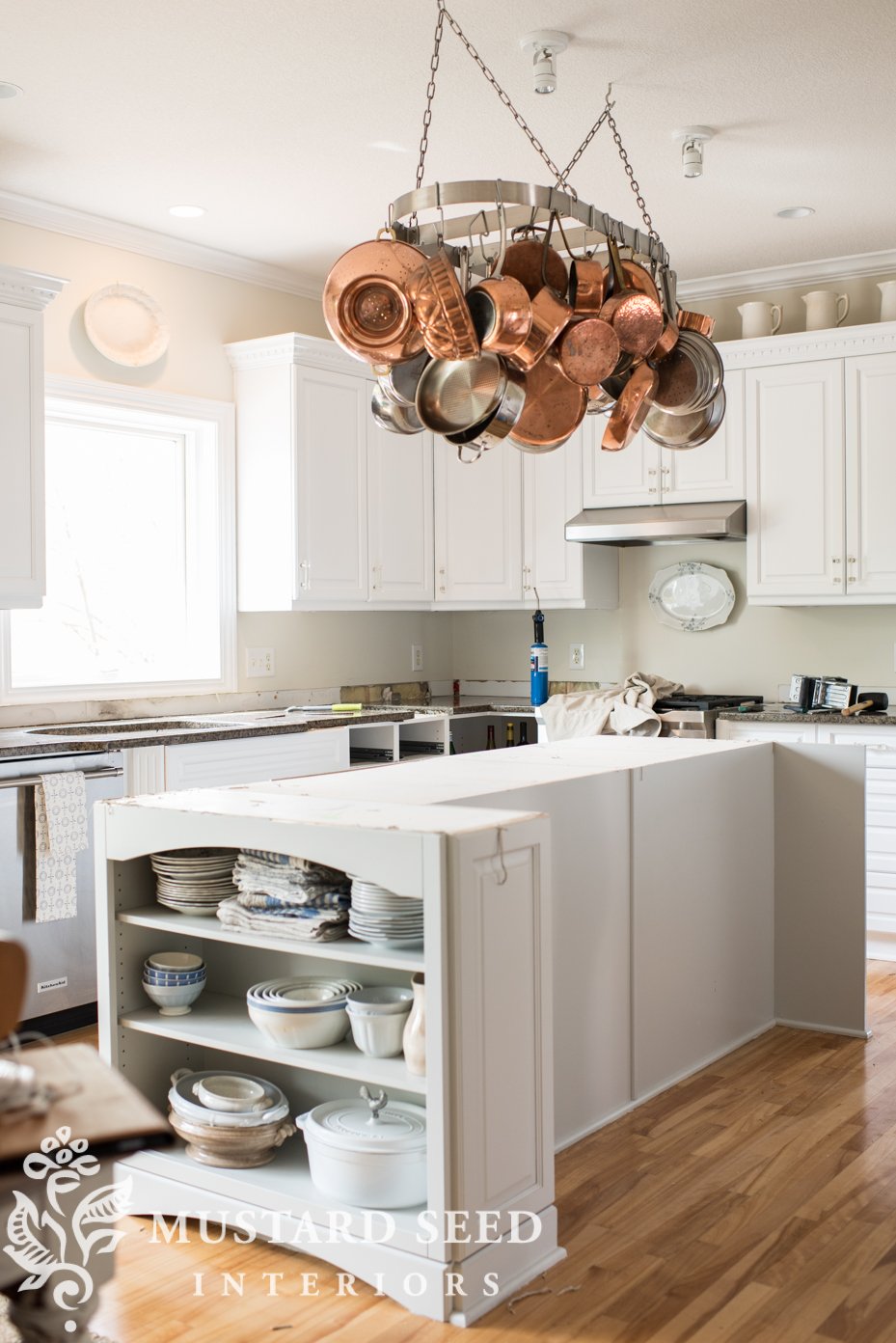 And they even loaded them onto the new owner’s truck.  Which, by the way, these people were super prepared.  Sometimes, craigslist encounters can dissolve into crazy stories of someone trying to strap a piece of granite to the top of their VW Bug, but this wasn’t like that at all. 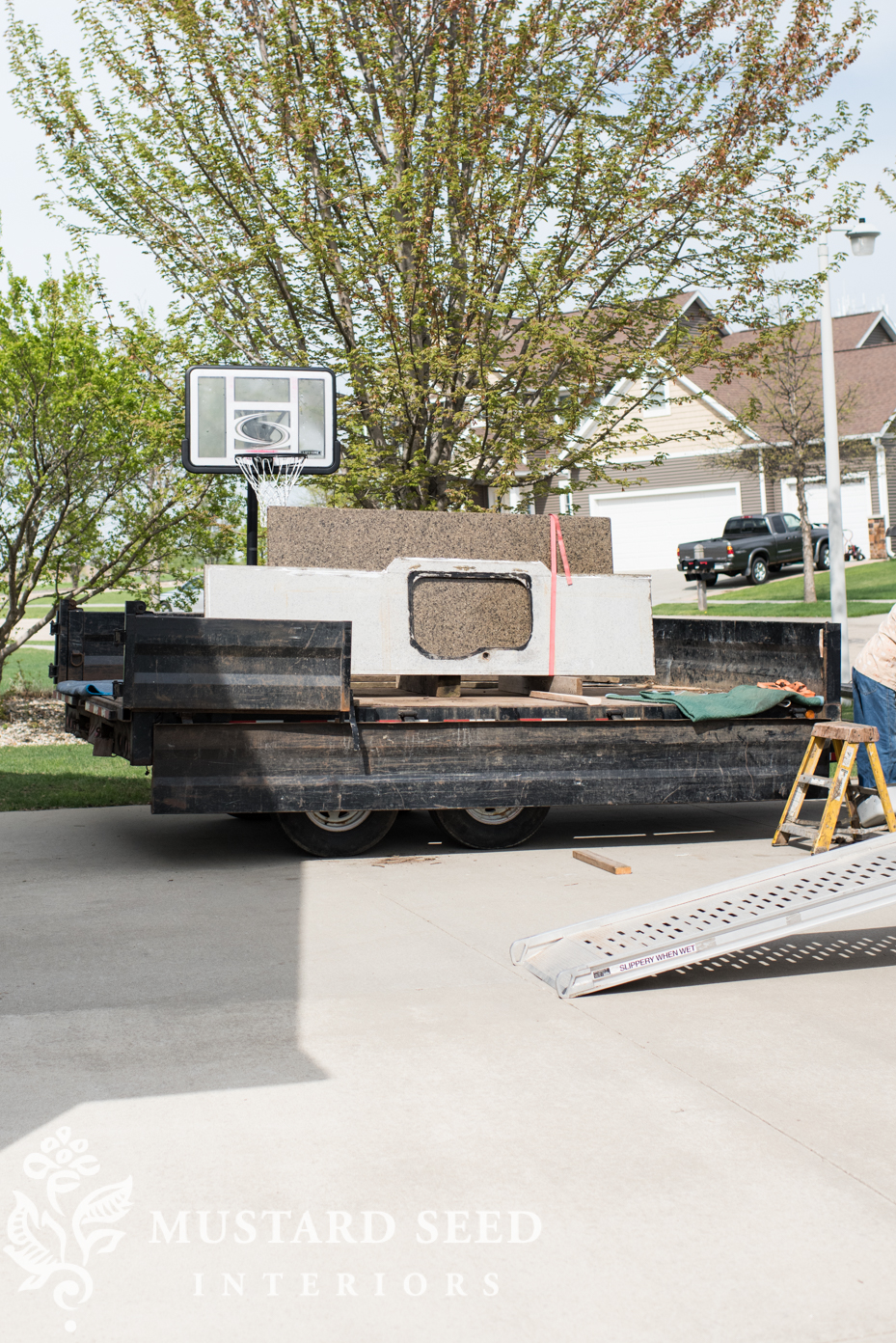 With the old counters completely removed, the new counters were ready to go in. 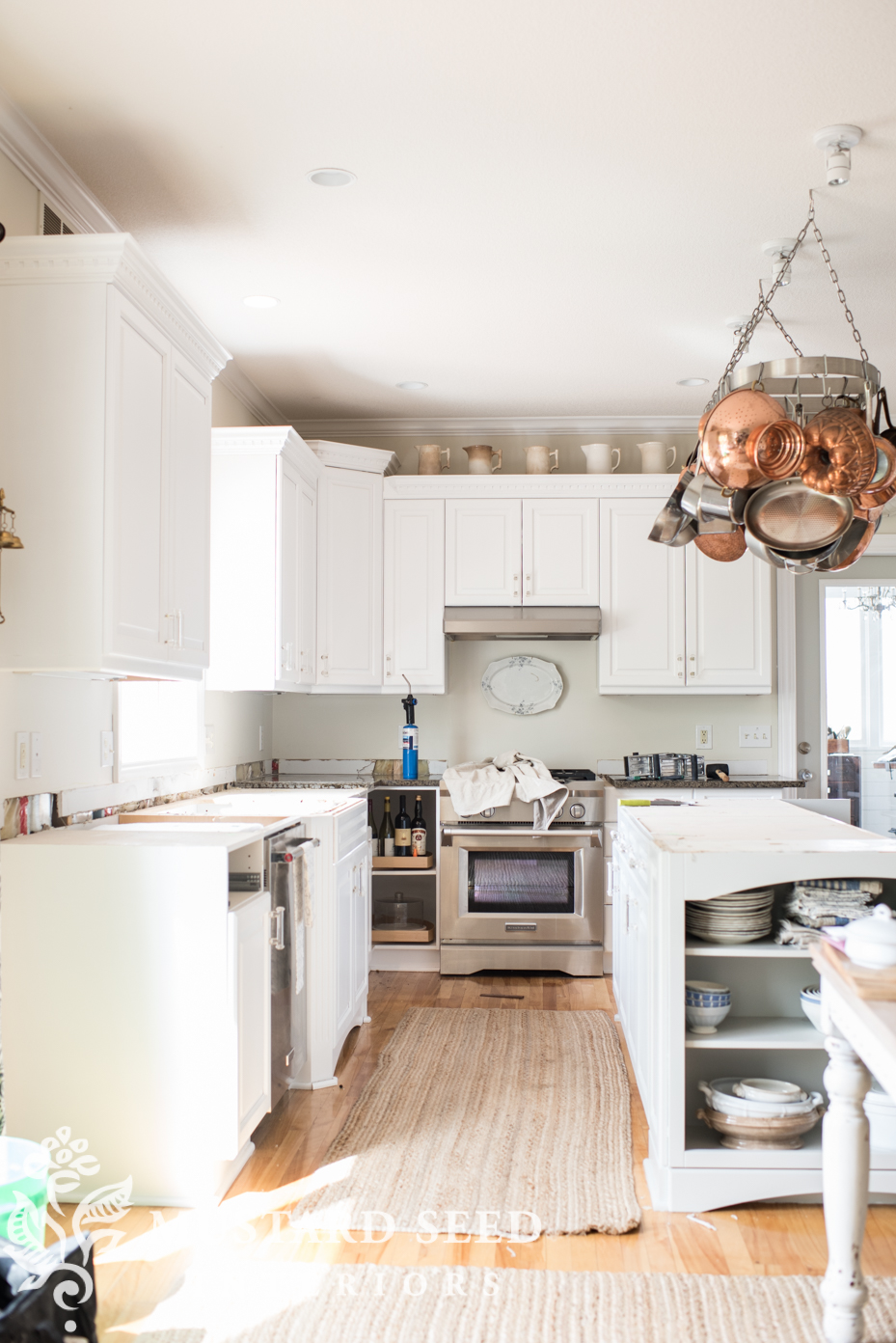 And, the counter installation included installing the new undermount cast iron sink.  They built a support frame for it, sealed it, and everything.  They just couldn’t hook up the plumbing and faucet, since they aren’t licensed plumbers.

The sink piece was definitely my favorite part.  They did a beautiful job cutting the curve around the sink.  Our previous sink was also installed pretty far back, which was a back-breaker when washing dishes, so they moved it closer to the edge.  It’s positioned much better for dish-doing. 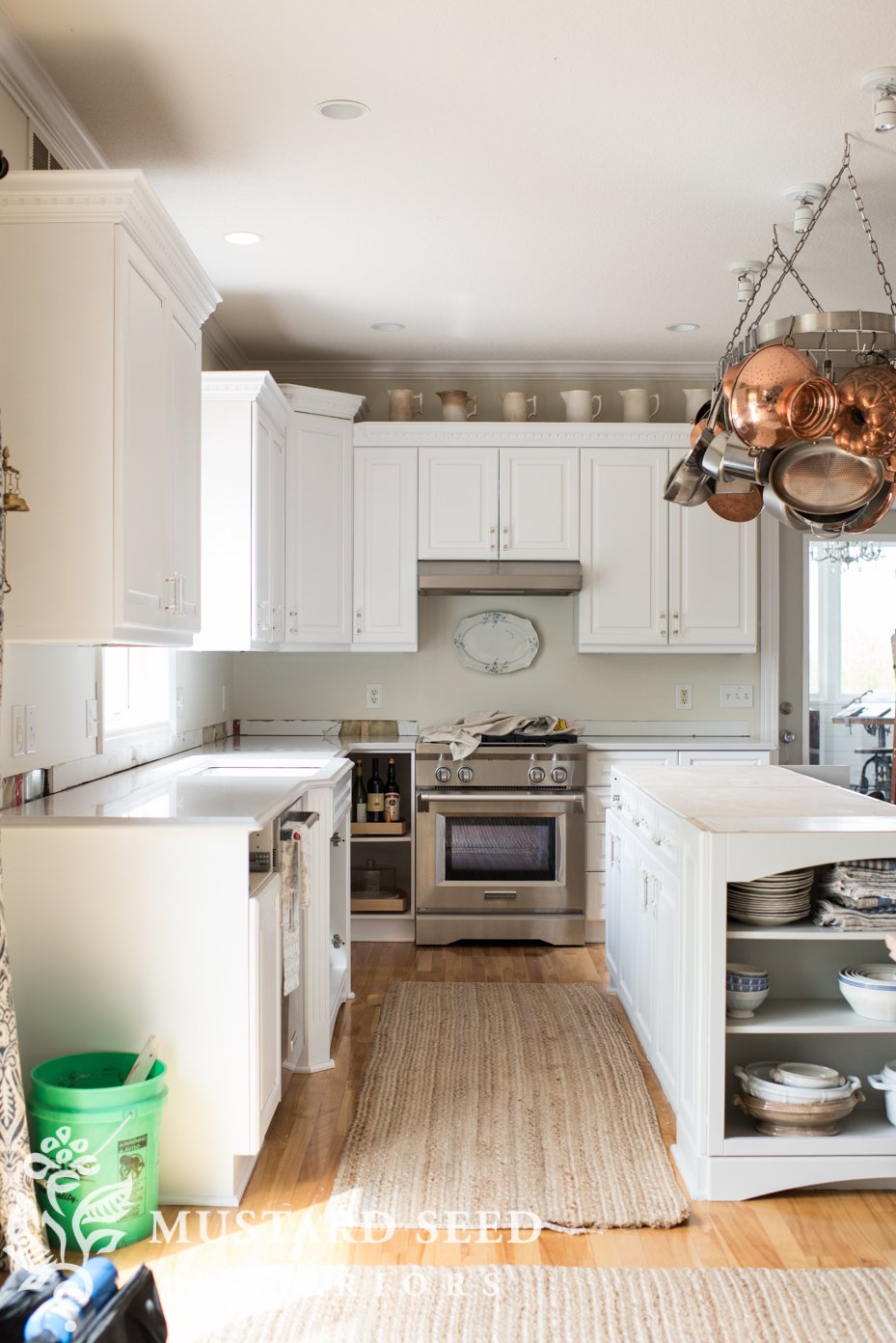 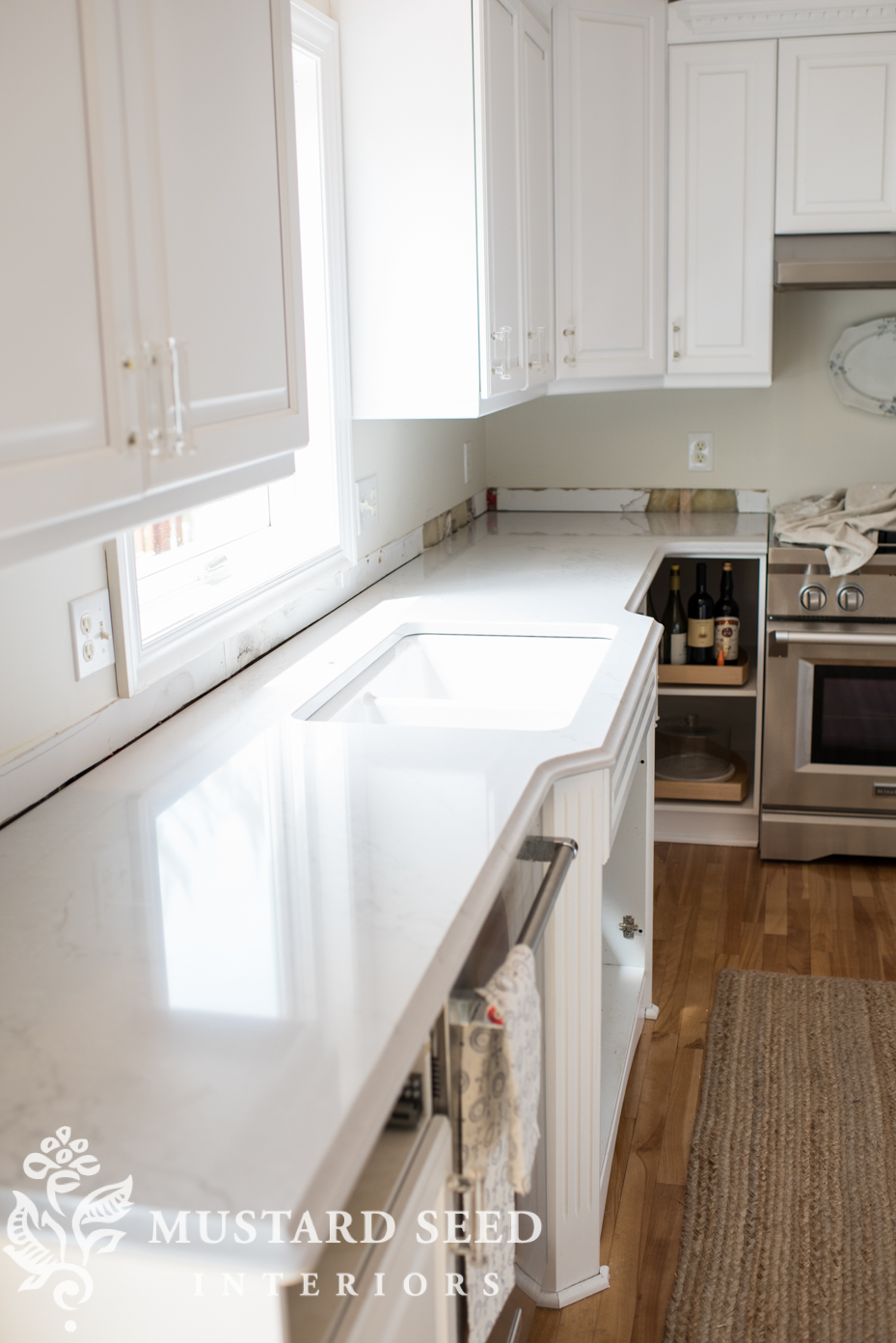 Well, the sink stretch was my favorite part until the island went in.  It is such a gorgeous piece of quartz and I love the ogee edge.  When we first started talking about edges, I figured an ogee would be a “premium edge”, which would make it an add-on expense, but I was delighted to learn it was one of their standard edges. 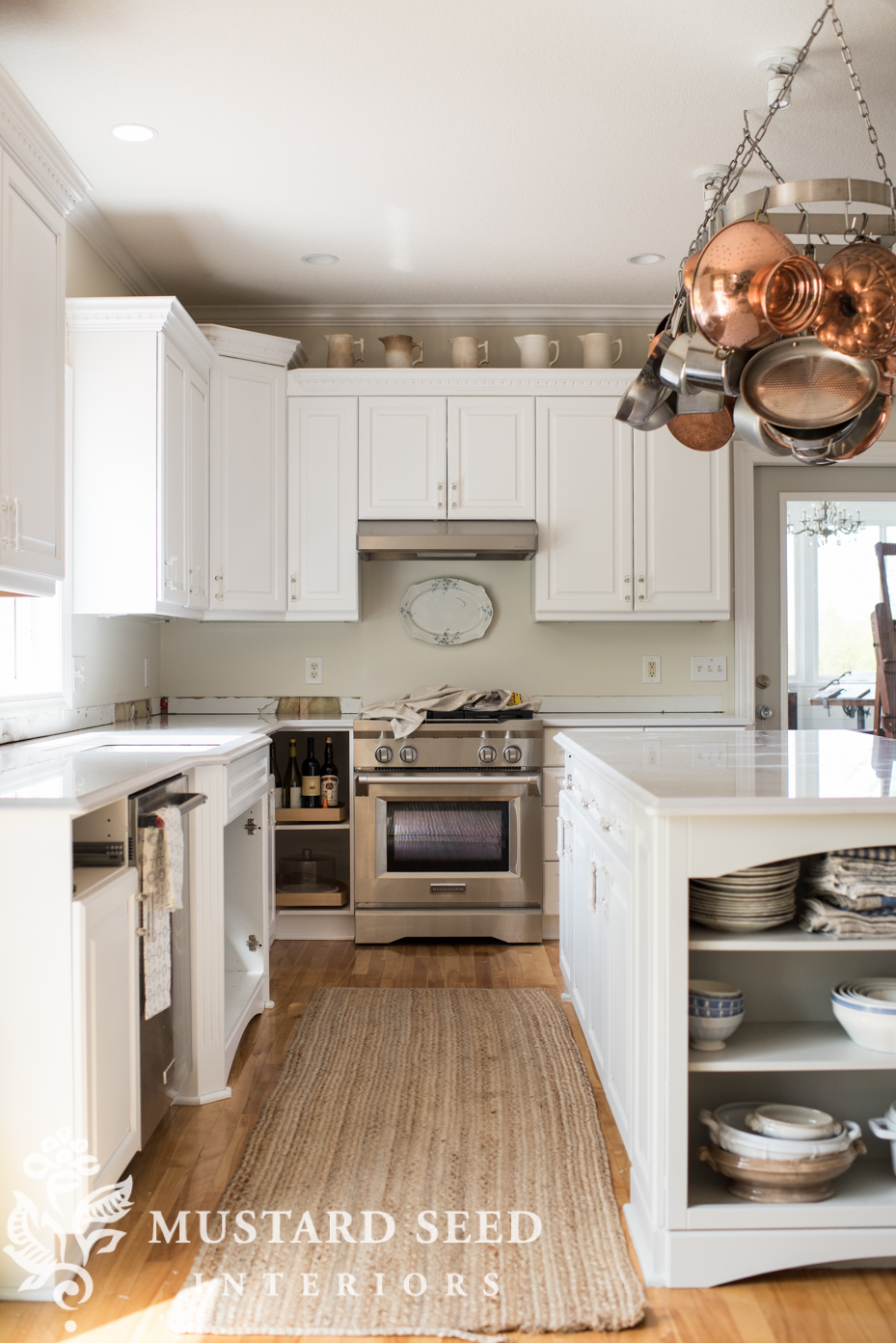 After the counters were in place, they attached them at the seam (in the corner to the right of the sink) and glued all of the counters down with silicone.

And the counters are gorgeous!  The HanStone Quartz is everything I wanted.  It looks just like marble and the veining is very natural and random.  You can’t see a repeated pattern at all, which was a concern some of my readers brought up.  (The pattern is Monterey, for those who missed that in my previous post.) 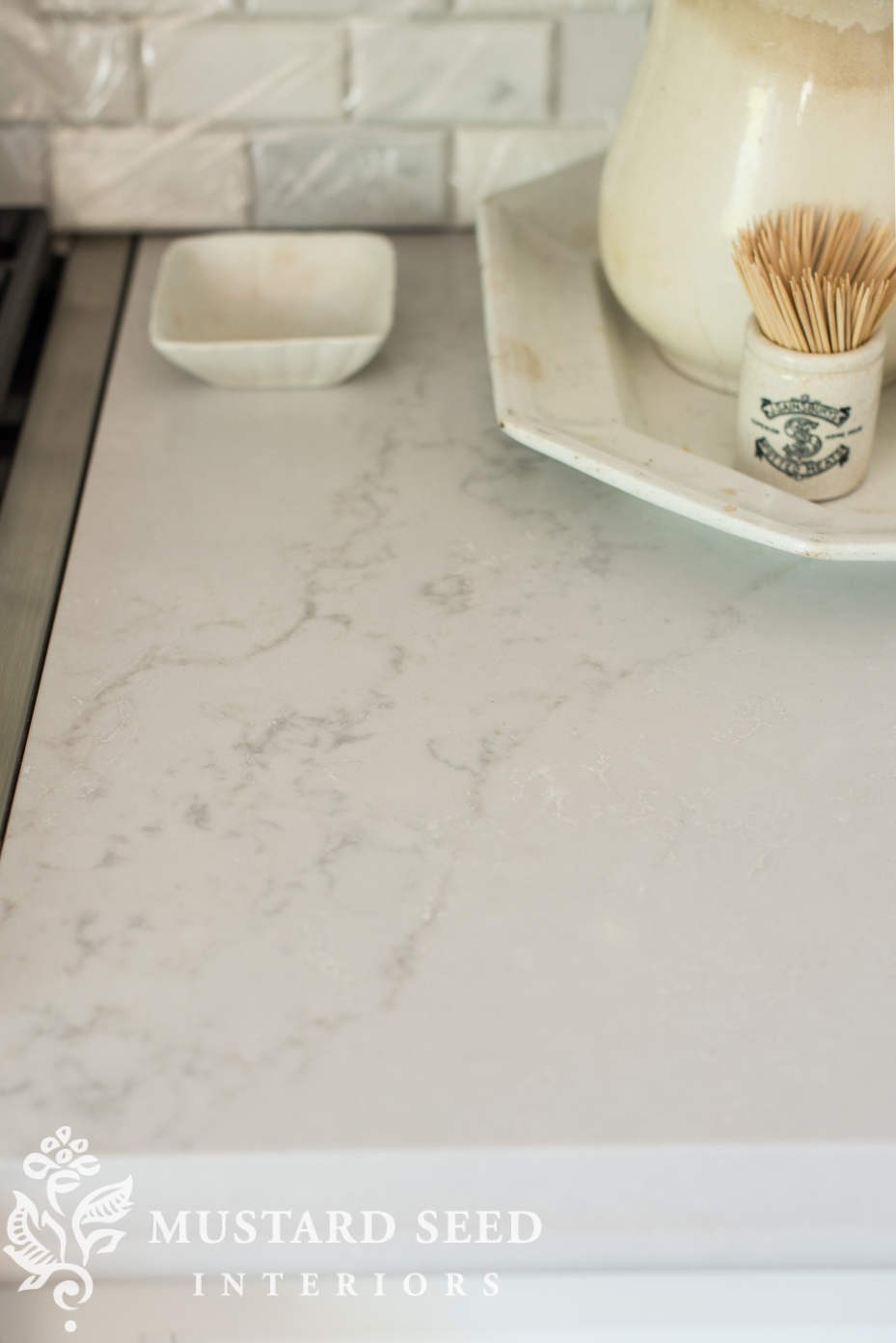 The material also feels so nice to the touch, which is important for a tactile-person like myself.  Our granite always felt a little gritty, which apparently isn’t uncommon, but these are buttery smooth.

The biggest bonus is they are durable, so I don’t have the fret about life happening on and around them. I had always loved the idea of having natural marble counters, but the truth is the etching and staining would bother me and I know I would be on pins and needles trying to keep them looking nice.  I actually felt a relief as these were being installed, knowing I got the look of marble without the downsides.

So, the plan was to just paint the wall behind the counters and wait a while to do the tile backsplash, but we discovered there are holes in the wall behind the original backsplash, so that project got bumped up on the list!  I’m currently shopping for tile, trying to determine what will work best with the counters.  I also have some plans for adding some color!  More on that soon…

If you’re in the market for new counters, you can find a HanStone dealer near you HERE and order samples online HERE.