One of the questions I’m asked most often is about how to clean stinky furniture.  Here is the most recent e-mail I received about that…

“I have an older dresser that smells awful! I have no idea what to do to alleviate the smell. It was my mom’s and now it’s mine. There hasn’t been anything smelly stored in it but I’m stumped as to what to do to have fresh-smelling drawers without having to sand the inside of the drawers down or douse it with chemicals. My only other thought is to spray or paint it with KILZ. Do you have any thoughts or suggestions?  Thanks for your time!”

Having bought and sold thousands of pieces of furniture over the past 10 years, I have done battle with many pieces that were stinky, musty, smelled like smoke or animal pee, or were just completely dirty and gross.  Sometimes it’s because I bought the pieces sight-unseen or I just didn’t take the time to give a piece the sniff test, so I was stuck with a stinky piece I had to do the best I could with it. There were other times that I knew just what I was getting into.  I loved the piece so much that I was willing to put the extra work in to clean it up and get it smelling nice.

So, I’ve learned a trick or two along the way about how to clean stinky furniture.

one | always give a piece the “sniff test”

I don’t always follow my own rule, but it will save you a lot of work if you just put your face down in the drawers or against the upholstery or in the cabinet for just a second to make sure you can live with the smell.  Anything that has a strong smell of smoke or animal urine will be tough (not impossible) to clean.  Just know that going into it, so you can decide if the piece is worth it or not.  Those smells will typically diminish, but never really go away entirely.  If a piece just smells musty, dusty, or “old”, you’ll be able to take care of that.

Here are a few of the worst, dirtiest, stinkiest pieces I’ve bought over the years… 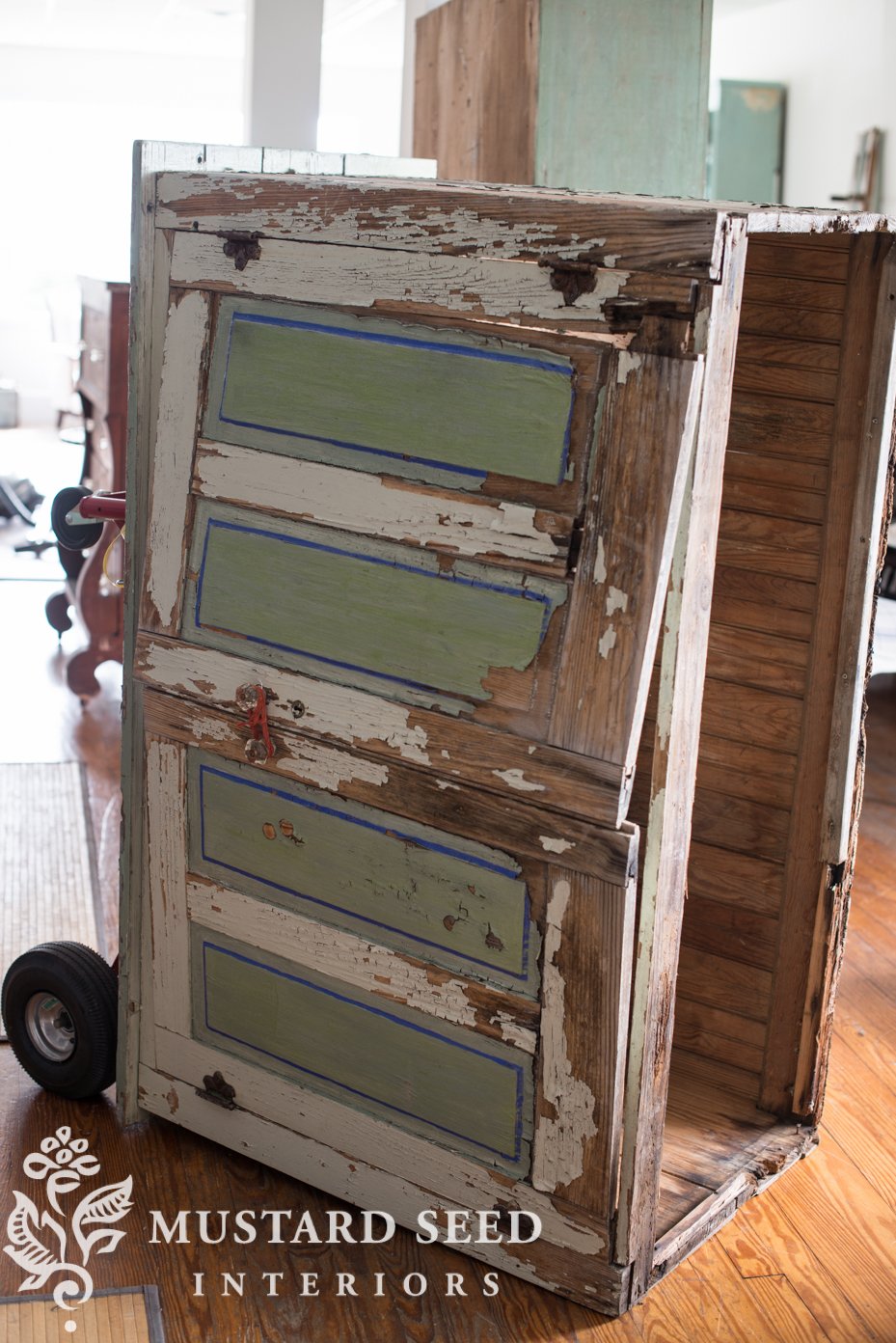 The hardware cabinets – my hands were black after cleaning these and removing the plastic inserts in the doors. 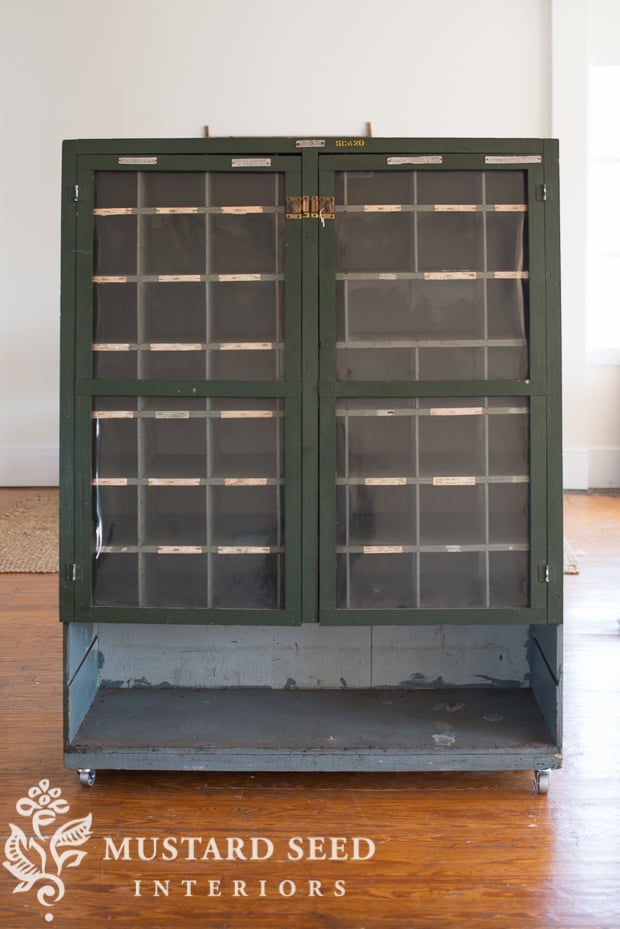 THIS primitive piece that I fell so hard for that I completely saw past the fact that it was gross and stinky inside. 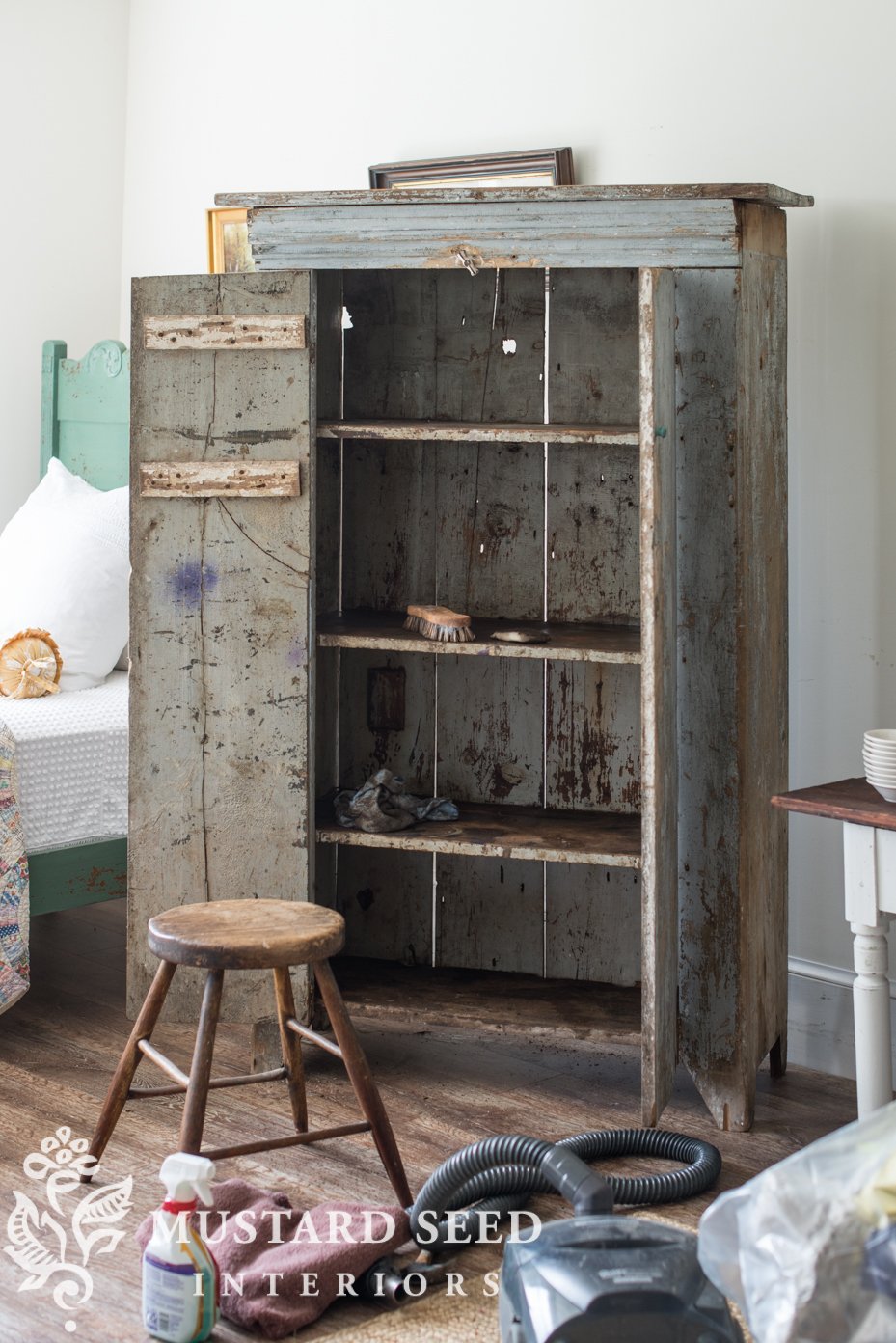 The chicken incubator that I turned into a coffee table… 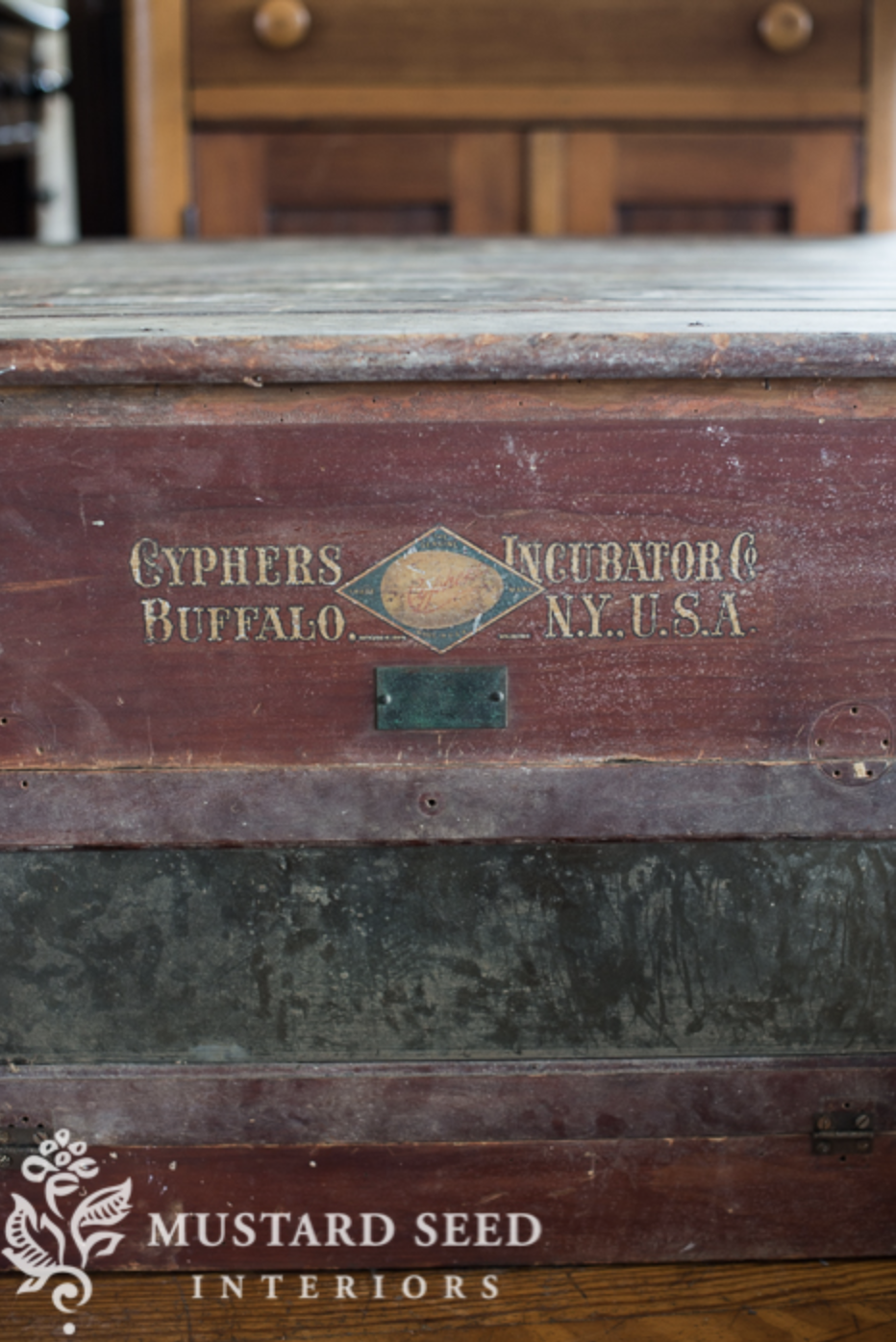 The chicken incubator was probably the worst ever.  It smelled so catty and it was just filthy.  The water was black when we washed it and it took almost an entire day to get it clean.  Oh, and the smell.  It was just awful.   I don’t know what I was thinking!

I always vacuum a piece first thing.  Even if it looks pretty clean, it’s a good idea to remove the drawers, vacuum out the cavity, the drawers, the back, and the underside to remove cobwebs and dust.  It’s amazing how just removing the surface-level dust can make a piece smell better. 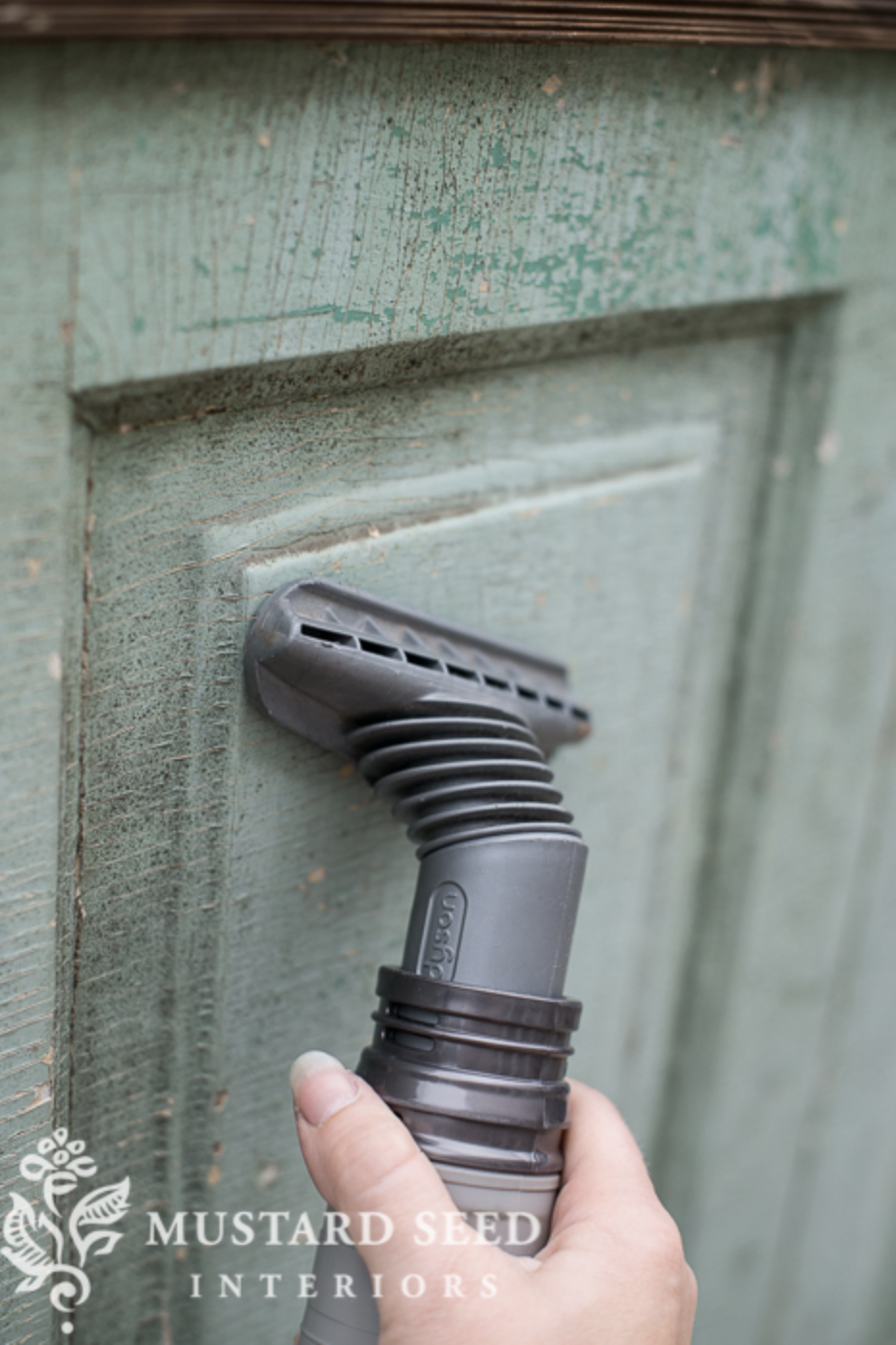 three | clean with soap and water

I think most people are afraid of getting wood wet, but it really will be fine!  Even painted and finished pieces can be washed and scrubbed.  The key is to not let water sit on the surface and put it in a good place to dry.  So, if vacuuming alone doesn’t cut it, fill a bucket with warm water and some mild dish soap and give the piece a good, old fashioned scrubbing.  Dry it off with an old towel and then let it sit outside to dry.  Do not sand, paint, or finish it until it’s completely dry. 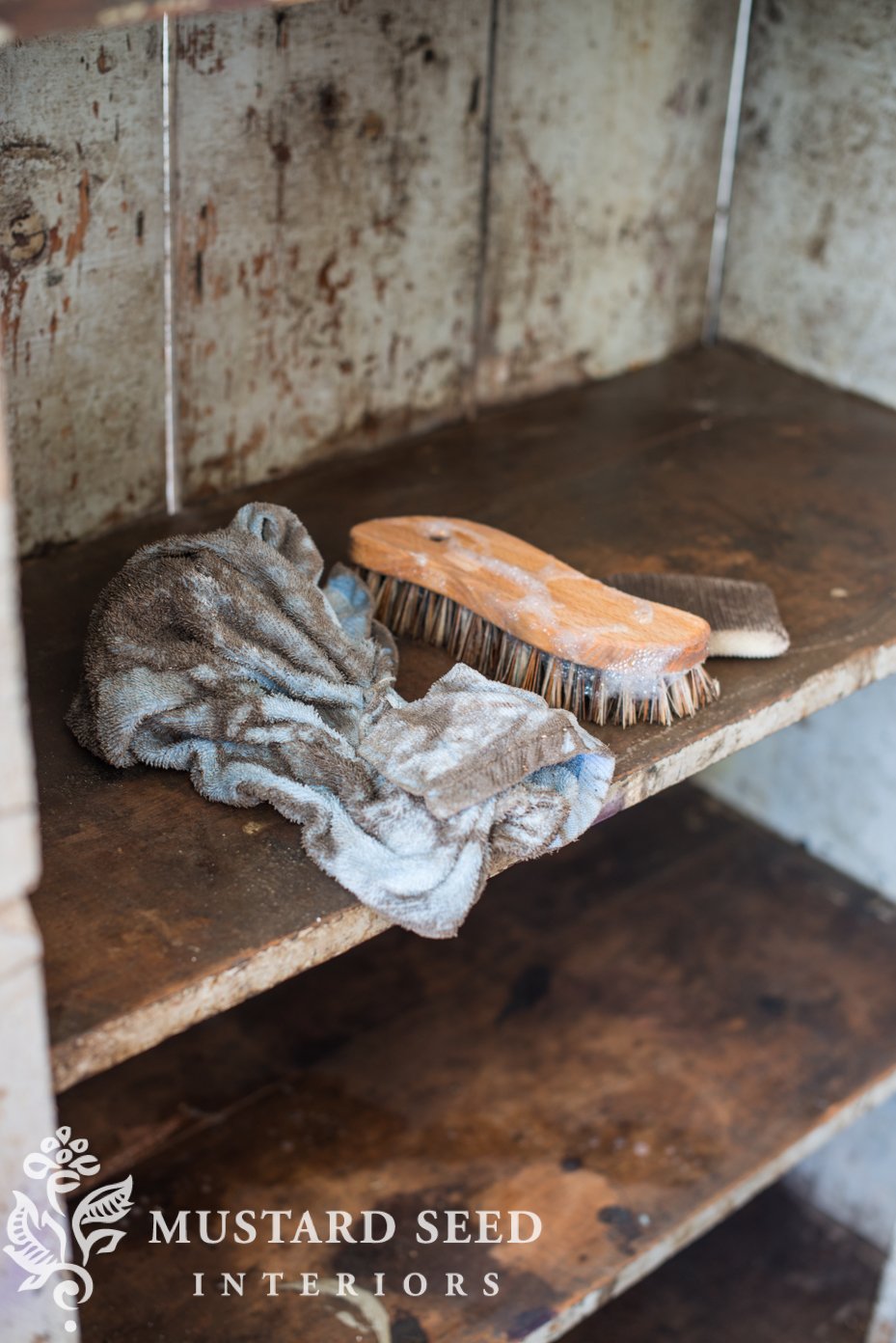 four | use a degreaser

If a piece came out of a garage, workshop, or barn, it’s likely to have some grease on it.  Even furniture that comes out of kitchens can have a nice layer of airborne grease on the surface.  Soapy water won’t always cut it, so use a degreaser like 409.  Just spray it on and scrub it off. 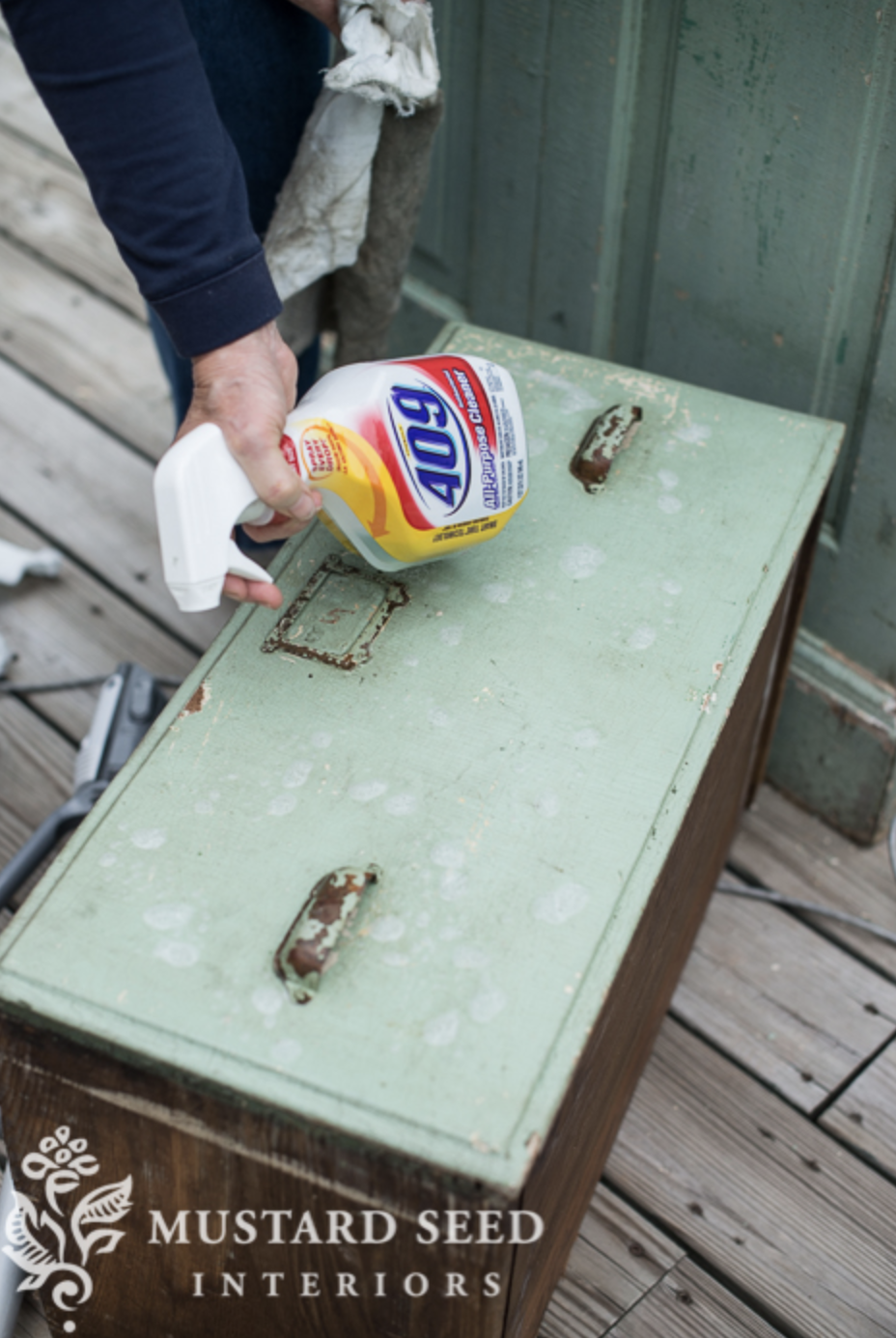 The best way to deodorize a piece is to sit it outside on a sunny, breezy day.  Remove all of the drawers, open the doors, and just let it air out.  That’ll do wonders for musty pieces.  If it still smells musty, then I’ll try to absorb the odor by putting a cut of coffee grounds inside each drawer.  The coffee will absorb odors pretty well.  You can also use charcoal briquets or kitty litter.  Wiping the piece with a little vinegar mixed with water can also help neutralize odors.

I’ll then use some lavender sachets to help the drawers smell nice.  I’m not a big fan of using flowery-scented sprays, but you gotta do what you gotta do sometimes! 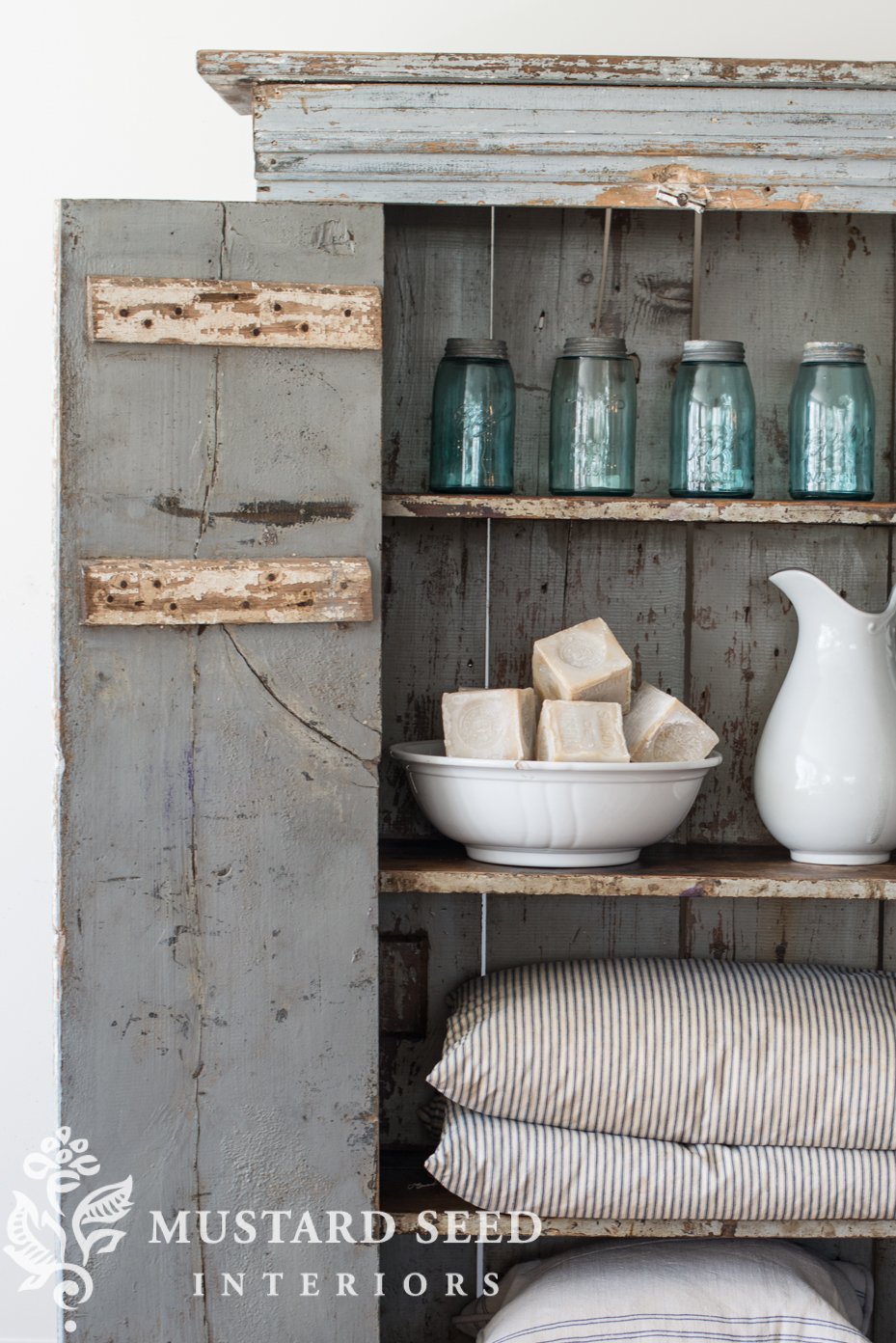 six | seal in the smell

If you’ve gone through all of these steps (and I would suggest doing some of the, like scrubbing and airing out, multiple times if needed), then you have to go to the nuclear option – seal the entire piece with an odor-sealing primer, like KILZ Odor Killing Primer.  If the piece is really bad, you might need to do the inside, outside, back, bottom, and every nook and cranny to completely seal the odor.  I’ve never had to do that with a piece, though.  The steps above have always gotten pieces to a place where they are useable and won’t stink up a whole room. 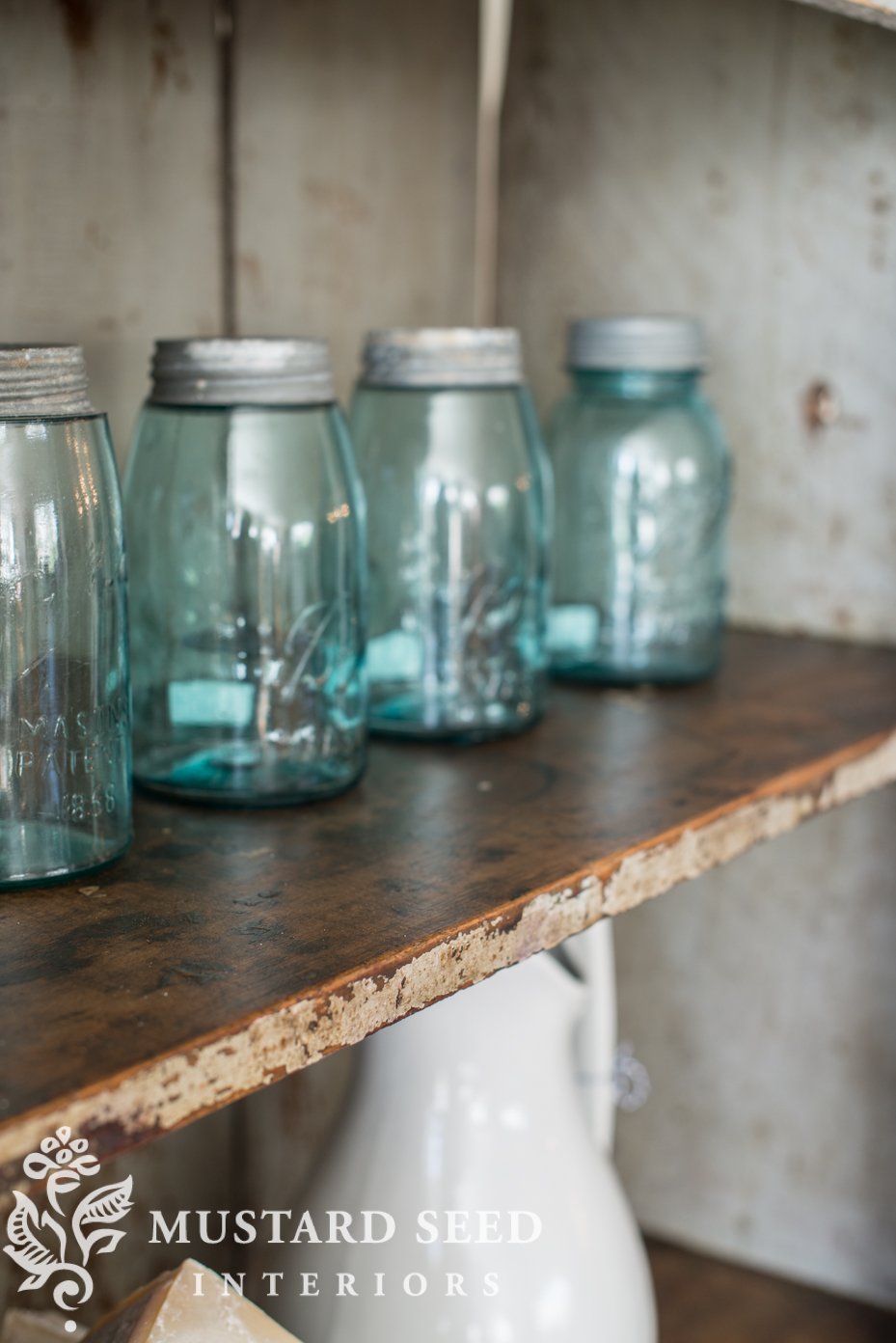 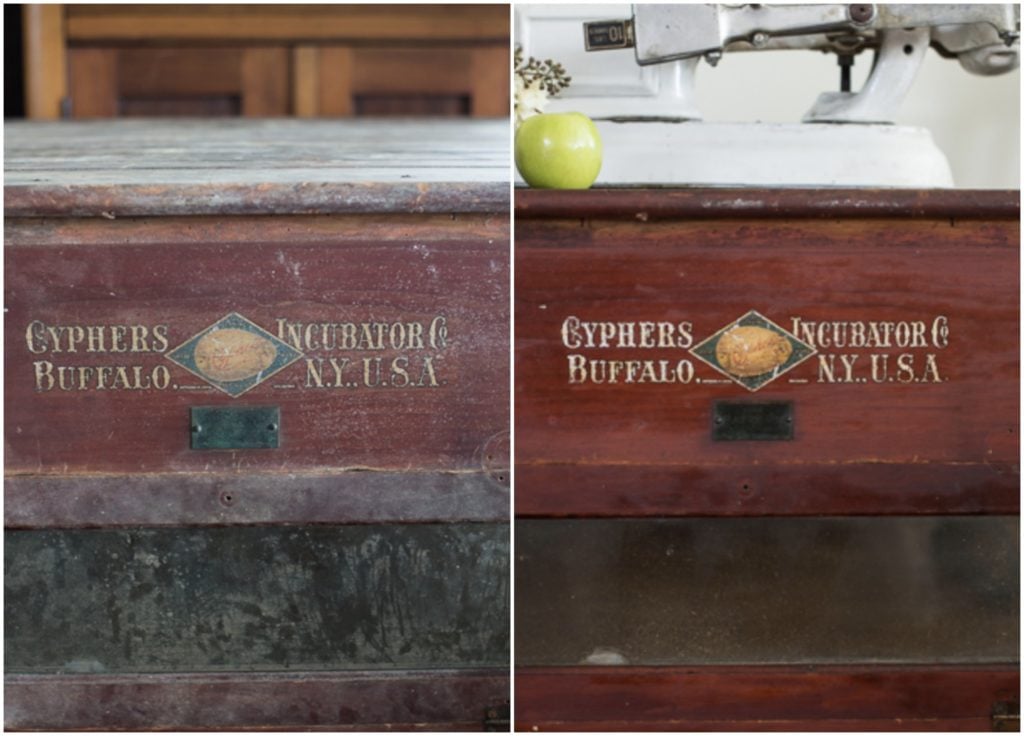 For those who have been asking how to clean a stinky piece of furniture, I hope this post answers your question!

If you’d like to see more furniture makeovers I’ve done over the years, you can find them HERE.