I find that my workspaces are the trickiest when it comes to arranging and decorating, simply because they have to evolve as my work evolves.  I’ve been using my studio and home office for a year and a half now and I’m learning what works and what doesn’t.  I’ve made a few changes and additions that have really helped, but there are still some needs that haven’t been addressed.

In both rooms, I have some nice storage pieces, but neither space has a closet, so bulkier items that should be in those rooms are stored elsewhere in the house.  As someone who likes to keep things in the room where they belong, I find that annoying.  It’s a small inconvenience, but if I can do something within reason to fix it, I will.

So, the biggest project I have planned is to build a closet (more like a built-in wardrobe) in the studio.  Jeff and I have drawn out plans and put together a cut-list and we think it’ll be reasonably simple to make.  We’ll build it where the oak hutch currently sits.  It’ll be about 2′ deep and will run from the wall to a few inches away from the door.  We won’t build it all the way to the ceiling but will leave some room for baskets up top.  Again, this is so it feels more like a piece of furniture. 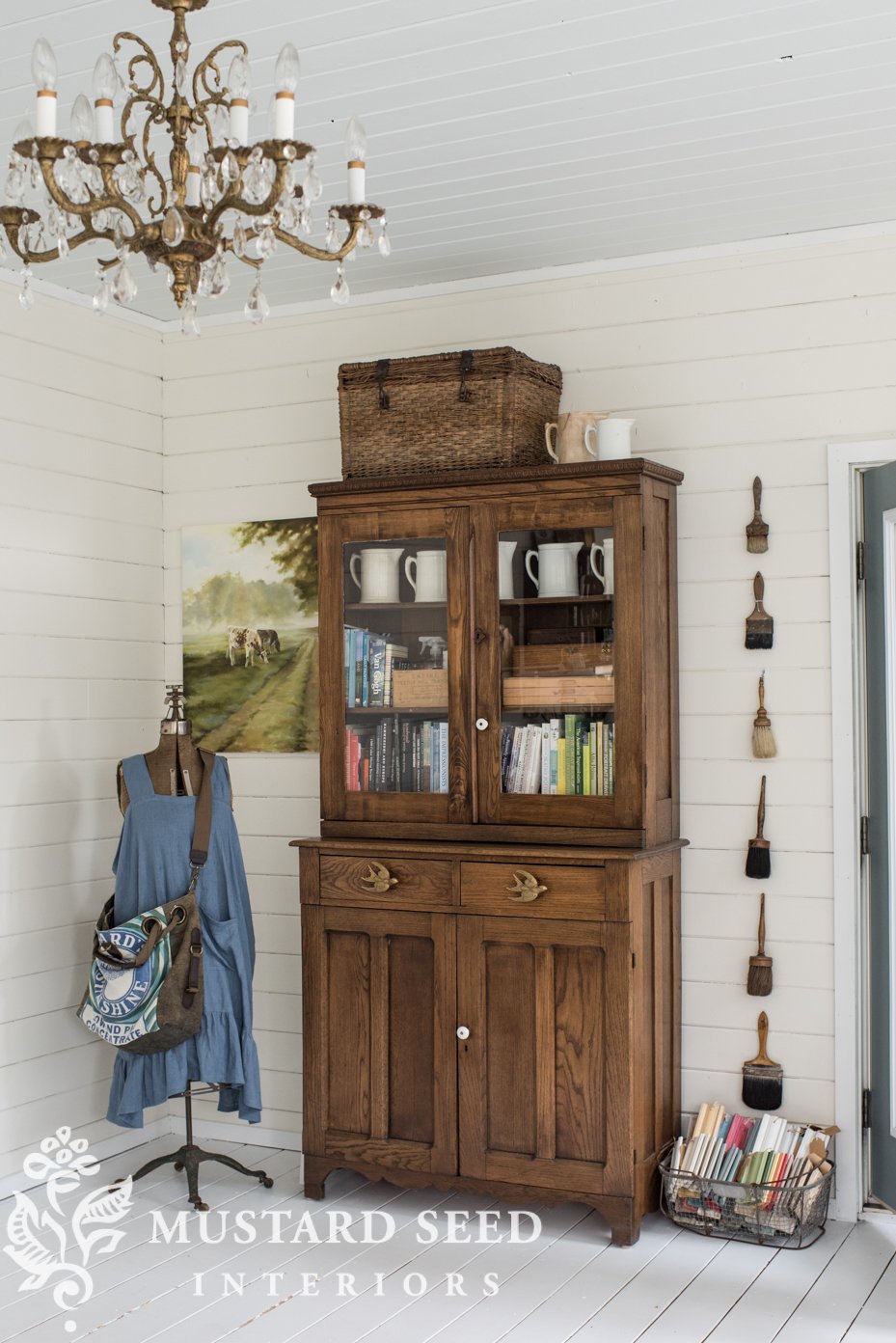 Here is a rough sketch of what we have planned… 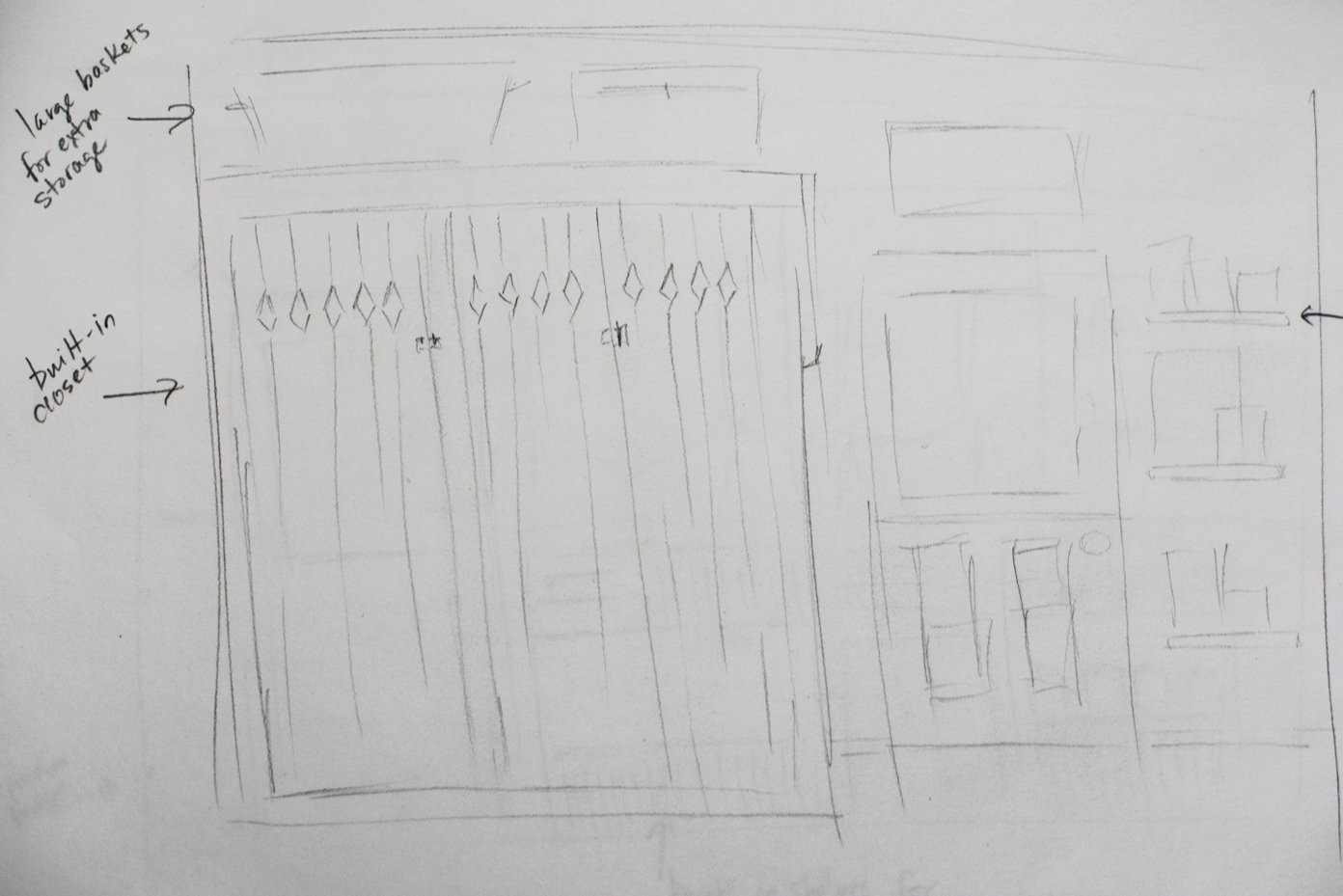 (We don’t have any immediate plans to install a dutch door, but that is something I hope to do eventually.  It’s free to put it in the sketch, though, so I indulged.)  The closet will be built out of 2 x 4’s and clad in the same tongue and groove paneling that lines the walls and ceiling.  I think the style will suit the room nicely.  The doors will be made out of wood planks as well and I plan to add a little cutout diamond detail along the top.

I cannot wait to have all of that room to store my photography gear, lighting, and bulky art supplies.

To the right of the door, I’m installing some picture ledges to use for wet paintings. I use a vintage dish drainer for smaller works, but my larger ones end up lining the walls, the floor, etc. 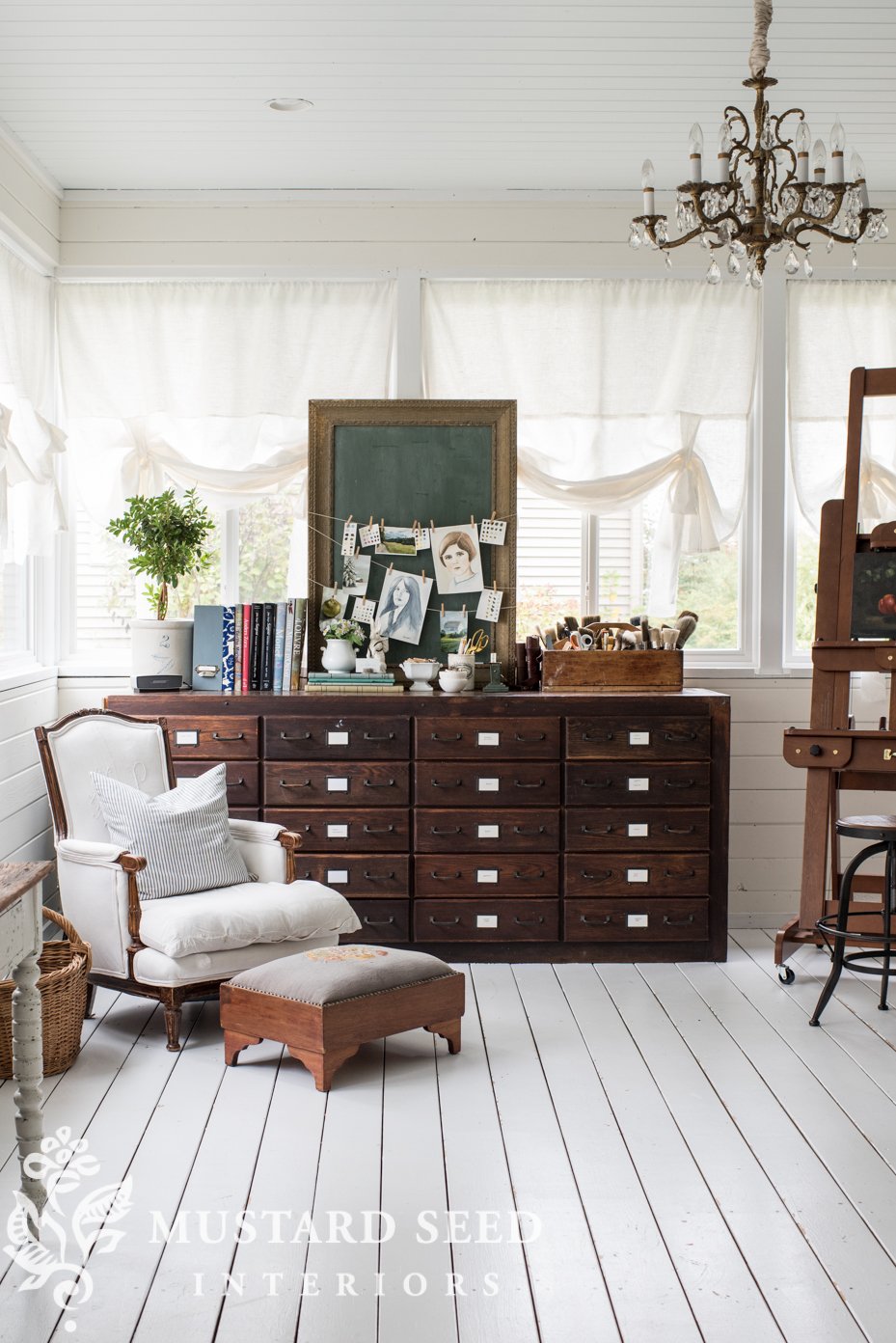 …to the wall where the green art cabinet is. 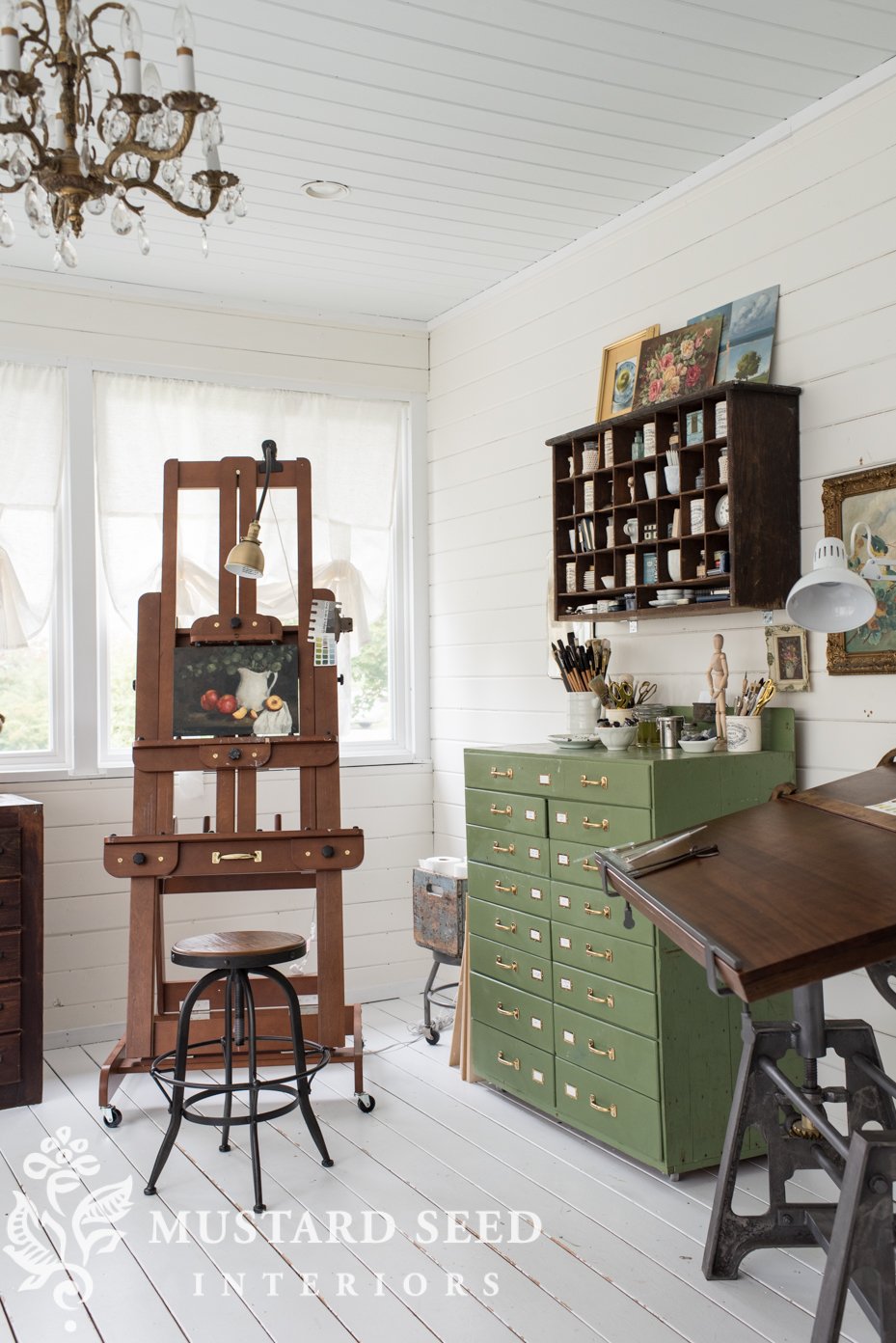 …and I have this idea to put the bookcase from my office, which is really the top off a larger piece, on top of the hardware counter.  They are a similar wood type and tone I think they’ll work as one large piece.  Now, that’s in my head!  Hopefully, it’ll work out in reality, too!  I have some alternative plans if that doesn’t work, but it’s worth trying. 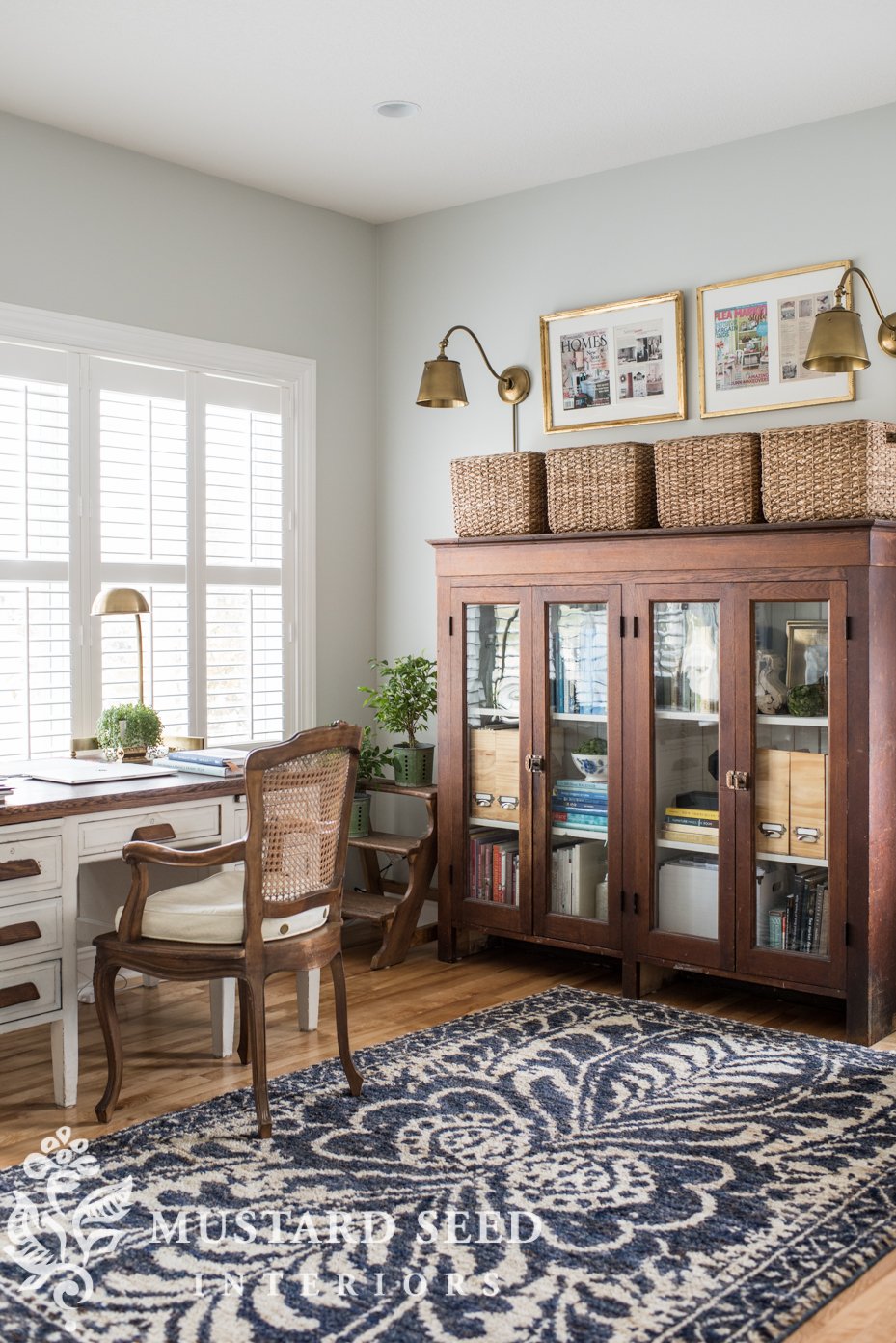 Here’s a rough, not-to-scale drawing of what I’m generally thinking… 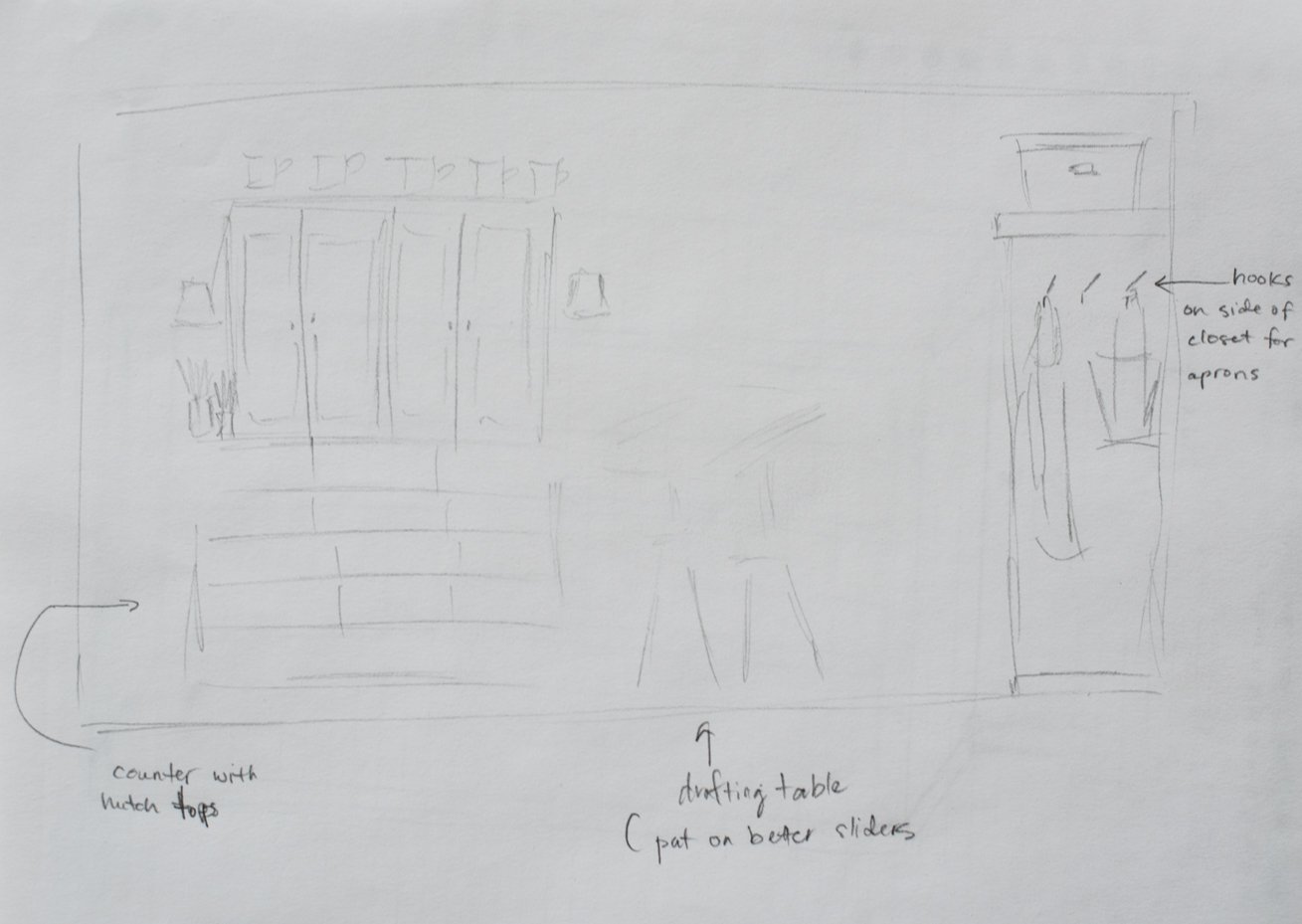 And, we will also finally build the bookcases I’ve been wanting under the windows on the left side of the studio. 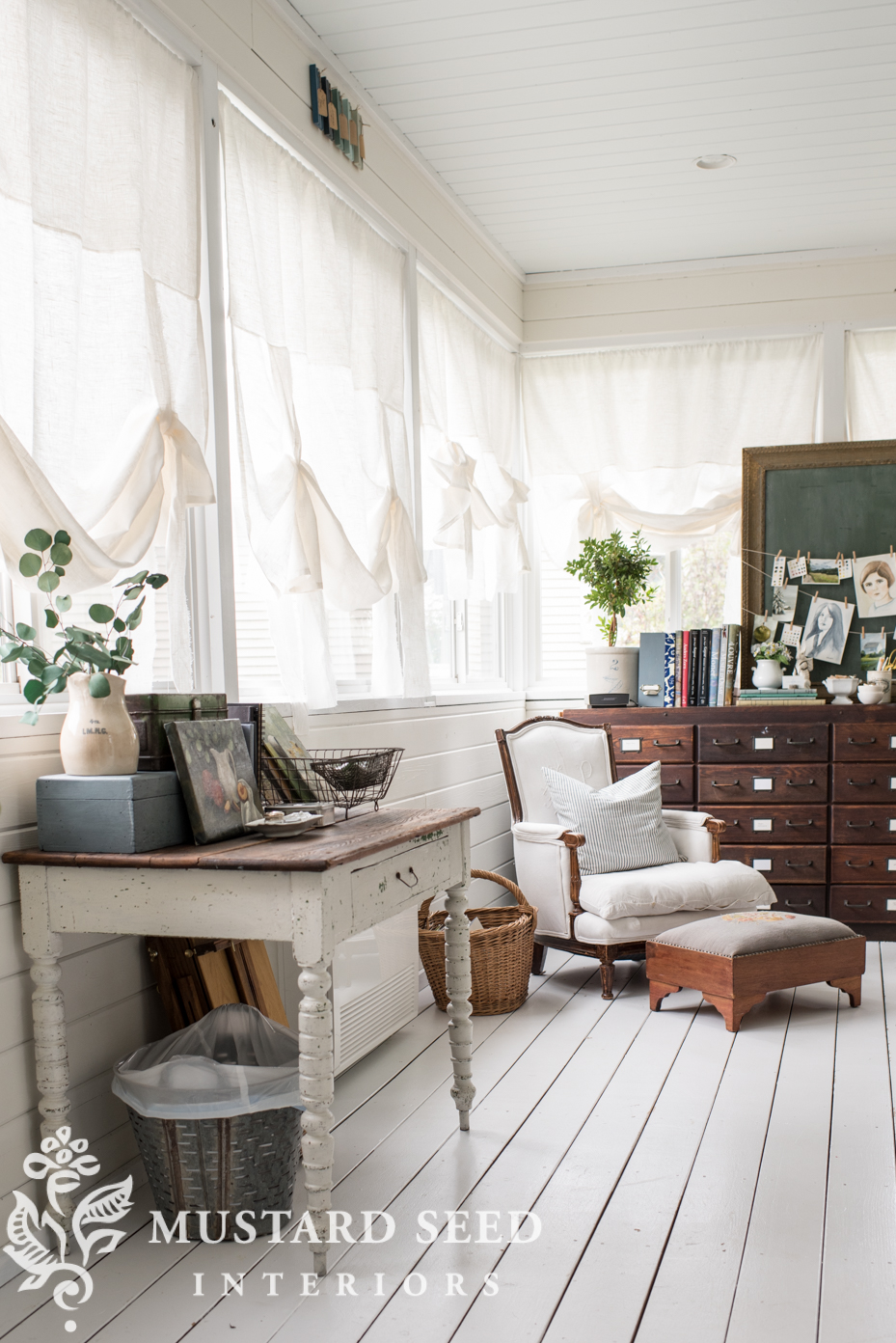 They will flank the mini-split until and will provide tons of open, accessible storage. 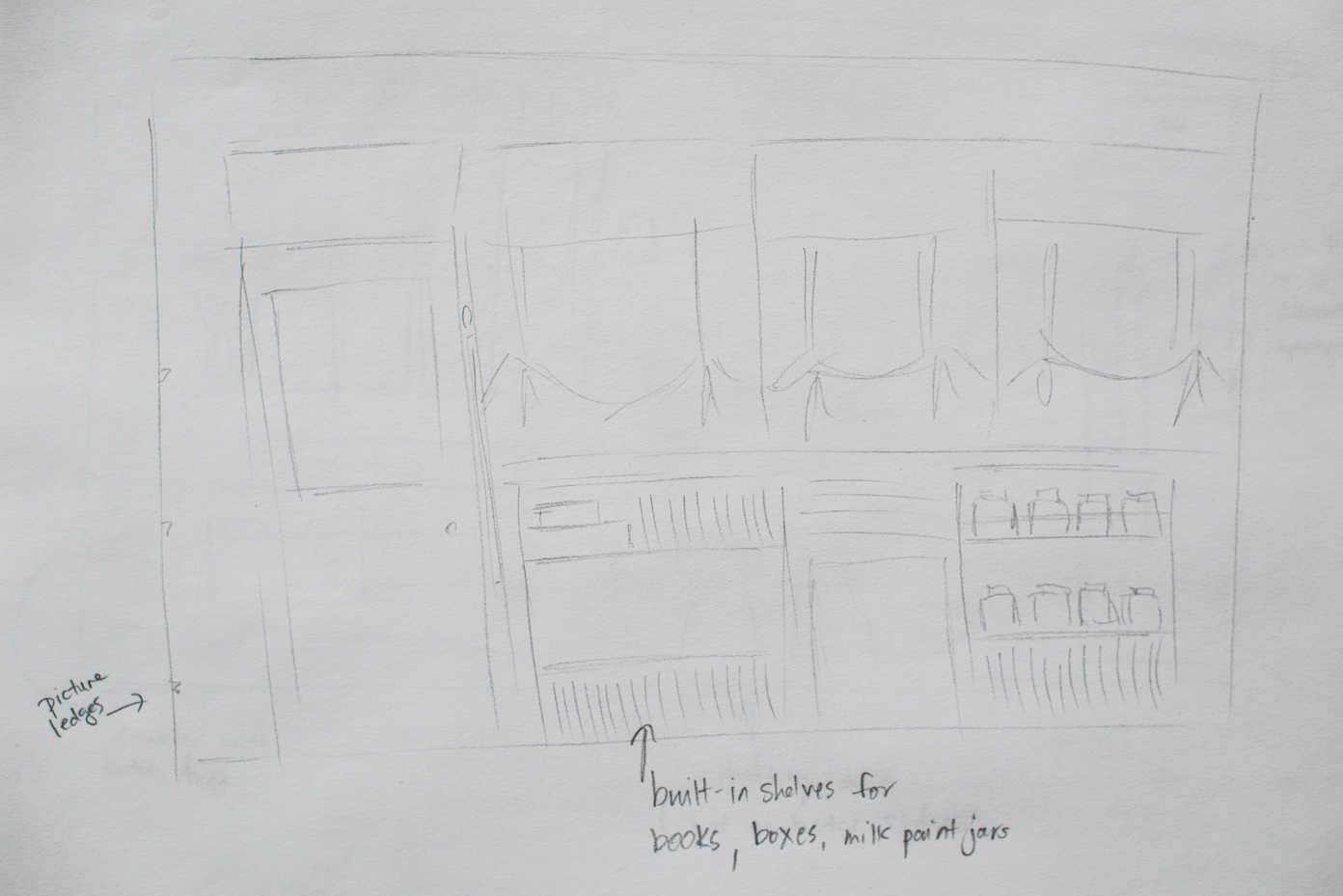 I’m going to swap out the existing chair with a wing chair from elsewhere in the house.  It sits a little higher and will be more comfortable. 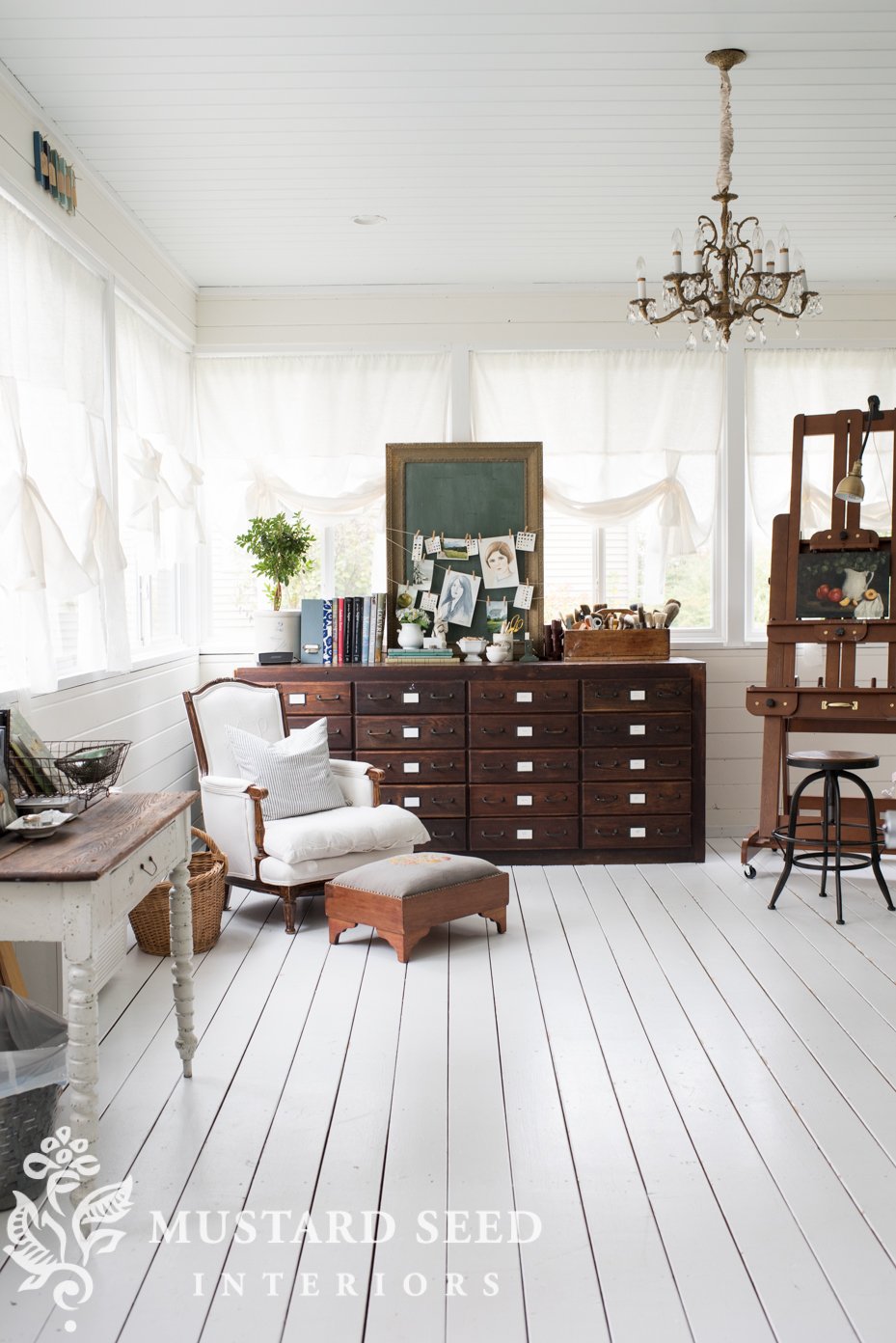 The easel will stay where it is and I’ll put some sort of a rolling table between the easel and chair.  I’ll use that as a flat work surface and a place to set up still life vignettes.  This is the one wall that I still feel a little iffy about.  I might miss having the hardware counter as a focal point right when I walk in.  But moving furniture around is free, so I’m going to try it out and see if it makes the space more functional. 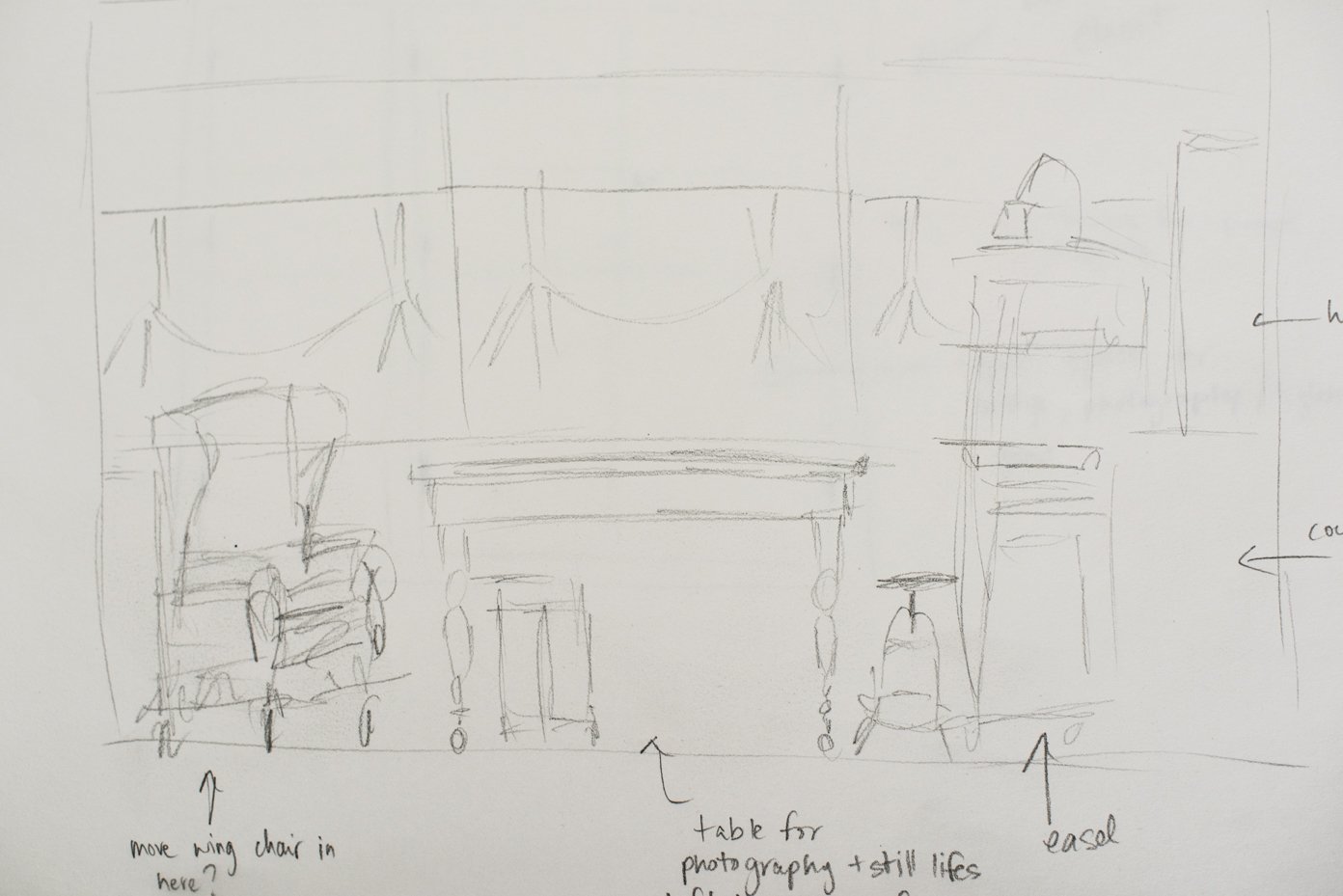 The drafting table will stay almost where it is, but it’ll be moved over some to allow for the larger hardware cabinet on that wall.  I’ve measured and taped everything out on the floor, though, so I know it all fits on paper.  We’ll have to move it all to see how it feels in person. 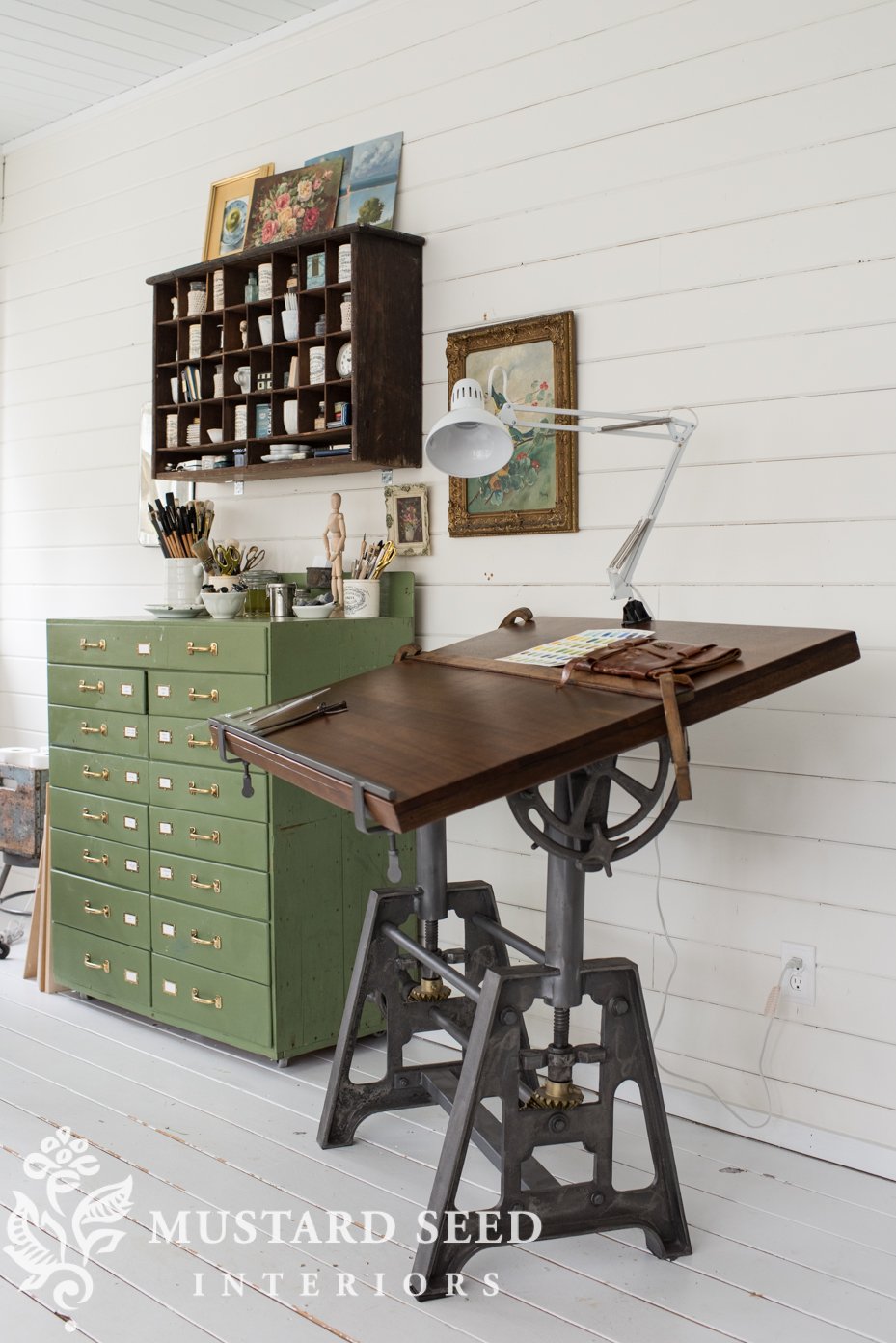 The goal of these changes is to have a more efficient and comfortable workspace that is visually cleaner and more conducive to creative endeavors.  The additional storage will also clear out some closets and cabinets in “personal rooms” that are currently holding work-related items.  A large part of that will be cleaning, purging and organizing.  I’ve been in this house for a year and a half now and it’s time to go through everything and get rid of items I brought along in the move, but haven’t ended up using.

Being under the weather has slowed me down a bit, but I can’t wait to get started!