This squared-shaped dining room has been a little tricky to figure out, but I think I’m getting a little closer.

The primitive blue hutch has felt wrong from the beginning, but it’s what I had and I needed time to live in the space and think about it before I bought anything new or made any big decisions.  After thinking about it for a while, I decided to try something free…swapping around the furniture.  I had an oak sideboard that I moved up to the master bedroom, really as a place-holder more than anything else.  I decided to move it back downstairs and try it out in the dining room… 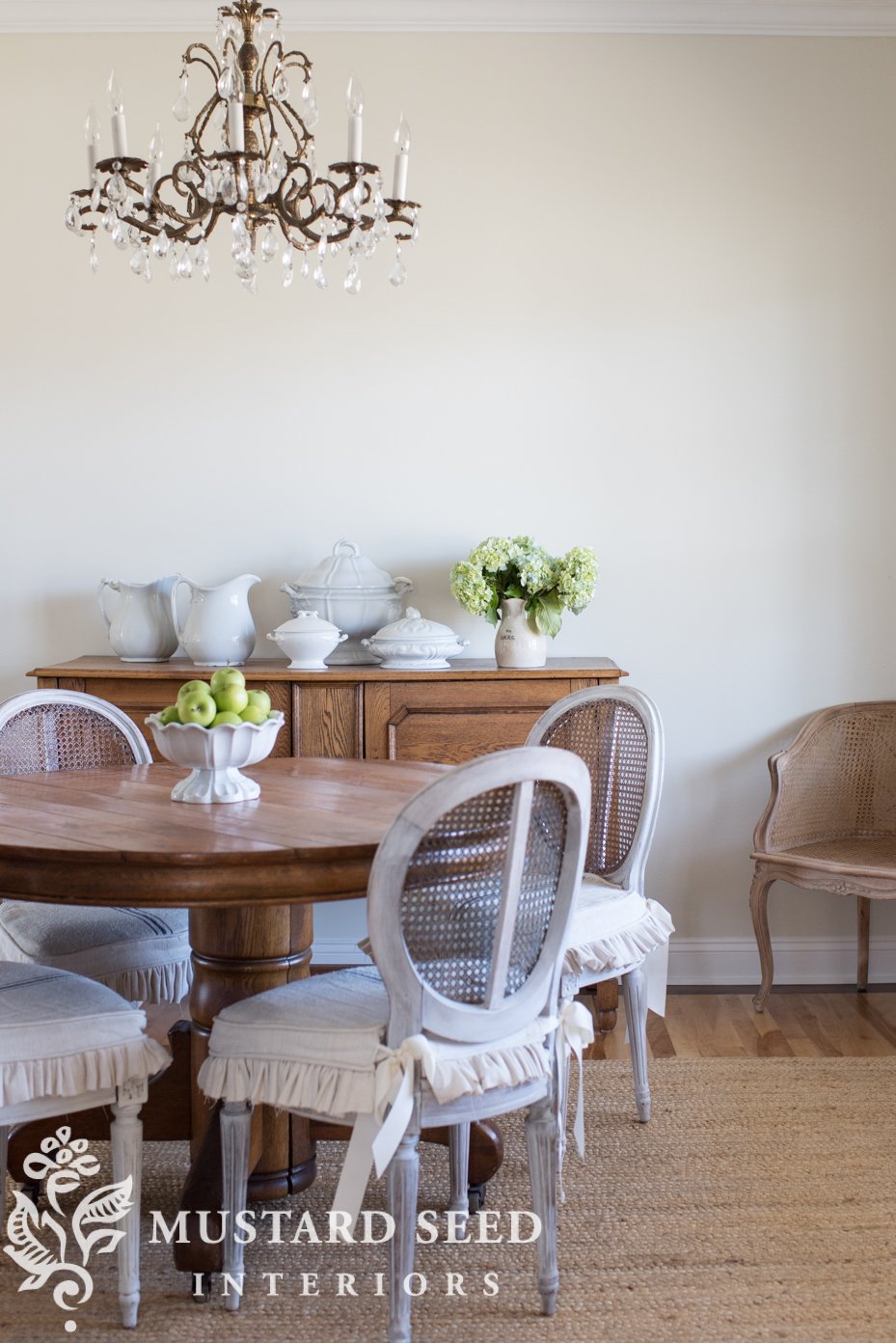 Obviously, everything is low and the space is a little naked, but I really like this option better than the hutch.  It seems to open up the room a bit more and the pieces of furniture, while found secondhand on craigslist and in consignment shops, seem to relate well with one another. 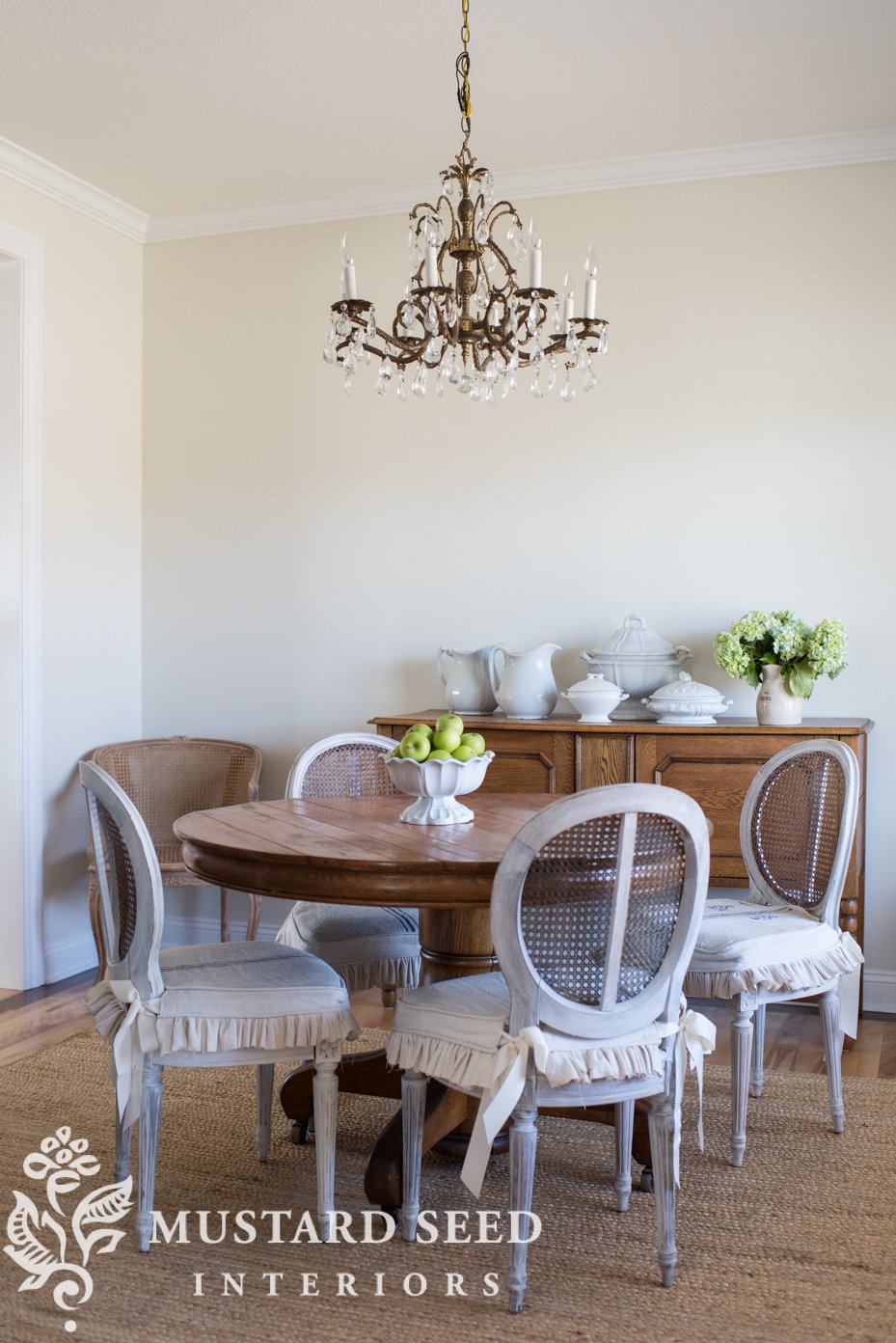 About that empty wall, though.  I was originally thinking about built-ins, but I have recently been imagining a soft, tonal landscape mural.  I am inspired by Susan Harter’s Muralpapers and would want to do something along these lines… 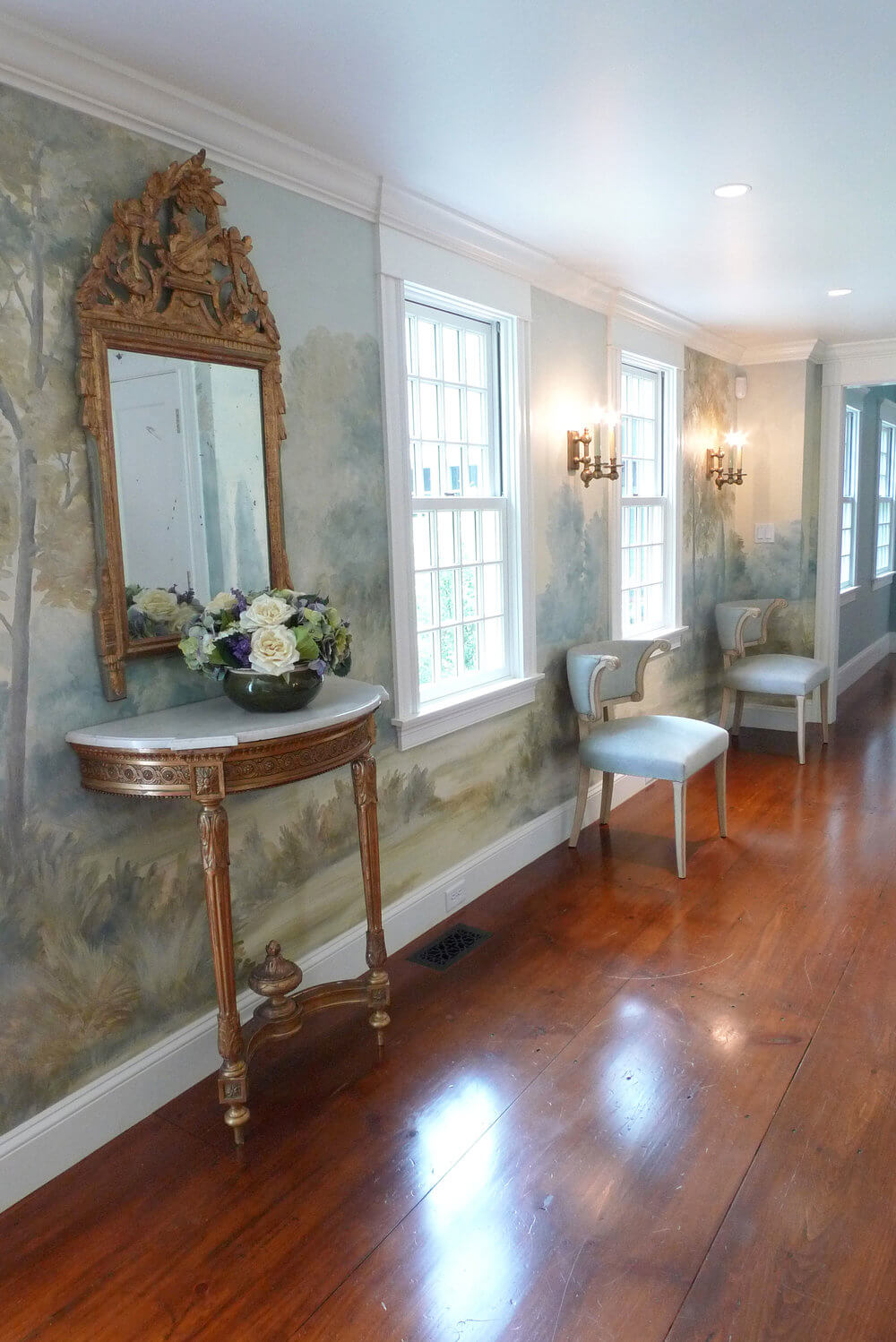 I have to admit that I am a little intimidated by a mural like this, but I think it would look amazing and will be worth the attempt.  If it’s terrible, it’s just paint and I can always paint over it and it never has to see the light of day again.

I’ll start drawing out the mural layout and establish the color palette, so I’ll be ready to paint when I have the gumption to go for it.

I am also on the hunt for an oversized mirror to hang over the buffet.  The way it will reflect the chandelier and bounce light will add a lot to the space.  I’m thinking of something like the mirror below, but I’m hoping to find one secondhand, so let the hunting begin and we’ll see what I turn up. 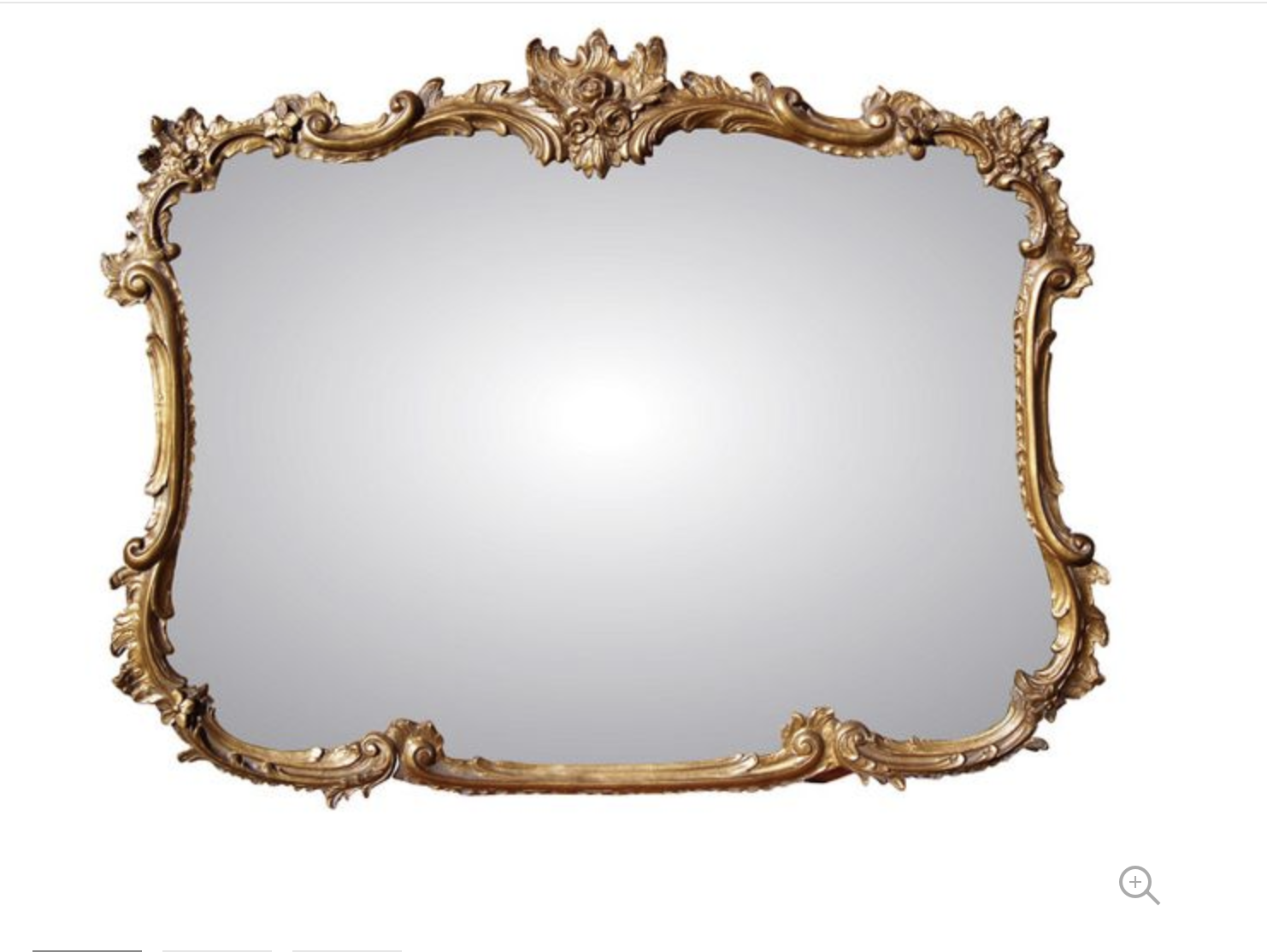 So, what happened to the primitive blue hutch?  I moved it to the other side of the room.  I like the height and the size is okay, although very close to looking like too-big-of-a-piece-wedged-into-too-small-of-a-corner.  A part of that has to do with the strong color, so I am considering two options…

1.) Selling it and buying something that works better in that corner or 2.) paint it in Farmhouse White, so it’s a little quieter in the space. 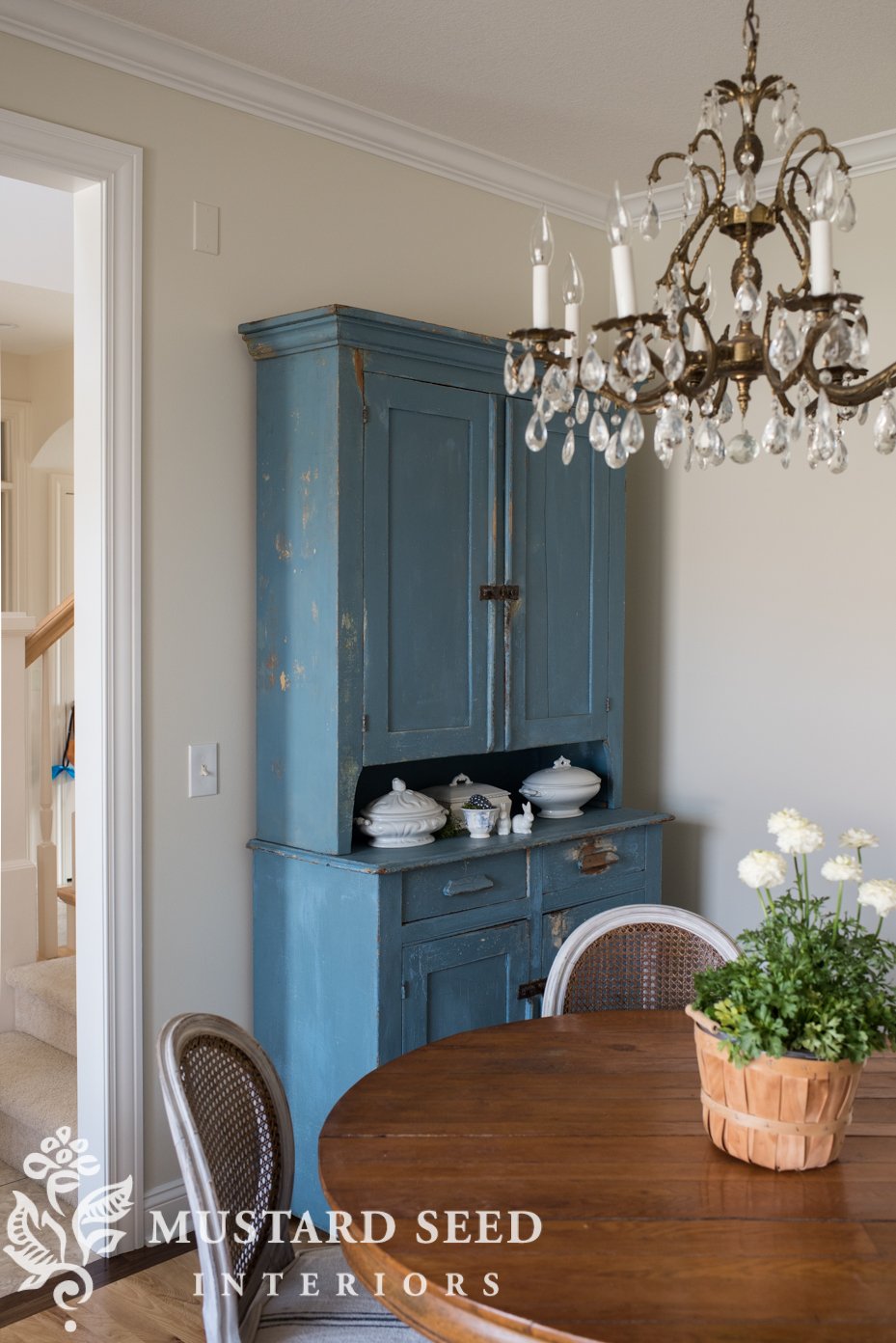 Don’t freak out about painting this hutch.  It is an old piece, but it has been painted several times and wasn’t wearing the original paint when I bought it.  Painting it would be just fine.  I love the piece in the blue, so I just don’t know if I want to paint it, but I also don’t think this piece works well in our new house as it is.

I had thought about looking for a corner cabinet for that spot, but we have an air return that is in an annoying spot.  It limits what can go on that back wall and a corner cabinet just won’t work. 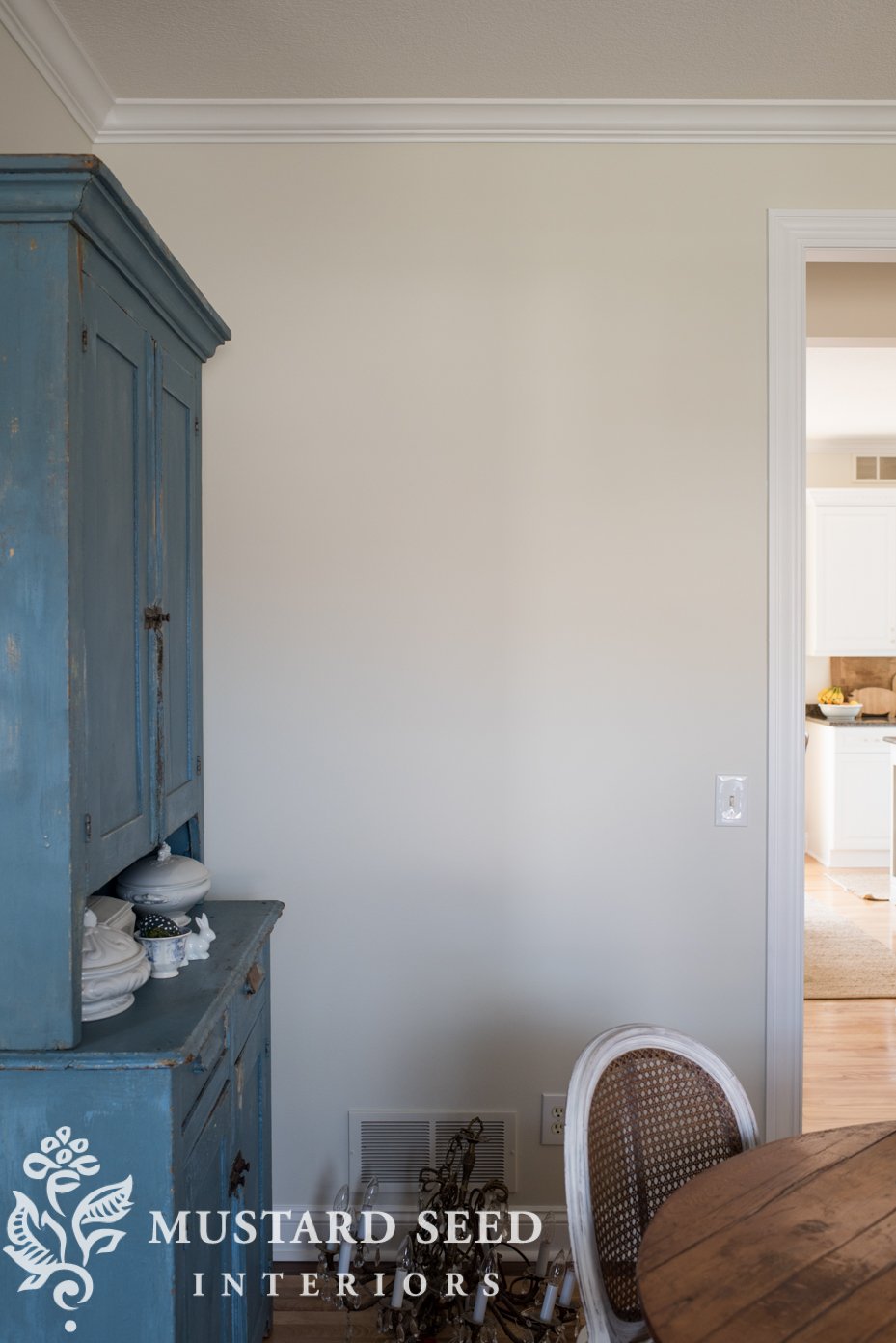 The mural would wrap around the whole room, though, so it would visually fill up that wall.