Over the Christmas break, I did a lot of intentional sitting around.  While I’m not typically a sitter-arounder, but was much needed and I embraced the slower pace.  I didn’t want to be entirely idle, though, so when we weren’t playing a game or doing something together as a family, I pulled out my yarn and bag of hooks and crocheted.

I made a pretty pair of wool mittens since the first pair I made was out of the wrong kind of yarn and ended up being so large that they slid off my hands when I attempted to wear them.  They were good practice, though, so these could turn out better. 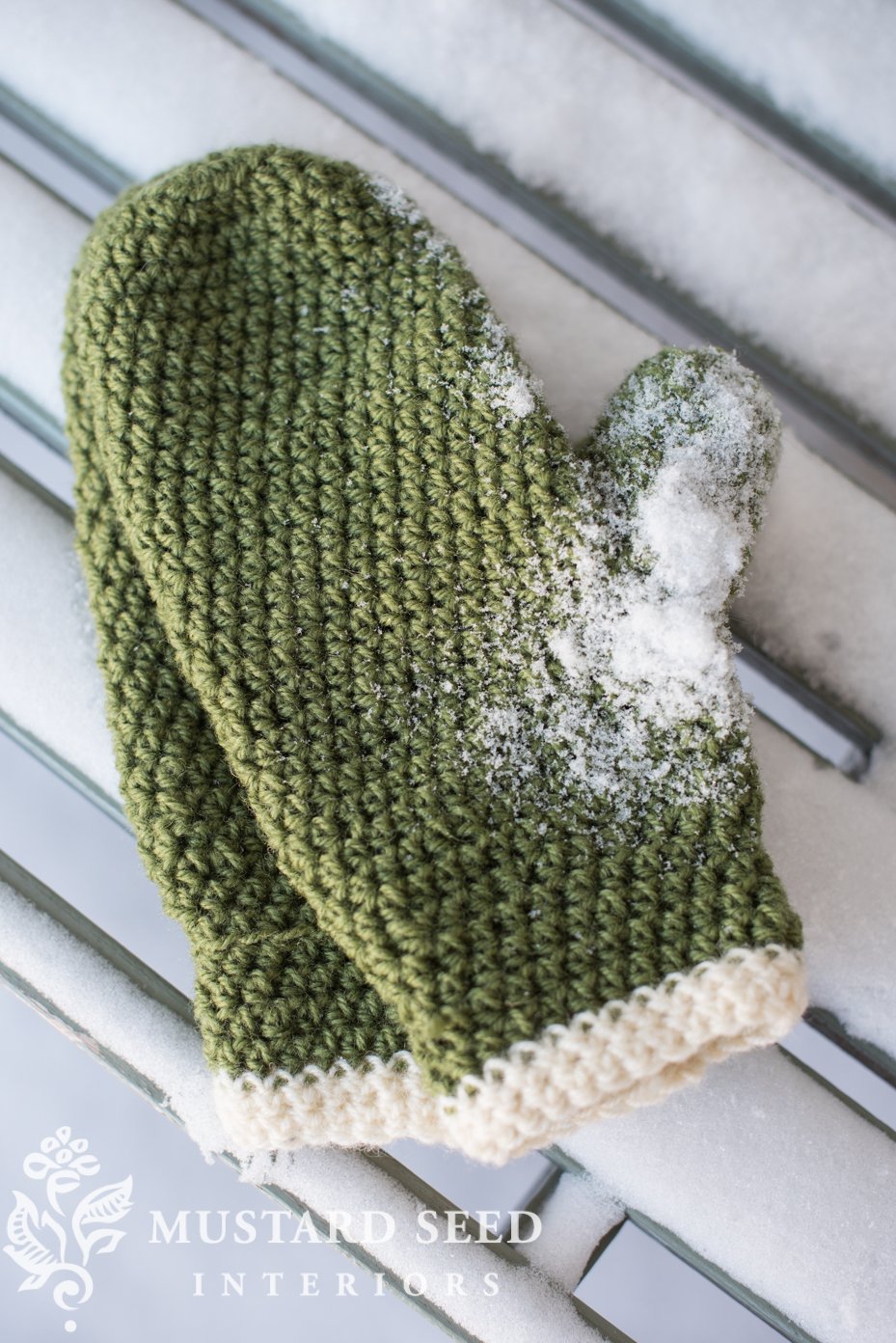 I followed this video tutorial…

…and I’m very pleased with how they turned out.  I’ve worn them a few times and they are warm and comfy (well, when it’s not too cold or windy here in MN.  For the sub-zero days, I need a pair with a liner.)

I made my gloves a little longer in the wrist by adding a few more rows in a pretty cream yarn.  I’m planning to make a hat out of the same green yarn with cream trim and a cream faux-fur pom. 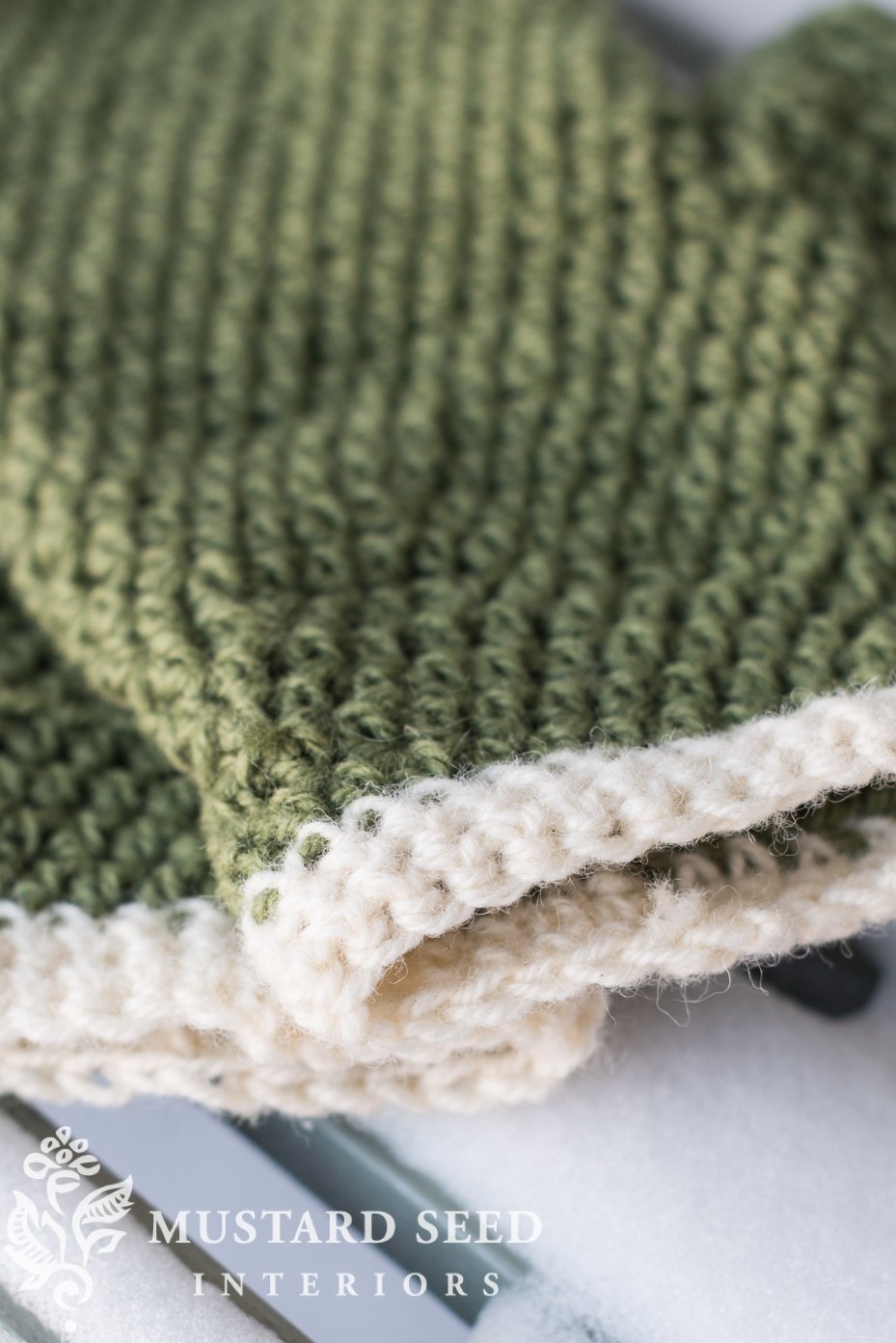 The yarn I used was purchased from Ingebrestsen’s, a nordic marketplace that carries wool yarns for knitting and crochet.  The Rauma yarn ended up being the same weight as the yarn the instructor used in the video tutorial, so it was perfect.  They are small skeins, so I wasn’t sure how many I would need, but I was able to make both mittens with one skein. 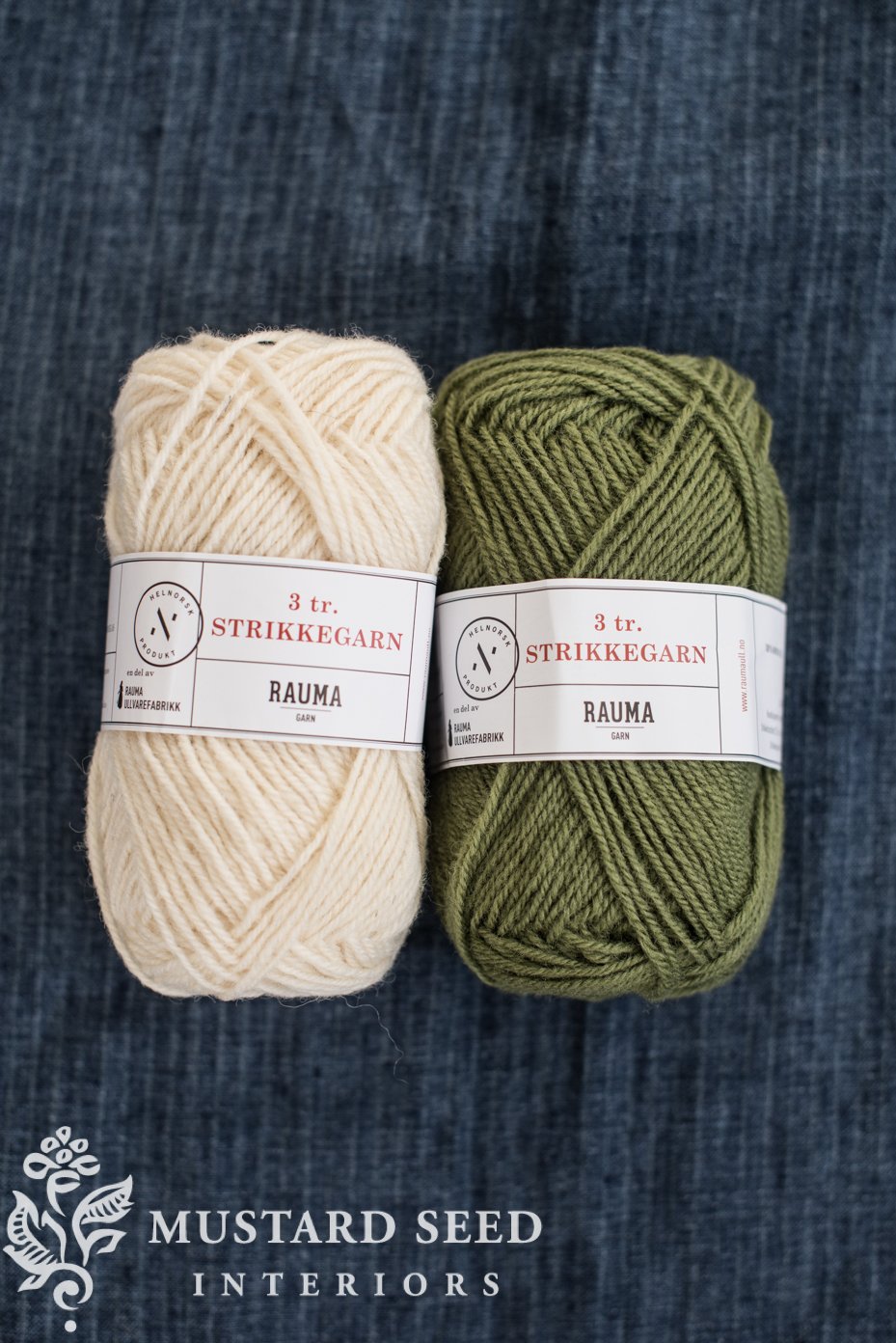 As with all the things I make, they are not perfect, but they are perfect enough and the next pair I make will be even better. 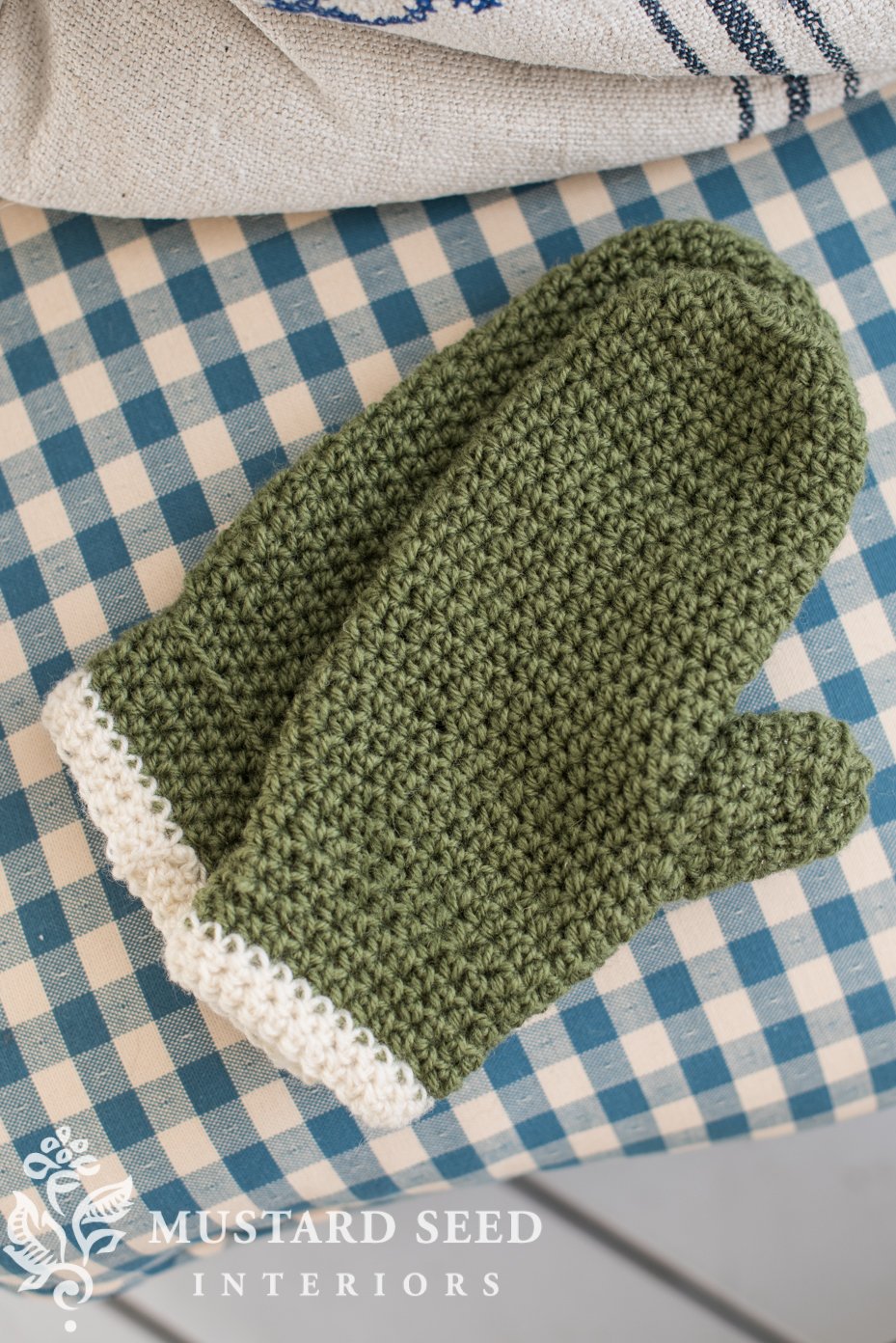 I also made a ton of dishcloths!  The stacks of them in my kitchen are getting almost comical.  They are a great way to practice stitches, though, and easy to make while I’m watching TV.  It’s hard to pay too much attention to a pattern when my focus is split.  Practicing stitches also helped me realize I had a UK Crochet book and a US crochet book that I was bouncing between and I was getting so confused as to what’s what!  I finally have it sorted, though, and learned the US treble stitch instead of the UK, which is a US double crochet. 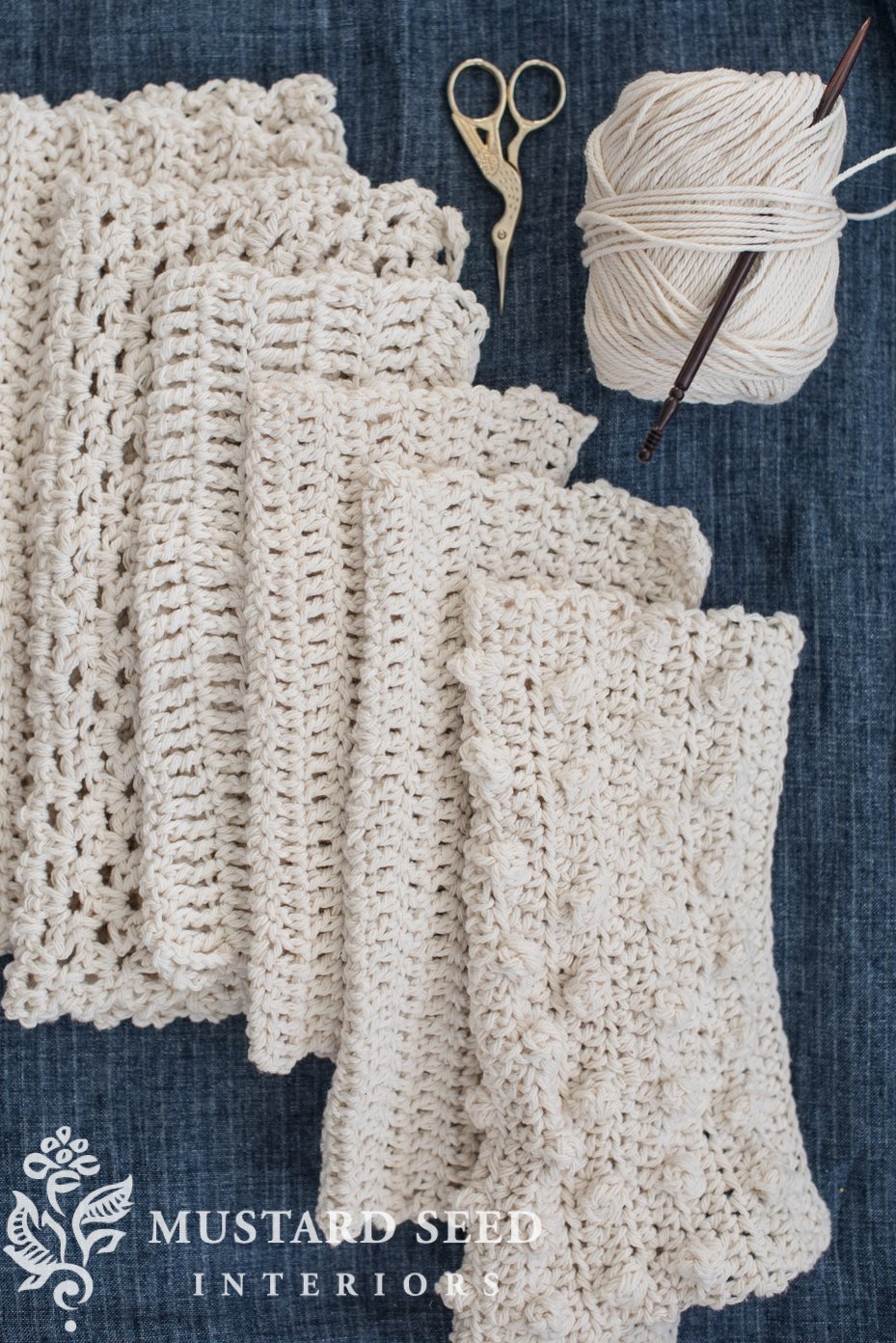 I played with alternating stitches and creating different patterns.  I even learned a pom-pom stitch, which I thoroughly am smitten with. 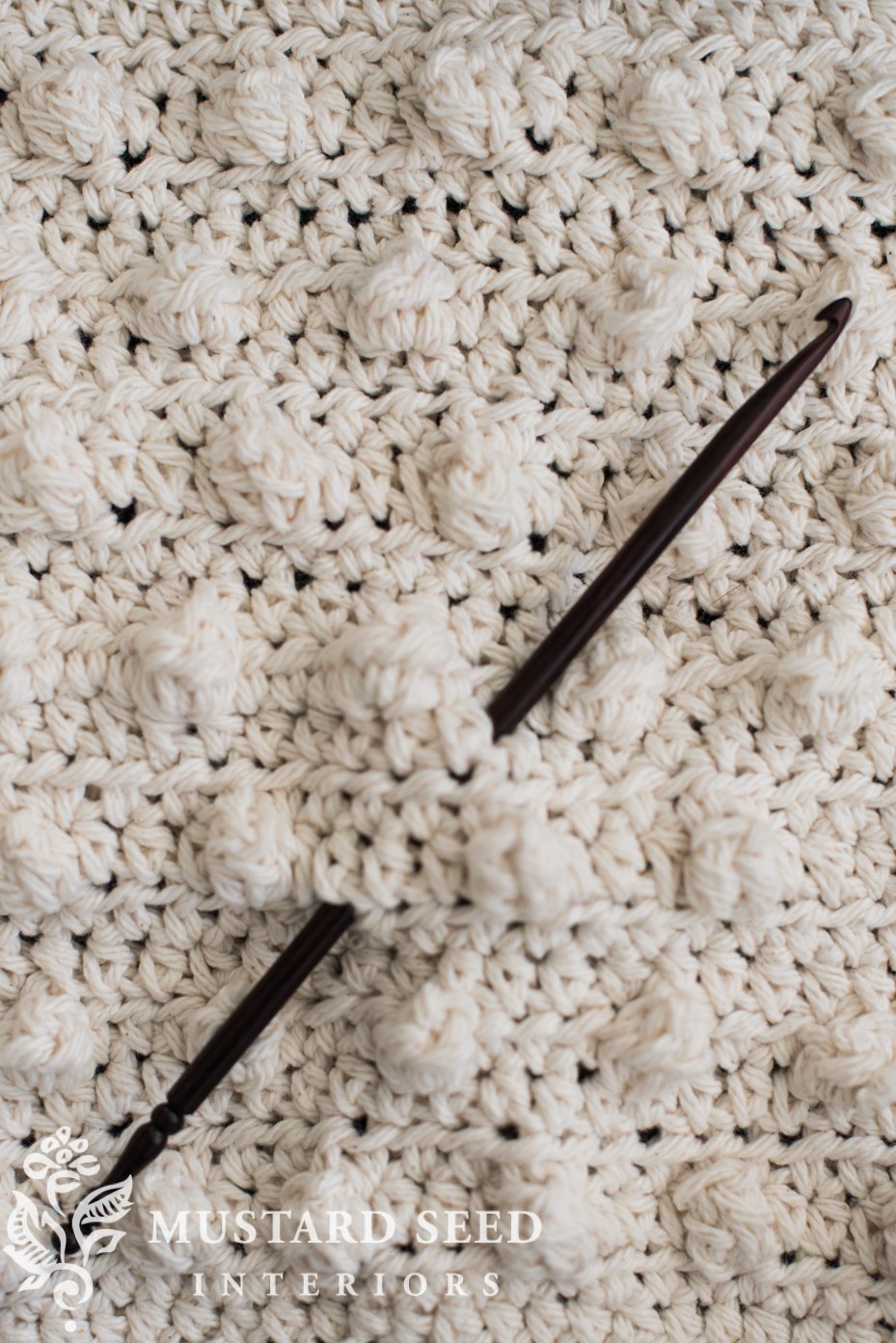 Jeff bought me some pretty rosewood crochet hooks from Etsy.  You can find the one photographed HERE.  I use a size 5 hook and the Sugar n’ Cream cotton yarn in Ecru. 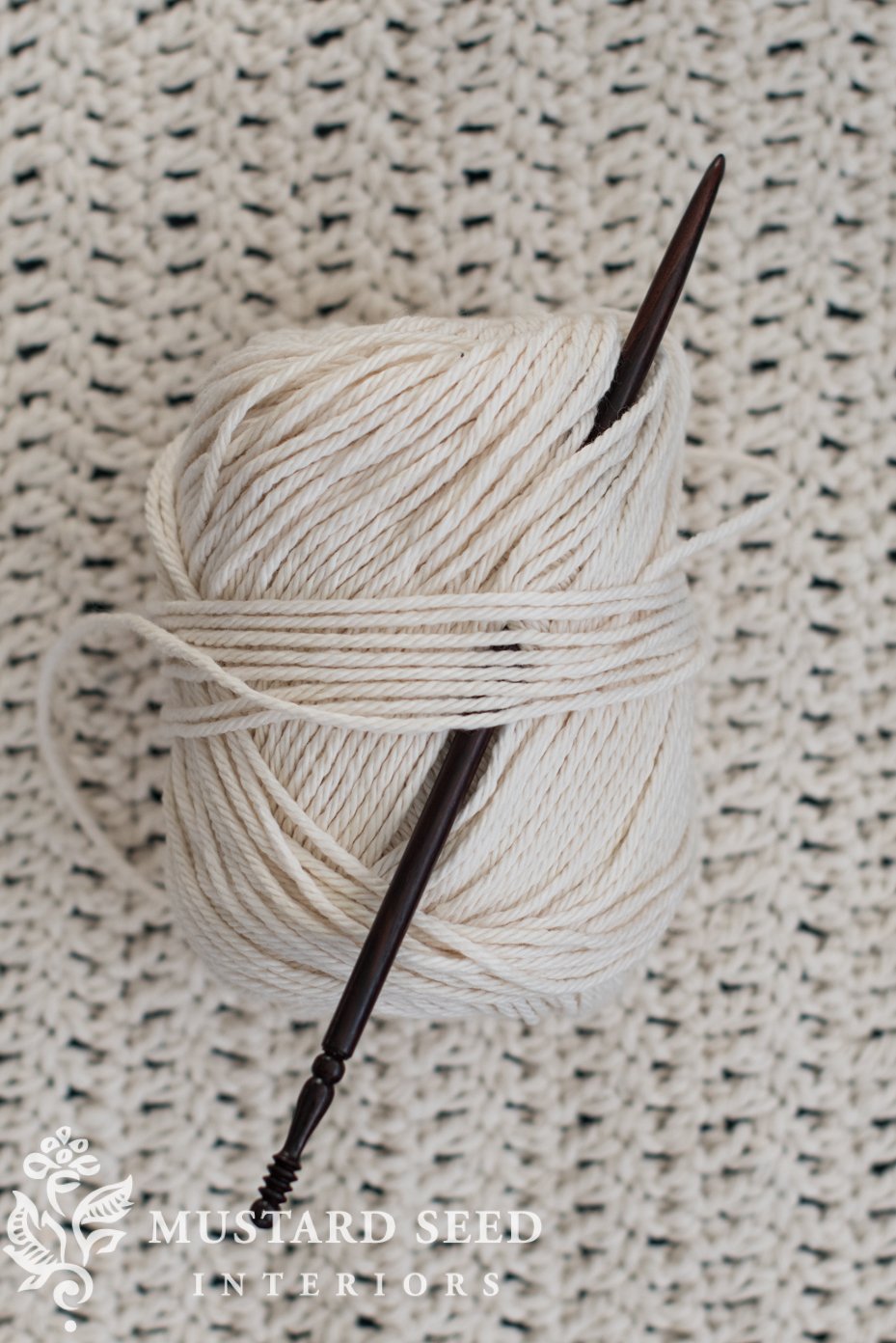 The thing that I’ve been most pleased with is seeing my progress in the consistency of my stitches as well as the shape of the pieces I make.  The dishcloths are actually square! 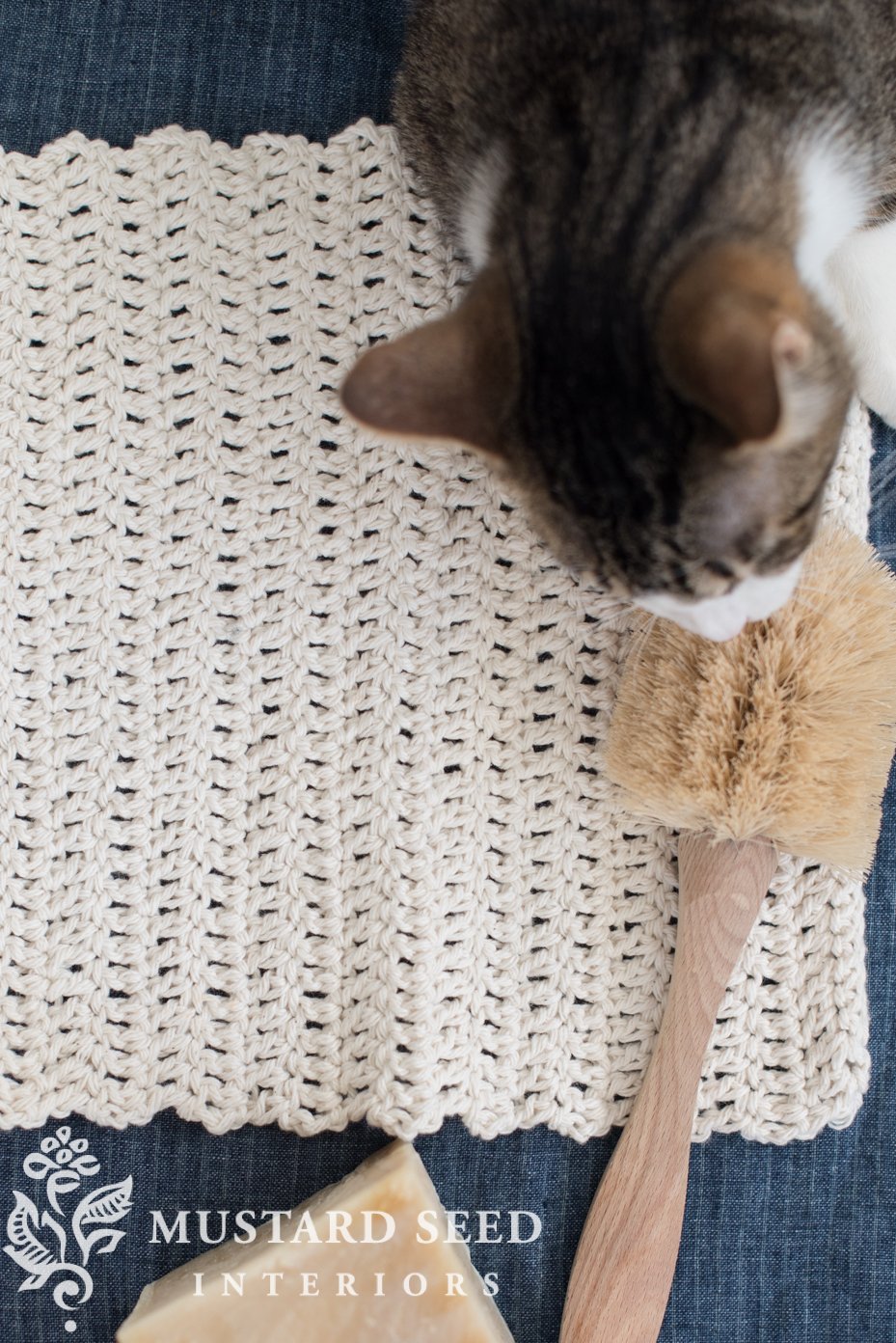 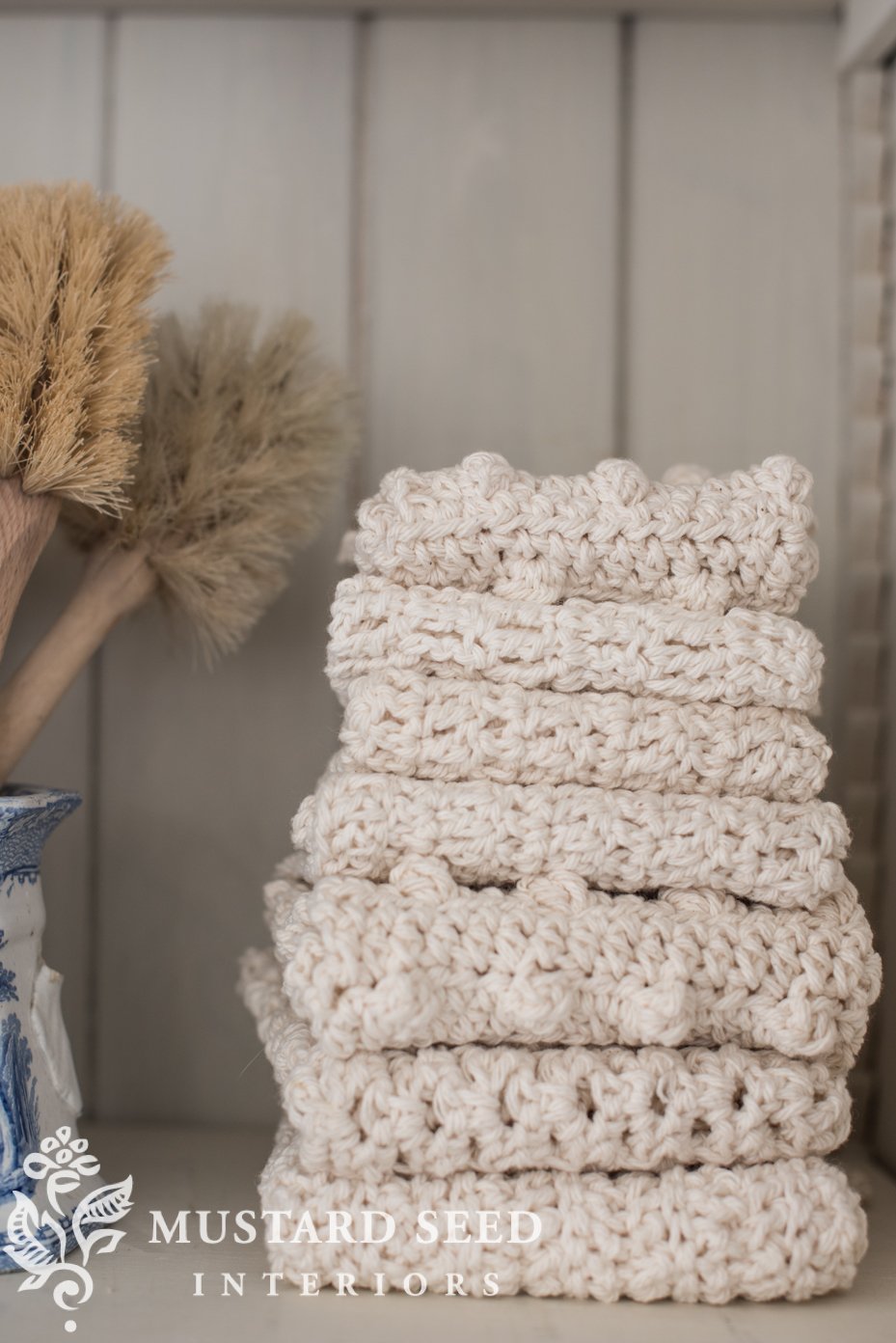 And I love using them!  I find that I’m using paper towels less often, because I use these for cleaning the counters, wiping out the sink, etc. 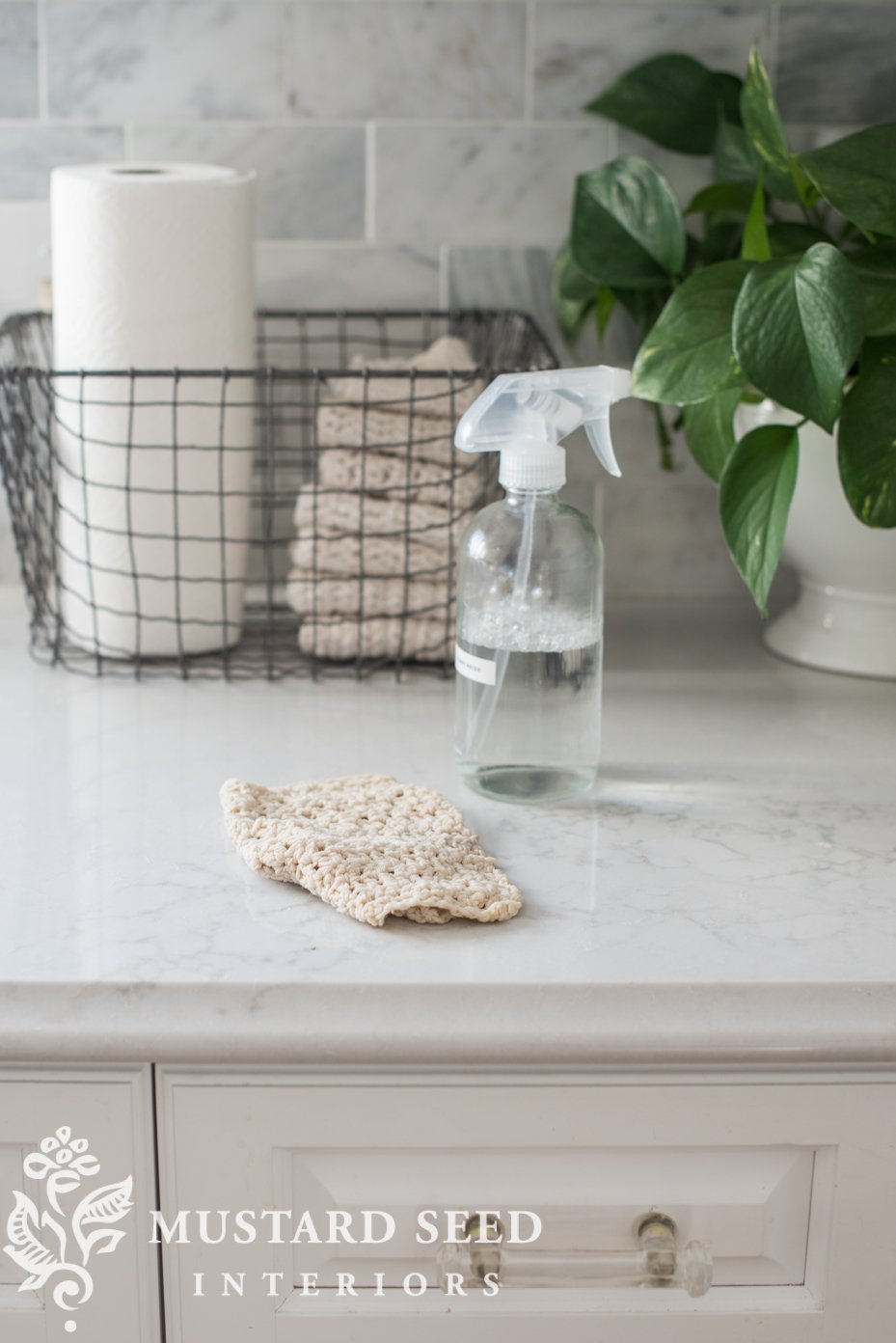 And even after a few uses and washes, the cream ones don’t look too bad.  I was concerned about staining, but they are holding up pretty well so far.  We’ll see how they look in a few months! 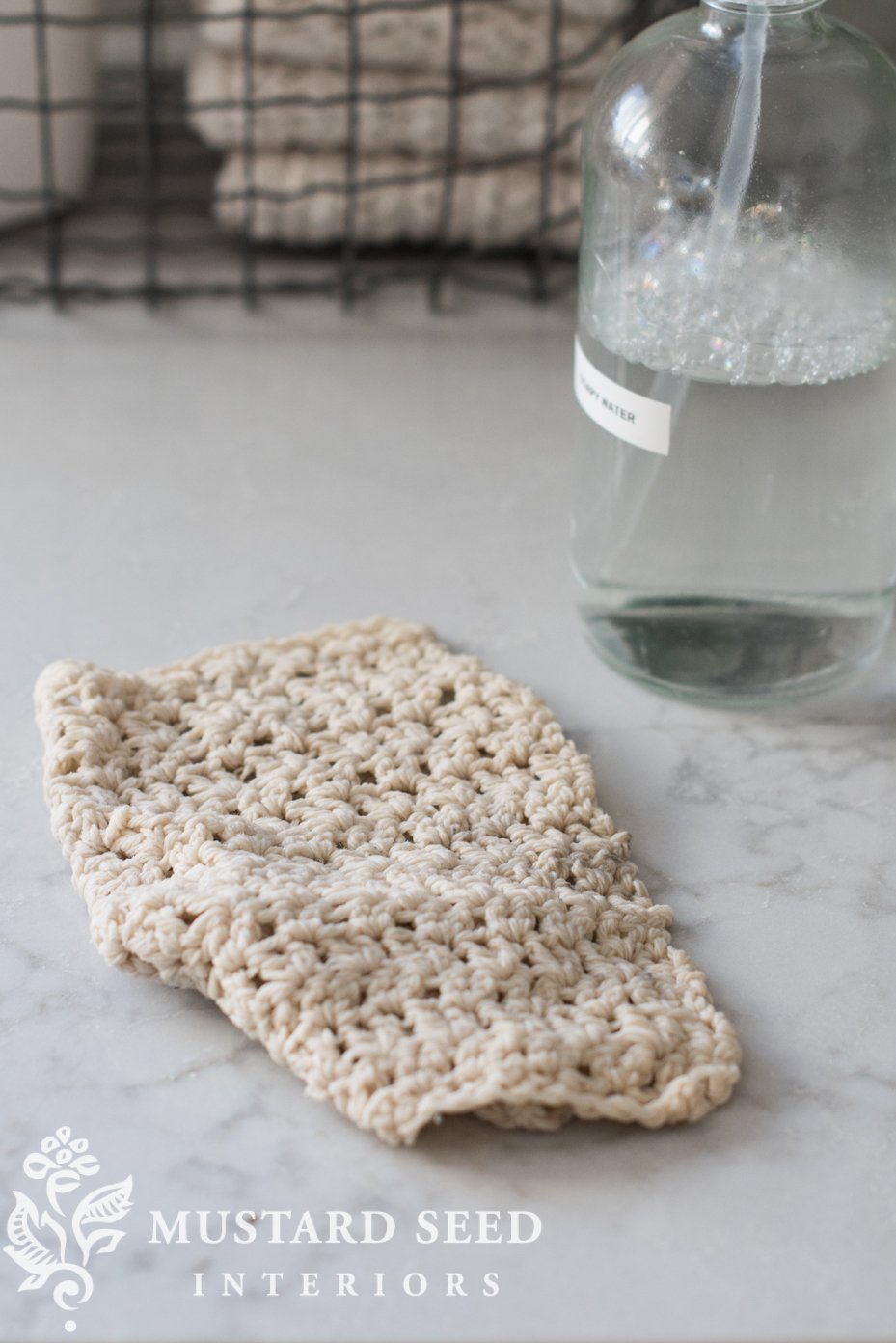 The next projects on my list are a hat to match the mittens and a pair of Nordic-style knee-high socks!  I ordered some wool sock yarn from Ingebretsen’s for those.

One funny thing…as I was trying to get pictures of the dishcloths, everyone wanted to “help”. 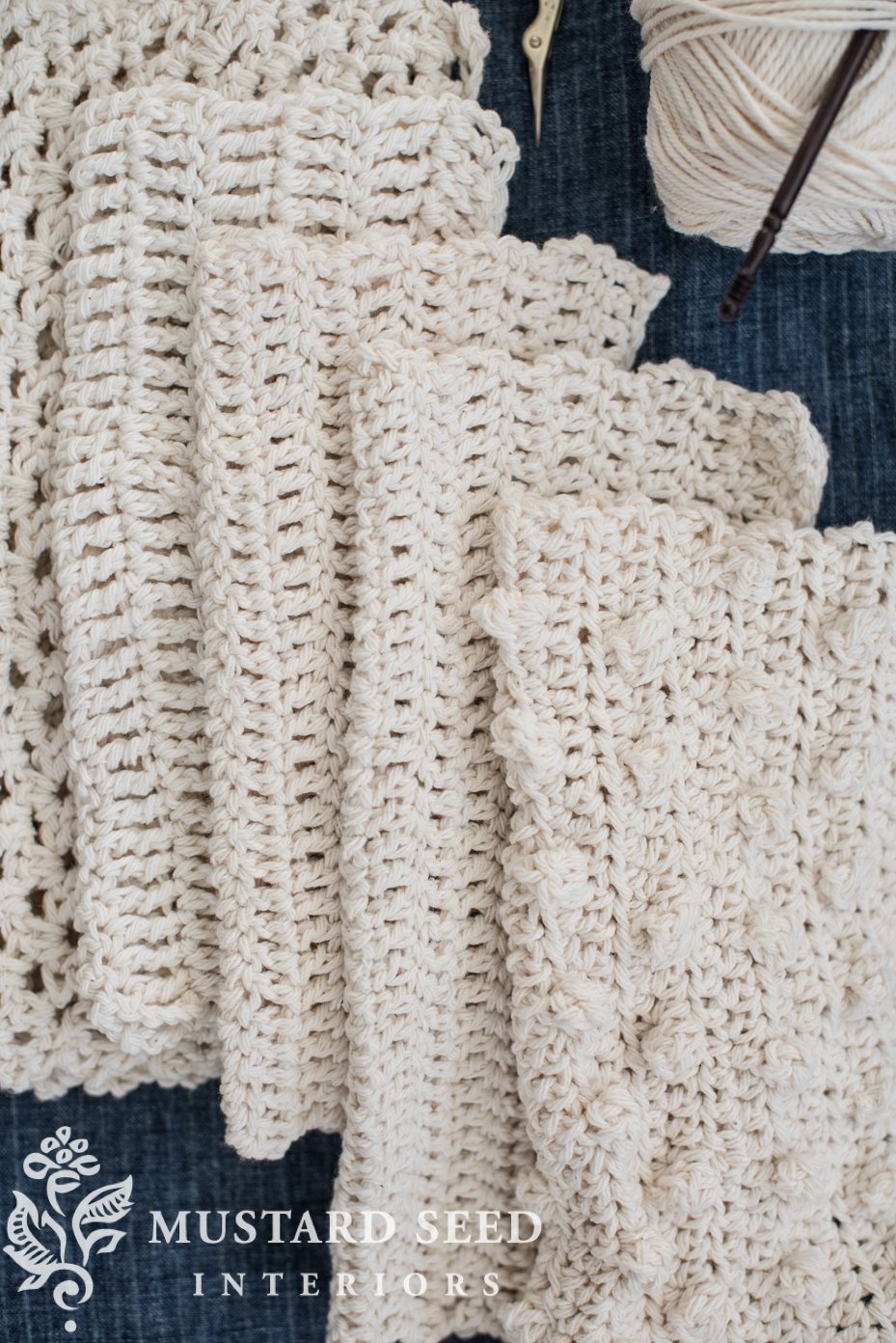 Both cats were rolling around, batting the yarn and laying on the dishcloths like they were a little bed put there just for them.  Sebastian was lumbering back and forth over kicking the ball of yarn, exciting the cats even further. 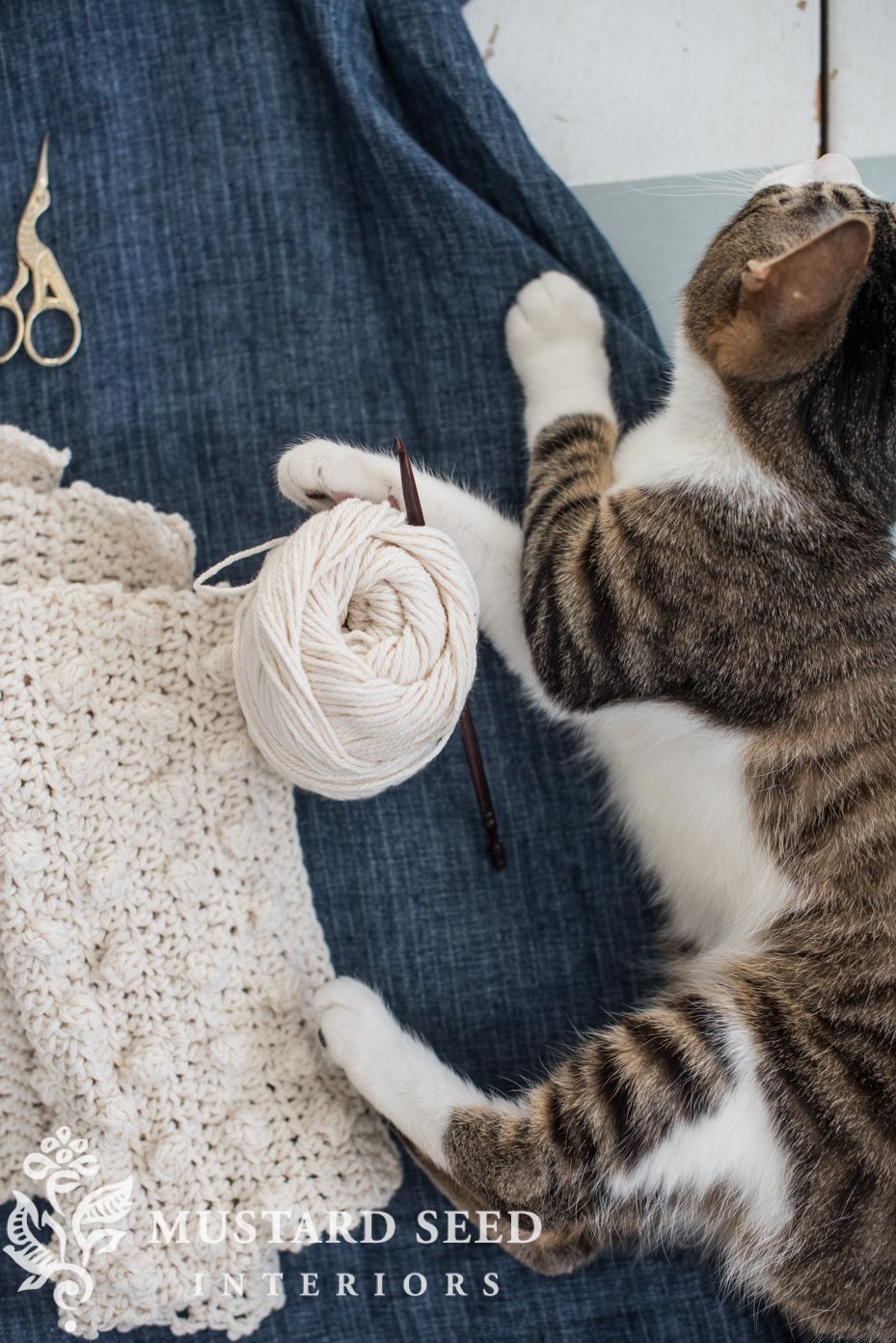 Calvin was observing this and thought it was hysterical, so he joined in. 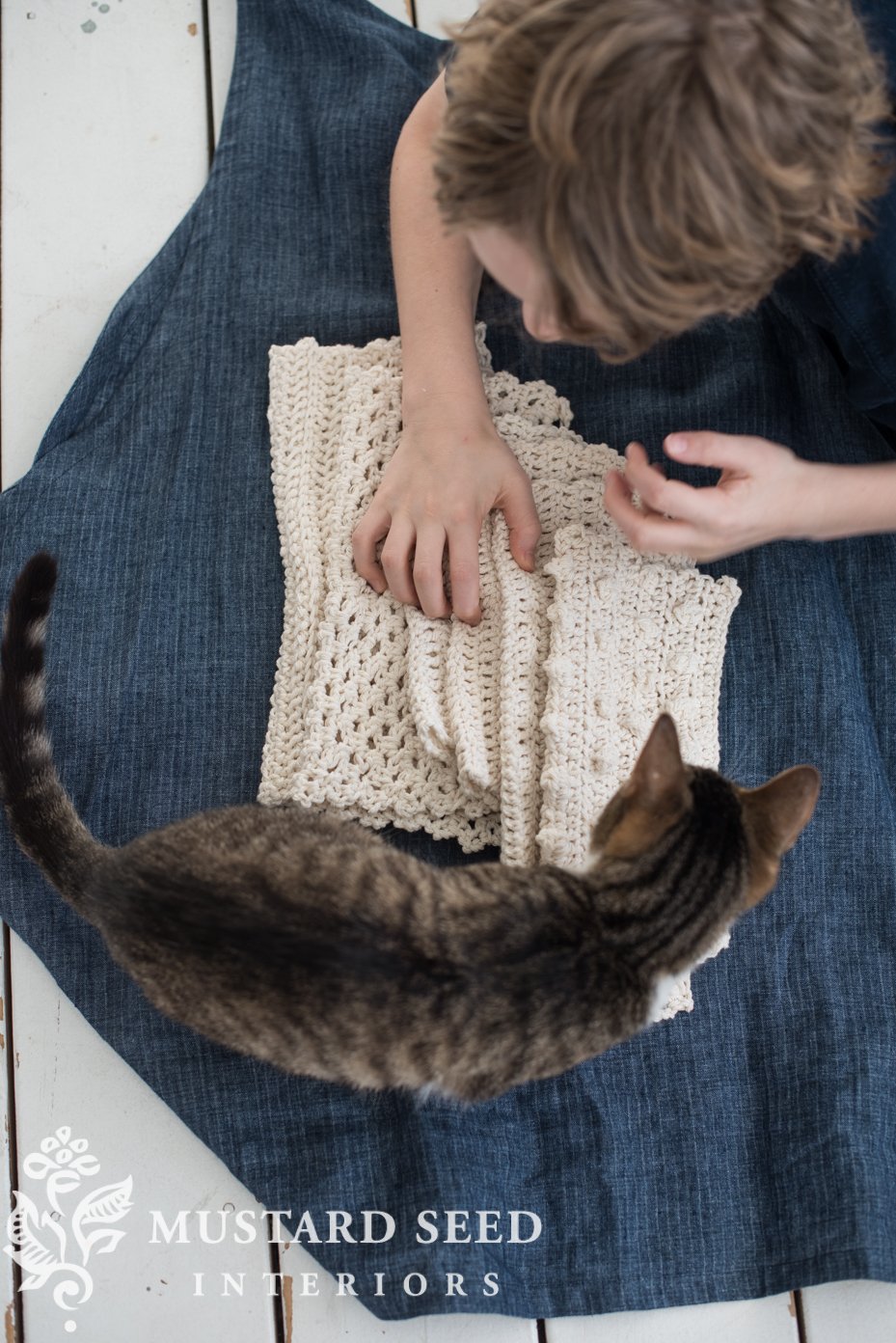 I just stood there, holding my camera at my side, rolling my eyes.  It was funny, but I was trying to get something done.

I coaxed everyone out of the studio, closed the door, and finished my work with an audience watching me through the glass door.  Mom is no fun.

Several of you have mentioned picking up crochet after years or learning how to knit or crochet for the first time.  Has anyone started?

PS – You can find my favorite resources for beginning crocheters HERE.