This story involves Jeff finding a snake in our kitchen, but that’s not where the story starts.

Last week, I purchased a beautiful antique dresser off of craigslist for $50.  I was cruising the furniture section on a whim and spotted it.  I could tell from the shape and finish that it was an oldie and, since it was less than a mile down the road, I decided to jump at it.

This isn’t the spot where it’s going to, by the way, but we just put it there until we find a permanent home for it (there are several spots in the running.) 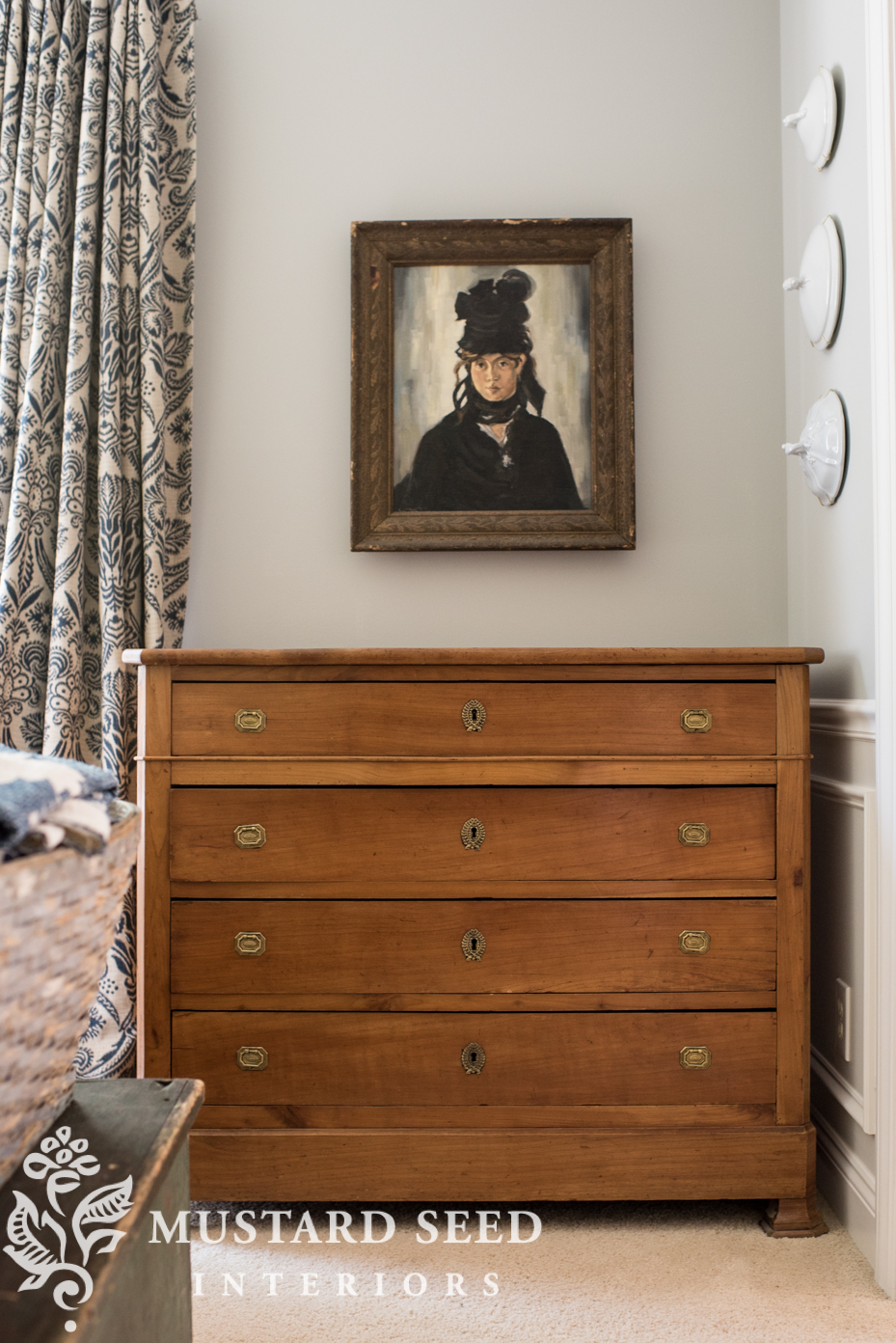 The wood has the most lovely patina on it… 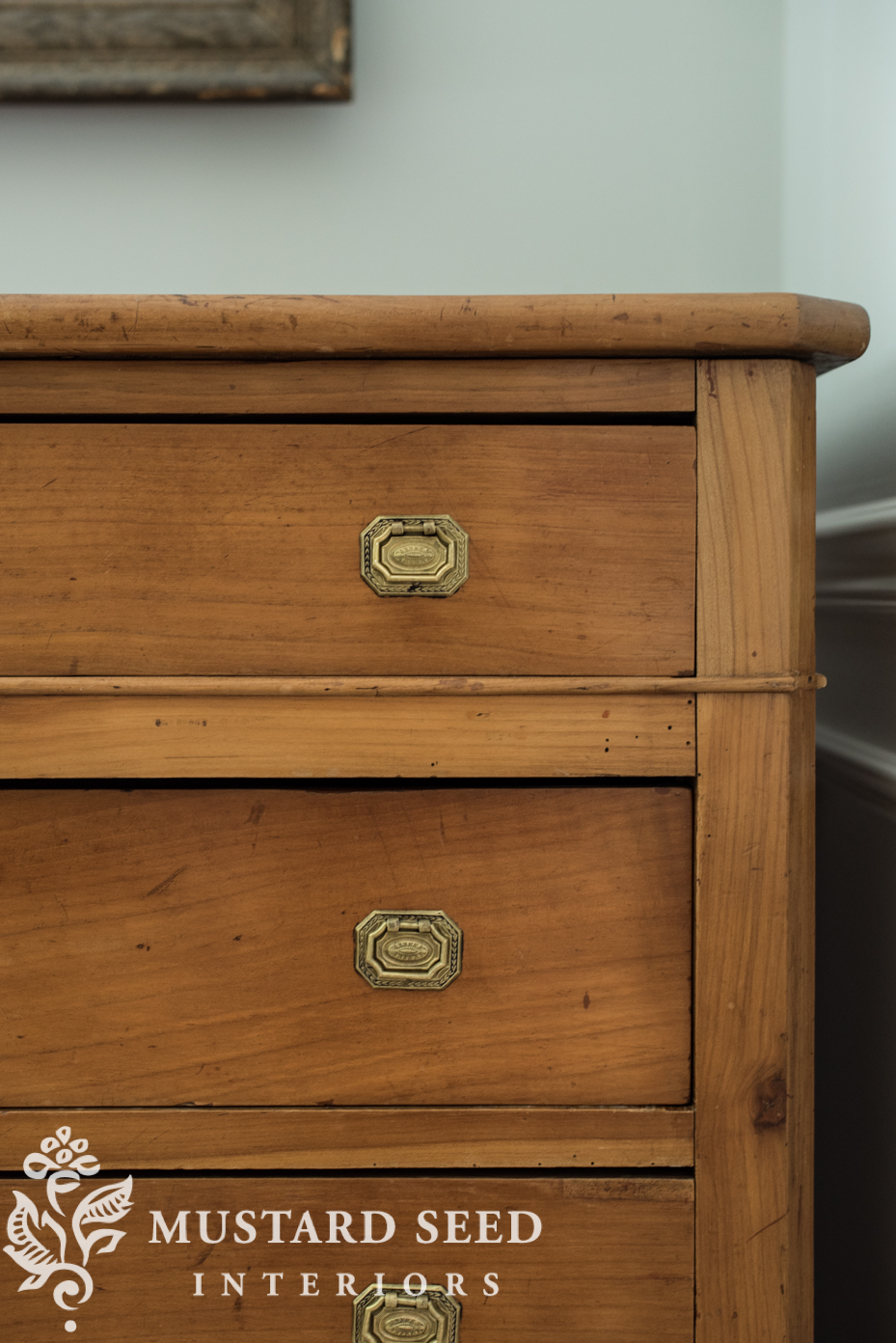 …and I love the unique details, like the shape of the feet. 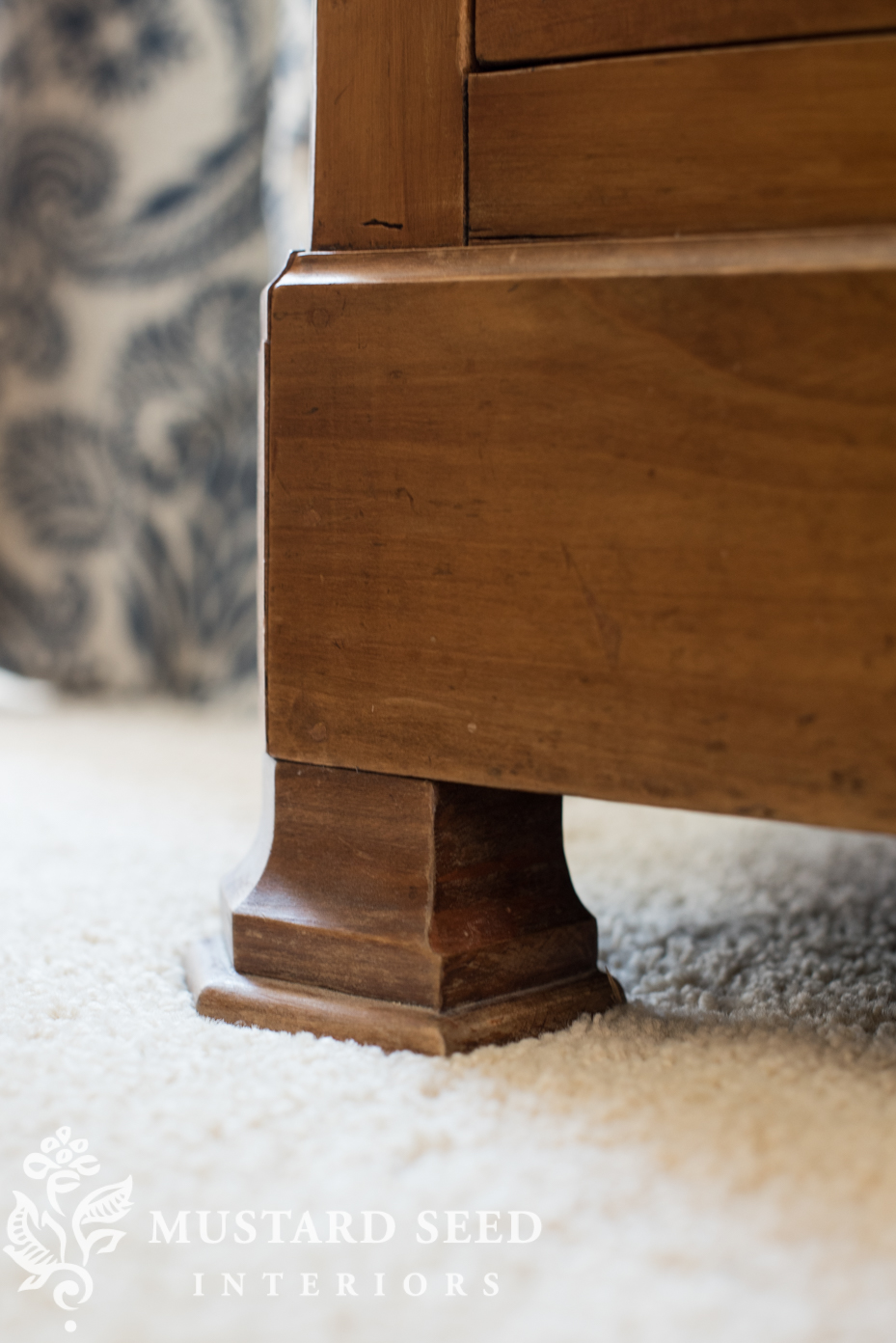 I even like the patched-together top.  I believe this originally had a marble top, but perhaps even had a hutch top.  Although there is no pull-out writing surface, it could’ve been a part of a secretary desk or a two-piece highboy.  I think it’s lovely as is, though.  It just needs a little MMSMP Hemp Oil to hydrate the wood and bring out the luster in the wood. 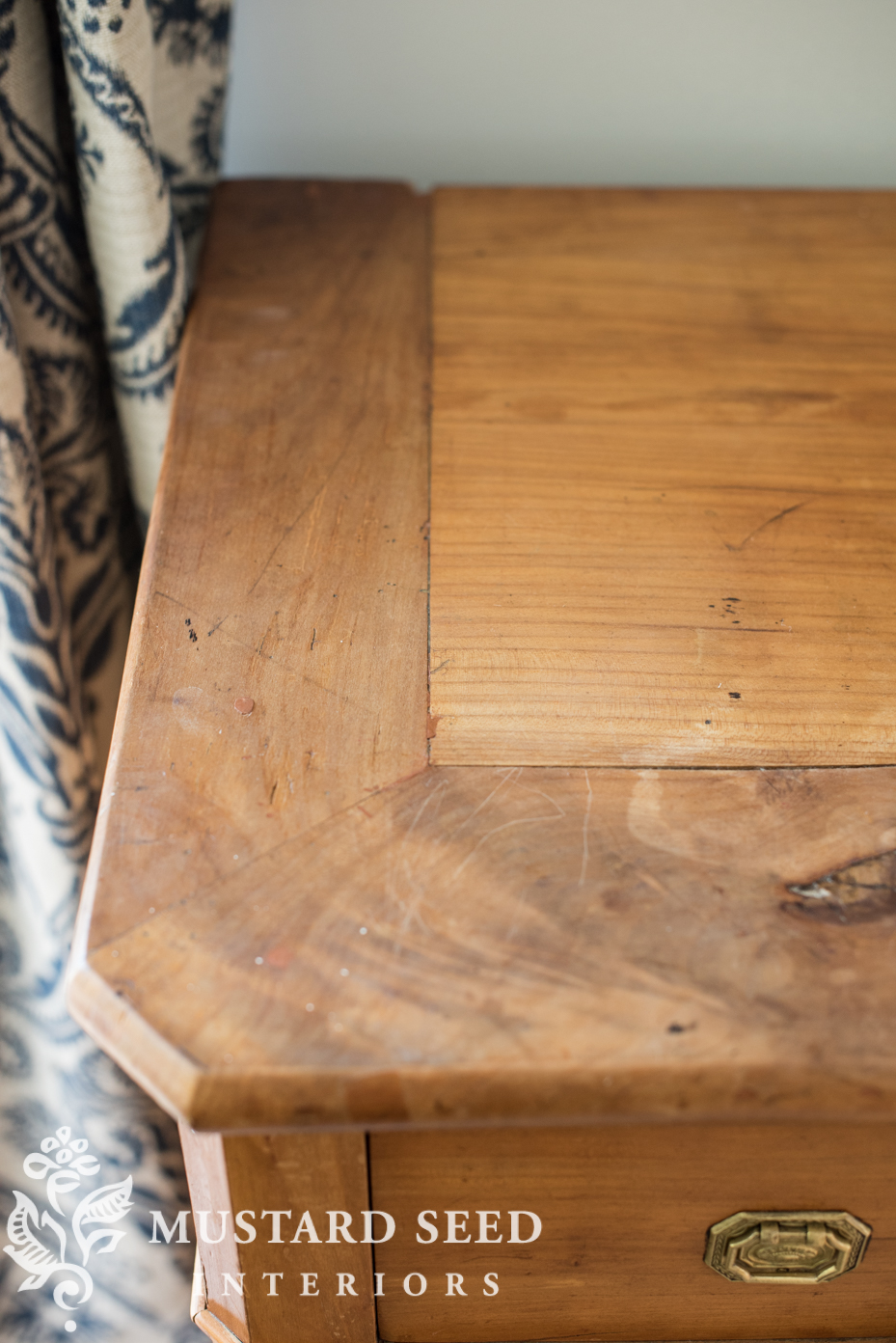 The drawer pulls and key escutcheons are old, but I’m not sure if they are both original.  They look a little disjointed to me, but sometimes that’s the case with old piece.  I like both of them, but I’m not sure if I like them together.  I might try removing one escutcheon to see how that looks.  The raw wood keyhole might look more fitting for the age of the piece. 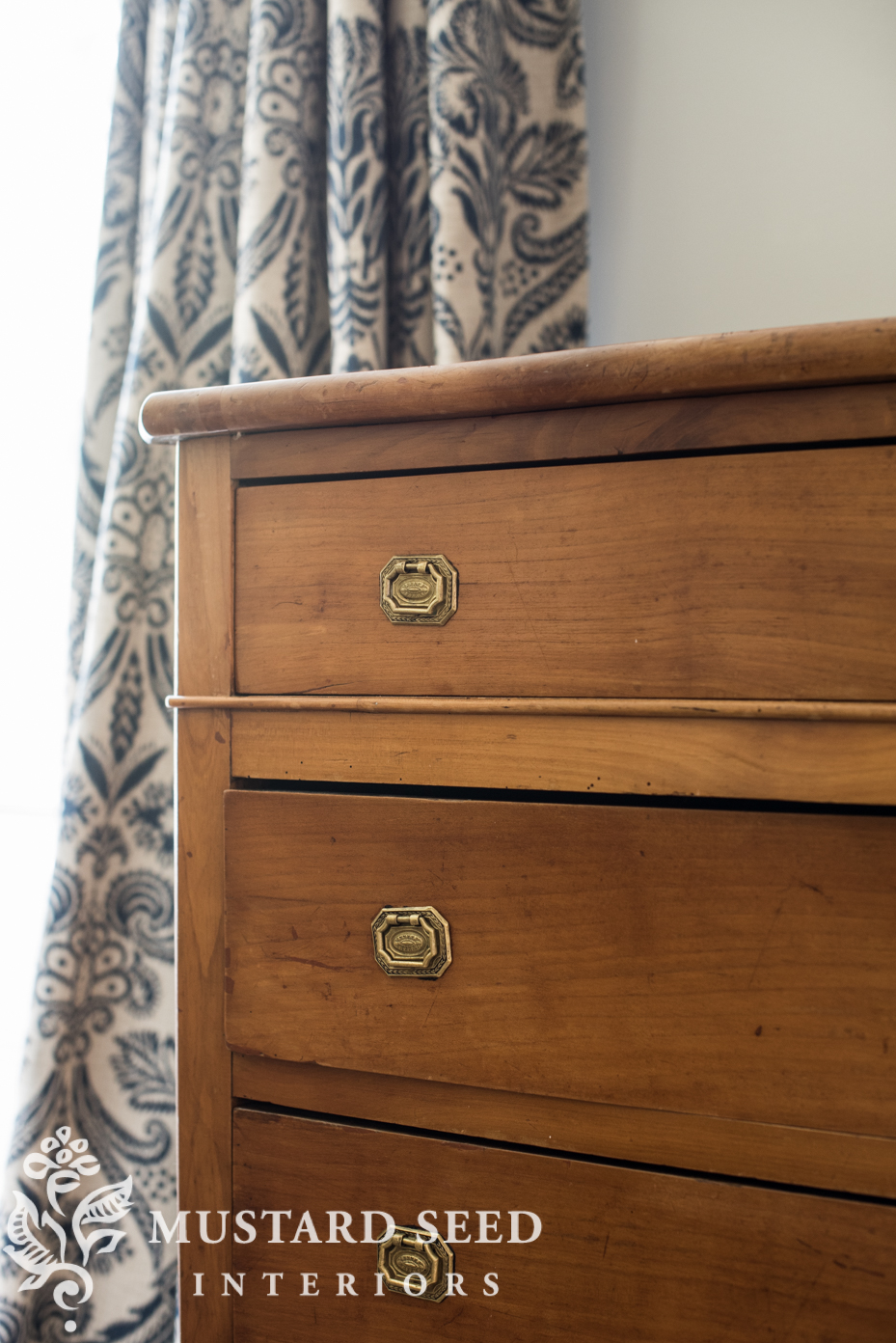 Anyway, so the day after we bring this dresser in the house, I’m working in my studio, blissfully unaware of the fact that Jeff found a 12″ LIVE black snake coiled on the floor of our kitchen.  Fortunately, he’s not afraid of snakes, so he calmly picked it up in a wad of paper towels and threw it off the deck.  I didn’t find out about the snake until hours later.

As we were puzzling through how the snake could’ve gotten in the house, Jeff said he was sure it came in the dresser.  Oh sure, blame it on the used piece of furniture!  In reality, I suppose it could’ve been possible since it had been stored in a garage prior to pick up, but I found it unlikely since we removed all of the drawers to move it.  I feel like the snake would’ve made an appearance then, but maybe not.

The funny thing about this is that this is not the first time Jeff blamed something on a used piece of furniture.  I had moved another piece of furniture not long before the dead mouse was discovered in my van last summer and Jeff thought it was the culprit.  Not from the plants I bought at the garden center or one of the many mice scurrying around our yard.

A used piece of furniture just needs to be prepared to be the scapegoat for critters when it comes to the Parsons’ house.

53 Comments on “blame the used furniture”