how to make a ruffled bedskirt (with a no sew option)

I had several questions on how to make the ruffled bedskirt I had on the antique iron bed frame, so I thought I would make a tutorial. 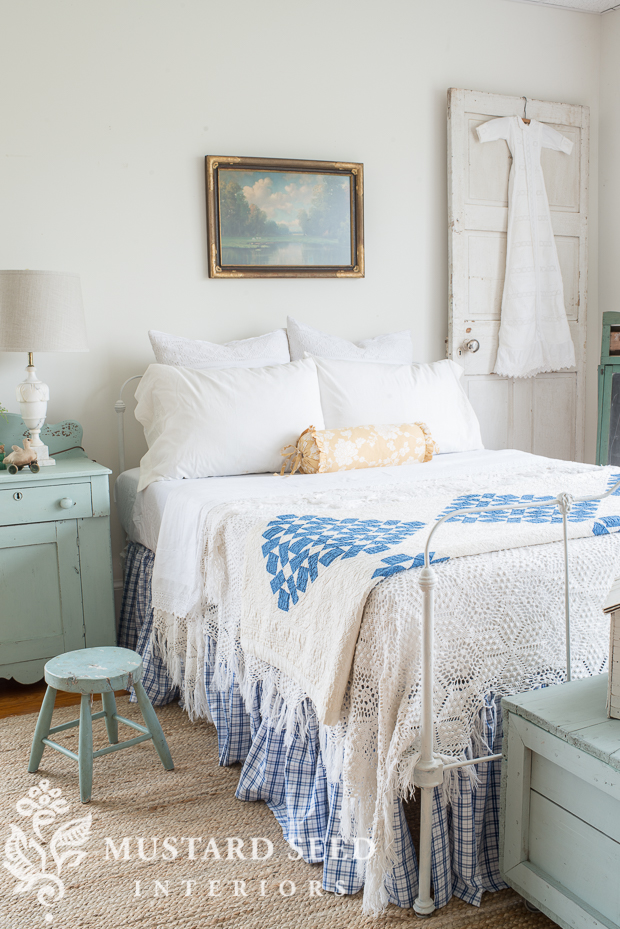 Bed skirts are the kind of thing I’ve always preferred to make myself.  I feel like most store-bought versions are skimpy on fabric and are rarely exactly the right “drop” or length, so I’ve opted to make my own for years.  Even before I was sewing with any amount of proficiency.

This is the kind of thing you can no-sew your way through and no one will ever know.  I’ll let you know the no-sew steps when we get there.

So, you start with a piece of fabric that will fit between the mattress and the boxspring.  A cheap flat sheet is a perfect option, but it can be any kind of fabric you have on hand, because it won’t be visible. 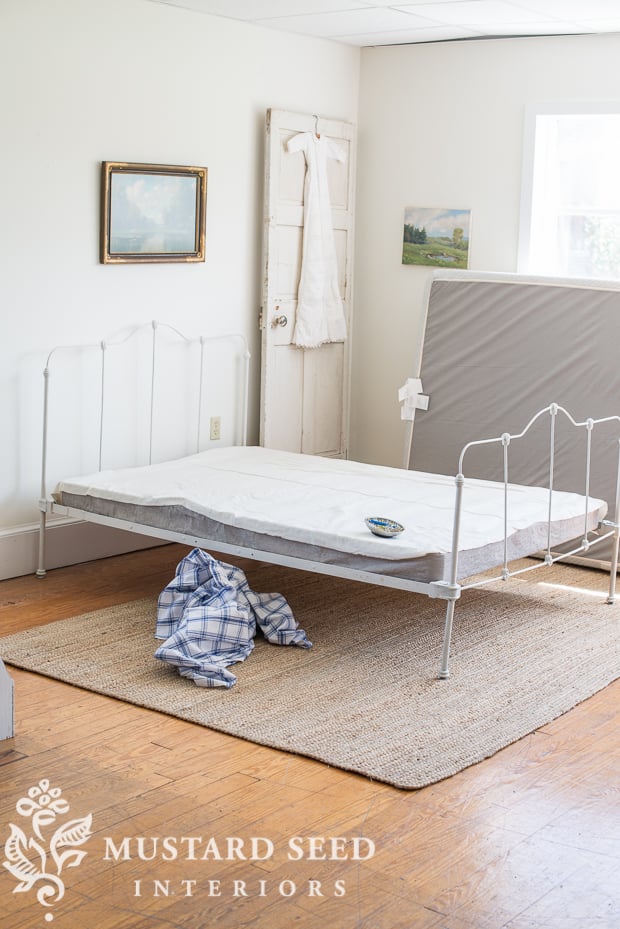 Cut it to size, about an inch larger than the boxspring on all sides, to give yourself a generous seam allowance. 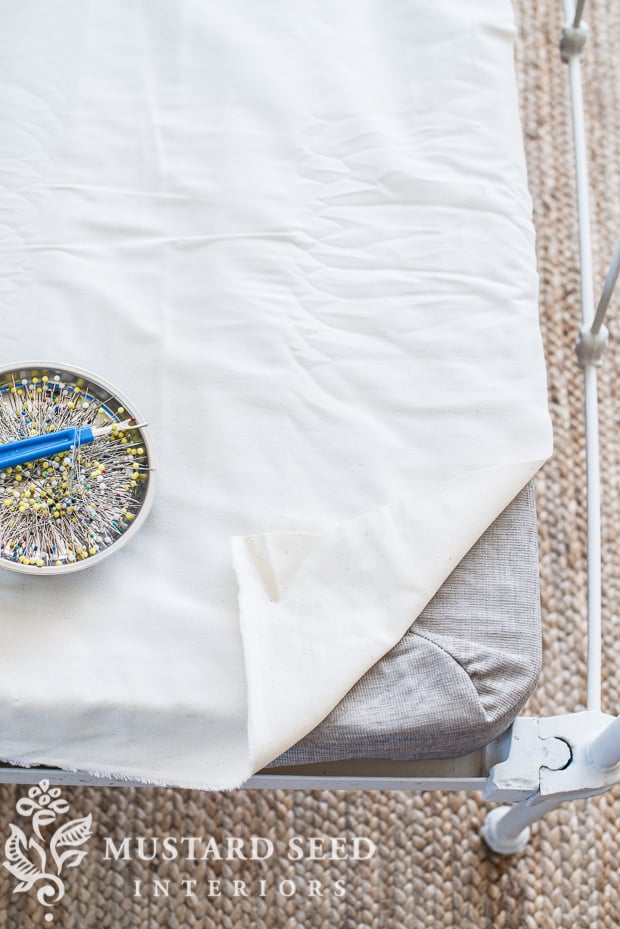 Now we’re onto the fabric.  If you’re a no-sewer, I would suggest using a fabric that already has a hem, like a fabric shower curtain, drop cloth, or tablecloth.  I happened to use a tablecloth, because I was looking for a blue & white “window pane” plaid fabric and this was all I could find.  I was also on a tight timeline, so I needed to order fabric with expedited shipping.  At $30/each, I didn’t chose tablecloths because they were a less expensive option, just an FYI.  THIS is the one I ordered.  Actually, I ordered two of them for a full-sized bed.

I cut each tablecloth in thirds, so I had six 20″ x 60″ pieces of fabric.  Because it was hemmed on four sides, I had four pieces with one 60″ hemmed edge and two pieces that needed to be hemmed.  Are you tracking with me?

So, I pressed and hemmed one long edge on those two pieces.  If you’re no-sewing this thing, you can use a small bead of fabric glue or fusible interfacing to hold the hem.

The trick to a nice hem is ironing.  Even if you’re a no-sewer, you need to be an iron-er.  It’s one of those steps that seems like a good idea to skip in order to save time, but it makes it harder in the long run and the finished product doesn’t look as sharp.  This is coming from a former non-iron-er.

Fold the edge you’re hemming over about 1/2″… 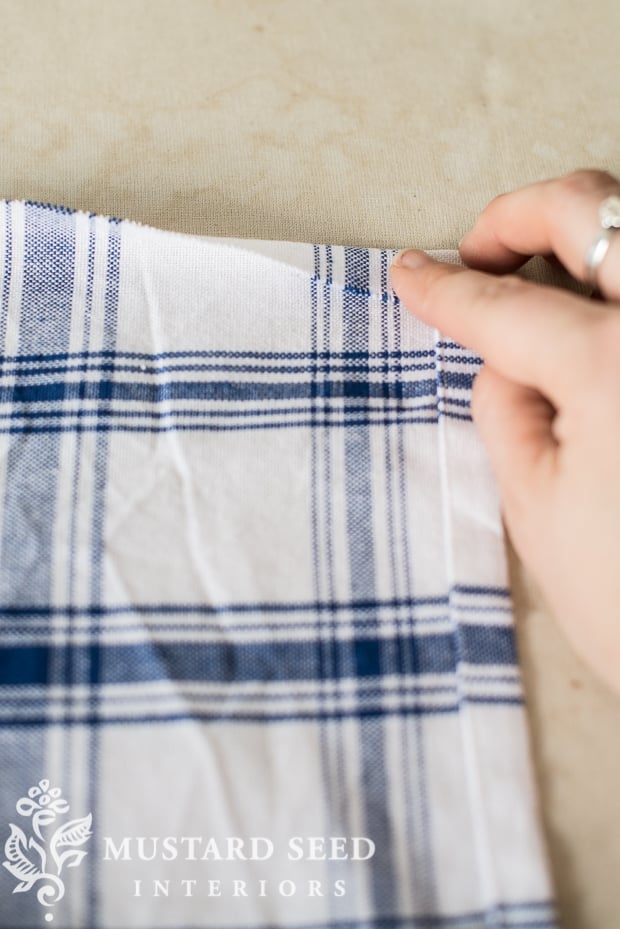 …and press it down with a hot iron. 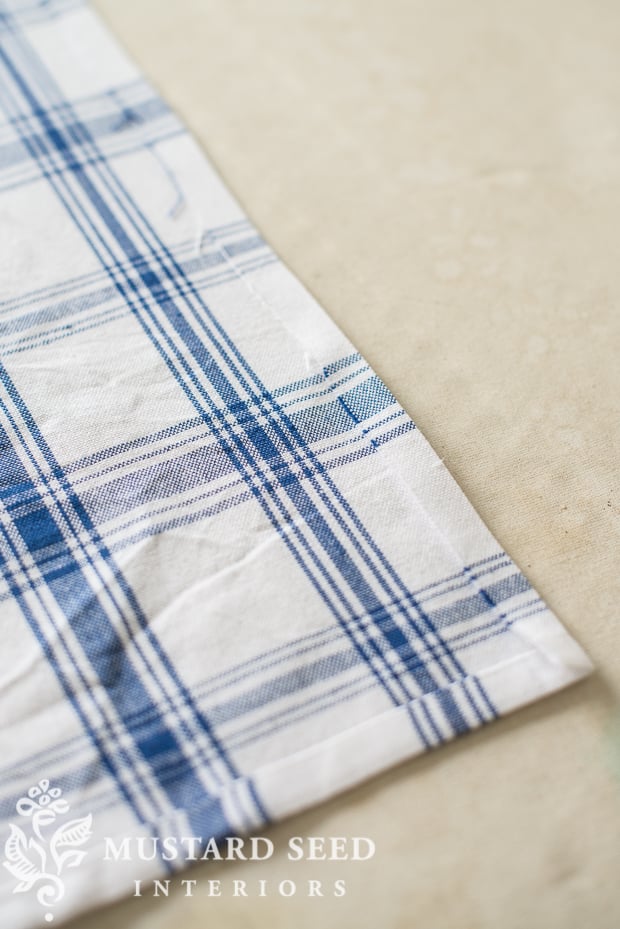 Fold it over one more time and iron that fold, so you have a nice crease.  Pin it in a few places to hold it until it is stitched.  If you’re using fusible webbing, insert it into that fold and iron until the adhesive is activated.  (I have found fusible webbings more time consuming than sewing if you’re using a decorator-weight fabric.  Just an FYI.)  You can also run a bead of fabric glue and pin it in a few places until it dries. 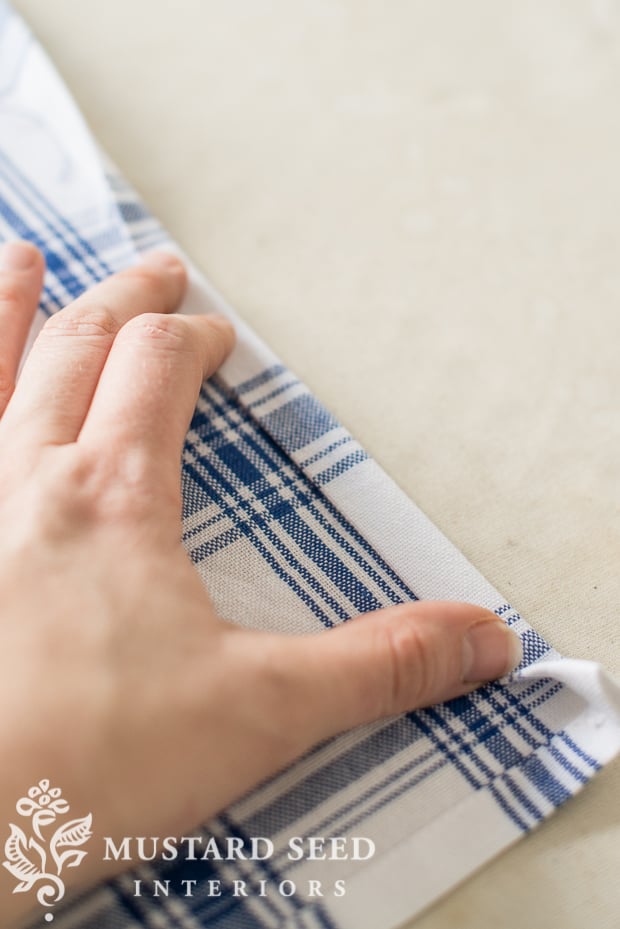 Once the bottom edge on all of the pieces were hemmed, I pieced two of the 20″ x 60″ pieces together, to make one 20″ x 120″ piece.  To do this, put right sides together and lined up the hems.  Pin pieces together along the edge you want to sew and sew them together. 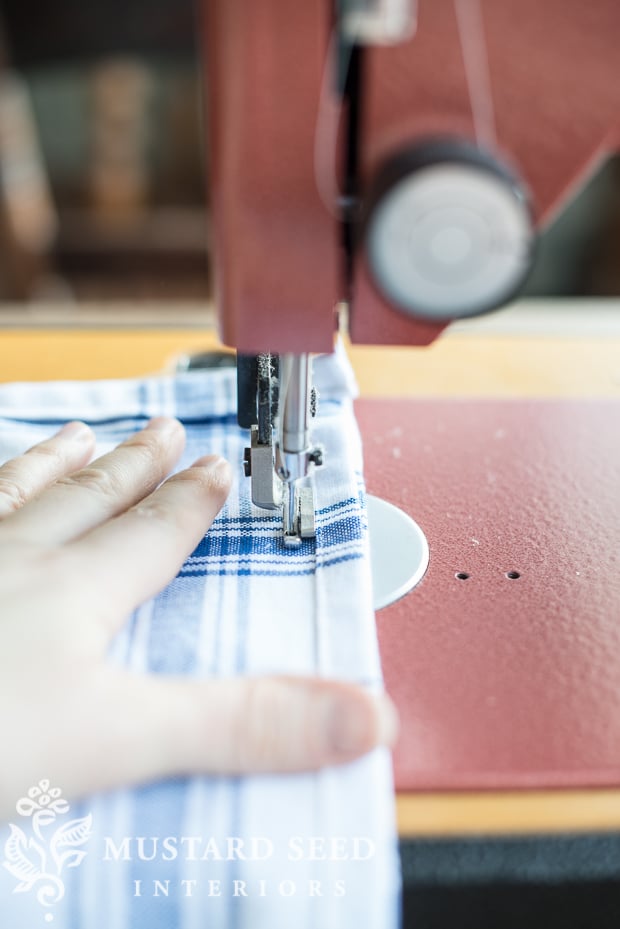 Since I was working with a tablecloth that was hemmed, I had to cut off the hemmed edges to reduce bulk at the seam. 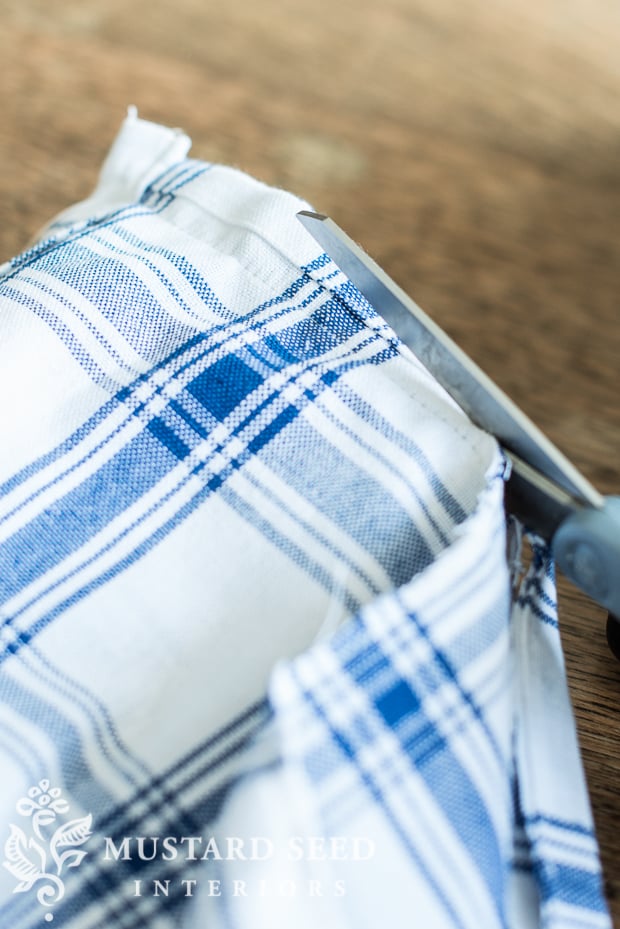 And I ironed the seam open, so it would lay flat. 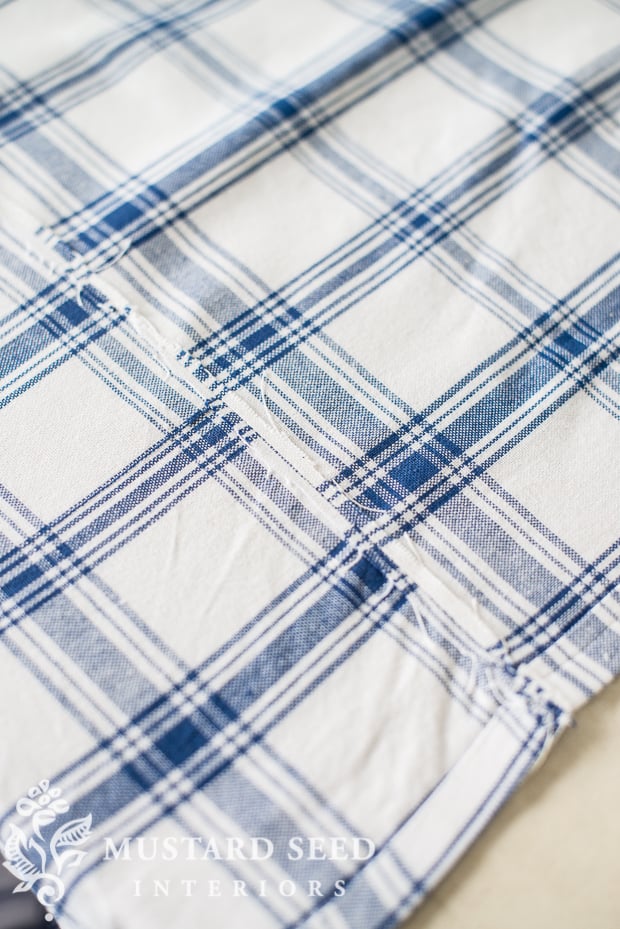 You’ll notice that the pattern is a little off where the seams meet.  Ideally, you want to match up the pattern, but I was working with a limited amount of fabric, so I just went with it.  It won’t be noticeable, because I’ll hide the seam in a ruffle.

For the no-sew option, don’t even worry about piecing them together.  Just overlap the two pieces when you ruffle.

Repeat this with the other four pieces.  I pieced three sets of two together, since I needed an “opening” in the skirt for the bed frame leg.

I pinned the skirt into place like I do slipcovers, inside out.  So, in the photo below, the right side of the fabric is facing in towards the bed frame.  I pinned each end, then the center, then the center of each side between the end of the bed and the center of it.  This ensures that the fabric is distributed evenly throughout the ruffle.  (The raw edges of the decking and the skirt should face the same direction when pinning, so none of them will be visible when sewn and turned right-side-out.) 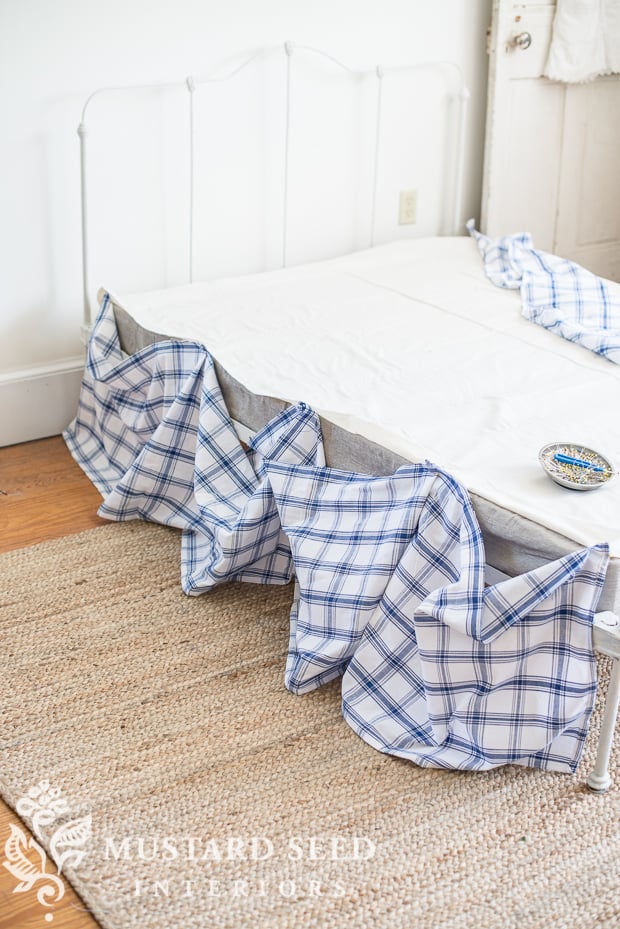 For a no-sew option, I would use a hot glue gun and glue it to the fabric “decking” (piece that fits over the box spring) and would work right-side-out.  You can also just pin the fabric in place, pinning the fabric a couple of inches towards the center of the bed, so the pins will be covered by the mattress. 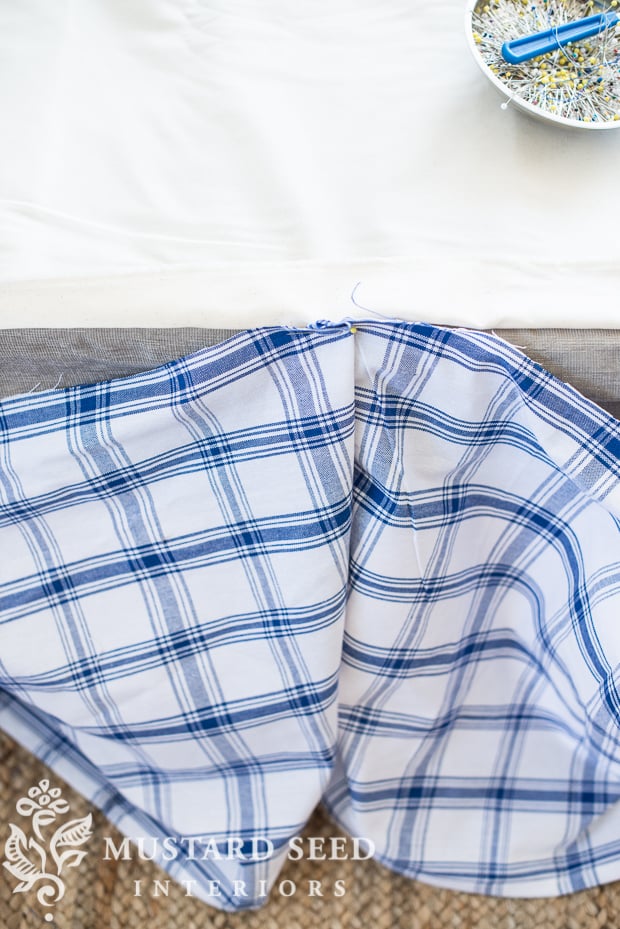 I then ruffled and pinned the rest of the skirt.  You could make these by measuring, which I did with my mom’s bedskirt, but I really like pinning on the actual boxspring, so I know it will fit properly.  I can’t tell you how many times my fabric has “shrunk” when I work off of measurements!  (Really I just mis-measure or get a little too generous with my seam allowances.) 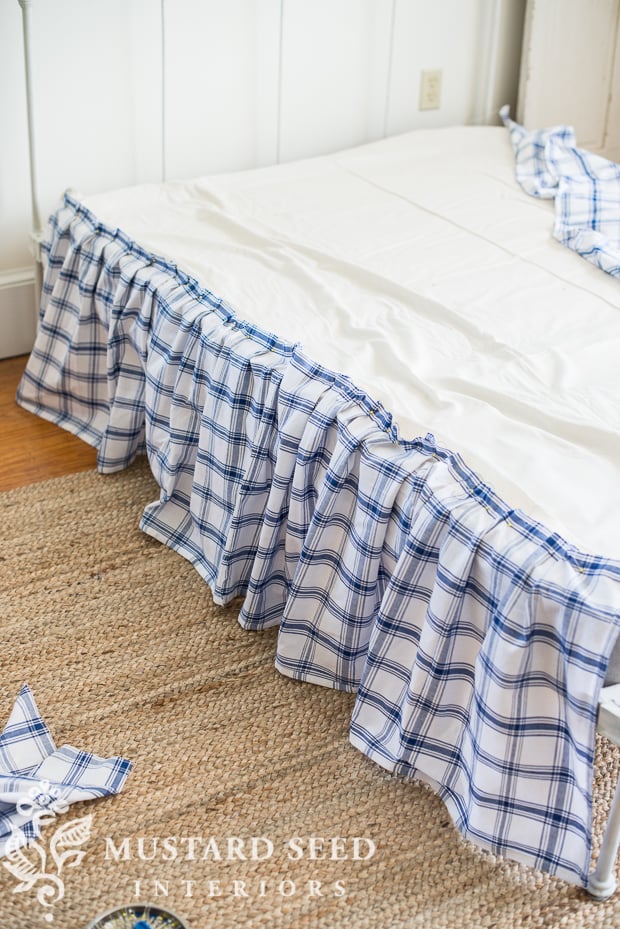 I repeated this on the other two sides (although I used a little less fabric for the end of the bed, since it’s a full and didn’t require as much fabric.) 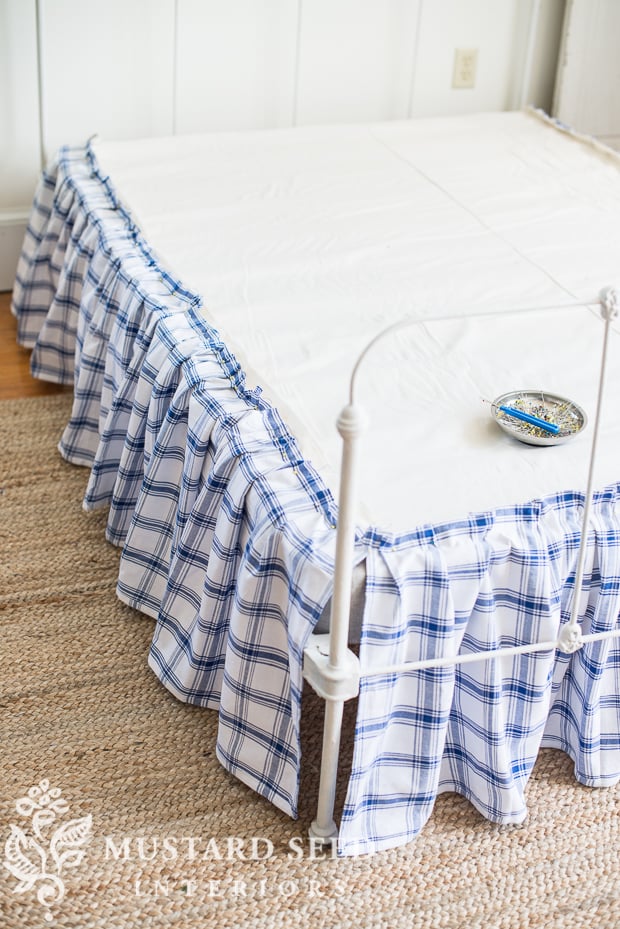 I stitched along the pins, trimmed the excess thread and put it back on the bed with the right-side showing.

I used this same technique to make my parent’s bed skirt, but I made it in one, long continuous piece of fabric, since they don’t have a footboard. 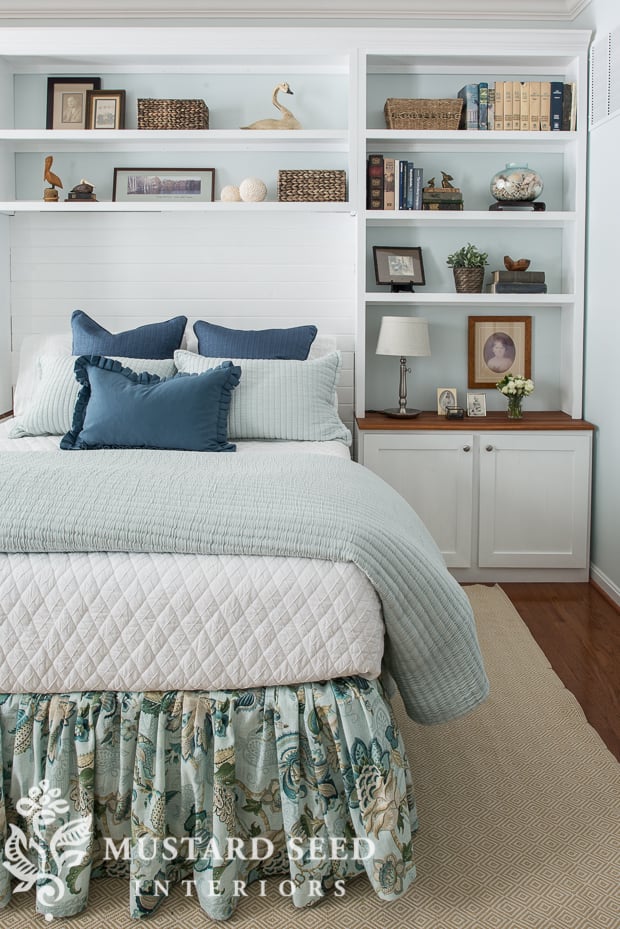 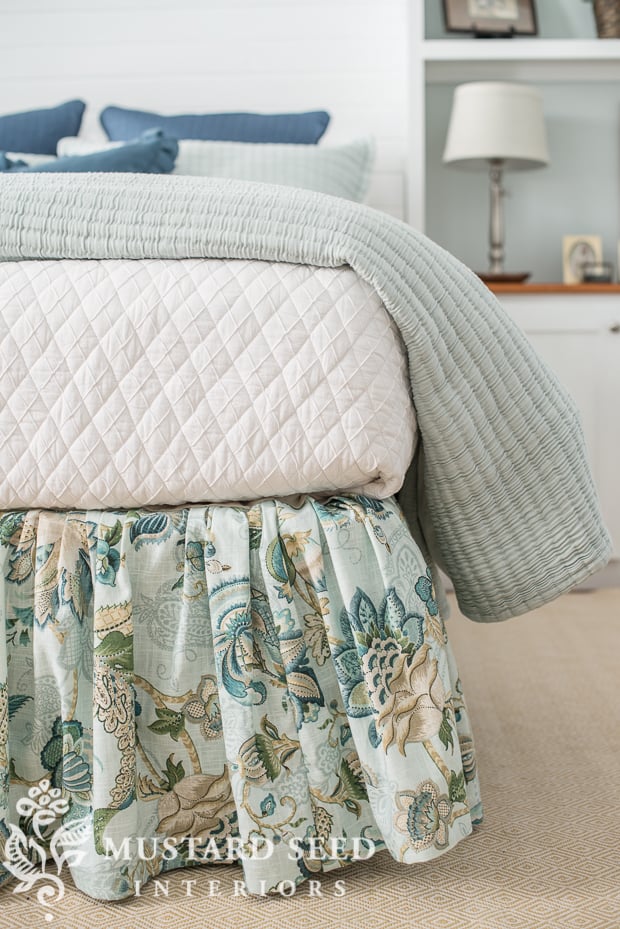 And that’s it!  I think bed skirts are very forgiving, so if you’re new to sewing, it’s a great project to start with!

Today, I went on a last-minute shopping trip for Lucketts and I found some amazing pieces!  I’ll film another
“haul” video tomorrow…