I was going to think about THIS TABLE a bit more before I painted it, but I really could only imagine it one way, so I decided to go with that.  Also, I had a new friend and local blog reader, Kellie, coming over to hang out and help me paint while our boys played together.  It seemed like the perfect time for whitewashing this tabletop.

And, even better, she had never tried MMS Milk Paint before, so I was able to teach her all about it as we worked on my kitchen table. 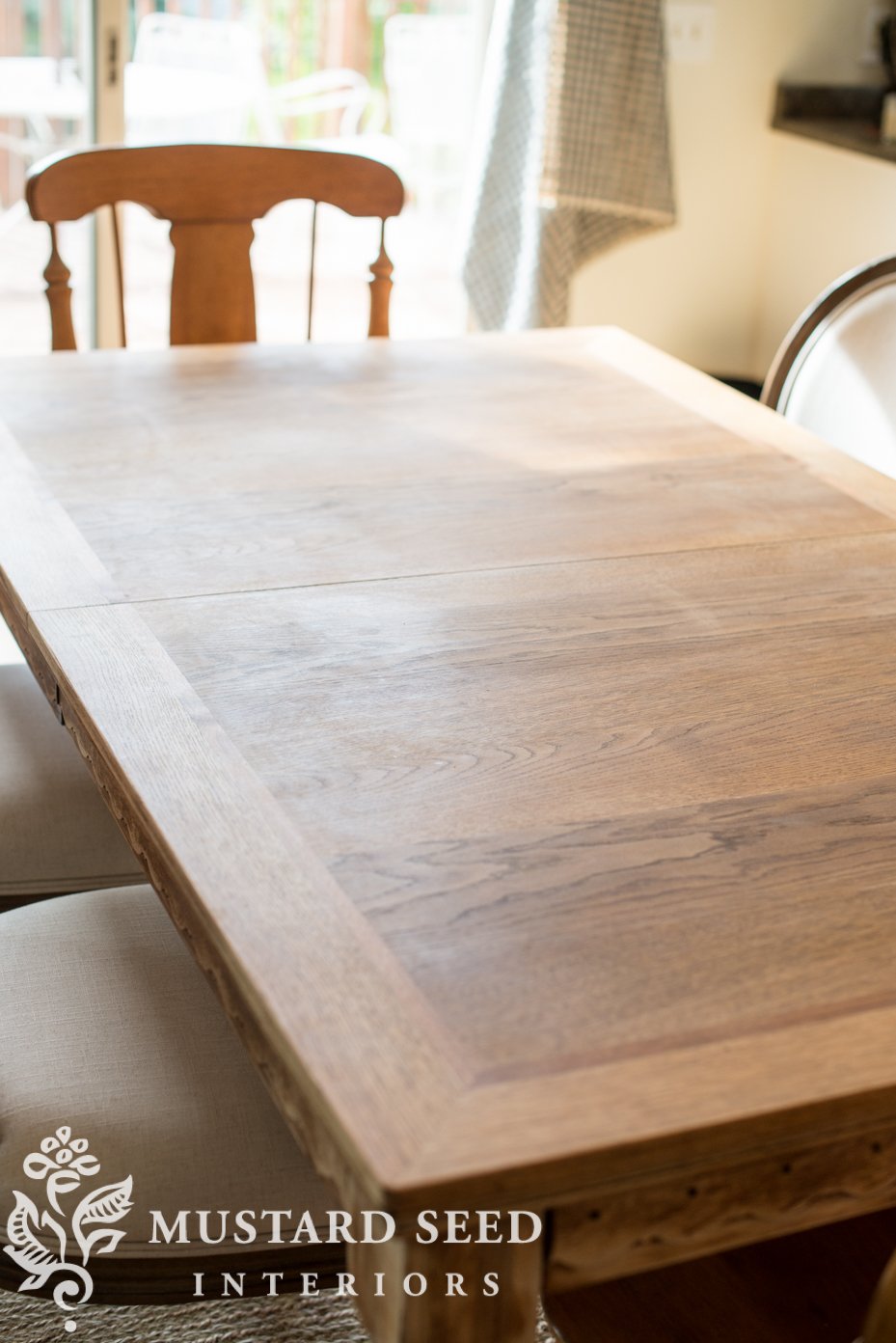 When I stripped and sanded the top, I learned that the top wasn’t solid wood, as I thought.  It’s a very thin veneer that is chipped, patched, and worn away in some places.  I don’t mind imperfections, but I felt like whitewashing this tabletop would camouflage these as well as any future scratches and dings that happen over time. 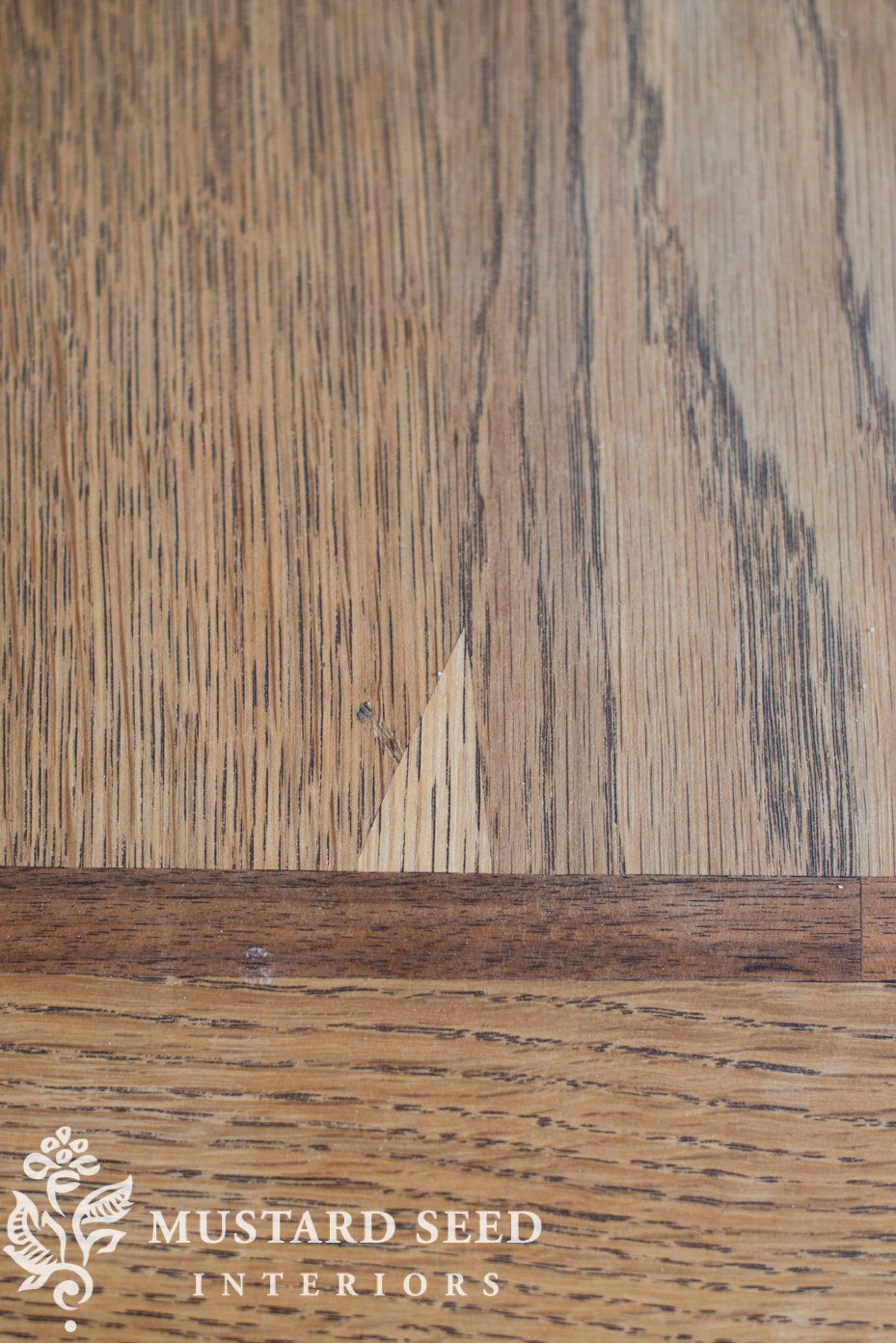 I mixed MMS Milk Paint in Linen, so it was very thin – about three parts water to one part powdered paint for whitewashing the tabletop.

I then brushed it over the wood (which was stripped and sanded a couple of months ago), really working it into the grain and spreading it thin.  I brushed it out so much that the paint was almost dry to the touch right after application. 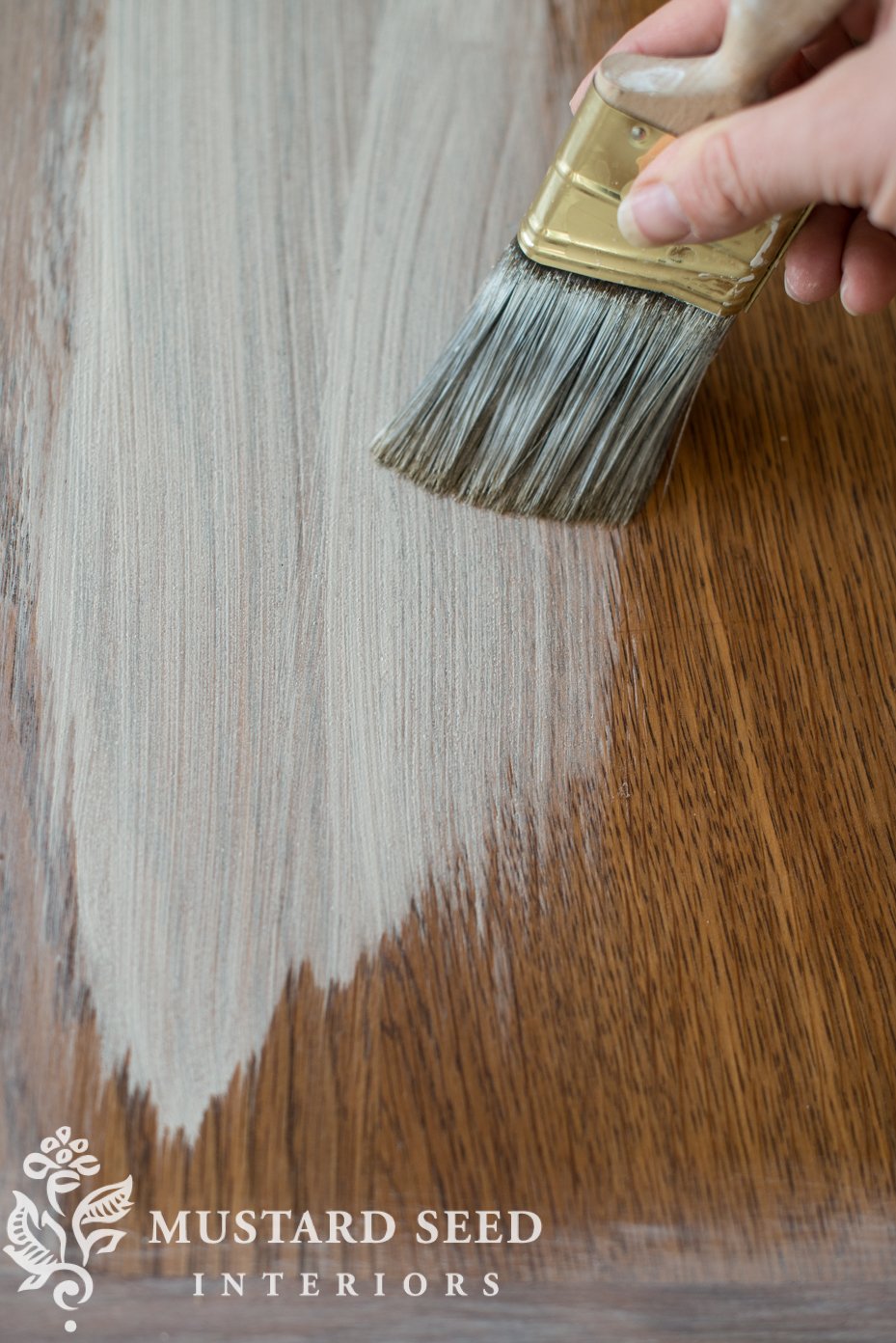 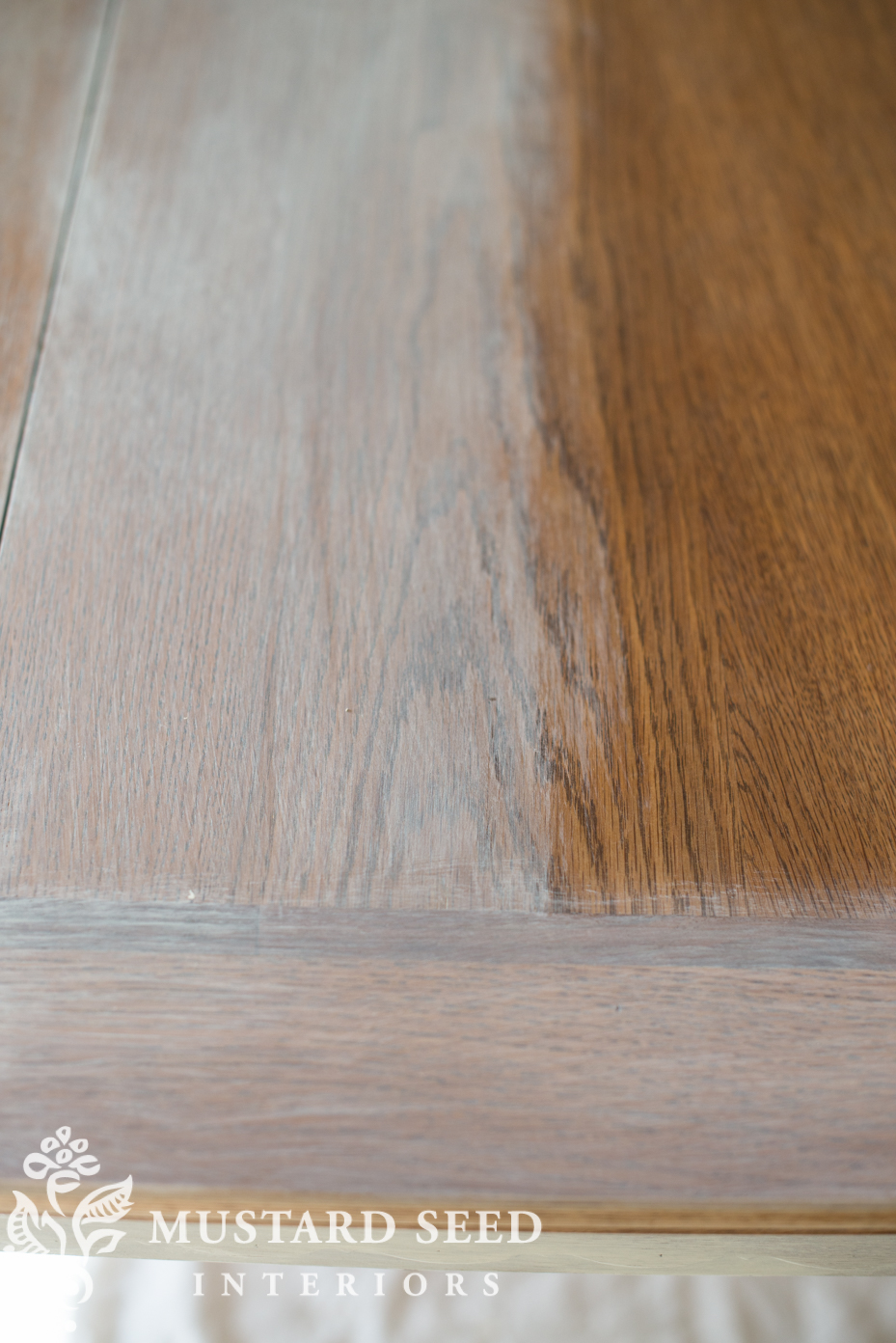 Once it had a little time to dry, I sanded some of the washed paint layer back with 220 grit sandpaper, always working in the direction of the grain. 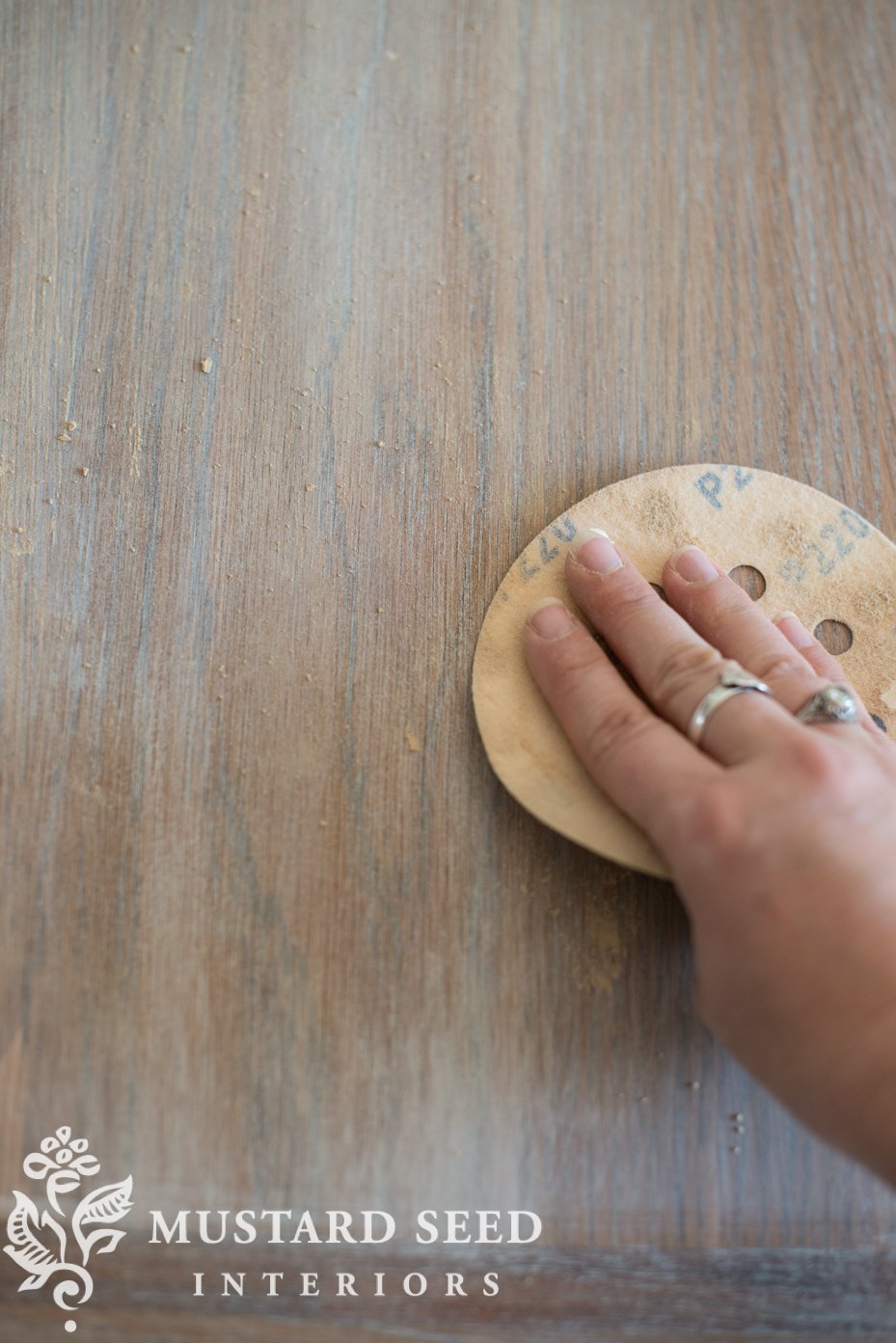 …and vacuumed up all the dust to see how it looked. 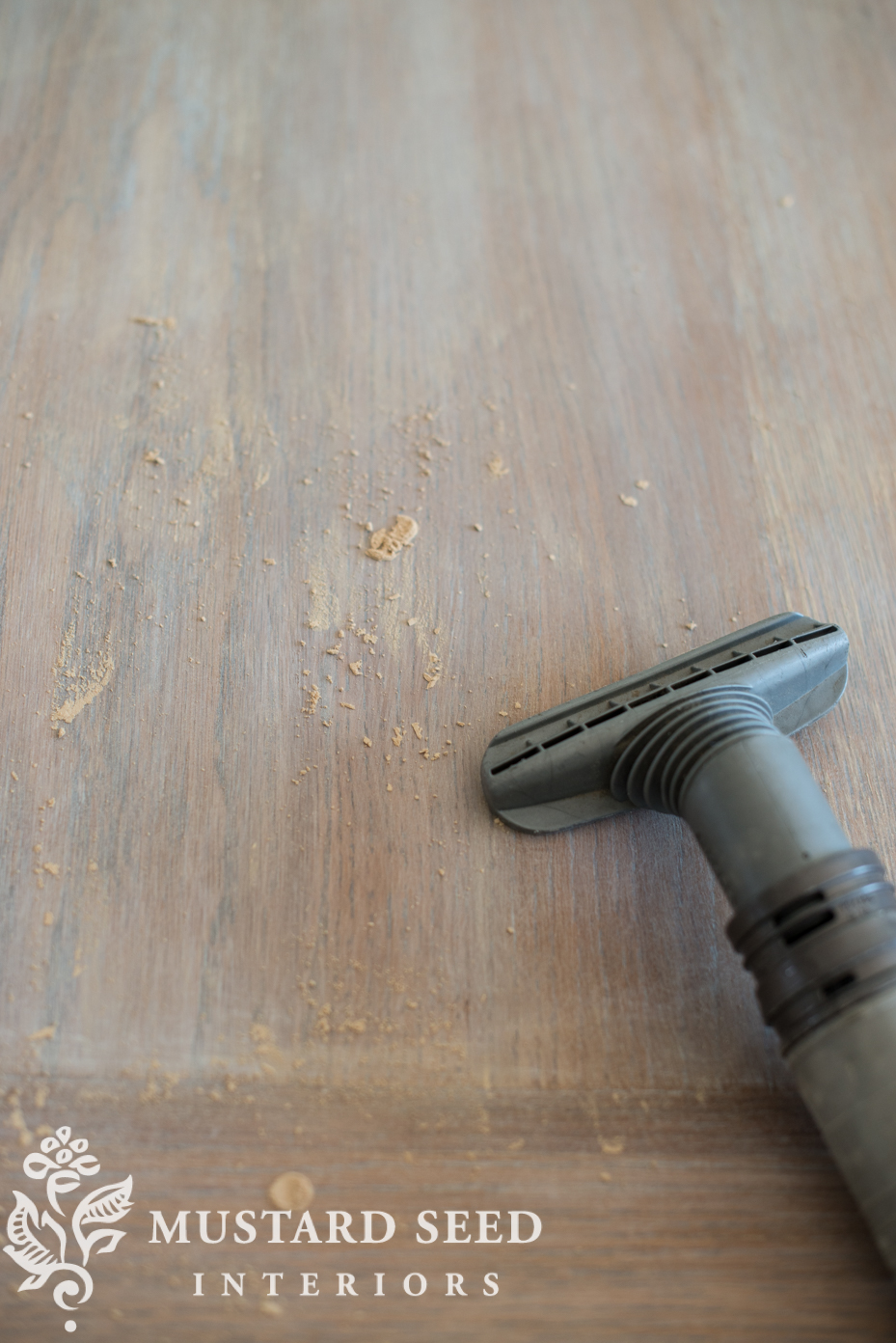 While I worked on the top, Kellie, painted the base in Linen, but a thicker mixture of it, so it was opaque.

Now that I’m thinking about it, that might have been a little nerve-wracking!  Painting my table with my brand of paint, which she’s never used before while I’m whitewashing the tabletop.  I assured her she couldn’t do anything that would mess it up! 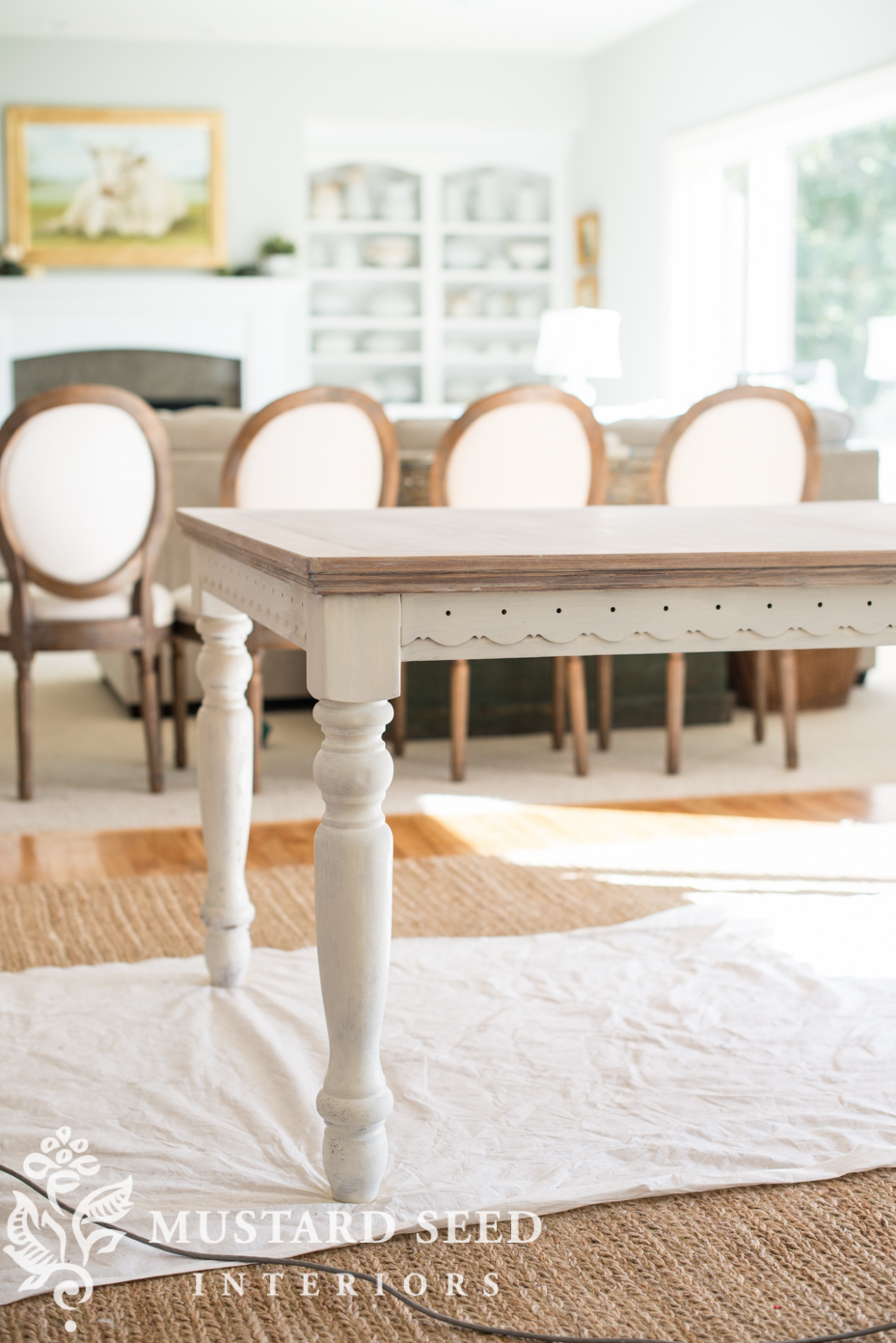 And she didn’t.  She did a great job.  The milk paint chipped a bit too much in some places, so I sanded them back a little and reapplied milk paint in choice spots.  I wanted to retain some of the chipping, so I didn’t go as far as sealing it. 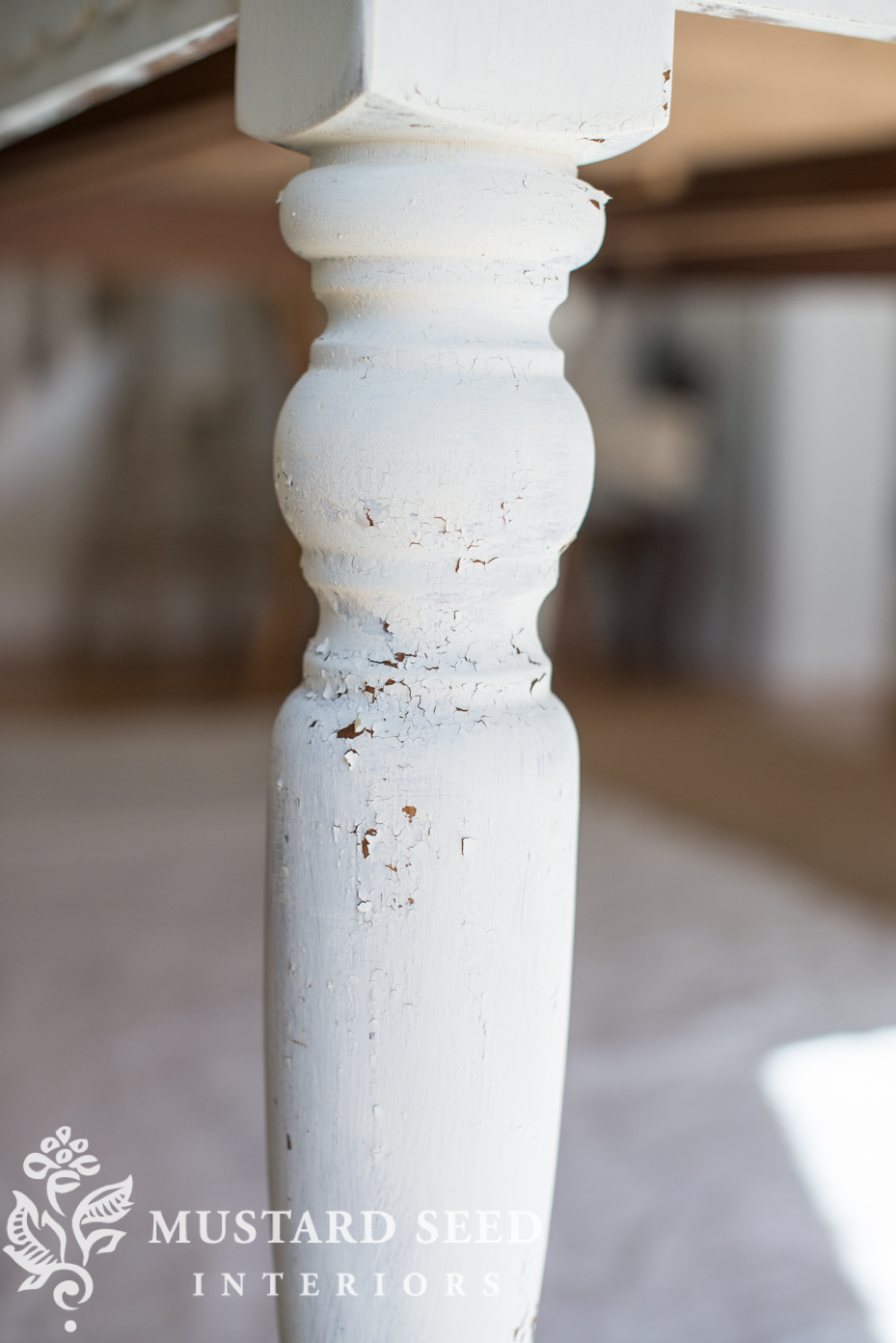 Once I had it where I liked it, I sealed the base with Tough Coat.  That’s the best finish for sealing chippy pieces. 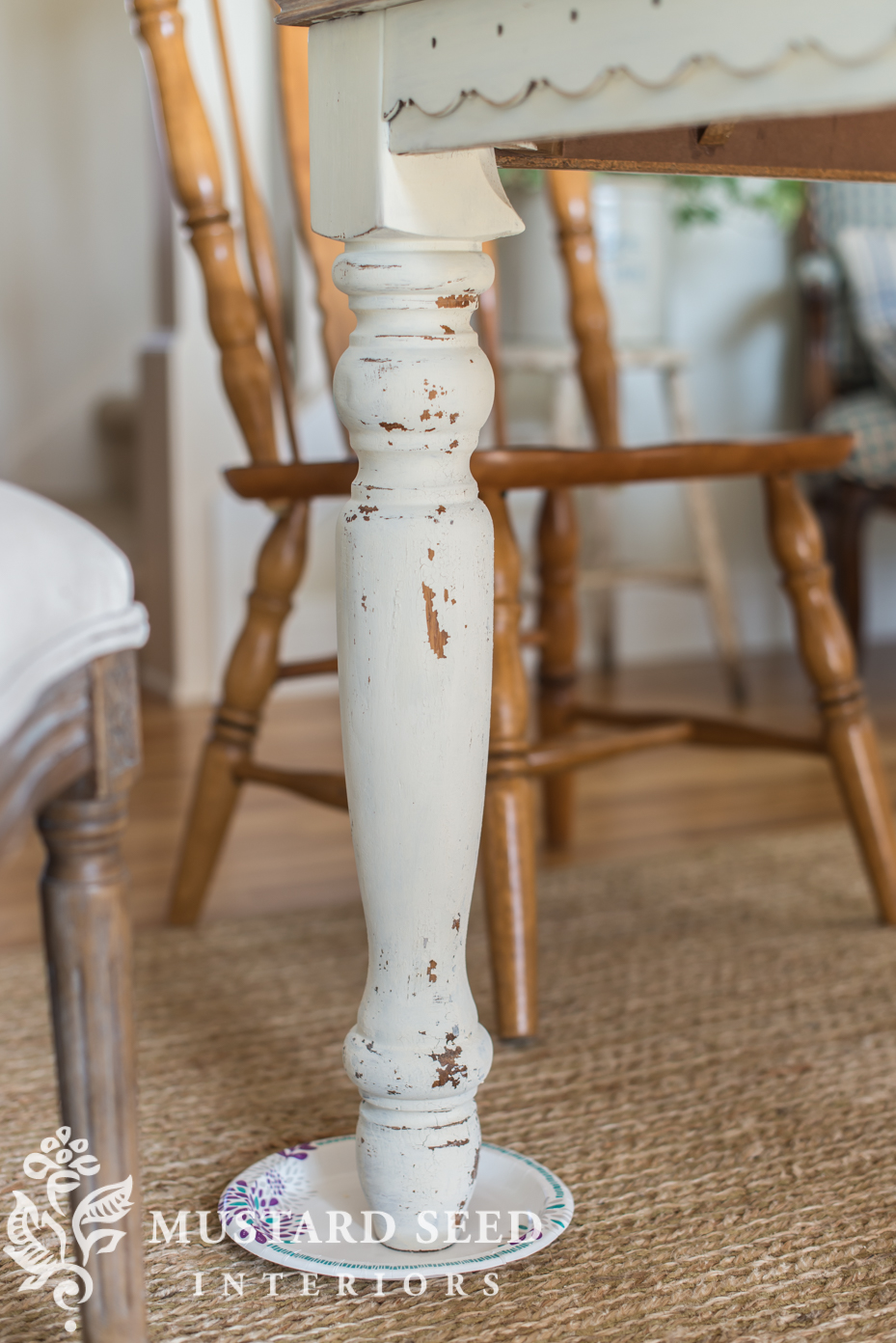 I also sealed the apron… 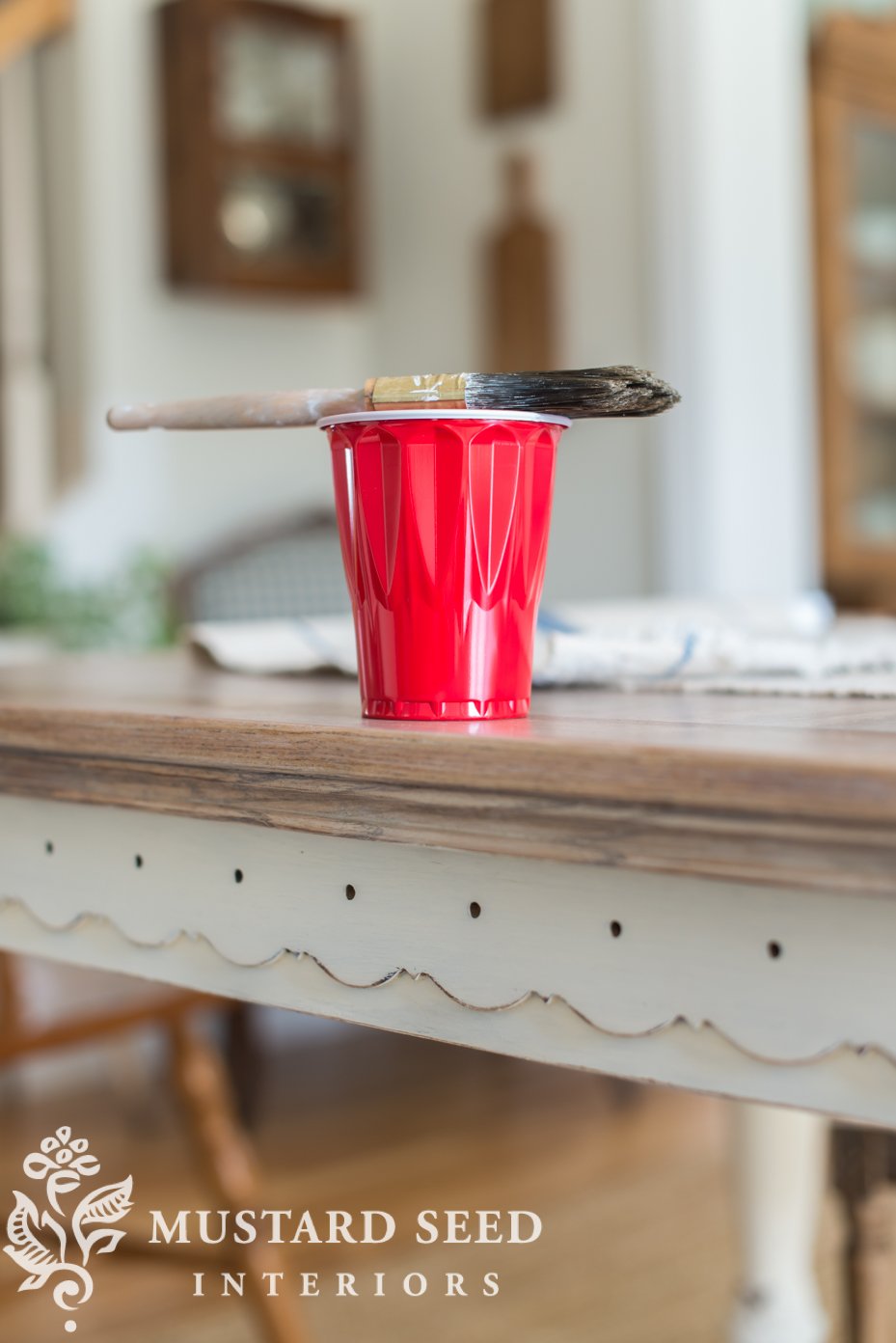 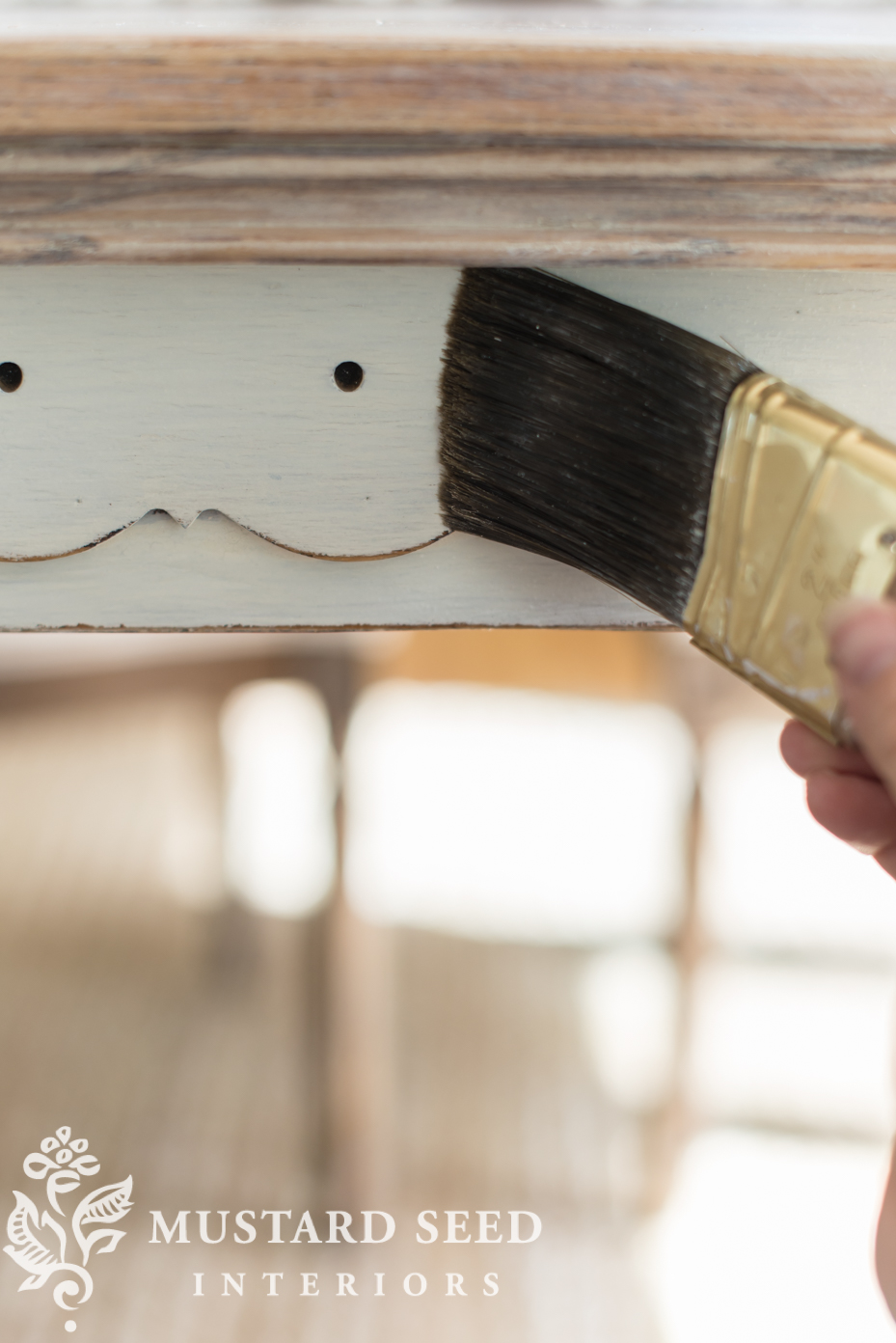 …and the top.  The tabletop received two coats for added durability.  The whitewashing, sanding, and fiishing brought out the wood, contrasting it with the wash that settled in the grain. 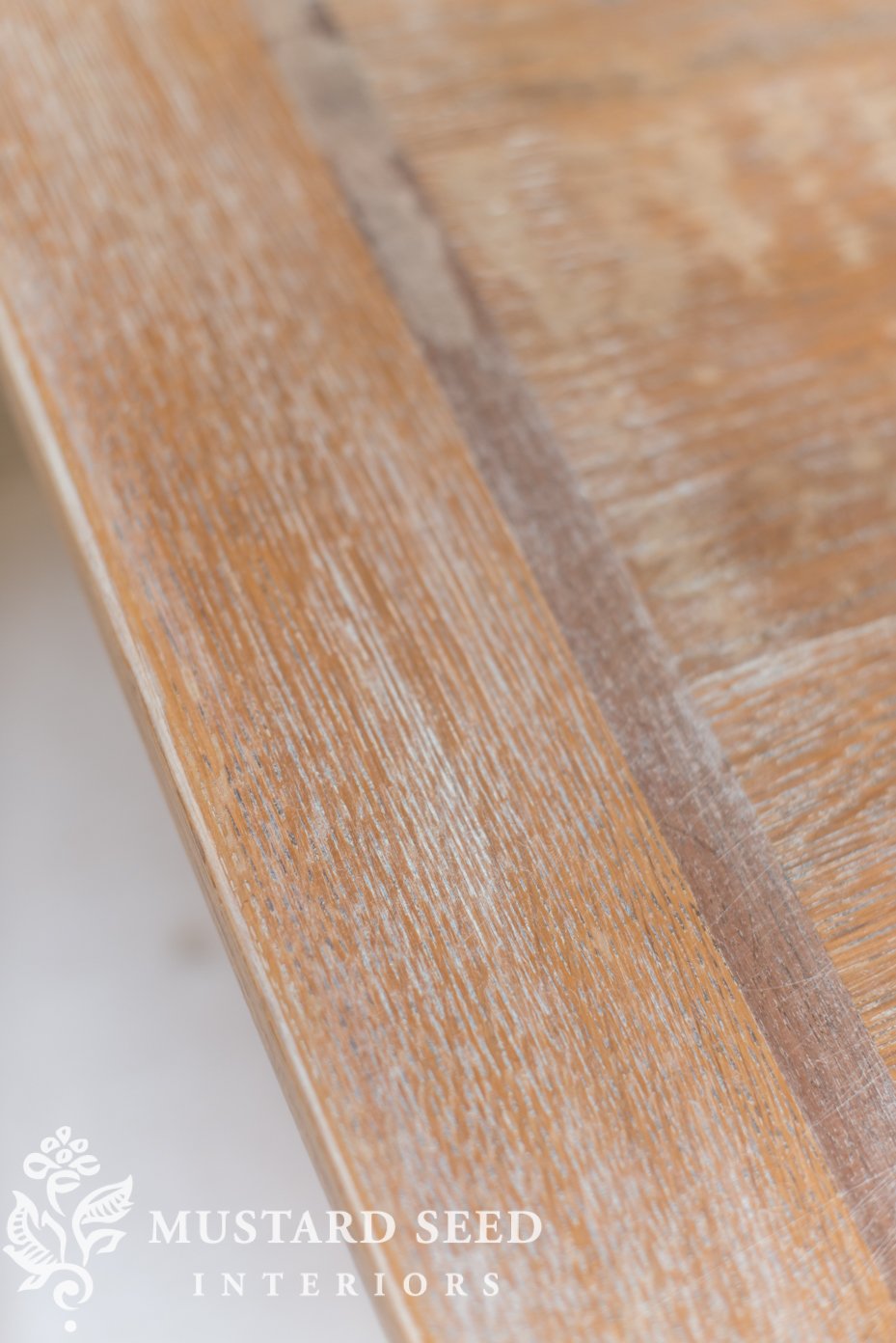 But, the craziest thing happened when whitewashing this tabletop!  Half of it had this light-colored stripe where the runner originally was, but it was invisible until the finished was applied. 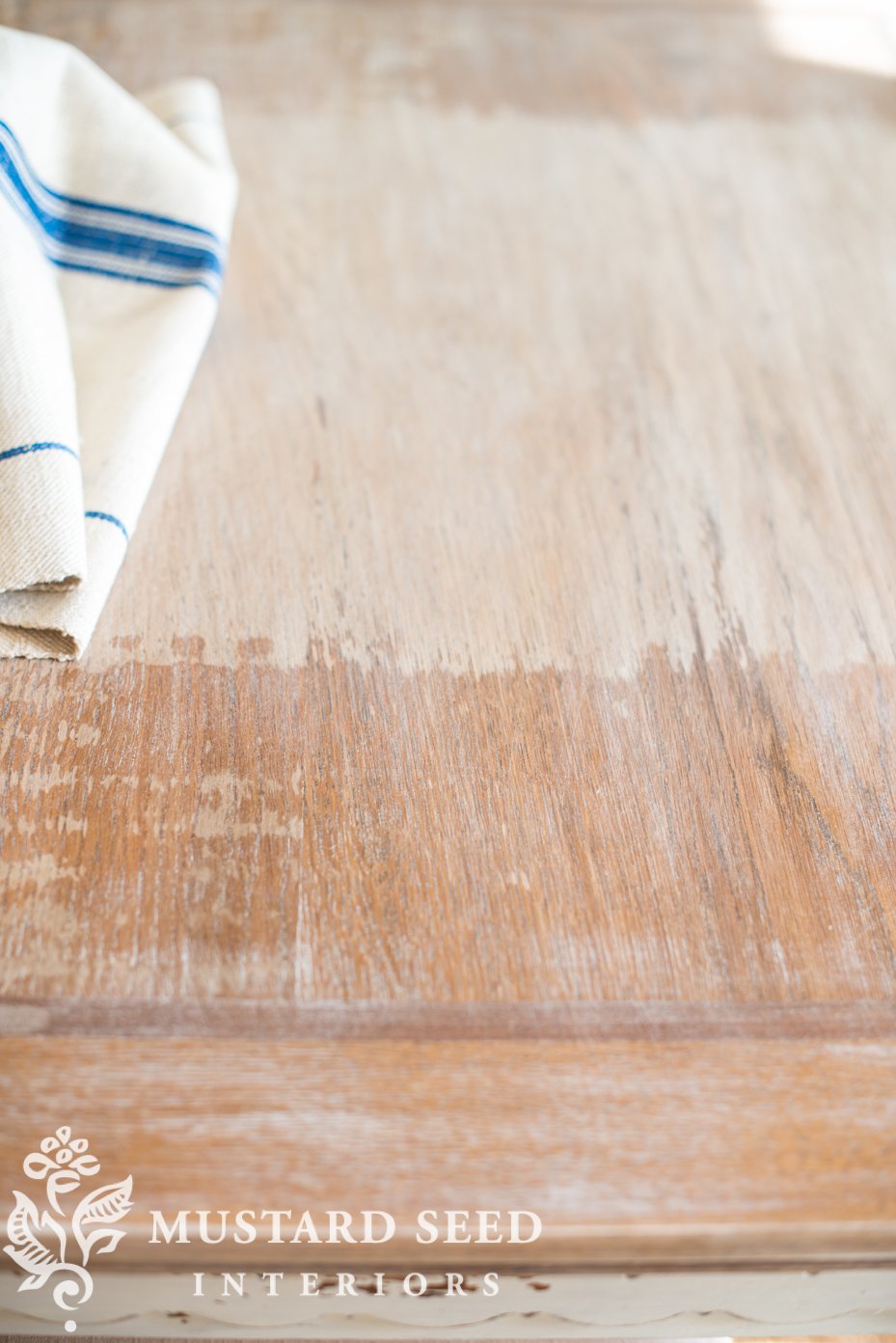 Furniture refinishing is just like that sometimes.  The other half of the table is fine!  It’s just that half.  So, something obviously played a role that I wasn’t expecting when I started whitewashing this tabletop.  I will most likely strip it down yet again, and whitewash it again.

For now, it looks like a pretty darn good place to put a runner to me! 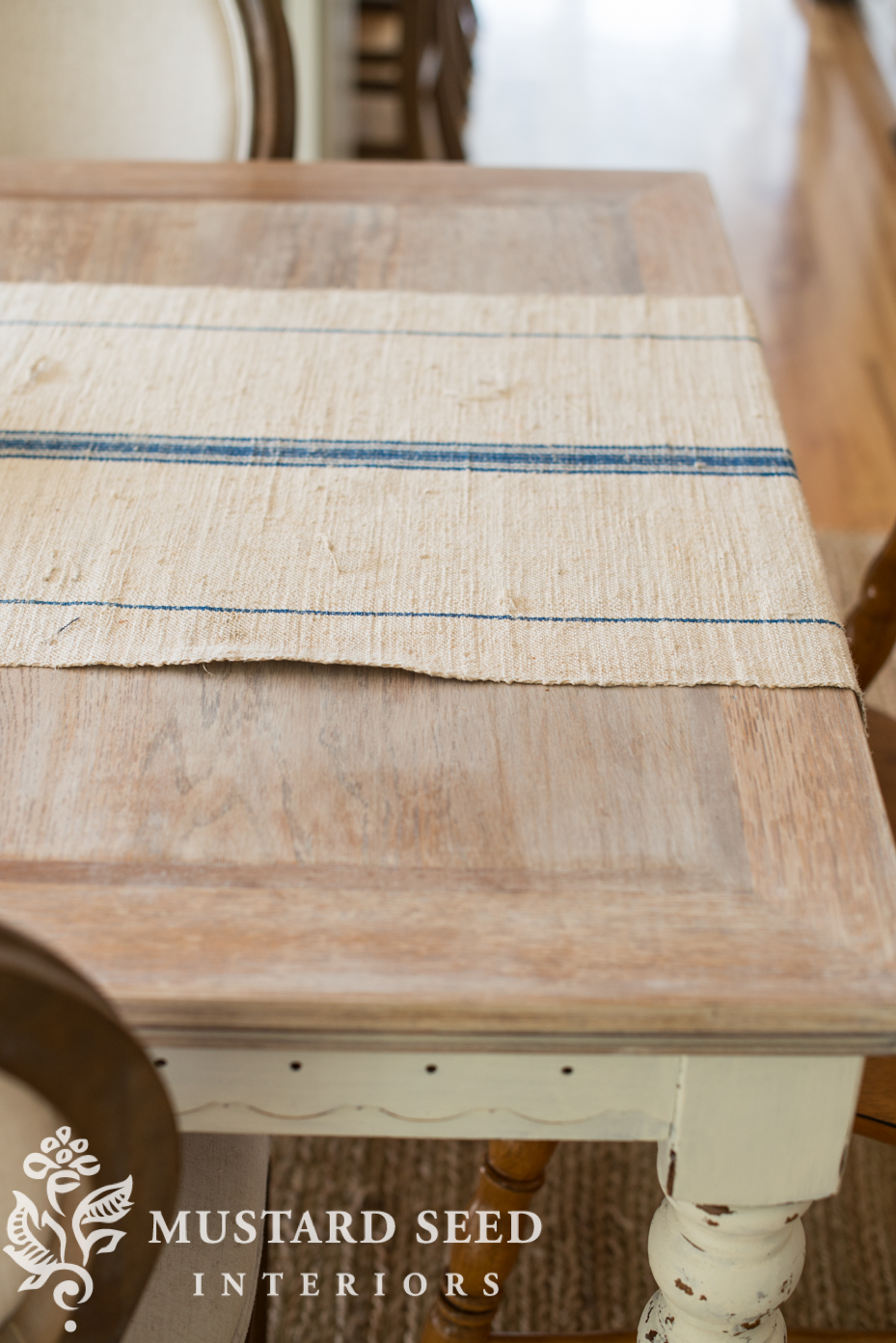 Aside from the crazy stripe, I love how the finish turned out.  It compliments the Birch Lane chairs perfectly. 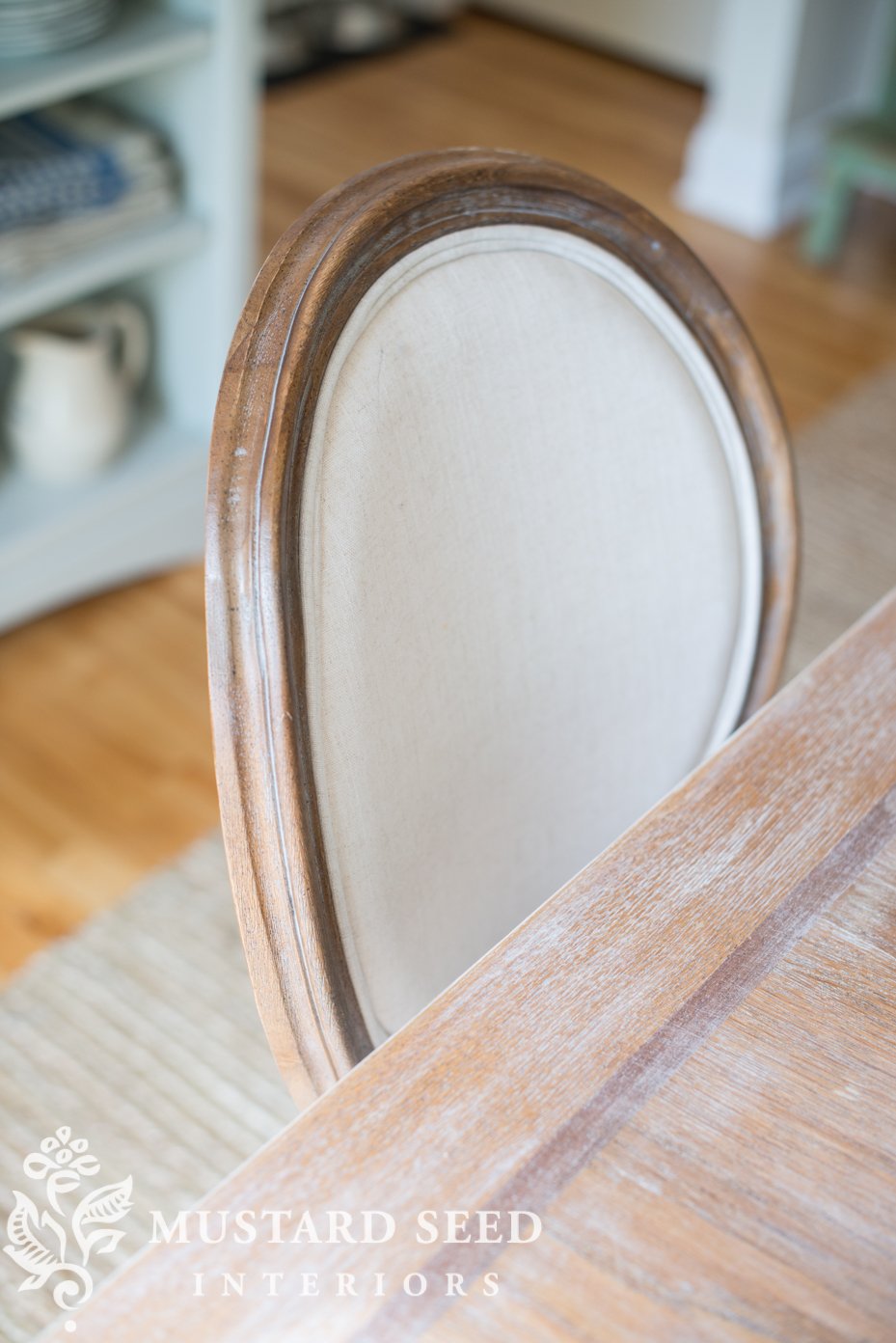 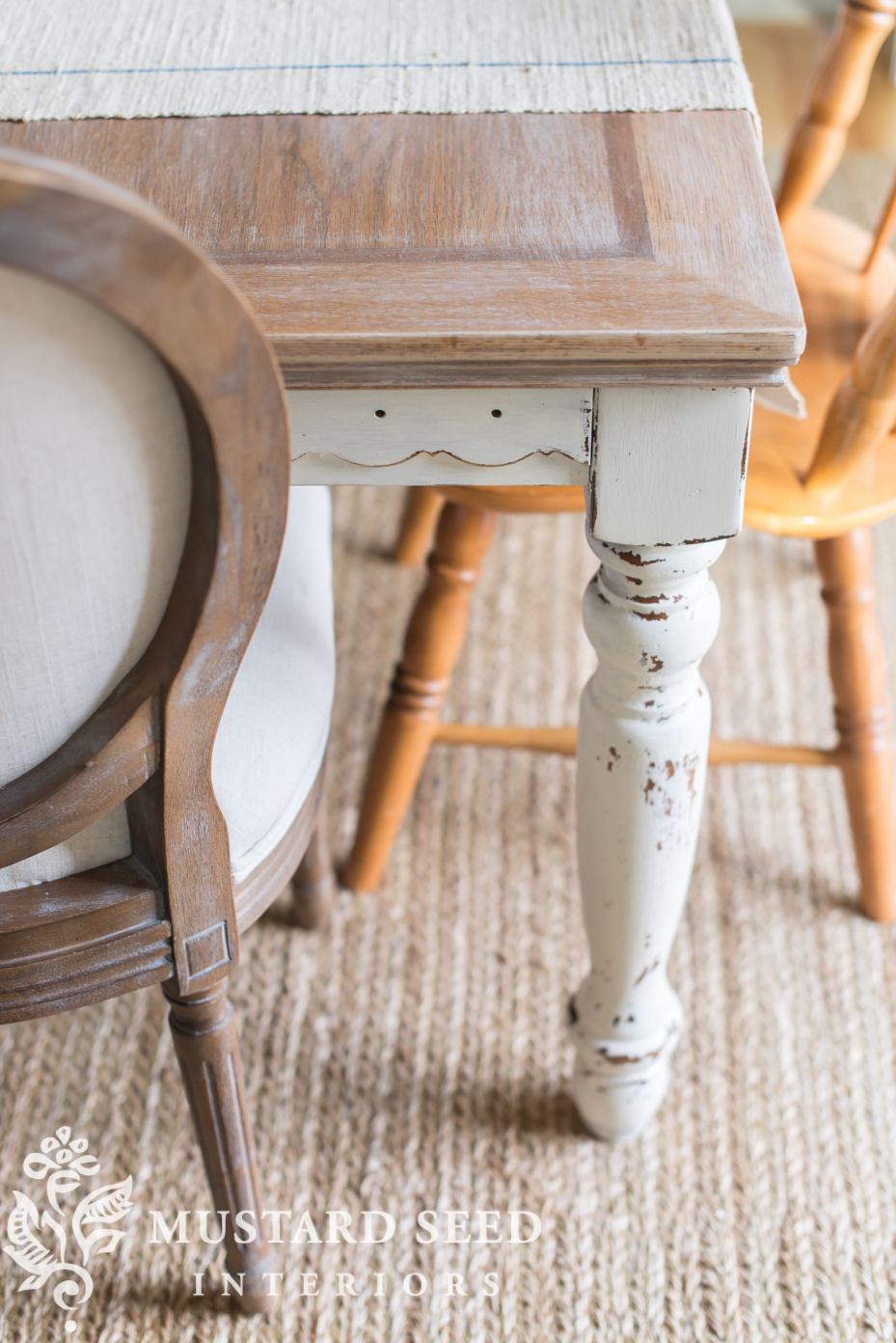 And yes, something will be done about those end chairs! 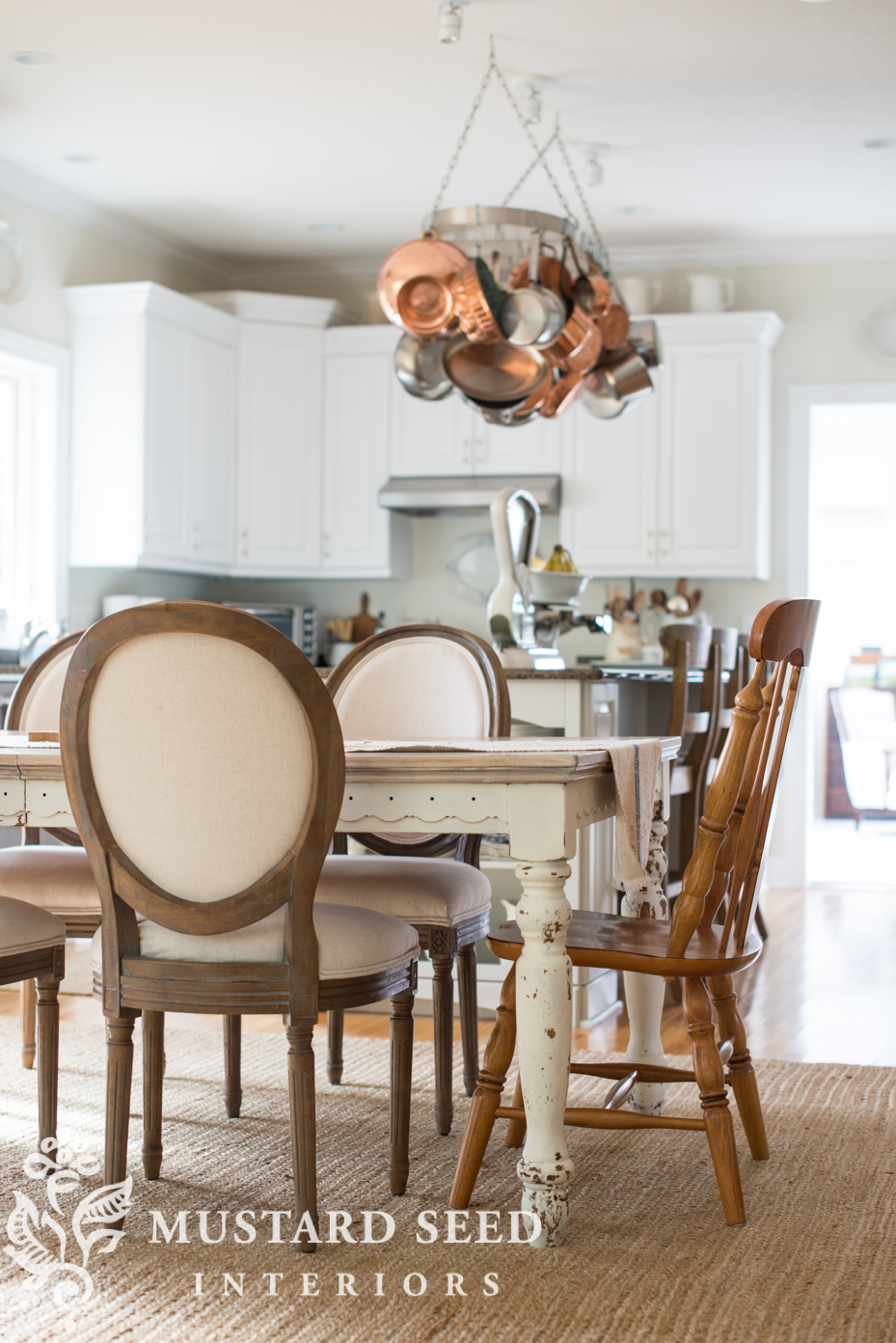