While staying in Barga, Italy, this was our temporary home… 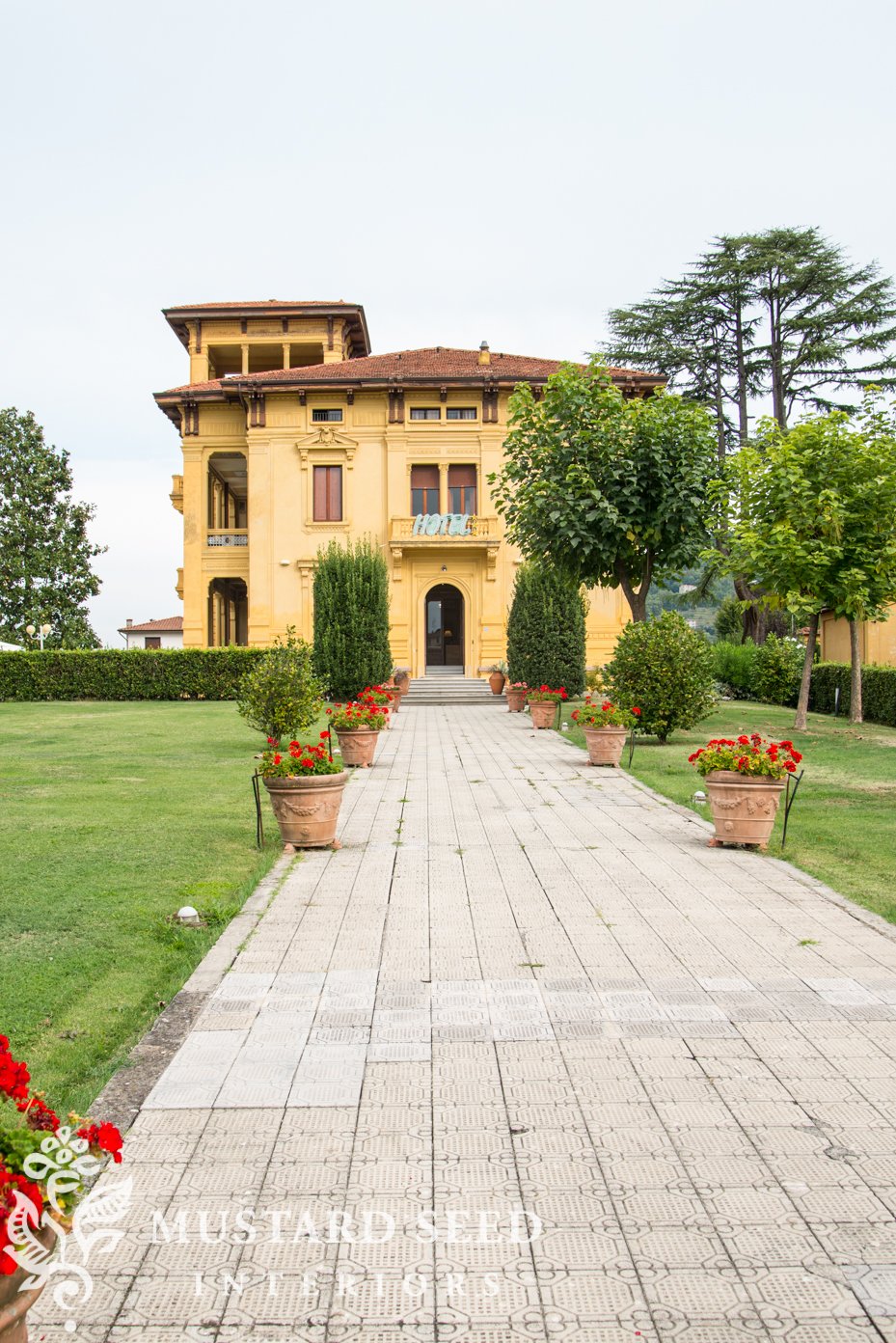 It is Villa Moorings, a family owned and operated hotel that has more of a bed & breakfast vibe.  Because it’s family-owned, it feels personal.  I would pop my head in the kitchen and ask for ice for my water bottle or plates and flatware when my mom and I had a dinner of fresh food collected from the local shops on the balcony one night.  They also adjusted breakfast times for our group when we needed to leave early for our trip to Lucca or to the airport.

And the breakfast spreads were a literal feast.  Parts of the table looked more like a snapshot from a dessert potluck with pies, cakes, cookies, and sweet rolls, but they also served meats, cheeses, made-to-order eggs, cereal, yogurts, fresh fruit, fresh-squeezed juice, etc.  You could be as good or a naughty as self-control would allow. 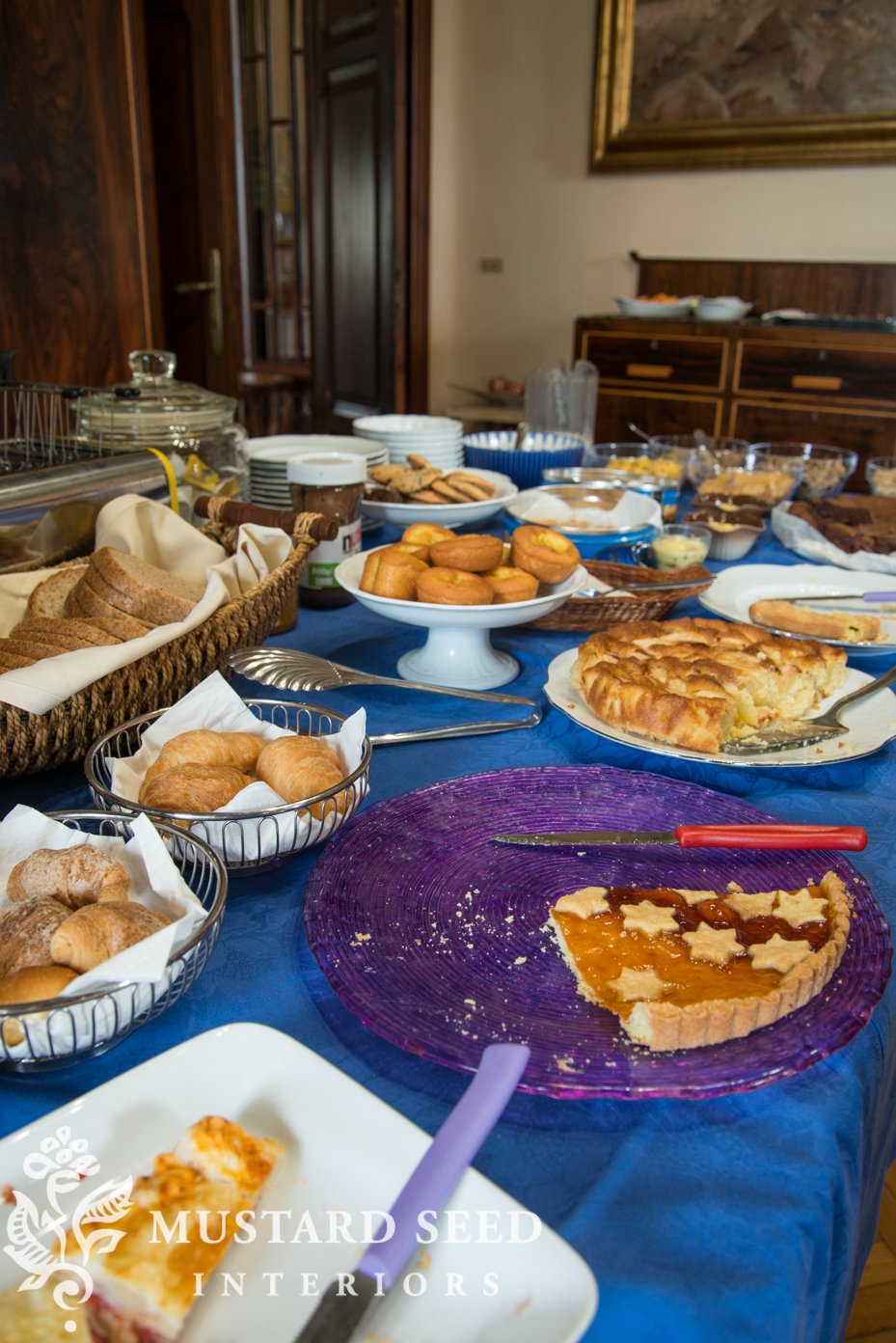 While the delightful mother-daughter duo and their staff make the place inviting and comfortable, it’s the building, the grounds, the views, and the location that make Villa Moorings stand head and shoulders above the average hotel. 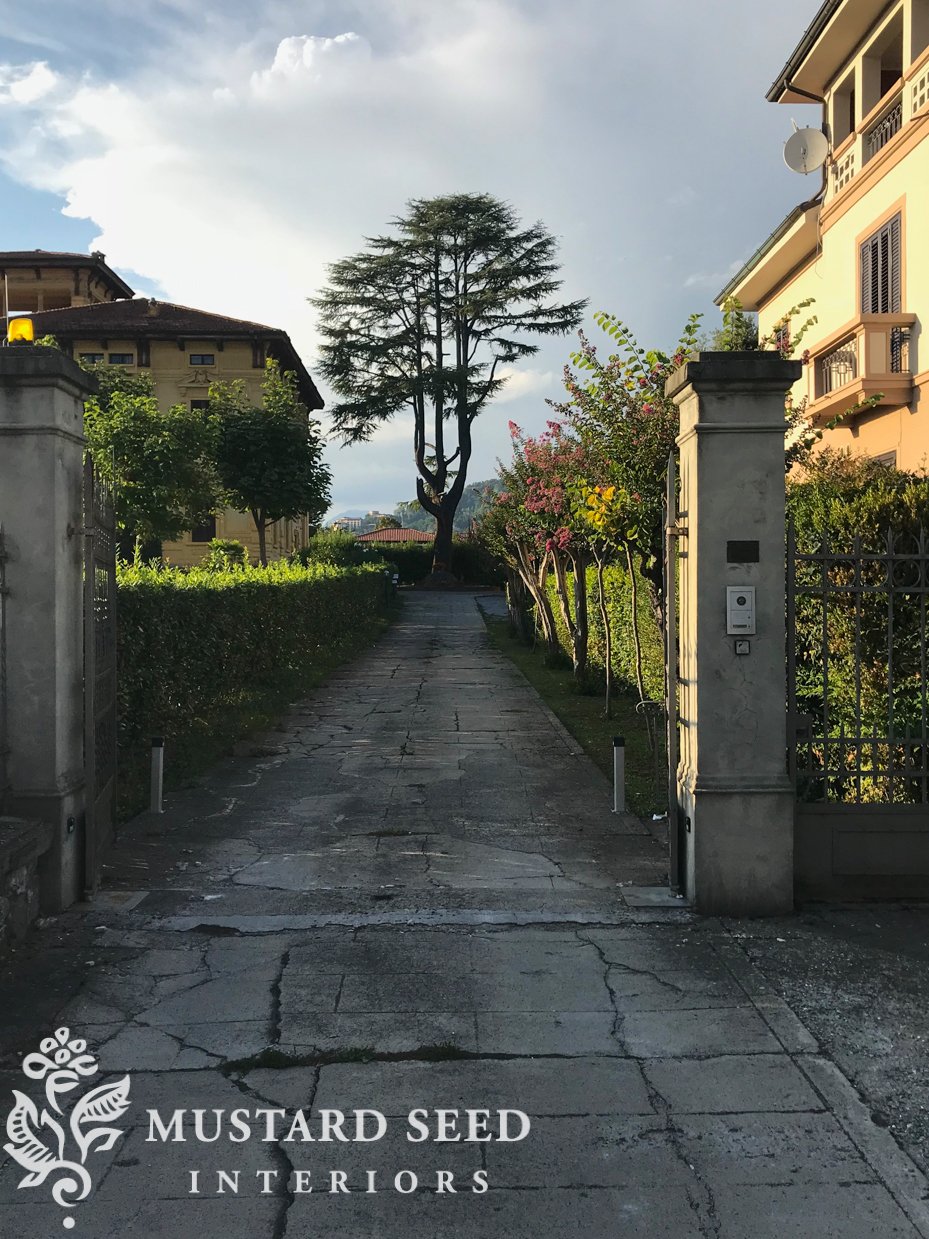 They even have a pool, which was a refreshing spot to sit and soak my feet during a September that was warmer than usual. 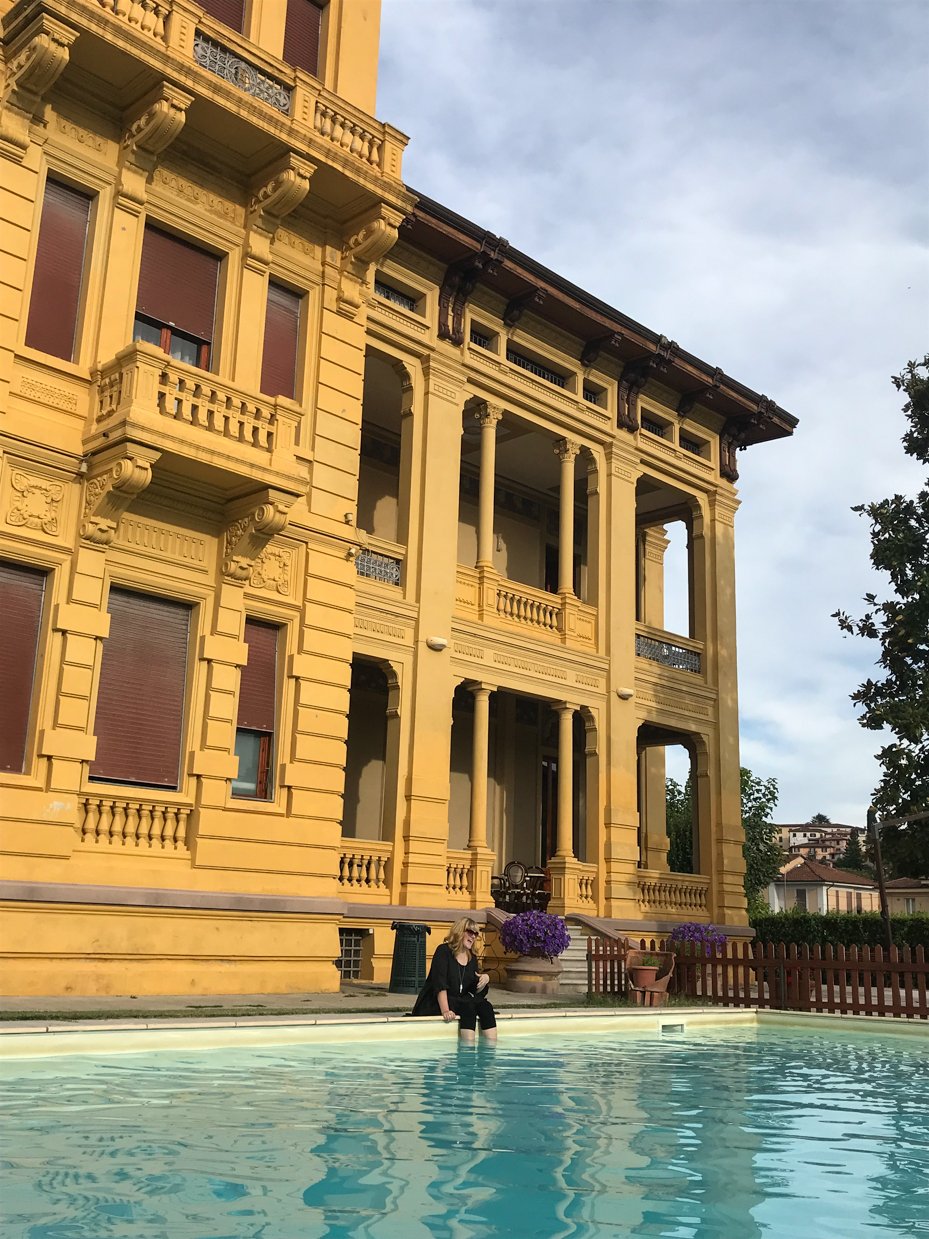 Somehow, beyond any logical explanation, I don’t have pictures of our room!  I filmed a tour and saved them to my Italy Instagram Highlights, but they aren’t showing up there, for some reason.  I did take some pictures in the bathroom, of all places!  I was in love with how the light passed through the open window onto the clawfoot tub. 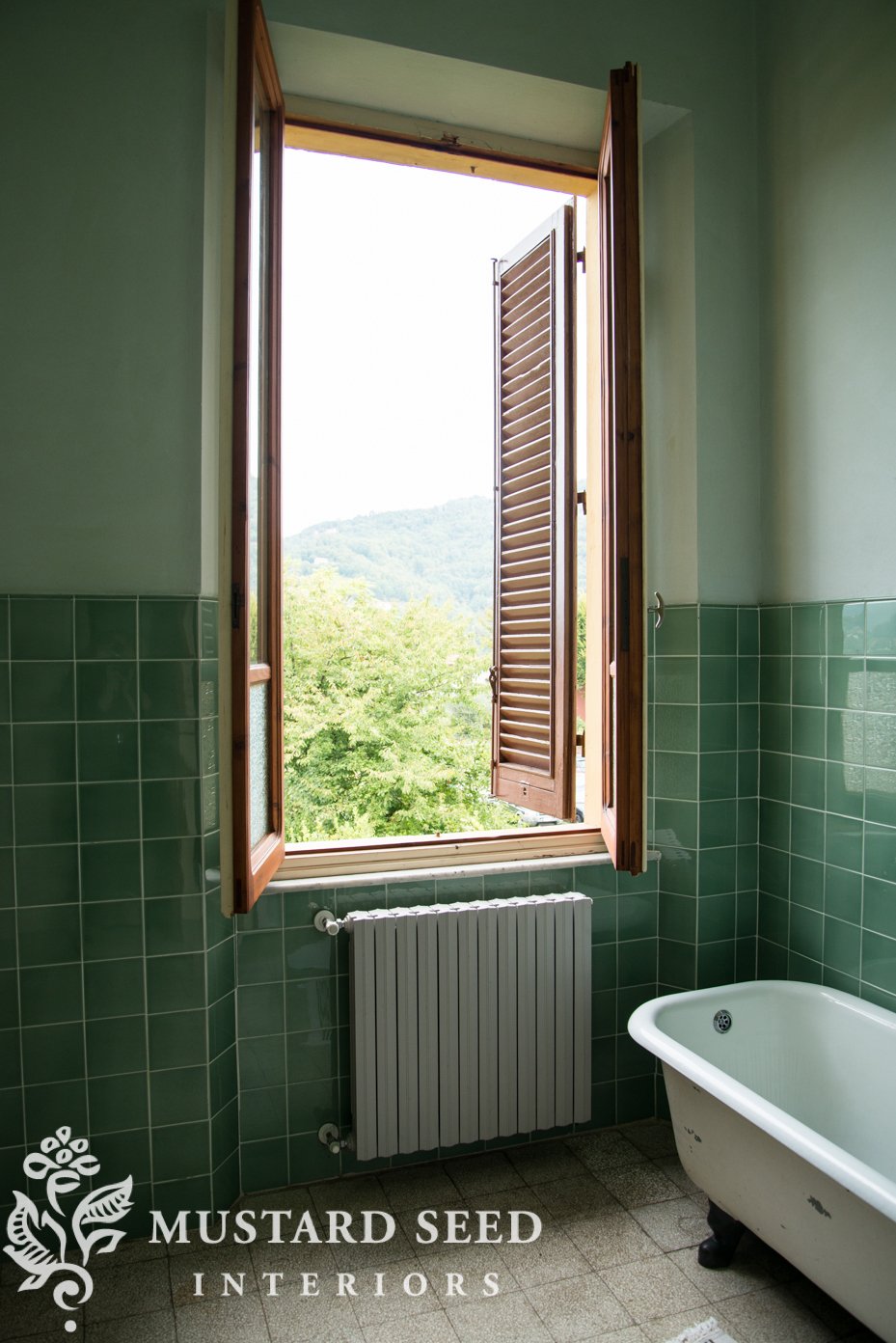 And opening the windows and shutters first thing in the morning was a perfect way to start the day in Tuscany.  I would take in the view for a minute and the air that had a bite to it before the warmth of the September sun overtook it.  You could hear the chatter from neighboring homes – dogs barking, men having a boisterous conversation between balconies, and boys listening to the radio.  I’m sure it was a sporting event commentary, but the words were spoken with such fervor that it sounded like a passionate political speech.

Noises that invade a private space could annoy on a typical day, but here, they were the soundtrack that cued me into the fact that I was in Italy.  I sunk down in the bathwater up to my neck and listened. 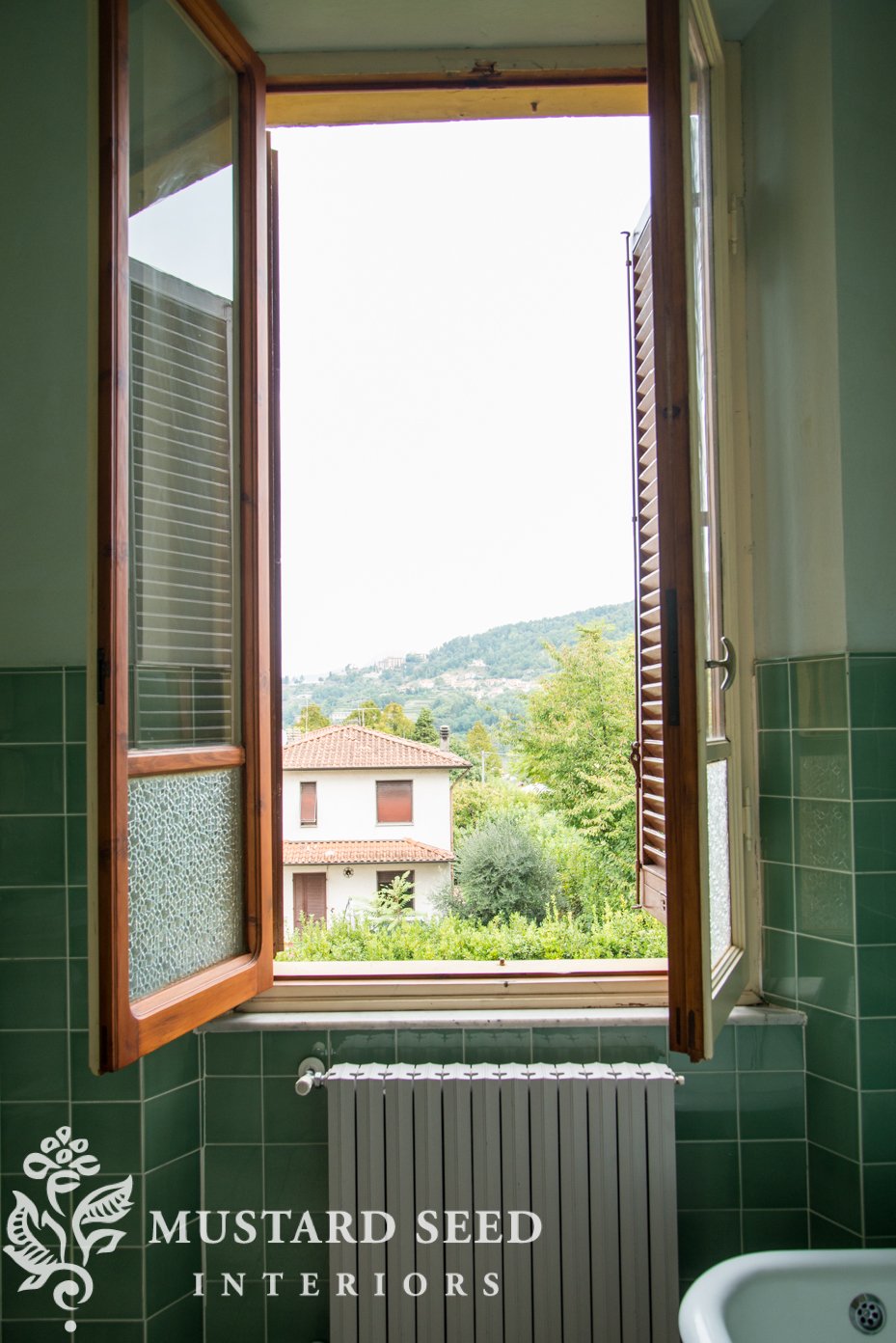 I did take some pictures around the interior of the hotel, though.

It’s a place that feels grand with the high ceilings, tall windows, and transoms, marble steps, and the art nouveau papers adorning the walls and ceilings. 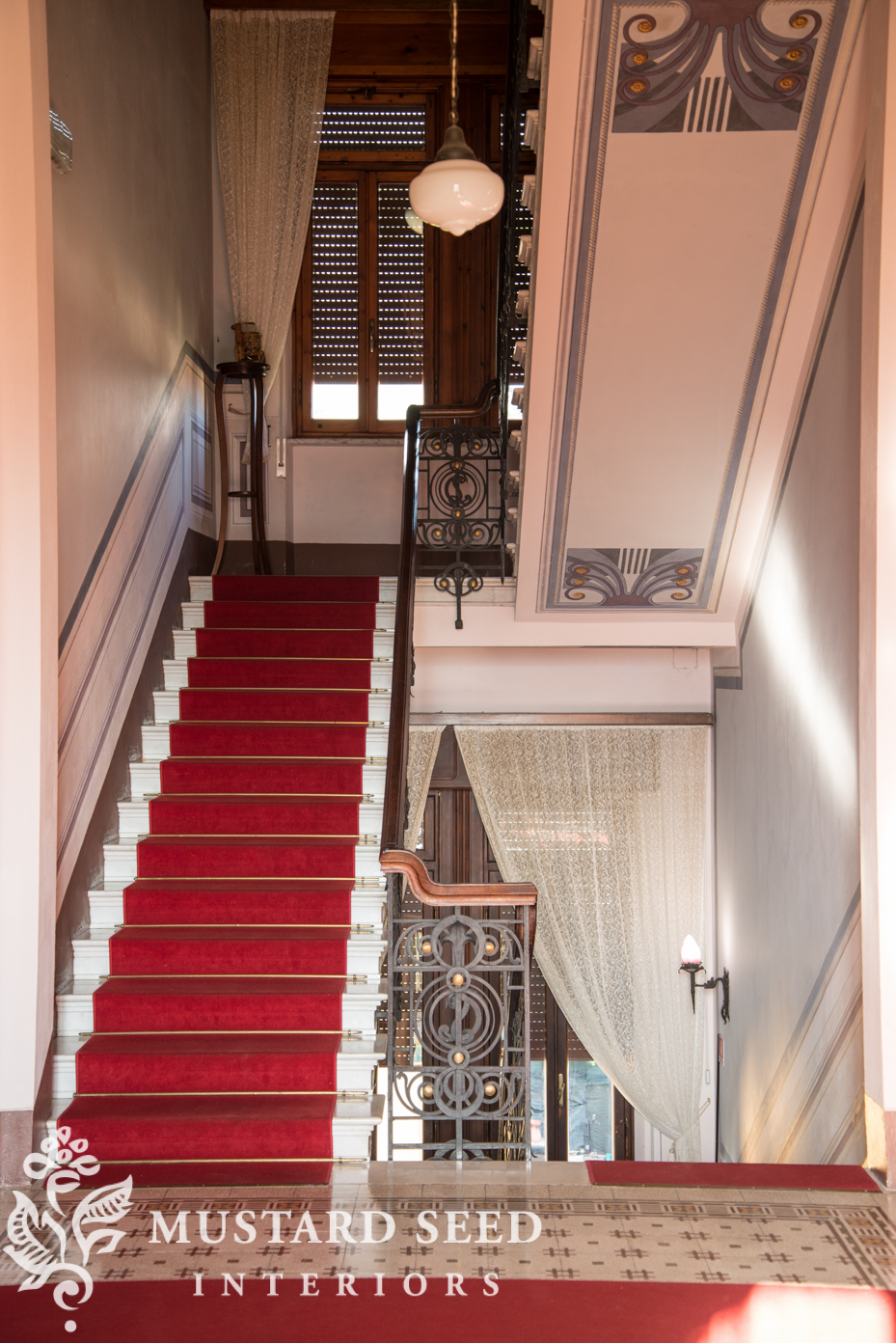 Somehow it still has a homey, hospitable feeling…like nothing is too precious and everything is there to be used and enjoyed. 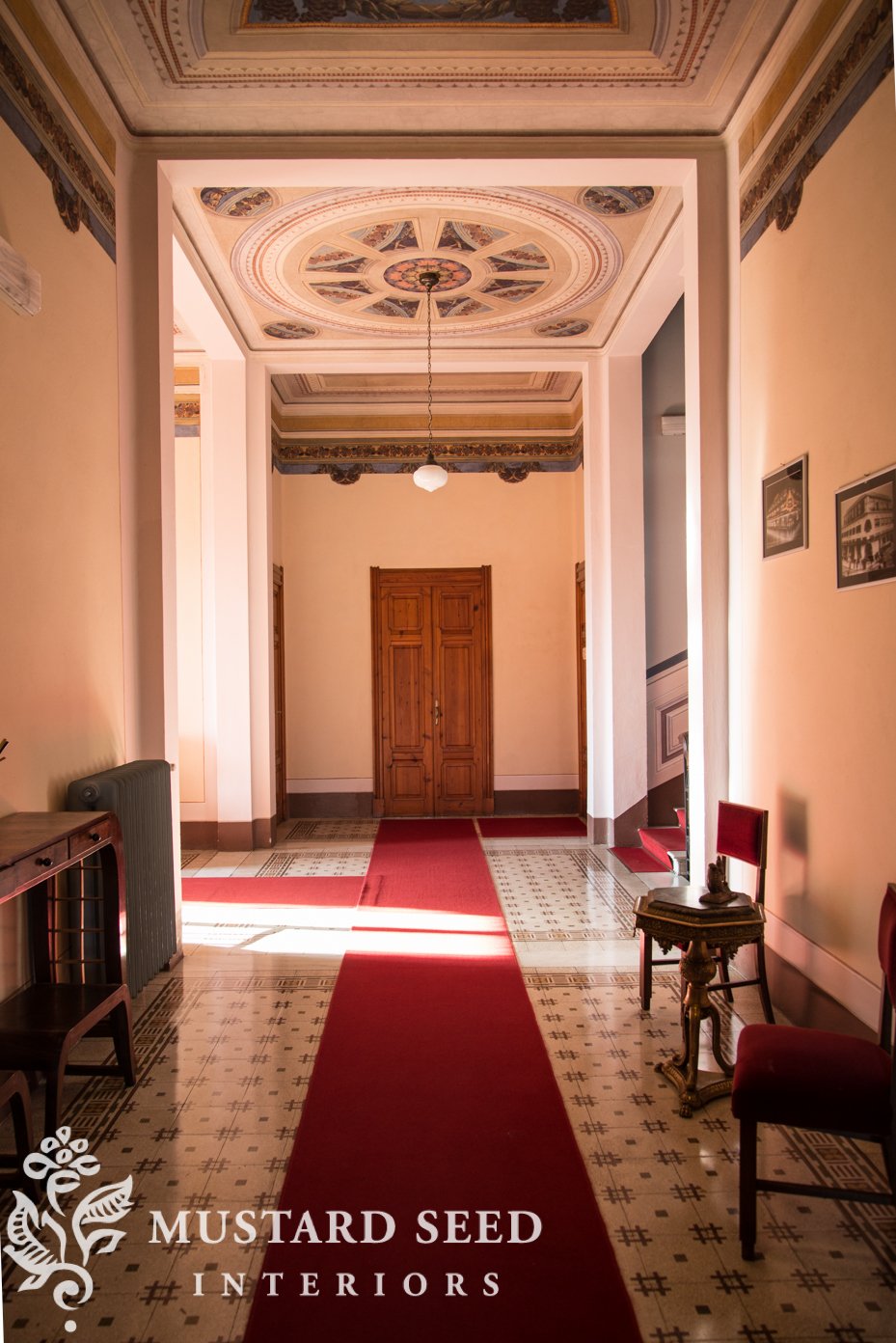 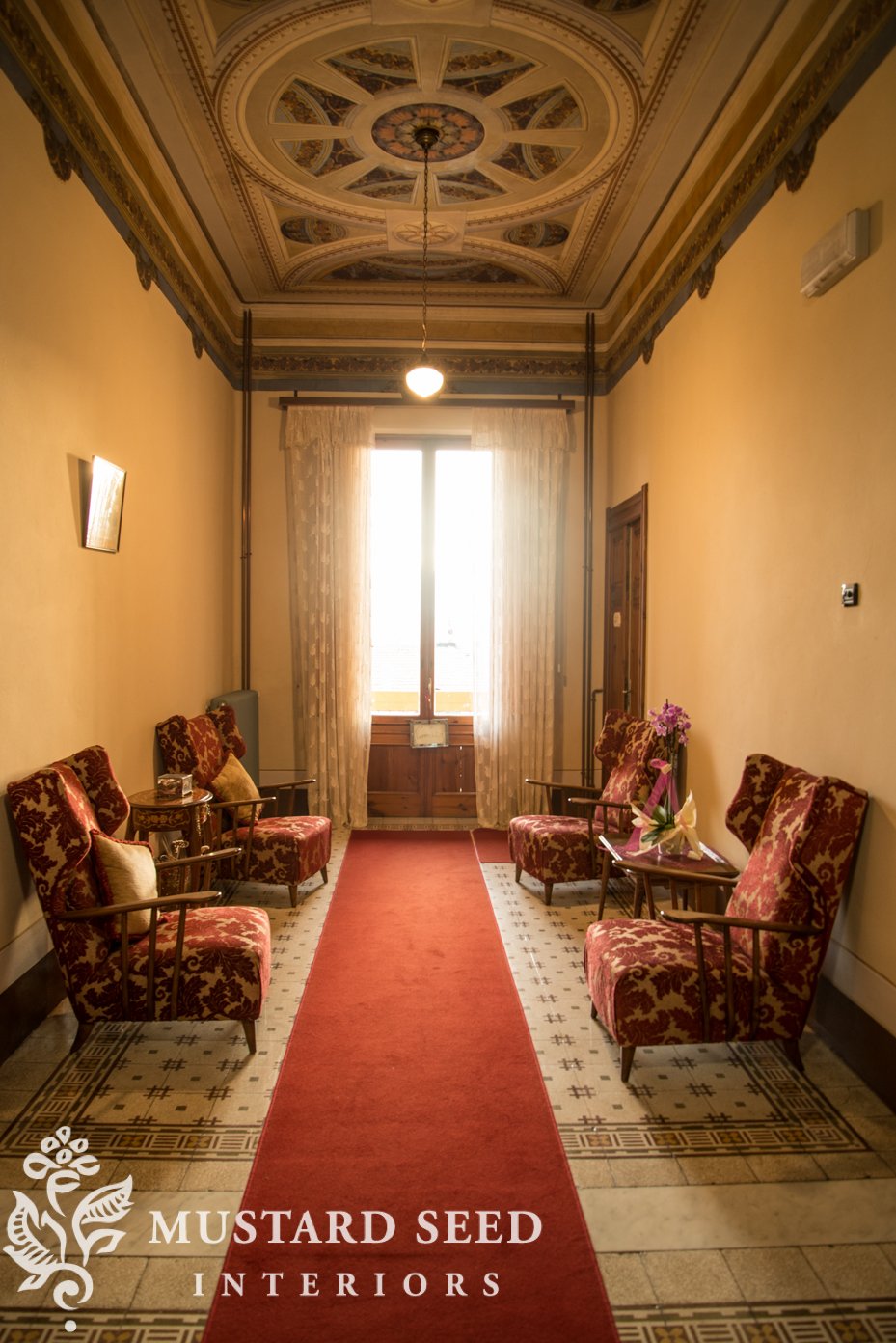 If you want to get some amazing pictures of Barga, climb up the circular staircase to the roof terrace at sunset… 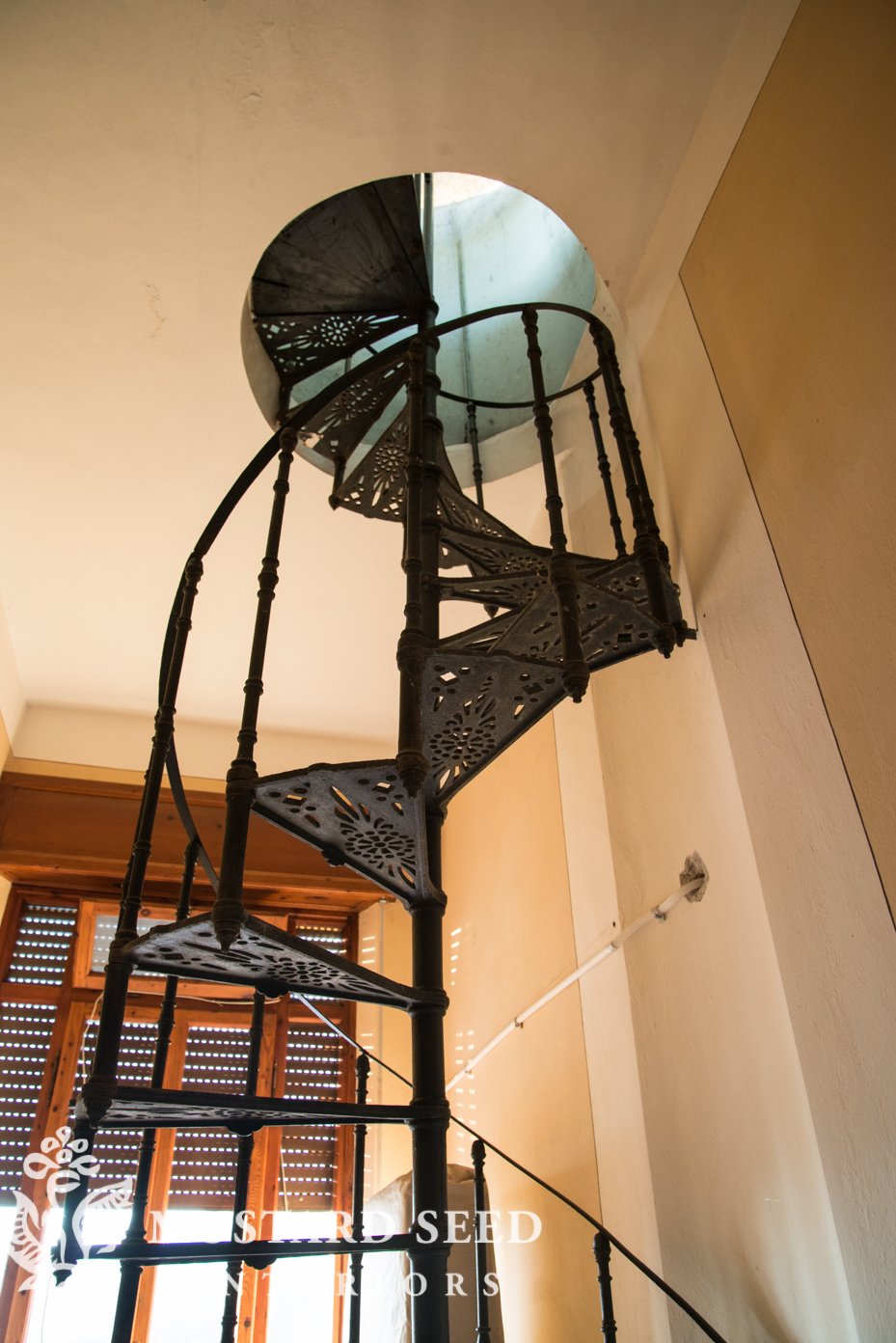 …and you will not be disappointed. 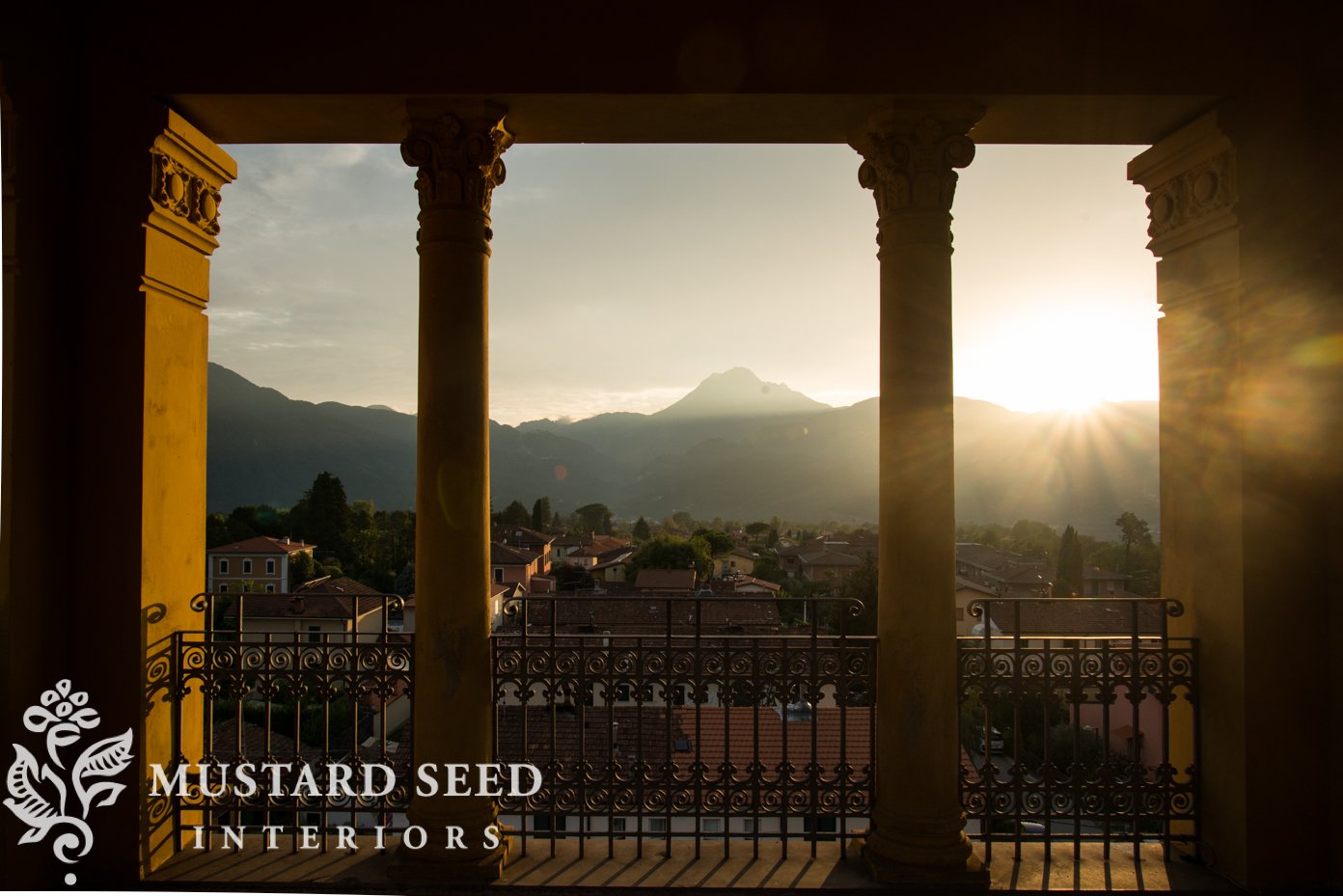 The golden light falls over Barga, so the entire town almost glows.  I stood on the terrace one evening, trying to absorb all of the beauty.  I wished I could set up an easel and oil paints there to take advantage of the impressive landscape, just begging to be painted. 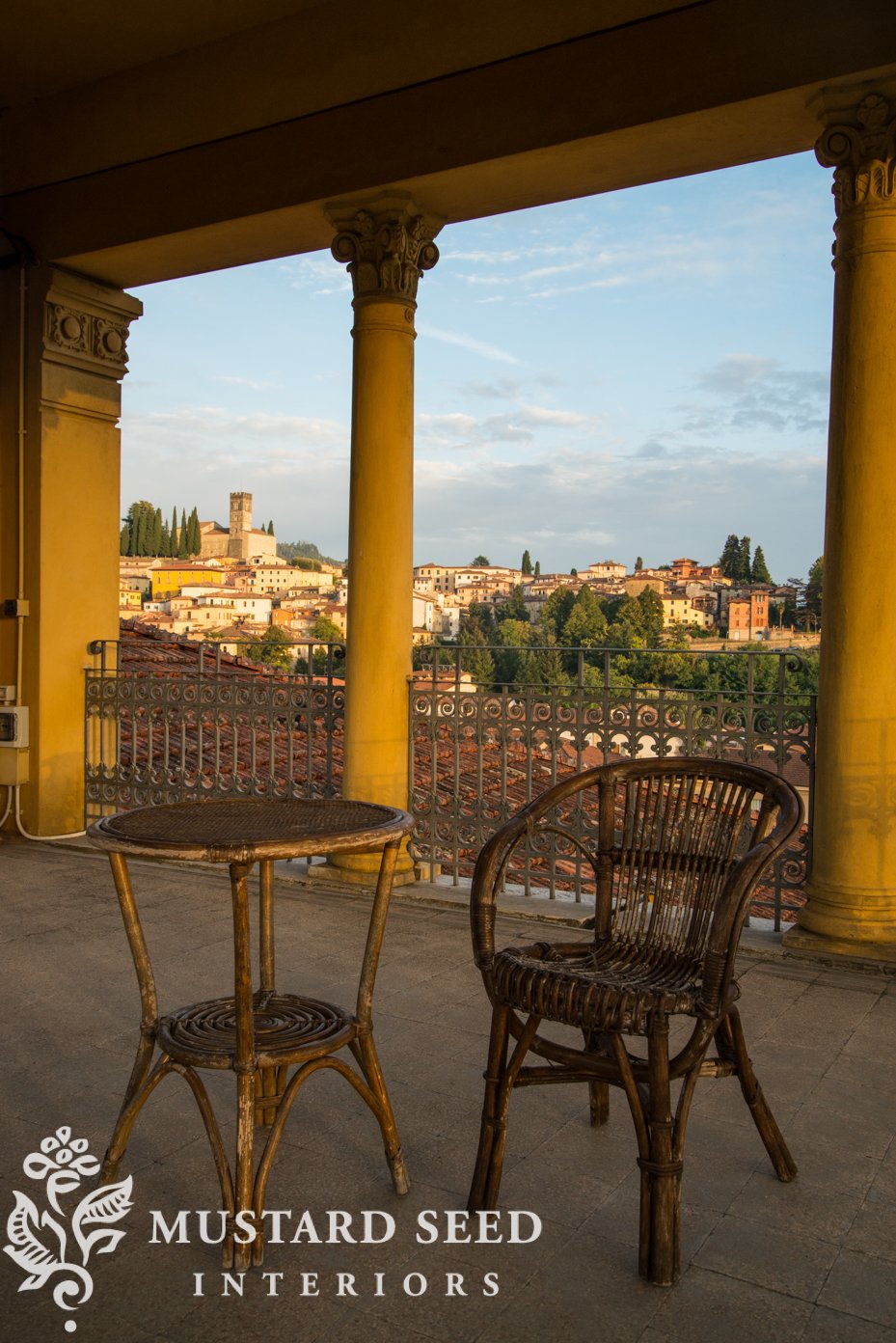 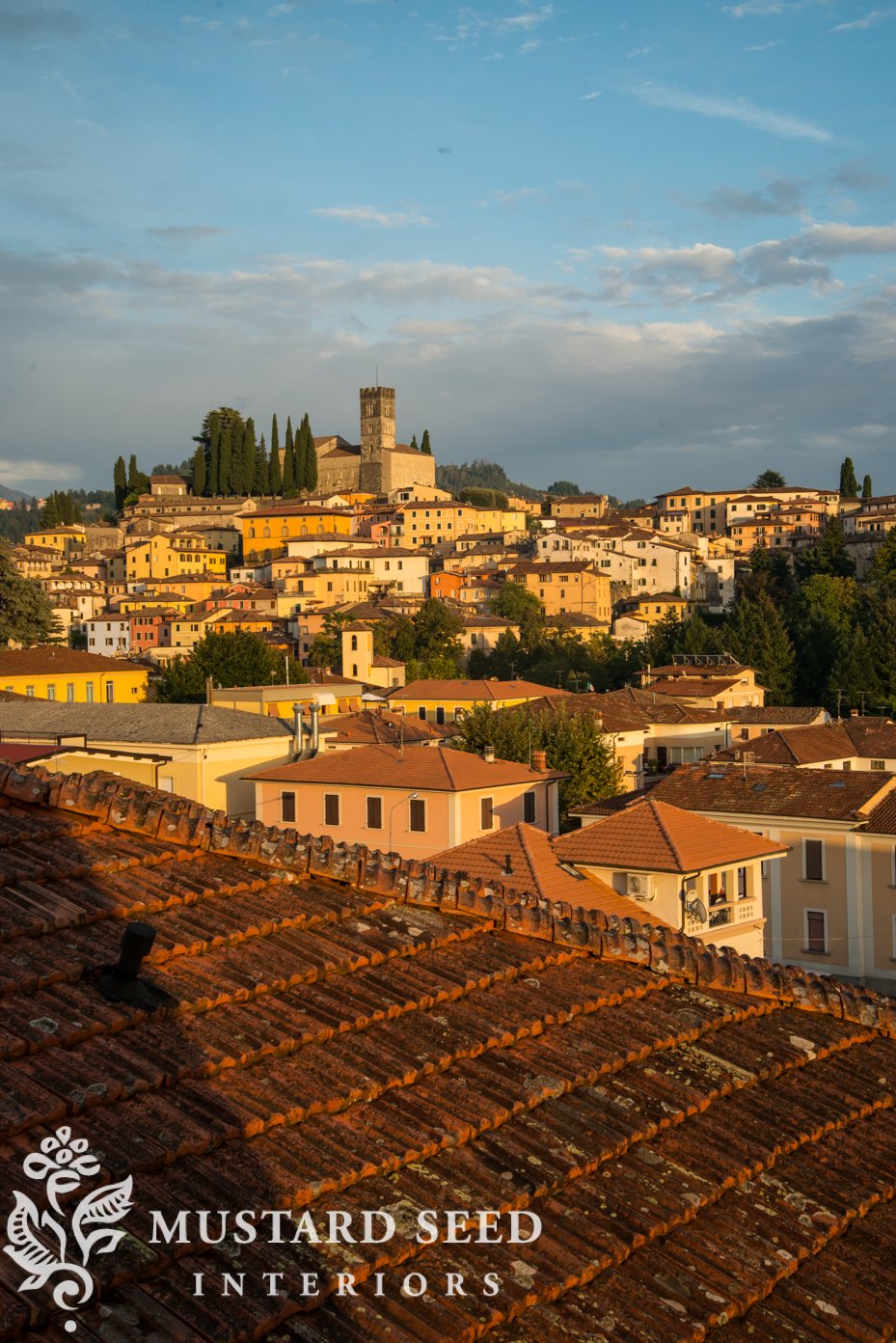 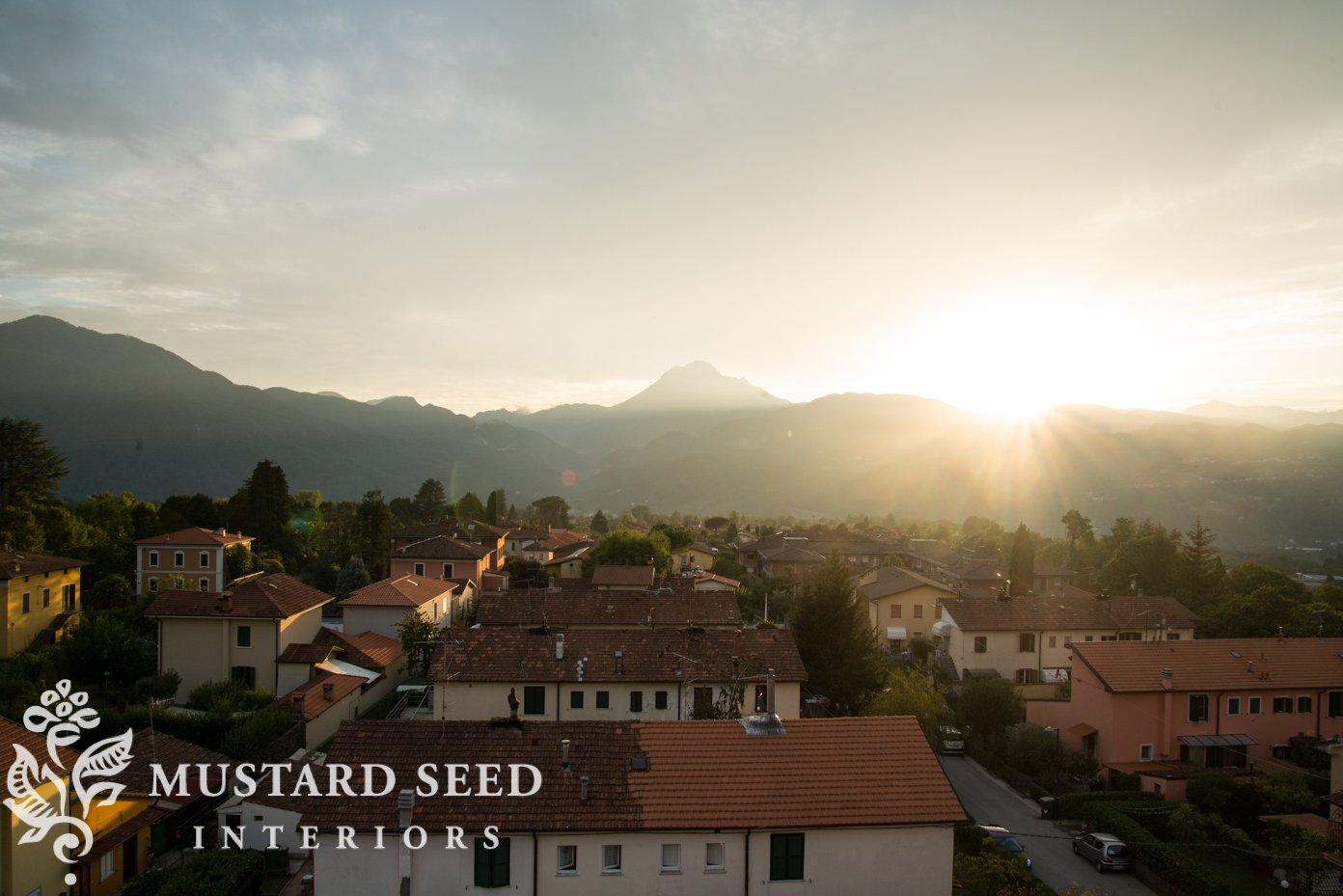 The only downside to staying at Villa Moorings was we had to “hike up the mountain” to get to the walled part of Barga, which is where most of our events took place.  We had to be strategic about bringing everything we needed for the day and, for the sake of my mom’s inflamed achilles heel, we left ourselves plenty of time to walk wherever we needed to go.  It gave me a good excuse to stop and take pictures frequently.

(Villa Moorings is the tall building in the picture below.  This is taken from the top of the hill to give you an idea of why we called it a hike!) 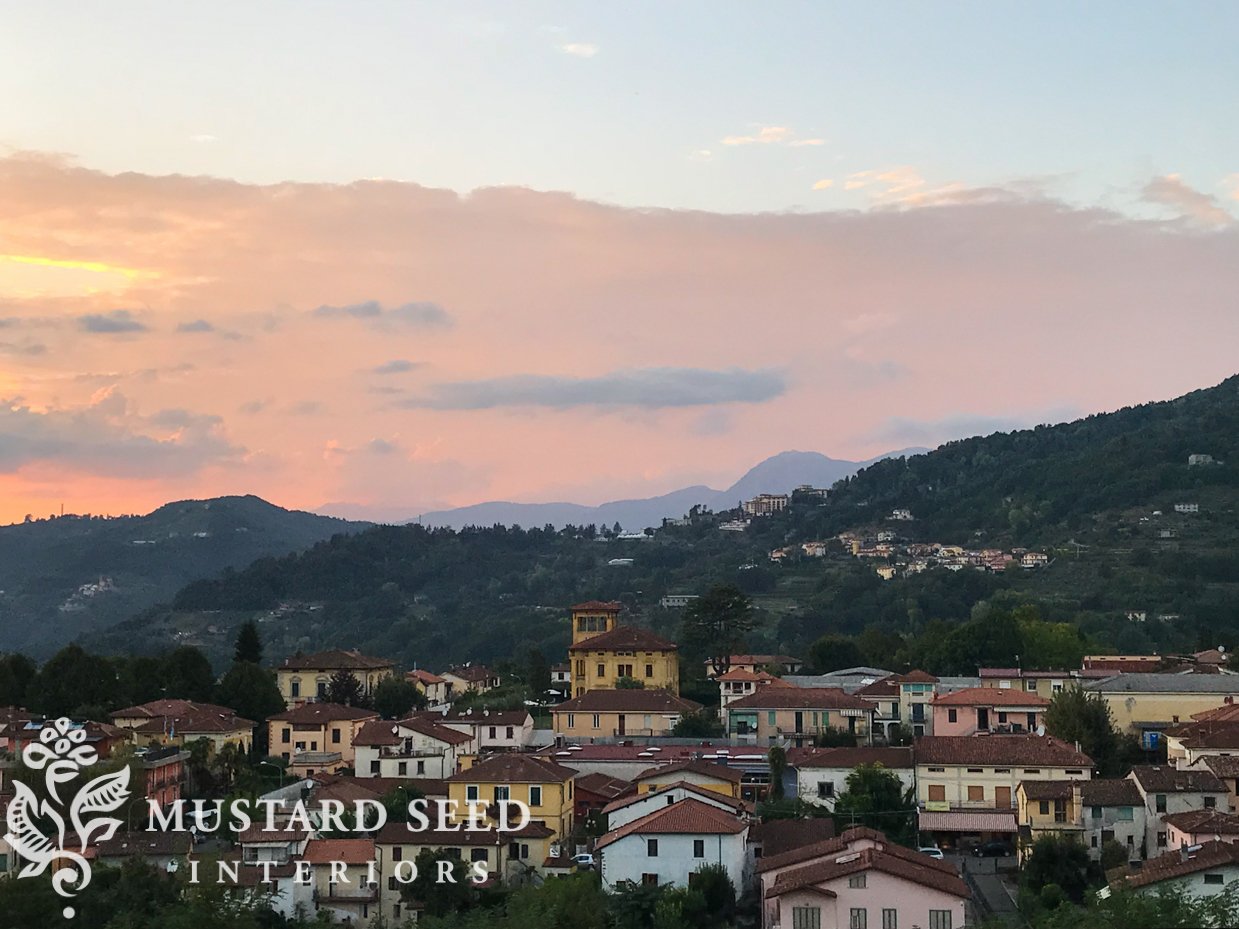 By the end of the week, though, the walk was easier and I came to enjoy the time outdoors and the exercise.  We were fortunate that we had good weather because walking in the rain would’ve been a bummer! 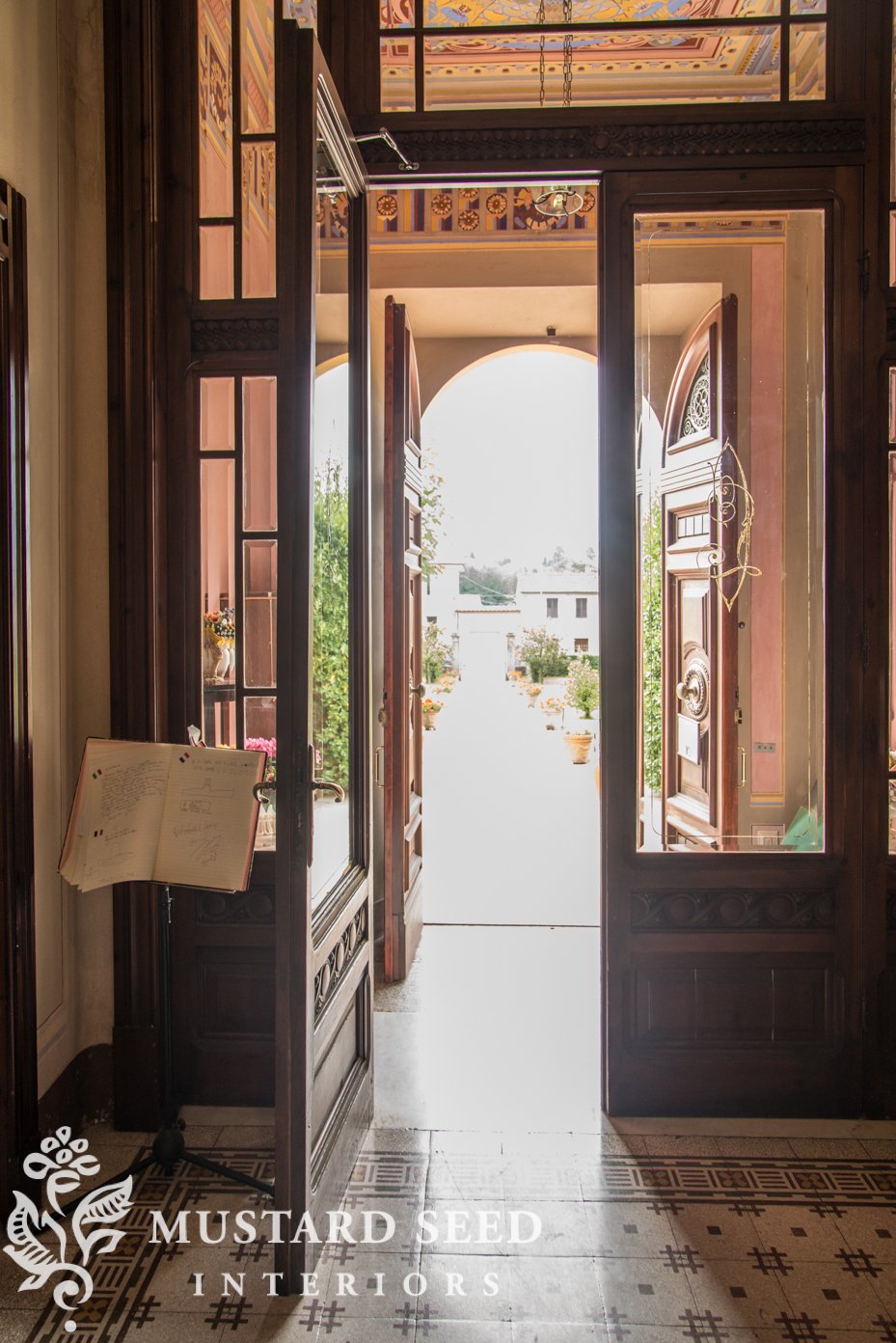 When we packed up our bags to leave Barga and Villa Moorings for Florence, it was a morning of mixed emotions.  I was sad to be leaving such a beautiful place and the lovely people I had spent time with there, but I was also ready to be home.

As I walked down the path lined with flowerpots for the last time, I was filled with a sense of satisfaction.  My time in Barga was everything I hoped it would be and more.

That leg of the trip felt complete.  I swung my suitcase into the trunk of our taxi, now heavy with linens, copper, art supplies, leather goods, and other purchases I made in Paris & Lucca, and I got into my seat brimming with wishes for things I’d like to experience the next time I’m able to visit that corner of the world. 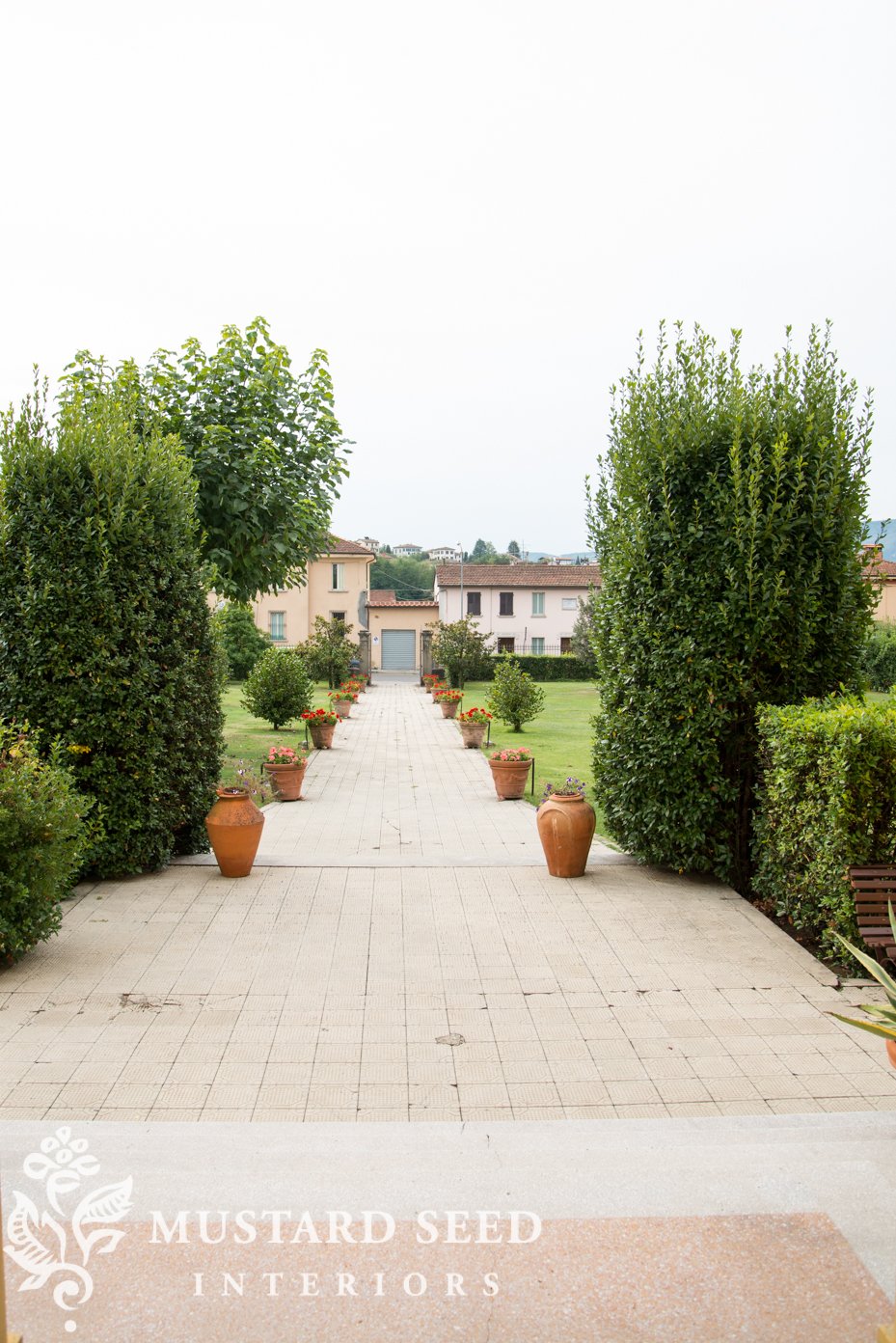