tips on decorating cakes with flowers

Before we chat about flowers and cakes, two things…  The winner of the mini landscapes is Ann Stuart Cassell!  Congrats!  And yes, for those asking, I will do more of those minis and have more giveaways in the future.

Second, a new The Creative Exponent podcast is available – Episode 5: Don’t Wait for Perfect.  You can listen to it HERE.

As soon as I put the jade cake pedestal in my shopping cart, I envisioned a four-layer naked cake decorated with flower sitting on top.  I have long loved that look, specifically done by Courtney of French Country Cottage.  She just has a knack with flowers.  And cakes.

I initially started thinking through my cake pans, figuring out how I would make this cake and then I remember the time I baked 5 dozen mini cupcakes the night before the Lucketts Spring Market and realized I should just hire this out to have it done properly and allow my focus to be on the things I do best.  And I happen to have a friend who has a cake-baking company, so I hired her to bake the cake for me and I’m so glad I did!  I would’ve been stressed out trying to get that naked icing just right.

I was going to take on decorating the cake with fruit and flowers, though, so I had to do some research on that.  Over the years, I’ve become a bit more practical when it comes to table settings and decorating when it comes to food.  It’s become a mild pet peeve of mine to see inedible (even toxic) stuff on plates or worse, on food.  I’m guilty of it, too!  Putting pinecones, feathers, evergreens, and moss on plates that people are supposed to be eating off of!  Sure, it looks great, but it can’t be done in real life unless you plan on having everyone look at the table setting, then you dismantle it and wash the dishes, so you can actually eat off of them.

Several years ago, I decided I wasn’t going to do that.  Inedible items can be used, but they needed to be off the plates and away from the food.

Tablescapes designed for photo shoots have to be a little over-the-top in order to look full and festive in a photo, but they can still have an element of realism and practicality.

So, I had to look into what was okay and not okay when it comes to flowers on cakes. 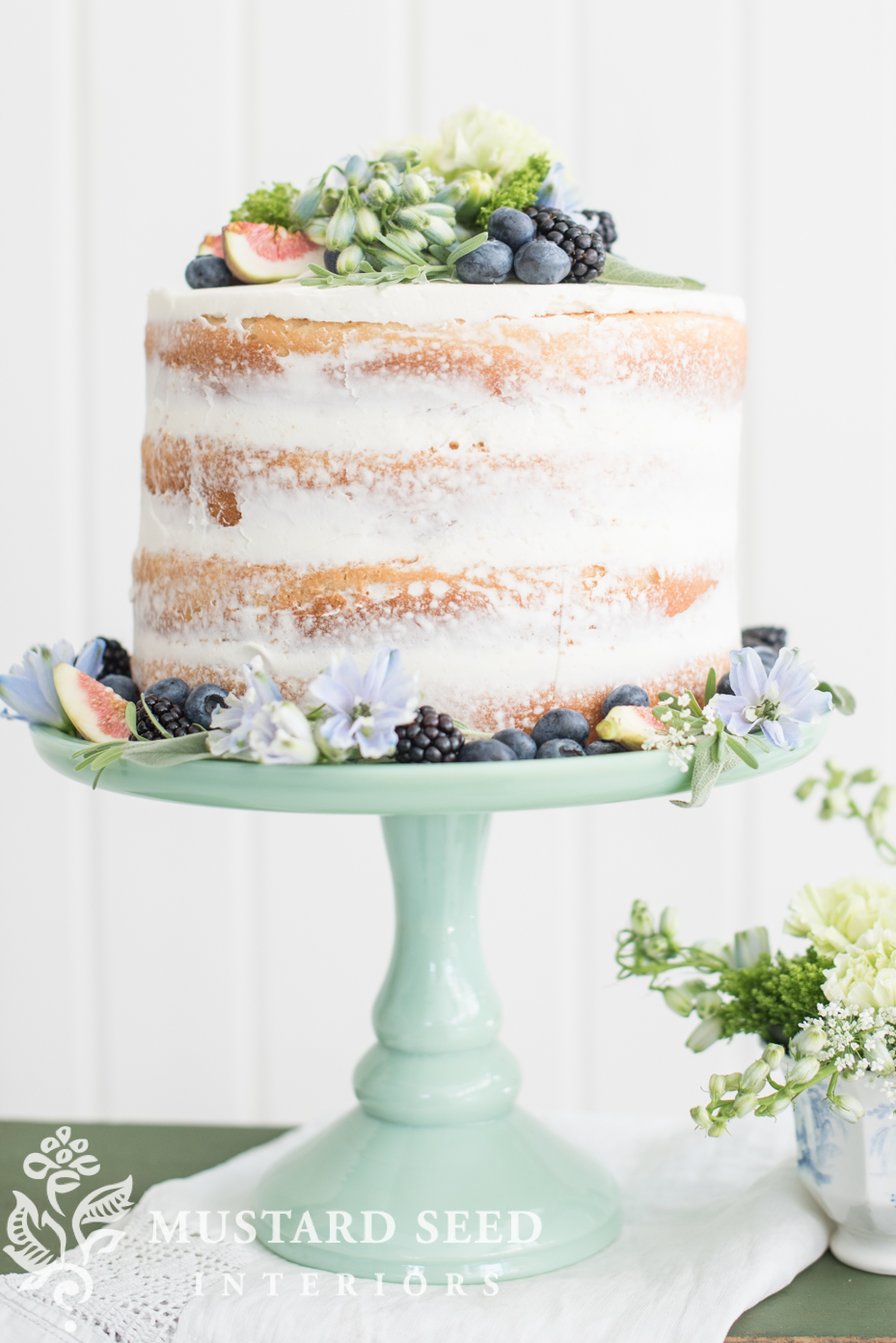 The first thing I learned is that there are flowers that are edible or at least food safe.  You might not want to eat them in large quantities, but they can come in contact with your food and/or you can technically eat them.  HERE is a good article I found with a list of flowers that are safe to use as well as how to prepare them.  You don’t ever want a flower stem to come in direct contact with your cake.

The other thing to consider is how the flowers were grown.  You have to be certain that pesticides weren’t used on the flowers, because that can be a health concern as well.  The best place to buy them is from a florist (who can verify that the flowers are food safe) or a natural/organic grower at a local market.  Or, of course, you can grow your own if you’re handy in the garden!

Given that this cake wouldn’t be sitting out at a wedding or a party for hours and I was a bit crunched for time, I really didn’t want to take the time to shop for specialty flowers, prepare each bloom, etc. so I took some shortcuts that still kept the cake safe to eat. 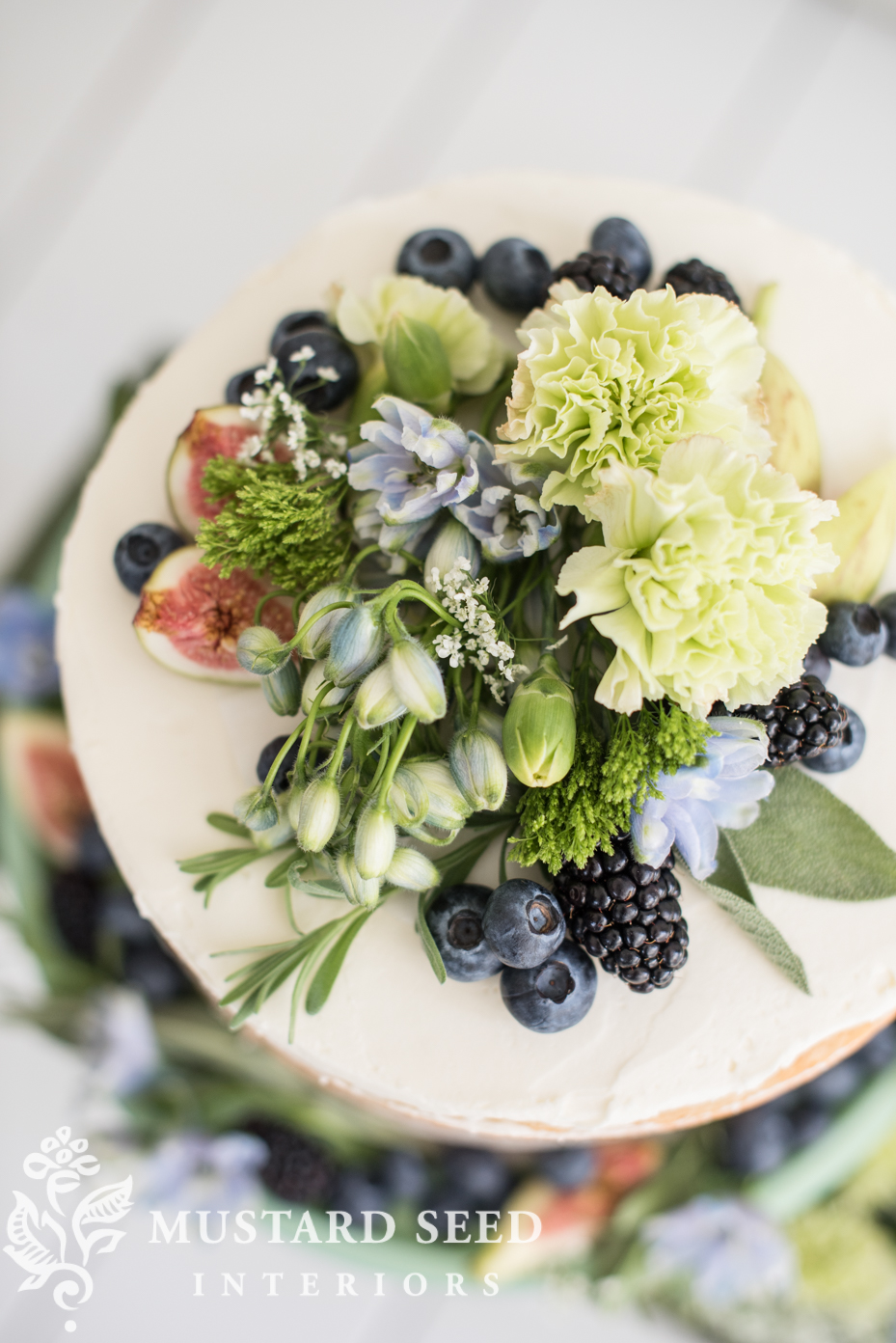 First off, I used fruit and herbs as buffers, so they prevented any flowers from coming in contact with the cake.  I did this on the top as well as the sides.  Sage, lavender, berries, and figs were the only decorations that came in contact with the cake.  The other precaution I took was putting a piece of parchment paper cut in a circle on top of the cake to provide a layer of protection between the cake at the flowers. 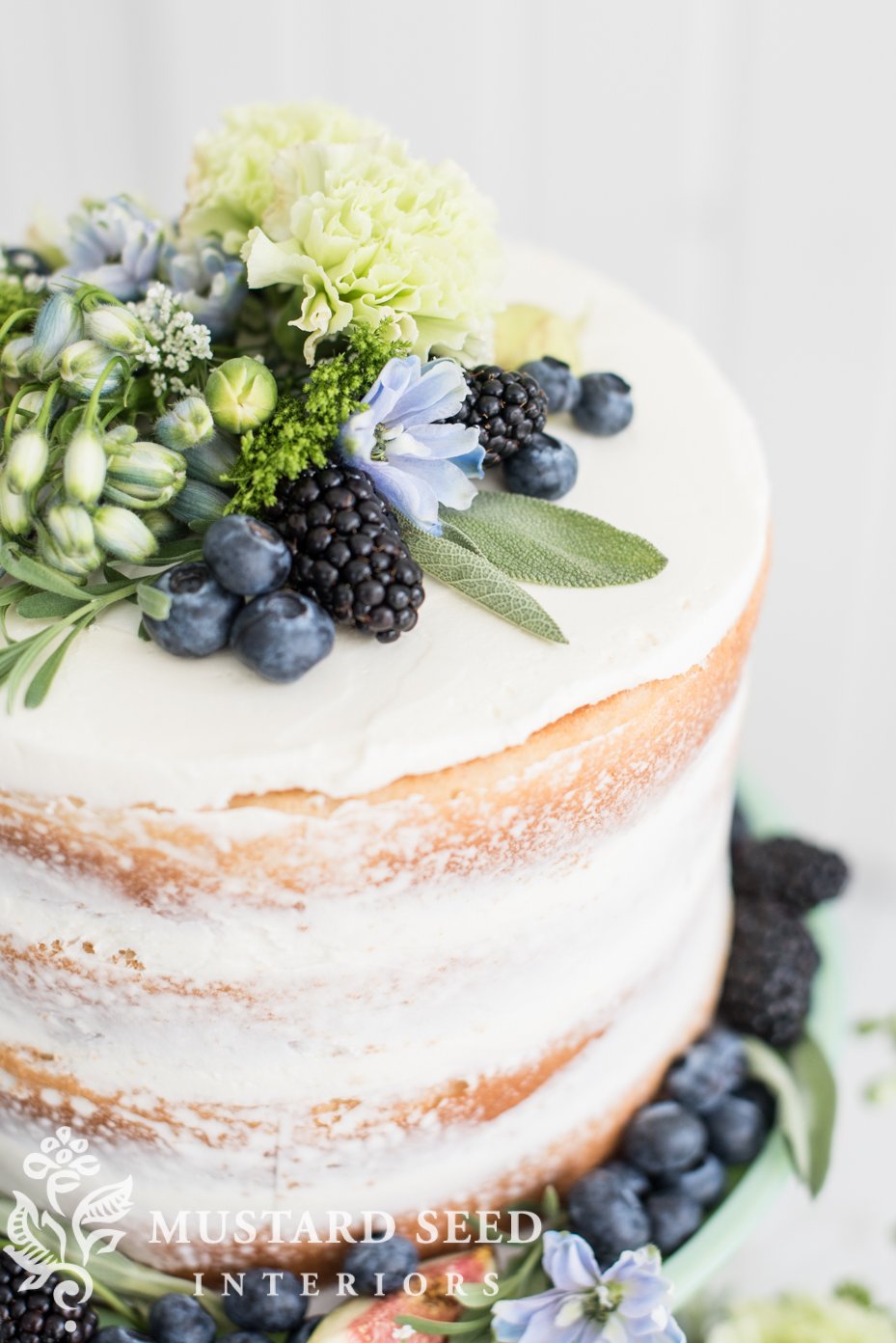 Even in a close-up picture, you can barely see it.  You can see a little peek of it in the picture below… 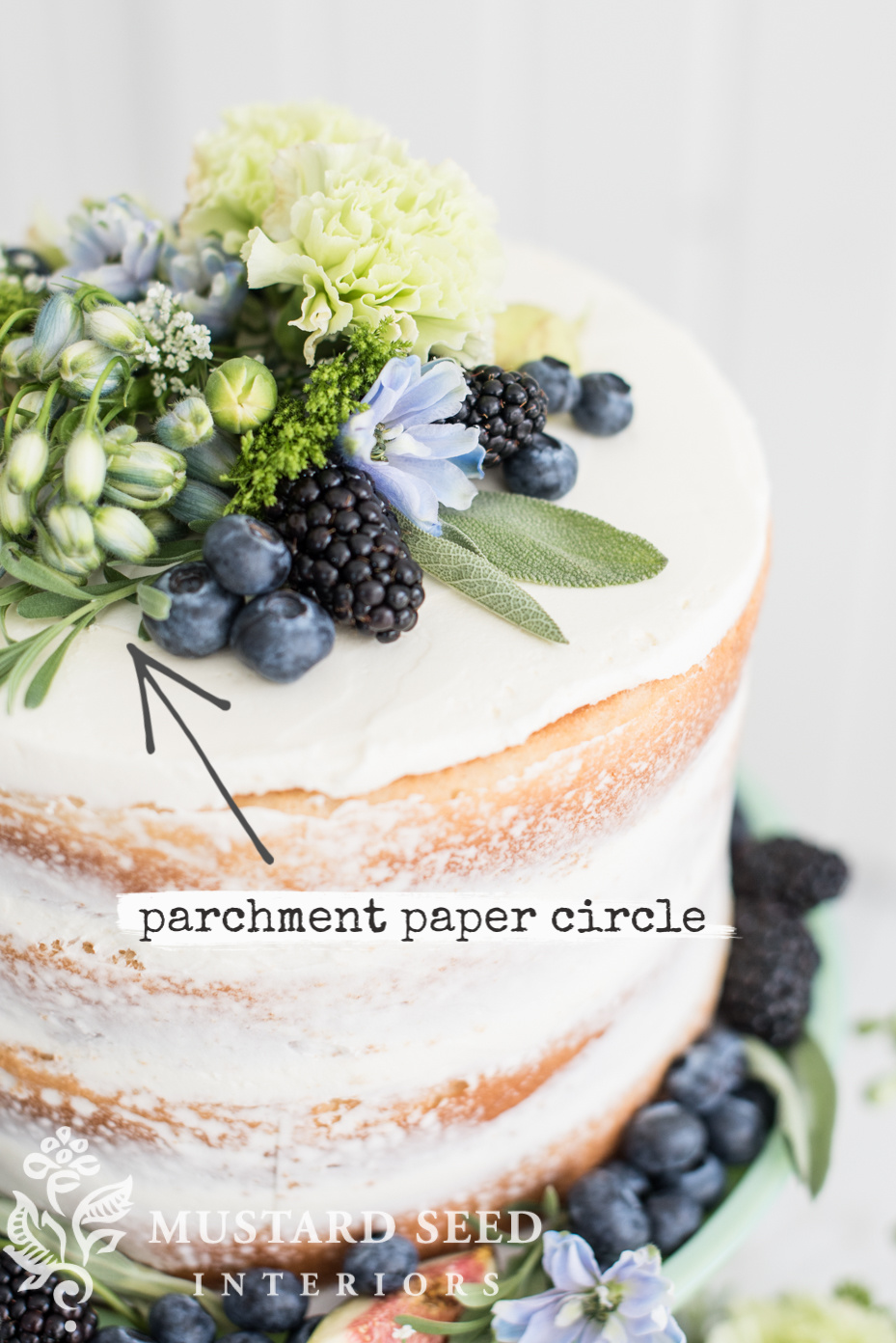 And, can I just say, that Trader Joe’s had the perfect assortment of flowers and fruit for me that day?  Even the purple flowers leaned more blue for me.

If you do use this technique for a cake, it’s still a good idea to make sure you’re not using flowers that will shed as you’re working with them.  You might end up shedding on the cake inadvertently.  I was very meticulous and intentional about each flower I used and where I placed it.  I mean, Megan makes very good cakes and we wanted to be able to eat it!  Some of it, anyway.  It was a lot of cake!

Before we cut into it, I dismantled the decorations carefully and served the cake with berries I had in a separate bowl. 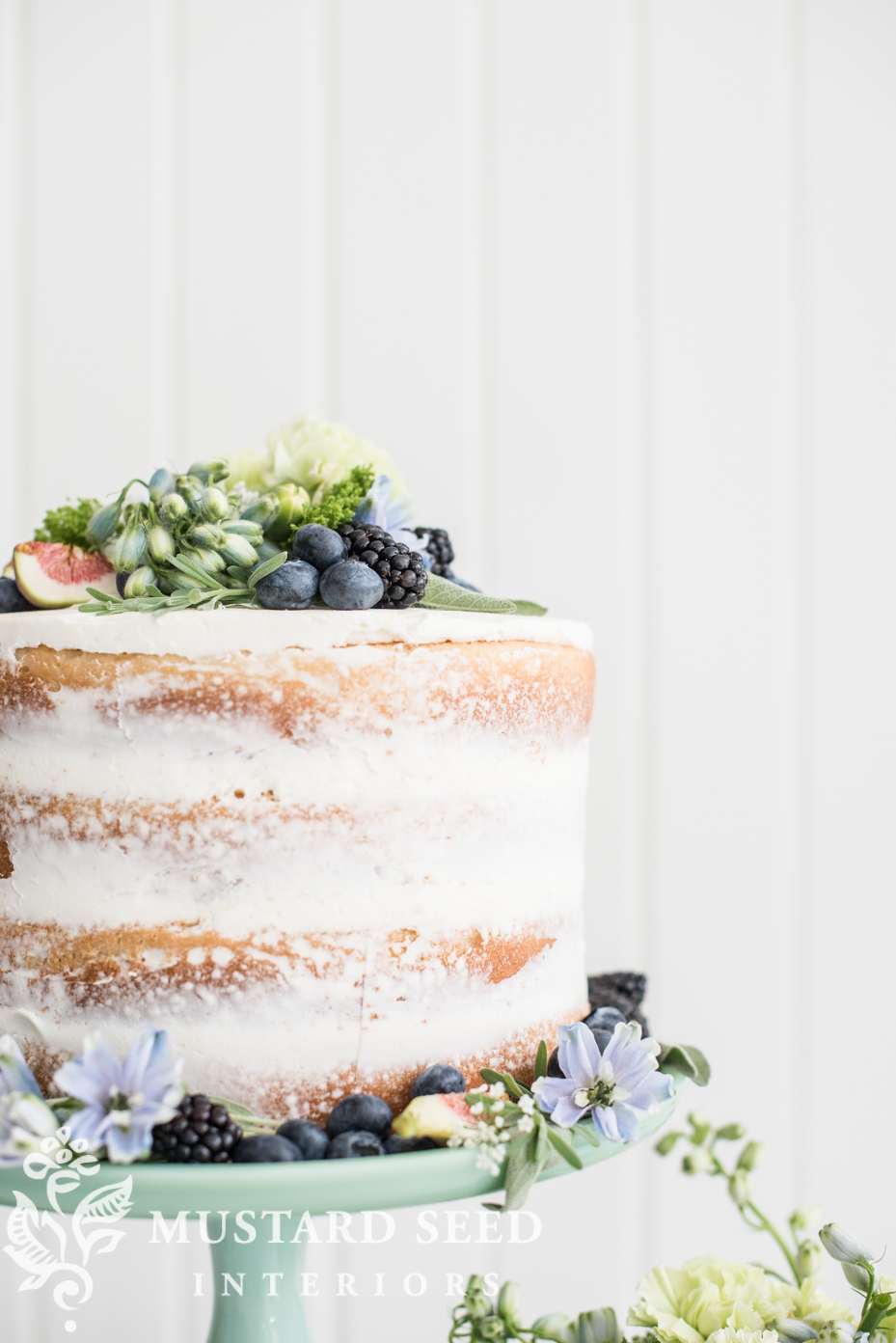 All of this to say, don’t look at Pinterest and assume that something is safe and/or smart to do.  Especially when it comes to mixing decorating with food, make sure you do your own research. 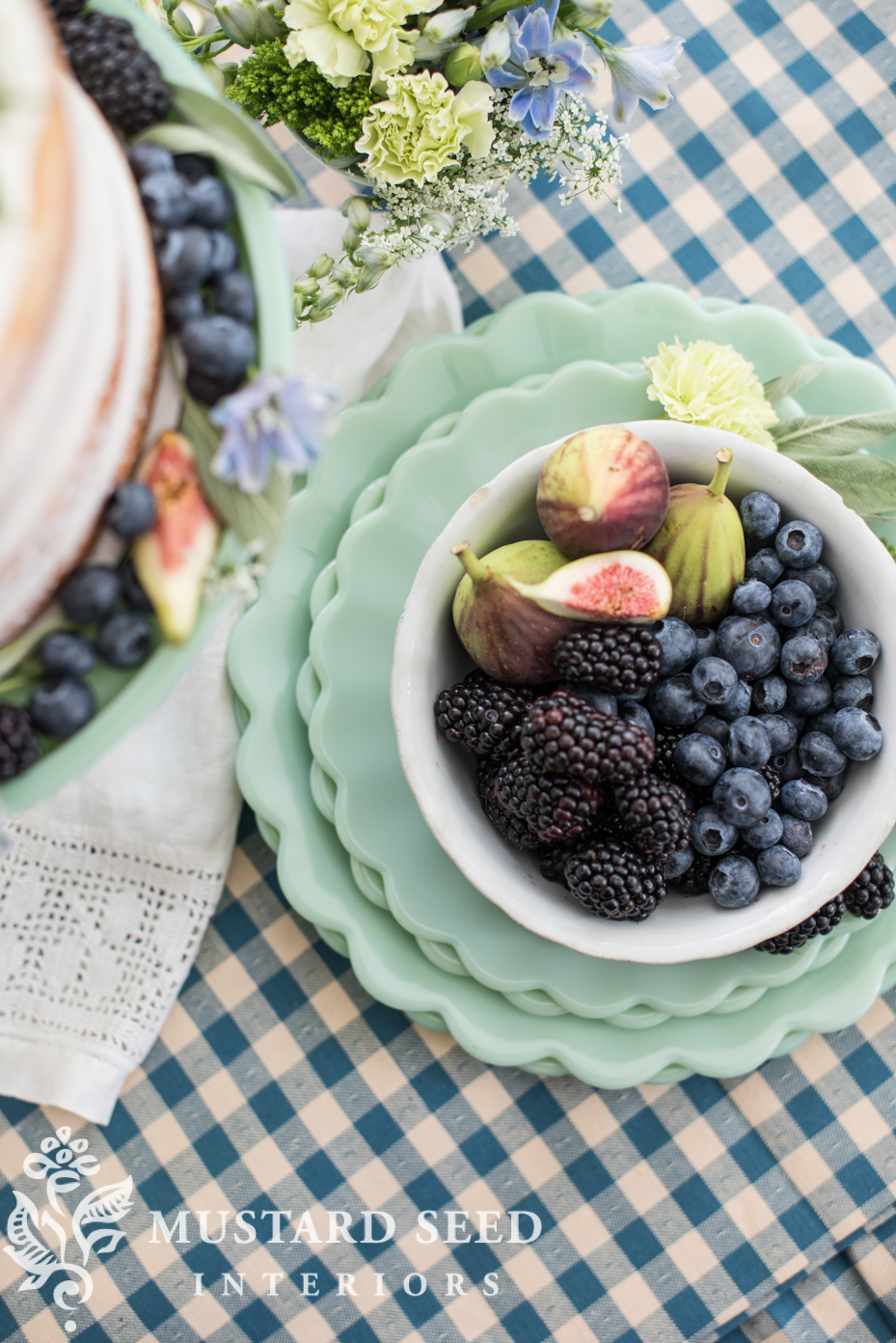 On a side note, I had never eaten a fresh fig before, if you can believe that, so I gave them a taste test.  I love figs in things but have never had them raw.  I have to admit that I almost didn’t try one because of the fuzzy texture, but they were quite tasty.  I’m a new fresh fig fan.