I’ve been asked to share my thought process for styling a photo shoot, specifically with a piece of furniture, and this post is in response to those requests.  I think styling is something that is hard to teach, because it is an art in itself and is based so much on personal taste.  As I walk you through my thought process on styling this piece, you might like one of my “rejects” better than the one I liked and that’s okay.  I’m hoping that through sharing my thought process, it can help you think through your own process, so when you’re styling shots you can be more intentional with your choices.

The first thing I learned is that I am much happier with my shots when I take my time.  This means putting the camera on the tripod and connecting it to my computer.  This is known as shooting “tethered”.  I used to take a gazillion pictures with the camera and then I would run to my computer, insert the camera card and look over everything to make sure the picture was good.  Then, I would go back to what I was shooting, fix things, take more pictures and repeat.  That was such a pain and a waste of time and I learned that shooting tethered, while it seems fancy and technical, is really simple. 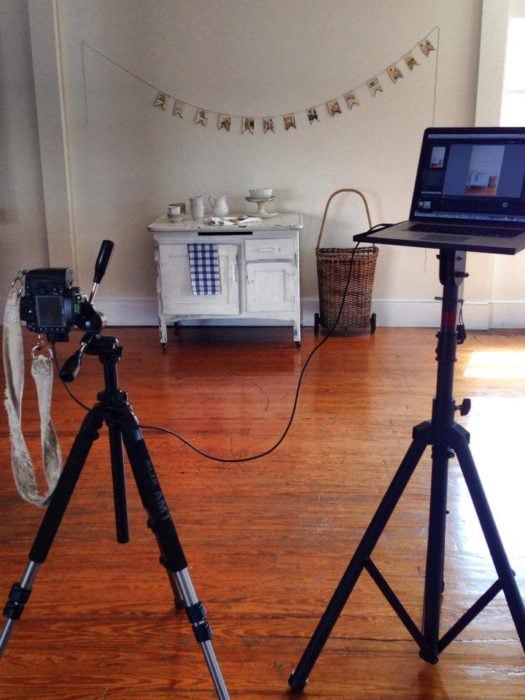 I just run the cable from my camera to my computer, open Lightroom (the software I use to develop my pictures) and select to start “tethered capture” from the “File” menu.  I still control the aperture, ISO and shutter speed from the camera, but then I press the shutter button on the computer.

This may seem more like a photography tip than a styling tip, but it really is both.  When I can see each image on the screen, I catch things I’m not seeing with my eyes…like the way the bunting is lining up against the horse and how the empty spaces in the picture feel.  I can be much more detailed about my composition, because styling a room, styling a retail space and styling a picture are all different animals and it’s amazing how different things can look in a picture vs. in person. 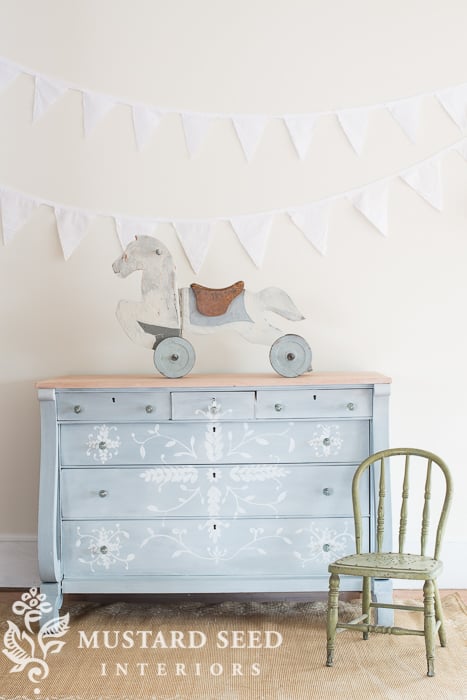 I originally styled this buffet for use in a kids room/nursery.  This is the way I set up the shot at first.  I chose the little green chair for a pop of color and to reinforce the idea that this is a kids room/nursery.  The horse was a no-brainer for me.  The colors worked and I like how the whimsical shape of the horse played with the hand painting.  It seemed to make it playful.  I added the white bunting on the wall for some added texture and another layer behind the horse.  I liked this arrangement, but I called Kriste over for a second design opinion.

I usually work alone on shoots, but I have always loved it when I’ve had the chance to work with other stylists and photographers.  Now that I have Kriste, we can corroborate.  And you don’t need a creative assistant to do that.  Just ask for a second opinion from whoever is around.  What they have to offer might surprise you or it might make you even more confident in your own choices.

We decided to add some books to the little chair, hoping it would bring some “life” to the scene. 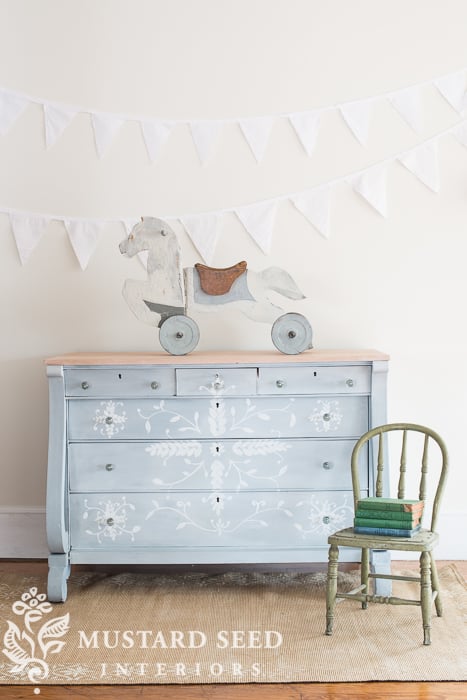 The green just didn’t feel right, so we tried some brown books. 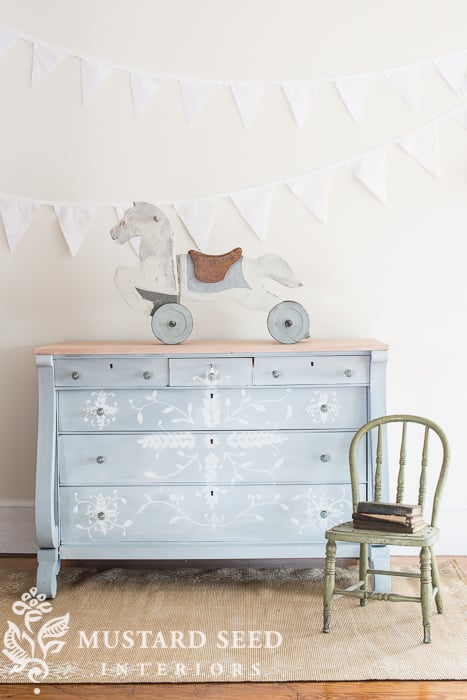 Now they look too dark and just weird.

How about a few accessories…toys and small things? 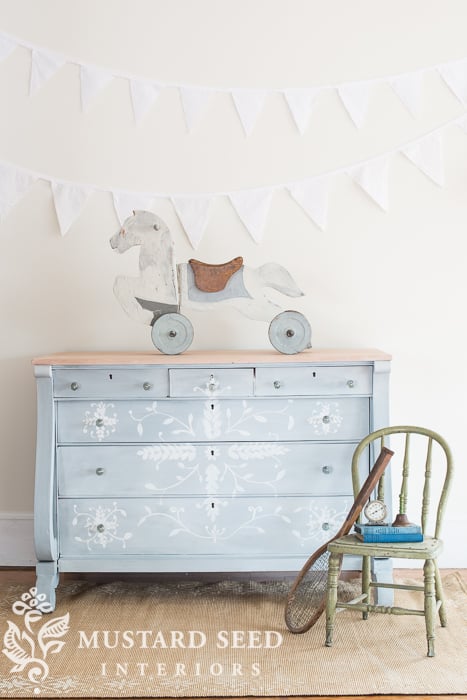 I felt like that was just too much going on.  Too forced, I think.

So, we tried a little chalkboard… 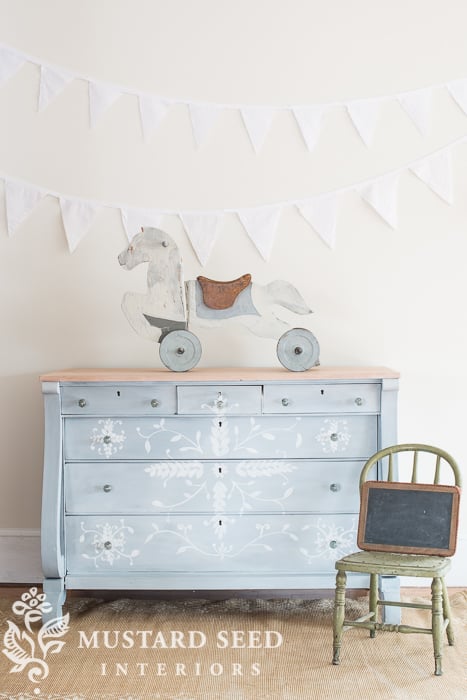 It was kind of cute, but seemed a little random.  We went in an entire different direction and added a large frame in front of the bunting, but behind the horse. 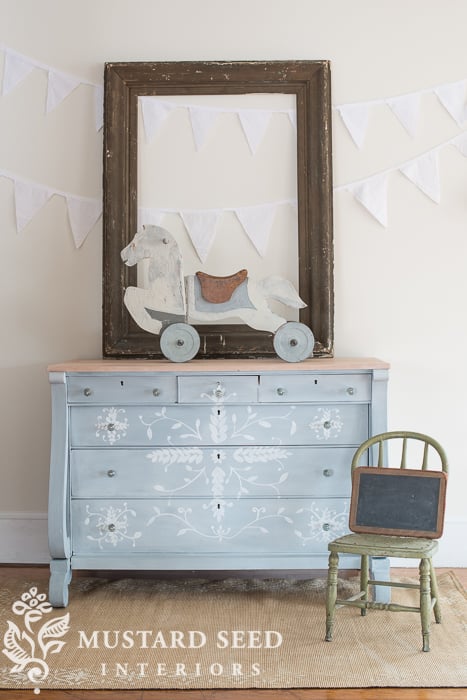 We could not get the frame down fast enough.  I hated how heavy it was over the light dresser.  Since we weren’t in love with the green chair, we changed things up.  I tried putting a wooden plank chair next to the dresser… 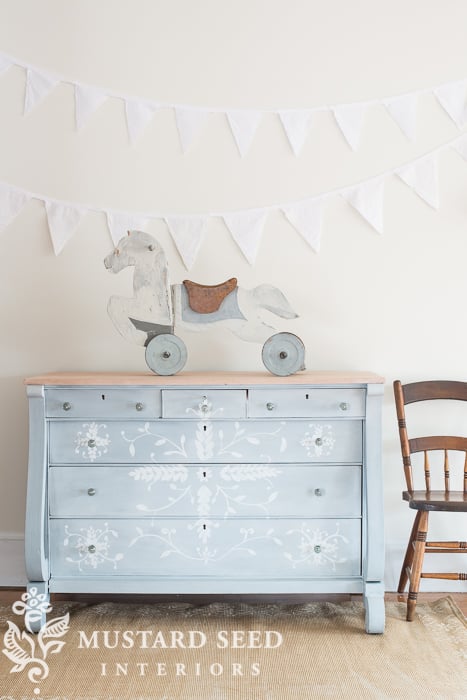 …and we both really liked how it related to the wood saddle on the horse.  We felt like the floor looked a little empty for a kid’s room.  Kids always have stuff on the floor.  So, we added some books and toys… 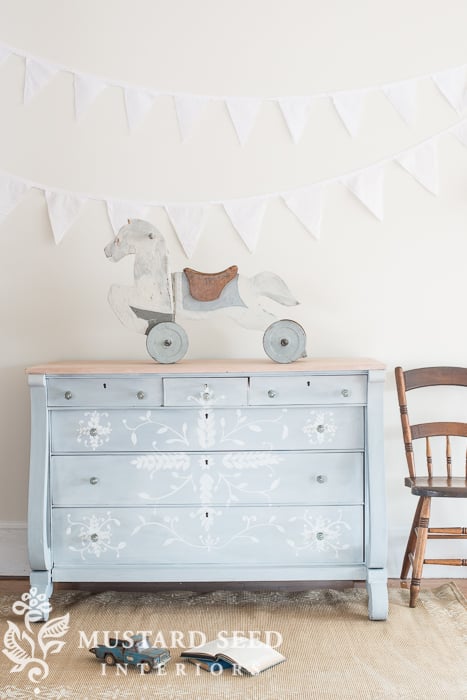 It was almost there, but looks a little too neat.  We spread them out and added a toy cow with the truck and a jar of pencils with the book, so we told more of a story.  A child was playing with the truck and cow and then started working on something else. 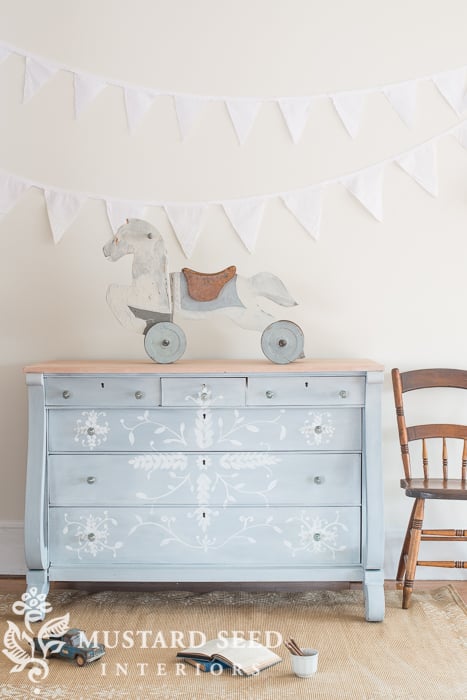 This was the winner.  Sorry, I know the watermark gets in the way of the props on the floor.  Here’s a picture without it… 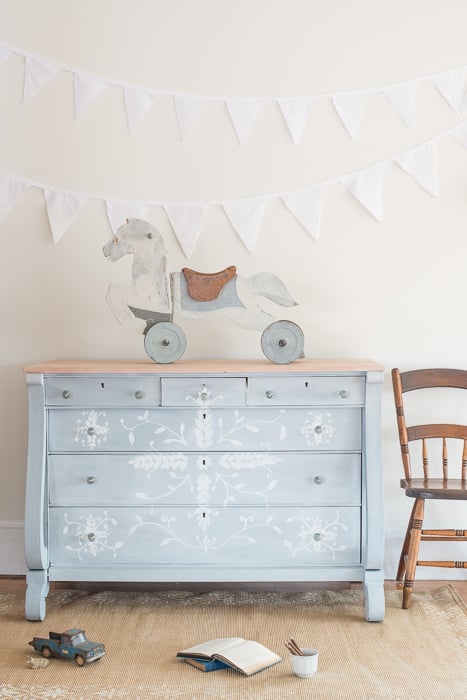 Once I take an overall shot, I’ll usually hold the camera and take some details shots. 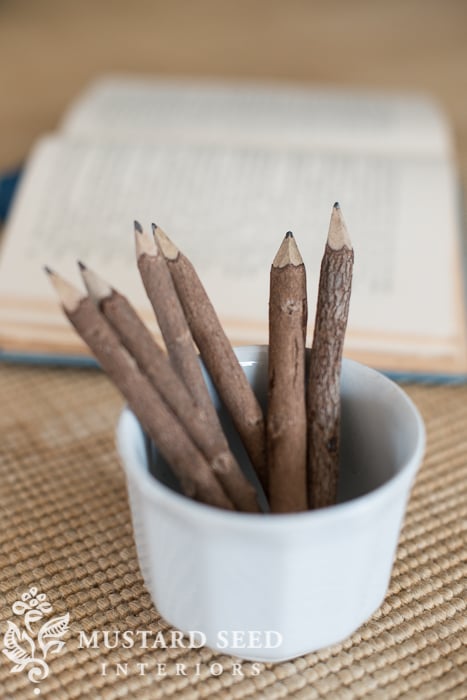 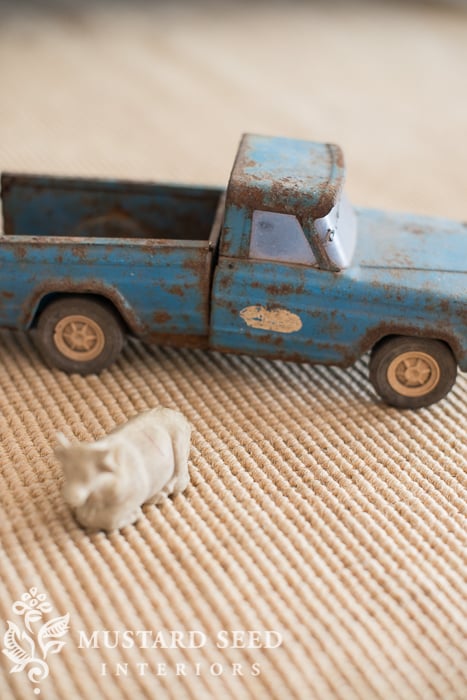 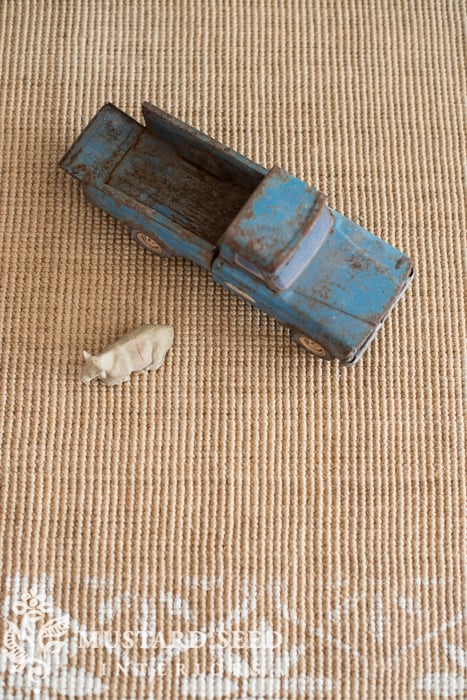 Kriste and I agreed in the last picture that the subject remained the dresser, but there was enough going on around it to “bring it to life.”  Like I said in the beginning, you might see another setup that speaks to you, more.  There isn’t one right choice.  You just have to pick what’s right for your design taste.

This is a lot of information to digest for one post, so I’ll share how we styled the piece as a buffet in another post.  I’ll also include more information on the camera settings.