“Great thoughts go best with common duties. Whatever therefore may be your office regard it as a fragment in an immeasurable ministry of love.”
― Brooke Foss Westcott

I received a new parcel from Julia of Ponder & Purchase.  We initially connected through the antique sketchbooks of G. Herbert Kitchin and, since then, she’s been on the lookout for antique art supplies and other goodies for me.  It’s sort of turned into a Ponder & Purchase Monthly Subscription Box!  It works out great for both of us since she is frequently out shopping to supply her Etsy shop (and selling things directly to me saves her the time of listing the items) and most of the antique and vintage art supplies seem to have congregated in the UK.  Maybe Americans just pitched theirs?  Maybe hobby art wasn’t as big in the late 1800s – early 1900s here?  Either way, she has a knack for finding little antique treasures to outfit my studio – brass drafting tools, palettes, brushes, cartirdge & oil papers, vintage drawing books…  Every box has been like Christmas.

In the most recent box, I received a stack of letters from the Kitchin estate to pair with the sketchbooks.  I’ll circle back to the Kitchins in a minute… 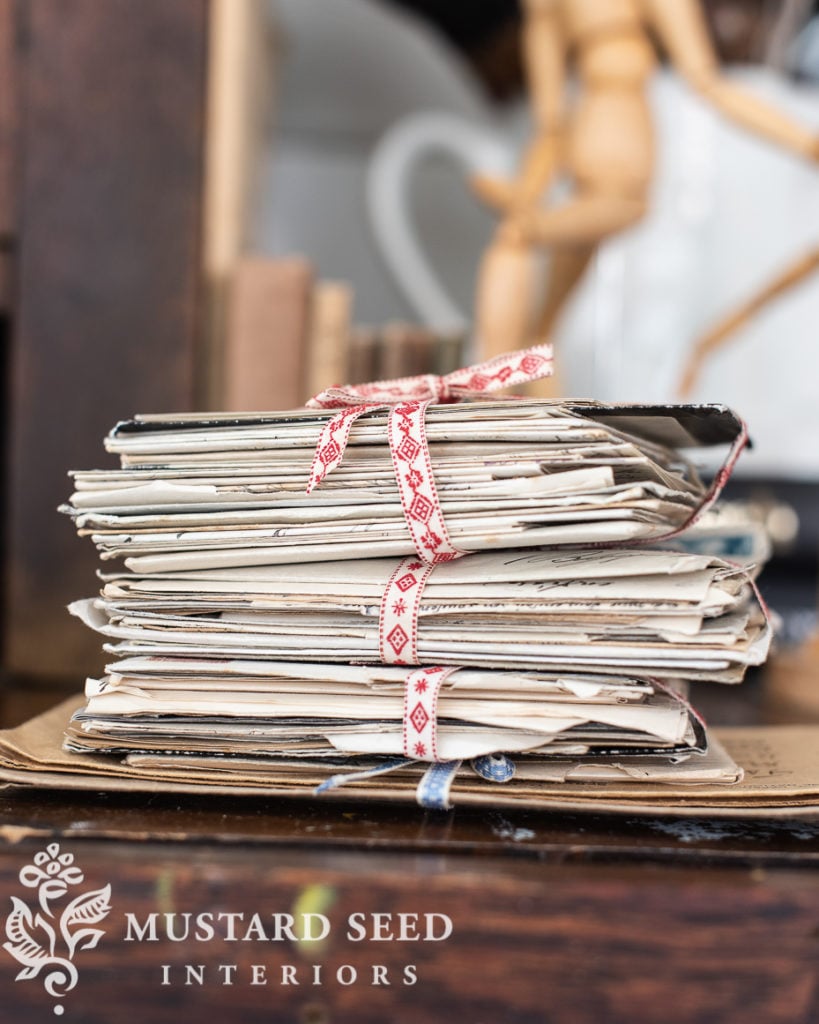 What she also sent was a brass protractor, a few vintage (empty) sketchbooks and oil paper pads, some vintage and used art books, and an 1847 sketchbook that is about 1/3 full.  She thought the paper was lovely and that I would enjoy filling the empty pages.  I agreed and we added it to my box. 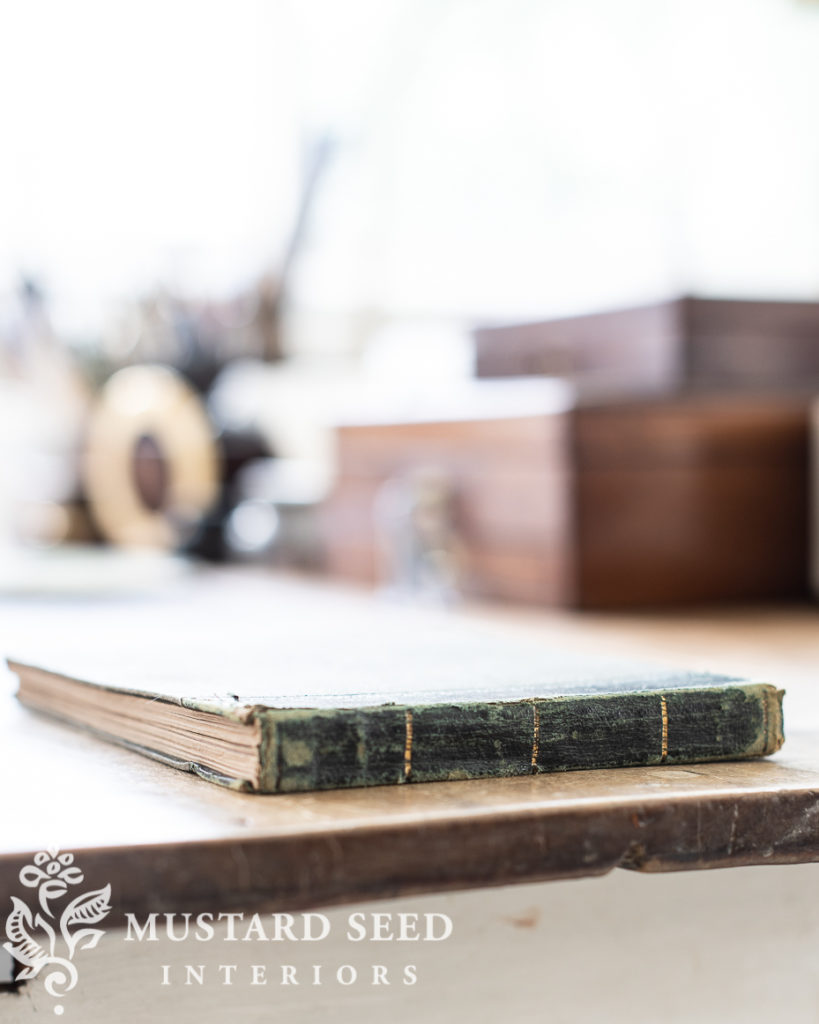 And, this sketchbook is so beautiful.  It has green leather binding with a gold detail.  There is a button on the back with the remnants of a black ribbon, to mark the pages, I’m assuming.  It also had a leather sleeve for a pencil. 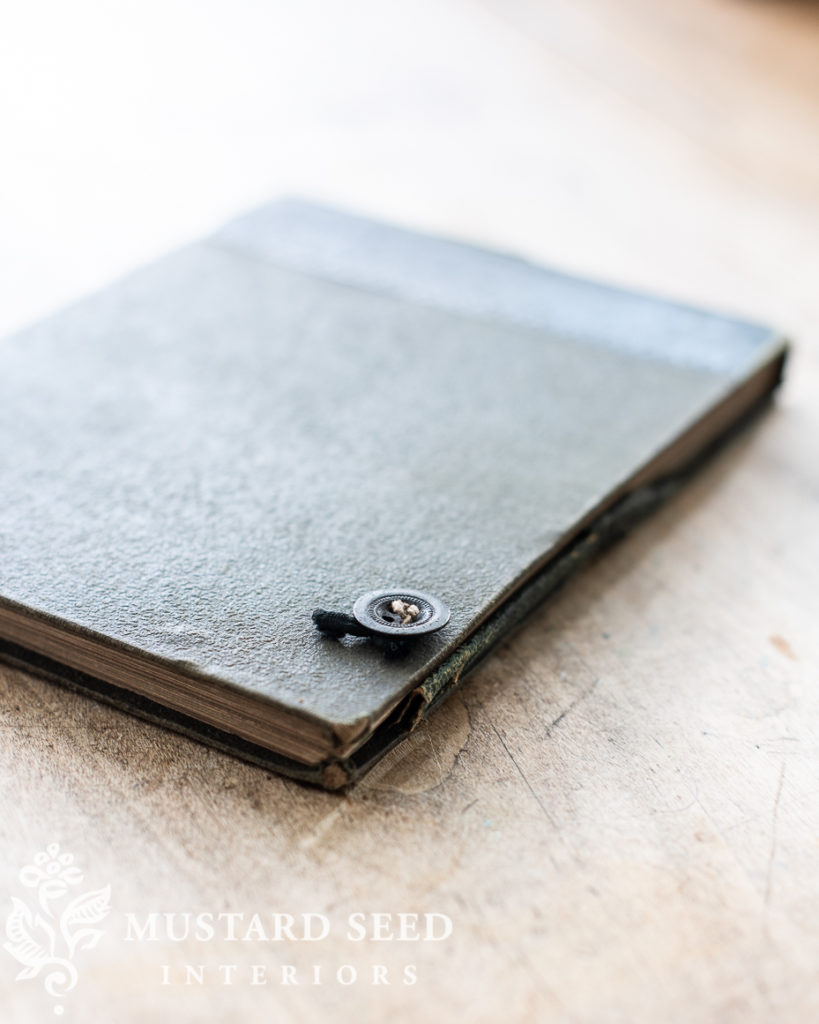 The paper is special, too.  Some pages are cream and some are a pale blue or green.  I have never seen a sketchbook like that before, but I have seen pictures of antique sketches in some of my art books on blue and green paper, probably from a contemporary sketchbook.

Julia’s assessment of the sketches were, “They are nice, but not on the level of Our Man.”  Our Man is George Herbert Kitchin, in case you missed that.  We’ve both sort of adopted him as a little project.   The sketches are quite lovely, though.  Very delicate and soft, but the overall drafting is good. 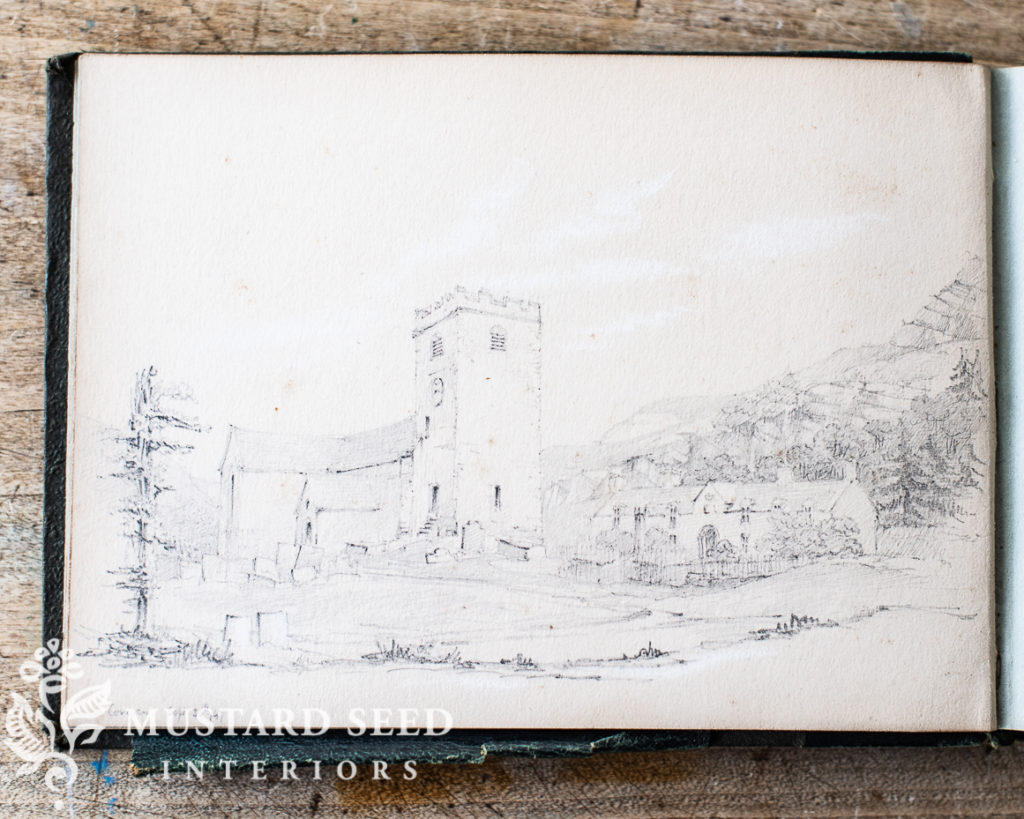 Most of the drawings are of buildings, but the renderer wrote so tiny and light that it’s hard to identify the buildings.  I’ll have to do some research to see if I can make out the writing and find matches. 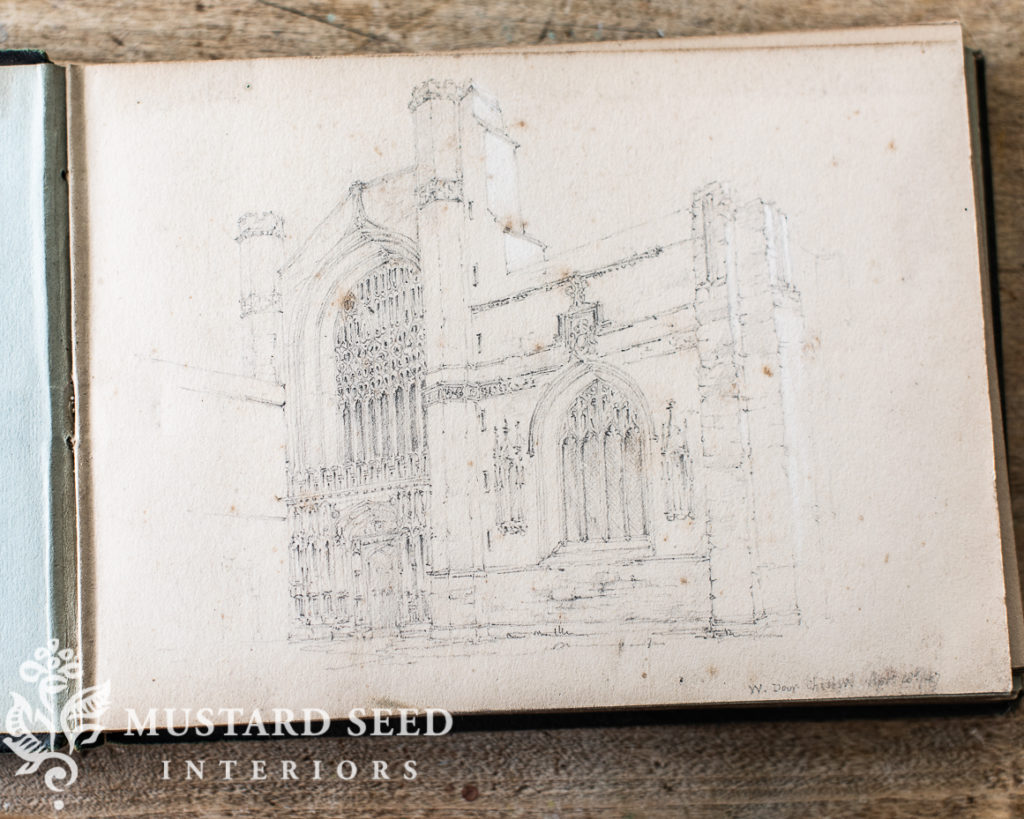 In addition to architecture, there are also sketches of nature…  (See the green paper on the opposing page?) 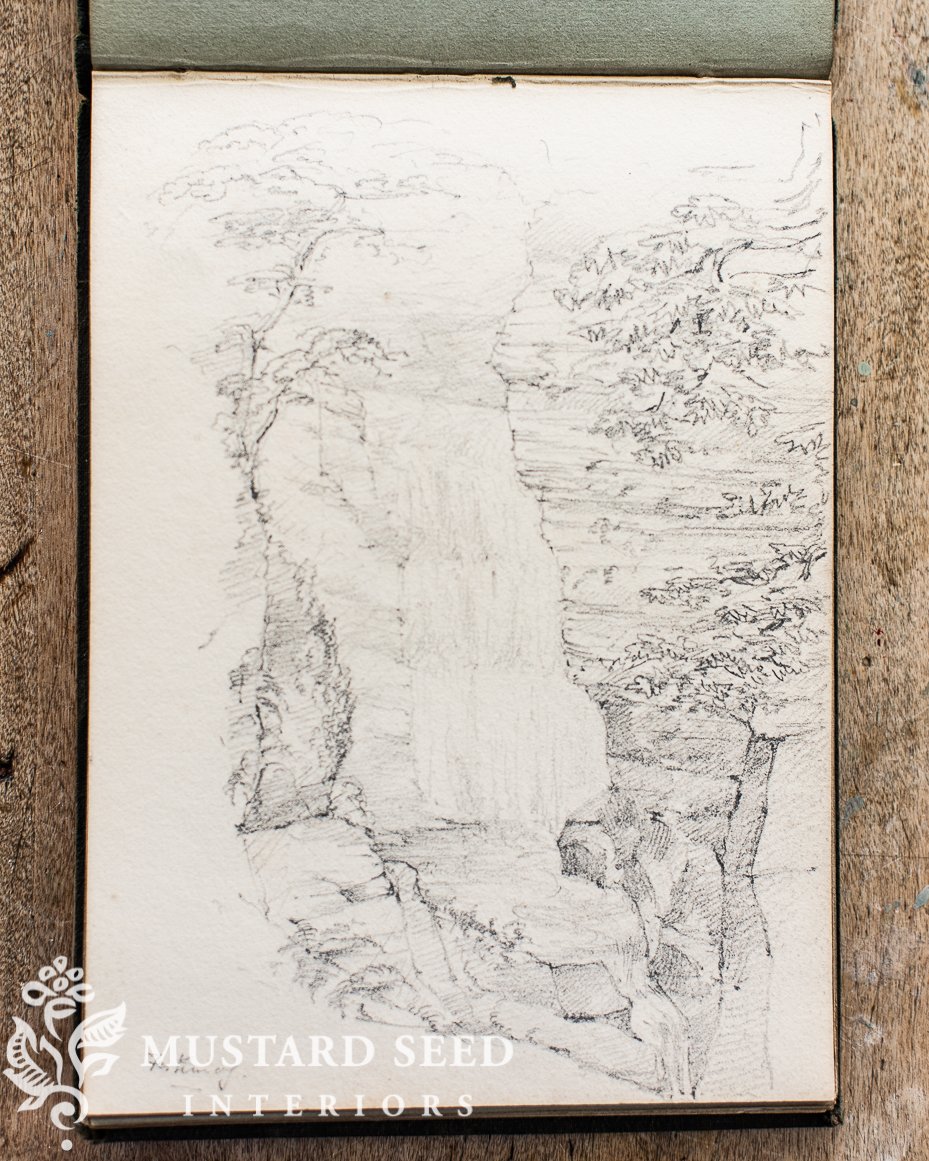 Before I started adding my own artwork to the blank pages, I thought I would try to find the original artist.  I asked on my Instagram Stories if anyone could decifer the name.  It’s plain to me now that I know it, but I couldn’t make it out initially.  Several people suggested Brooke and I could immediately see they were right.  Yes!  Brooke.  F was most likely the middled initial and I thought the last name was Westcroft.  It was enough to start a search.  It was handy that I knew this inidividual was at Trinity College, Cambridge in 1847, so I prepared for some late night searching through the Campbridge class rolls. 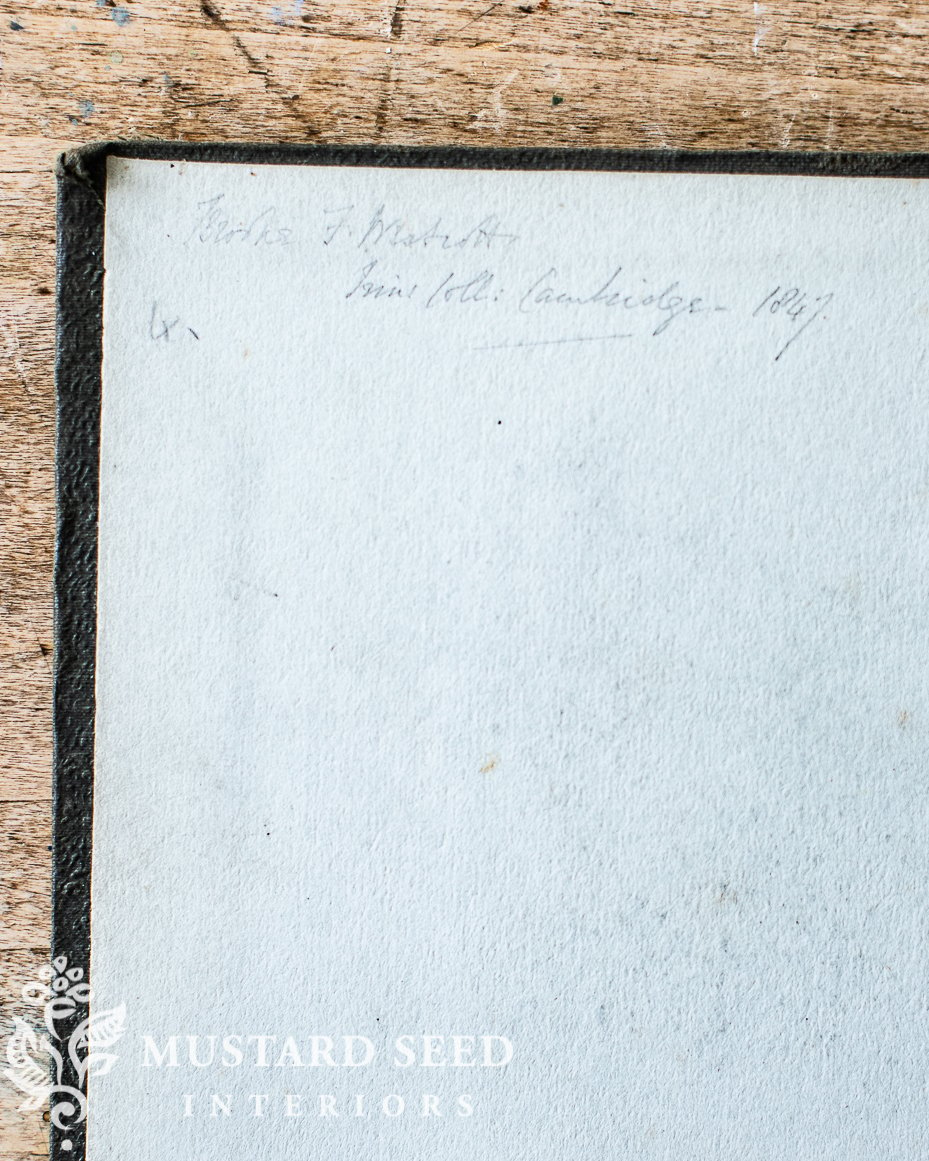 Well, with one Google search of “Brooke F. Westcroft Cambridge”, I came across Brooke Foss Westcott.  As I started reading the biography on the Cambridge website, I realized this wasn’t just an alumni bio.  He was the Bishop of Durham, a canon of Westminster, he co-edited The New Testament in Original Greek, and wrote numerous books on theology.  He is buried in Auckland Castle chapel. 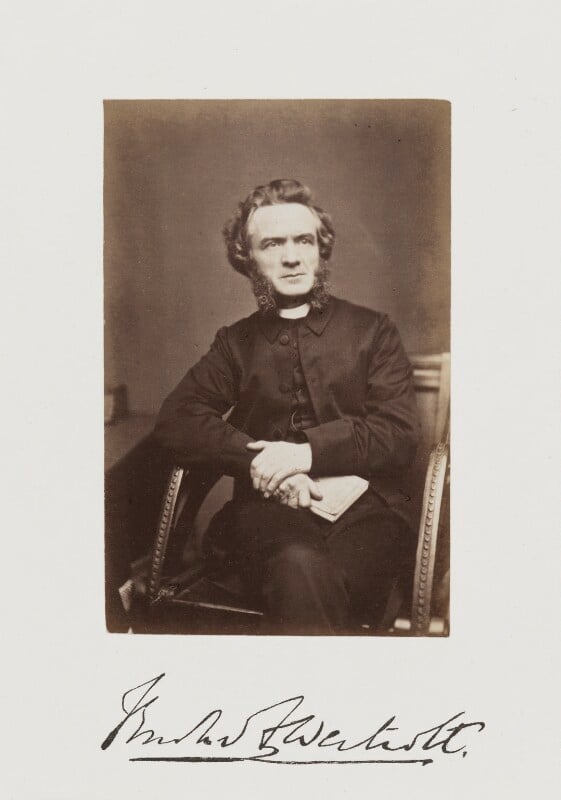 A building at Cambridge still bears his name – This is Westcott House at Cambridge, named after Brooke Foss Westcott, Our Other Man now. 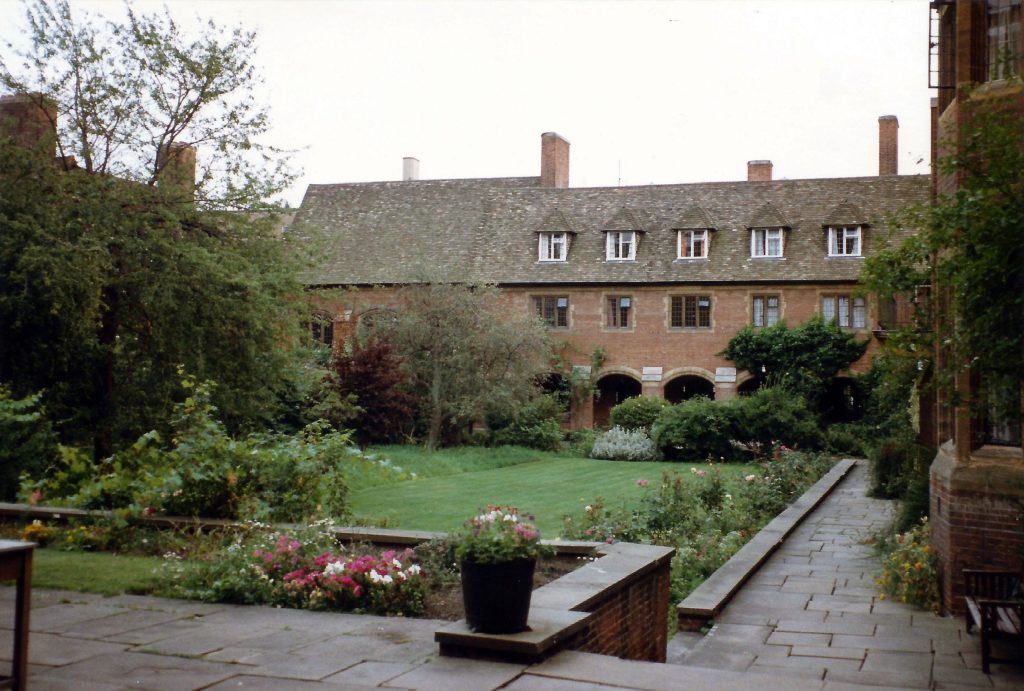 I have to admit I was, to use a British term, gobsmacked.  I actually looked back at the signature repeatedly to check and double-check.  I mean, this guy has a Wikipedia page.  No. 1 – I didn’t expect the research to be so easy and No. 2 – I didn’t expect this to be the sketchbook of another prominent person.  But, the dates lined up and even the signature was a perfect match.  This is the sketchbook of 22-year-old Brooke Foss Westcott.

So, my plan to add my own artwork to the book has now changed.  This book needs to also be scanned and researched further.  A couple of letters from Brooke Westcott are listed on eBay for $125-325, so I think this sketchbook, that Julia found at the equivelent of a flea market for 30£, is probably quite valuable.  I don’t have plans to sell it, but I do see it as a responsibility and a priveledge to research it, preserve it, and share it.  I would be more likely to donate it to England’s National Archives or to Cambridge than to sell it, but we’ll see!

I was able to buy a 1903 copy of The Life & Letters of Brooke Foss Westcott , so I’m looking forward to reading that.  I also started a Westcott family tree, so I could learn a bit more about his children and grandchildren.  The interesting thing is Brooke was likely to have known Rev. George William Kitchin, Herbert’s father.  He was the Dean of Durham from 1894 – 1912 and Brooke Foss Westcott was Bishop of Durham from 1890 – 1901.  How crazy is that??  In addition, George Kitchin had a son named Brook and Brooke Westcott had a son named George Herbert.  I am excited to do more research to see how these two families intersect.

So, onto the Kitchins.  Julia, who is a magnet for things that came out of the Kitchin estate, has sent me all sorts of paperwork, family letters, and albums to include with the sketchbooks.  We both feel like all of these things belong together so a complete story can be told.  I have a few projects in the works for the sketchbooks, but the big project I have planned is a book of Herbert’s sketches as well as family letters, photos, and albums.  Since I am not a historian, the book will be purely from my perspective, as someone who has been touched and changed by these sketchbooks.  I am hoping to plan a trip to the UK in the next couple of years, so I can photograph, sketch, and do more research.  At this point, this is all purely a pet project and who knows where it will lead. 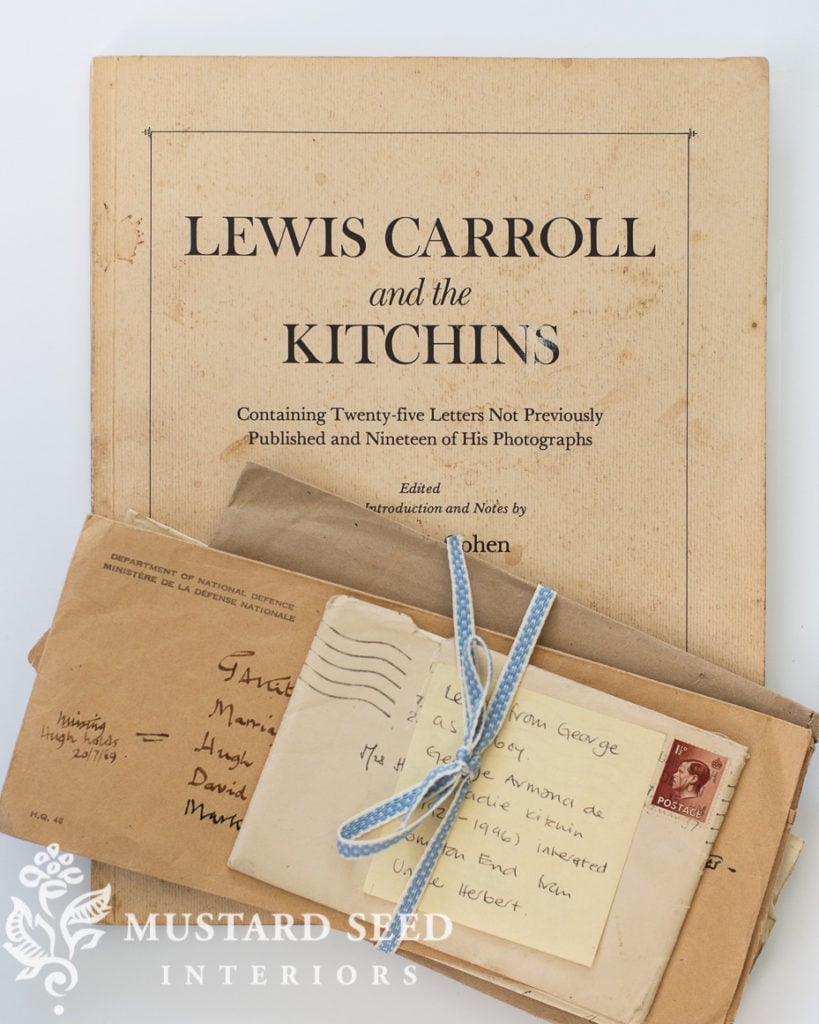 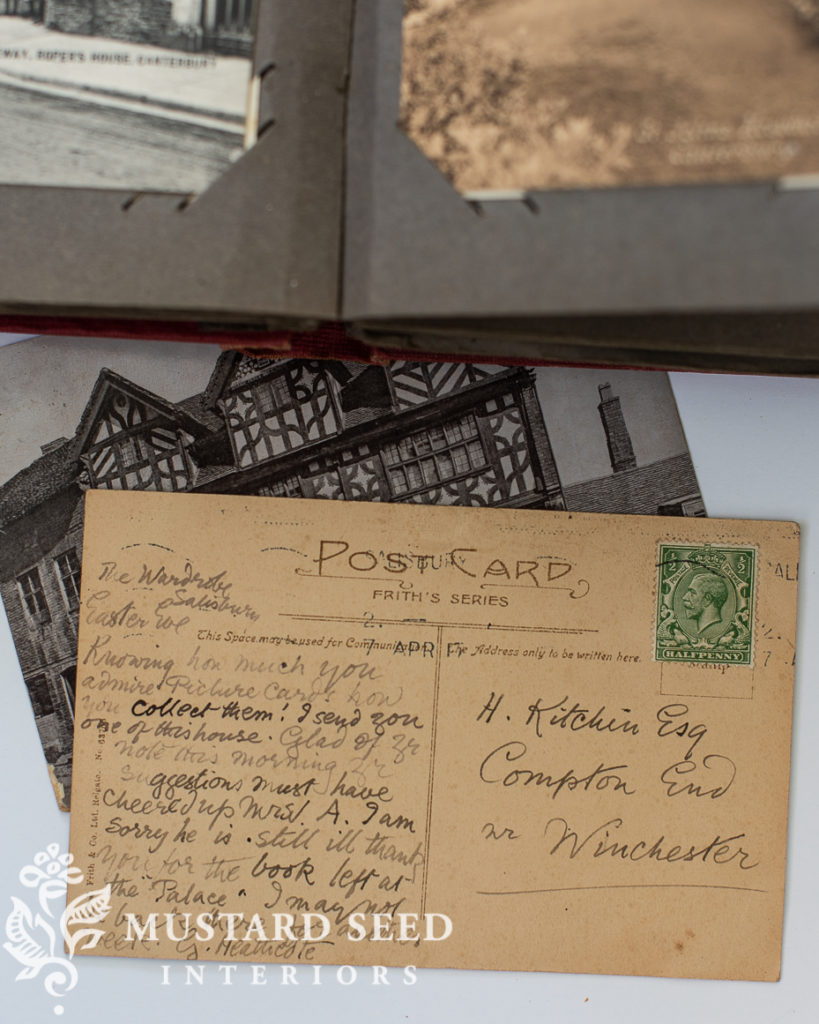 One of the albums is filled with gorgeous sepia-toned postcards and I’ve already been able to match up some of the places Herbert sketched with the postcards. 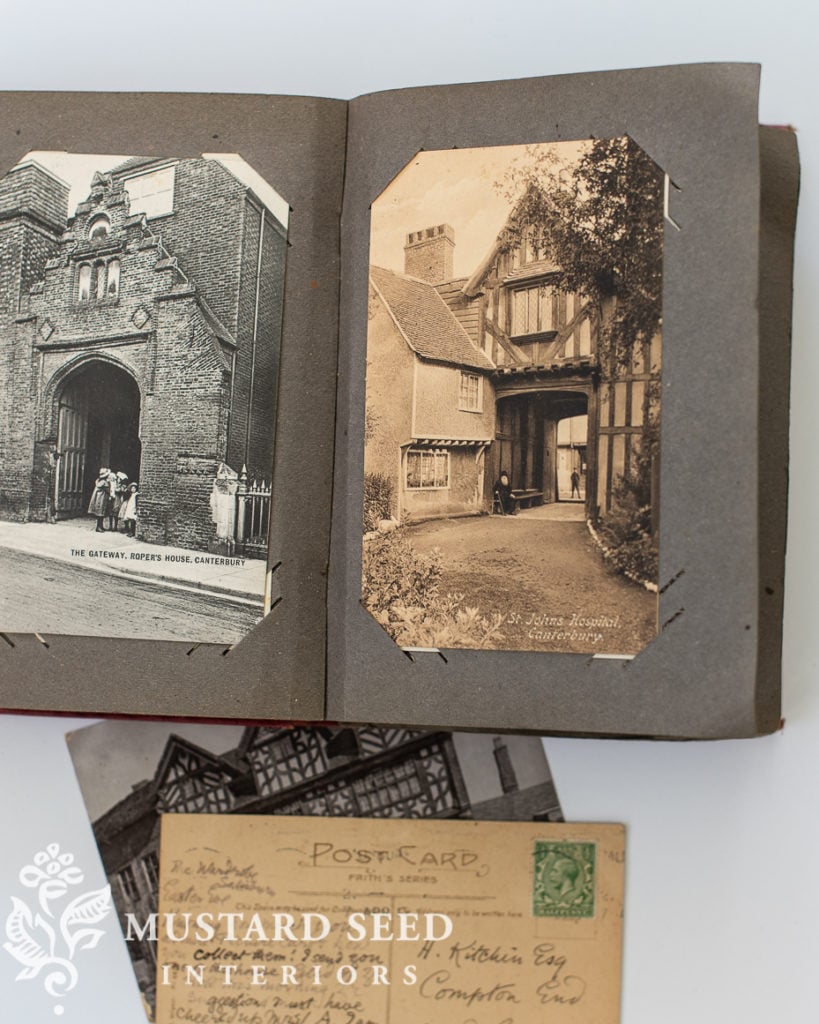 Here is Herbert’s sketch of St John’s Hospital gate in Canterbury, photographed in the postcard above… 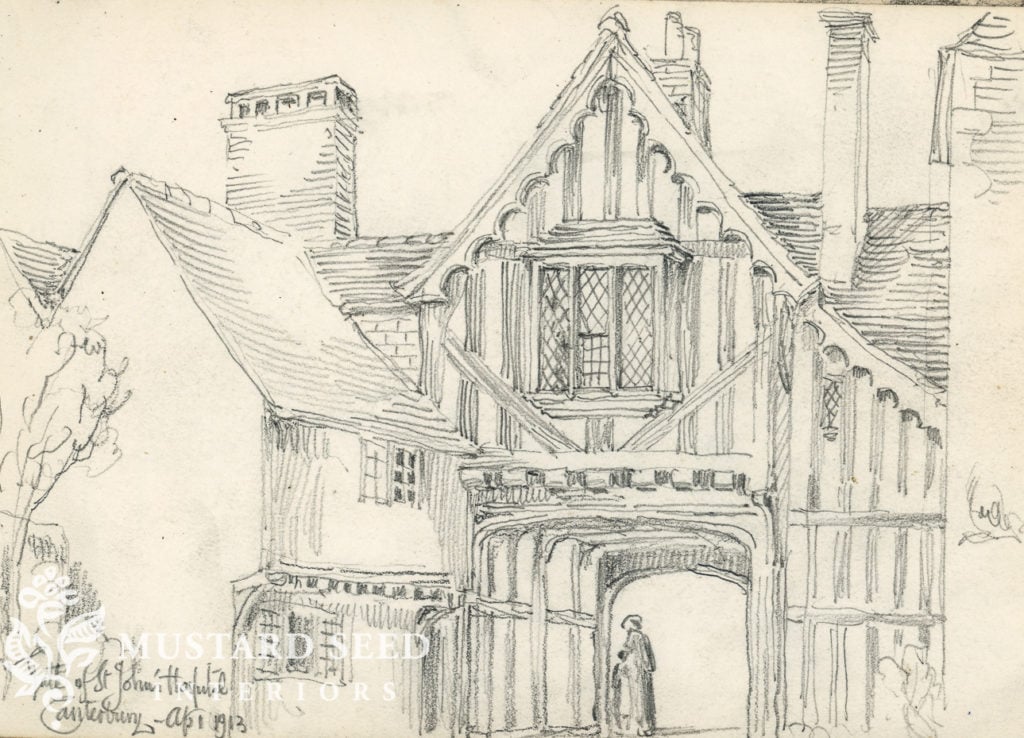 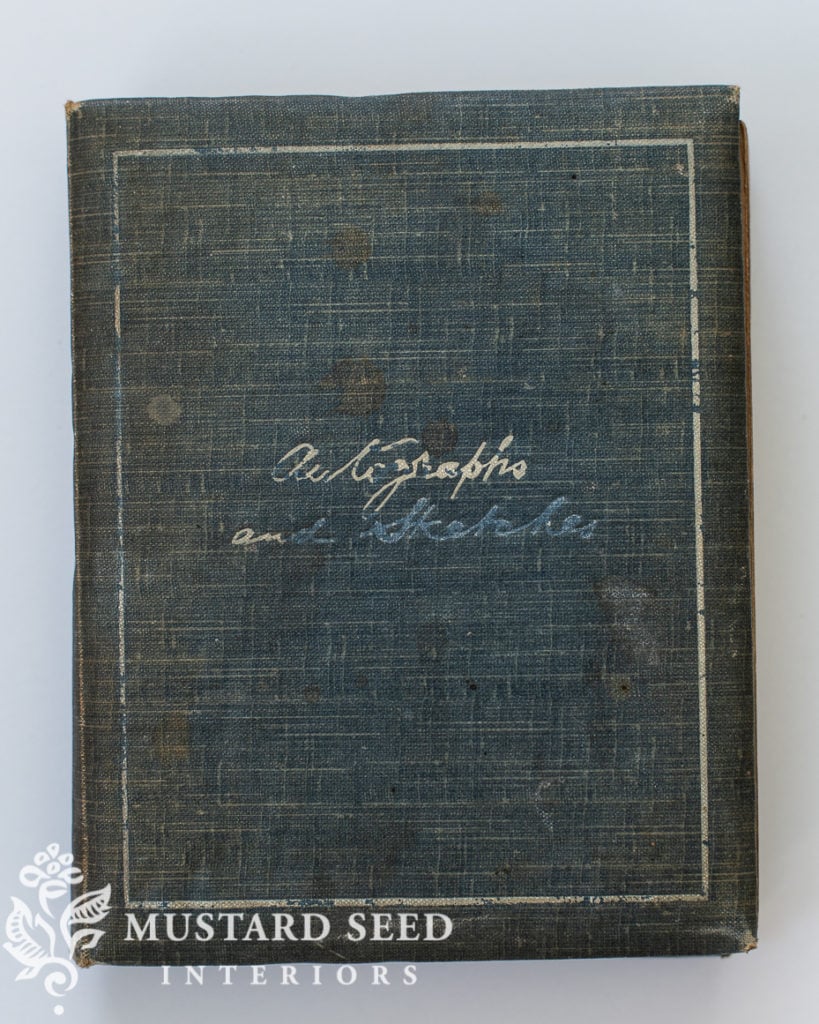 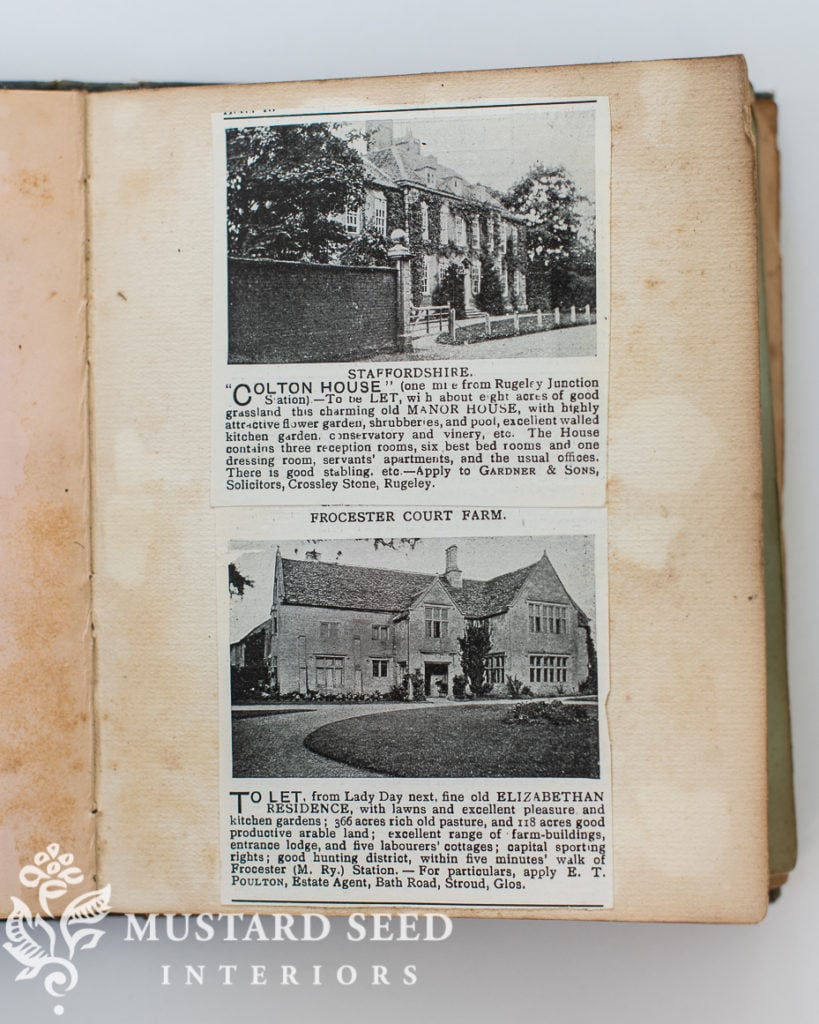 I think it will be fun to sketch some of these, but I’ve also just enjoyed reading the listings.  I wish I could beam back to the time of some of those listings and snap up an old English house.

One of the most special finds is a family photo album… 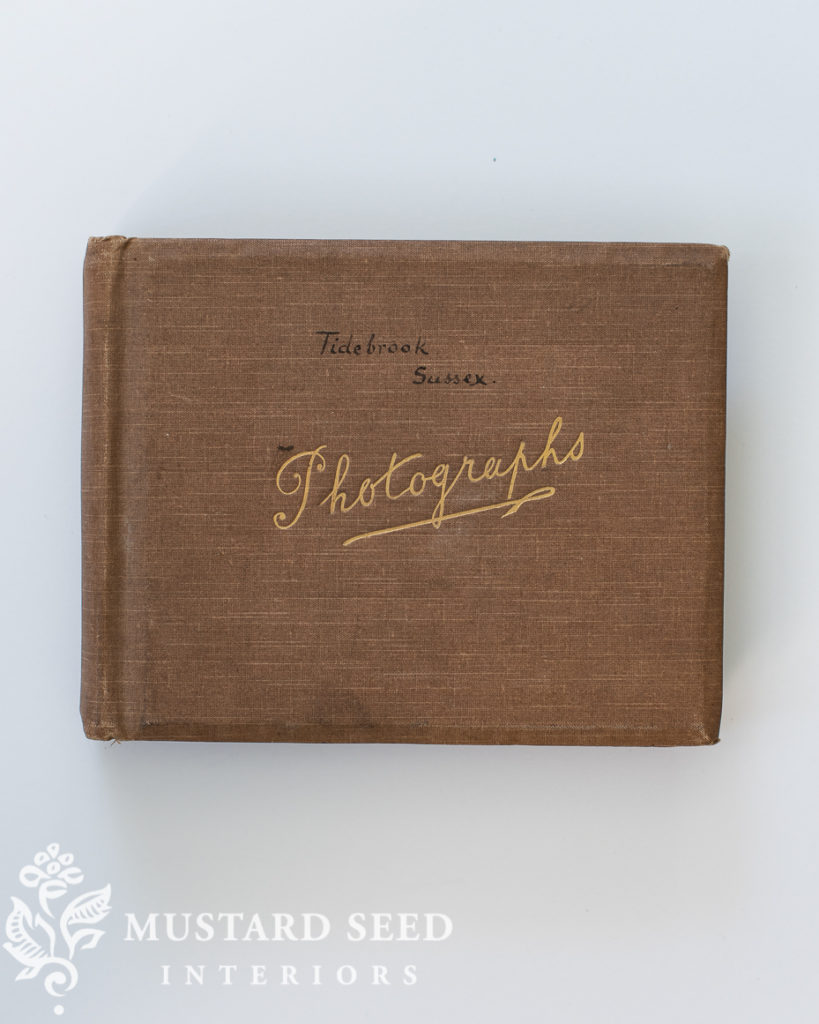 Many of the photos have fallen out, there are some of the family home, presumably renovated by George Herbert, who was an architect. 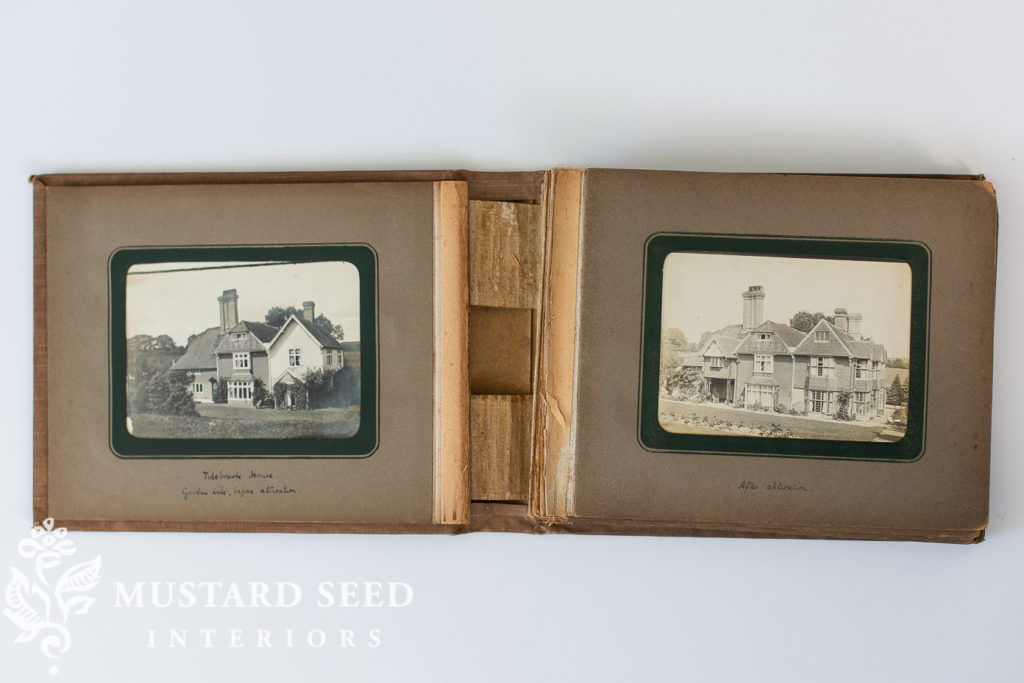 But there are some sweet family photos as well.  I’ve been working on a Kitchin family tree in Ancestry.com, so I can try to identify people in the photos and those mentioned in the letters.  I’ve been able to find some of them, but not all.  It’s possible they are neighbors, friends, maybe cousins.  In Ancestry.com, it’s easier to work up a tree and I’m trying to work laterally and down, which seems to be trickier.  I also hit deadends when I get into people who are still alive and their profiles are private. 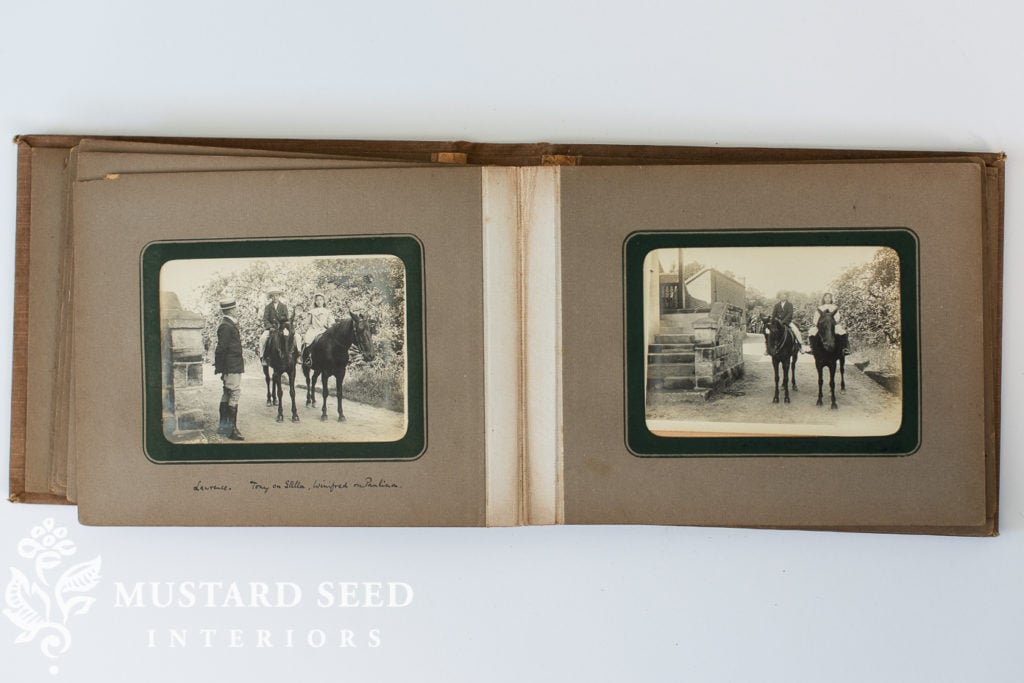 And, there are the bundles of letters.  They are wrapped up just like the little gifts that they are.  I haven’t had time to read them all, but I randomly pulled one out to read a couple of days ago. 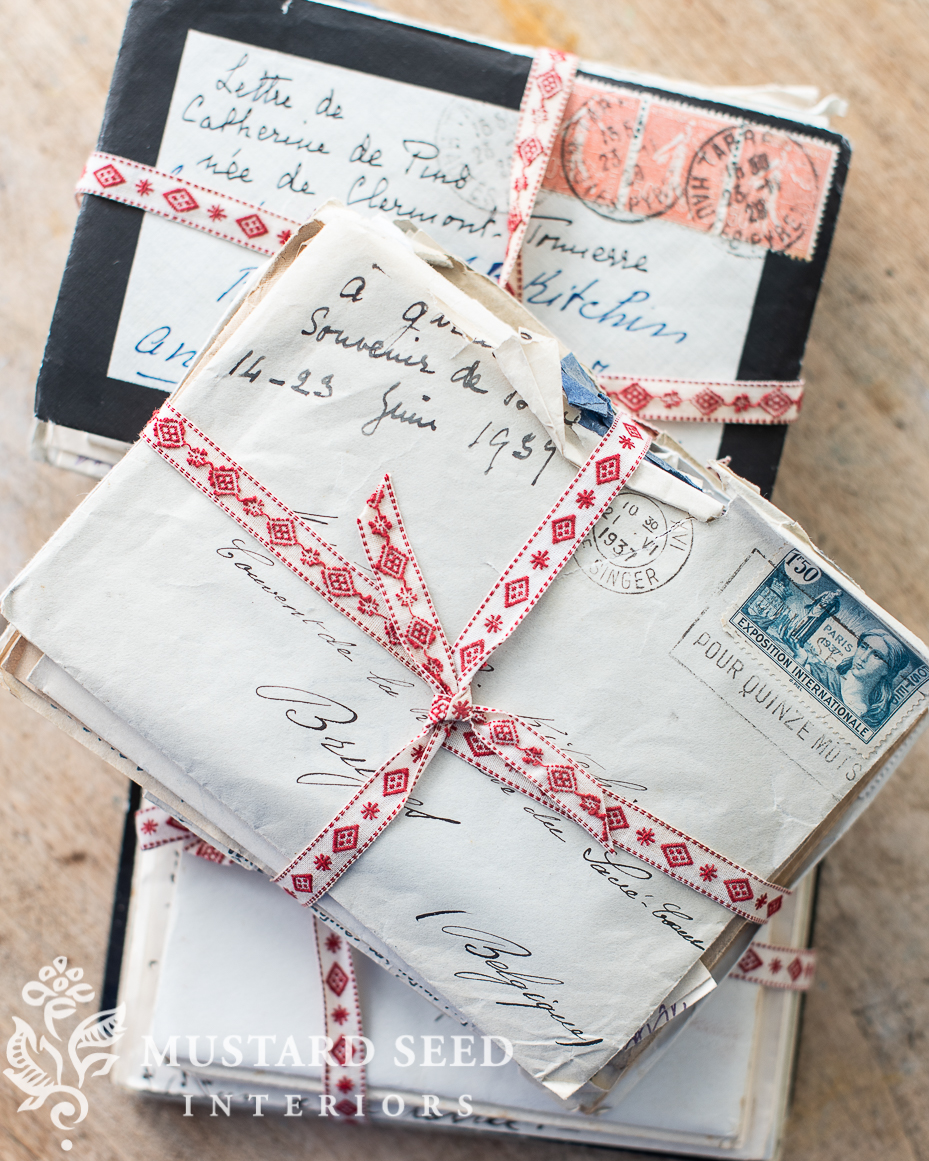 It’s a letter from Hugh Kitchin (Herbert’s brother) to a woman named Daisy (I haven’t been able to find her in the family tree.)  It was written in November 1944 and a note said it was written 2 months before Hugh died, but based on the records I found, that’s a few months off.  The letter itself, though is beautiful. 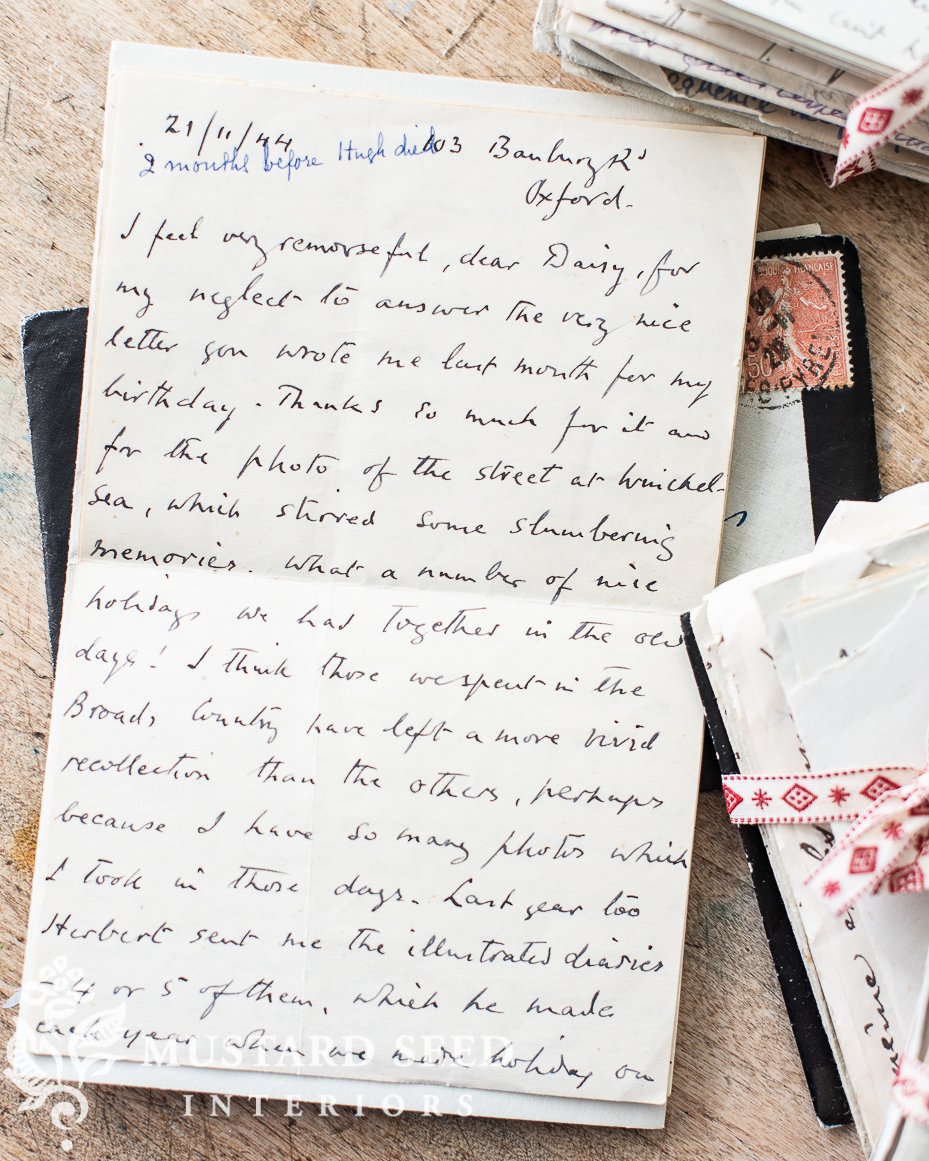 I was particularly interested in an excerpt that mentions the sketchbooks.  “Last year too Herbert sent me the illustrated diaries – 4 or 5 of them, which he made each year when we made holiday on the Broads.  They are full of lovely little pictures and details of our days, and brought back to mind most-vividly the happy carefree time we three brothers spent together.  As one grows older one’s thoughts go more & more to the past and it becomes more & more difficult to view with a tolerant eye the extreme restlessness of the modern generation which can’t bear to sit quietly at home.  It craves constant excitement.”  When I first read that, unexplainable tears welled up in my eyes.

And this letter was written in 1944, during WWII.  It makes me wonder what Hugh would think of Gen X or Millenials. 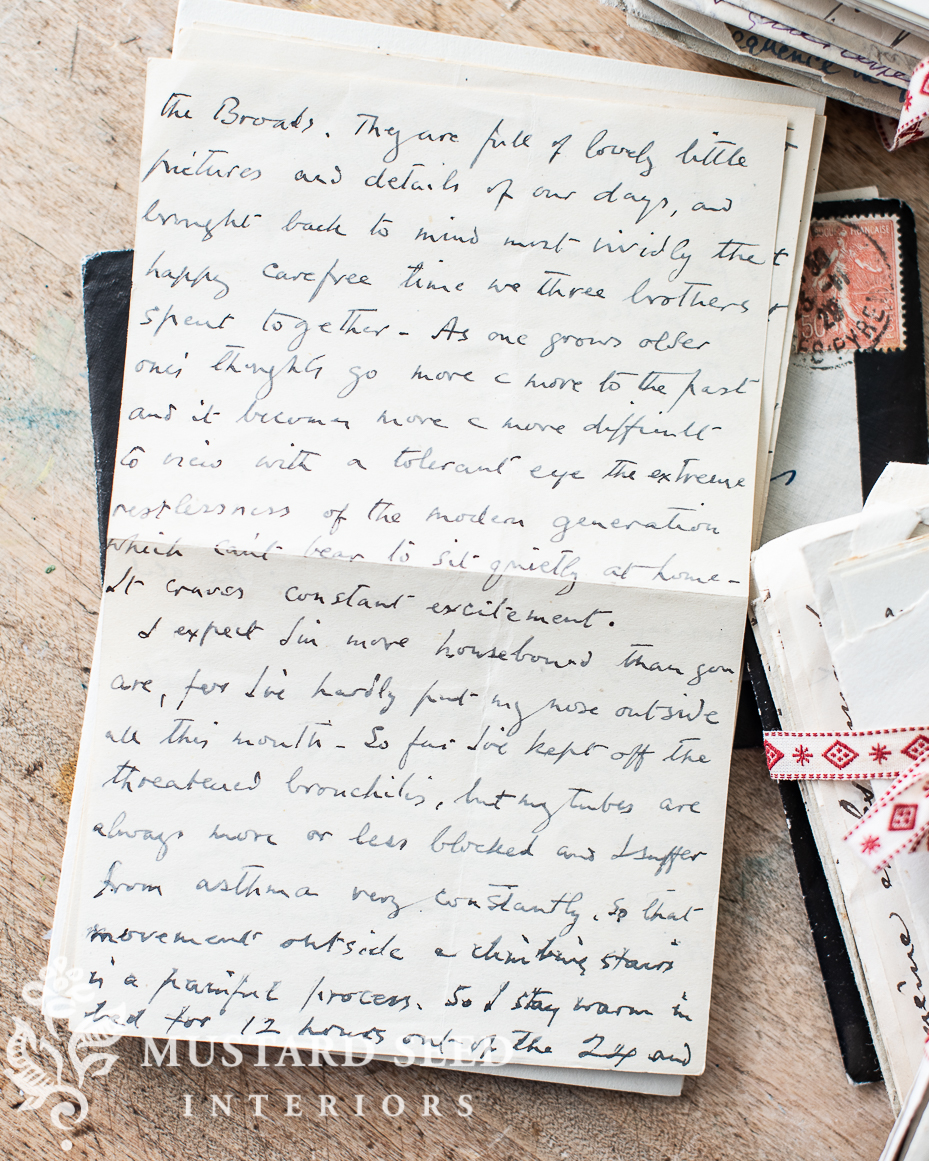 As I shared at the beginning of this post, Brooke Foss Westcott said, “Great thoughts go best with common duties. Whatever therefore may be your office regard it as a fragment in an immeasurable ministry of love.”

One of my offices, quite accidentally, is now a hobby historian.  Perhaps a keeper of old things, obscure stories, and misplaced art is a better title.  Whatever the title of the office, I view it as an honor and a labor of love.  Or, as Our Other Man put it more eloquently, “as a fragment in an immeasurable ministry of love.”