I bet you thought I would finish the post title with “‘…til it’s gone”, but I’m not.  While that’s the way the saying goes, I’m going to change it up a bit.  Here’s my version, which is a little less catchy and will never be a song lyric…

You don’t know what you’ve got until you’ve gone through it all.

There is an assumption that we know about everything we have in our homes (other than critters/pests), but I don’t know if that’s 100% true, especially if you’ve acquired items from a family member or an estate or if you tend to box things up “for later.”  And who knows what your spouse and children might be bringing home!  I think a part of having a house full of favorites is truly knowing everything you have.  That means you don’t have too much stuff stored and what is stored in stored in an organized, thoughtful way.  I’m getting there…

As I have been working through my house with a fine-toothed comb this year, I realized I had some things stored away that were surprises to me.  Some things I forgot about entirely and there were a few things in bins that I never knew I had.  With some of those pieces, I questioned if I even needed it if I forgot I had it.  In many cases, that answer has been no and I’ve made a lot of runs to the thrift store to drop things off.  But in some cases, I found little treasures.

When I helped clean out my Opa’s attic a few years ago, the job was overwhelming and we only had a couple of days to work through a pretty large area.  We rented a dumpster and had to make quick decisions about what to keep and what to pitch.  Sadly, many of the boxes were eaten away and infested with bugs, so a lot had to go in the dumpster.  I kept the paperwork, albums, and photos that seemed most significant to the family, though.  There were a few Ziplock bags that had the word “keep” scrawled on them in black Sharpie, so I did.  If someone thought they needed to be labeled, they were probably important.  When I came across those bags a few weeks ago, I realized I’ve had those bags for several years and never opened them.

Inside were postcards, mostly addressed to my Oma when she was a girl, but there were ones that were addressed to her siblings, parents, and even neighbors.  I learned from talking to my great-aunt, my Oma’s younger sister, that my Oma collected postcards.  Friends and relatives would give their old postcards to her or mail them to her from places they visited. 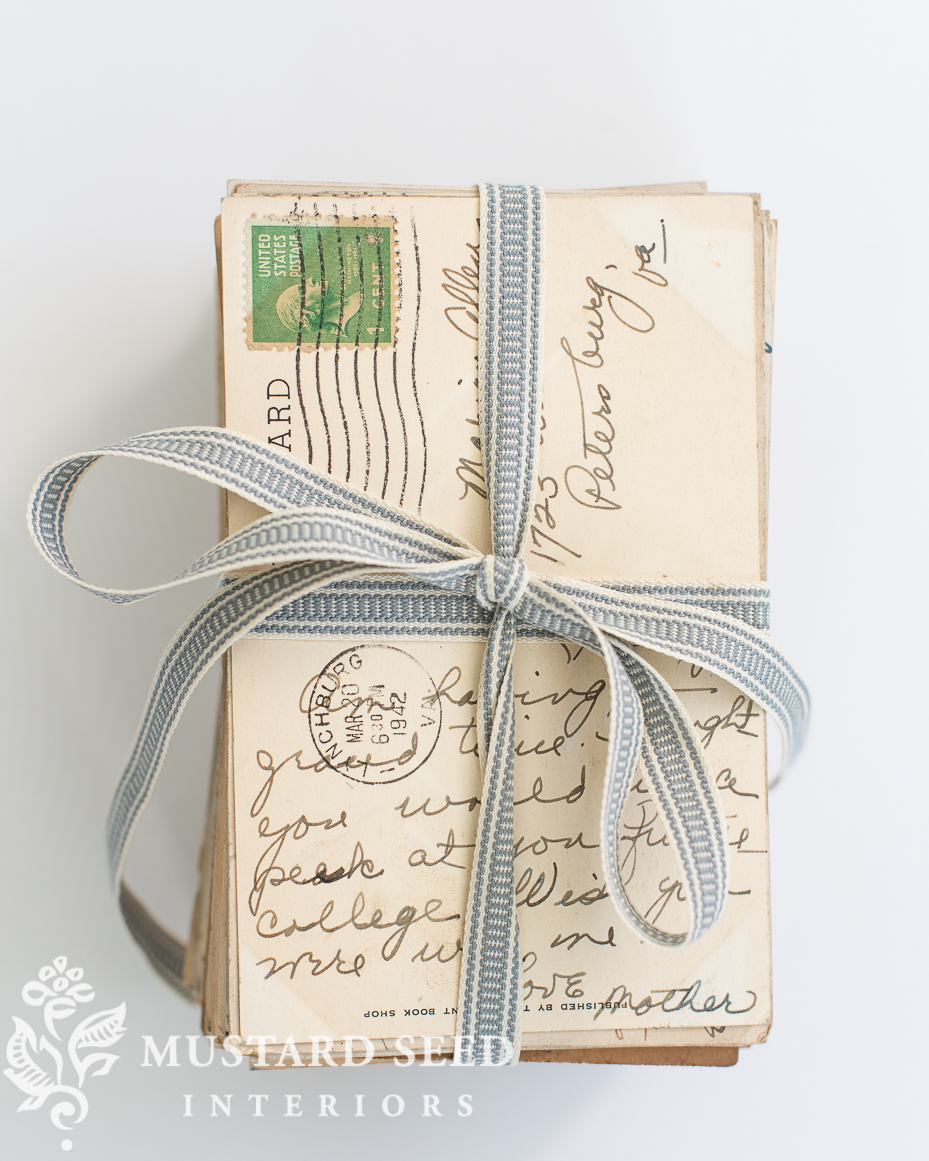 My Oma was a serious collector of a lot of things and her postcard collection numbered in the thousands.  I mean, there were stacks and stacks.  Years ago, I sorted out all of the blank ones and sold them off in lots.  There were just too many to keep.  But these “keep bags” had ones that were family correspondence.  I had a great time looking through them and even sent some scans of ones addressed to my great-aunt and great-uncle so they could read their mail from so many years ago. 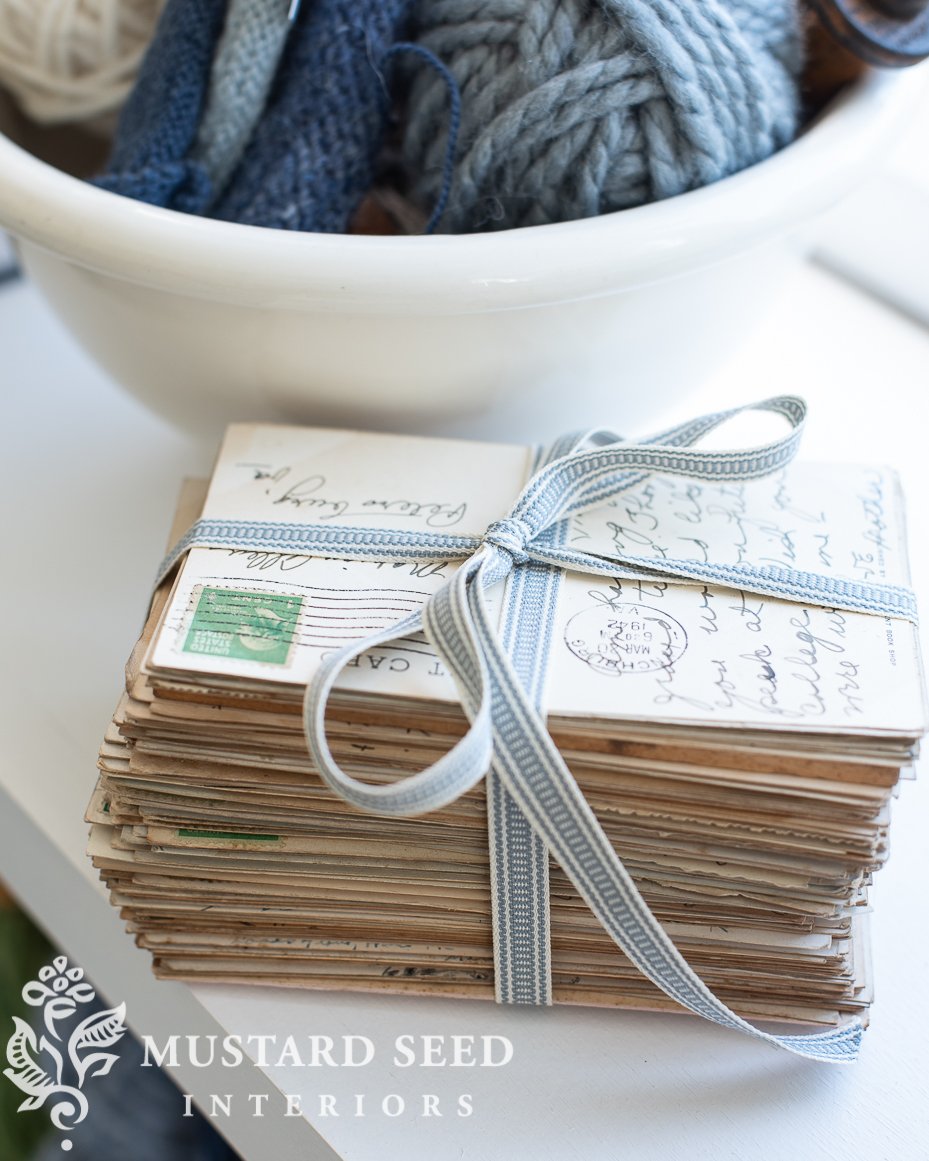 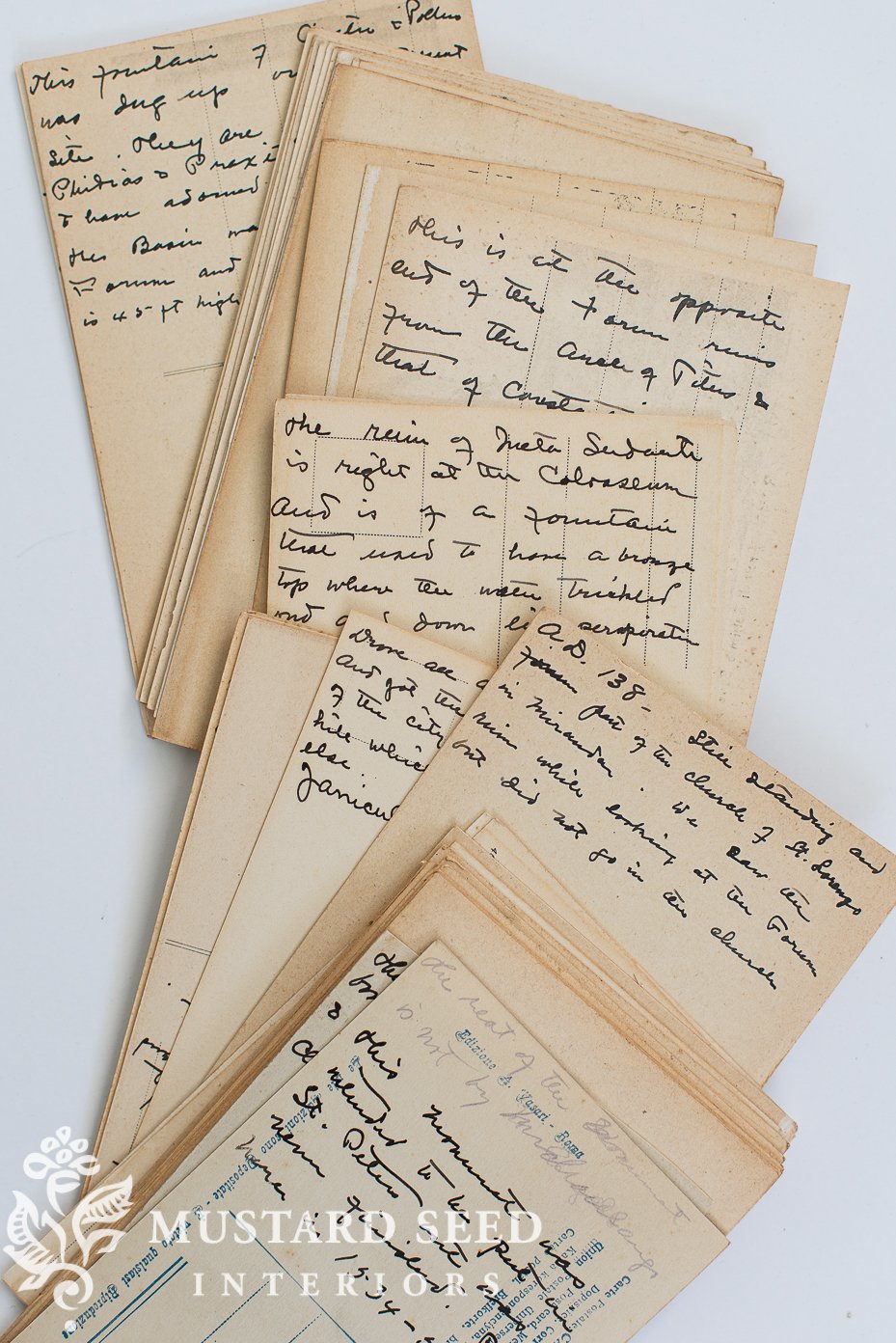 The postcards are all beautiful sepia-toned photos with graceful handwriting on the back.  I am just so taken with them! 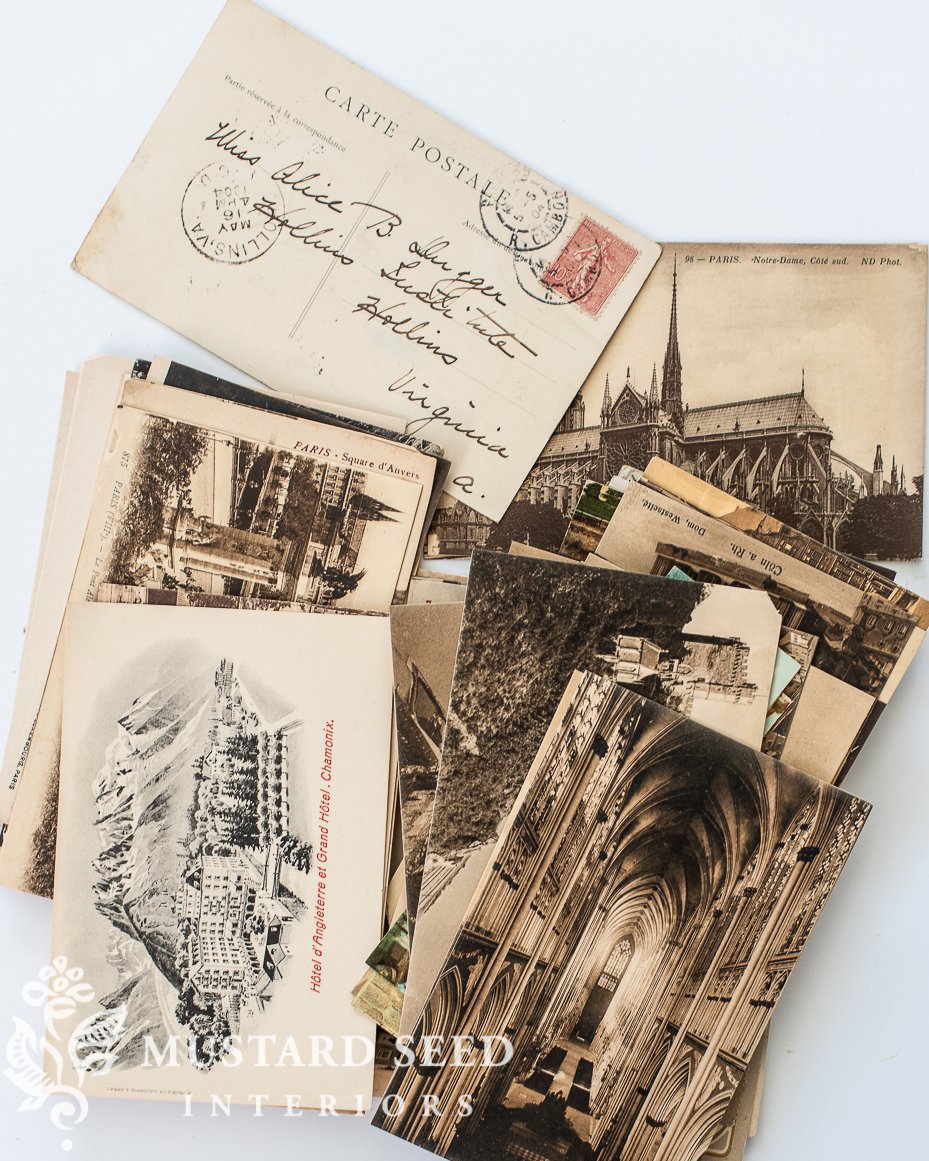 Included in the grouping were programs, menus, and a passenger list for a Holland American Line cruise from 1911.  It definitely has Titanic vibes, as it sailed just seven months before Titanic sank. 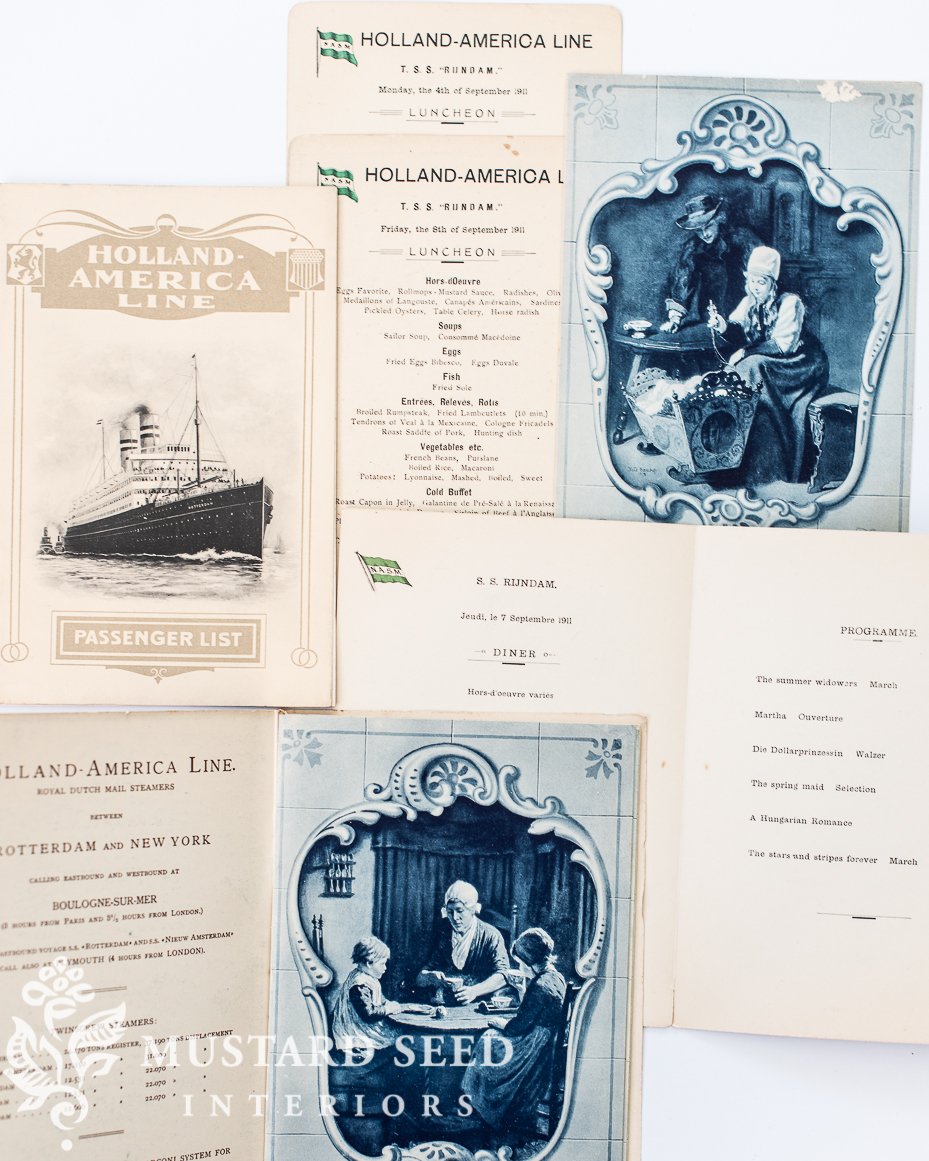 The menus are so interesting and the cover art is beautiful! 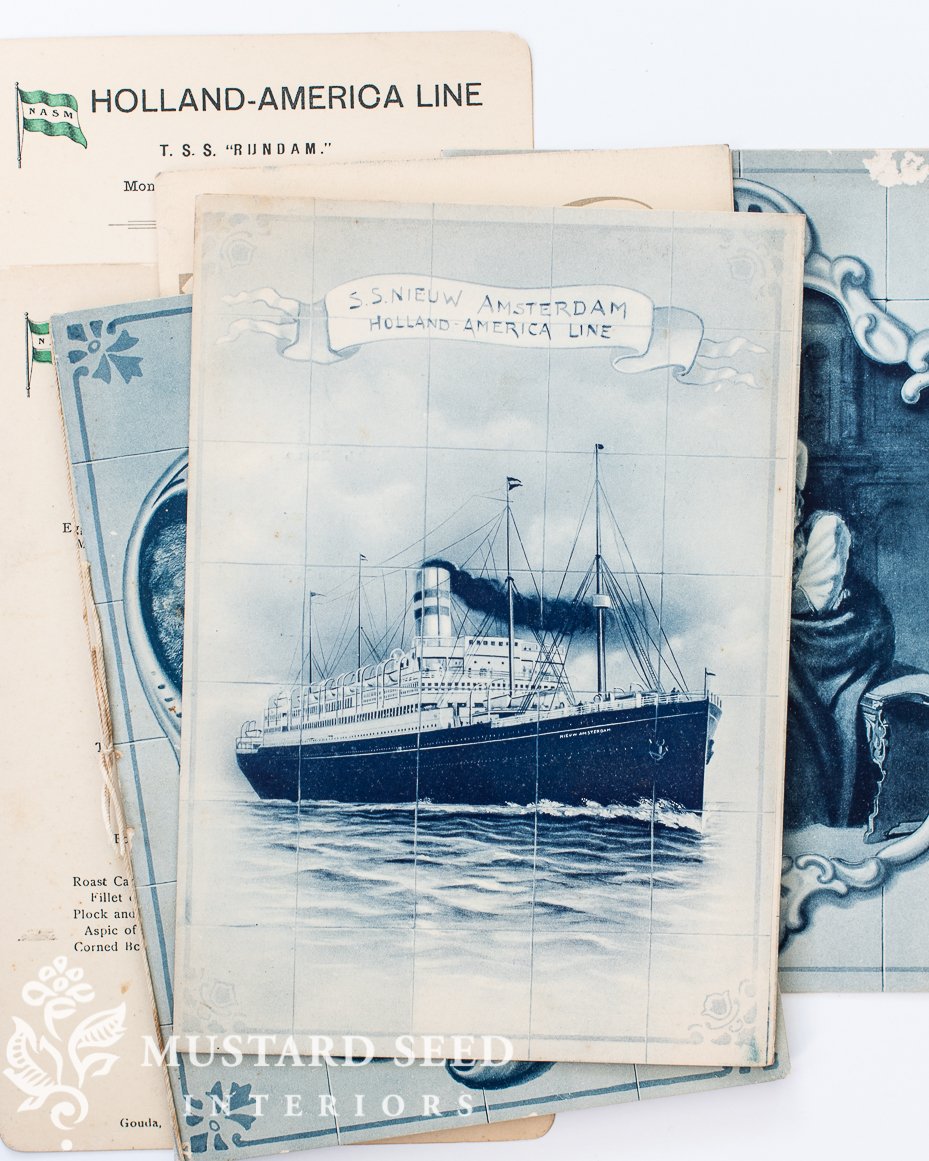 And, there is our lady on the first-class passenger list – Miss Alice B. Duggar. 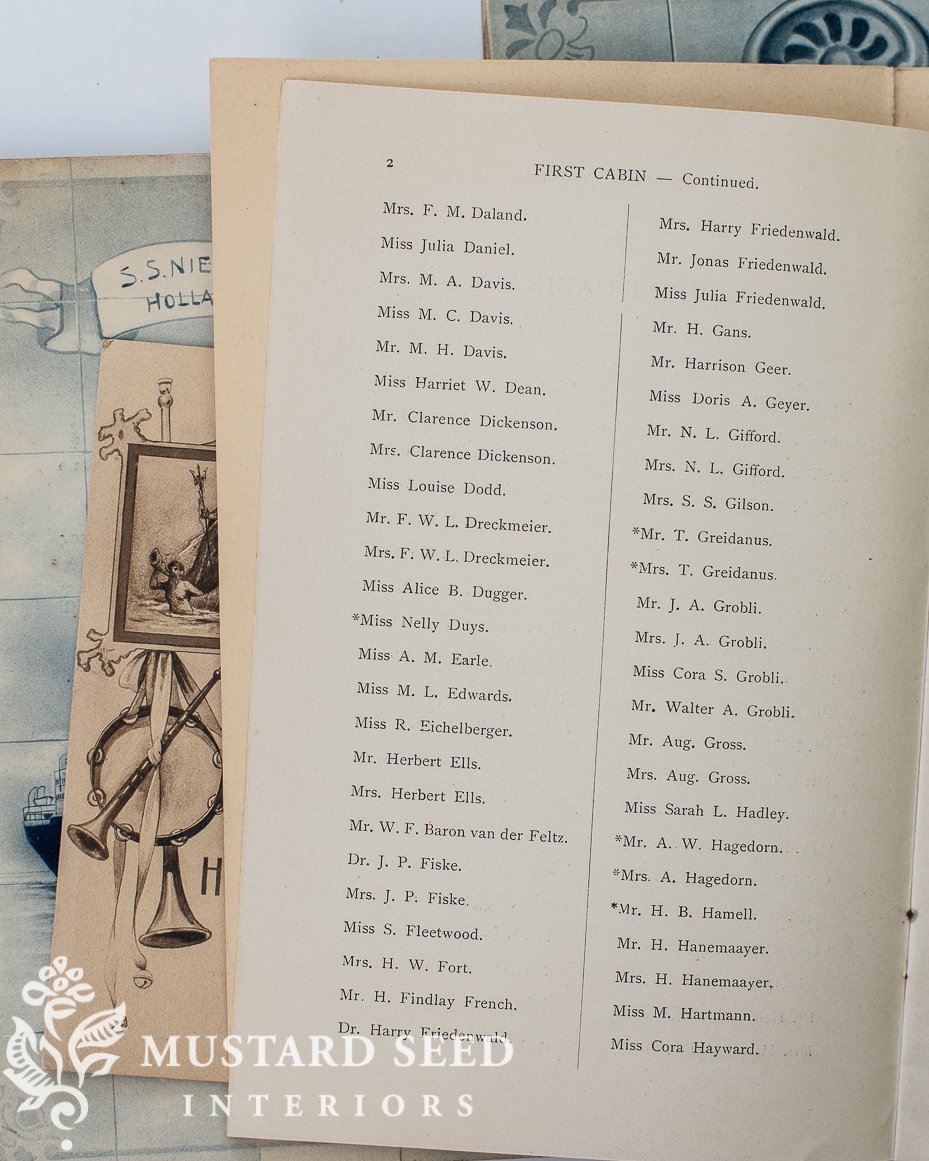 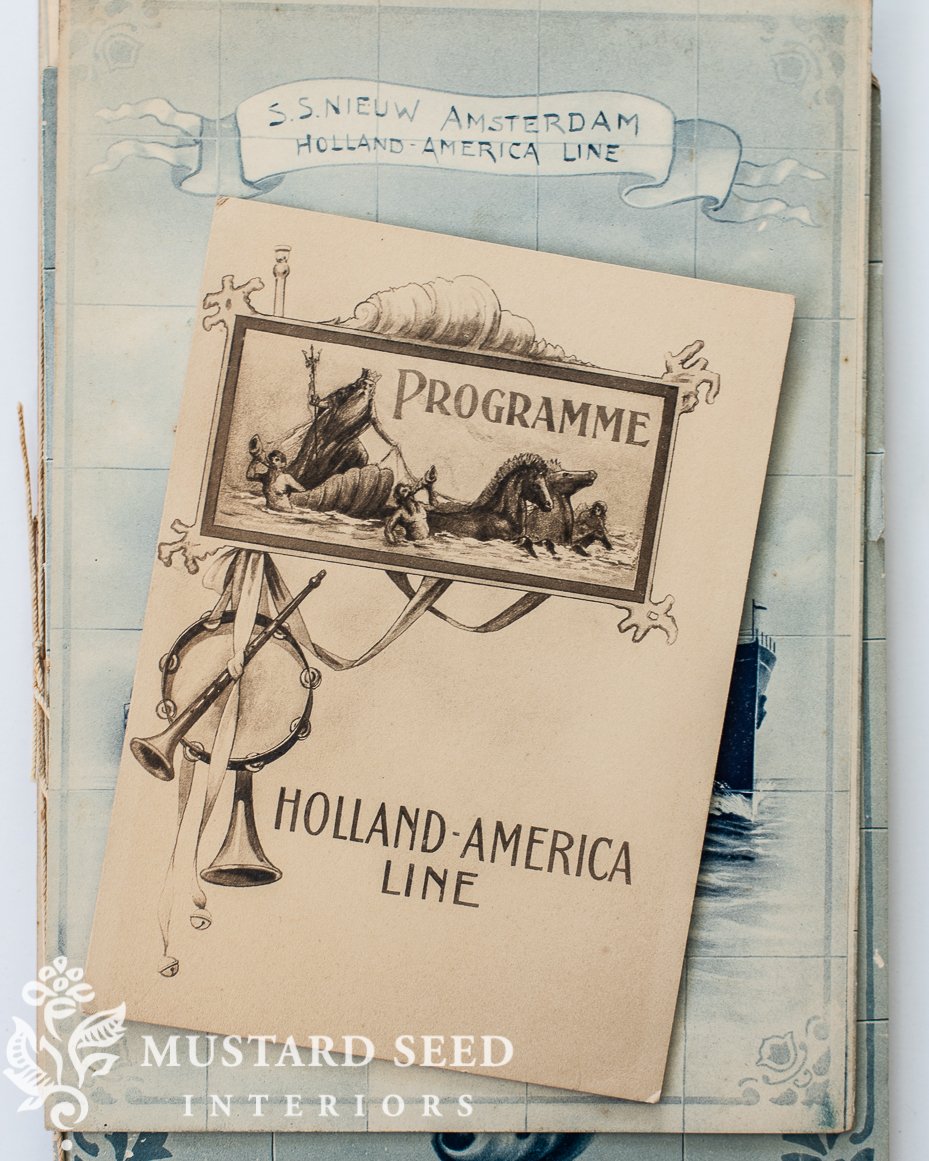 Alice also had brochures from Germany, Italy, Switzerland, France, Scotland, and more.  She wrote her name on the inside cover of each of them.  Maybe she was on a grand tour? 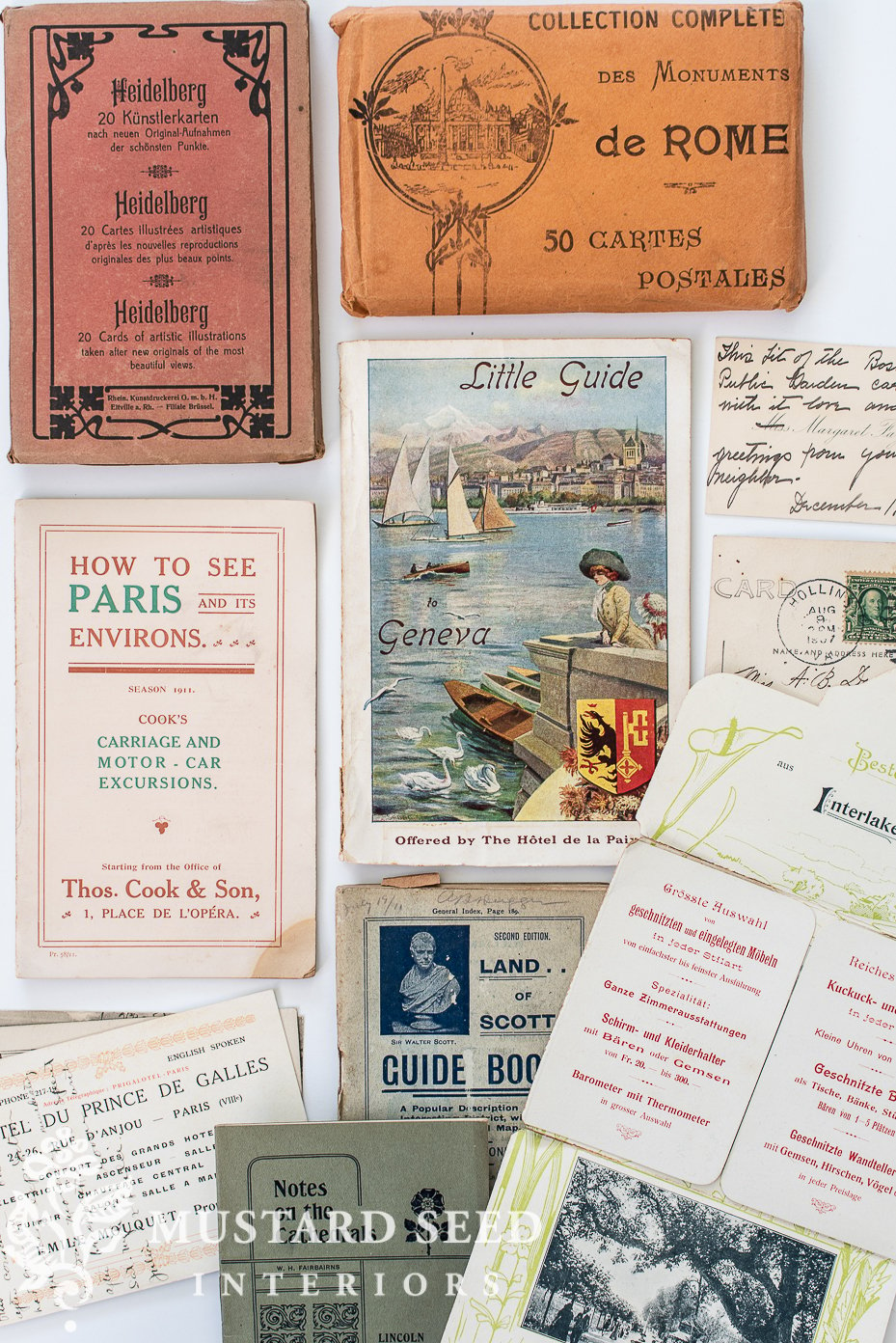 I did a bit of searching on Alice, using the addresses on the postcards (She had addresses in Hollins, Petersburg, and Farmville, VA.)  Of course, I got all sorts of news about the Duggars when I was running searches, but I eventually found an Alice B. Duggar that was potentially the woman from the postcards.  Alice B. Duggar was listed as the librarian at the State Female Normal School in Farmville, VA in their 1911 yearbook. 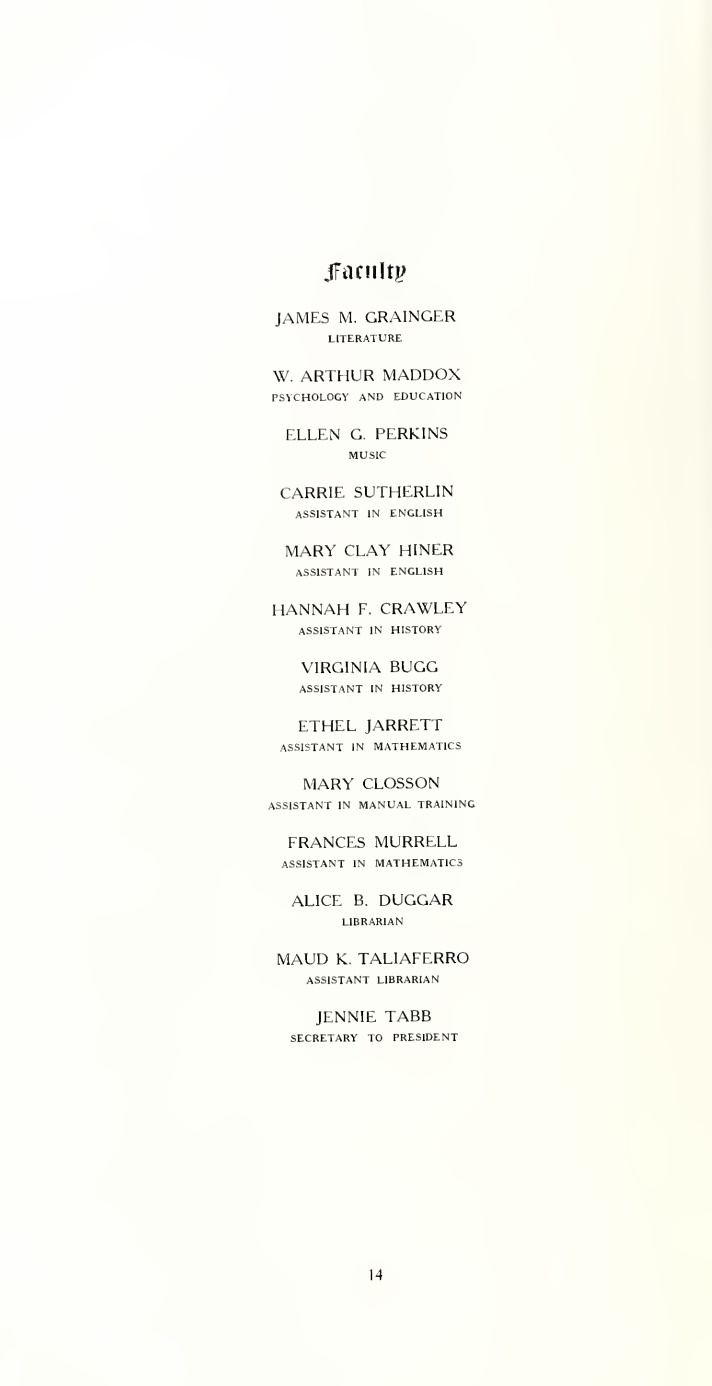 She’s somewhere in the mix of this group, but the photos aren’t labeled.  A lot of those ladies look like they could be well-traveled librarians! 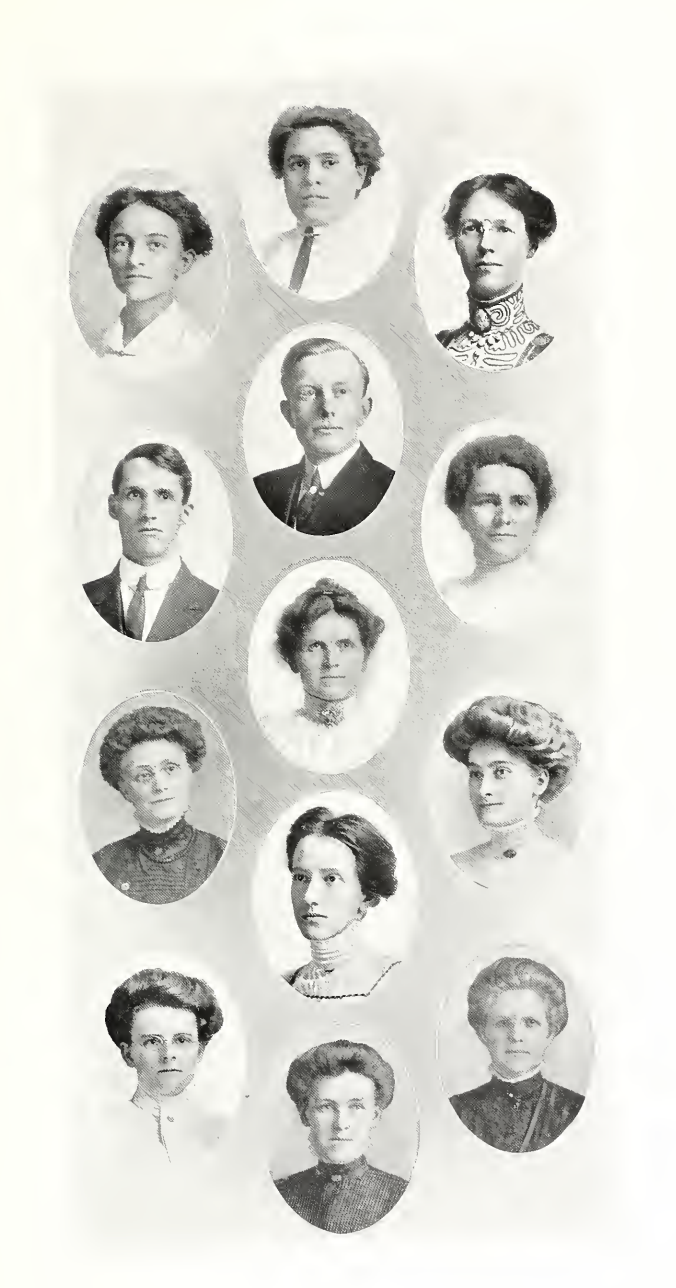 That school eventually became Longwood University for those who are interested.  I couldn’t find anything beyond that.  UPDATE!  I found a bit more information.  She was Alice Boisseau Duggar (b. 1879 – d. 1973.)  My family knew some Boissaus in Petersburg, so maybe they were related somehow.  I also learned she is buried in the same cemetery as my Oma, Opa, and other relatives.  Thanks for those who are giving me little hints that they find!

I know I have some great researchers who read this blog (you’ve helped me out on things like this before), so let me know if you do any digging and find anything on her.  I don’t know what I would do with that information, but it’s nice to know.

Detailed organizing is rewarding, but it can be monotonous and overwhelming at times.  It’s nice to discover these little prizes along the way and take a few minutes to appreciate them.  I’m going to review the family postcards and then put them in an archival box.  I put Miss Duggar’s things in with my antique papers and letters to use for creative purposes (although I rarely have the heart to cut them up or glue them down!)  I usually make pockets for them or affix them in a way they can be removed without damage.

So, do you think you have things in your house that you don’t know about?  I know many of you have been organizing over the past year or so.  Have you found any surprises?