Lucketts was a whole new ballgame this year.  Not only was it extended to three days, with a VIP day on Friday, but the hours were longer.  As I was preparing, I knew I needed to fill my booth like I never had before, so it wouldn’t look pathetic on Saturday after the Friday shoppers hit it.  So, my preparations were more focused and intense than they had ever been.

It all started back in March with weekly shopping trips to my favorite haunts and working on furniture that had been in “the studio stash.”  I also started trolling Craig’s List daily and put the word out to other dealers I buy from that I’m gearing up for an event.

I had some wonderful luck finding French chairs, but I was coming up empty when it came to dressers, buffets and small chests of drawers, which tend to sell best for me.   It was just a few weeks before the event and I was getting nervous about it.  How could I finish all of this upholstery work in time and where will I put all of the ironstone I was finding if I didn’t have tables, dressers and buffets to put it all on?  My “luck” changed and I found seven pieces in one day and then five more a few days later, all for great prices.  Lucketts was really shaping up.

We started crossing more off the list each day until there was nothing left to do. 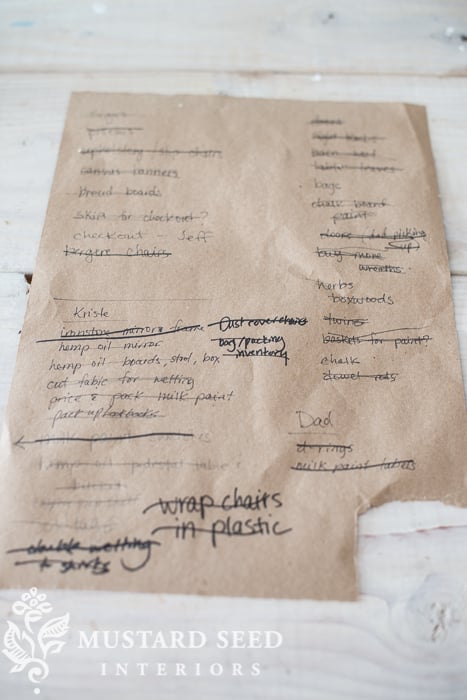 Well, that’s a part of my problem.  I always find more to do, but I have to draw the “I’m done line” at some point for my own sanity.  So, I declared us done.

When it was all packed together in boxes, rows and stacks, I was pretty impressed with us and how much we accomplished. 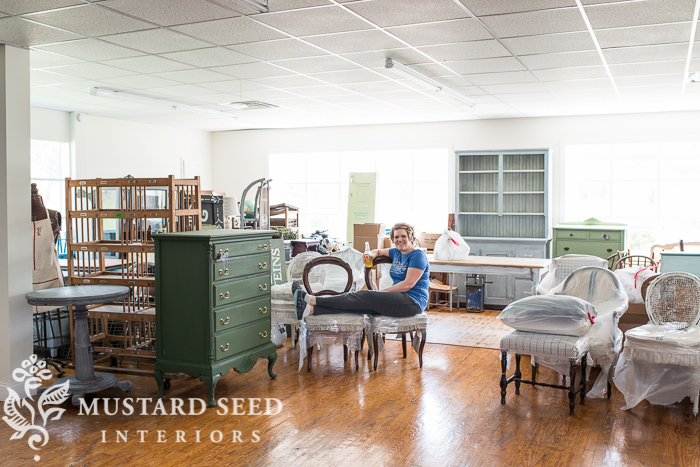 And then it was just me and all of the stuff in the quiet of the studio and I had to figure out where to put everything and how we would even get it all down to Lucketts.  We rented a larger truck.  I put a plan on paper and numbered strips of tape on each piece, but I still didn’t know how it would really work out. 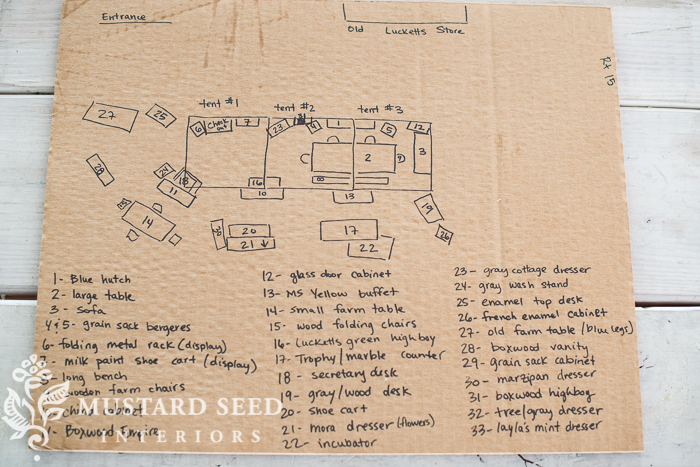 That’s when the doubts started to creep in.  Was it too much?  Was it not enough?  Would this year be a failure?  I had so much furniture that it couldn’t possibly fit under my three tents.  What would I do if it rained?  Thoughts like these can make you crazy.  They made me a little crazy.  I had to take a deep breath, pray and wait to see how it would all unfold.

We were able to get everything down, even though it took a 20′ truck, two van loads and one car load.  It did rain, but at the perfect time, when we had sold enough to be able to fit everything under the tent.  As far as gross sales, it was my best Lucketts ever.

The extended hours spread out the customers, making the entire event more relaxed and I think much more enjoyable for the shoppers and manageable for those running the event. 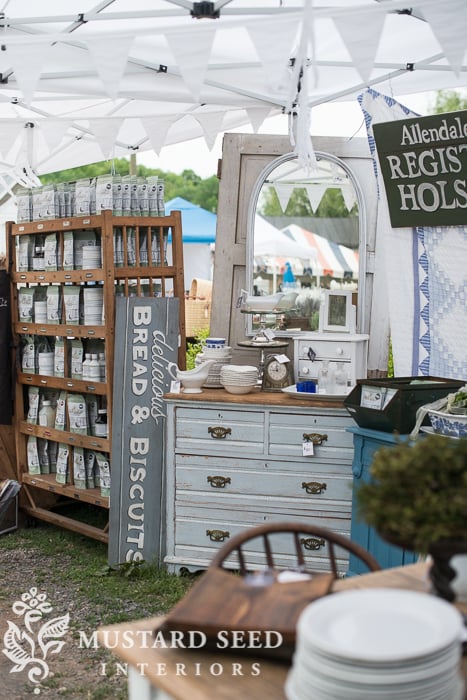 It felt a little strange for the Mustard Seed Interiors booth, though.  We’re use to a huge rush, a frenzy, and long lines.  This year, there was just a steady stream in the mornings followed by lulls in the afternoons.  We all felt a little anxious, seeing things without sold tags on them, but the sold tags got tied on, just not all in one hour on Saturday morning! 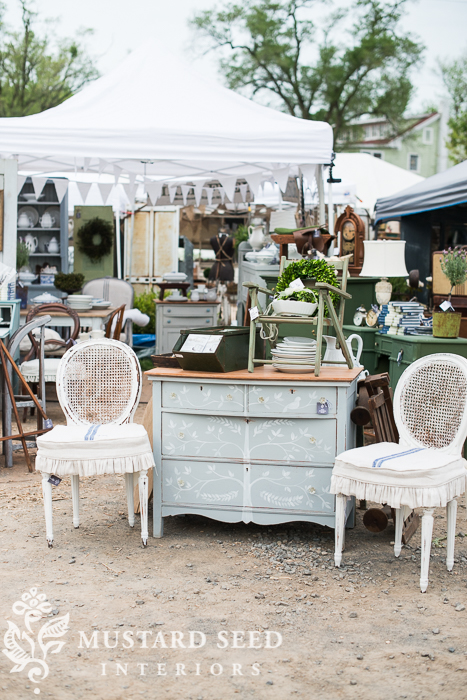 Now that I’ve been through the event and had a chance to take a breath, this is what I’ve learned…

1.) I did bring too much stuff.  Not TOO much more, but I will scale back a little for next year.  I brought 28 large pieces, 14 French chairs, several benches, stools, chairs, sleds and crates, 10 hand painted signs and over 500 pieces of ironstone (and we think it was even more ironstone than that!)

2.) When the customers are spread out, we don’t need as much help.  Every year, we’ve needed more help to handle the crowd that descends on my booth.  We learned that a few years ago when it was just me and my mom working out of our aprons.  We were mobbed and woefully unprepared.  We needed about 9-10 people to run my booth last year.  I think we could’ve gotten by with 4-6 during the busy times this year. 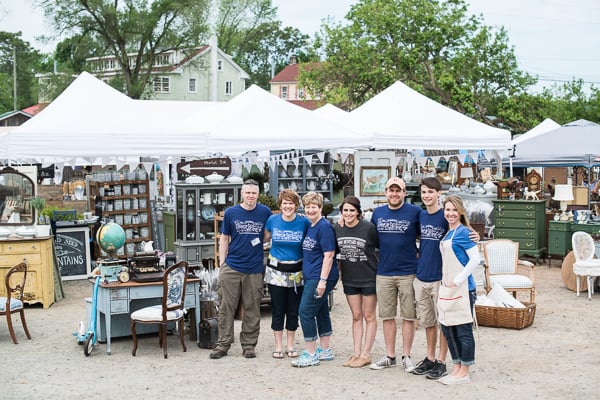 3.) Ironstone plates are not the best thing to bring to sell at a market.  I had stacks and stacks of bowls, platters and plates and I think it was just too overwhelming to customers.  Not just the selection, but also looking through them all.  We had to stack them, so we had room for them, but that meant someone would have to rearrange a whole stack of ironstone and sort through it if they wanted to buy something.   I’ll bring some plates next year, but I’ll focus my buying on small pitchers, sugar jars, tureens, etc. 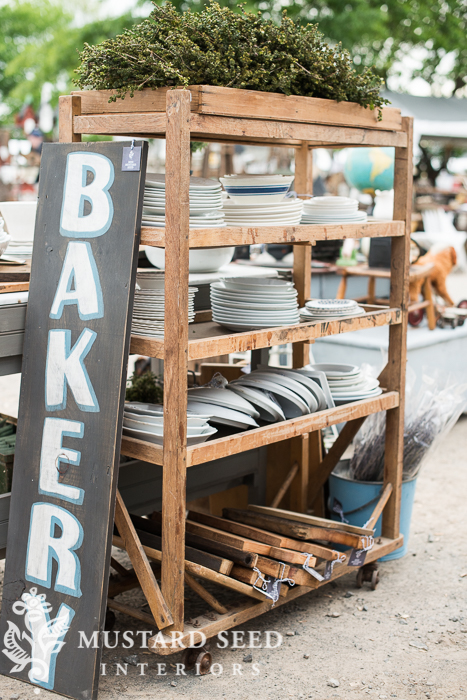 4.) I need to get more organized at the checkout and wrapping station.  I brought tons of paper shopping bags that we had to store and keep dry and it was too much.  I also need to give my dad a shrink-wrap allowance. If he wrapped one of your purchases, you understand what I’m saying! 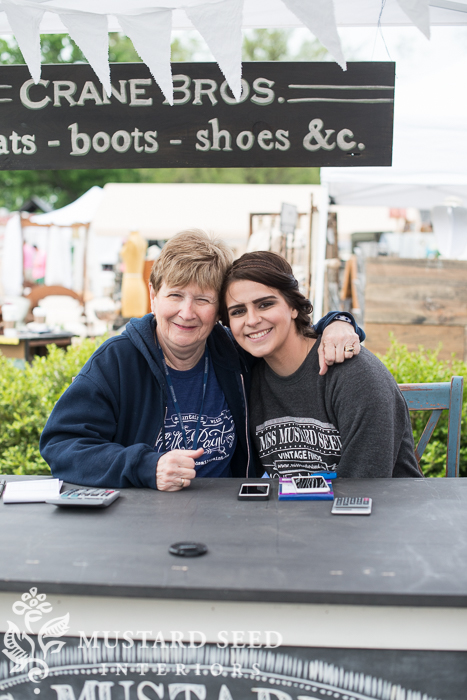 5.) We need to get a tent that is one piece and waterproof.  Right now we’re using shade tents that are only water resistant and they need to be covered in one, huge 30 x 50 tarp when it threatens to rain.  It’s just not very practical and it’s time for an upgrade.  (I will be selling two of the tents, so let me know if you’re interested!) 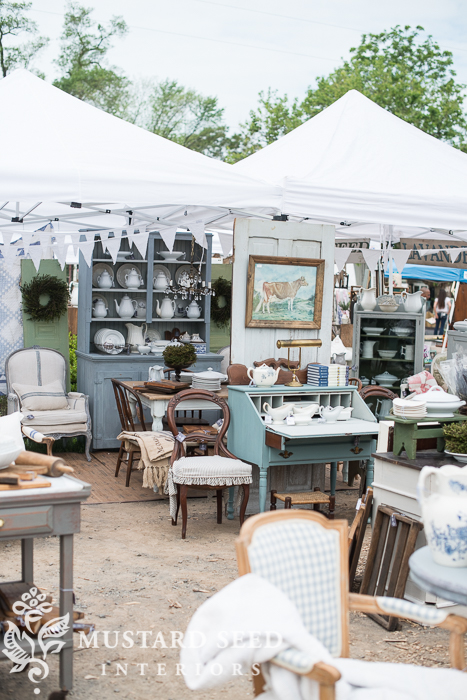 6.) If every I find another antique chicken incubator, I need to buy it without hesitation!  I could’ve sold that thing 10 times over. 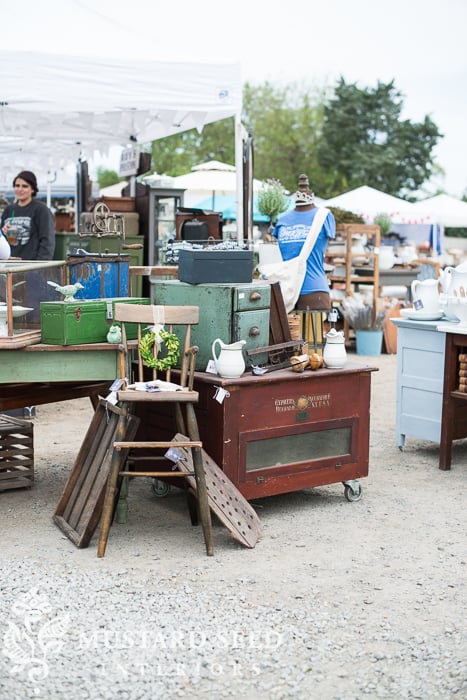 Despite the drenching rain on Saturday night, the hot and humid weather throughout the weekend, the tense packing Sunday evening, and the overall uncertainty going into the event, everything worked out really well.

And, after about a 9 1/2 month break, we’ll be looking forward to next year!