Man, it has been a long, productive day and I am pooped!  Of course, I decided to start exercising the day I had a bunch of physical work planned.  That was brilliant.  I use the word “exercise” loosely, though, because it was pathetic how out of shape I am.  I am still babying my shoulder and about 10 minutes into interval training, modifying everything, feeling stiff as the Tin Man, I realized I just needed to stretch and work on core strength.  I switched gears and did some Pilates and that felt great, but I have been sore all day as I painted window trim and shoe molding and moved furniture back into the dining room and my office.

I still have a lot of work to do on those two rooms and a lot of cleaning up to do after having the entire contents of two rooms dumped into our main living area, but it’s coming along!

I haven’t had a chance to go through the pictures I took, yet, so we’re going to rewind a bit and I’ll show you the curtains my mom and I made for the living room when she was visiting. 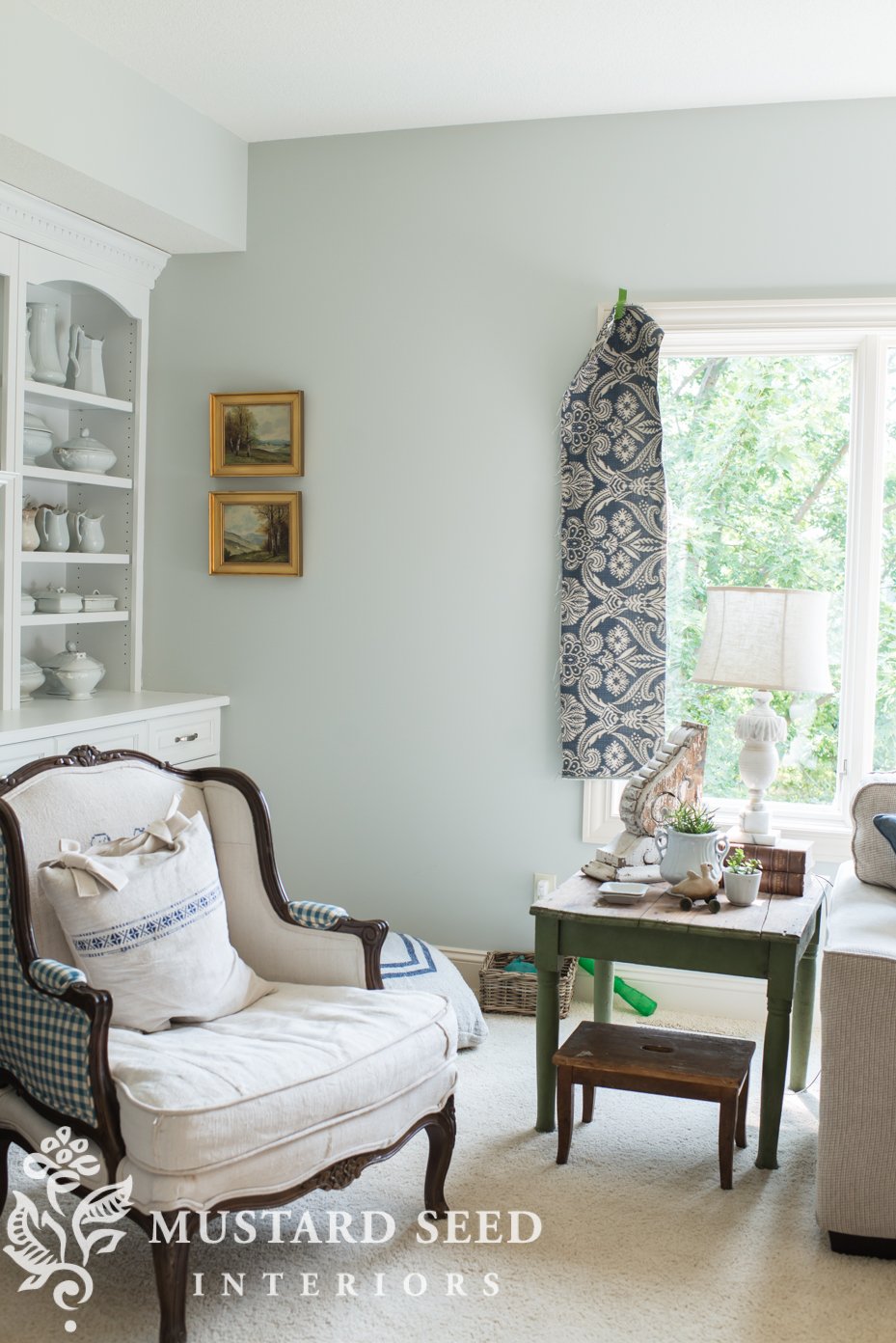 …And it finally became a pair of lined and pleated drapes a couple of weeks ago. 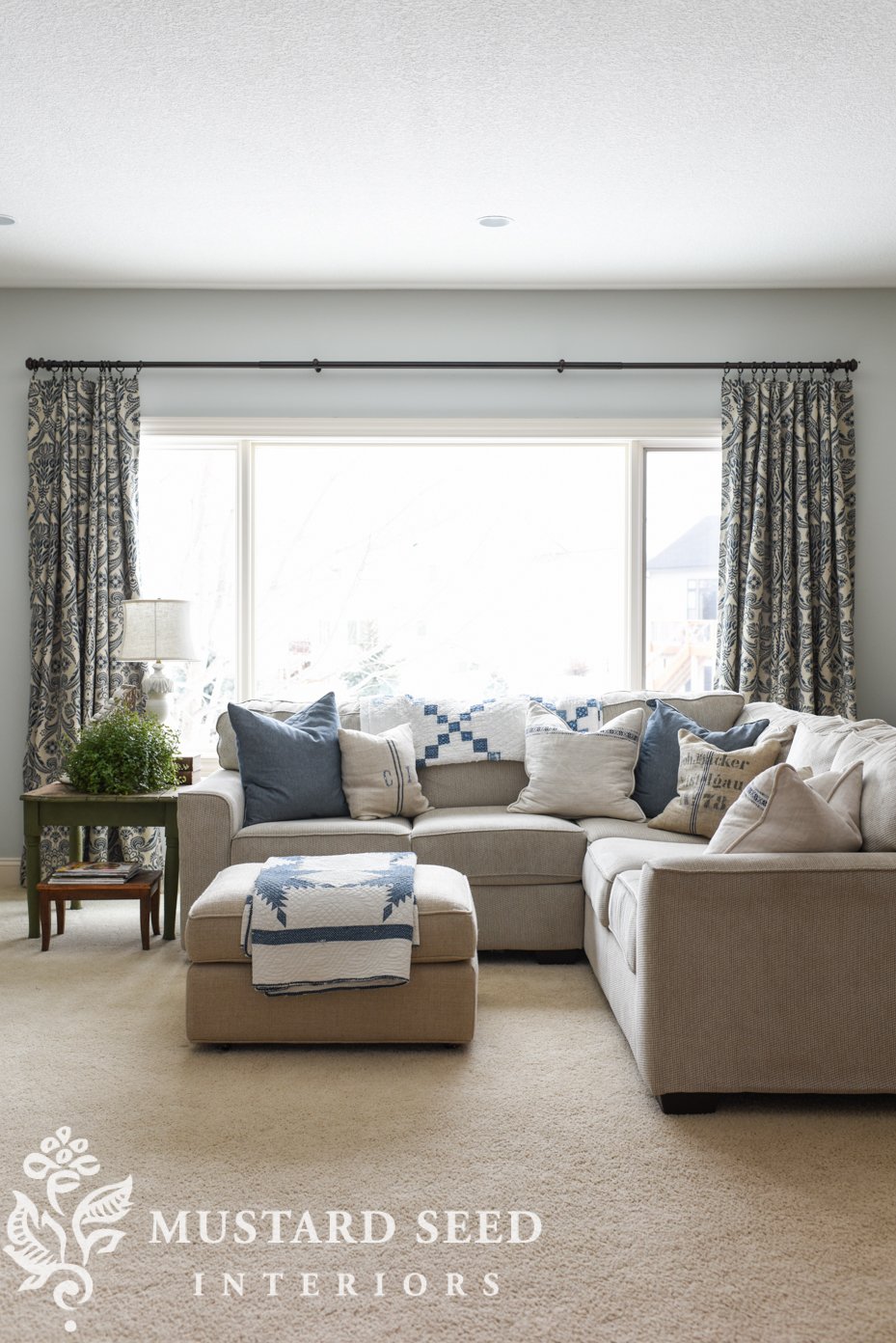 We made these the exact same way we made the curtains in the master bedroom.  You can find those details HERE.

I made these double-width (meaning they were made with two panels pieced together to make one large panel), but I probably could’ve gone to a triple-width panel given the size of the window.  We knew that it would be very rare that the curtains would be completely closed, so I didn’t feel the need to spend the extra time and money on it.

It ended up being a good thing!  As we were hanging the curtain rod at (almost) its maximum width, it became clear that one support in the middle (allowing full function of the drapes) wasn’t going to be enough.  The rod would not sit straight with just one support, so we ended up having to add a second support.  We knew it meant we couldn’t draw the curtains completely, but they were mostly decorative and to block the sun sometimes.  The room is south facing, so we can get some pretty intense sunbeams coming through.  Now, we can pull the curtain to create some shade where and when it’s needed. 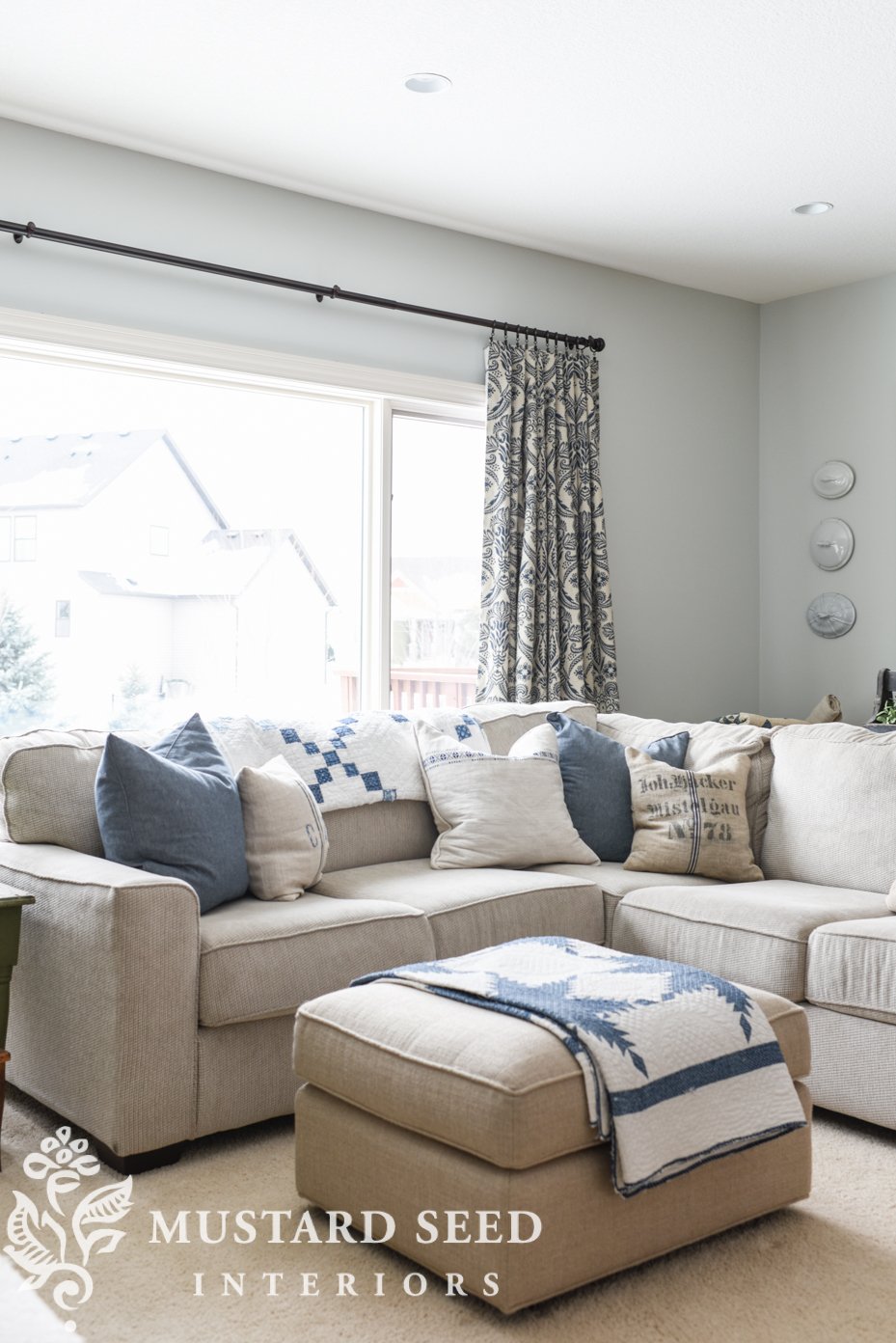 I still need to make pillows and do a few other things to tie it all together.  The curtains really add a lot, though.

We are also planning to, down the road, install some white box beams and crown molding in this room.  That is a post-masters-degree project and a fairly low priority.  It will add a lot to this room when it happens, though! 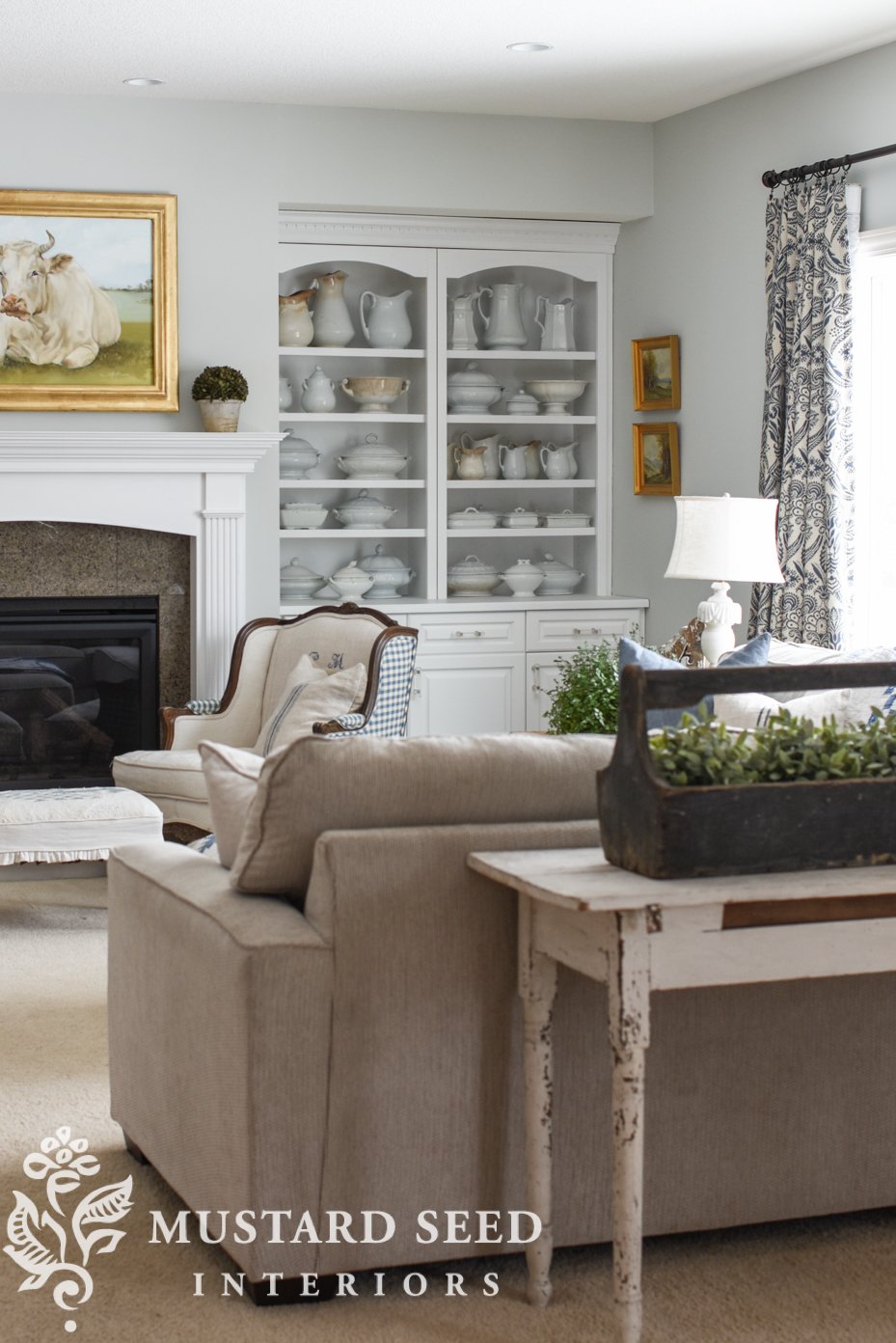 One thing I’ve enjoyed about winter in this house is watching the boys cozy up to the fireplace.  They have never had one before and, lately, I’ve noticed the French chairs, which are usually turned out to the room, are turned more towards each other or the fireplace.  At first, I kept “fixing” them, but then I realized the boys were turning them, so they could enjoy the warmth of the fire while they read a book or worked on homework or chatted with each other. 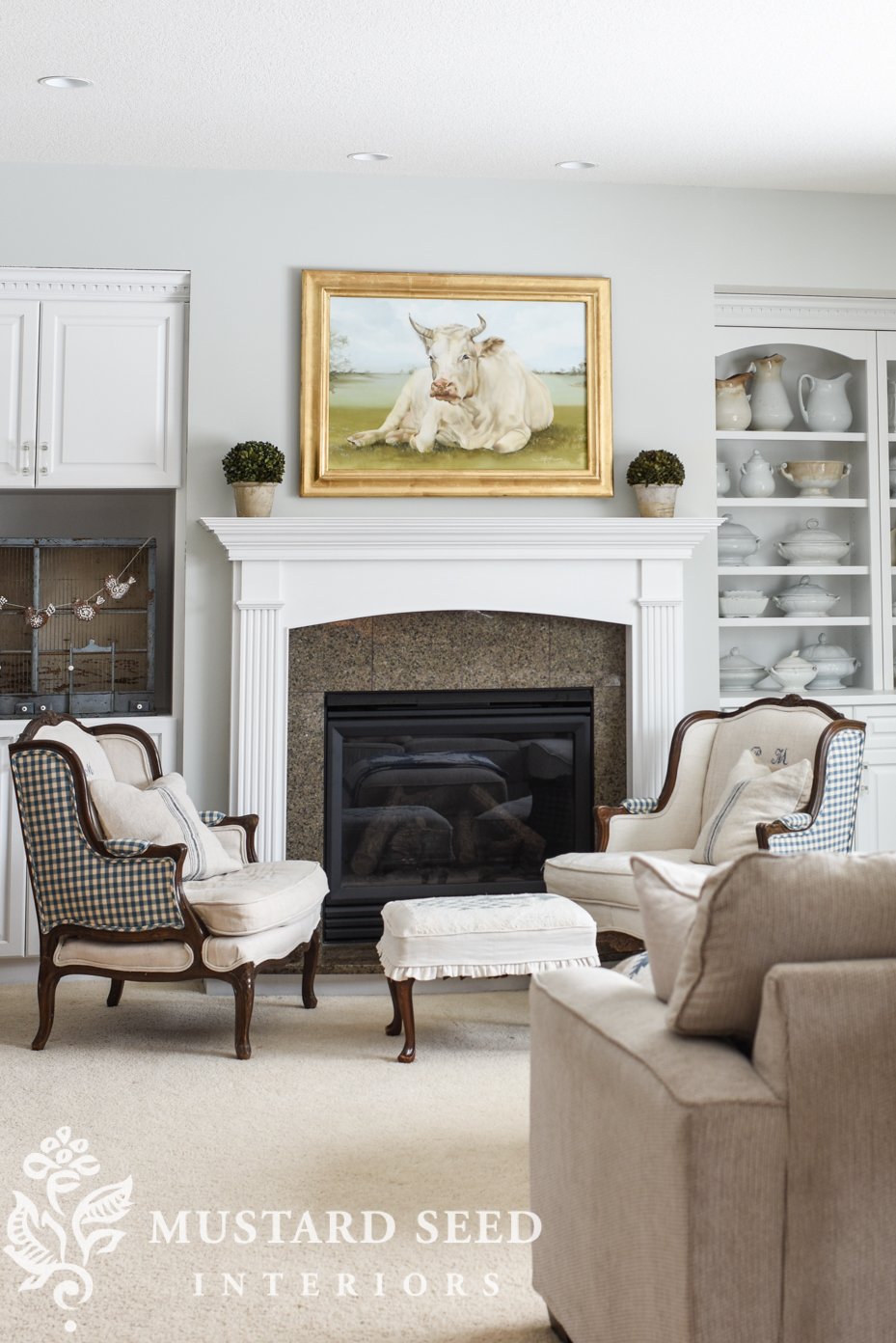 Even though this house is larger than our last one, we use the space so much better.

As we were working on home projects together today, Jeff and I remarked just as much to each other.