Sometimes timing, place and circumstances all align and something happens that you don’t expect.

So, last week, I shared that I did a photo shoot of a porch and Kriste and I had a couple of dogs for company.  As I worked on the shoot, I thought the time is coming soon when our family will get a dog.  We’ve been thinking about it for over a year, but never pulled the trigger on actually getting one.

One reason was that it felt like Jeff and I wanted different things.  He wanted a specific breed, an Australian Shepherd, so he was looking at puppies on breeder websites.  I wanted to adopt a rescue dog, one that was a little older, maybe around two, who was already past the puppy stage, was house-trained, and well-behaved.

So, we both looked now and then, but never spotted one we were both excited about.

This weekend, Jeff went on a retreat to New Hampshire, so it was just me and the boys.  On Saturday morning we tagged along to a local “cat farm” my parents were visiting.

It’s not really a cat farm, but that’s what we call it.  It’s actually a couple who has a love for animals and they take in strays, rescue animals, and cats who aren’t good candidates for adoption.  They have over 70 cats and that may sound like mayhem, but they take amazing care of the animals on their 30+ acre farm.  They also have horses, a couple of dogs, chickens, etc.  It’s a little animal haven.

My parents were visiting, because she took in their cat that they weren’t able to keep.  He was wetting in the house frequently and then didn’t fair well as an outdoor cat roaming a suburban neighborhood.  He’s now at the farm and doing really well there.  So, my parents visit him every few months and also bring out cat food and litter to support the owners.

My boys like going to the farm to play with the cats and dogs.  This was my first time going, but they had been before.  When we arrived, a sweet dog was bounding around as I pulled the car into the driveway.  He didn’t jump up on us or bark, but wagged his tail, licked our fingers and sat still when we pet his head.

I gave the cats some attention and played more with the dog, Sebastian.  The boys were loving on him, too, throwing his squeaky bone and scratching his ears.  It’s a big thing for Calvin, who has always been pretty fearful of dogs.

I had the thought again that we should get a dog soon and, when we do, I hoped he would be just like this one.  Sebastian seemed perfect.  I mentioned that to my dad and he said he bet we could have Sebastian.  Oh, I wouldn’t want to take their dog!  I wouldn’t even ask that.

After the visit, we got in the car and I mentioned to the owner that we have been considering getting a dog for a long time and if she came across a rescue dog that would be great for a family to let us know.

“Well, we have a black one right here who would love a family like yours!”

“Seriously?  You would part with him?”

She confirmed that they would and shared that she and her husband were just talking about how they love having him, but he really needed to be with a family with some kids, so he had more action and attention.  Even though they weren’t actively trying to re-home him, they were hoping one day the right family would come along for him.

And we seemed to be it.

I snapped a picture of him and said I would talk to my husband about it, we’d think about it and let her know.

We went out to lunch and I texted Jeff as soon as we sat down.  I started off the text with, “I’m serious about this…” and proceeded to tell him about Sebastian and how I think he is “our dog”.  I didn’t really know what to expect from Jeff, because, while we had talked about getting a dog, actually getting one didn’t seem like something that would happen any time soon.  And I’ve never sent him a “honey, can we bring an animal into our house” kind of text before.  Usually it’s an antique hutch, settee, or buffet.

His response was, “Get him.” 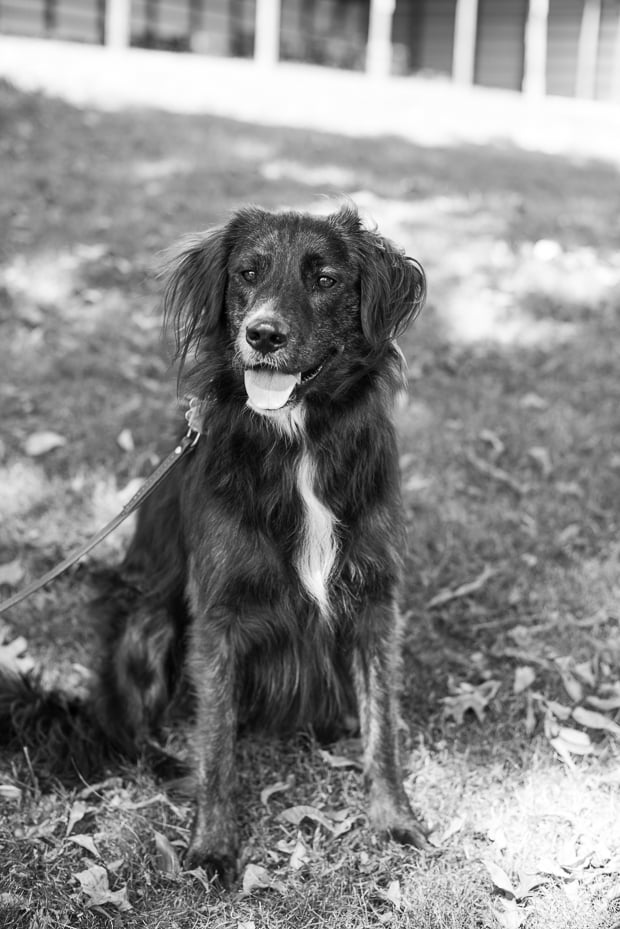 A few things about him…  He’s a 1 1/2 year old who was adopted as a stray from Arkansas by the couple we got him from.  As best as anyone can tell, he’s a border collie with possibly some shepherd and spaniel mixed in.  He is already house-trained, crate-trained, and very obedient.  So, the breed makes Jeff happy and the fact that he’s past the puppy stage makes me happy.

And the fact that he is a dog makes the boys happy!  Calvin, our youngest, has especially taken to him.  They had a snuggle-fest all over the floor the first day he was in our house and he’s been saying things like, “Our house is so much more fun now.” 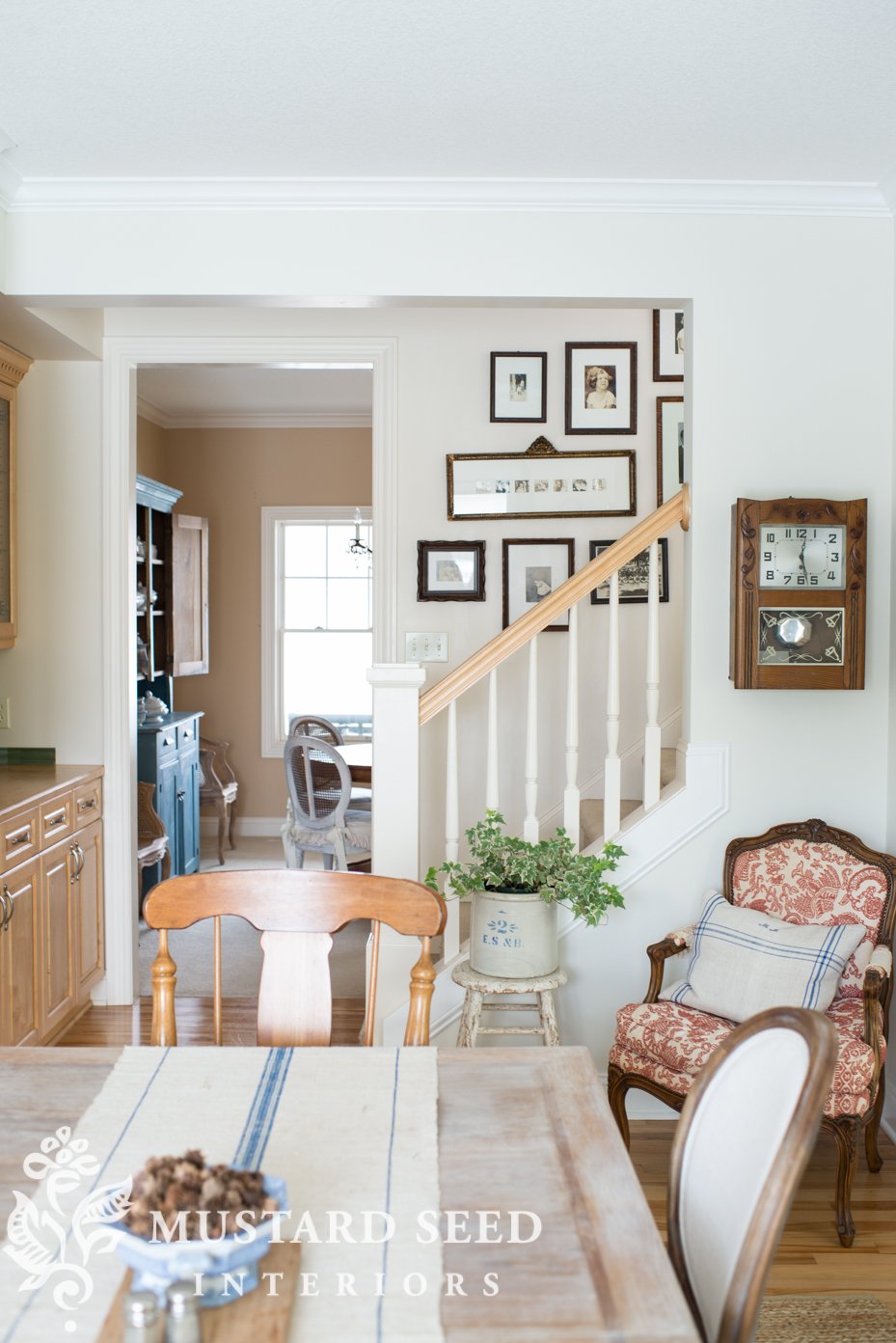 Marshall is ready to teach him to do every trick in the book. 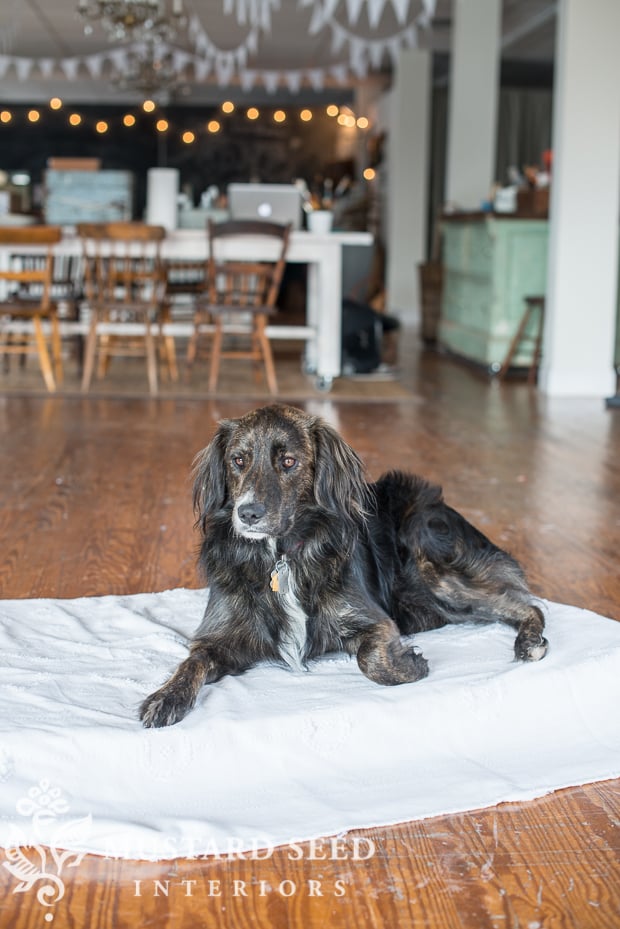 I will be getting him a proper dog bed, but I put together a makeshift one out of a remnant of upholstery foam and an old blanket.

I always loved the idea of bringing our future dog to the studio with me, so he/she wouldn’t be lonely during the day, but I figured that wouldn’t be very realistic.  He’s such a good dog, though, that it’s working really well.  He doesn’t get into anything and just hangs out.  Of course, that might change once he gets more “comfortable”, but things are going well so far.

And I set up a little treat jar for him, and other dogs who might visit, in a jar one of my sweet readers, Barbara, gave me as a gift. 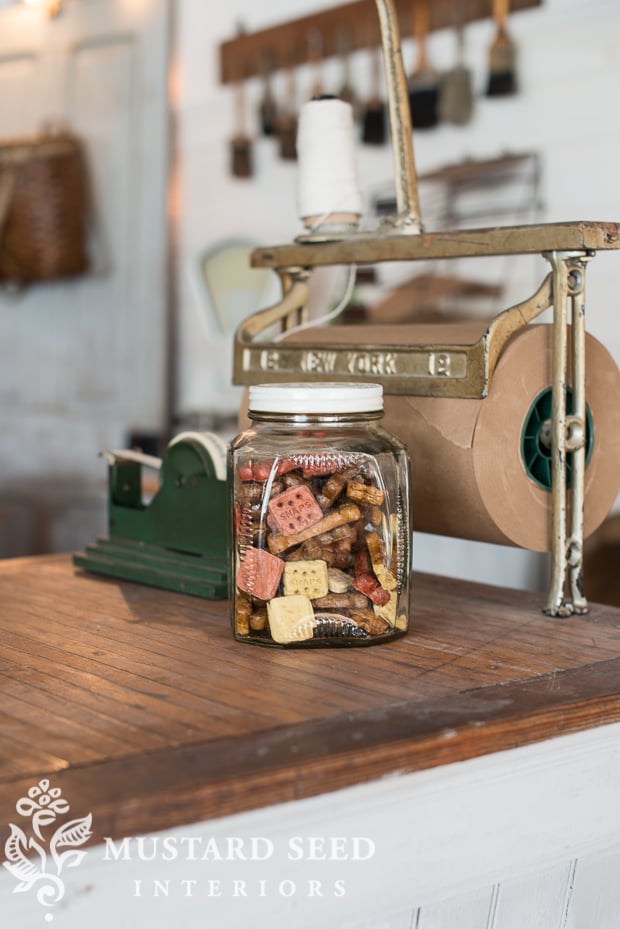 There’s a lot to get used to, like dog park etiquette, dirty floors, grooming, riding in cars, and walks in our jammies… 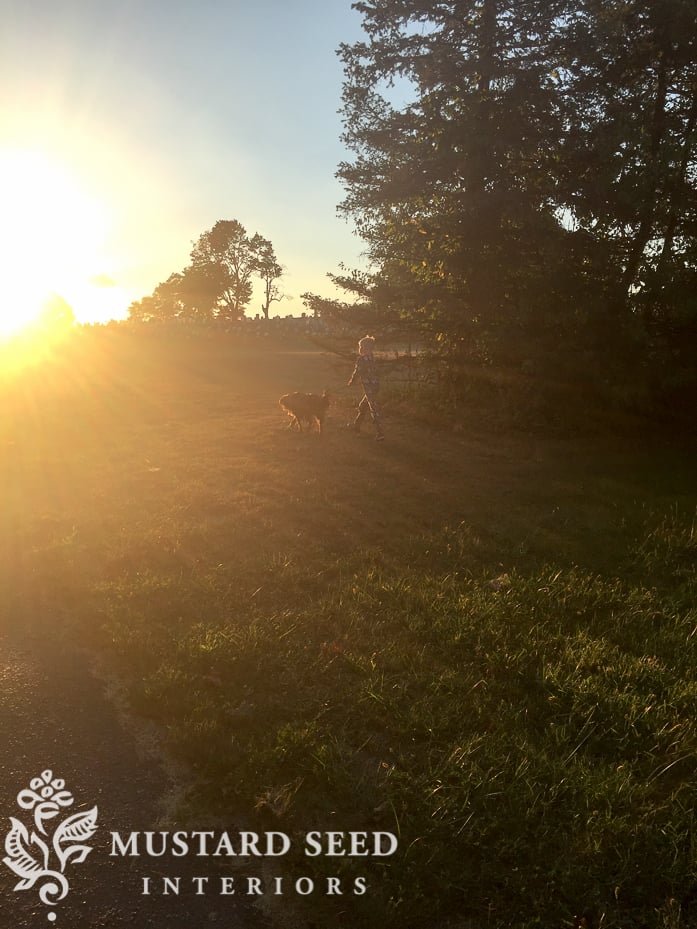 And I’m brand new to the world of poop baggies, dog beds, leashes, and other gear, so I’d love if you’d share your tips, suggestions, and favorite things with me.

Another chapter of life begins…

June’s Books of the Week

228 Comments on “Joining the ranks of dog owners…”

Today, my mom and I are working on sewing projects

Today, my mom and I are working on sewing projects