Installing the tile back splash

I woke up today, ready to get to work on the tile.  I had the tile saw (borrowed from a friend), the tile, the supplies and my dad lined up to help.  The morning was cold, but sunny.  So, I started to get everything set up and it started to sleet.  Okay.  No biggie.  We have to use the saw outside, but I’ll just set up a canopy tent.  By the time I gathered the saw horses and brought the canopy to the deck, it was like a blizzard outside.  Uh-uh.  I am tiling my back splash today and that is that. 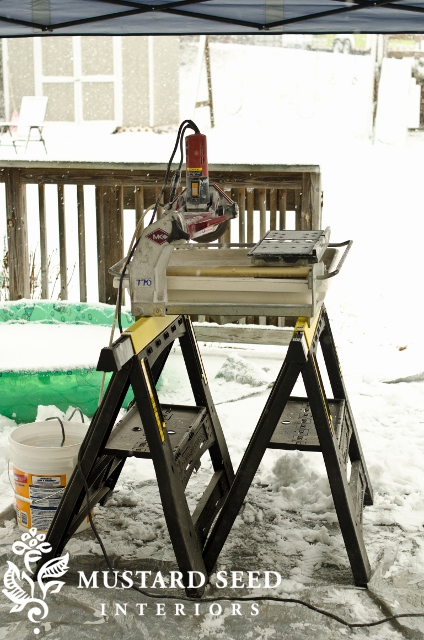 My dad and I got a nice cozy setup on the deck and got started.  (Yes, that’s a kiddie pool on the deck that has one big ice cube in it.)  I got about 2/3 of the way through the project and realized I was woefully unqualified to write a tutorial on installing tile!  So, instead, I’m going to share some tips, advice and things I learned along the way.

First we used tile setting mats, which were awesome.  They were sticky-back and then had strips of glue on the front to hold the tile in place.  This meant no mortar, fewer tools and buckets and mixing and figuring out dry times.  It was really simple to use. (This isn’t a paid review, by the way.) 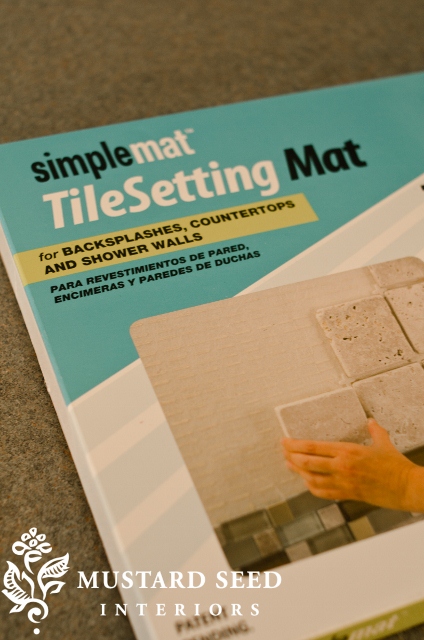 You peal off the back and stick it to the wall.  It doesn’t have to be perfectly straight or neat because it’s going to be covered by tile.  The most important thing is that the wall is smooth, so the tile can make good contact with the adhesive. 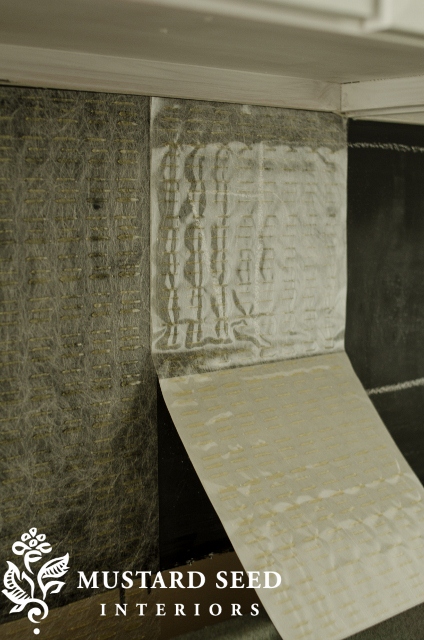 The one downside is that once tile is stuck to it, it is STUCK.  You have a bit of slide-a-bility with mortar, but not with this stuff.  You also can’t use it on really big or heavy tiles.  I did all of the sticking, measuring, marking and placing the tile and my dad did the sawing.  I’m not normally intimidated by power tools, but I was a little scared of the tile saw.  Just a little.

So, here’s what I learned:

1.) If you’re tiling for the first time, do not pick a herringbone pattern as I did, foolish girl that I am.  After the first cut, I realized this was a classic “Marian decision” of design over practicality.  It worked out fine, but it would’ve been sooooooooo much easier to work with rectangles.  Well, rectangles that are lined up and not in a herringbone pattern.  If you have your heart set on herringbone, call a professional.

3.) Level and plumb really matters with tile.  With wood and fabric, you can wing it a bit…well, at least I feel that way.  You have to be more precise with tile.  The nice thing about the herringbone pattern is that it is busy, so it’s a bit forgiving.  Since cabinets, counters and walls might not be level and plumb, make sure to use a level and make marks.  I worked off the cabinets and got into a couple of tight spots.

4.) Tiling is really messy when you’re working with a stone like marble that has to be cut on a wet saw.  My hands were filthy (and very dry) all day, despite washing my hands every 10 minutes and applying lotion.  The counters were filthy.  I lined the floors with towels and we still ended up with drips all over the place.  Have lots of drop cloths and towels on hand.

5.) We started on the smallest wall that will be covered mostly by a microwave and toaster oven.  This way, I could learn a bit and not sweat mistakes, which I did make.  I messed up the pattern, but I could just laugh about it since it’s behind the microwave and not right over the range.  It’s a good idea to start in a section like that if it’s your first time tiling.

The verdict?  The back splash looks great and I’m really proud of myself.  I probably should’ve hired this one out, since the pattern was so complicated to work with, but after hiring out two tile projects, I wanted to tackle this one and I’m glad I did.  There are definitely spots that aren’t perfect, but grout and caulk can cover a multitude of mistakes.

I’ll share our plan for the counters and sink tomorrow.