hang your head in shame, faucet

The kitchen has come a long way since we moved in and, while it looks like a big overhaul, it’s really just involved paint, changing out the lights over the island, and hanging the pot rack.  The one big change we made was converting the electric stove to gas and replacing it with a beefy commercial-style range, which has been on my kitchen wishlist for over 15 years! 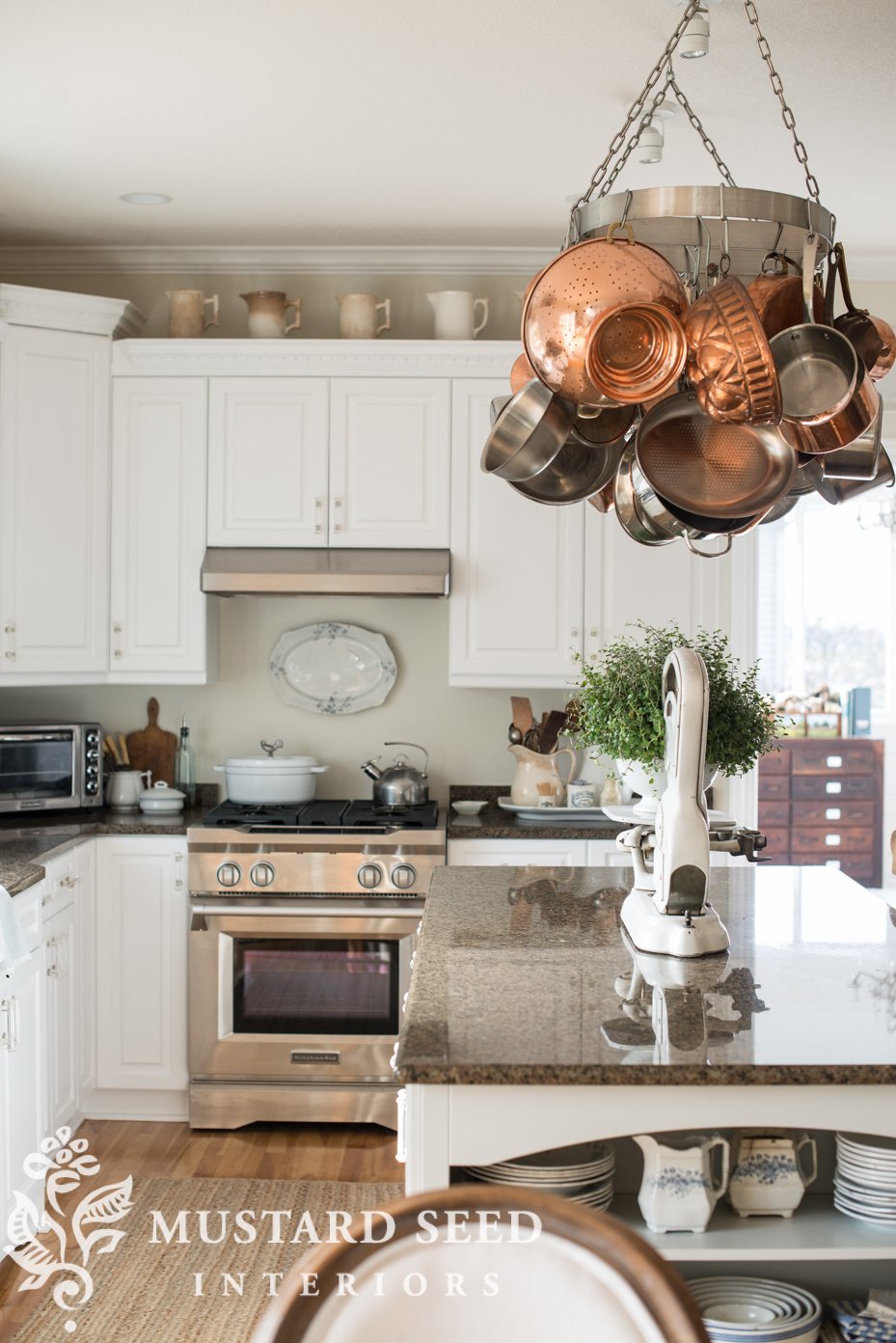 One thing that’s a pretty easy fix, but we hadn’t changed, was the faucet.  I have seen worse, but this one was pretty sad.  It’s not that it looked terrible, but it was not functional!  Well, water ran out of it, I can say that.  The pull-out sprayer, though, was loose and it flopped around most of the time.  On top of that, the faucet was difficult to swivel.  So, you’d grab the neck to move the faucet from one sink to the other and the sprayer would just fall out.  You had to know just how to move it, so it knew who was boss.

I shared the faucet on my Instagram Stories and one follower said it looks like it was hanging its head in shame. 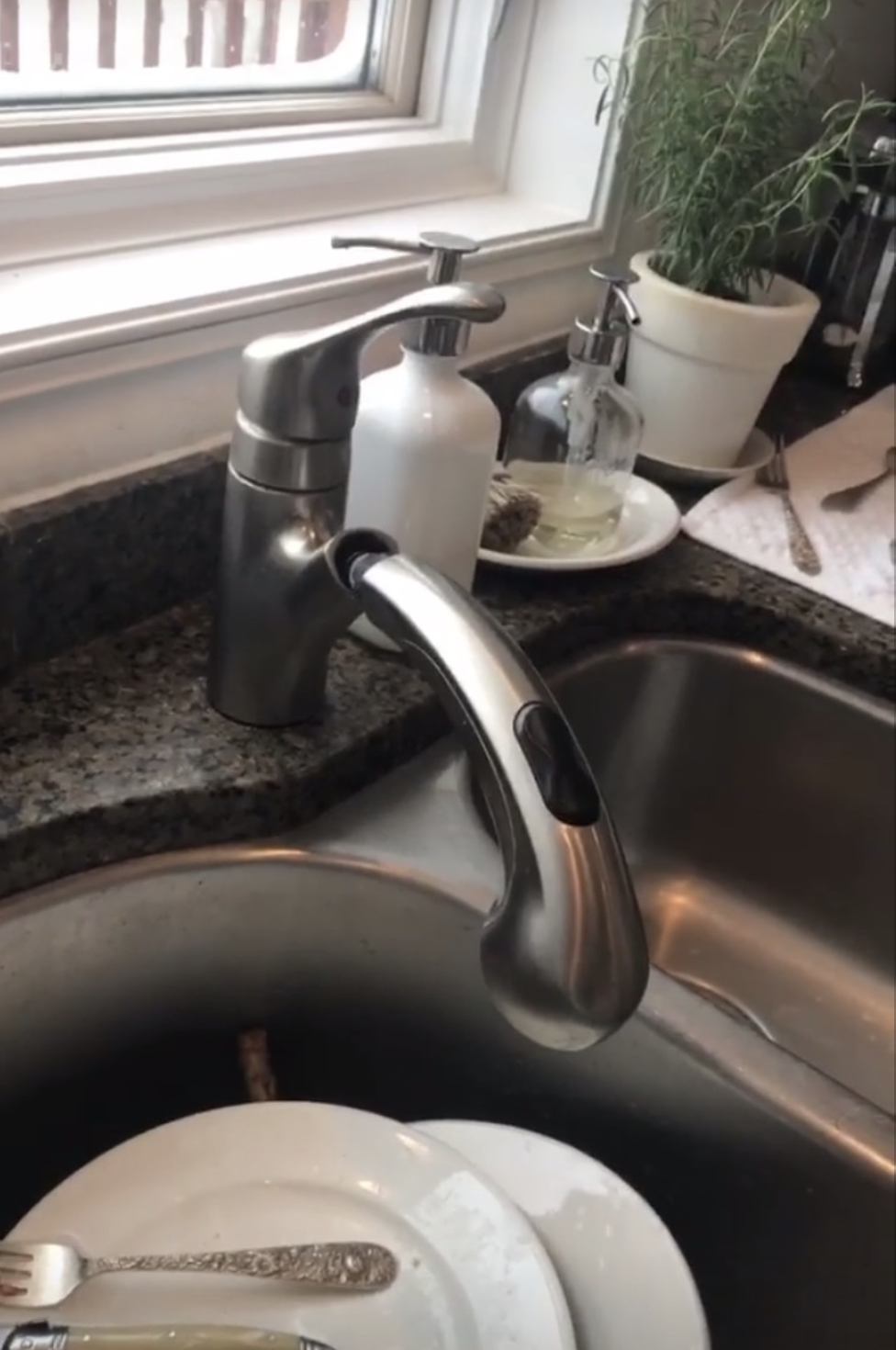 And it really does!!

That’s right faucet, you hang your head.  Keep staring down at my dirty dishes.

It seemed like a no-brainer to replace it the first week we were in the house, but I decided to wait.  I know that I want to change out the counters to something lighter and install and backsplash, so I figured I would just wait and pick out a new faucet and sink at that time.  (For the counter and backsplash, I’m thinking something along these lines…) 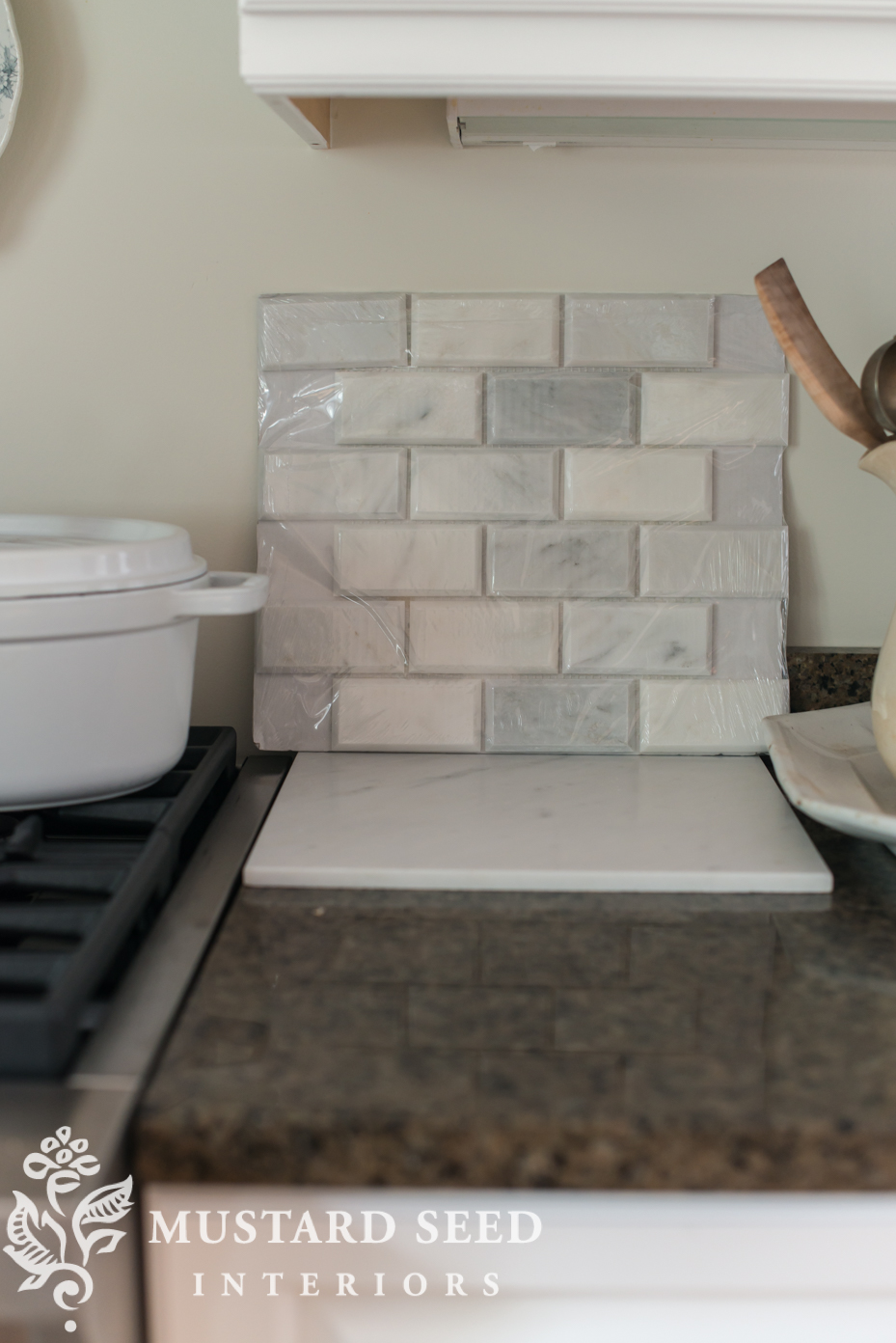 But, after using this sink for a while, it’s my favorite kitchen sink I’ve ever had.  It’s deep and I really like the larger “storage” sink and the smaller “wash” sink with the disposal.  Even though I like a traditional rectangular sink aesthetically, I love the functionality of this sink.  So, when the countertops make it to the top of the home-improvement list, I will most likely select a sink with the same shape.  And that means I’m going to stick with the single faucet.

I have a kitchen photo shoot this week, so it was good motivation to stop overthinking things and pick out a faucet.  As a bonus, we’ll have one that isn’t broken.

After searching around a bit, I selected the Delta Cassidy single-Handle Pull-out Faucet in a stainless steel finish (to match the appliances)… 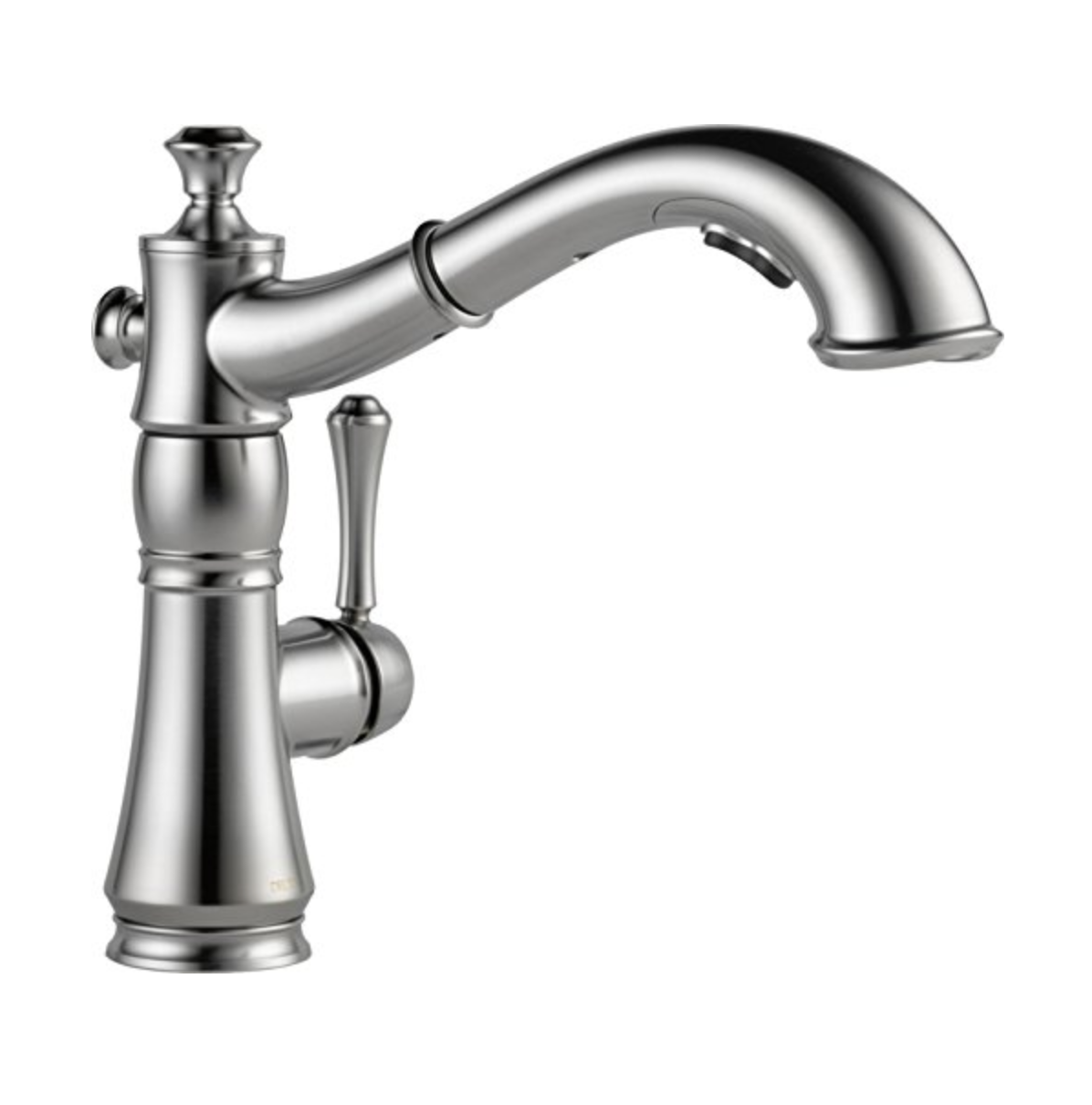 I like that it has a traditional look, but also has the pull-put sprayer.  It’s also higher than the old faucet, which was a little low for larger pots (and tall piles of dishes.)

Jeff installed it for me this afternoon and it makes such a difference! 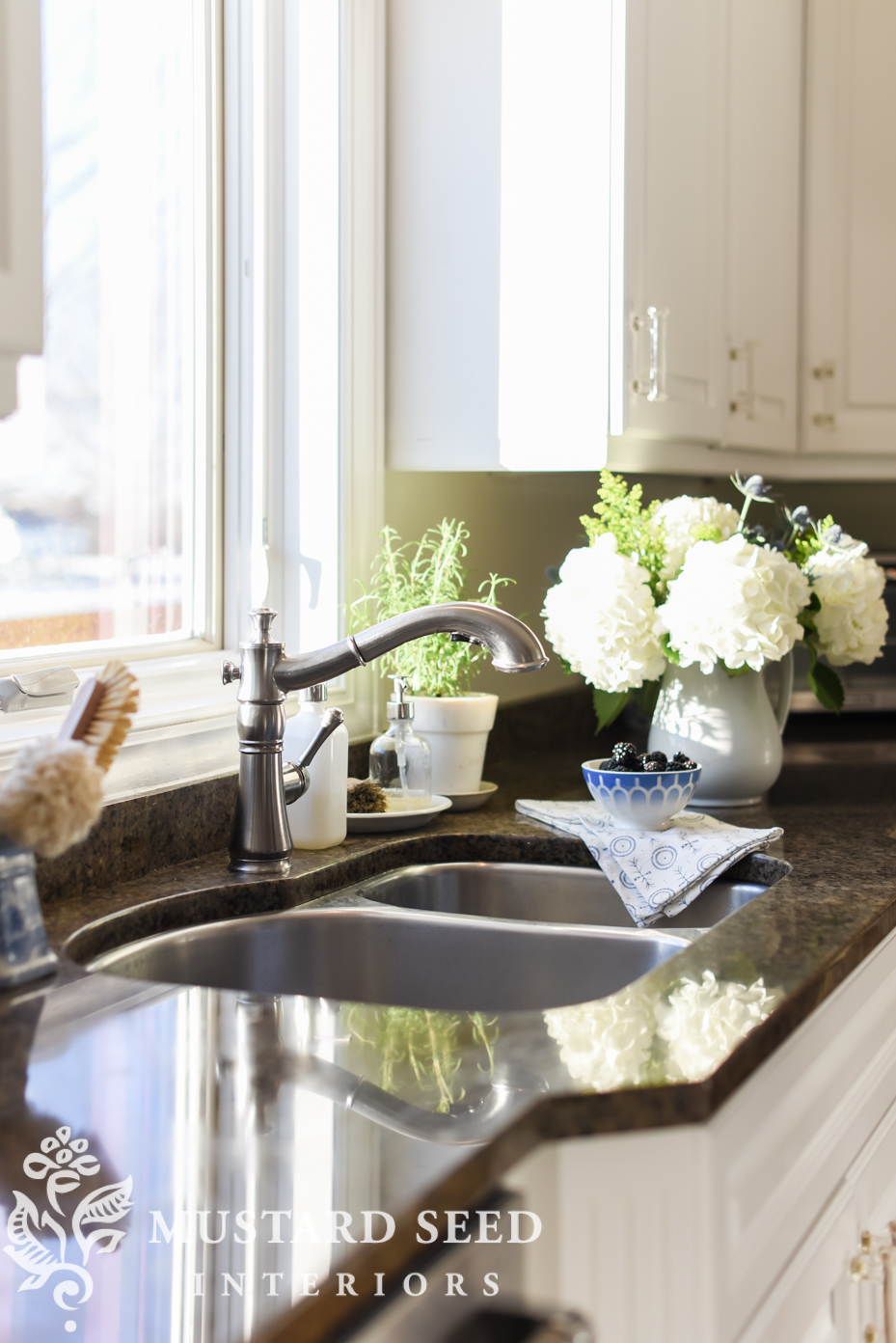 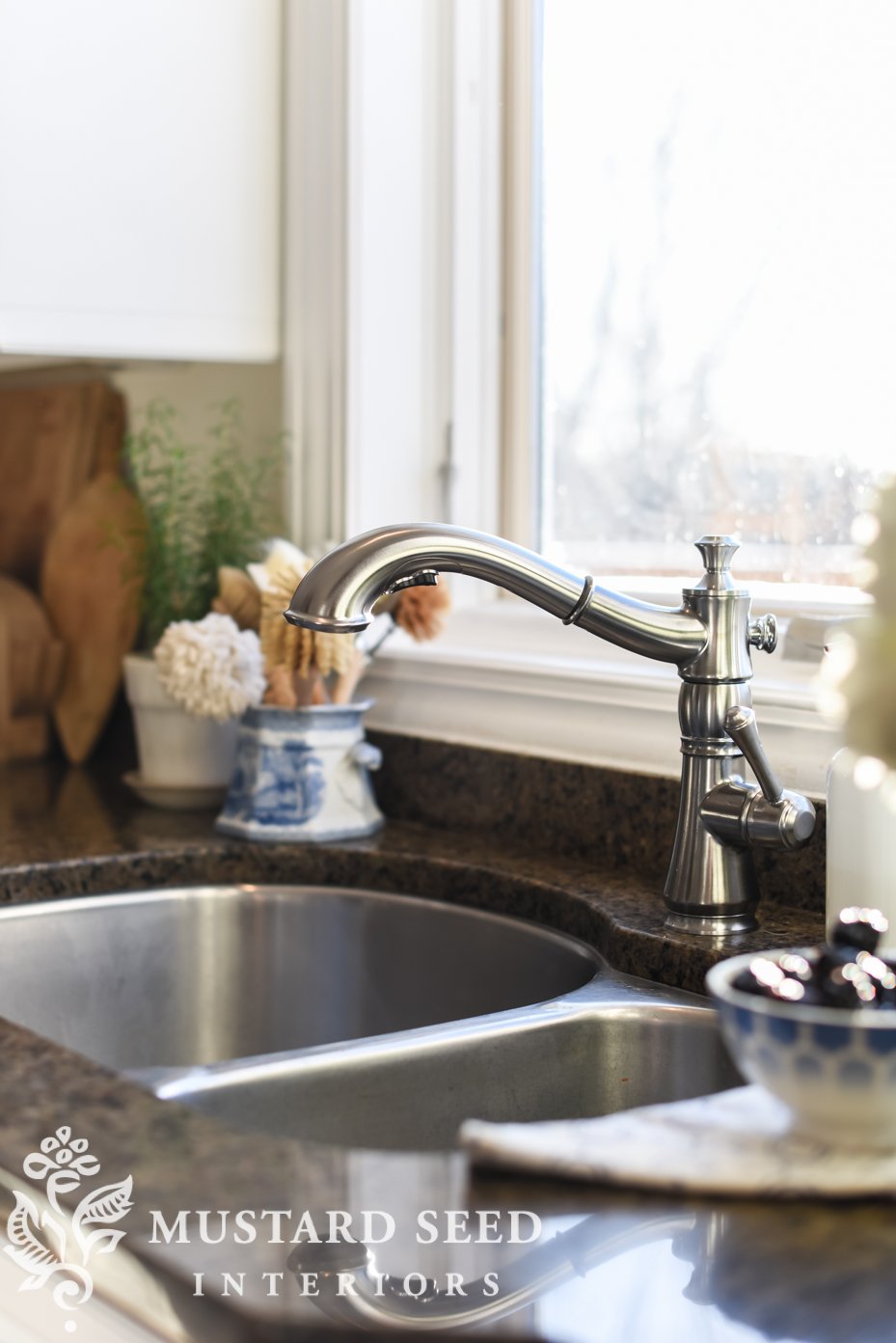 Working on an entire house as a whole, even a room as a whole, can be daunting.  I have felt that a lot over the past few months. There are so many big and little decisions that have to be made and considerations for changes that will be happening down the road.   But finishing small projects, like painting the kitchen shelves and installing a faucet, can keep things headed in the right direction.

I have made my bed daily, though, have spent some time with my art supplies, and I took a pretty picture today… 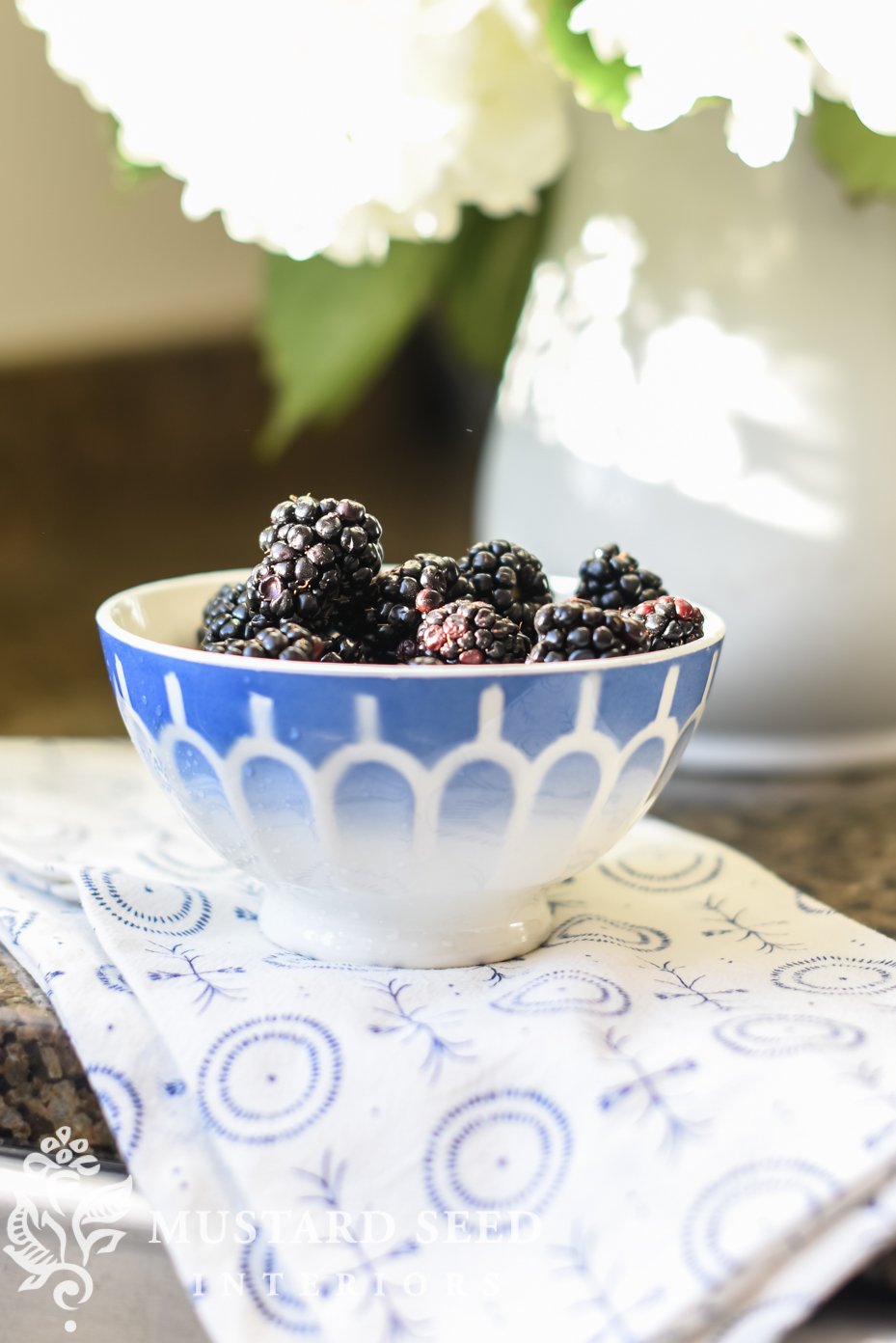