fear is not the boss

Confession time… The last 2-3 years have been a bit of a struggle for me.  Maybe more than a bit, if I’m completely honest.

Before you roll your eyes and wonder what on earth I could be struggling with, hear me out.  (And stick with me, because there is a happy ending.)

The struggle has been an internal one and has been fostered by fear and nurtured mostly in silence.  It crept up with such stealth that it was hard to name or put my finger on.  It was an unexplainable, literal lump in my throat that would manifest itself almost daily.  It was moments of panic that would overwhelm me at times, a sense that things would come crashing down.  It was just a matter of time.

These feelings, all circled around my business and blog and creativity, have made it harder to share with vulnerability, harder to take risks, and harder to cultivate and grow new ideas.

Now, some of you, even many of you, might be scratching your head, because things have chugged along and many new opportunities have come my way that were fully realized.  The blog posts have continued.  Products and books are on the shelves and lines are launched.

But I’m pretty good at plowing ahead and putting on a brave face, but that internal, stupid, annoying struggle has still been tagging along.

I think most of it stems from the thought that it was all just luck.  Luck and timing.  And soon the luck will run out and the time will be up.  It doesn’t matter how hard I work or what I do.  Even as I type it out, it sounds stupid!  I know it does.  But it’s there.  Most anxieties are completely irrational and aren’t grounded in reality in the slightest.

This anxiety came to a peak just a few months before we moved.  Jeff was in a full-time Master’s degree program, so he was only working part time, and that meant our monthly budget (not to mention tuition), fell on my business.  I slowly felt myself looking for a hole to crawl into.  But I couldn’t.  I couldn’t rest and I couldn’t be risky and I couldn’t make a wrong step.  I had to hold my breath and hope that it wasn’t really all hinged on luck and timing.

As an aside, have you ever tried to be creative or enthusiastic when all you want to do is crawl into a hole?  It’s a hard slog.  Things that should bring joy, don’t.  And you want to kick yourself for being so self-pitying when there are people in the world with real problems.  But the lump in my throat is real to me and turns my thoughts inward.

I struggled on, but there was a light at the end of the tunnel.  With his degree almost finished (he graduates in May), Jeff got a full time job.  We moved.  I simplified the business.  Everything would now be alright.

Well, the good news is that the lump in my throat hasn’t returned.  That physical manifestation of my stress has left me alone for months.  I also tripped into oil painting and it’s been revitalizing.  It’s fresh, cold water on a parched day.  There was a reprieve from the struggle. 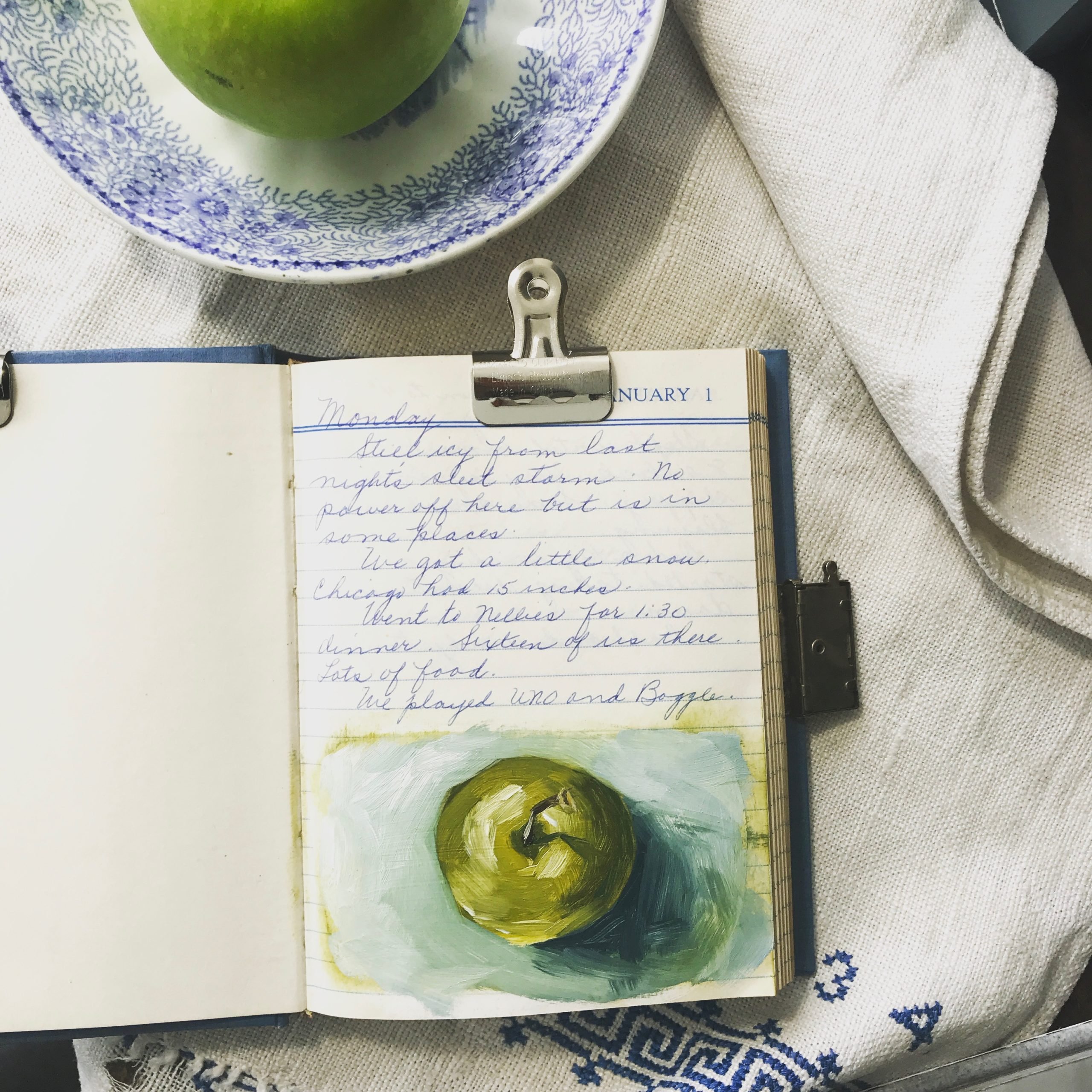 But it’s still been lurking and I’ve known that dealing with it head on was long overdue.

In a creative chat I did with my friend, Shaunna West on Instagram Live (we’ll be doing more if you missed it), while on the subject of fear of failure, I shared that I had more of a fear of success.  I’ve thought about that statement during my creative retreat and I realized it’s only half true.  I’m not afraid of success, but sustaining my success.

You see, for the first few years of my business, there was nowhere to go but up.  Every graph I looked at… profit and loss, analytics, opportunities, page clicks, social media followers, sales, etc. were all on an upward trend.  But then, as the blog world has changed, as the paint world has changed, and as I’ve become more concerned with protecting what’s been built instead of hurling myself joyfully into new things, I’ve experienced plateaus and even dips.  Last year was my most profitable year ever, but it still felt like I was failing, because all of the numbers and statistics weren’t at an all-time high and I had a hard time even acknowledging that I might have something to do with the success. Even after all of the years of consistent growth and opportunity, it still felt like I was probably just in the right place at the right time and I would shrug my shoulders at what my business would look like next year.  I was acting like a passenger.

It’s made me shy away from goals and dreams and new ideas.  The fear of sustaining success forced me into a holding pattern and I felt alone there.  I felt like I couldn’t write it down or share it.  I could only whisper it to those nearest to me.  If it got out, confidence in my brand would be shaken.  I would sound like a total brat.  No one would want to hire me as a designer or writer.  No one would want to invest in my paint line or products.

Fear is always isolating until it’s named and exposed for the stupid thing that it is.

This creative retreat has helped me in so many ways.  It’s going to take weeks to fully digest it and even longer to unpack it all to share here on the blog.  But one of the themes that kept wrapping around me like a warm blanket, like a friend offering me a piece of dark chocolate and her attentive ear, was this… Feeling like this is normal for creative entrepreneurs.  Heck, feeling like this is normal for humans.

Being bombarded with doubt, fear, questions, feelings of inadequacy are all completely normal.  The problem is, I was actually listening to some of them, taking them to heart, and I was making decisions based on those negative feelings.  I was allowing them to permeate my lists of goals, my plans, and my dreams.  I was giving them the reigns for the future.  I was permitting them to sap joy from my successes and enthusiasm from my ventures.

I was definitely getting stuck inside my own head and taking it all way too seriously.  I also wasn’t intentionally taking time to nurture my own creativity, feed my entrepreneurial soul, and just get a good night sleep and some exercise!  If I had taken that time, it probably wouldn’t have gone on as long as it did.  Instead, I just worked longer and harder and exacerbated the burnout and fed the stress.

I know this isn’t going to be an instant turnaround.  I know I have bad habits to break and healthy habits to start.  I know it’s going to take time to implement all that I’ve learned and to retrain myself.  But, I have lists, plans, schedules, and optimism that aren’t subject to fear.  I feel a renewed excitement and enthusiasm for my business, brand, and blog.  I’m moving forward with an inquisitive spirit and hope.

So, why share this?  I have second-guessed just about every word.  But I’m now convinced that it’s important to share.  First of all, it’s cathartic for me.  Even if no one else cares, it’s hit the light of day and there is a freedom in that.

Second, I believe that there is power in testimony.  When someone shares their story, even the parts that are difficult, it can be an encouragement and comfort to others.  One of the best things about the books and podcasts I listened to was hearing stories that were not dissimilar from my own.  Some of them spoke words that, I’m convinced, were just for me.  And I feel like I need to pass that on.

Lastly, I needed a declared turning point; a stake in the ground that I can point back to that says this is why I’ve made the personal and professional changes I’ve made.  Yes, this blog is written for my readers and my business works because I have customers and clients, but I’ve been assuming too much about what everyone wants and doesn’t want from me and those self-imposed assumptions have been burdensome.  I have a whole well of things I haven’t shared, because my fear of the opinion of others has been a tyrannical gatekeeper.

So, now I’m going to take a deep breath and race past that gatekeeper.  I might even do it holding fist-fulls of colorful streamers while singing loudly just to make it clear that I’m not afraid of being caught.  Fear’s not the boss.